Cuba Set to Legalize Buying and Selling of Homes 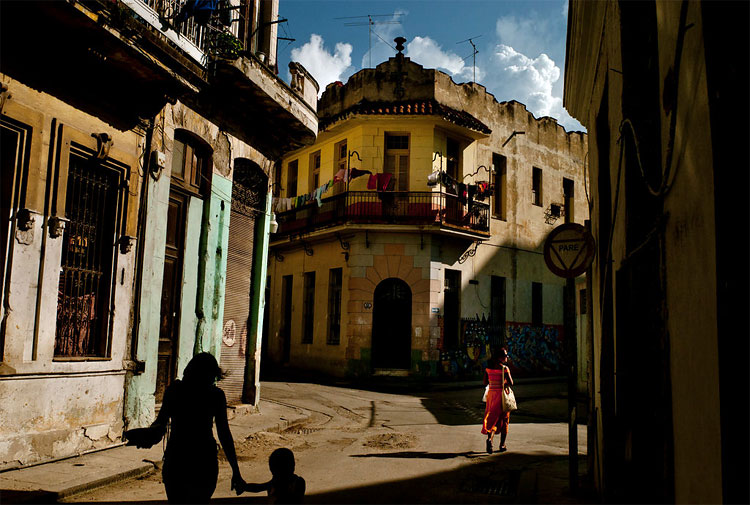 When Cuba legalizes the purchase and sale of property by the end of the year, many citizens expect a cascade of changes: higher prices, mass relocation, property taxes and a flood of money from Cubans abroad. Havana — Havana Vieja is shown here — may be especially affected. (The New York Times) 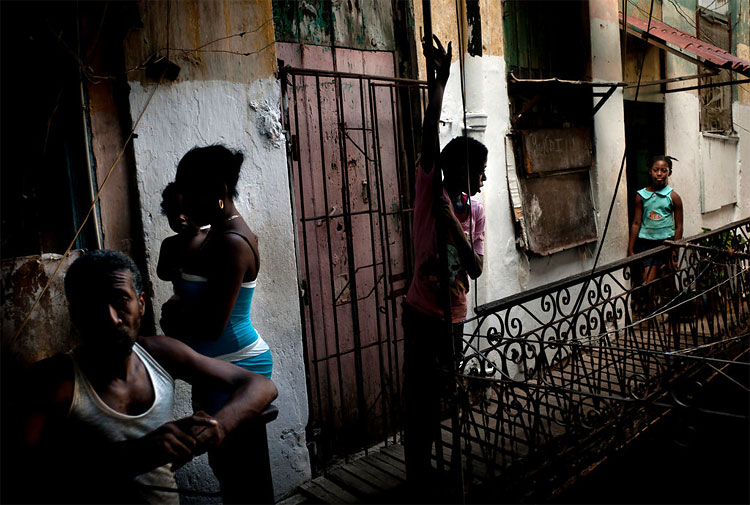 A house divided into apartments in Havana. Private property, of course, is the nucleus of capitalism, so the plan to legitimize it here in a country of slogans like “socialism or death” strikes many Cubans as jaw-dropping. (The New York Times) A mother slept with her child in the living room of her cramped apartment in Havana. Cuba struggled with poor housing even before the 1959 revolution, but deterioration, rigid rules, and creative work-arounds have created today’s warren of oddities. (The New York Times) 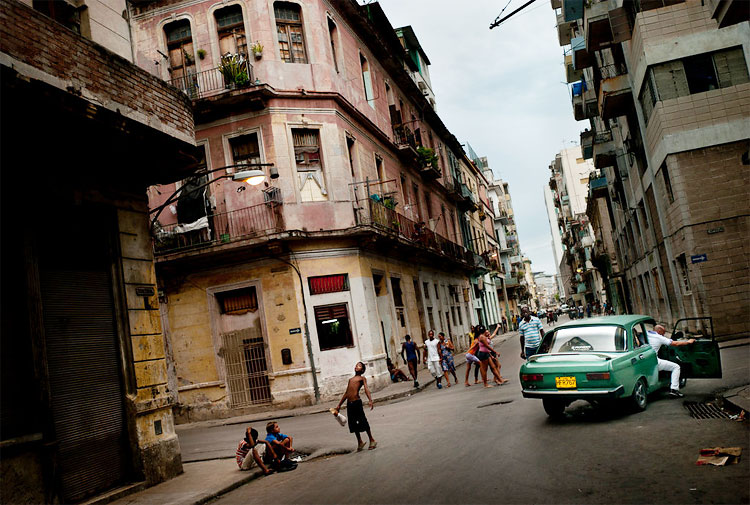 When owning private property is legalized, Cubans would be limited to one home or apartment, and full-time residency would be required. Yet even with some state control, experts say that the property sales could transform Cuba more than any other economic reform announced by the government of Raul Castro. (The New York Times) 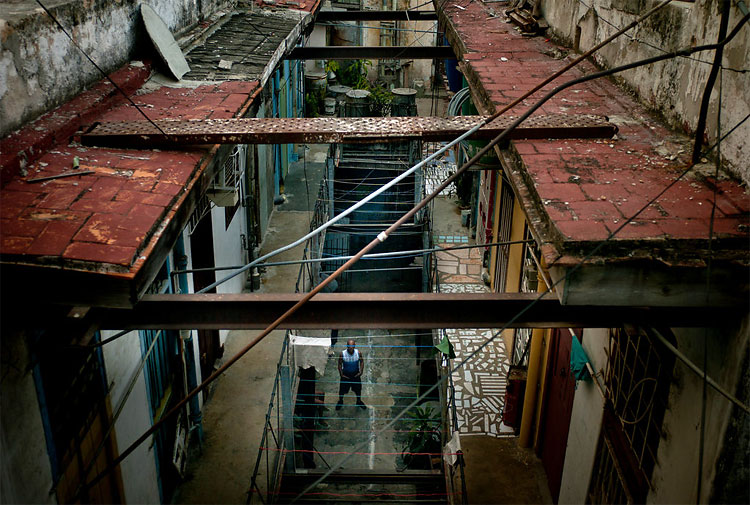 Some Cubans expect rules forcing buyers to hold properties for 5 or 10 years. Others predict that the government will make it hard to take their profits off the island, either with exorbitant taxes or limits on currency exchange. Still more cannot imagine a real open market to begin with. (The New York Times) 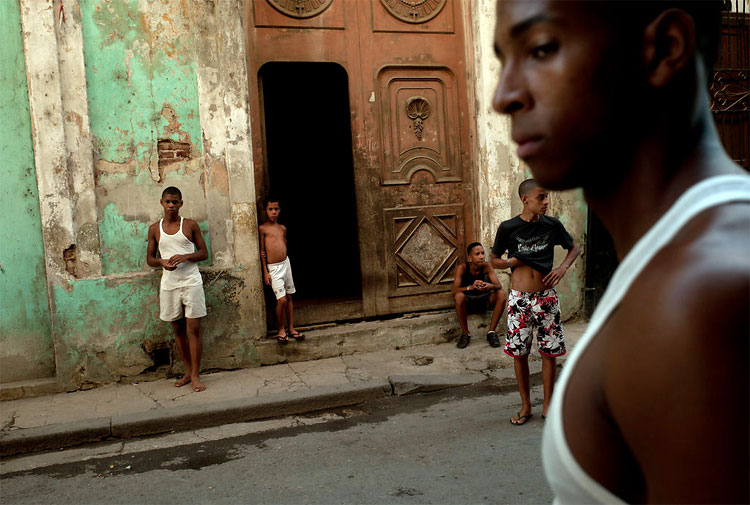 A crumbling building in Havana. Private property ownership would likely mean economic growth for the island. Profits from sales would encourage much-needed renovation, which would create jobs. Banking would expand because, under rules outlined this week, payments would have to come from buyers’ accounts. The government, meanwhile, would pull in taxes, impossible in the current swapping market where money passes under the table. (The New York Times) 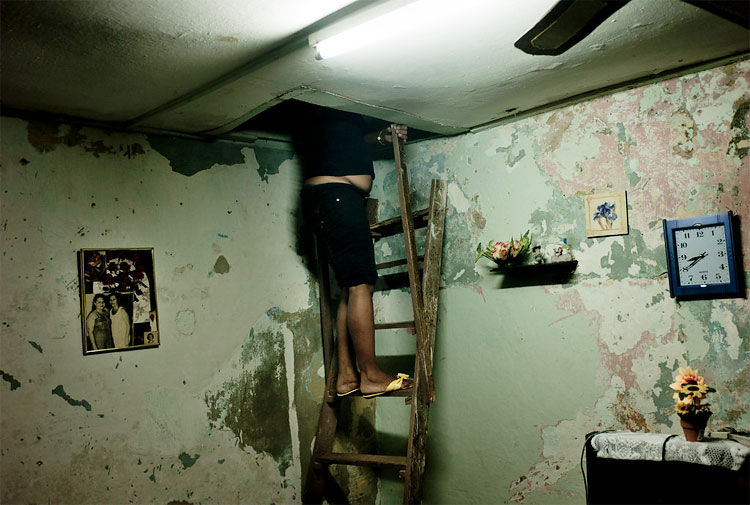 A woman climbed the stairs to a small room built on top of the main room of her apartment in Havana. Many residents have subdivided apartments to Alice in Wonderland proportions. (The New York Times) 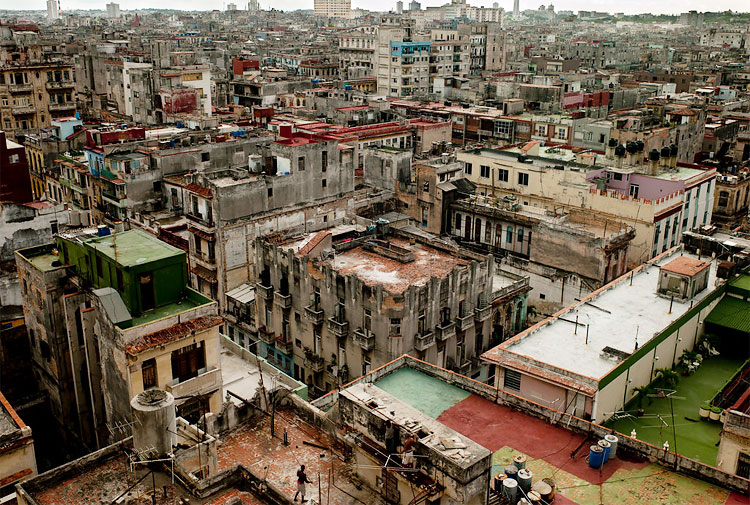 A recent study found that Cuba has a housing deficit of 1.6 million units. The government says the number is closer to 500,000. Either way, it’s a serious problem. (The New York Times) 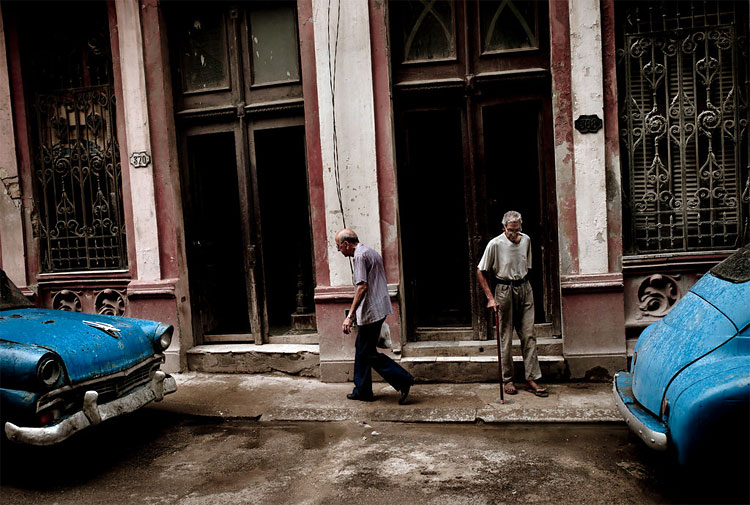 For now, Cubans are mostly trying to grasp the basic details of private property. How will the mortgage system work? How high will the taxes be? How can one know what’s a fair price? (The New York Times) 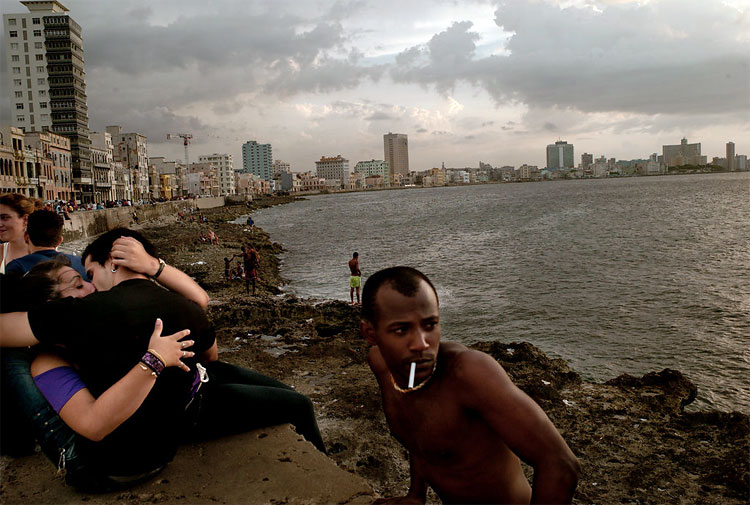 The Malecón, a road and seawall around Havana’s waterfront. With the buying and selling of property, an influx of cash from Cuban-Americans could push Cuba to accelerate reform and might push the United States to moderate its policies toward the island. (The New York Times) 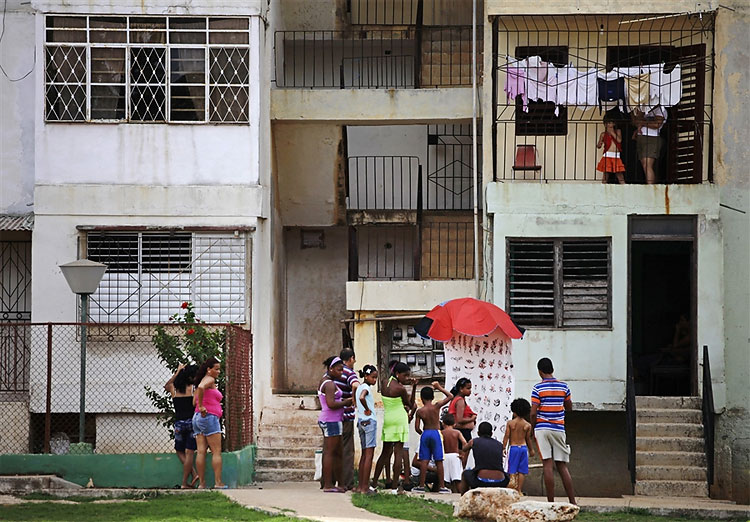 People look at removable tattoos for sale at a soviet-era apartment block in Havana July 3. Cuba will authorize limited housing and car markets by 2012, the Communist party newspaper Granma said on Friday, a move awaited by local residents since the early 1960s when home and most auto sales were banned. Granma, reporting on a recent meeting of top level party, government and other officials, said Cubans would still be prohibited from owning more than one home. But for the first time, they could buy and sell the dwellings with minimal government interference. (Desmond Boylan / Reuters) 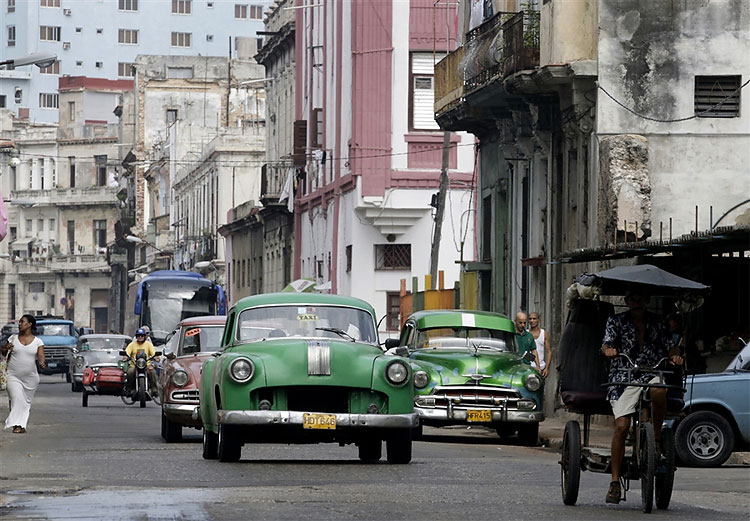 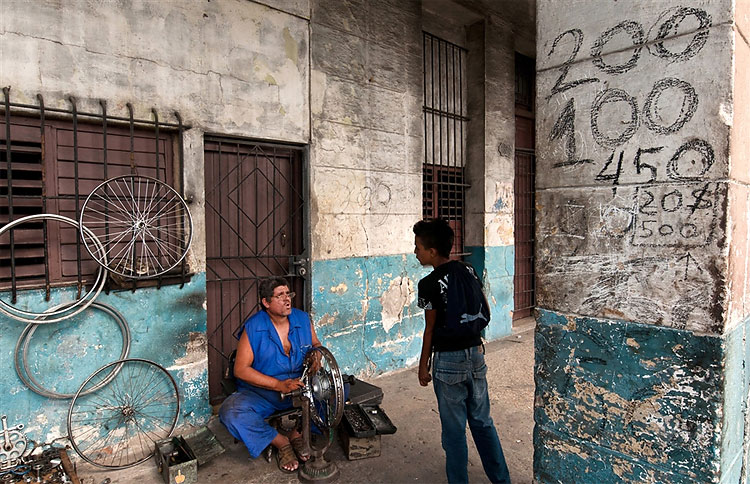 Cuban self-employed Lorenzo Conejo fixes a bicycle wheel’s spokes in front of his house, on June 21 in Havana. Many Cubans make their business using any tools or workspace available in an effort to adapt to the the new economic rules. (AFP – Getty Images) 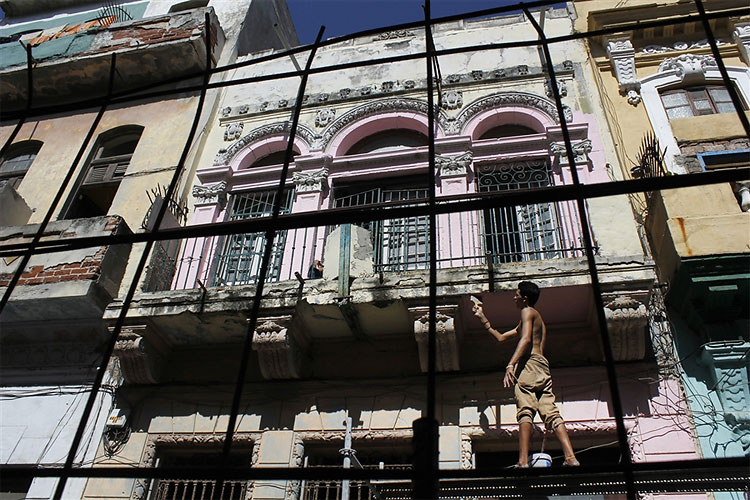 A man repairs his house in Havana July 13. Cuba has begun lifting restrictions on individual economic activity earning applause from local residents even as the moves stoke anger over why the prohibitions existed in the first place and the many that remain. President Raul Castro has loosened regulation since taking over for his ailing brother Fidel as he moves Cuba’s Soviet-style economy in a more market friendly direction and battles the paralyzing and often corrupt bureaucracy and black market it has fostered. (Reuters) 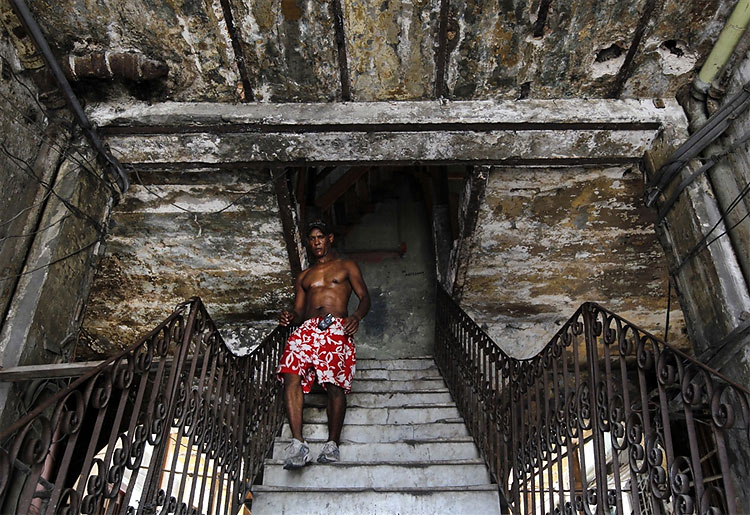 A man goes down stairs of his house in Havana July 1. (Enrique De La Osa / Reuters)