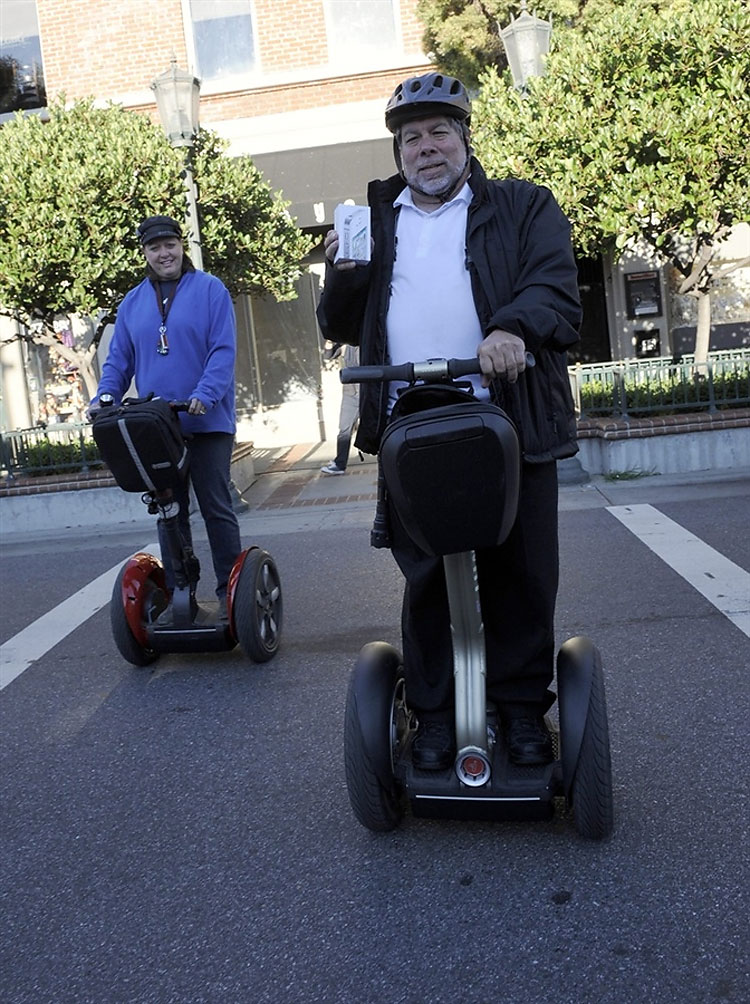 Apple co-founder Steve Wozniak and his wife, Janet ride out on their Segways while Steve holds up his new Apple iPhone 4S outside the Apple store in Los Gatos, California, USA 13 October 2011. Wozniak, who ended his full-time employment with Apple in 1987 , is a shareholder, still receives checks from Apple and maintains his status as employee No. 1. Wozniak co-founded Apple with Steve Jobs who recently passed away. (John G. Mabanglo / EPA) 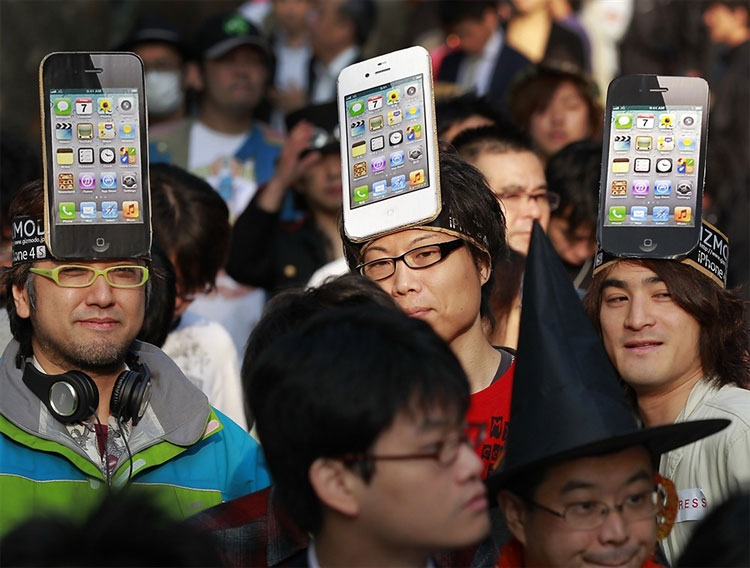 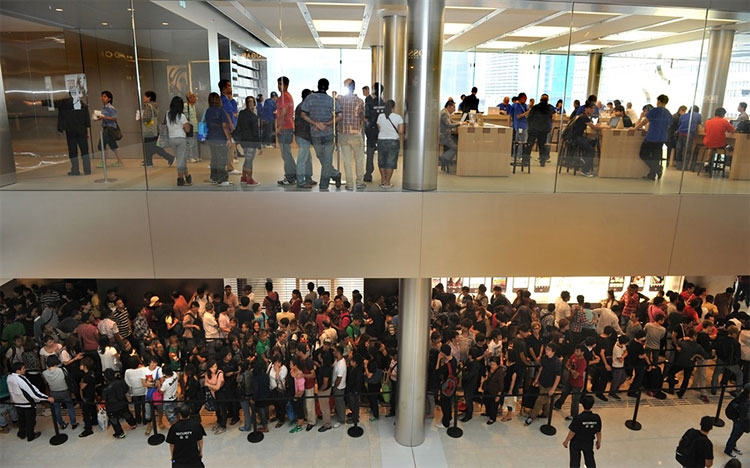 People queue outside the Apple store to purchase discounted iPhone 4’s in Hong Kong on October 14, 2011. Tensions were high at Apple’s plush new harbourside store in the Chinese territory as people queued to buy a maximum of five iPhone 4’s at a time, sometimes only to hand them over to “friends” outside the store and try to return for more. (Laurent Fievet / AFP – Getty Images) 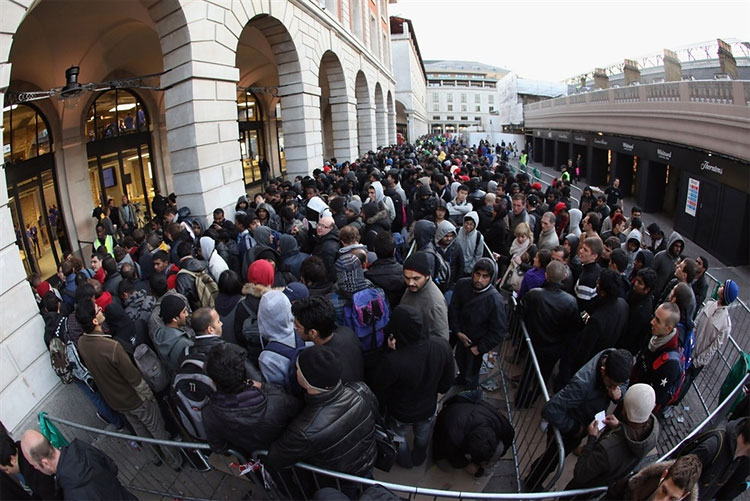 Customers queue outside the Apple store in Covent Garden to buy an iPhone 4S on October 14, 2011 in London, England. The widely anticipated new mobile phone from Apple has seen customers queue in cities around the world for hours to be amongst the first to buy the device. (Oli Scarff / Getty Images) 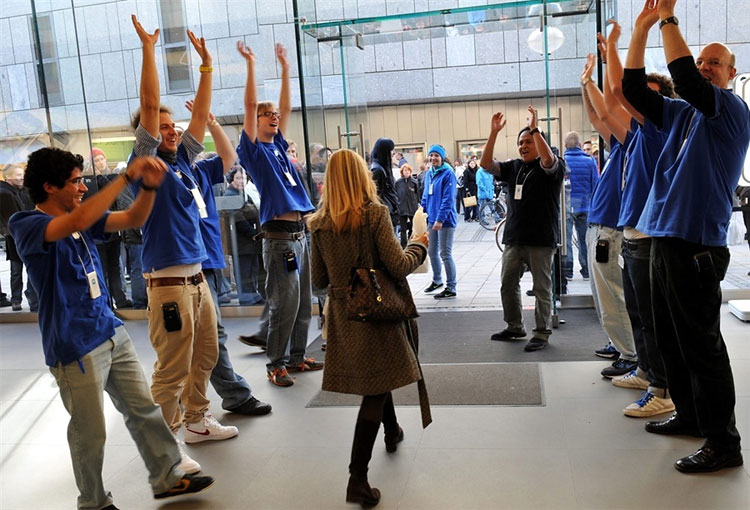 Apple employees applaud a cutomer who has purchased the new iPhone 4S at an Apple store in Munich, Germany on Oct. 14. Apple Inc’s new iPhone went on sale in stores across the globe 14 October. Reports state that thousands queued to get the final gadget unveiled during Steve Jobs’ life. Similar queues waited at Apple stores in Sydney, Tokyo, Paris and London as fans gathered to get their hands on the iPhone 4S. (Frank Leonhardt / EPA) 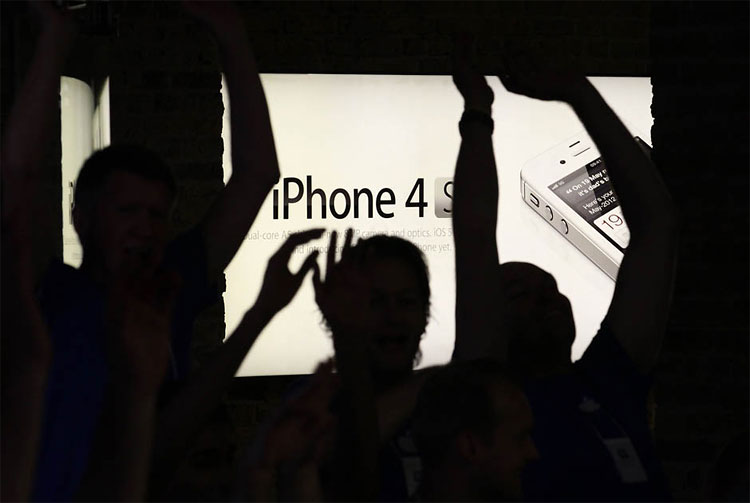 Apple employees celebrate as they open the doors to customers in Covent Garden, London October 14, 2011. Apple Inc’s new iPhone went on sale in stores across the globe on Friday, with fans snapping up the final gadget unveiled during Steve Jobs’ lifetime, many buying the phone as a tribute to the former Apple boss. (REUTERS/Suzanne Plunkett) 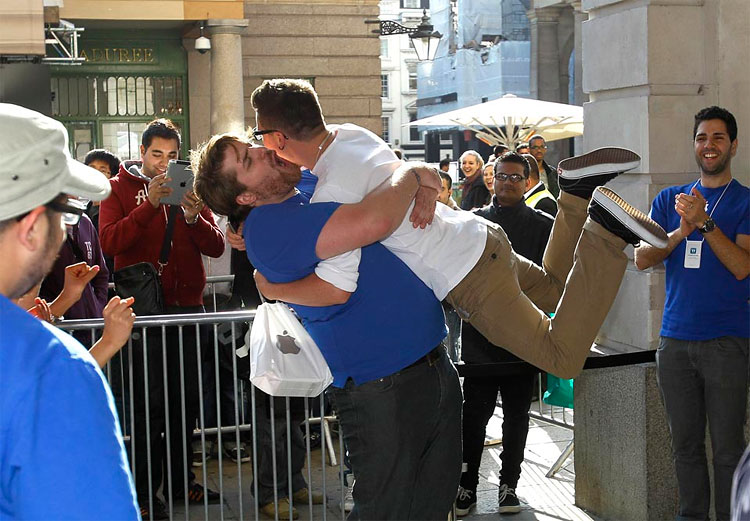 A customer jumped into the arms of an Apple employee outside the Apple store in Covent Garden in London Friday to celebrate his purchase of the new iPhone 4S, which went on sale in the U.K., U.S., Canada, Australia, France, Germany and Japan Friday. (Kirsty Wigglesworth/Associated Press)

sQuba - Underwater Concept Car
Amazing Photos Of “Luxurious” Lada Stretched Limousines
Let's Look Inside A Doomsday Global Seed Vault On Spitsbergen, Norway
Inside Facebook’s Menlo Park Headquarters
A Broken Vintage Piano Turned Into A Unique Analog Hybrid Of 20 Instruments Connected To The Piano Keys
Computer Love: The Ultimate Guide To Computing
This Russian Flying Kamikaze Tesla Car Is Real And Waiting For The Passengers
The Impressive Cyberpunk Accessories Of Hiroto Ikeuchi
An Apple-Inspired Concept Smart Home Hub That Looks And Feels Like A Cat
Concepts From Future Past: Autobianchi Runabout
This Small Artificial Island Is Thought Of As An Oasis Of Relaxation
Louie Mattar’s Cadillac, the Car That Has Everything, 1952
Chinese Men Build Homemade Airbus A320 Passenger Jet
Quirky And Daring: Best Soviet Concept Cars
This Starry LED Scarf Will Light Up The Universe Around You
A.I. Helps To Answer What The Kids Of Famous Fictional Couples Would Look Like
This Bolivian Student Built The Wall-E Robot Using Materials He Obtained From A Local Rubbish Dump
Belgian Designers Have Created A Canoe For Two That Folds Away Into A Box
Superb Yamaha Swan-Like Scooter With Insect Wings Will Make You Feel Like Flying
Artist Signe Pierce Explores The Chaotic Beauty Of Reality And Its Natural Tefractions
Mechanical Secrets of Moving Gorillas in "King Kong", 1933
A Neural Network Invented A Bunch Of New Paint Colors That Are Hilariously Wrong
The Light Phone
Coolest Designed Products Of 2016
Pokemon Go Craze In South Korea
Electric Dreams: Amazing Portraits Of ’80s Geeks
Pirate-Themed Scanner A Hit At NYC Hospital
Toyota Has Made A New Concept Car Out Of Wood
A $2 Million Porsche-Designed RV Has A Full Bedroom And Bathroom
Collider Exhibition at the Science Museum in London
around, buying, iphones, world