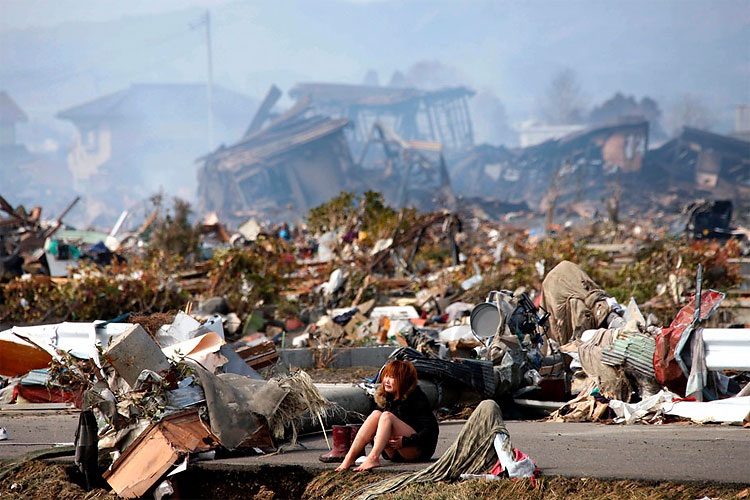 From the uprisings across the Arab world to the devastating earthquake, tsunami and nuclear disaster in Japan, there was no lack of news in 2011. Reuters photographers covered the breaking news events as well as captured more intimate, personal stories. In this showcase, the photographers offer a behind the scenes account of the images that helped define the year.

Here: A woman cries while sitting on a road amid the destroyed city of Natori, Miyagi Prefecture in northern Japan March 13, 2011, after a massive earthquake and tsunami. )REUTERS/Toshiyuki Tsunenari/Asahi Shimbun) 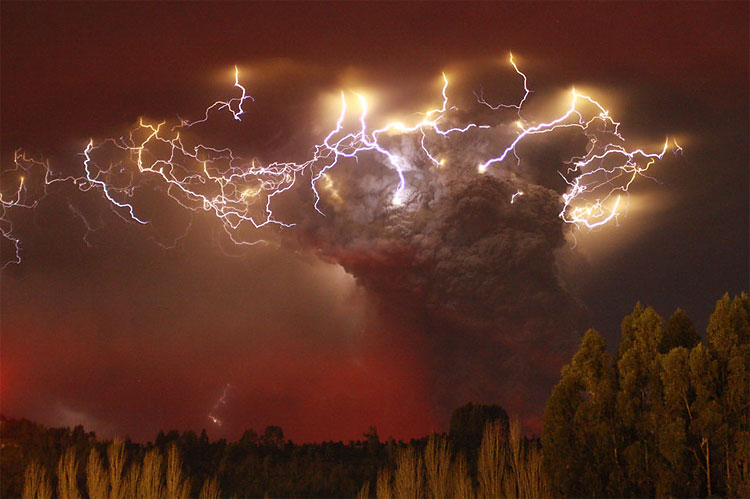 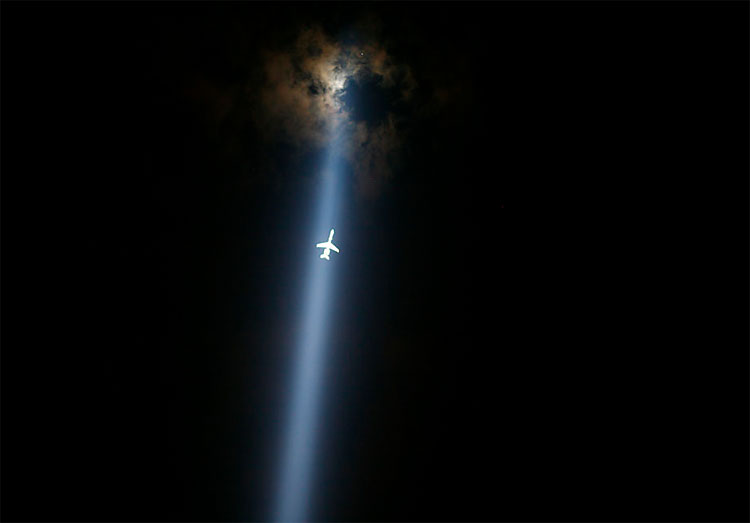 A plane flies through the “Tribute in Lights” in lower Manhattan in New York September 10, 2011. (REUTERS/Eric Thayer) 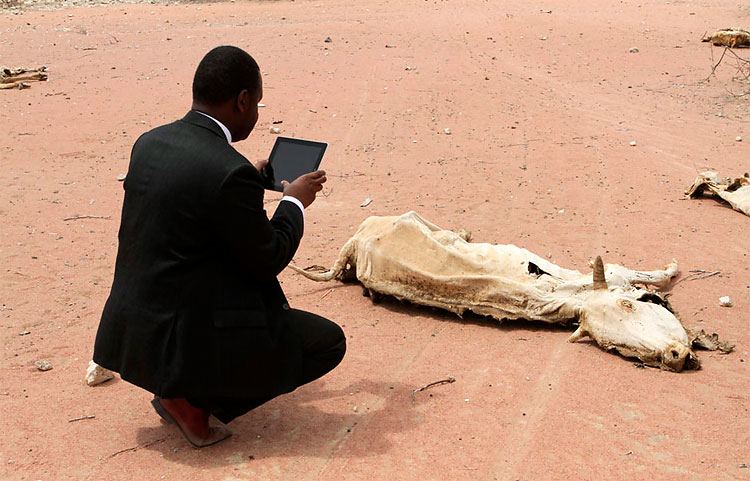 An aid worker using an iPad films the rotting carcass of a cow in Wajir near the Kenya-Somalia border, July 23, 2011. (REUTERS/Barry Malone) 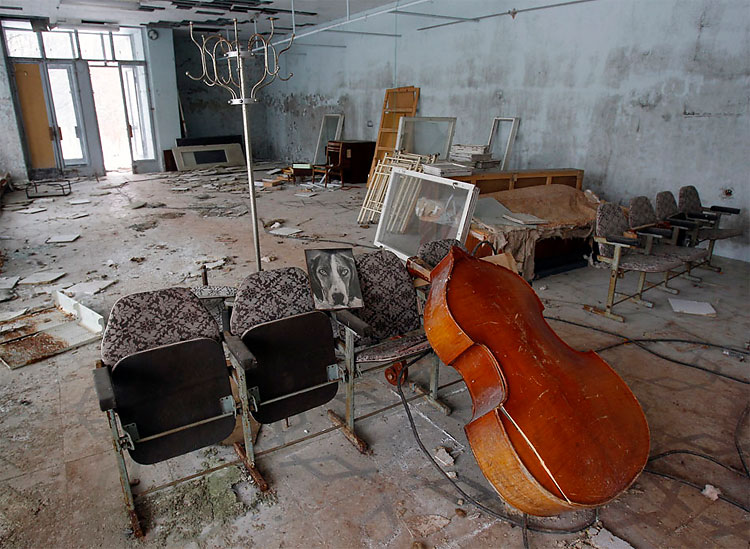 An interior view of a building in the abandoned city of Prypiat near the Chernobyl nuclear power plant in Ukraine is viewed February 24, 2011. (REUTERS/Gleb Garanich) 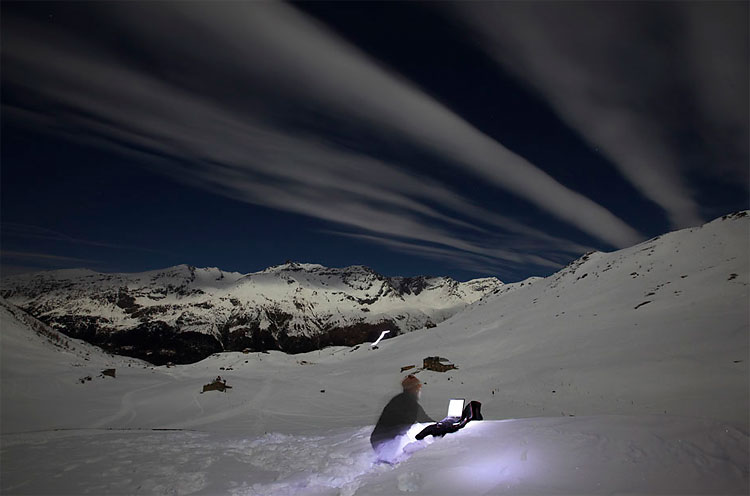 Switzerland’s photographer Denis Balibouse files his pictures under a full moon sky from Mont-Cenis Pass Road in Lanslebourg during the Grande Odyssee sled dogs race January 19, 2011. This picture was taken with a long exposure. (REUTERS/Denis Balibouse) 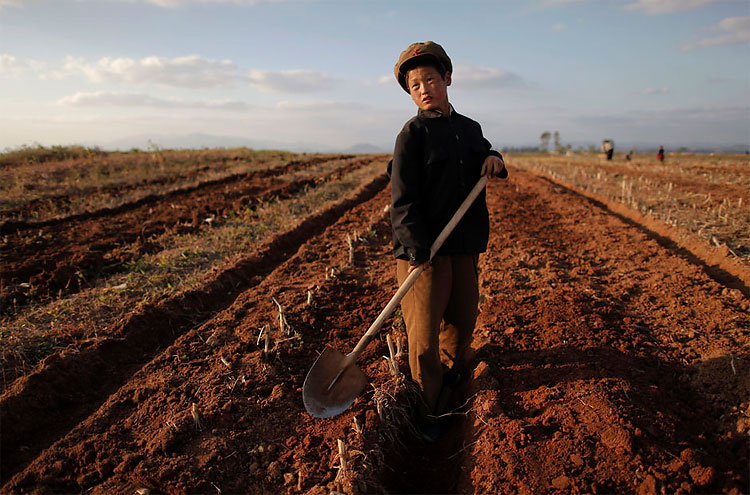 A North Korean boy works in a field of a collective farm in the area damaged by summer floods and typhoons in South Hwanghae province September 30, 2011. (REUTERS/Damir Sagolj) 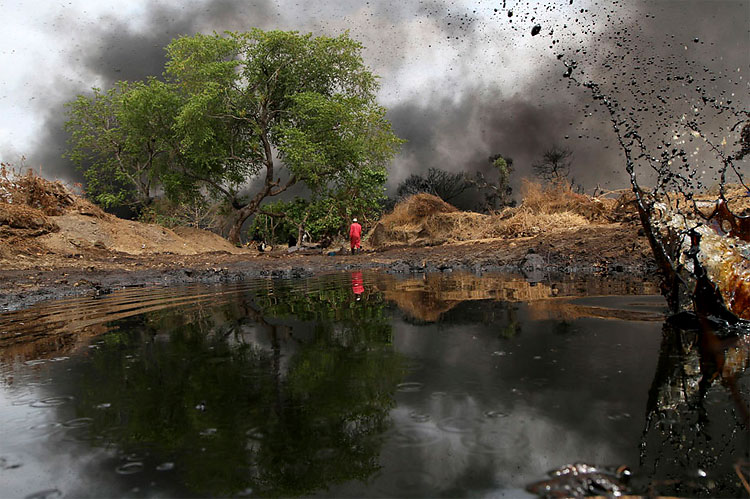 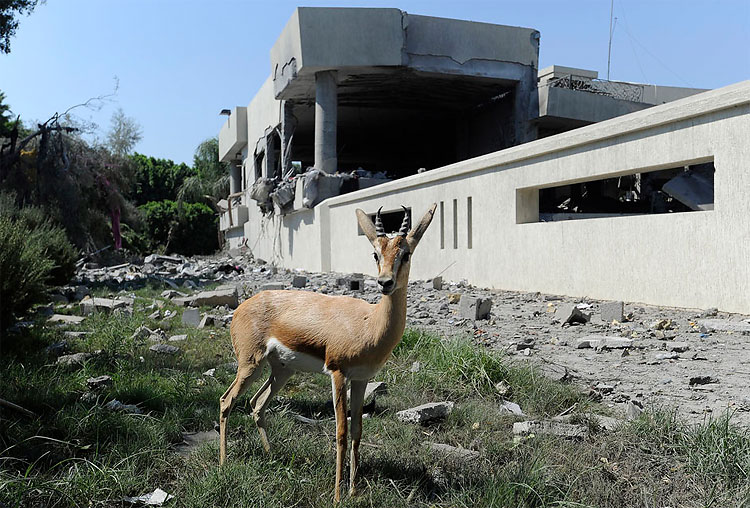 A gazelle stands in what local residents say is the bombed out ruins of the compound of Abdullah Al-Senussi, head of the Libyan Intelligence Service and brother in law of Muammar Gaddafi in Tripoli August 19, 2011. (REUTERS/Paul Hackett) 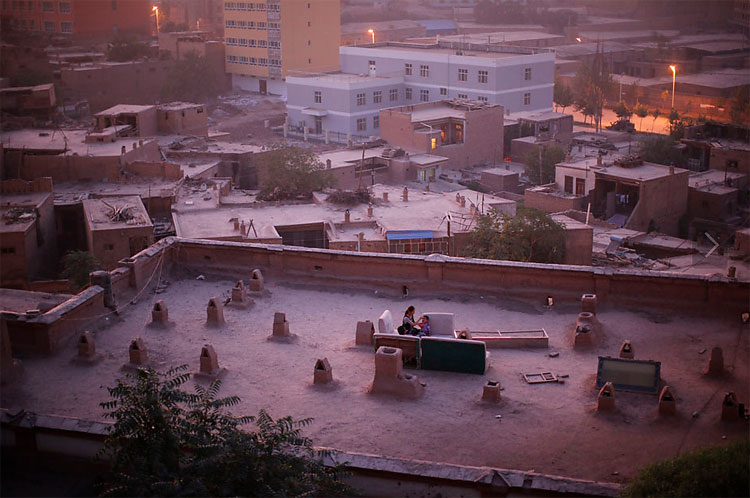 An Uighur ethnic woman feeds her son on the roof of their house in Kashgar, Xinjiang province August 2, 2011. Chinese security forces blanketed central areas of Kashgar city in the western region of Xinjiang, days after deadly attacks that China blamed on Islamic militants highlighted ethnic tensions in the Muslim Uighur area. (REUTERS/Carlos Barria) 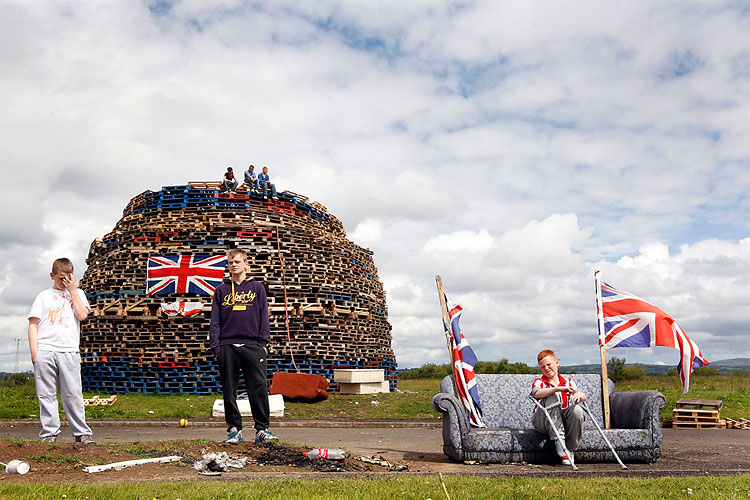 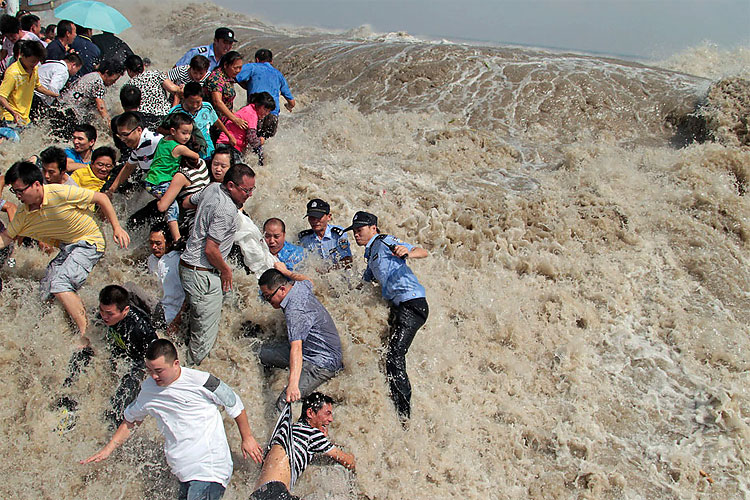 Policemen and residents run as waves from a tidal bore surge past a barrier on the banks of Qiantang River in Haining, Zhejiang province August 31, 2011. As Typhoon Nanmadol approaches eastern China, the tides and waves in Qiantang River recorded its highest level in 10 years, local media reported. (REUTERS/China Daily) 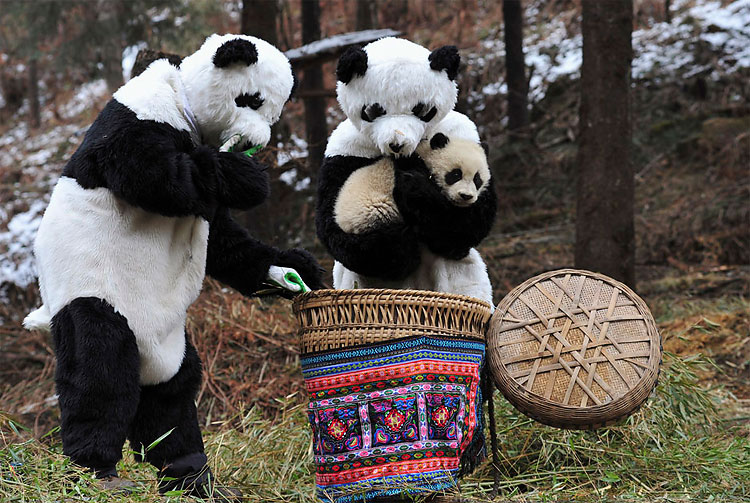 Researchers dressed in panda costumes put a panda cub into a basket before transferring it to a new living environment at the Hetaoping Research and Conservation Center for the Giant Panda in Wolong National Nature Reserve, Sichuan province February 20, 2011. The 6-month-old cub is being transferred to a bigger living environment with a higher altitude and a more complicated terrain, which marks the beginning of the second phase of its training to reintroduce it to the wild. Researchers wear panda costumes to ensure that the cub’s environment is devoid of human influence. (REUTERS/China Daily) 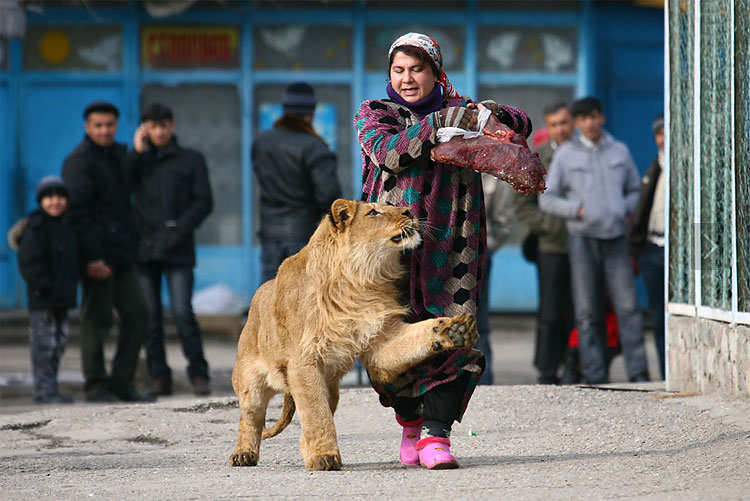 Zukhro, an employee of the city zoo, walks with Vadik, an 18-month-old male lion, on the territory of the zoo in the capital Dushanbe, January 20, 2011. Employees take the lion from its cage to have a promenade along the territory two times a week while holding a piece of meat to attract Vadik’s attention so it walks nearby. (REUTERS/Nozim Kalandarov)