Winter 2012: Beautiful Images of Snow-Clad Places from across the World 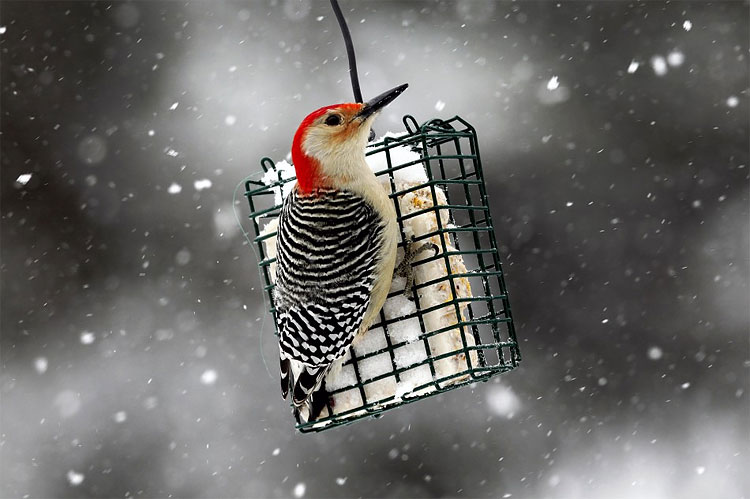 A Red-bellied Woodpecker perches on a suet feeder during a winter storm in the village of Nyack, New York, Jan. 21, 2012. The first major winter storm of 2012 to hit the northeast U.S. was expected to drop up to eight inches of snow on the region. (REUTERS/Mike Segar) 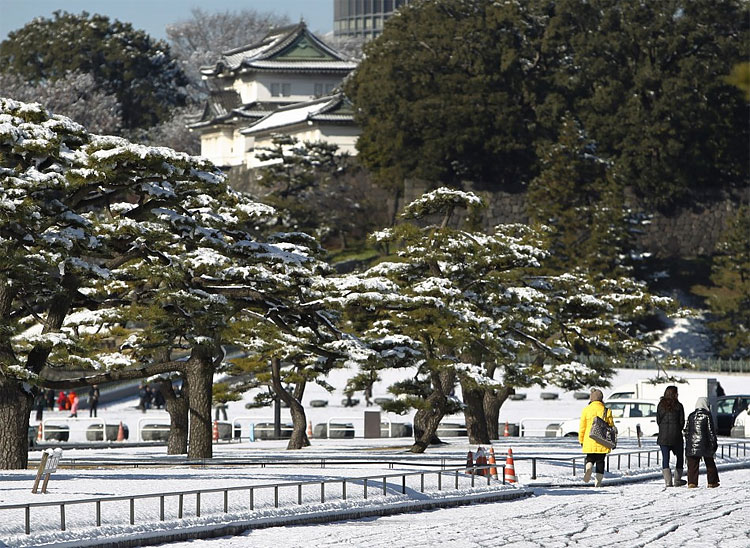 People walk near the Imperial Palace covered with snow in Tokyo Jan. 24, 2012. Snow fell in Tokyo and its vicinity on Monday night throughout early Tuesday morning, and covered the capital for the first time this season, local media reported. (REUTERS/Toru Hanai) 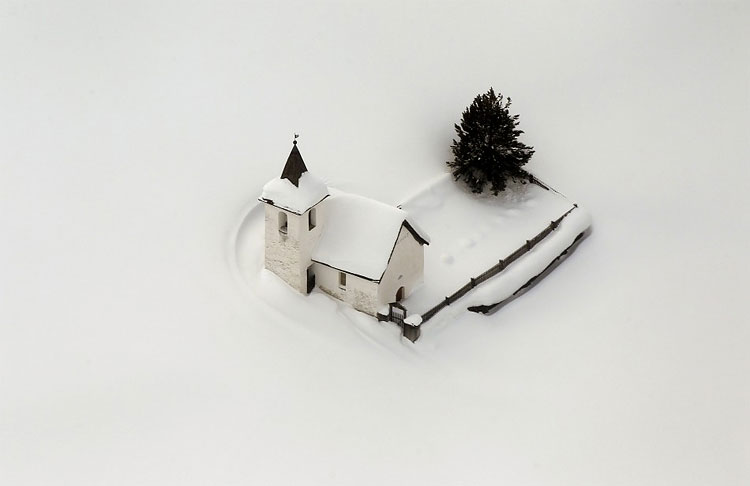 An aerial view shows the snow covered church of the village of Jenisberg near the Swiss mountain resort of Davos Jan. 23, 2012. (REUTERS/Arnd Wiegmann) 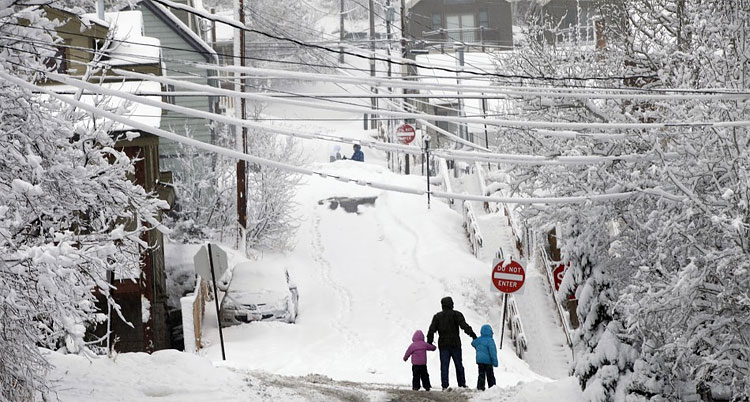 A man and children walk during snowfall at the Sundance Film Festival in Park City, Utah Jan. 21, 2012. (REUTERS/Mario Anzuoni) 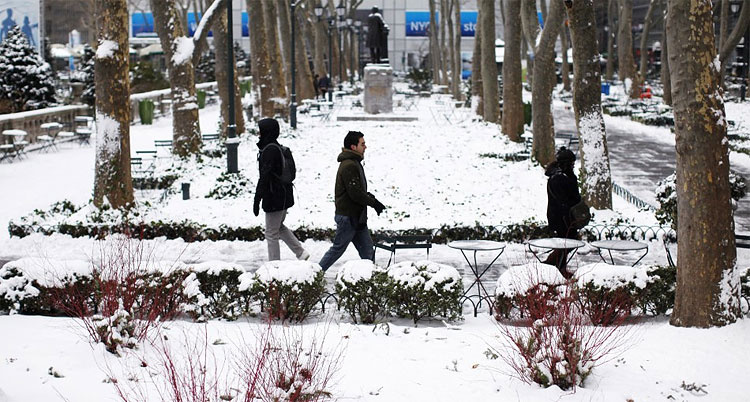 People walk at Bryant Park during a snow storm in New York Jan. 21, 2012. Snow lovers in the northeast finally got what they have been waiting for Saturday morning, with a fast-moving storm bringing 3 to 7 inches from central Pennsylvania to Connecticut. For many areas away from the Great Lakes, this will be the heaviest snowfall since a storm in late October. (REUTERS/Eduardo Munoz) 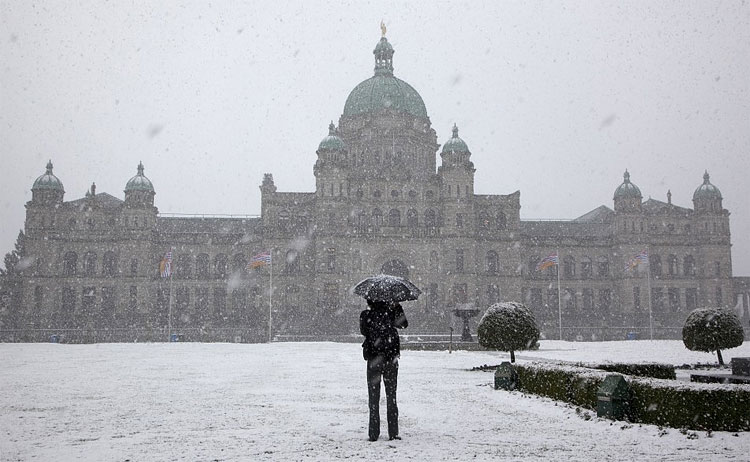 A passer-by stops to take a picture at the provincial legislature during a heavy snowfall in Victoria, British Columbia Jan. 17, 2012. A city that rarely sees any snow during their mild winter months has been blanketed in white cover. (REUTERS/Andy Clark) 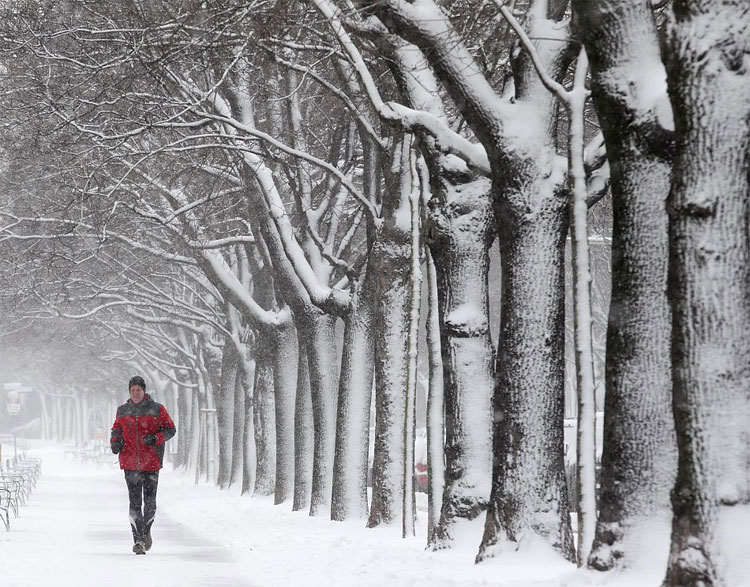 A jogger runs along a street during snowfall in Vienna, Jan. 17, 2012. (REUTERS/Heinz-Peter Bader) 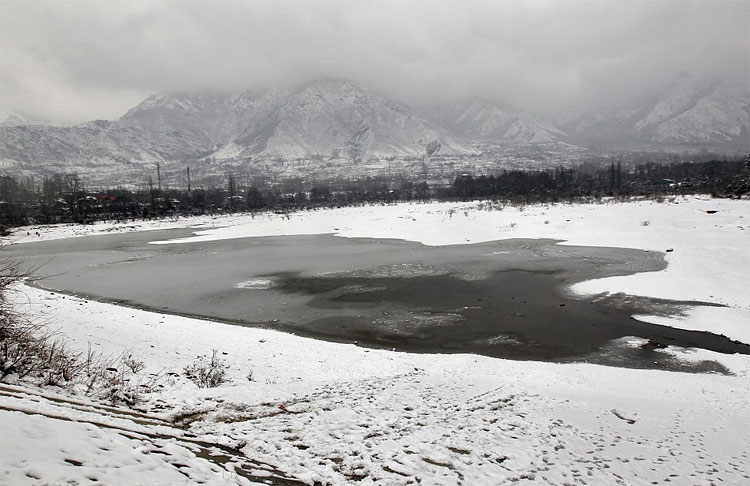 A view shows the semi-frozen layer of a water reservoir on a cold day on the outskirts of Srinagar Jan. 12, 2012. An intense cold wave is sweeping through Kashmir region after a recent snowfall which dipped the day temperatures to minus 2 degree Celsius and night temperatures to minus 5.5 degrees Celsius, local media reported. (REUTERS/Fayaz Kabli) 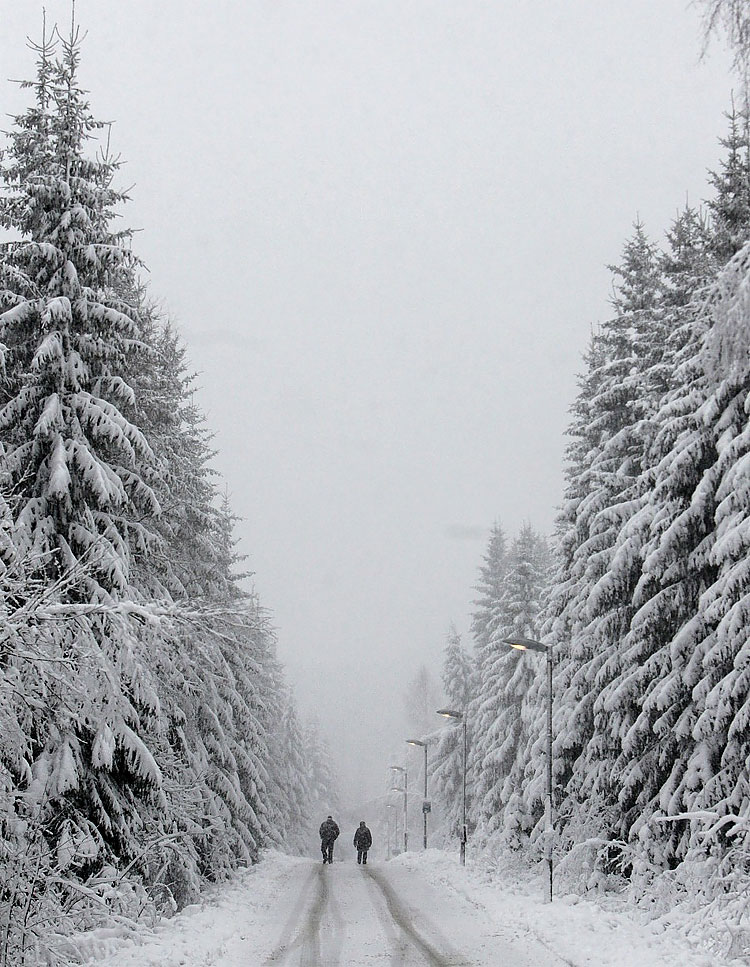 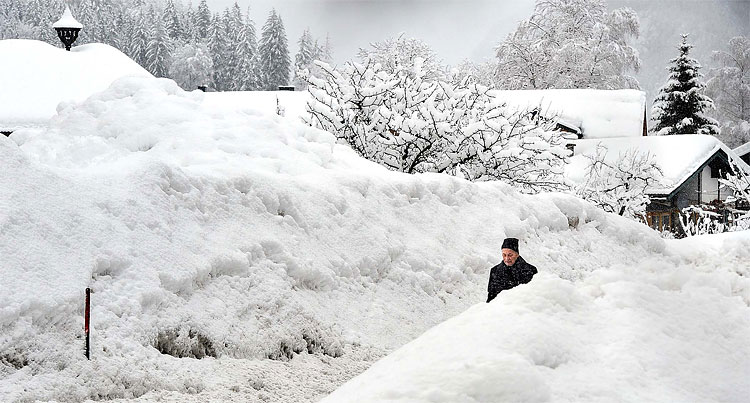 A man walks through snow in Lofer, Austria. Heavy snowfall caused traffic problems in many parts of Austria, causing a higher risk of avalanches in alpine regions. (Kerstin Joensson/Associated Press) 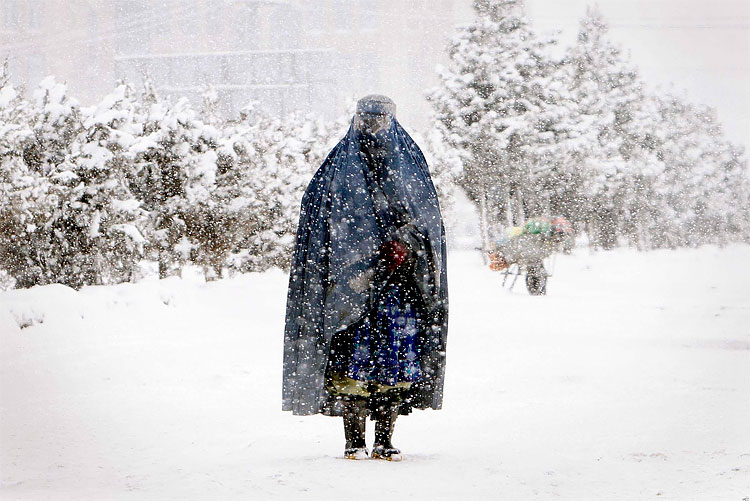 A woman waits for alms during a snowstorm in Kabul, Afghanistan. (Musadeq Sadeq/Associated Press) 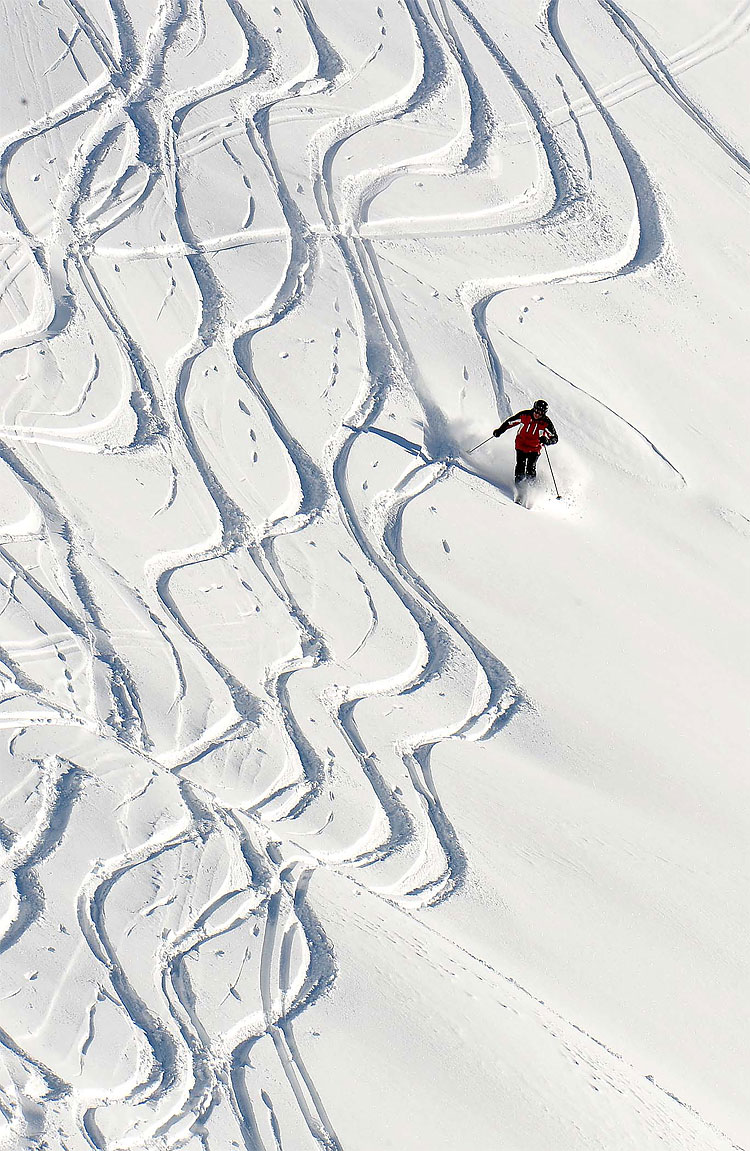 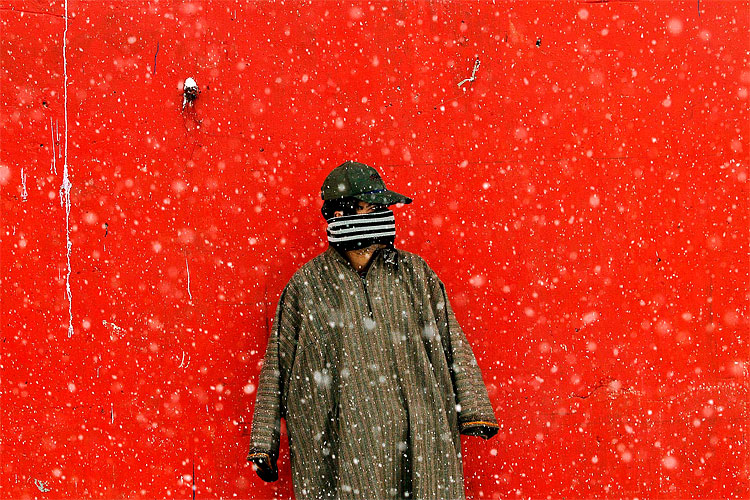 A Kashmiri man waits for transport during a snowfall on a cold day in Srinagar, India. Snowfall in the Indian portion of Kashmir has disrupted power and road traffic between Srinagar and Jammu, the summer and winter capitals of India’s Jammu-Kashmir state. (Mukhtar Khan/Associated Press) 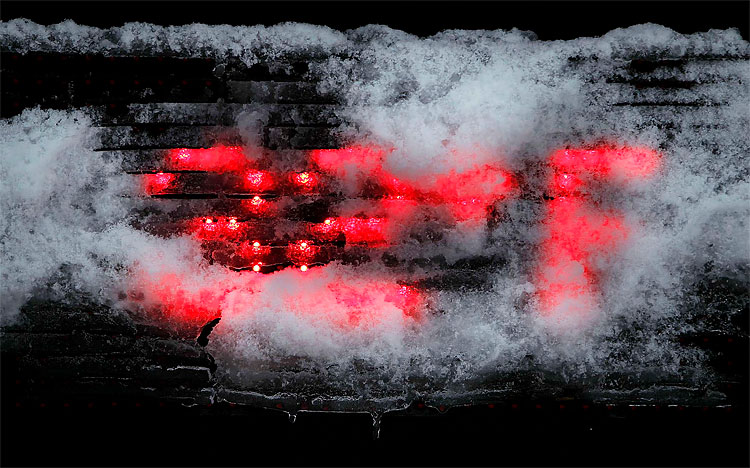 Glowing through a covering of snow, a readerboard in front of the Creswell Middle School in Creswell, Oregon displays the temperature as it hovers at the freezing point. (Chris Pietsch/The Register-Guard) 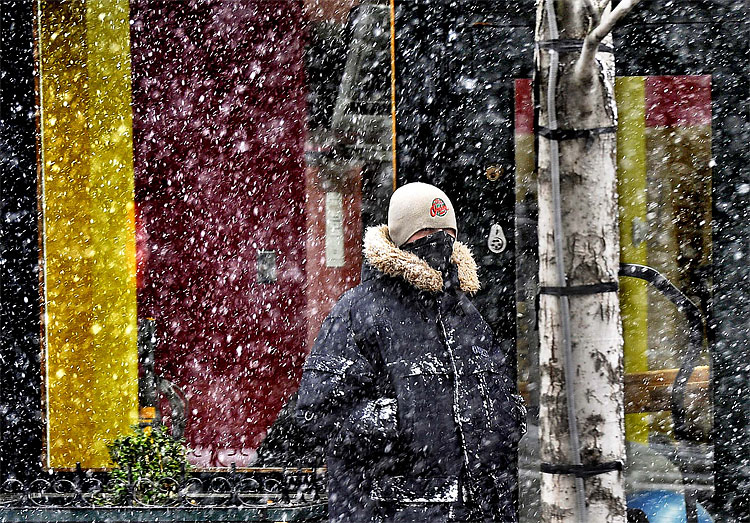 A pedestrian makes his way though the snow in downtown Spokane, Washington. (Dan Pelle/Spokesman Review) 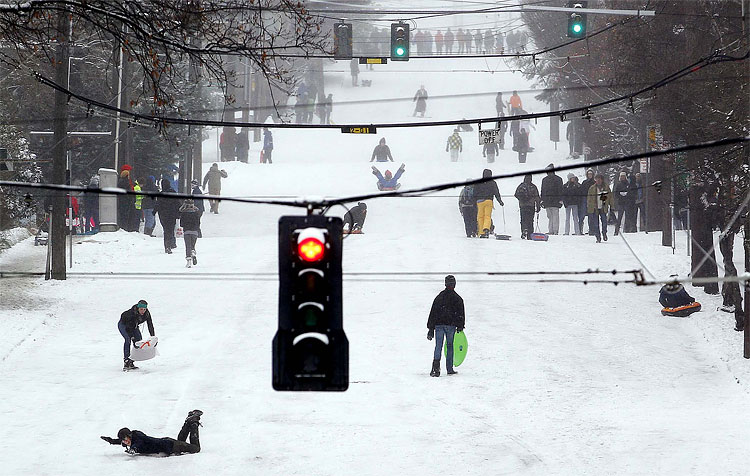 Sledders, skiers, snowboarders and pedestrians take over a snow-covered street in the Queen Anne neighborhood of Seattle. (Elaine Thompson/Associated Press)

Annalise Bauman, 7, of East Wenatchee, Washington, hangs onto her family’s dog, Hunter, as she is pulled down a sledding hill – apart from her sled – and into facefulls of powder snow at Sterling Intermediate School. Hunter is a one-year-old lab mix. Annalise’s father, Karl, said they brought the dog to try him out for this and he says next time, they’ll fit Hunter with a harness. (Don Seabrook/The Wenatchee World) 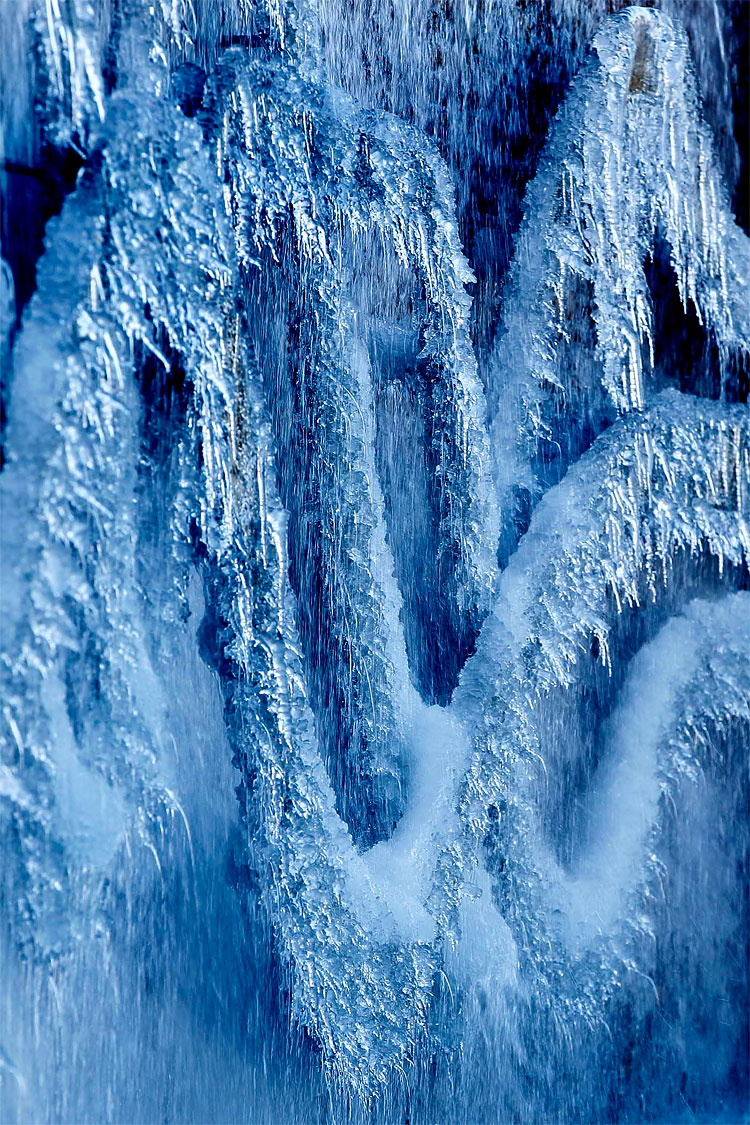 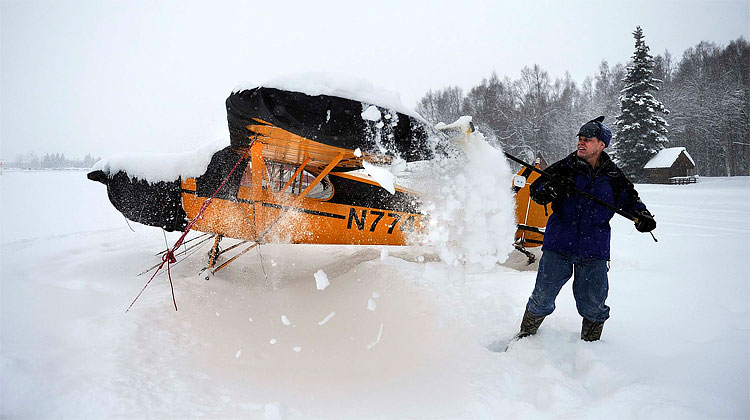 Dave Bronson sweeps snow off the wing of a friend’s plane on Lake Hood as another big snow fall hit the Anchorage, Alaska area. Anchorage had received 81.3 inches of snow at the airport measuring station as of Tuesday. Meteorologist Shaun Baines said that makes it the snowiest period for Anchorage since records have been kept. (Bob Hallinen/The Anchorage Daily News) 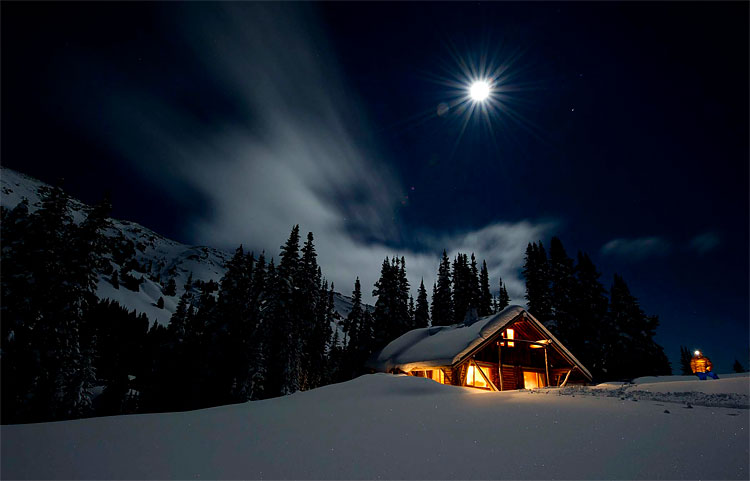 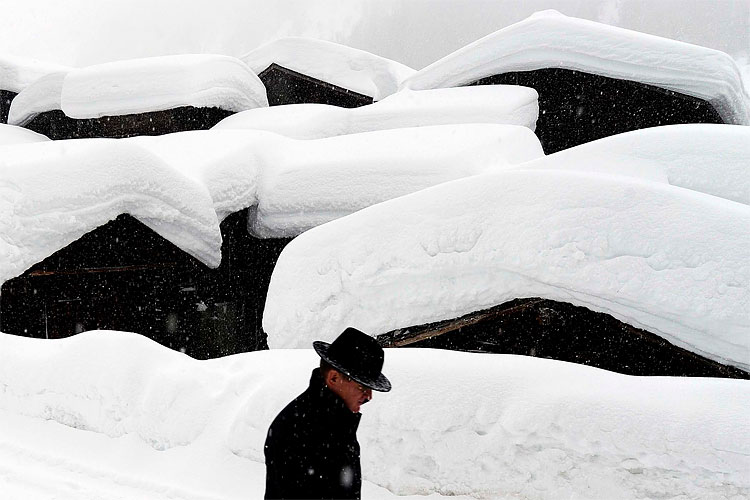 A man walks past snow-covered roofs in Blatten, in the Loetschental Valley, Switzerland. (Jean-Christophe Bott/Keystone)

Unique Photographs of Russian Beauties in Old Costumes
The Superb Black And White Abstract Beauty And Street Photo Artworks By Olivier Mayhall
The 11 Winners Of The Prestigious 2021 Audubon Bird Photography Contest
Photographer Michael Massaia Captures Haunting Images Of Central Park When No One Is Around
The Best Of The Best Surfing Photos For The 2020 Nikon Surf Photography Awards
Christine Osinski’s Photographs Of Staten Island’s Overlooked New Yorkers In 1980s
The Best Perfectly Timed Photos From Before It Was An Internet Meme
The Big Chill: Europe Gripped by Coldest Weather in Decades
A Photographer Took Stunning Portraits Of Beautiful Women With Their Eyes Shut
Unseen Photos of the 1965 Rolling Stones
A Photographer Took Delightfully Messy Photos Of Meals In Mid-Air
Breath of the Apocalypse: Heavy Fog Covers NYC Skyline
Vibrant Life Of 1970s Harlem As Photographed By Jack Garofalo
1 Lighthouse, 365 Clicks
Ronnie Wood Art Exhibition: Rolling Stones Guitarist Portraits Include Mick Jagger, Keith Richards
The Beauty Of Dark Arabian Deserts In Stunning Black And White Photographs By Abirato
Candid Snapshots Capture Everyday Life Of Vancouver Youth In The 1970s
A Man Studied Photography In Prison. These Are The Photos He Took When He Got Out.
The Immersive Black and White Photography of David Yarrow
Propaganda Pictures Of The Vietnam War From The Enemy Side
"Requiem For Pianos": Photographer Travels The Globe Taking Eerie Pictures Of Abandoned Pianos
Photographer's Girlfriend Hates Pictures, So They Came Up With This Adorable Solution
Dreamy Photos Of People Chilling In The Natural Landscapes
Funny Family Photo By Bruce Osborn
Mongrel Mob Portraits By Jono Rotman
Some Entries For 2016 National Geographic Travel Photographer Of The Year Contest
Photographer And Her Friends Reclaim Their African Roots In Visually Striking Portraits
Thriving since 1960, my garden in a bottle: Seedling sealed in its own ecosystem and watered just once in 53 years
Guardian Readers' Travel Photography Competition: July 2018 Winners
Stylish New Yorkers Pose For Portraits With Their Bikes
across, beautiful, images, places, winter, world