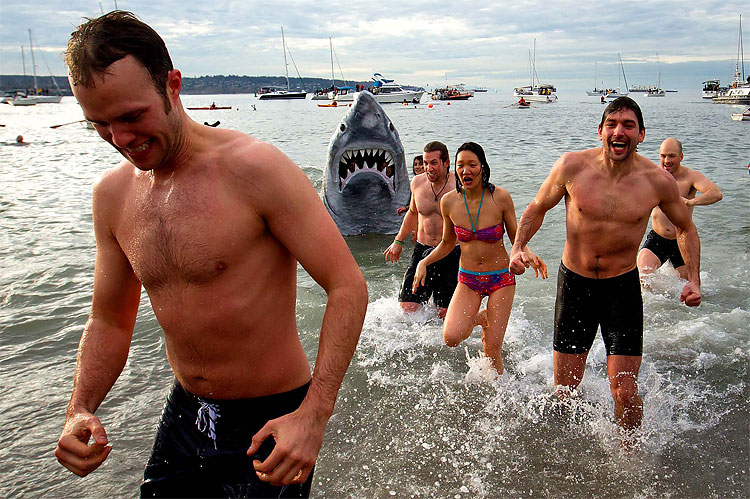 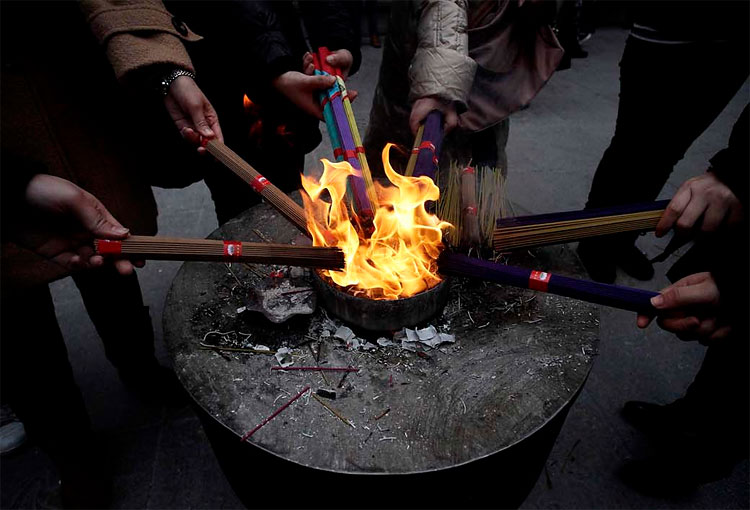 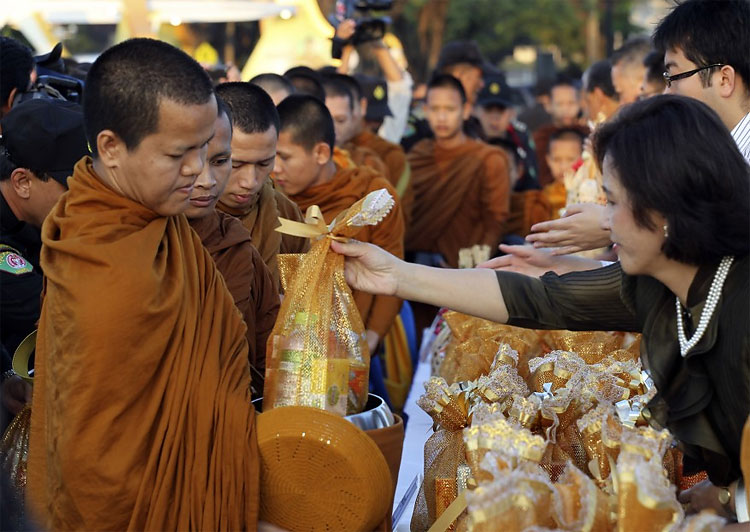 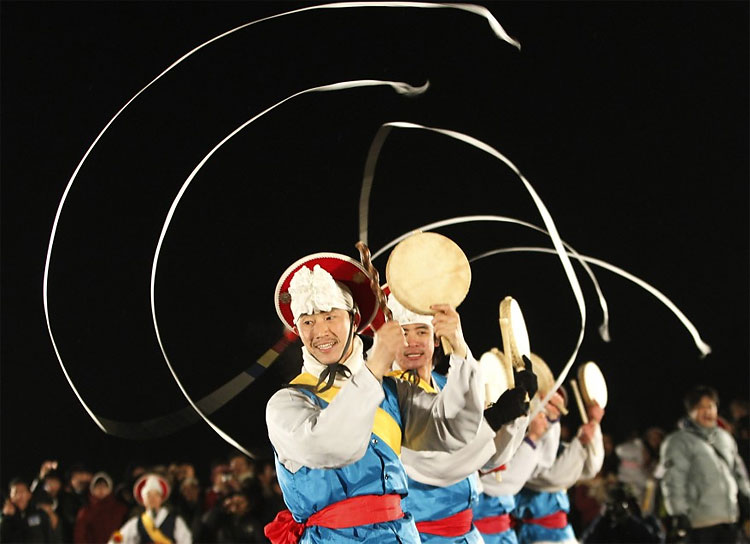 South Koreans in traditional costumes perform to celebrate the New Year at Imjingak Pavilion in Paju near the border village of Panmunjom (Demilitarized Zone), South Korea, that has separated the two Koreas since the Korean War. (AP) 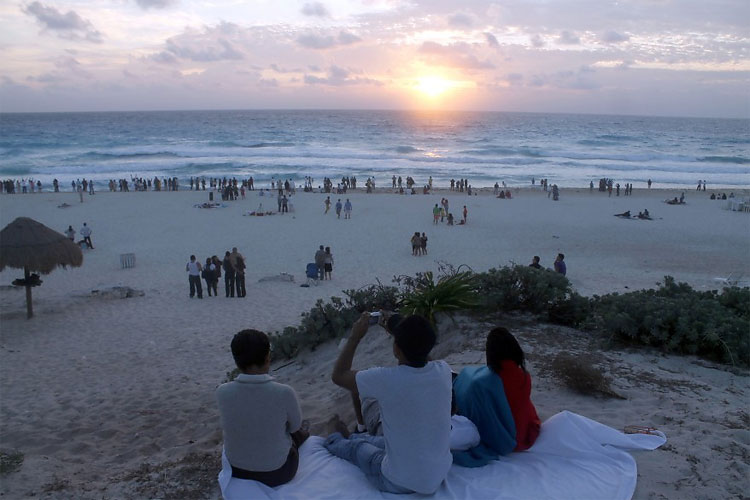 People enjoy the first rays of the sun in 2012 in Cancun, Mexico. (AP) 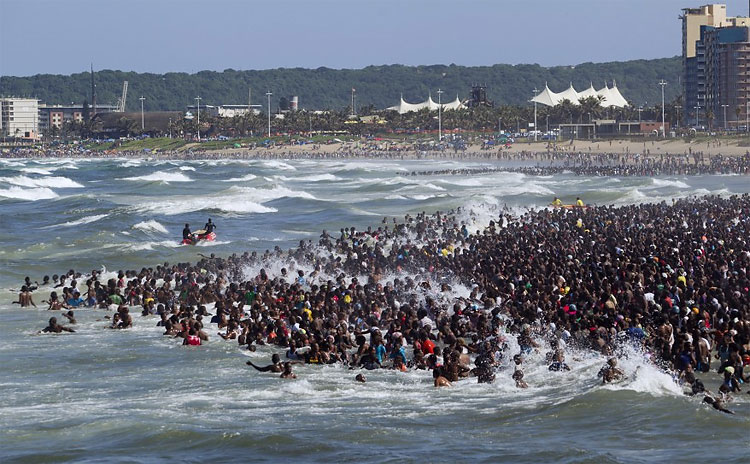 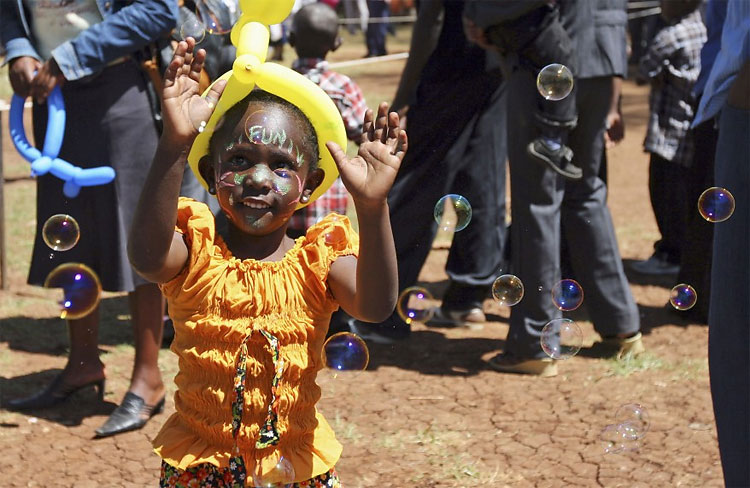 A child plays with colored water bubbles as Kenyans gather with their families at Uhuru Park, Nairobi, Kenya to celebrate the new year. (AP)

Shooters of the historic riflemen corps fire gun salutes to welcome the new year in Villingen-Schwenningen in the Black Forest, southern Germany. (AFP) 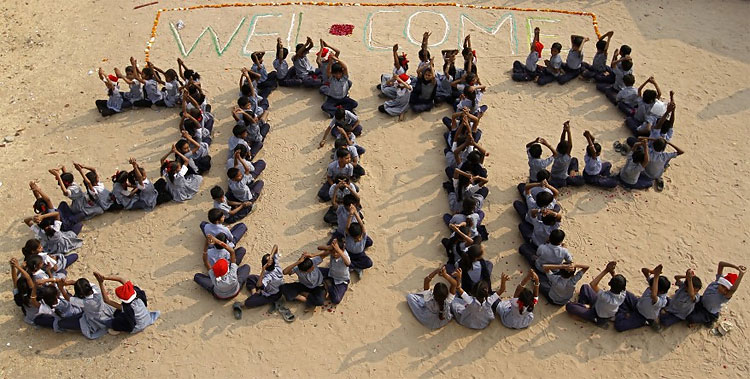 Students sit in a formation during their celebration of the New Year at a school in the western Indian city of Ahmedabad, India. (Reuters) 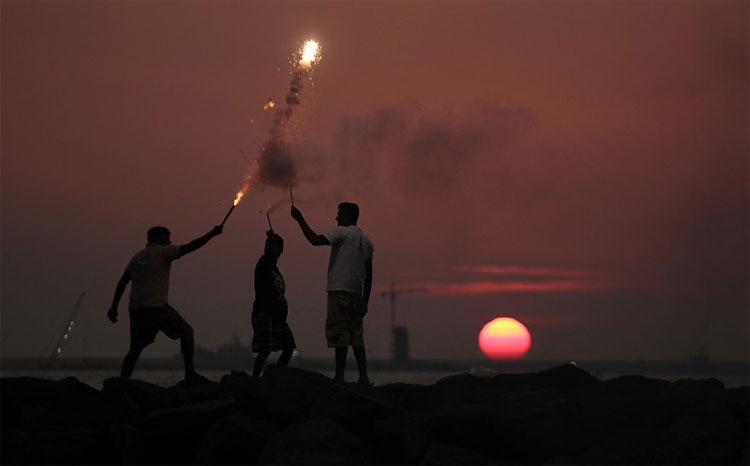 Young boys play with firecrackers on the eve of the New Year, as the sun sets in Colombo, Sri Lanka. (AP) 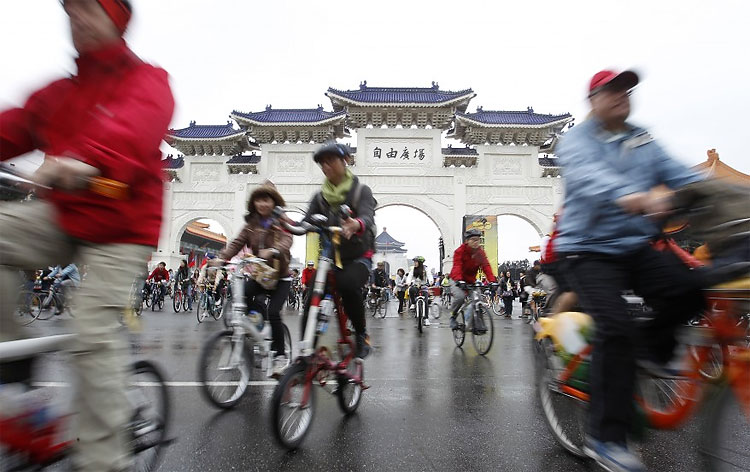 People ride their bicycles at the Chiang Kai-shek Memorial Hall in Taipei. Hundreds of thousands people participated in the bike ride on New Year’s Eve as part of an attempt to achieve a Guinness World Record of the largest bicycle parade in the world. Various groups began from 1,000 starting points around the island and cycled clock-wise towards the next starting point within one hour. (Reuters) 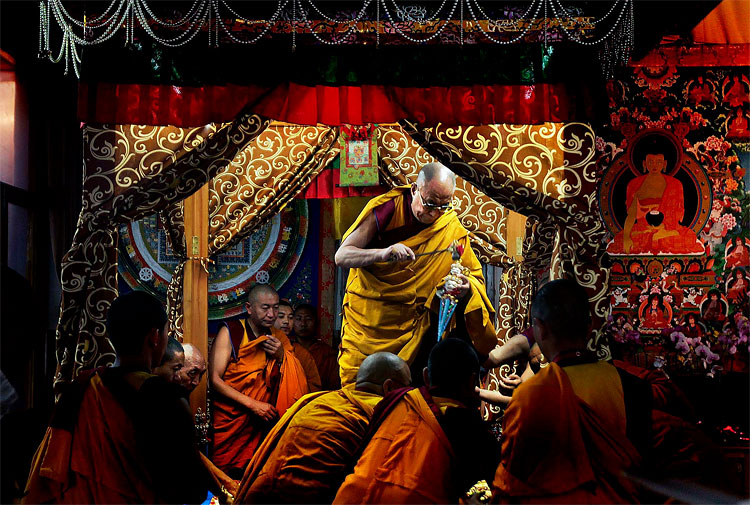 Tibetan spiritual leader the Dalai Lama performs rituals on the first day of the Buddhist festival Kalachakra, in the town of Bodh Gaya, believed to be the place where Buddha attained enlightenment, in the state of Bihar, India. (Altaf Qadri/Associated Press) 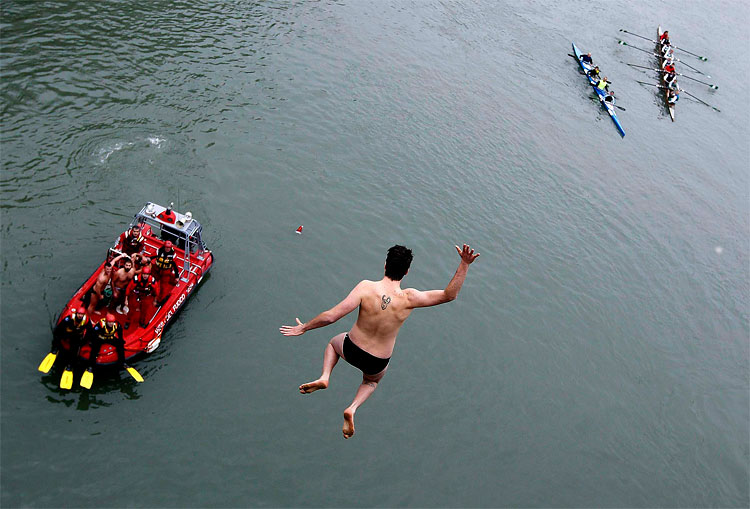 A man dives into the Tiber River from the Cavour bridge, as part of traditional New Year celebrations in Rome. Five men jumped into the muddy waters of the Tiber, continuing an annual tradition which dates back to 1946. (Tony Gentile/Reuters) 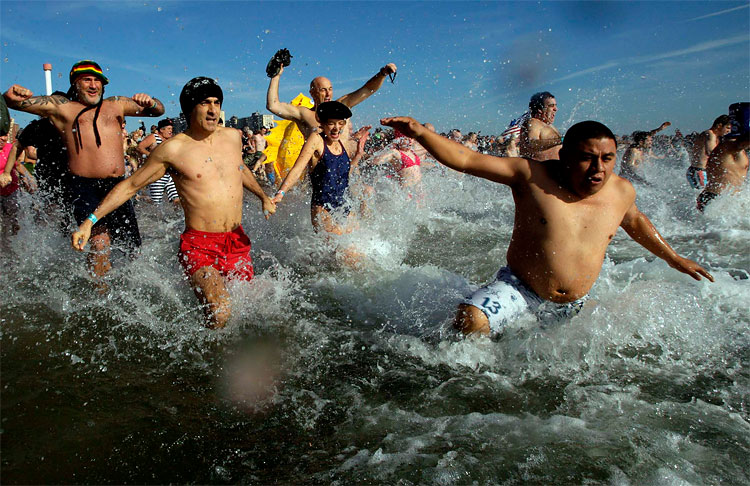 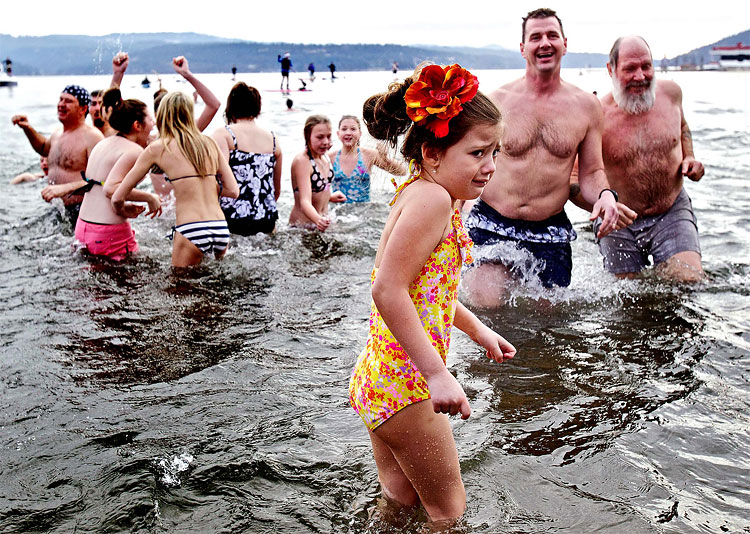 Elliana Roullier, 5, has second thoughts Sunday about following her sisters into the frigid water of Lake Coeur d’Alene at Sanders Beach during the 32nd annual Polar Bear Plunge in Coeur d’Alene, Idaho. Roullier had planned on taking the plunge with her sisters, but made it about knee deep before seeking warmer conditions. (Jerome A. Pollos/Coeur d’Alene Press) 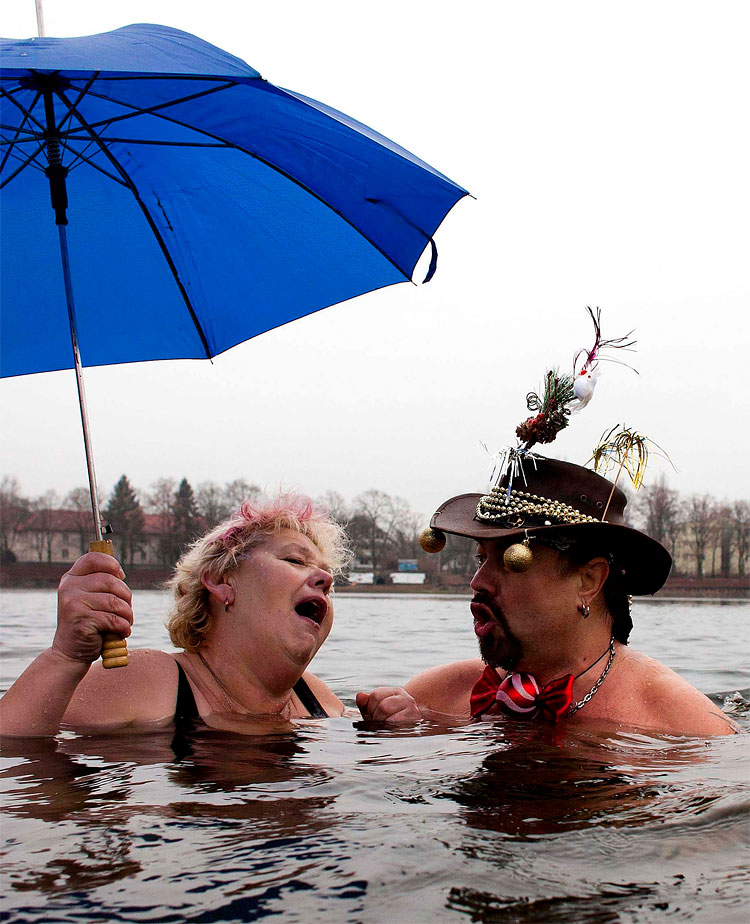 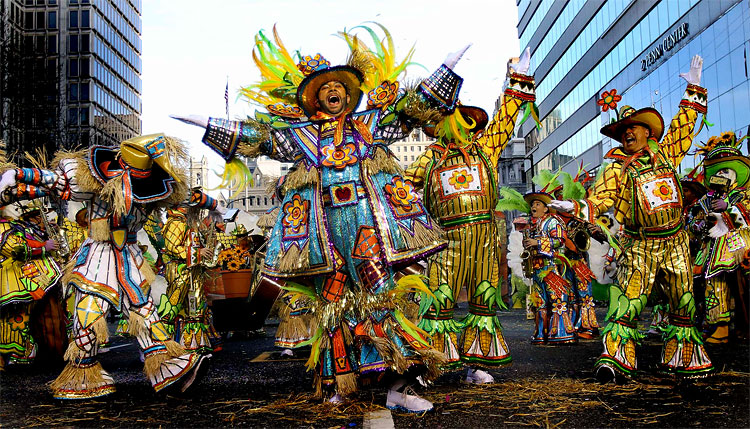 People participate in the Mummers Parade in Philadelphia. The parade, often compared to Mardi Gras, is a century-old tradition featuring elaborately festooned musicians, comics and other performers. (Joseph Kaczmarek/Associated Press) 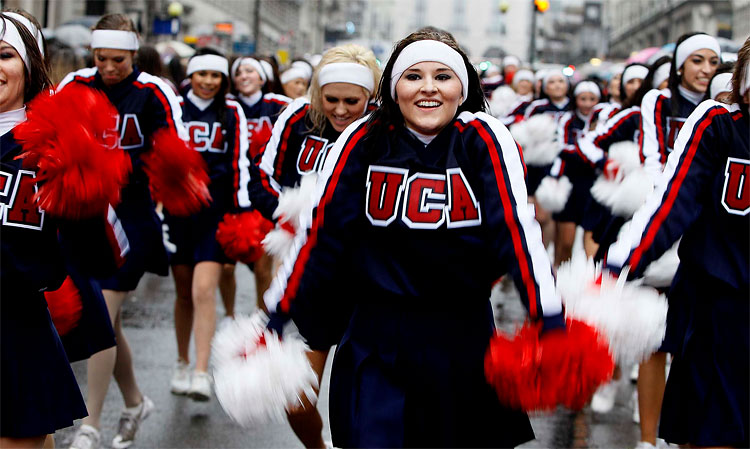 A member of the Universal Cheerleaders Association reacts as she performs in the rain during the annual London New Year’s Day parade. (Alastair Grant/Associated Press) 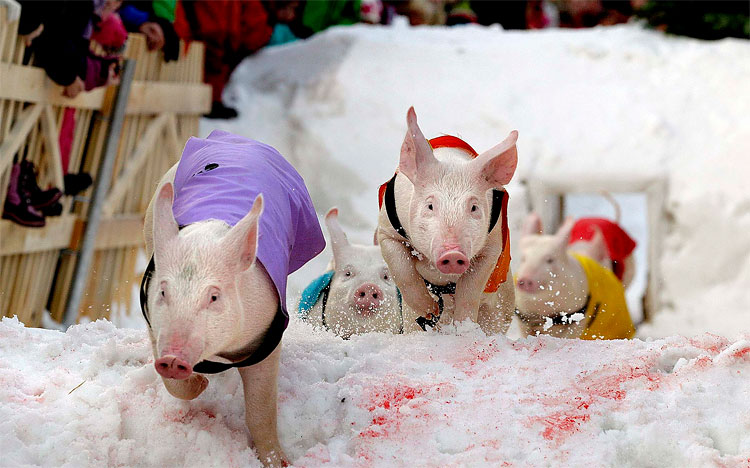 Pigs race through an obstacle course in Klosters, Switzerland. The race of the “lucky pigs” takes place every New Year’s Day. (Arno Balzarini/Keystone)