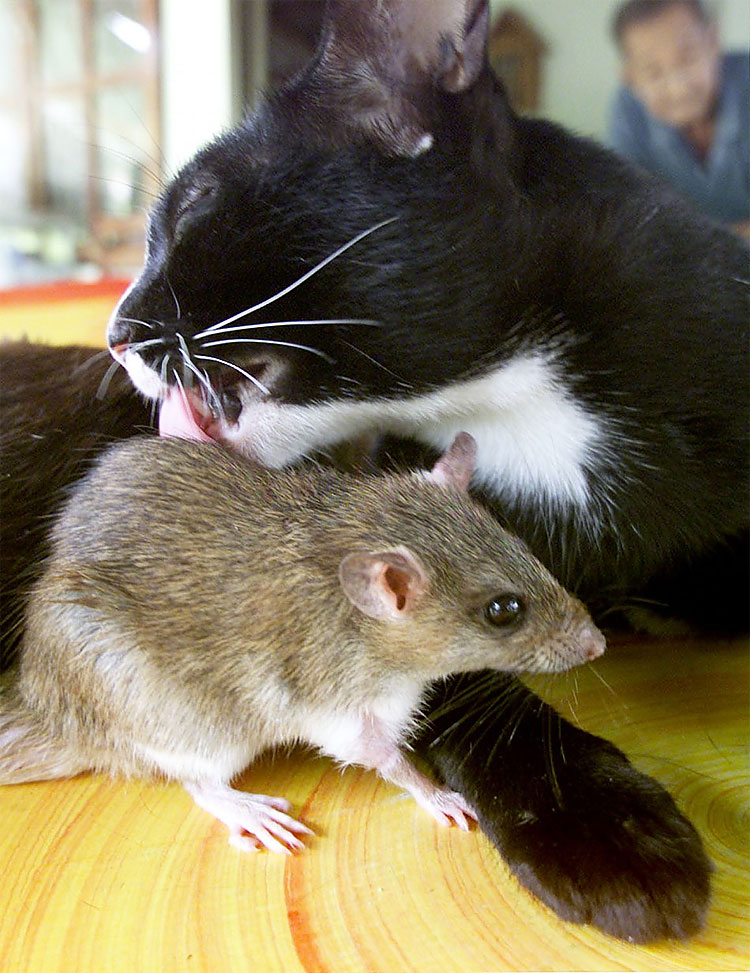 Auan, a seven-year-old female cat, licks the body of Jeena, a three-year-old male mouse, at a farmer’s house in the central province of Phichit, 450 km (281 miles) north of Bangkok on August 7, 2002. The animals owners say Auan found Jeena three years ago and has been his playmate and protector, including warding off dogs, since then. (Reuters) 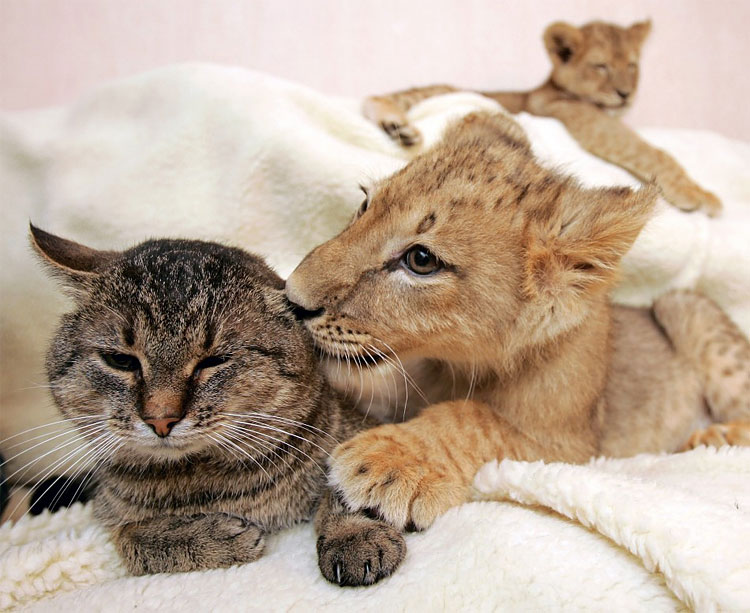 A lion cub caresses a domestic cat as another lion rests in a private house in Kharkov, about 450 km (279.4 miles) northeast of Kiev December 15, 2005. The three-month-old lions live in the house of Tatyana Efremova who also keeps a number of other exotic animals. (Reuters) 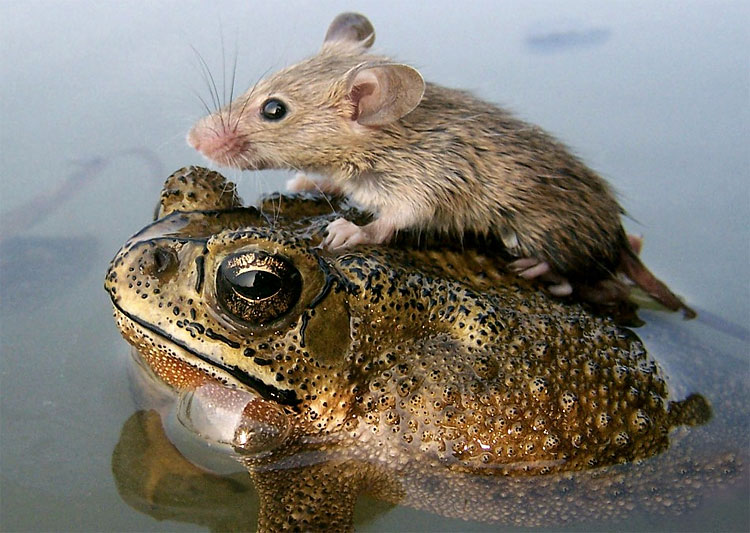 A mouse rides on the back of a frog in floodwaters in the northern Indian city of Lucknow June 30, 2006. (Reuters) 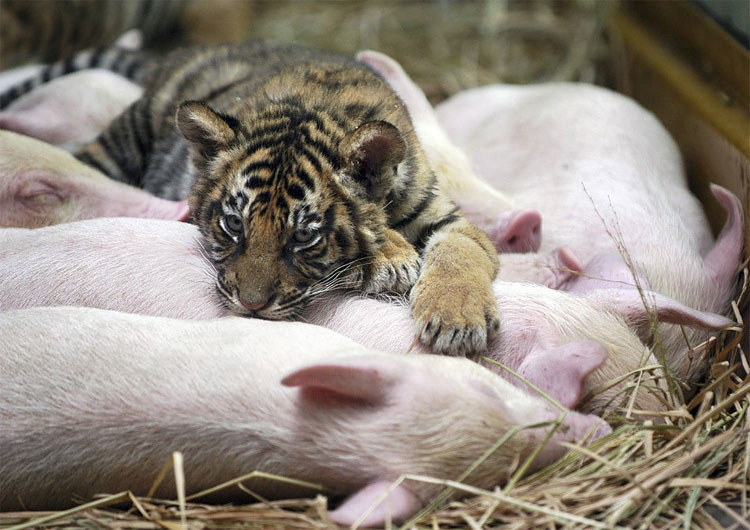 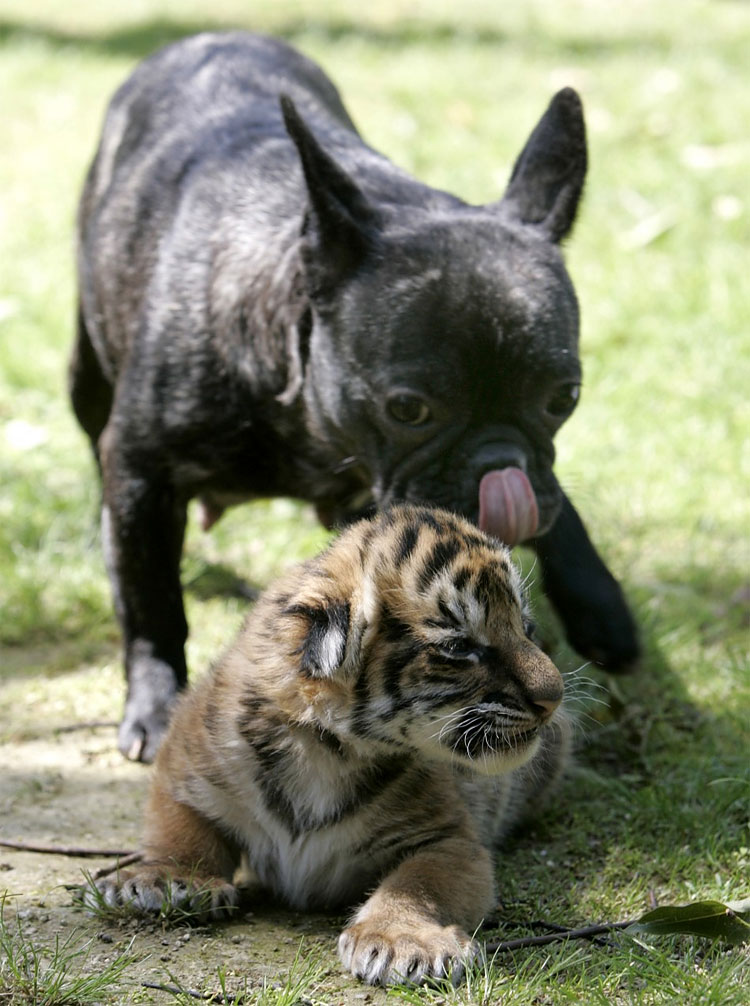 A French bulldog plays with a two-week-old baby Bengal tiger, which was rejected by its mother, at Shirotori zoo in Higashikagawa, southwestern Japan May 11, 2007. The dog is nursing the baby tiger as if it is its true mother, according to the zoo. (Reuters) 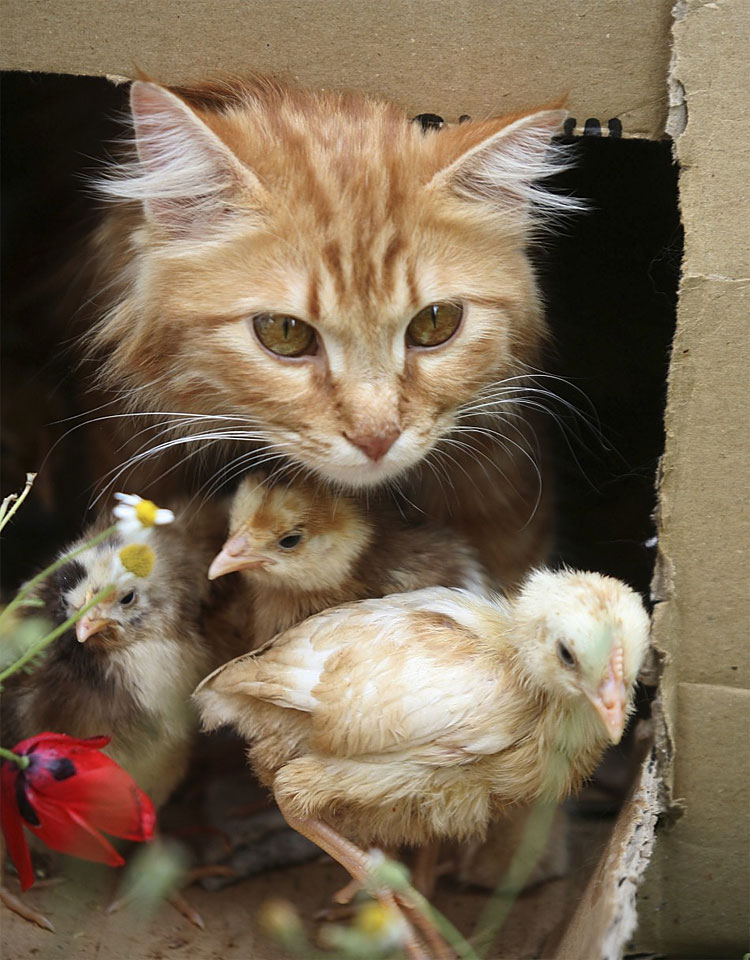 Nimra, a one-year-old cat, plays with chicks in Amman May 13, 2007. Nimra has been taking care of seven chicks after their mother’s death a month ago. (Reuters) 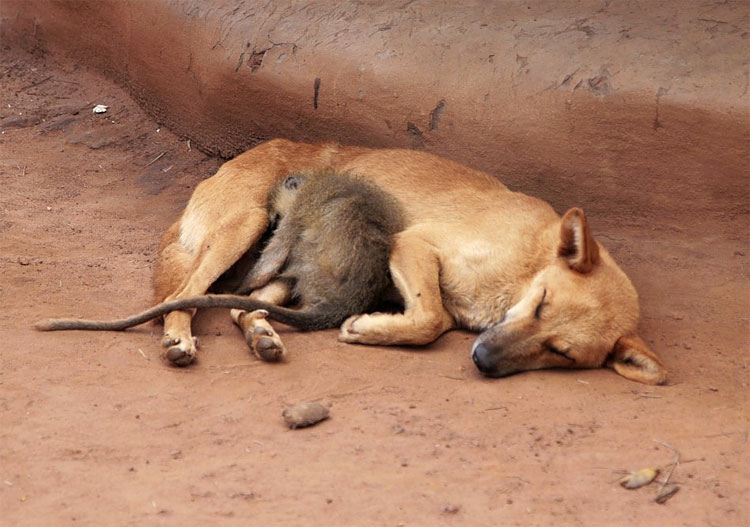 A monkey sleeps next to a dog at Lacor camp for internally displaced persons in northern Uganda June 8, 2007. (Reuters) 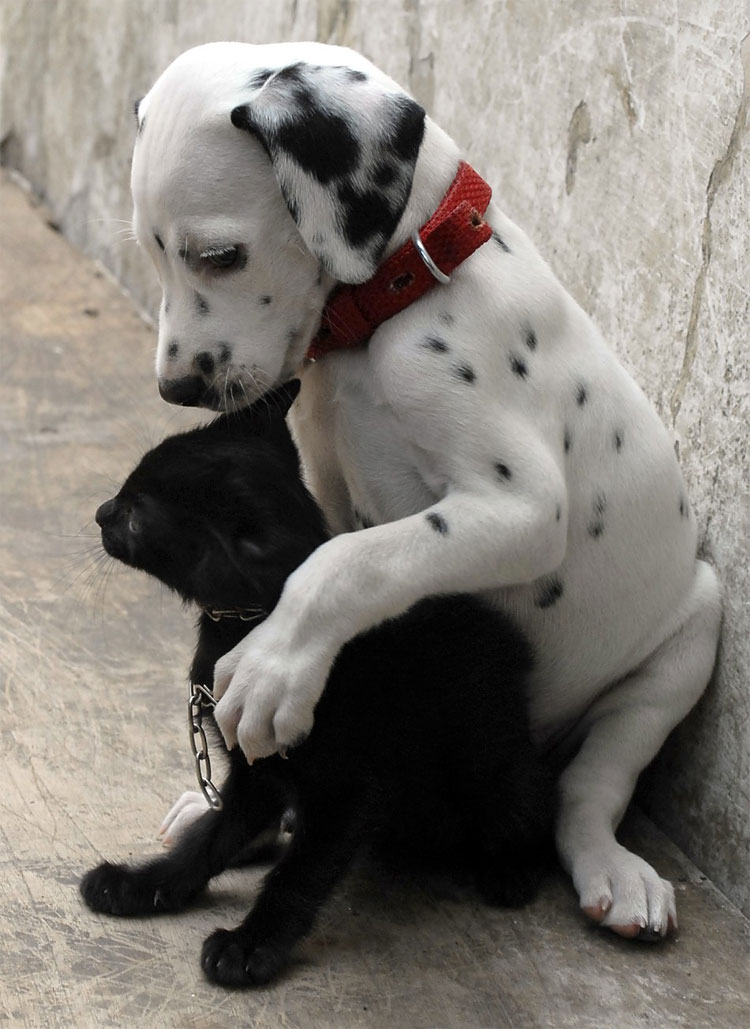 Morphy, a 45-day-old dog, and Cathey, a 30-day-old cat, play at a veterinary hospital as they wait to be vaccinated in the southern Indian city of Hyderabad July 6, 2007. July 6 is celebrated as “World Zoonosis Day” the world over to bring awareness about the disease. “Zoonosis” is any infectious disease that is transmitted from animals to humans. (Reuters) 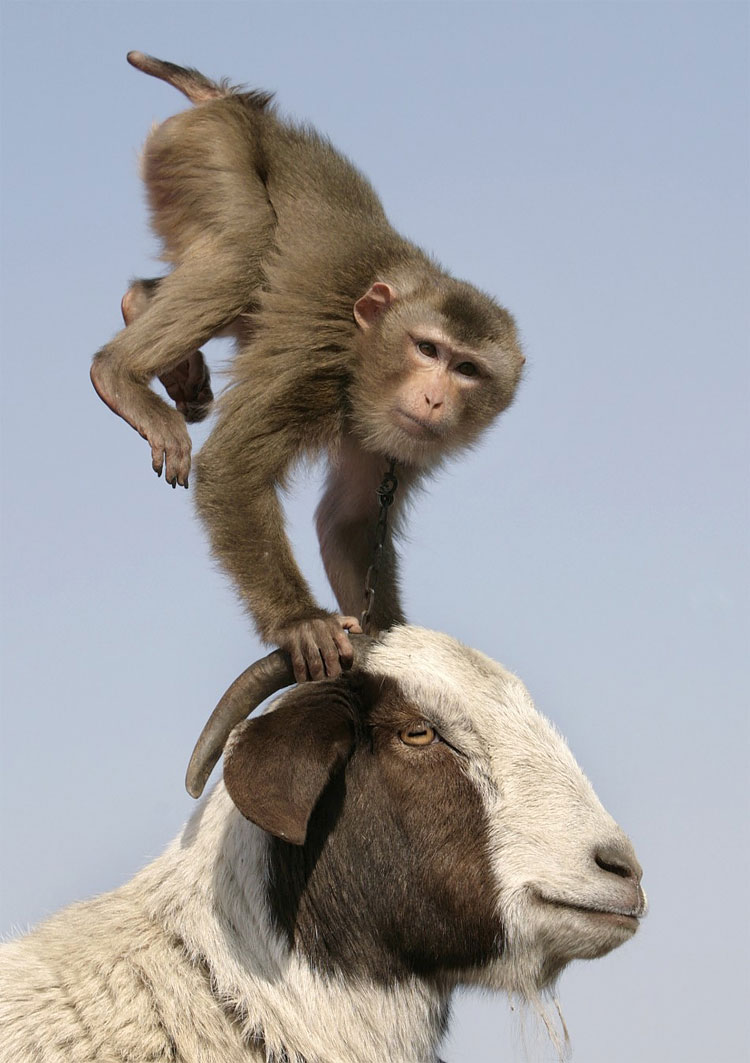 A monkey does a handstand on the head of a sheep during a performance at a temple fair held to celebrate the upcoming Chinese New Year in Beijing February 13, 2010. The Chinese New Year begins on February 14 and according to the Lunar calendar will be the Year of the Tiger. (Reuters) 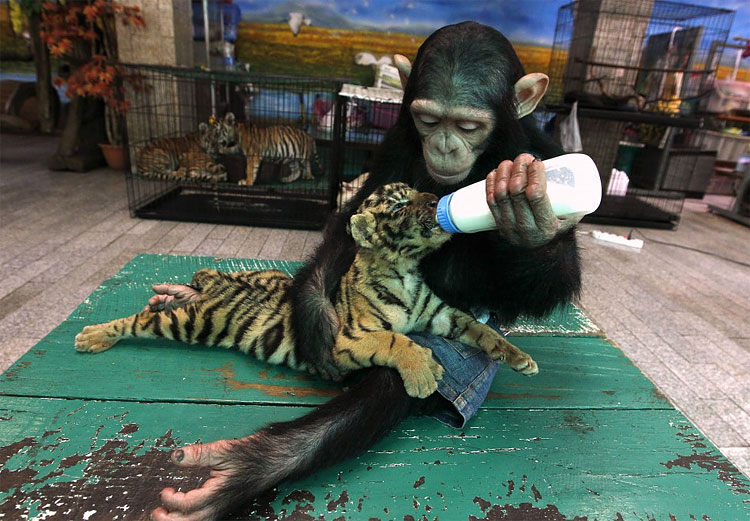 Two-year-old chimpanzee “Do Do” feeds milk to “Aorn”, a 60-day-old tiger cub, at Samut Prakan Crocodile Farm and Zoo in Samut Prakan province on the outskirts of Bangkok July 30, 2011. The crocodile farm, used as a tourist attraction, houses some 80,000 crocodiles and is the largest in Thailand. (Reuters) 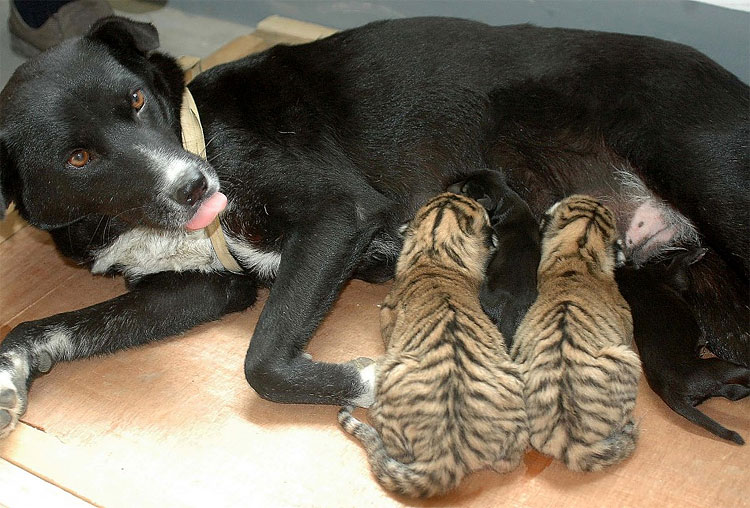 A dog feeds two tiger cubs in a zoo in Hefei, east China’s Anhui province in this picture taken on May 2, 2005. The tigers mother, who gave birth to the two cubs on May 1 is unable to produce enough milk and the zoo keepers found a dog to act as the wet nurse. (Reuters) 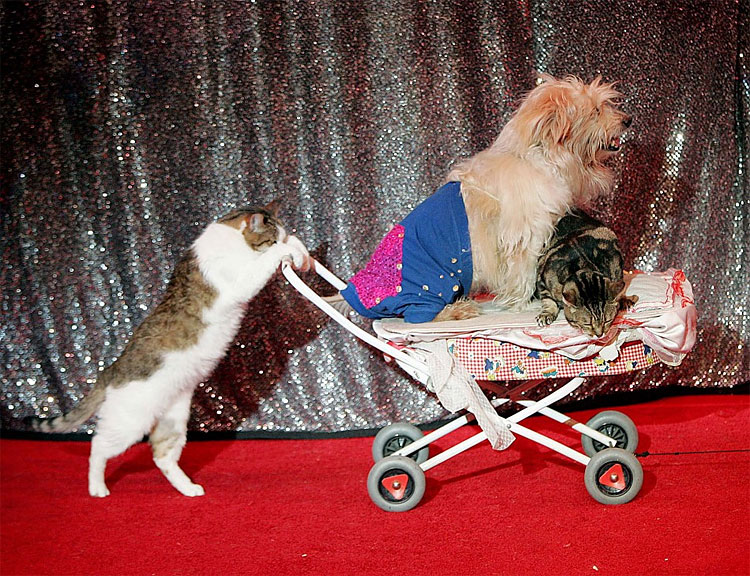 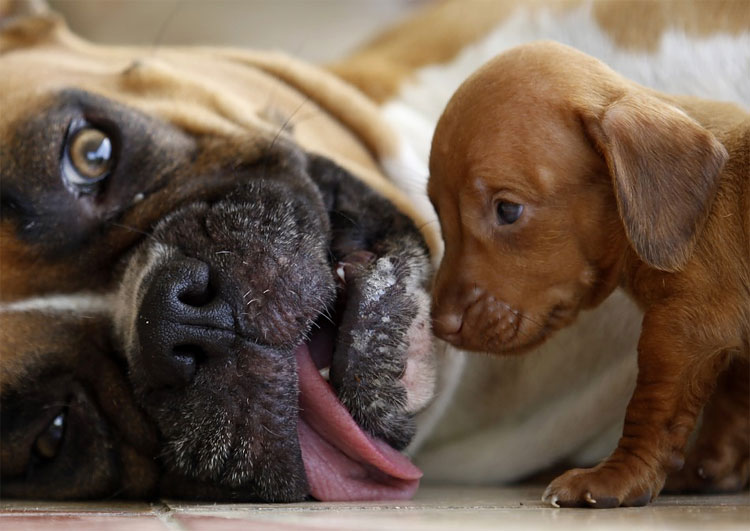 A boxer rests as a Dachshund pup approaches it in Sagua La Grande, province of Santa Clara in central Cuba, July 18, 2009. (Reuters) 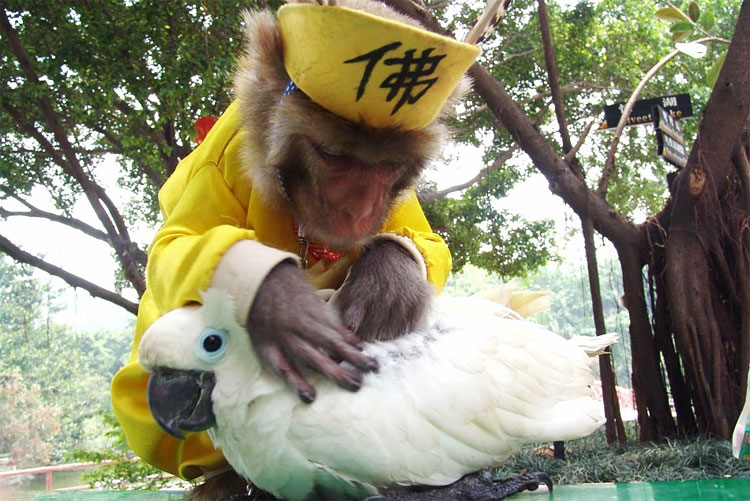 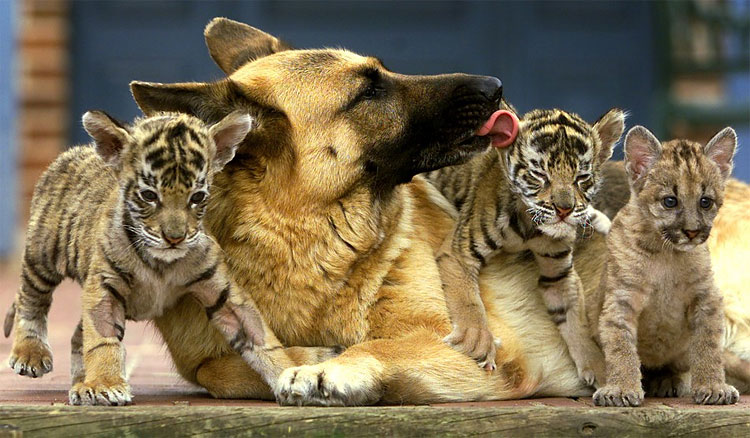 A Bengal tiger and cougar cubs sit with a german shepherd at a veterinarian’s house in Sydney April 2, 2001. (Reuters) 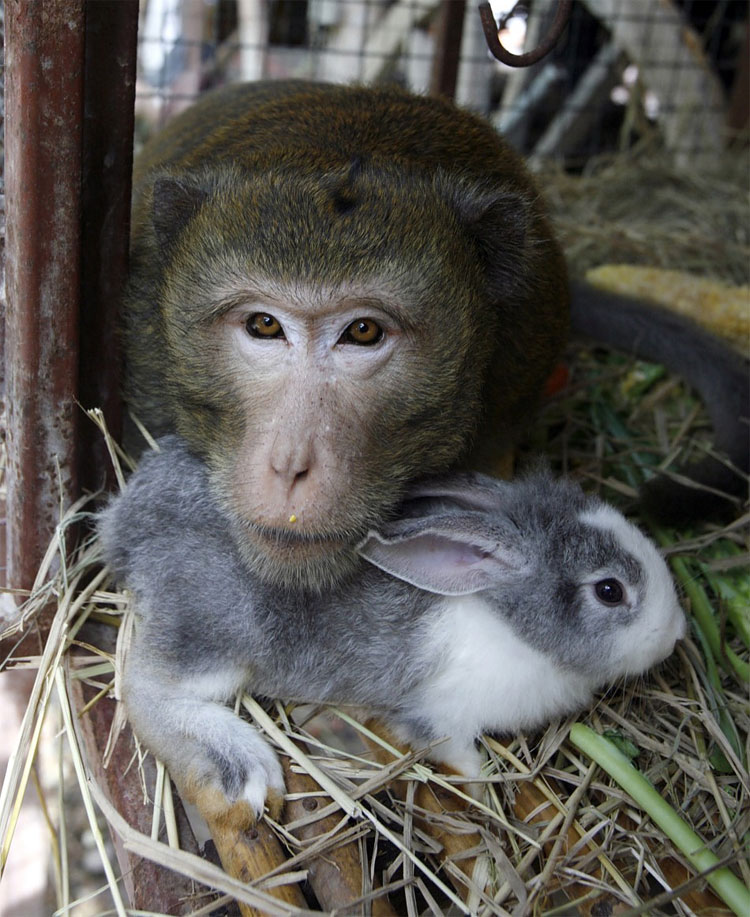 BoonLua, a long-tailed macaque, lives with Toby, a rabbit, in Ayutthaya province about 80 km (50 miles) north of Bangkok September 6, 2008. BoonLua, the six-year-old wild monkey, lost both its legs and one arm during an attack by dogs three years ago. It dragged itself to a nearby temple where it received medical treatment and survived. He now lives in a custom built enclosure with the rabbit. (Reuters) 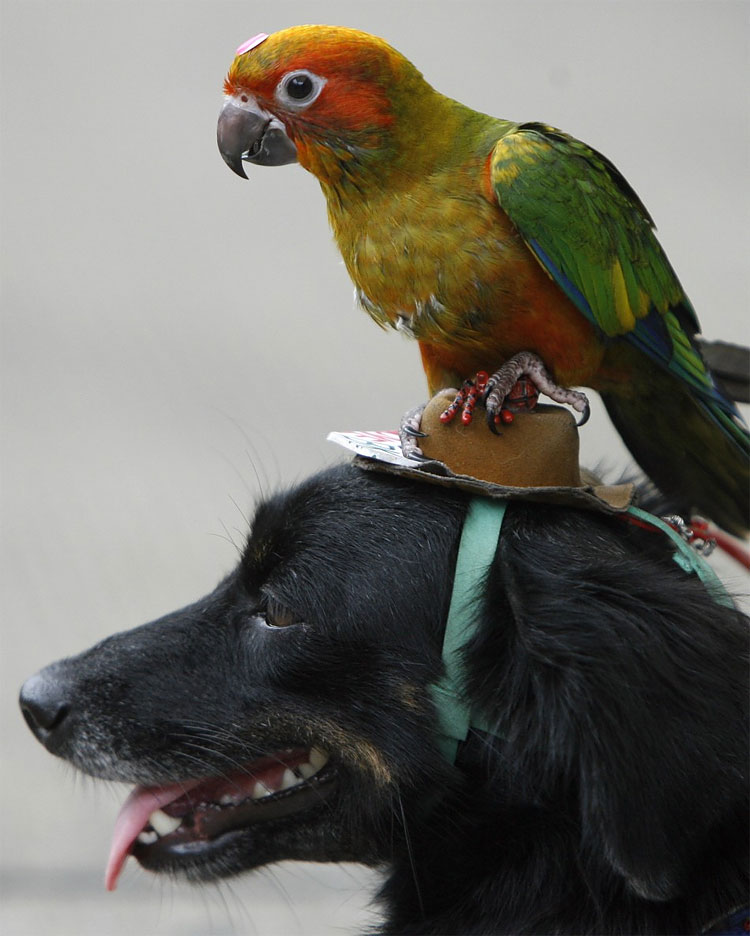 Keow Wan, a four-month-old Sun Conure parrot, perches on Yim, a dog whose name means smile in Thai, as their owners take part in a pray for peace ceremony at Royal Plaza in Bangkok October 22, 2008. The owners dressed up the dog and the parrot and put the two together to bring joy and happiness to all who see the pair. (Reuters) 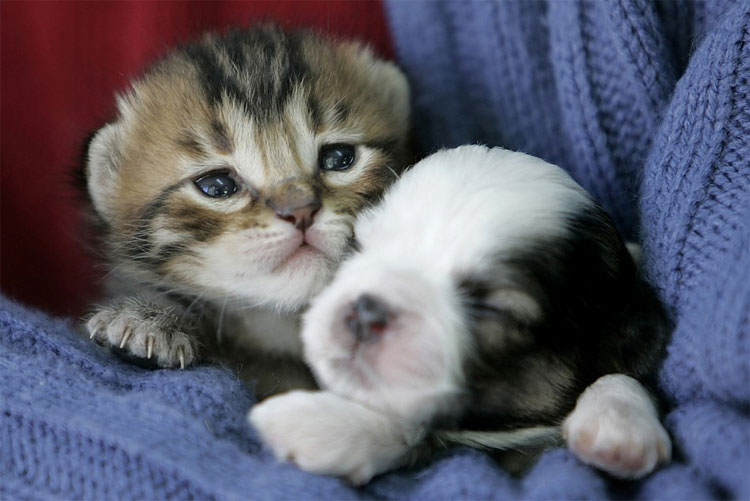 Mohammad Al-Hamoury holds a kitten and a puppy (R) at his house in Amman February 26, 2009. Al-Hamoury’s cat Smaigel is parenting four puppies whose mother died in a car accident. (Reuters) 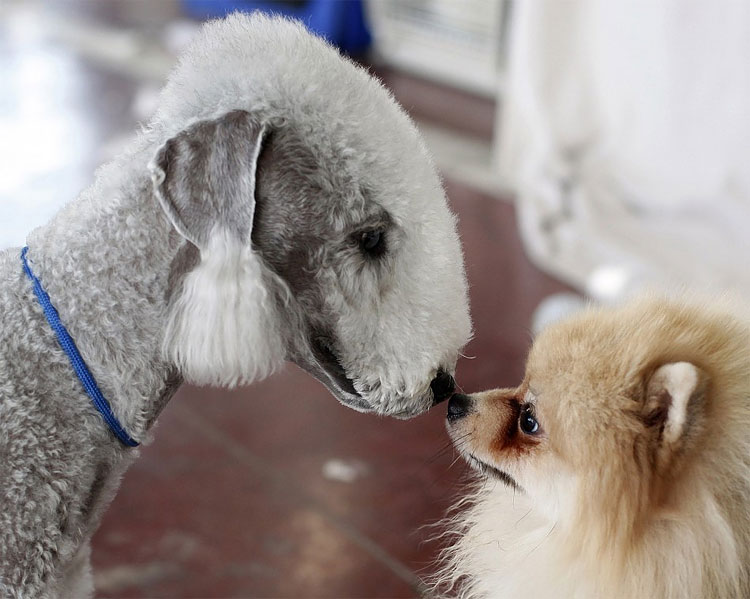 A Belington Terrier (L) and a Pomeranian Spitz look at each other during the International Dog Show in Afula October 9, 2010. (Reuters)

The Beautiful Winning Photos Of The Military Visual Awards For 2019
“Lens Between Us” Project
People Blend Themselves In With Vinyls
Artist Used A.I. To See How Good It Would Be At Guessing What These Celebrities Looked Like As Teenagers
Sydney Beaches Turn Blood Red From Algae
Victoria's Secret Fashion Show 2011
Atkins CIWEM Environmental Photographer Of The Year 2016 Shortlist
How Far From Home: Couple of Adventure Hunters Share Breathtaking Shots Of Unique Places
Best Photos of Mountain Summit Contest 2011
Reuters Pictures of the Year 2014, Part 1
Methamphetamine Addiction. Before and After.
Photographer Simon Laveuve
Sensual Fine Art Self Portraits by Beth Parnaby
Beautiful Ethiopian Headwear Made From Your Trash
Scottish Photographer Alan McFadyen Digs Pool In Forest For ‘Mirrored’ Wildlife Photos
"Sunken Time": Soviet Russia, XX Century, 1962-1992, In Black & White Photographs By Mikhail Dashevsky
The Photographer Who Was Bitten By A Black Mamba… And Got The Shot
Cool Snaps Show What Badass Girls Looked Like In The 1940s
20 Amazing Photos Of A Young And Hot Axl Rose In The 1980s
"The Empire Against The Crisis": Darth Vader Forced To Do Odd Jobs
Futuristic Views Of Singapore Through The Lens Of Photographer Ellis Anton
Photographer Spends 10 Years Photographing Same Bench, Captures More Than He Expects
Not in Your Face
16 Moms Who’re Proud Of Their Perfect Imperfections
"Rite of Passage": Striking Vintage Photos of Florida Spring Break in the ‘80s
Still Life in 1960s New York in Beautiful Memorabilia Photographs by Evelyn Hofer
"75 Parisiennes": French Photographer Spends 6 Years Capturing Women In Paris
Creative And Colorful Minimalist Photography By Roynaldi Saputra
Mexico Day Of The Dead Parade 2019
Photo of the Day: A Man and His Rooster
animal, friendships, instinct, unlikely, world