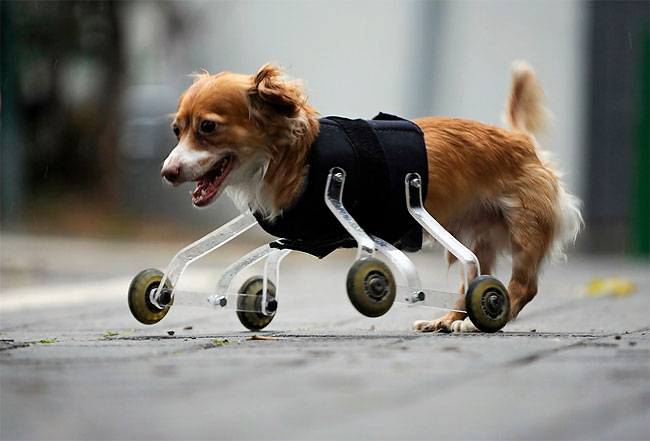 Hoppa, a four-year-old mixed breed dog born without front legs, uses a prosthetic device to walk outside in the central Israeli city of Tel Aviv February 28, 2010. The device was invented especially for Hoppa by a animal-loving art student, who hopes his wheeling device will improve the lives of pets born with abnormalities or with amputated limbs. (Amir Cohen/Reuters) 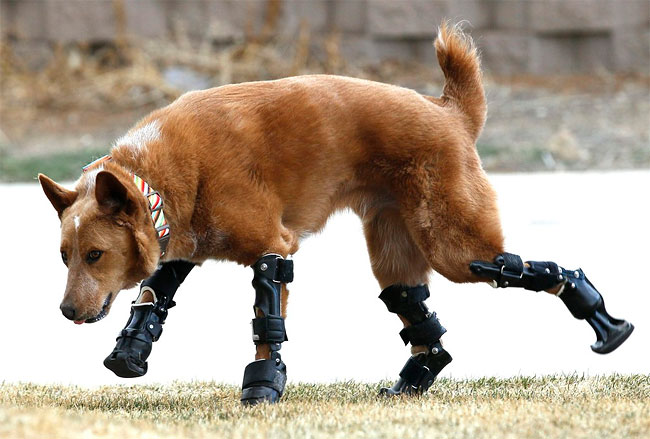 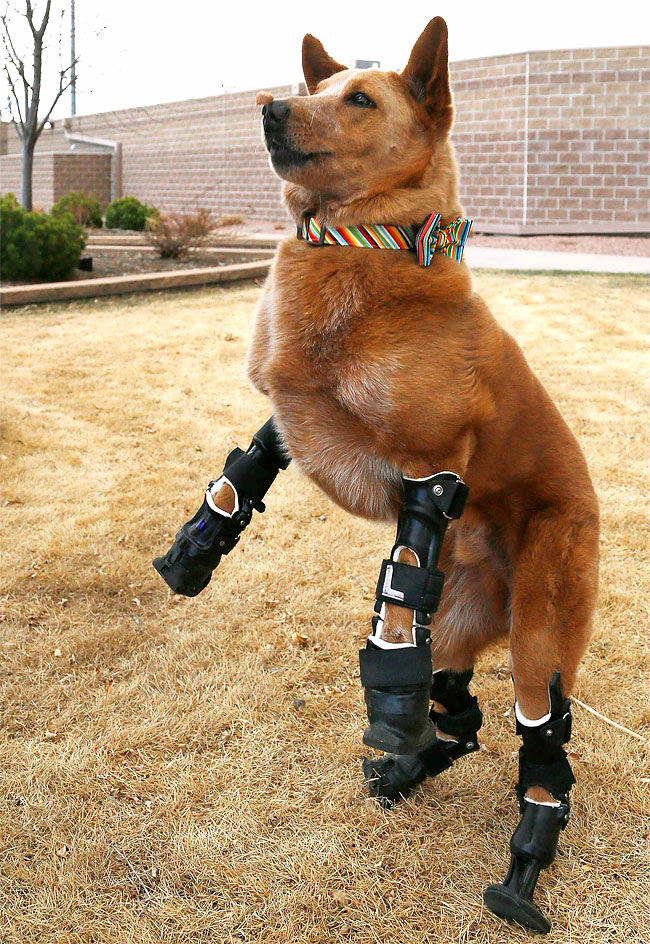 Naki’o, a mixed-breed dog with four prosthetic devices, goes for a run in Colorado Springs April 12, 2013. Naki’o lost all four feet to frostbite when he was abandoned as a puppy in a foreclosed home. (Rick Wilking/Reuters) 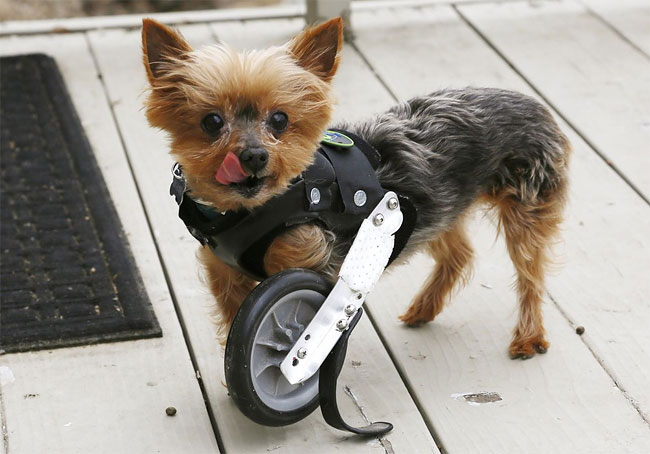 A Yorkshire Terrier named Hope shows off her uni-wheel attached to a doggie vest in Longmont, Colorado April 21, 2013. Hope is missing one limb and is able to walk with the wheel attachment. (Rick Wilking/Reuters) 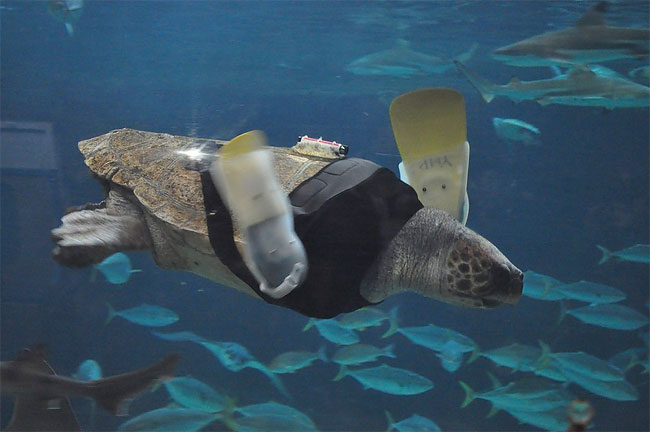 A 25-year-old female loggerhead turtle named Yu swims after receiving her 27th pair of prosthetic flippers at the Suma Aqualife Park in Kobe, western Japan February 11, 2013. Life looked grim for Yu, a loggerhead turtle, when she washed up in a Japanese fishing net five years ago, her front flippers shredded after a brutal encounter with a shark. Now keepers at an aquarium in the western Japanese city of Kobe are fighting to find a high-tech solution that will allow the 25-year-old turtle to swim again, with years of labours and 27 models of prosthetic fins behind them without success. (Reuters/Suma Aqualife Park) 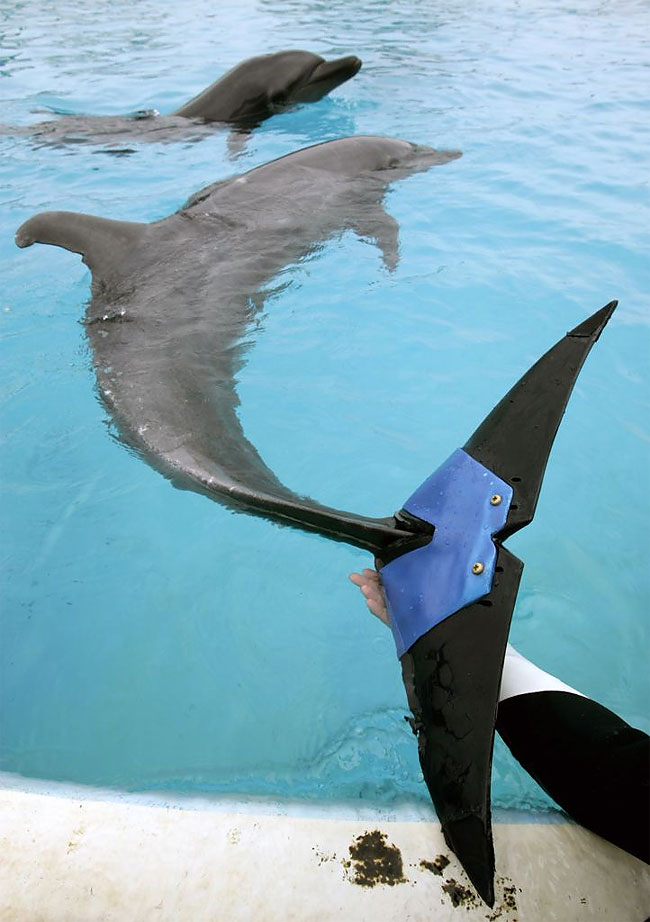 A keeper holds an artificial tail fluke attached to female bottlenose dolphin “Fuji”, estimated to be 37-years-old, at Okinawa Churaumi Aquarium in Motobu town on the southern Japanese island of Okinawa February 14, 2007. Fuji lost 75 percent of her tail fluke due to an unknown disease in 2002. The dolphin can swim and jump using the artificial tail fluke, which is believed to be the world’s first artificial fin for a dolphin, and was developed by veterinarians and Japan’s largest tire maker Bridgestone Co., an aquarium official said. (Issei Kato/Reuters) 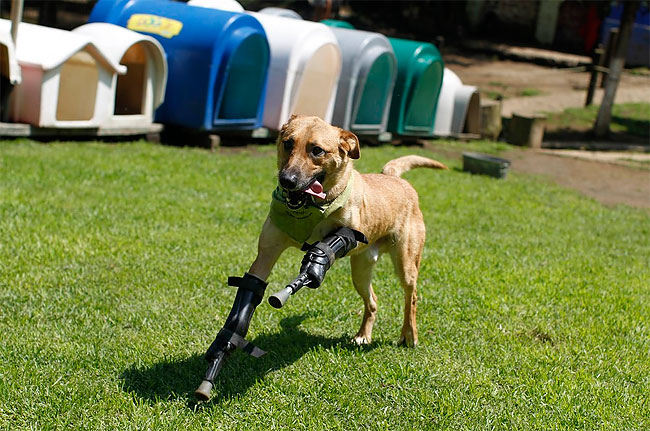 A dog named Pay de Limon (Lemon Pay) runs fitted with two front prosthetic legs at Milagros Caninos rescue shelter in Mexico City August 29, 2012. Members of a drug gang in the Mexican state of Zacatecas chopped off Limon’s paws to practise cutting fingers off kidnapped people, according to Milagros Caninos founder Patricia Ruiz. Fresnillo residents found Limon in a dumpster bleeding and legless. After administering first aid procedures, they managed to take him to Milagros Caninos, an association that rehabilitates dogs that have suffered extreme abuse. The prosthetic limbs were made at OrthoPets in Denver, U.S., after the shelter was able to raise over $6,000. (Tomas Bravo/Reuters) 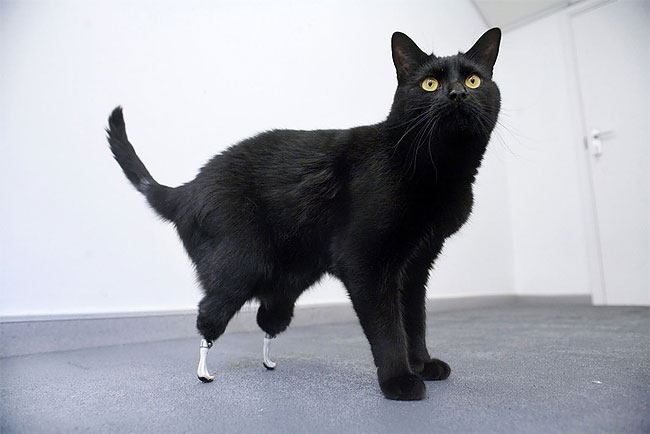 scar the cat, which had its hind legs severed by a combine harvester, stands in this undated handout. Two-year-old Oscar can walk again after being fitted with prosthetic limbs in a world-first operation. Oscar was given a pair of artificial limbs by veterinary surgeon Noel Fitzpatrick, using a technique developed by a University College London team. (Reuters) 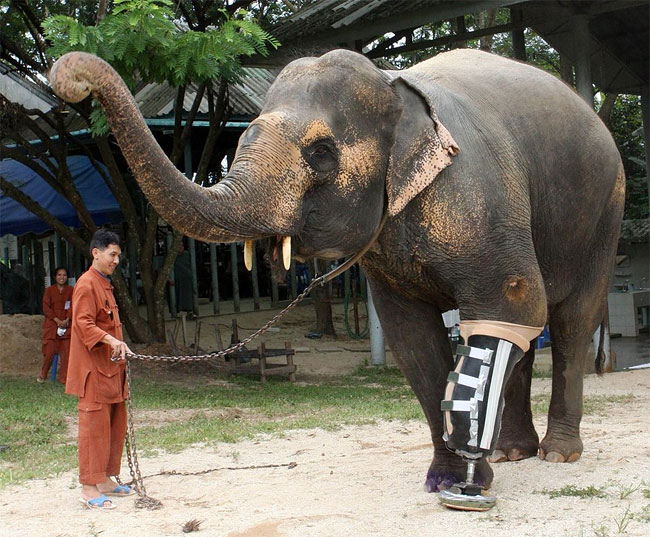 A 48-year-old female elephant named Motala walks on her newly attached prosthetic leg at the Elephant Hospital in Lampang province, north of Bangkok August 16, 2009. Motala’s front left leg was maimed after she stepped on a landmine at the Myanmar-Thai border 10 years ago. (Phichaiyong Mayerku/Reuters) 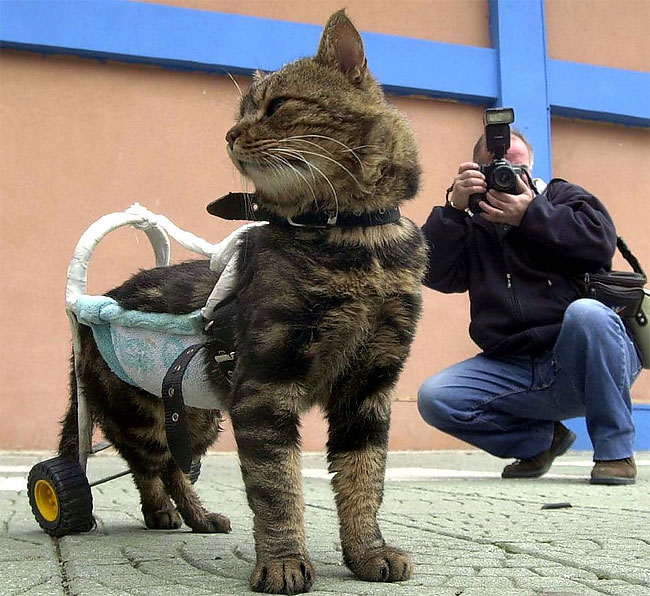 A seven-year-old disabled cat named Cici is helped to walk by a device as she participates in “Cat Show 2002” in the western Turkish city of Izmir, December 29, 2002. Cici was disabled in a traffic accident two months prior. (Reuters) 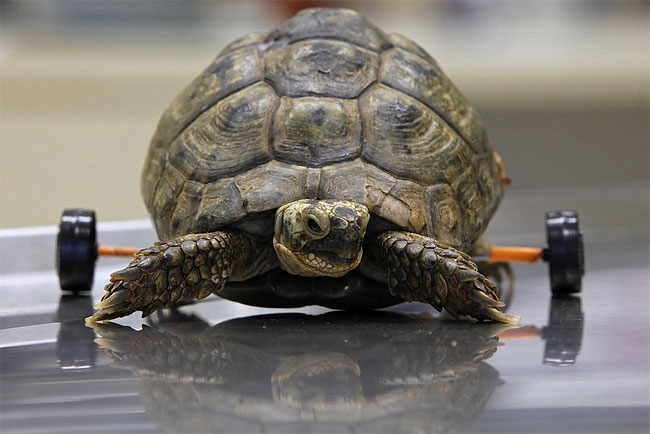 Tzvika, an injured female turtle, walks with the aid of her newly attached wheels at the Wildlife Hospital in the Ramat Gan Safari near Tel Aviv January 5, 2011. About two months ago, Tzvika was run over by a lawn mower and suffered severe damage to her shell, and a spinal injury that affected her ability to use her rear limbs. The wheels, attached by veterinarians at the safari, elevate the turtle to keep the shell from being worn down and enable her to walk. (Nir Elias/Reuters) 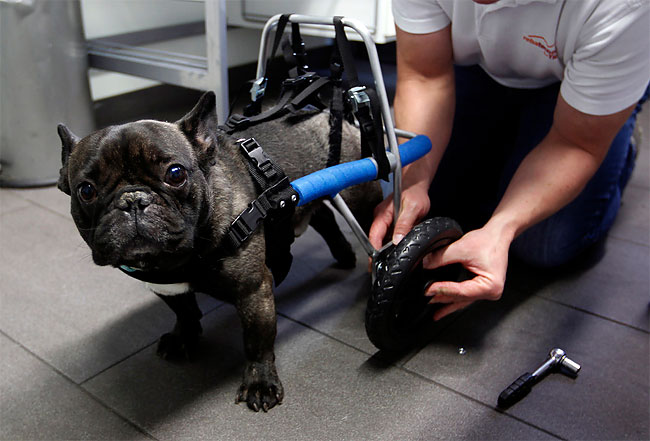 Marco van den Boom installs a wheel of a medical roll car for French bulldog Billy at the headquarters of ‘Rehatechnik fuer Tiere’ (medical engineering for animals) in the western town of Witten November 9, 2012. Four-year old Billy, whose hind legs are paralyzed since birth, ran for the first time on Friday with the aid of the roll car. “Rehatechnik fuer Tiere” owner Marco van den Boom, custom builds a range of roll cars for disabled or infirm dogs and animals, to help aid their mobility or paralysis needs. (Ina Fassbender/Reuters) 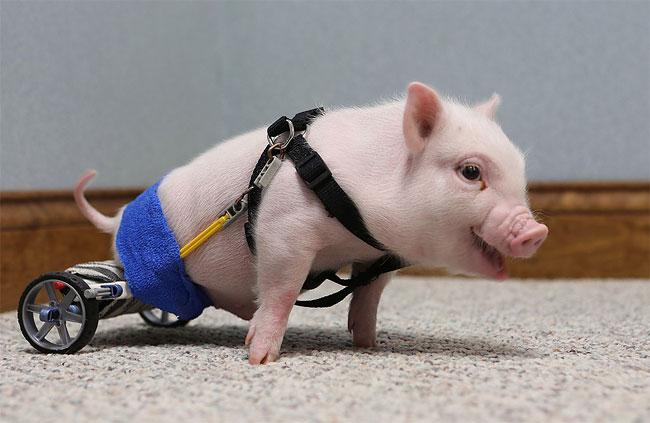 Chris P. Bacon, pictured February 12, 2013, at Eastside Veterinary Hospital in Clermont, Florida, was born without the use of his hind legs. Last month, the pig’s owner turned the piglet over to a Clermont vet who decided to help the little guy. Dr. Len Lucero took the pig home and made a wheelchair for him using toy parts. (Tom Benitez/Orlando Sentinel/MCT

Adorable Baby Koala Poses for Her Very First Photoshoot
Probably, this is Сalled “Lucky”...
Brave Boy Risks Own Life to Save a Baby Deer from Drowning
This Cat and Dog Duo Love Travelling Together And They Take The Best Pictures
An Enormous Crocodile Mauls a Young Hippo in South Africa
Someone Replaced The Dinosaurs In Jurassic Park With Ferrets, And It’s The Remake You Didn’t Know You Wanted
Dog Photographer Of The Year 2017 Winners
Dogs Ease Namibia's Cheetah-farmer Conflicts
This Library Attracts The Public By Dressing Up One Librarian’s Cat As Literary And Movie Icons
Catasaurus Rex
Tiger Shark: Close Up
This Clothing Brand Started Selling Matching Sweaters For Dogs And Their Owners And They’re Adorable
Monty the Cat Without a Nasal Bone
What The Bloody Hell Is A … ?: Brilliant Guide To Animals
Curious “Shiba Inu Sticking Their Heads Through Walls” Bath Towel Set Gives You A Patiently Waiting Shower Buddy
Striking Animal Pictures Selected As Finalists Of 2017 Comedy Pet Photography Awards
Want to Take Your Pet Fish for a Walk? There’s a Bag for That!
Ugly Medieval Paintings Of Cats
Misbehaving Goats That Were Forced To Wear Pool Noodles & Tennis Balls For Everyone’s Safety
This Fox Thinks He’s A Dog
Living with Tigers
Photographer Documents Chickens, And They All Look Like Supermodels
College Professor Is Making Flower Crowns For Animals And They Look Majestic
Albino Alligators at the Tropical Aquarium in Paris
Flocks of Sheep Take over London's Savile Row
"Spring And A Girl": Cute Friendship Between A Snow Fox And A Human
This Photographer Took Dogs From A Shelter And Created Another World For Them
Sharon Montrose's Animal Prints On Display
A Portrait Of Lost Habitats In Africa
Demonic Glowing Eyed Cats And How To Photograph A Feline
animals, injured, moving, prosthetics