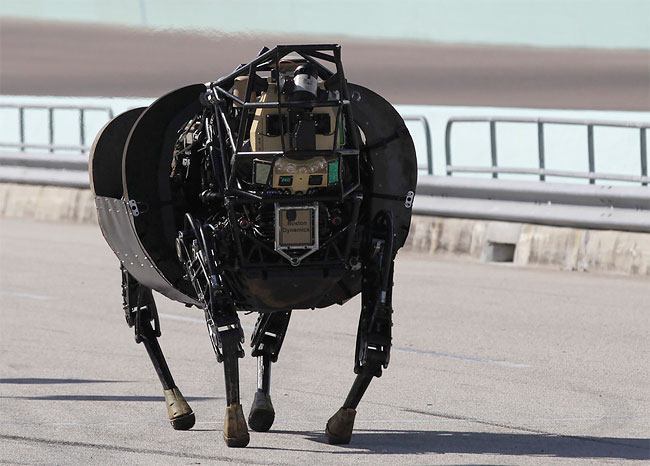 An LS 3 (Legged Squad Support System) robot demonstrates its movement, showing it is designed to accompany soldiers and Marines any place they go on foot, helping to carry their gear, during a demonstration in Homestead, Florida December 20, 2013. The south Florida city is hosting an international Robotics Challenge Trials this weekend, organized by the U.S. Defense Advanced Research Projects Agency (DARPA). The competition, for the creation of robots that can respond to natural and man-made disasters, was created following the 2011 Fukushima-Daiichi nuclear power plant disaster in Japan. After the disaster the Pentagon sent robots designed to disarm improvised explosive devices in Iraq to try to help fix problems at the destroyed reactor in areas highly contaminated by radioactive releases where humans could not work. (Photo by Andrew Innerarity/Reuters)

Google-acquired Schaft bested 15 others teams competing in a robotics challenge sponsored by the Defense Advanced Research Projects Agency (DARPA), by remotely navigating a sophisticated bot through a series of rescue-themed tasks better than the rest.

Each robot was judged according to four metrics, including mobility and dexterity; ability to manipulate and use tools designed for humans; ability to be controlled by non-experts; and partial-autonomy making task-based decisions. This semi-final round focused primarily on mobility, dexterity and manipulation.

The event organizers cited the Fukushima nuclear meltdown as one specific incident where sophisticated robots could have made a difference, and contestants were judged on proficiency within 30 allotted minutes in eight tasks that would be useful in a similar disaster:

Schaft’s win is no surprise, as the team released the following video showing its robot completing the difficult tasks ahead of the competition: 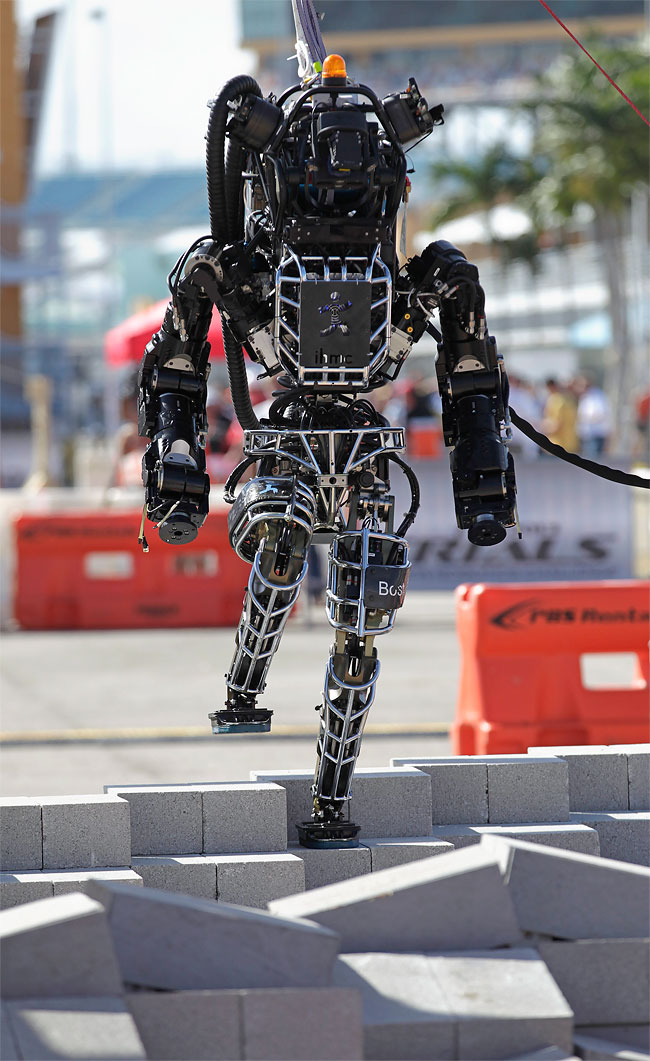 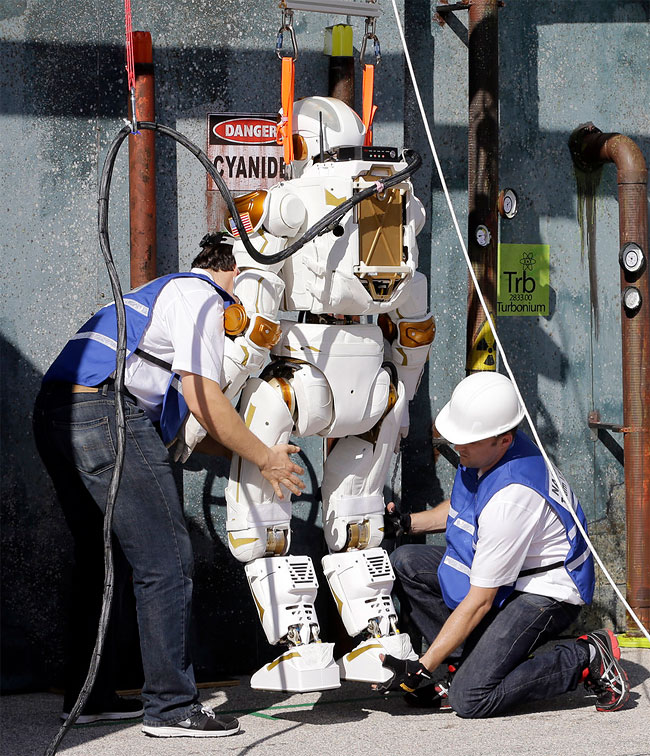 Members of Team Valkyrie, NASA Johnson Space Center, try to repair Valkyrie after it stopped responding during the wall task at the Homestead-Miami Speedway, Friday, December 20, 2013, in Homestead, Fla. Seventeen teams from the United States, China, Japan, and Korea are participating in the DARPA Rpbotics Challenge Trials. The event is a test of some of the most advanced robots in the world. (Photo by Alan Diaz/AP Photo) 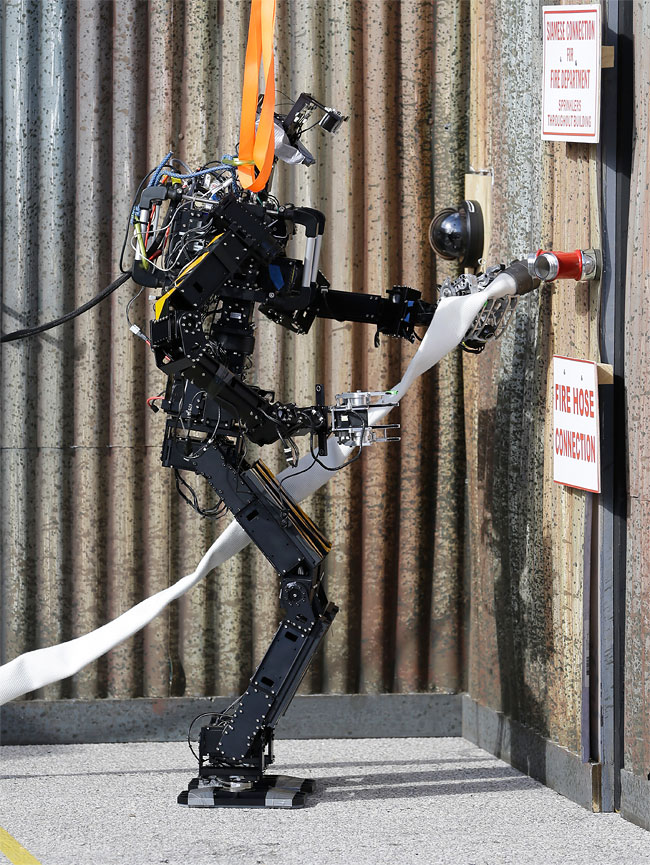 Thor, Virginia Tech College of Engineering, Robotics and Mechanisms Laboratory, tries to connect the hose to a firehose connection during the hose task at the Homestead-Miami Speedway, Friday, December 20, 2013, in Homestead, Fla. (Photo by Alan Diaz/AP Photo)

Recycling Grandma's Replacement Parts
Lady Gaga Unveils 'Flying Dress'
11 Unused E34 BMW 5-Series Have Been Unearthed In Bulgaria
Ibuki Is The 10-Year-Old Android Child That Will Haunt Your Dreams
Historic Building on the Move
Electroluminescent Tree by Ian Hobson
Everyday Things That Look Totally Different Under A Microscope
Japanese Researchers Grow Mouse Sperm To Help With Human Infertility
Hot Ninja - Multifunctional Network Device For Autonomous Activity In The City Environment
A Controversial Ad Shows Female Tech Founders And CEOs Coding In Their Underwear
Made in China: Chinese Inventions, Part 2
Beautiful Photos of the 1953 Cadillac Le Mans
Streamliners: Locomotives And Bullet Trains In The Age Of Speed And Style
Art from Wi-Fi Signals
Flashing Falsies: Will LED Eyelashes Be The New Beauty Trend?
Humanoid Robots at the National Museum of Emerging Science and Technology
China's 'Jade Rabbit' Rover Lands on Moon - First Photos
Photographer Benedict Redgrove Given Unprecedented Access To NASA Technology
Very Easy Rider
1960 Ford Spaceliner, a Vehicle That Looks a Bit Like a Spaceship From a Science-Fiction Movie
"Harmony Of The Seas" - The World's Largest Cruise Ship
Inside Opower's Arlington Office: A robot, a Scooter and Many, Many Couches
This Guy Used A.I. To See What The Kids Of Famous Ex-Couples Would Have Looked Like
Air Clicker
"Goodbye, Diesel Train": This Brutal Soviet Bad Boy Has Been Destroyed In Estonia
IKEA Pee Ad: Retailer’s Controversy Ad Acts As A Pregnancy Test
Malls In Thailand Replace Lift Buttons With Foot Pedals To Contain Coronavirus Spread
Hilarious Personal Computer Ads From The 1980s
Robot Dogs Are Remarkably Easy To Defeat Thanks To These Weak Spots
Richard Branson and US Officials Dedicate Space Terminal
contest, darpa