Photo of the Day: Big Brother is Watching You 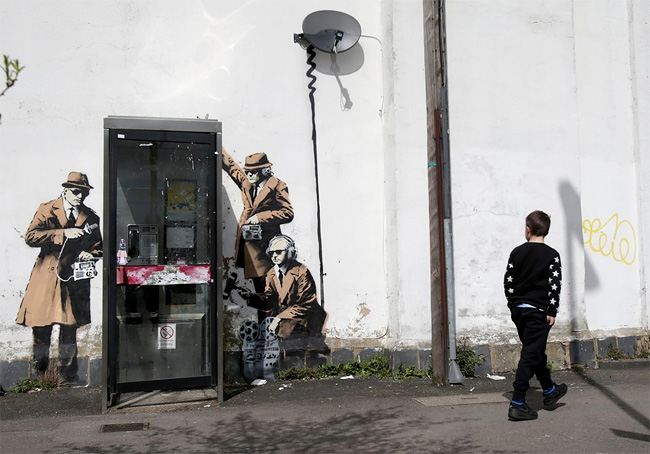 A boy walks past a piece of new graffiti street art, claimed to be by the secretive underground guerilla artist Banksy, which appeared on the side of a house in Cheltenham this weekend, on April 14, 2014 in Gloucestershire, England. The artwork, which shows three stencil figures listening into a conversation in an existing telephone box, is just a few miles away from Government Communications Headquaters (GCHQ), which is responsible for providing intelligence and information assurance to the British Government and Armed Forces. (Photo by Matt Cardy/Getty Images)

Fascinating Surreal and Conceptual Photos by Dasha Pears
Photo of the Day: Between a Frozen Hills
An Artist Infused Colour Into A 100-YO Black & White Photo And The Result Is Beyond Stunning
Colorful, Playful And Dreamlike Photo Manipulations By Jose Navarro
Photo of the Day: Family Portrait
The Adorable Photo Series Shows Curvy Canines And Flexible Felines Participating In A Spot Of Yoga
Photo of the Day: The BeeOs
Photo of Holden Crater on Mars
Photo of the Day: Batman and Kids
A Bear's First Photo Shoot: Adorable Cub Ayra Strikes Comical Poses As She Balances On Two Legs
2007 ‒ 2022 by Design You Trust. Proudly hosted by WebHostingBuzz.
Privacy Policy · Terms of Service · Content Removal Policy ❤️ 🇺🇦