Some Crazy Ways Couples Got Married 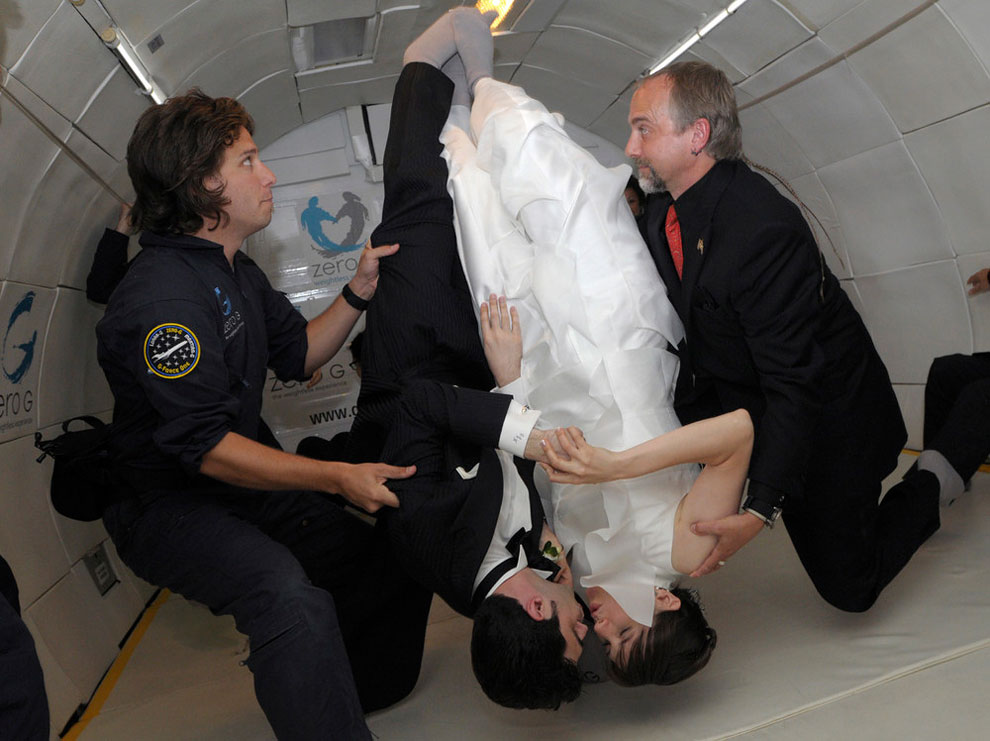 Bride Erin Finnegan and bridegroom Noah Fulmor, both of New York, are helped by Zero Gravity Corporation co-founder Richard Garriott (R), and Bryan Rapoza as they seal their wedding with a kiss, while floating upside down, during the first weightless wedding aboard a specially-equipped Boeing 727, while flying over the Gulf of Mexico after taking off from Titusville, Florida, June 20, 2009. Finnegan and Fulmor floated into matrimony on Saturday thousands of feet (metres) above the Gulf of Mexico in what organizers said was the world’s first weightless wedding held in zero gravity conditions. To recreate the weightless experience without going into space, the plane executed parabolic flight maneuvers, climbing sharply and descending several times during the one-hour flight. (Photo by Phelan Ebenhack/Reuters) 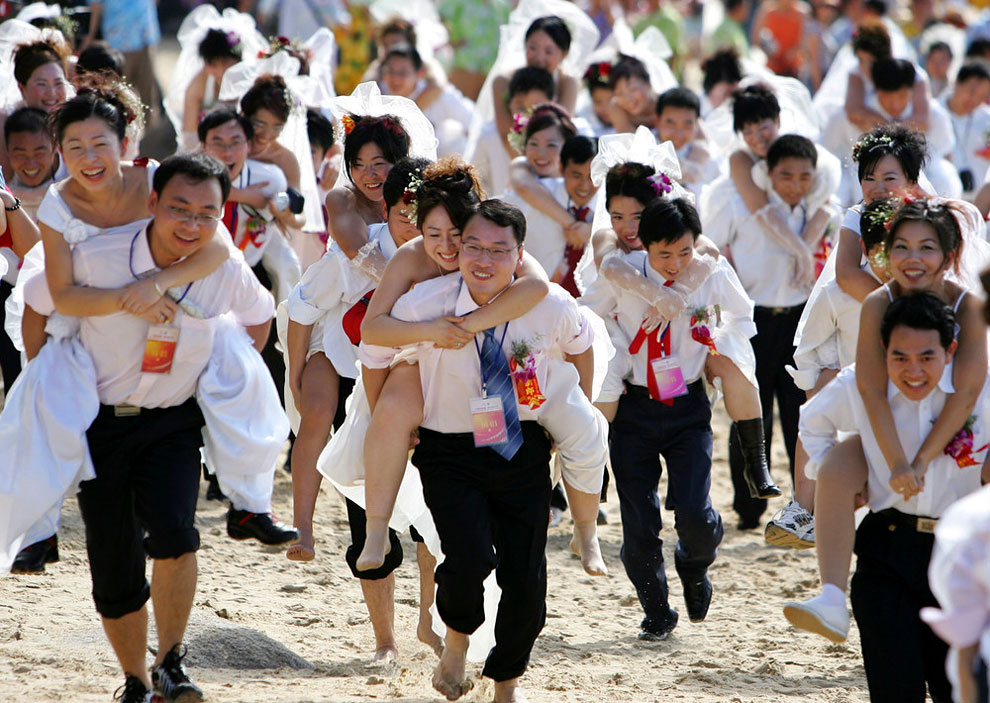 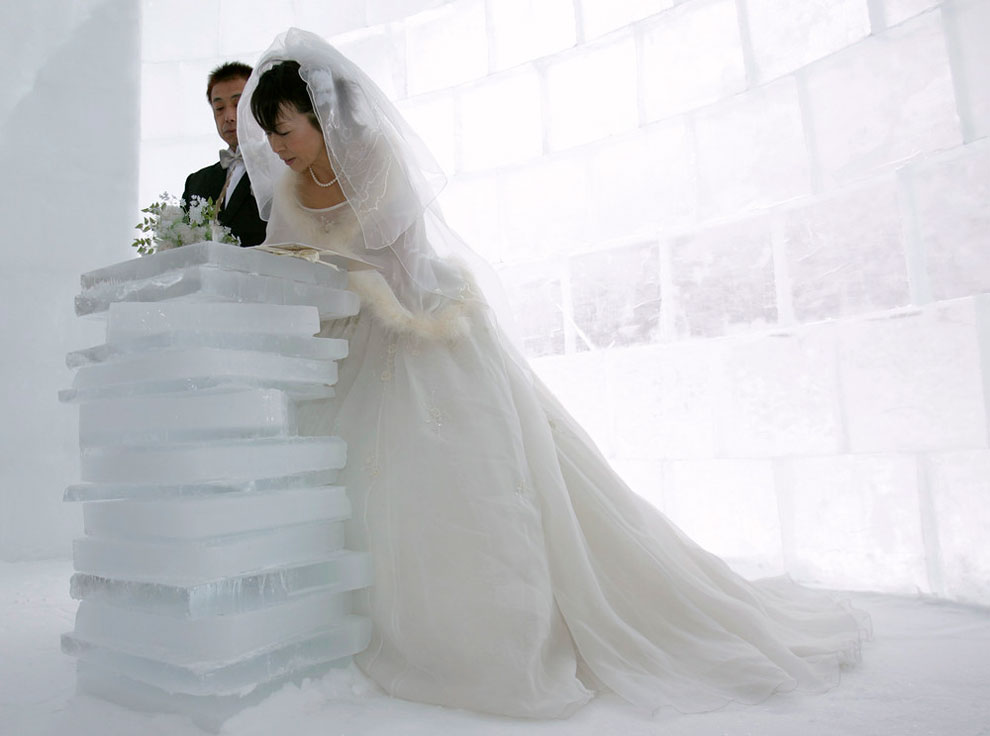 Akemi Kito signs a covenant as her groom Hiroshi Matsuoka looks on during their wedding ceremony inside a chapel made of ice at the “Igloo village” on Lake Shikaribetsu in Shikaoi town in Japan’s northern island of Hokkaido February 14, 2007. (Photo by Yuriko Nakao/Reuters) 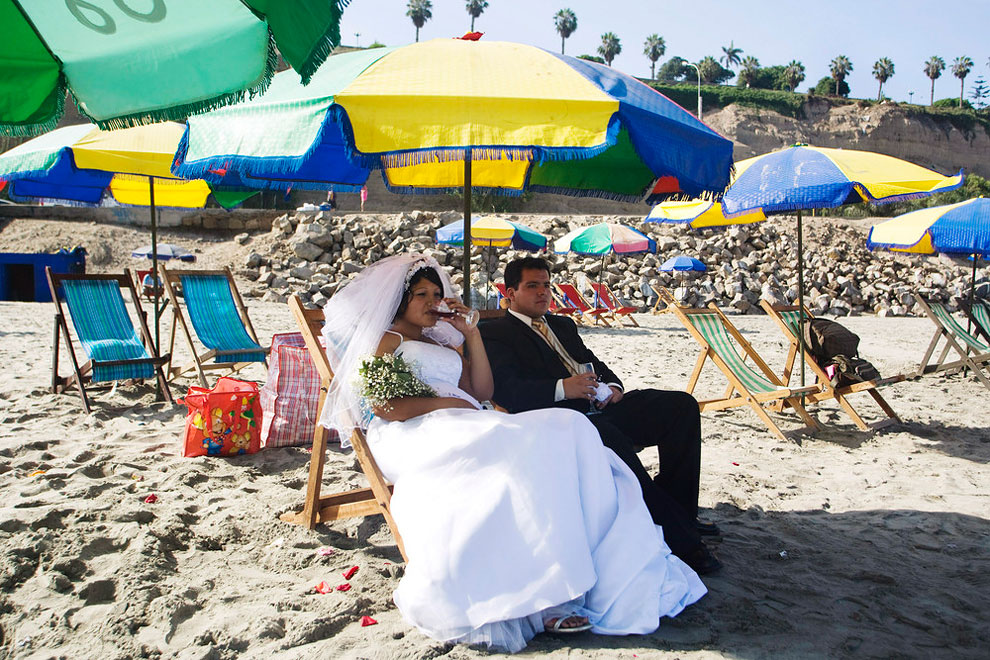 A bride and a groom rest before a ritual with shamans for Saint Valentine’s Day at a beach in Lima Febraury 12, 2010. (Photo by Enrique Castro-Mendivil/Reuters) 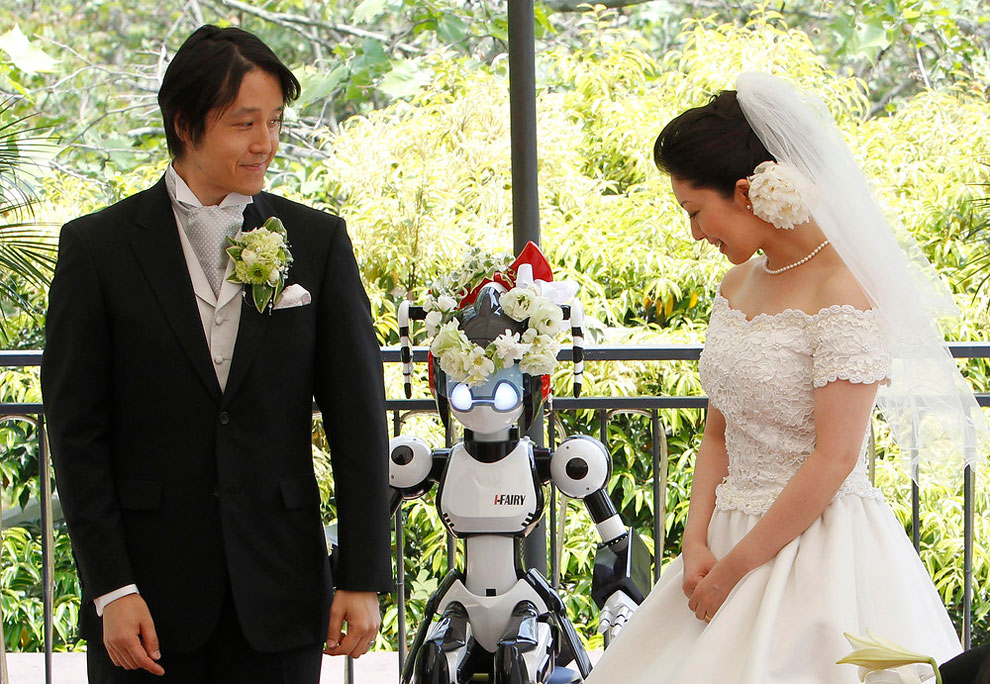 A humanoid robot named “I-Fairy” (C) acts as a witness at the wedding ceremony between Tomohiro Shibata (L) and Satoko Inoue in Tokyo May 16, 2010. The couple decided to use the robot, which conducted the ceremony with its audio functions, from Inoue’s company to perform the witness’ duties as they first met due to common work interest related to robots. (Photo by Yuriko Nakao/Reuters) 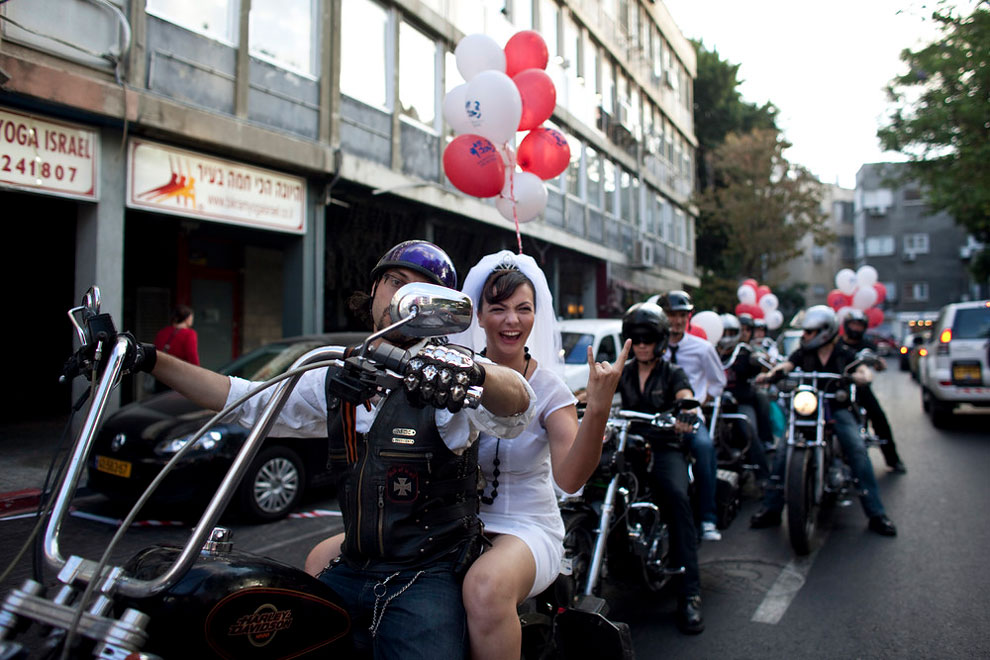 Bride Yulia Tagil sits on the backseat of a bike as she arrives for her alternative wedding ceremony on a square in Tel Aviv July 25, 2010. The alternative wedding ceremony was intended to demonstrate against the current situation in Israel, where the only way for Jews to get married by law is through the Chief Rabbinate. (Photo by Nir Elias/Reuters) 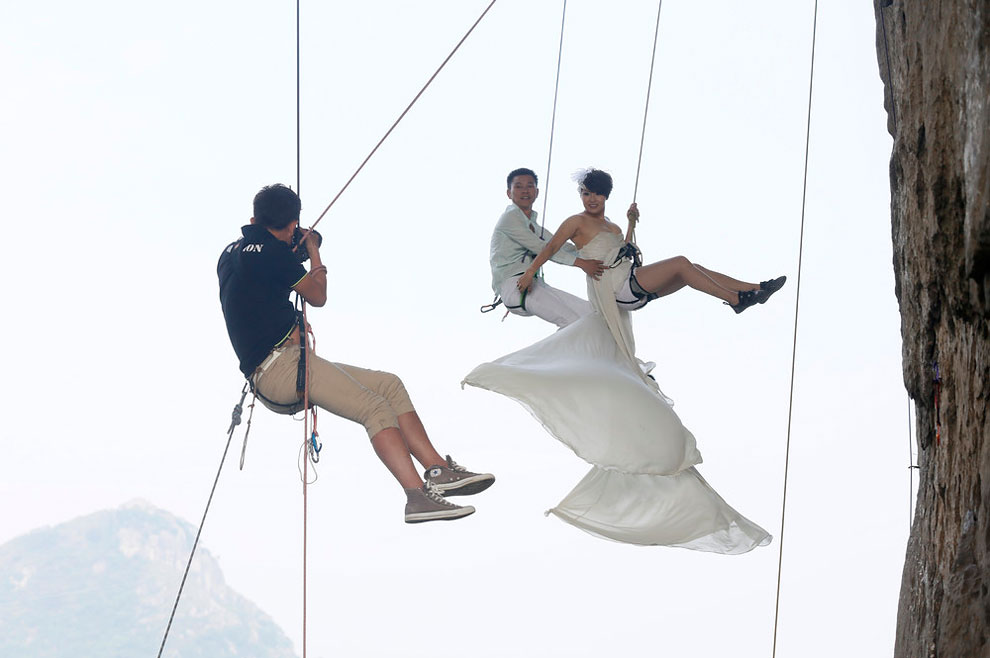 A photographer takes pictures of Fang Jing (R) in a wedding gown next to her husband, surnamed Zhao, as they hang from a cliff during a rock climbing exercise in Liuzhou, Guangxi Zhuang Autonomous Region October 26, 2013. The couple love outdoor sports and they decided to have their wedding photos taken during rock climbing, local media reported. (Photo by Reuters/Stringer) 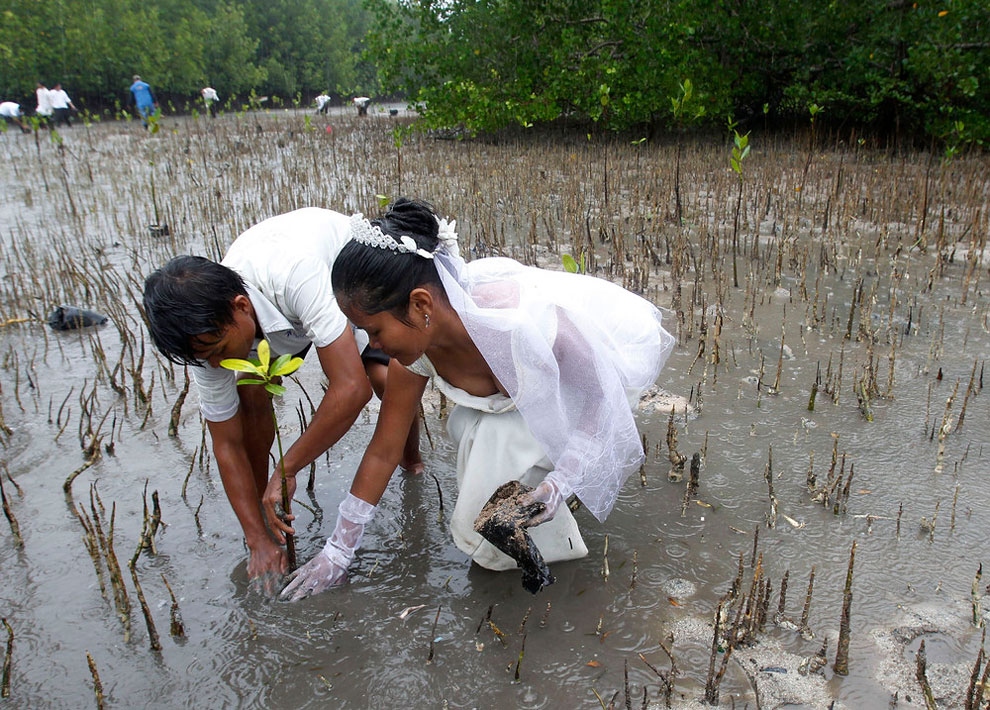 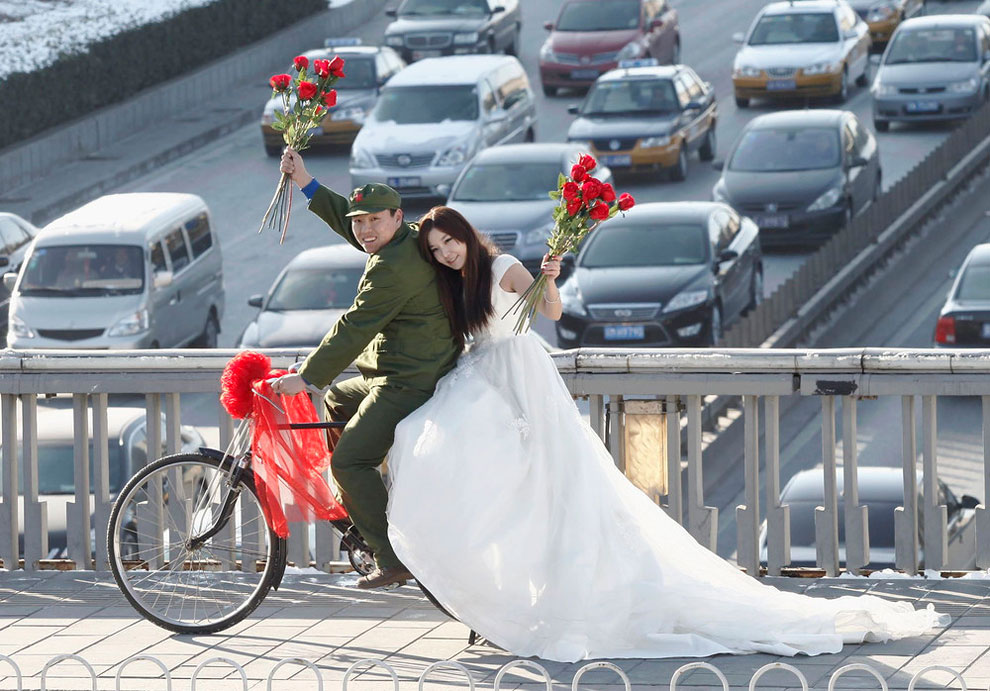 An engaged couple sits on a bicycle as they pose for wedding photographs to the theme of “naked wedding”, on a pedestrian bridge on Valentine’s Day in central Beijing February 14, 2011. “Naked wedding” is a popular new expression in China which means young couples get married with no houses, cars or little bank savings. (Photo by Reuters/China Daily) 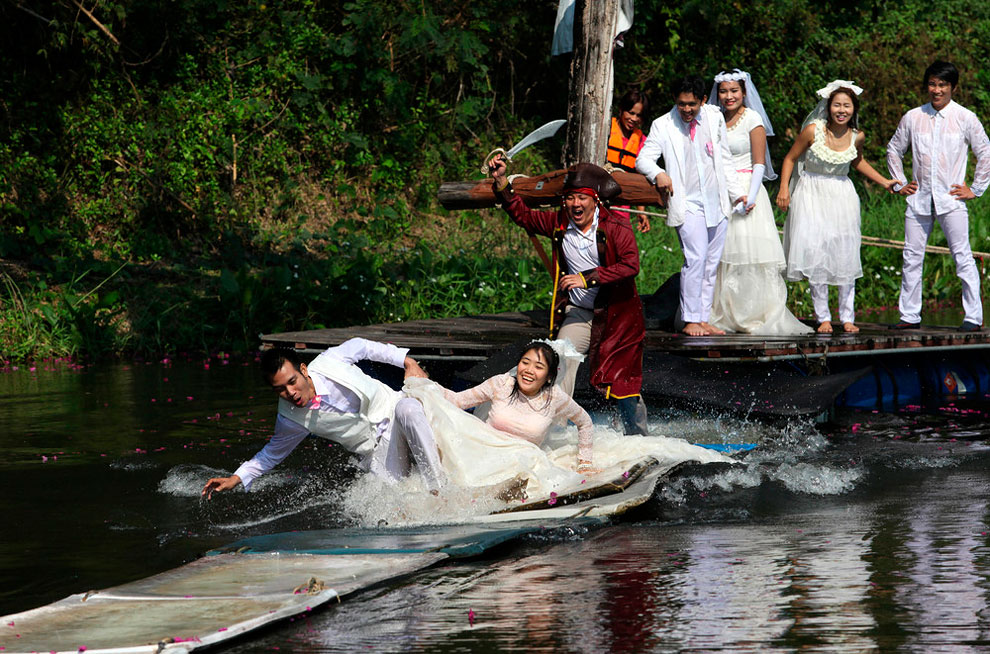 Thai groom and bride, Sorawich Changtor (front L), 28, and Rungnapa Panla (front R), 30, run to escape a man dressed as a pirate as (behind L-R) Prasit Rangsiyawong, 29, Varuttaon Rangsiyawong, 27, Chutima Imsuntear, 37, and Sopon Sapaotong, 41, look on during a wedding ceremony in Prachin Buri province, east of Bangkok February 13, 2013. Three Thai couples took part in the wedding ceremony arranged by a Thai resort that aimed to strengthen the relationships of the couples by doing fun activities. (Photo by Kerek Wongsa/Reuters) 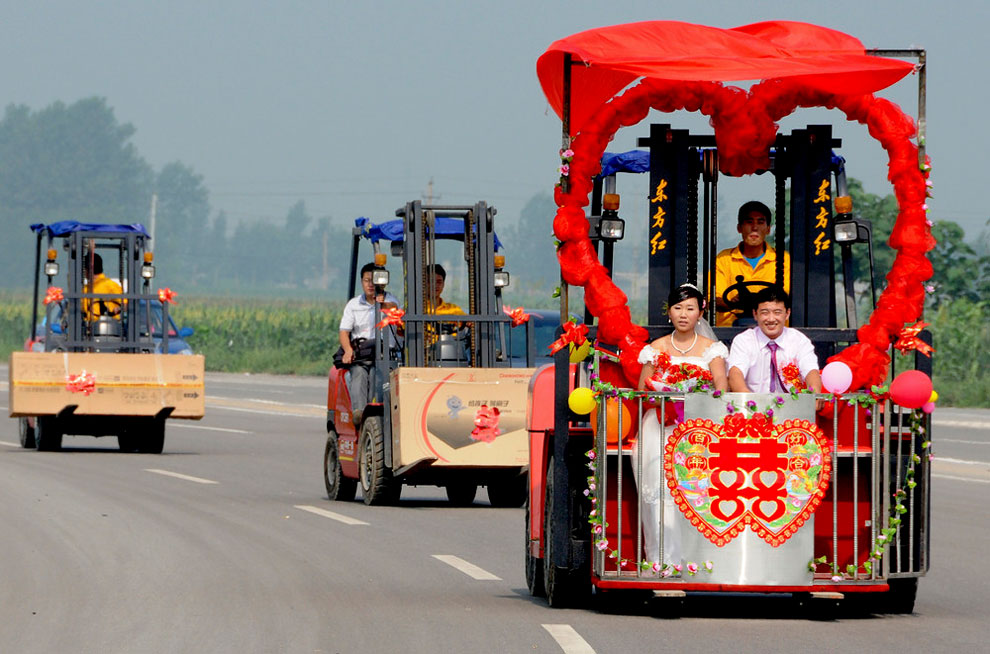 Bridegroom Kong Qingyang and his bride Shen Likun sit on a forklift, which is transformed into a wedding car, during their wedding in Xingtai, Hebei province, August 3, 2011. Kong, a former forklift driver, met his bride Shen, who was a forklift seller, while buying a forklift from her. (Photo by Reuters/China Daily) 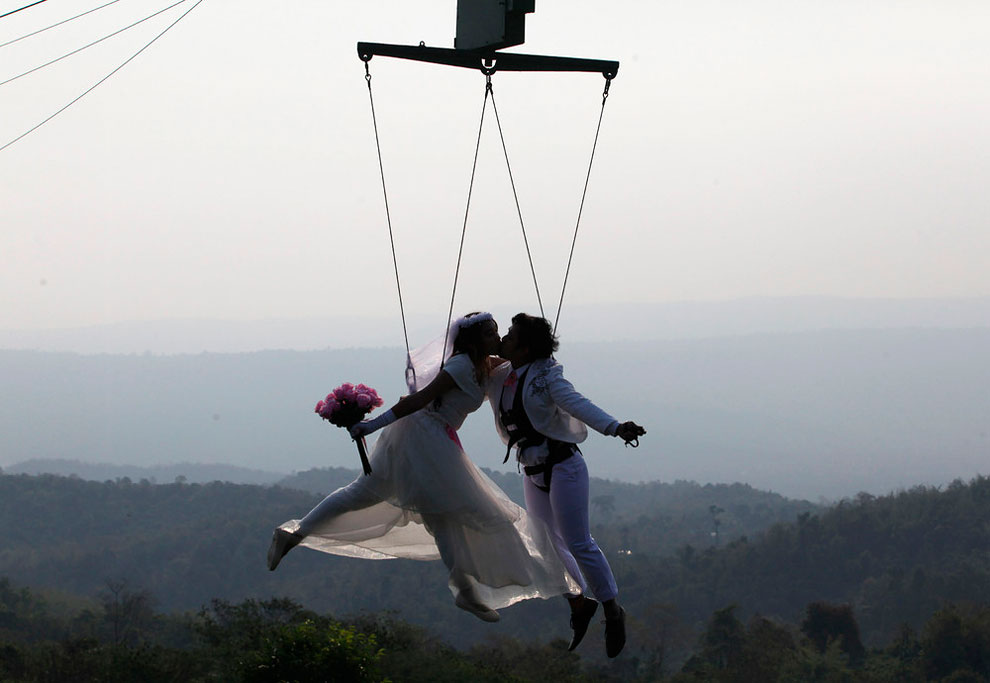 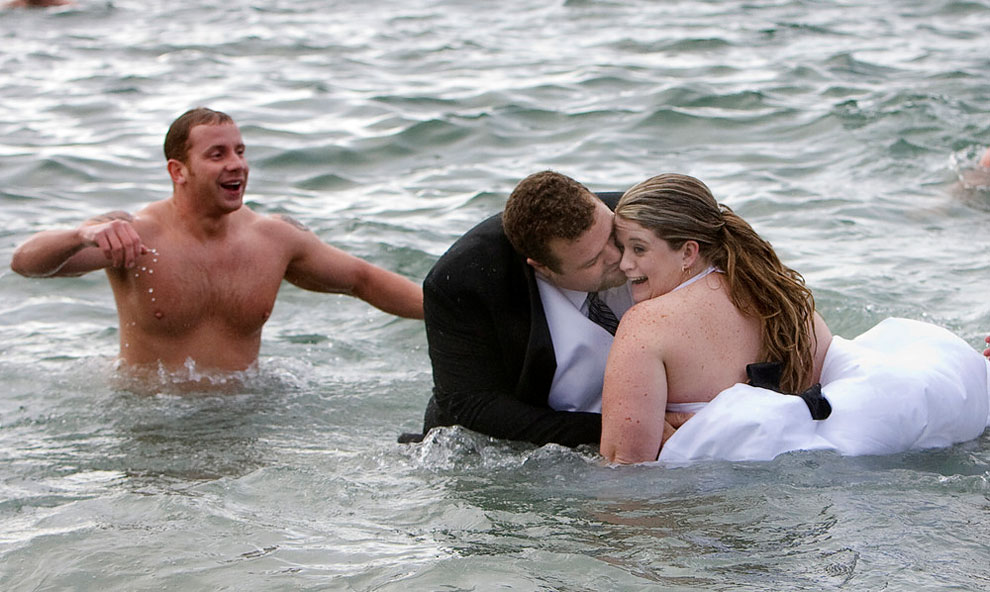 Gerhard Pyper (C) kisses his new bride Jan in the waters of English Bay after taking part in the 89th annual Polar Bear Swim in Vancouver, British Columbia January 1, 2009. The couple celebrated their wedding the night before with a cold swim in the bay. (Photo by Andy Clark/Reuters) 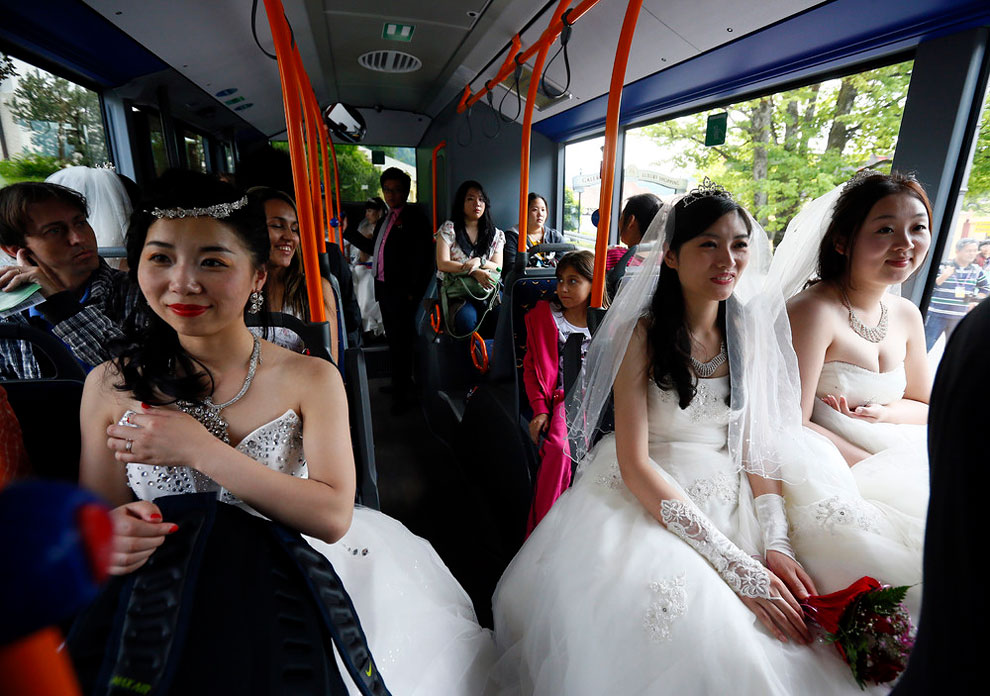 Chinese bridal couples travel on a public bus to the Neuschwanstein castle after their symbolic wedding in Fuessen May 31, 2012. Some 15 Chinese couples who already married in China, travelled to Germany to repeat their promise of marriage at Neuschwanstein Castle, one of the most popular destinations in Europe. (Photo by Michael Dalder/Reuters) 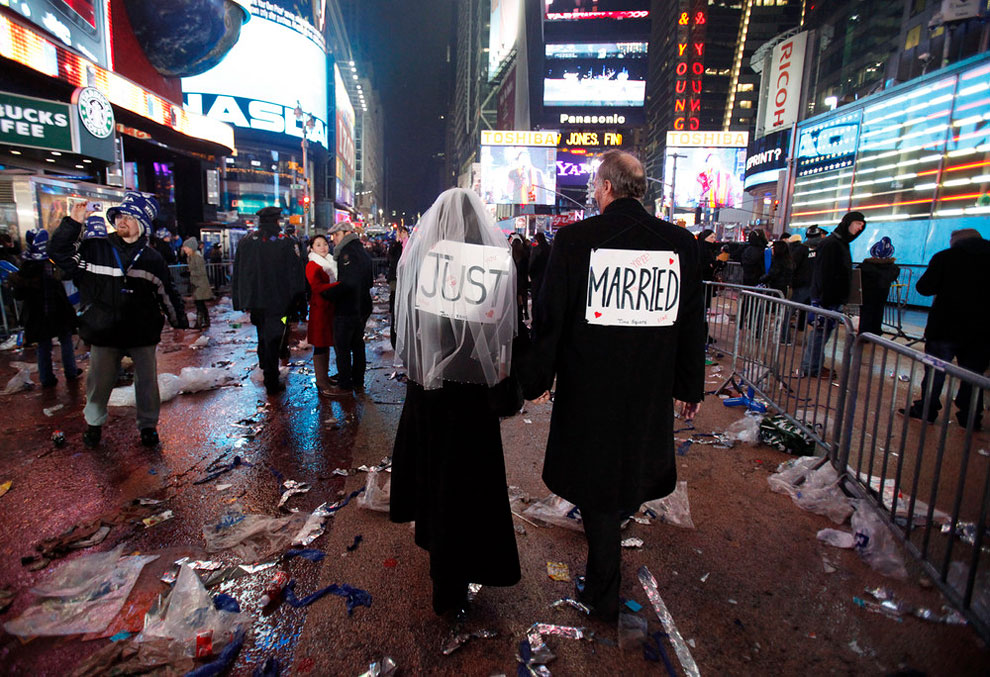 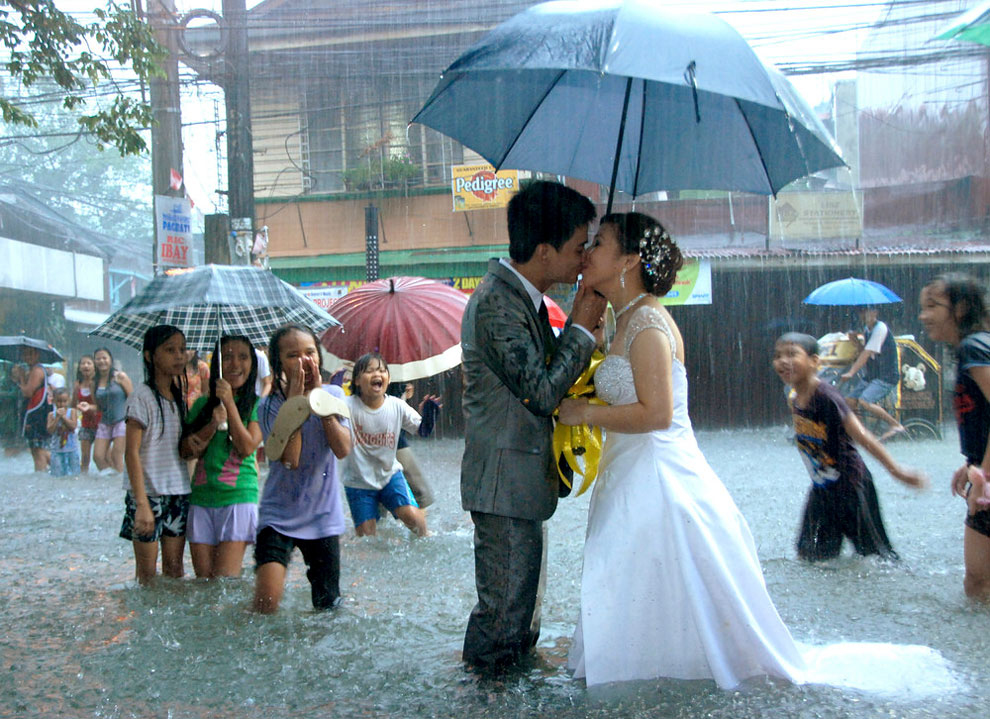 Ramoncito Campo kisses his wife Hernelie Ruazol Campo on a flooded street during a southwest monsoon that battered Manila August 8, 2012. The newly-wed couple pushed through with their scheduled wedding despite severe flooding that inundated wide areas of the capital and nearby nine provinces. (Photo by Reuters/Courtesy of Ramoncito Campo) 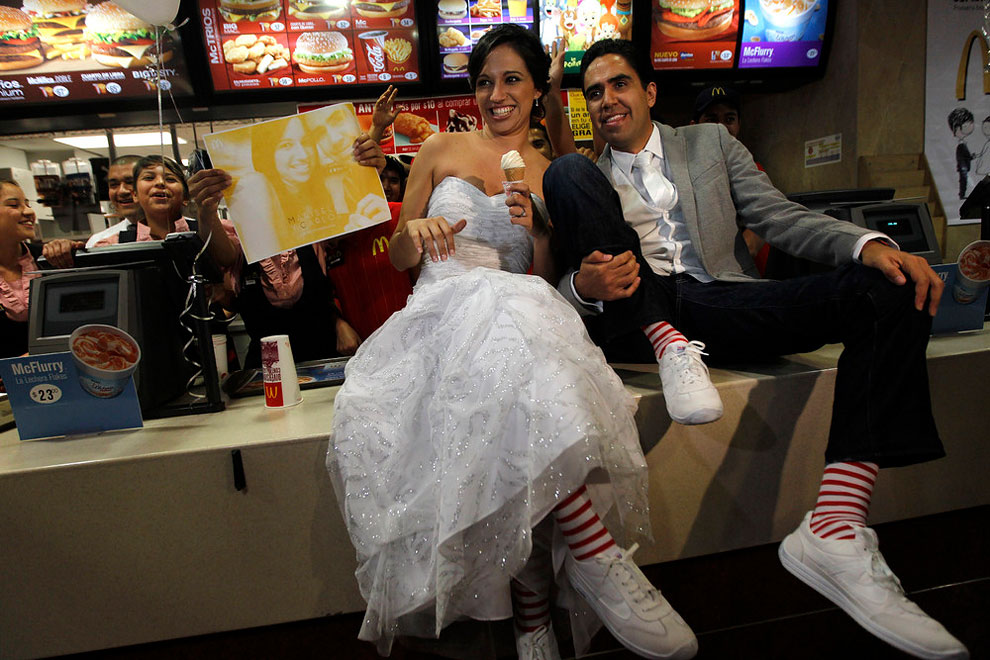 Fast-food fanatics Marisela Matienzo and Carlos Munoz pose for a picture after getting married at a McDonald’s in the suburb of San Pedro Garza, neighbouring Monterrey November 26, 2010. The local franchise for McDonald’s Corp said the wedding was the first in one of its outlets in Latin America. (Photo by Tomas Bravo/Reuters) 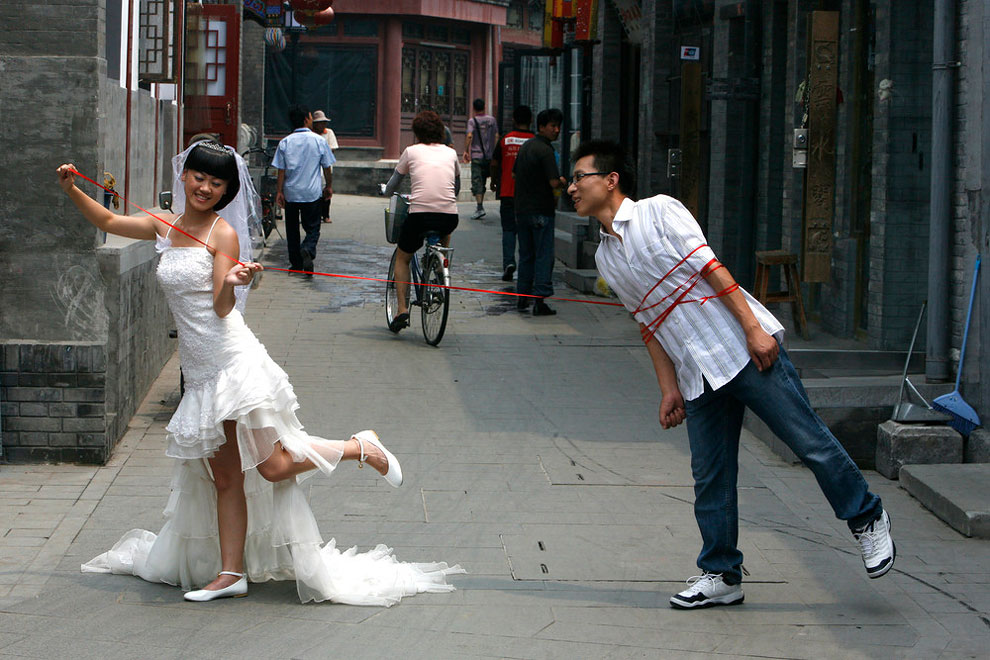 A Chinese couple pose for a wedding photo on a busy alleyway or “hutong” in Beijing July 7, 2008. Marriage registration offices in Beijing predict more than 9,000 couples will get married on August 8 2008, state media reported. The number eight is auspicious in Chinese, as it is pronounced like the word “fa”, which is part of the expression meaning “to get wealthy”. (Photo by Claro Cortes IV/Reuters) 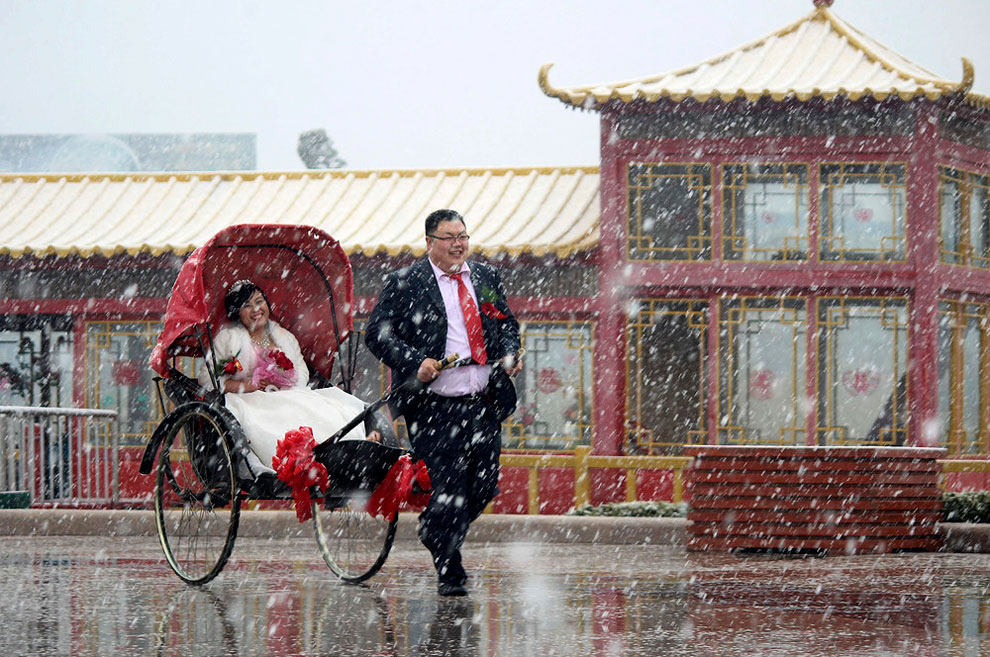 A man pulls a rickshaw carrying his wife in a wedding gown during their wedding ceremony amid snowfall in Weihai, Shandong province March 30, 2013. (Photo by Reuters/Stringer) 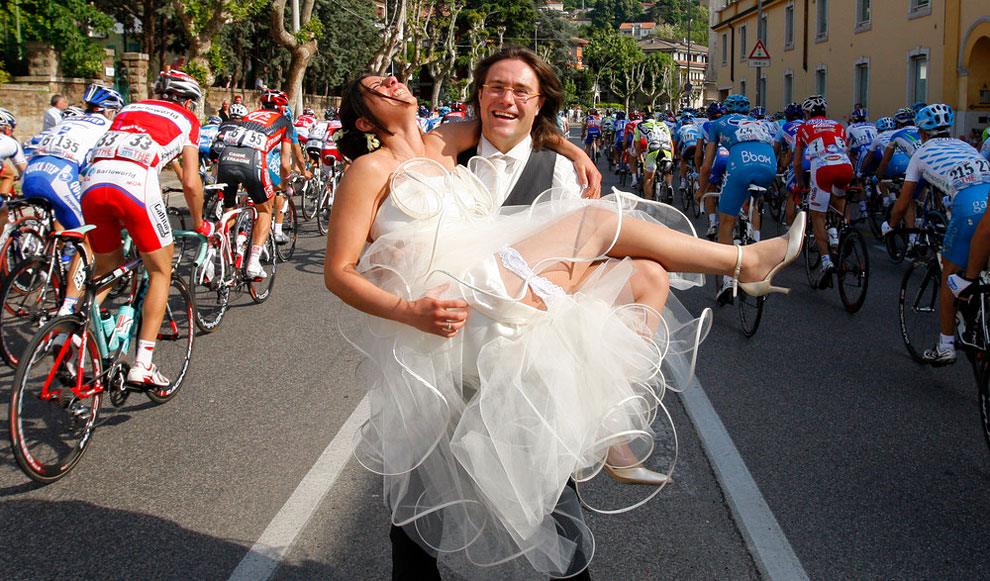 A newly-wed couple pose as cyclists ride past during the second stage from Jesolo to Trieste of the Giro d’Italia, May 10, 2009. (Photo by Stefano Rellandini/Reuters) Divers posing as “Bride and Groom” swim inside an aquarium at an ocean park during an event to celebrate the month of June, the most popular month to wed in Manila, June 6, 2010. (Photo by Cheryl Ravelo/Reuters)