“Michael Jackson, the performer, consistently transcended racial and gender perceptions; Michael Jackson tribute artists, impersonators and lookalikes reflect this in that they embody a wide span of inspiration and intention. The current crop of impersonators are people who take great care in their appearance – some spend a lot of money and time on their make up and clothing, while others are more concerned with the physical gestures associated with his dances while expressing very little concern in the creation of an illusion.

“The Michael Jacksons” is a study of people from around the US who make a living or perform as Michael Jackson. The project is both an index of the refraction of Michael Jackson’s public persona, and a look the exploration issues of fantasy, reality and representation as influenced by and filtered through cultural experience. Ultimately the project is a quest to photograph the tribute artists, impersonators and lookalikes in the aftermath of Mr. Jackson’s death, and along with a written ethnography which focuses on the interpretation of “blackness” by the performers, is intended to interpret, understand and evaluate what seems to be an emerging subculture within the world of professional mimicry”. – Lorena Turner 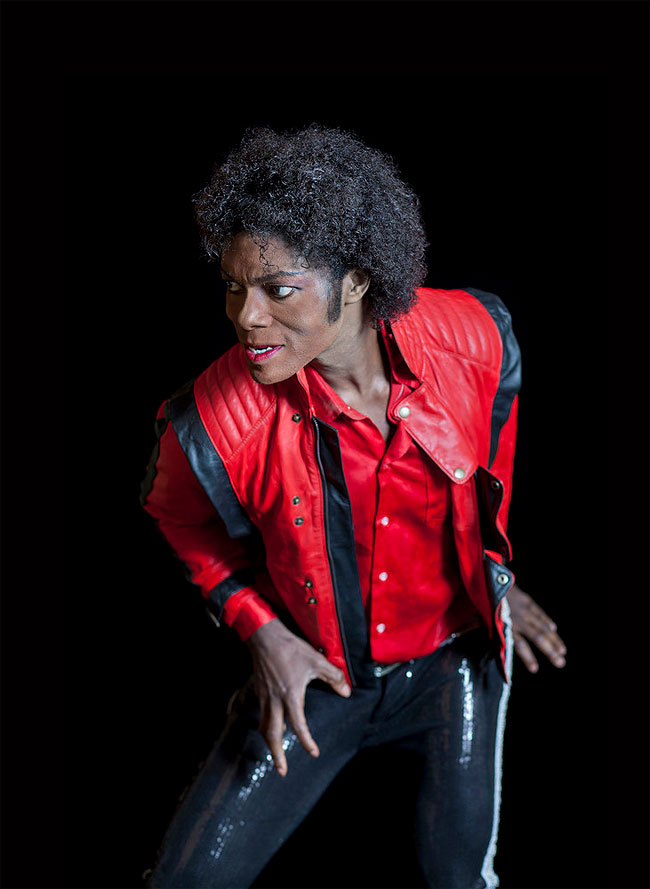 Rameau primarily works as Michael Jackson by posing with tourists on Hollywood Boulevard where he can $400 to $500 a day, but has traveled internationally as well. In his representation, Rameau works to embody Michael Jackson’s demeanor – someone who is light in spirit with a physical fluidity. When Turner observed him on the boulevard in the fall of 2011, he was trying to save money to put on an autobiographical play about his life as a Haitian immigrant and MJ look alike. (Photo and caption by Lorena Turner) 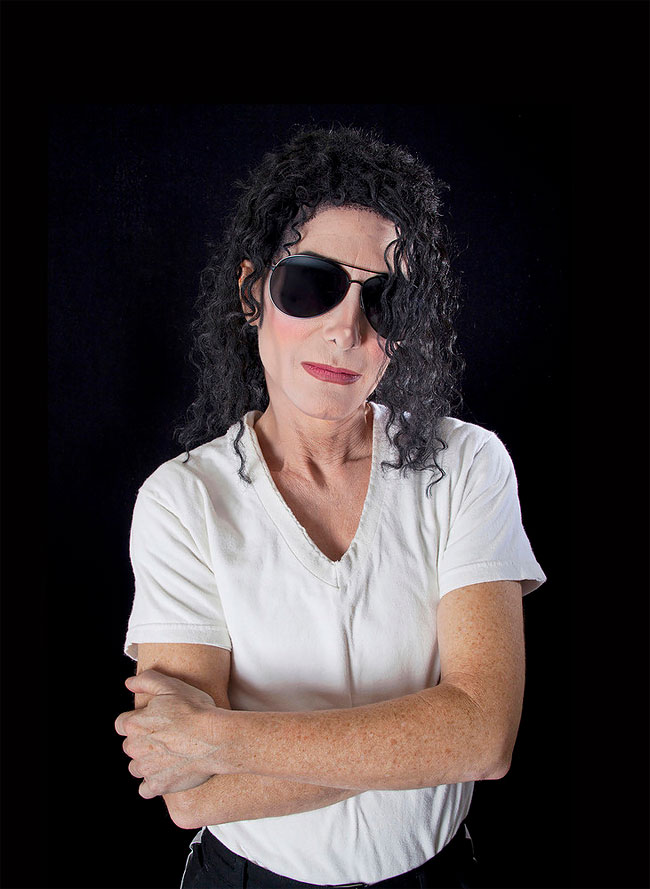 DEV works around San Diego and Los Angeles. She was a ballet dancer and came to performing as Michael Jackson out of interacting with other performers who were female to male drag performers, and out of a geniune appreciation for the man himself. Two years ago she produced “Woman in the Mirror, A Dancer’s Journey”, a one woman show about her experience for which she won a Bravo SD Award. (Photo and caption by Lorena Turner) 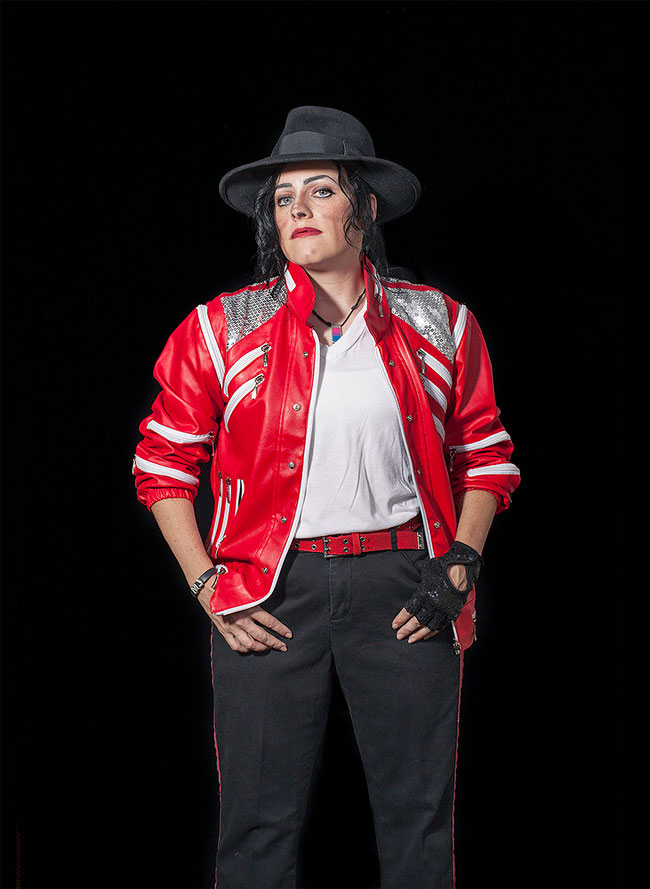 Amerson lives with her two kids and splits raising her kids with her ex-husband. She performs primarily for African-American families at birthday parties and local events. During the “MJ season”, the months of June through the end of October, she can make enough to take care of her family. She makes a habit of returning to the dance floor after each show to pose with every person who wants to be photographed with her. (Photo and caption by Lorena Turner) 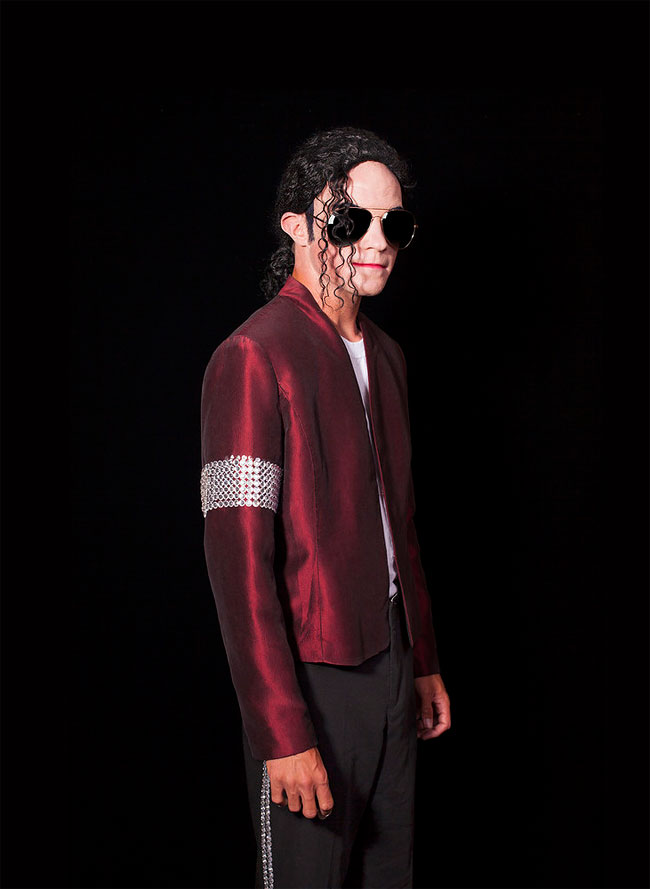 Sean worked for many years as a tribute artist on Hollywood Boulevard and, for a few years, on Fremont Street in Las Vegas. He started his work as a Michael Jackson performer by going door to door in his town in central California offering to dance for people. Sean is strongly committed to his work as Michael Jackson, “…I will be different”, he recently wrote. Currently he’s living and performing in New Castle, PA. (Photo and caption by Lorena Turner) 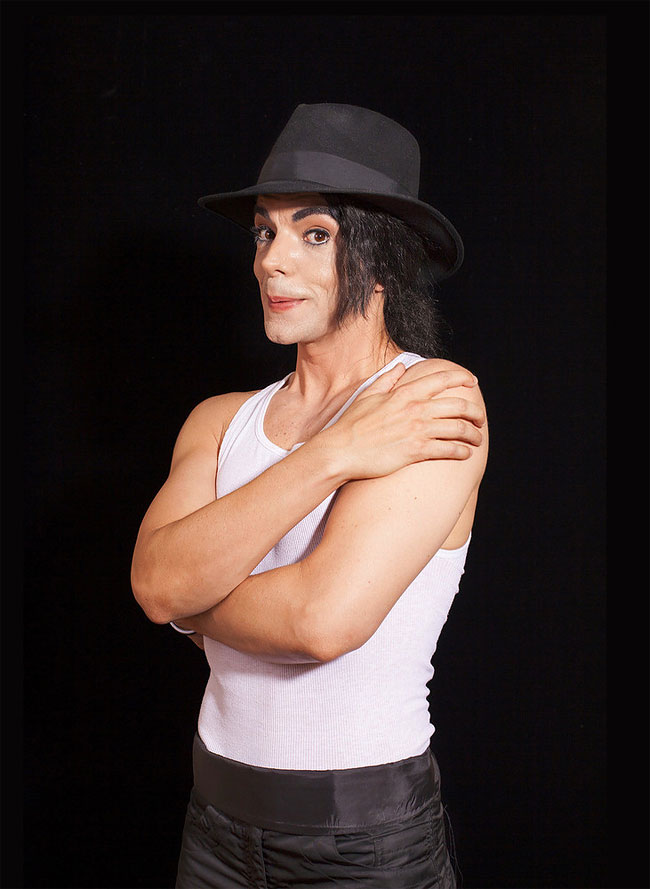 Hunt started working as Michael Jackson after receiving compliments at a Halloween party in his hometown of Fort Worth, Texas. His Michael Jackson is from the 2000s, and like a true lookalike, he uses mannerisms and a voice that he’s styled after Michael Jackson when interacting with his audiences. After working in Las Vegas, he returned to Fort Worth and finds work as an actor. (Photo and caption by Lorena Turner) 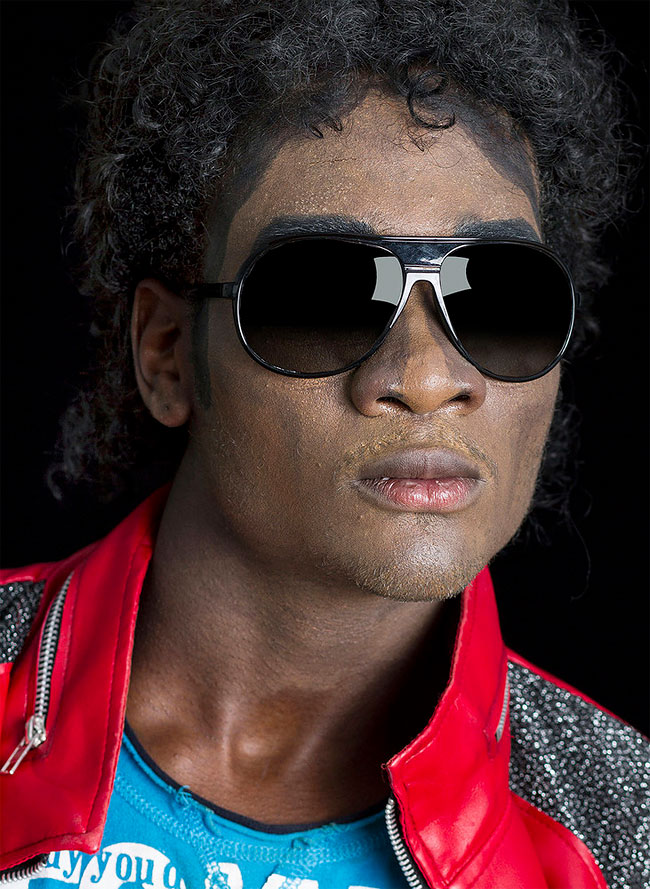 James has a production company called Scooby Productionz and was, for a long time, the only client. He performs at birthday parties and events around Brooklyn and Queens, and also in Times Square in the summer months. (Photo and caption by Lorena Turner) 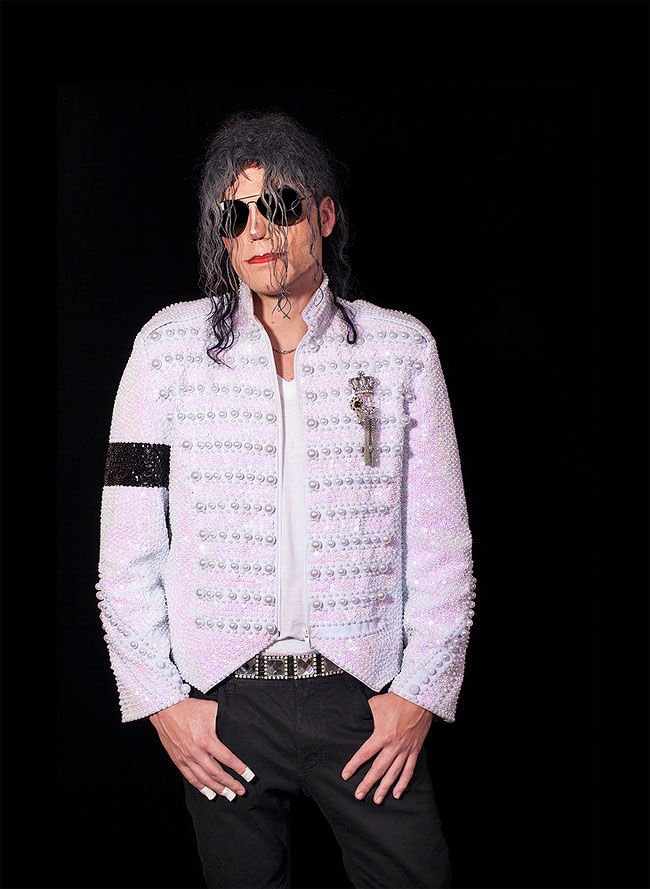 In the summer of 2012, which is when Turner met Lucas, he was in Harrah’s “Legends in Concert” show in Las Vegas performing both the Michael Jackson singing and dancing parts. Lucas also has his own recording career, with his own fan club, and performs in Myrtle Beach and Branson, Missouri. (Photo and caption by Lorena Turner) 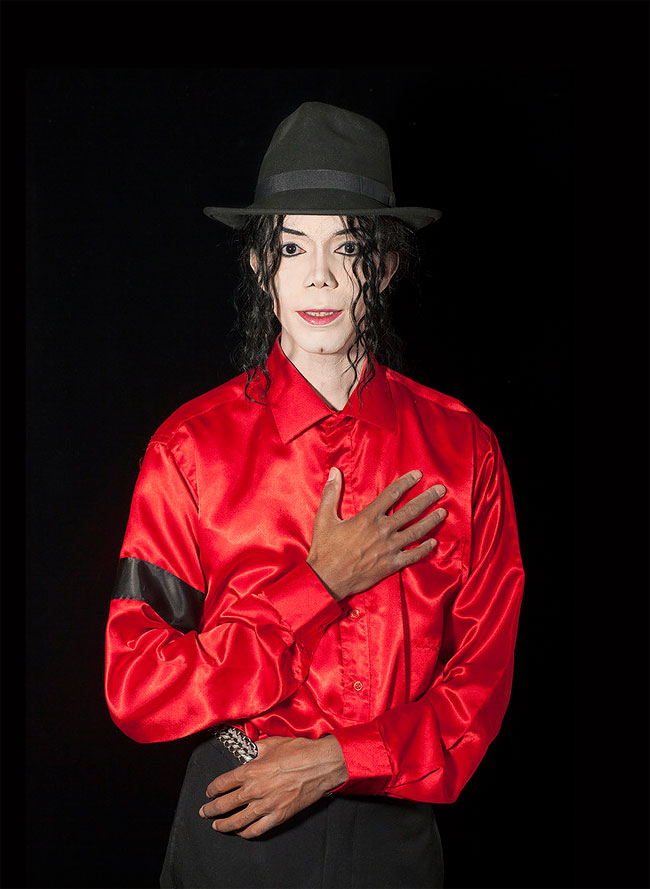 Ryulin has worked posing and performing on Hollywood Boulevard, and in the summer of 2012, was as a celebrity impersonator dealer at the Imperial Palace (now called The Quad) in Las Vegas. He was also the stand-in for Jackson on the poster for “This Is It” the documentary that turned out to be Jackson’s last performances. Since Ryulin is the same height as Jackson was and the image is in silhouette, he is easily taken for MJ. (Photo and caption by Lorena Turner)

Breathtaking WWII Colorized Photos Look Like They Were Taken Yesterday
Photographer Christoffer Relander Captures Colorful Landscapes In Jars
Photographer Dieter Klein Captures The Nostalgic Beauty Of Abandoned Cars Across The Europe And United States
Liverpool In The 1980s: Photographer Dave Sinclair’s Stunning Images Show A City That Refused To Lie Down In The Face Of Adversity
"Rite of Passage": Striking Vintage Photos of Florida Spring Break in the ‘80s
Photographer Jack Davison Captures The Best Actors Of 2019 With A Minimalist And Inventive Approach
Photographer Shows The Power Of Perspective With His Stunning Humorous Pictures
Hilarious Photos Of Chinese Grandmother Posing Like A Model
Photographer Captures Women Reaching The Highest Point Of Physical Pleasure
French World War I Soldier’s Bedroom Untouched For Over 100 Years
The Surfing Trooper
Lovely Vintage Photos Capture People With Their Cats In The Early 20th Century
Great Photos Of Mid-Century New York City By Frank Oscar Larson
Surreal Photos Of Abandoned Houses In The Arctic By Norwegian Photographer Britt Marie Bye
See The Stunning Shots That Won This Year’s Dronestagram Competition
"The Memories Of The Future": Photographer Nuno Assis Captures Fantastic Photos Of Hong Kong
"Stags Hens & Bunnies": Photographer Dougie Wallace Has Captured Blackpool In All Its Profligate Glory
Lingerie Football League Media Call
Amazing Behind the Scenes Photos From the Making of ‘A Nightmare on Elm Street 5: The Dream Child’
50 Completely Weirdest Stock Photos You Won’t Be Able To Unsee
Inside Amazon's Very Hot Warehouse
Dad And Daughter Recreates Iconic Scenes From 73 Famous Movies And TV Series
Amazing Candid Photographs Capture People On The Streets Of New York City In The 1980s
Australia’s Silo Murals Make a Road Trip an Art Odyssey
being, jackson, michael