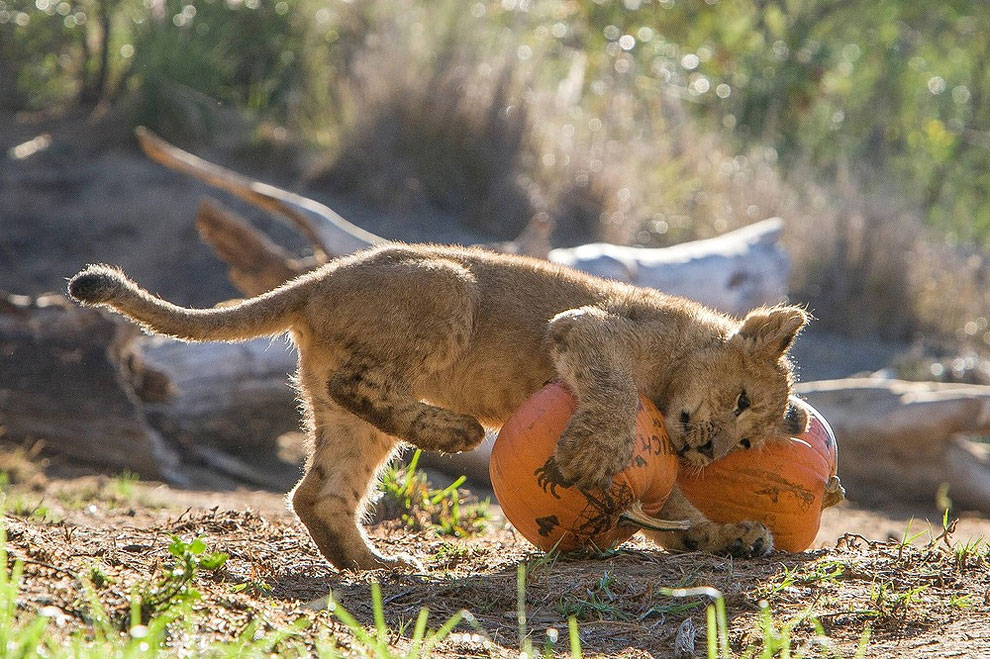 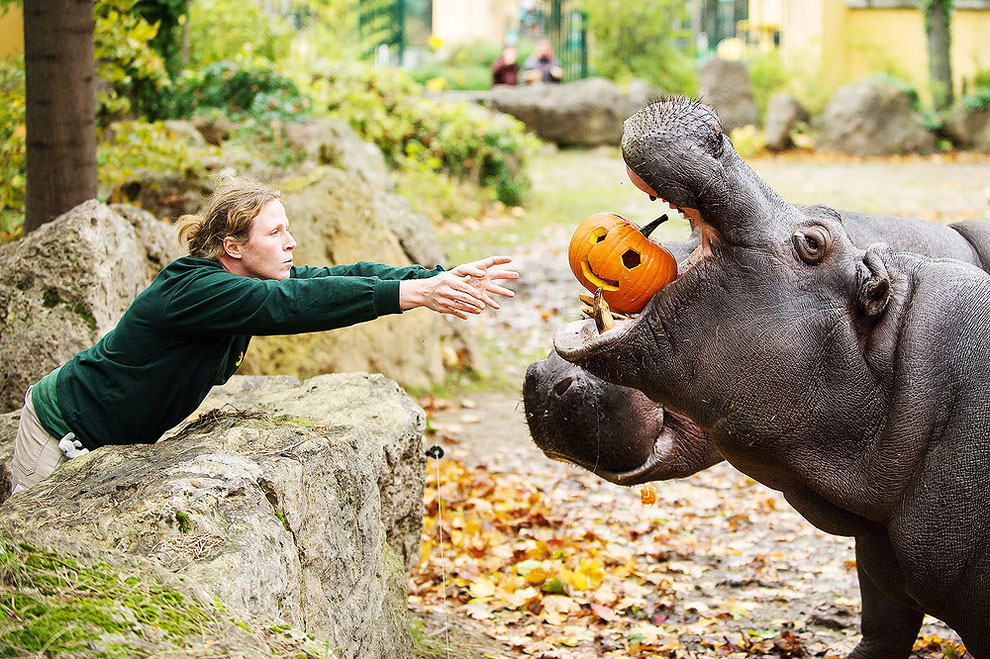 The hippos seem to love the pumpkins. Pumpkin pie might be the order of the day for people this Halloween but now zoo animals are also getting in on the act. Not only is pumpkin served raw or packed with various streets a welcome change in the diet for most zoo animals, but it’s also a great way to interest visitors. (Photo by Daniel Zupanc/EuroPics/Schönbrunn Zoo) 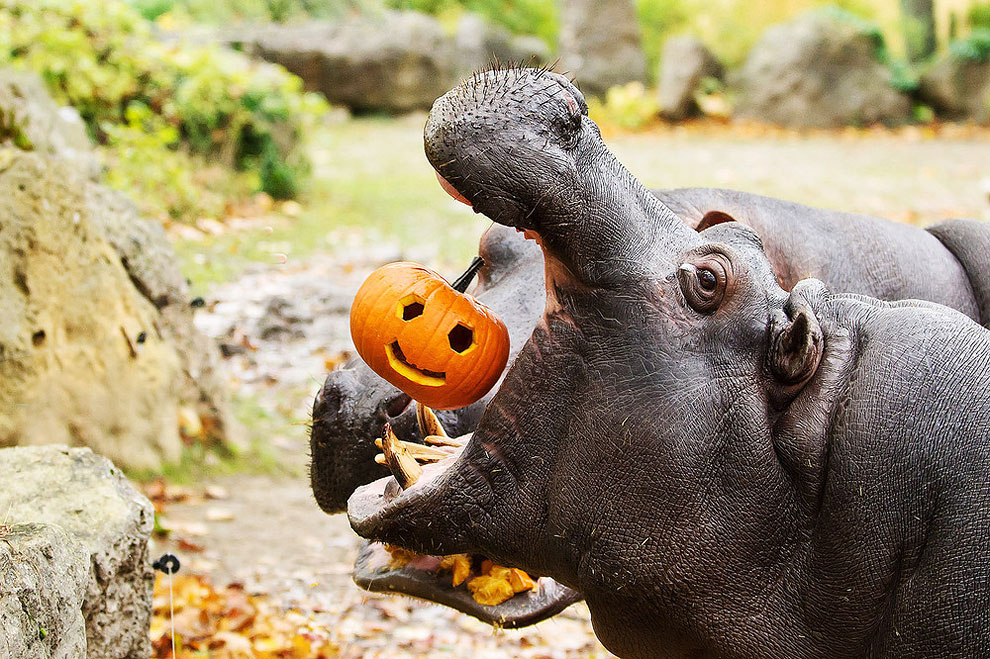 Pumpkins for example at the world’s oldest zoo in the grounds of the Imperial Schönbrunn Palace in the Austrian capital Vienna, artistically carved pumpkins are being snapped up by the zoo animals who clearly seem to welcome the variety and are put off by the scary faces. Zoo director Dagmar Schratter said: “It is all treat, and no trick for our animals”. She said that some of the animals like the elephants and hippos are particular love for pumpkins and can often eat the whole thing in one go. (Photo by Daniel Zupanc/EuroPics/Schönbrunn Zoo) 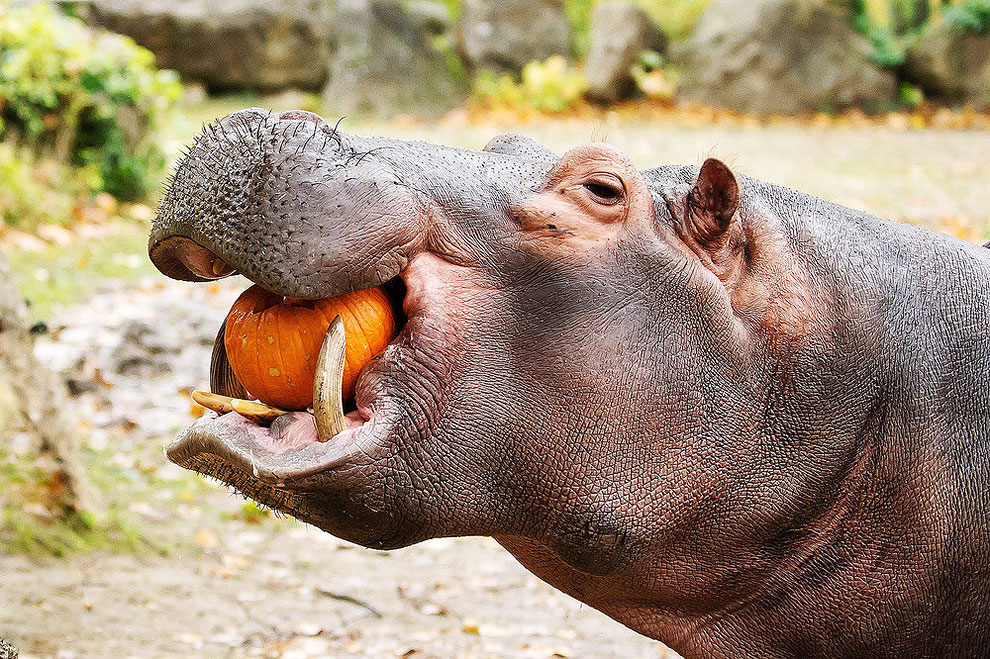 She added: “Others are not so keen but are not left out as their pumpkins are filled with their favourite foods as well such as apples for red pandas and fish for the otters. Some of the smaller creatures like the Colorado toad can climb inside the pumpkin through the mouth and go in search of its favourite treat inside the black beetle larvae. The big meat eaters of the zoo, Lynn and Ranzo the polar bears, have a diet consisting of meat and fish so their pumpkins are filled with cat food which they can scoop out. The pumpkin is just a little bit of seasoning”. And she added the big advantage was that no matter which animal was receiving the pumpkin “it will definitely be good fun for those watching”. (Photo by Daniel Zupanc/EuroPics/Schönbrunn Zoo) 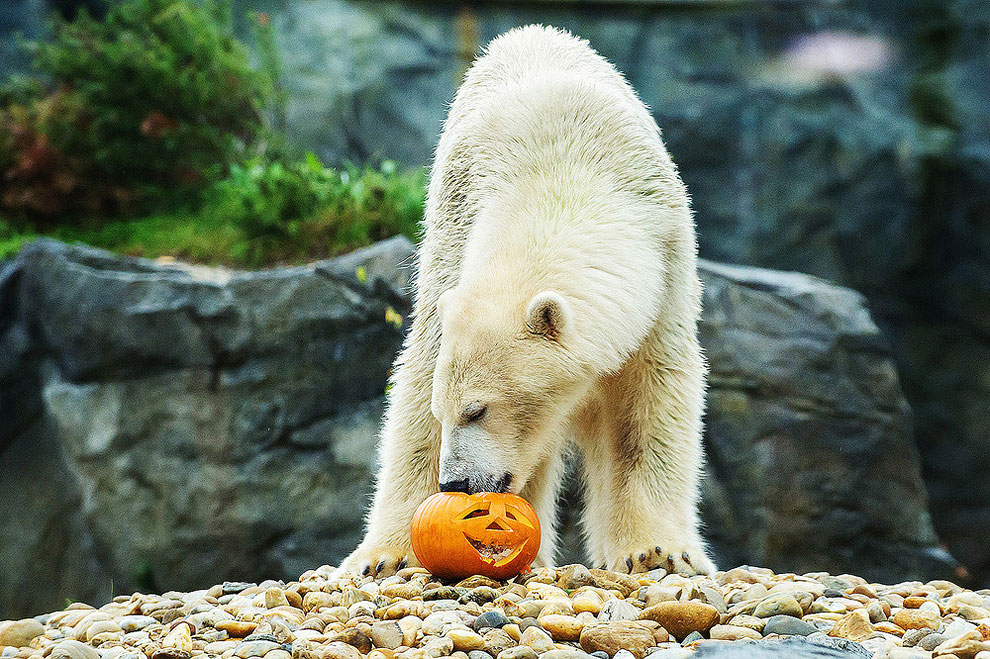 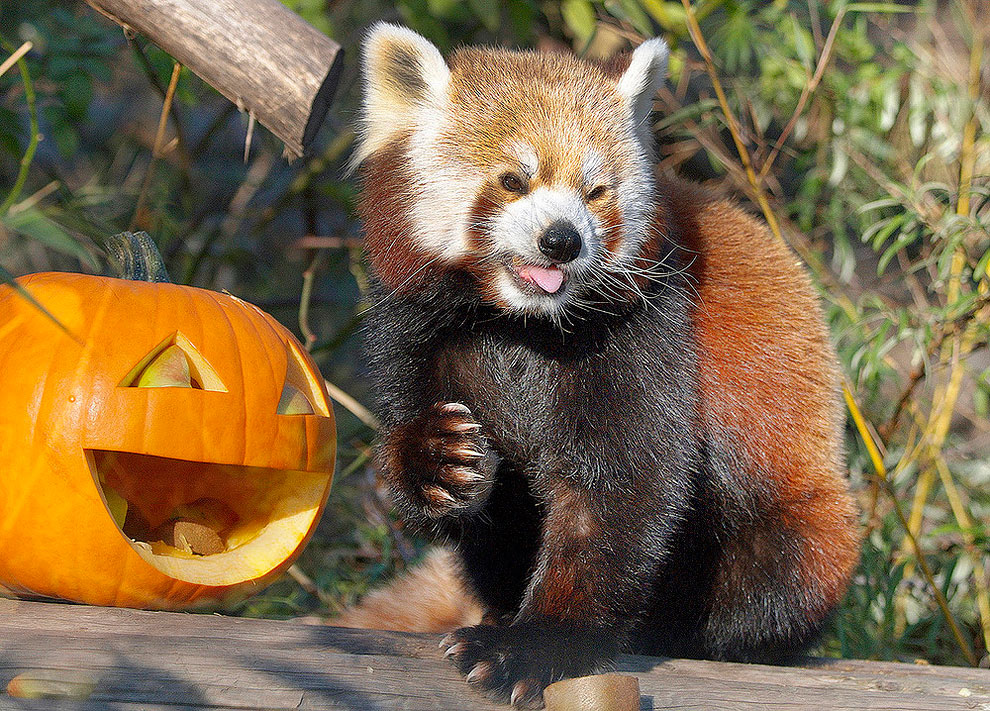 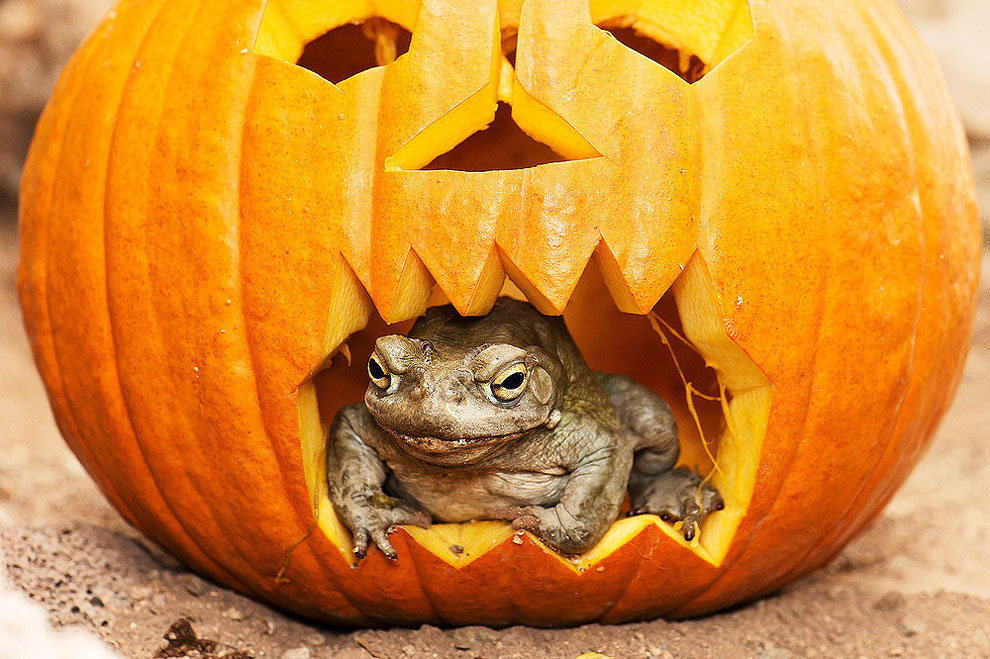 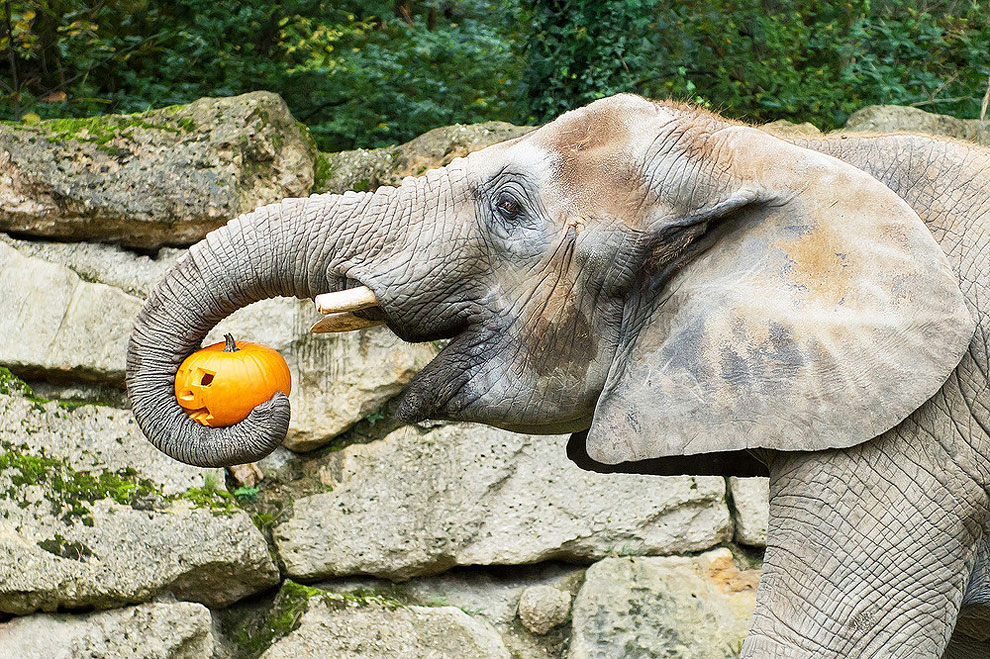 Elephants are lov for pumpkins. (Photo by Daniel Zupanc/EuroPics/Schönbrunn Zoo) 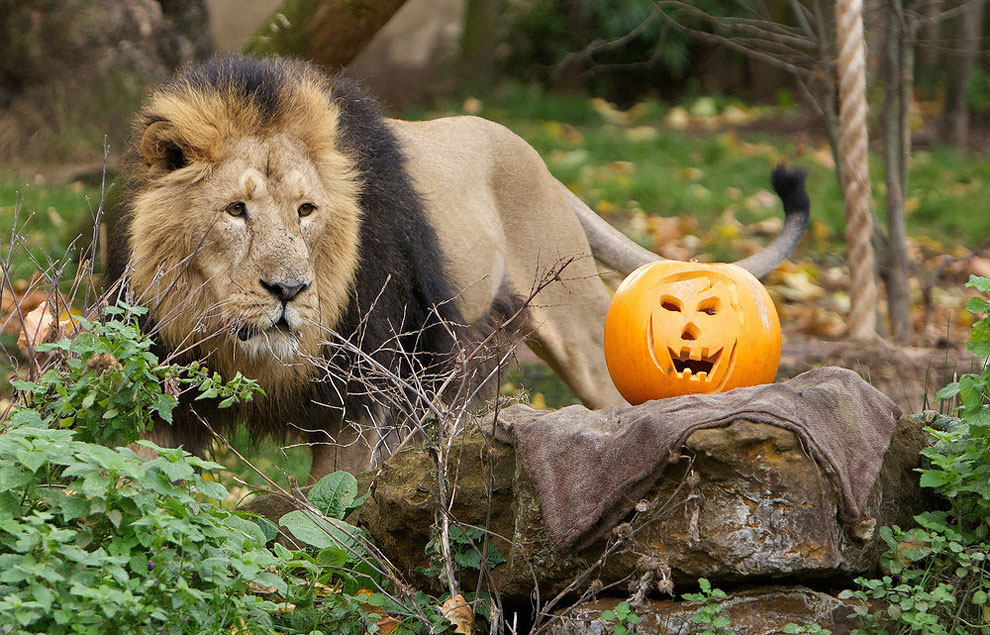 Lions get their teeth into some tasty treats this halloween with a breakfast of pumpkins at ZSL London Zoo, on October 24, 2014. London Zoo is celebrating “Boo at the Zoo” during the October half-term. (Photo by Johnathan Adam Davies/National News/ZUMAPress) 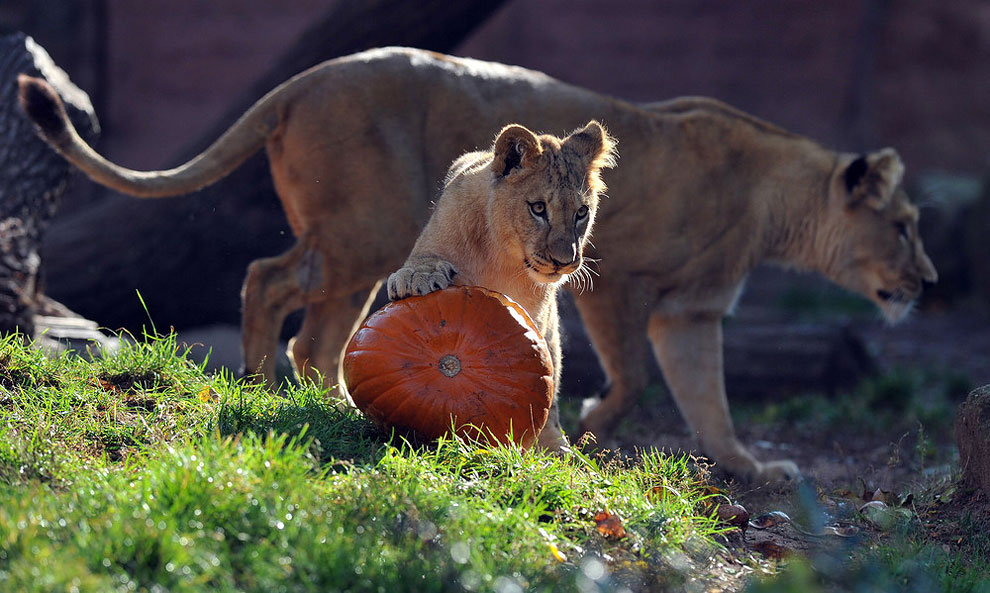 Barbary lion mother Binta sniffs a carved pumpkin with pieces of meat hidden in it with her cubs Zari and Joco (R) at the zoo in Hanover, Germany 27 October 2011. The animals at the zoo are being fed with unusual food to the visitors delight at Halloween time. (Photo by Jochen Lübke/DPA/ZUMAPress) 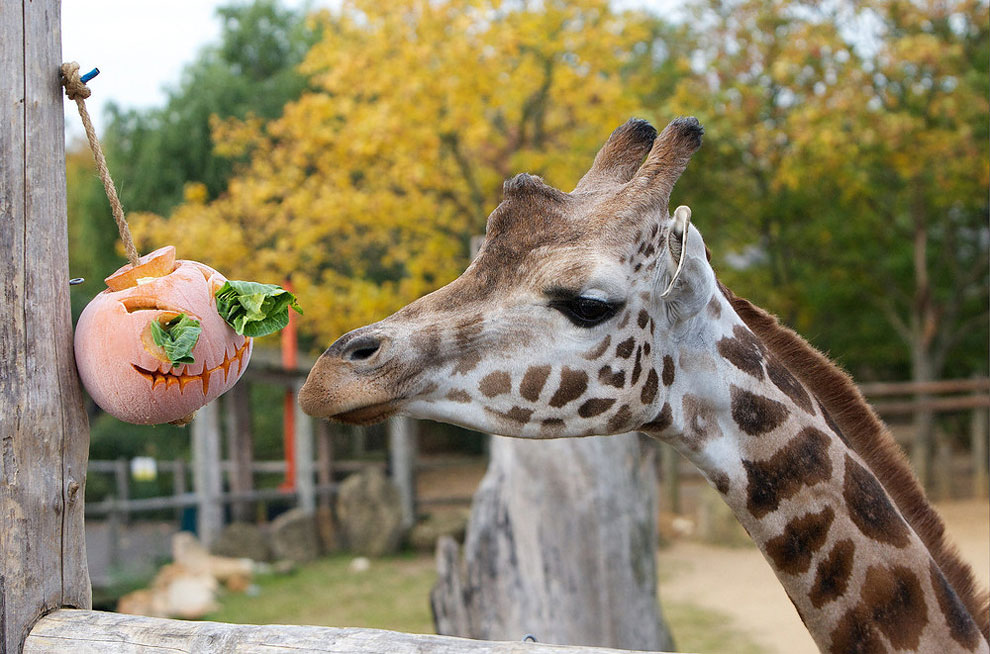 Giraffes get their teeth into some tasty treats this halloween with a breakfast of pumpkins at ZSL London Zoo, on October 24, 2014. London Zoo is celebrating “Boo at the Zoo” during the October half-term. (Photo by Johnathan Adam Davies/National News/ZUMAPress) 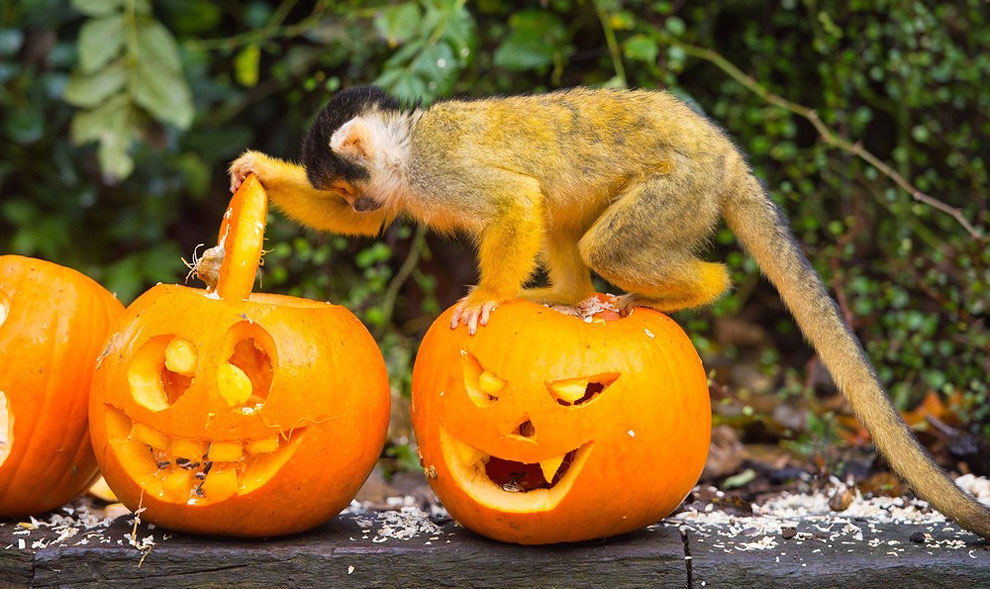 A squirrel monkey searches for Halloween treats hidden inside a pumpkin at ZSL London Zoo, in central London, on October 30, 2014. (Photo by Dominic Lipinski/PA Wire) 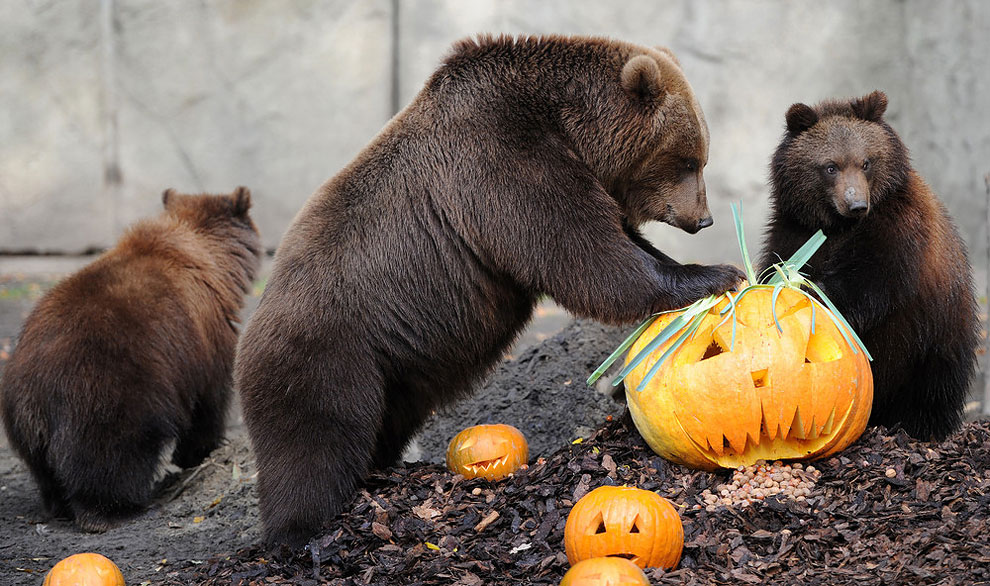 Bear “Mascha” (C) and her babies Misho (R) and Wanja (L) inspect pumpkins on October 28, 2011 at the Hagenbecks Tierpark zoo in Hamburg, northern Germany. Suited to the upcoming Halloween holiday, the animals’ enclosure is decorated with pumpkins and delights bears and visitors. (Photo by Daniel Bockwoldt/AFP Photo) 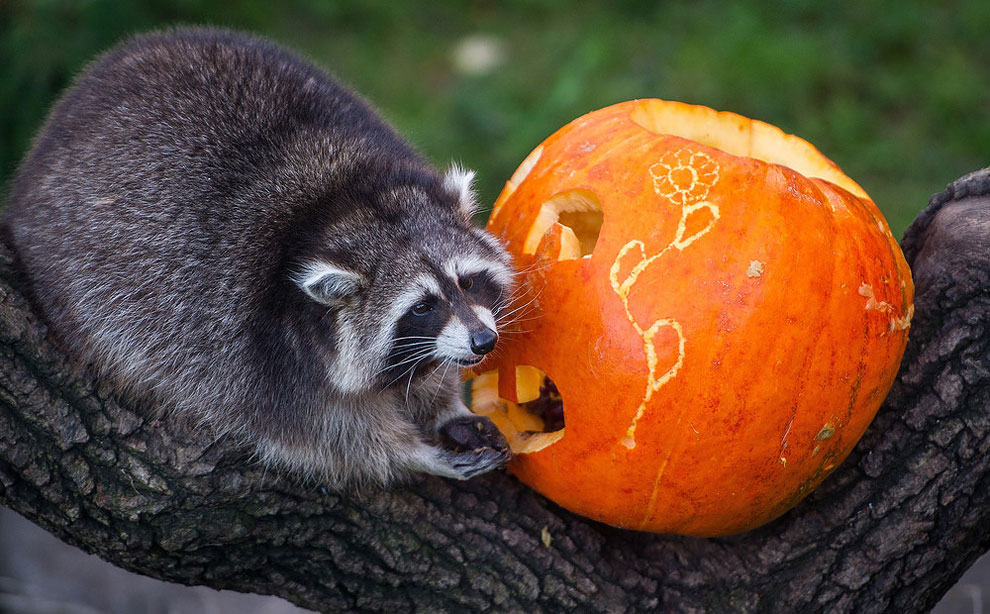 A raccoon inspects a carved pumpkin filled with food in its enclosure at the zoo in Hanover, central Germany, on October 23, 2014, some days before Halloween. (Photo by Ole Spata/AFP Photo/DPA) 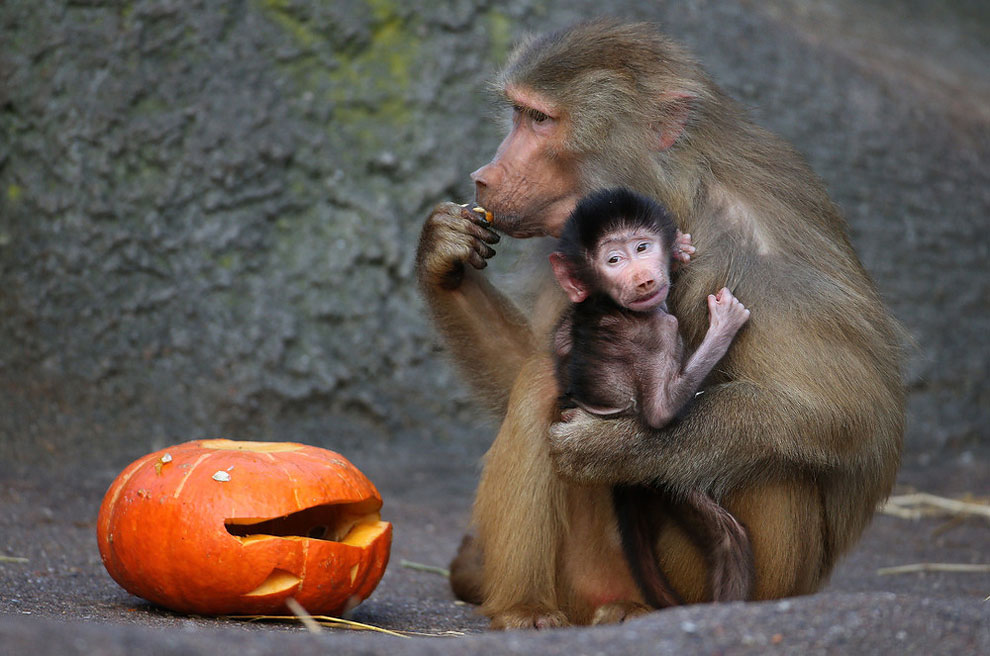 A baboon with a baby tastes a pumpkin in Halloween design on October 29, 2013 at the Hagenbeck zoo in Hamburg, northern Germany. (Photo by Christian Charisius/AFP Photo/DPA) 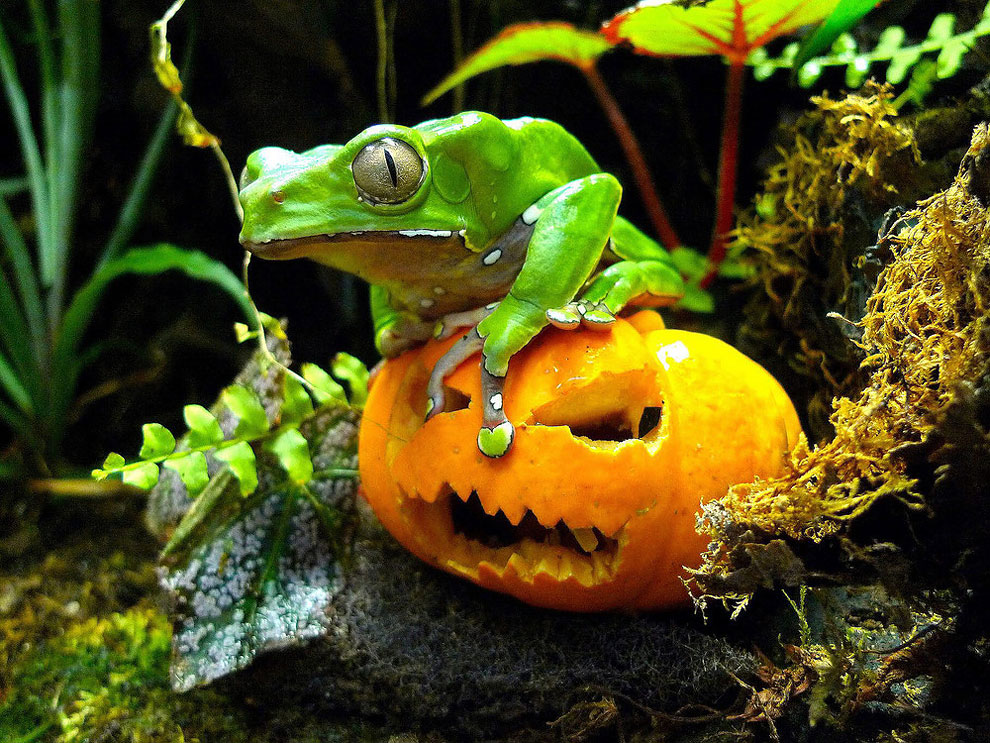 Alfred the frog looks almost as scary as the pumpkin he is perched on at London Zoo 26 October 2011. Keepers at the zoo have joined in the Halloween tradition by supplying pumpkin lunches to some of their animals, including the giant waxy monkey frog. However Alfred is not quite the giant figure his species name suggests – he actually measures up at around 4 inches (10 centimeters). (Photo by EPA/Zoological Society of London) 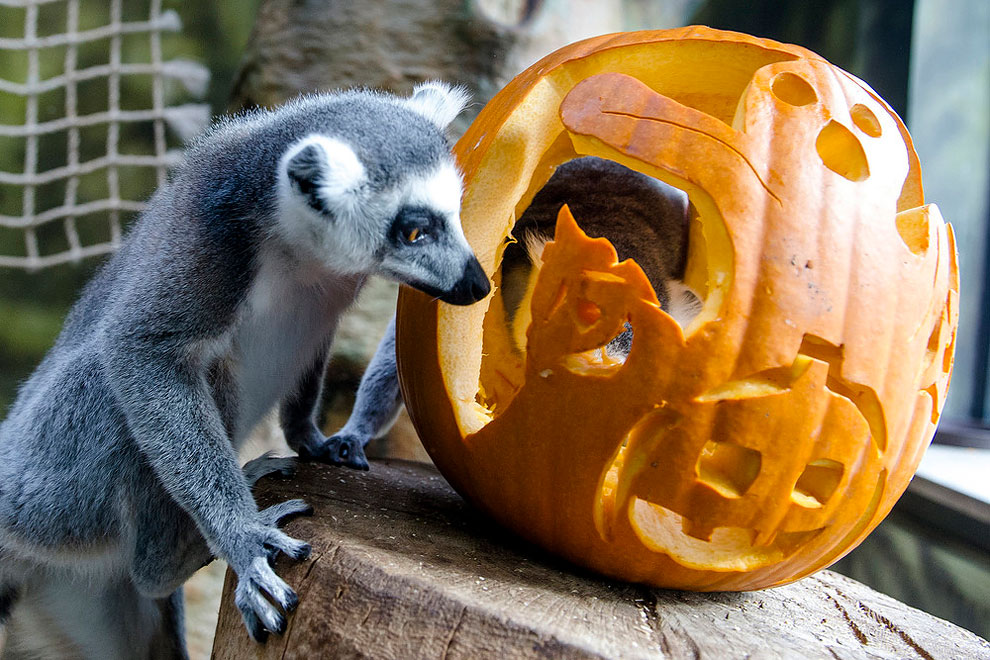 A lemur plays with pumpkin at the zoo, in Dvur Kralove nad Labem, 146 kilometers east of Prague, Czech Republic, Thursday, October 23, 2014. The zoo is decorated with the many pumpkin lanterns and other decorations in preparation for Halloween. (Photo by David Tanecek/AP Photo/CTK) 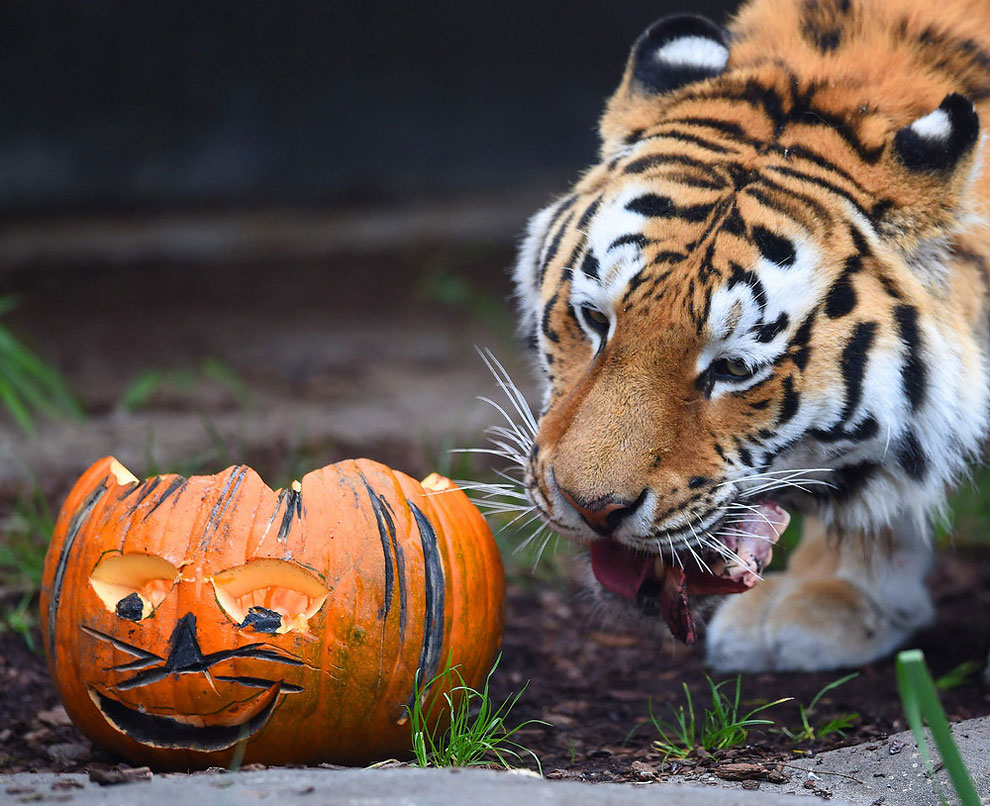 Tiger Lailek sniffs a meat-filled Jack-o’-lantern at Hagenbeck Zoo in Hamburg, Germany, 29 October 2014. Both tigers of the zoo received treats for Halloween. (Photo by Daniel Bockwoldt/EPA) 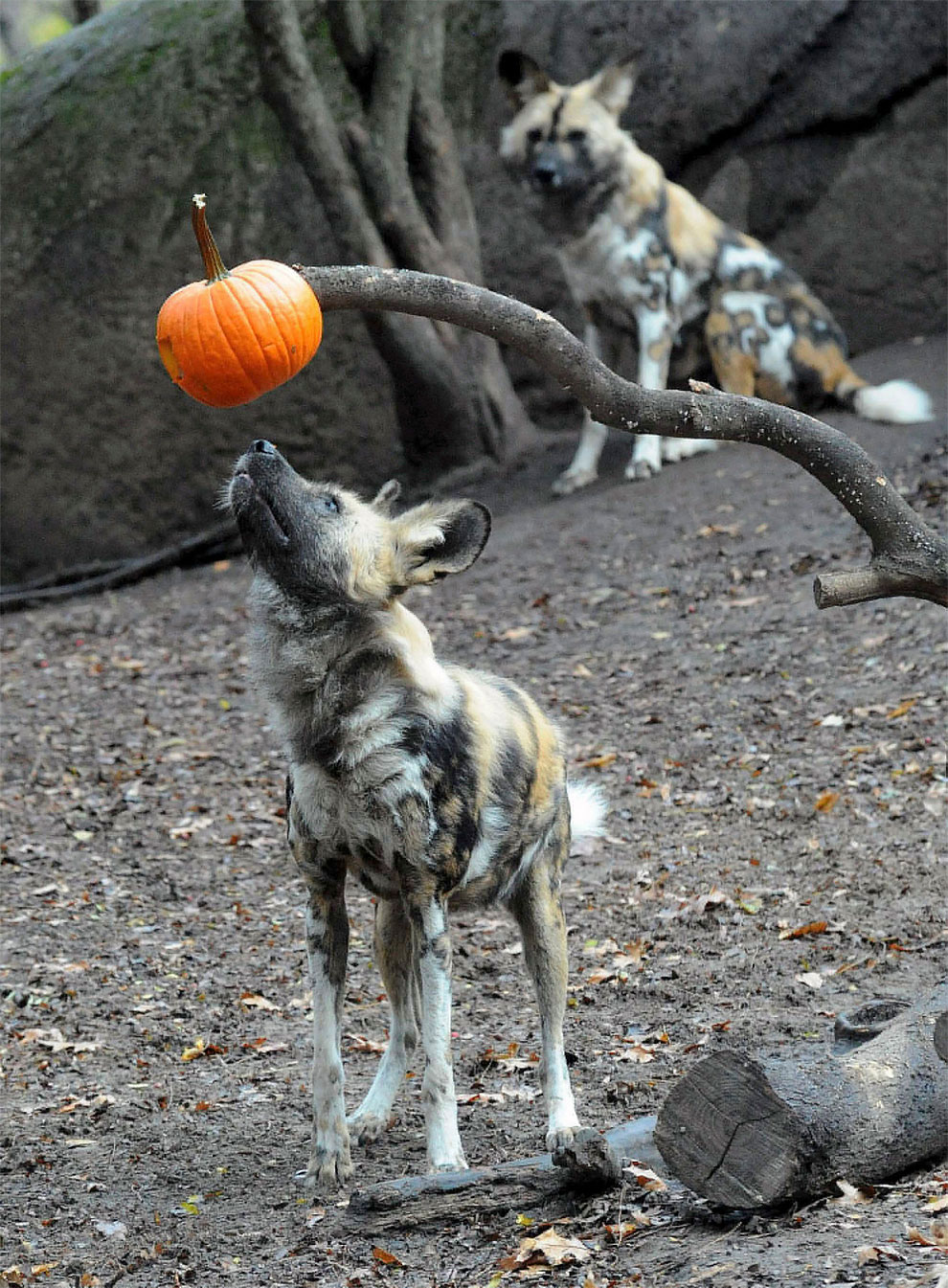 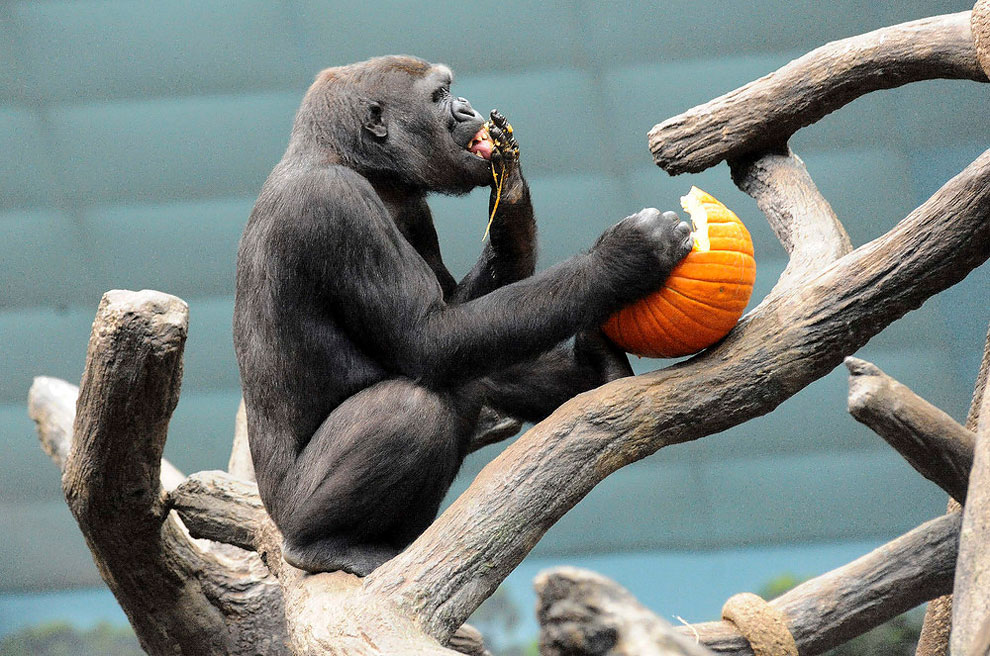 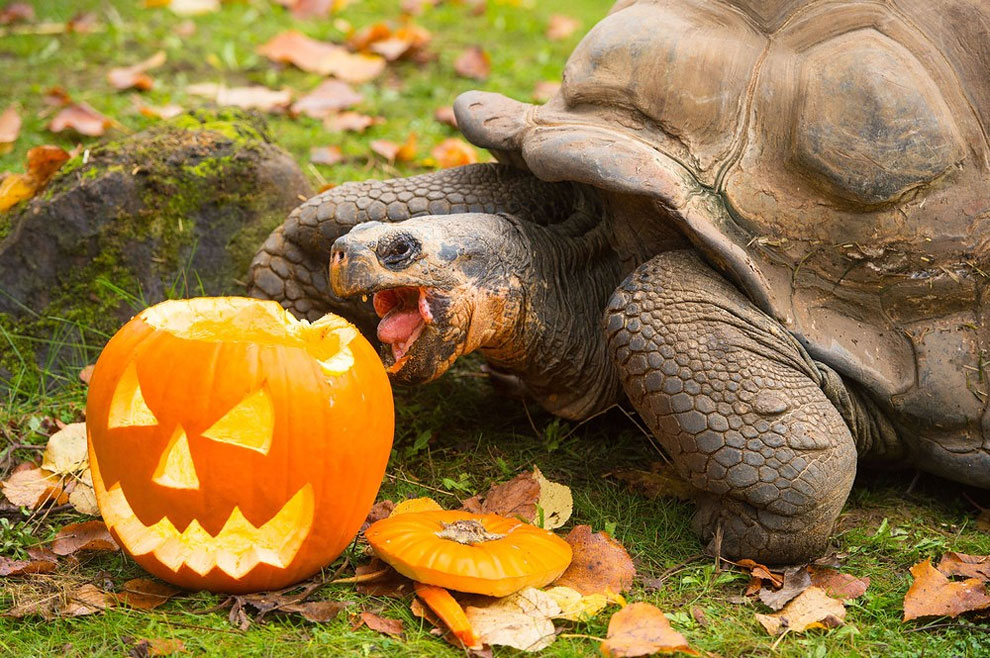 A Galapagos tortoise eats a carved pumpkin as a Halloween treat at ZSL London Zoo, in central London, on October 30, 2014. (Photo by Dominic Lipinski/PA Wire) 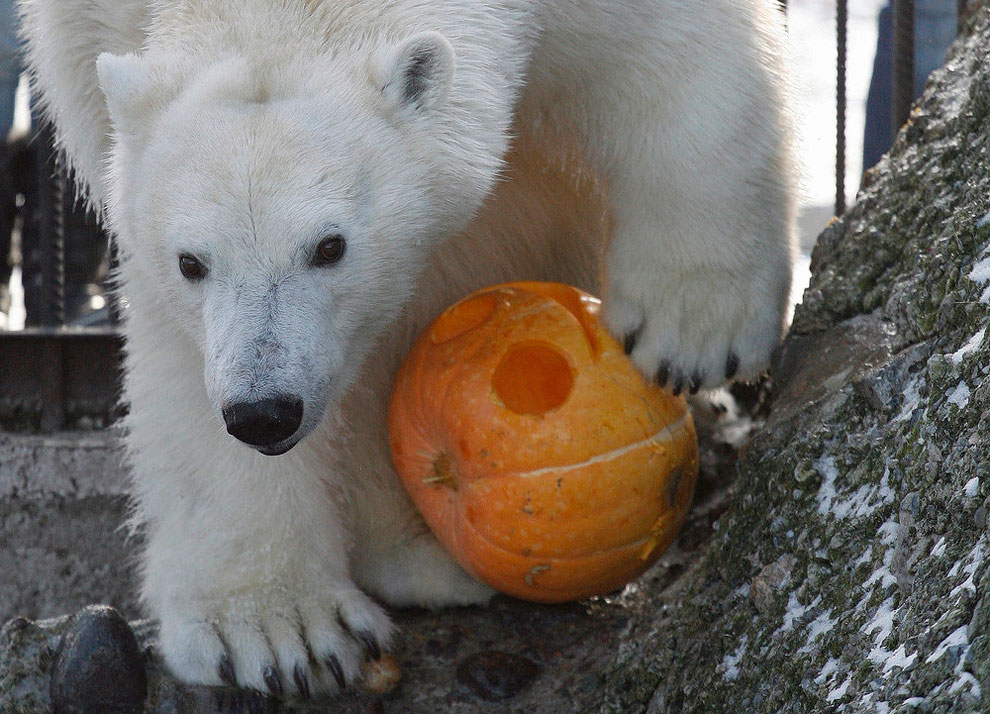 Aurora, a two-year-old female polar bear, plays with a pumpkin inside her open air cage during the Zoo Halloween Weekend event at the Royev Ruchey zoo in Russia’s Siberian city of Krasnoyarsk, October 26, 2012. Zoo employees held a competition for the best Halloween pumpkin, which were afterwards presented to the animals. (Photo by Ilya Naymushin/Reuters) 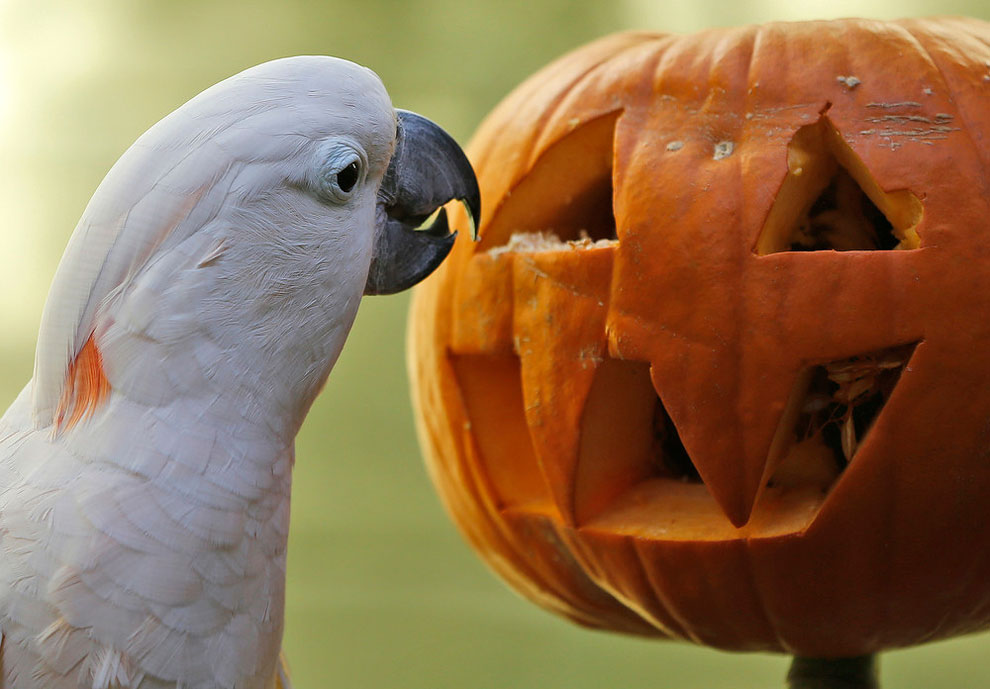 Moluccan cockatoo Zeppy looks for treats inside a pumpkin at the Oklahoma City Zoo in Oklahoma City, Friday, October 17, 2014. The Zoo was established in 1904 as a small menagerie at Wheeler Park. (Photo by Sue Ogrocki/AP Photo) 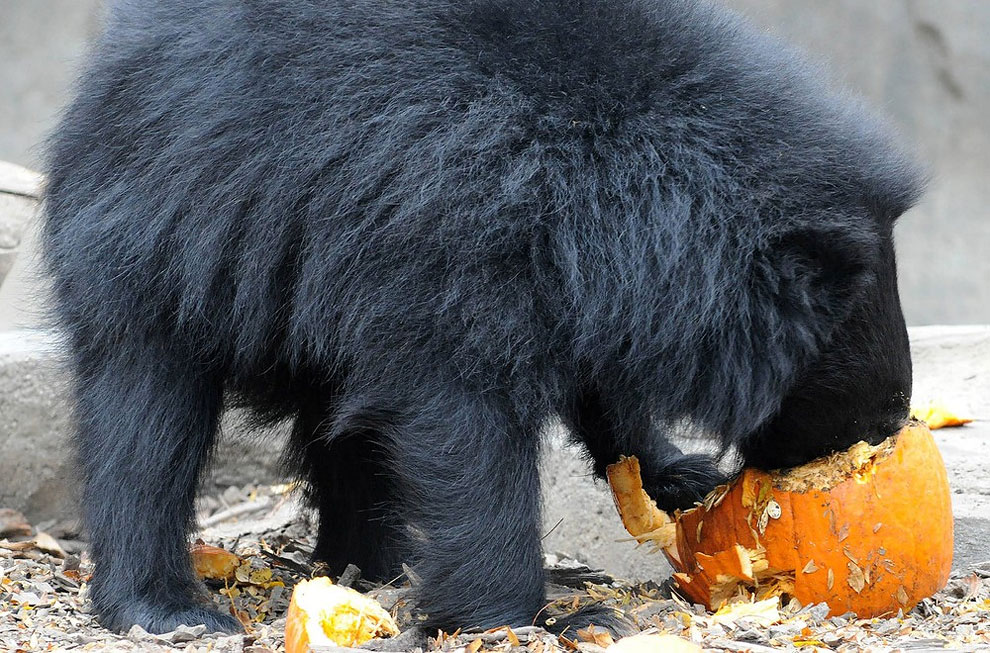 In this October 29, 2014, photo provided by the Chicago Zoological Society, Bhalu a 2-year old sloth bear enjoys a Halloween pumpkin treat at the Brookfield Zoo in Brookfield, Ill. The polar bears, grizzly bears, western lowland gorillas, sloth bears, and pygmy hippo seemed to thoroughly enjoy their treats. Some of the pumpkins were decorated with other goodies, including raisins and peanut butter. (Photo by Jim Schulz/AP Photo/Chicago Zoological Society)

A Tiger Temple in Thailand
Adorable Sand Kittens Make Debut at Israeli Safari Park
Kennel Club Dog Photographer Of The Year 2016
That Moment When Your Dog Has So Much Fur That You Can Practice Braiding With His Tail
See Inside This Cat Cafe In New York
Chinese Cats Saved From The Cooking Pot
Miniature Donkeys Are The Best Friend Anyone Ever Had
2020 Social Justice Kittens Calendar Is Here!
Fish Trapped Inside A Jellyfish Captured In A One In A Million Shot
Maternal Instinct: Lovable Pugs Raising Abandoned Tiger Cubs
Meet Jia Jia, The Oldest Giant Panda
There’s A ‘Sloth Institute’ Which Looks After Baby Sloths That Lost Their Moms
Living With Wolves
Annual Flamingo Count in Spain
Playful Photos of Polar Bears Frolicking in Flower Fields During Summer
How Animals Chill in Summer Heat
This Inspirational Girl Saved a Homeless Dog in the Most Ingenious Way
The London Zoo's Annual Stocktake of Animals
Heartwarming Photos Highlight Adventurous Bond Between Pups and Humans
Catipilla - A Cat Climbing Frame Designed For Cats
Adorable Baby Koala Poses for Her Very First Photoshoot
This Monkey Street in Bangkok is Full of... Street Monkeys, and They're Frisky!
Surfing With Dogs
The World's Most Super-Amazing 100% Awesome Catlendar
Russian Illustrator Reimagines Different Coffees As Cats
Wildlife On The Road: Amazing Photos Of Animals Crossing Roads
This Monastery Adopted A Stray Dog, Now He Enjoys His Life As A Monk
Two-Legged Rescue Puppy Gets 3D Printed Wheelchair To Walk
Adorable Dog Hilariously Photobombs Engagement Photo Shoot
Photographer Paul Octavious Captures Stunning Psychedelic Pup Portraits That Are Saving Animal Lives
animals, celebrate, halloween, pumpkins