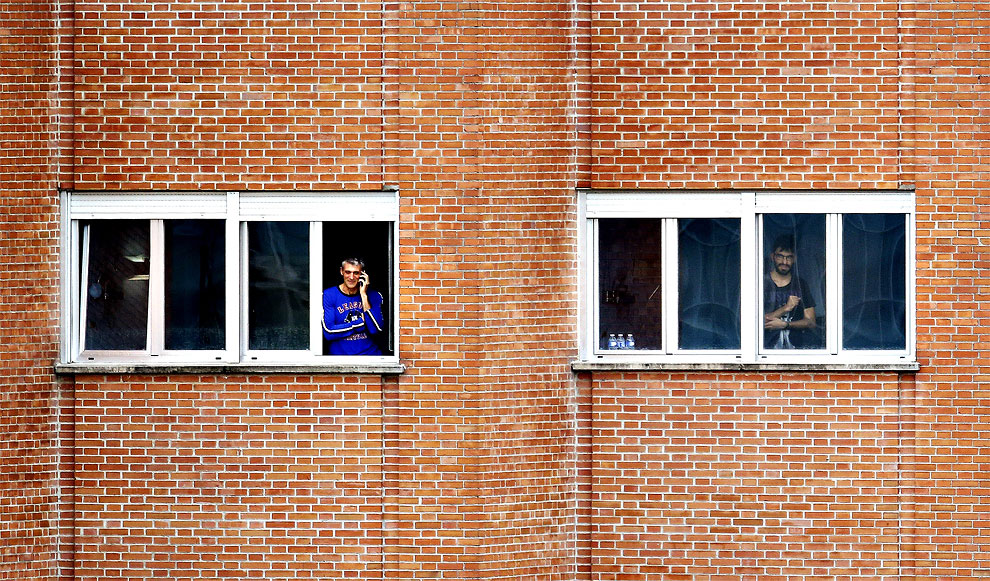 Juan Manuel Parra, a doctor who treated Spanish nurse Teresa Romero Ramos who contracted Ebola, looks out of an open window of the isolation ward as another person occupying an adjacent room looks on, at Madrid’s Carlos III hospital. (Andrea Comas/Reuters) 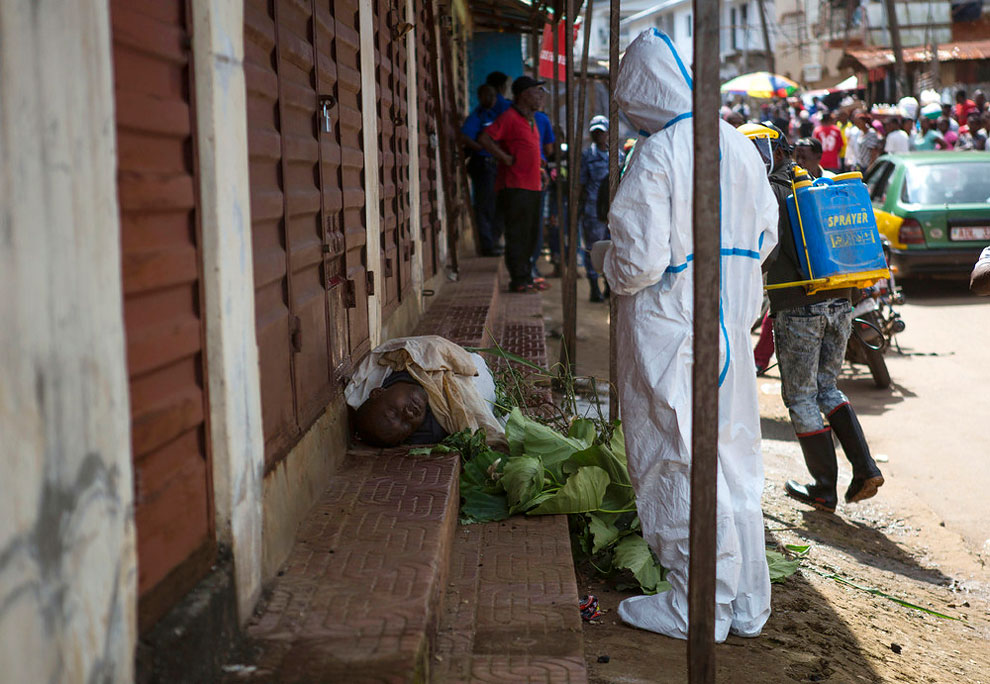 Heath workers collect samples from the body of a person suspected to have died from the Ebola virus, as it lies on the street covered in leaves in Freetown, Sierra Leone, Wednesday, October 8, 2014. Burial teams in Sierra Leone abandoned the bodies of Ebola victims in the capital after going on strike this week, though an official claimed Wednesday the situation had been resolved. (Photo by Tanya Bindra/AP Photo) 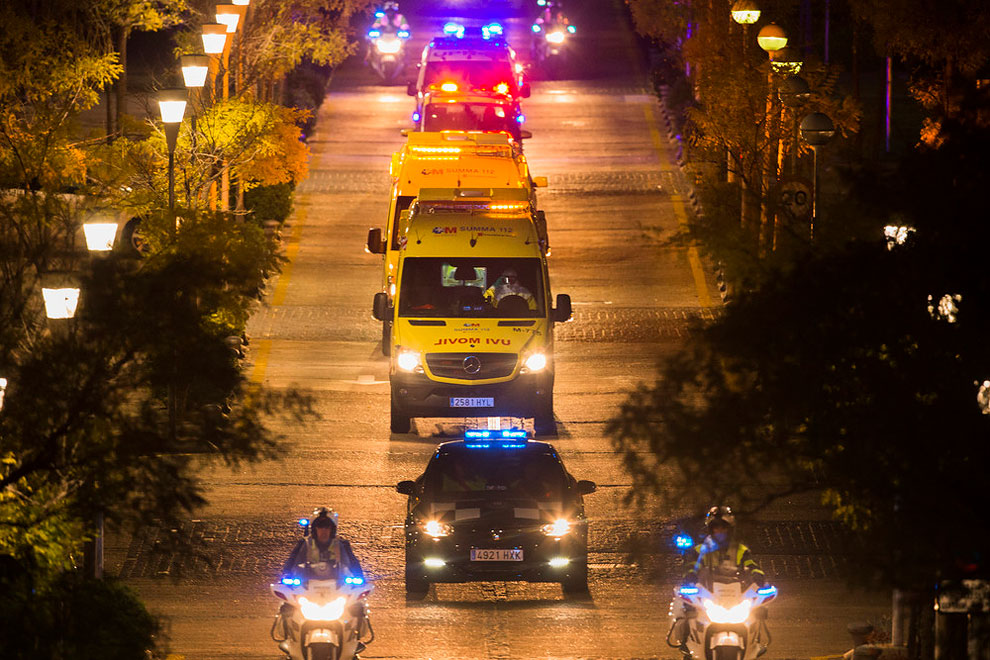 A convoy transporting a Spanish nurse who believed to have contracted the ebola virus from a 69-year-old Spanish priest leaves Alcorcon Hospital in Madrid, Spain, Tuesday, October 7, 2014. The nurse who treated a missionary for the disease at a Madrid hospital tested positive for the virus, Spain’s health minister said Monday. The female nurse was part of the medical team that treated the Spanish priest who died in a hospital last month after being flown back from Sierra Leone, where he was posted. (Photo by Andres Kudacki/AP Photo) 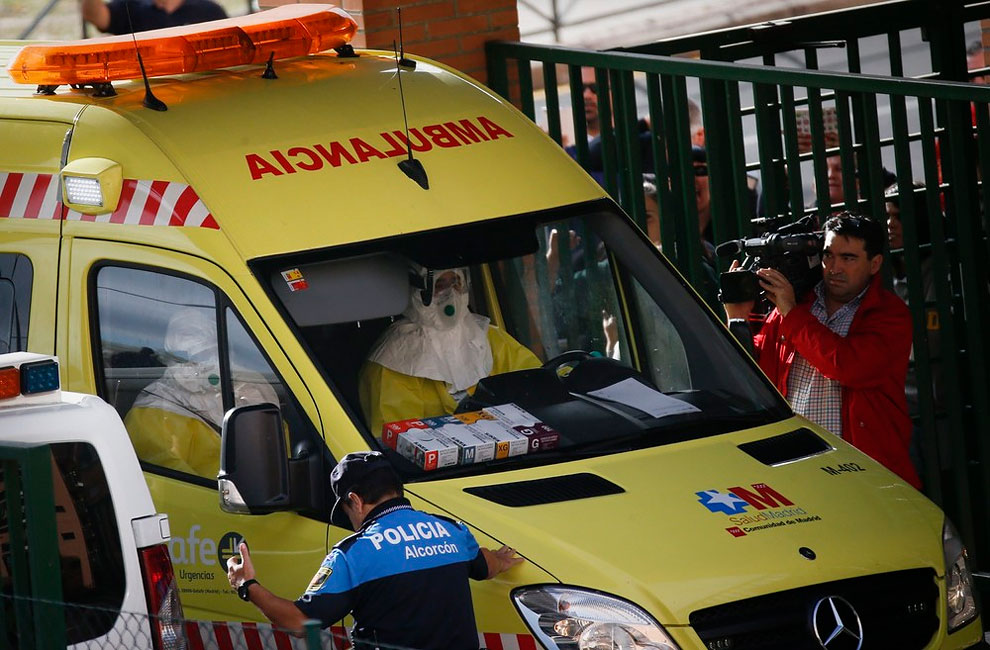 An ambulance crew drives through the entrance of the apartment building of the nurse who contracted Ebola, in Alcorcon, outside Madrid, October 8, 2014. Spanish health authorities said on Wednesday that another person being monitored in Madrid for Ebola had tested negative for the disease. The man, a Spaniard who had travelled from Nigeria, was one of several people hospitalised after authorities confirmed on Monday that a Spanish nurse had caught the disease in Madrid. (Photo by Susana Vera/Reuters) 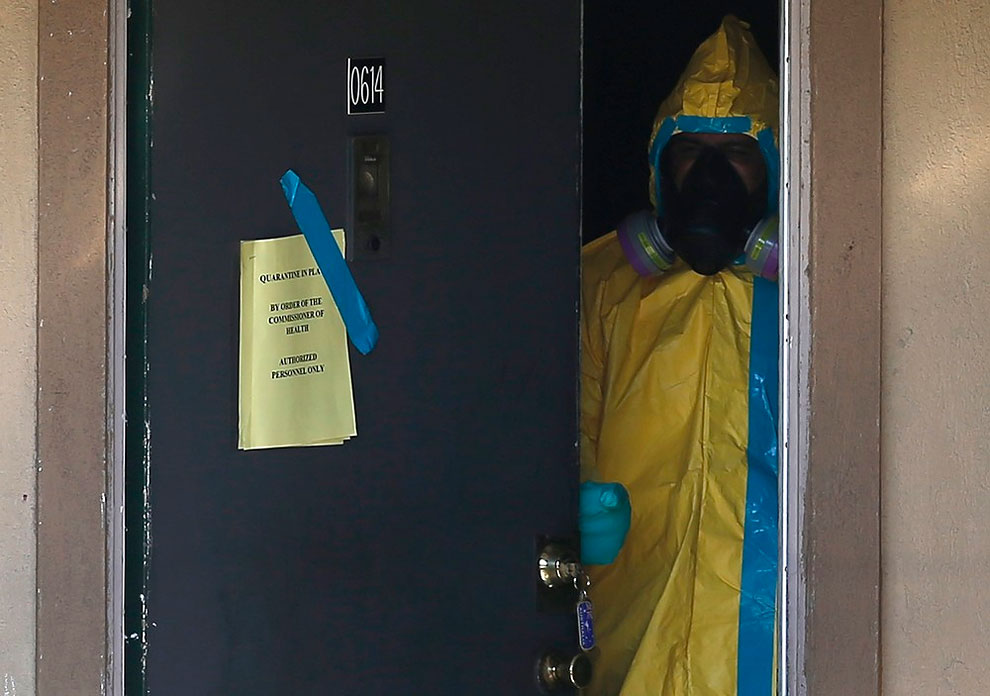 A worker in a hazardous material suit looks out from the apartment unit where a man diagnosed with the Ebola virus was staying in Dallas, Texas, October 5, 2014. Thomas Eric Duncan, the first person diagnosed with Ebola in the United States, was fighting for his life at a Dallas hospital on Sunday and appeared not to be receiving any of the experimental medicines for the virus, a top U.S. medical official said. (Photo by Jim Young/Reuters) 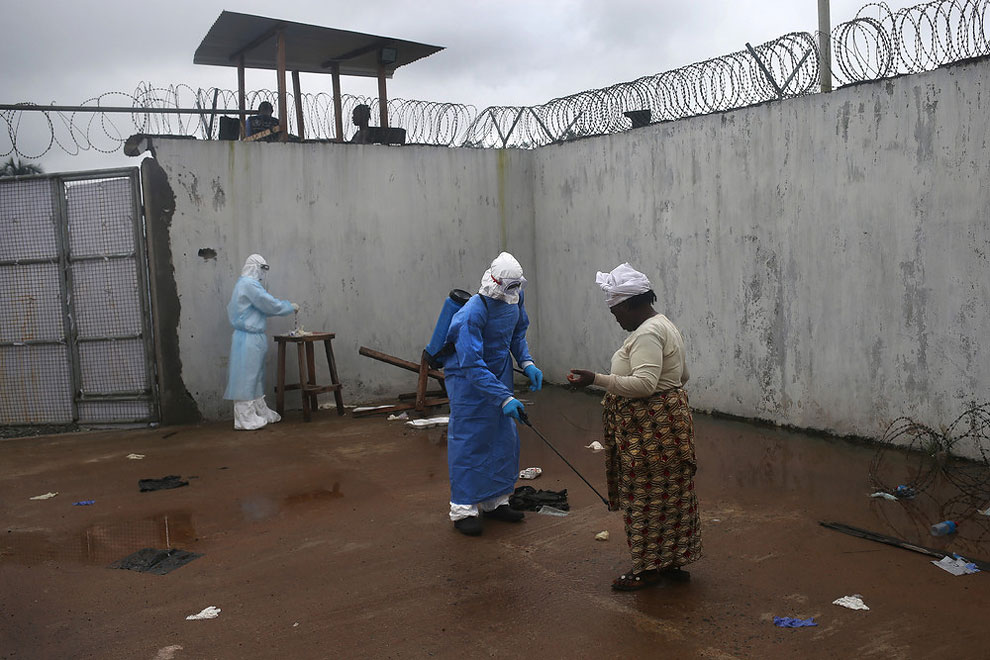 A family member is disinfected after bringing a sick relative to the Ebola treatment center at the Island Hospital on October 6, 2014 on the outskirts of Monrovia, Liberia. The hospital, with it’s 120 beds, has remained at capacity since it’s opening by the Liberian Ministry of Health and the World Health Organization (WHO), in September. The Ebola outbreak has killed more than 3,400 people in West Africa, according to the WHO. (Photo by John Moore/Getty Images) 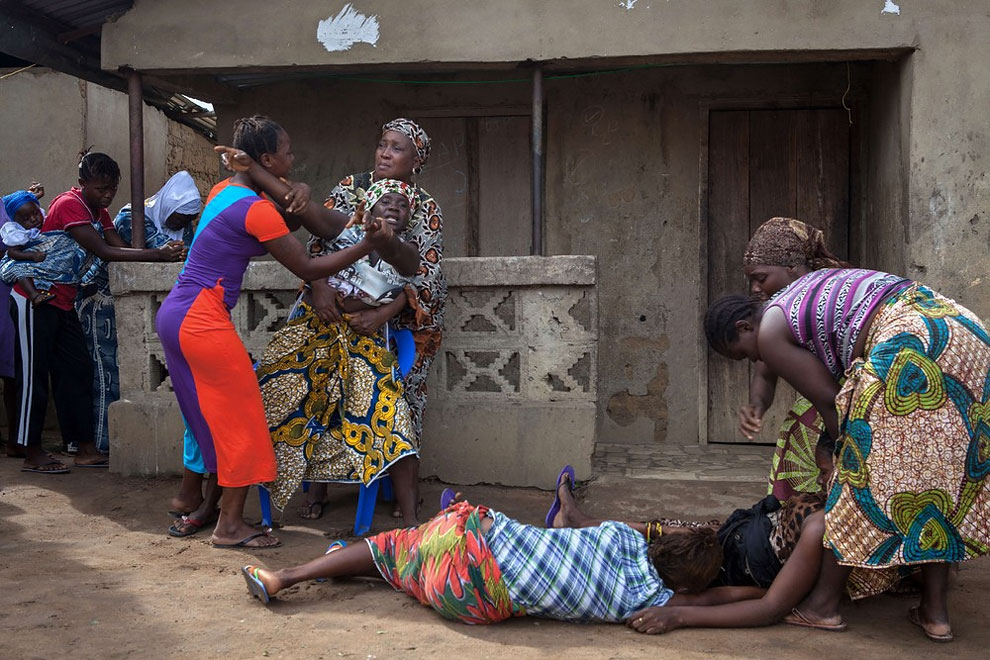 Women faint (Bottom) as another reacts while volunteers (unseen) take away from a nearby house the body of a woman who died of Ebola, in Waterloo, some 30 kilometers southeast of Freetown, on October 7, 2014. Dozens of British military personnel are due to fly to Sierra Leone next week to help build medical facilities to combat the Ebola epidemic, the defence ministry said on October 7. (Photo by Florian Plaucheur/AFP Photo) 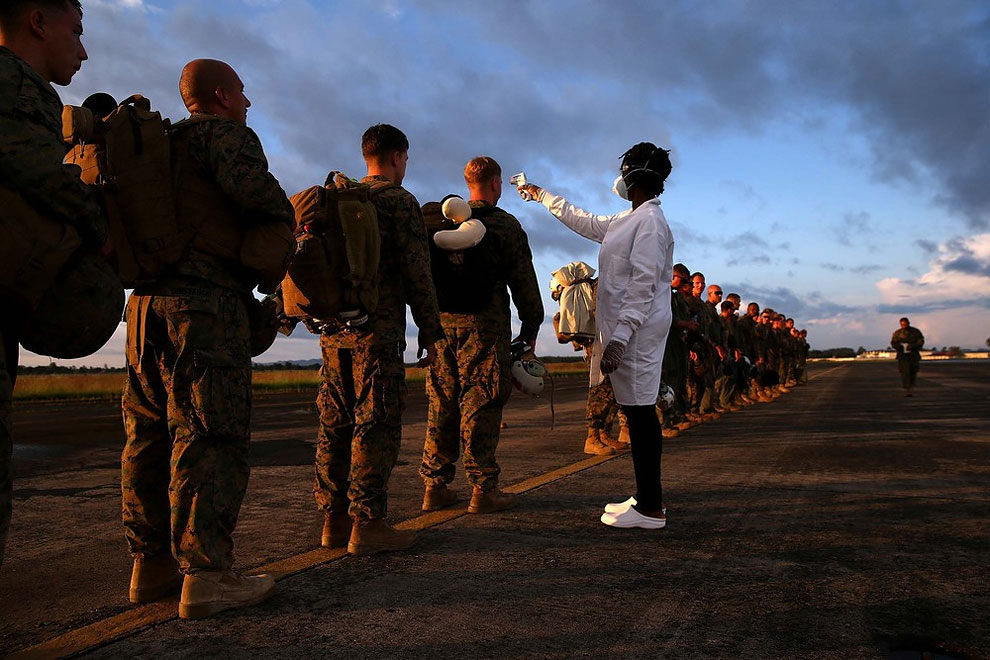 A health worker takes the temperature of U.S. Marines arriving to take part in Operation United Assistance, near Monrovia, Liberia, on October 9, 2014. The troops will build 17 Ebola treatment centers around Liberia. President Barack Obama has committed up to 4,000 troops in West Africa to combat the disease. (Photo by John Moore/Getty Images) 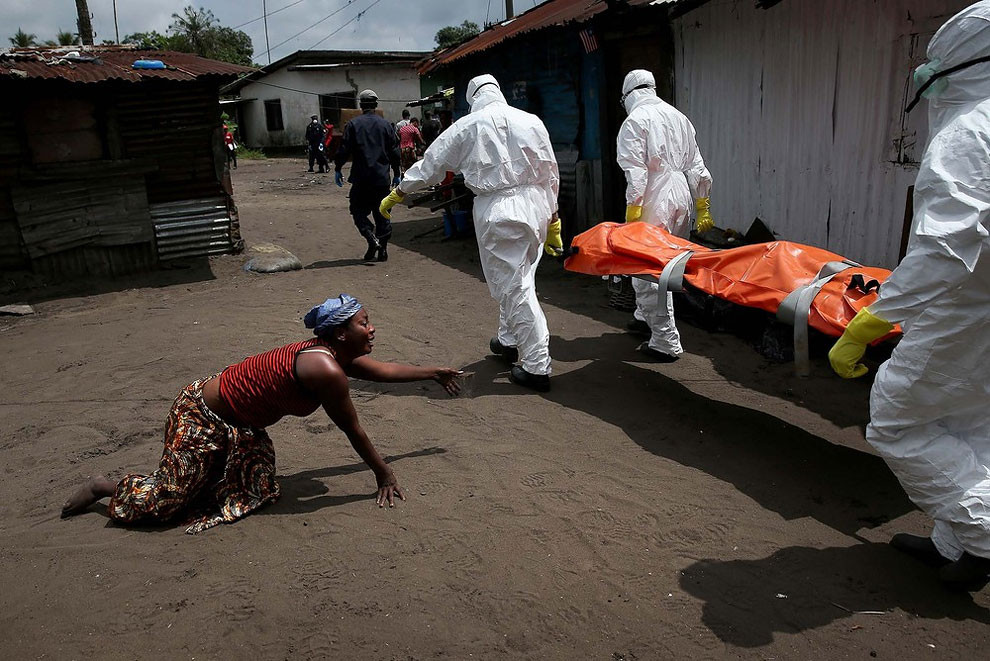 A woman crawls towards the body of her sister as Ebola burial team members take Mekie Nagbe, 28, for cremation, in Monrovia, Liberia, on October 10, 2014. Nagbe, a market vendor, collapsed and died outside her home earlier in the morning while leaving to walk to a treatment center. The burial of loved ones is important in Liberian culture, making the removal of infected bodies for cremation all the more traumatic for surviving family members. (Photo by John Moore/Getty Images) 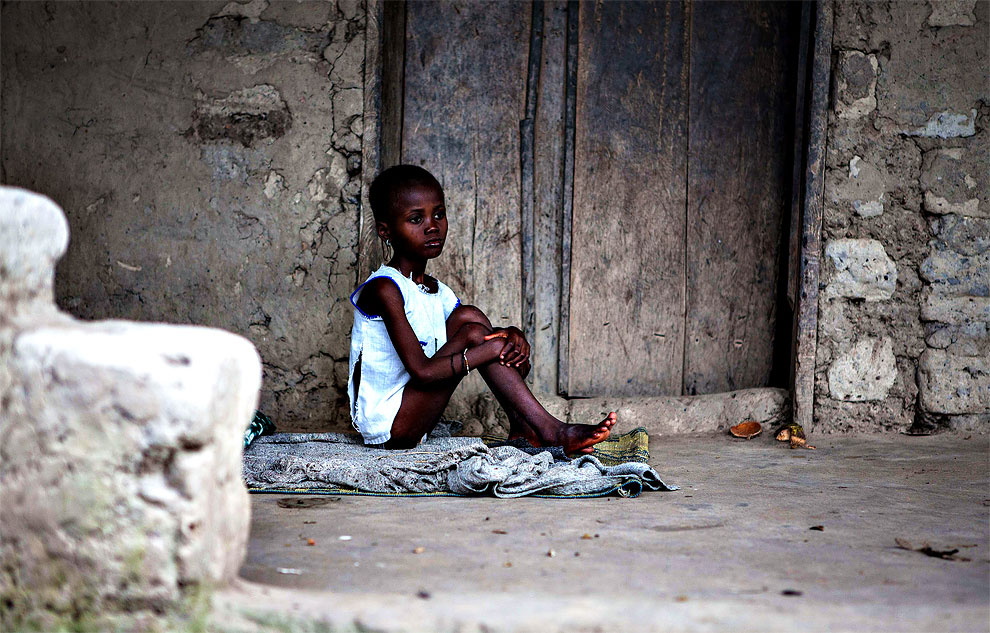 A young girl waits at a hospital in Foredugu, where patients suffering from Ebola are being treated. Ebola may only be present in a few African nations, but fears over the crippling outbreak are infecting economies across the continent. (Florian Plaucheur/AFP)