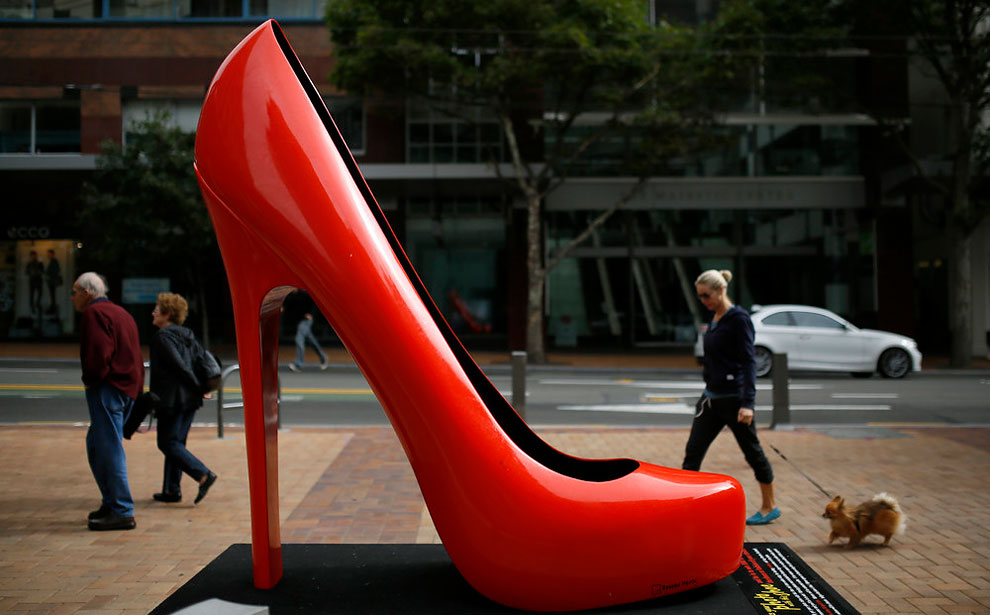 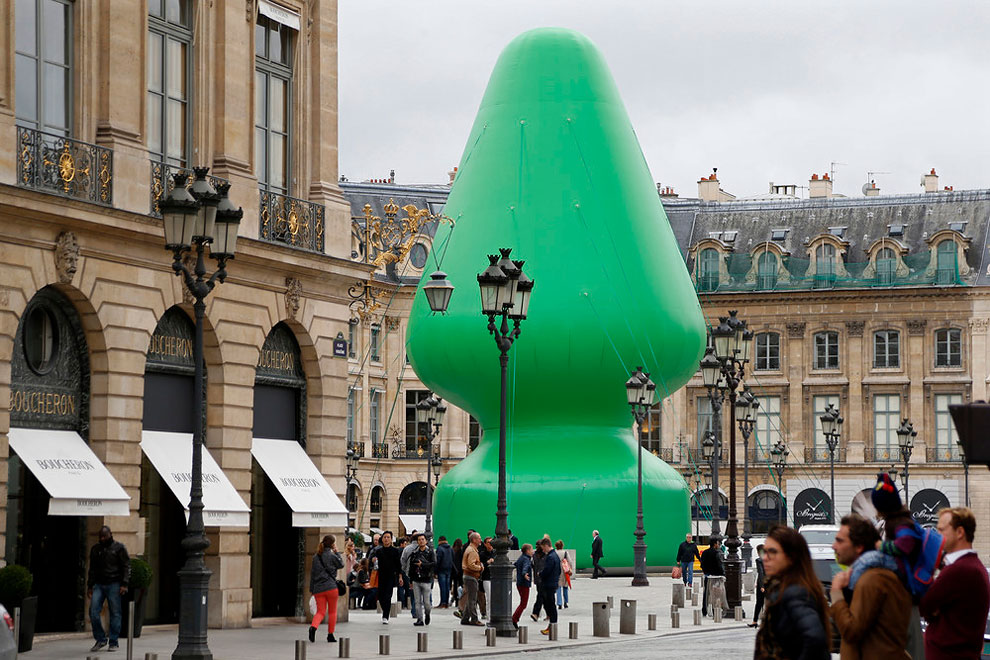 People walk near Paul McCarthy’s “Tree” creation which is displayed on the Place Vendome in Paris October 16, 2014. (Photo by Charles Platiau/Reuters) 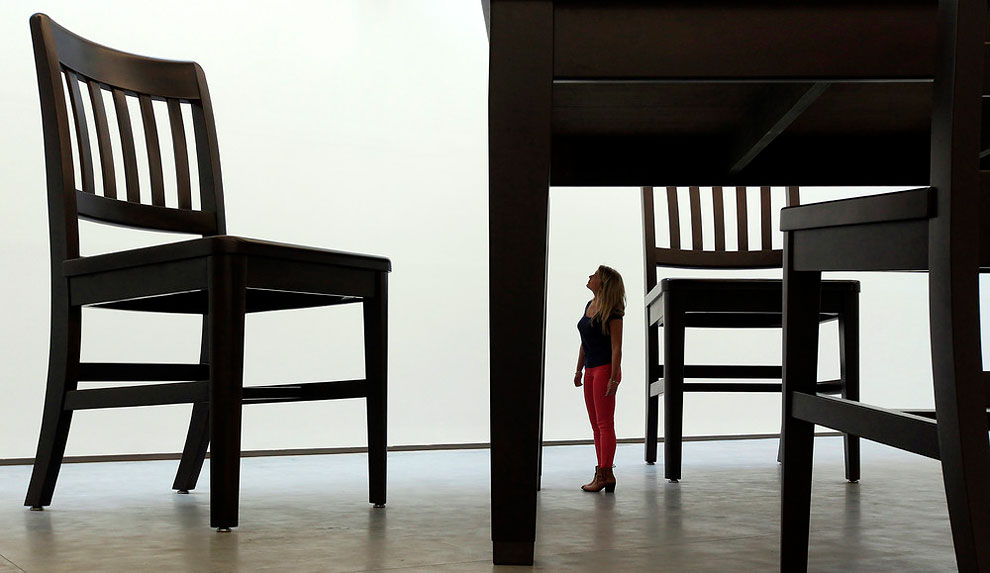 A visitor looks at a monumental sculpture by artist Robert Therrien in the Metropolitan Arts Centre in Belfast April 23, 2012. (Photo by Cathal McNaughton/Reuters) 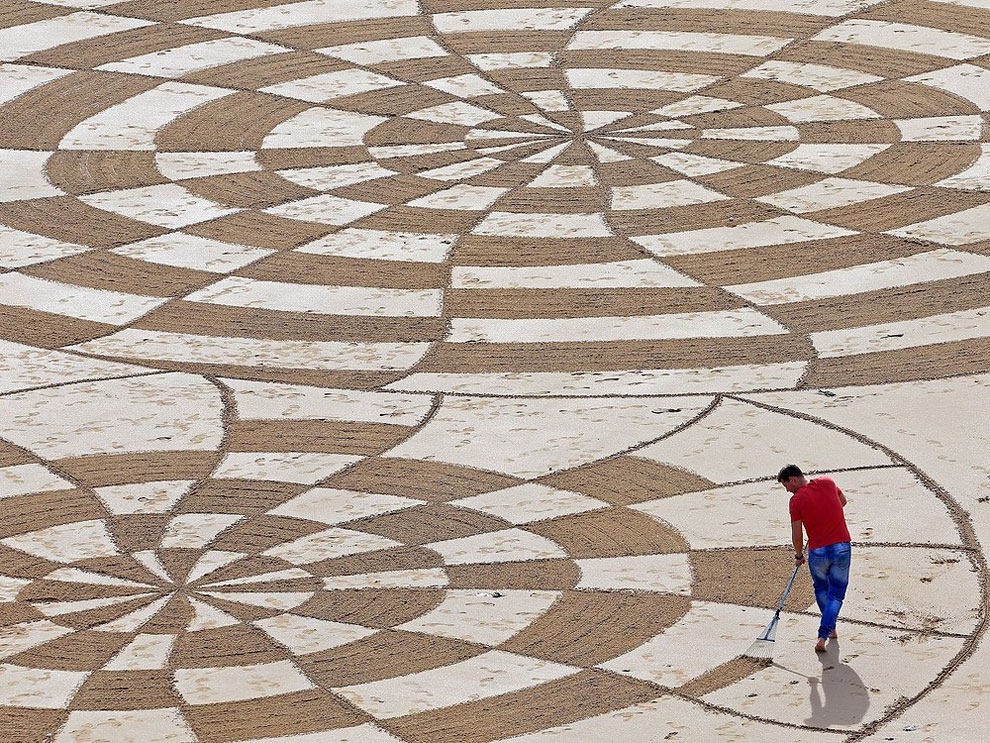 Sand artist Ross Andrews at work on a piece entitled “Legacy No.II” on Ramsgate beach in Kent, Andrews who grew up in Kent, uses the coast of Thanet as his canvas for artworks produced in about four hours in a race against the tides, he uses a rake and a stick to create his freestyle designs, which he says he does not plan before he starts. (Photo by Gareth Fuller/PA Wire) 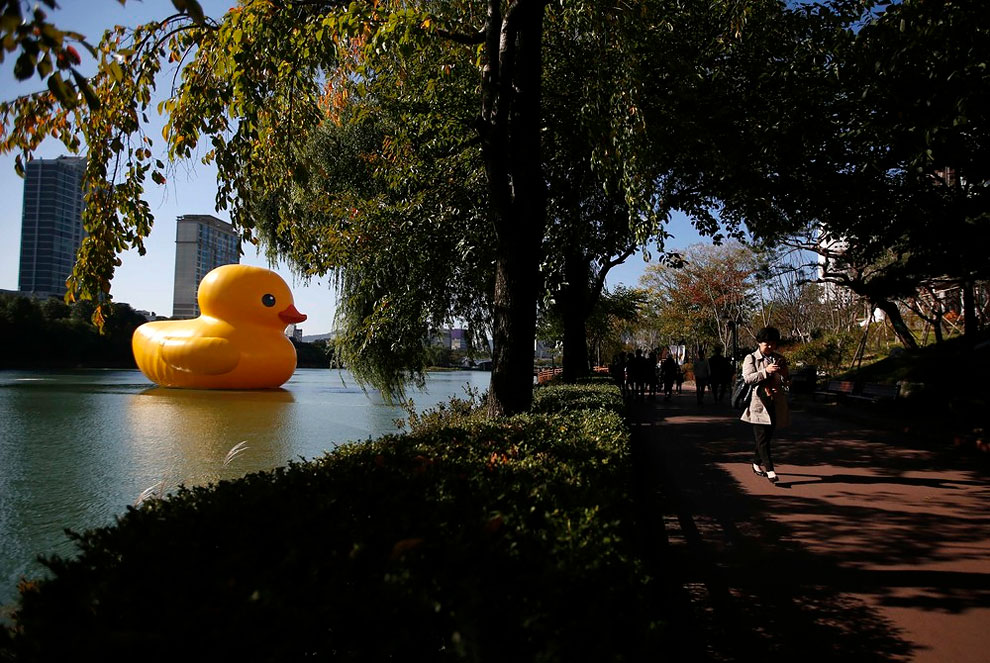 A woman takes a walk as the giant inflatable Rubber Duck installation by Dutch artist Florentijn Hofman floats in Seokchon Lake as part of promotional events for the Lotte World Tower in Seoul October 14, 2014. (Photo by Kim Hong-Ji/Reuters) 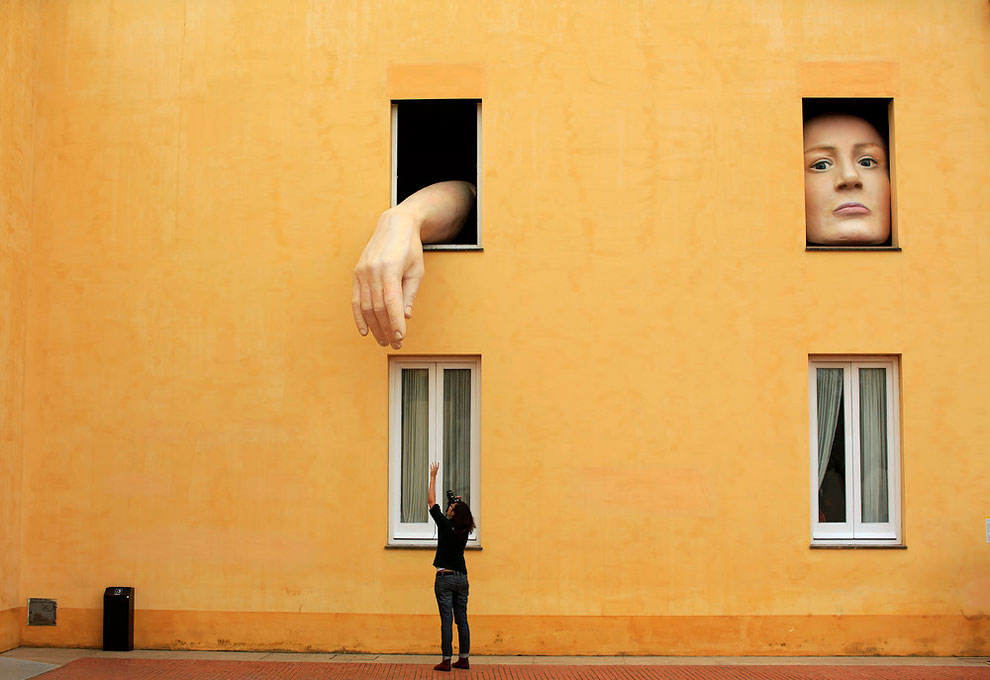 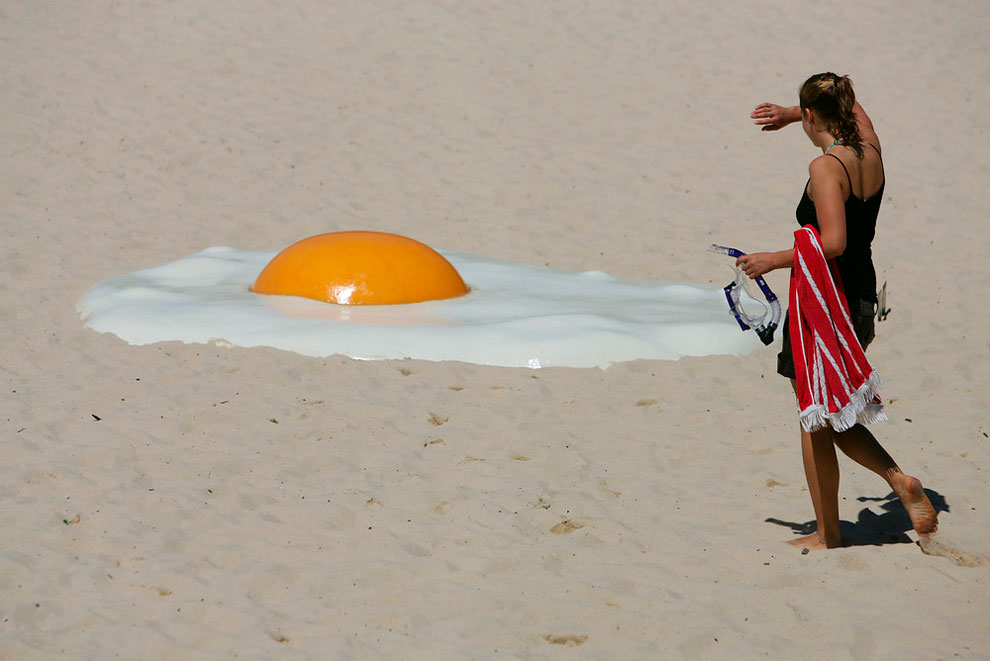 A woman approaches an artwork called “Big Chook”, made of fibreglass and high gloss epoxy marine paint, by Australian artist Jeremy Parnell on Tamarama Beach in Sydney November 2, 2005. (Photo by Will Burgess/Reuters) 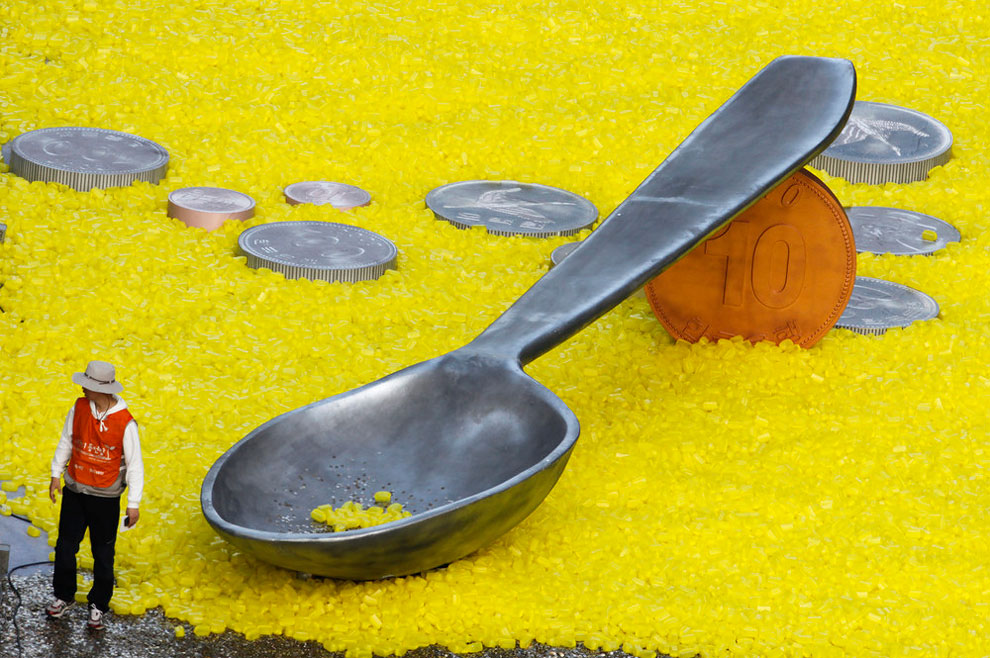 A volunteer stands besides a giant spoon and coin replicas during a charity event by World Vision in central Seoul May 1, 2010. (Photo by Jo Yong-Hak/Reuters) 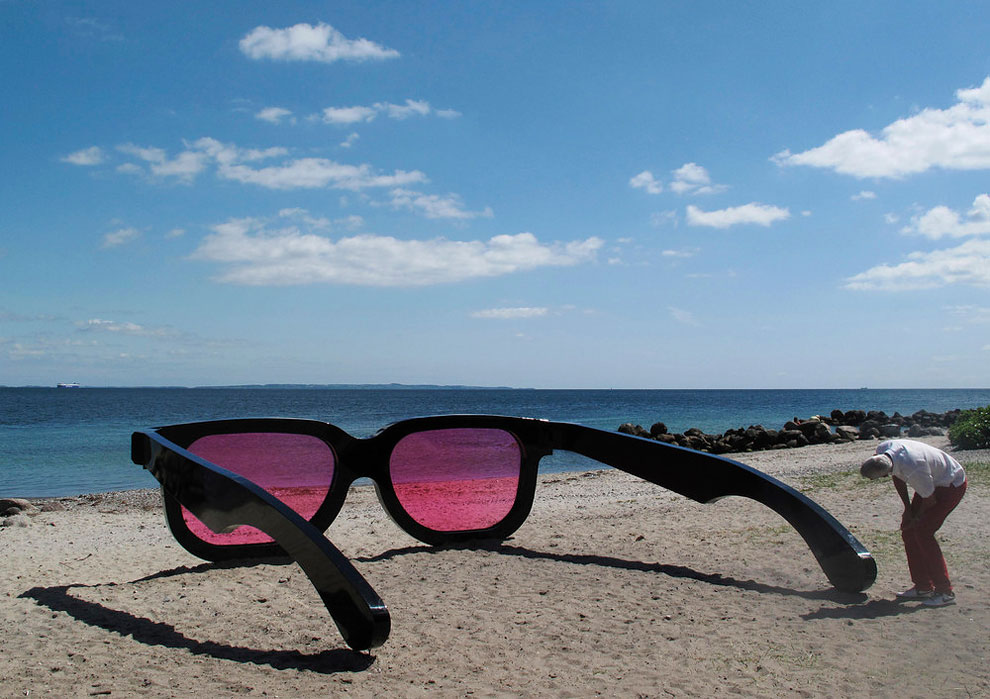 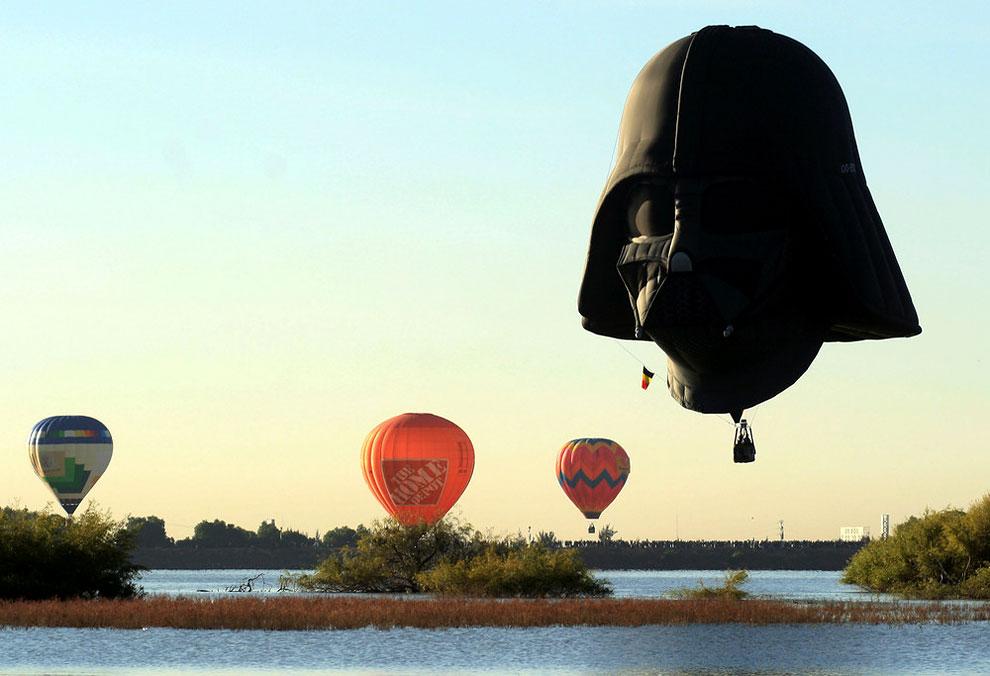 A hot air balloon in the shape of Darth Vader flies with others during the Hot Air Balloons Festival in Leon, Mexico, November 16, 2009. (Photo by Mario Armas/Reuters) 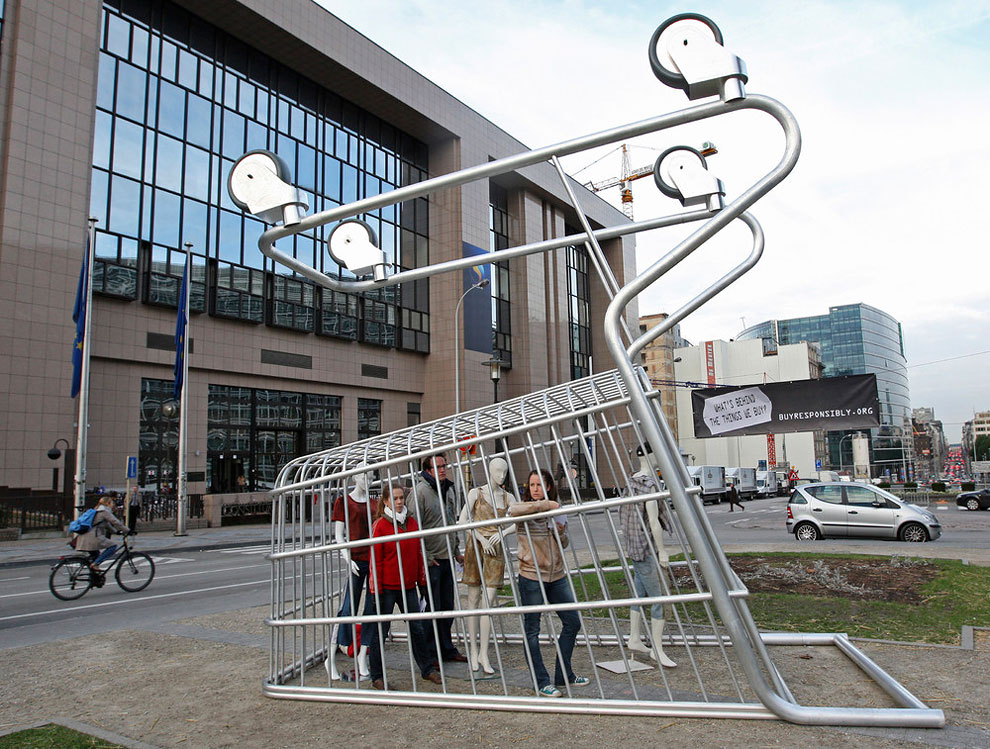 Workers are trapped under an upside-down shopping trolley placed outside the European Union headquarters in Brussels October 19, 2009 as part of an ad campaign to raise awareness about modern slave labor. (Photo by Thierry Roge/Reuters) 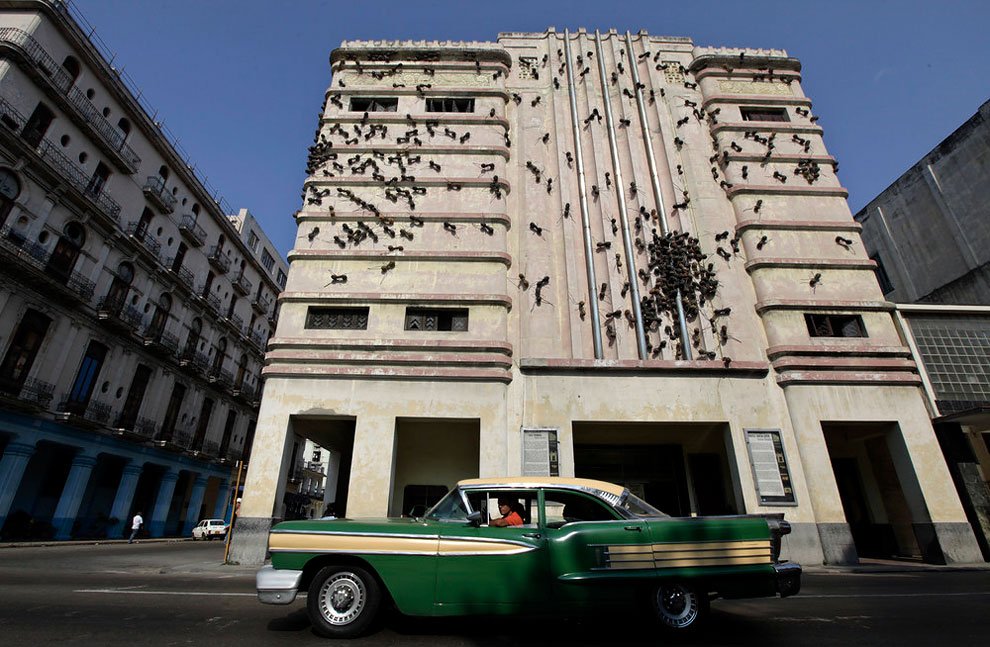 Giant ants appear to crawl up and down the facade of the Fausto Theater, in a sculpture created by Colombian artist Rafael Gomez Barros, during an exhibition for the Havana Biennal in Cuba May 11, 2012. (Photo by Enrique De La Osa/Reuters) 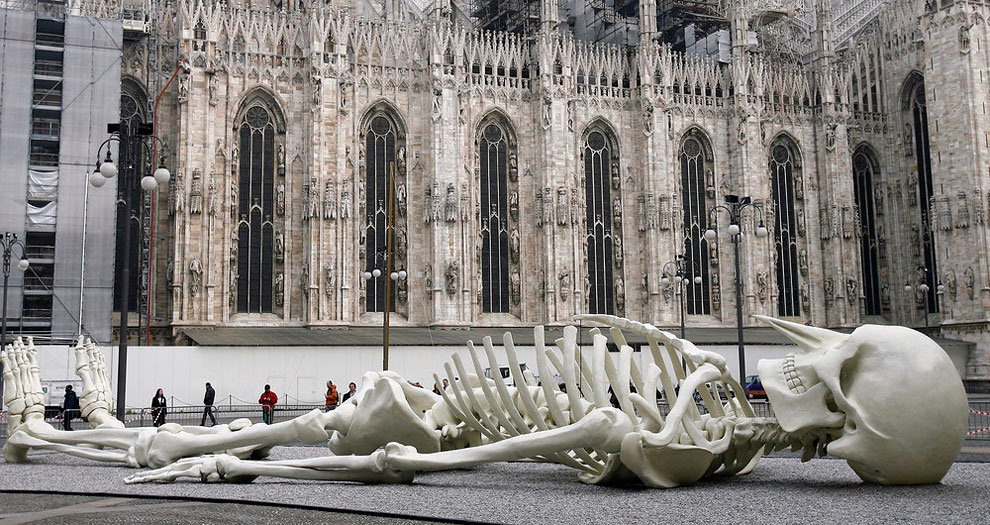 People look at a 24-meter-long sculpture by Italian artist Gino De Dominicis near the Duomo cathedral in Milan, March 30 2007. (Photo by Stefano Rellandini/Reuters) 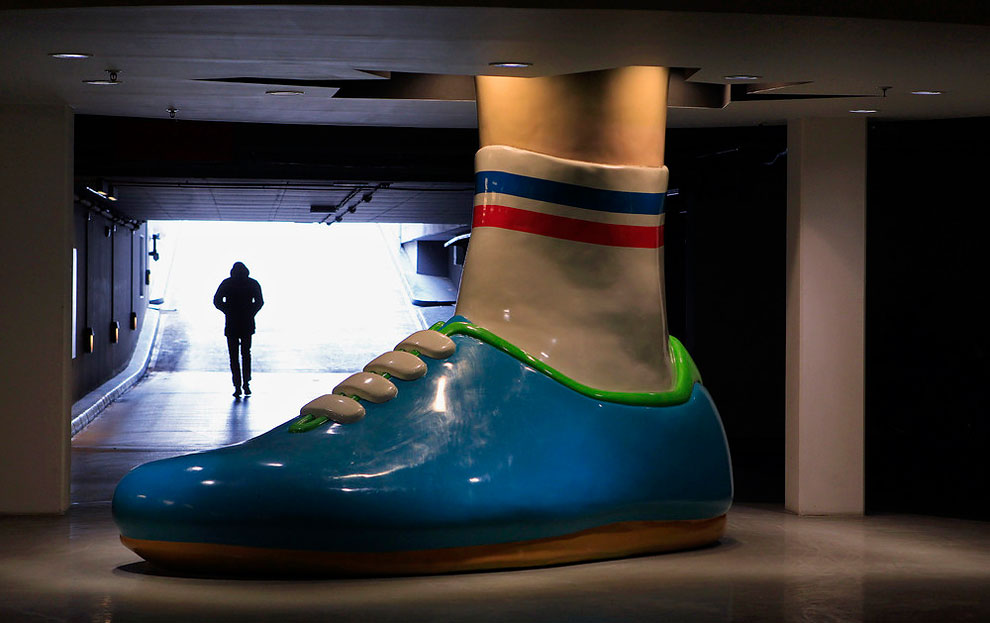 A pedestrian walks towards an art sculpture in an underground car park in Oslo June 17, 2012. (Photo by Cathal McNaughton/Reuters) 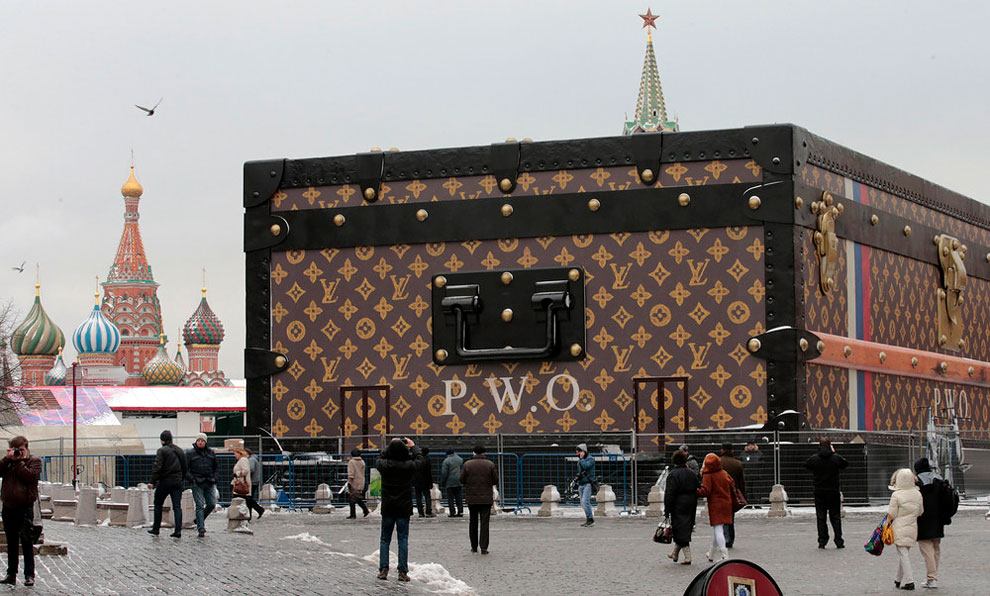 People walk past a Louis Vuitton pavilion in the shape of a giant suitcase, as the St. Basil’s Cathedral (L) and the Spasskaya Tower are seen in the background, in central Moscow, November 27, 2013. (Photo by Tatyana Makeyeva/Reuters) 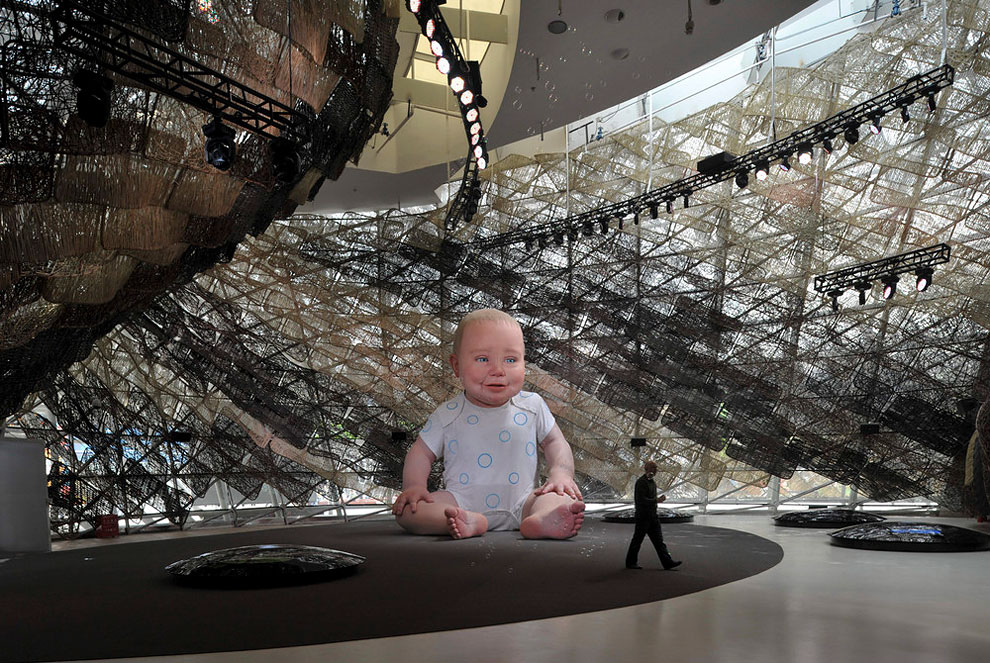 A visitor walks past an electronically animated giant baby inside the Spain pavilion at the Shanghai World Expo site April 27, 2010. (Photo by Reuters/Stringer) 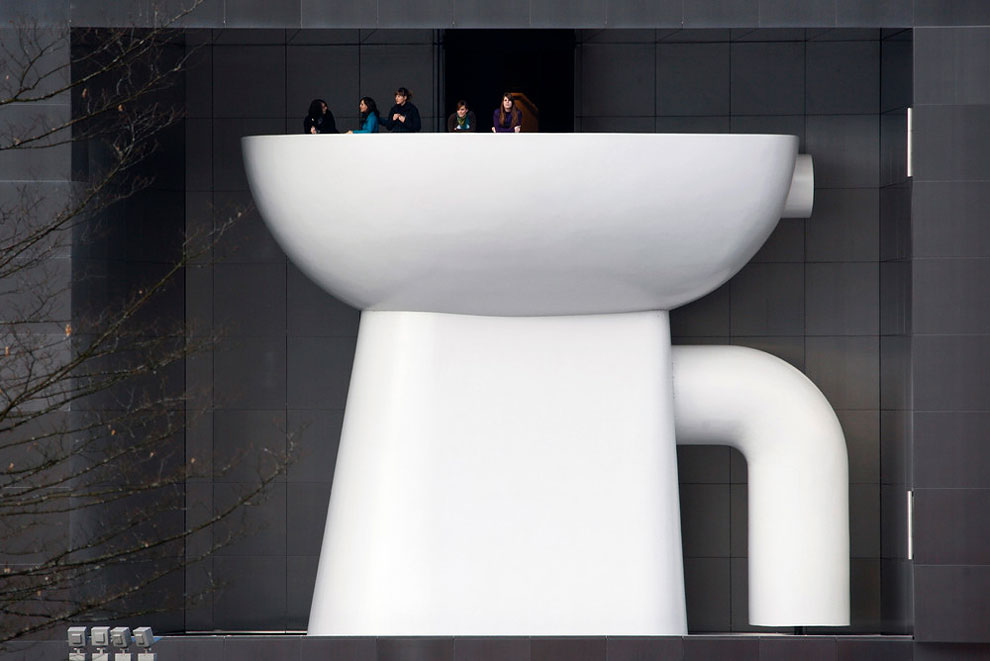 Employees of German bathroom ceramic and furniture firm Duravit stand outside on a balcony atop of a giant lavatory bowl, at their company headquarters in Hornberg in the Black Forest, Germany, January 22, 2010. (Photo by Vincent Kessler/Reuters) 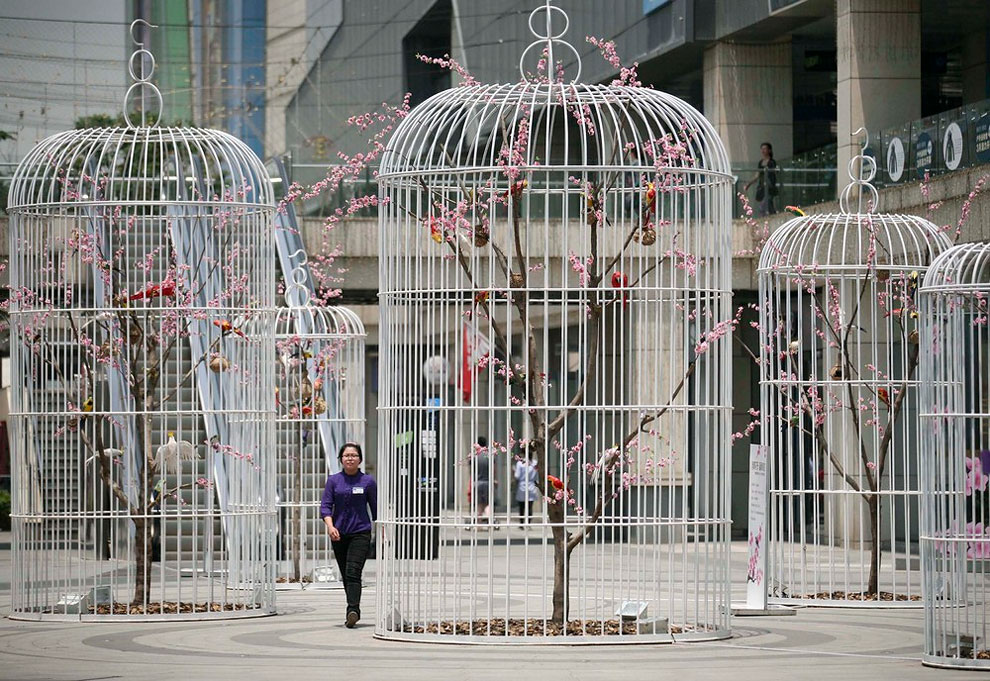 A woman walks past an installation of giant bird cages containing artificial trees and birds on a square in Nanjing, Jiangsu province, China May 22, 2013. (Photo by Reuters/Stringer) 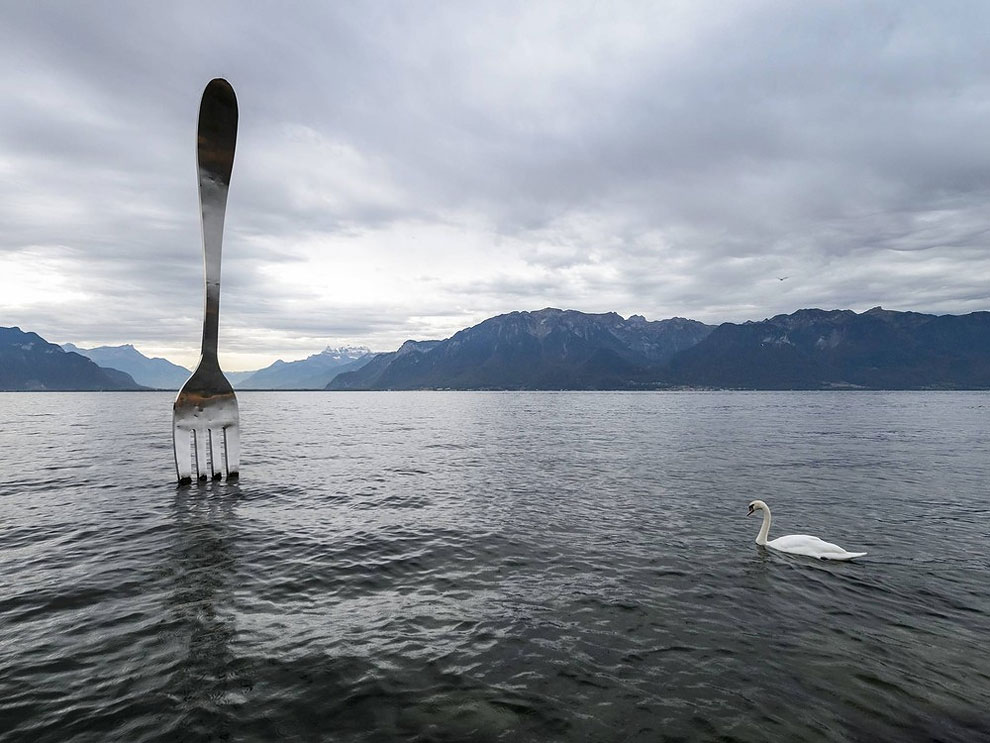