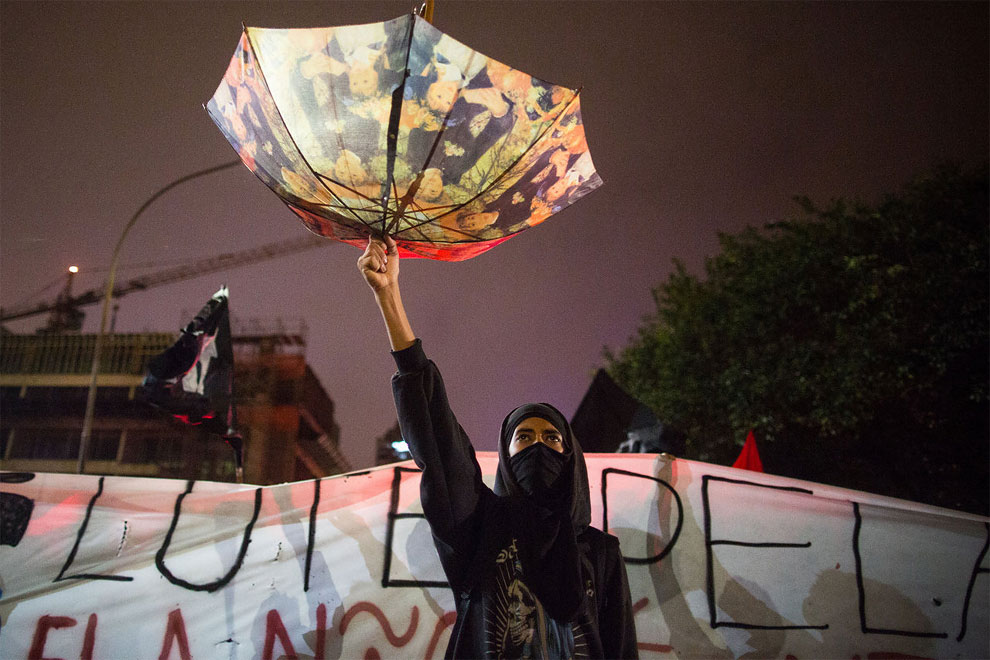 Chances are, this week you saw Guy Fawkes’ visage on the streets, as protesters in 481 cities worldwide participated in the Million Mask March, promoted by internet activist group Anonymous. (© FOTOBANK.RU/GETTY IMAGES) 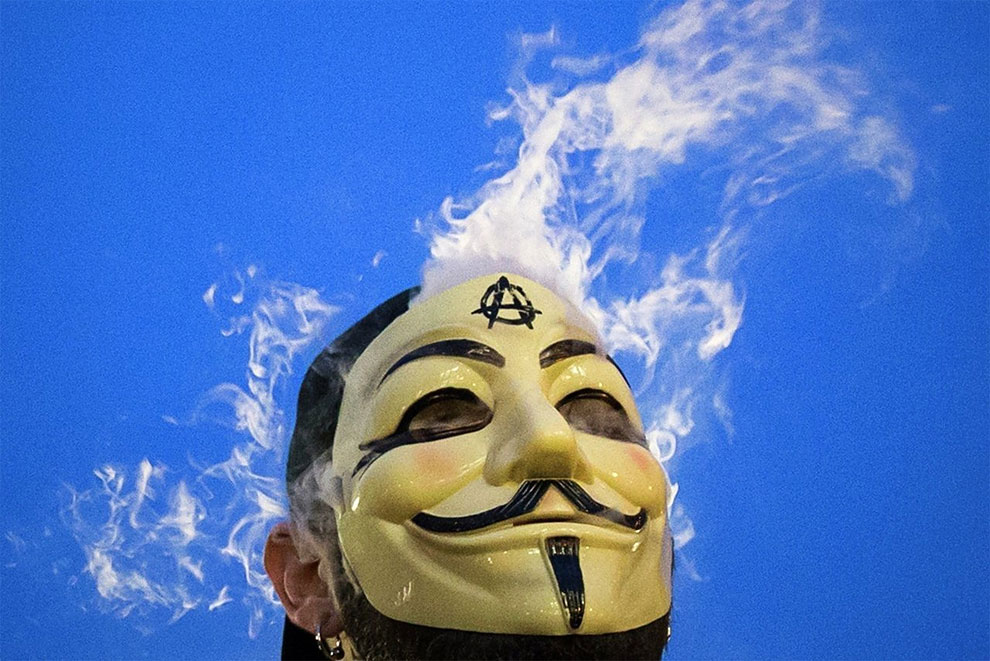 The march attracted a wide range of participants, including supporters of anti-capitalist, anti-war and pro-Palestine movements. (© REUTERS/ ELIZABETH SHAFIROFF) 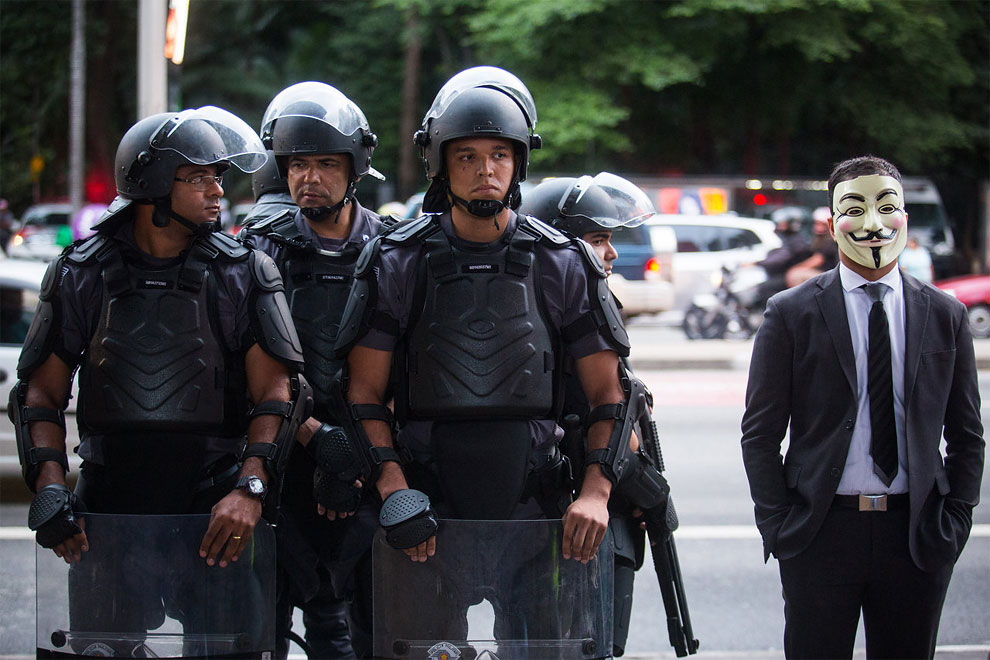 Anonymous is said to be a leaderless collective group that is opposed to government corruption and social injustice. (© FOTOBANK.RU/GETTY IMAGES) 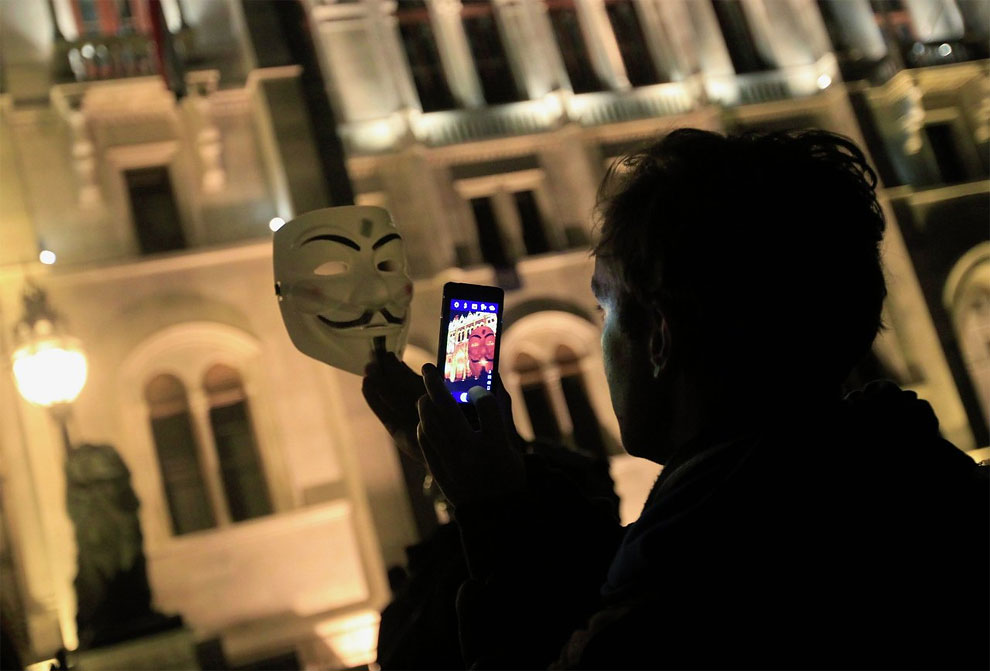 Anonymous includes a group of so-called hacktivists, who use computers and other modern technology to promote free speech, human rights and information ethics. In the past, members of Anonymous were behind a series of high-profile attacks on the websites of the governments of Tunisia and Israel, Visa and Mastercard, as well as the Church of Scientology. (© REUTERS/ BERNADETT SZABO) 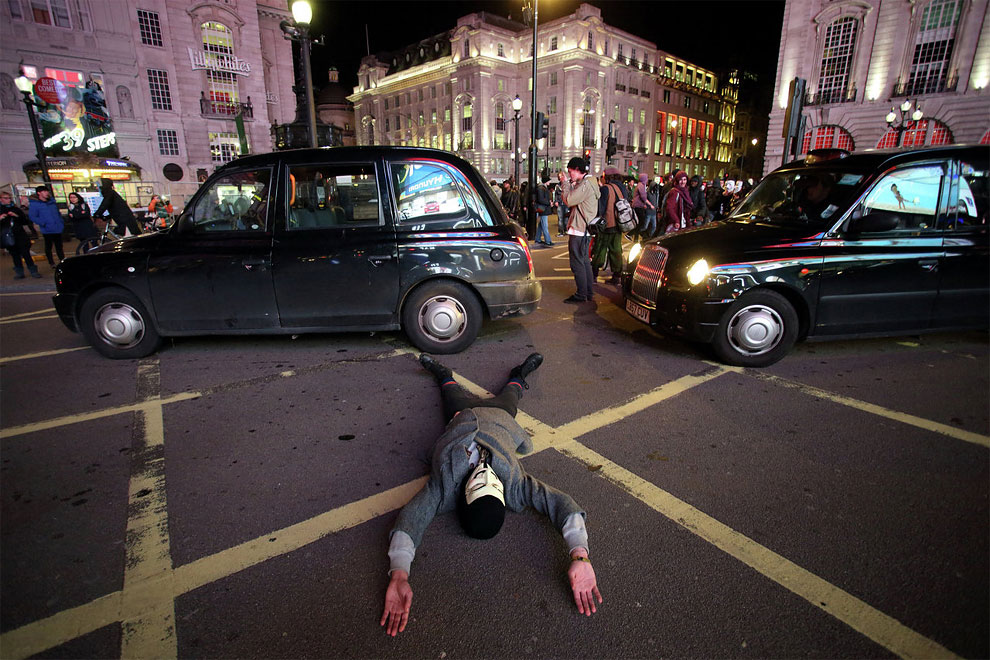 London saw one of the largest protests, as thousands wearing Guy Fawkes masks, popularized by the movie V for Vendetta, gathered in Parliament Square, before marching down towards the Buckingham Palace. (© FOTOBANK.RU/GETTY IMAGES) 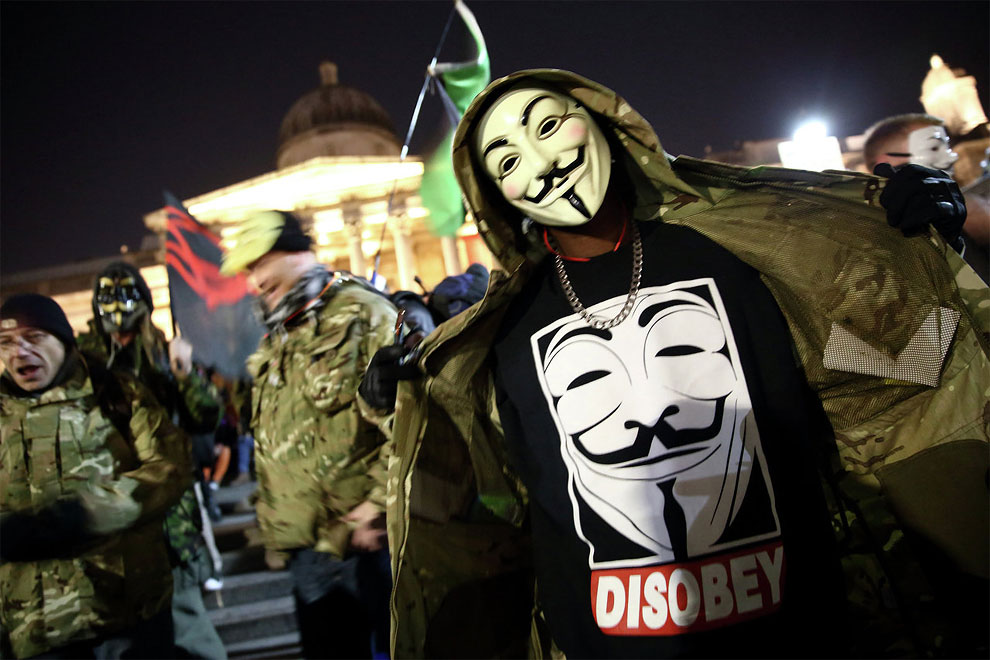 The protests in London were accompanied by a heavy police presence in riot gear. (© FOTOBANK.RU/GETTY IMAGES) 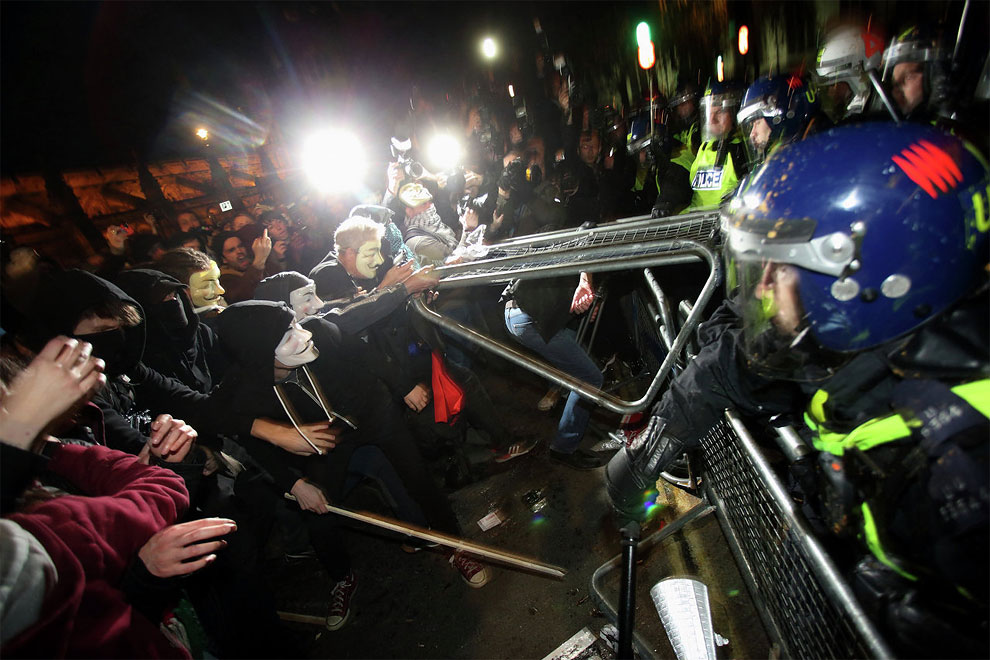 The crowd clashed with the British police on Wednesday evening; as a result, 10 people were arrested. (© FOTOBANK.RU/GETTY IMAGES) 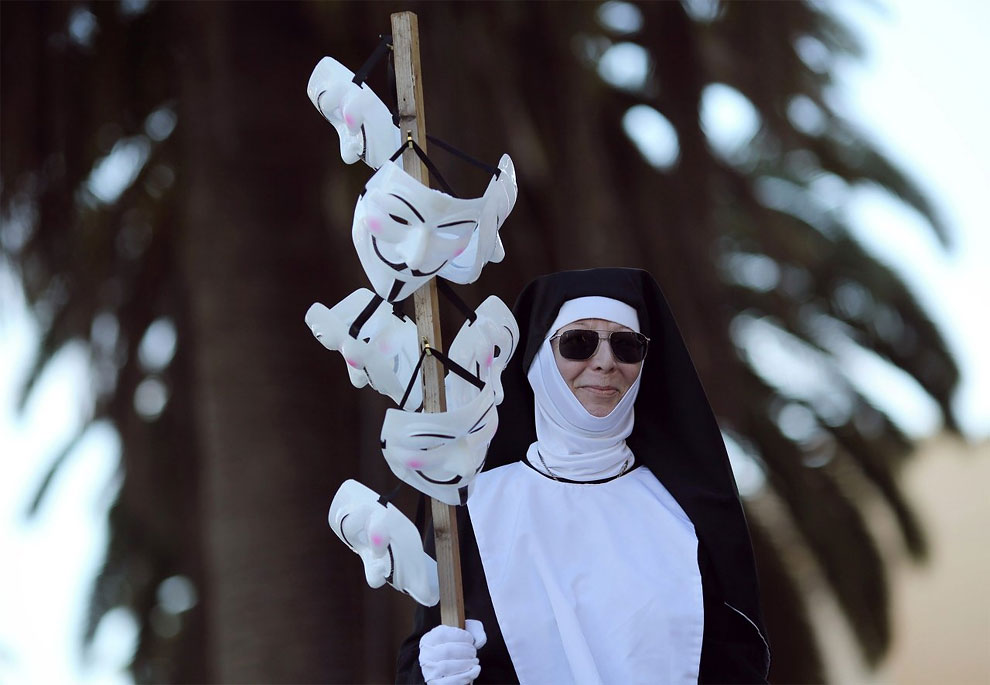 The Guy Fawkes mask, the mustached white face with a smile and rosy cheeks, was popularized by the movie “V for Vendetta” and has become the “face” of the protests. (© REUTERS/ ROBERT GALBRAITH) 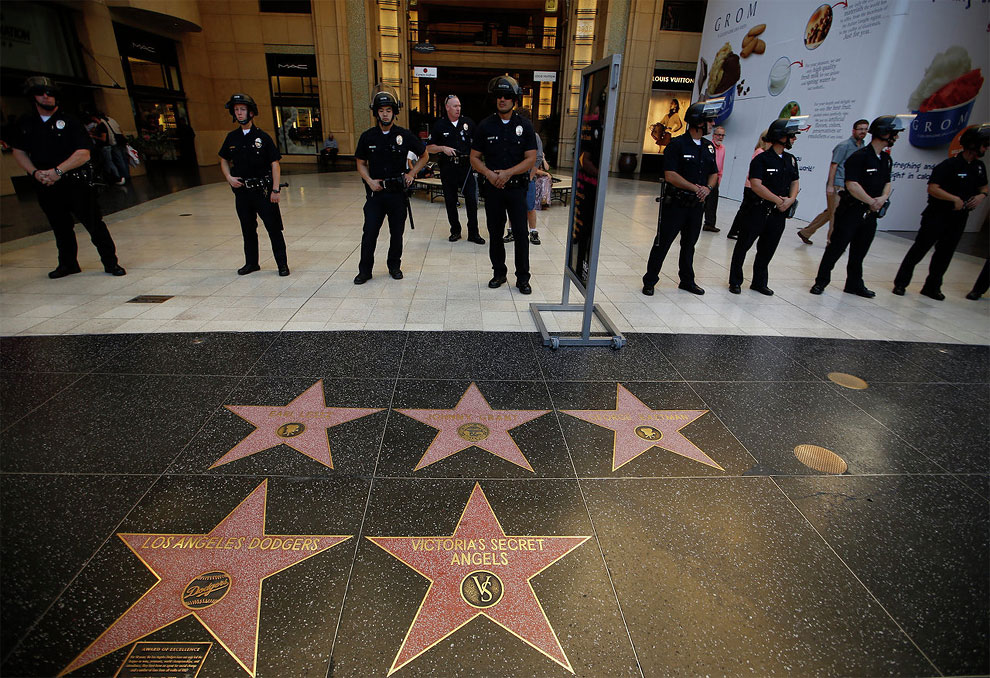 Protesters gathered throughout the United States, flooding the streets of New York, Portland, and Los Angeles, among others. (© AP PHOTO/ DAMIAN DOVARGANES) 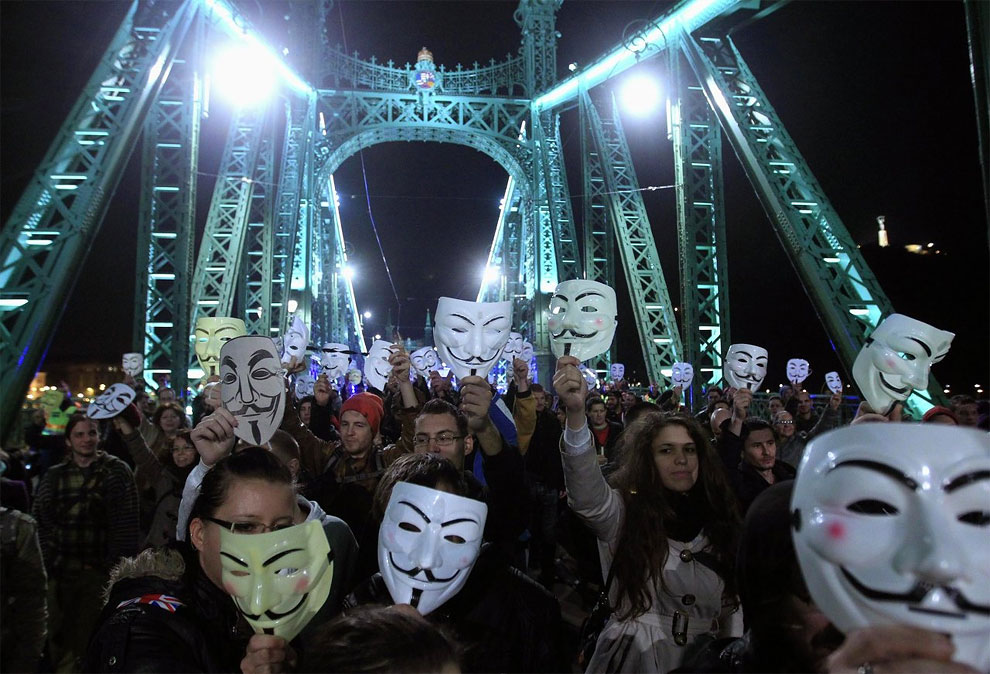 Supporters of the Anonymous group took to the Liberty Bridge in Budapest, Hungary. (© REUTERS/ BERNADETT SZABO) 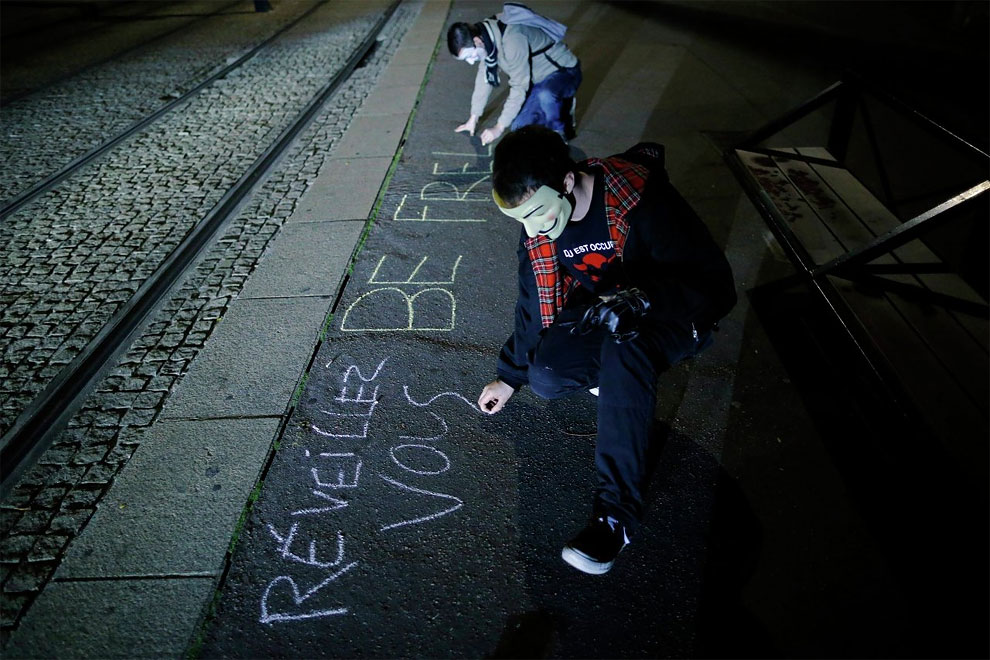 The French organized their own protests in solidarity with their neighbors north of the English Channel. (© REUTERS/ STEPHANE MAHE) 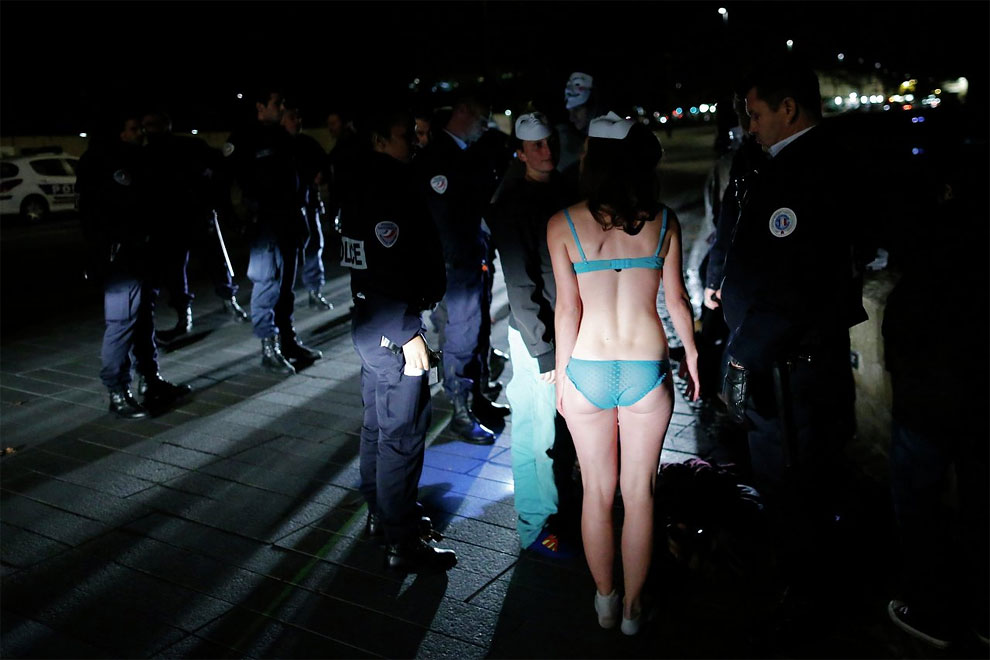 The protesters blocked 20 schools in Paris to pay tribute to Remi Fraisse, a 21-year old student killed during clashes with the police on October 26. (© REUTERS/ STEPHANE MAHE)