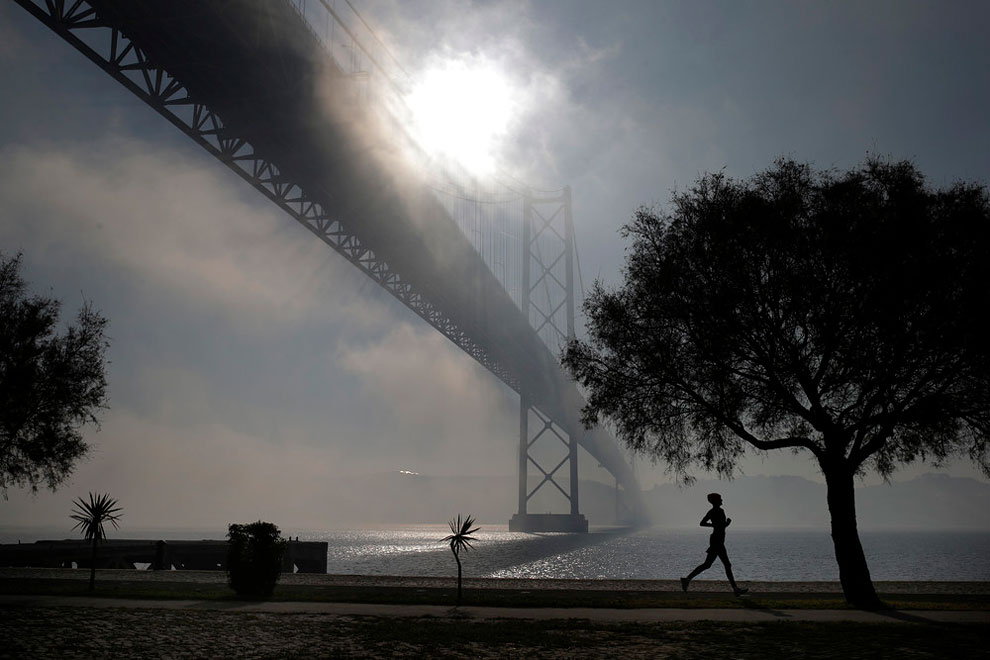 A woman jogs by the Tagus riverbank next to the April 25th bridge in Lisbon on a foggy morning, Monday, January 5, 2015. (Photo by Francisco Seco/AP Photo) 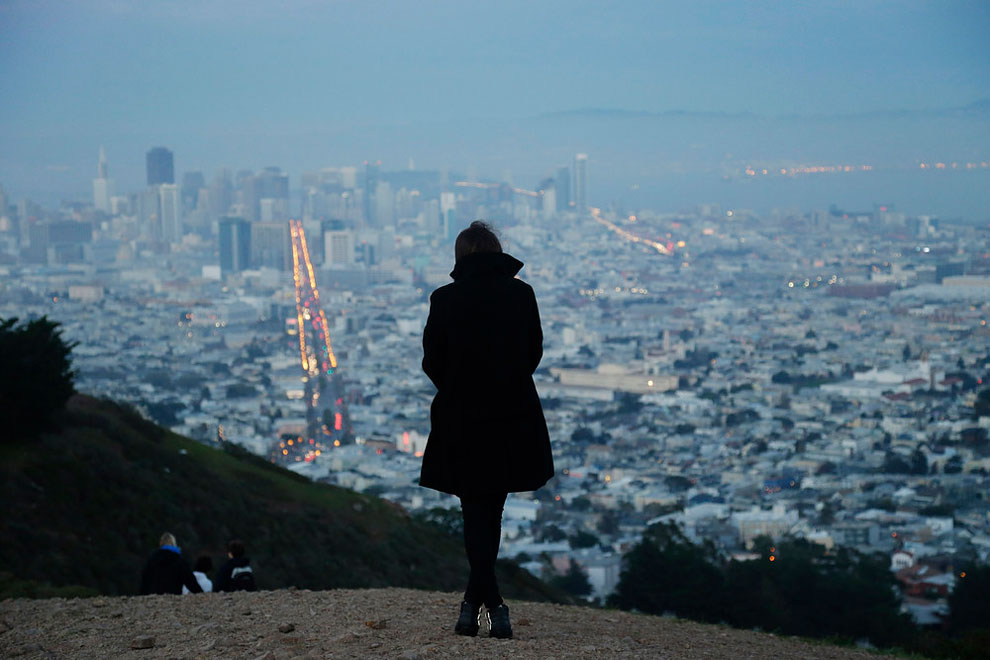 A visitor takes in a view of the downtown district from Twin Peaks on Friday, January 9, 2015, in San Francisco. (Photo by Marcio Jose Sanchez/AP Photo) 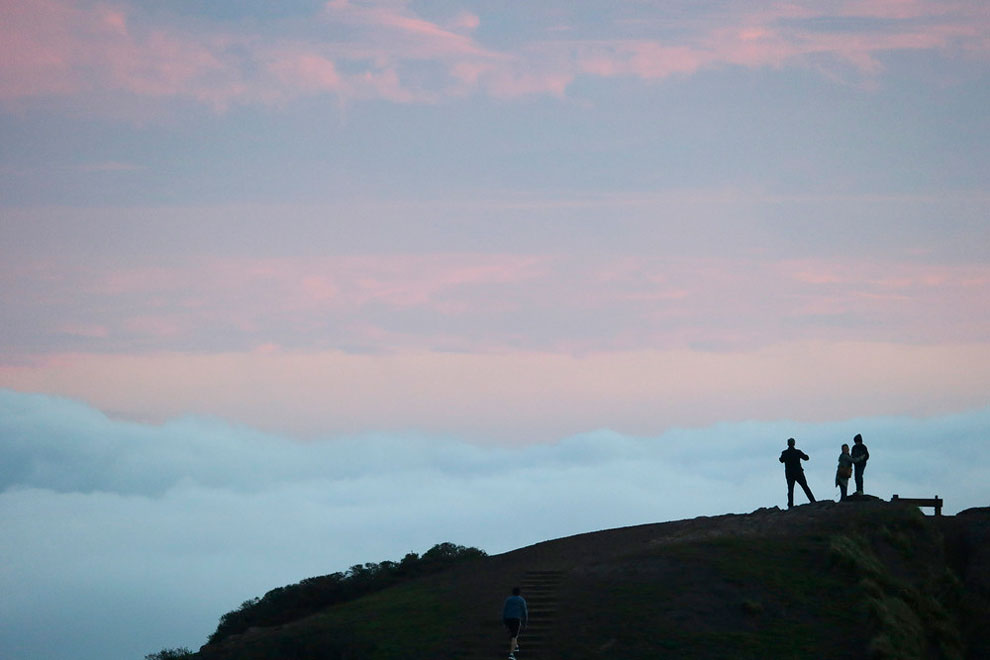 Visitors stand atop a hill as fog rolls in from a view on Twin Peaks on Friday, January 9, 2015, in San Francisco. (Photo by Marcio Jose Sanchez/AP Photo) 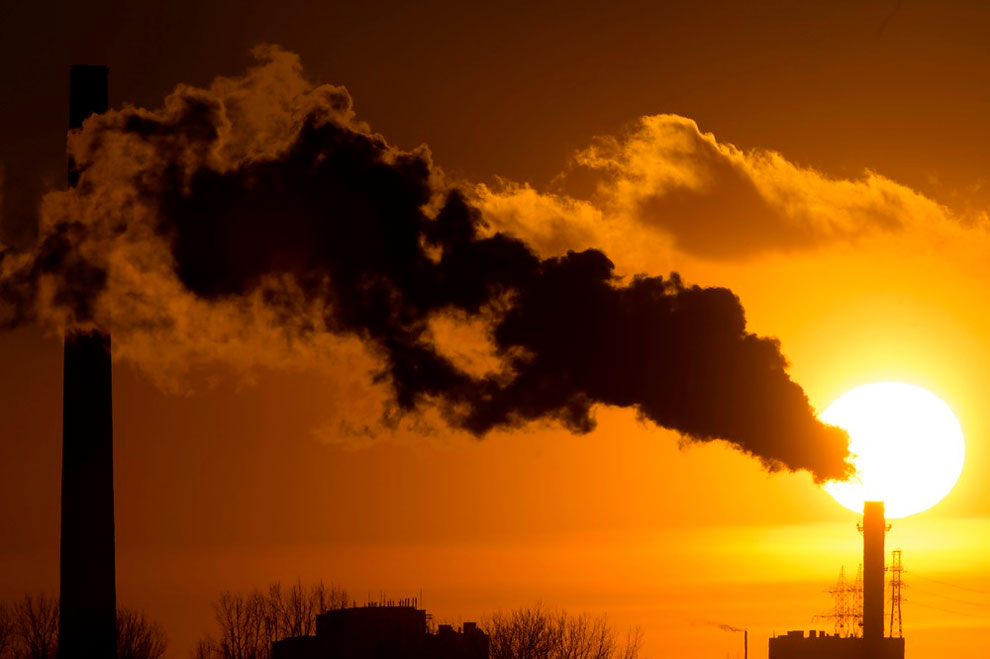 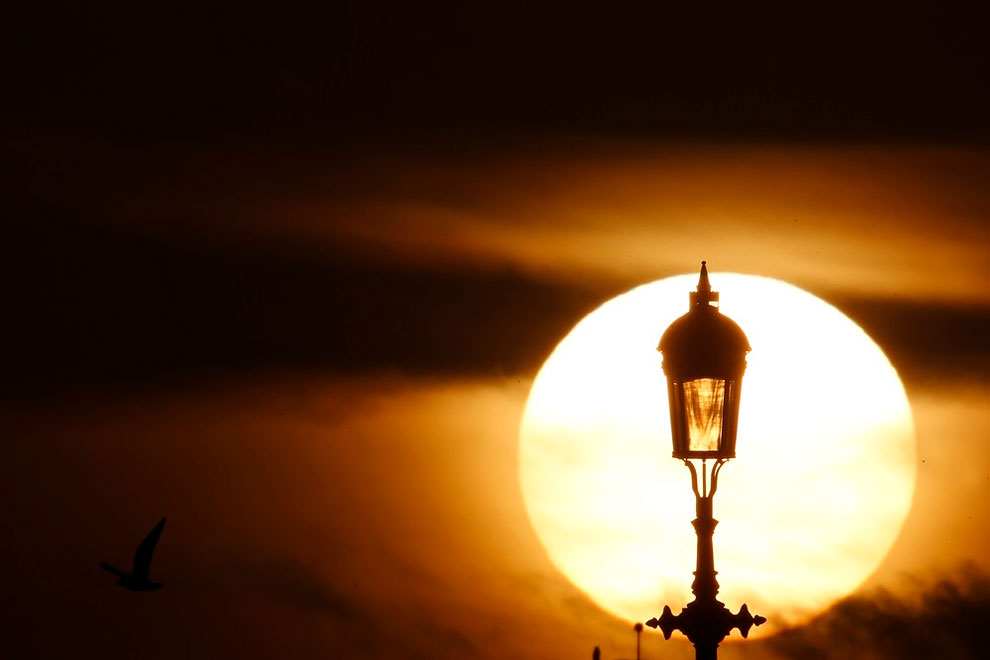 The sun sets behind a lamp in London January 8, 2015. (Photo by Stefan Wermuth/Reuters) 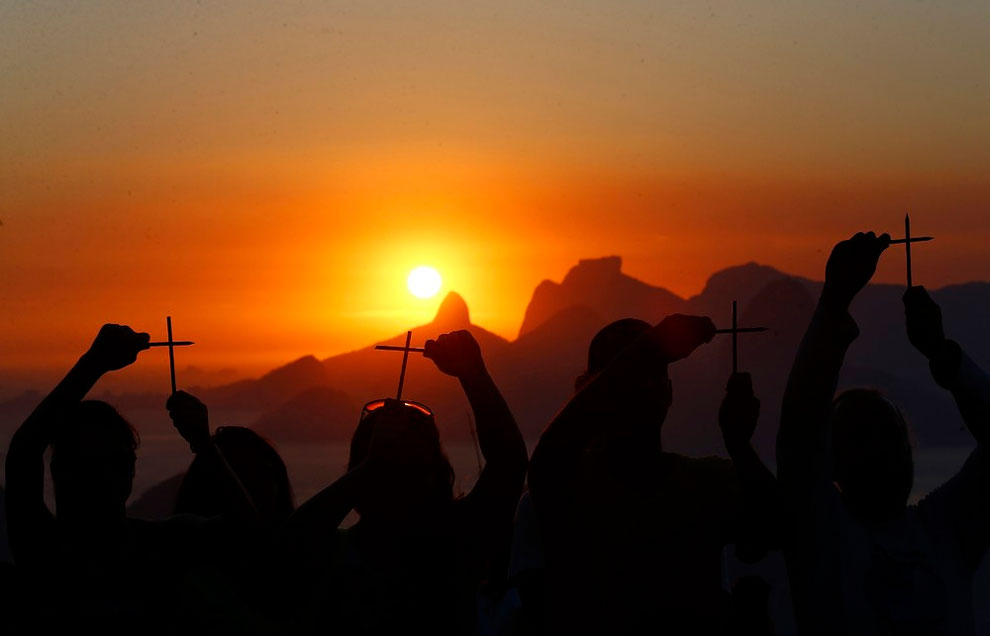 Demonstrators hold pencils in tribute to the victims of a shooting by gunmen at the offices of French satirical weekly Charlie Hebdo, during a demonstration organized by the NGO Rio de Paz (Rio of Peace) in Niteroi, near Rio de Janeiro, January 8, 2015. Armed and masked anti-terrorism police swooped on woodland villages northeast of Paris on Thursday in a manhunt for two brothers suspected of being the Islamist gunmen who killed 12 people at the French satirical weekly. (Photo by Ricardo Moraes/Reuters) 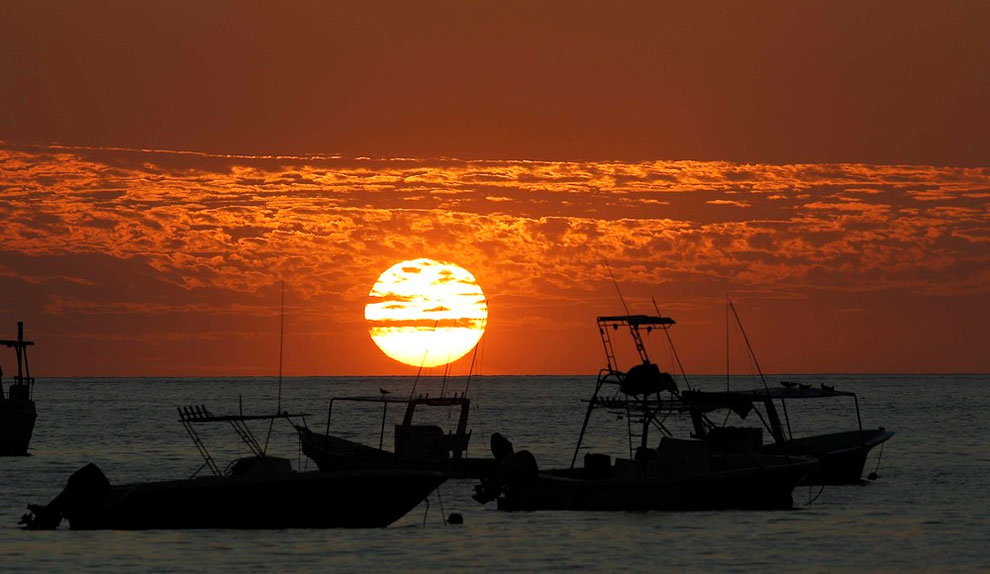 Boats are pictured during sunset at Herradura Beach in Punarenas, January 8, 2015. (Photo by Juan Carlos Ulate/Reuters) 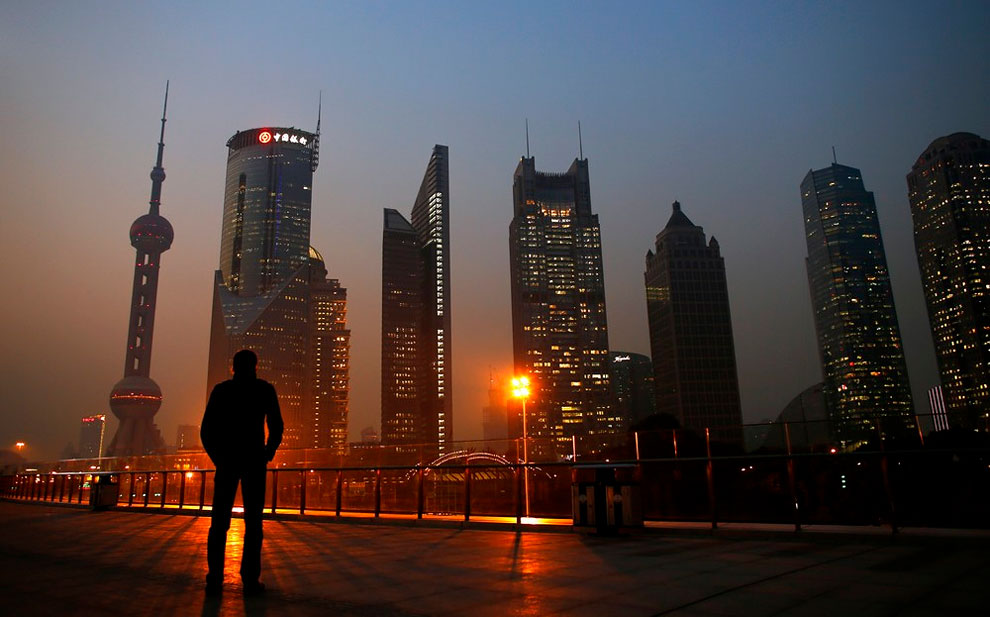 A man looks at the Pudong financial district of Shanghai in this November 20, 2013, file photo. China’s annual consumer inflation hovered at a near five-year low of 1.5 percent in December, little changed from November’s levels, signalling persistent weakness in the economy but giving policymakers more room to ease policy to support growth. (Photo by Carlos Barria/Reuters) 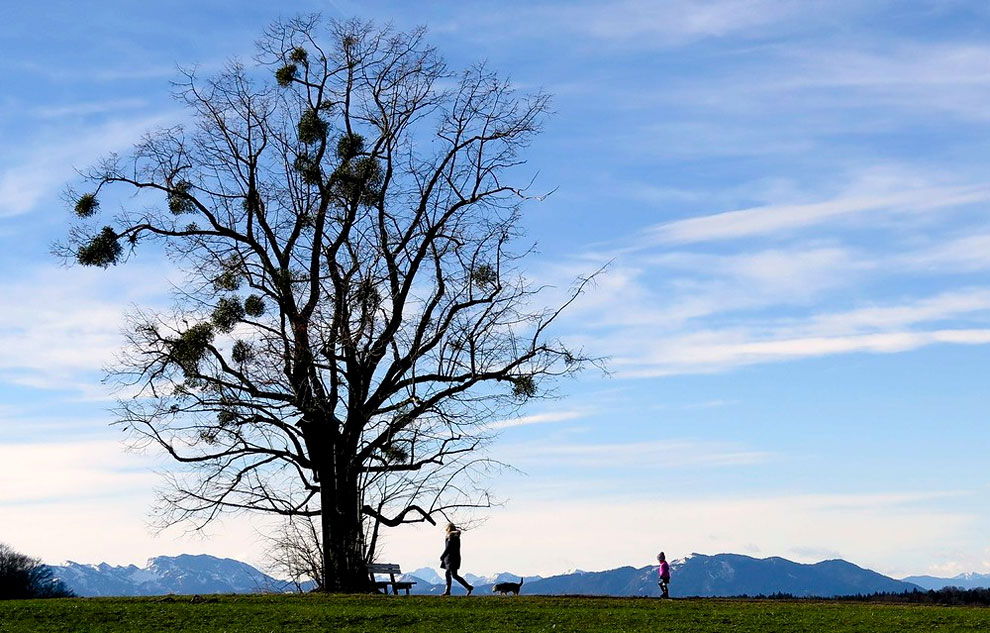 People walk past an ash tree in front of the mountains of the lake Tegernsee during a sunny day in Warngau January 10, 2015. (Photo by Michael Dalder/Reuters) 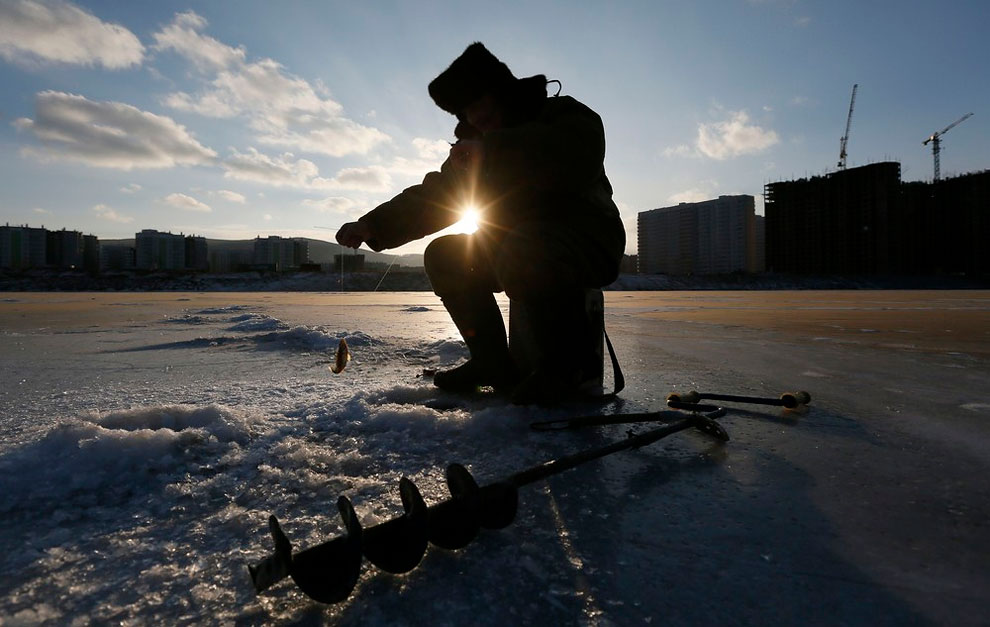 A man pulls out a Ruffe from an ice hole as he fishes on the frozen Abakan Bay of the Yenisei River in Russia’s Siberian city of Krasnoyarsk January 11, 2015. (Photo by Ilya Naymushin/Reuters) 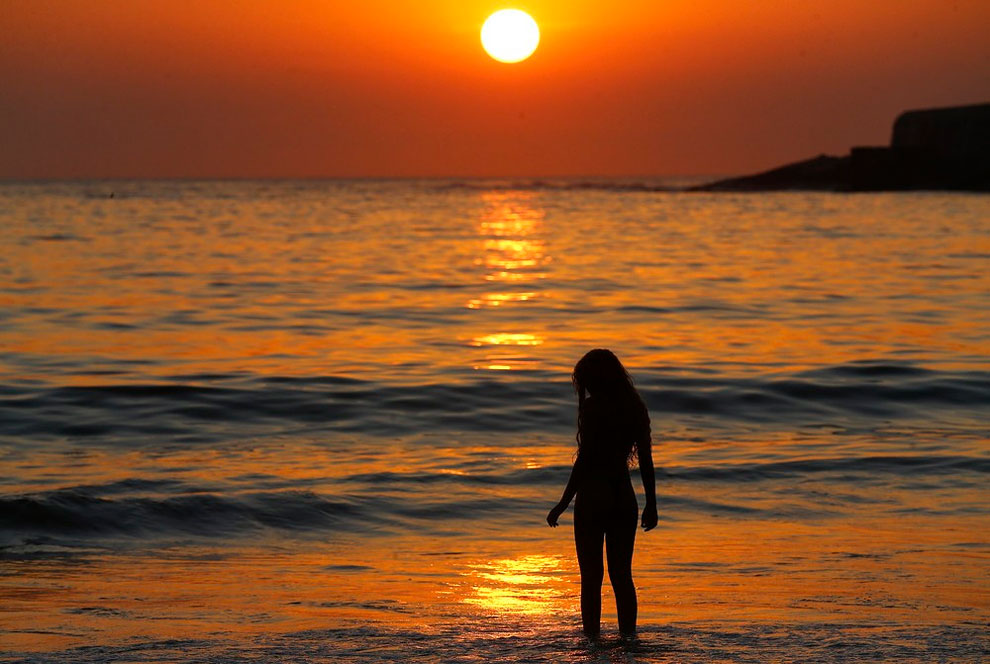 A woman gets into the waters of Copacabana beach as the sun rises in Rio de Janeiro, January 12, 2015. (Photo by Ricardo Moraes/Reuters) 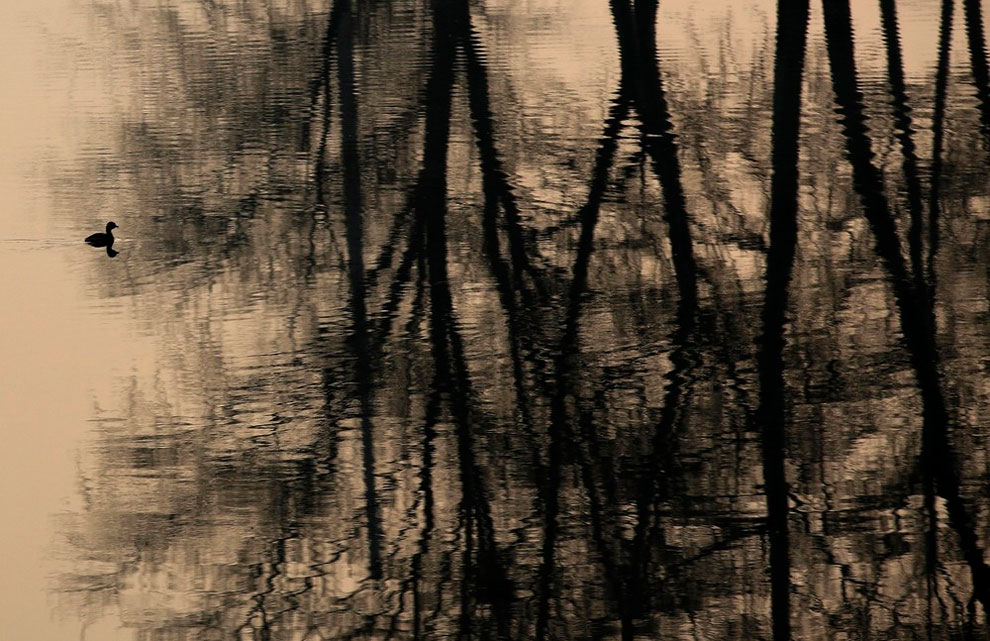 A waterbird swims in a canal bearing the reflection of trees in Beijing January 13, 2015. (Photo by Kim Kyung-Hoon/Reuters) 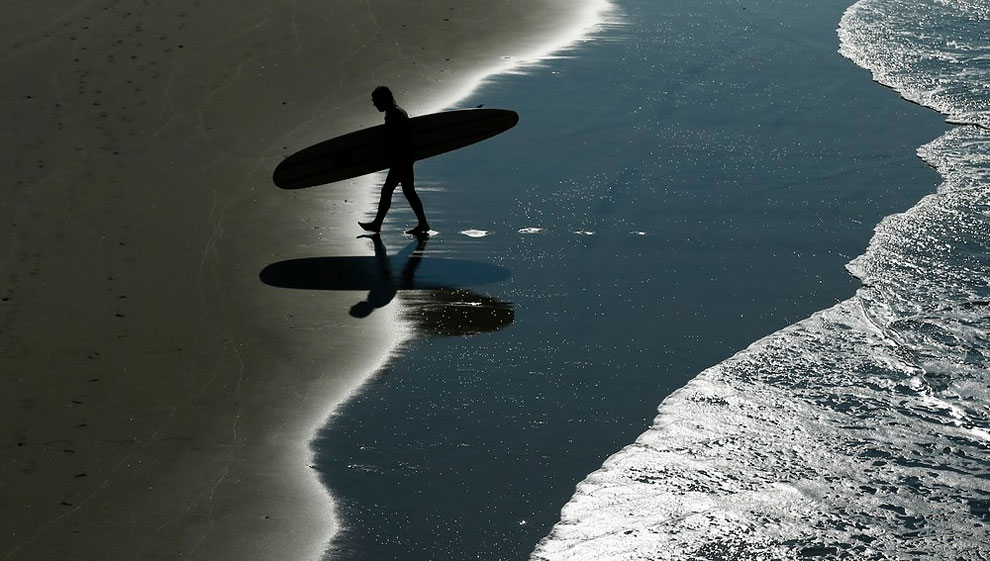 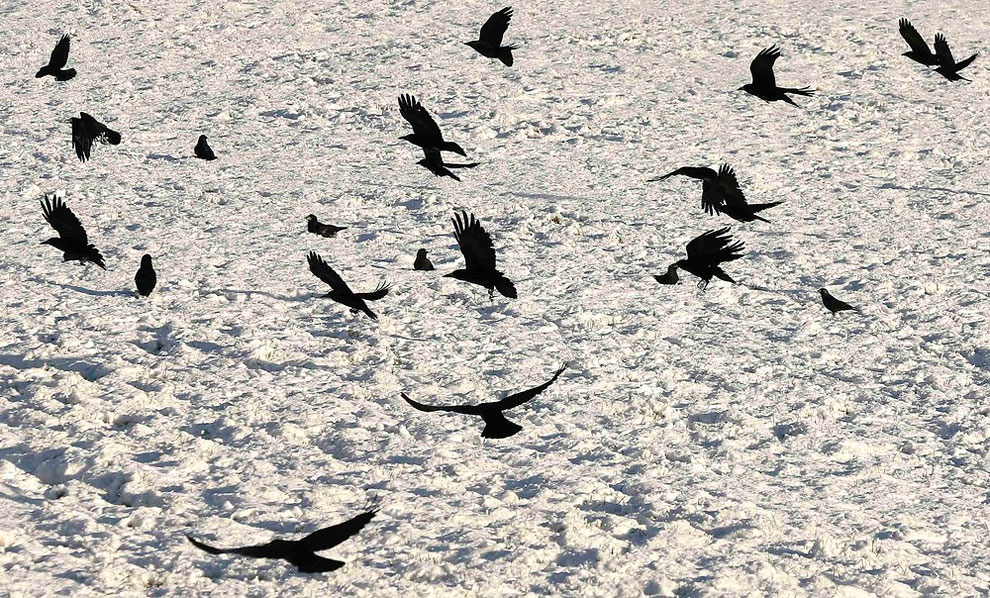 Crows fly across a field near the village of Dromore as heavy snow caused disruption across Northern Ireland January 16, 2015. (Photo by Cathal McNaughton/Reuters) 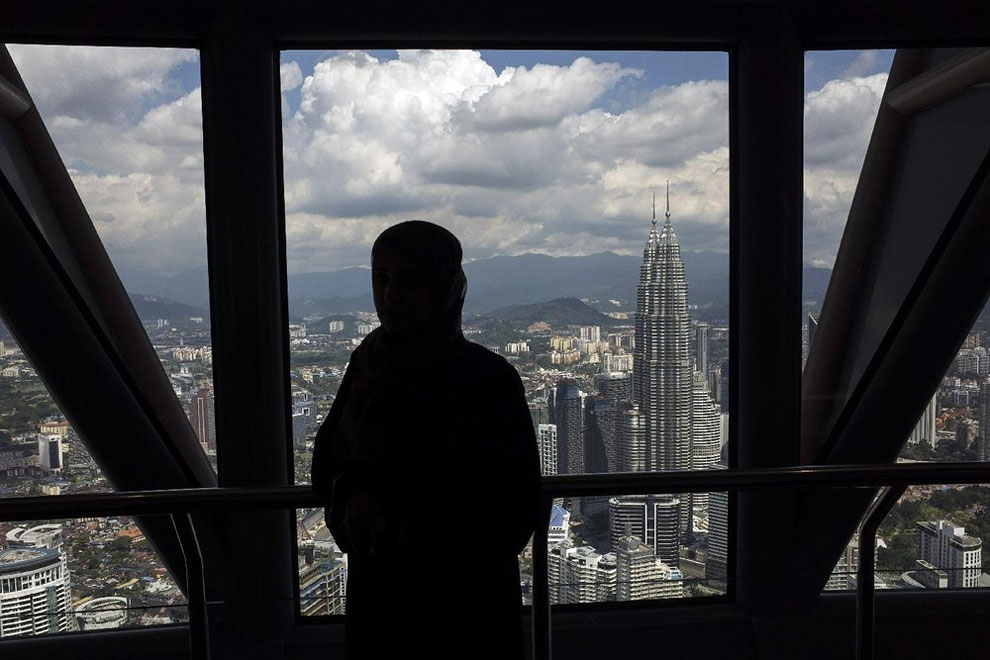 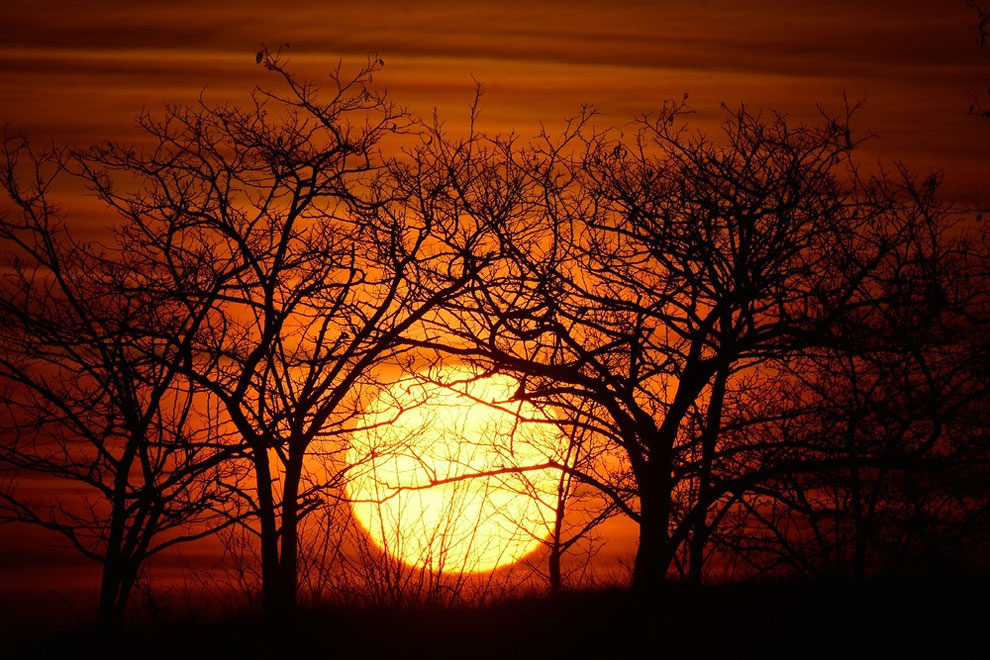 Some trees are silhouetted in front of the rising sun over the horizon in Hajdusamson, 232 kilometers east of Budapest, on January 13, 2015 morning. (Photo by Zsolt Czegledi/EPA) 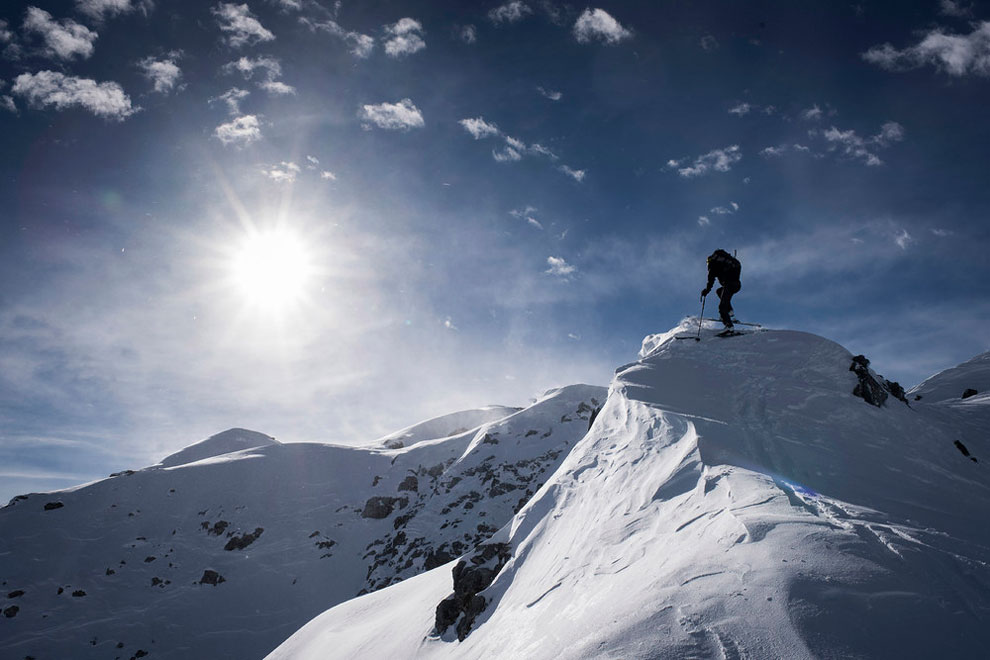 A backcountry skiier climbs up towards the Mederger Flue peak (2706 meters above sea level), on Monday, January 12, 2015, in Davos, Switzerland. (Photo by Gian Ehrenzeller/AP Photo/Keystone) 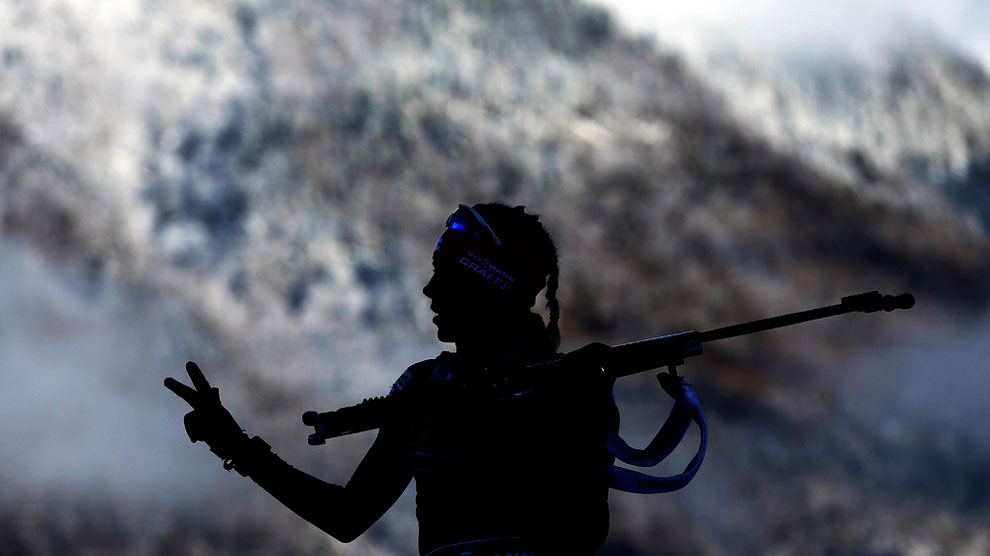 Kaisa Makarainen of Finland gestures to her coaches as she warms up prior to the women’s 12.5 km mass start at the Biathlon World Cup in Ruhpolding, Germany, Sunday, January 18, 2015. (Photo by Matthias Schrader/AP Photo) 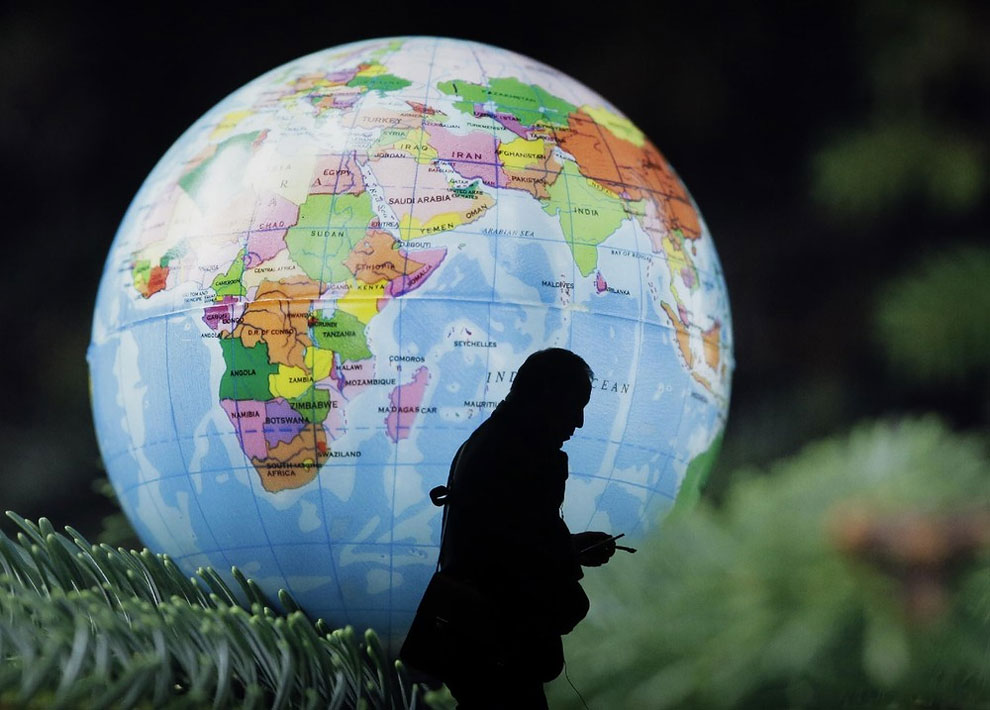 A man walks in front of a billboard featuring a globe at the Foreign Ministry in Berlin, Germany, Thursday, January 15, 2015. (Photo by Michael Sohn/AP Photo) 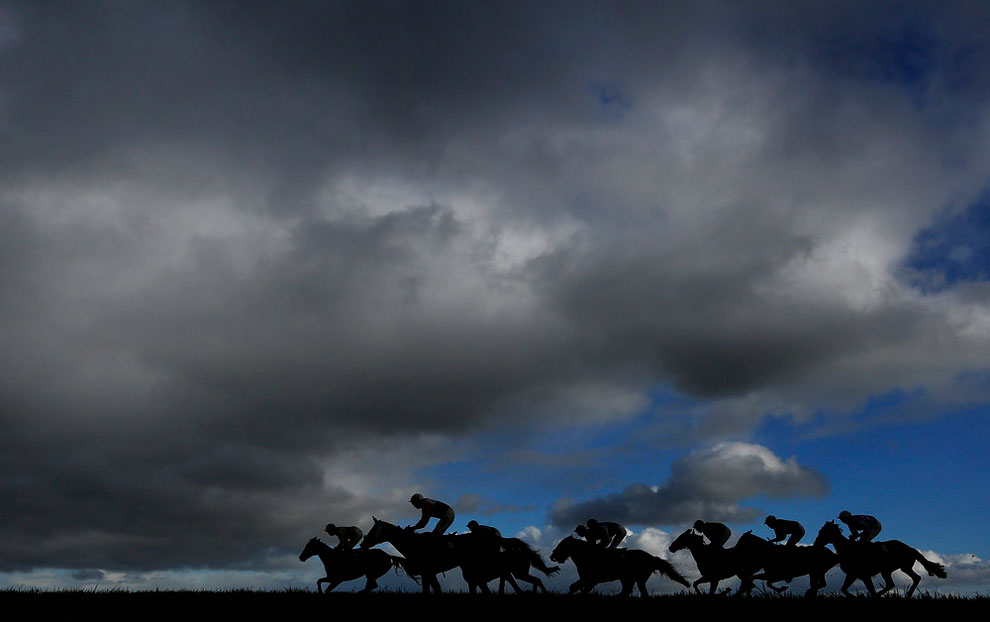 Runners in The Higos Insurance Services Somerton Handicap Hurdle Race make their way down the back straight at Wincanton racecourse on January 15, 2015 in Wincanton, England. (Photo by Alan Crowhurst/Getty Images) 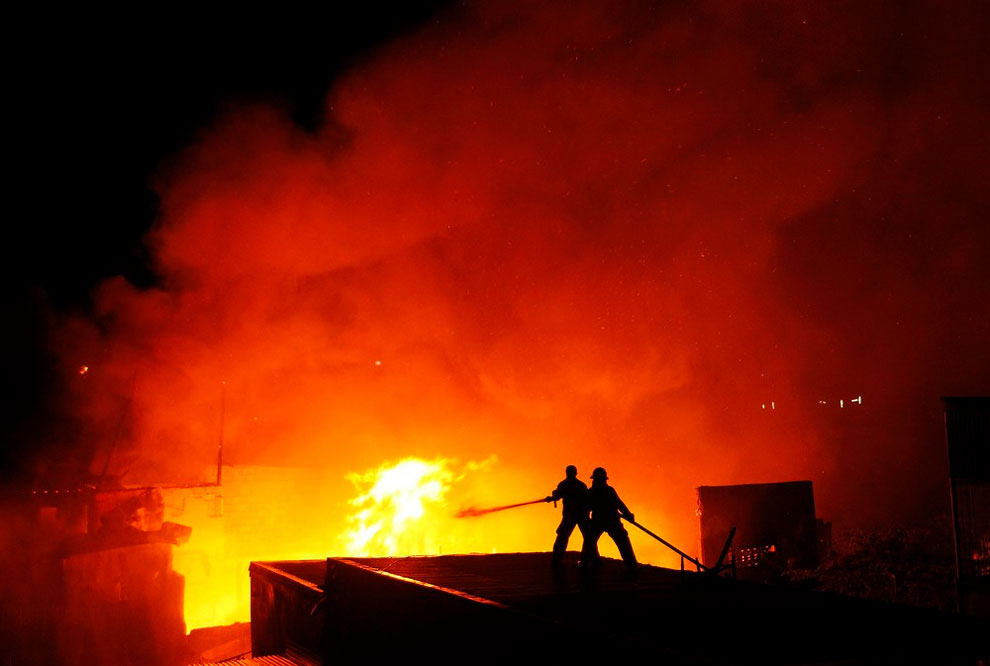 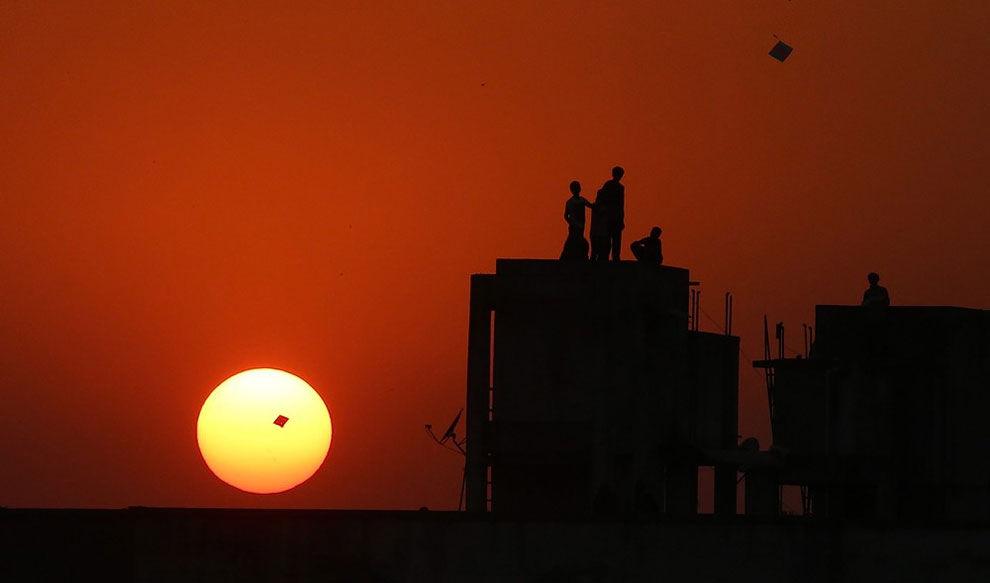 Indian people stands on the terrace of a building as they fly kites during a sunset in Ahmedabd, India, 06 January 2015. Kite-makers are preparing for the annual Hindu festival Makar-Sankranti (Uttarayan), during which people fly kites and compete in kite flying competitions. Makar-Sankranti is celebrated on 14 January of every year. (Photo by Divyakant Solanki/EPA) 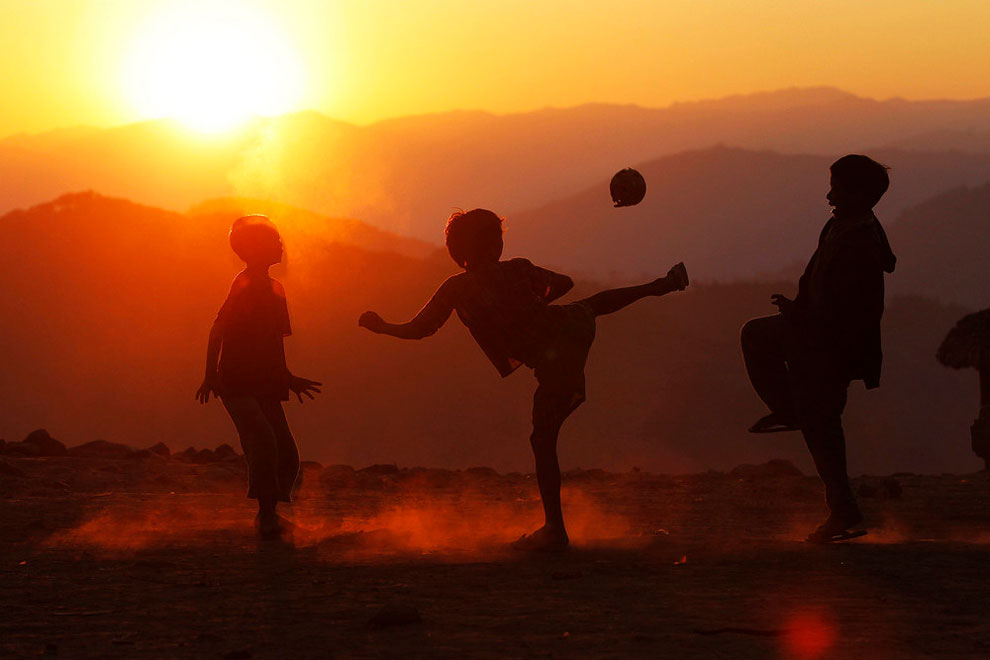 Boys play with a ball at sunset in Yansi village, Donhe township in the Naga Self-Administered Zone in northwest Myanmar December 25, 2014. On Myanmar’s mountainous frontier with India live the Naga, a group of tribes historically known as warriors who kept the heads of enemies they killed. In Myanmar, around 120,000 people live in the Naga Self-Administered Zone in Sagaing Division where they survive mainly by subsistence farming and hunting. Cultural practices are changing – for example, younger men now wear trousers rather than traditional loincloths – although many Naga communities remain impoverished and inaccessible by road. The Naga speak dozens of languages and many of those in Myanmar use Burmese as a lingua franca. (Photo by Soe Zeya Tun/Reuters) 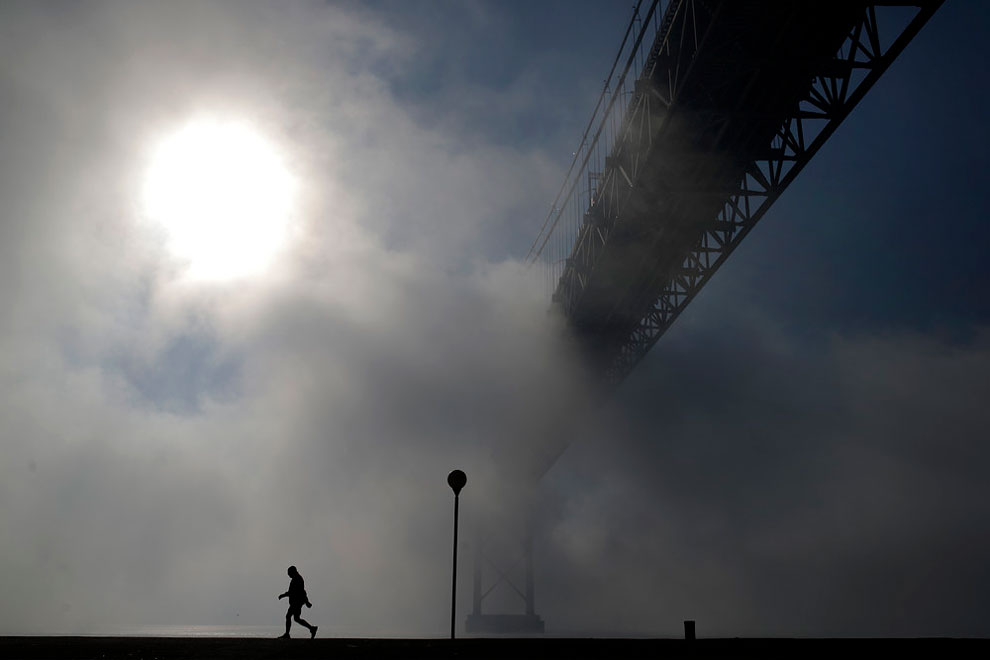 A man walks near the April 25th bridge by the Tagus riverbank in Lisbon on a foggy morning, Monday, January 5, 2015. (Photo by Francisco Seco/AP Photo) 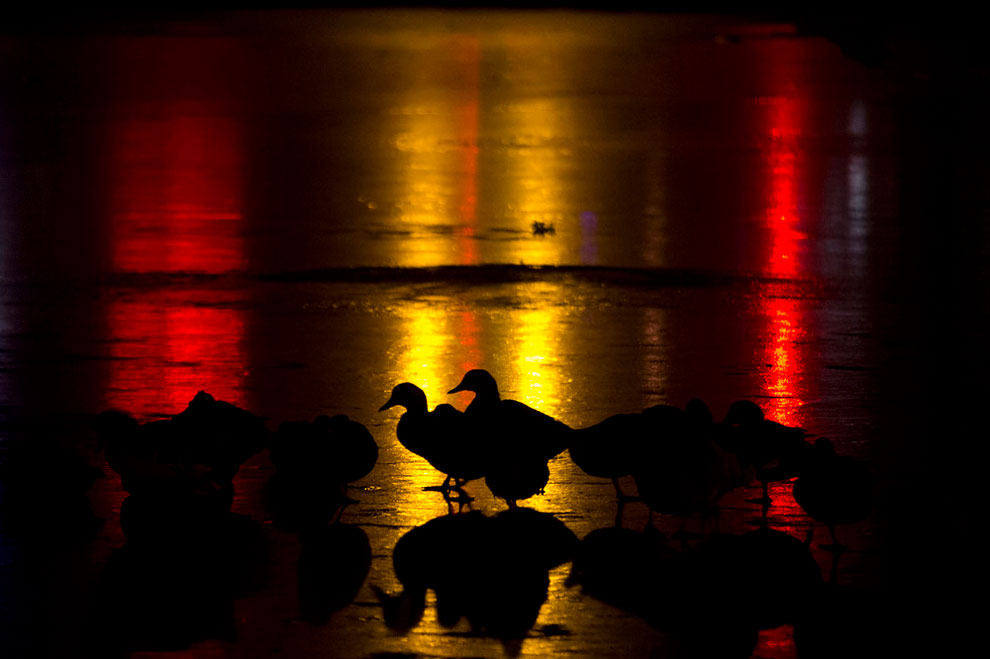 Ducks rest on the frozen surface of a lake illuminated by lights from a nearby bar in Beijing, Monday, January 12, 2015. Beijing’s winter is a time to partake in winter activities such as ice skating, ice-karting and for the those hardy enough winter swimming. (Photo by Ng Han Guan/AP Photo) 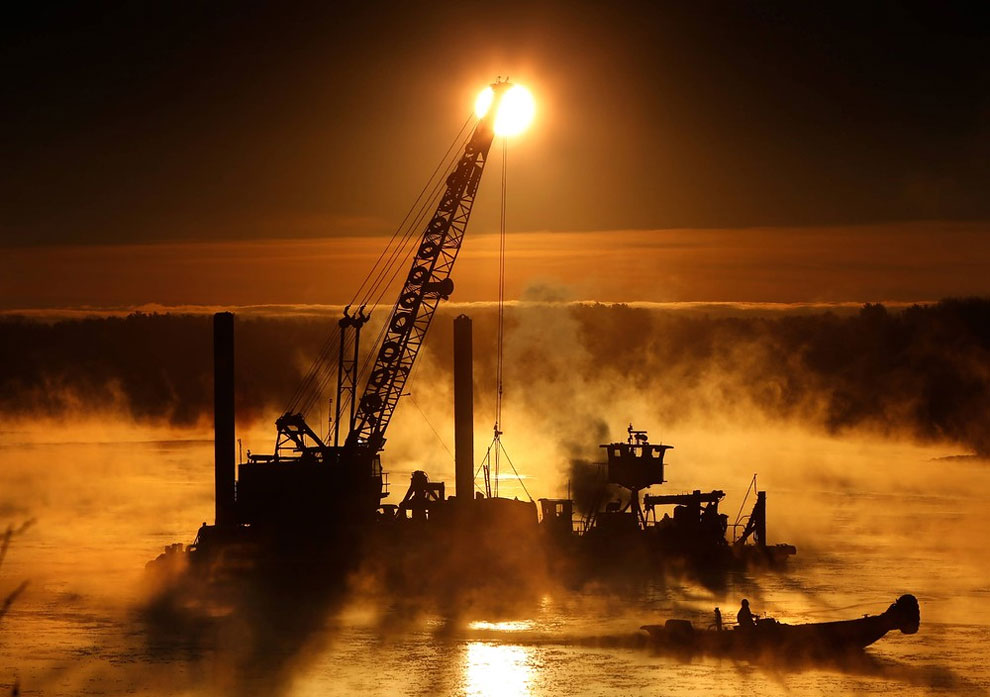 Arctic sea smoke rises on the Royal River in Yarmouth, Maine, as a worker uses a push boat to break ice forming around a dredging operation, Wednesday morning, January 14, 2015. The temperature at sunrise was minus 8 degrees. Sea smoke occurs when extremely cold air passes over warmer water. (Photo by Robert F. Bukaty/AP Photo)

Moody And Cinematic Urban Landscapes By Kevin Hufnagl
Wait, What? The Spectacular Winning Images of the Potato Photographer of the Year 2021!
Photographer Evgeni Kolesnik Makes Conceptual Photos With Models Wearing Colored Flowers
X-Ray Photography by Paula Fontaine
Romantic Photos of the ’60s Couples
Internet K-hole: the Best Photo Blog You've ever Seen!
Photographer Tom Hegen Captures Aerial Series Of Breathtaking Tulips
80 Wonderful Black And White Photographs Of The Famous (And Not So Famous) People Who Have Left Their Mark On History
"The Genesis Of Design": Check Out This Amazing Display Of Carpets In Caverns
Photos Of Tokyo In The 1970s Seen Through The Eyes Of A Canadian Who Moved There At The Time
Reuters Pictures of the Year 2014, Part 11
Anne Vyalitsyna for Numero #135
Hong Kong Streets In Neon – The Haunting Photographs Of Zaki Abdelmounim
Travel to Esco, An Abandoned Village In Spain
Photographer Captures Socialist Architecture Of North Korea In Pastel Aesthetic
Photographer Erik Almas
Abandoned USA: Stunning Urbex Photography By Tessa Alexandra Shea
What Does The Ideal Man Look Like? The Answer May Depend On Where You Live
Extreme On Water Marine Photography By Kurt Arrigo
The Obama Wedding Photos Will Remind You Of Better Times
Beautiful Black And White Portrait Photography By Daria Pitak
Photographer Ask Strangers To Reveal Their Deepest Regrets In Life
Mo Farah Running Away from Things
Incredible Photos Of Planes Passing Just Over Maho Beach
Meet Zach Cooley, A “Moon Chaser” Who Uses Camera Tricks To Make The Moon Look Really Huge
Cyberpunk Neon Fantasy: Moscow’s Outskirts As You’ve Never Seen Them Before
2014 National Geographic Photo Contest, Week 2
Before She Was Famous, Marilyn Monroe Was Paid Just $10 an Hour to Pose for Pin-up Artist Earl Moran in the Late 1940s
Fascinating Photographs Of The World's Biggest Albino Family
Photographer David Stewart Turns His Lens On The Faceless World Of Paid Content And The Dehumanisation Of Corporate Globalization
silhouettes