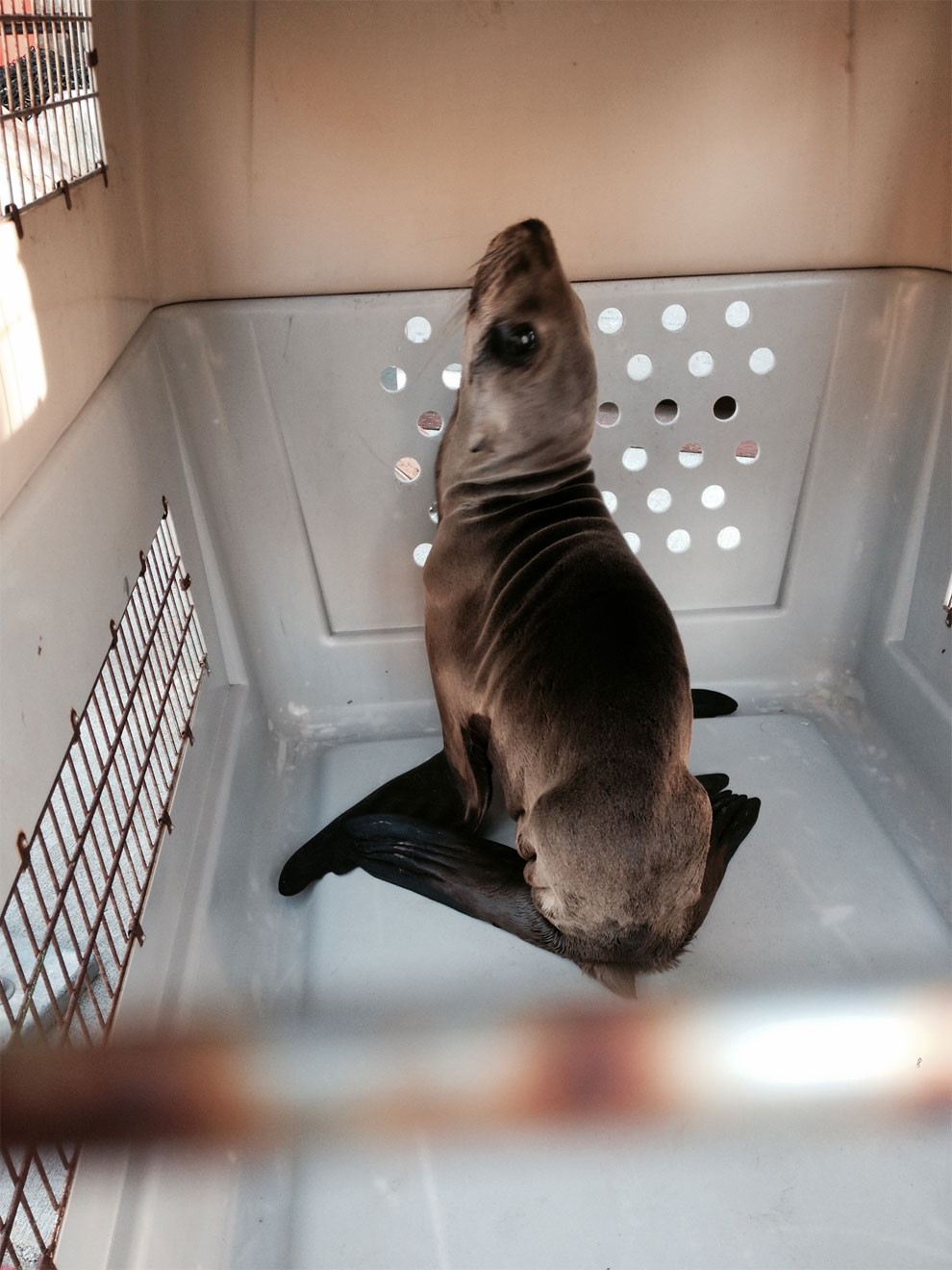 An emaciated young sea lion that was probably looking for food was rescued along a major boulevard in San Francisco, more than 1,000 feet from the ocean is seen in a cage at the the Marine Mammal Center in Sausalito, California on Wednesday, February 11, 2015. Hundreds of sick and starving sea lion pups and yearlings are turning up on California beaches. What’s separating the animals, who should be nursing, from their mothers remains unclear. (Photo by AP Photo/National Park Service) 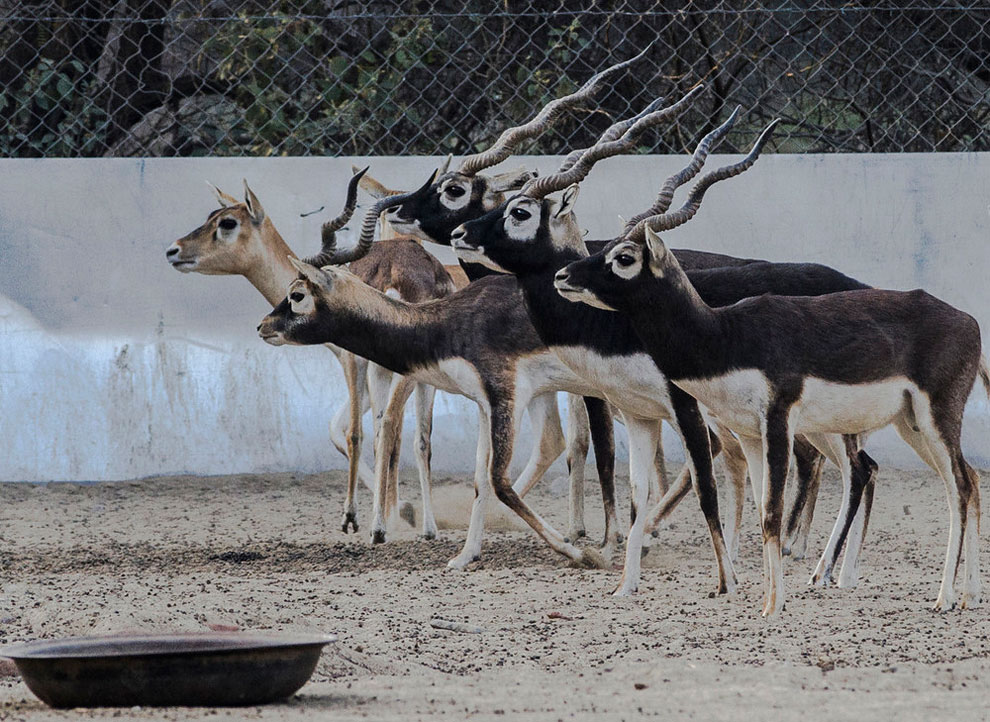 Black Bucks donated by the Netherlands play at the Lal Sohanra national park on the outskirts of Bahwalpur, Pakistan, 13 February 2015. The USA and the Netherlands helped in rehabilitation of the population of the endangered Black Bucks species by donating pairs of these animals to Pakistan. (Photo by Omer Saleem/EPA) 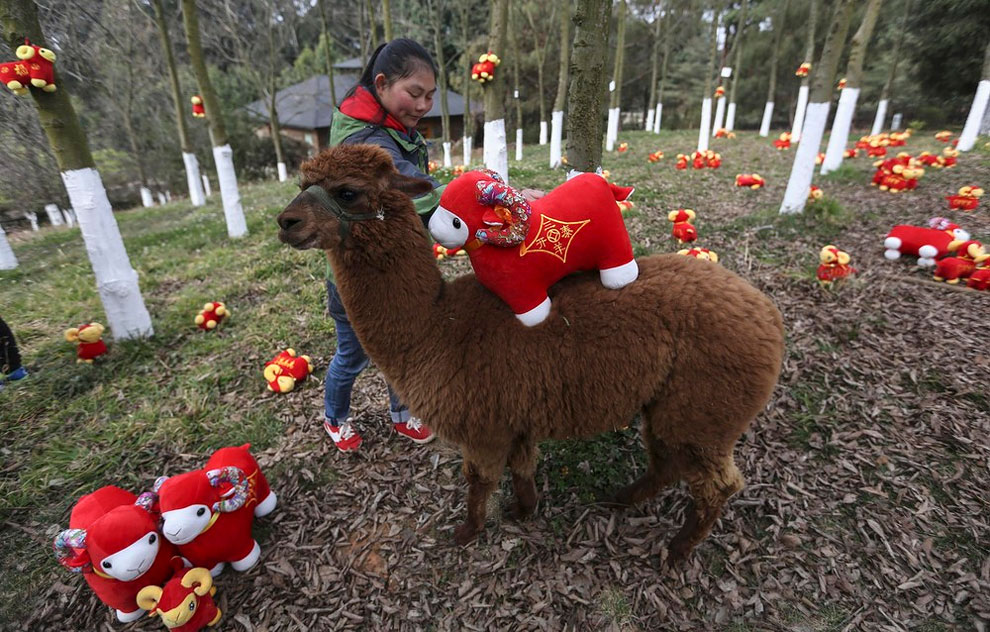 A zookeeper places a goat-shaped doll onto the back of an alpaca during a celebration event for the upcoming Spring Festival, at a wildlife park in Kunming, Yunnan province February 11, 2015. The Chinese Lunar New Year on February 19 will welcome the Year of the Sheep (also known as the Year of the Goat or Ram). (Photo by Wong Campion/Reuters) 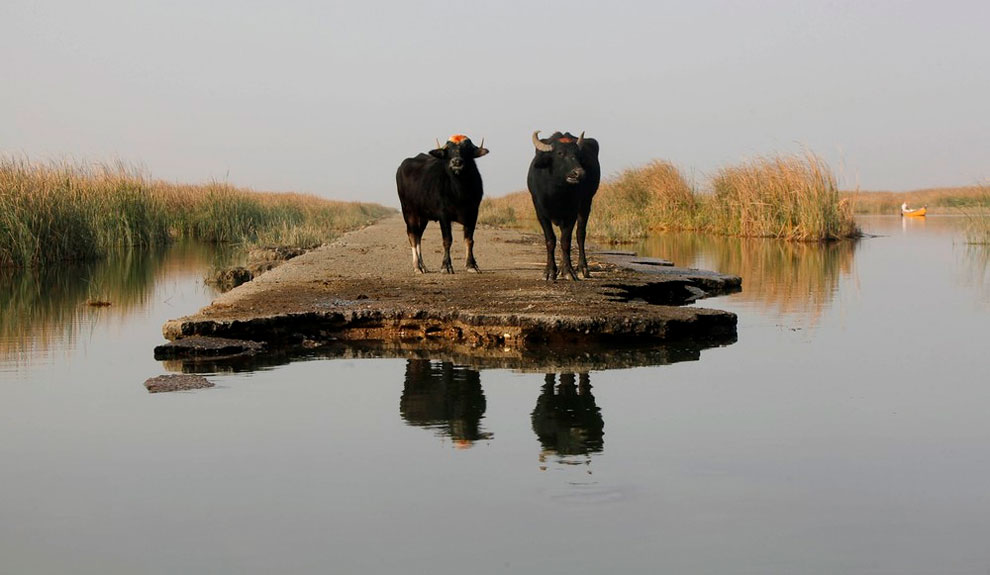 Two buffaloes gather by the waters of the Chebayesh marsh in Nassiriya, southeast of Baghdad, February 11, 2015. (Photo by Alaa Al-Marjani/Reuters) 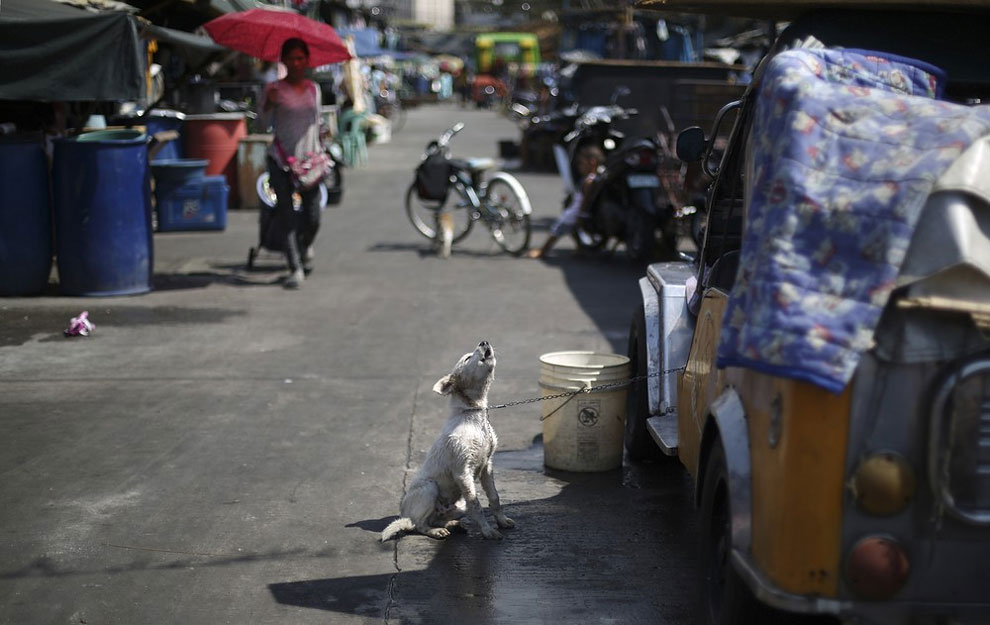 A dog barks as he is chained to a jeep after taking a bath along the road in a poor district of Manila, Philippines Tuesday, February 10, 2015. (Photo by Aaron Favila/AP Photo) 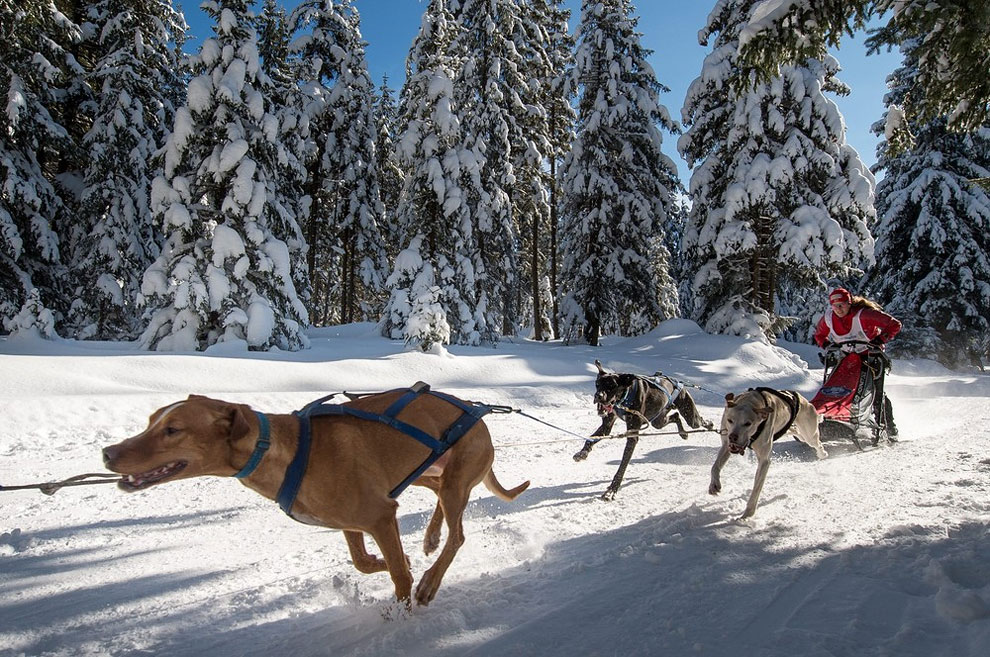 Sled dogs pull their musher Marte Heilemann of Norway during a sled dog race in Szklarska Poreba, Poland, 07 February 2015. About 1,000 sled dogs take part at the Husqvarna Tour 2015 international race. During the three-day competition 100 teams will have to overcome the difficult many kilometers route. (Photo by Maciej Kulczynski/EPA) 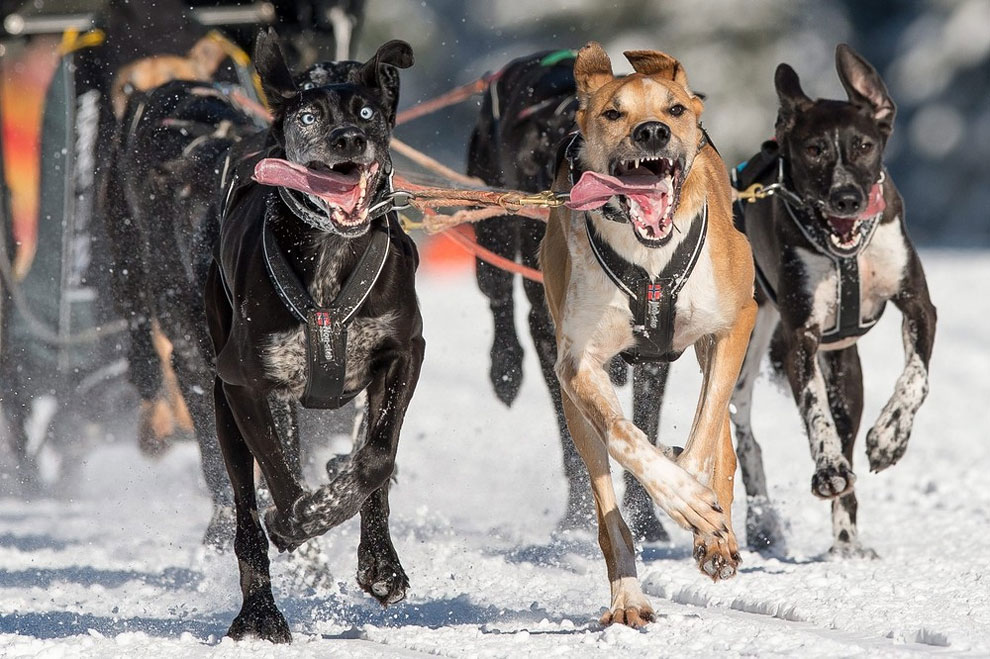 Dogs dash through the snow during a sled dog race in Szklarska Poreba, Poland, 07 February 2015. (Photo by Maciej Kulczynski/EPA) 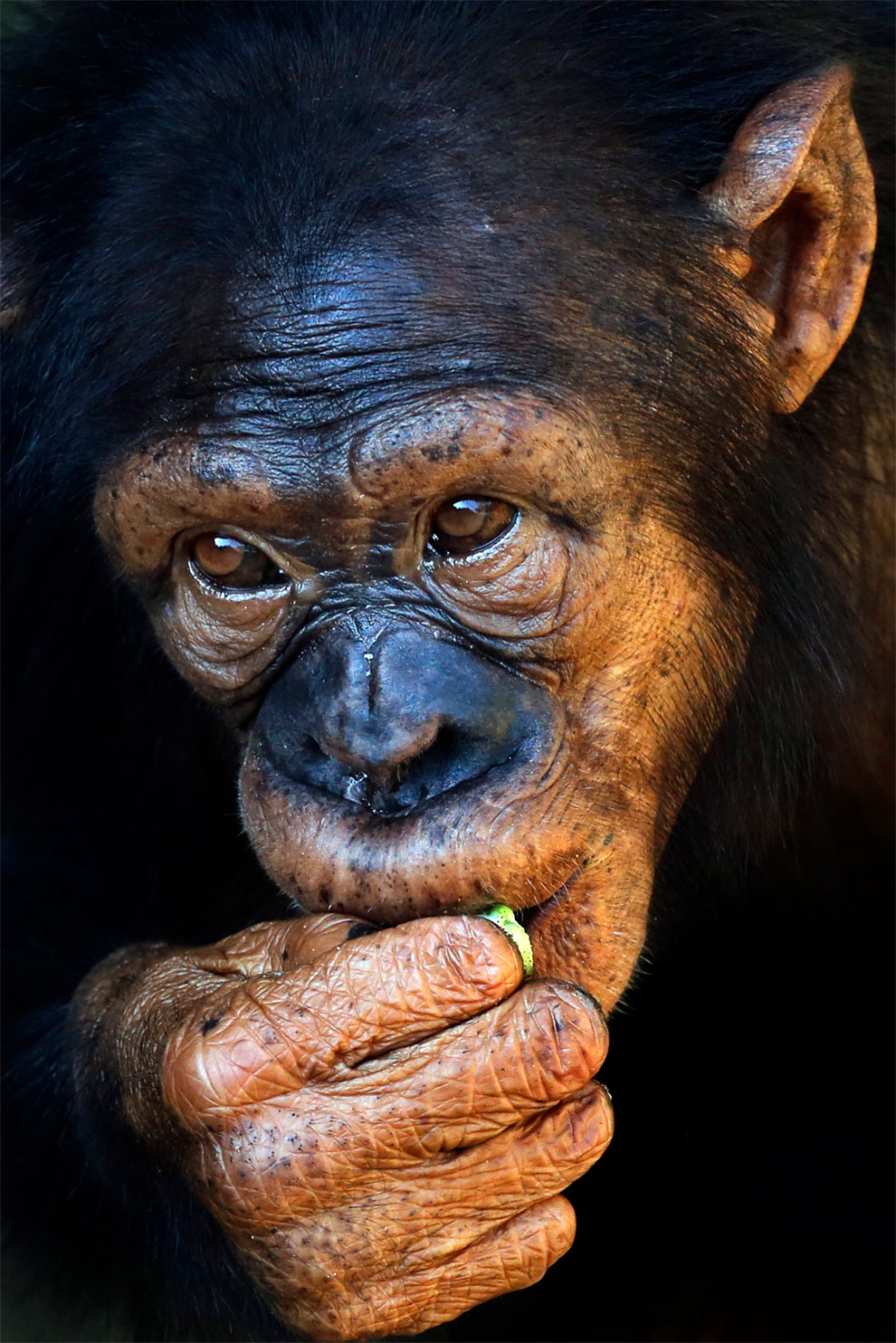 A Chimpanzee (Pan troglodytes) enjoys a bite while watching visitors at Sri Lanka’s National Zoological Gardens at Dehiwala in Colombo, Sri Lanka, 08 February 2015. The Dehiwala National Zoo, one of the oldest in Asia, has a remarkable collection of exotic and indigenous fauna. It is renowned worldwide simply as the Colombo zoo and promotes conservation by breeding certain rare and endangered species through proper animal welfare. Over one and half million local and foreign tourists visit the zoo annually while students from schools and universities visit for educational purposes. (Photo by M. A. Pushpa Kumara/EPA) 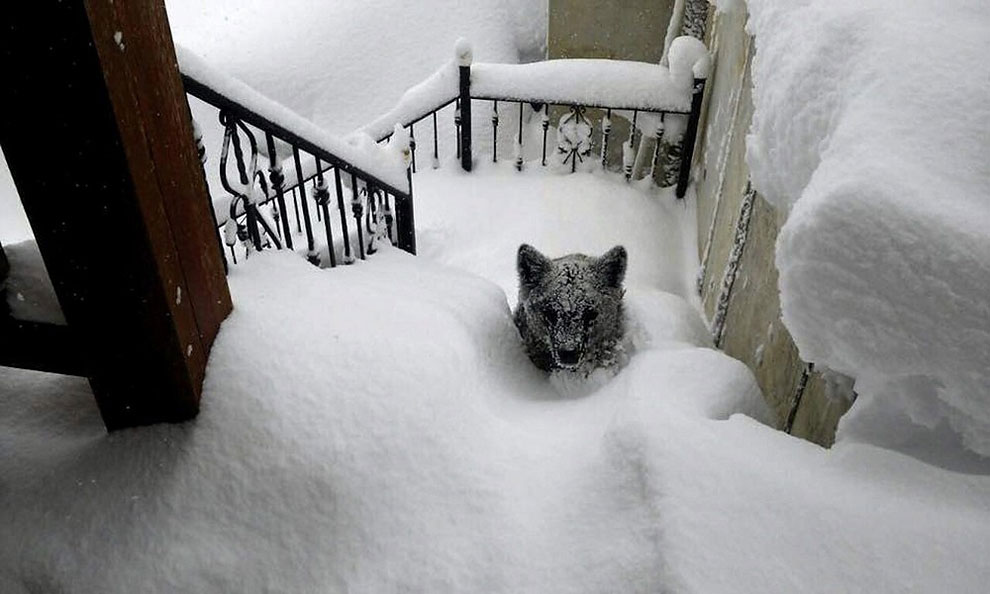 A handout picture dated 08 February 2015 and made available on 09 February by Oscar Montero, an inhabitant of Prioro town in Leon province, central Spain, shows a Cantabrian brown bear cub covered in snow at Montero’s home exterior stairs. The Cantabrian brown bear is catalogued on the Spanish Red List of Endangered Species as “In Danger of Extinction”. The wild animal appeared in front of Montero’s house after the town kept several days isolated by the snow and two and half days without electricity. As Montero explains, at first it was not clear to him what kind of animal it was, he thought it was a big dog, but then he realized that it was a bear cub, quietly climbing the stairs. “My first impulse was to go out and to touch it, but then I did not do it because I was warned that, being a baby, the mother could be close and it could be dangerous. When I was going to make a video with the phone and opened the door of the house, the animal turned and quickly slipped out behind the house”, Oscar says. (Photo by Oscar Montero/EPA) 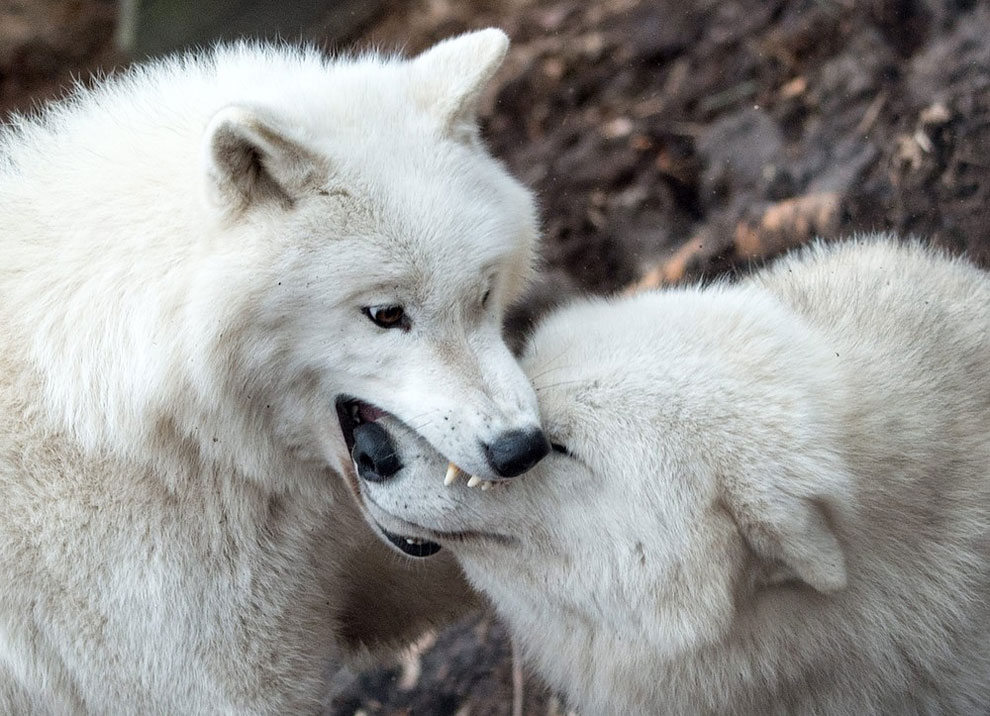 Arctic wolves in their new enclosure in the wildlife park in Hanau, Germany, 10 February 2015. The pack is one of the park’s main attractions, which specializes in local and European breeds. (Photo by Boris Roessler/EPA) 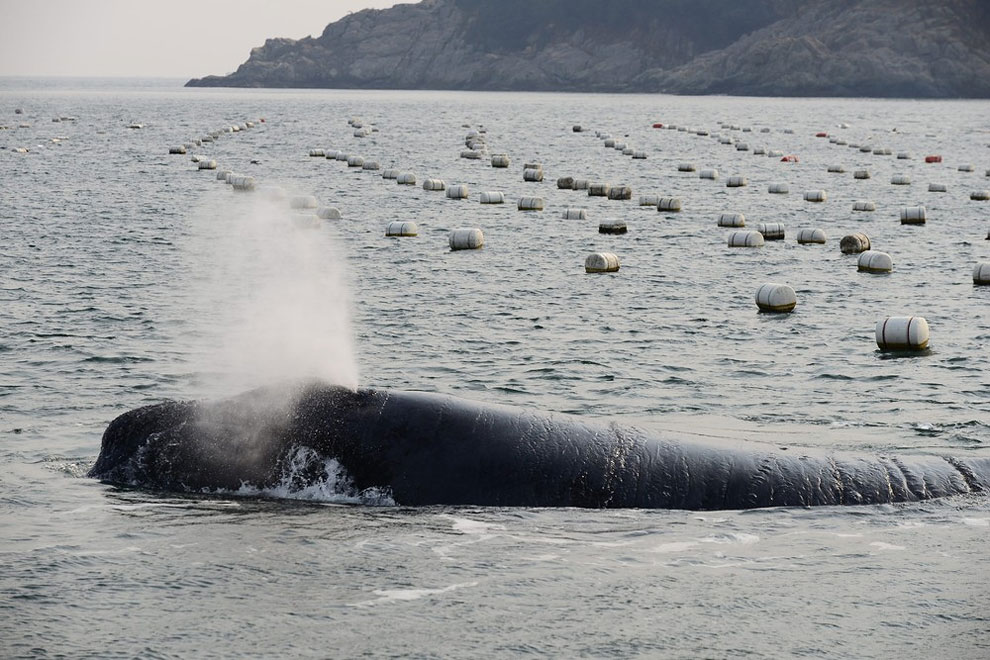 A picture made available on 12 February 2015 shows a North Pacific right whale, a very large and robust baleen whale species that is now extremely rare and endangered, seen in waters off Namhae County, southeast South Korea, 11 February 2015. It is the first time in 41 years that a North Pacific right whale has been spotted in waters around the Korean Peninsula. (Photo by EPA/Yonhap) 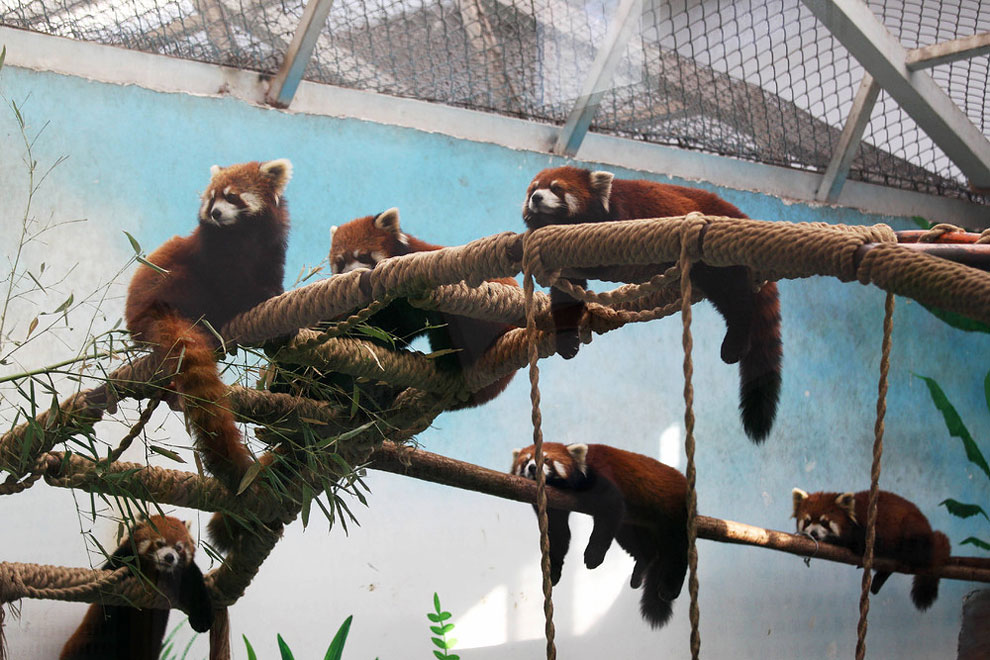 The red pandas are sleeping on shelf in Zhengzhou, Henan, China on 10th February, 2015 (Photo by Top Photo/SIPA Press) 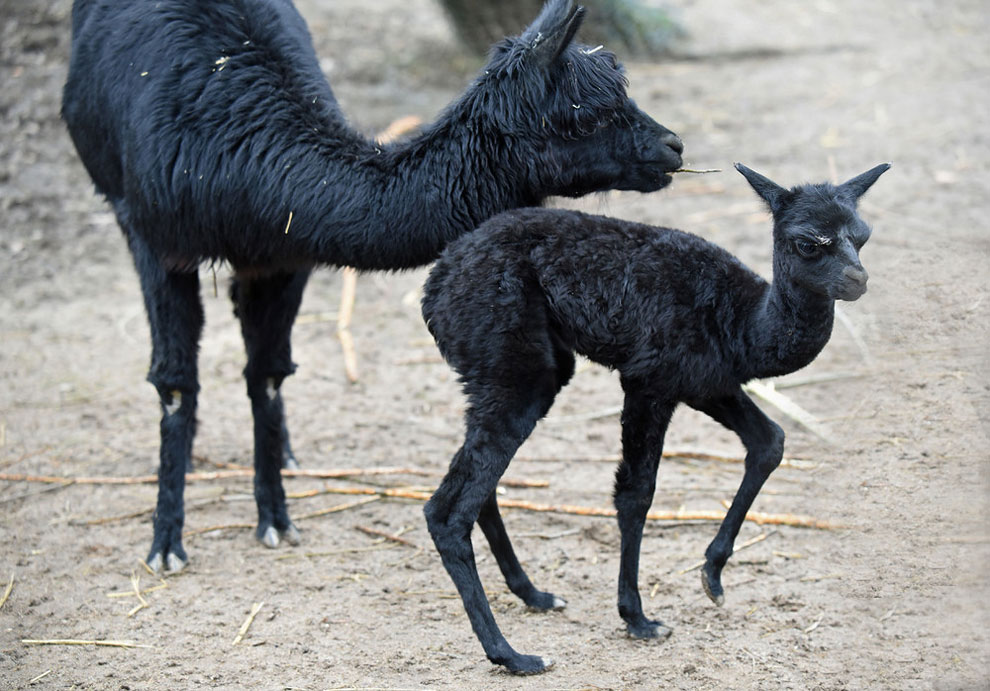 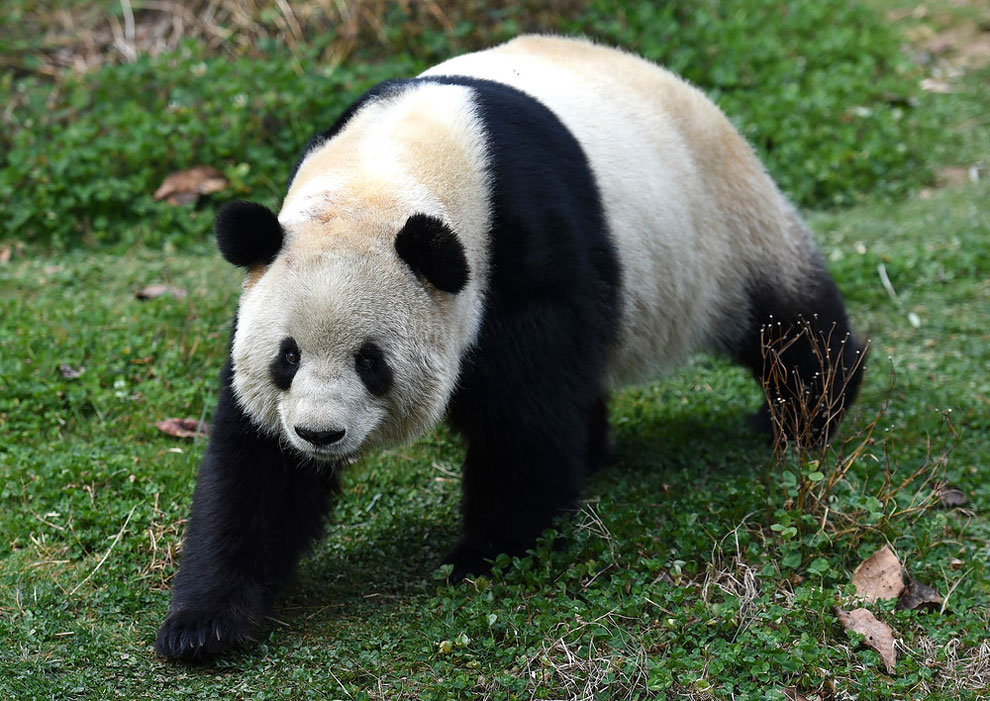 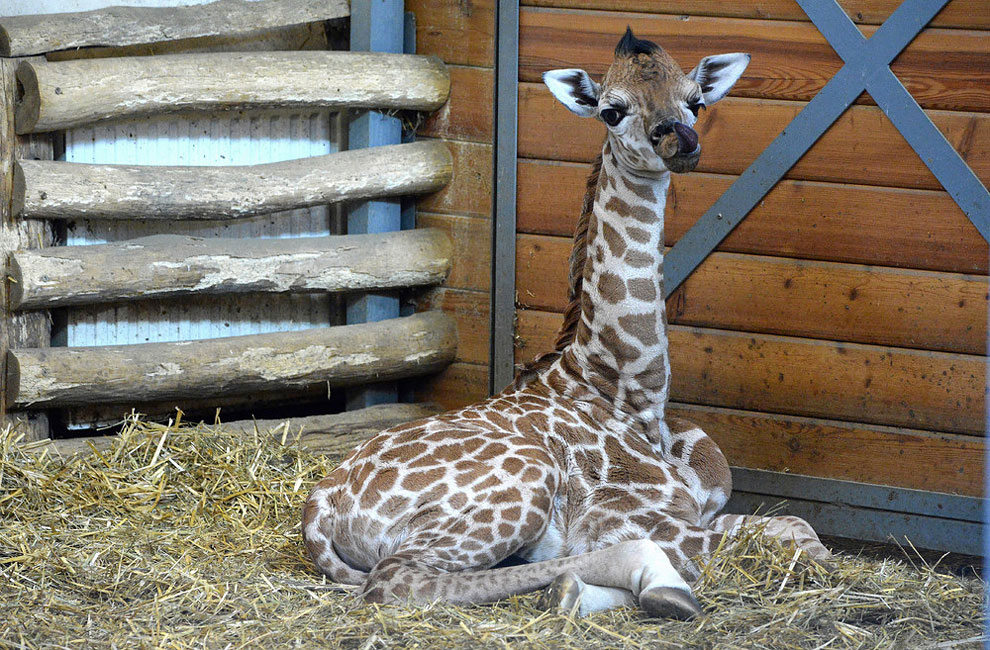 A six-days young baby giraffe Ikinya is pictured at the “Giraffe House” in the Zoo and Botanic Garden of Budapest on February 6, 2015. The new born animal was born on January 31 by his seven-year old mother Ingrid from Prague zoo. (Photo by Attila Kisbenedek/AFP Photo) 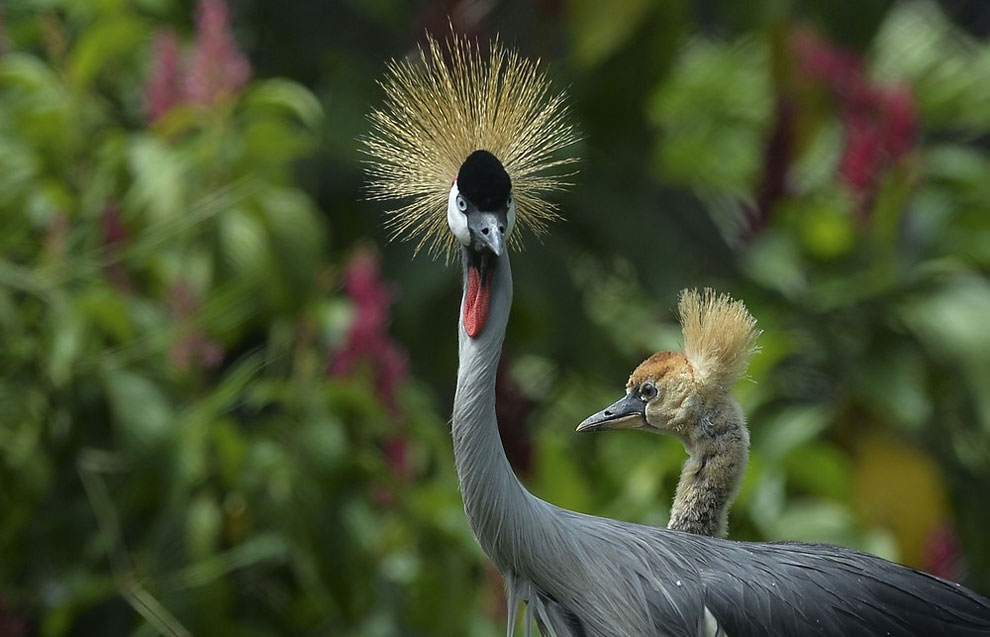 An African gray crowned crane (Balearia regulorum) – an endangered species – and her two-month old baby are seen at the Santa Fe zoo in Medellin, Antioquia department, Colombia on February 10, 2015. The animal was taken from the farm of the late drug lord Pablo Escobar. (Photo by Raul Arboleda/AFP Photo) 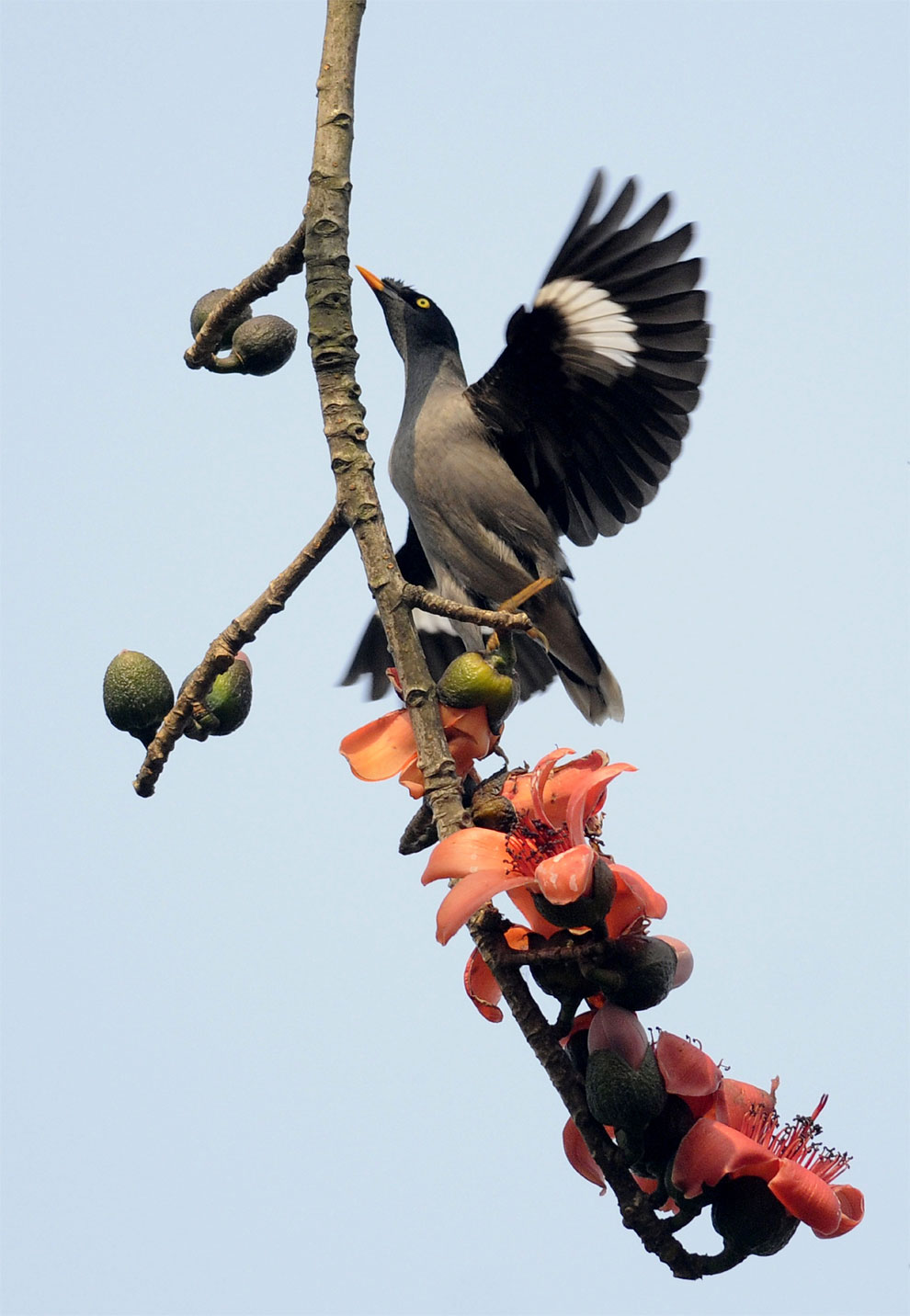 A mynah bird flies among simolu flowers in a tree on the outskirts of Guwahati on February 7, 2015. This seasonal flower attracts a variety of wild birds and honeybees. (Photo by AFP Photo/Stringer) A one-horned rhinoceros is pictured as a controlled burn of grassland is seen at Kaziranga National Park in India’s northeastern Assam state on February 8, 2015. (Photo by AFP Photo/Stringer) 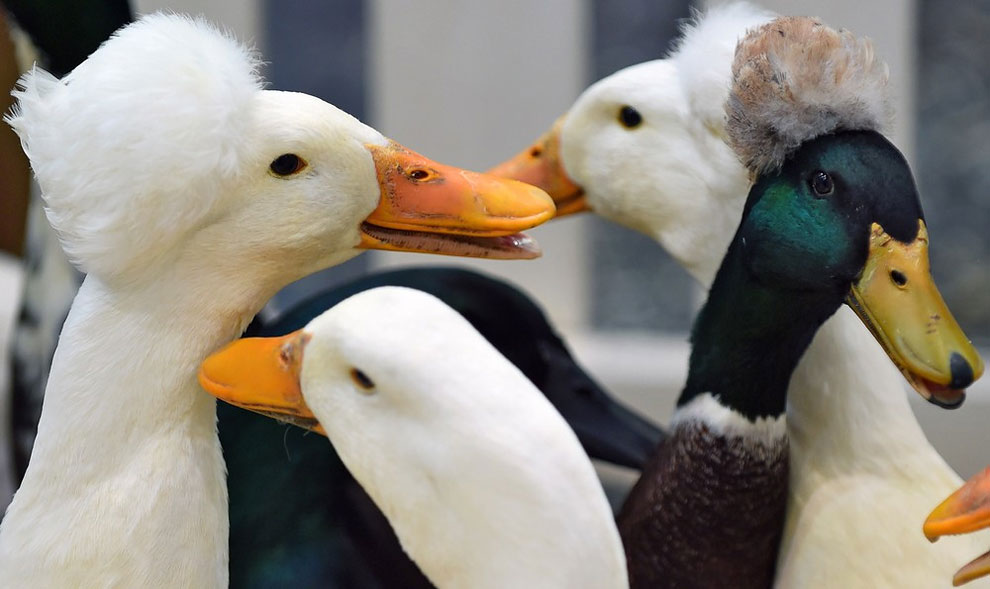 Bonnet ducks are pictured at the Haus-Garten-Freizeit (Home – Garden – Leisure) fair in Leipzig, eastern Germany, on February 7, 2015. Around 870 exhibitors from 19 countries take part in the consumer fair running from February 7 to 15, 2015. (Photo by Hendrik Schmidt/AFP Photo/DPA) 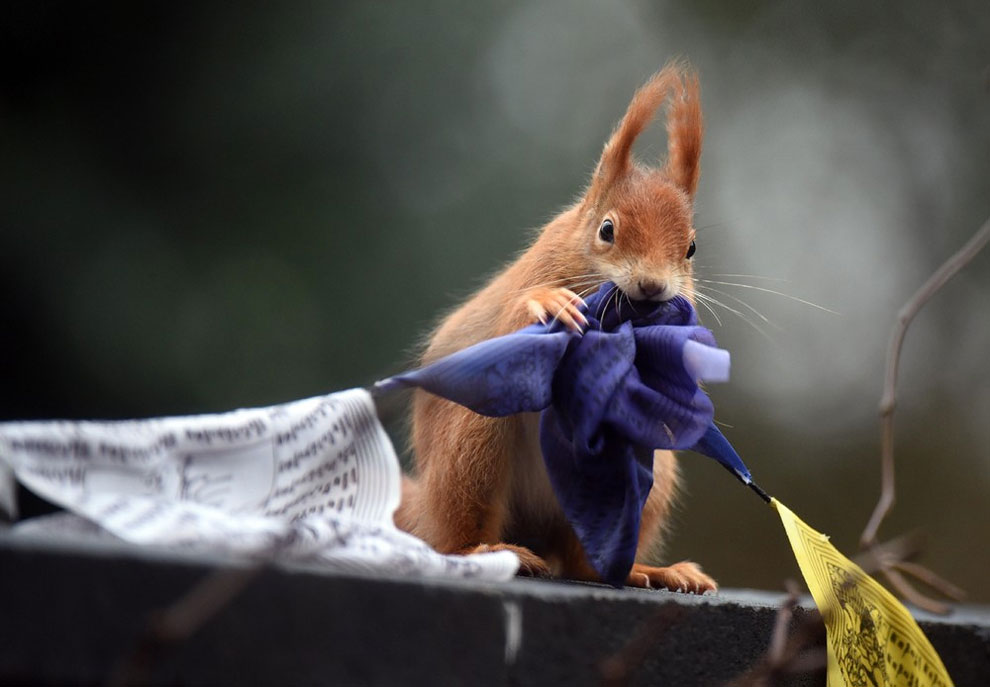 A squirrel chews on a Tibetan Prayer flag in Cologne, western Germany, on February 8, 2015. (Photo by Henning Kaiser/AFP Photo/DPA) 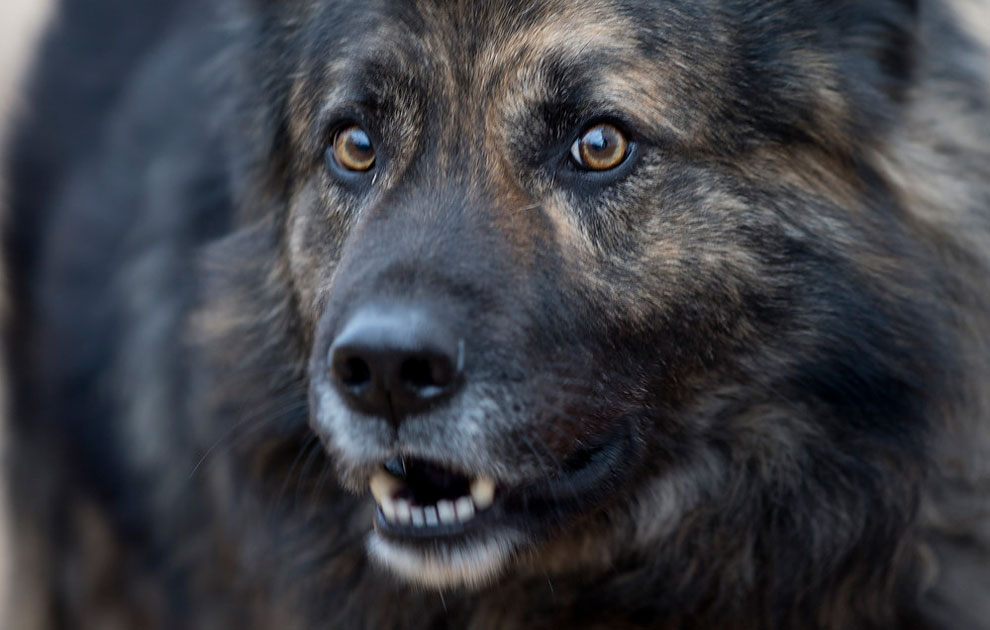 Dog Medo barks in a backyard in Peroj, Croatia, Monday, February 9, 2015. A fed up neighbor from a northern Croatian Adriatic village has won a temporary court order that says Medo must stop barking at night. If not, owner Anton Simunovic must pay some €2,800 ($3,160). The 3-year-old mutt, now confined in a barn between 8 p.m. and 8 a.m. instead of being allowed to roam, is the only dog in Croatia slapped with a no-barking injunction. (Photo by Darko Bandic/AP Photo) 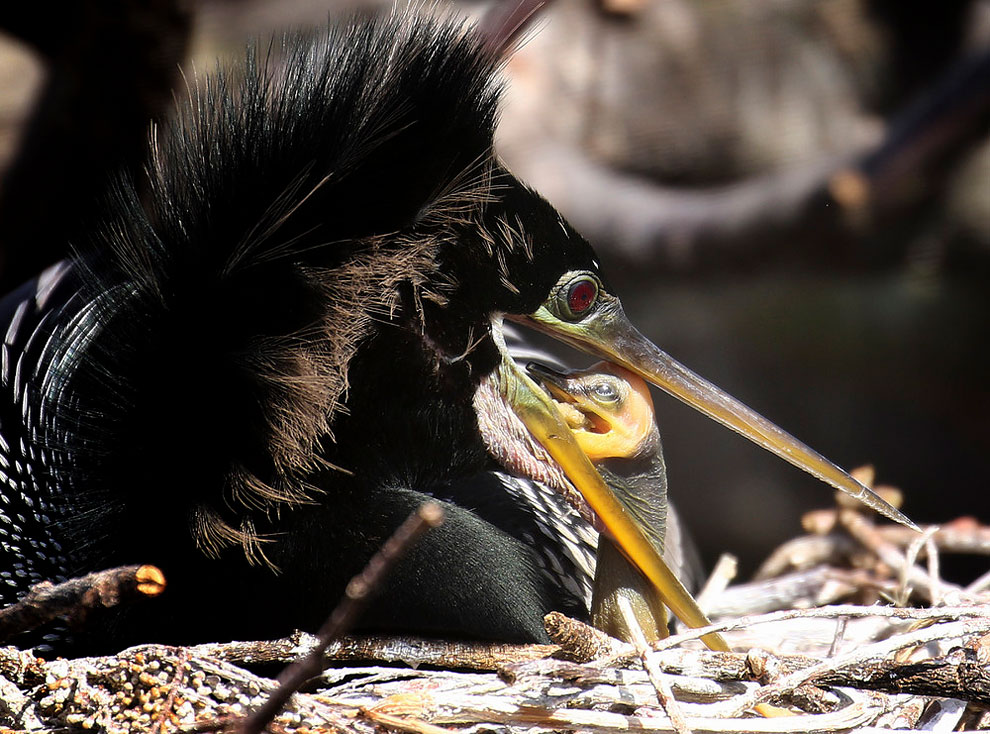 An infant anhinga reaches inside an adult bird’s mouth to feed, Tuesday, February 10, 2015, at the Wakodahatchee Wetlands in Delray Beach, Fla. It is nesting season for migrant birds. (Photo by J. Pat Carter/AP Photo) 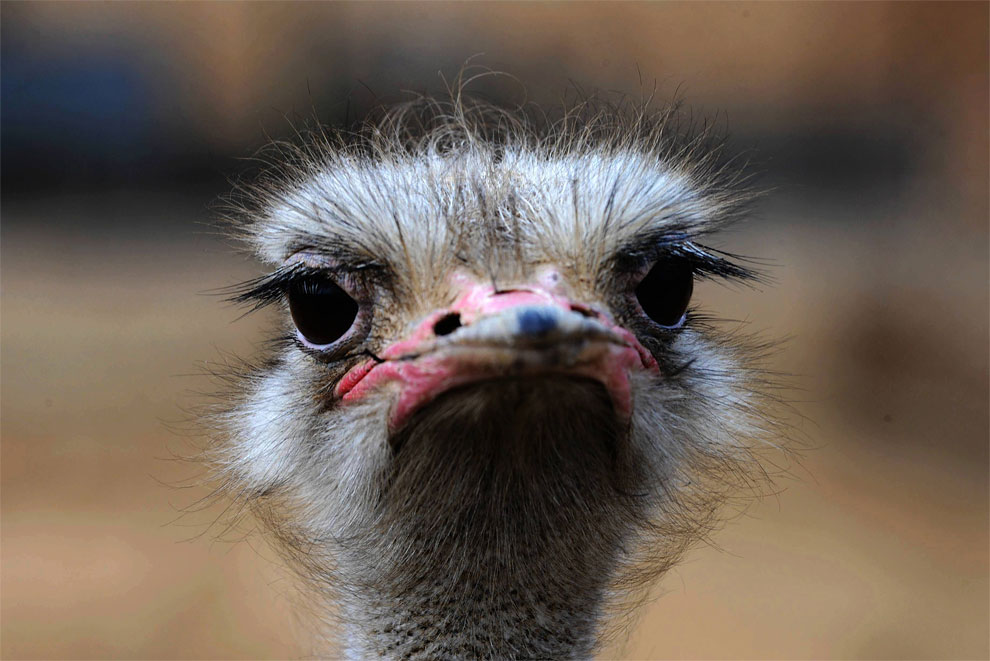 This picture taken on February 8, 2015 shows an ostrich inside an enclosure at Qingdao forest wildlife world in Qingdao, east China’s Shandong province. (Photo by AFP Photo/Stringer) 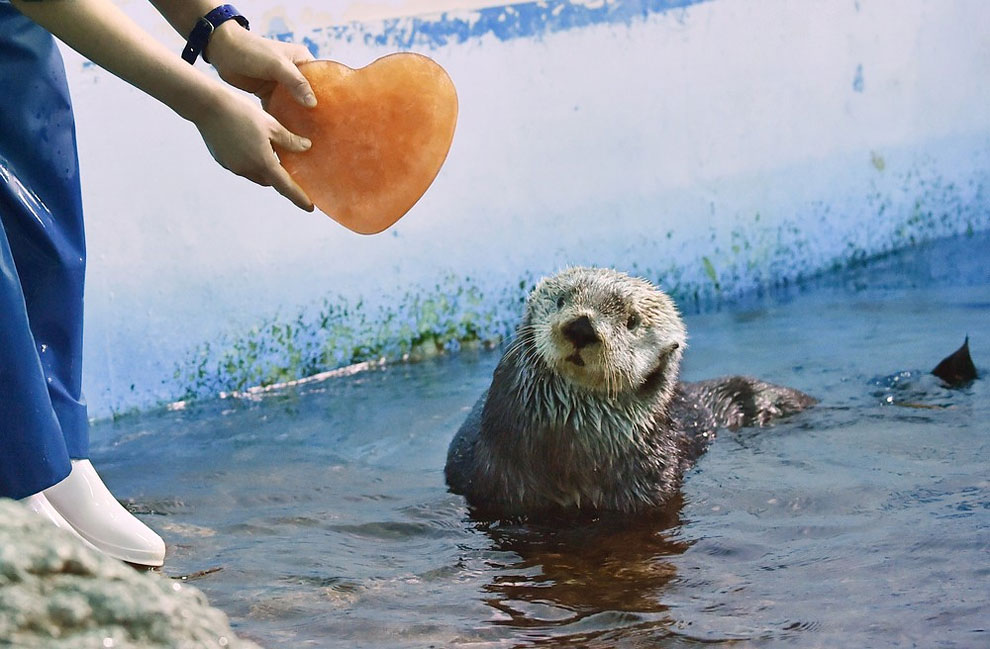 An Alaskan sea otter is given a heart-shaped block of ice, presented by his keeper, inside its enclosure in the aquarium of an amusement park in Yokohama on February 11, 2015. The event takes place once a day for park visitors until February 15 in celebration of Valentine’s Day on February 14. (Photo by Kazuhiro Nogi/AFP Photo) 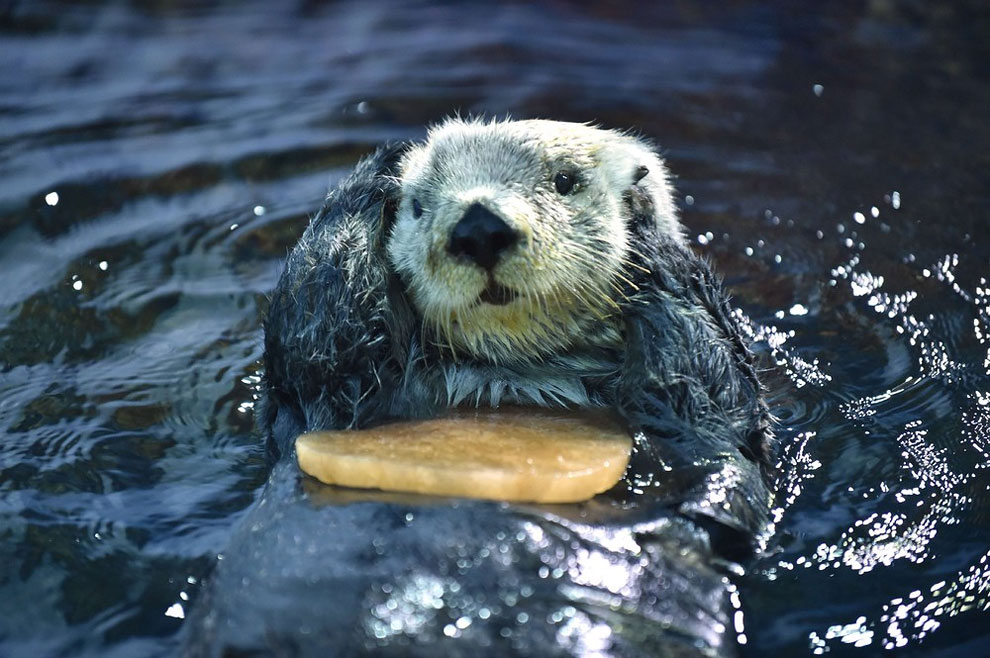 An Alaskan sea otter swims holding a heart-shaped block of ice, presented by his keeper in the aquarium of an amusement park in Yokohama on February 11, 2015. (Photo by Kazuhiro Nogi/AFP Photo) 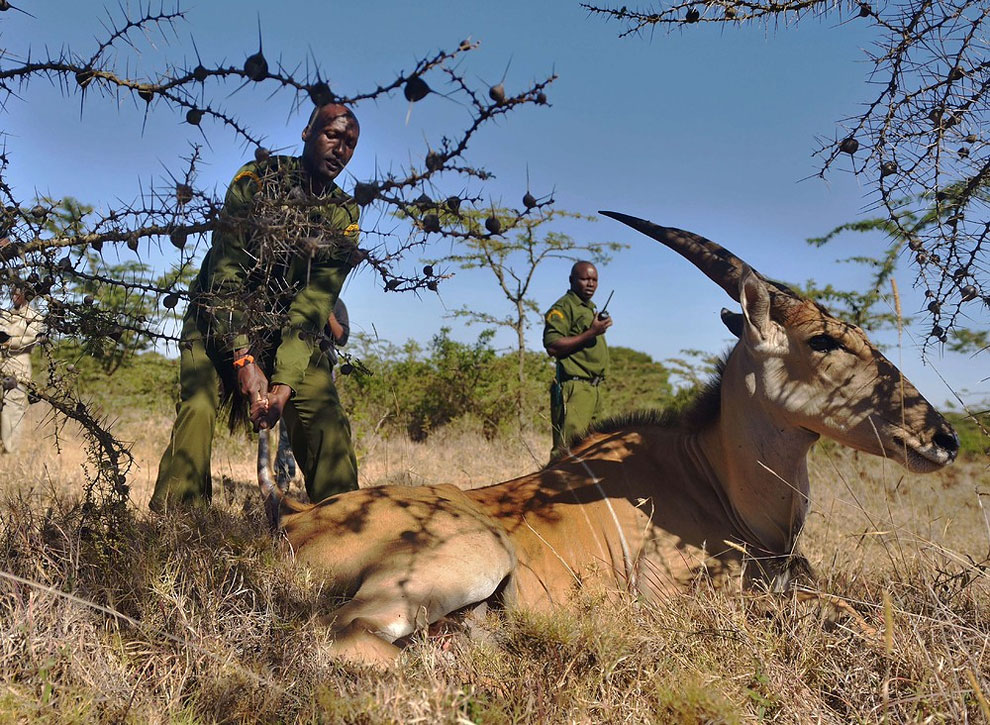 Game rangers from the Ol Pejeta Conservancy try to encourage a distressed female Eland antelope to stand up after it was freed from an illegal snare on February 6, 2015, in the community owned lands bordering the conservancy during a drive to push wild game from human-populated areas back into the wilds of Ol-Pejeta, in a bid to curb increasing incidences of human-wildlife conflict. The Ol-Pejeta Conservancy, is a 90,000-acre not-for-profit wildlife conservancy in the Laikipia district of central Kenya. (Photo by Tony Karumba/AFP Photo) 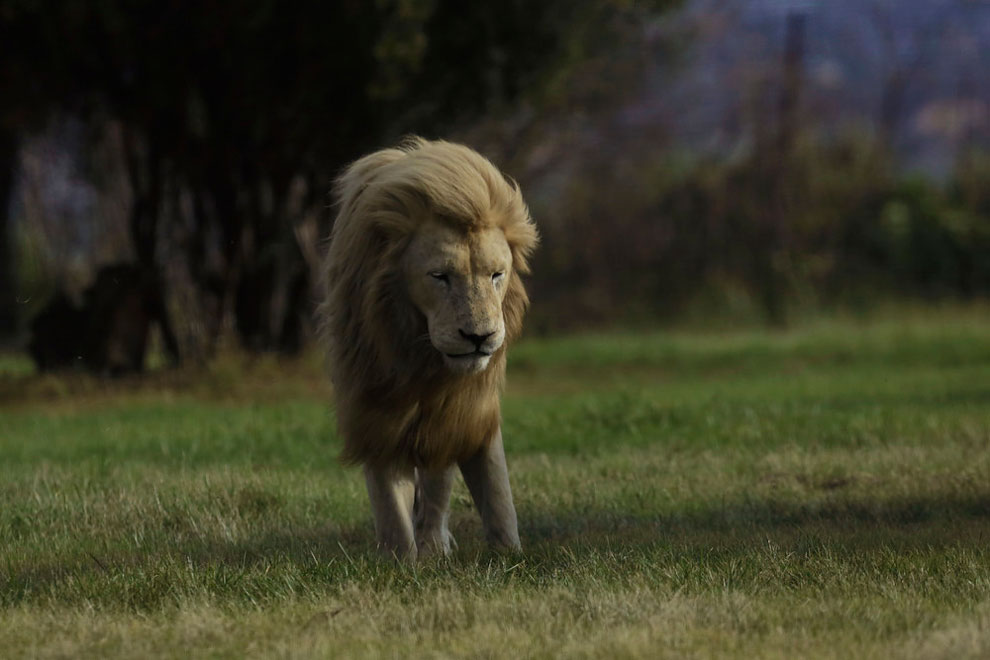 A male lion stands in the breeze at the Lion Park outside Johannesburg, South Africa, Wednesday February 4, 2015. (Photo by Jerome Delay/AP Photo) 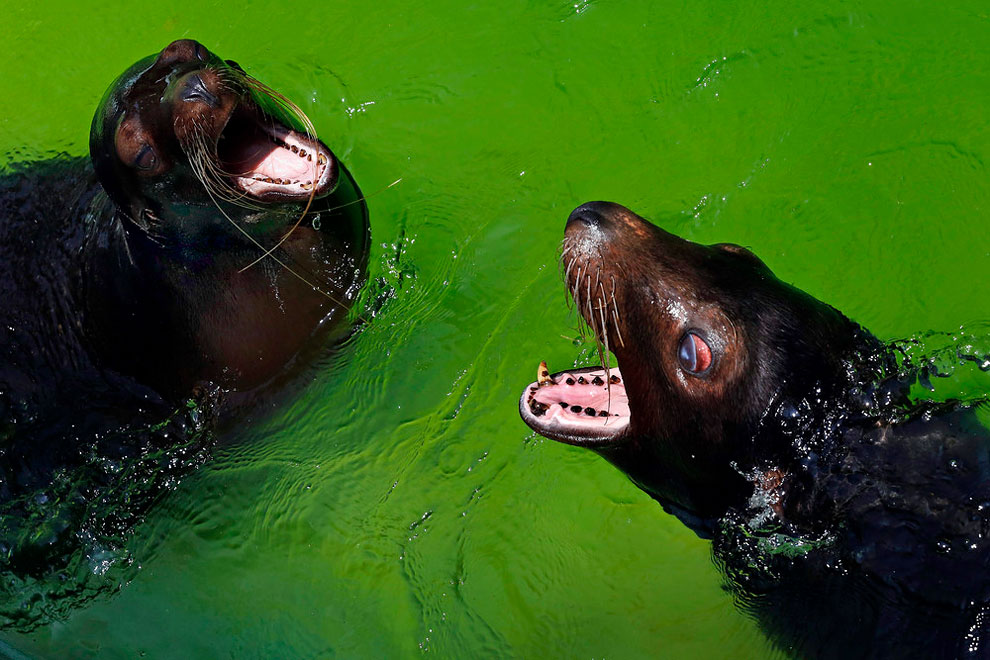 A sea lion (Zalophus californianus) couple basking in the sun at Sri Lanka’s National Zoological Gardens at Dehiwala in Colombo, Sri Lanka, 08 February 2015. The Dehiwala National Zoo, one of the oldest in Asia, has a remarkable collection of exotic and indigenous fauna. It is renowned worldwide simply as the Colombo zoo and promotes conservation by breeding certain rare and endangered species through proper animal welfare. Over one and half million local and foreign tourists visit the zoo annually while students from schools and universities visit for educational purposes. (Photo by M. A. Pushpa Kumara/EPA)

Beautiful Photos Of Mali The Dog Enjoying Christmas Time
"Cat Selfies": An Amusing Collection Of Cats Taking "Selfies"
This Fuffy Cat Has A Better Life Than All Of Us
Hilarious Pictures from the Comedy Wildlife Photography Awards
This Japanese Company Found The Most "Prefurrable" Way To Improve Productivity
January 31 – February 6, 2015: Animals
15 Pictures of Nature That Are One Big NOPE
A Portrait Of Lost Habitats In Africa
December 20 – 27, 2014: Animals
These Pics Are Composed Of As Many Pixels As There Are Animals Still Alive In These Species
Photographer Set Out To Capture The Personalities Of Animals Who Adapt To Their Damaged Or Different Bodies Without Complaint
This Soviet Dog Spacesuit Is The Cutest Dog Costume You Will See Today
Adorably Studious Cat is Adopted by a High School, Issued His Own ID Card
The Running of the Wieners - the Hophaus Southgate Inaugural Best Dressed Dachshund
Photographer Peter Thorne Captures Adorable Photos Of Toronto’s Chubby Cats
Fish Trapped Inside A Jellyfish Captured In A One In A Million Shot
Family Gets A New Pet After Emu Egg Hatches
Cat Owner Sabine Fallend Photographs Her Eyeless Cat Who Sees With His Heart
The Elephant That Was Injured By A Landmine Gets Her New Artificial Leg
Rescued Dog Loses 35 Pounds Of Hair After Getting Its First Haircut In 6 Years
Artist Creates Adorable Cloaks That Will Turn Your Pet Into A Game Of Thrones Character
Today Wouldn’t Be Complete Without Marvelling At This Gorgeous Ginger Cat
This Dog Has A Wheelchair Made Out Of Children’s Toys
Vancouver Cops, Four-Legged Pals Pose For 2019 Police Dog Charity Calendar
Cockatoos by Leila Jeffreys
'Biggest Dinosaur Ever' Discovered
McDonalds Opens A Tiny Restaurant For Bees
The Quiet Of The Coronavirus Lockdown In Israel Has Cleared The Way For Packs Of Jackals To Take Over Park In The Heart Of Tel Aviv
The Man Who Tried To Live As A Goat
This Cat and Dog Duo Love Travelling Together And They Take The Best Pictures
animals, february