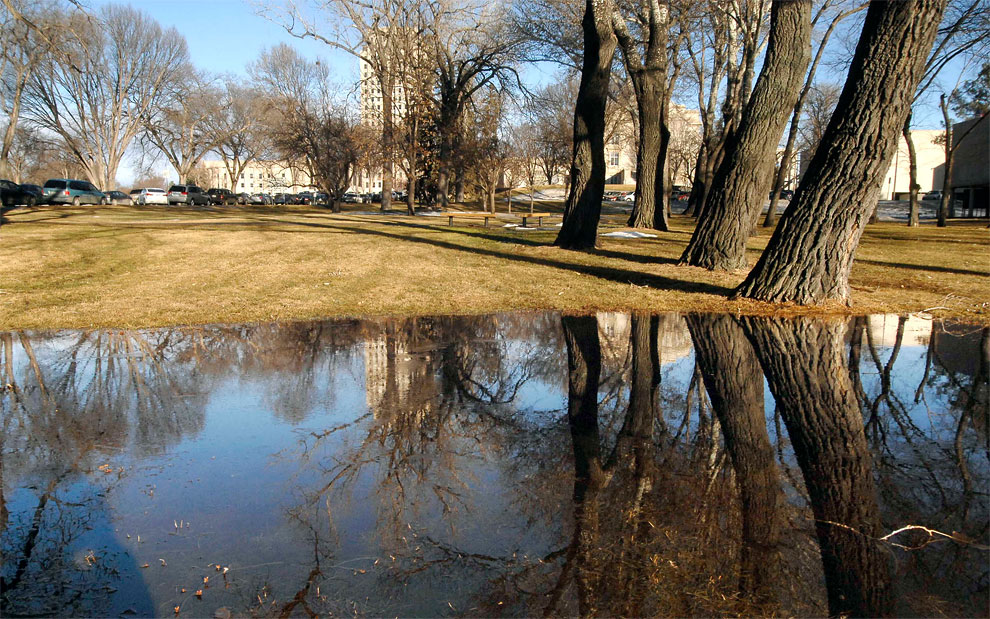 In this January 26, 2015 photo, melted snow collects in a low-lying area near the State Capitol in Bismarck. As a blizzard slams the Northeast, the Northern Plains are seeing record-warm temperatures for the middle of winter. Colder temperatures are expected to return soon. (Photo by Mike McCleary/AP Photo) 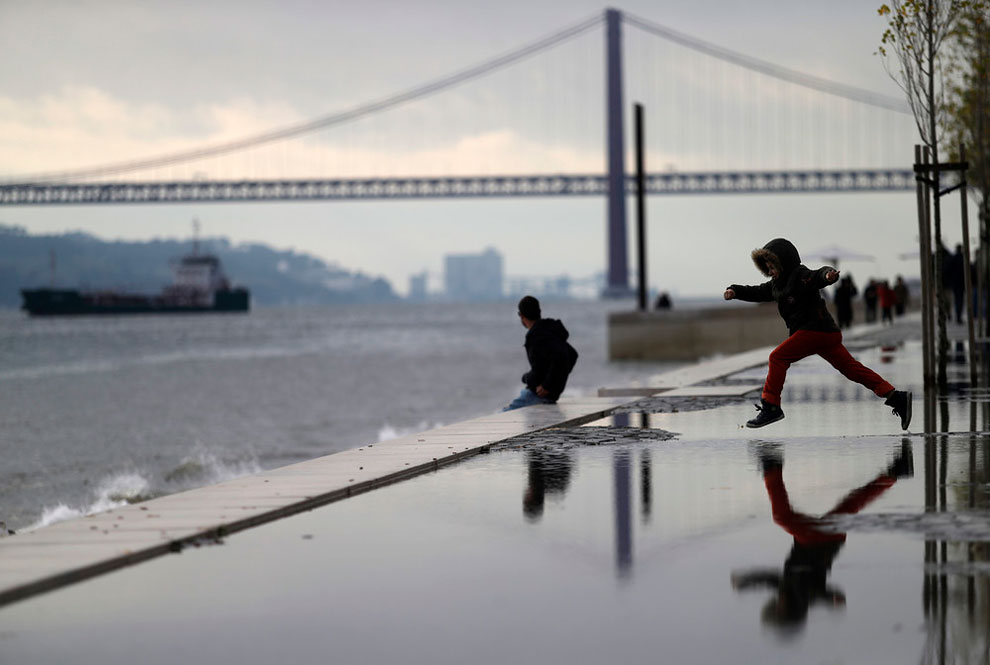 A young boy jumps over a puddle by the Tagus riverbank, in Lisbon, Sunday, January 18, 2015. At the background is the April 25th bridge, whose name was given after the Carnations revolution that restored the democracy in Portugal in April 1974. (Photo by Francisco Seco/AP Photo) 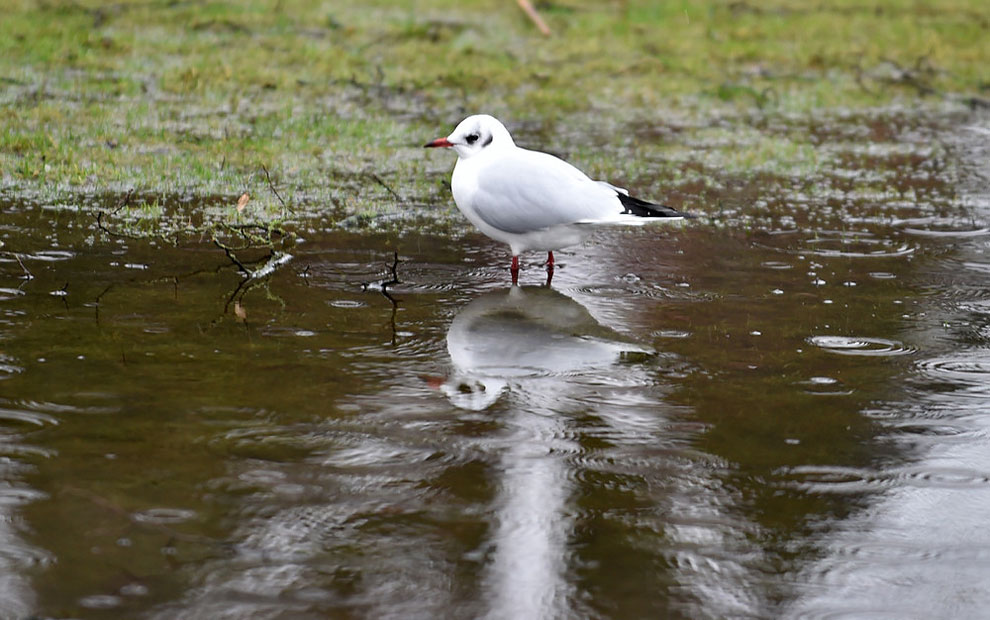 A seagull is mirrored in a puddle on a meadow in Bad Zwischenahn, northern Germany, Sunday January 18, 2015. Weather forecasts predict changeable weather for Germany. (Photo by Carmen Jaspersen/AP Photo/DPA) 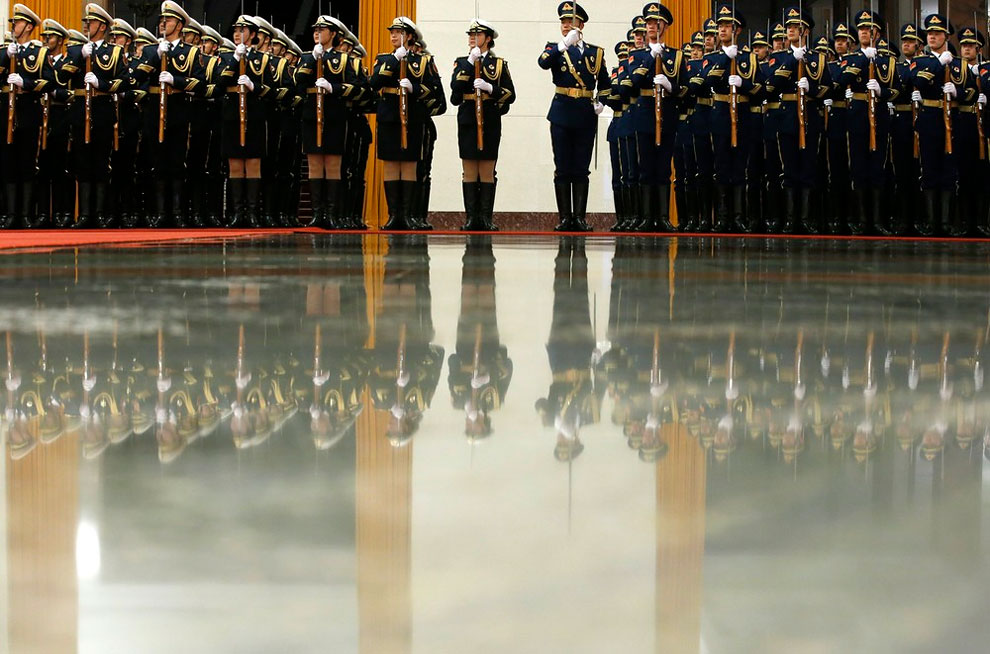 China’s honour guards are reflected on the floor as they rehearse prior to a welcoming ceremony for Thailand’s Prime Minister Prayuth Chan-ocha and China’s Premier Li Keqiang inside the Great Hall of the People in Beijing December 22, 2014. (Photo by Kim Kyung-Hoon/Reuters) 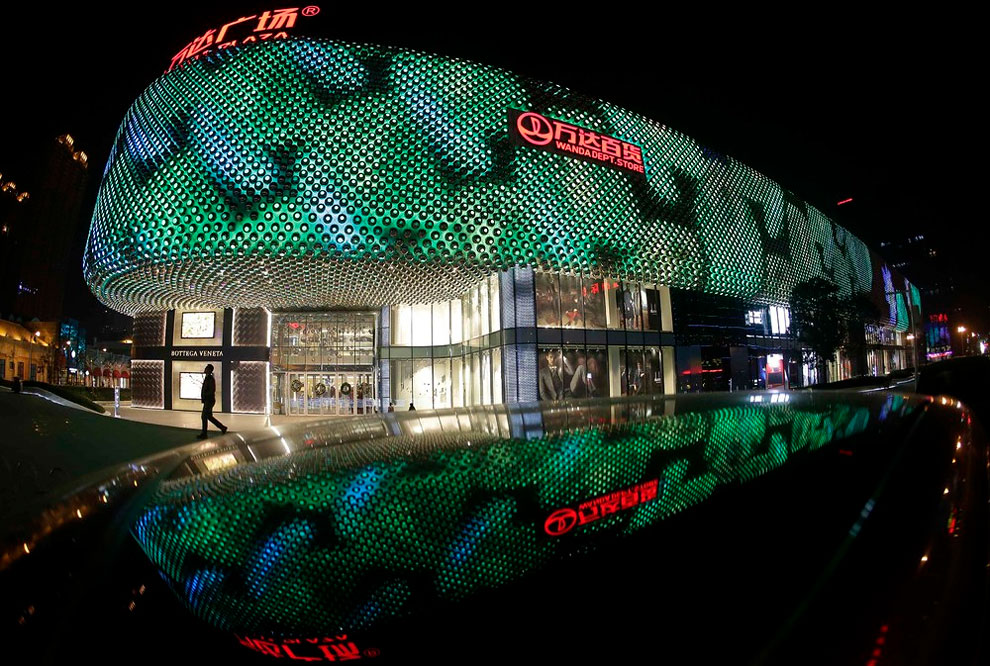 A man walks in front of an entrance to a Wanda Department Store in Wuhan, Hubei province December 23, 2014. The reflection is off the top of a car. (Photo by Reuters/Stringer) 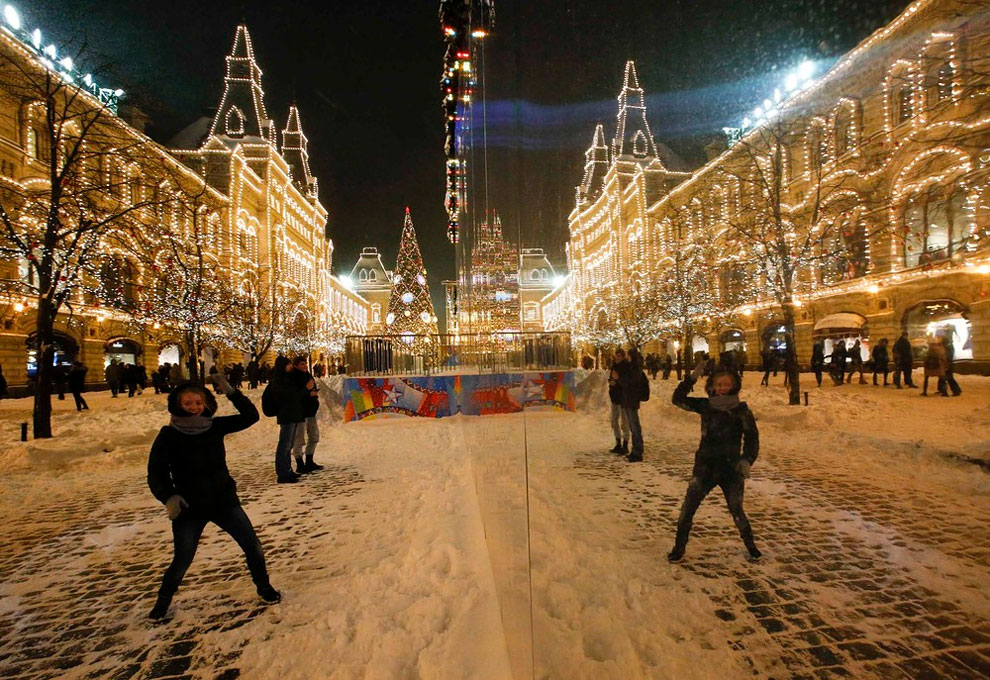 A woman reacts after a heavy snowfall in central Moscow, December 25, 2014. (Photo by Sergei Karpukhin/Reuters) 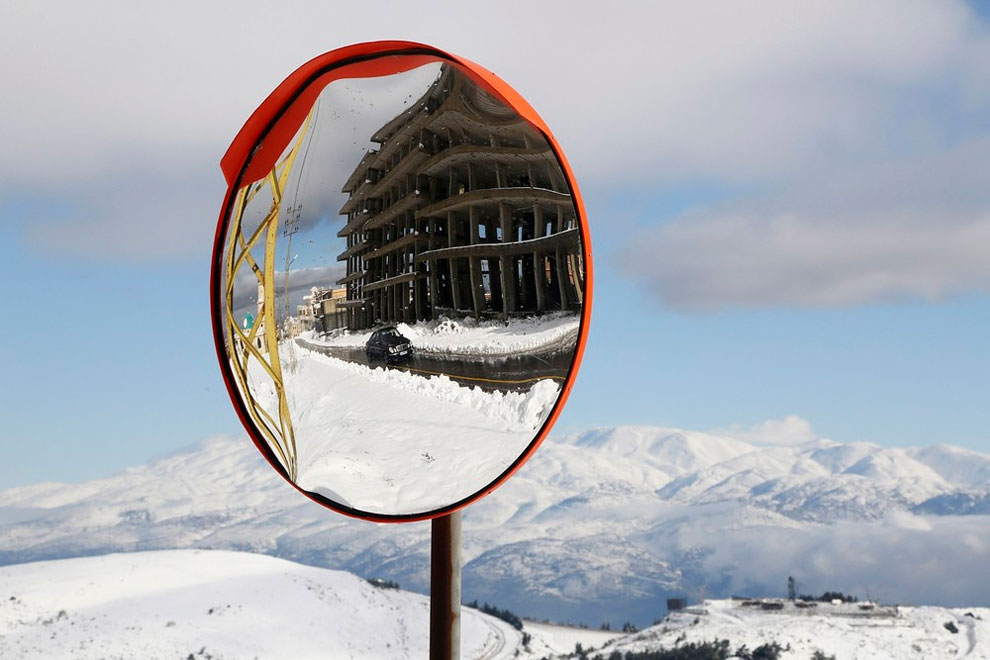 A mirror reflects a driving car amid snow in Martaba village near the Lebanese-Israeli border, in south Lebanon January 11, 2015. (Photo by Aziz Taher/Reuters) 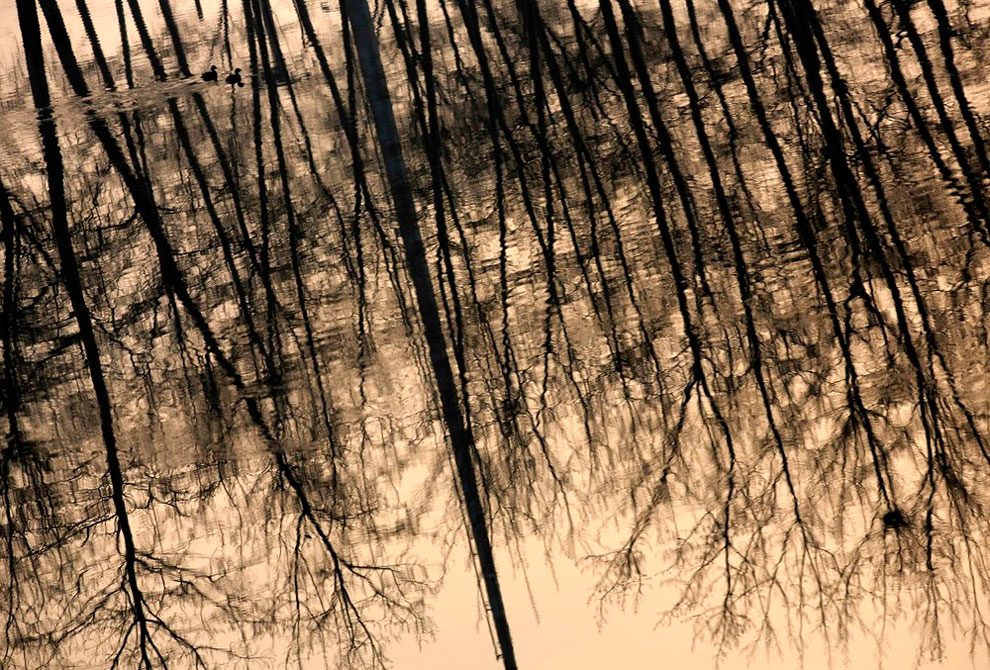 Waterbirds swim in a canal bearing the reflection of trees in Beijing January 13, 2015. (Photo by Kim Kyung-Hoon/Reuters) 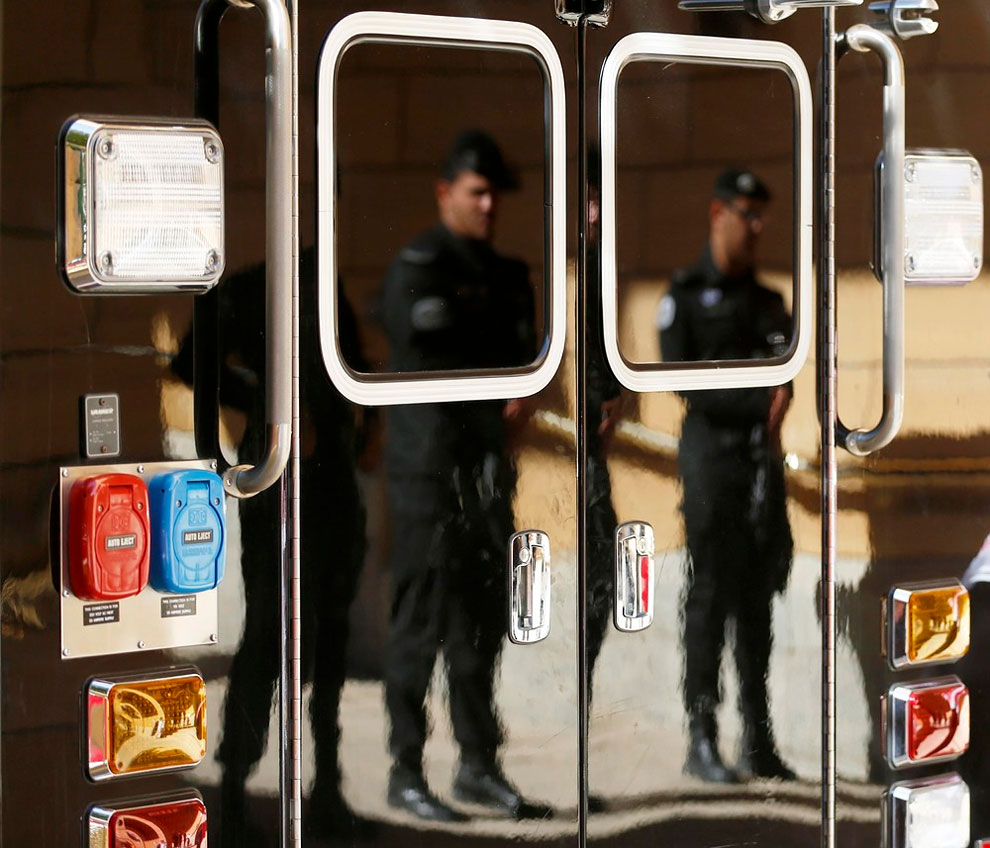 The reflection of Special Forces personnel guarding the ambulance carrying the body of Saudi King Abdullah is seen on the doors of the vehicle during funeral prayers at Imam Turky bin Abdulla Grand Musque in Riyadh January 23, 2015. Saudia Arabia’s new King Salman pledged continuity in energy and foreign policies on Friday and moved quickly to appoint younger men as his heirs, settling the succession for years to come by naming a deputy crown prince from his dynasty’s next generation. King Abdullah, who died early on Friday after a short illness, was buried in an unmarked grave in keeping with local religious traditions. (Photo by Faisal Al Nasser/Reuters) 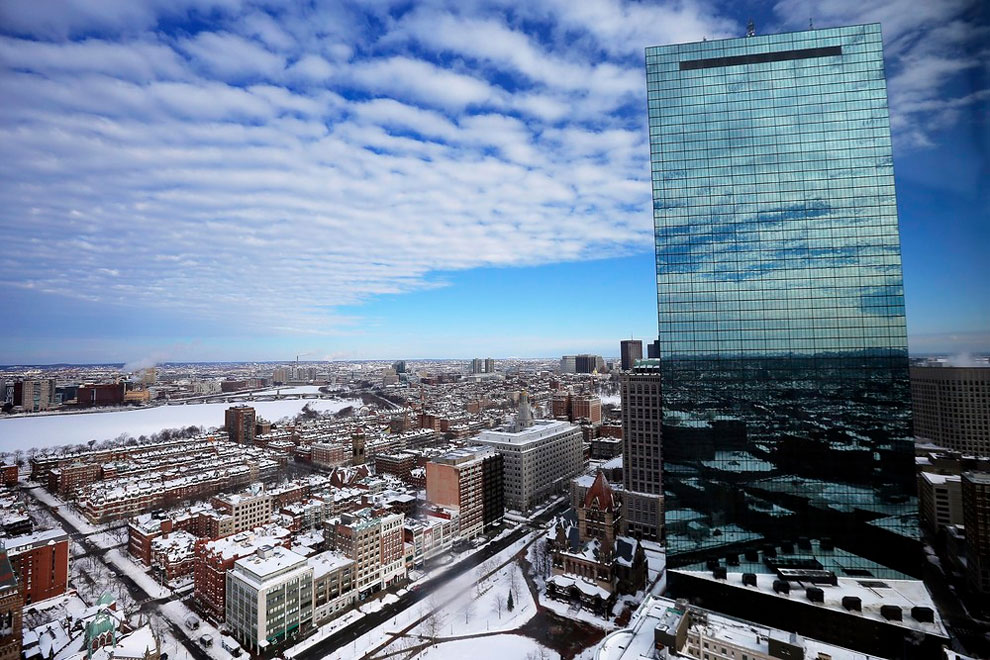 Snow covers roofs, streets and the Charles River following a winter blizzard in Boston, Massachusetts January 28, 2015. A powerful blizzard struck Boston and surrounding New England on Tuesday, leaving some 4.5 million people grappling with as much as three feet of snow and coastal flooding. (Photo by Brian Snyder/Reuters) 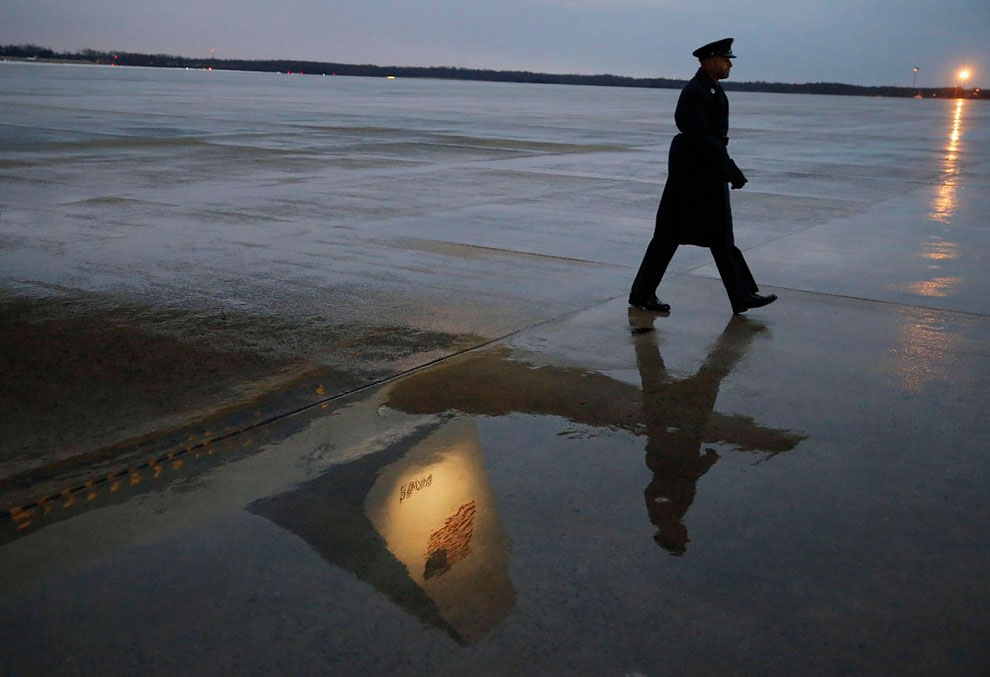 The tail section of Air Force One is reflected in the wet pavement as a USAF Security Forces member walks to his position before U.S. President Barack Obama arrives at Andrews Air Force Base outside Washington, January 29, 2015. Obama is departing for Philadelphia and is scheduled to return later this evening. (Photo by Larry Downing/Reuters) 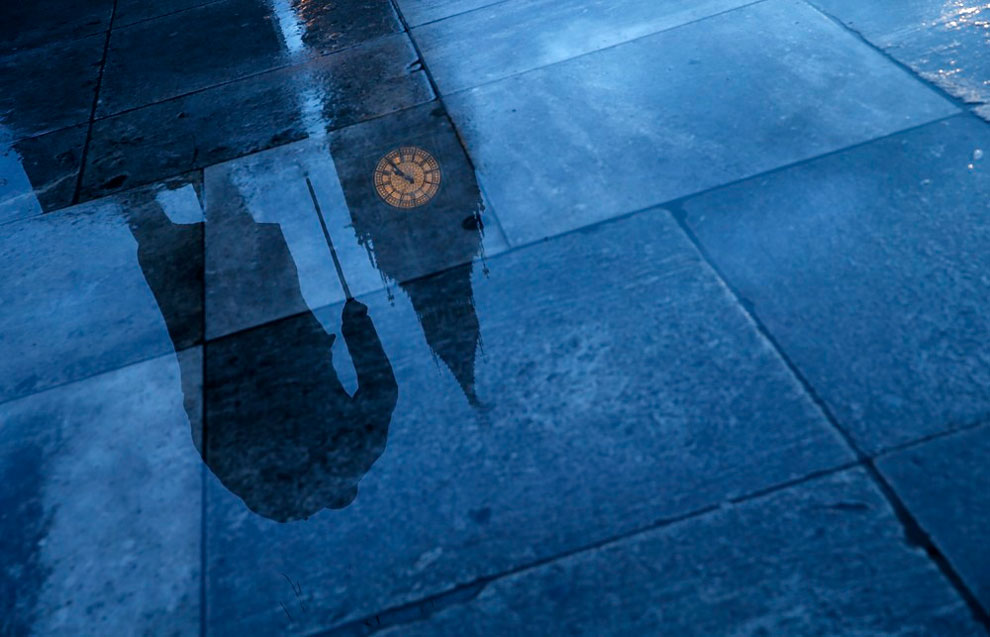 The statue of Britain’s former Prime Minister Winston Churchill is reflected onto the rain covered pavement in front of the Houses of Parliament in London, January 30, 2015. Today marks the 50th anniversary of the funeral of Churchill, Britain’s wartime leader. (Photo by Eddie Keogh/Reuters) 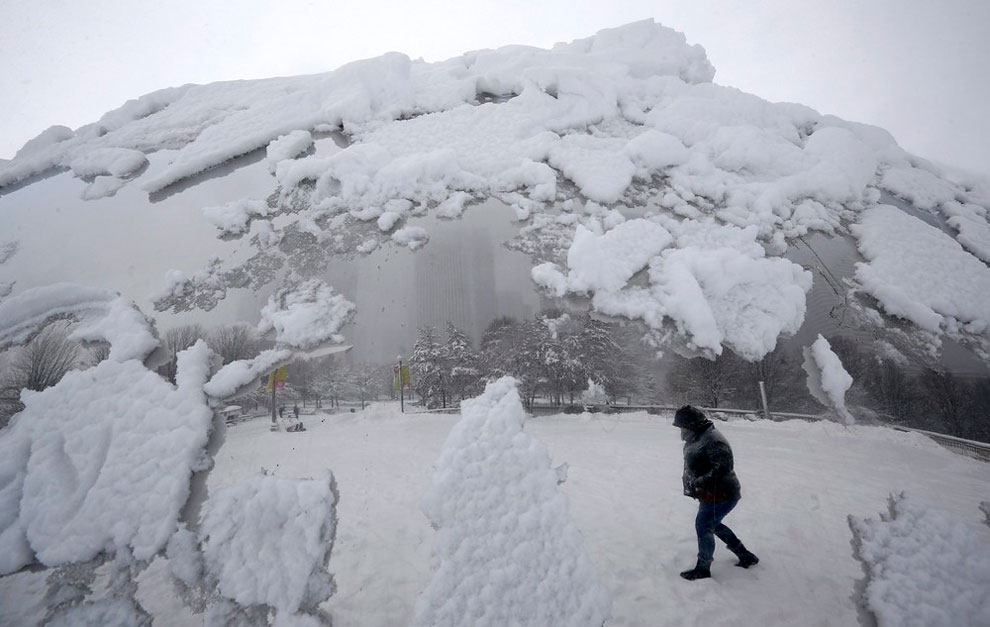 A woman is reflected in the snow-covered sculpture “Cloud Gate” as she walks through Millennium Park during blizzard conditions in Chicago, Illinois February 1, 2015. (Photo by Jim Young/Reuters) 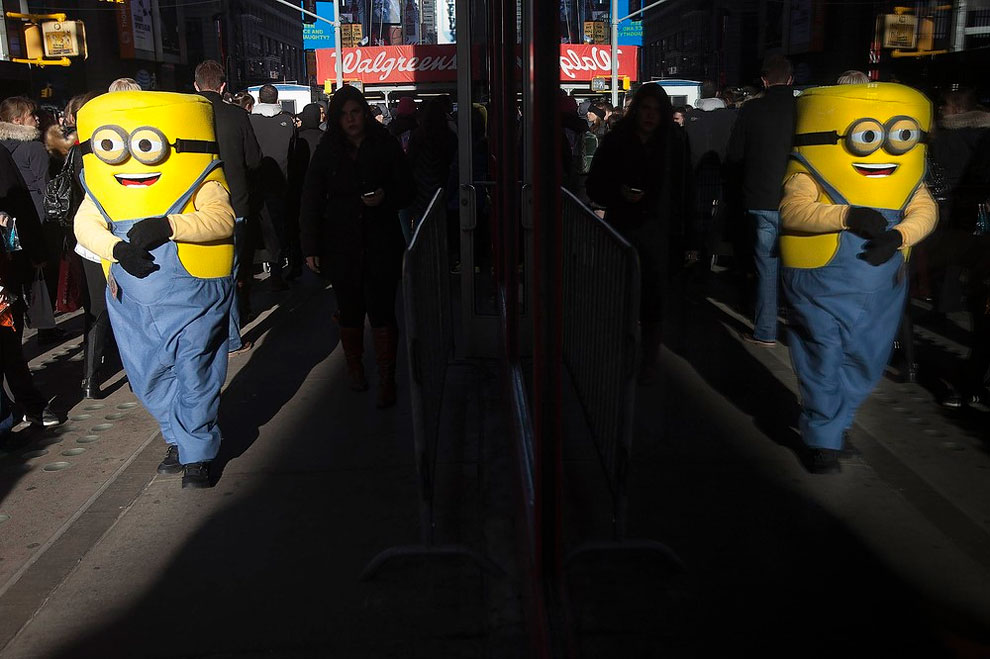 A person dressed up as a Minion is reflected in a window at Times Sqaure in New York December 29, 2014. (Photo by Carlo Allegri/Reuters) 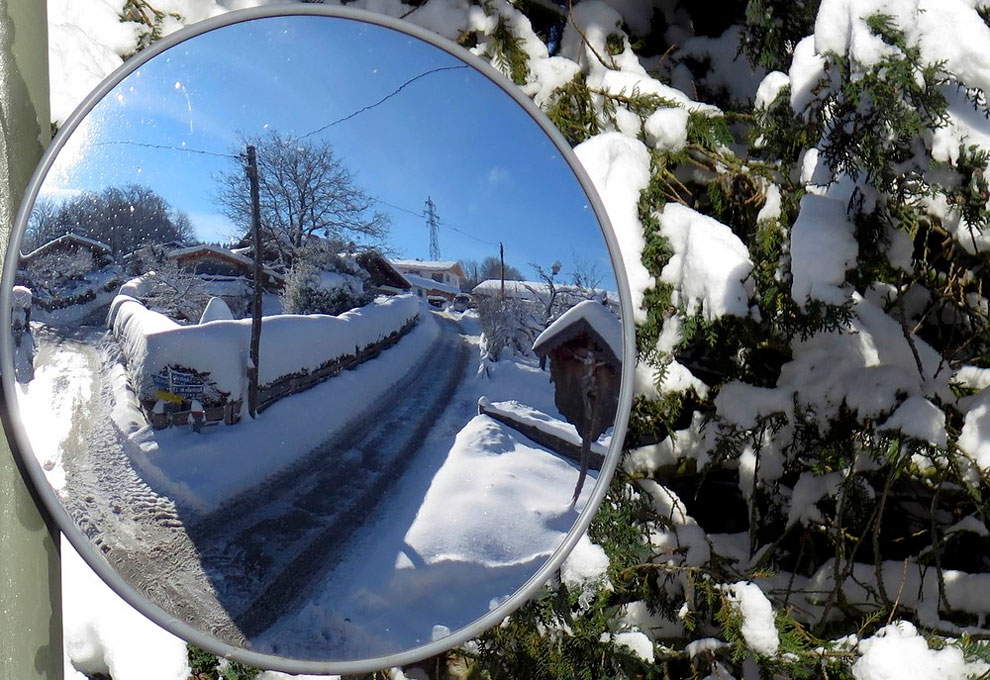 A snow covered street is reflected in a traffic mirror in the southern German village of Warngau after heavy snowfall February 3, 2015. (Photo by Michael Dalder/Reuters) 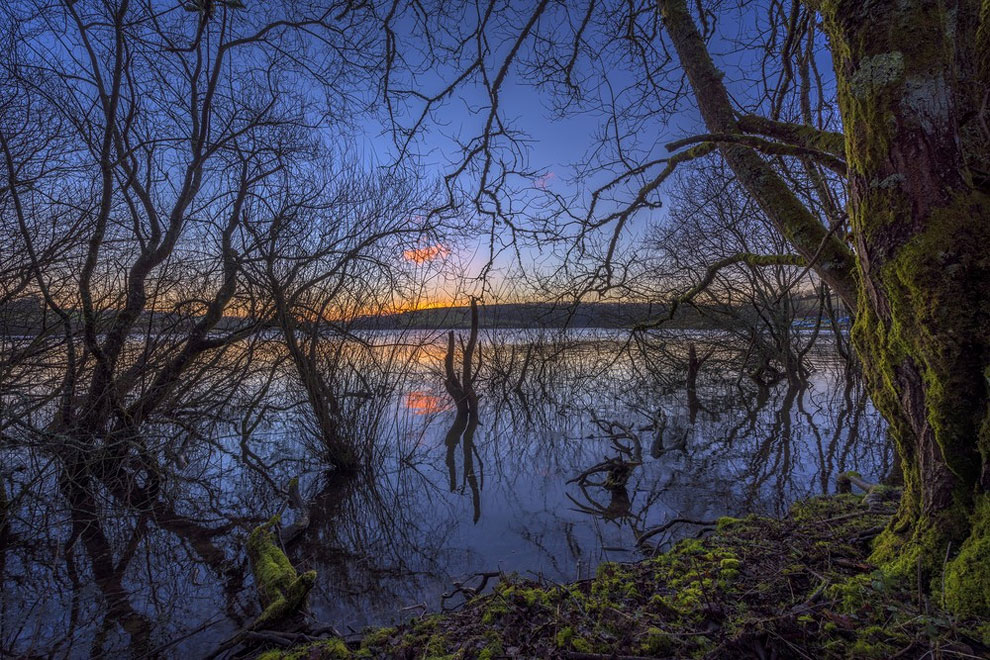 A majestic sunrise over Wimblewall Lake in Dulverton on January 30, 2015 in Somerset, England. Wimblewall lake, which is is currently experiencing high water levels, is a favourite spot for anglers and water sports enthusiasts. (Photo by Vistaphotography/Barcroft UK Office) 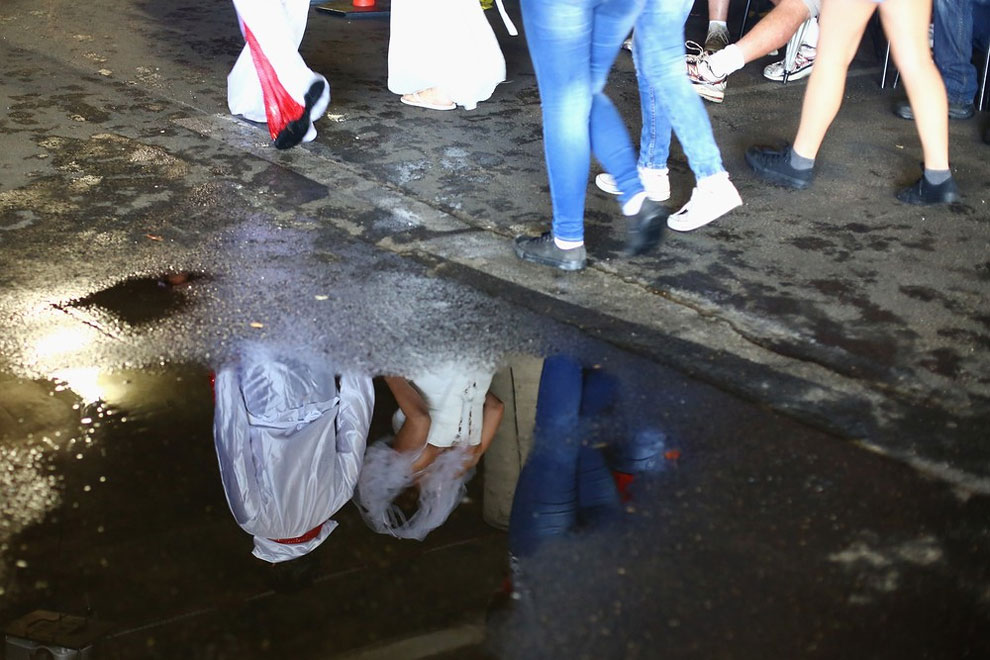 Chris Madoyris dressed as Elvis and his wife Mary Madoyris dressed as a bride arrive at the renewal of vows ceremony in the Big W carpark during the Parkes Elvis Festival on January 11, 2015 in Parkes, Australia. The Parkes Elvis Festival is held annually over five days, timed to coincide with Elvis Prestly’s birth date in January. Over 1300 attendees are expected this year, marking Elvis’ 80th birthday. (Photo by Mark Kolbe/Getty Images) 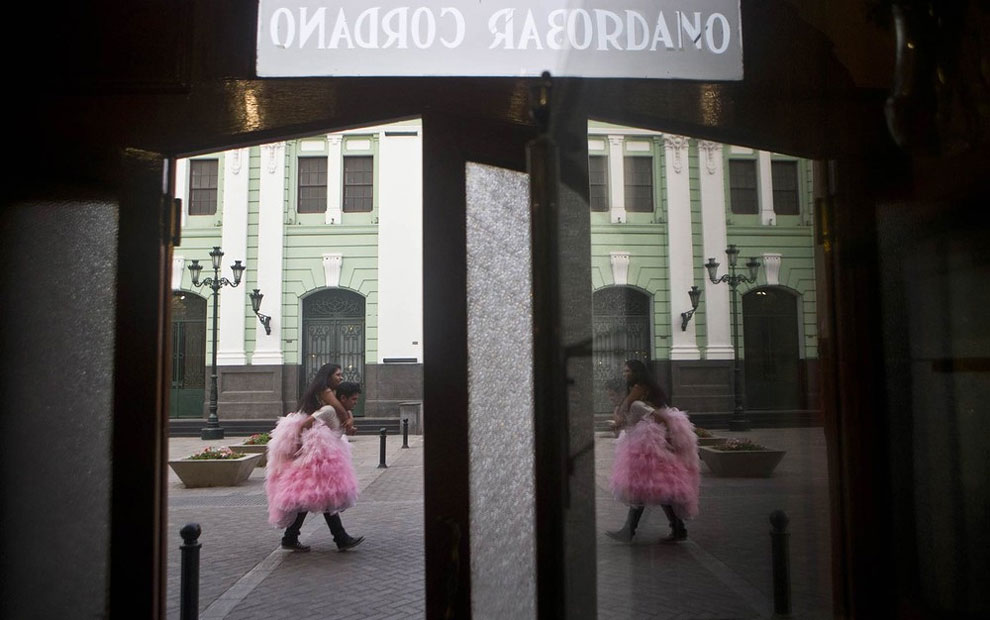 Daysi Villavicencio rides on the back of a photographer’s assistant to keep her gown from getting dirty as they’re reflected in a mirror at the iconic Cordano Bar in Lima, Peru, Thursday, January 22, 2015. Villavicencio is celebrating her 15th birthday and had a series of pictures made in her formal “quinceañera” gown. (Photo by Esteban Felix/AP Photo) 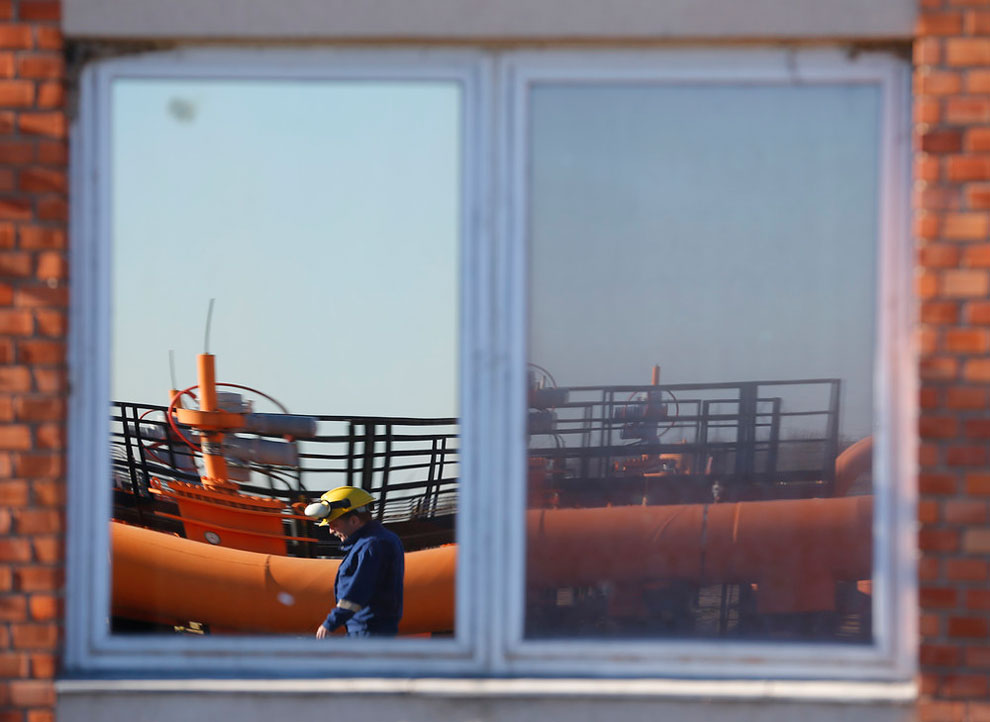 An engineer is reflected in a windows as he oversees the gas distribution system in Kiskundorozsma, 170 kilometres south of Budapest, January 15, 2015. (Photo by Laszlo Balogh/Reuters) 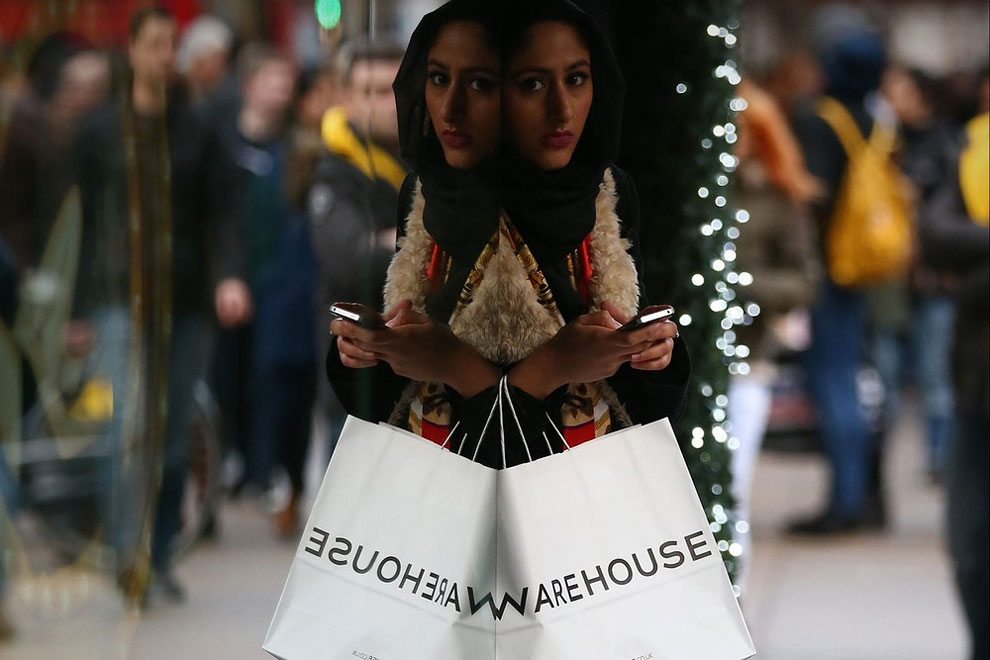 A woman waits with her shopping bags on December 24, 2014 in London, England. Up to 800m GBP is expected to be spent in a last minute, Christmas Eve, dash for presents. (Photo by Carl Court/Getty Images) 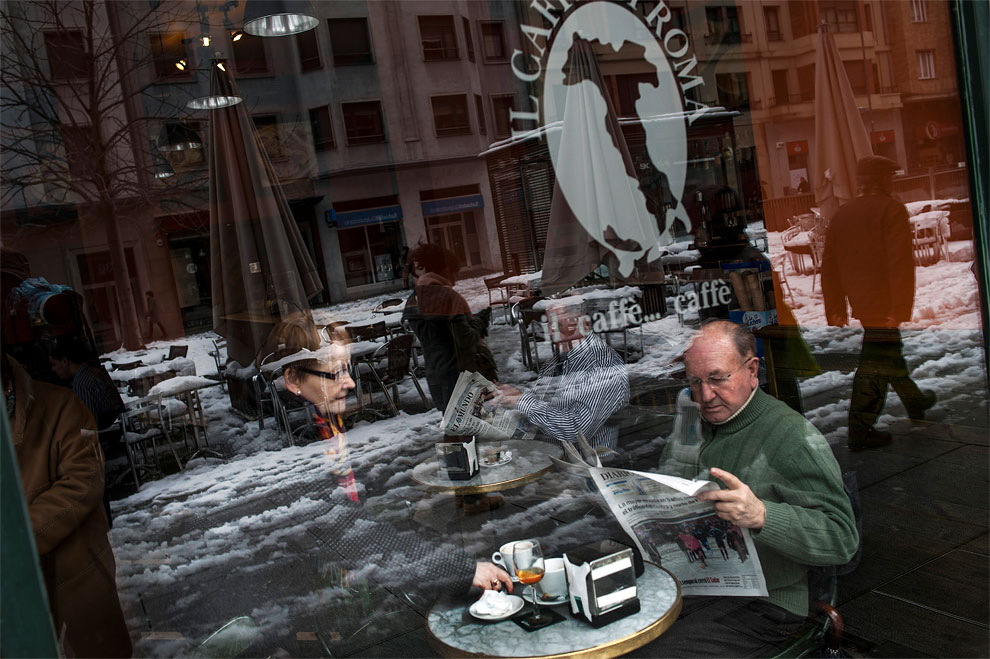 A man reads a newspaper as he enjoys a coffee as the snow reflects on the window of a coffee-bar, in Pamplona northern Spain, Monday, February 2, 2015. (Photo by Alvaro Barrientos/AP Photo) 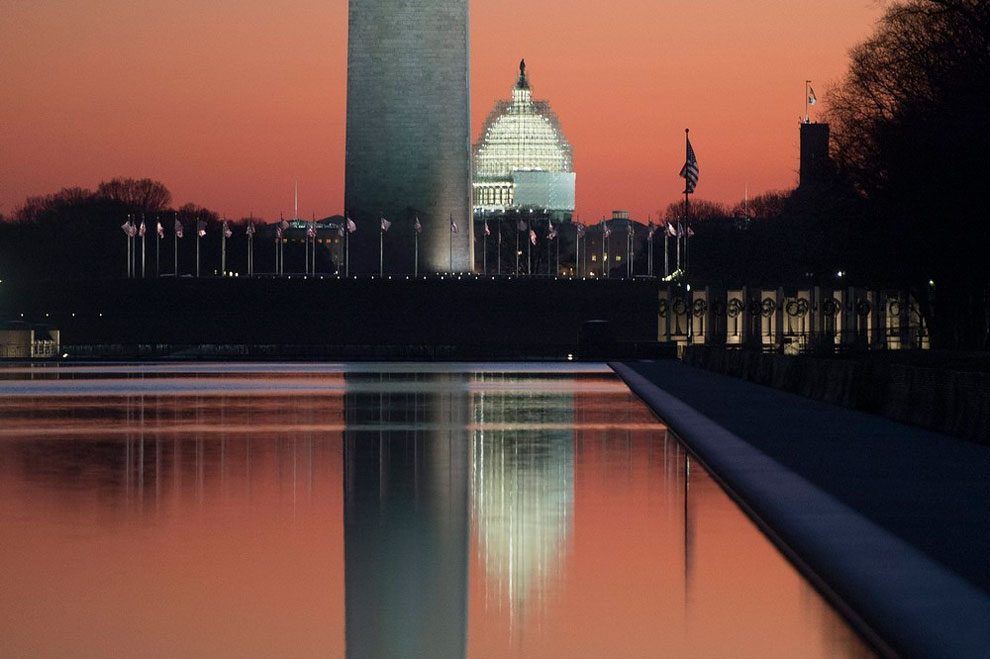 The sun begins to rise on the last day of the year, with the base of the Washington Monument and US Capitol Building reflected in the Lincoln Memorial Reflecting Pool, in Washington DC, USA, 31 December 2014. (Photo by Michael Reynolds/EPA) 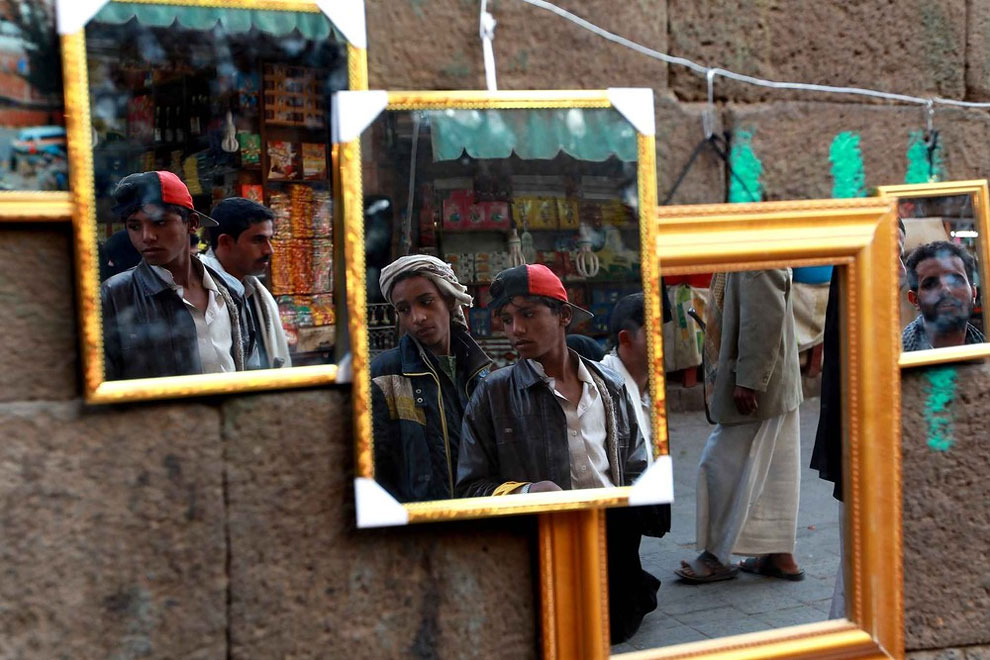 Mirrors displayed at a market show the reflections of young Yemenis in Sanaa’s old city on January 22, 2015. Shiite militiamen maintained a tight grip on Yemen’s capital with fighters deployed around the presidential palace despite a deal to end what authorities called a coup attempt. (Photo by Mohammed Huwais/AFP Photo)