Heartbreaking Stories Of Animals With Prosthetics 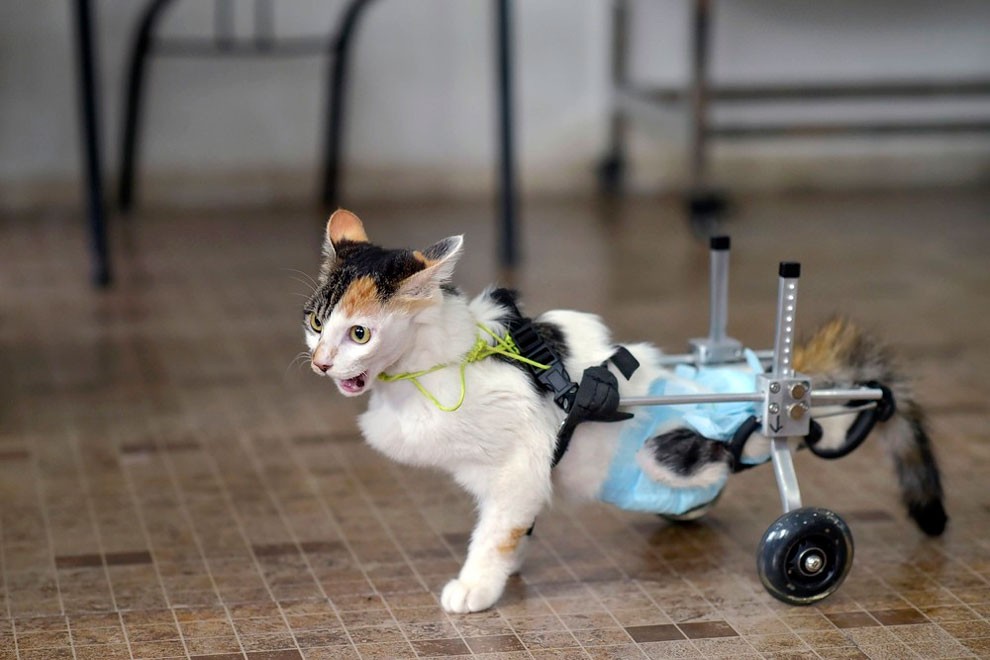 An 8-month-old cat walks with the help of a prosthetic two-wheel device, at a veterinary hospital in Chongqing municipality, March 16, 2015. The cat’s rear legs lost the abilty to walk after falling from the ninth to fifth floor of a building last November, its since undergone four major surgeries which included removing parts of its organs, local media reported. (Photo by Reuters/China Daily) A veterinarian kisses an 8-month-old cat, wearing a prosthetic two-wheel device, at a veterinary hospital in Chongqing municipality, March 16, 2015. (Photo by Reuters/China Daily) 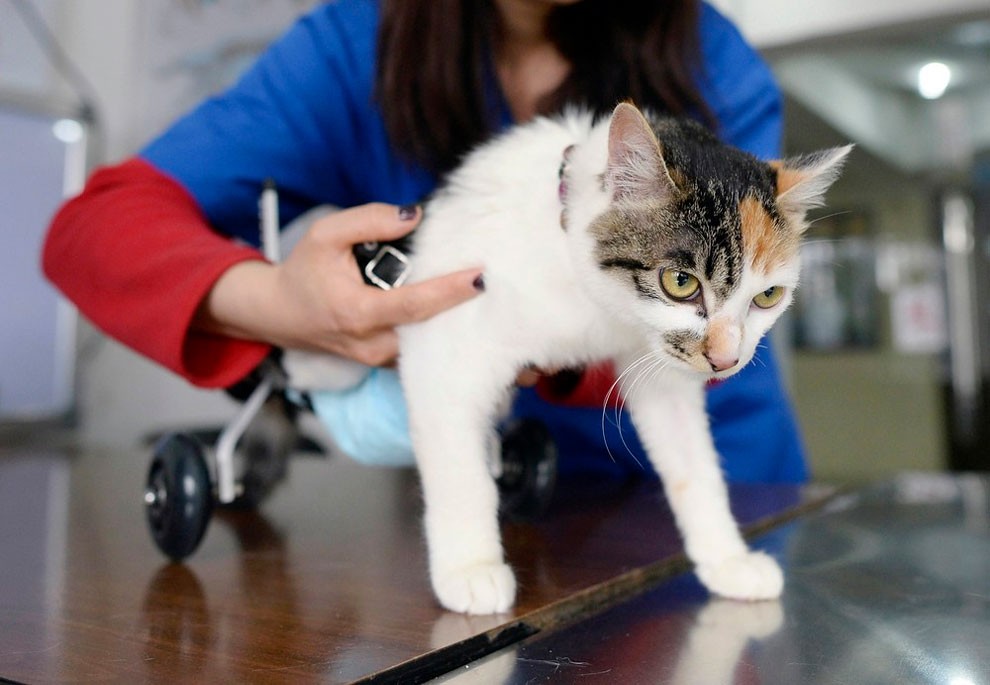 A veterinarian fits an 8-month-old cat in a prosthetic two-wheel device, at a veterinary hospital in Chongqing municipality, March 16, 2015. (Photo by Reuters/China Daily) 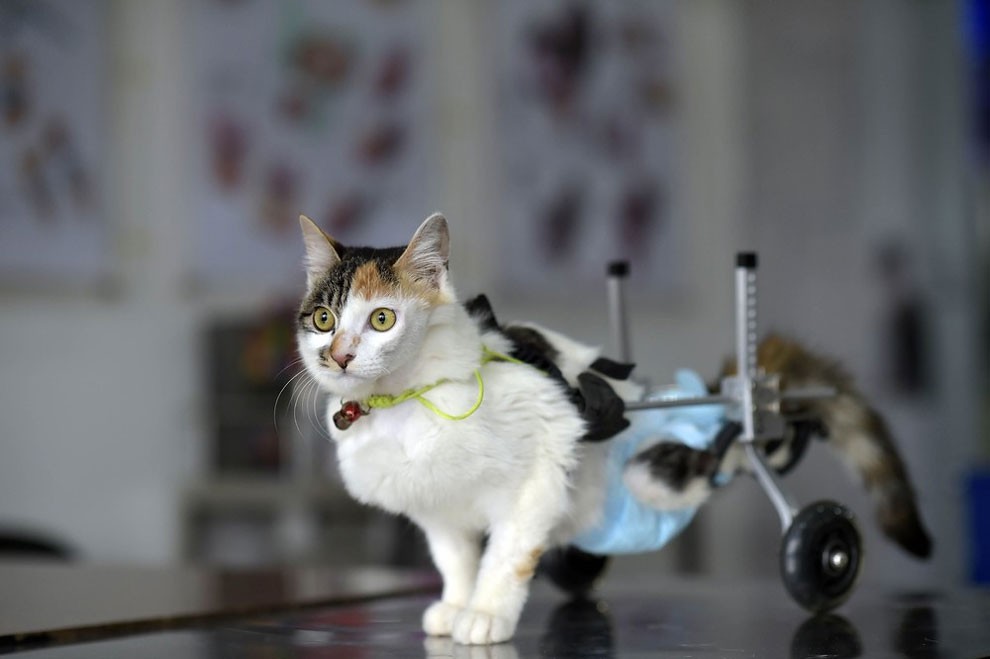 This picture taken on March 16, 2015 shows 8 month old cat Hei Hudie meaning “black butterfly” with a special walking aid in a pet hospital in China’s southwest Chongqing municipality. With the help of some good Samaritans, Hei Hudie had four surgeries within five months after it fell from the tenth floor of a building, and finally managed to live on with both of its hind legs disabled. Doctors equiped the cat with a special wheelchair to help it walk, local media reported. (Photo by AFP Photo) 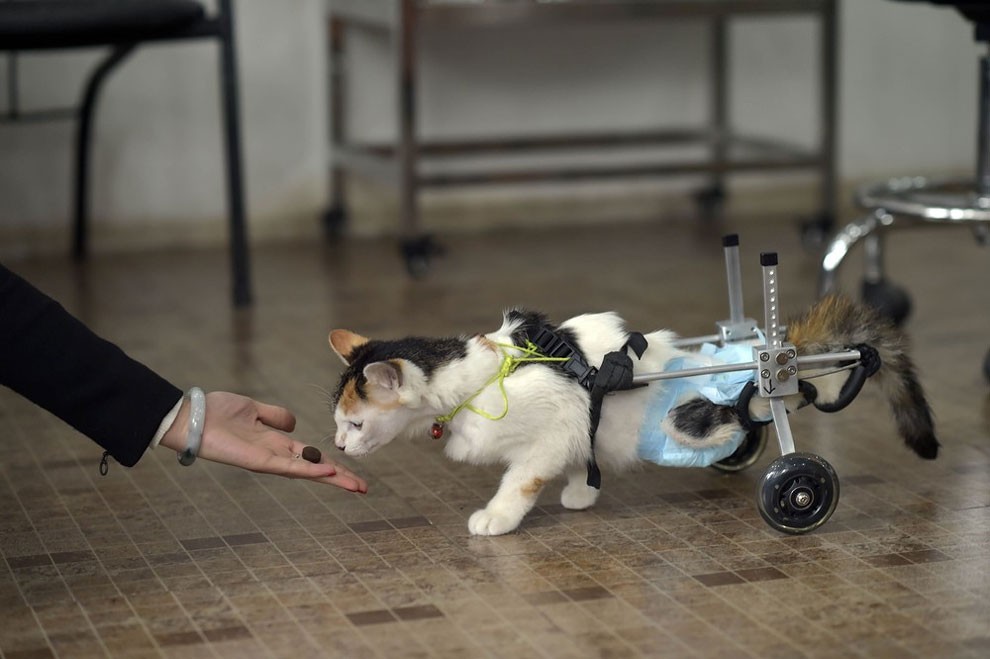 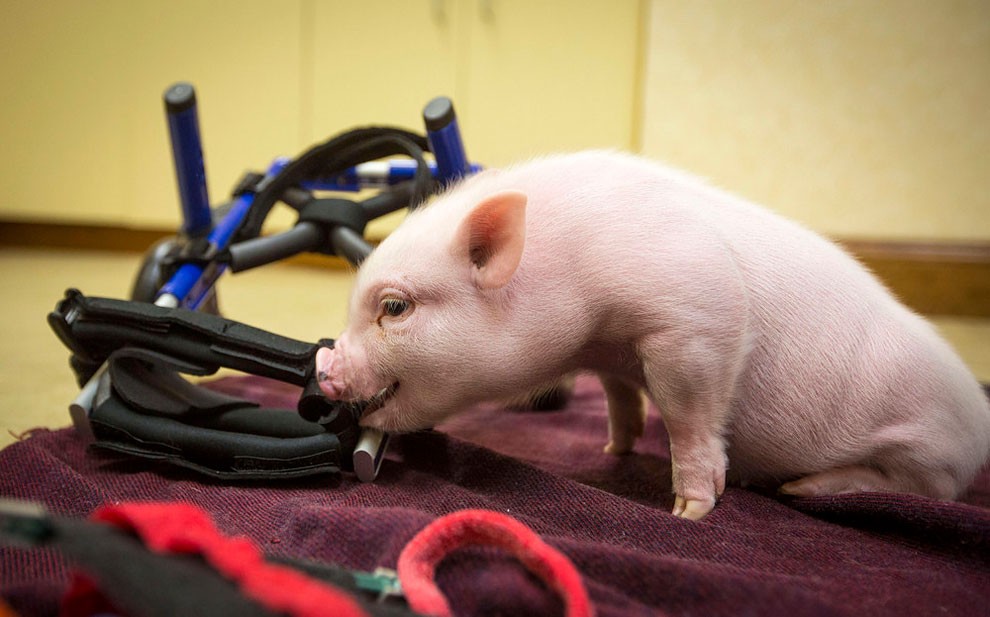 The piglet known as Chris P. Bacon examines its new wheelchair on the office floor of veterinarian and owner Len Lucerno in Clermont, Florida February 13, 2013. The piglet’s hind legs are deformed and Dr. Lucero had fashioned a wheelchair out of K’nex toys to help the piglet walk. (Photo by Scott Audette/Reuters) 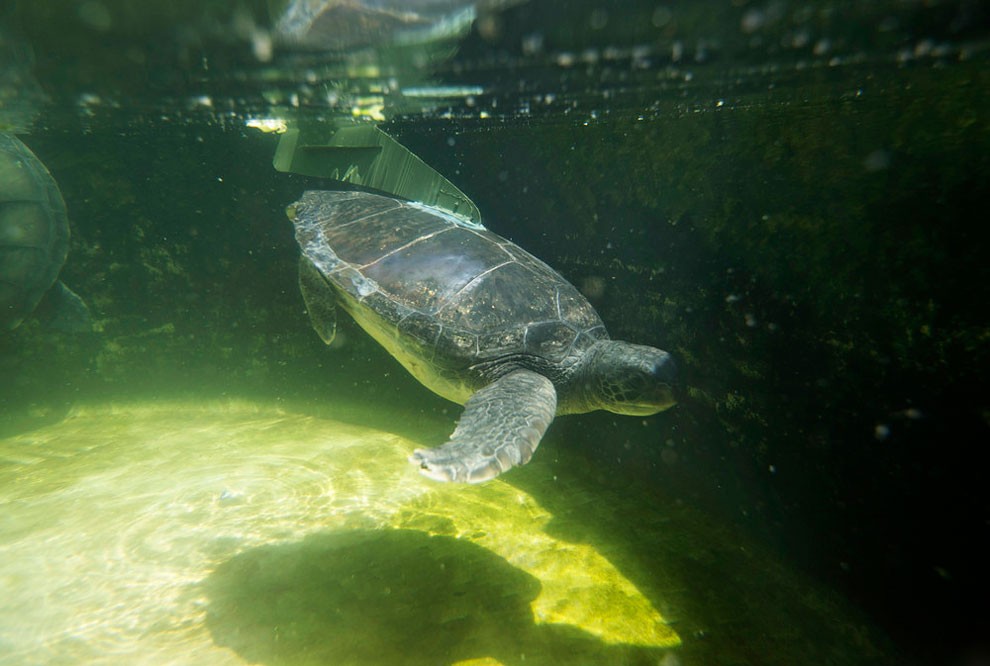 Hofesh, an injured male green sea turtle, swims in a pool after an artificial fin was attached to his back at the Israel Sea Turtle Rescue Center, in Michmoret, Israel April 9, 2014. The turtle was brought to the center missing both limbs on the left side of its body, but the artificial fin, designed by an industrial design student, Shlomi Gez, was attached to Hofesh’s back, offering stability and a more permanent solution to its disability. Hofesh will not be released back into the wild as he cannot survive if something were to happen to the fin. (Photo by Baz Ratner/Reuters) 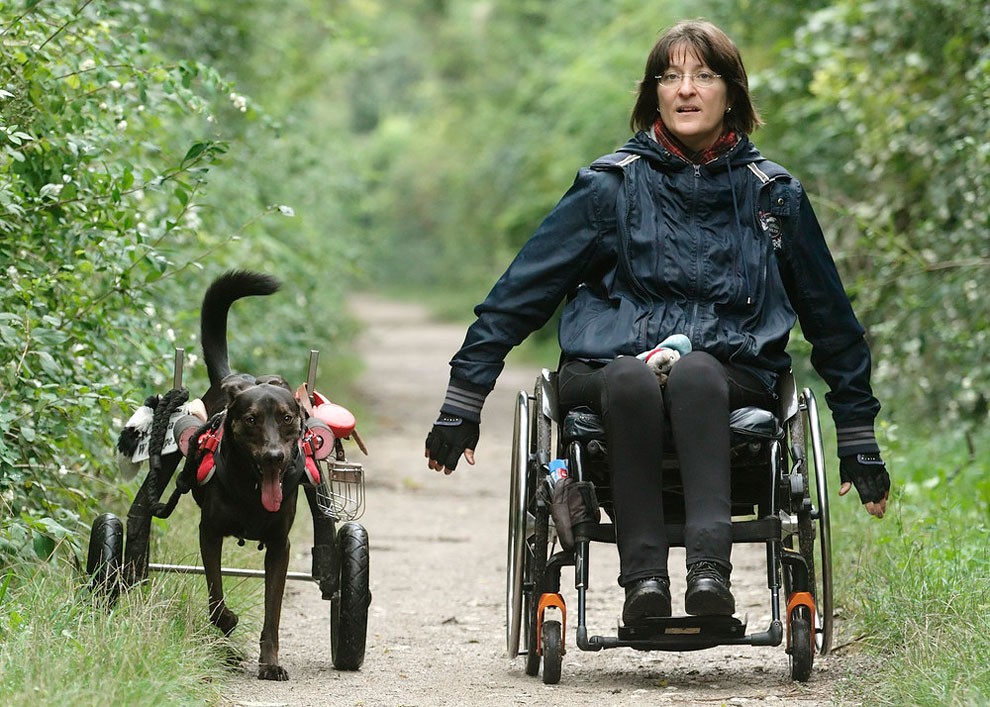 Three-years-old dog Hope uses a wheelchair to run next to its owner Regine Grosinger in Vienna September 3, 2014. Hope was found with cut-off back legs in the countryside and brought to an animal asylum when it was four-month-old. Grosinger took the dog home two months later and had a wheelchair manufactured for it. (Photo by Heinz-Peter Bader/Reuters) 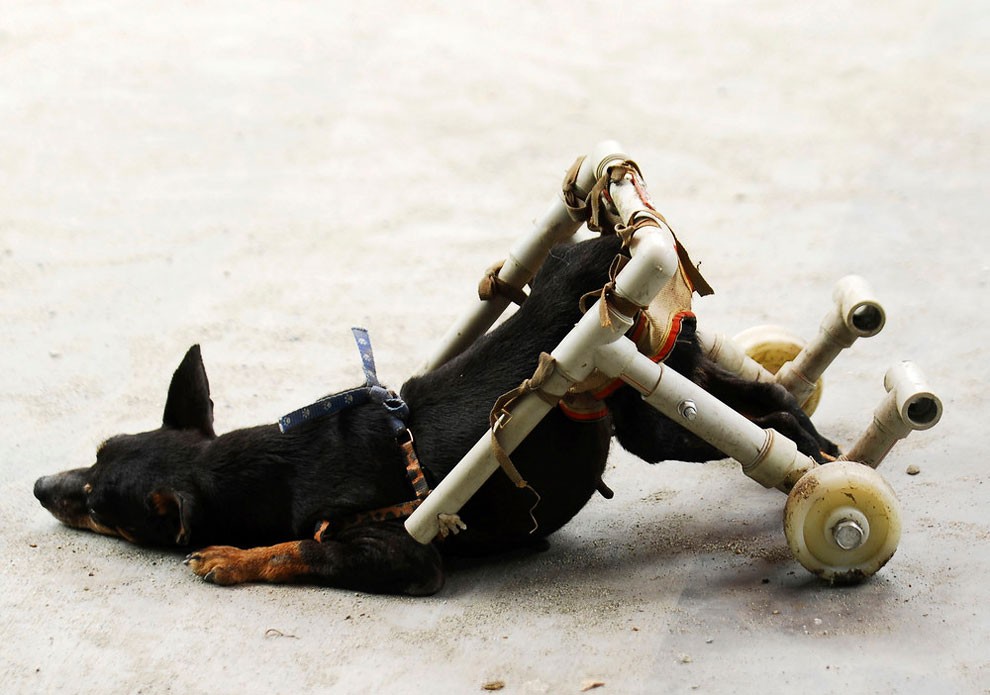 A stray dog from an area hit by an earthquake tries to walk with a home-made walker at a shelter for homeless dogs and cats in Shuangliu County, Sichuan province, China June 29, 2008. (Photo by Reuters/Stringer) 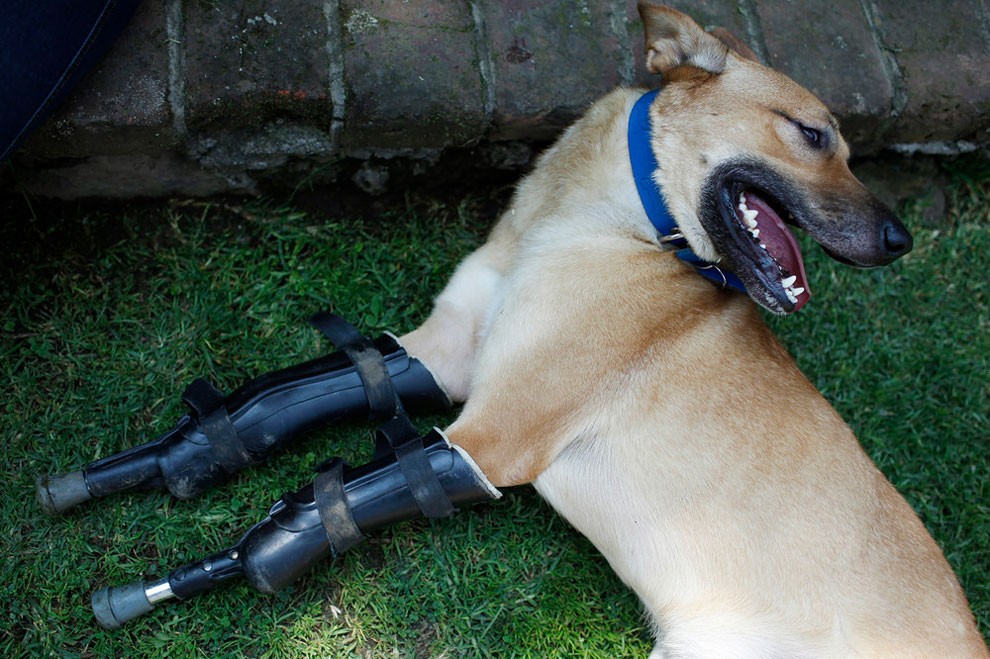 A dog named Pay de Limon (Lemon Pay) is seen fitted with two front prosthetic legs at the Milagros Caninos rescue shelter in Mexico City August 29, 2012. Members of a drug gang in the Mexican state of Zacatecas chopped off Limon’s paws to practice cutting fingers off kidnapped people, according to Milagros Caninos founder Patricia Ruiz. Fresnillo residents found Limon in a dumpster bleeding and legless. After administering first aid procedures, they managed to take him to Milagros Caninos, an association that rehabilitates dogs that have suffered extreme abuse. (Photo by Tomas Bravo/Reuters) 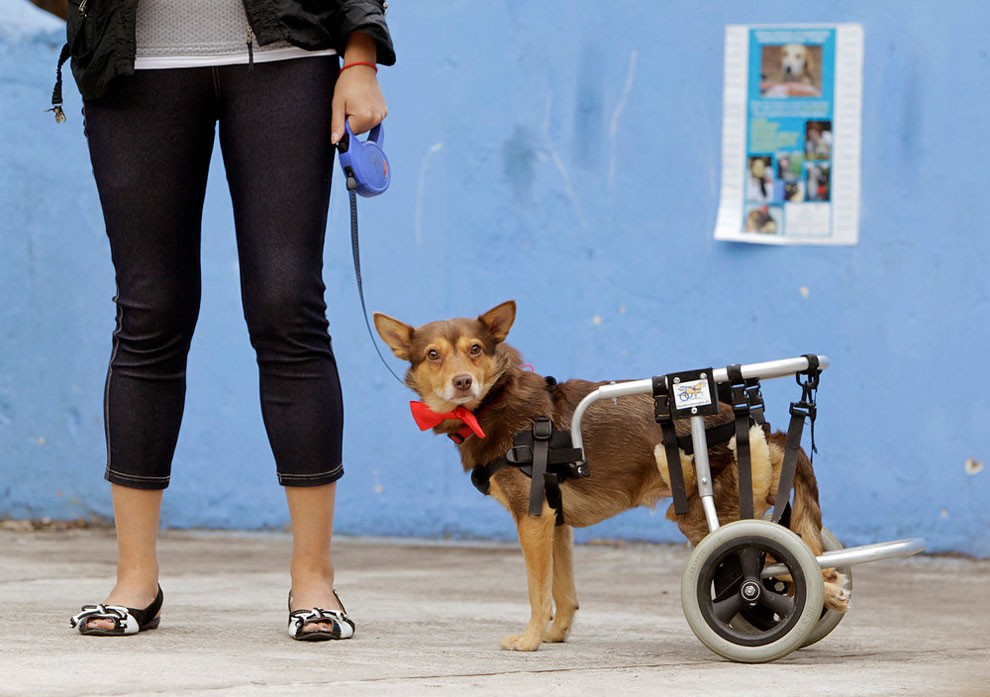 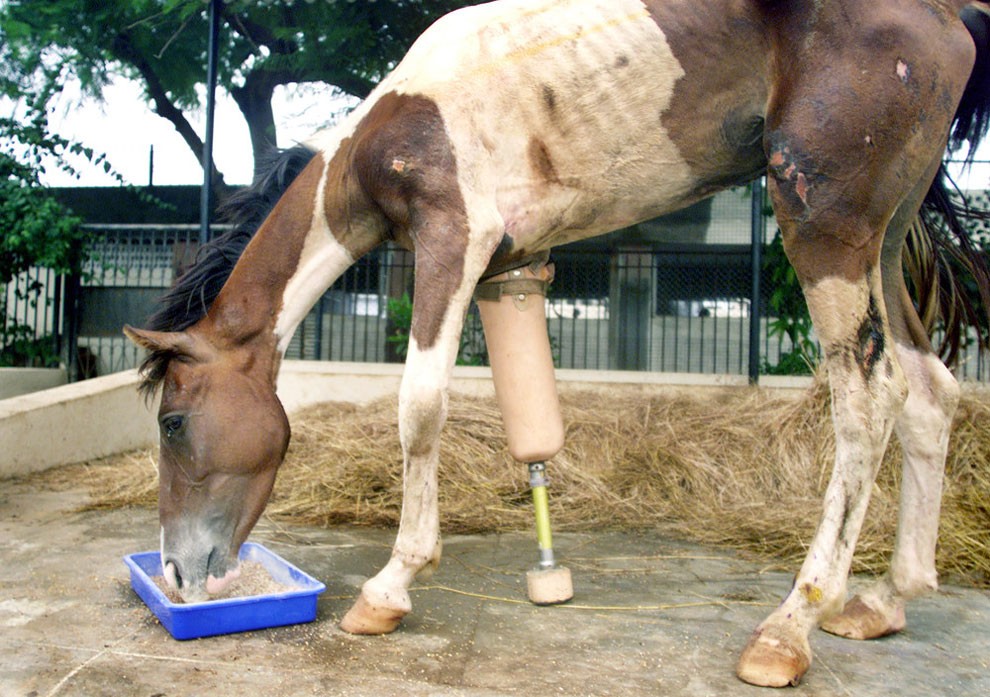 An Indian horse nicknamed “Macho”, fitted with an artificial leg, enjoys a meal in Bombay, India June 26, 2003. Doctors amputated the horse’s front right leg and gave it a plaster of Paris prosthetic after an animal welfare group found it on a highway bleeding from a leg wound. (Photo by Roy Madhur/Reuters) 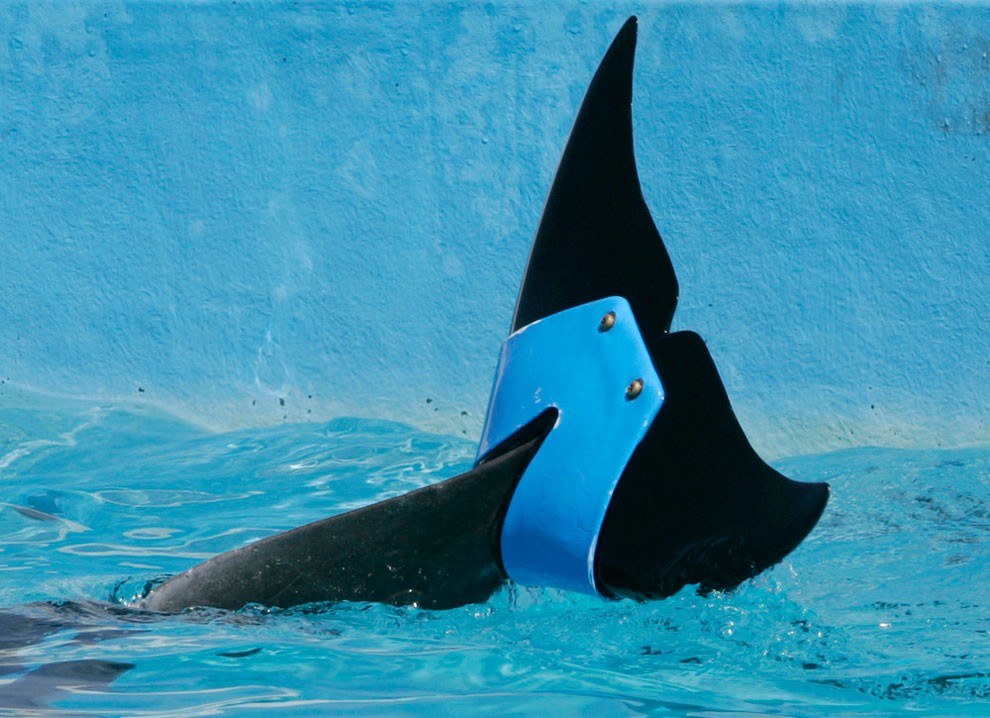 Fuji, a female bottlenose dolphin, swims using its artificial tail at Okinawa Churaumi Aquarium in Motobu town, on the southern Japanese island of Okinawa July 8, 2007. Fuji, which lost 75 percent of its tail due to an unknown disease in 2002, can swim faster and jump higher using the artificial rubber tail, which is believed to be the world’s first artificial fin for a dolphin, an aquarium official said. (Photo by Yuriko Nakao/Reuters) 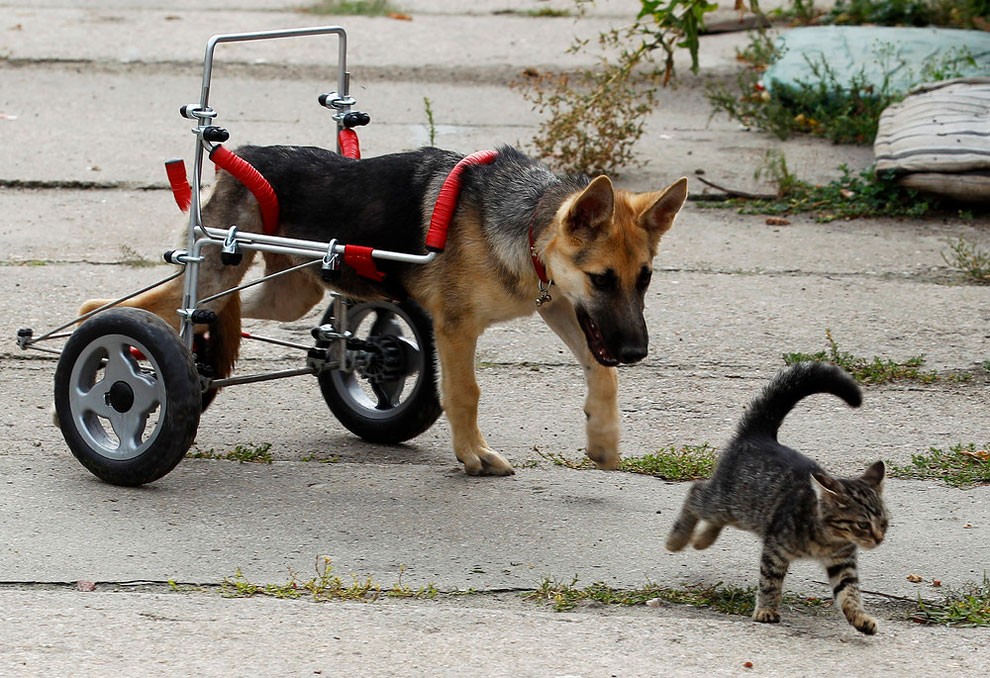 Ciuchcia (Steam train engine), a four-month-old dog, chases a cat in a courtyard after being helped onto a specially made wheelchair at Schronisko, a shelter for homeless animals, near Piotrkow Trybunalski, Poland August 26, 2011. Ciuchcia’s rear legs were paralyzed after it was physically abused and abandoned with its two siblings on a train track. The dog survived despite being run over by a number of trains, according to the staff at the animal shelter, who found Ciuchcia on July 7, 2011. (Photo by Peter Andrews/Reuters) 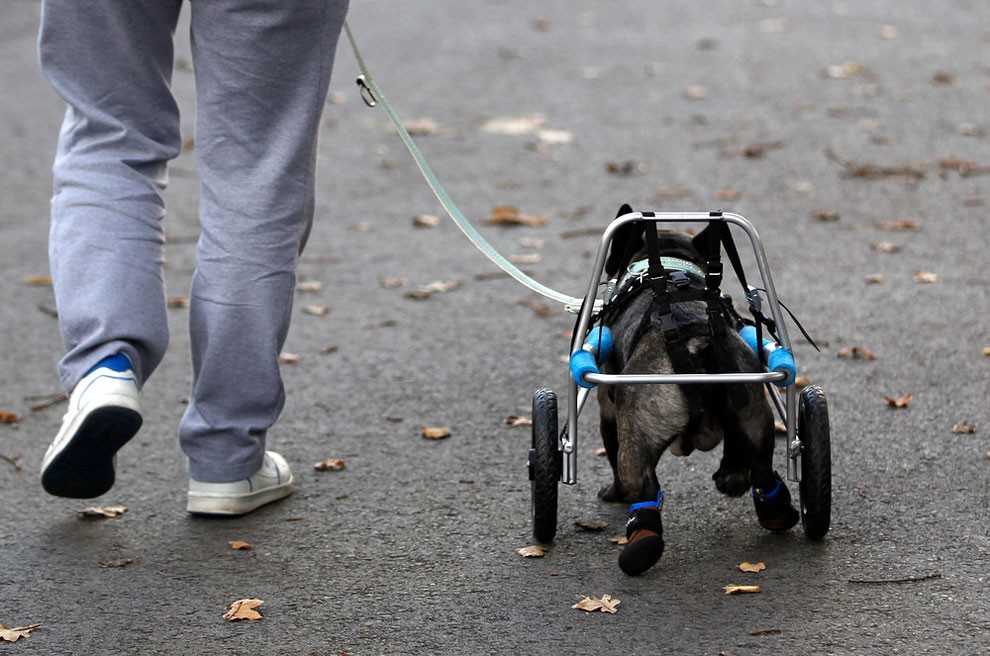 Cat Dressed In Tiny Sailors Outfit Becomes Captain Of Russian Cruise Ship
What Life Is Like Before And After You Get A Dog
What Happens To The Environment When Humans Disappear? The Wildlife Inside The Chernobyl Nuclear Disaster Exclusion Zone
January 31 – February 6, 2015: Animals
Photographer Captures Unique Photos Of Horses From The Underbelly
Monty the Cat Without a Nasal Bone
222 Golden Retrievers Frolic in a Field in Scotland
The Oldest Captive Orangutan in the World
This Monastery Adopted A Stray Dog, Now He Enjoys His Life As A Monk
Hang 20 Surf Dog Classic
Funniest Animal Fails Caught In Panoramic Pictures
World’s Largest Slug is Bigger, Slimier, and Way Cooler Than You’d Imagine
Stuff on Scout's Head
Rescued Deer Becomes A Local Celebrity In Norway
"No Animal Takes Pleasure In Suffering": Shocking Images Of The Powerful Awareness-Raising Campaign
Nimbus, a 2-Month Old Clouded Leopard Cub
Polar Bear Came To Play
Panda-suited Pickers
Stunning Images Of The Marine Seals Were Captured By A Diver Who Did Well To Hang Onto His Camera When One Of The Seals Attempted To Take A Bite Out It
Nara’s Famous Deer Wander Streets, Station In Search Of Food After Coronavirus Tourism Drop
Feeding Polar Bears From A Tank, 1950
Naughty Cat Remains Completely Unbothered After Breaking A 2,432-Piece Doraemon Figure Its Owner Spent A Week Building
Artists Create Elaborately Detailed Miniature Worlds For Their Snails
Single Guy Recreates His Twin Sister’s Baby Photos Using A Cat
Japanese Cats Love Nothing More In The World Than Watching Farmer Next Door Plant His Rice
The Custom Shelving In This Home Keeps The Cat Happy
Venezuelan Food Shortages Force Many To Abandon Their Pets
Living with Tigers
Wildlife On The Road: Amazing Photos Of Animals Crossing Roads
The Dog Shaming 2021 Wall Calendar Features Thirteen Photo Collages with Themes Like "Learned My Lesson", "That's Not Cool", "Please Come Home", and "Let's Play!"
animals, heartbreaking, prosthetics, stories