“Rise of the Machines”, Part 2 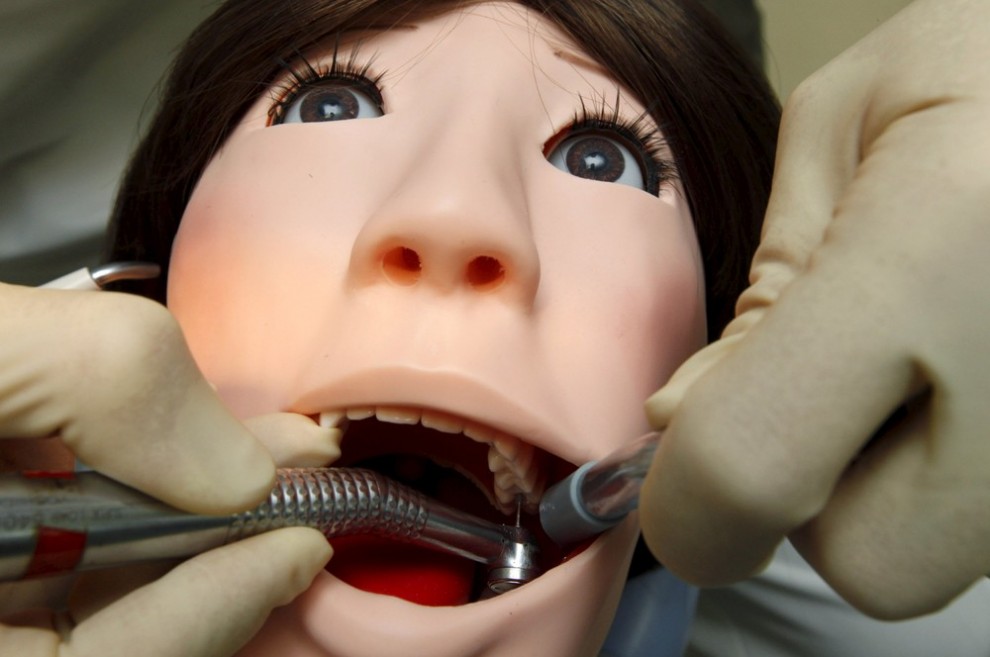 A dentist demonstrates on a dental patient robot at its unveiling ceremony at Showa University in Tokyo in this March 25, 2010 file photo. Three-fourths of robot installations over the next decade are expected to be concentrated in four areas: transportation equipment, including the automotive sector; computer and electronic products; electrical equipment and machinery. Labor costs have climbed in countries such as China that have been popular for outsourcing production, while technological advances for robots allow them to be more flexible and perform more tasks. (Photo by Kim Kyung-Hoon/Reuters) 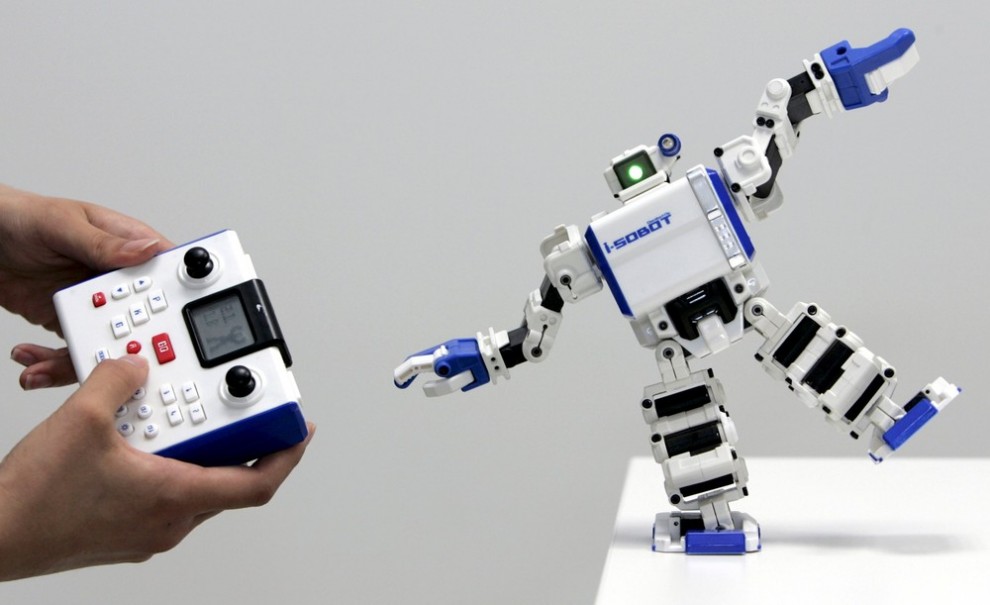 Japanese toymaker Tomy Company’s “Omnibot17u i-SOBOT”, listed by the Guinness Book of Records as the world’s smallest humanoid robot in production, is demonstrated during a news conference in Tokyo, in this July 20, 2007 file photo. (Photo by Yuriko Nakao/Reuters) 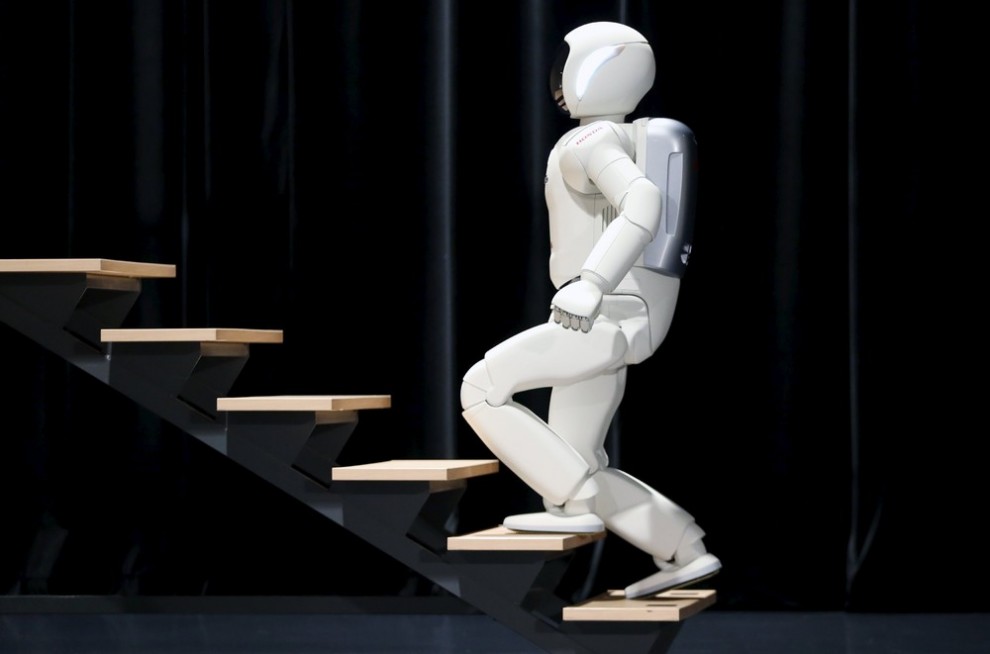 Honda’s latest version of the Asimo humanoid robot walks up stairs during a presentation in Zaventem near Brussels in this July 16, 2014 file photo. (Photo by Francois Lenoir/Reuters) 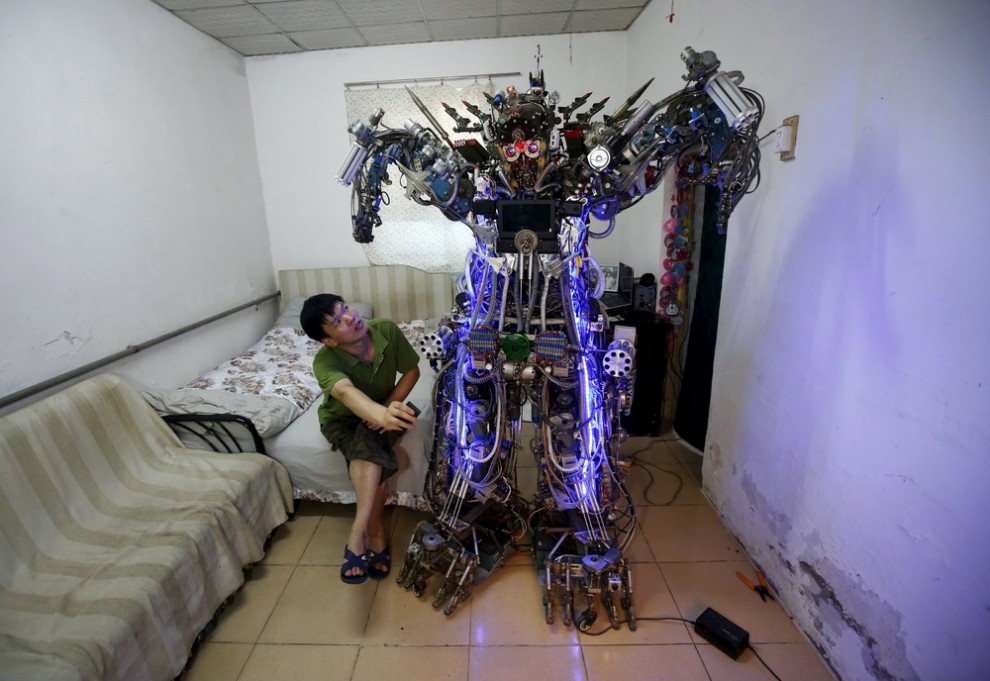 Chinese inventor Tao Xiangli controls his home-made humanoid robot with a remote controller as he poses with it during a photo opportunity at his house located in a old residential area in Beijing in this August 8, 2013 file photo. (Photo by Kim Kyung-Hoon/Reuters) 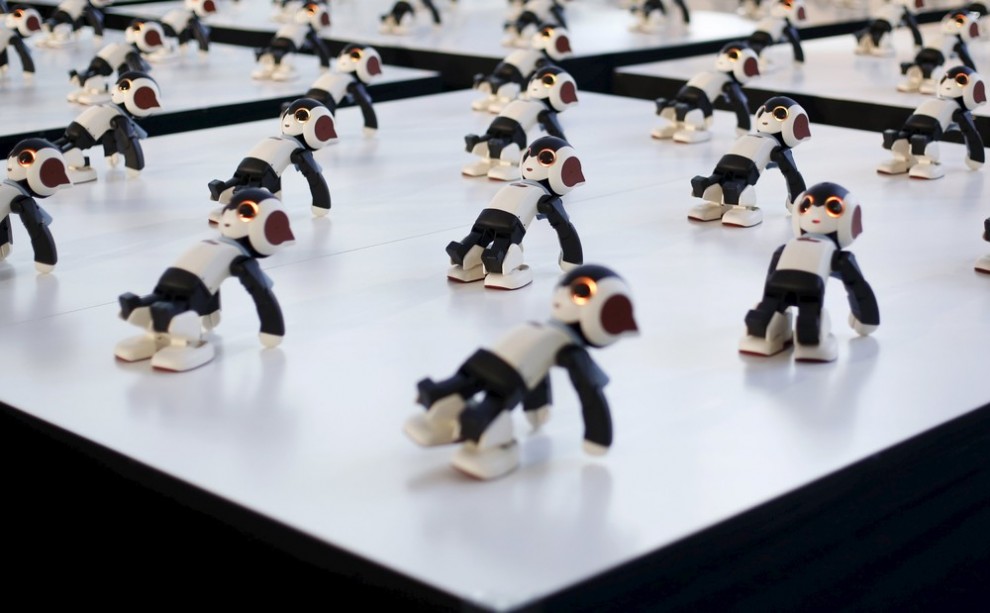 A hundred humanoid communication robots called Robi perform a synchronized dance during a promotional event called 100 Robi, for the Weekly Robi Magazine, in Tokyo, in this January 20, 2015 file photo. (Photo by Yuya Shino/Files/Reuters) 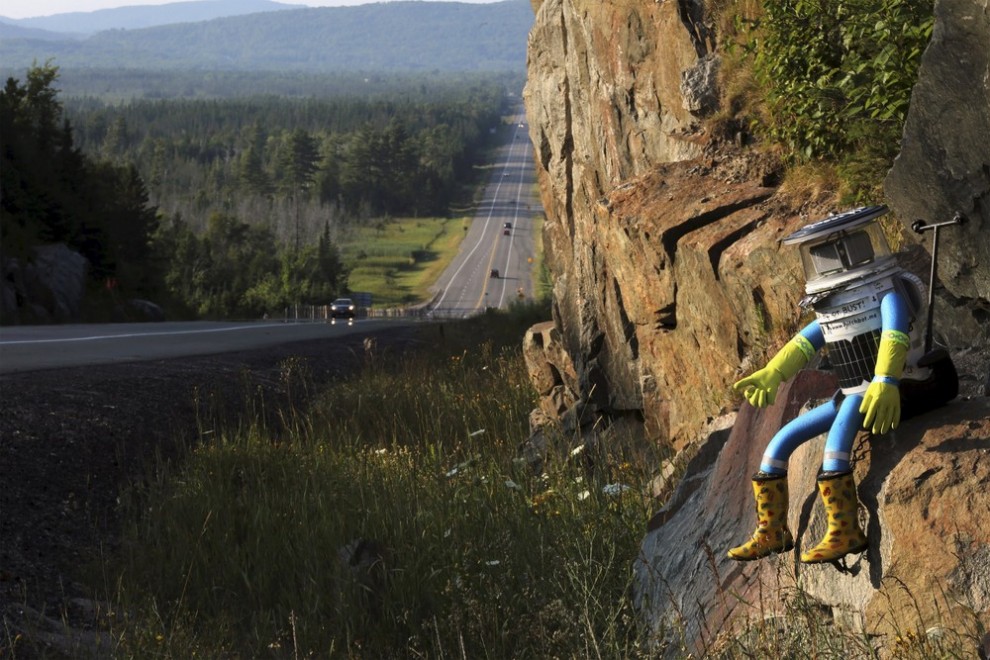 The hitchBOT is seen posed next to Highway 17 north of Sault Ste. Marie, Ontario, and a portion of the Trans-Canada Highway August 5, 2014. (Photo by Kenneth Armstrong/Reuters) 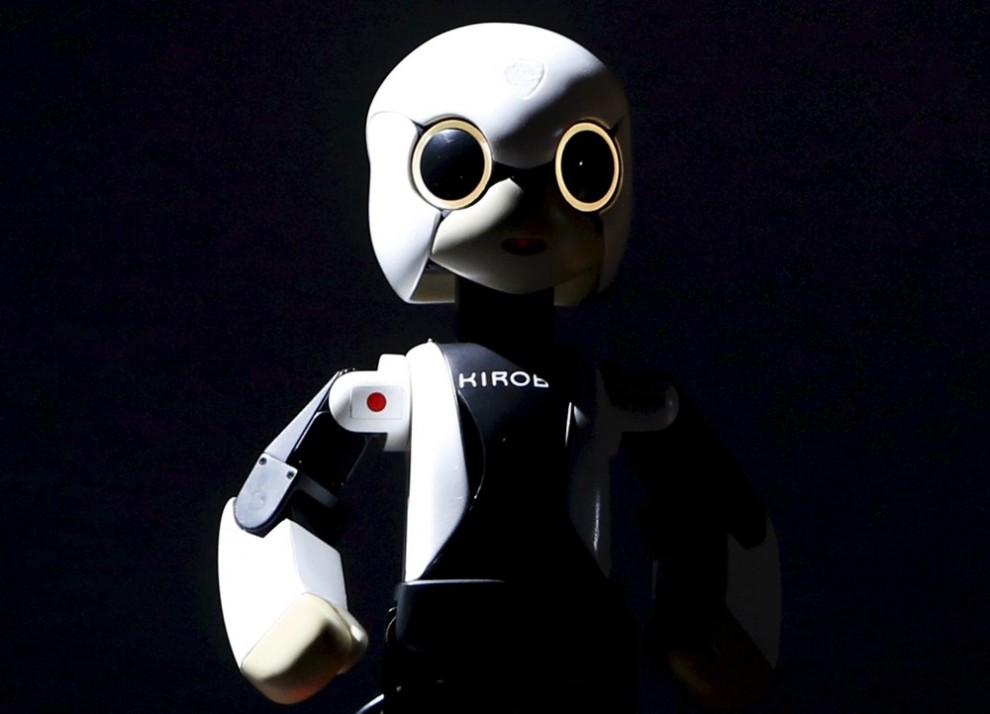 Humanoid communication robot Kirobo appears on stage during a return debriefing session from the International Space Station to Japan, in Tokyo in this March 27, 2015 file photo. (Photo by Yuya Shino/Reuters) 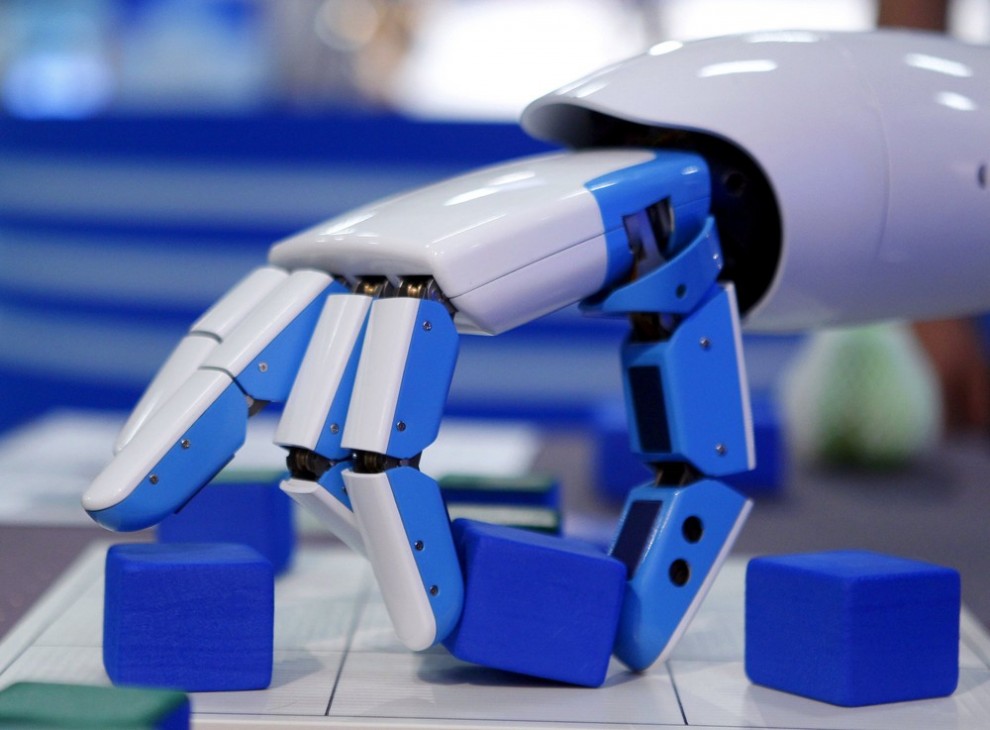 Roppie the robot plays a game of tic-tac-toe with a member of the public at the Taipei International Robot Show, in this October 19, 2010 file photo. (Photo by Nicky Loh/Reuters) 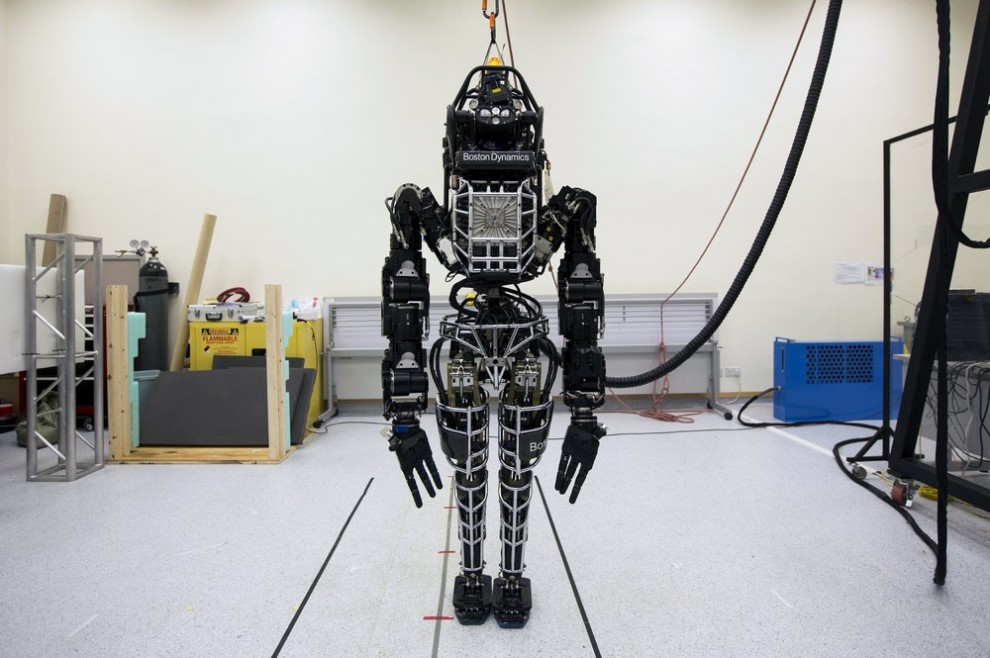 Bipedal humanoid robot “Atlas”, primarily developed by the American robotics company Boston Dynamics, is presented to the media during a news conference at the University of Hong Kong in this October 17, 2013 file photo. (Photo by Tyrone Siu/Reuters) 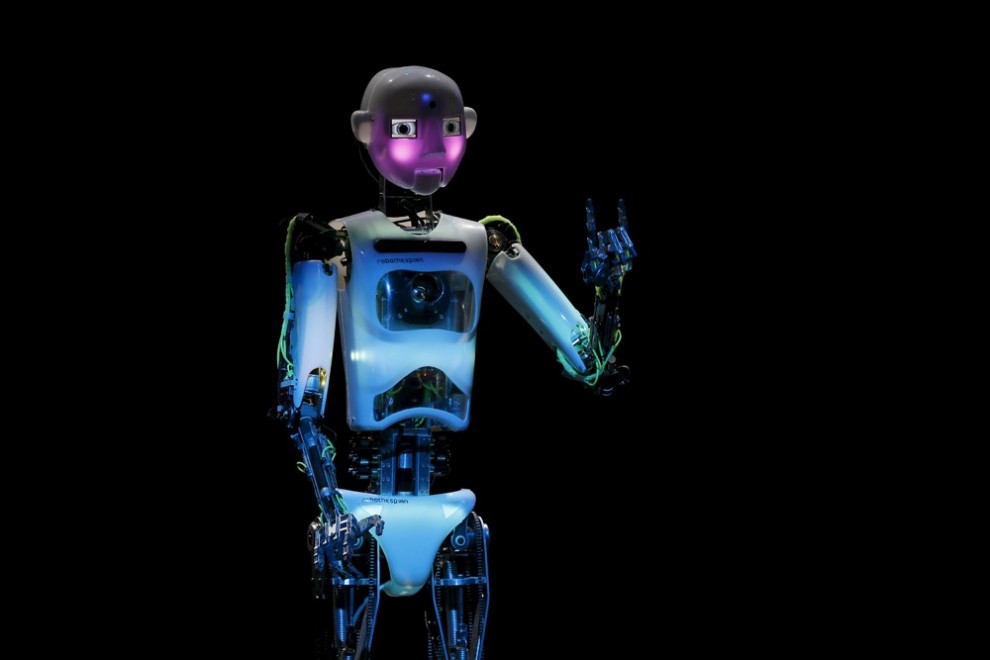 Humanoid robot of British company RoboThespian “blushes” during the opening ceremony of the Hanover technology fair Cebit in this March 9, 2014 file photo. (Photo by Wolfgang Rattay/Reuters) 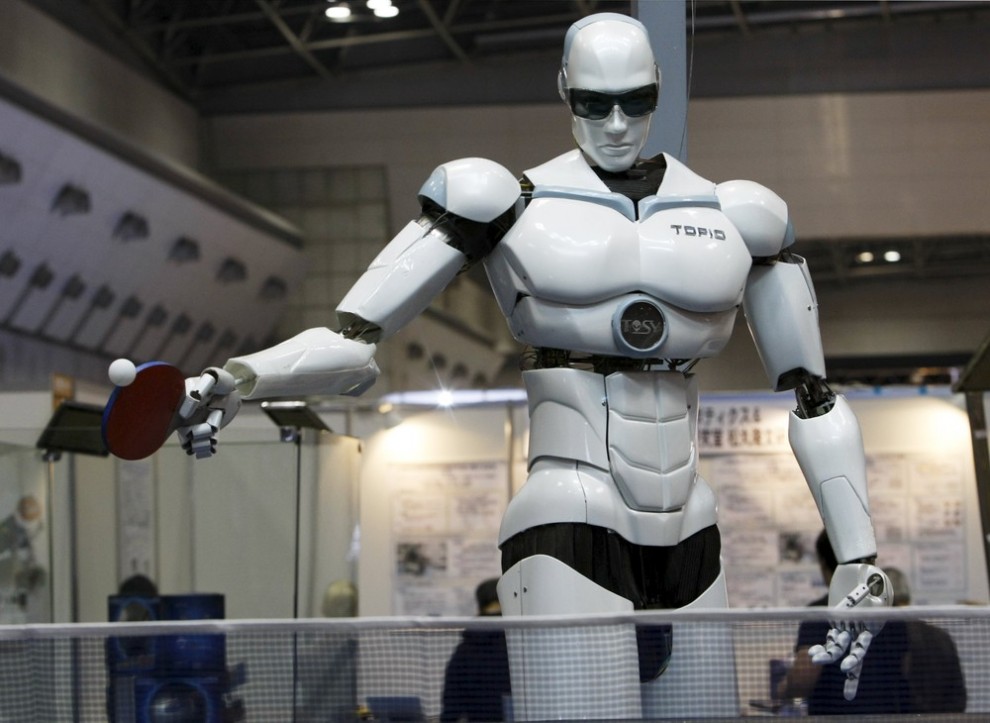 Pingpong-playing robot “Topio” is displayed during the International Robot Exhibition 2009 in Tokyo in this November 25, 2009 file photo. (Photo by Kim Kyung-Hoon/Reuters) 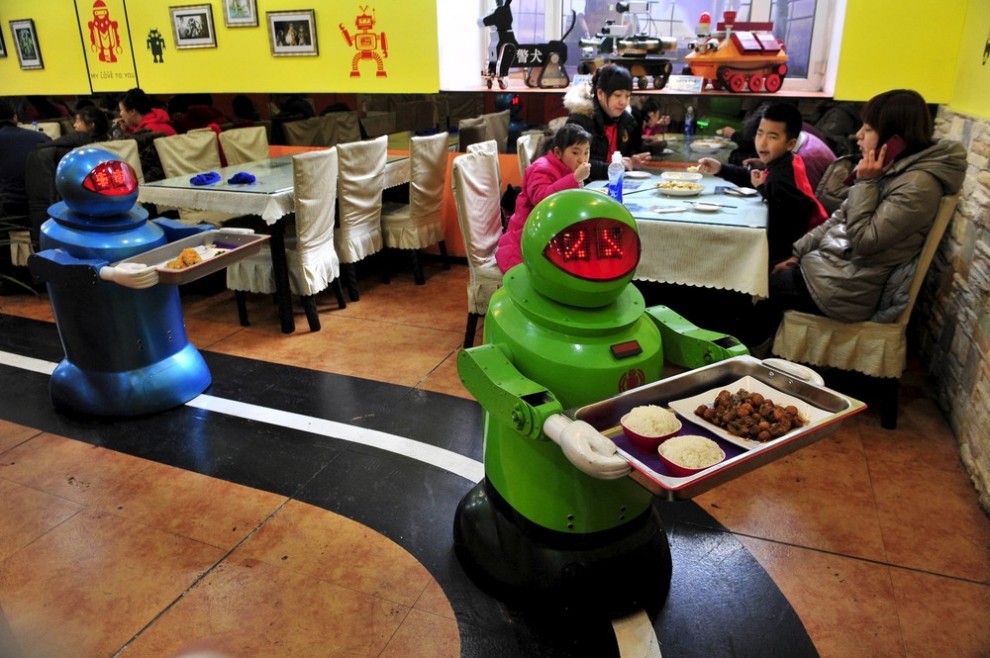 Robots deliver dishes to customers at a Robot Restaurant in Harbin, Heilongjiang province in this January 12, 2013 file photo. (Photo by Sheng Li/Reuters) 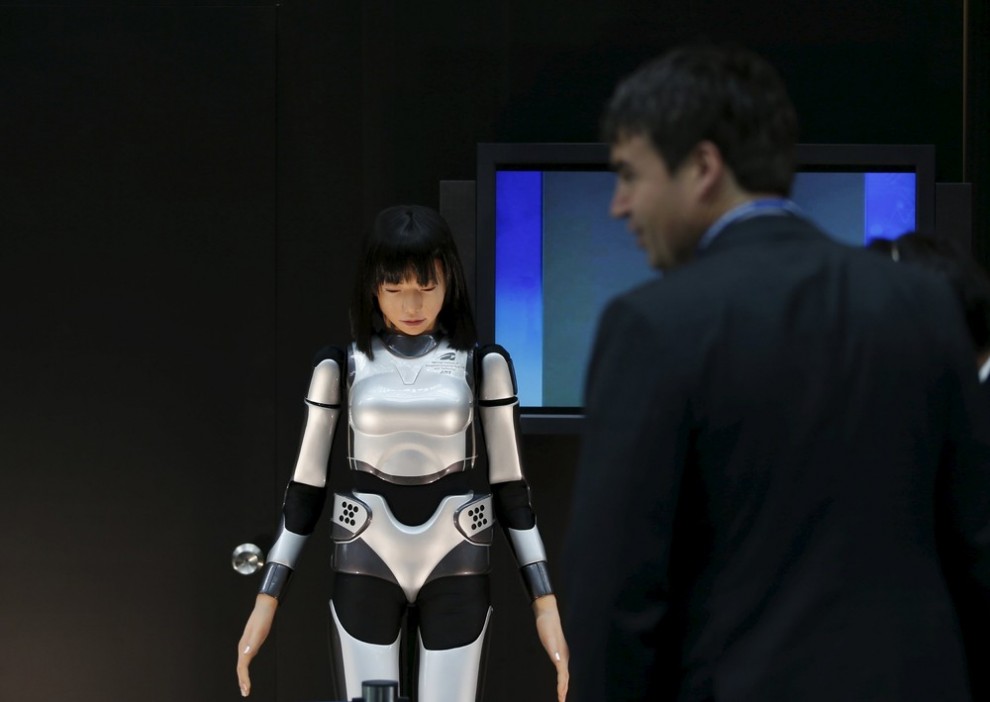 A man looks at the HRP-4C Miim humanoid robot at the venue of the Annual Meetings of the International Monetary Fund and the World Bank Group in Tokyo, in this October 9, 2012 file photo. (Photo by Toru Hanai/Reuters) 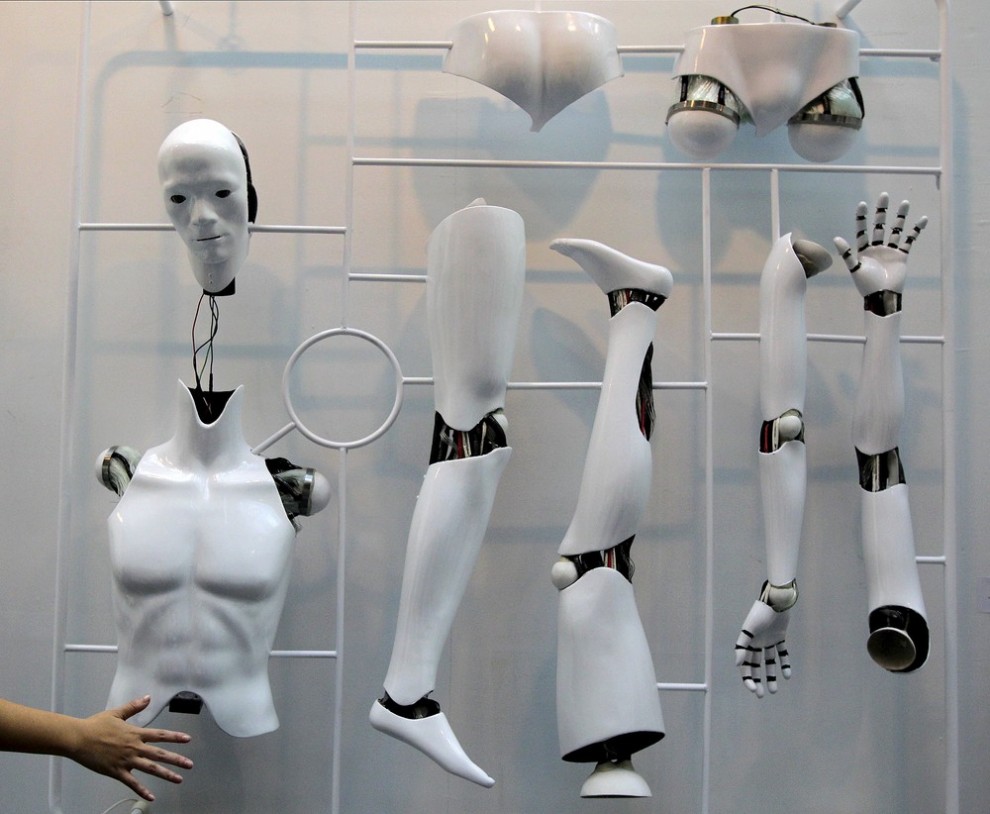 A visitor waves in front of the sensor that triggers the joints of a dummy that is part of “PWM1”, an art creation by Taiwan artist Huang Zan-lun, during the Art Taipei 2010 in this August 20, 2010 file photo. (Photo by Pichi Chuang/Reuters) 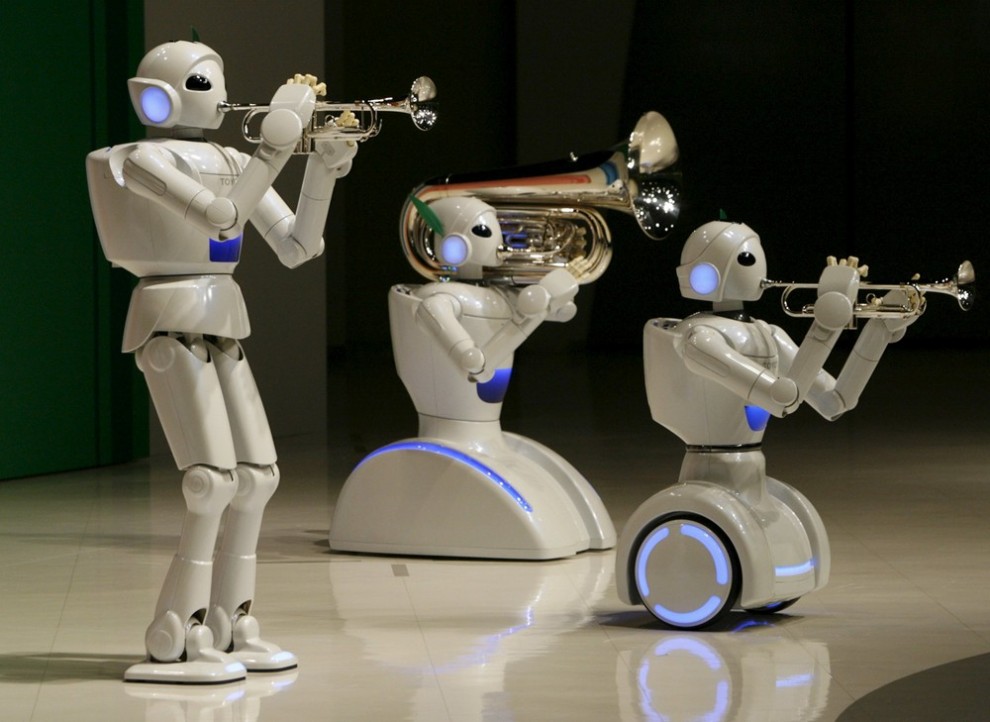 Toyota Motor Corp’s partner robots play instruments at the company’s showroom in Tokyo, in this May 4, 2008 file photo. (Photo by Toru Hanai/Reuters) 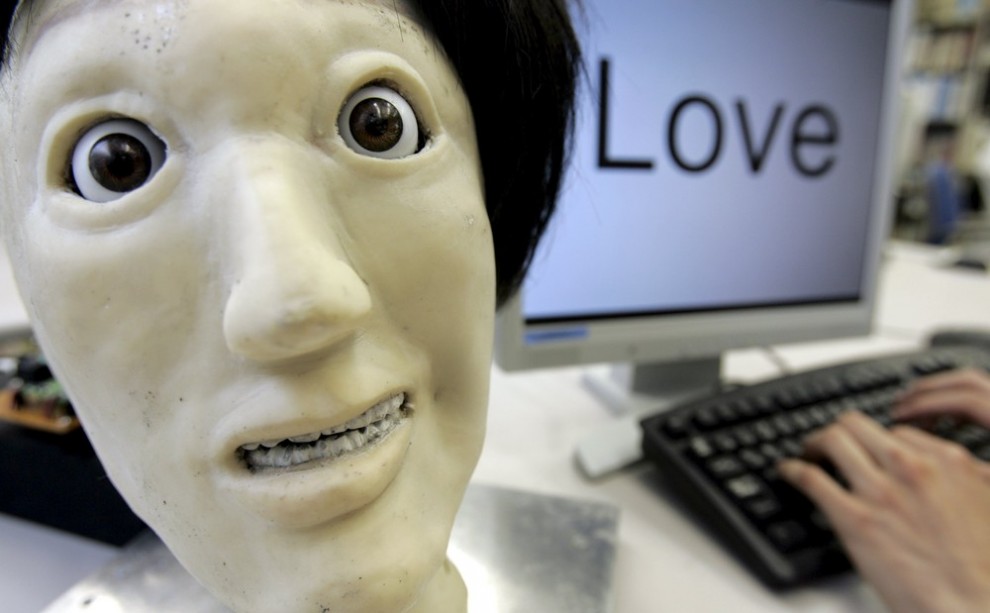 A humanoid robot named Kansei, meaning “sensibility” in Japanese, makes a facial expression depicting “happiness”, next to the word “Love” during a demonstration at a laboratory of Meiji University’s Robot and Science Institute in Kawasaki, south of Tokyo in this June 4, 2007 file photo. (Photo by Yuriko Nakao/Reuters)

The Making of a Windfarm
As The Standard Of The World Turns: Lovely Photos Of 1965 Cadillac Coupe DeVille
This New Electric Bike Was Designed With A Portable Battery
Rarest And Oldest Porsche: Yours For About $20 Million
This Unbelievable 1959 Curtiss-Wright Model 2500 Air-Car
Bulgarian Stray Cat Get Bionic Legs
Robot Guards will soon begin Patrolling South Korean Prisons
Computerspielemuseum in Berlin
Chevy Vega And The Vert-A-Pac Rail System In The 1970s
Wonderful Photos Of 1954 Chevrolet Corvair, Which Was Touted As A New Aerodynamic Design
This Designer Has Made A Flying Hoverboard That Actually Works
“Rise of the Machines”
Bruce Campbell's Boeing 727 Home Project
Designer Turns Ridiculous Sketches Of Bicycles Into Realistic Designs
Designer From Hong Kong Spent A Year-And-A Half To Create The Humanoid Robot, Which Is Definitely Looks Like Scarlett Johansson
The New Nissan DeltaWing
The Vintage Beauty Of Soviet Control Rooms
Dominos Pizza Plans to be First Fast Food Chain on Moon
Eurostar 'Paris - London' Interior Design
Movie Scenes Before-And-After Special Effects
Students in China Use High Tech 'James Bond' Spy Devices to Cheat in College Exams
The Uniface Mask: A New Alternative to Make-up or Plastic Surgery?
Incredible Photos Of Two Roman Ships Which Were Recovered After 2,000 Years In 1929 And Lost Again During WWII
One Of The Oldest Diving Suits In Existence - Called Wanha Herra
This Bolivian Student Built The Wall-E Robot Using Materials He Obtained From A Local Rubbish Dump
The Light Phone
E-Ink Powered Watches
Set Eyes to Stunned for Russian Yo-Mobile Concept
The Lexus Hoverboard In Photos
A Wind Turbine is Illuminated in an Installation by French Artist Patrick Raynaud
machines