Silhouettes From Around The World 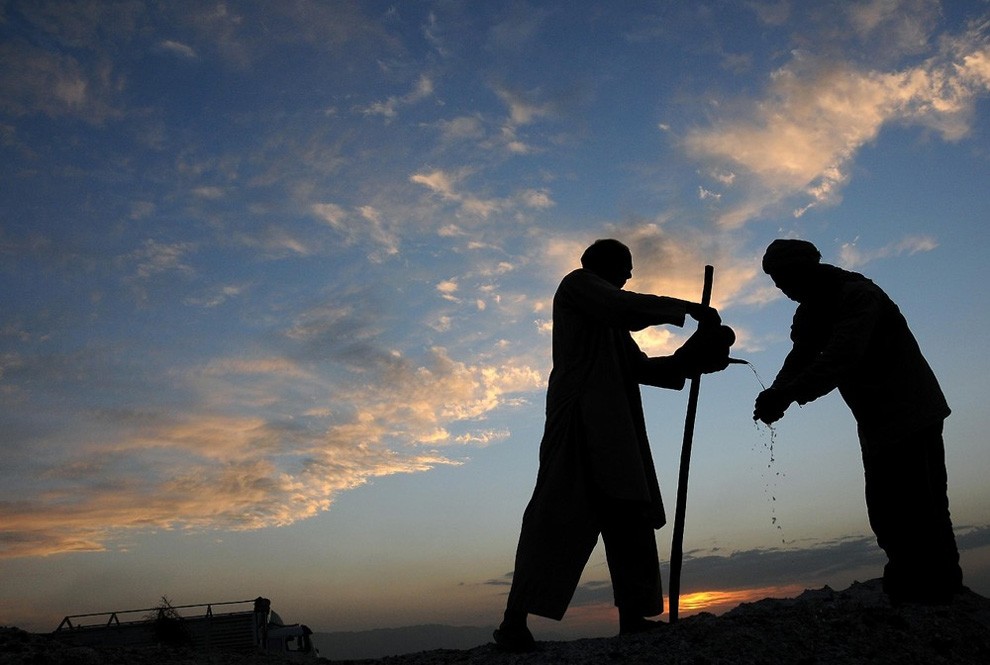 An Afghan farmer, left, pours water for his colleague to wash his hand after finishing work in Mazar-i Sharif, capital of Balkh, north of Kabul, Afghanistan on Monday, April 6, 2015. (Photo by Mustafa Najafizada/AP Photo) 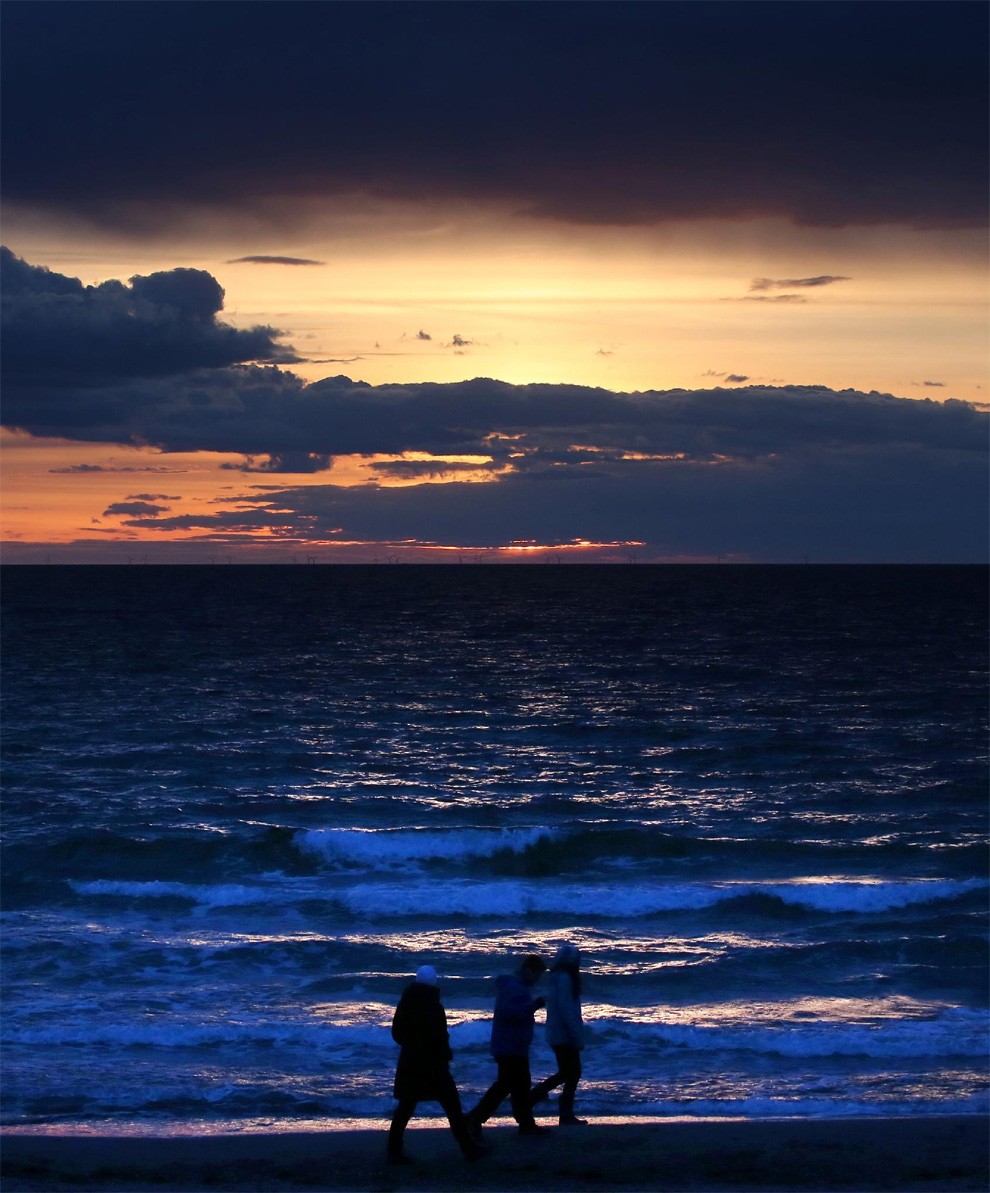 In this picture taken at sunset Sunday April 5, 2015, tourists enjoy a walk on the beach of the German Baltic Sea island of Hiddensee, near Vitte, eastern Germany. (Photo by Bernd Wuestneck/AP Photo/DPA) 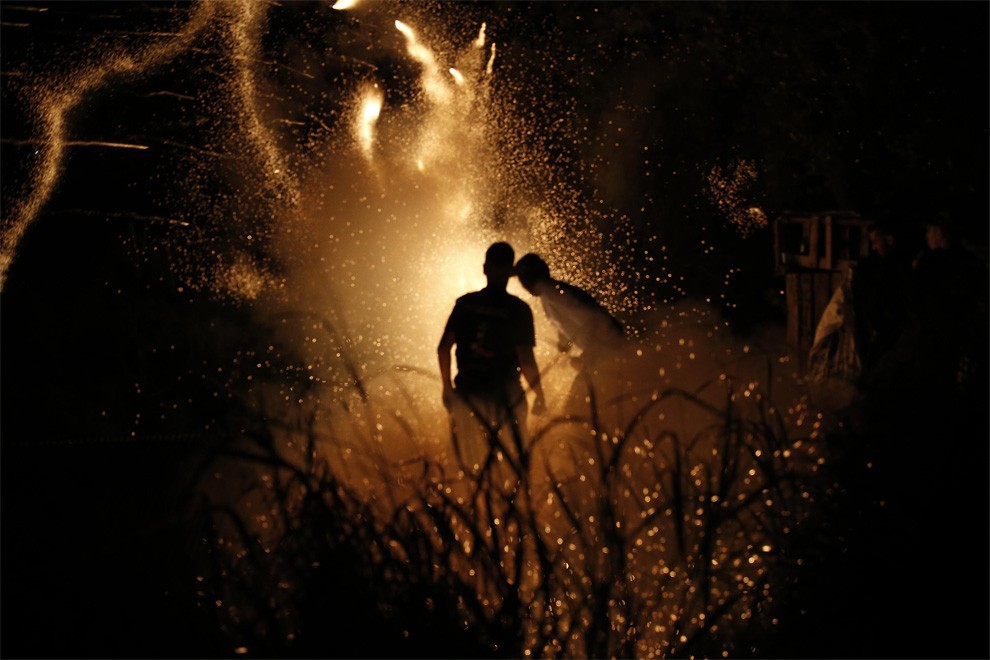 Young men ignite rockets during Greek Orthodox Easter celebrations on the eastern Aegean island of Chios, Greece, late Saturday, April 11, 2015. Thousands of handmade rockets are fired every year on Great Saturday night, before the Resurrection, by locals of the two rival churches of Agios Markos and Panagia Erithiani, in the village of Vrontados. (Photo by Petros Giannakouris/AP Photo) 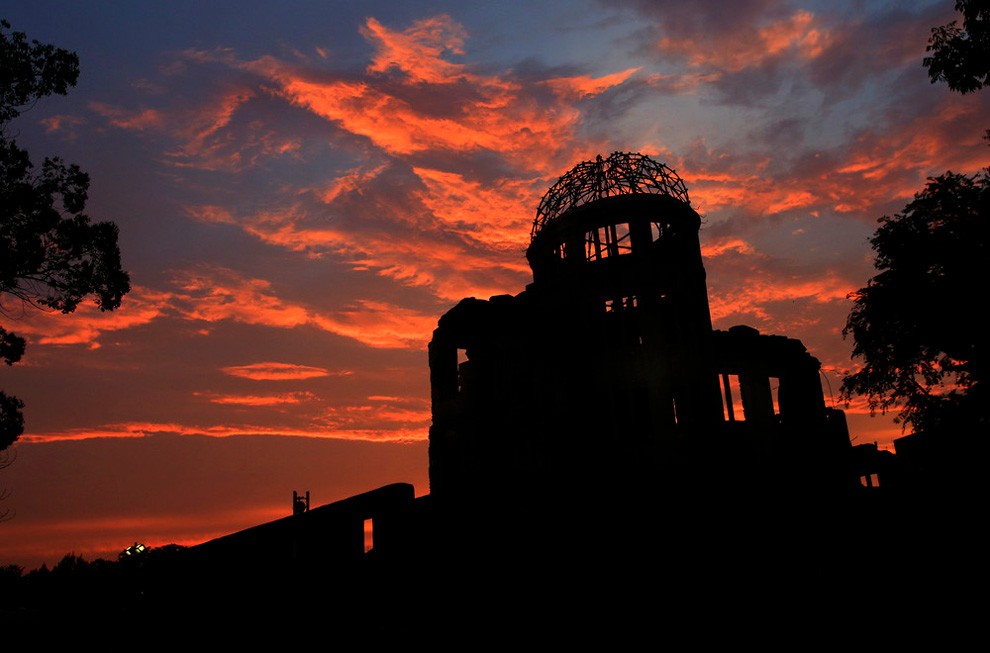 In this August 5, 2013 file photo, the Atomic Bomb Dome is silhouetted at sunset in Hiroshima, western Japan, a day before Hiroshima marks the 68th anniversary of the world’s first atomic bombing. Seventy years after the U.S. defeated Japan in World War II, Americans are divided over Japan playing a more active military role in Asia – and most Japanese are opposed. The results of a Pew Research Center poll released Tuesday, April 7, 2015 in Washington, D.C., come as the two countries are finalizing a revision of their mutual defense guidelines that is expected to expand the scope of Japan’s military activities in the region. (Photo by Shizuo Kambayashi/AP Photo) 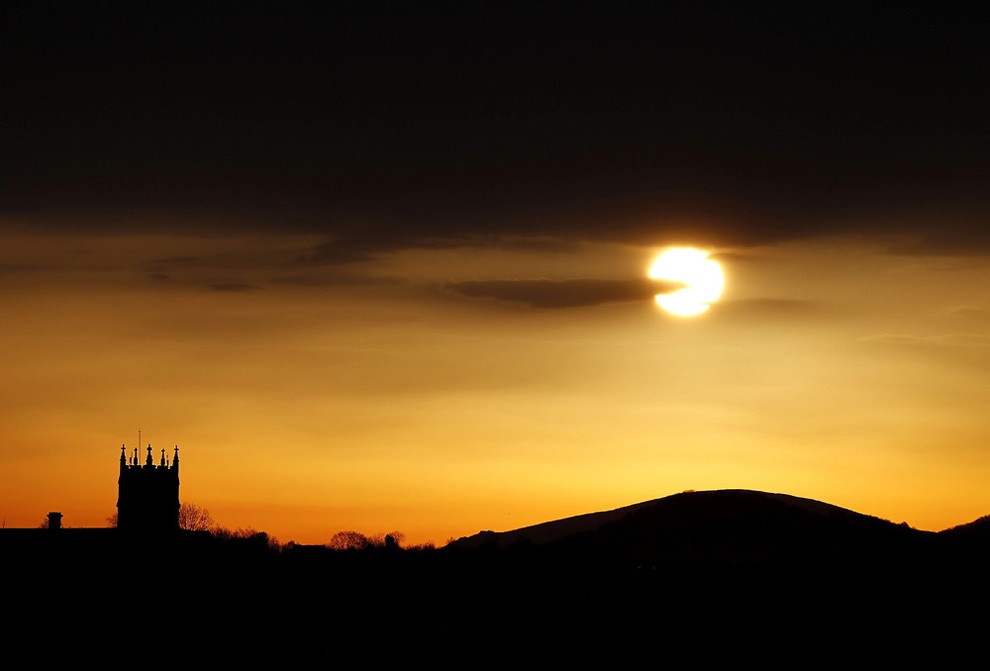 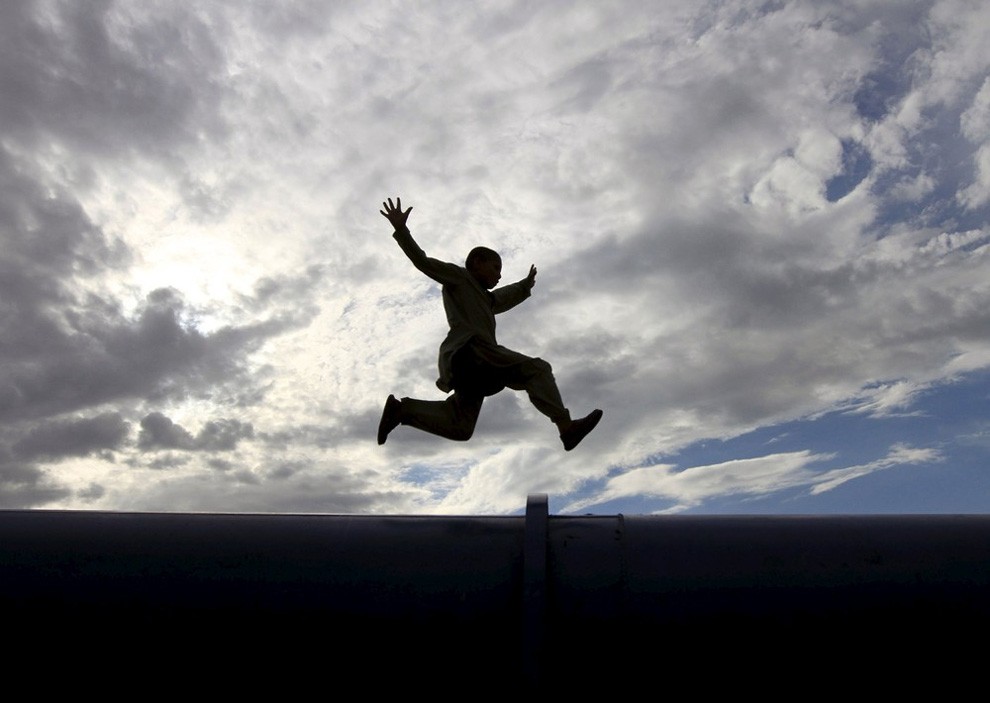 An Afghan boy plays on the outskirts of Jalalabad April 6, 2015. (Photo by Reuters/Parwiz) 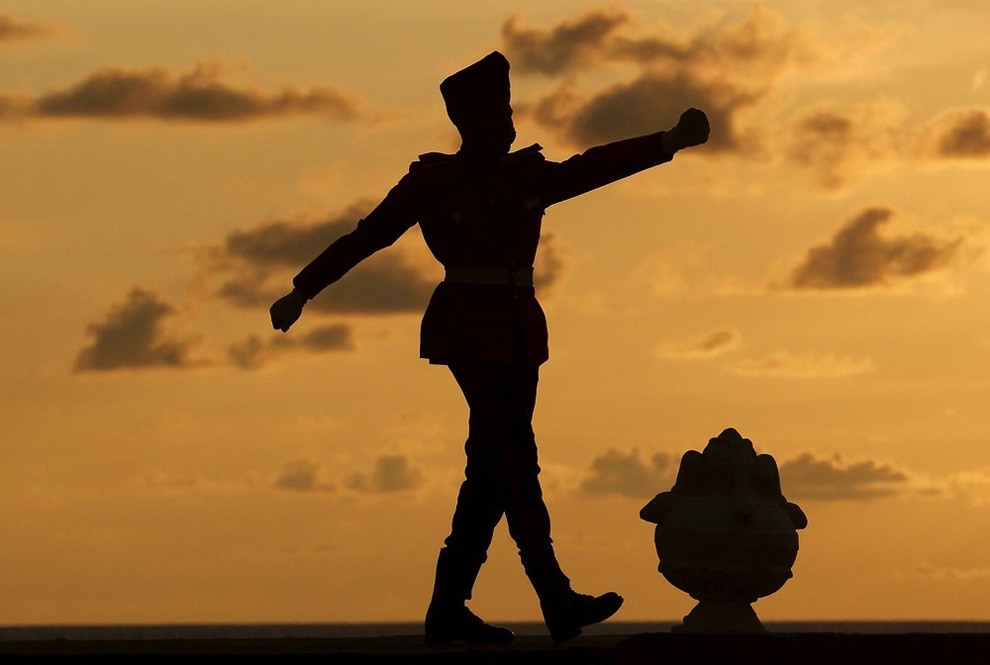 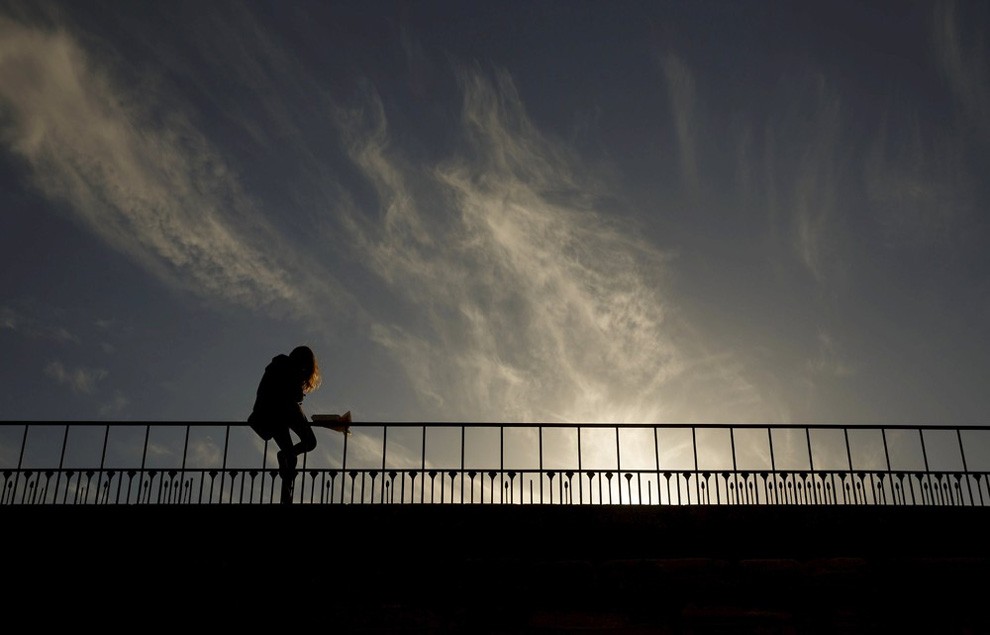 A woman sits on a guardrail as she checks her phone during sunset in a park in Madrid April 7, 2015. (Photo by Sergio Perez/Reuters) 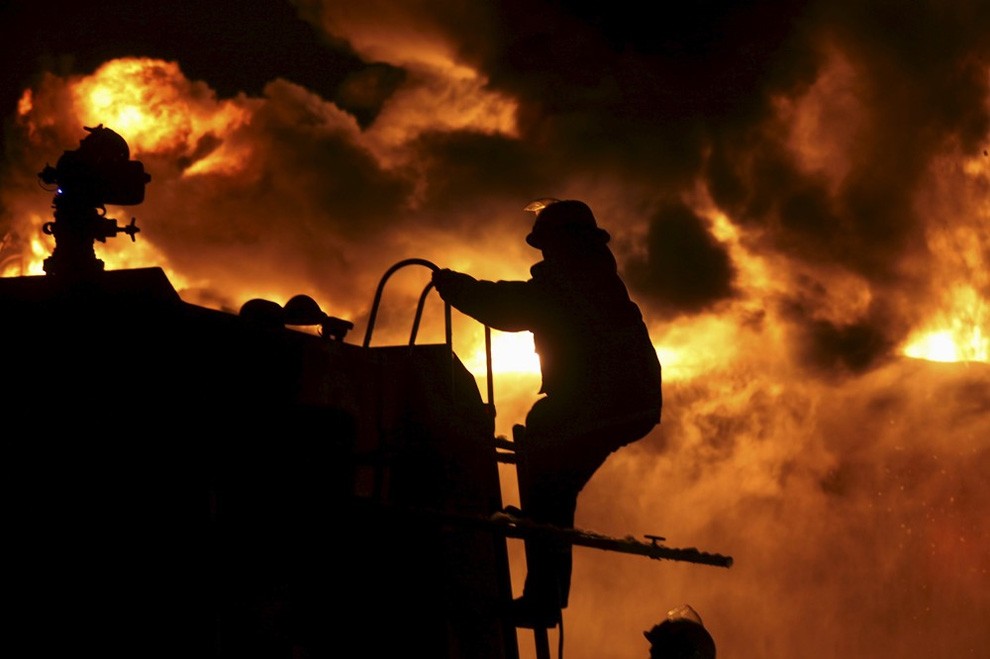 A firefighter climbs onto a fire truck as he and his colleagues try to extinguish a fire at a petrochemical plant in Zhangzhou, Fujian province April 7, 2015. At least six people were injured after an explosion hit part of an oil storage facility on Monday at Dragon Aromatics, Xinhua reported. The fire, which had been put off, resumed at around 7:40 p.m. on Tuesday. It was later extinguished again at around 11:40 p.m., at the plant that produces paraxylene, or PX, a chemical used in making polyester fibre and plastics, state media said. (Photo by Reuters/Stringer) 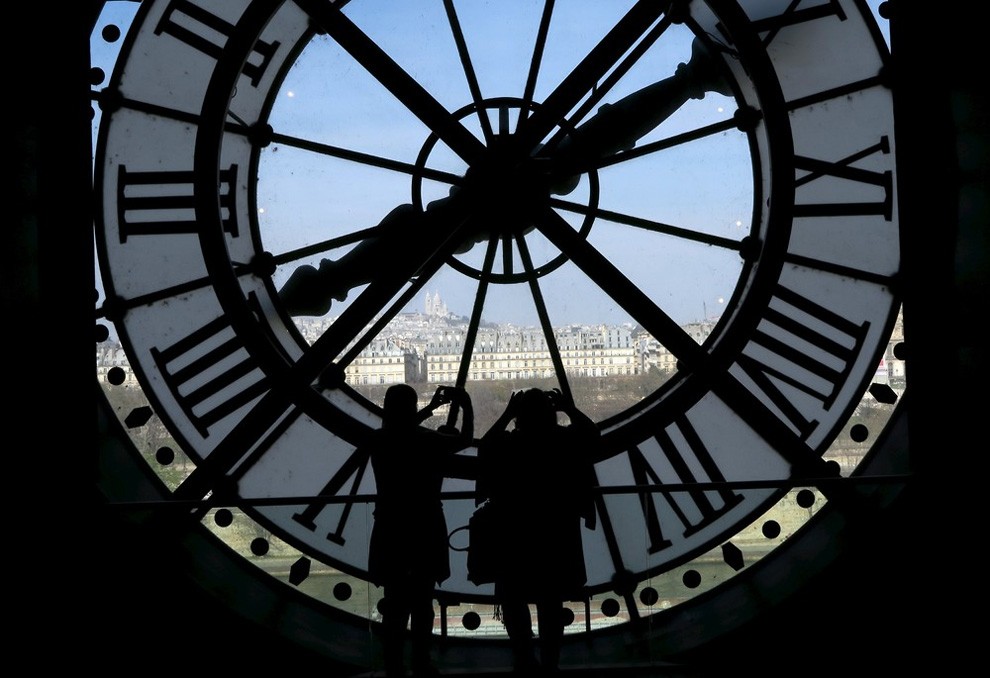 Visitors at the Musee d’Orsay are seen in silhouette as they take pictures from behind a giant clock face at the former Orsay railway station, with a view of the Sacre Coeur Basilica (rear), in Paris April 8, 2015. The national museum of the Musee d’Orsay opened in December 1986 and it displays collections of art from the period 1848 to 1914. (Photo by John Schults/Reuters) 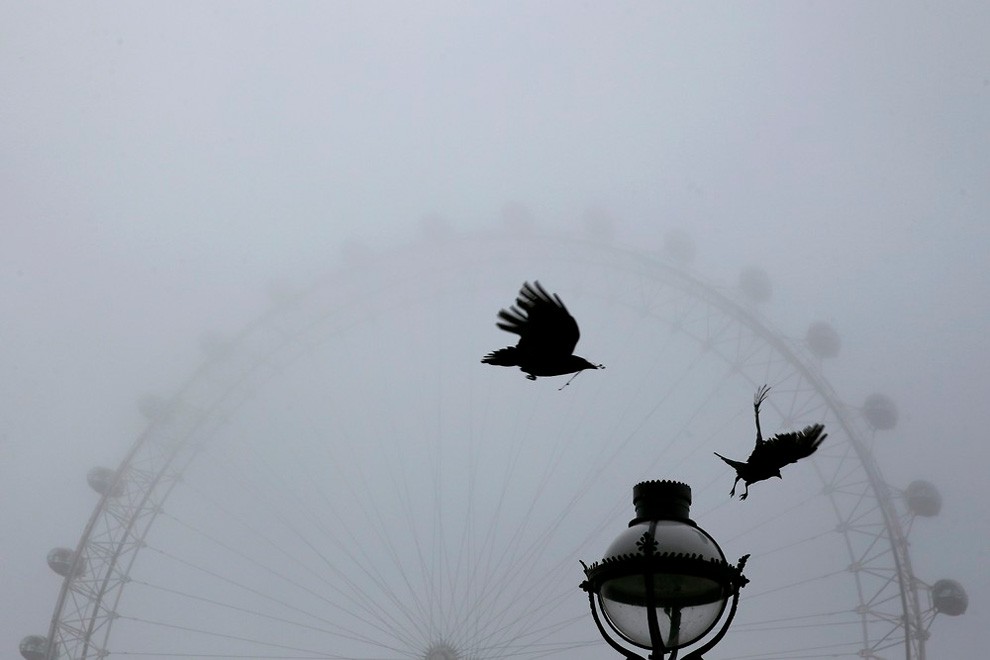 Birds fly past the London Eye on a foggy morning in central London April 9, 2015. (Photo by Stefan Wermuth/Reuters) 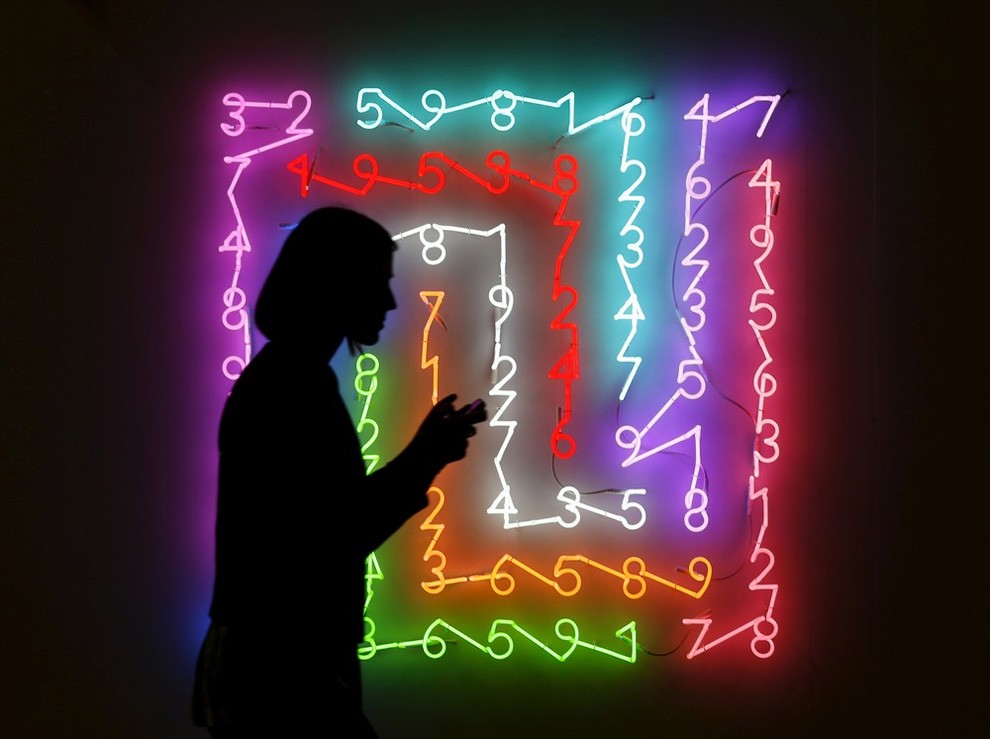 A woman is silhouetted against the neonsystemo “Chaos 13” by German artist Albert Hien at the Art Cologne 2015 fair in Cologne April 16, 2015. (Photo by Wolfgang Rattay/Reuters) 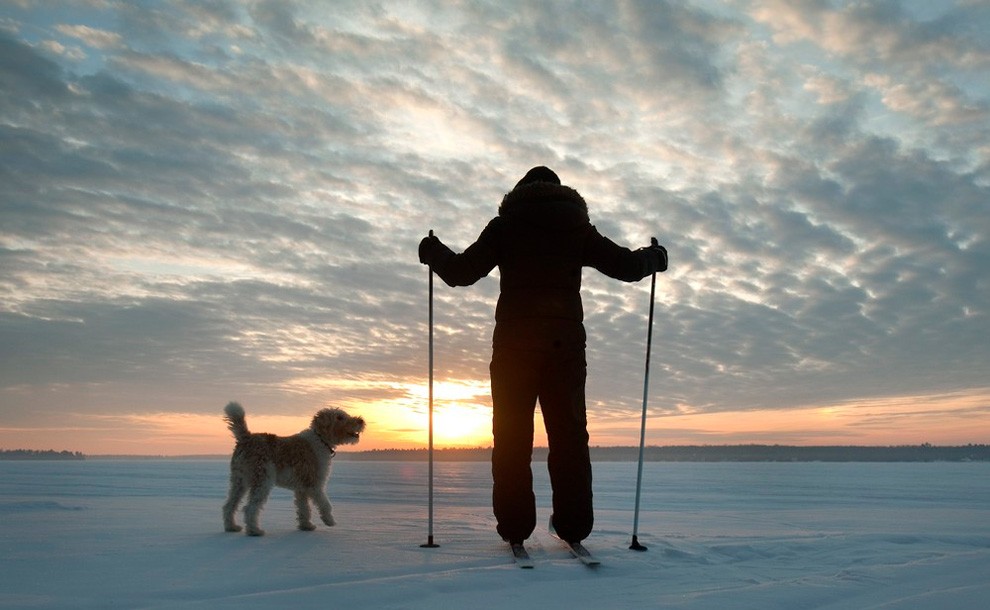 A cross country skier watches as the sun rises with a dog, on a snow covered lake in the Kawartha Lakes region of Ontario in this March 10, 2015 file photo. (Photo by Fred Thornhill/Reuters) 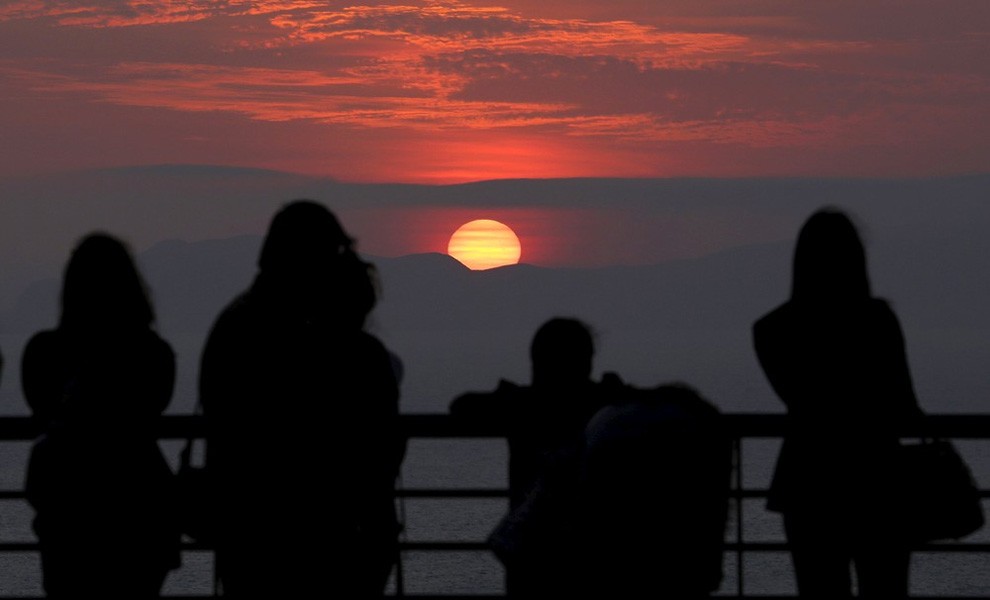 People watch the sunset on a terrace at Larcomar shopping mall in the Miraflores district of Lima April 17, 2015. (Photo by Mariana Bazo/Reuters) 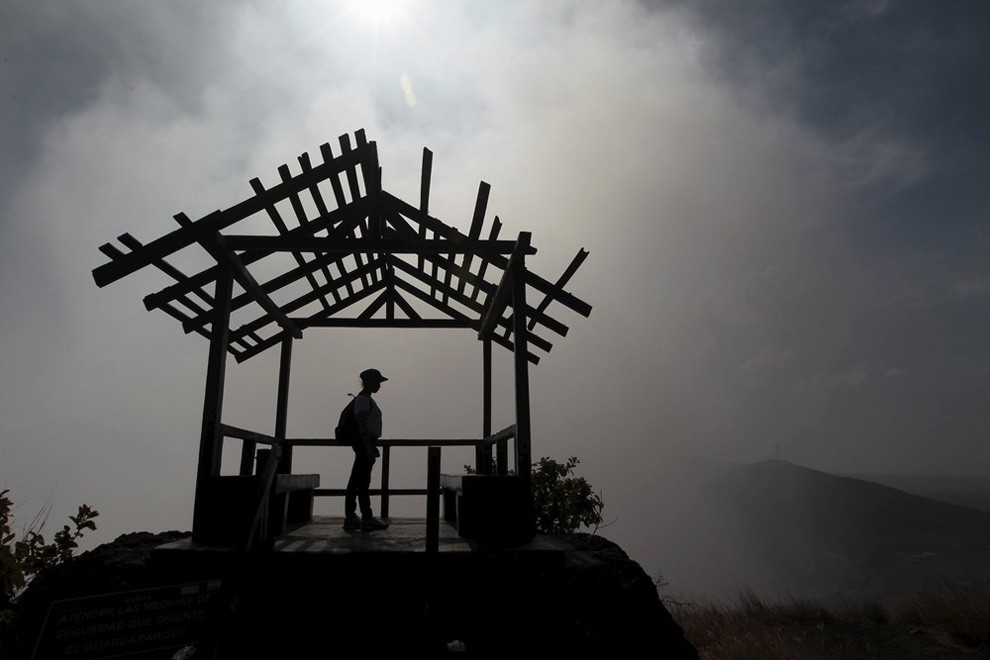 A tourist observes the main crater of the Santiago volcano during a fair at the Masaya National Park April 18, 2015. The national park held the fair to commemorate Earth Day which falls on April 22. (Photo by Oswaldo Rivas/Reuters) 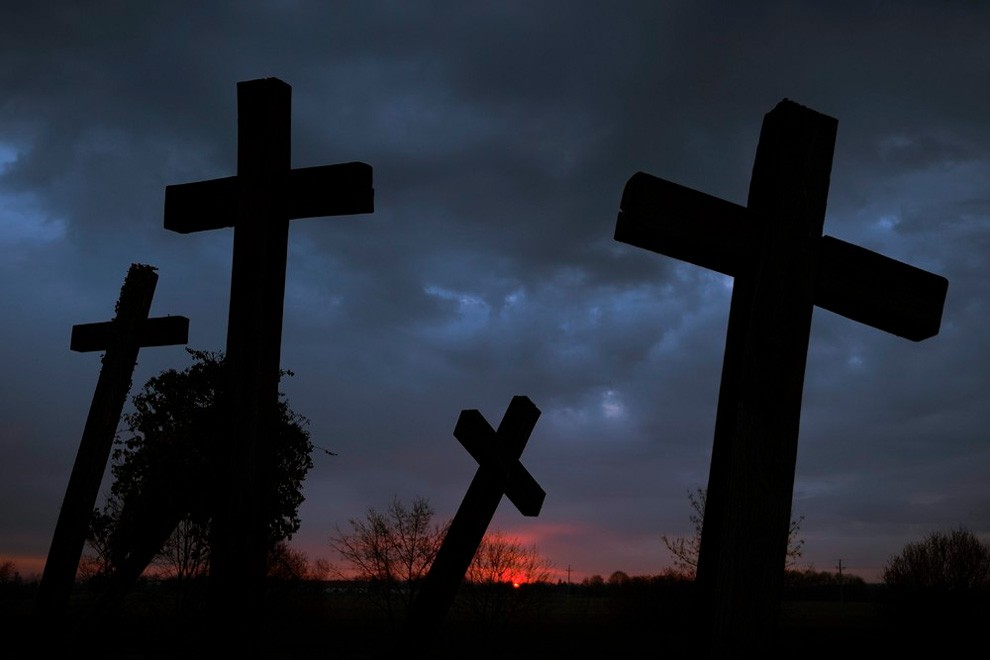 Crosses at a war memorial stand in front of the dawning sky at Muhi, 167 kms northeast of Budapest, Hungary, on Easter Sunday, April 5, 2015. (Photo by Zsolt Czegledi/AP Photo/MTI) 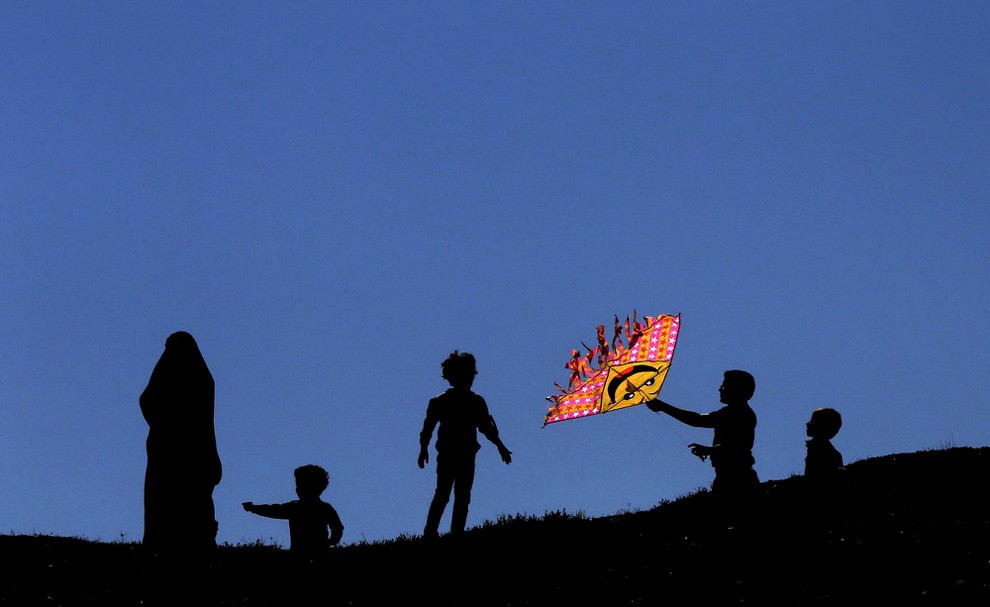 An Iranian boy flies a kite during the ancient festival of Sizdeh Bedar, an annual public picnic day on the 13th day of the Iranian new year, at the Pardisan Park in Tehran, Iran, Thursday, April 2, 2015. Iranians flocked to parks and wilderness on Thursday to mark the ancient festival, a legacy from pre-Islamic era, in the last day of Persian New Year holidays. Sizdeh means 13 and Bedar means day out in Persian and it is believed unlucky to stay indoors on Sizdeh Bedar which means getting rid of number 13. Unlike other countries in the Middle East, Iranians follow the Persian solar year, which begins on the first day spring. On March 21 this year, Iran began the year 1394. (Photo by Vahid Salemi/AP Photo) 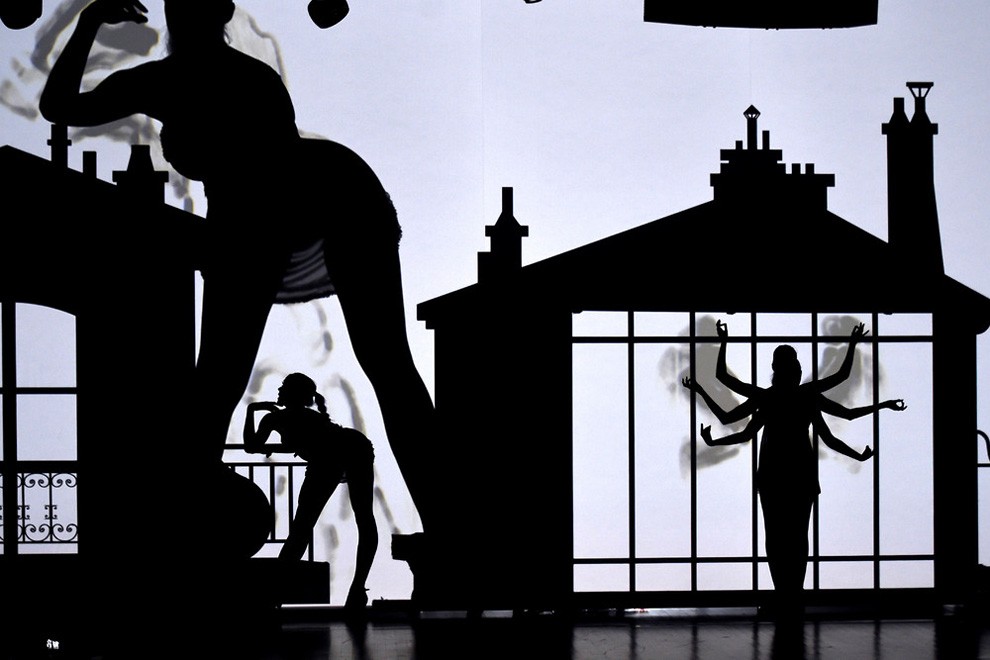 Dancers perform during a general rehearsal of “Paris Merveilles”, the new revue of the Parisian cabaret the Lido directed by Italian-Belgian theatre director Franco Dragone, at the Lido in Paris, on April 2, 2015. (Photo by Loic Venance/AFP Photo) 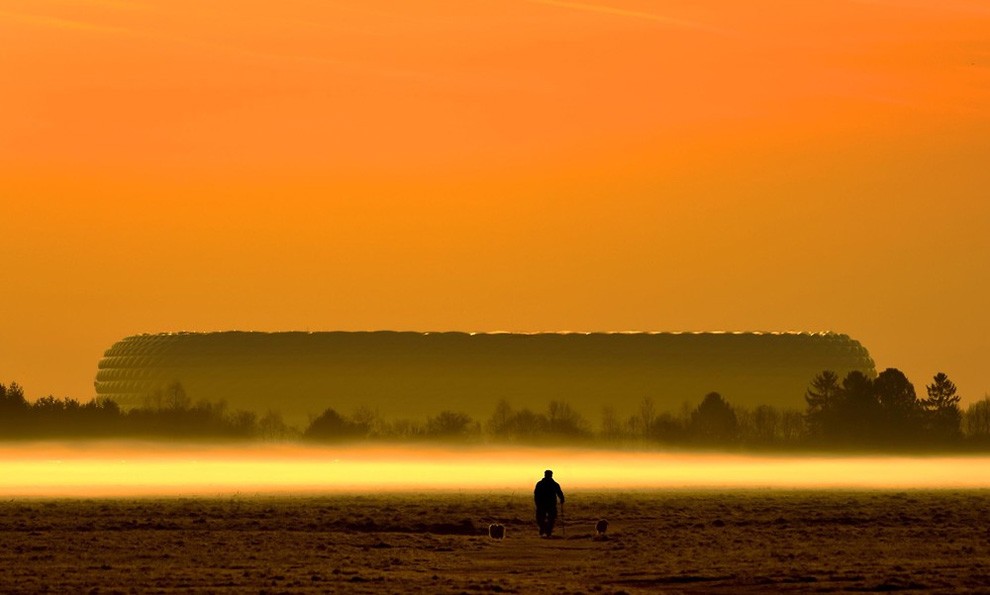 A man is silhouetted in front of the Allianz-Arena as he walks his dogs at sunrise in Munich, southern Germany, Friday, April 10, 2015. (Photo by Peter Kneffel/AP Photo/DPA) 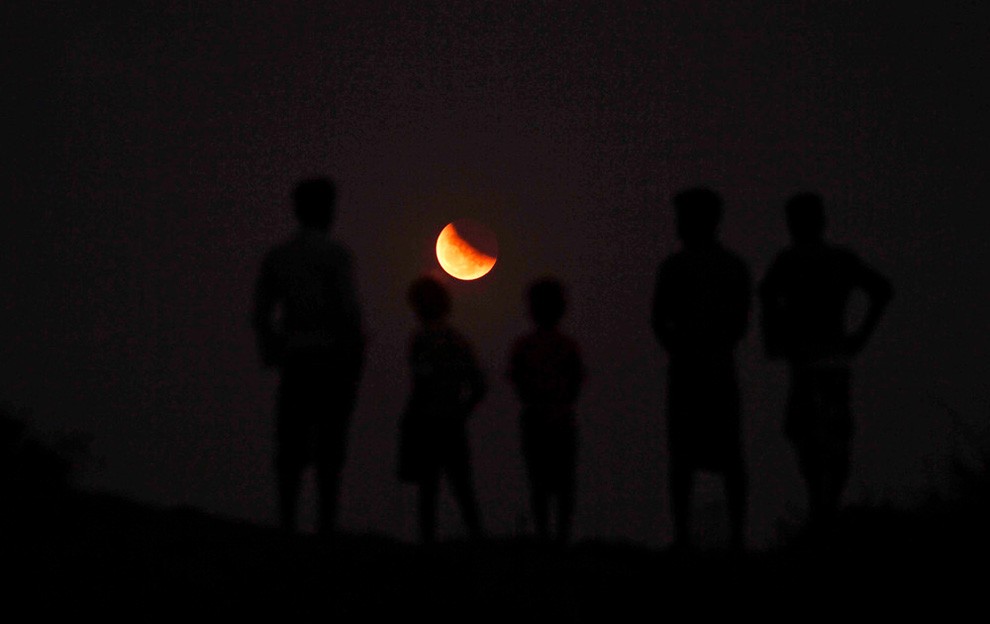 Indians watch a lunar eclipse from the banks of River Kuakhai on the outskirts of Bhubaneswar, India, Saturday, April 4, 2015. (Photo by Biswaranjan Rout/AP Photo) 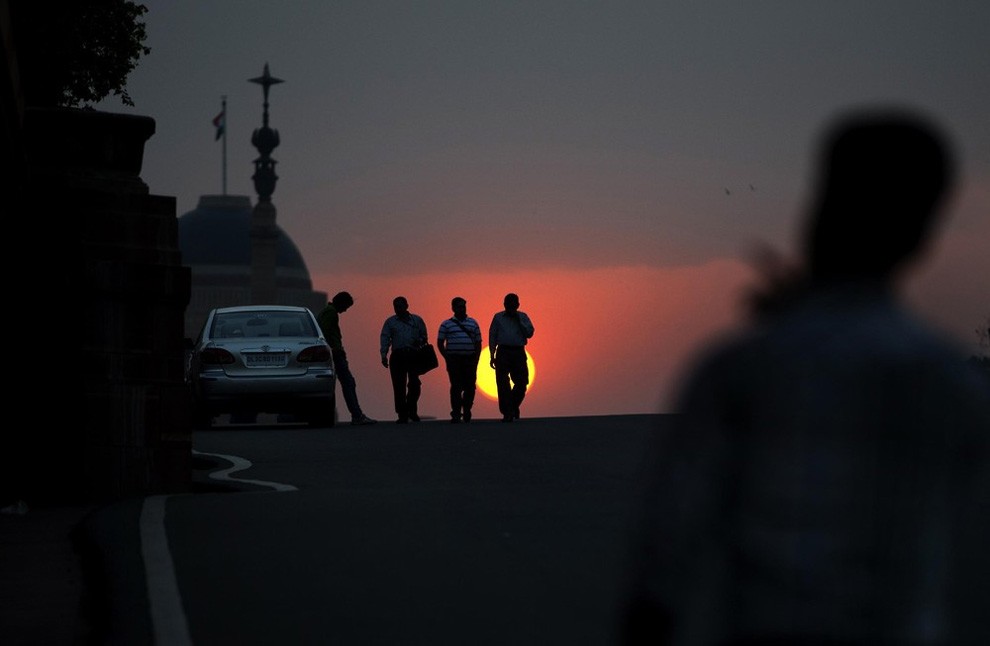 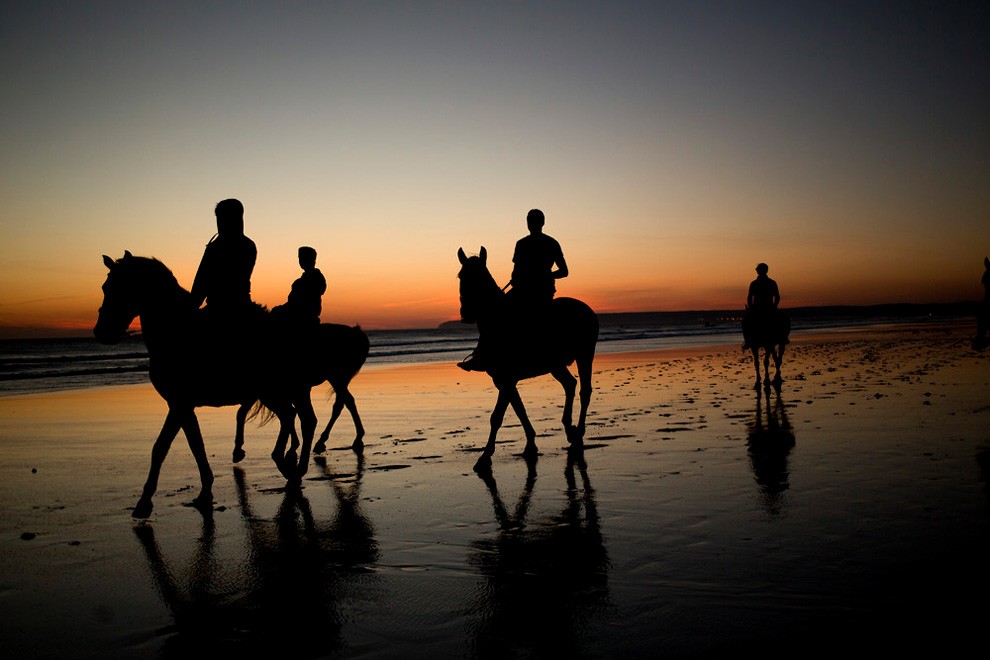 Tourists ride horses along the beach as the sun sets in Cadiz the south of Spain, Wednesday, April 1, 2015. (Photo by Emilio Morenatti/AP Photo) 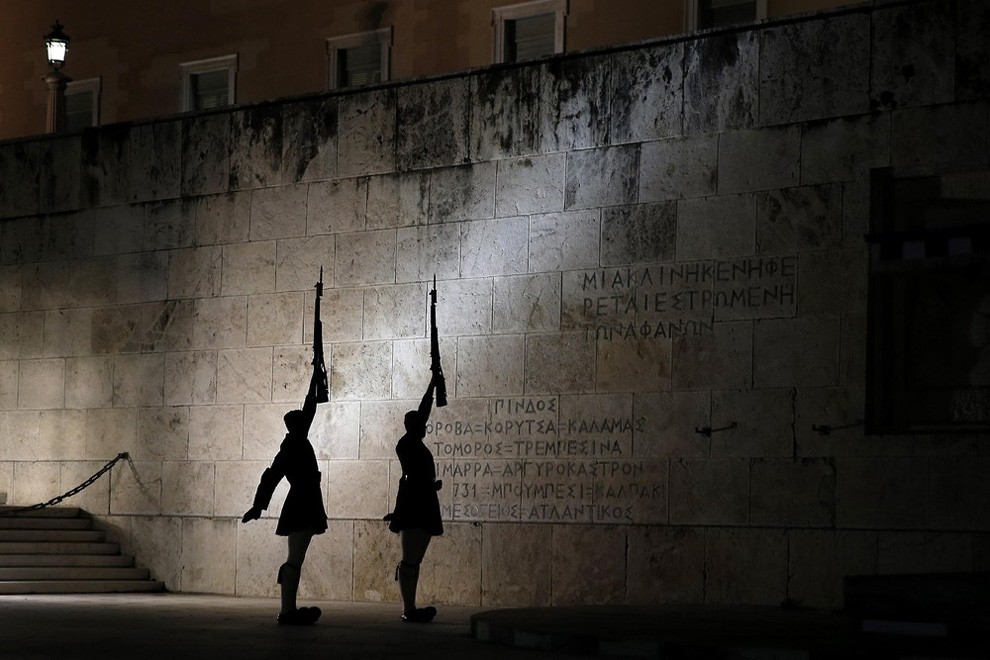 Presidential guards perform during a changing of the guard ceremony, at the tomb of the unknown soldier, in front of the Greek parliament in central Athens, Monday, April 6, 2015. (Photo by Petros Giannakouris/AP Photo) 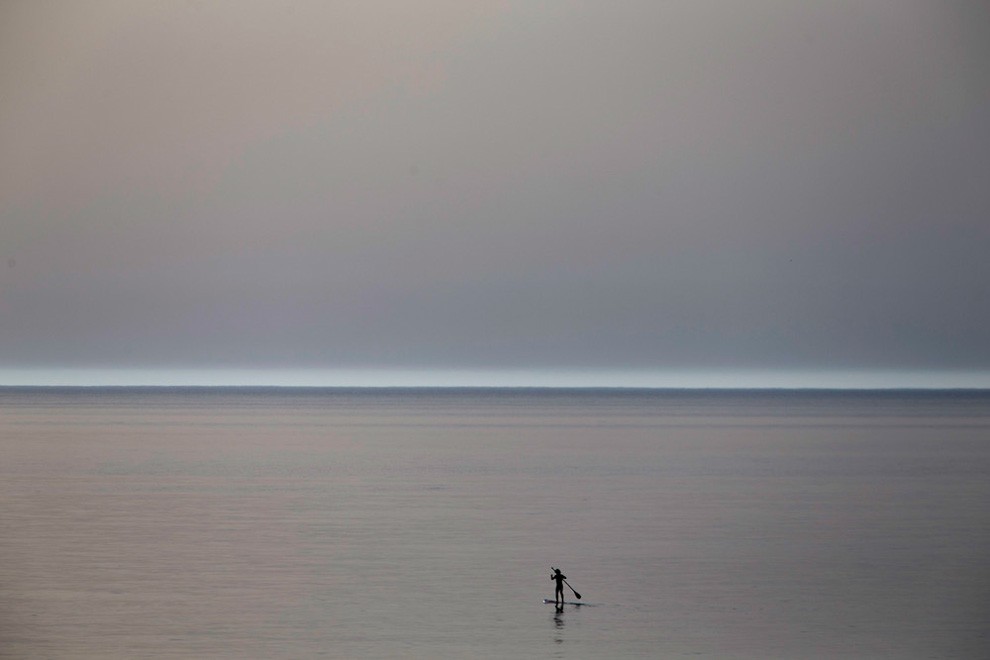 A surfer paddles in a peaceful and quiet Mediterranean sea near Beit Yanai, Israel, Tuesday, April 7, 2015, during the Passover holiday on a warm spring day. (Photo by Ariel Schalit/AP Photo) 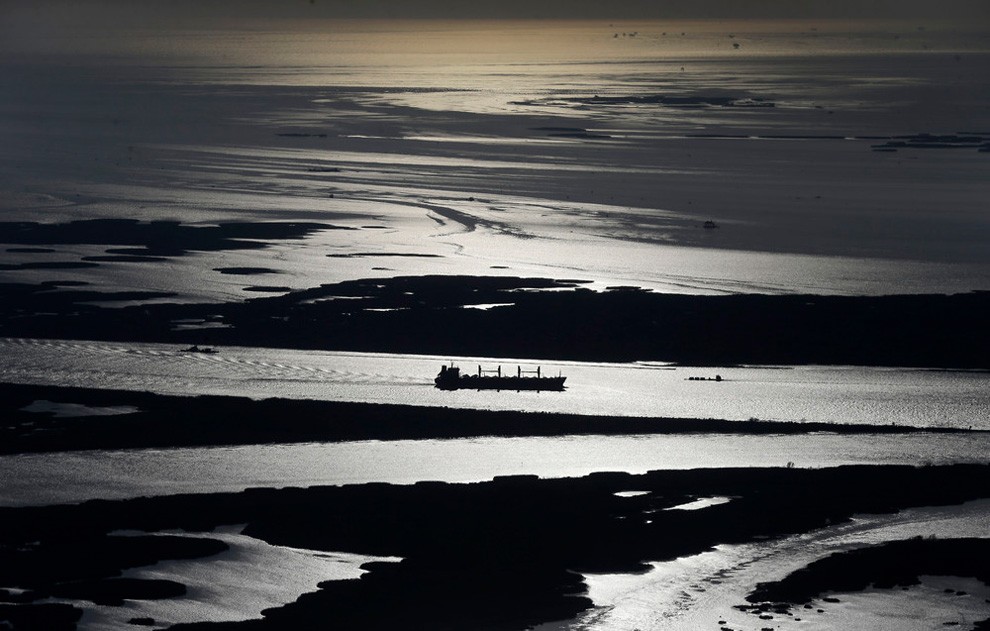 In this Tuesday, March 31, 2015 aerial photo, a cargo ship plies up the Mississippi River towards New Orleans in Plaquemines Parish, La. (Photo by Gerald Herbert/AP Photo) 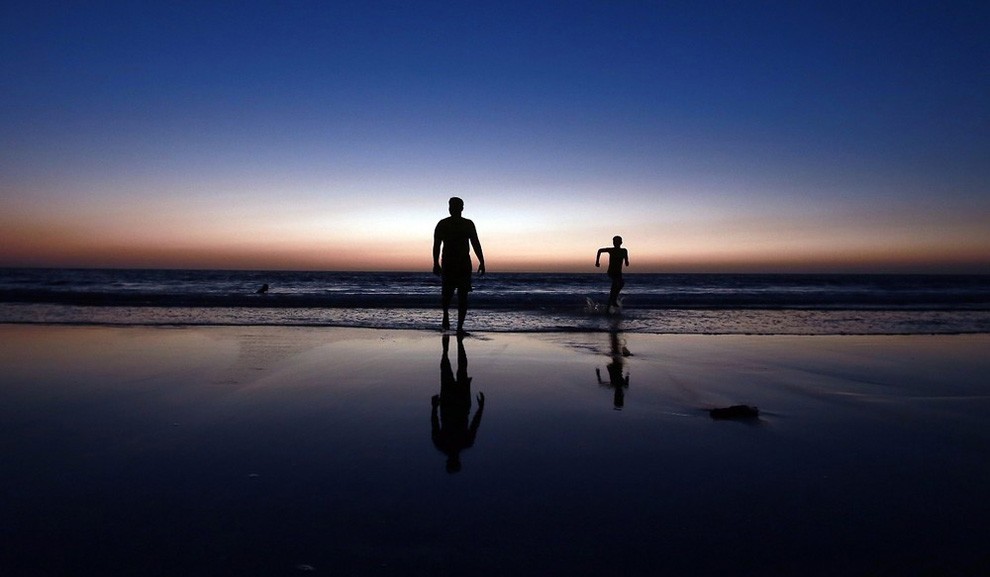 Indian youngsters enjoy the final moments of sunset on the beach along the Arabian Sea coast in Mumbai, India, 31 March 2015. (Photo by Divyakant Solanki/EPA) 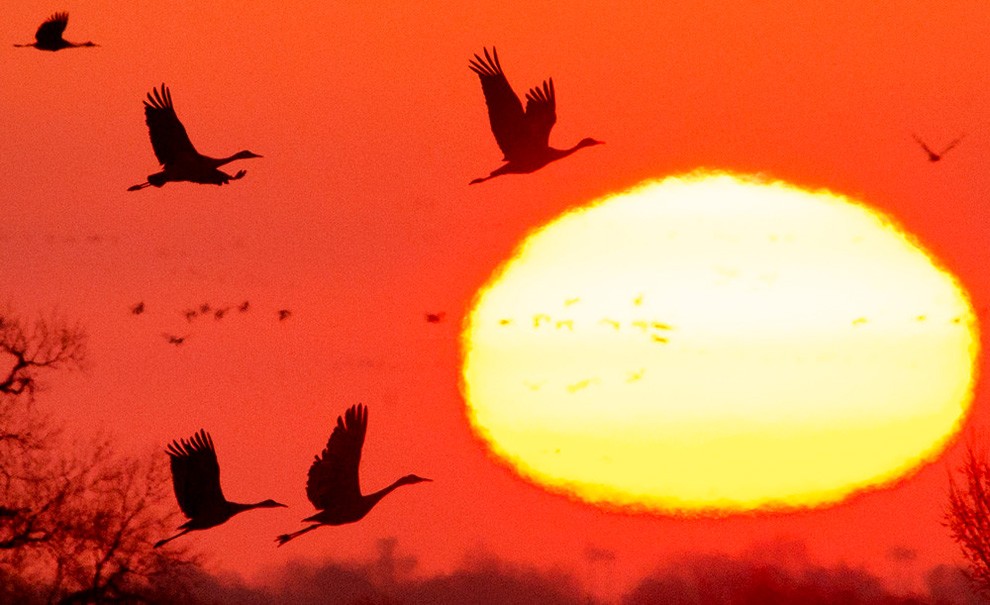 SPKSMEN Campaign, Spring '11
The Washington Post Travel Photo Contest: Animal Photos
Hottest And Most Grooviest Photos From The Past That Will Redefine Your Style Statement
This Photographer Captured 130 Images Showing The Stunning Beauty Of Redheads
Explore Neon-Lit, Cyberpunk Moscow Suburbs With This Bladerunner-Inspired Photographer
The Serendipitous Clouds And Faux Reflections Of Photographer Kanghee Kim
Ralph Lauren’s ‘Very British’ Collection at 2012 New York Fashion Week Finale
Photographer Shows The Power Of Perspective With His Stunning Humorous Pictures
Colombian Salsa Dancers
This Photo Was Shot with A Real $2M Lamborghini Taken Apart
Beautiful And Never Seen Vintage Soviet 'Antonov' Plane Ads
"Moments Around the World": Amazing Cinematic Travel and Street Photography by Billy Dinh
"Cats And The City": Russian Artist Imagines A World Where Humans Live Among Giant Cats
This Is What Iranian Women Looked Like In The 1970s
Bearded Man Playfully Poses For Pin-Up Calendar To Raise Money For Children's Charity
"To See Paris And Die": These Photos Compare Paris And Its Detailed Chinese Replica
World Press Photo 2021: Outstanding Images Nominees For Photo Of The Year
This is How You Photograph Giant Waves Crashing on a Beach
Photographer Recreates Iconic Photos With John Malkovich As The Main Subject
Moody And Cinematic Street Photography By Alex Fernández
"I Want to Believe": Fantastic Rare UFO Photographs by Billy Eduard Albert Meier
This Photograprer Has Captured A Bunch Of Little Caesar’s Pizza Pies In Unusual Locations And Situations Throughout LA
Lovely Rainy Day Photos That Look Like Oil Paintings
Russian Photographer Takes Portraits With Real Animals And People Say Her Works Look Like They’re Straight From A Fairy Tale
Lunar Eclipse December 2011: Dazzling Images of the Eclipse Around the World
Photos of SpeedWeek on Utah’s Bonneville Salt Flats
Couple Travel To Iceland With A Full Crew For Pre-Wedding Shoot Atop Volcanic Rocks And Glaciers
Pregnant Woman Poses With 20,000 Live Bees For Crazy Maternity Photoshoot
59th World Press Photo Contest Winners
Mystery of 'Lady in Red' Who Appeared in Mervyn O'Gorman's 1913 Colour Photos
around, silhouettes, world