Photo of the Day: “I Am Your Father” 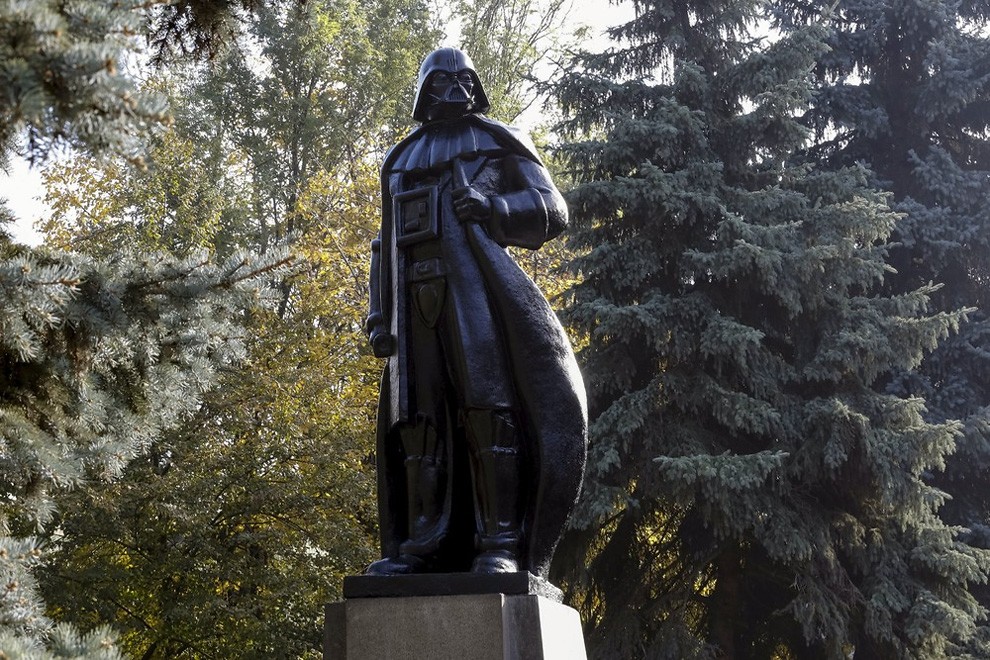 A monument to the character of Darth Vader from “Star Wars”, which was rebuilt from a statue of Soviet state founder Vladimir Lenin, is seen in Odessa, Ukraine, October 23, 2015.

The Internet Party of Ukraine’s main candidate, a person named for the legendary “Star Wars” villain Darth Vader, campaigned in Odessa, cruising through town on a black van to the sound of Imperial March from “Star Wars” saga. (Photo by Yevgeny Volokin/Reuters)

2020 Miss Mexico Contestants Compete In Traditional Outfits And They Are Amazing
The Surfing Trooper
Unseen Photos of the 1965 Rolling Stones
This Guy Photoshops His Dog Into A Giant In All His Pics And It’s Hilarious
The Cutest Panda Ever
Stunning Photographs Taken by Surfer Who Lost His Leg in Shark Attack
Mysterious Jupiter Up Close Looks Like A Van Gogh Painting
"Life is Good": Sensual Close-Up Photography by Alisa Karin
Photographer Dana Lixenberg’s 22-Year-Long Series In One Of LA’s Oldest Housing Projects
Cruising Van Nuys Boulevard In The Summer Of 1972 In Stunning Black And White Photos By Rick McCloskey
Photographer Scott Chasserot Shows How Brain Scans Can Reveal Our Ideal Self-Image
Stunning Painting-Like Photography Shows Off The Beauty Of Rainy Season In Japan
Surreal Stretched-Out And Rearranged Portraits By Sakir Yildirim
Fabulous Vintage Photos Showing The Amazing Women’s Street Style From The 1920s
Cool Old Photos Show What School Looked Like In The 1970s
“Being Michael Jackson”
A Photographer's Aerial Photos Of Parked Planes Show Just How Far The Airline Industry Has Fallen During The Lockdown
Photographer Explores the Beautiful Diversity of Redheads
Photographer Challenges Herself To Shoot In ‘Ugly’ Location, And Results Prove That It’s All About The Skill
The Ginger Project: Photographer Took Portraits To Fight Against Red-Head Discrimination
Burnouts by Simon Davidson
Moody And Cinematic Street Photography By Panagiotis Koutroumpis
Gaze Into the Eyes of Animals Through Stunning Macro Shots
The Best Photographers Of 2021 FdB Wedding Photo Awards
Stunning Aerial Photos Of The Beautiful Planet Earth From Space
Beautiful Vintage Color Photos of Holidaymakers at Southend-on-Sea in 1953
Spectacular Winning Photos From The Minimalist Photographer Of The Year 2020
Stunning Finalists Photos Of London Street Photography Festival
"Tokyo Compression": These Images Of Japanese Commuters Are Not For The Claustrophobic
A Photographer Is Using A Unique Method To Show The Shift From Day To Night Across Famous Cities In Spectacular Images
father, photo