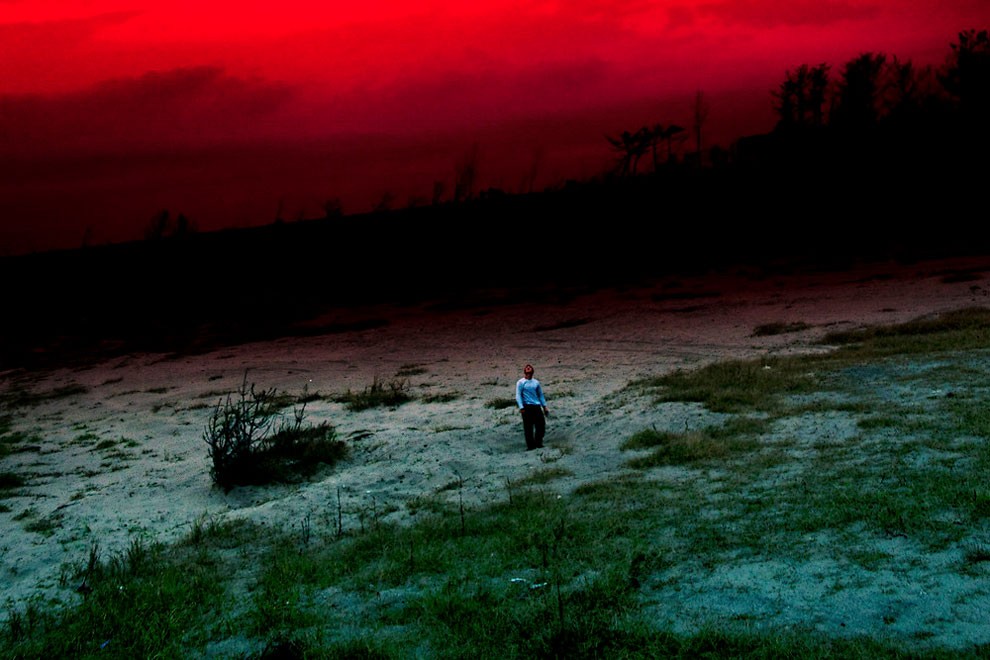 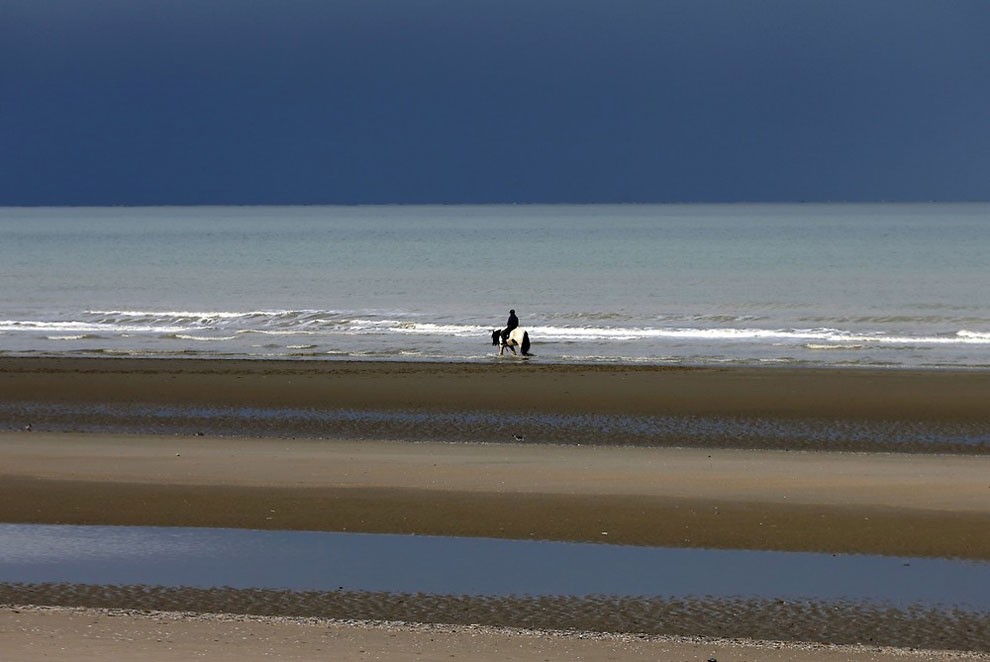 A man rides a horse along a beach in the seaside town of Zeebrugge, Belgium, February 24, 2016. (Photo by Francois Lenoir/Reuters) 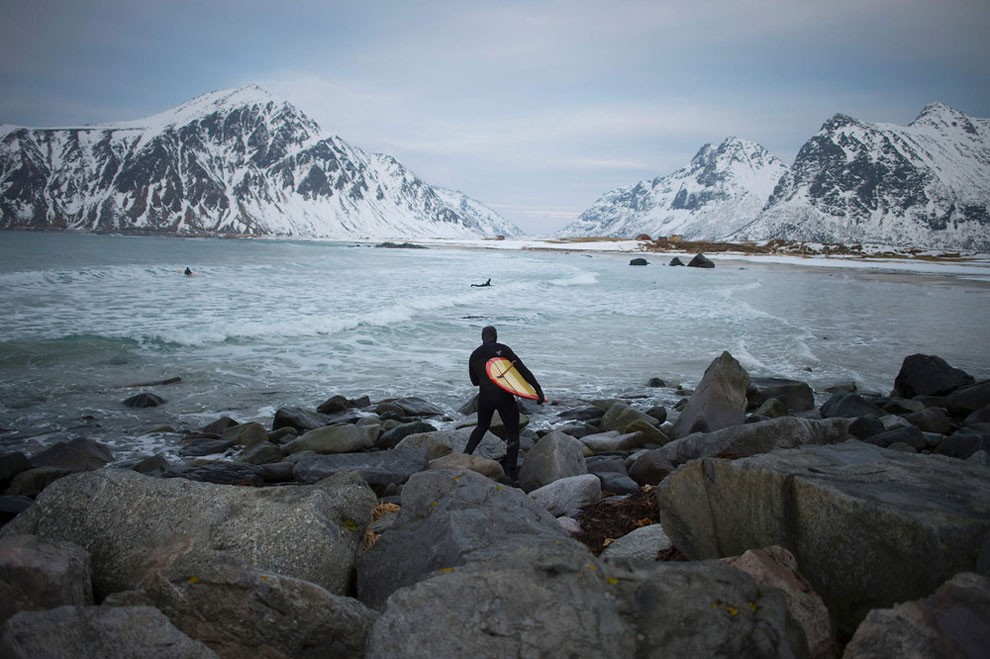 A man goes to surf at the snowy beach of Flackstad, near Ramberg, in Lofoten archipelago, Arctic Circle, on March 12, 2016. (Photo by Olivier Morin/AFP Photo) 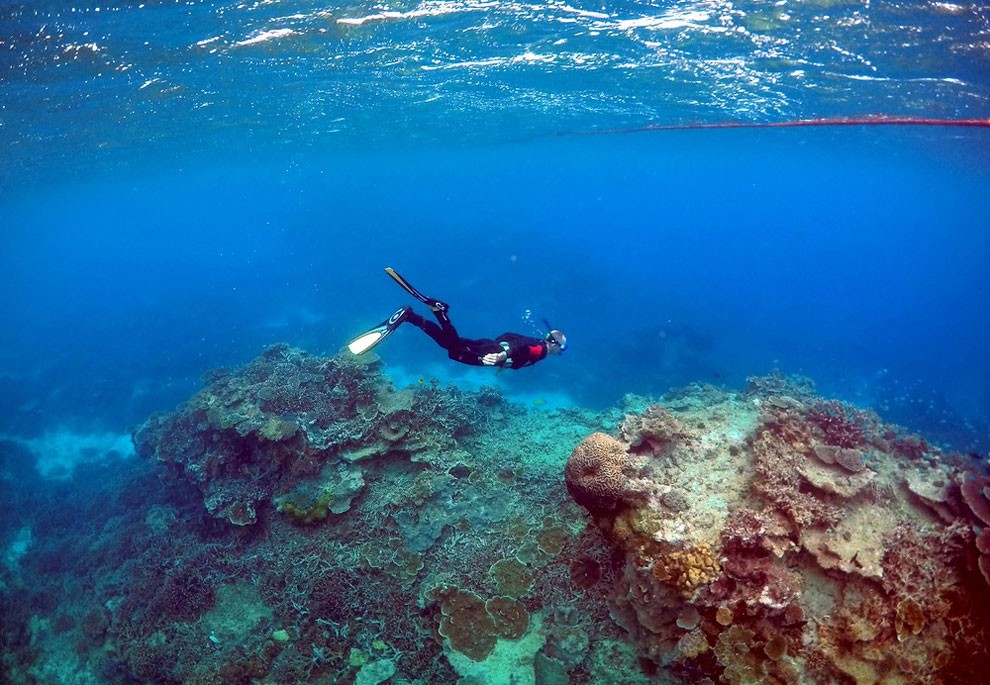 Peter Gash, owner and manager of the Lady Elliot Island Eco Resort in the Great Barrier Reef area, snorkels during an inspection of the reef’s condition in an area called the “Coral Gardens” located at Lady Elliot Island, Australia, in this June 11, 2015 file photo. (Photo by David Gray/Reuters) 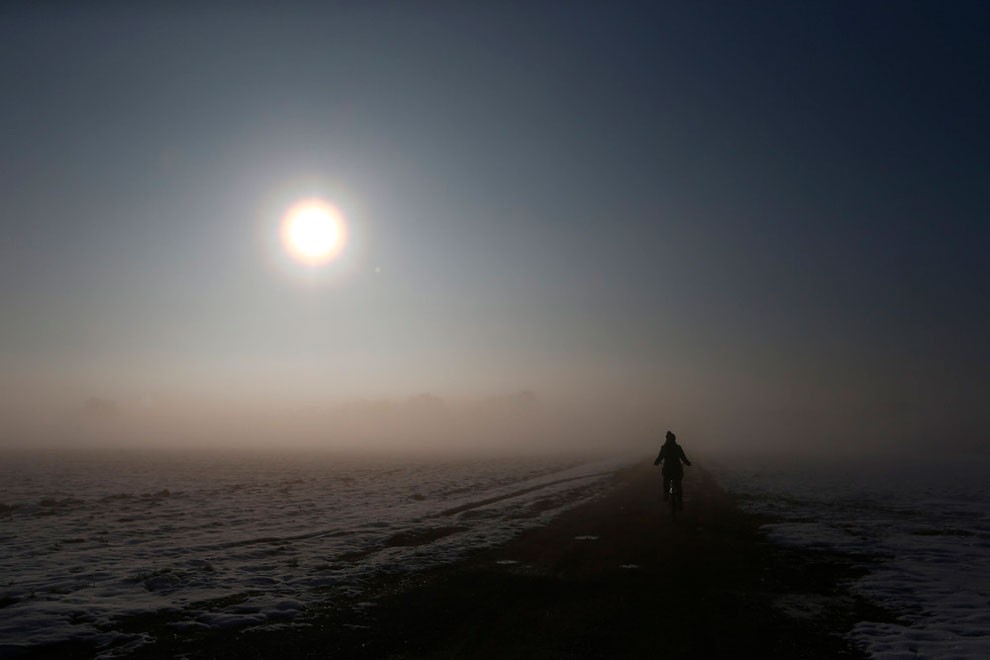 A bicyclist is seen in the early morning hour in Olching westward of Munich, Germany, February 26, 2016. (Photo by Michaela Rehle/Reuters) 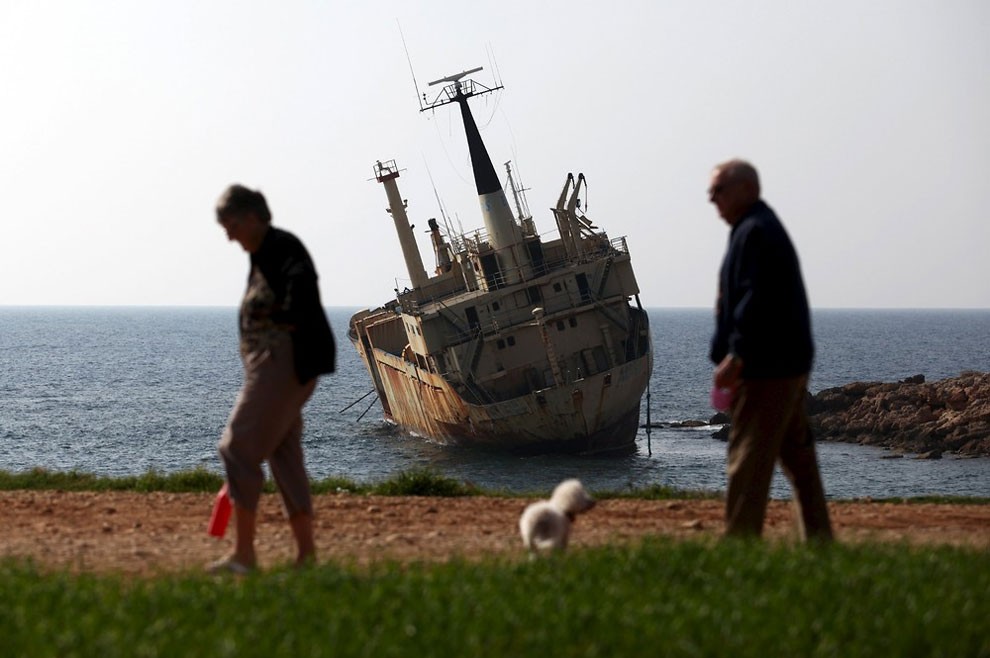 Tourists walk near a shipwreck in the coastal village of Pegeia, Cyprus February 28, 2016. (Photo by Yiannis Kourtoglou/Reuters) 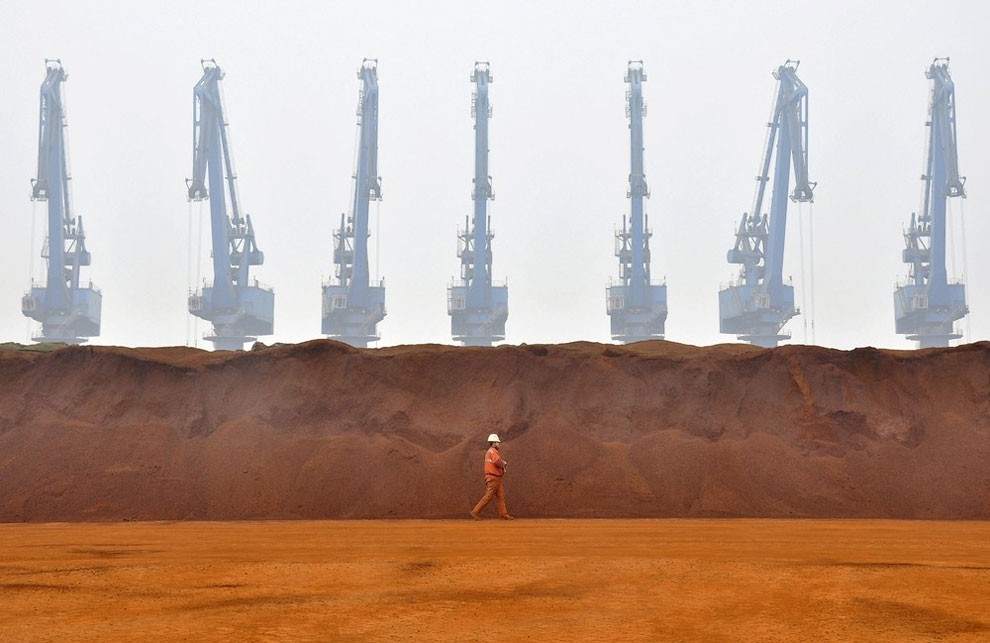 A worker walks past a pile of iron ore from Australia at a port in Tianjin municipality in this March 29, 2010 file photo. (Photo by Vincent Du/Reuters) 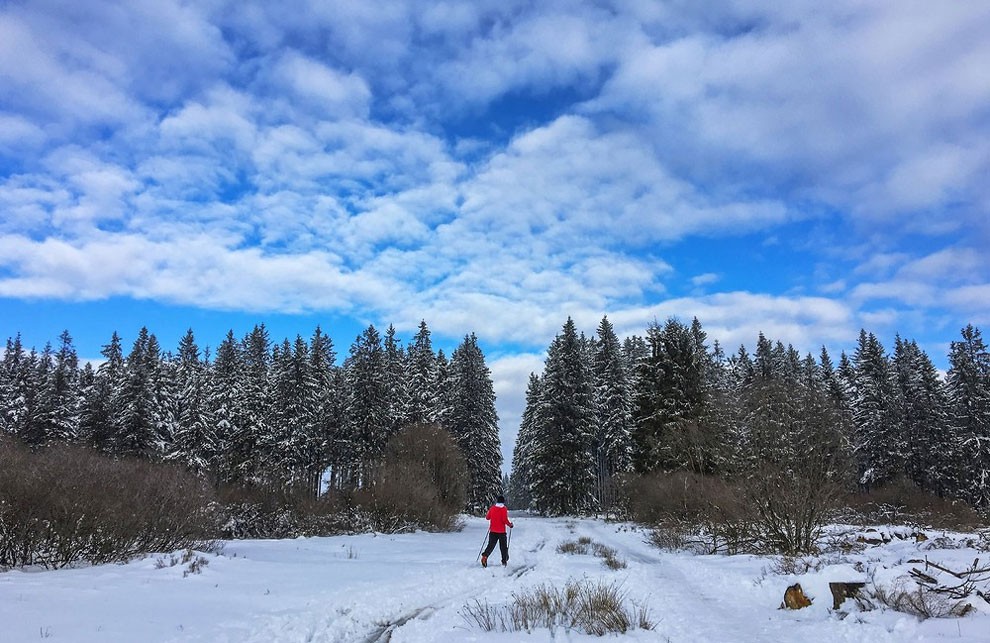 A man skis in Botrange, in the nature reserve of Les Fagnes, Belgium March 5, 2016. (Photo by Yves Herman/Reuters) 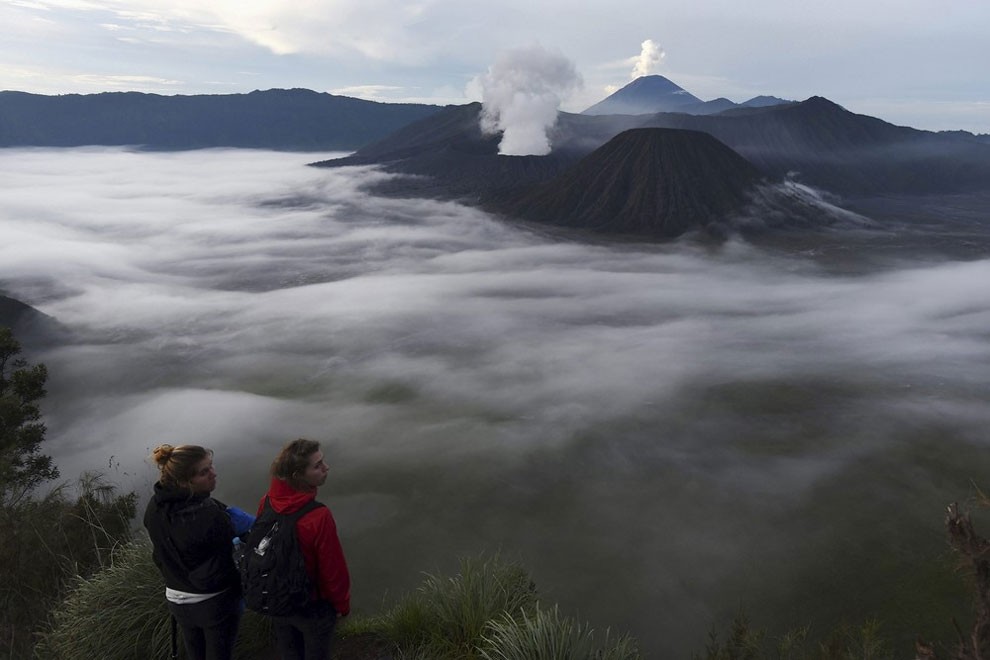 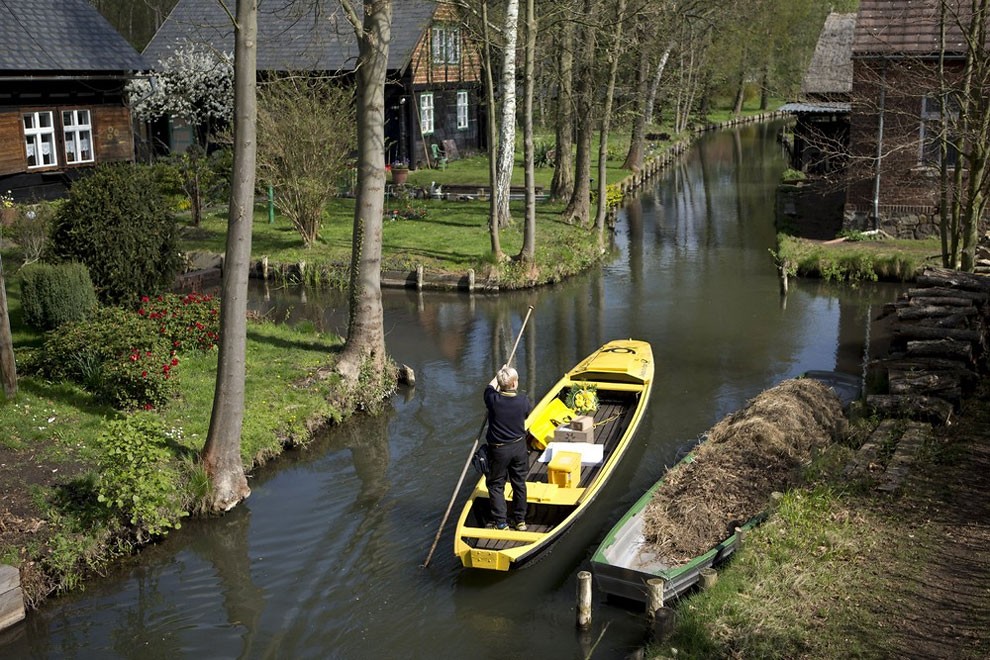 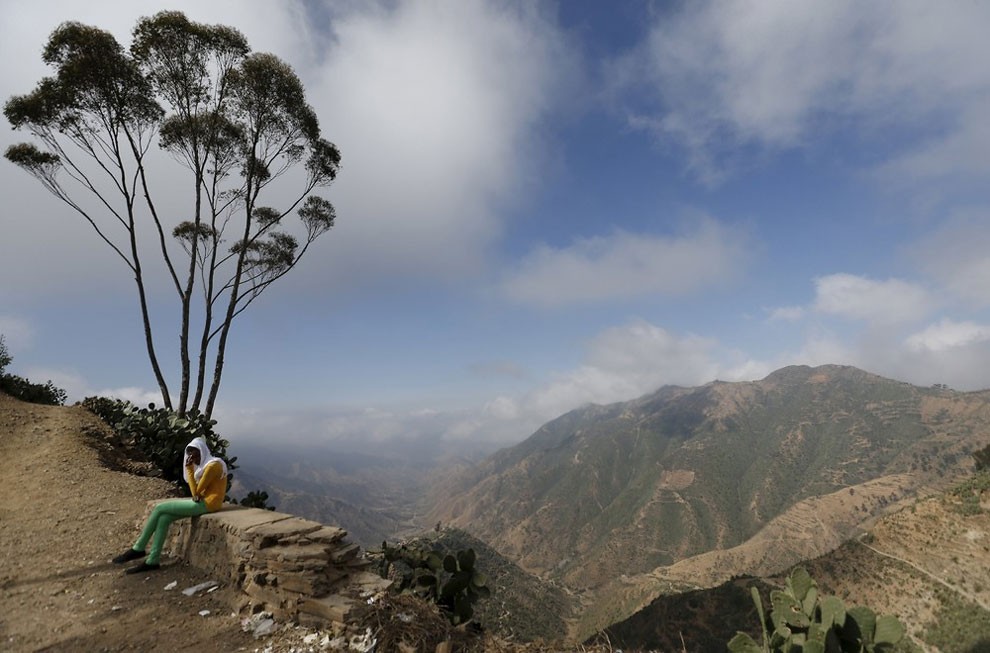 A woman sits next to an escarpment on the outskirts of Asmara, Eritrea, February 20, 2016. (Photo by Thomas Mukoya/Reuters) 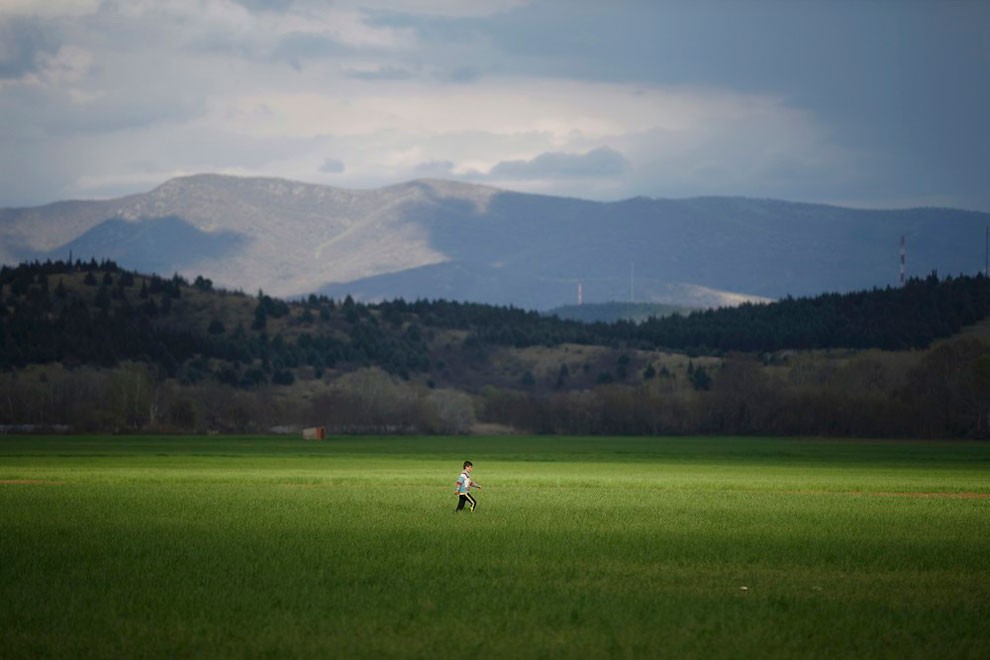 A migrant boy walks through a field near a makeshift camp on the Greek-Macedonian border near the village of Idomeni, Greece March 11, 2016. (Photo by Stoyan Nenov/Reuters) 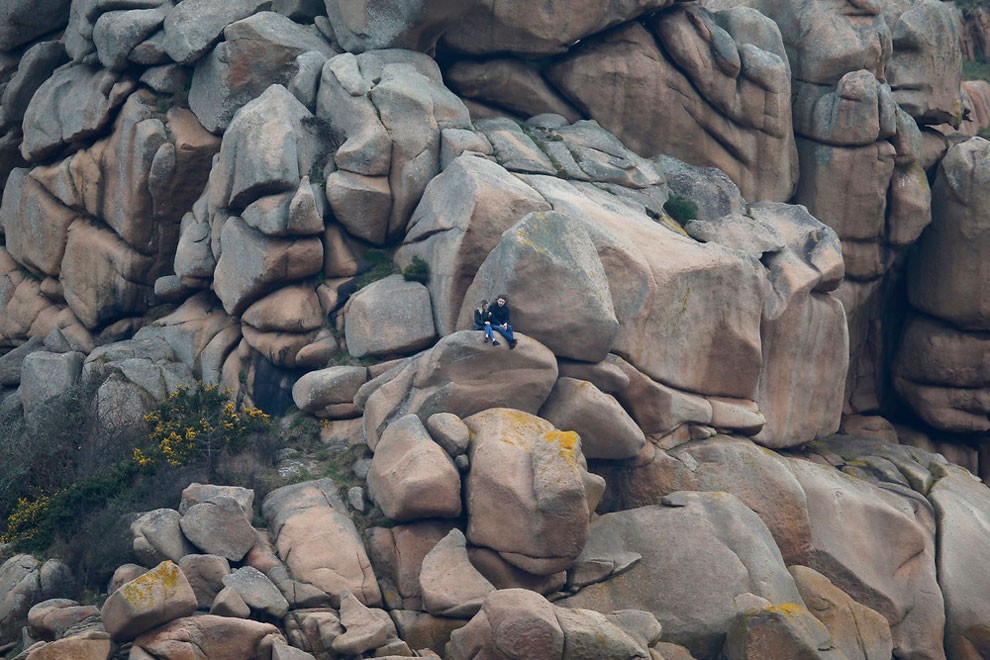 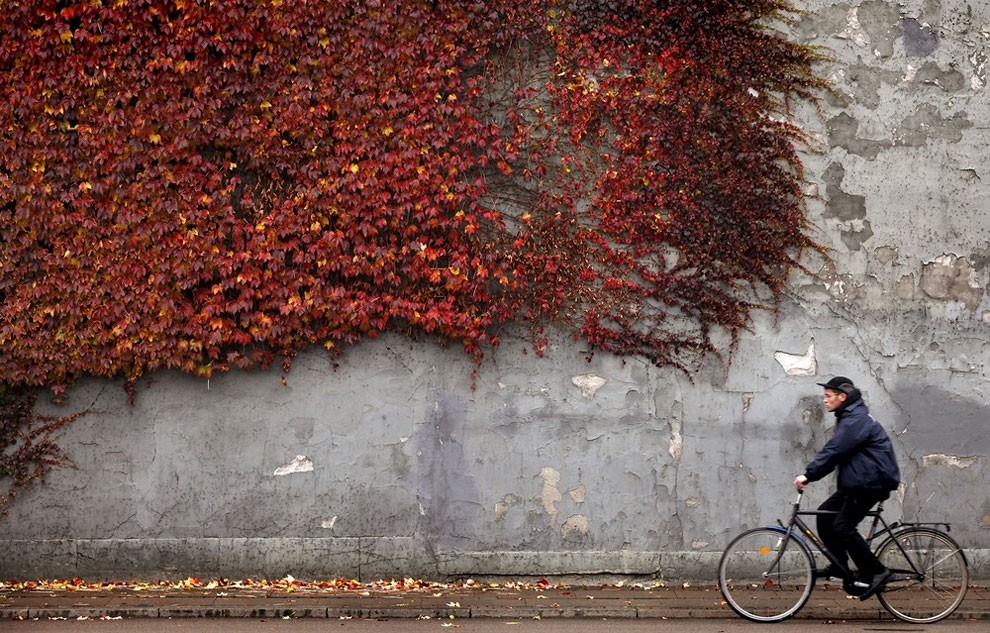 A cyclist rides past autumn-coloured ivy climbing the wall of a building in downtown Copenhagen, Denmark, in this file picture taken November 2, 2010. (Photo by Bob Strong/Reuters) 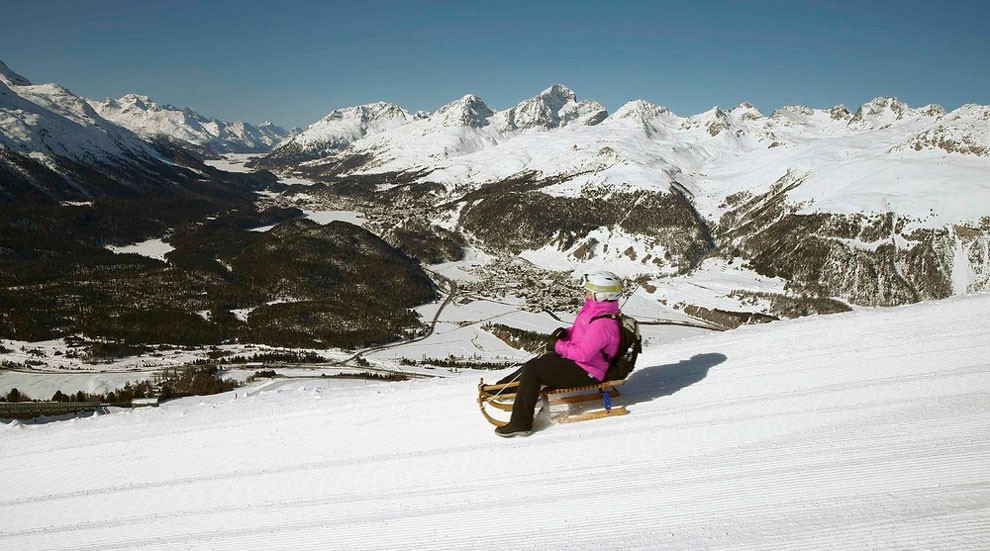 A woman rides down a public sledge course during a sunny winter’s day at the Muottas Muragle mountain near the resort of St. Moritz, Switzerland March 18, 2016. (Photo by Arnd Wiegmann/Reuters) 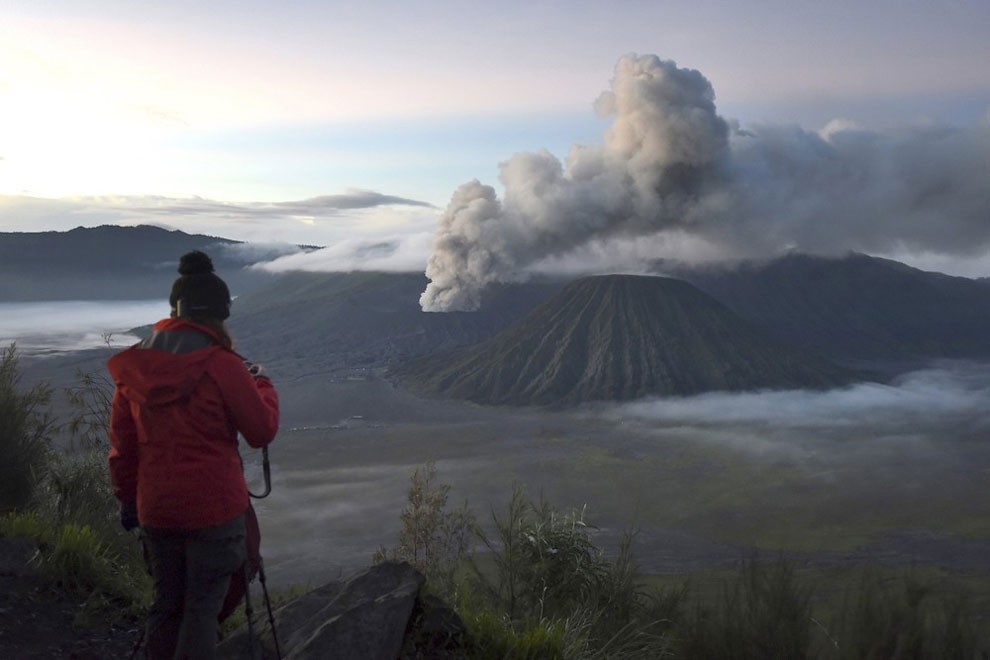 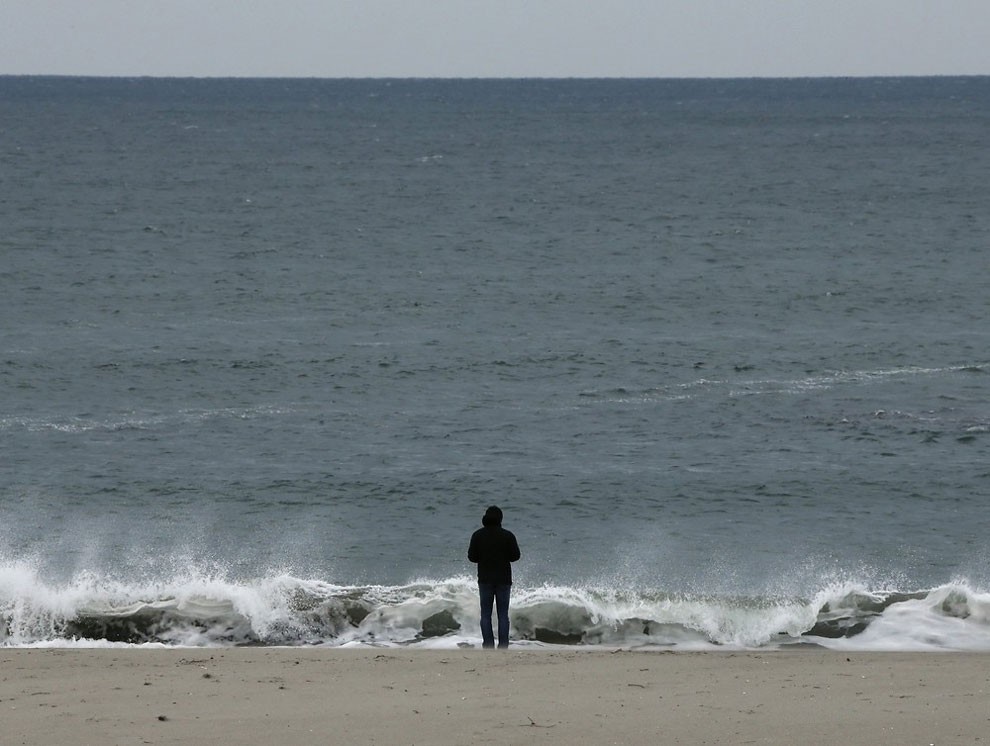 A lone man stands on the sea shore at tsunami-devastated Arahama, in the coastal district of Sendai, Miyagi Prefecture, northern Japan, 10 March 2016. (Photo by Kimimasa Mayama/EPA) 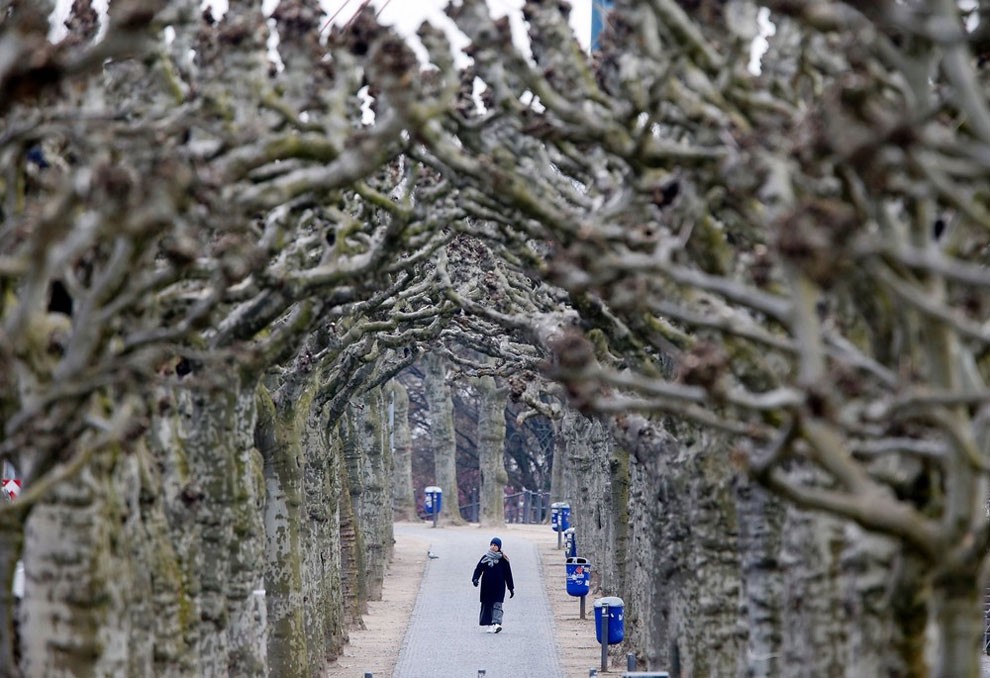 A woman strolls along an alley of plane trees in Frankfurt, Germany, March 16, 2016. (Photo by Michael Probst/AP Photo) 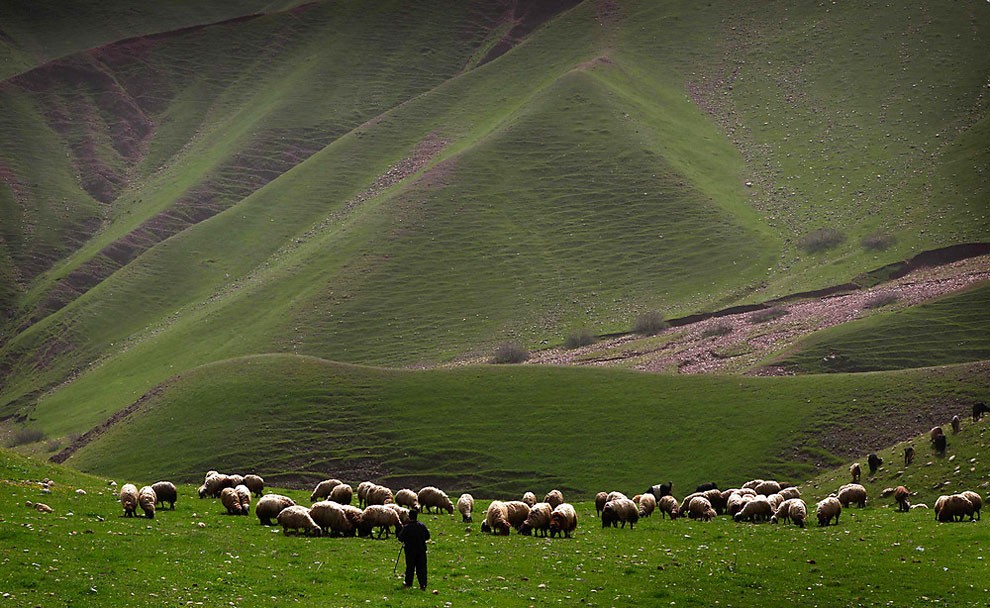 An Iraqi shepherd herds his sheep in the Kurdish town of Aqrah, 500 kilometres north of Baghdad, on March 21, 2016. (Photo by Safin Hamed/AFP Photo) 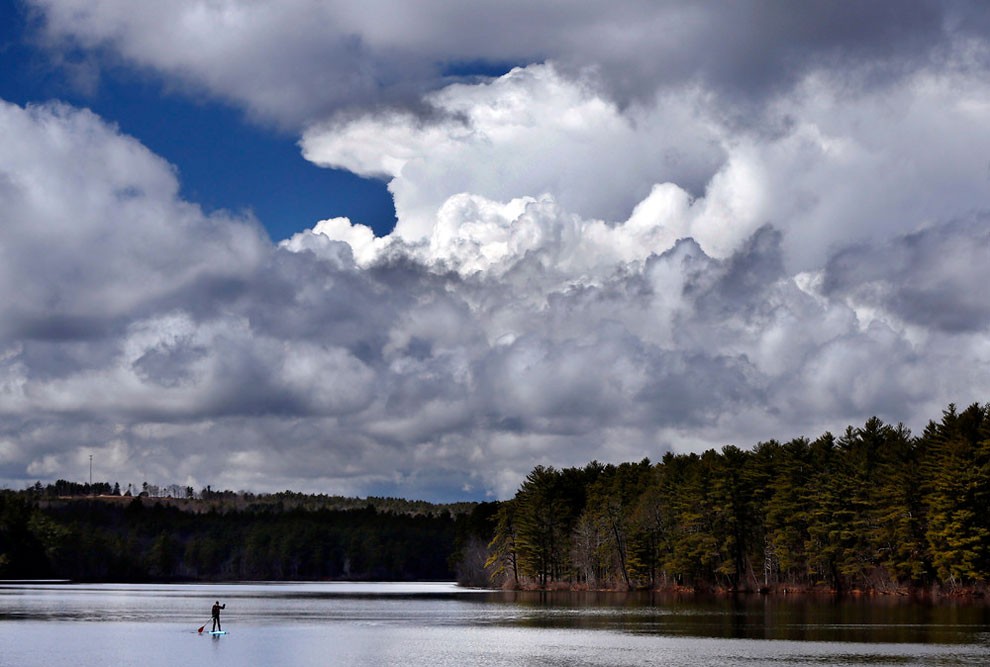 Storm clouds build prior to the arrival of a thunderstorm as Jeff Warren of Auburn, Maine, heads for shore on his paddleboard on Lower Range Pond Thursday, March 17, 2016, in Poland, Maine. (Photo by Robert F. Bukaty/AP Photo) 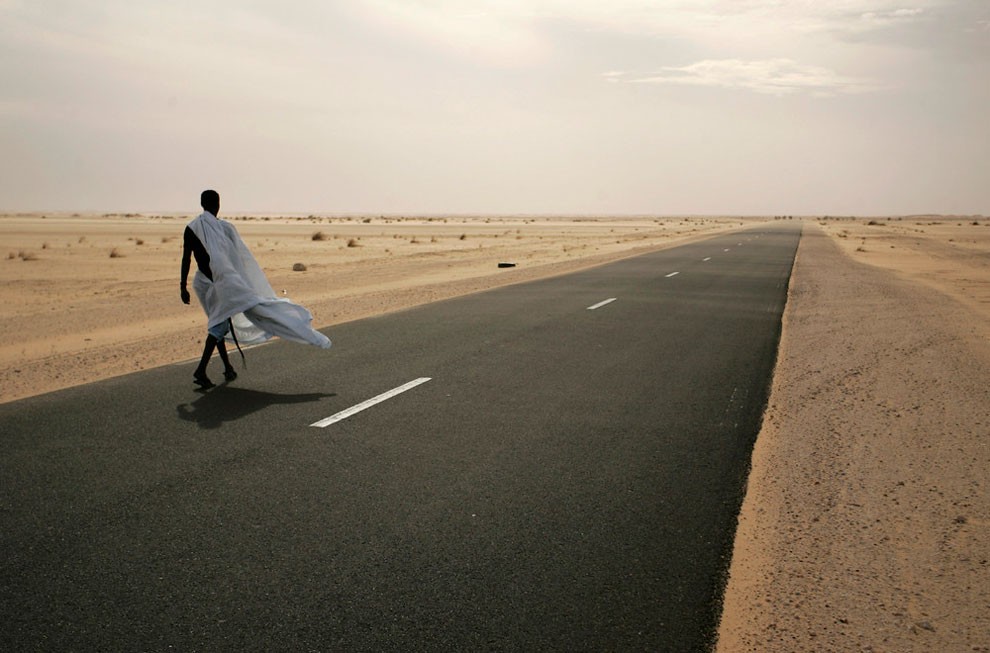 A man walks on the road between Nouahibou and Nouakchott, where three Spanish aid workers were abducted in Mauritania, December 3, 2009. (Photo by Rafael Marchante/Reuters) 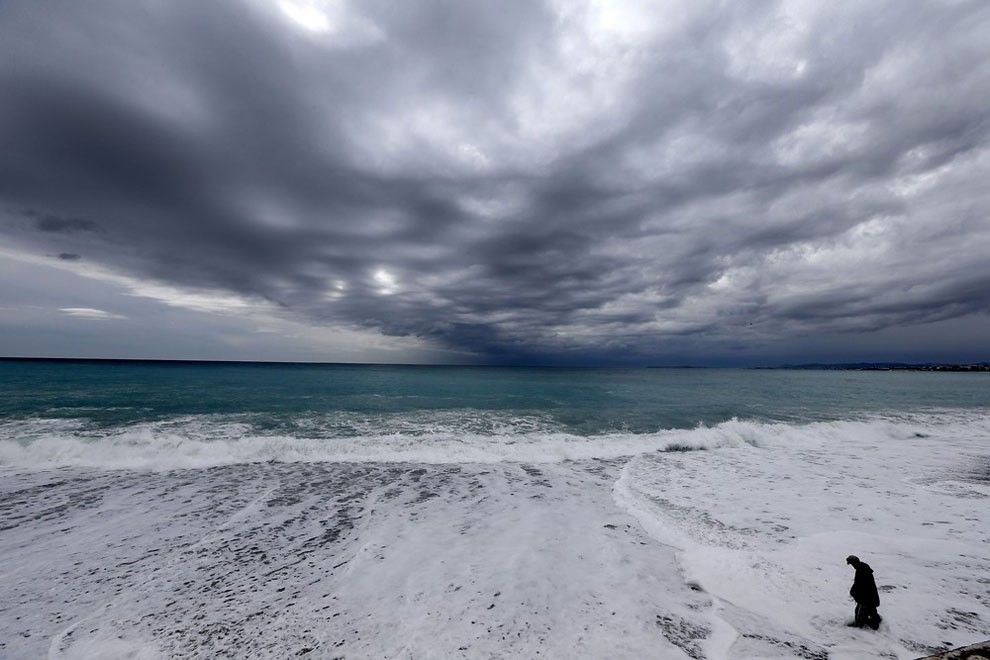 A man walks into the water as waves crash onto the shore of the Mediterranean sea in Nice, France on February 28, 2016. (Photo by Valery Hache/AFP Photo) 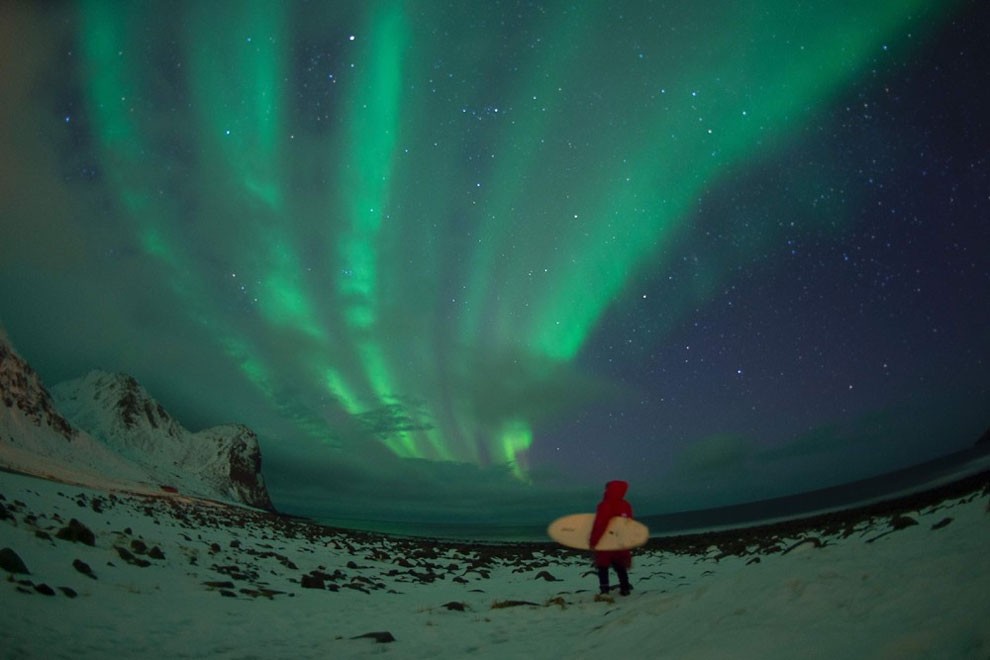 A surfer stands by northern lights ( aurora borealis ) on the snow covered beach of Unstad, on Lofoten Island, Arctic Circle, on March 10, 2016. Surfers from all over the world comes to Lofoten island to surf in extrem conditions. Ocean temperature is 5-6 °C, air temperature around 0°C in spite of a weather very unstable. (Photo by Olivier Morin/AFP Photo)

First Cabin Hotel - A Business-Class Capsule Hotel Located In Tokyo
Shark Island in Central Indonesia
Terrifying See-Through Sleeping Capsules Hanging 400 Feet Above Peru’s Sacred Valley
A Room With A View
When You Really Need A House To Live In: Homemade Trailer From The Past
The Happiest Places On Earth 2016
Little Polish Village Where Every House Is Covered In Colorful Flower Paintings
Fantastic Landscapes of Tuscany, Italy
Chinese Village Is Home To 39 Sets Of Twins
People Of The World: Māori In Stunning Photographs By Jimmy Nelson
Hippie Van Of The 1960s: Amazing Photographs That Capture People With Their Classic VW Buses
What School Lunch Looks Like For Students Around The World
Let #GandalftheGuide Show You The Beauty Of New Zealand In This Photo Series
The Solo Honeymoon: Woman’s Sad Photos After Husband Denied Visa
Leonhardi Procession in Bavaria
Guy Finds Abandoned Graveyard Of Supercars In UAE
Mapping The Machu Picchu - How Google Builds Its Maps
1,400-Year-Old Gingko Tree Sheds a Spectacular Ocean of Golden Leaves
The Pantone Cafe Serves The Colorful Meal Of Your Dreams
Girl Shares Pics Of Street Food From Around The World On Her Instagram Account
Beyound The Postmodern Kitch: World’s First Gold-Plated Hotel Opened In Vietnam
The Earth From Space Through The Eyes Of French Astronaut Thomas Pesquet
The South China Karst
Gunther Holtorf's 23-year Rroad Trip On Your Mercedes-Benz G Wagon
Gadhimai Festival in Nepal
Take A Look Inside "Star Wars: Galaxy's Edge" Theme Park At Disneyland
You Will Never Freeze As Much As Siberians Do
Epic Photos Of The Natural Disasters Around The World
The Nomadic Life of a Man who Lives in a Camper Van
This Gorgeous Place Might As Well Be Called Pirate Island
landscapes, massive, minimal, people, perfect, photos