Art Of The Deep Space 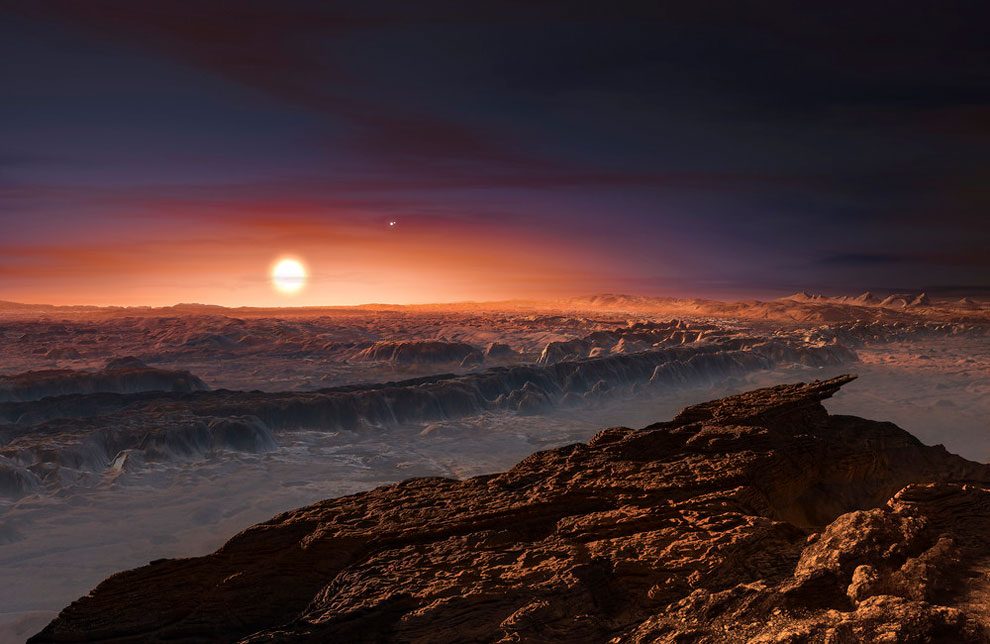 A view of the surface of the planet Proxima orbiting the red dwarf star Proxima Centauri, the closest star to our Solar System. (Photo by M. Kornmesser/Reuters/ESO) 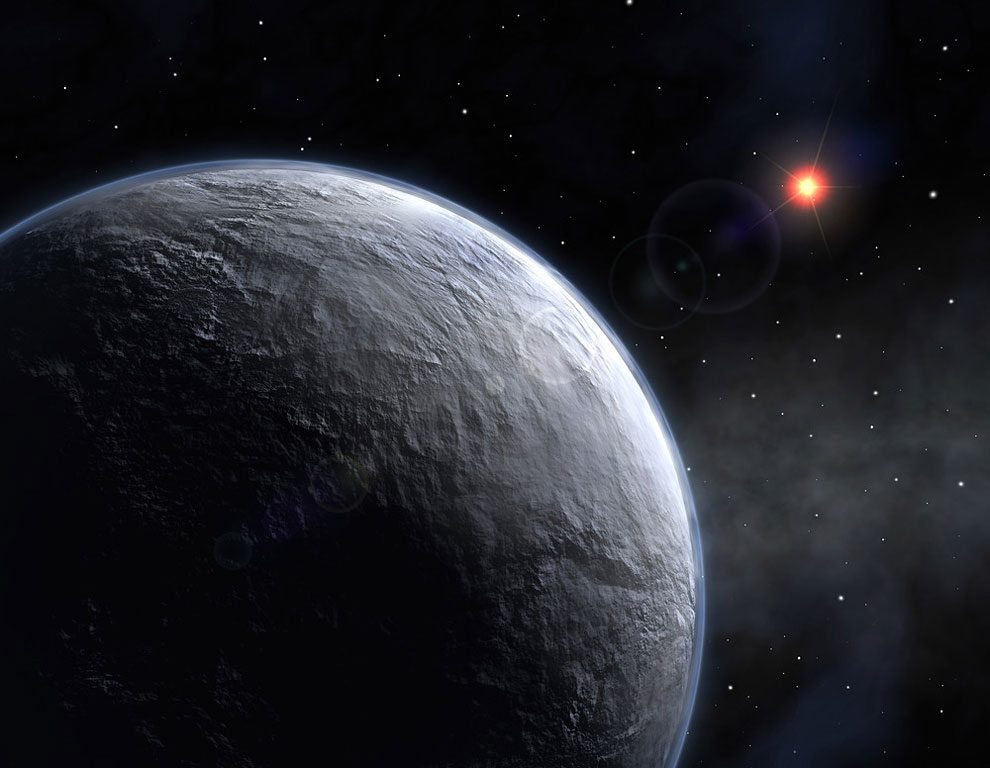 A newly discovered planet, designated by the unglamorous identifier of OGLE-2005-BLG-390Lb, orbits a red star five times less massive than the Sun and located at a distance of about 20,000 light years. (Photo by Reuters/ESO) 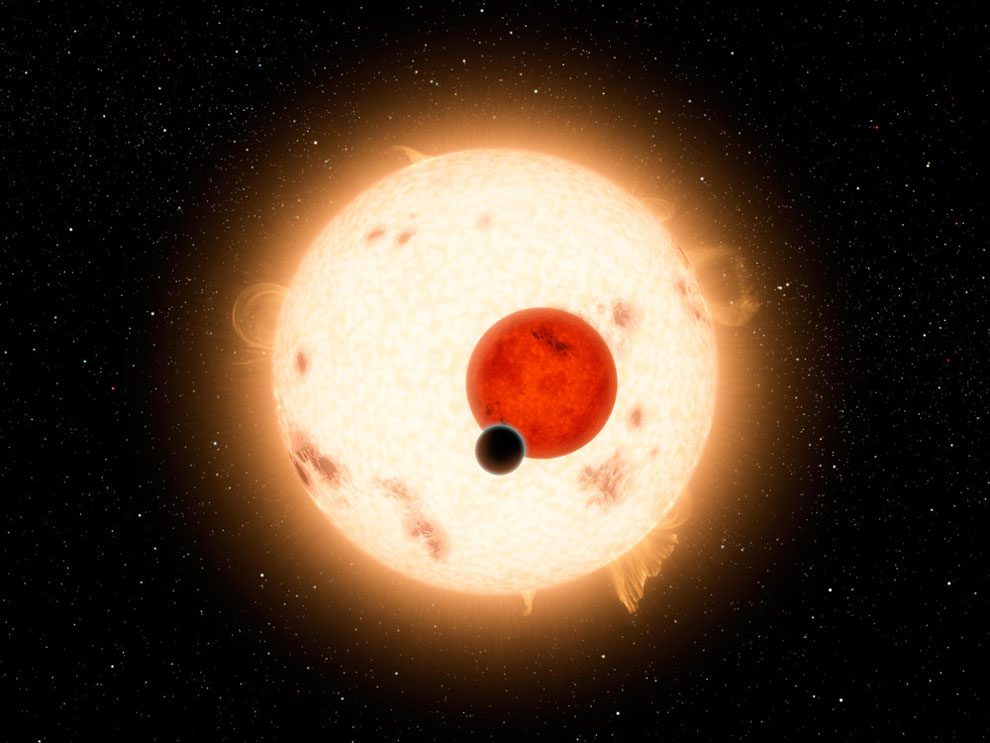 The planet Kepler-16b with its two stars. The cold planet, with its gaseous surface, is not thought to be habitable. The largest of the two stars, a K dwarf, is about 69 percent the mass of our sun, and the smallest, a red dwarf, is about 20 percent the sun’s mass. (Photo by R. Hurt/Reuters/NASA/JPL-Caltec) 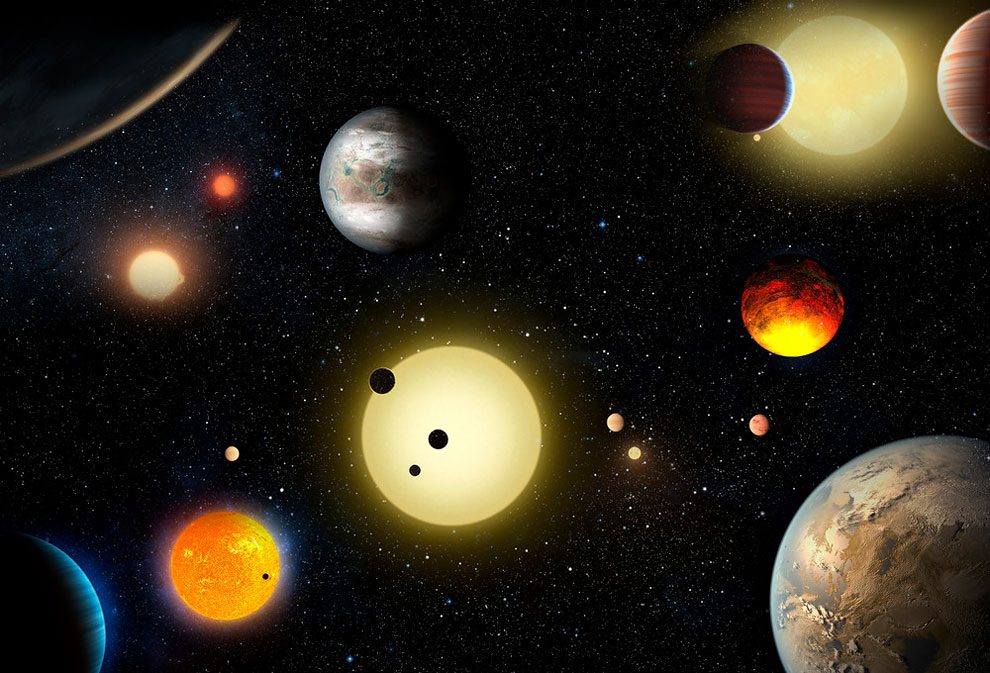 An artist’s concept depicts select planetary discoveries made so far by NASA’s Kepler space telescope. Astronomers have discovered 1,284 more planets beyond our solar system, with nine possibly in orbits suitable for surface water that could bolster the prospects of supporting life. (Photo by Courtesy W. Stenzel/Reuters/NASA) 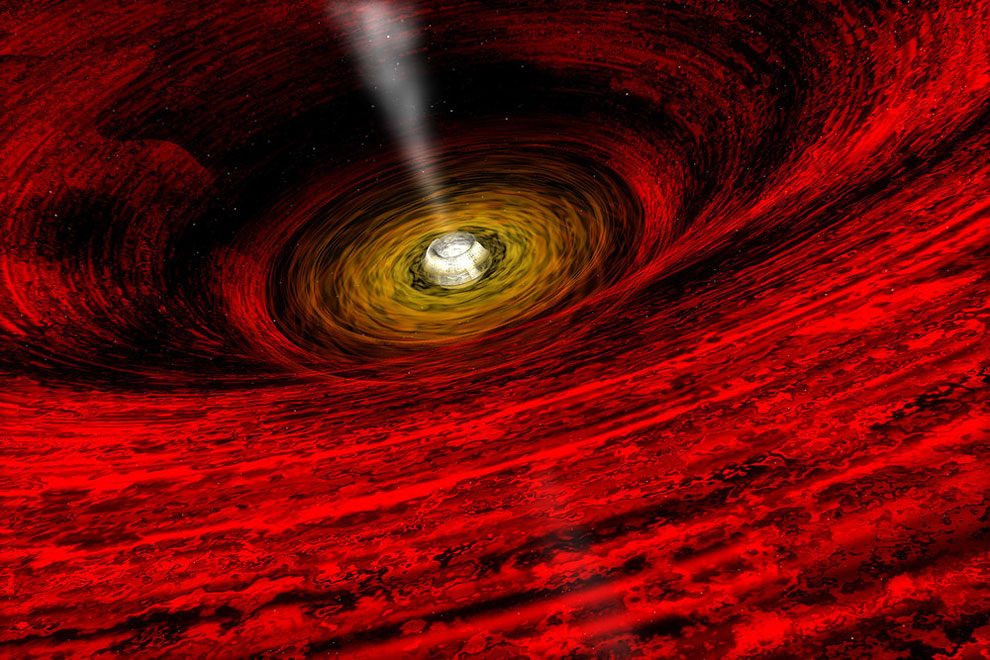 An artist’s concept of matter swirling into a supermassive black hole. (Photo by Reuters/NASA) 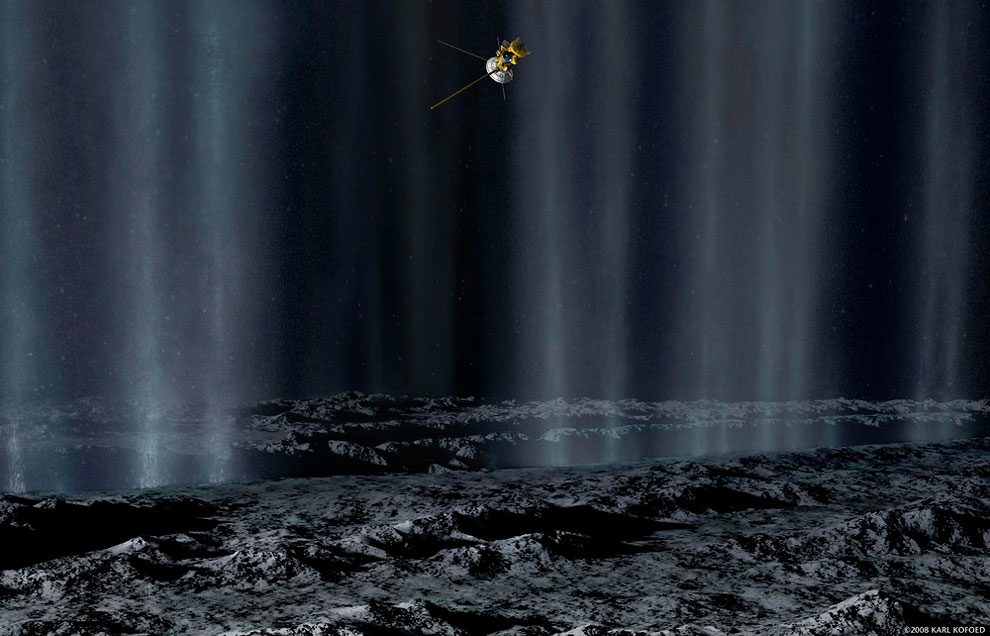 An artist’s concept shows the Cassini spacecraft passing by Saturn’s moon Enceladus to study plumes from geysers that erupt from giant fissures in the moon’s southern polar region. The huge plumes of water vapor and ice particles are spewing at supersonic speeds in a way that strongly suggests they come from liquid water hidden down below the icy surface. This offers evidence the moon may harbor conditions that could support life, even if only microbial organisms. (Photo by Karl Kofoed/Reuters/NASA) 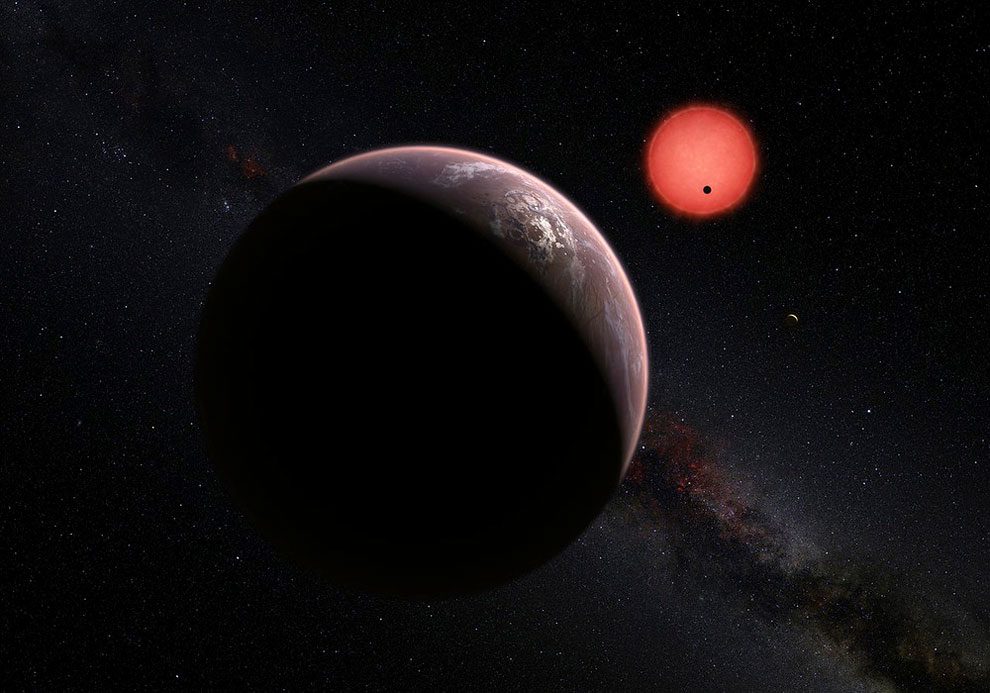 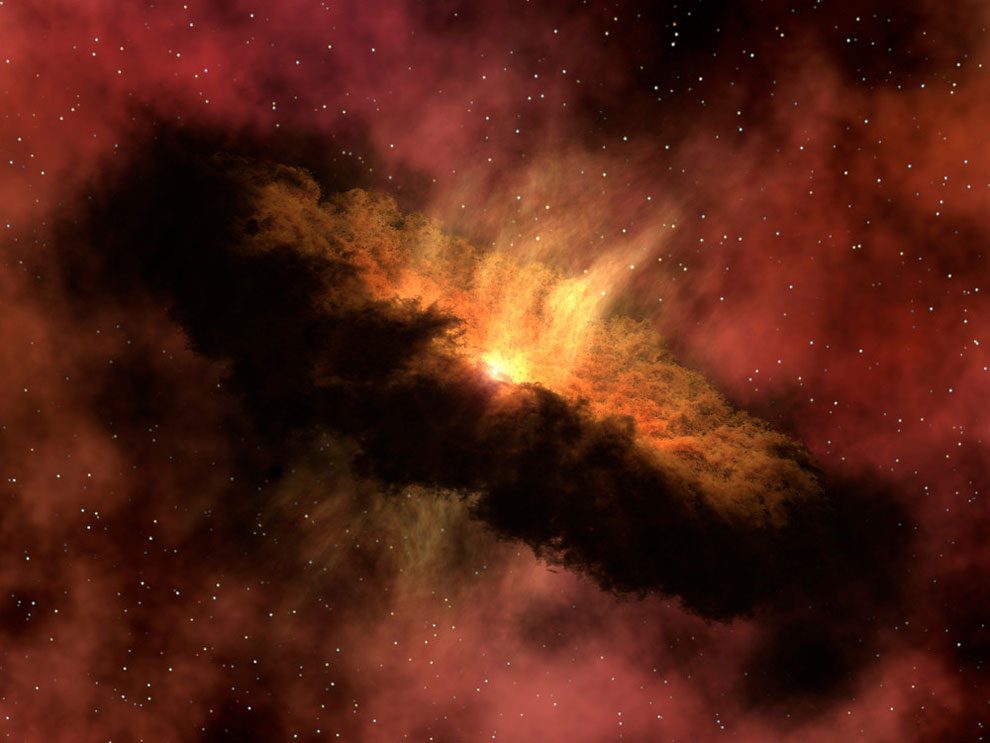 A fledgling solar system containing deep within it enough water vapor to fill all the oceans on Earth five times, located in our Milky Way galaxy about 1,000 light years from Earth in the constellation Perseus. (Photo by Reuters/NASA/JPL-Caltech) 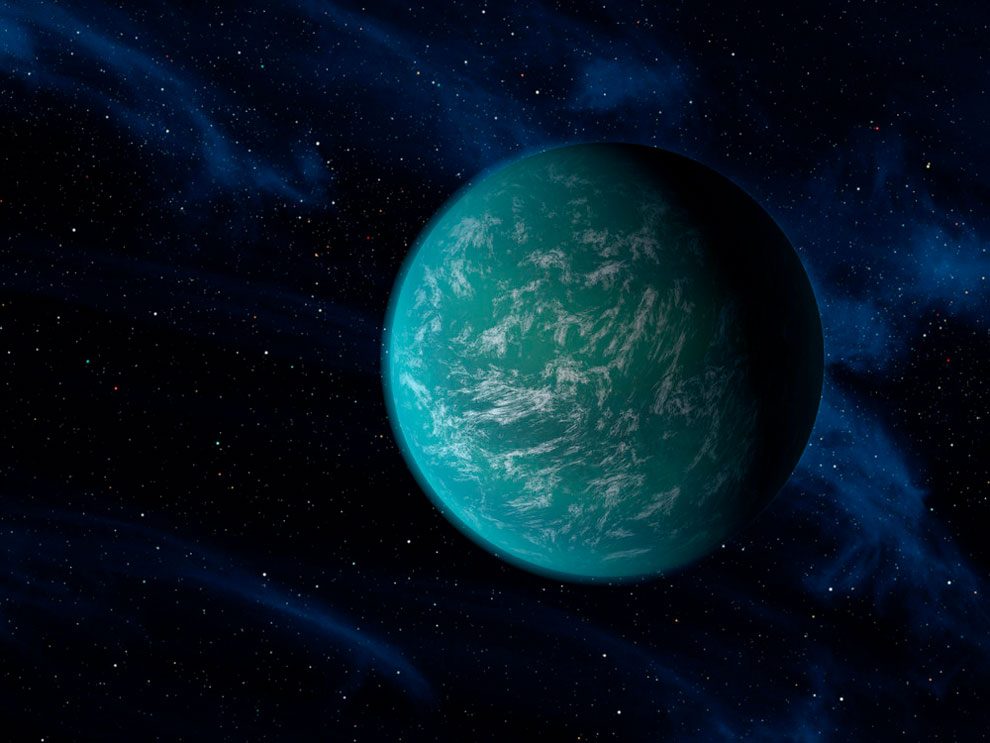 Kepler-22b, the most Earth-like planet ever discovered, is circling a star 600 light years away. It is the smallest and the best positioned to have liquid water on its surface – among the ingredients necessary for life on Earth. (Photo by Reuters/NASA/Ames/JPL-Caltech) 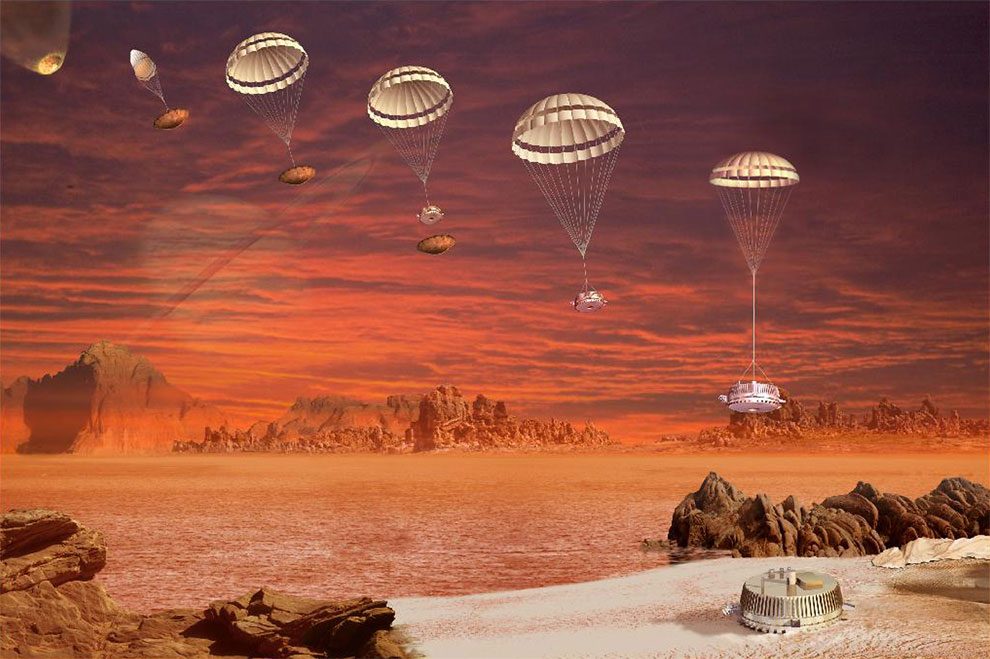 The European Space Agency’s Huygens probe descent sequence from the Cassini spacecraft to Saturn’s moon Titan in January 2005. Scientists reconstructed the chain of events from the landing by analyzing data from a variety of instruments that were active during the impact and found that the spacecraft, bounced, slid and wobbled its way to rest in the 10 seconds after touching down on Titan. (Photo by Reuters/NASA/JPL/ESA) 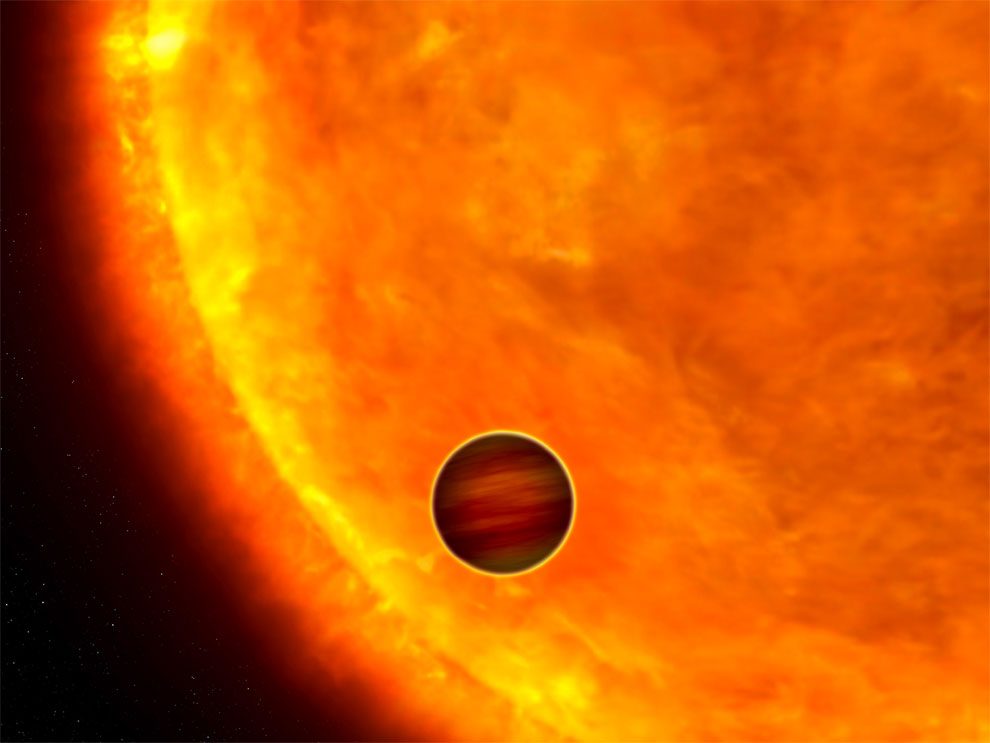 A Jupiter-sized planet passing in front of its parent star. Such events are called transits. When the planet transits the star, the star’s apparent brightness drops by a few percent for a short period. (Photo by G. Bacon/Reuters/NASA/ESA) 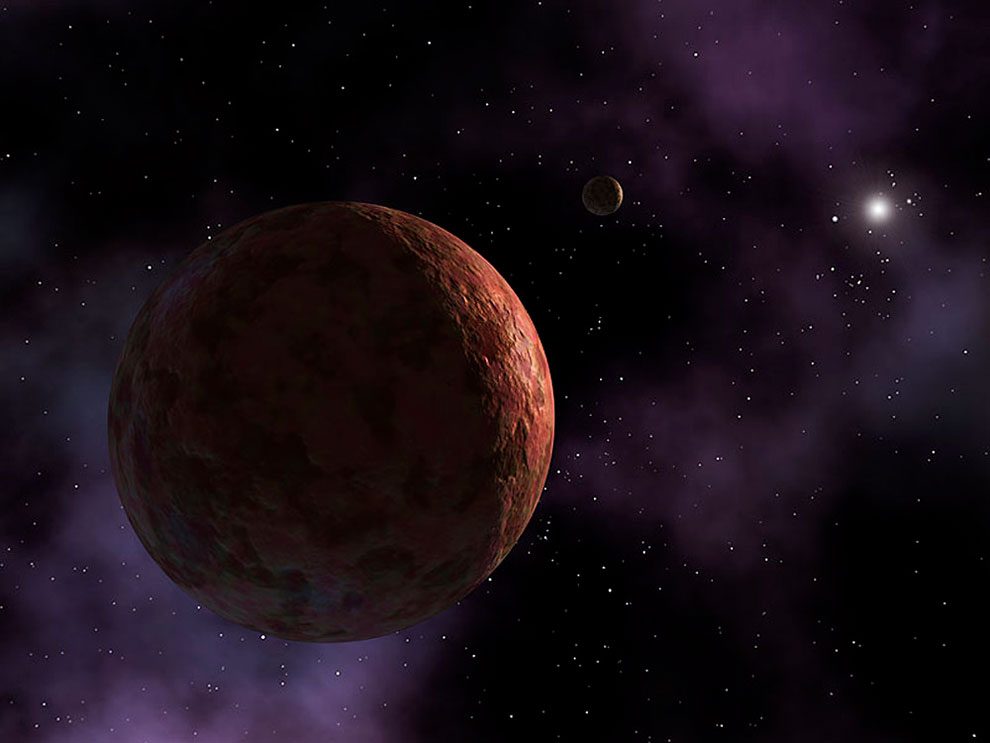 A planet-like object dubbed Sedna, a small icy body far beyond Pluto and the Kuiper Belt, a discovery that calls into question exactly what was going on during the early days of the solar system. (Photo by Reuters/NASA/JPL-Caltech) 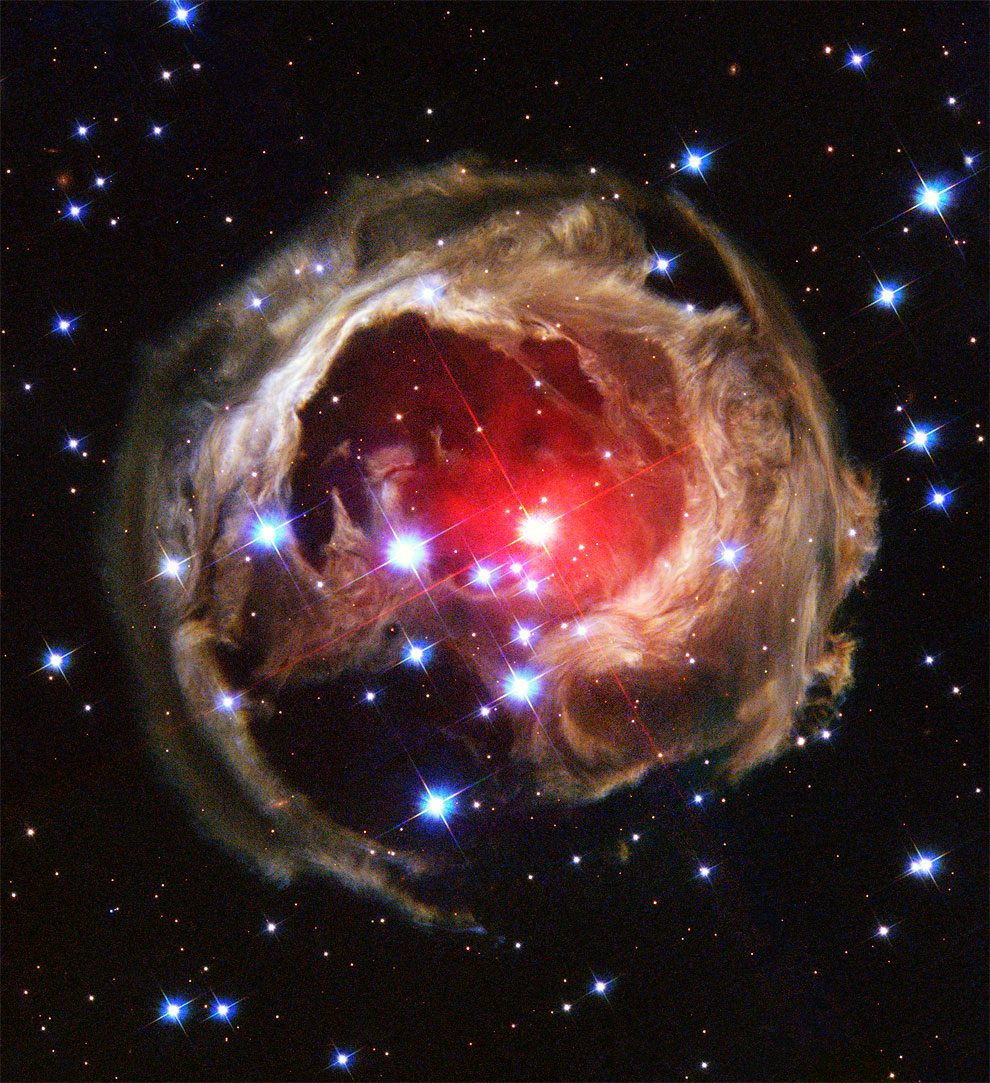 The star V838 Mon, whose outer surface suddenly greatly expanded with the result that it became the brightest star in the entire Milky Way Galaxy in January 2002. Then, just as suddenly, it faded. A stellar flash like this had never been seen before. (Photo by Reuters/NASA/ESA) 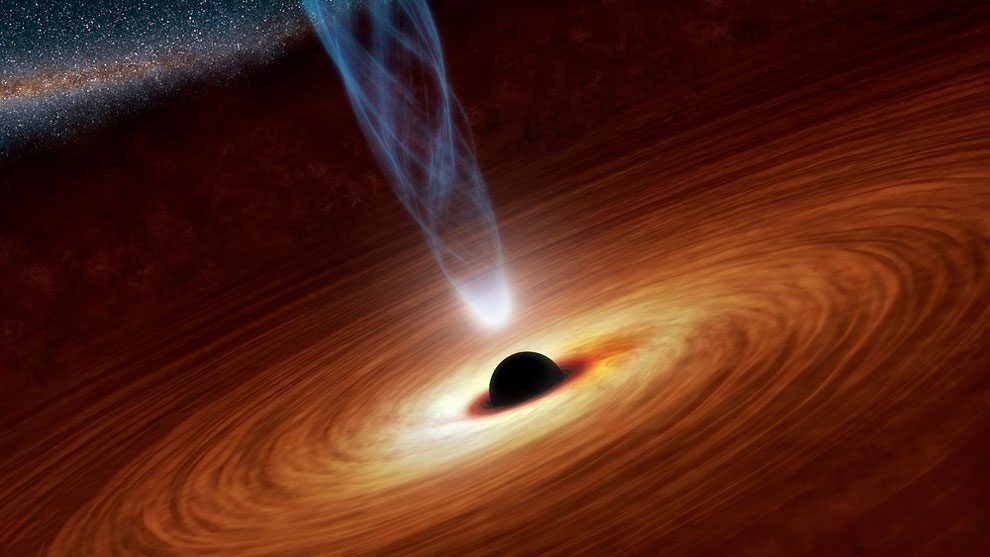 A supermassive black hole with millions to billions times the mass of our sun. The accretion disk surrounding the center forms as the dust and gas in the galaxy falls onto the hole, attracted by its gravity. Also shown is an outflowing jet of energetic particles, believed to be powered by the black hole’s spin. (Photo by Reuters/NASA/JPL-Caltech) 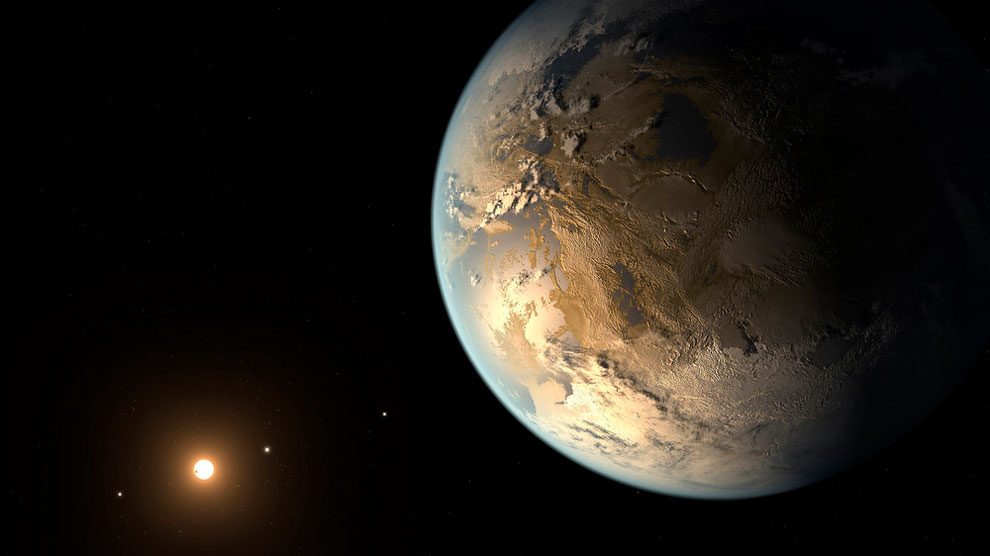 The planet Kepler-186f, the first validated Earth-size planet to orbit a distant star in the habitable zone, which is a range of distance from a star where liquid water might pool on the planet’s surface. The discovery is the closest scientists have come so far to finding a true Earth twin. The star, known as Kepler-186 and located about 500 light years away in the constellation Cygnus, is smaller and redder than the sun. (Photo by Reuters/NASA/JPL-Caltech) 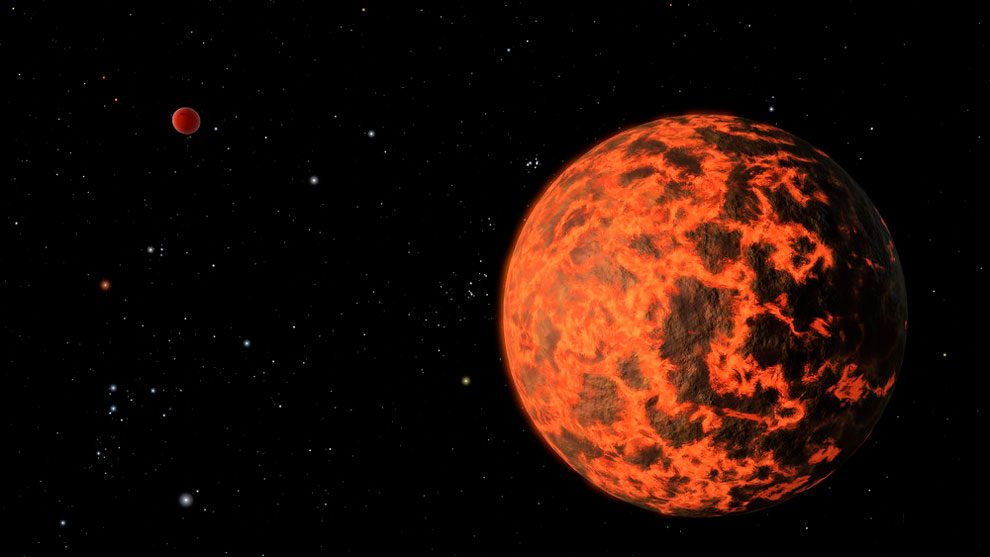 A world just two-thirds the size of Earth – one of the smallest on record – detected by NASA’s Spitzer Space Telescope. The exoplanet candidate, known as UCF-1.01, orbits a star called GJ 436, which is located a mere 33 light-years away. UCF-1.01 might be the nearest world to our solar system that is smaller than our home planet. Evidence for UCF-1.01 turned up when astronomers were studying a known, Neptune-sized exoplanet, called GJ 436b, seen in the background in this image. The identification of nearby small planets may lead to their characterization using future instruments. In this way, worlds like UCF-1.01 might serve as stepping stones to one day finding a habitable, Earth-like exoplanet. (Photo by Reuters/NASA/JPL-Caltech) 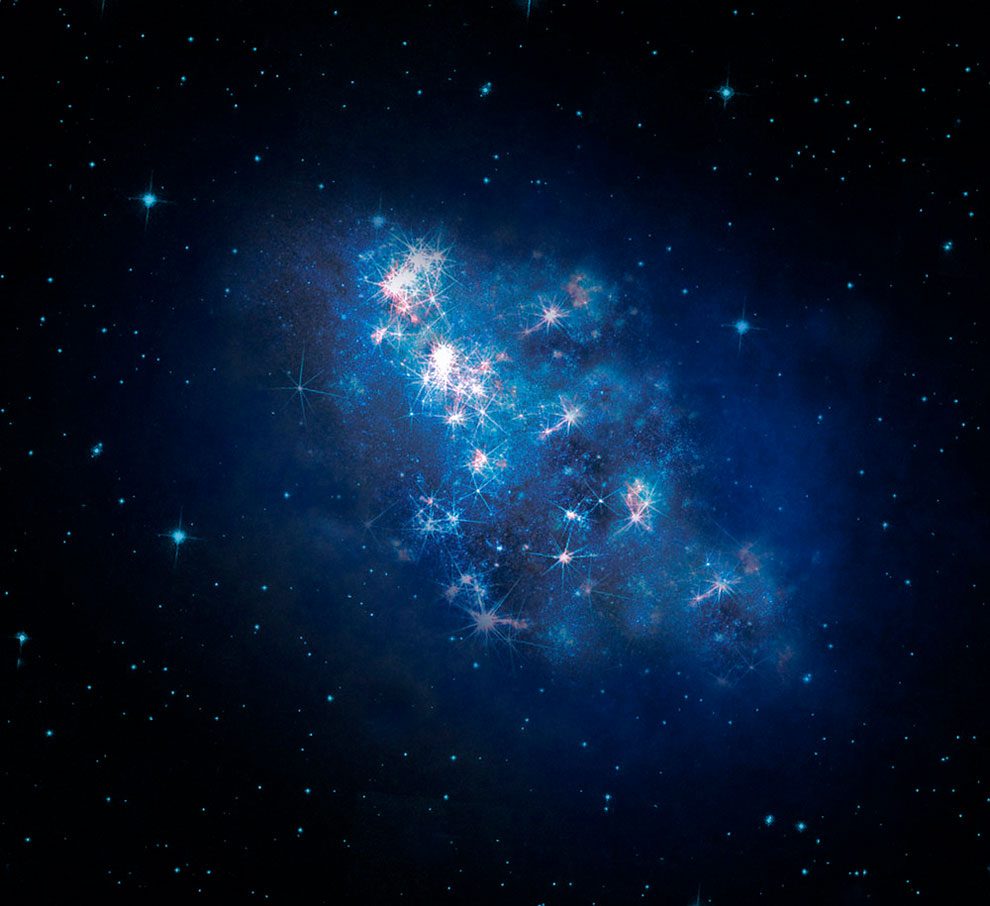 A galaxy known by its catalog name z8_GND_5296. Light from the galaxy took about 13.1 billion years to reach the orbiting Hubble Space Telescope and the Keck Observatory in Hawaii, both of which detected the galaxy in infrared light. (Photo by Reuters/NASA) 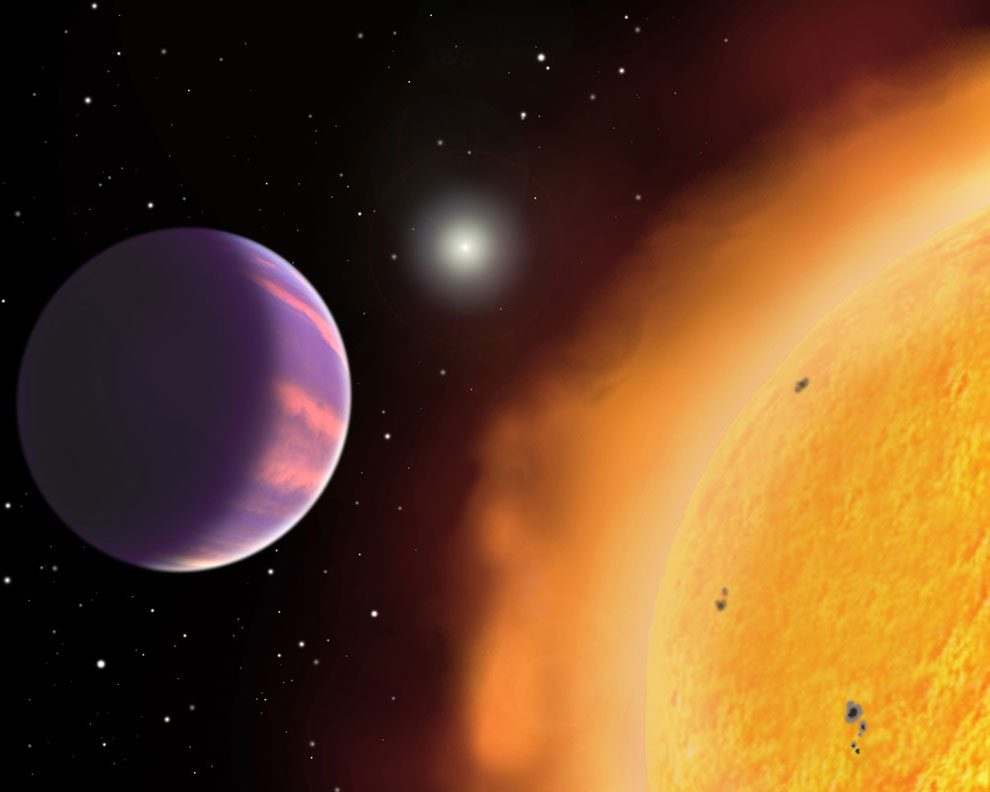 A baffling planet, known as HAT-P-1, that is much larger than theory predicts. The planet has a radius about 1.38 times Jupiter’s but contains only half Jupiter’s mass. (Photo by David A. Aguilar/Reuters) 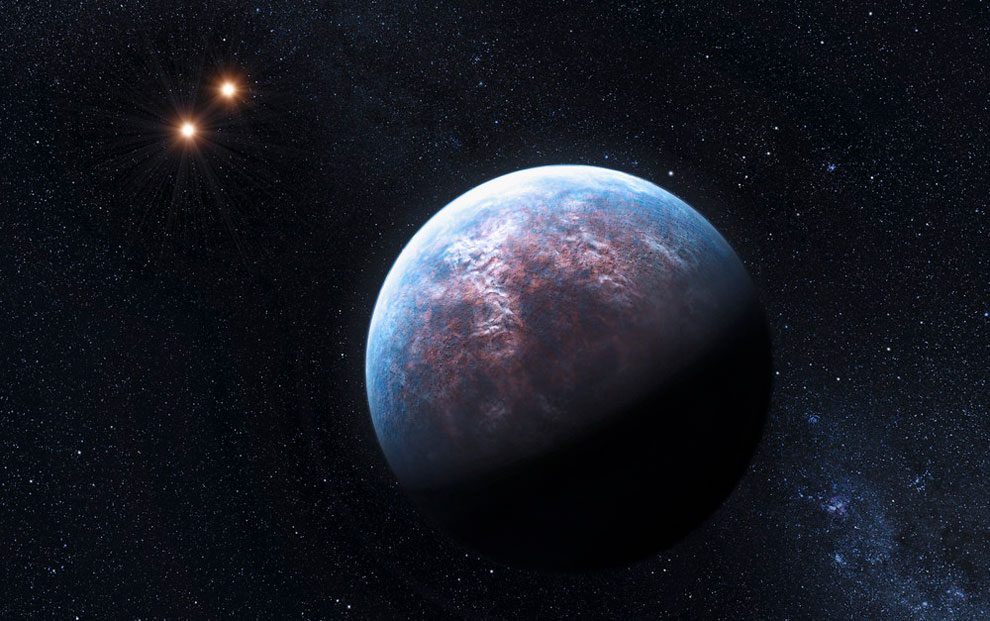 An exoplanet 6 times the size of Earth circulating around its low-mass host star at a distance equal to 1/20th of the Earth-Sun distance. The host star is a companion to two other low-mass stars, which are seen here in the distance. (Photo by L. Calcada/Reuters/ESO) 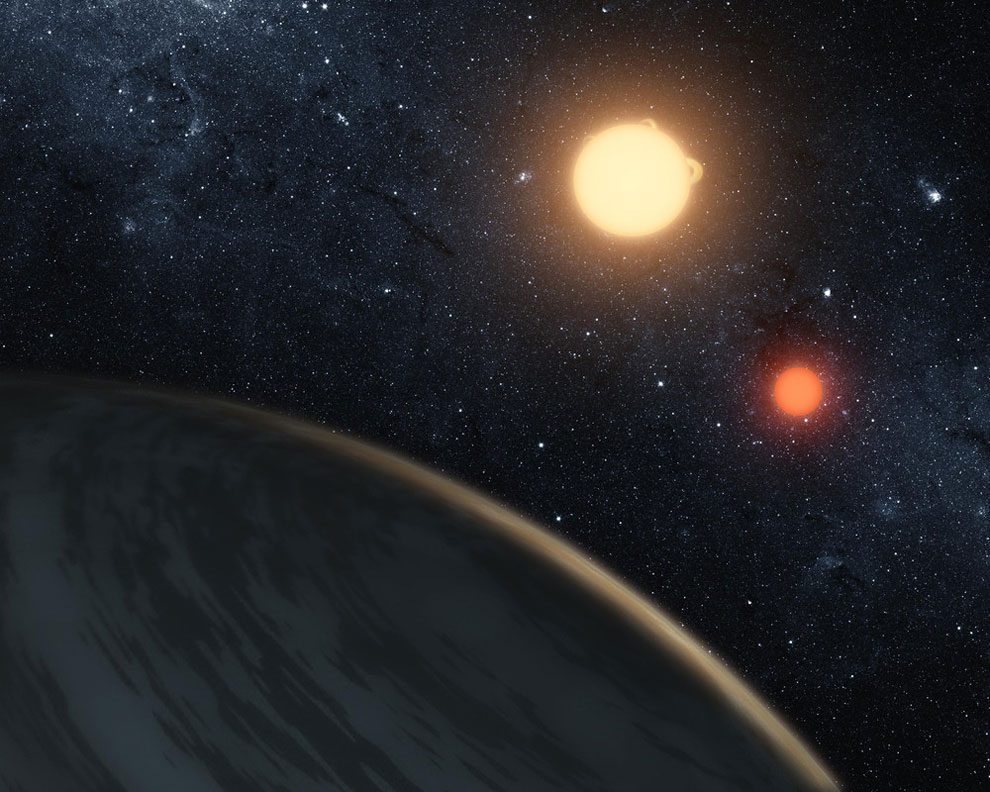 The circumbinary planet Kepler-16b – the first planet known to definitively orbit two stars. The cold planet, with its gaseous surface, is not thought to be habitable. The largest of the two stars, a K dwarf, is about 69 percent the mass of our sun, and the smallest, a red dwarf, is about 20 percent the sun’s mass. These star pairs are called eclipsing binaries. (Photo by T. Pyle/Reuters/NASA/JPL-Caltech) 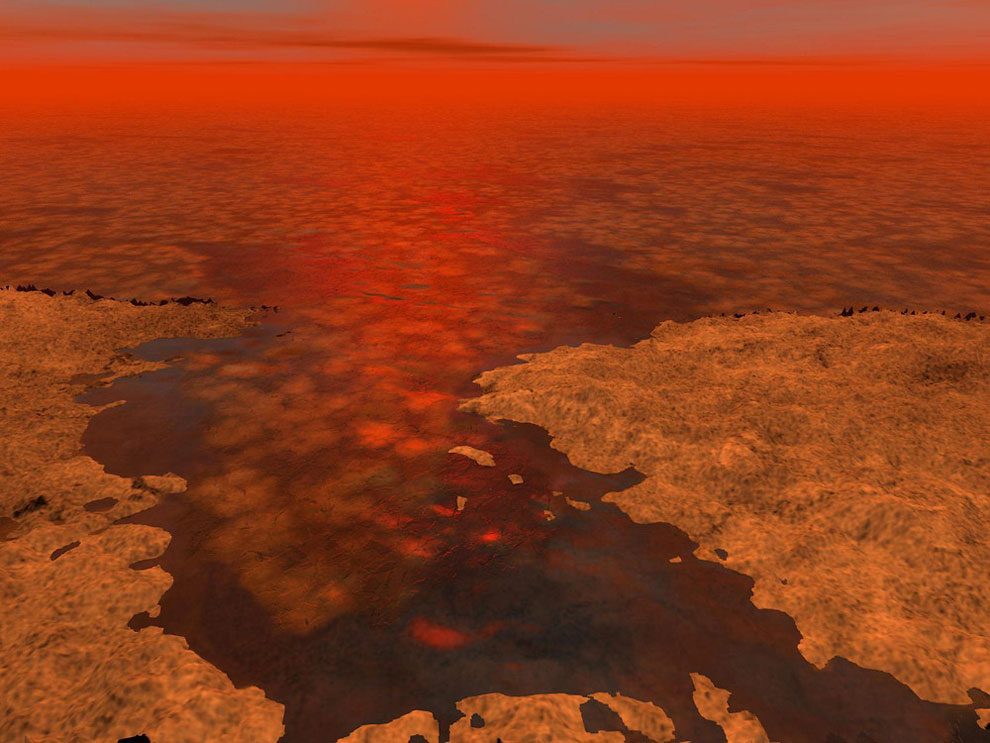 Hydrocarbon ice forming on a liquid hydrocarbon sea of Saturn’s moon Titan. Some scientists suggest that clumps of methane-and-ethane-rich ice – shown here as the lighter-colored clusters – could float under some conditions. (Photo by Reuters/NASA/JPL-Caltech/USGS) 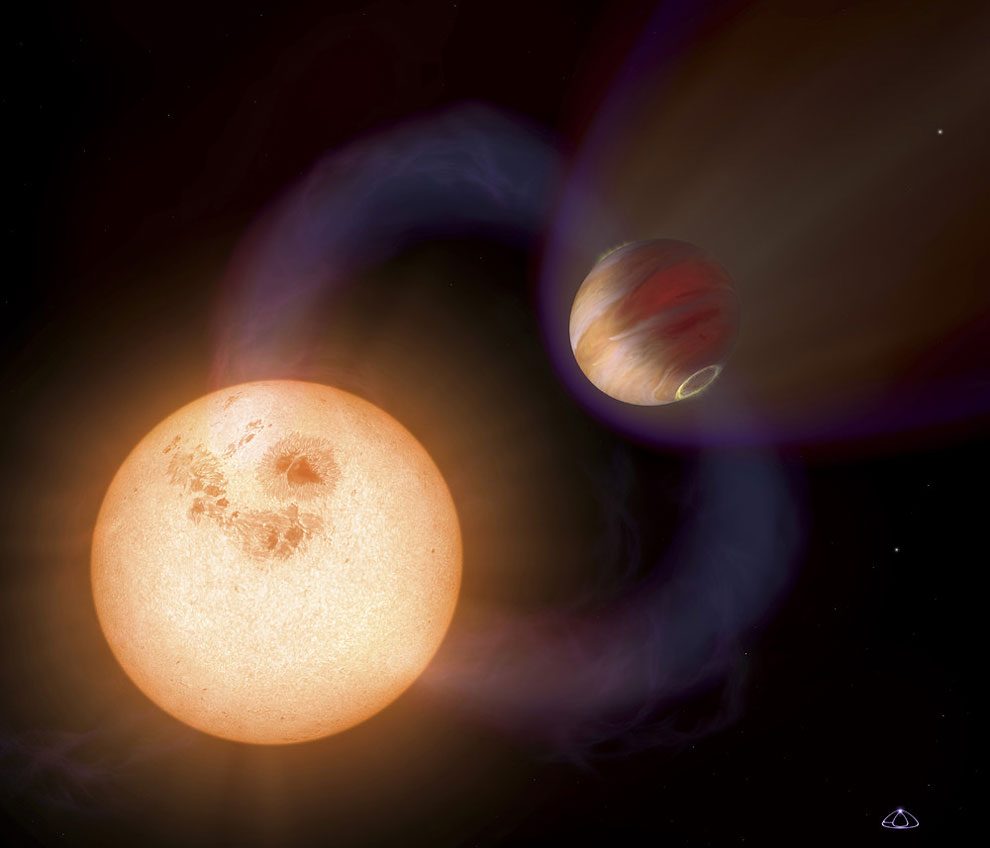 A unique type of exoplanet discovered with the Hubble Space Telescope. The planet is so close to its star that it completes an orbit in 10.5 hours. The planet is only 750,000 miles from the star, or 1/130th the distance between Earth and the Sun. (Photo by A. Schaller/Reuters/NASA/ESA) 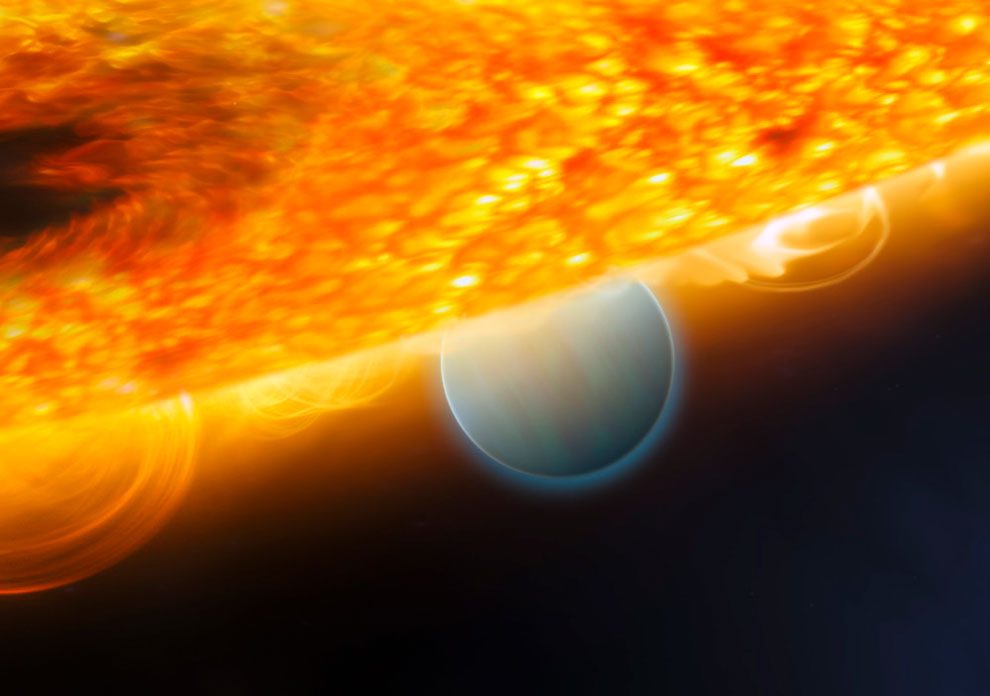 The Jupiter-size extrasolar planet, HD 189733b, being eclipsed by its parent star. The planet is a “hot Jupiter”, so close to its parent star that it completes an orbit in only 2.2 days. (Photo by M. Kornmesser/Reuters//ESA/NASA) 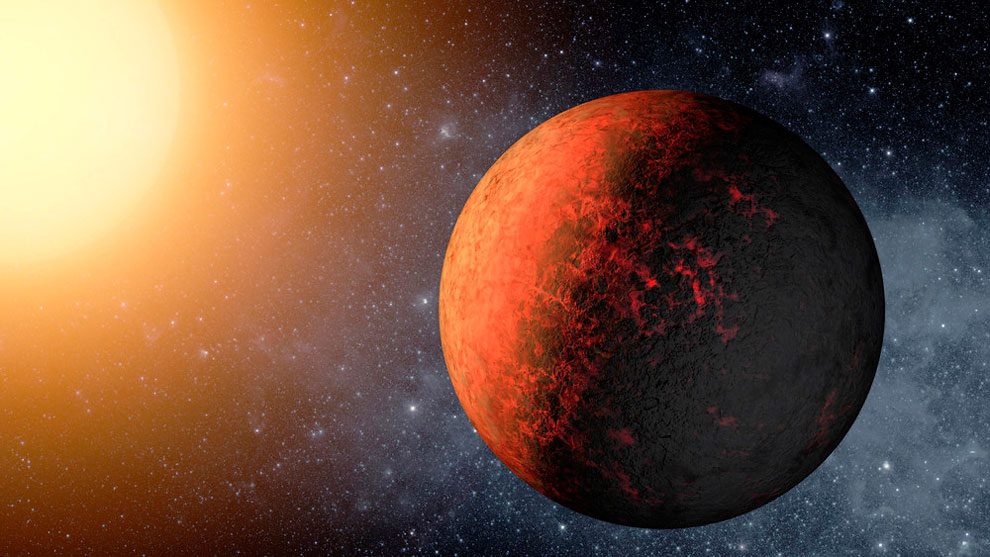 A planet called Kepler-20e, an Earth-size planet orbiting a sun-like star outside our solar system. (Photo by Reuters/NASA/Ames/JPL-Caltech) 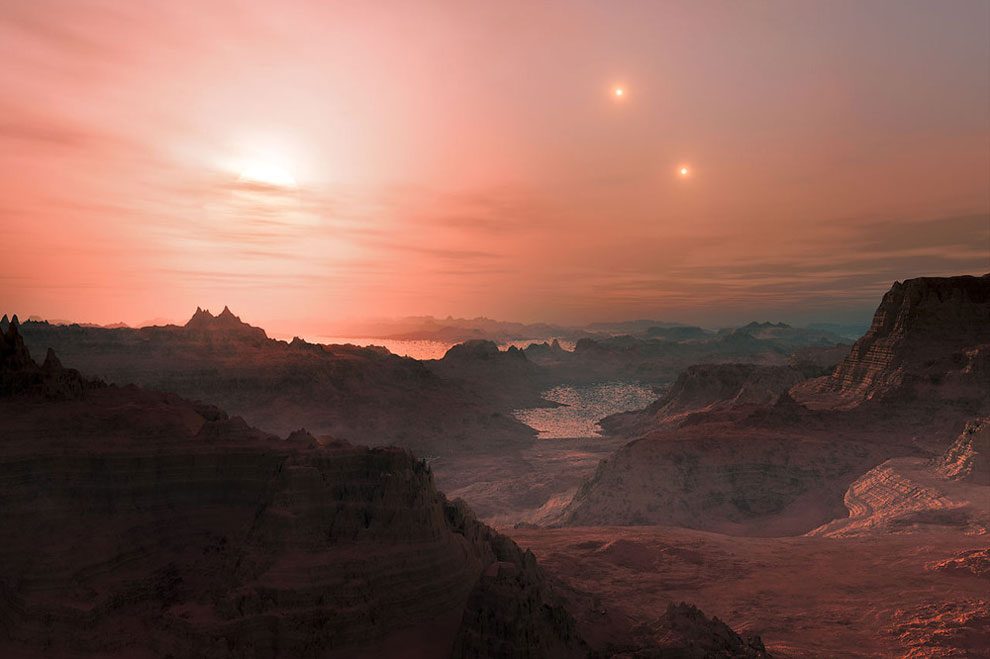 A sunset seen from the super-Earth Gliese 667 Cc. Astronomers have estimated there are tens of billions of such rocky worlds orbiting faint red dwarf stars in the Milky Way alone. (Photo by L. Calcada/Reuters/ESO)

Cyberpunk 2077 Posters That Don't Offend Anyone
Chinese Teacher Has Some Serious Chalk Skills
This Is An Ad For Men: Hire More Women In Leadership Roles
Japanese Artist Creates Stunningly Realistic Pen And Pencil Illustrations
Artist Creates Comics With Chilling Endings And Here’s 30 Of The Creepiest Ones
"Slow Down and Draw": The Colorful Graphic Design Works of Ailish Beadle
Talented Mum Creates Epic Napkin Art For Her Kids Lunch
A Group Of Russian Artists Have Created The Ultimate Virtual Reality Project
Expressive, Large-Scale Pencil Drawings That Are Amazingly Photo-Realistic
21 Absolute Benefits Of Having A Cat
"Pixel Wave 2015" - An Interactive Projection Art Installation During The Singapore Night Festival
This Artist Painted Famous Characters Into Old Thrift Store Paintings And Raised Their Value
"Thriller" Flashmob In Sao Paolo Honors The King Of Pop
Artist Creates Living, Breathing Paintings. This Is Anything But Normal.
Artist Perfectly Illustrates What Superheroes Do During The Quarantine
Dreamlike Images That Will Inspire Your Surrealist Soul
Book-Loving Guy Turns His Massive Library Into Art Space
German TV Show Replaced Trump With The Baby Blimp, And It’s Perfect
Retro And Futuristic Illustrations By James Gilleard
The Kids Are Not Alright: Hollow Children By Björn Griesbach
Ugly Holiday Rompers Are Finally Here For All Your Office Party Needs
Female Portrait Illustrations By Justine Florentino
Treebeard: Portraits Of My Friends With Plants Growing From Their Heads
Artist Henry Hargreaves Decided To Show What Happens After The Water In A Popular Drinks Is Boiled Away
Office Workers Sharing Photos Of Their Sad Desk Lunches
50 Transformations By This Hairstylist And His Team That Show The Power Of A Good Stylist
Stunning Figurative Oil Paintings by American Artist Malcolm Liepke
Victorian Lady Madame Barocle
Superheroes Reimagined With Realistic Body Types
Fascinating Letterring Graffiti Art By Ernest
space