Street Art Around The World 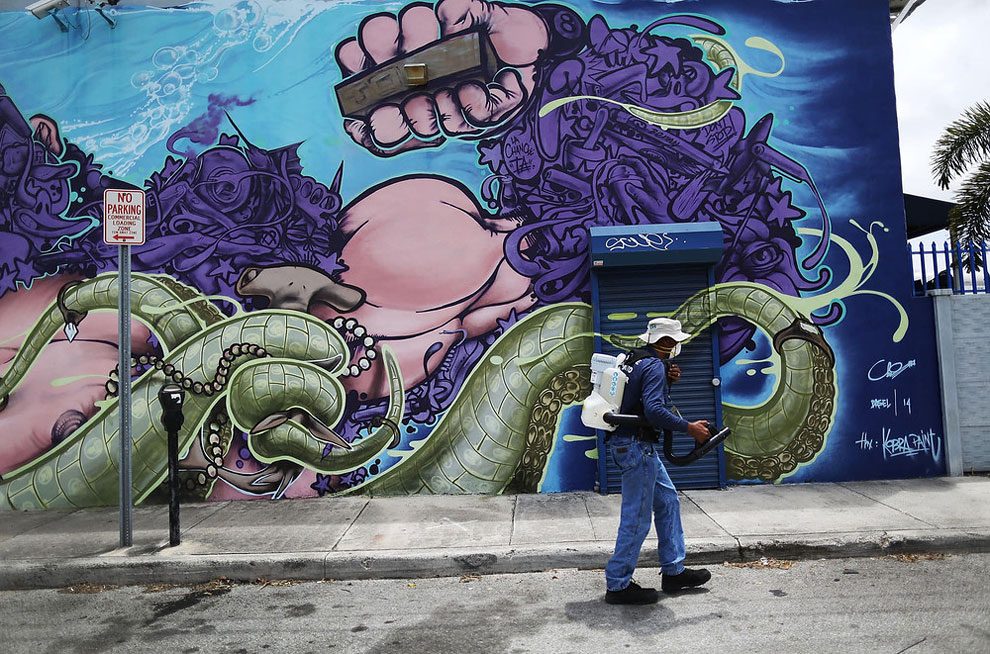 Larry Smart, a Miami-Dade County mosquito control inspector, uses a fogger to spray pesticide to kill mosquitos in the Wynwood neighborhood as the county fights to control the Zika virus outbreak on August 1, 2016 in Miami, Florida. (Photo by Joe Raedle/Getty Images) 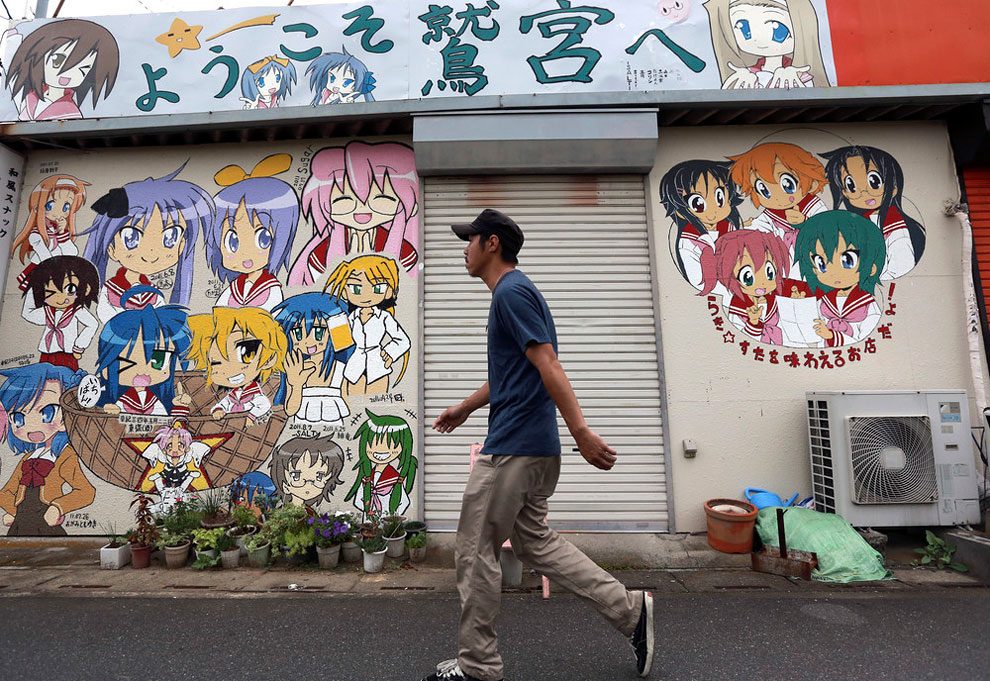 A man walks by an eatery with its facade painted with letters that read “Welcome to Washinomiya” and the characters of a TV animation series “Lucky Star” or “Raki Sta” near Washinomiya Jinja shrine in Kuki, Saitama prefecture, north of Tokyo, Friday, September 16, 2016. Eighty-eight places in Japan are going to be designated “animation spots” to encourage tourism – using train stations, school campuses, rural shrines and other fairly everyday places where popular “manga” characters are depicted. One shoo-in for the list, according to organizers, is Washinomiya Jinja, a picturesque shrine, which is a familiar scene in the comic by Kagami Yoshimizu, which later became the TV animation series. (Photo by Eugene Hoshiko/AP Photo) 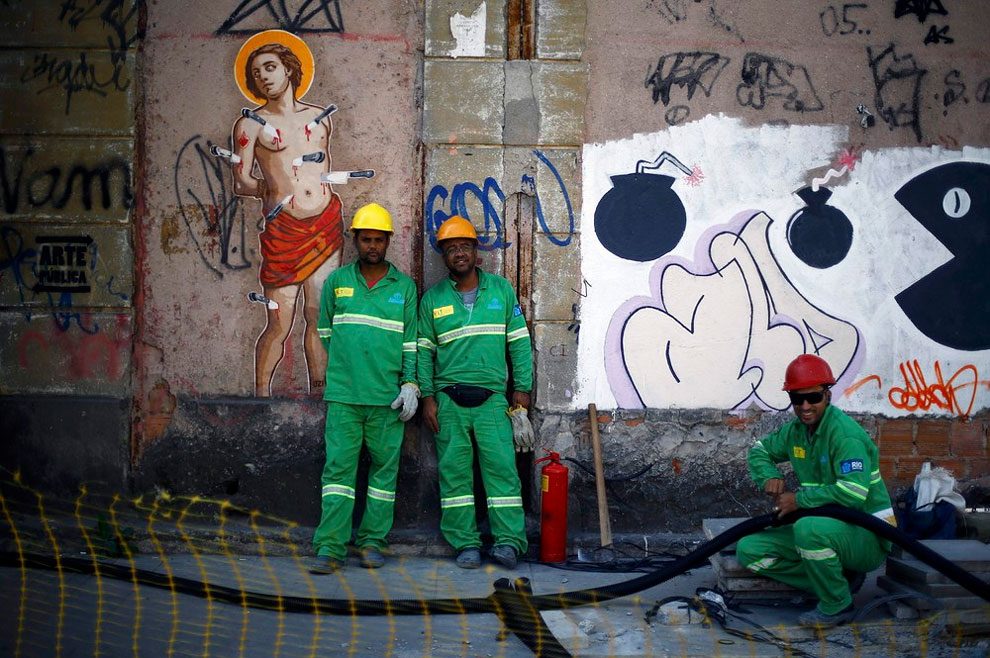 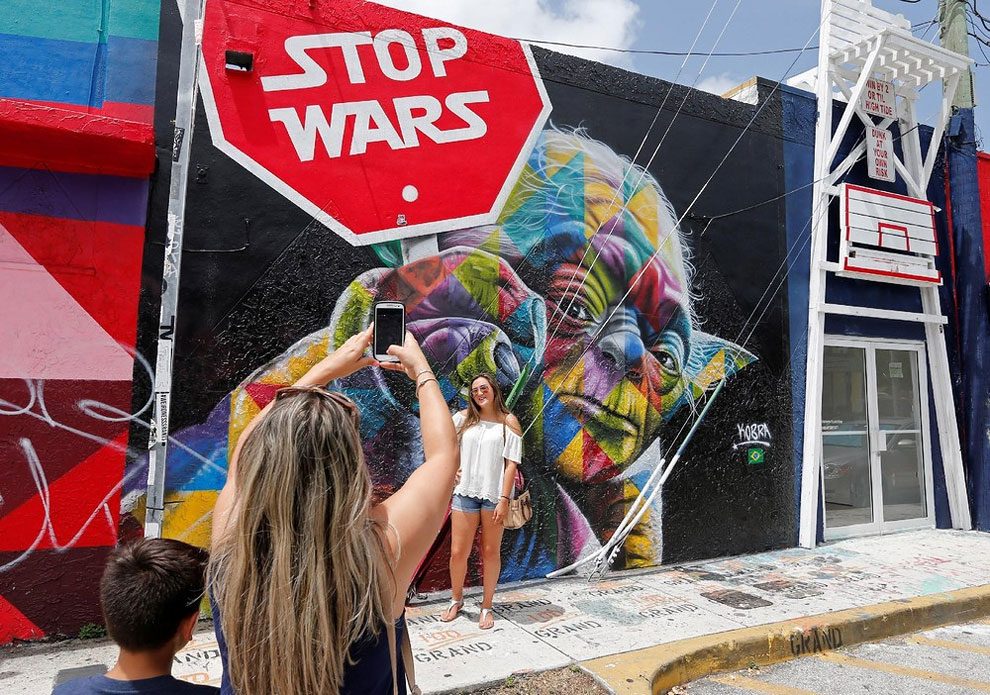 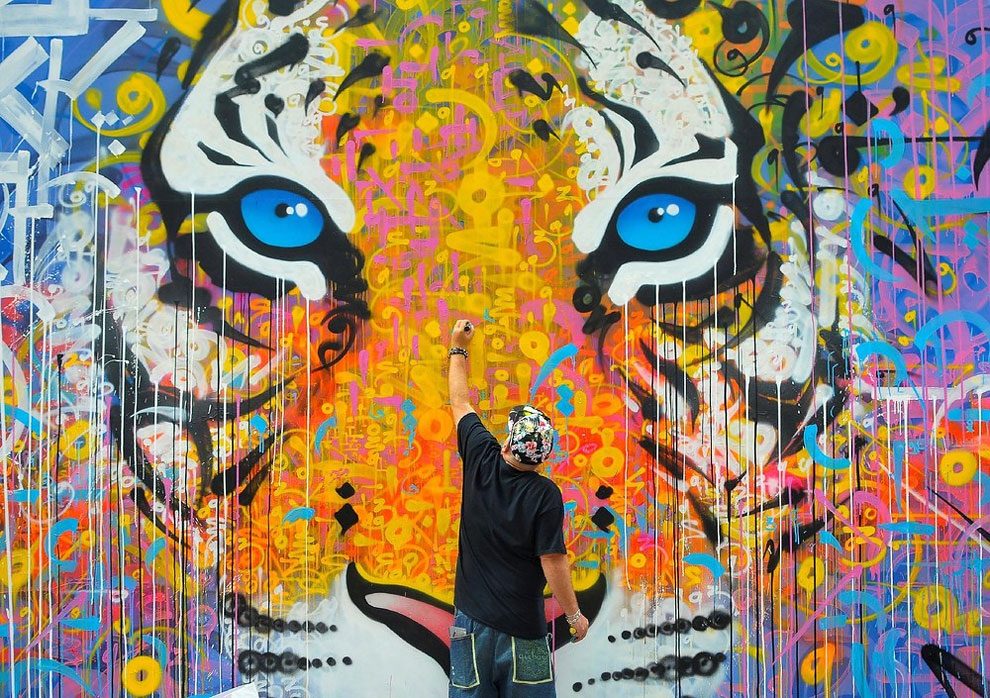 French artist Marco Clement paints a mural of a tiger on a wall in Bengaluru, India, August 19, 2016. (Photo by Abhishek N. Chinnappa/Reuters) 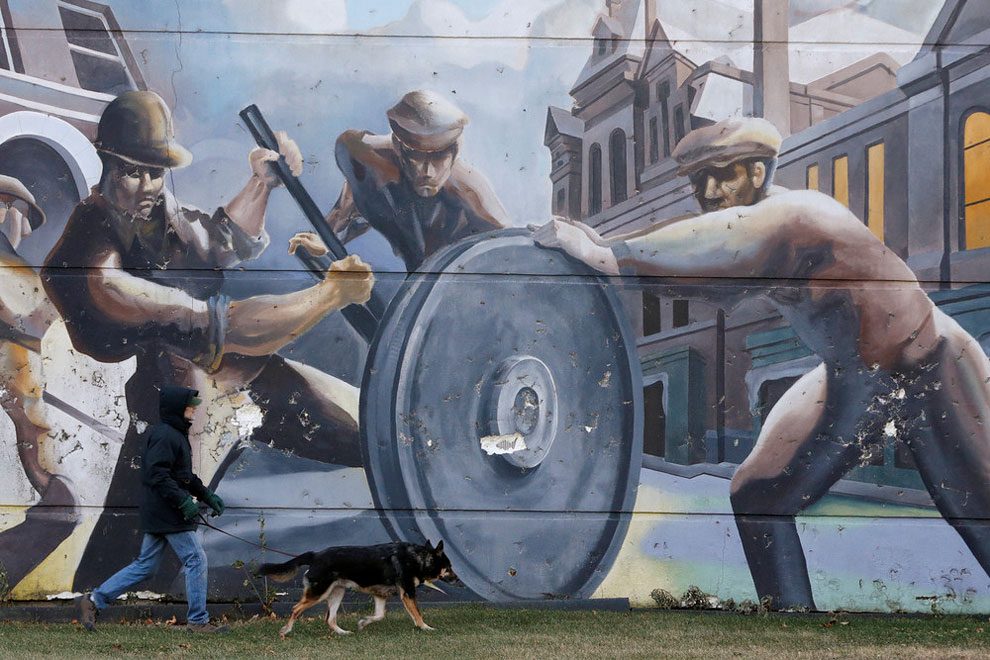 A man walks his dog past a mural depicting factory workers in the historic Pullman neighborhood in Chicago November 20, 2014. (Photo by Andrew Nelles/Reuters) 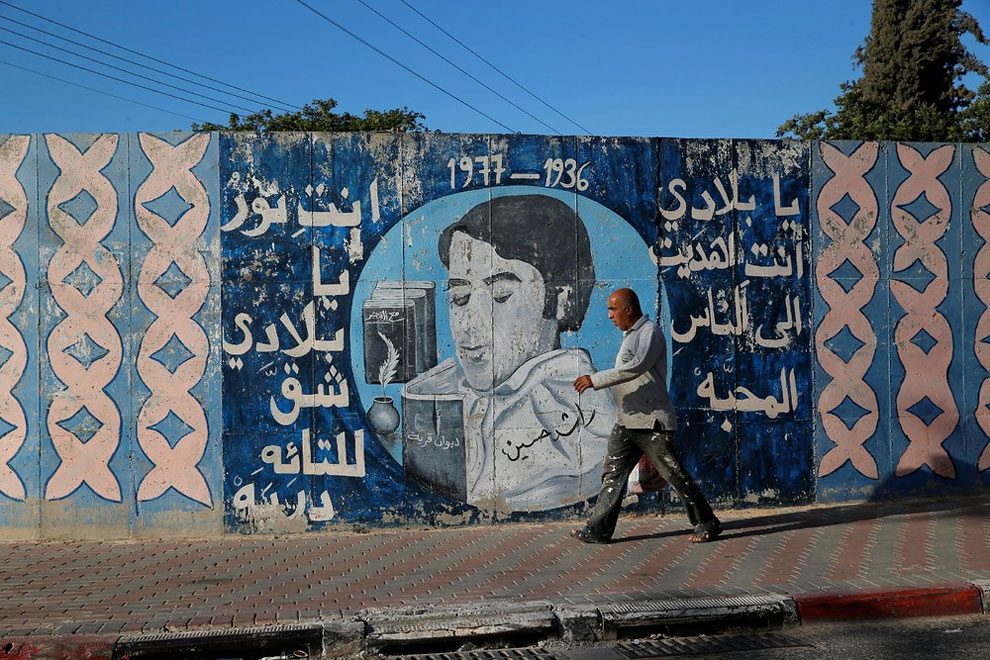 A man walks past a mural with writing in Arabic that reads, “My country, you gave us love and light which revealed paths for the lost” in the Israeli Arab city of Umm al-Fahm August 16, 2016. (Photo by Ammar Awad/Reuters) 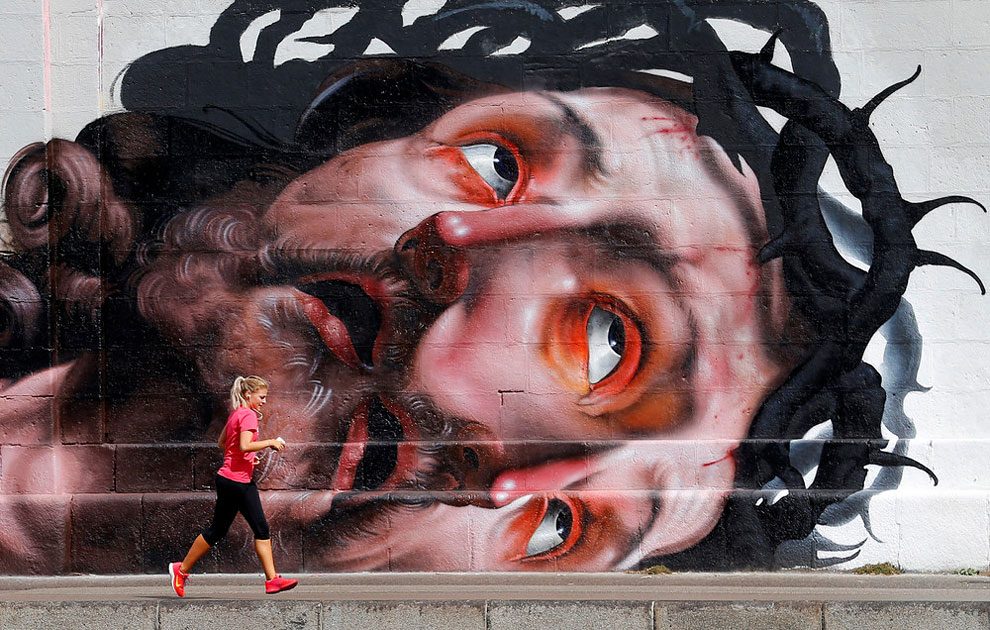 A jogger runs on the bank of Donaukanal channel in central Vienna, Austria, September 5, 2016. (Photo by Heinz-Peter Bader/Reuters) 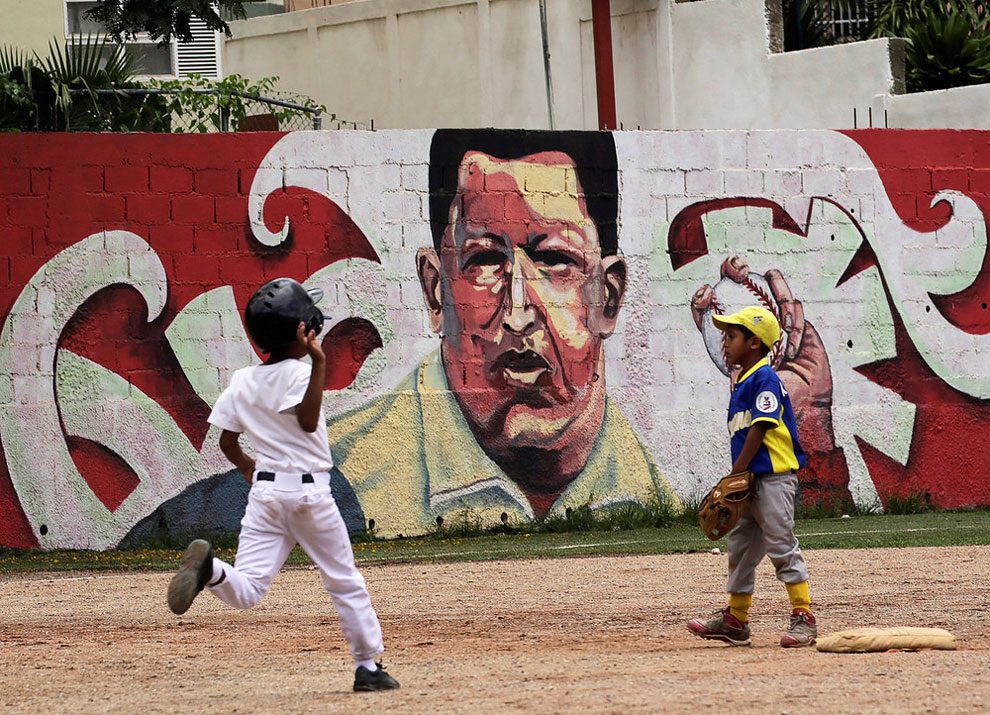 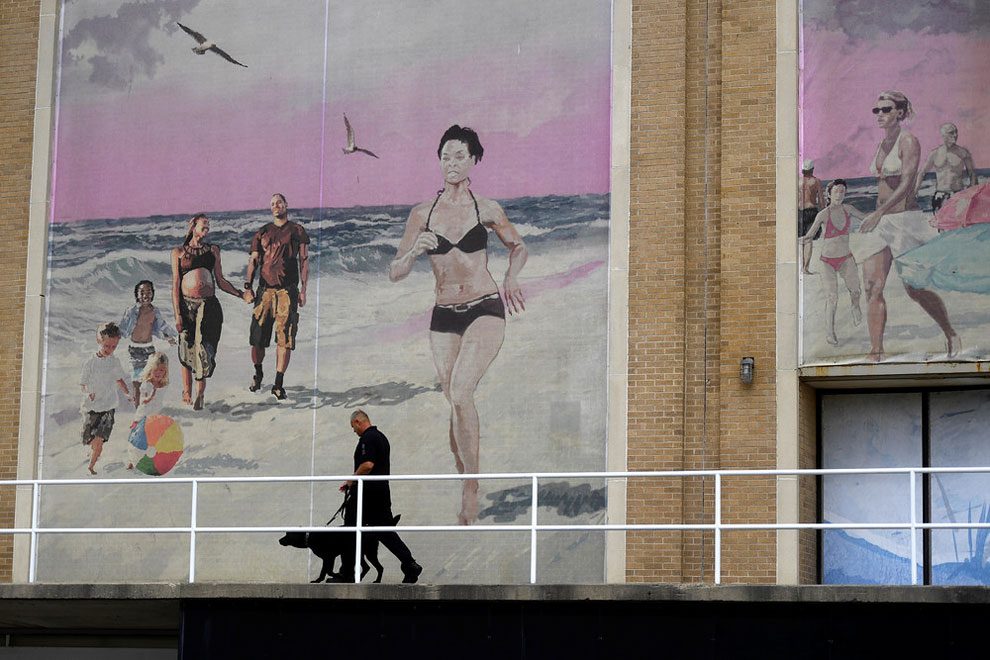 A police officer and dog patrol outside of Boardwalk Hall, the venue for the 96th Miss America Pageant that takes place tonight in Atlantic City, New Jersey September 11, 2016. (Photo by Mark Makela/Reuters) 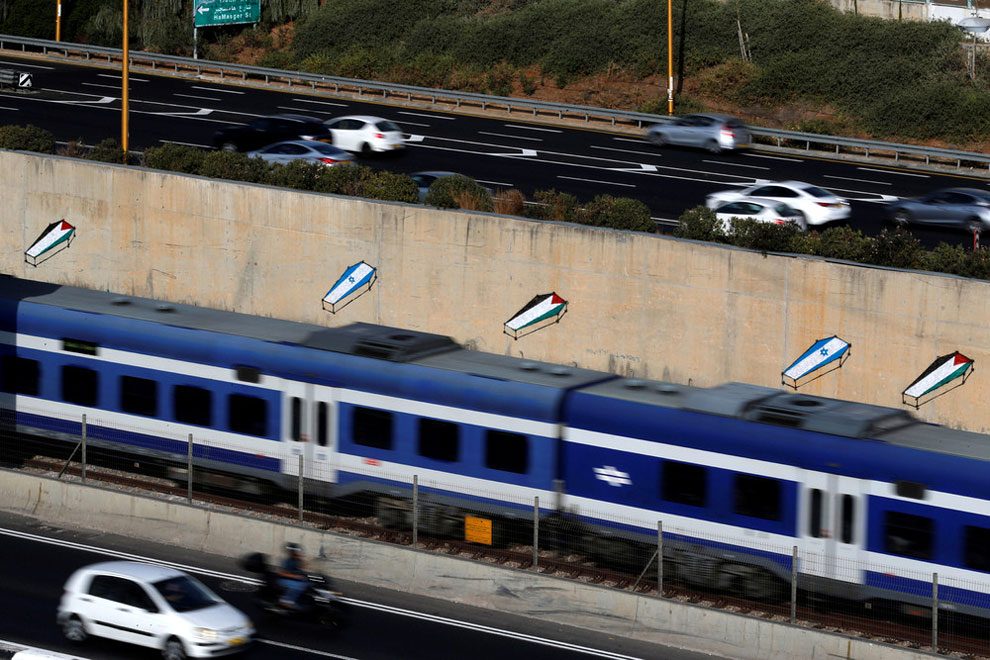 Graffiti of coffins covered in Palestinian and Israeli flags is seen on a wall running along the Ayalon highway in Tel Aviv, Israel September 14, 2016. (Photo by Amir Cohen/Reuters) 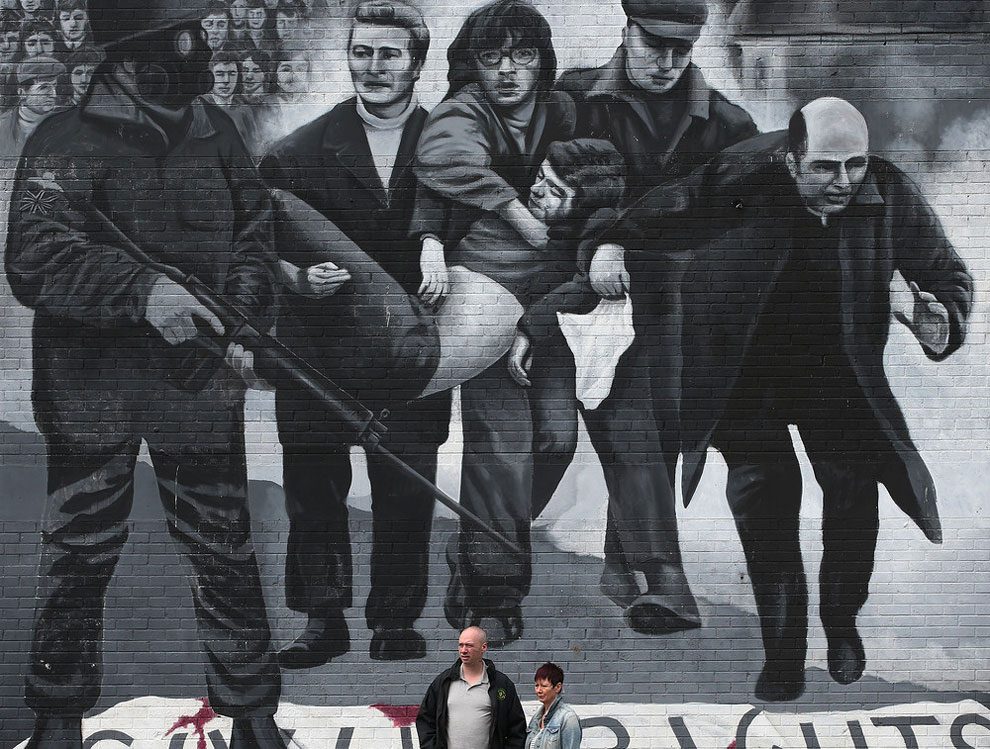 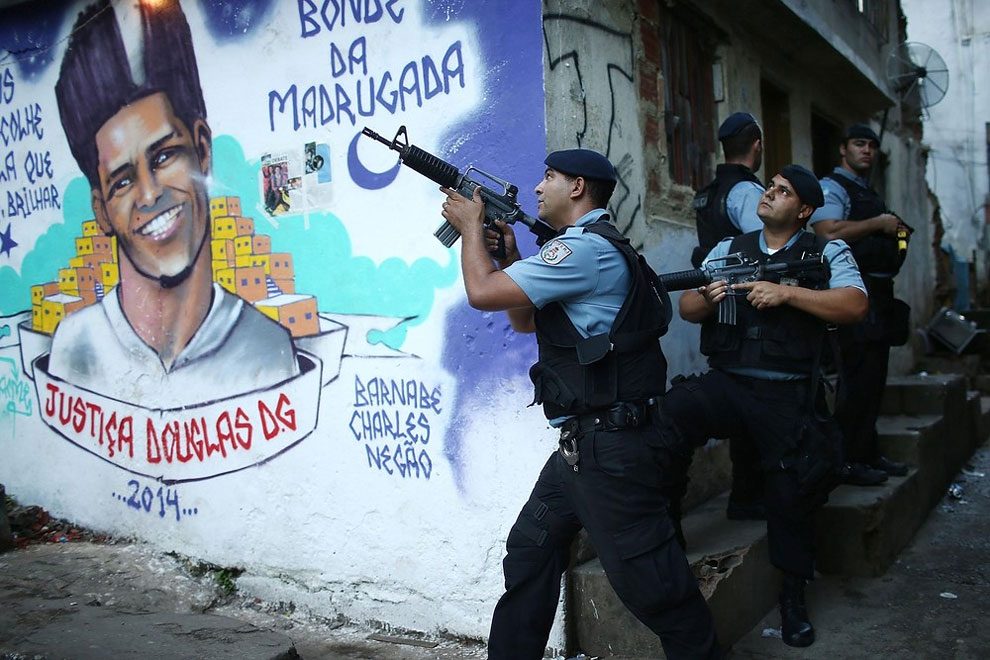 UPP (Police Pacification Unit) officers patrol next to a mural of dancer Douglas Rafael da Silva Pereira in the pacified Pavao-Pavaozinho community at the start of an investigation into the death of Pereira on May 26, 2014 in Rio de Janeiro, Brazil. (Photo by Mario Tama/Getty Images) 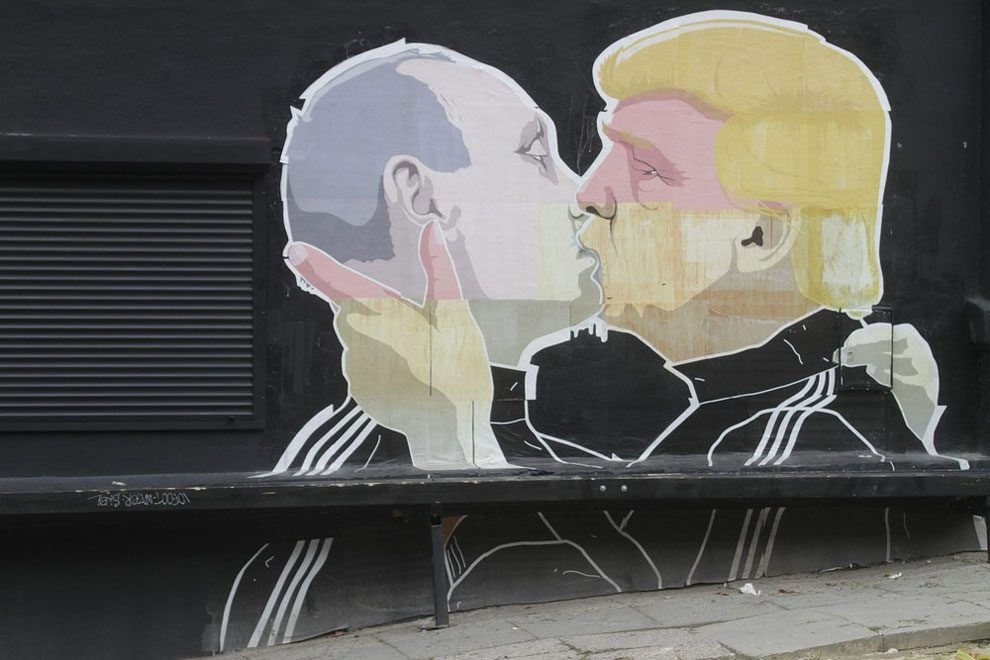 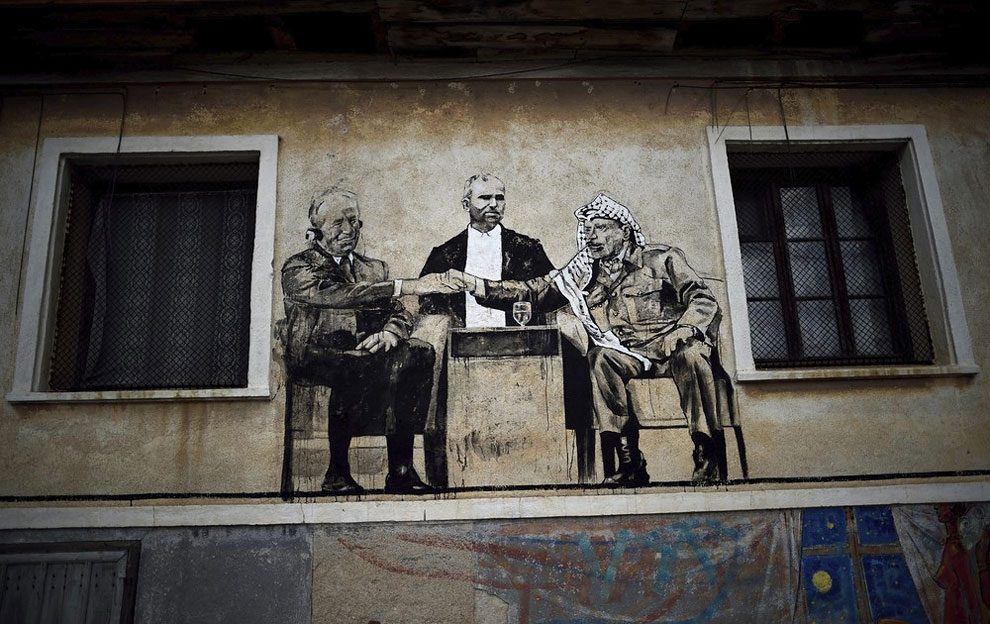 A photo made available on 31 August 2016 shows a mural depicting local man Vylka (C) with former President of Israel Shimon Peres (L) and former Palestinian leader Yasser Arafat (R), painted during a mural festival on a wall in the village of Staro Zhelezare some 14km from Sofia, Bulgaria, 30 August 2016. The project was initiated by the artistic duo Katarzyna and Ventzi Piryankova living permanently in Poznan, Poland. The festival is titled “Village of personalities / Art for Social Change”. The project started in 2013 and there have been created about 53 paintings in the village, representing local people in company of celebrities from politics and culture. (Photo by Vassil Donev/EFE) 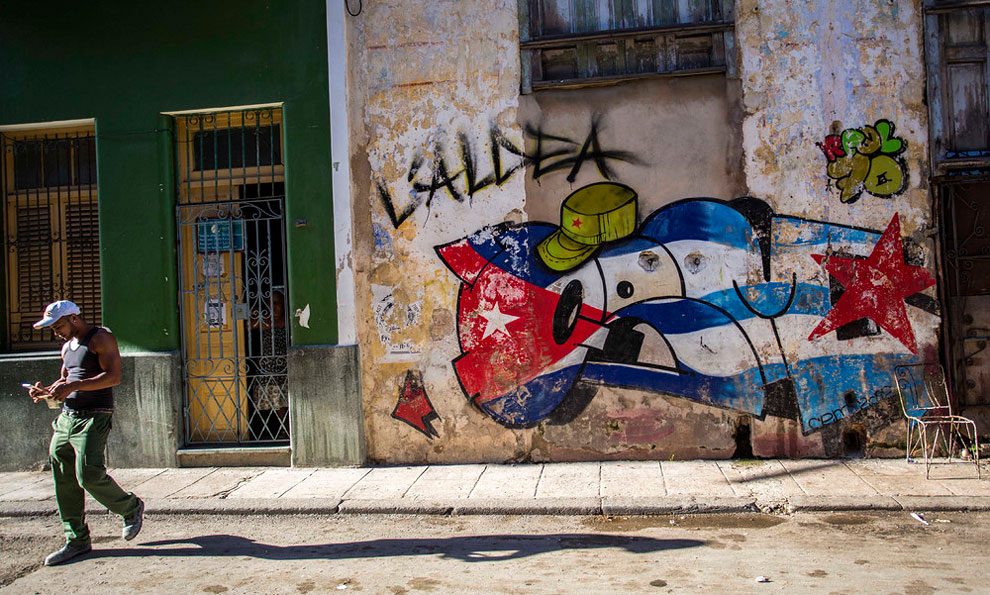 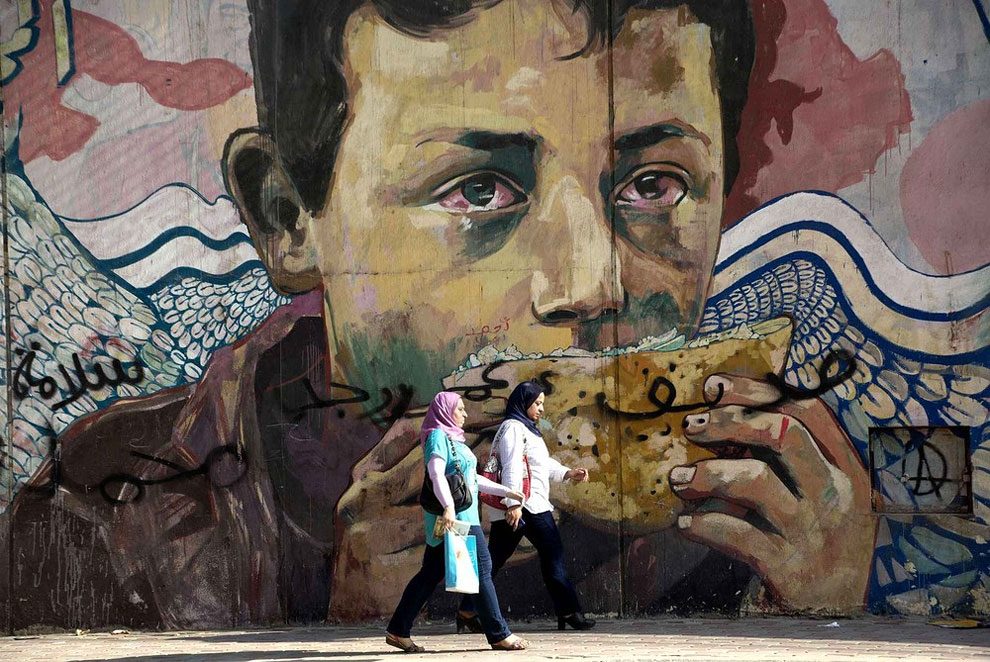 Egyptians walk in front of a mural related to the January 25, 2011 revolution, near Tahrir Square in Cairo, Egypt, Wednesday, August 10, 2016. Three Egyptian dailies said that Cairo was proposing to IMF delegates an 18-month reform program in return for a $12 billion loan over three years to shore up its economy, but that differences remained between the two sides on how to proceed. (Photo by Amr Nabil/AP Photo) 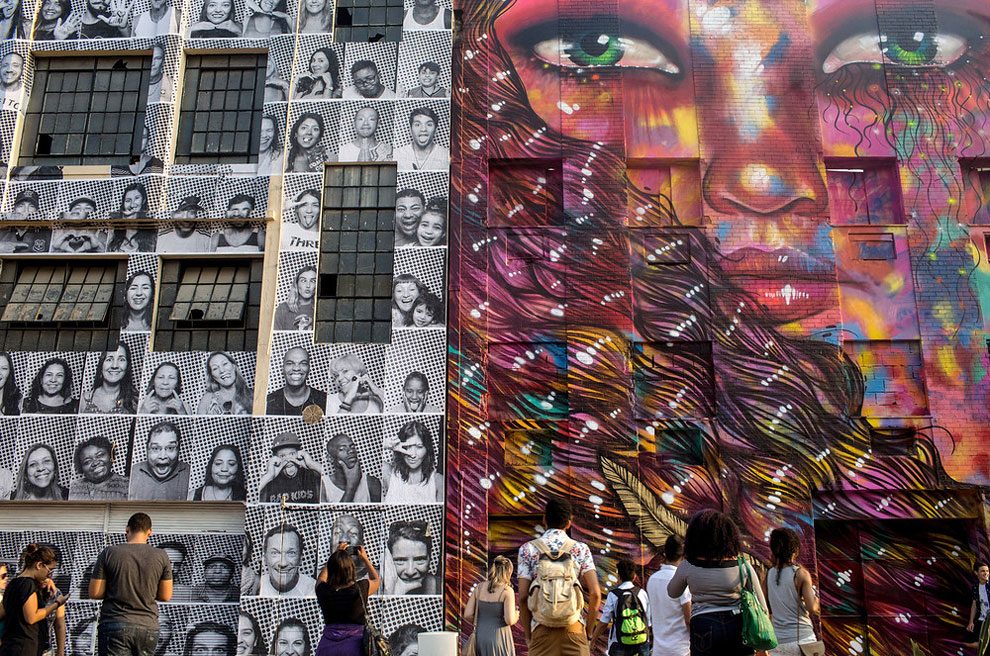 People walk in front of portraits produced by artist JR for his inside out project (L) on August 9, 2016 in Rio de Janeiro, Brazil. The artist JR has unveiled numerous art installations across Rio de Janiero celebrateing olympic athletes. (Photo by Chris McGrath/Getty Images)

This file photo taken on August 8, 2016 shows a young migrant runing after a ball in the street of Via Cupa outside the former Baobab migrants reception centre next to the Tiburtina train station in Rome. Every night the same scene unfolds in Via Cupa near Rome’s Tiburtina station: one by one, migrants take a dirty and battered mattress from a pile and place it against the wall, turning the small dark street into a star-lit dormitory. Set up almost three years ago the Baobab centre was shut down by police in December 2015 in the wake of Paris attacks. But Baobab volunteers quickly set up a camp on the street in front of the old shelter with tents and chemical toilets, serving three meals a day. (Photo by Filippo Monteforte/AFP Photo) 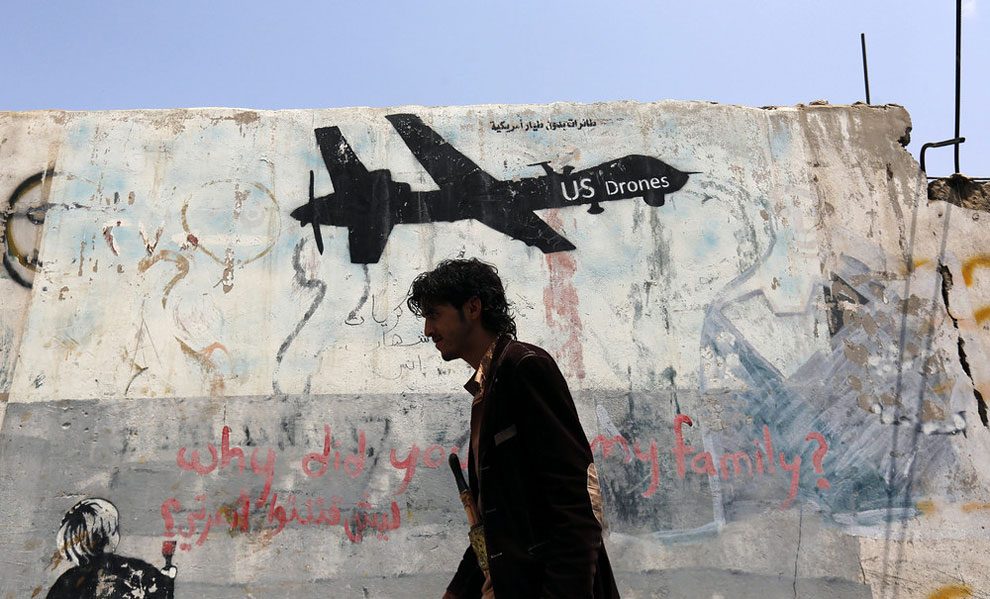 A Yemeni walks past graffiti protesting US drone operations in Yemen, few hours after a US drone attack on suspected al-Qaeda militants, Sana’a, Yemen, 05 September 2016. According to reports, a fresh round of US drone attacks on 05 September in Yemen led to the death of at least six suspected members of al-Qaeda in the Arabian Peninsula (AQAP) in Yemen’s northeast province of Marib. (Photo by Yahya Arhab/EPA)

50 Awesome and Colorful Photoshoots of the 1970s Fashion and Style Trends
'The Ring' Doughnut And 'Game Of Thrones' Cake: Introducing Lou Lou P And Her Incr-Edible Food Art
Anime Style Body Paint Model Dazzles With The Most Colorful Fashion In Japan
Artist Curtis Talwst Santiago Tansforms Antique Jewellery Boxes Into Tiny Dioramas
Beautiful And Mysterious Forest Sculptures By Spencer Byles
The Porcelain Figurines Project – The Culmination Of High-Speed Photography
Taiwanese Artist Lives Large Dreams In Miniature Models
Dimensions Blur In Aakash Nihalani’s Minimalist Optical Illusions
Barcelona Floors: Photographer Inspires Us To Look Down And Discover City’s Culture
Artist Jocelyn Teo Creates A Tiny Food You Can't Eat
IKEA-Inspired Manuals Will Teach You How To Get Over A Breakup
This Dadbag Was Made For People Who Want A Dad Bod Without Eating Junk Food
Blackout Tattoos Are A Bold New Trend Popping Up Around The World
Barista Uses Food Dye To Create Colorful Latte Art
This Life-Size Detective Pikachu Plushie Commits Crime Of Stealing Our Hearts
Weird Halloween Costumes Of The 1970s And 80s
Handsome Devils Puppets: These Eerie Puppets Are Made With Human Hair, Antique Lace, And A Dead Grandmother’s Jewelry
Artist Spent Over 4 Years Illustrating Dante’s Inferno On Violins
This Chair Allows Its User To Wrap Up And Get Comfortable
Astonishing Giant Sculptures Made From Scrap Wood By Thomas Dambo
Eric van Straaten And His Realistic 3D Printed Sculptures
Santa Wants to Keep You and His Friends at The North Pole Safe This Christmas so He's Wearing a Mask
Israeli Designer Creates Unique Jewelry From City Maps
Clever Wraps That Turn Instant Pots Into R2-D2 Or BB-8
Stay Safe Carabiner: EDC Stylus, Door Hook & Box Opener
Ombre Tights Hand-Dyed By Tiffany Ju
Artist Mark Jenkins Has Reached A Whole New Level Of Trolling While Calling It Art
Artist Creates Fantastic and Detailed 'Portal to Heaven' with Paper
A.C.A.B - All Colors Are Beautiful
Think Nature – The New Vegetal Creations of French Designer Monsieur Plant
around, street, world