Breathtaking Views Of Earth From Above 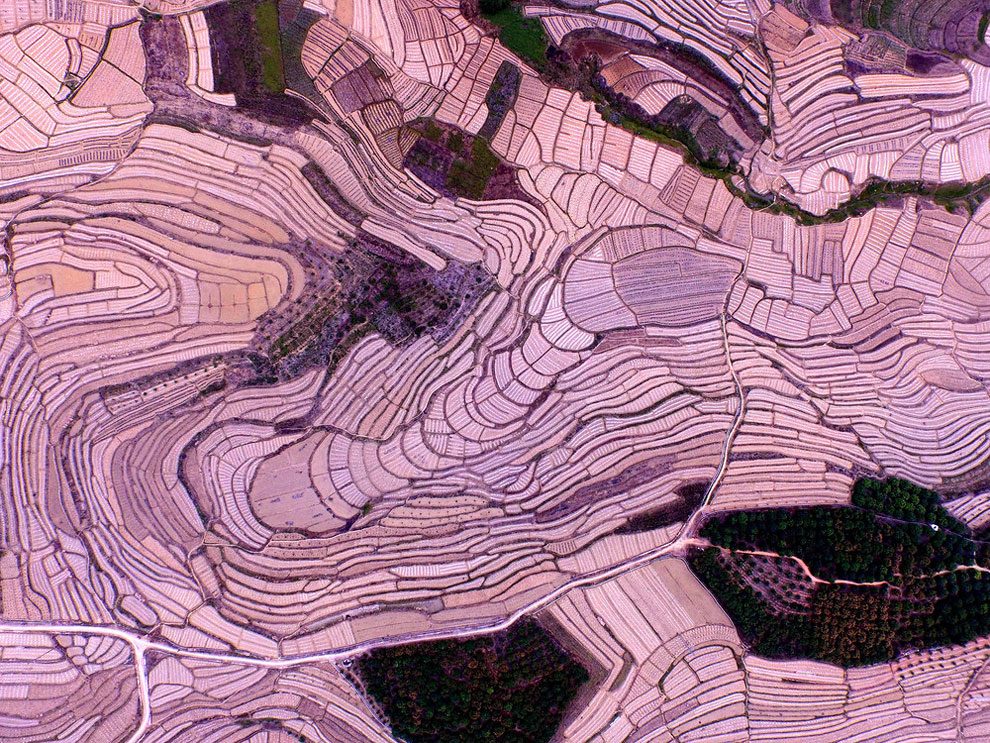 An aerial view of watermelon terraces in Xibeile Village under Yongle Township in Baise City, south China’s Guangxi Zhuang Autonomous Region on March 14, 2016. Yongle Township is the hometown of watermelons in Guangxi. The planting there covers an area of 15,000 mu (about 1,000 hectares), with an output of 28,000 tons of watermelons annually. (Photo by Huang Xiaobang/Xinhua via ZUMA Wire) 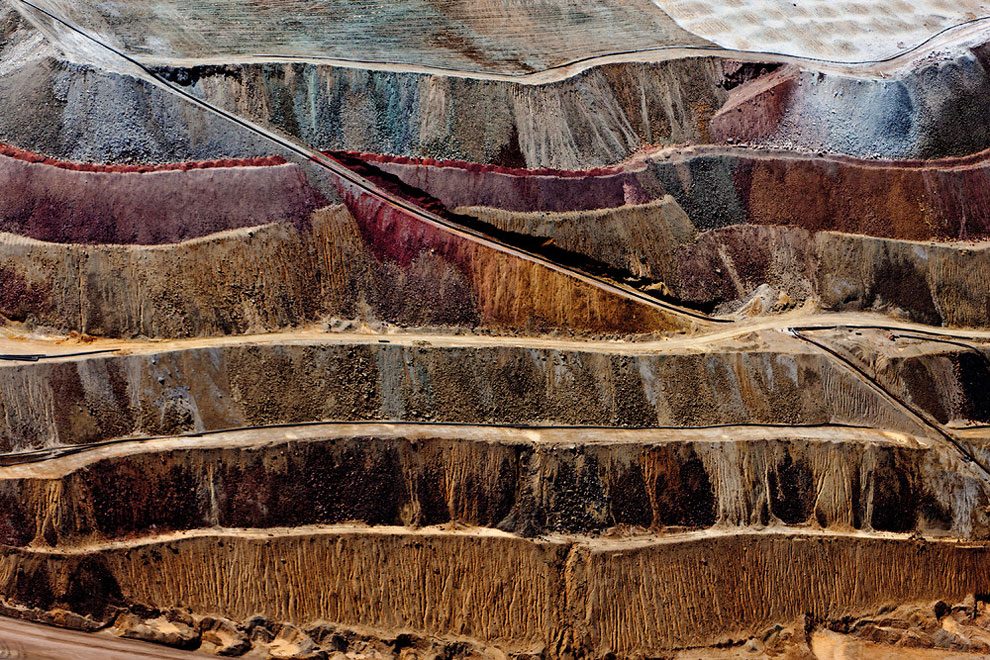 Hurley, New Mexico US. This copper mine has for centuries been the trigger for violence between Native American people and the Spanish, then Northern European immigrants. It is now worked as a large open-pit mine, where ore-bearing rock is fractured by blasting to form levels called benches, before then being removed with large diesel-electric haul trucks. Diagonal ramps carry utilities into the mine pit, bringing electricity in and pumped water out. (Photo by J. Henry Fair/Industrial Scars/Papadakis Publisher) 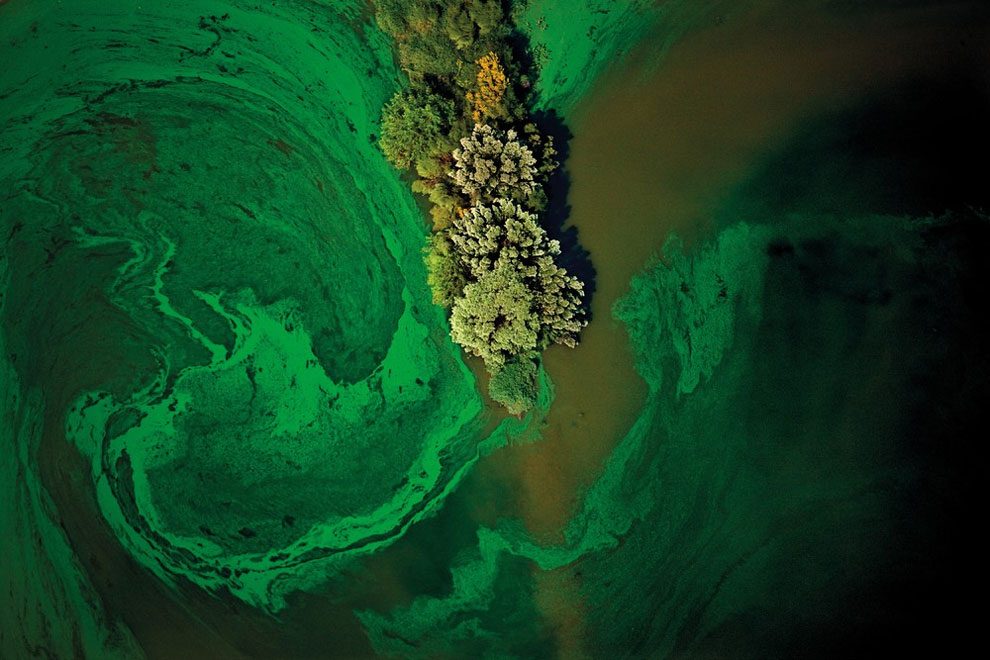 Luling, Louisiana, US. New evidence contradicts previous claims of the relative safety of glyphosate, the world’s most widely used herbicide, which is manufactured here. It is often used in conjunction with seeds that have been genetically modified to tolerate its application, meaning that anyone consuming these crops is eating a genetically modified plant, and whatever residue of the pesticide that remains. (Photo by J. Henry Fair/Industrial Scars/Papadakis Publisher) 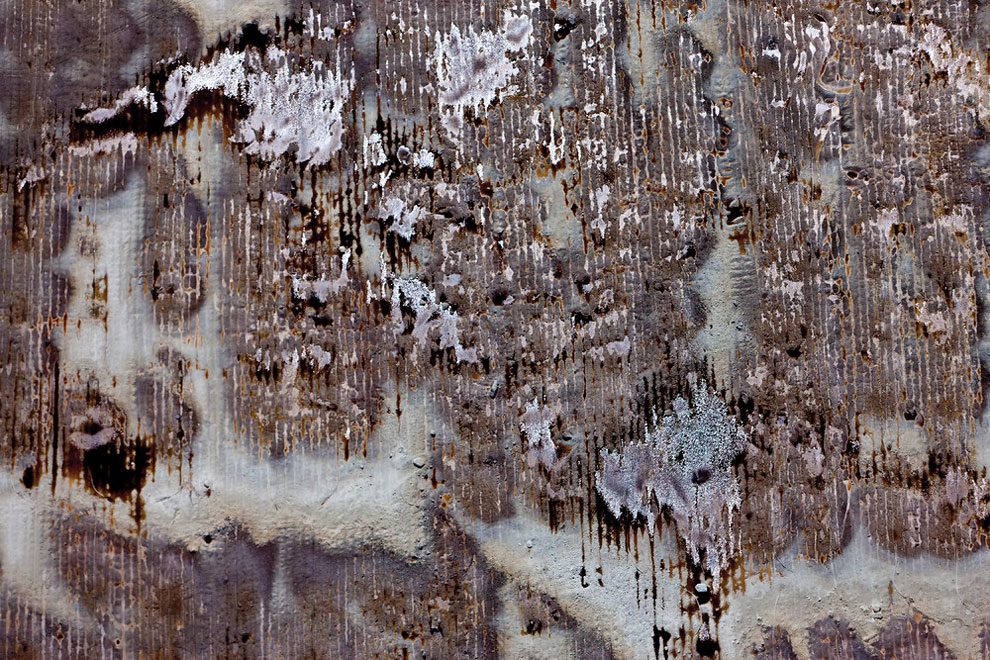 Hurley, New Mexico, US. Copper ore leaching pad at El Chino mine. A network of pipes drips dilute sulphuric acid which percolates through massive heaps of low-grade ore, leaching a solution collected at the bottom for refining to metallic copper in the solvent extraction and electrowinning process. (Photo by J. Henry Fair/Industrial Scars/Papadakis Publisher) 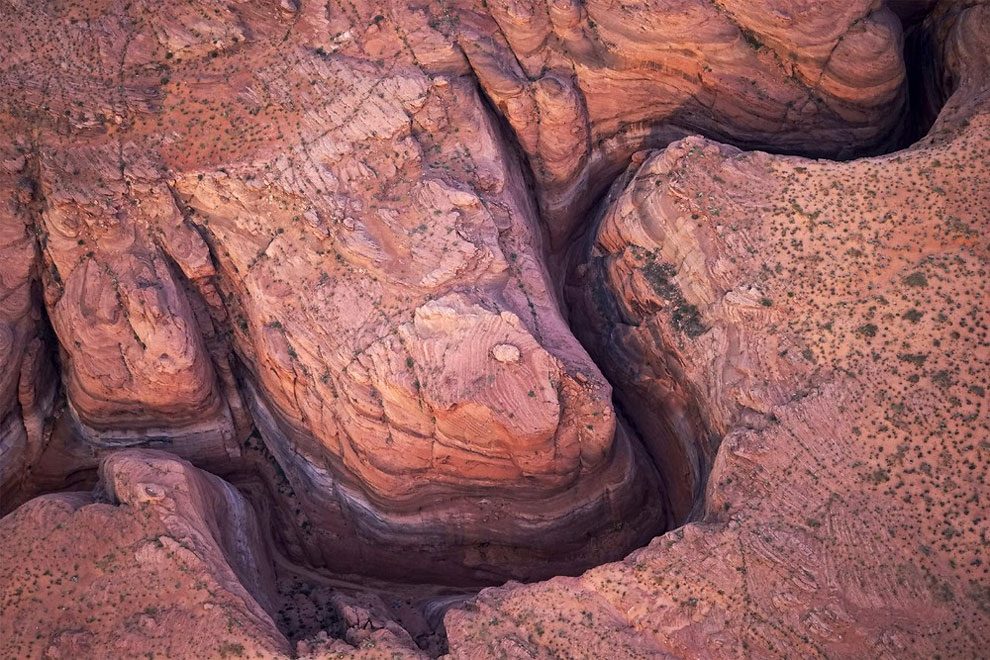 A narrow slot canyon is seen from the air at Lake Powell near Page, Arizona, May 26, 2015. (Photo by Rick Wilking/Reuters) 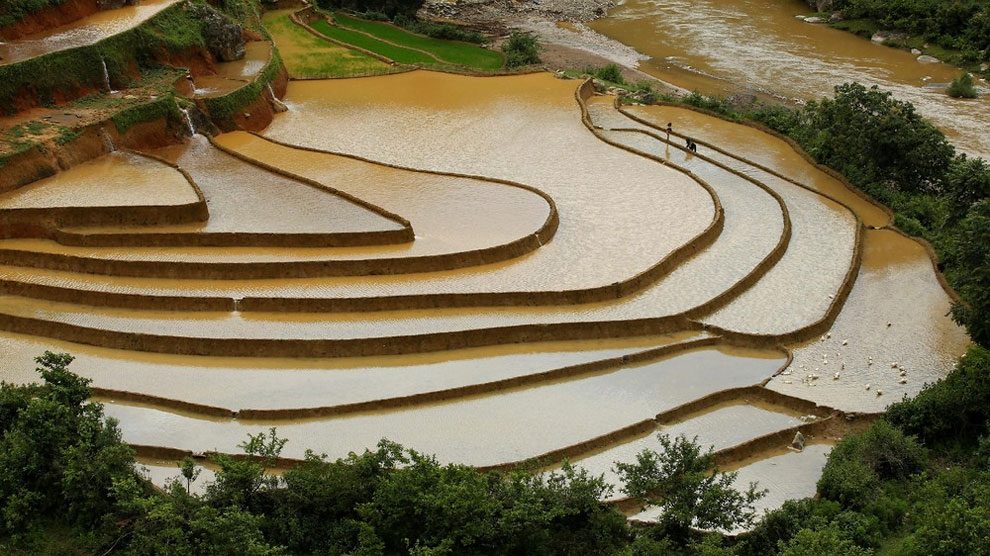 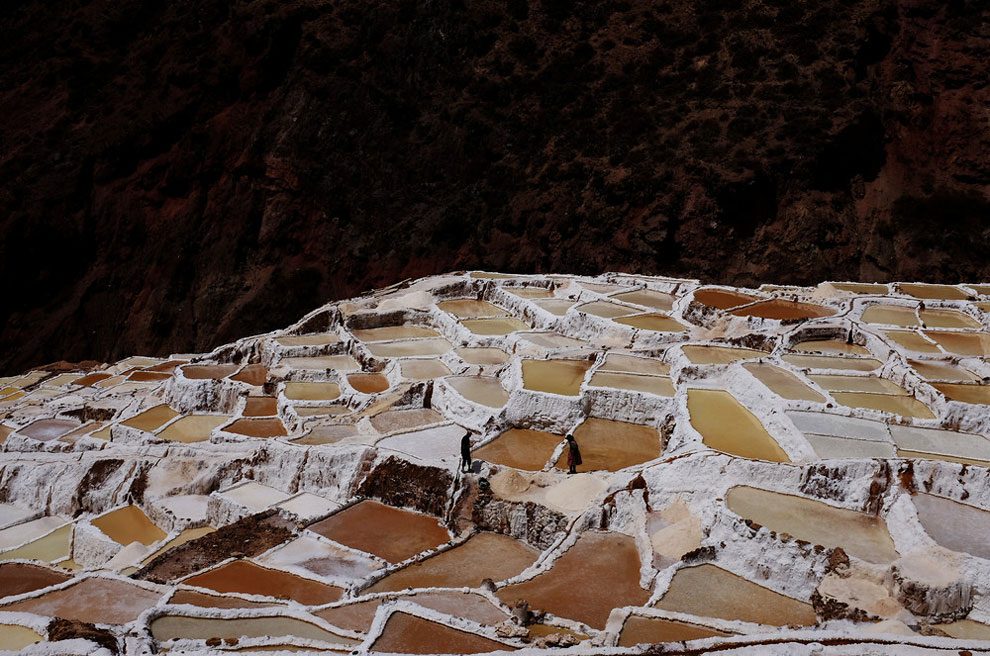 Workers stand among pools of salt at the Maras mines on a mountain at the Urubamba valley in the Andean region of Cusco, Peru, September 28, 2016. (Photo by Nacho Doce/Reuters) 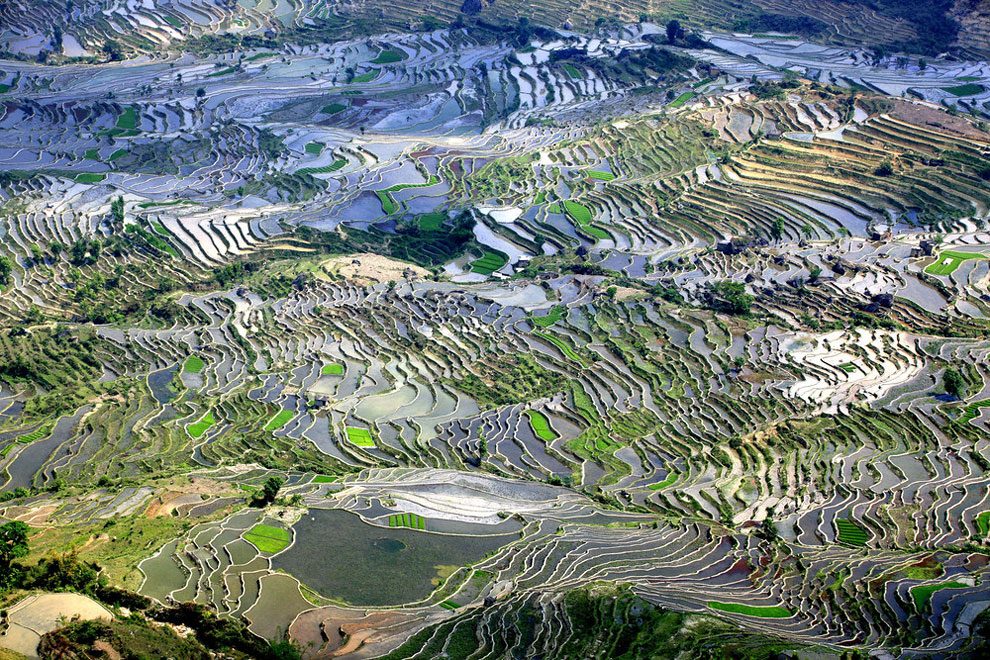 Farmers have started planting rice seedlings in the terraced fields of Honghe county in Yunnan, China on April 14, 2016. (Photo by Xinhua/Barcroft Media) 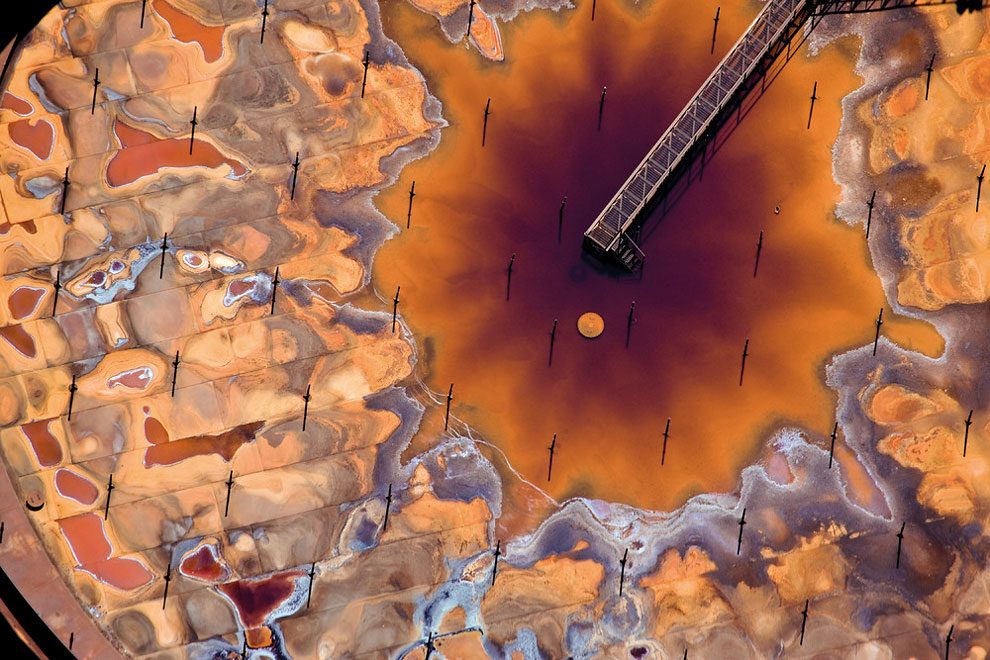 Fort McMurray, Canada. The first step in the oil sands process after extraction is “upgrading”, in which particulate matter is removed from the bitumen and its viscosity reduced so that refineries can process it. This is a photograph of the top of a petroleum tank, with a walkway out to the covered inspection hatch in the centre. This tank stores 400,000 to 500,000 barrels of the world’s dirtiest oil, obtained by excavating large areas of Canadian tar sands. (Photo by J. Henry Fair/Industrial Scars/Papadakis Publisher) 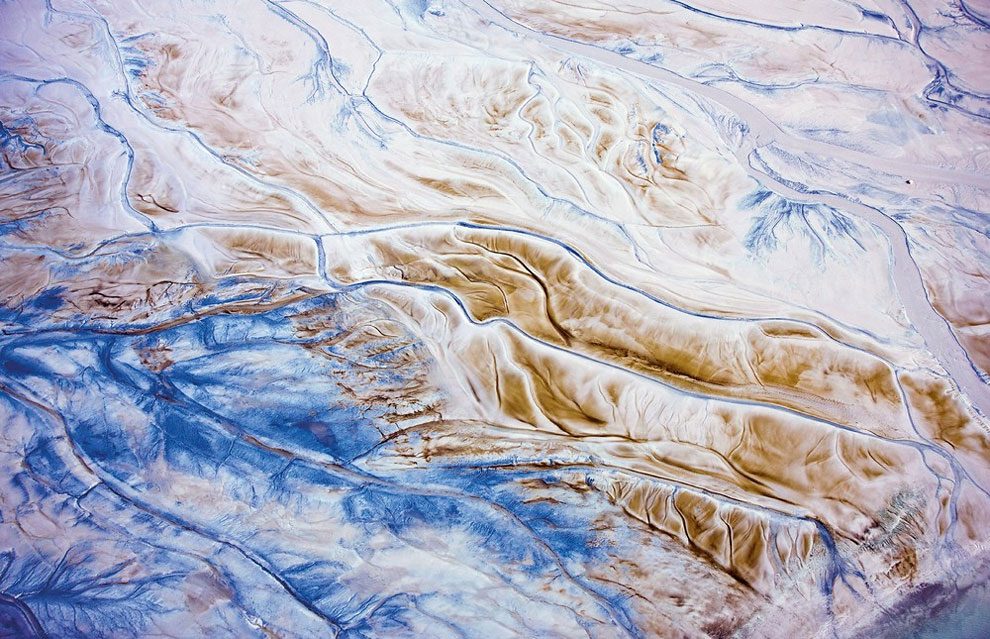 Kiruna, Sweden. Waste impoundment at the Kiruna iron mine. The mine draws on the world’s largest underground deposit of magnetite, a rich ore containing 60% iron as well as unwanted rock that is separated and disposed of in large waste impoundments. (Photo by J. Henry Fair/Industrial Scars/Papadakis Publisher) 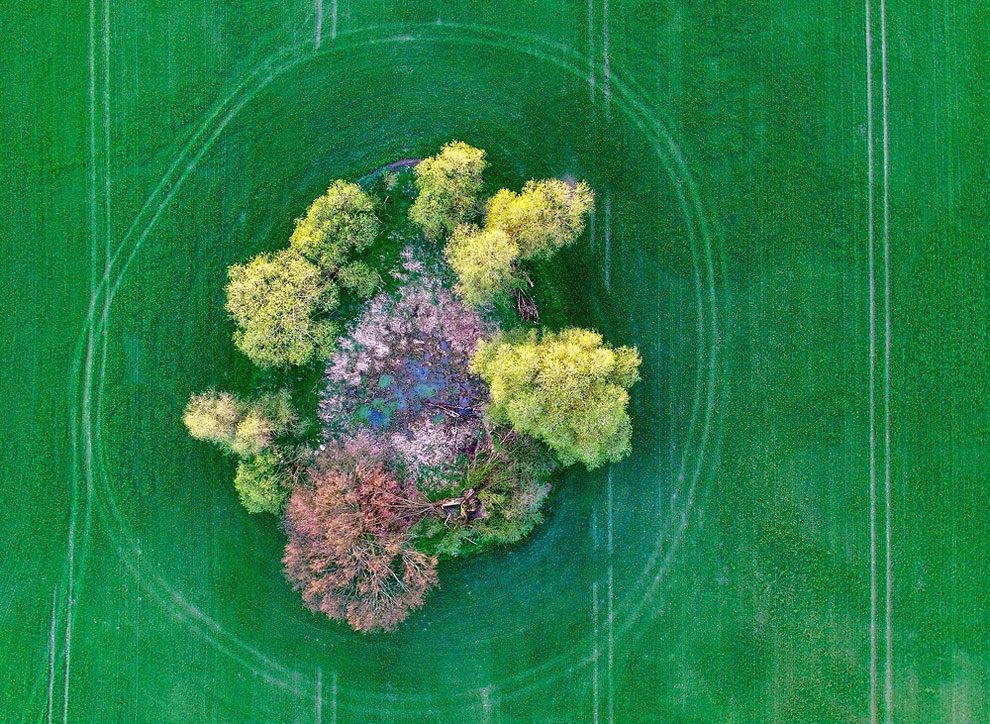 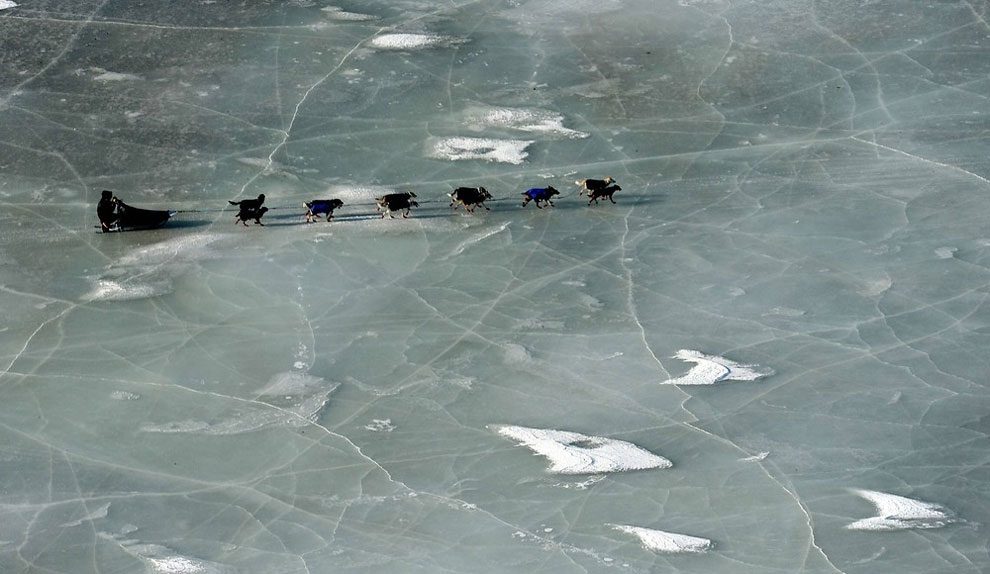 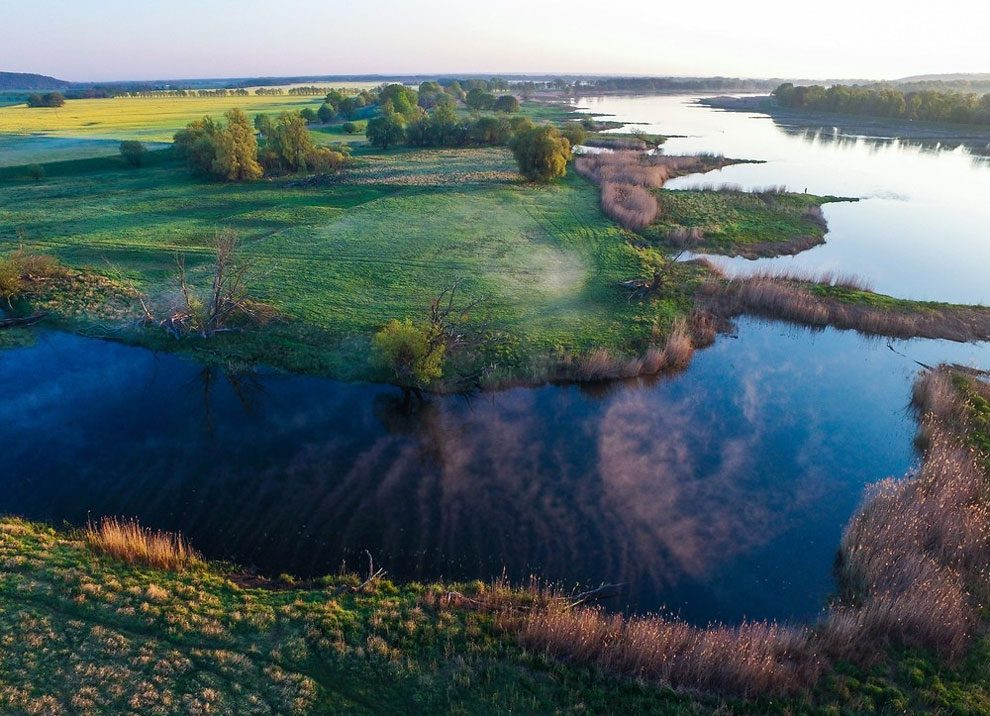 An aerial view image taken with a drone shows steam rises in the morning, shortly after sunrise, from the water of the German-Polish border River Oder near of Reitwein im Oderbruch, Brandenburg, 06 May 2016. (Photo by Patrick Pleul/EPA) 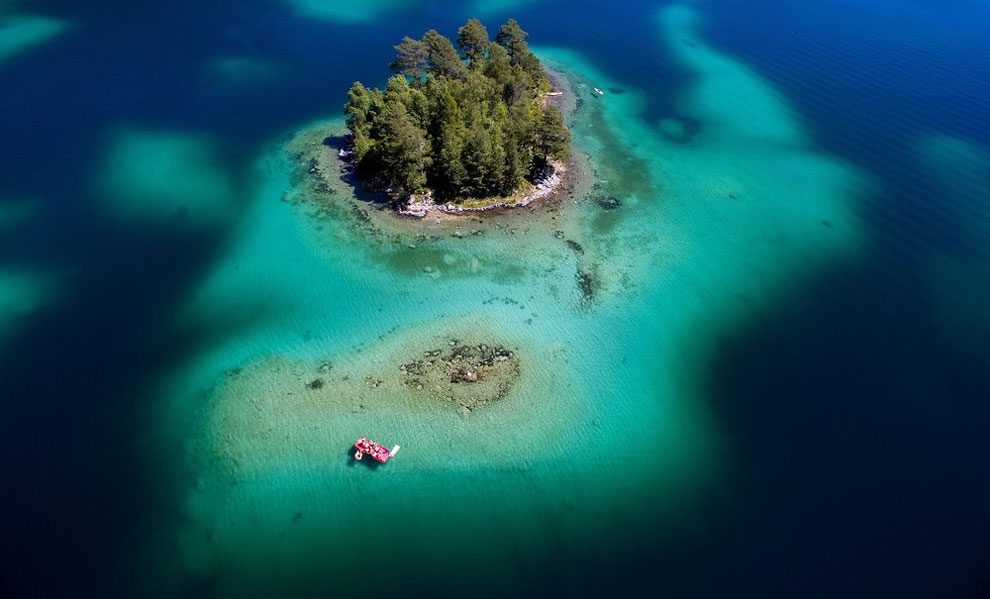 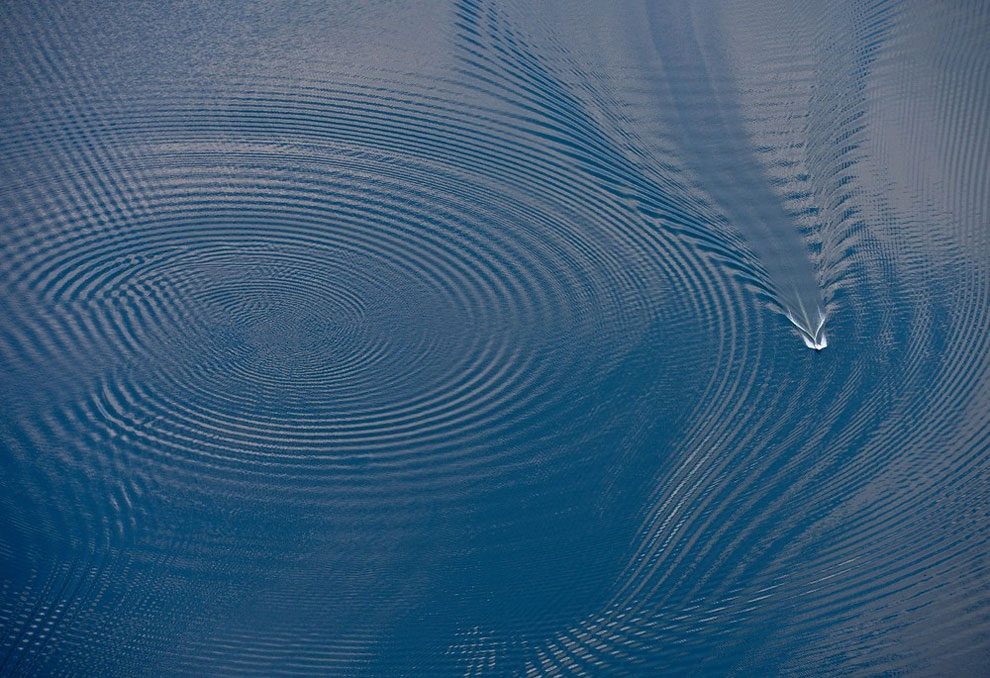 An aerial view shows a boat making its way on the Scharmuetzelsee near Bad Sarow, eastern Germany on April 29, 2014. (Photo by Patrick Pleul/AFP Photo/DPA) 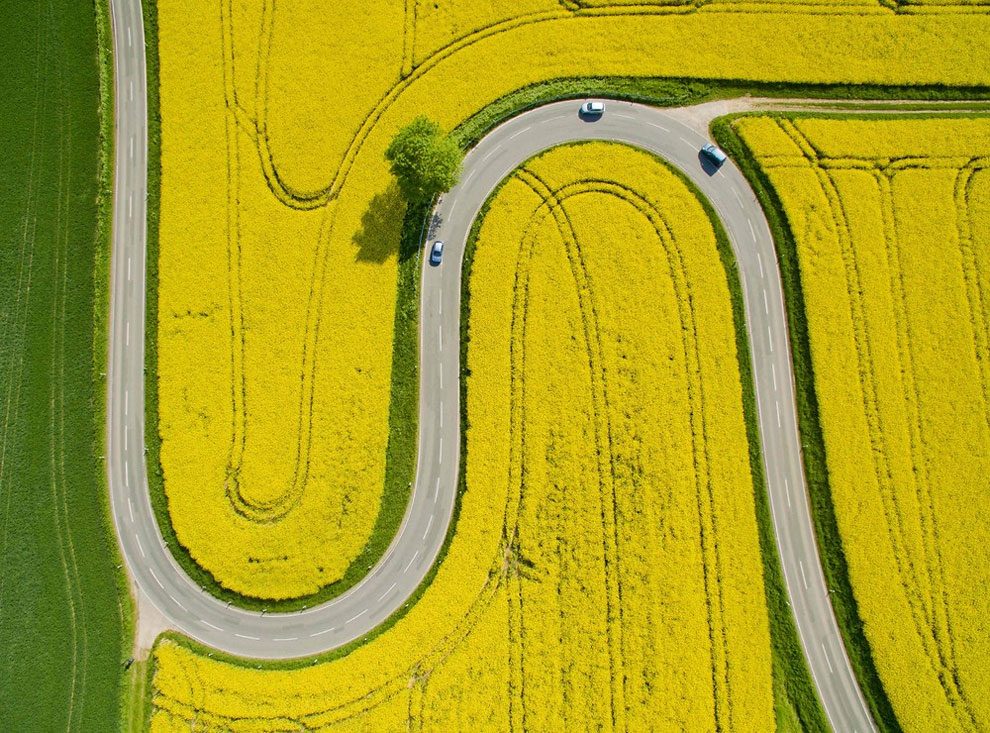 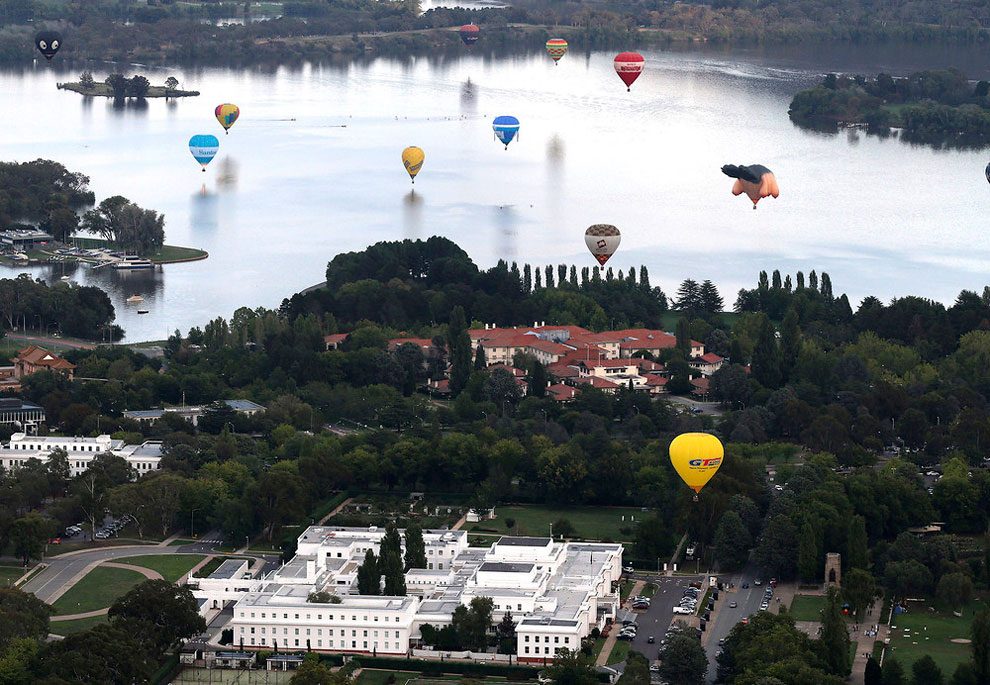 New Roads, Louisiana, US. This coal ash power plant is the 27th worst carbon emitter of US power plants, one of the 50 worst mercury polluters, and is known to be contaminating the groundwater around it with selenium which is leaching from its ash waste ponds. Coal ash is known to contain a variety of toxins including lead, mercury, arsenic, cadmium, boron, selenium. (Photo by J. Henry Fair/Industrial Scars/Papadakis Publisher) 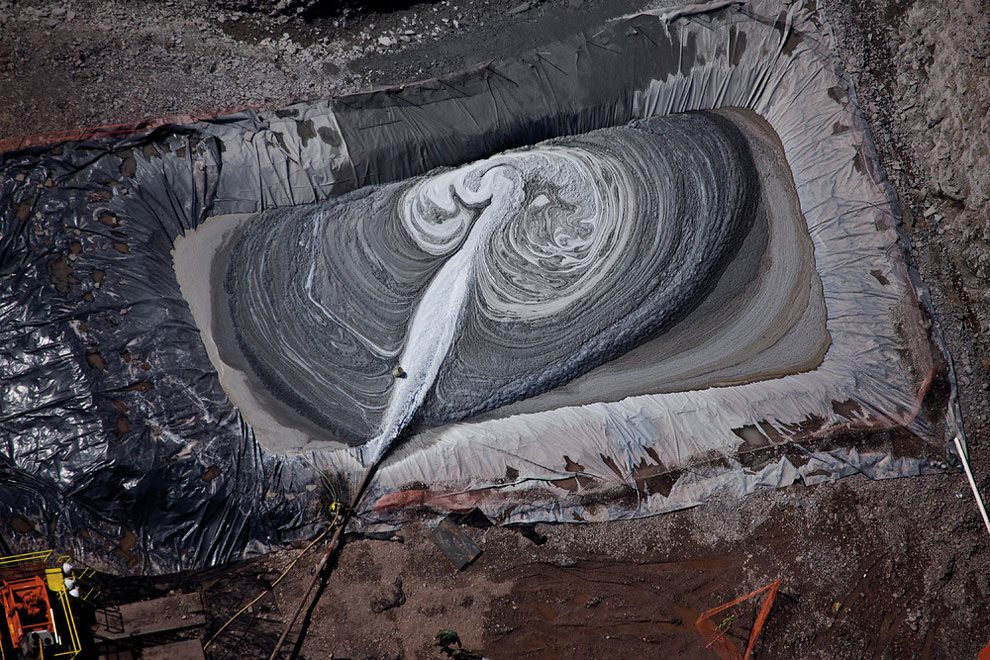 Springville, Pennsylvania, US. Collection pit for drilling waste containing ground rock, drilling muds (the lubricants and chemicals used during drilling), and in some cases radioactive material existing in the target shale layer. The overspray at the top is a violation and a danger to any water bodies downhill. (Photo by J. Henry Fair/Industrial Scars/Papadakis Publisher) 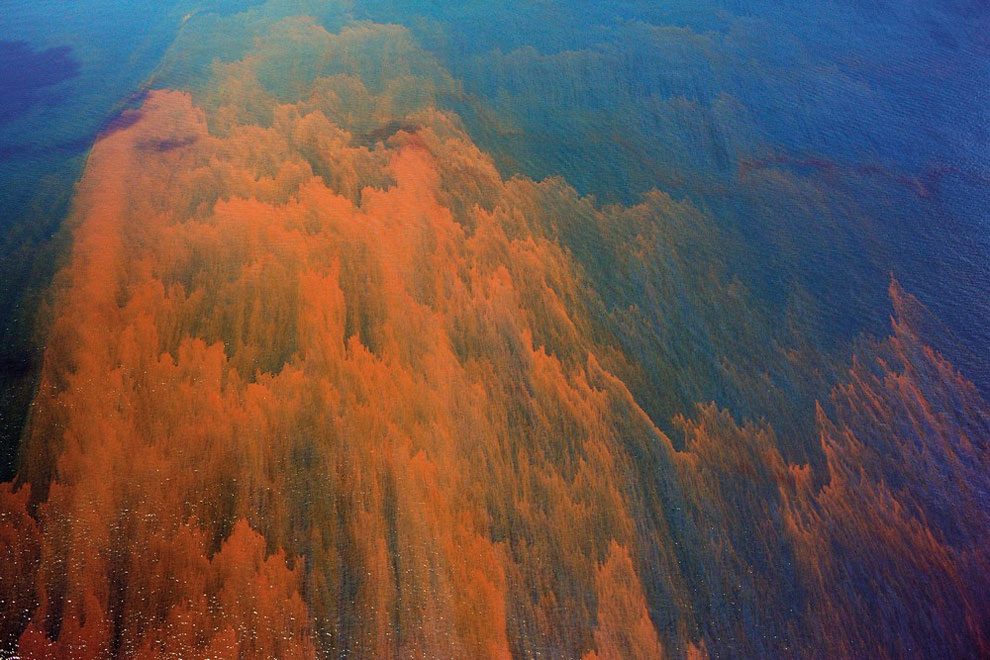 Gulf of Mexico, US. The failed BP Macondo well emitted natural gas as well as liquid hydrocarbon contaminants of different composition and viscosity. The gas percolated into the atmosphere invisibly. The liquids, which contained suspended solids, were of different densities which floated at different levels. The oil was treated with Corexit, a dispersant chemical designed to mix with and alter surface tension of the oil and ultimately break it up and sink it. The oil in this photo is floating just under the water’s surface. (Photo by J. Henry Fair/Industrial Scars/Papadakis Publisher) 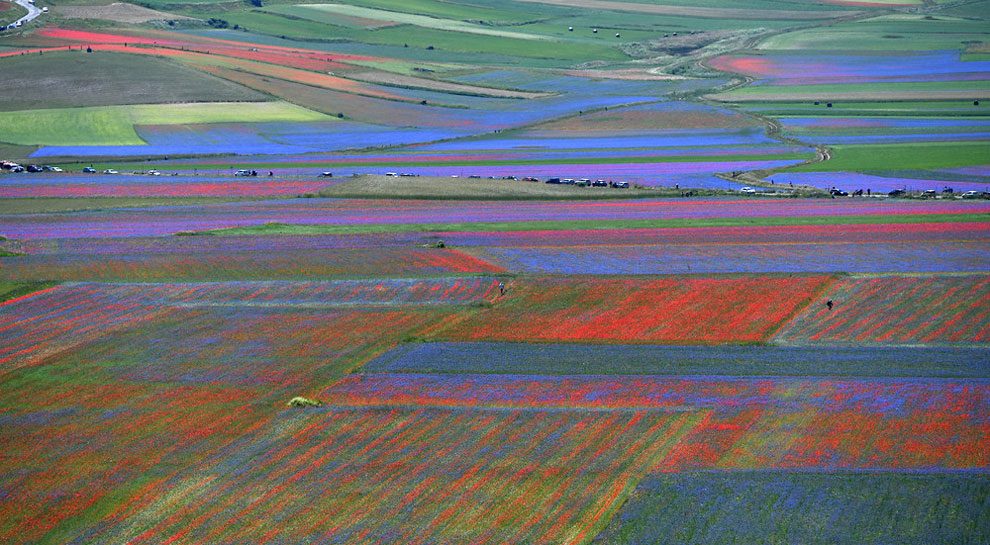 This picture taken on July 12, 2016 shows flowers in bloom including lentil fields and poppies near Castelluccio, a small village in central Italy’s Umbria region. (Photo by Tiziana Fabi/AFP Photo) 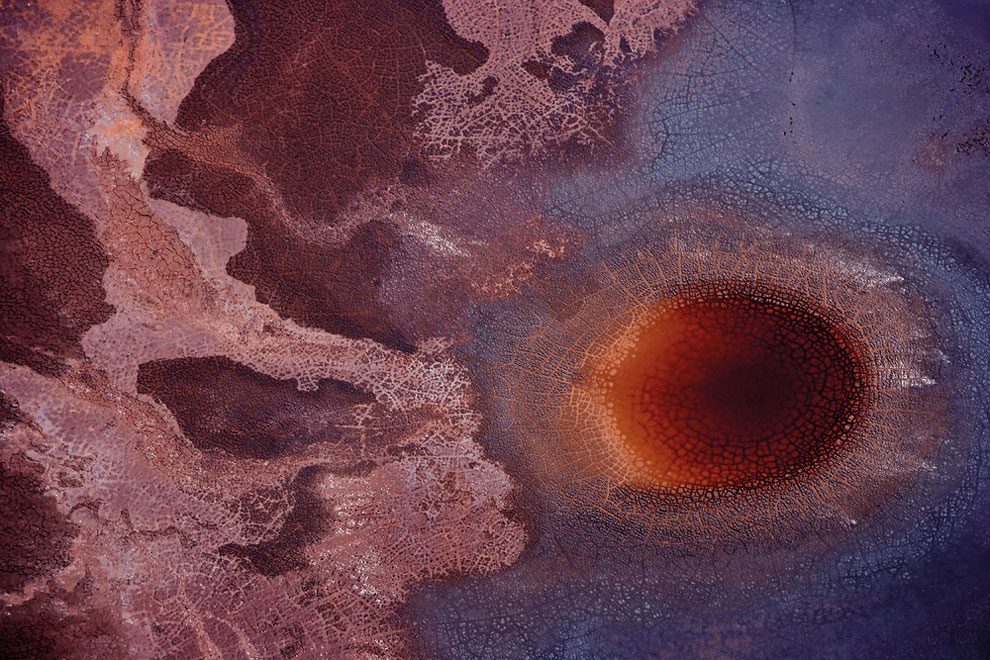 Gramercy, Louisiana, US. Red mud waste material is pumped on to the upper surface of a massive waste impoundment in a water slurry. The impoundments are essentially very large shallow bowls, engineered to de-water the slurry through evaporation and an internal drainage system fed by an arrangement of funnel-like decant points where water collects in pools. (Photo by J. Henry Fair/Industrial Scars/Papadakis Publisher) 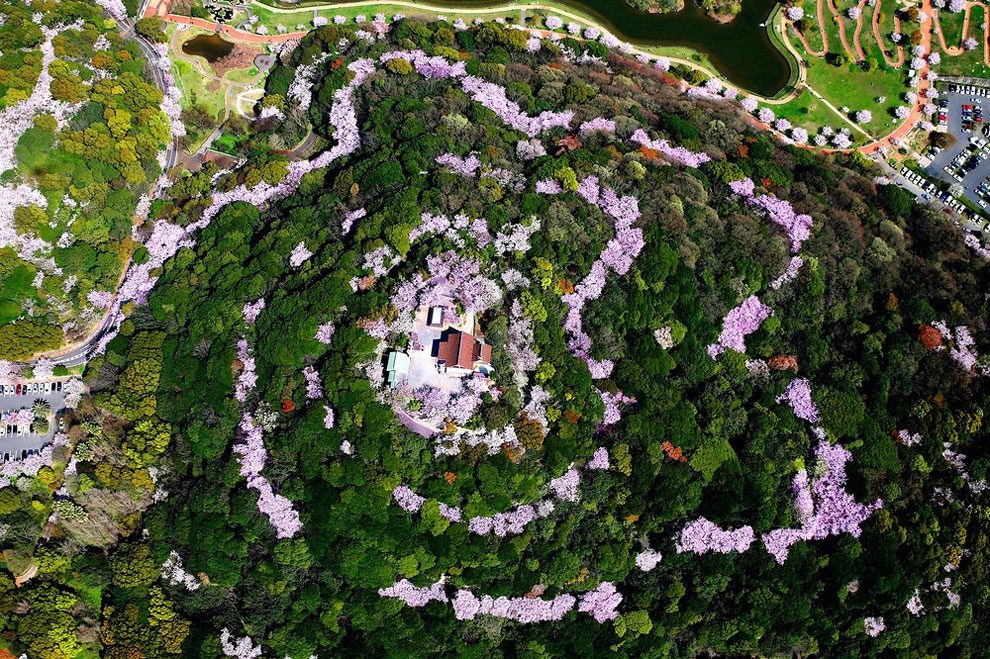 In this aerial image, fully bloomed cherry blossoms form a spiral at Konpira san in the Chuo Park in Kitakyushu, Fukuoka, Japan. (Photo by 2014 The Asahi Shimbun)

Romanian Artist Colorized Black And White Photos To Bring Memories To Vivid Reality
"The German Hair Force": Portraits Of German Soldiers With Long Hair In 1970s
Wildlife Photographer Of The Year 2015: First Glimpse Of Finalists' Images
"A Journey Guided By The Elements:" Surrealistic Reality In Photographs By Benjamin Everett
"The Genesis Of Design": Check Out This Amazing Display Of Carpets In Caverns
Something Unique: The Superb Humorous, Creative And Advertising Photo Works Of Frank Uyttenhove
100 Cameras Were Given To The Homeless And This Is What They Photographed
Underwater Photographer Jordi Benitez Castells Captures Jellyfish Off Spanish Coast
NYC Taxi Drivers 2014 Beefcake Calendar
Tokyo Bloggers Gallery
Amelia And The Animals By Robin Schwartz
The Adventures Moody Groot: A LEGO Photo Series
Israeli Photographer Captured Hundreds Of People... Wearing A Tiger Suit!
That Time When Nirvana Dressed Up In Woman Clothes For Mademoiselle Magazine In 1993
Christine Osinski’s Photographs Of Staten Island’s Overlooked New Yorkers In 1980s
I Fought The Law: Photographs By Olivia Locher Of The Strangest Laws From Each Of The 50 States
Japan, One Year After the March 11 Tsunami: A Revisit
One-month-old White Lion
Photographer Tom Hegen Raises Awareness On The Climate Issues Through Several Impressive Aerial Photographs
Every Spring This Forest In Belgium Becomes A Blue Wonderland
"Orcs Of New York" Is The Brilliant Facebook Parody You Need To Be Following
70's Style And Soul: Amazing Candid Photographs Taken In Soul Clubs In Memphis And New York, 1973
The Lost Golden Age: Soviet Russia, As Seen By Photographer Vladimir Sokolaev
Amazing Rare Photographs of The Romanovs’ Final Ball In Color, St Petersburg, Russia 1903
American Artist Captured Stunning Monochromatic Photos Of Tokyo Cityscapes At Night
Photographer Captures Couples Who Switch Outfits, and the Results Are Hilarious
Photo of the Day: A Smiling Sunflower
Breathtaking Ballet Photography By Nisian Hughes
Shortlist Photographs Of The 2020 Bird Photographer Of The Year Competition
Photo of the Day: The Annual Muscle Beach Championship
above, breathtaking, earth, views