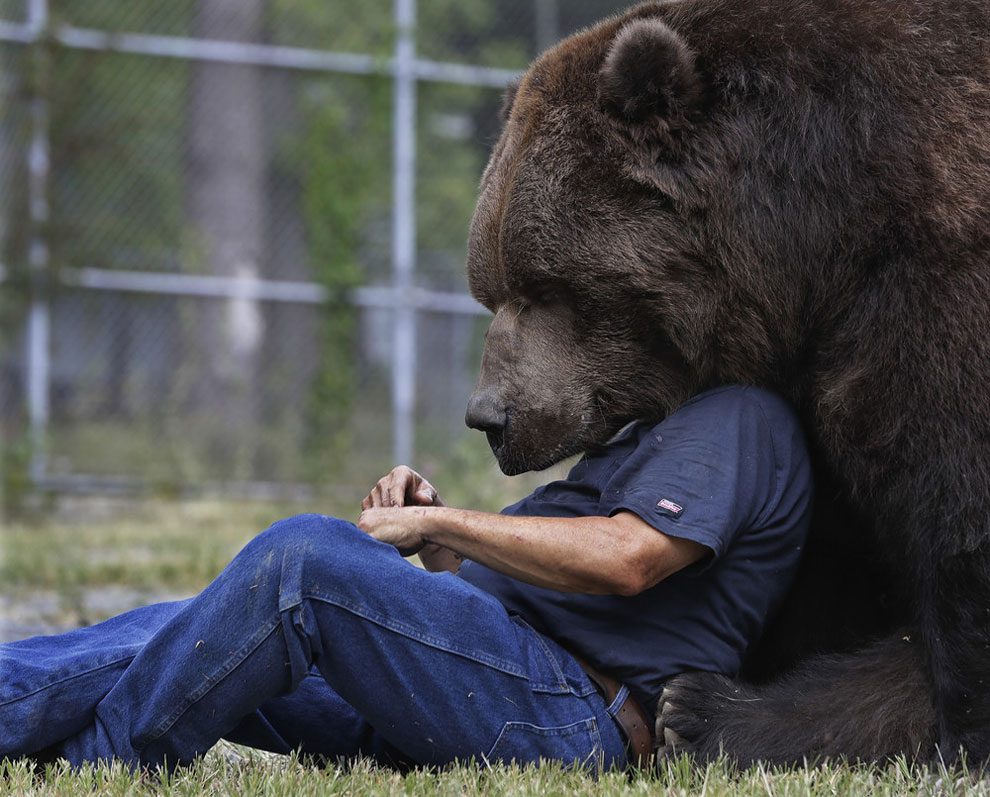 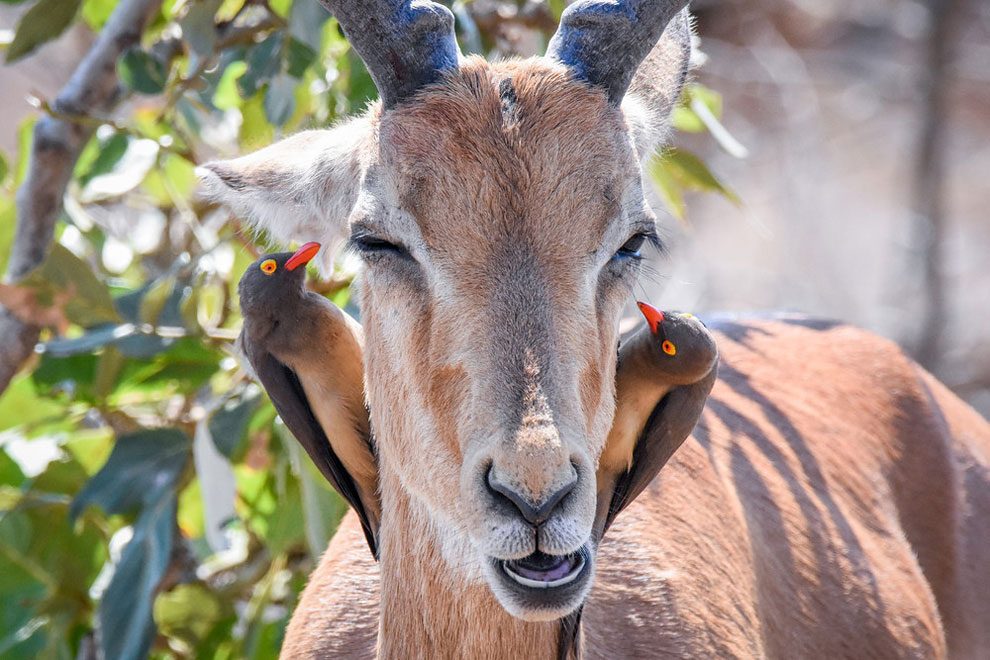 An impala appears to be listening to two oxpeckers as it browses on August 20, 2016 in the Kruger National Park, South Africa. Oxpeckers have a mutually beneficial relationship with most of the large mammals in the park by eating parasites from their skins, but a lesser known fact is that they also eat earwax to aid in the bird’s digestion. (Photo by Greatstock/Barcroft Images) 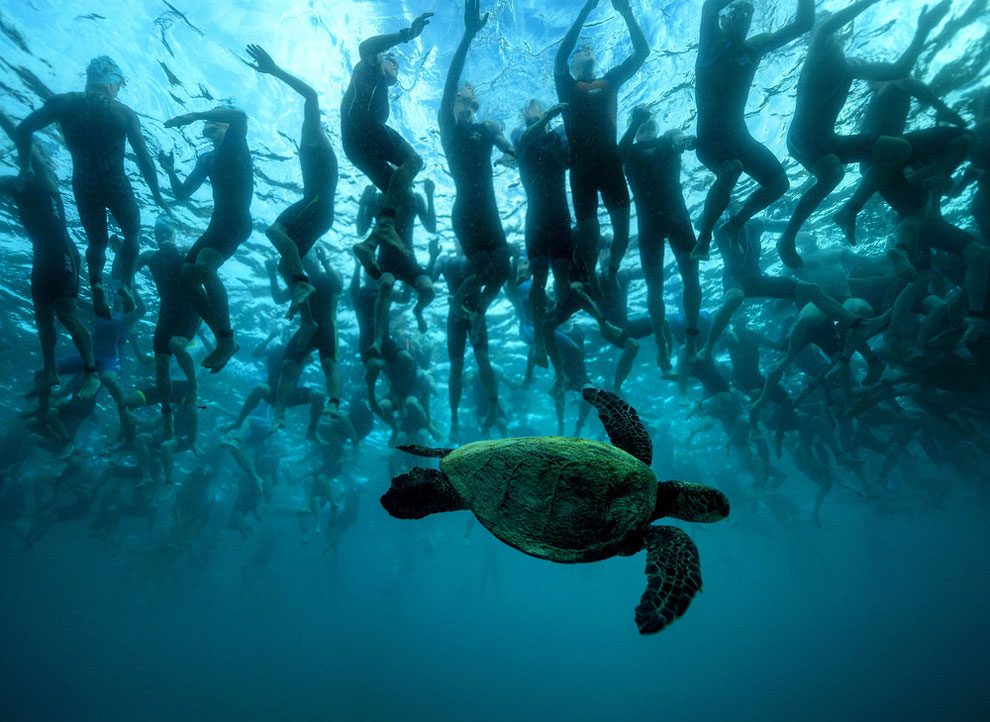 In this handout photo provided by IRONMAN, the green sea turtle, also known as “Honu”, is a symbol of good luck and longevity in Hawaiian lore. This native friend provides a little mystique to the 2,300 athletes who await the start signal of a 140.6-mile journey at the 2016 IRONMAN World Championship triathlon on October 8, 2016 in Kailua Kona, Hawaii. (Photo by Donald Miralle/IRONMAN via Getty Images) 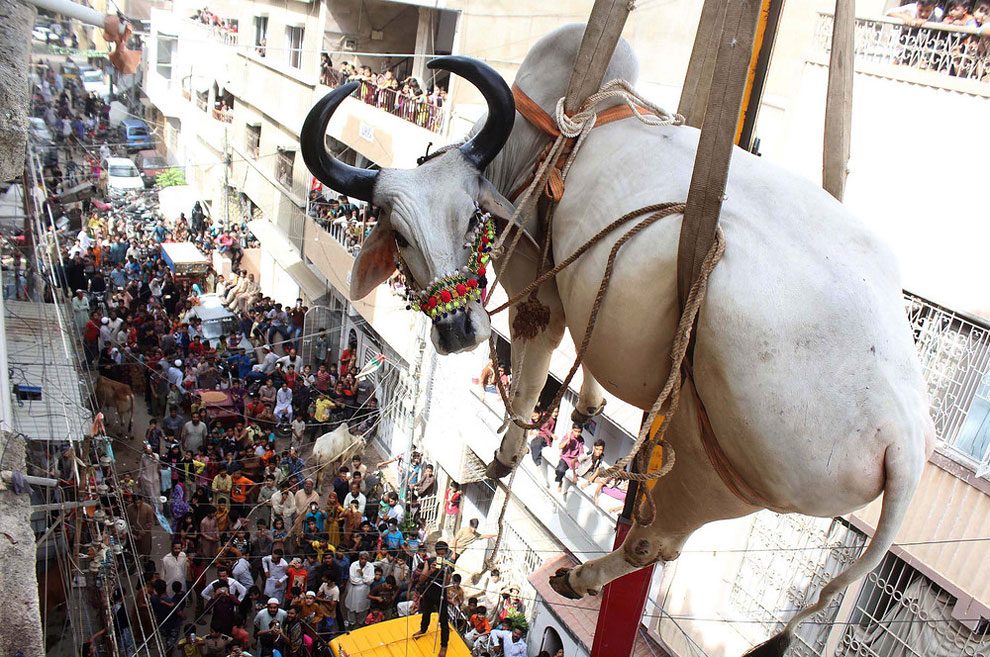 A Pakistani breeder use crane to carry his animals down from the roof for transporting them to the livestock market for the Muslim’s Eid al-Adha in Karachi, Pakistan on September 05, 2016. Due to the crowded population, agricultural land scarcity and irregular urbanization in Karachi, people sometimes keep their animals on their roofs. (Photo by Sabir Mazhar/Anadolu Agency/Getty Images) 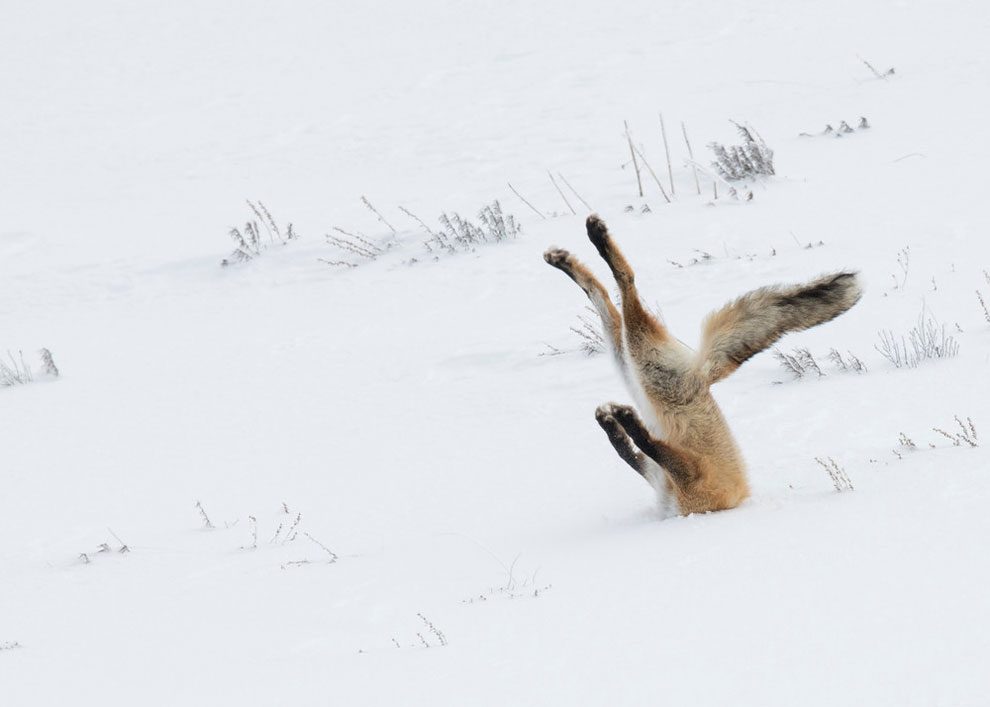 A fox face-plants in the snow in Yellowstone national park, Wyoming, USA, December 2015. Angela Bohlke’s image was the overall winner of the 2016 Comedy Wildlife Photography awards and the “On the land” category winner. (Photo by Angela Bohlke/Barcroft Images) 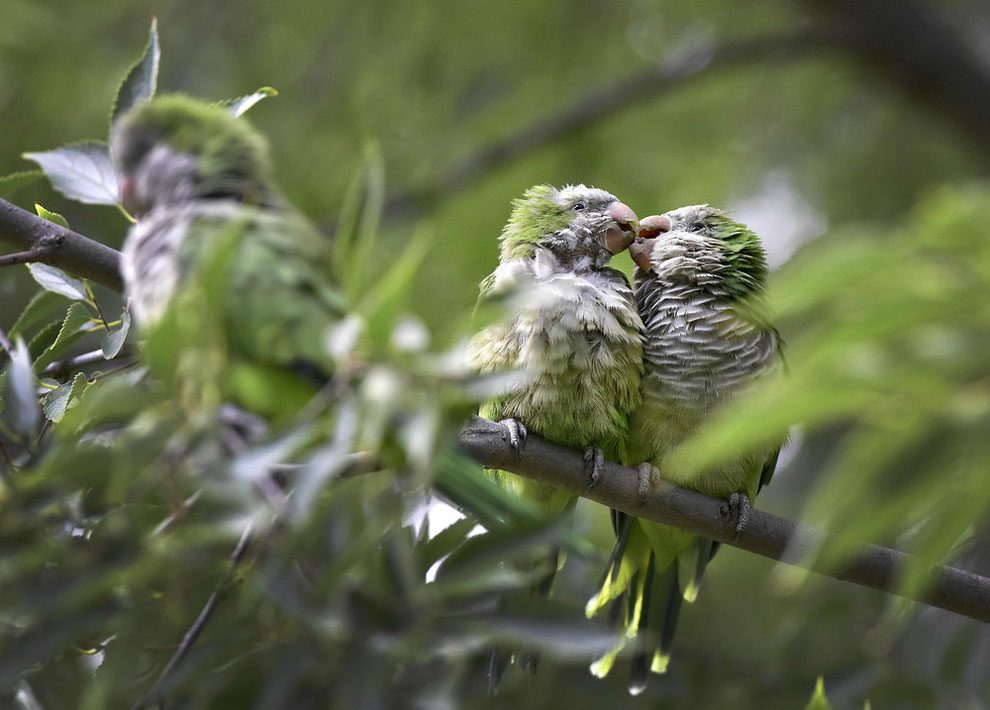 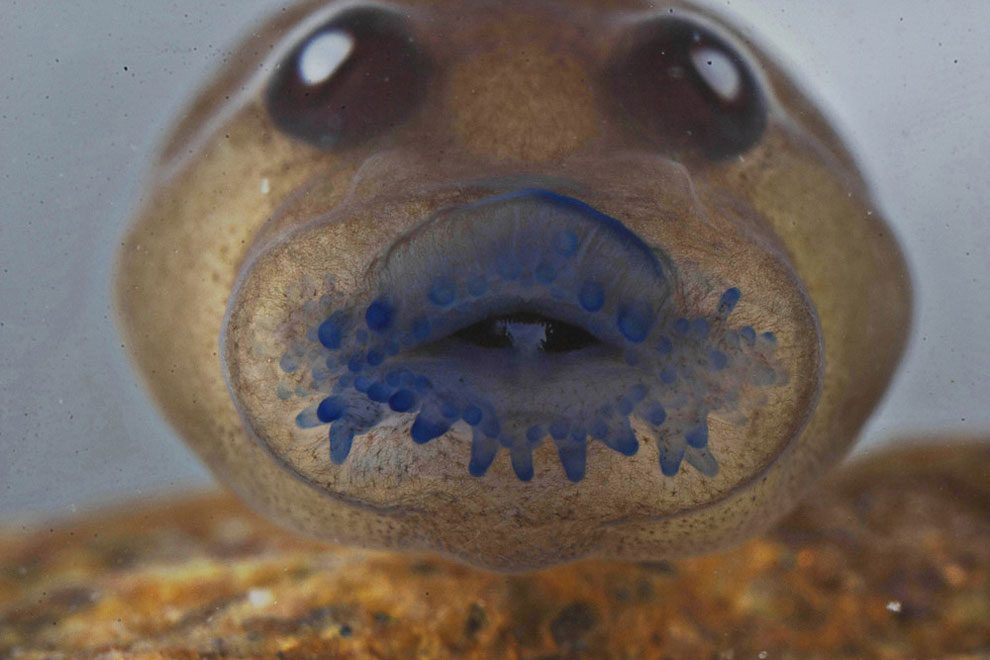 A tadpole of a frog, Frankixalus jerdonii, belonging to a newly found genus of frogs, seen under a microscope in Systematics Lab at the University of Delhi, Department of Environmental Studies, in New Delhi on January 14, 2016. Scientists have discovered the new genus of tree frogs in India thought to have been extinct for over a century. (Photo by S.D. Biju/AP Photo) 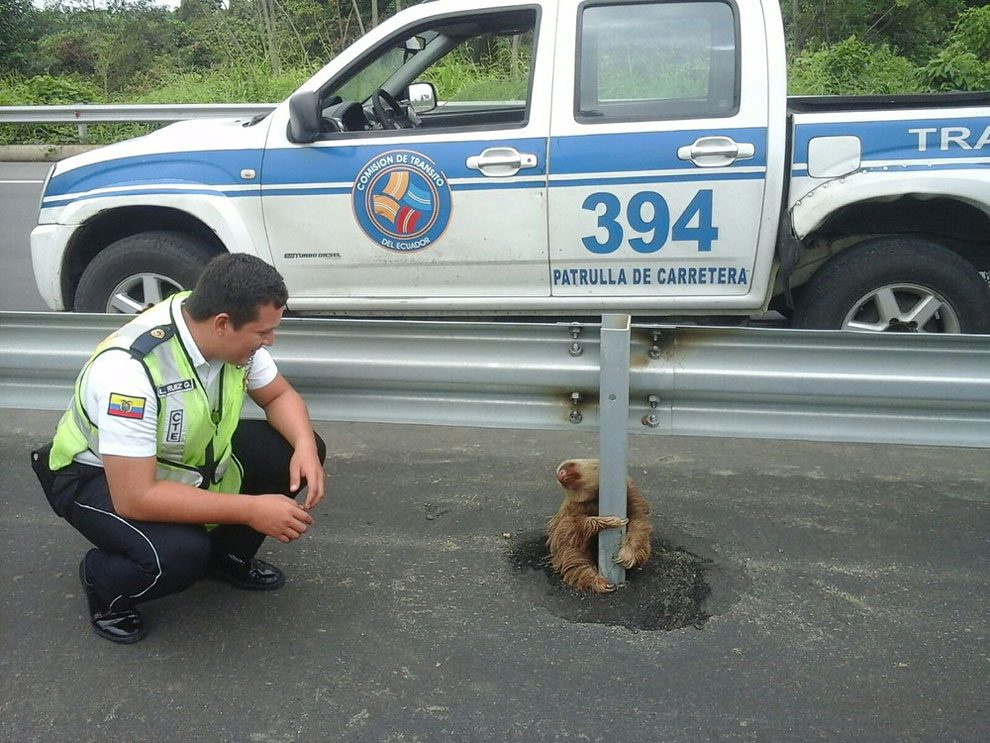 A sloth holds on to the post of a traffic barrier on a highway, in this handout photo provided by Ecuador’s Transit Commission, in Quevedo, Ecuador. Transit police officers, who were patrolling the new highway found the sloth after it had apparently tried to cross the street and returned the animal to its natural habitat after a veterinarian found it to be in perfect condition, according to a press release. (Photo by Reuters/Ecuador’s Transit Commission) 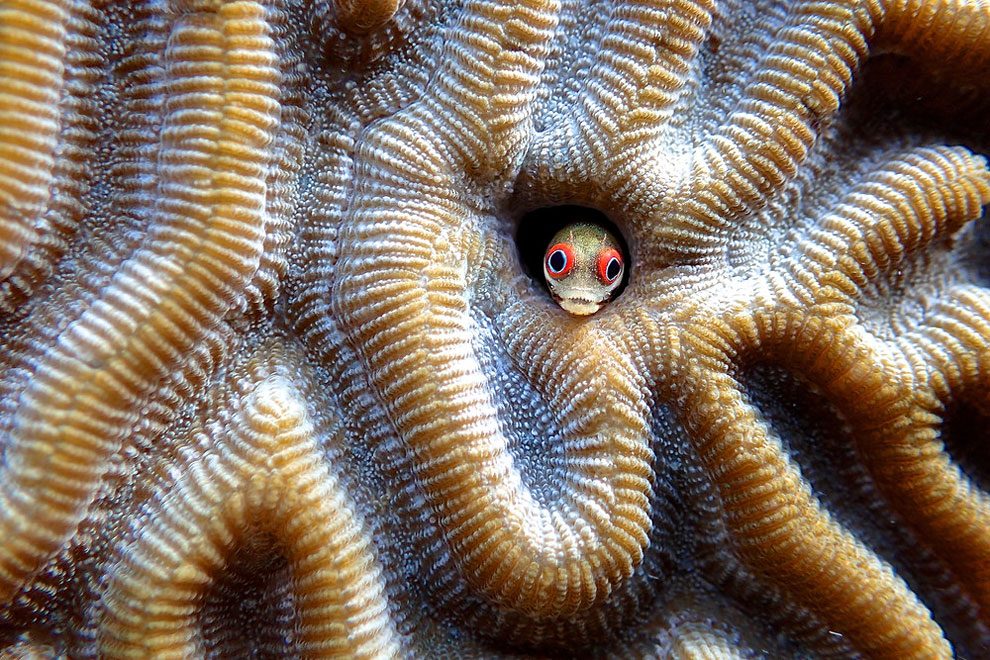 A small sea creature pops it’s head out to say hello taken on January 14, 2016. Jonathan Jagot, 17, has been sailing round the world with his parents since he was 12. The young adventurer was named BBC Young Wildlife Photographer of the Year. (Photo by Jonathan Jagot/Barcroft Media) 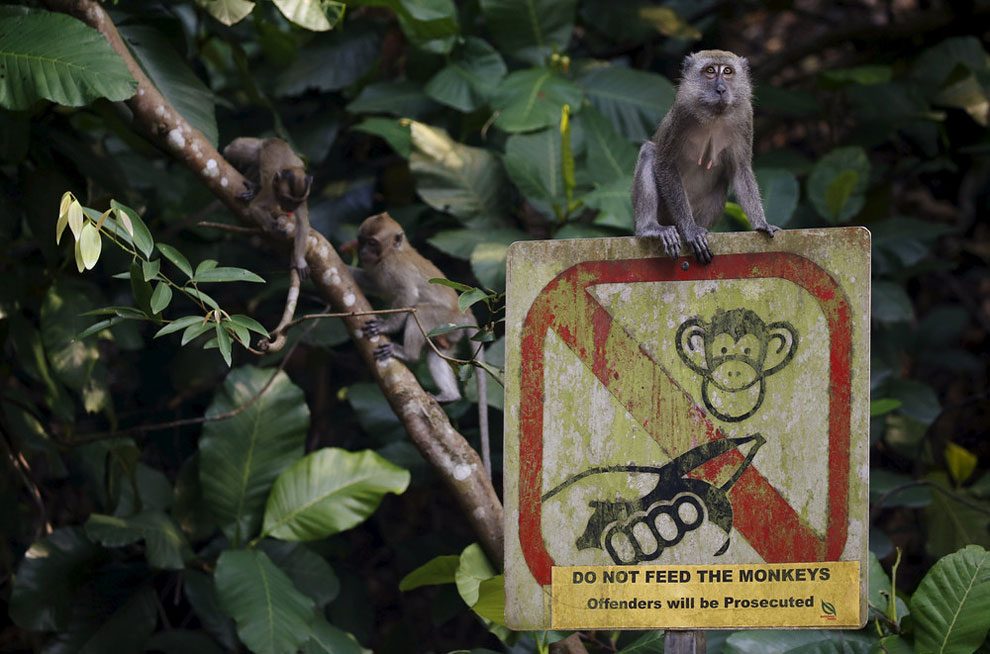 A monkeys sits on a sign asking visitors not to feed monkeys at the entrance to the MacRitchie Nature Reserve in Singapore on March 25, 2016. (Photo by Edgar Su/Reuters) 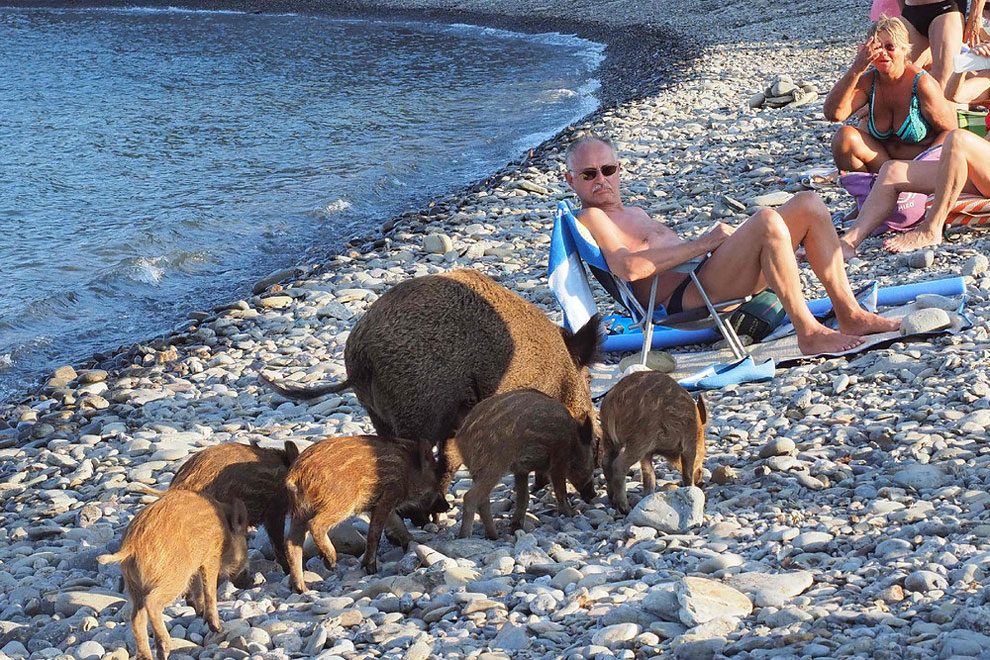 A wild boar and her piglets arrive on a beach to cool off in sea water whilst people sunbath on September 12, 2016 in Cerbere, southwestern France. (Photo by Raymond Roig/AFP Photo) 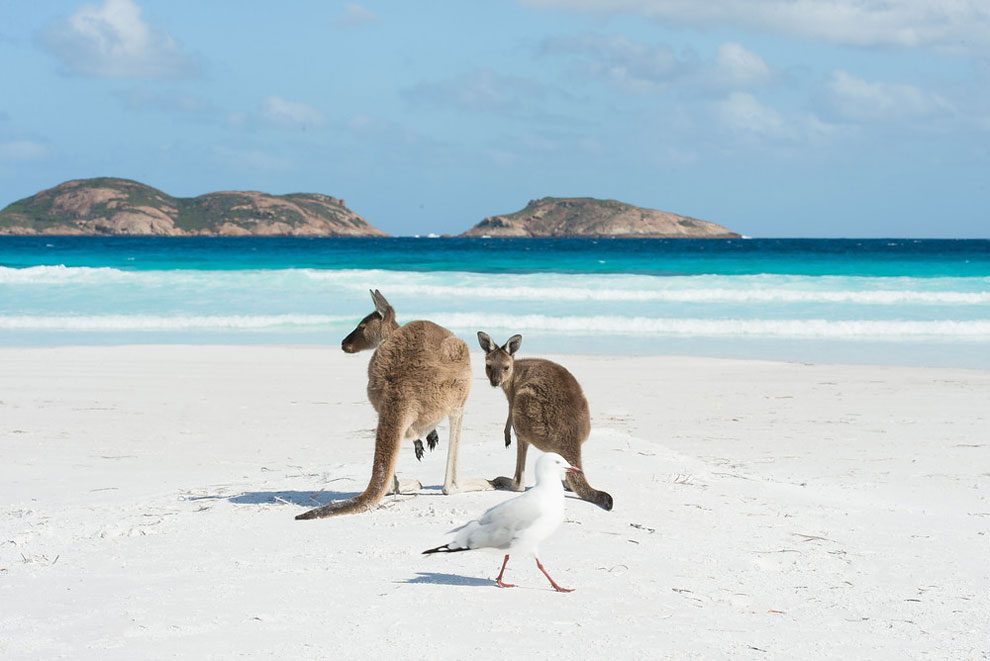 Kangaroos enjoy the pristine white sand of Lucky Bay, Esperance, Australia on February 16, 2016. Lucky Bay, named by the department of soils and terrain as Australia’s “whitest beach”, is set against a stunning seascape of 110 islands of the Recherche Archipelago. (Photo by James D. Morgan/Rex Features/Shutterstock) 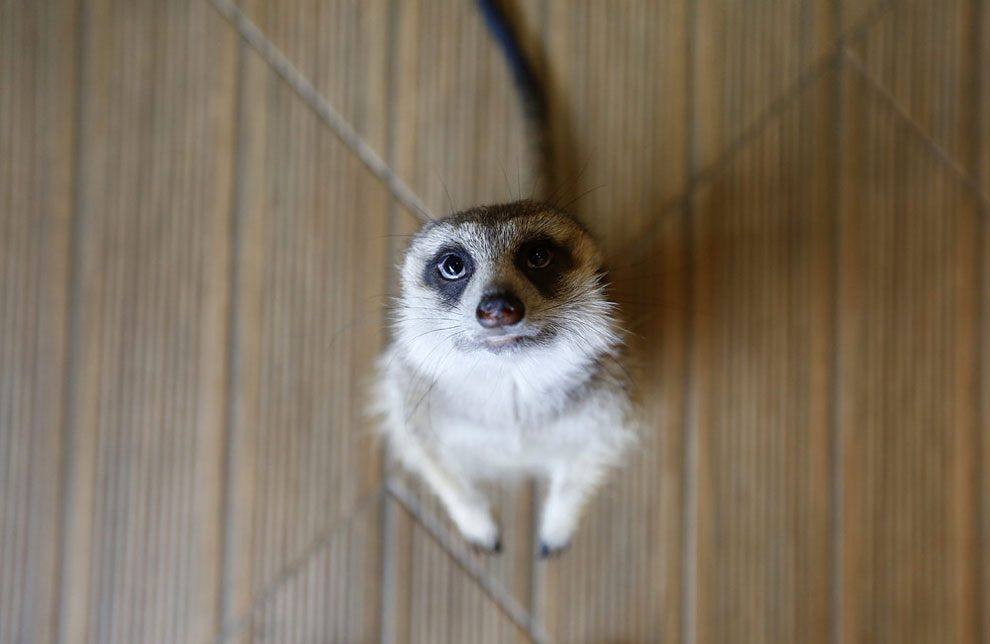 A picture made available on 07 March 2016 of a Meerkat in the petting room at the Little Zoo Cafe, a business built to capitalize on Thais’ love for exotic animals, and food, on the outskirts of Bangkok, Thailand, 05 March 2016. The cafe boasts Fennec foxes, Meerkat, native to parts of Africa, Silver Fox, Raccoon and Chinchillas, along with a menu of Thai food and Cheesecake, among other sweet deserts. Nature is a faraway fantasy in the bustling exhaust-filled cement city of Bangkok, fuelling a demand to own and be close to exotic pets. The trend to be near to a species that was once wild, in a city environment, far from the natural setting, has drawn criticism but continues to grow. (Photo by Barbara Walton/EPA) 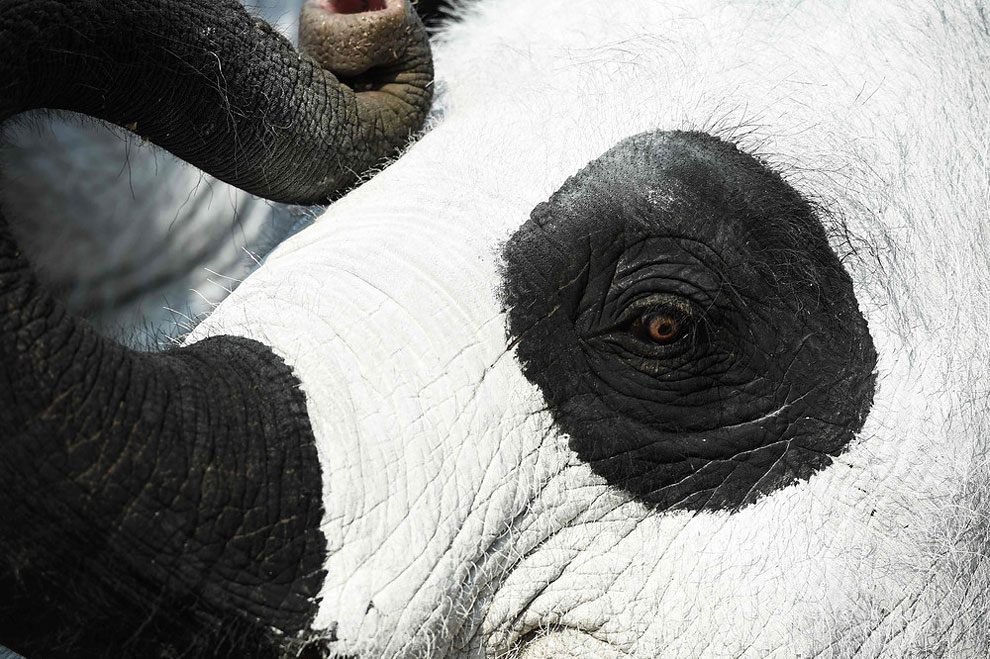 An elephant painted like a panda poses for pictures at The Golden Mount in Ayutthaya, Thailand on March 16, 2016. The event, consisting of placing 1,600 papier- mache pandas in various cities around the world in collaboration with the WWF, is aimed at raising awareness of the endangered species. (Photo by Lillian Suwanrumpha/AFP Photo) 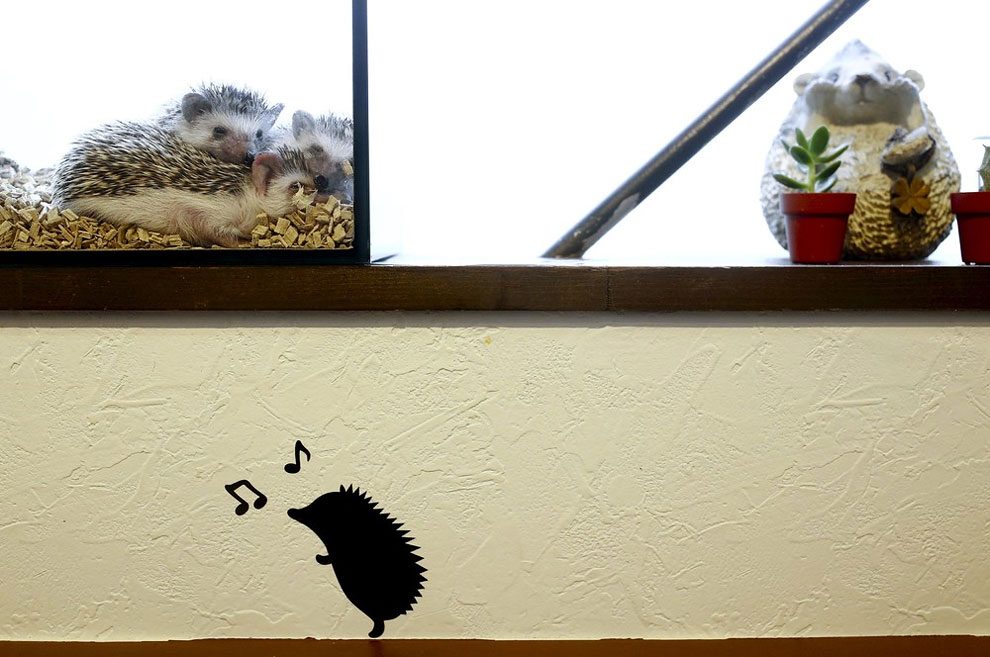 Hedgehogs sit in a glass enclosure at the Harry hedgehog cafe in Tokyo, Japan, April 5, 2016. In a new animal-themed cafe, 20 to 30 hedgehogs of different breeds scrabble and snooze in glass tanks in Tokyo’s Roppongi entertainment district. A fee of 1,000 yen ($9) on weekdays and 1,300 yen on holidays brings an hour of playing with and cuddling – carefully – the prickly mammals, which have long been sold in Japan as pets despite not being native to the island nation. Staffer Mizuki Murata, who also works in a rabbit cafe in the same building, said the shop had been popular since its February opening, with customers often having to queue. The cafe’s name Harry alludes to the Japanese word for hedgehog, harinezumi. (Photo by Thomas Peter/Reuters) 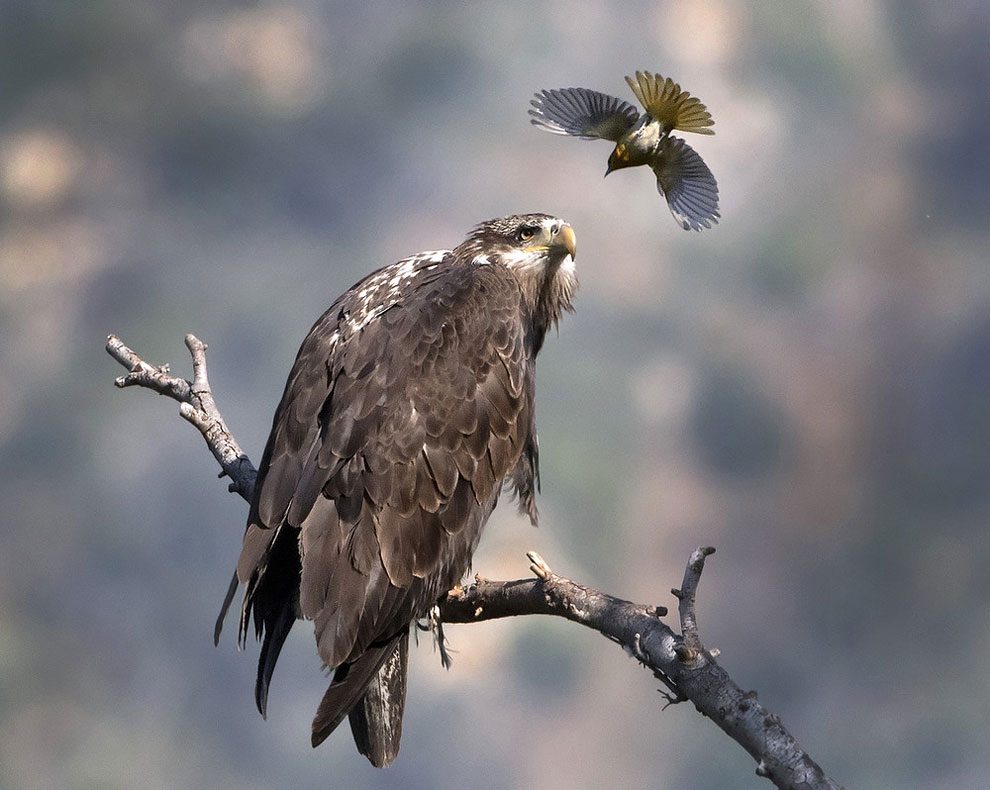 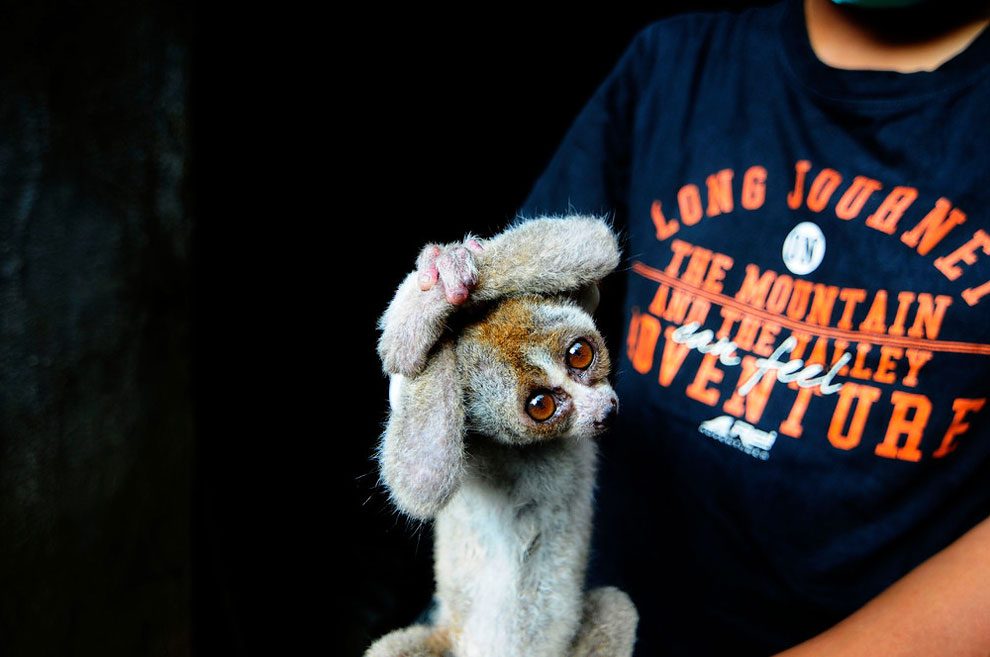 Medical team from International Animal Rescue (IAR) give medical treatment to a Javan slow loris animals which have been confiscated from individuals or markets which illegally sell them as pets, before being released at a rescue center in Ciamis on September 04, 2016 in West Java, Indonesia. The Javan slow loris is one of the world’s most endangered species. (Photo by Jefta Images/Barcroft Images) 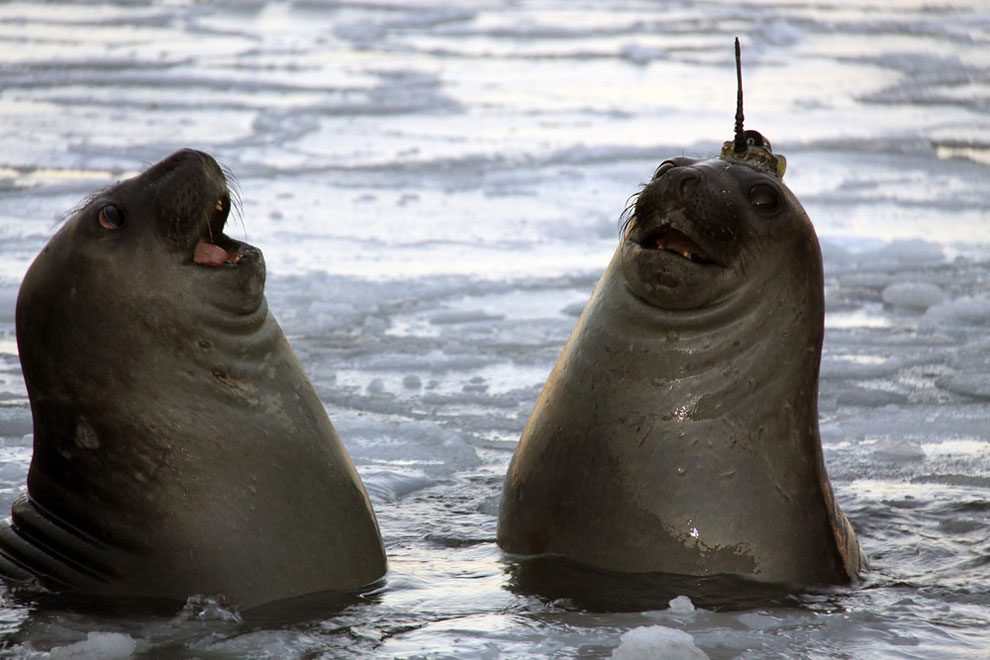 An elephant seal with a satellite tracking device on its head in Tasmania, Australia. Researchers in Hobart have tracked elephant seals in the Southern Ocean, revealing dive depths of almost 2.4km and a slight increase in the number of the species since 2005. (Photo by Clive McMahon/EPA/Imas) 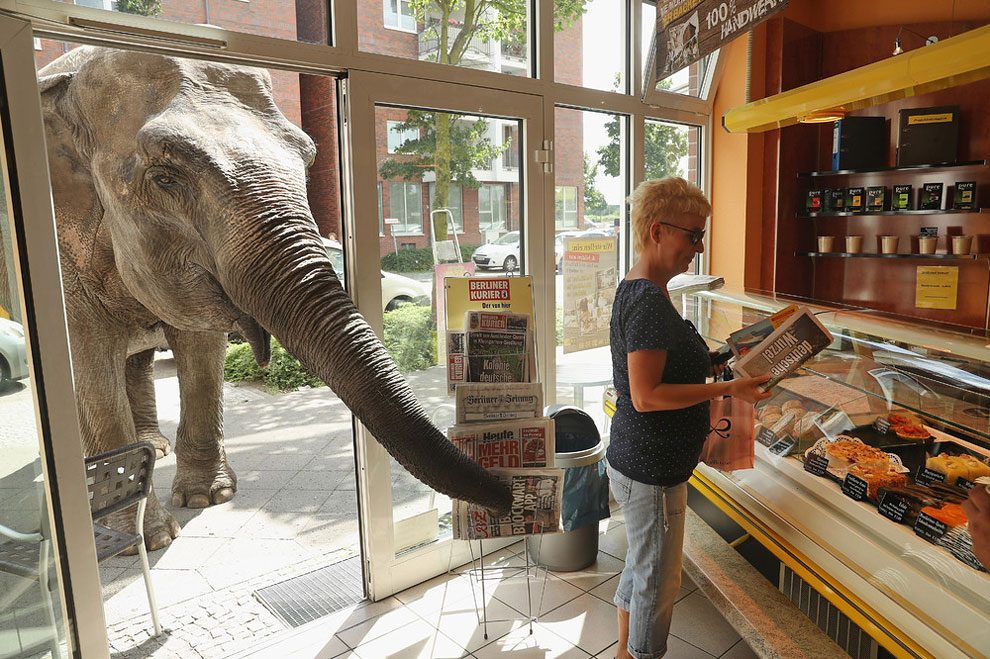 Maja, a 40-year-old elephant, extends her trunk into a bakery as a customer buys a newspaper while Maja took a stroll through the neighborhood with her minders from a nearby circus on July 1, 2016 in Berlin, Germany. (Photo by Sean Gallup/Getty Images) 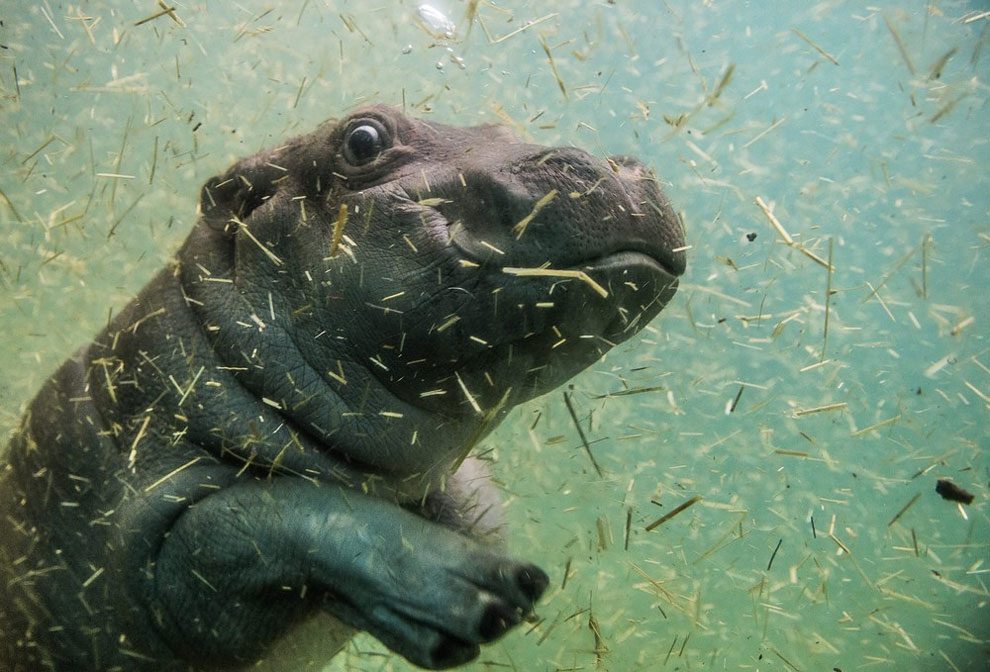 A one-month old baby hippo enjoys diving in the water pool at the hippopotamus enclosure of the zoo in Prague, Czech Republic, February 26, 2016. (Photo by Filip Singer/EPA) 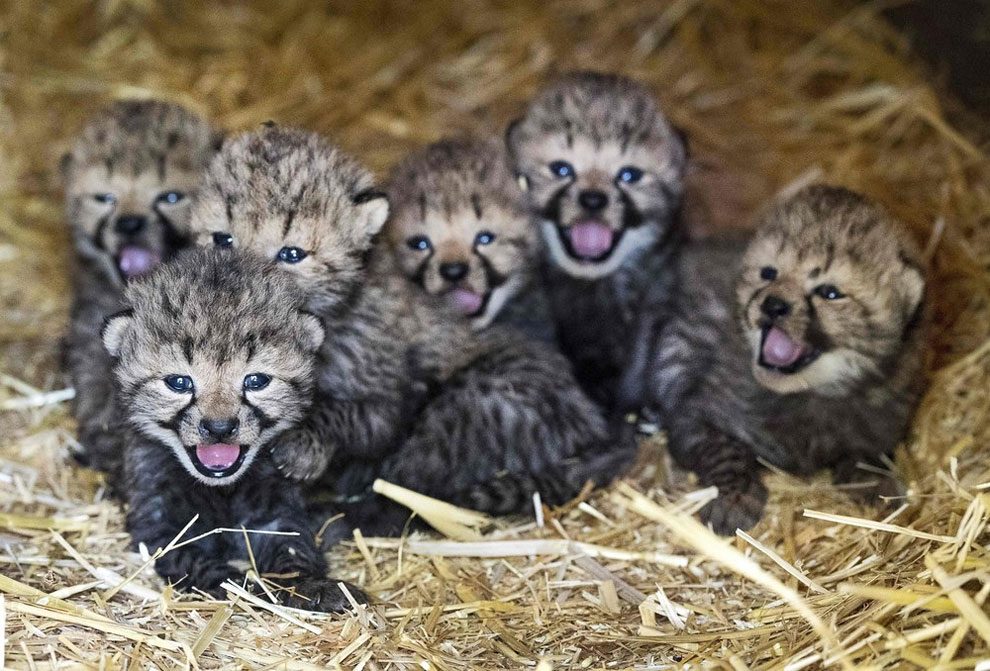 Six cheetah cubs in their enclosure at the Burgers Zoo in Arnhem, The Netherlands, on September 30, 2016. (Photo by Piroschka van de Wouw/Getty Images) 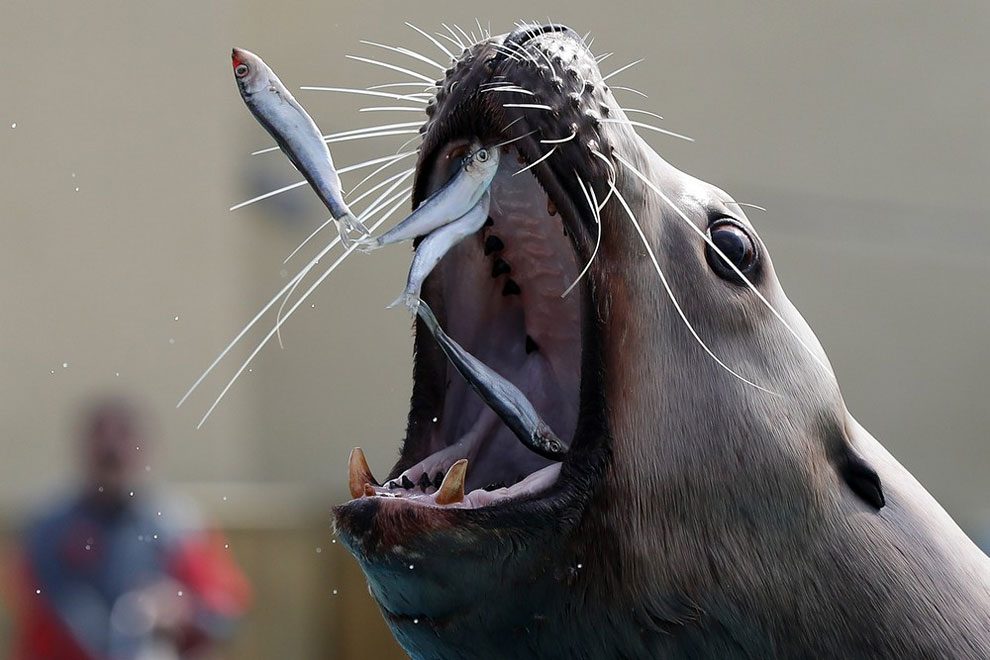 This Creative Hairdo Is All The Rage On The Farm
6-Month-Old Giant Panda Twins Debut At The Panda House Of Chongqing Zoo
Hilarious Memes Of Beluga Whale Who Upstaged A Bride By Photobombing Her On Her Big Day
Llion and Dachshund - Friends Forever
When Given Colored Construction Paper, Wasps Build Rainbow Colored Nests
Rest in Peace. 'World's Angriest Cat' Colonel Meow is Dead.
Grumpy Cat Not Happy to Be Named First Madame Tussauds Cat
"Cats In Hats"
Hero Cat, Tara, Throws Ceremonial First Pitch - Sort Of
You Can Get Tattoo Sleeves For Your Cat So They Can Look As Badass As They Feel
Flocks of Sheep Take over London's Savile Row
Scientists Are Painting Eyes On Cows’ Butts To Stop Lions Getting Shot
2020 Social Justice Kittens Calendar Is Here!
Super Fun Shark Bed for Your Pets
These Close-Ups Of Snails In A Rainstorm Are Beautiful
What Happens To The Environment When Humans Disappear? The Wildlife Inside The Chernobyl Nuclear Disaster Exclusion Zone
How Animals Chill in Summer Heat
This Woman Set Up A Photo Booth For Birds In Her Yard, And The Results Are Extraordinary
Humorous Instagram Account Doodles Adorable Tiny Pug Into Cute Characters
Photographer Captured His Border Collie Playing In The Water
Alpacas Attract Beijingers to World Cup
Tiger Shark: Close Up
Meet the Lykoi: An Odd New Breed of "Werewolf" Cats
Bird Feeder by Árpád Orosz
Human Builds A Dragon-Shaped Cardboard House For His Cat In Order To Please His Master
Weird Medieval Paintings Of Cats Licking Their Butts
Artist Paints Hyper Realistic Animal Portraits That Place Your Own Pet In Historical Settings
January 31 – February 6, 2015: Animals
Korean Woman Raises 200 Dogs Saved From Streets
Nature’s Quiet Assassin: Astonishing Pictures Capture Moment Jaguar has Caiman for Lunch
animal, photos