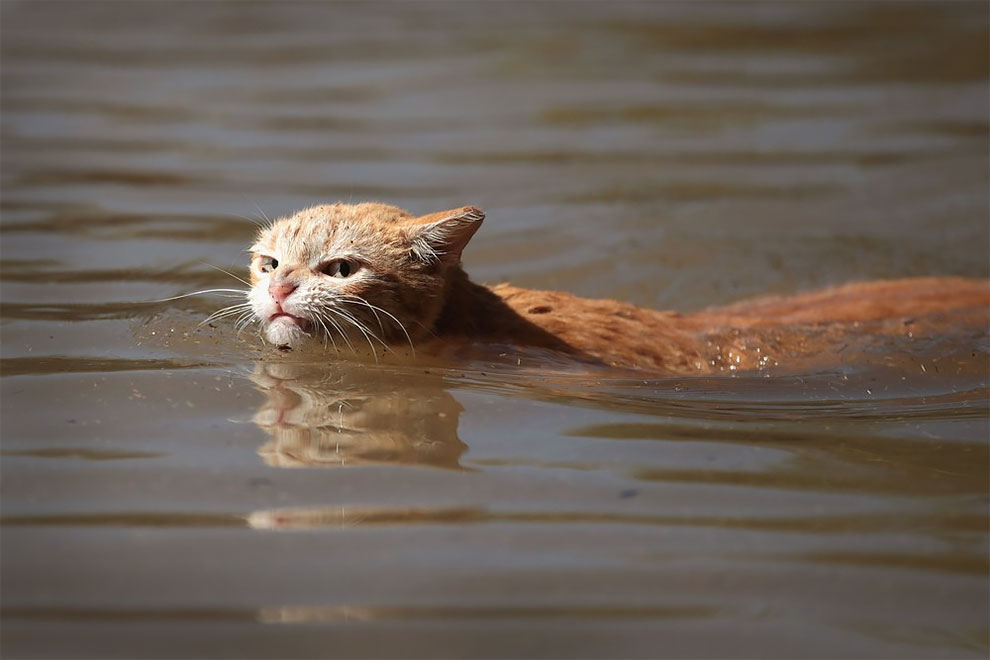 A cat tries to find dry ground around an apartment complex in Houston after Hurricane Harvey hit on Aug. 30. Harvey made landfall in South Texas on August 25, leading to days of downpours that dumped more than 50 inches of rain. Harvey damaged or destroyed about 200,000 homes as the storm system flooded much of Houston and smaller coastal communities. (Photo by Scott Olson/Getty Images) 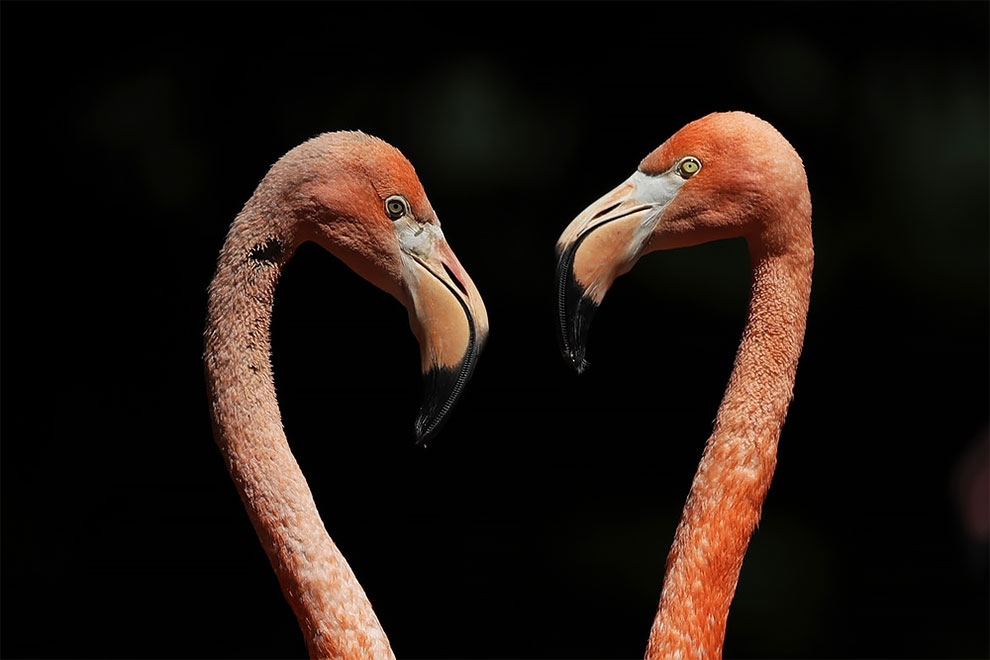 Flamingos stand in their enclosure at the zoo “Hellabrunn” in Munich, Germany, July 17, 2017. (Photo by Matthias Schrader/AP Photo) 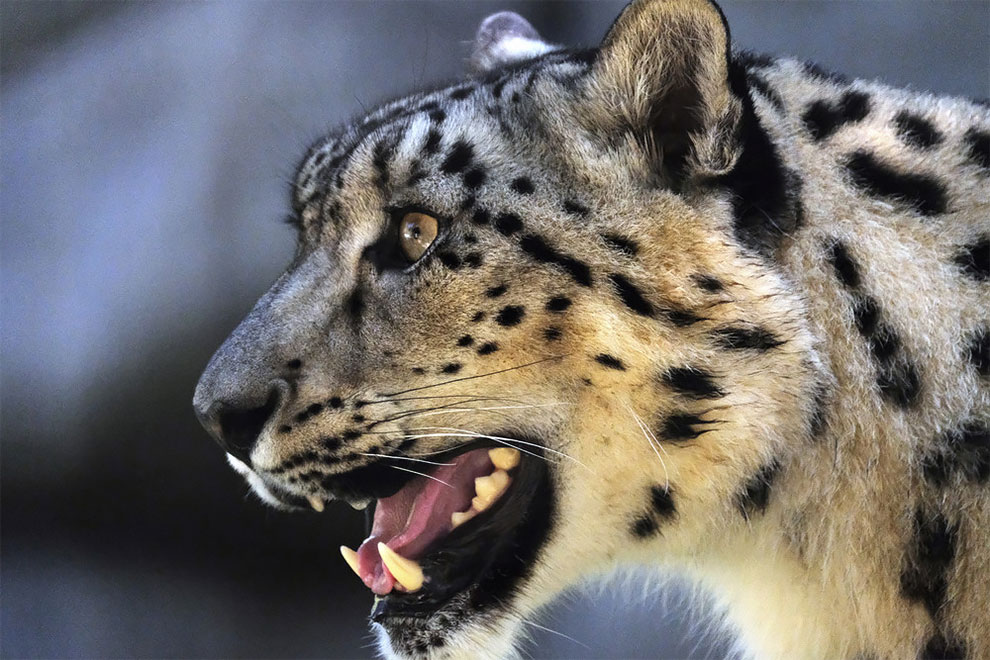 Georgina, an endangered snow leopard, watches as her new twin cubs play in their enclosure during their public debut at the Los Angeles Zoo, in California, September 12, 2017. The elusive snow leopard – long considered an endangered species – has been upgraded to “vulnerable”, international conservationists said Thursday. But experts warned the new classification does not mean the big cats are safe. (Photo by Richard Vogel/AP Photo) 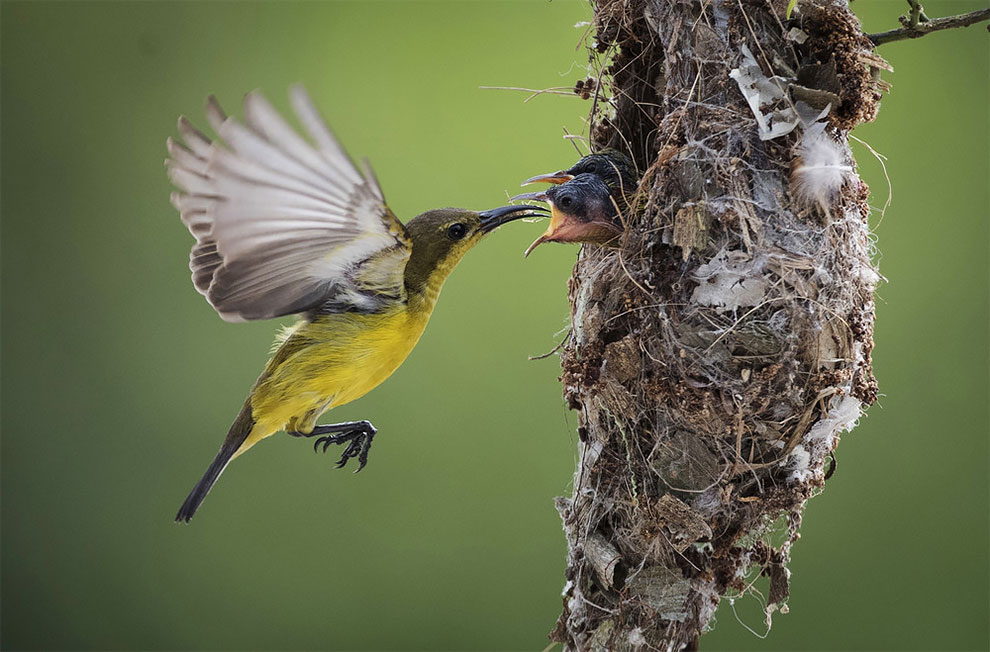 An Olive-backed Sunbird feeds an insect to its two chicks in their nest in Klang, Selangor, Malaysia, on January 21, 2017. The small birds feed largely on nectar, although they will also take insects, especially when feeding their young. Sunbirds are found in tropical Africa, India, and the forests of Southeast Asia, including the Philippines. (Photo by Vincent Thian/AP Photo) 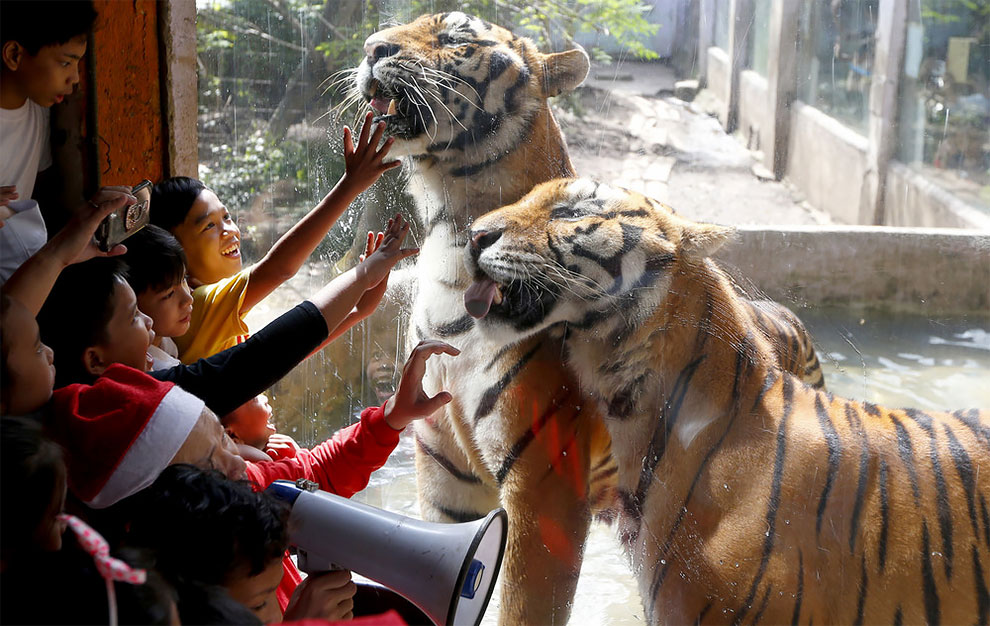 Orphans interact with Bengal tigers during a Christmas visit to the Malabon Zoo on December 21, 2017, in Malabon city, north of Manila, Philippines. Malabon Zoo founder Manny Tangco (holding a megaphone) hosted the “Merry Animal Christmas” to some 200 orphans inside the compound to underscore that “Christmas is for animals too”. (Photo by Bullit Marquez/AP Photo) 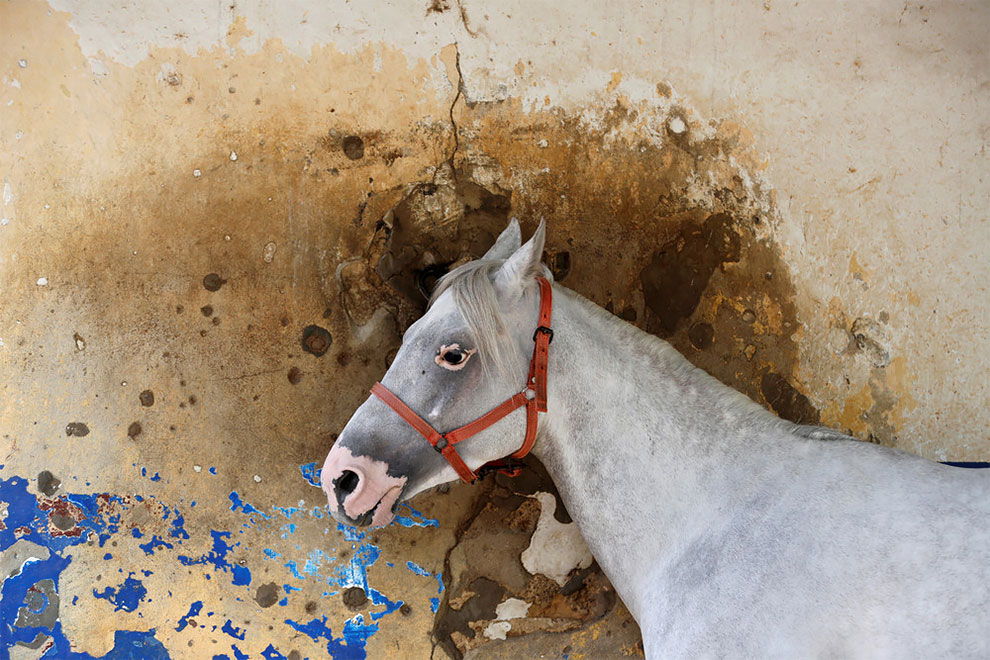 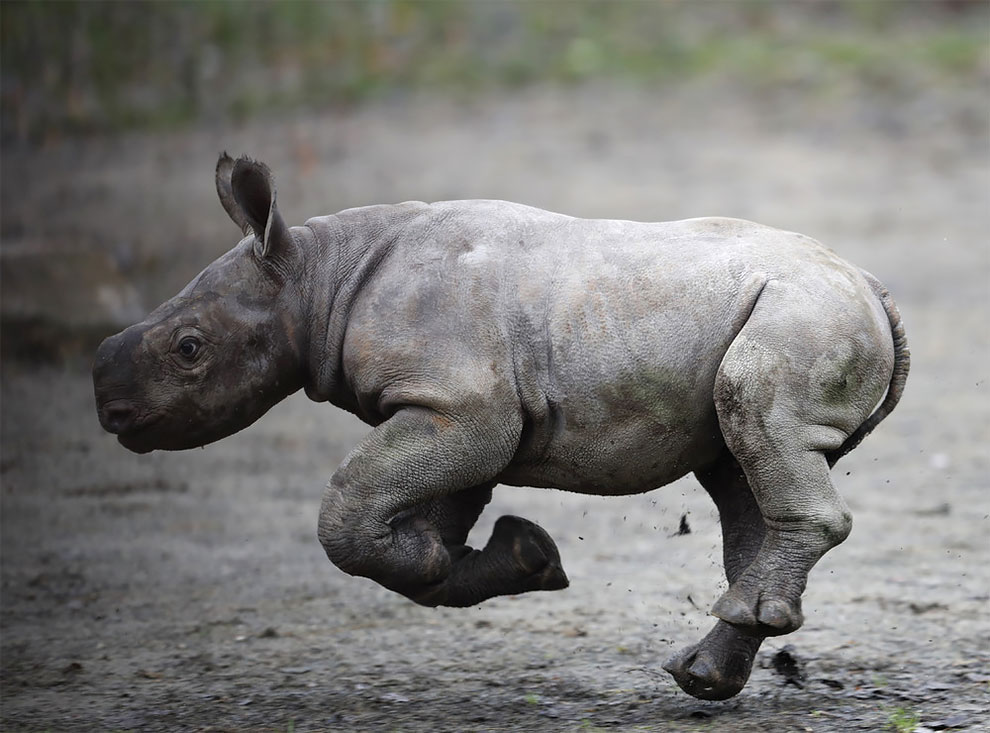 A newly born eastern black rhino runs in its enclosure at the zoo in Dvur Kralove, Czech Republic, October 25, 2017. An eastern black rhinoceros born in a Czech zoo is a small but important step in efforts to save the subspecies of the black rhinoceros from extinction. There’re only last few hundreds remaining in African reserves, where they must be protected from poachers. The calf born on Oct 2 in the Dvur Kralove zoo is in good shape. (Photo by Petr David Josek/AP Photo) 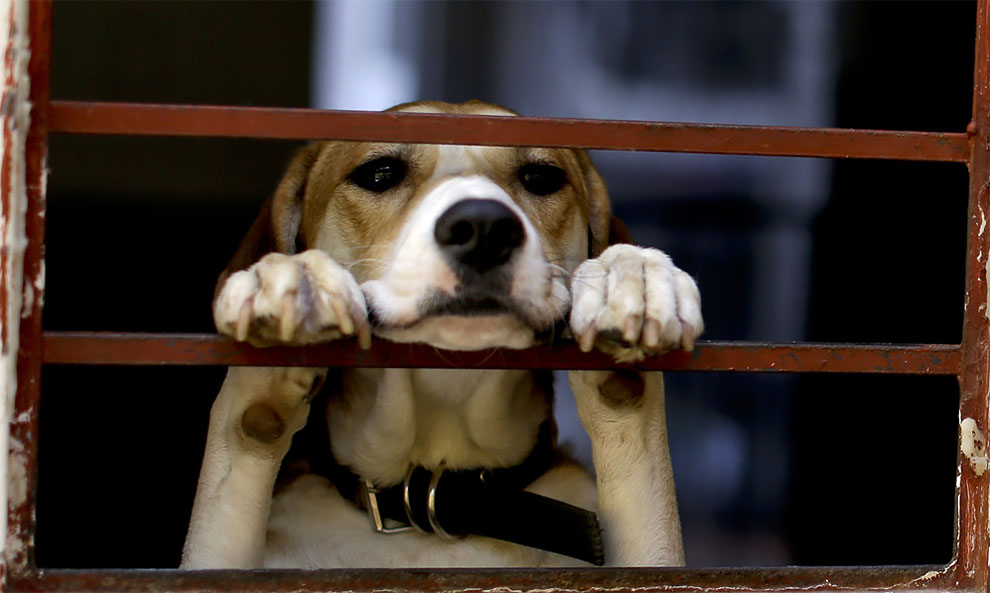 A dog found wandering the streets in the aftermath of a 7.1-magnitude earthquake, stands on his hind legs, looking out from “La Casa del Mestizo” animal shelter, in Mexico City, September 22, 2017. Rescuers have found some animals skittishly wandering the streets and taken them to shelters. They know they are someone’s pet because they are clean, sociable and appear well cared for. (Photo by Natacha Pisarenko/AP Photo) 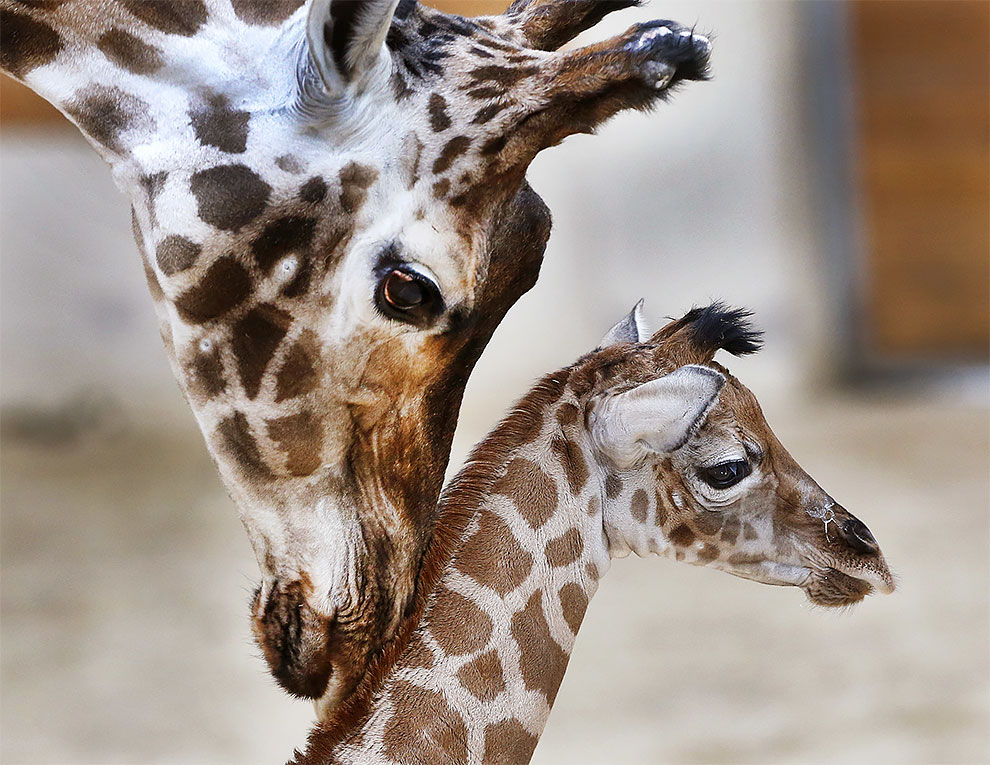 Three-days-old giraffe baby Kimara is touched by its mother Katharina during its first way out in the Opel zoo in Kronberg near Frankfurt, Germany, January 3, 2017. (Photo by Michael Probst/AP Photo) 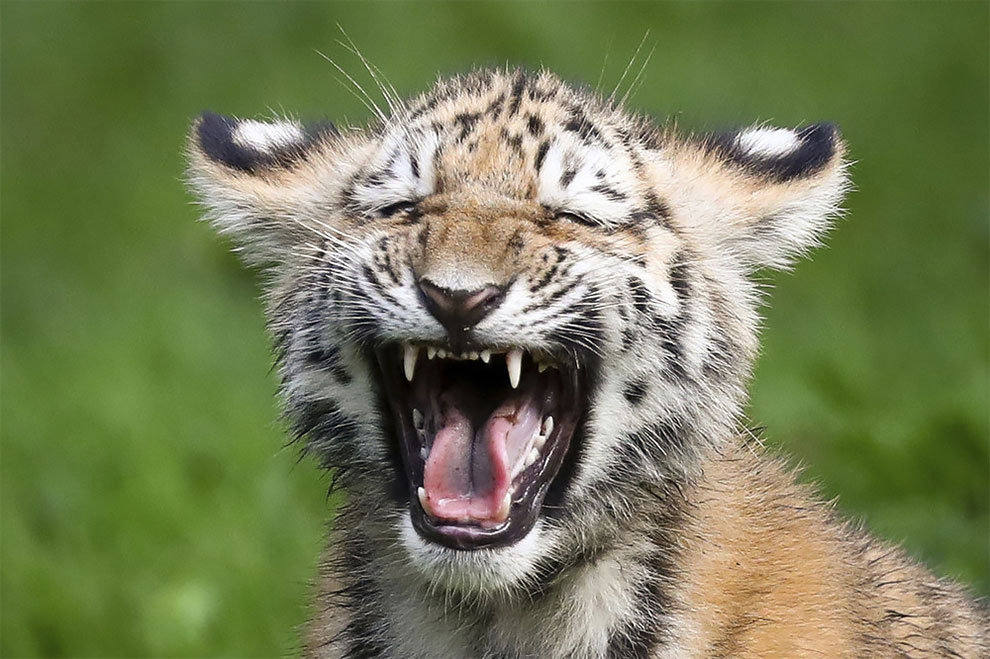 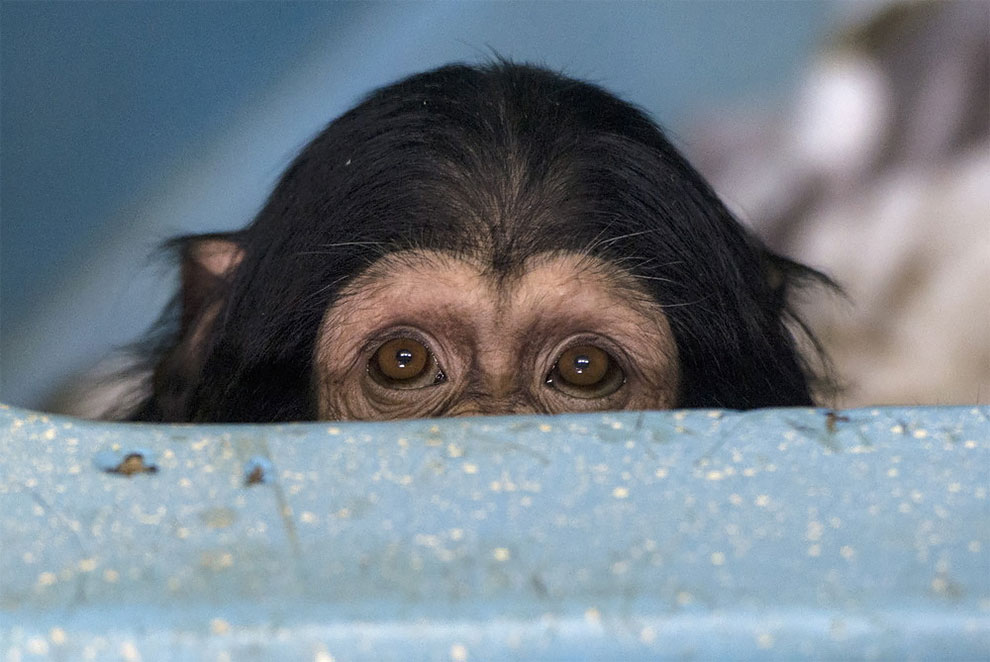 One of the two chimpanzee babies seized from a smuggler looks on as they both have been handed over by customs officials to the Novosibirsk Zoo on February 2, 2017. (Photo by Kirill Kukhmar/TASS via Getty Images) 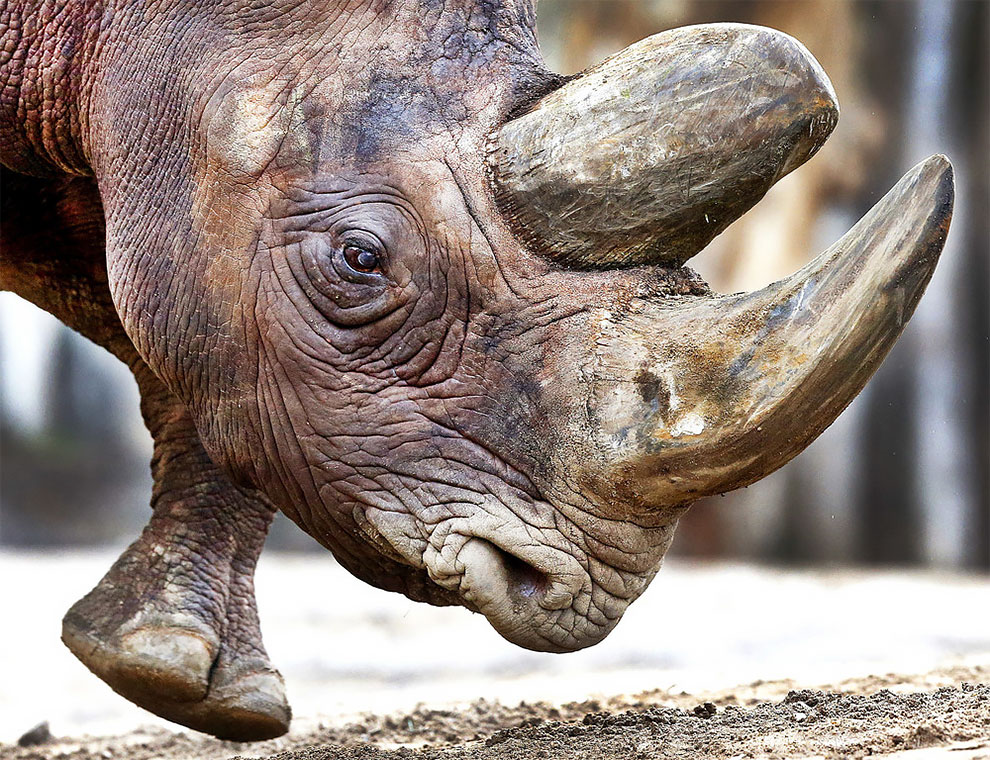 Black rhinoceros Kalusho that was born 30 years ago in Zimbabwe walks in its enclosure in the zoo in Frankfurt, Germany, February 3, 2017. Kalusho came to Frankfurt when it was three years old. (Photo by Michael Probst/AP Photo) 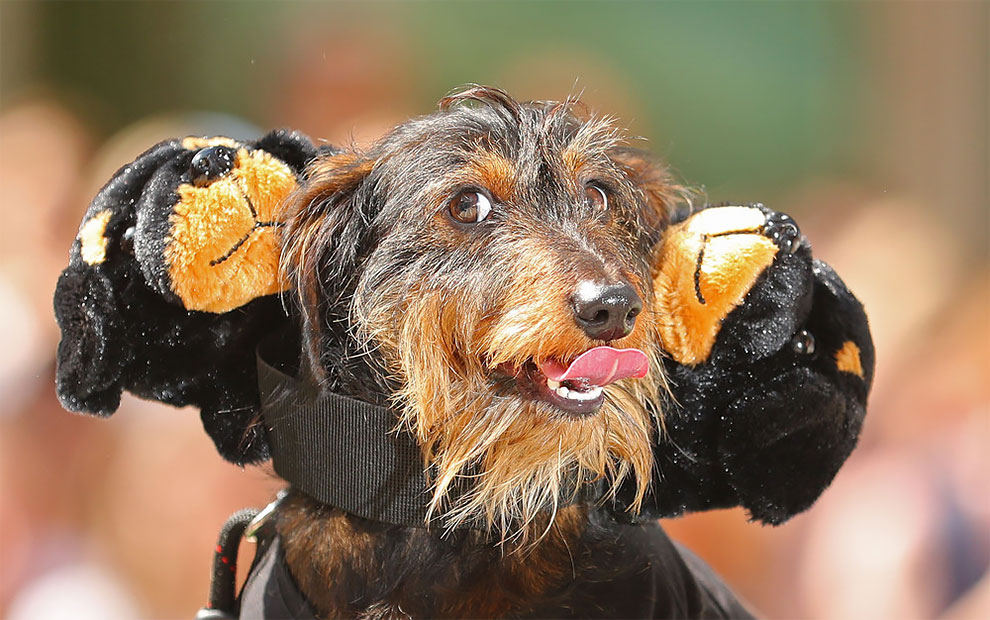 A dachshund with three heads competes in The Best Dressed Dachshund Costume Competition during the annual Teckelrennen Hophaus Dachshund Race on September 23, 2017 in Melbourne, Australia. The annual “running of the Wieners” is held to celebrate Oktoberfest. (Photo by Scott Barbour/Getty Images) 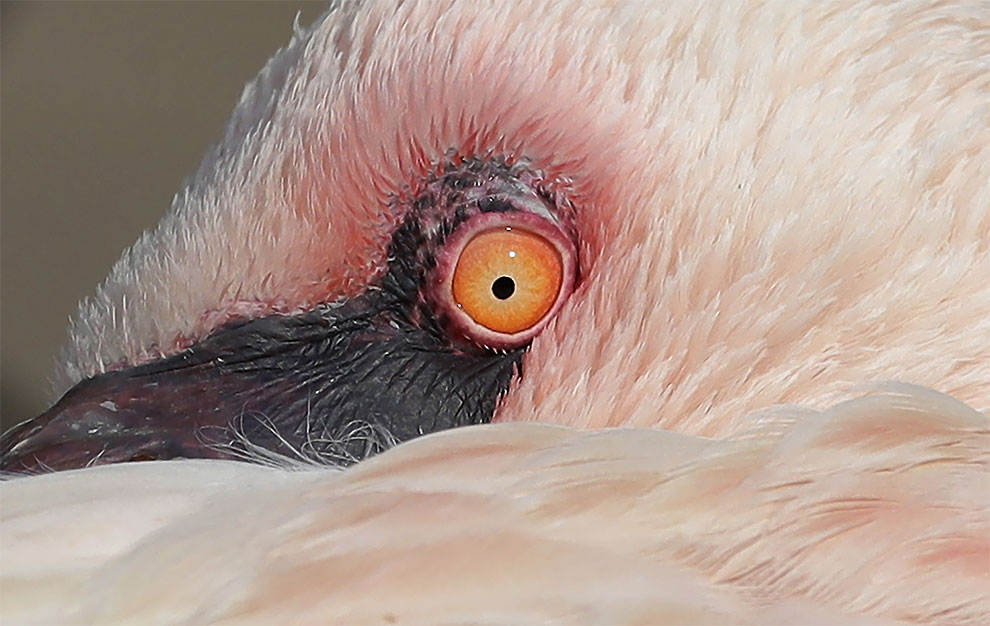 A Lesser Flamingo is seen at the Le Cornelle Animal Park, in Valbrembo, near Milan, Italy, February 17, 2017. (Photo by Antonio Calanni)/AP Photo 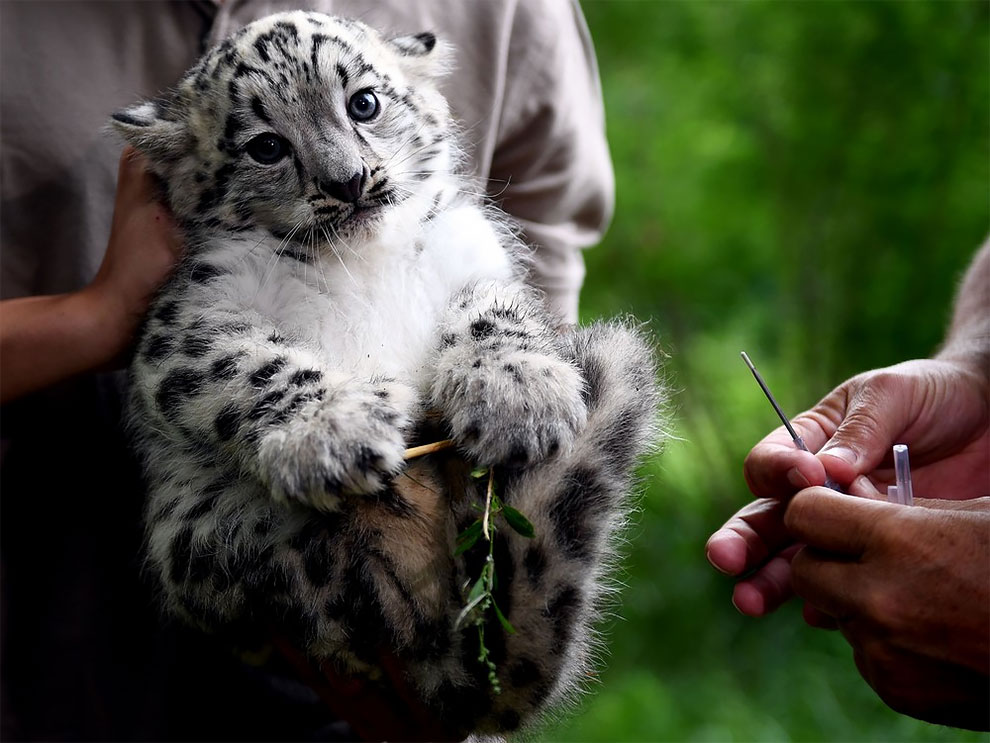 A baby snow leopard is prepared to get his first vaccination on August 10, 2017 at the Tierpark zoo in Berlin. The male snow leopard was born on June 13, 2017 and still has no name. (Photo by Britta Pedersen/AFP Photo) 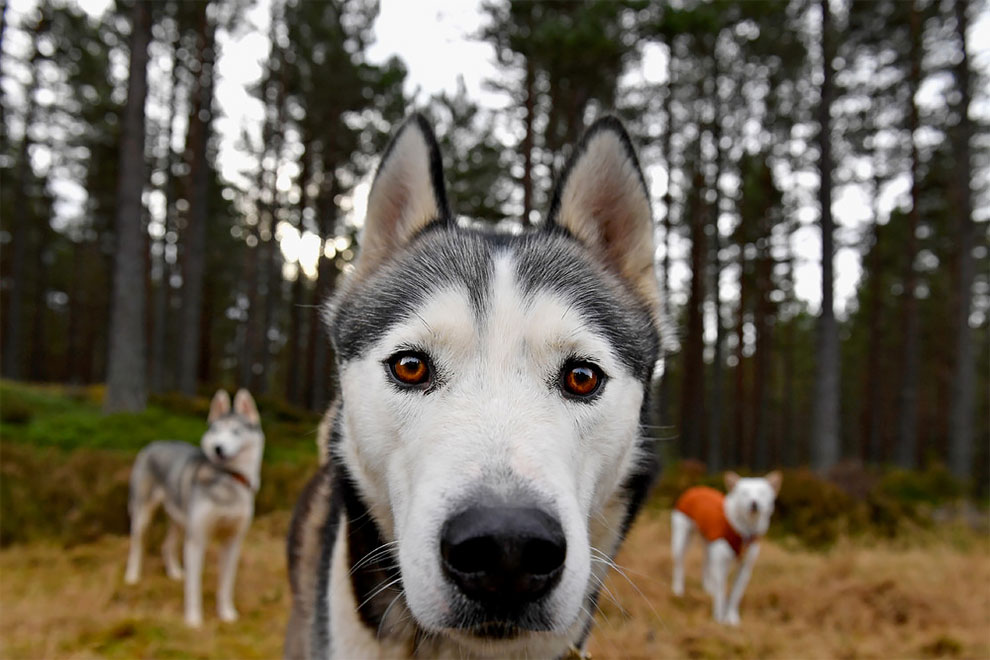 Huskies wait for practice at a forest course ahead of the Aviemore Sled Dog Rally on January 24, 2016 in Feshiebridge, Scotland. Huskies and sledders prepare ahead of the Siberian Husky Club of Great Britain 34th race taking place at Loch Morlich this weekend near Aviemore. (Photo by Jeff J. Mitchell/Getty Images) 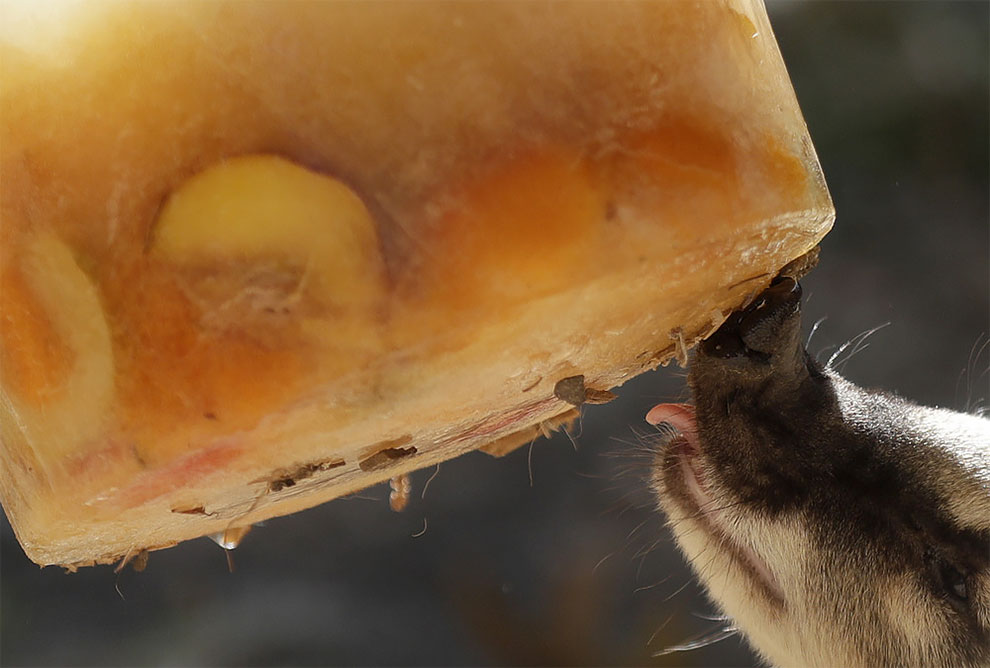 A lemur licks a block of ice containing fruit at Rome’s Bioparco zoo on July 5, 2017. Zookeepers at the Bioparco often give animals ice blocks with either fruit or meat on hot summer days. (Photo by Gregorio Borgia/AP Photo) 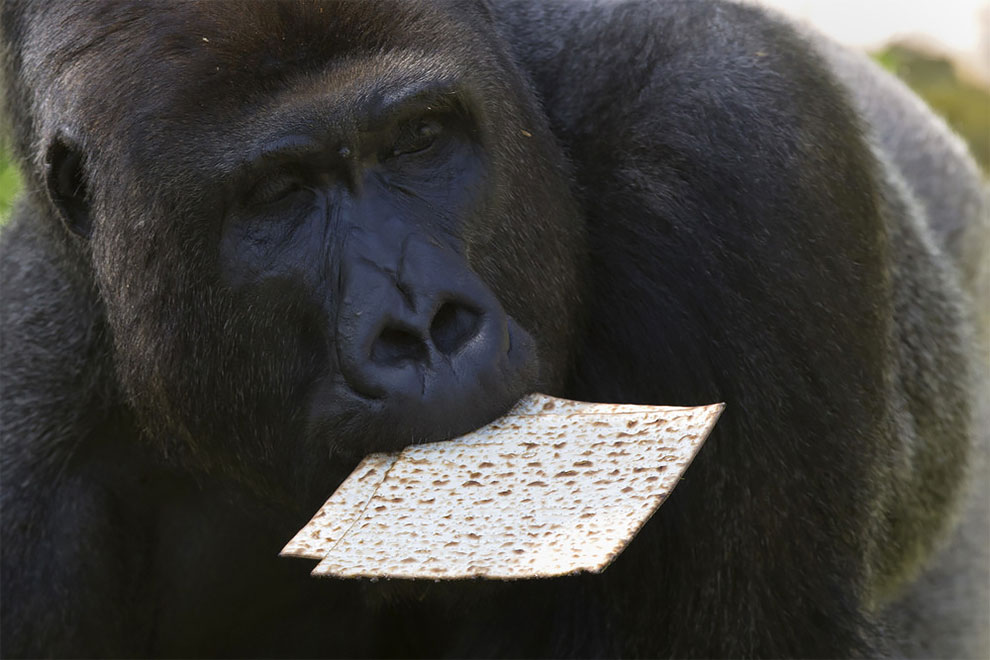 A gorilla eats matzo, a traditional handmade unleavened bread for Passover, at the Ramat Gan Safari, near Tel Aviv, Israel, April 6, 2017. Gorillas and other animals are usually fed bread, but since the zookeepers and handlers cannot touch any leavened products during the week-long holiday of Passover, that marks the biblical Jewish exodus from Egypt, they are given matzah. (Photo by Sebastian Scheiner/AP Photo) 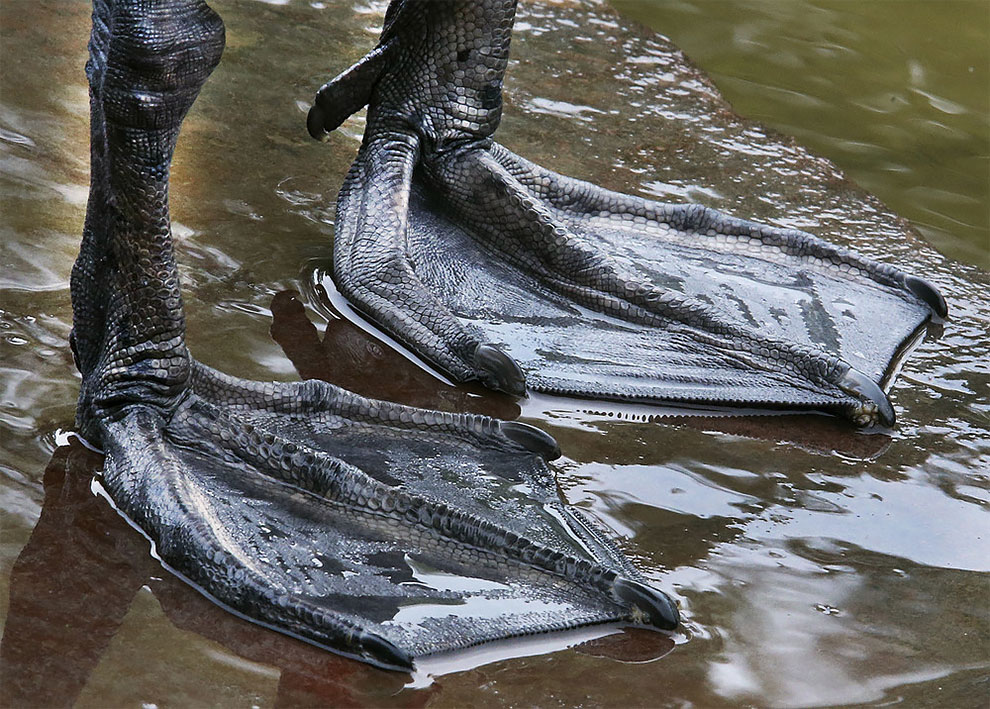 A swan walks along the banks of the river Main in Frankfurt, Germany, May 3, 2017. (Photo by Michael Probst/AP Photo) 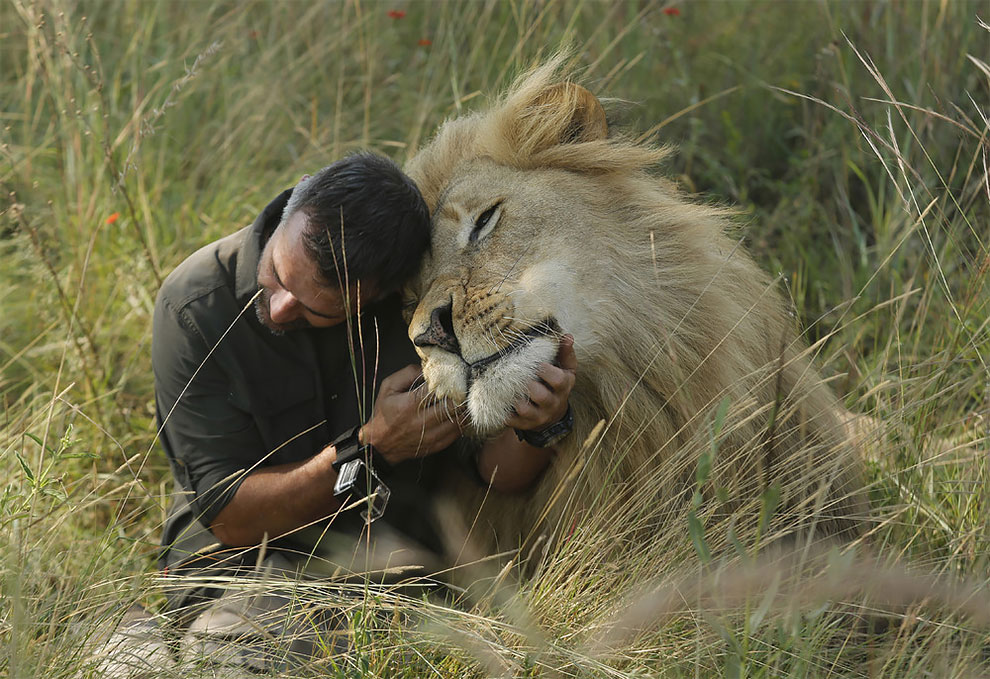 Kevin Richardson, popularly known as the “lion whisperer”, interacts with one of his lions while out for a walk in the Dinokeng Game Reserve, near Pretoria, South Africa, March 15, 2017. Richardson seeks to raise awareness about the plight of Africa’s lions, whose numbers in the wild have dwindled in past decades. (Photo by Denis Farrell/AP Photo) 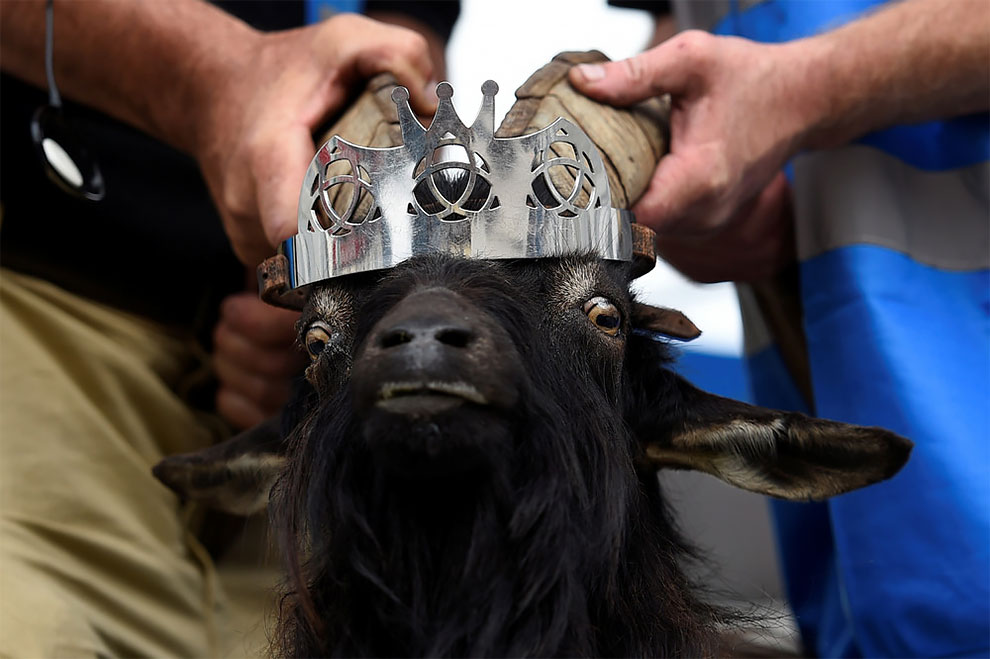 A crown is affixed to a wild goat as it is crowned King Puck and will be held on a platform above the town for three days in Killorglin, Ireland August 10, 2017. (Photo by Clodagh Kilcoyne/Reuters) 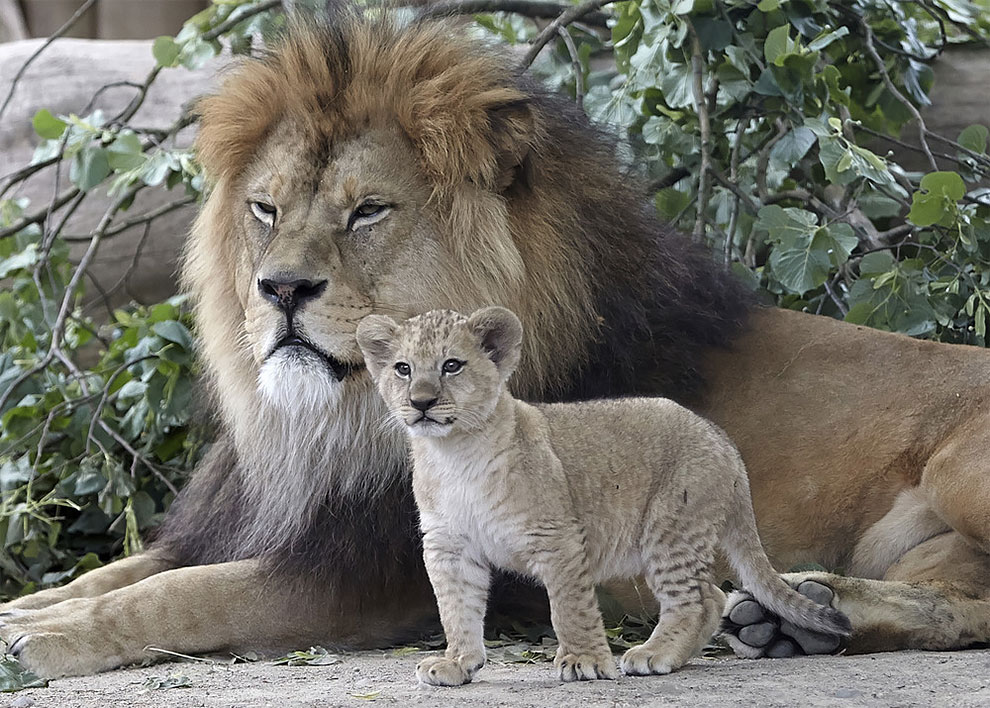 A Barbary lion cub, stands next to its father “Schroeder” at the zoo in Neuwied, Germany, June 26, 2017. (Photo by Thomas Frey/AP Photo) 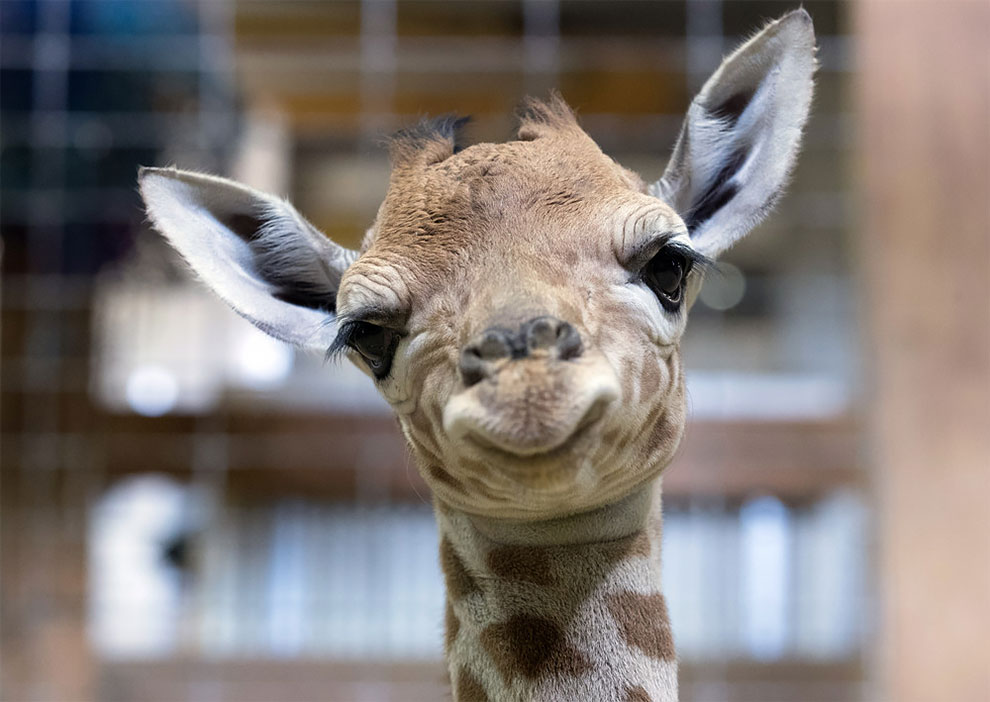 One-day-old baby giraffe calf Gus looks at the camera at Noah’s Ark farm on May 12, 2017 in Bristol, England. The baby giraffe was born yesterday at the zoo farm in North Somerset. In the wild, populations of giraffes are suffering from a continuing decline, with 97,500 estimated in Africa in 2015. Since 1985 the total giraffe population has fallen by 35%. New arrival Gus joins brothers George, 4 and Geoffrey, 2. (Photo by Matt Cardy/Getty Images)