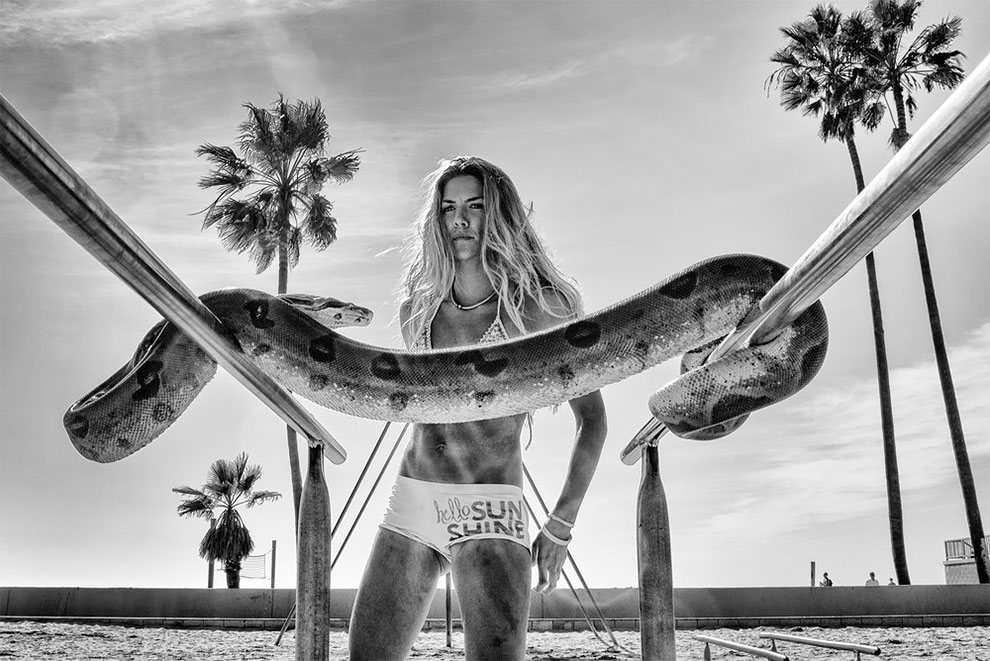 Here: Jenna carefully watches two giant boa constrictors that their owner, a street performer she barely knows, entrusted to her. She is careful to keep the one snake wrapped around exercise bars to prevent a wound in the animal’s mouth from touching the sand and getting infected.

Jenna is a single mom on disability. She suffers from failed back surgery syndrome, acquired from a violent car accident she had as a teenager. She and her young son Jackson can be found most afternoons on the beach. Originally from South Carolina, Jenna came to Venice in 2010 and describes herself as “an open-minded Christian who loves everyone for who they are”. Nowadays Jenna sometimes has trouble reconciling her inclusive progressive values with her family’s conservative political stance, especially in today’s toxic political climate. (Photo by Dotan Saguy)

Over the past three years, Los Angeles-based photographer Dotan Saguy has spent hundreds of hours documenting the diverse culture, people and pageantry of the iconic Venice Beach boardwalk. He was irresistibly drawn to the free-spirited, anti-materialistic and inclusive nature of the world-famous location, which he found to be a breath of fresh air in contrast to Los Angeles’s sometimes homogenized, celebrity-obsessed culture. Venice Beach will be published by Kehrer Verlag in August 2018. An accompanying exhibition will run at Venice Arts Gallery in Venice, Calif., from August 11 to September 21, 2018. 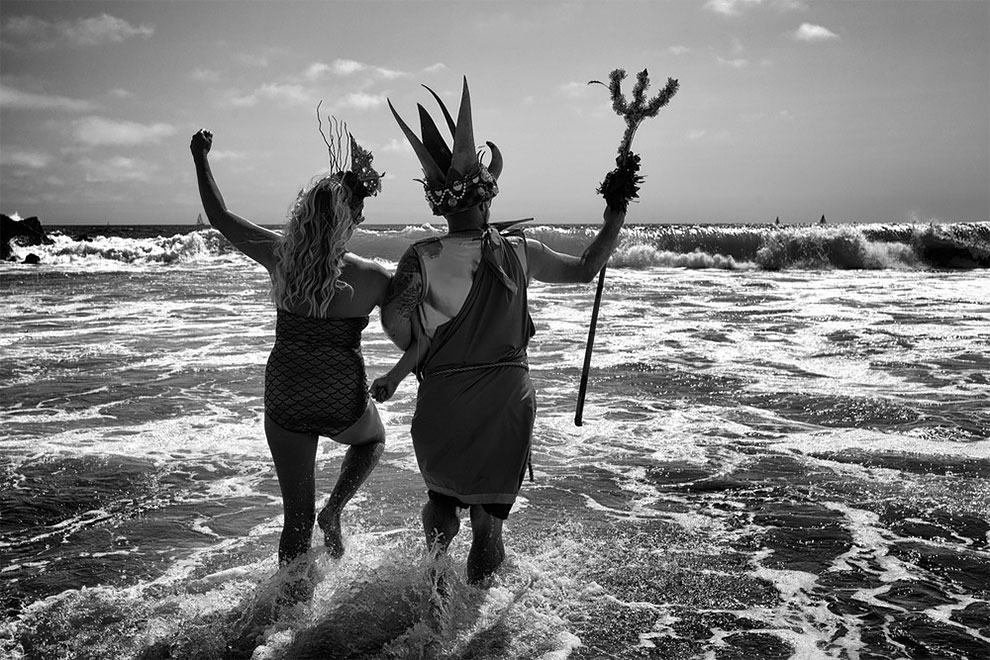 King and Queen Neptune frolic in the Pacific Ocean waters, celebrating the start of summer with the yearly Neptune Parade. Today’s incarnation of the Neptune Parade is inspired by the Venice Mardi Gras, celebrated for the first time in August 1935 with three days of parades and festivities. (Photo by Dotan Saguy) 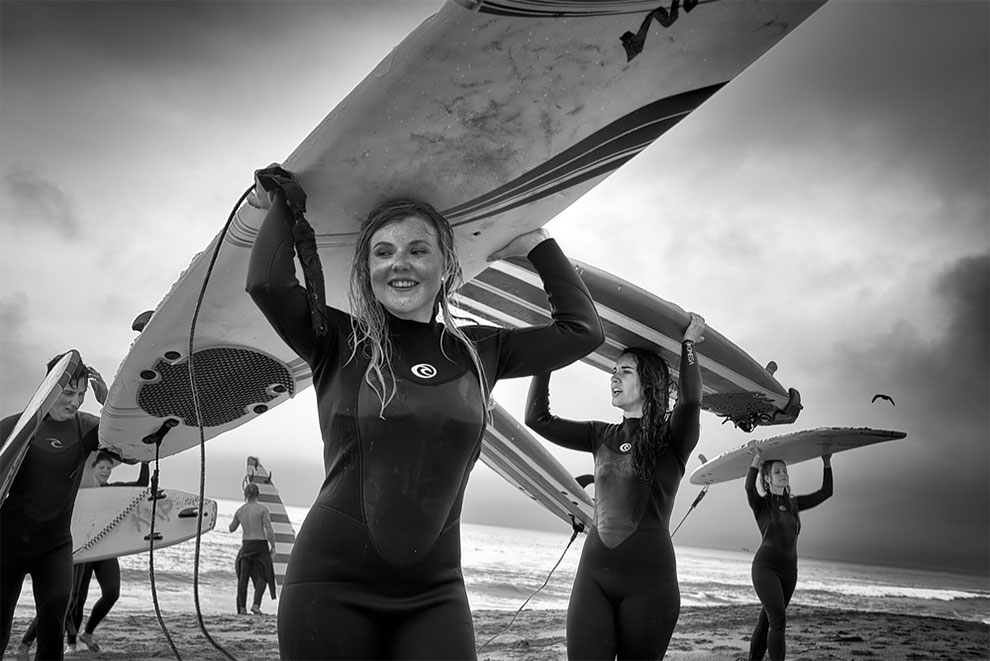 After an exhausting but satisfying surfing lesson on a stormy spring afternoon, a group of teens on a class trip walks back from the ocean carrying their surfboards on their heads. (Photo by Dotan Saguy) 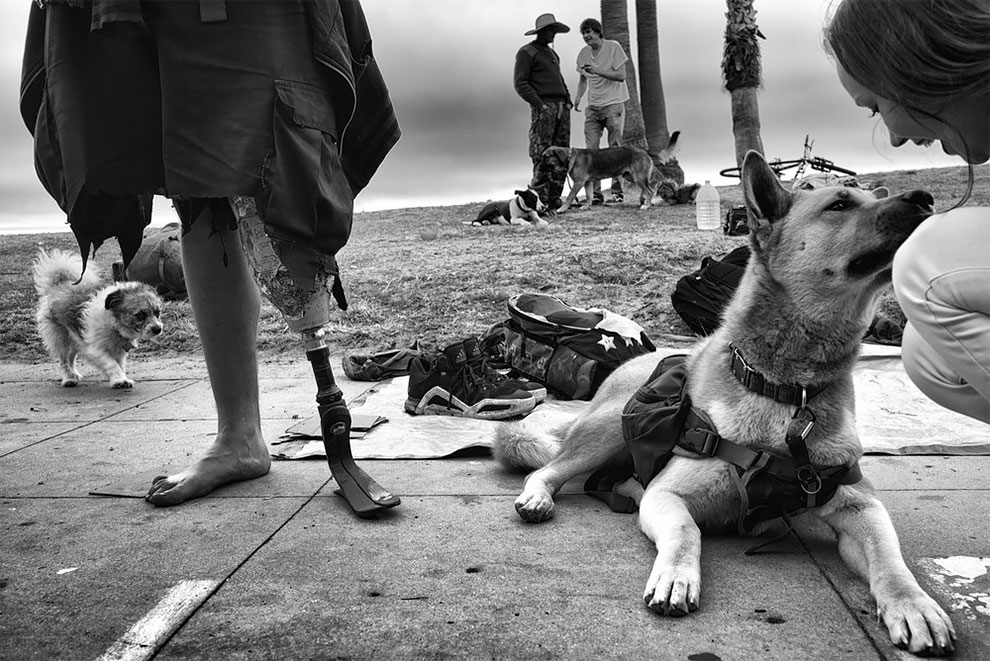 Hopper, the young man with an artificial leg in the foreground, and his friend T, the middle-aged hippie wearing a hat in the background, hang out with their many dogs on the Venice boardwalk. A young woman stops to pet one of the furry companions. Within the category that we call “the homeless” is a diverse mix of people. Some are chronically homeless and suffer from mental illness. Others, like T and Hopper, proudly identify as “home-free” and come to Venice to live the bohemian lifestyle for a few days before setting sail for another destination. (Photo by Dotan Saguy) 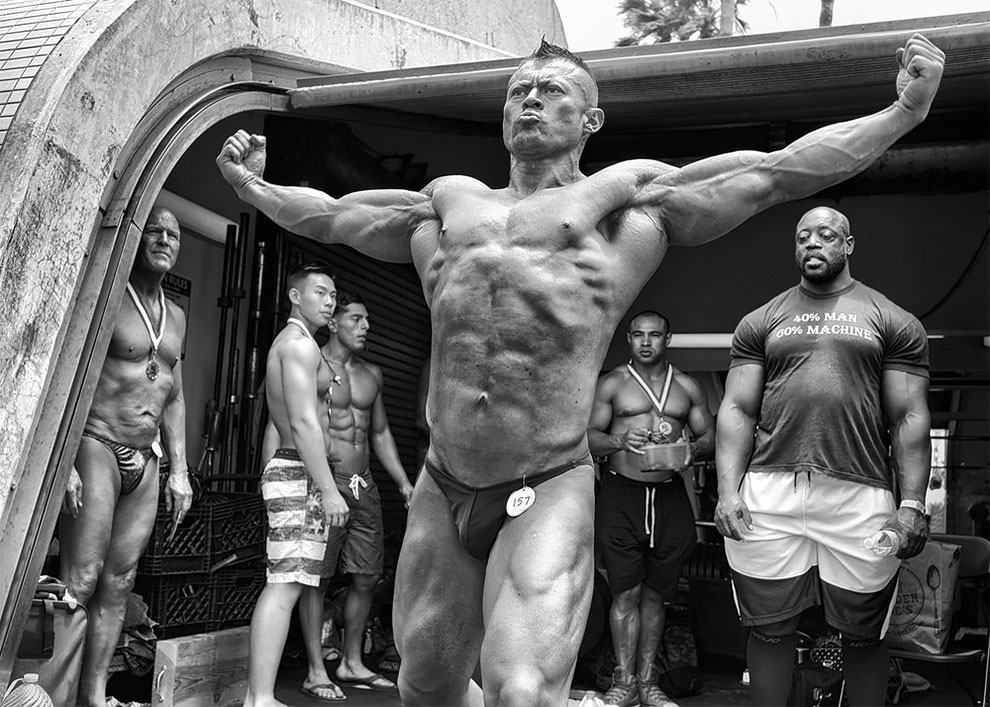 A bodybuilder practices a pose backstage at the Mr. and Mrs. Muscle Beach Competition as a group of wary competitors watch him. Once the home gym of bodybuilders Arnold Schwarzenegger and Lou Ferrigno, the facility still serves the community as an iconic but accessible outdoor weight room. With a yearly membership cost of only $170 and aging gym equipment, the community gym has not yet succumbed to the gentrificationthat surrounds it. (Photo by Dotan Saguy) 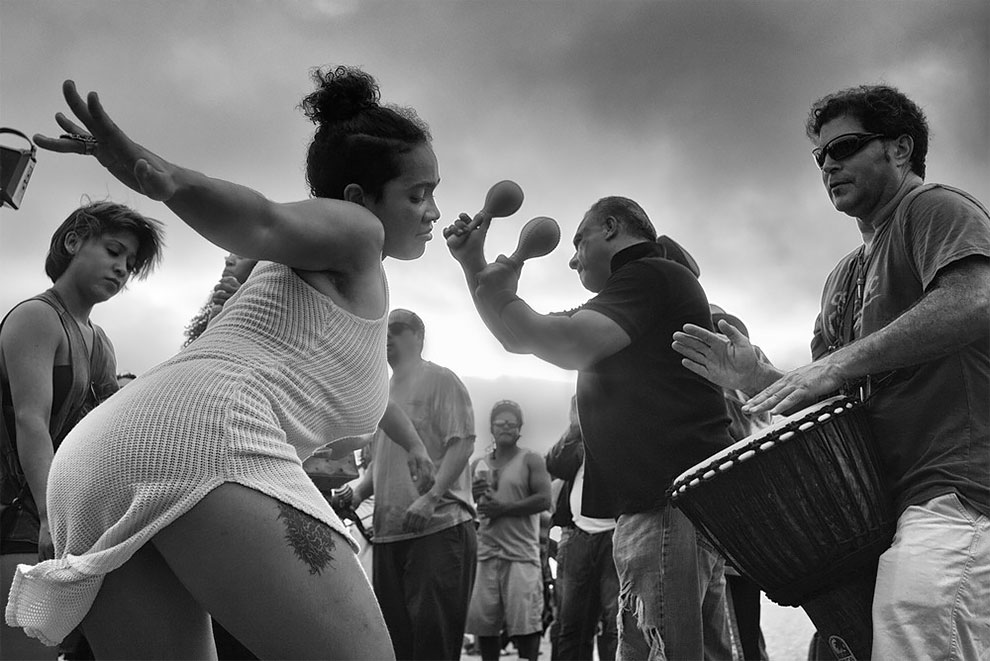 A young woman dances to the entrancing rhythms at the Venice Beach Drum Circle, as the sun sets over the ocean on a warm summer evening. (Photo by Dotan Saguy) 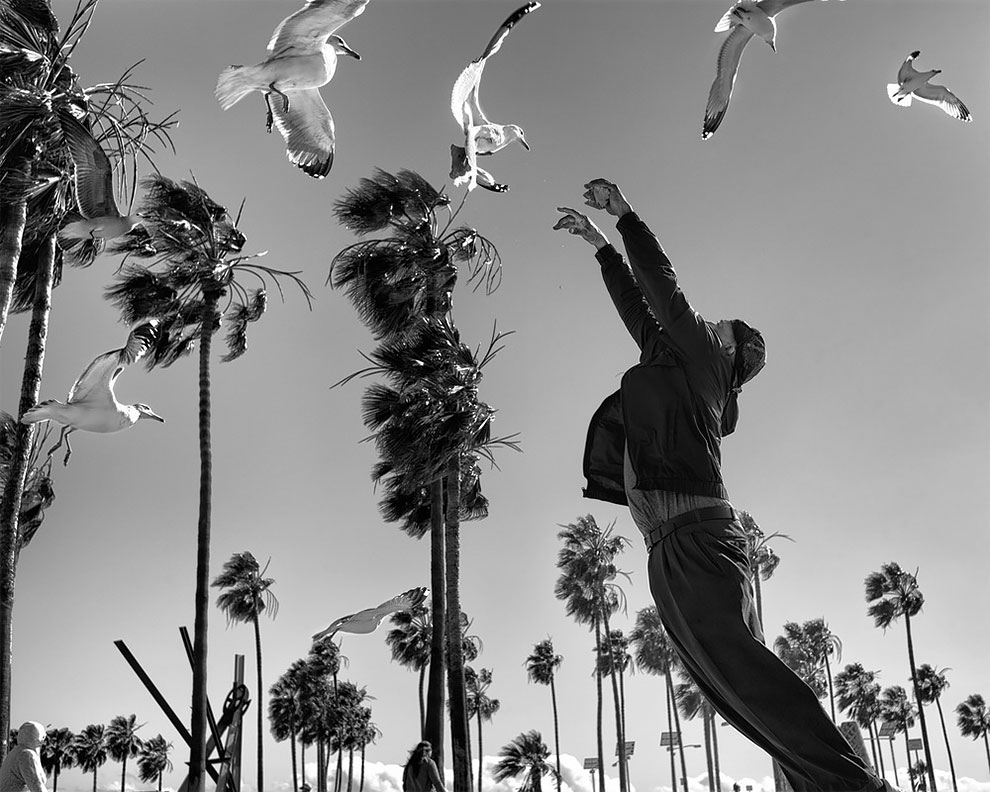 On the windiest day I ever witnessed in Venice Beach, a homeless man waits for an evening bus to take him to a downtown shelter. He kills time by feeding seagulls from a bag of chips, amused by the fact that the birds can barely move due to the violent winds. Suddenly the man realizes that one of the seagulls is within reach and jumps to catch the struggling bird. He misses, but for a split second, looks like he is about to take flight himself. (Photo by Dotan Saguy) 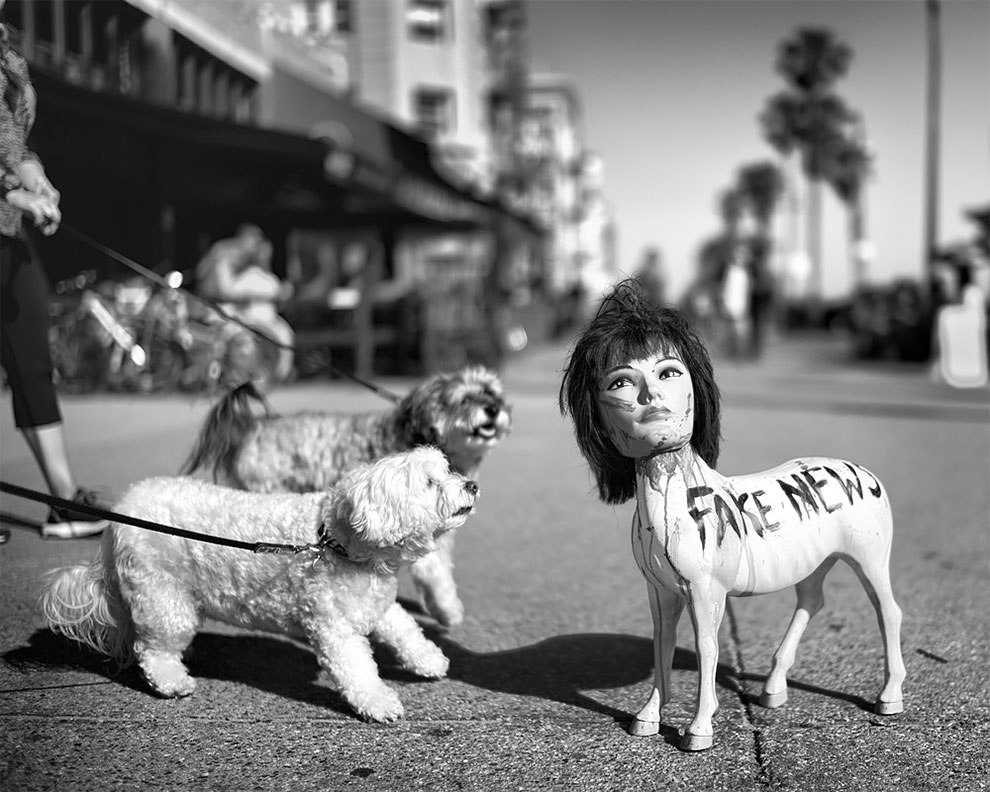 Two dogs, taking an afternoon stroll on the boardwalk with their respective owners, seem quite surprised to stumble upon a provocative creation made from recycled materials by a local street artist. (Photo by Dotan Saguy) 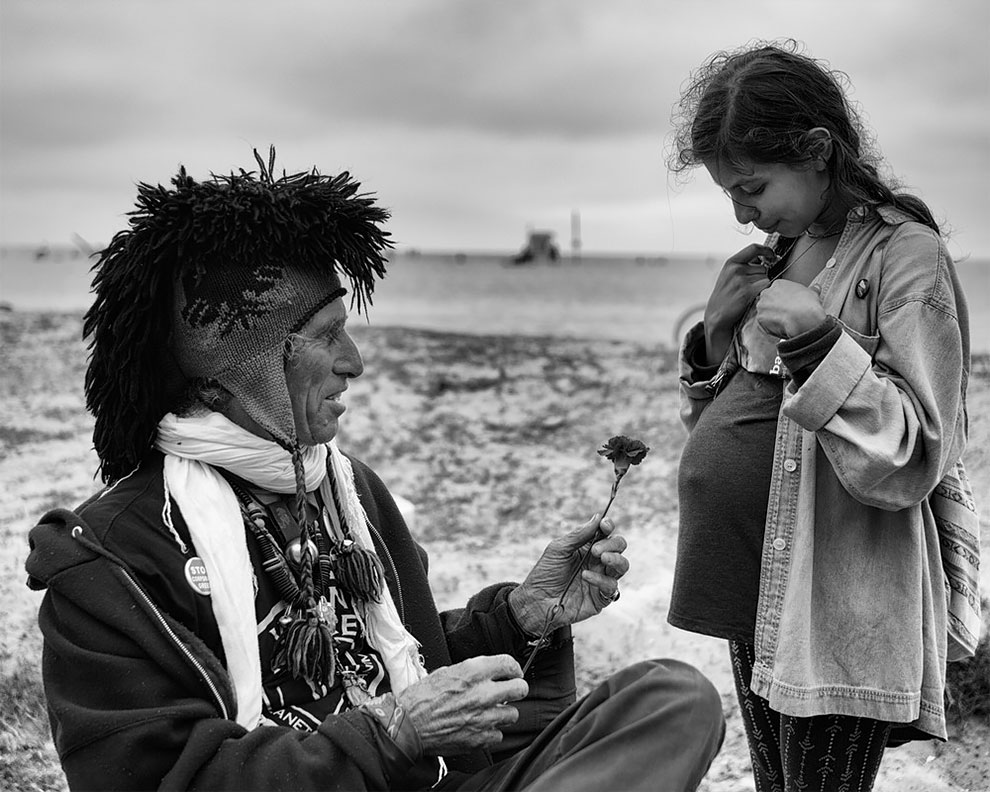 The older man, who goes by the name of “Jingles”, has been preaching for animal rights and a vegan lifestyle for many years from his booth on the Venice boardwalk. (Photo by Dotan Saguy) 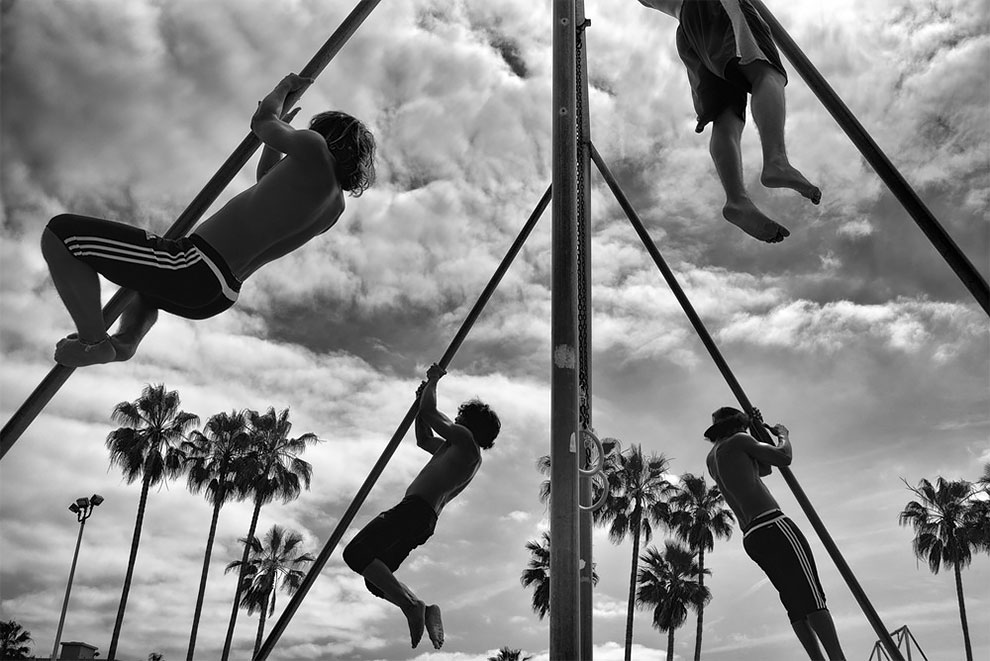 Venice Dynamics is a group of calisthenics enthusiasts who meet regularly in the sand pit by Muscle Beach to exercise together. On “Challenge Monday”, their fearless leader Rafael improvises different fitness routines, creatively using the sand pit’s exercise bars, walls, and adjacent beach. While the regulars’ acrobatic abilities are spectacular, they are humble and nonjudgmental, often encouraging curious passers-by to join in. (Photo by Dotan Saguy)