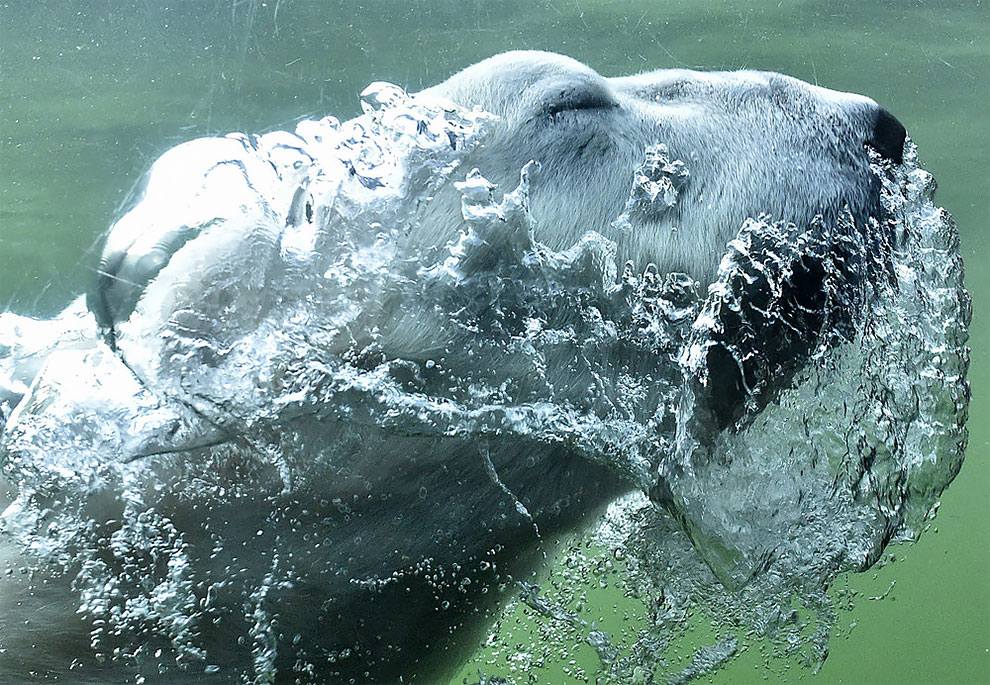 A polar bear blows bubbles as he dives in the water at its enclosure during warm late summer weather at the zoo in Gelsenkirchen, Germany, October 16, 2018. (Photo by Martin Meissner/AP Photo) 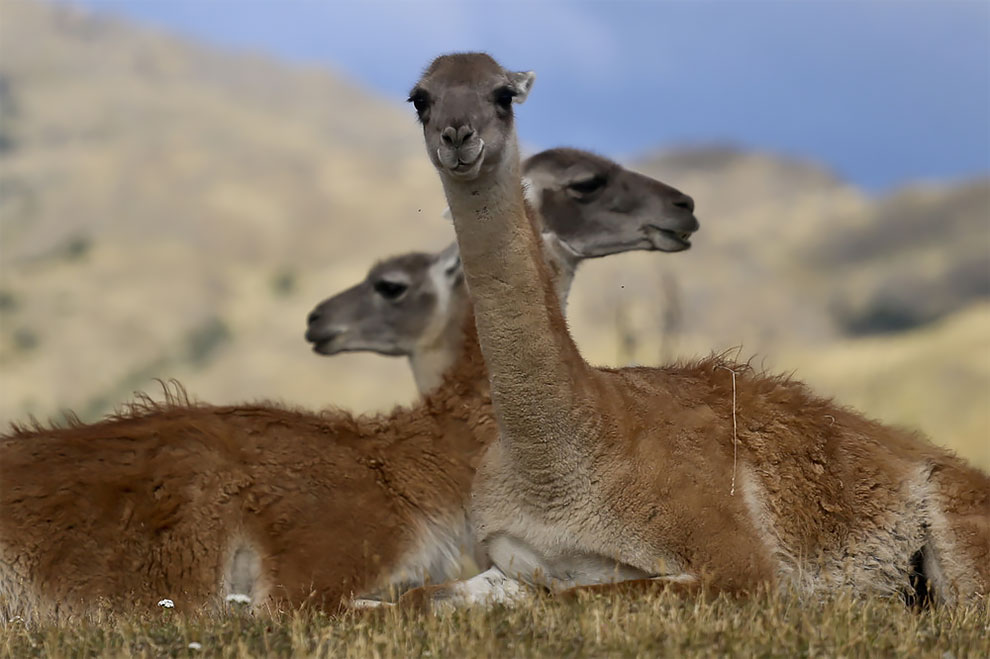 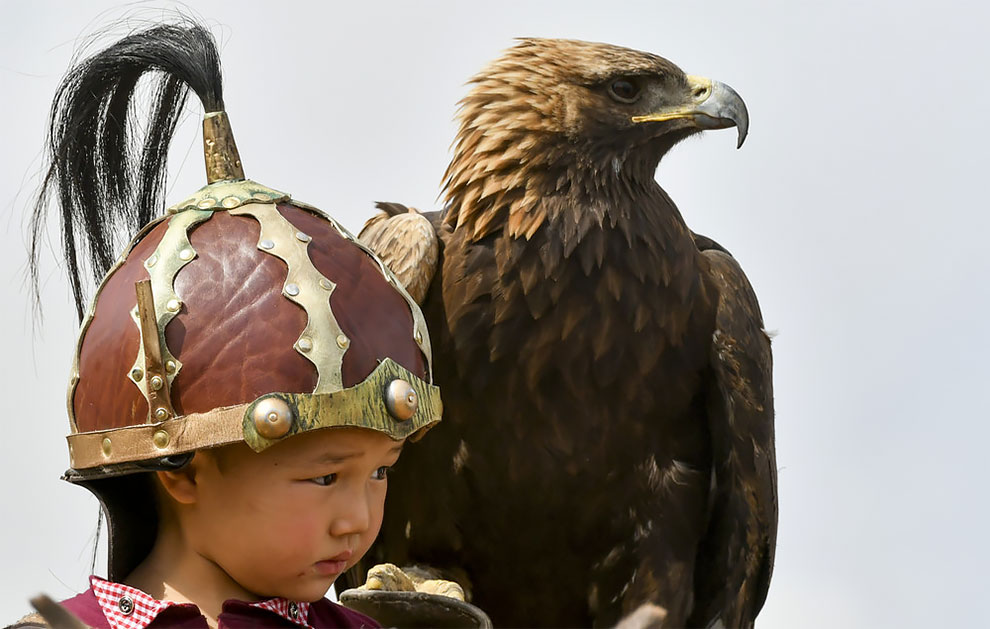 A Kyrgyz boy holds a golden eagle for an eagle hunt during the Third Nomad Games, in Cholpon-Ata, 250 kilometers (156 miles) of Bishkek, Kyrgyzstan on September 6, 2018,. The Central Asian nation of Kyrgyzstan held its biennial Nomad Games to promote and celebrate traditional sports of nomadic people. The week-long competition, which is held in a gorge near the picturesque Lake Issyk-Kul, feature traditional sports of nomad peoples such as horseback wrestling and goat polo. (Photo by Vladimir Voronin/AP Photo) 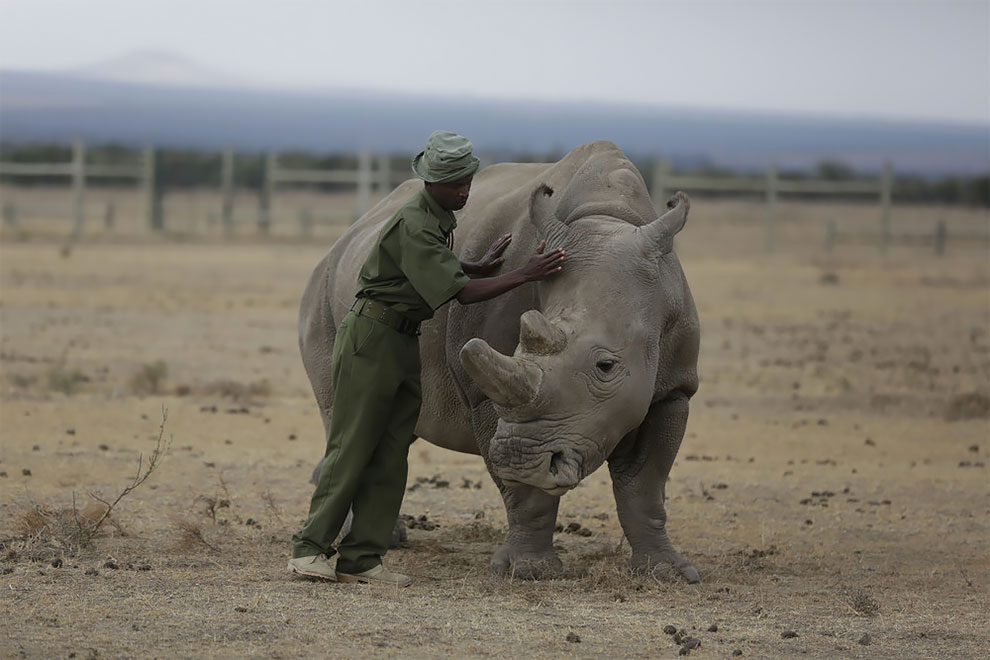 Keeper Zachariah Mutai attends to Fatu, one of only two female northern white rhinos left in the world, in the pen where she is kept for observation, at the Ol Pejeta Conservancy in Laikipia county in Kenya March 2, 2018. The health of the sole remaining male northern white rhino, 45-year-old Sudan who also lives at Ol Pejeta, is deteriorating and his minders said Thursday that his “future is not looking bright”. (Photo by Sunday Alamba/AP Photo) 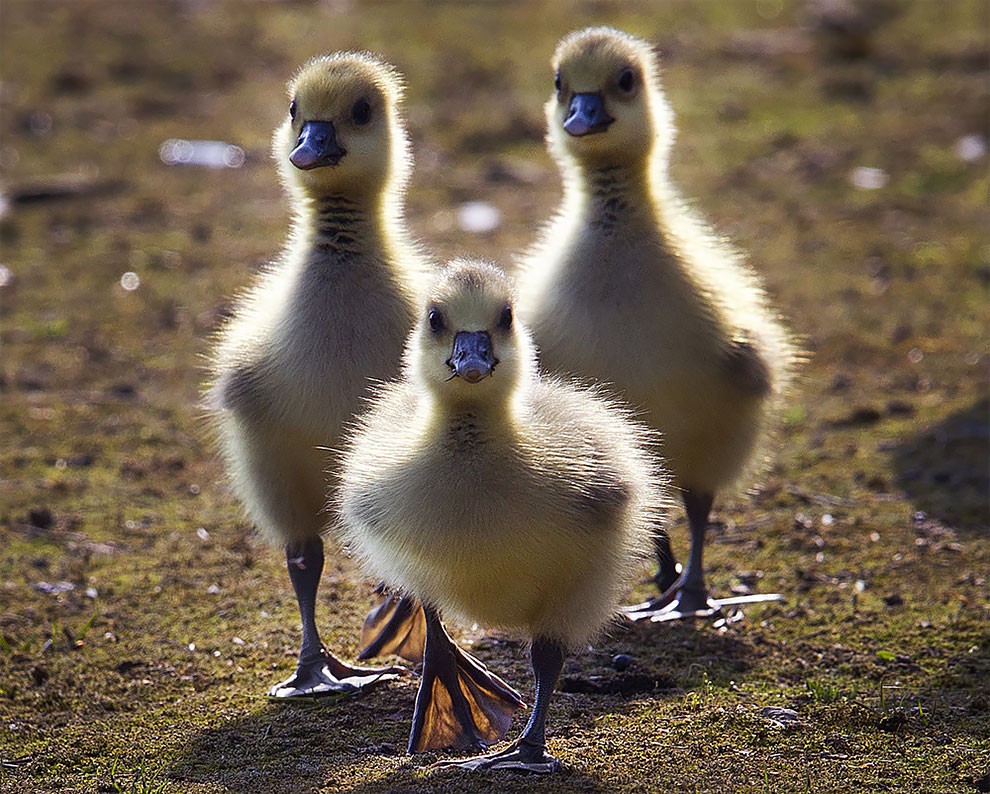 Three goslings walk on a meadow near the river Main in Frankfurt, Germany, on a sunny, April 17, 2018. (Photo by Michael Probst/AP Photo) 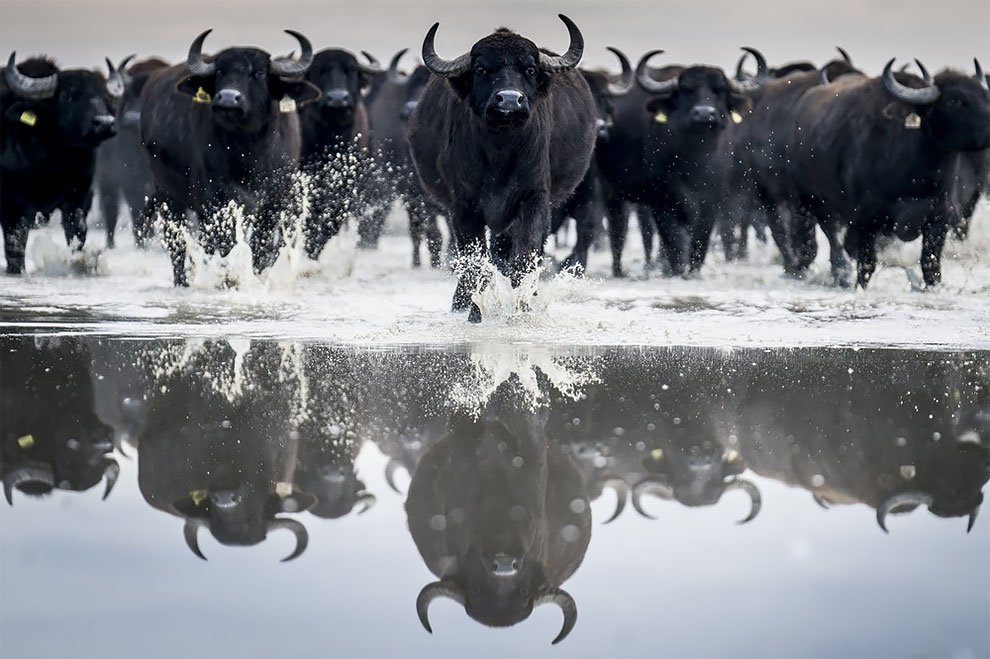 A herd of some 120 buffaloes are driven in Kiskunsag National Park from their winter habitat in Szabadszallas to the animal farm of Fulopszallas, 87 kms south of Budapest, Hungary, Thursday, January 4, 2018. (Photo by Sandor Ujvari/MTI via AP Photo) 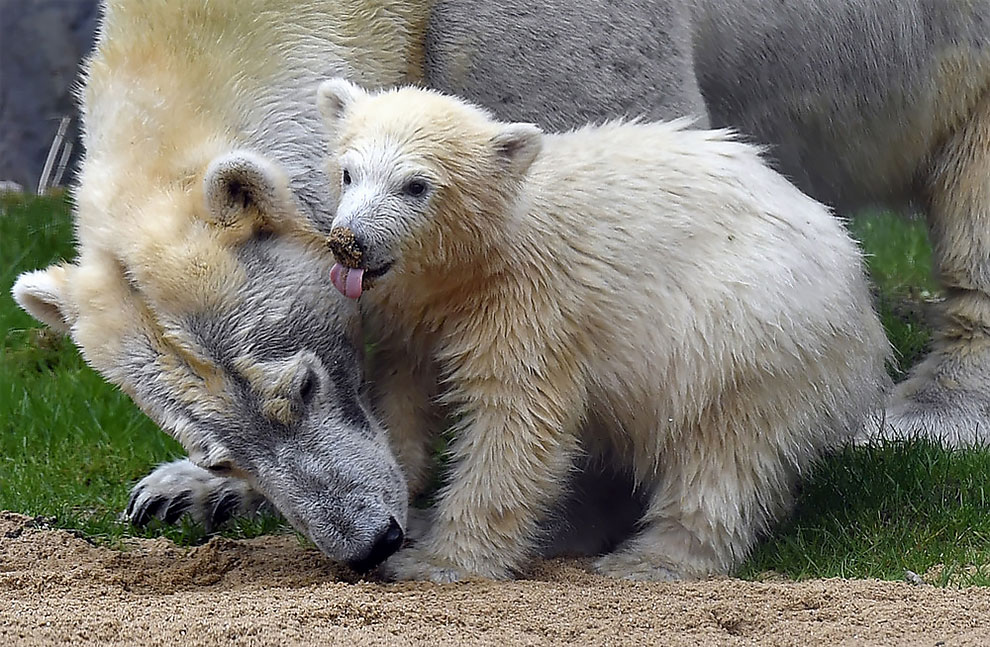 The little polar bear baby Nanook makes the first steps with her mother outside their cave at the compound at the zoo in Gelsenkirchen, Germany, April 13, 2018. The little bear was born last December and stayed with mother Lara inside until today. (Photo bt Martin Meissner/AP Photo) 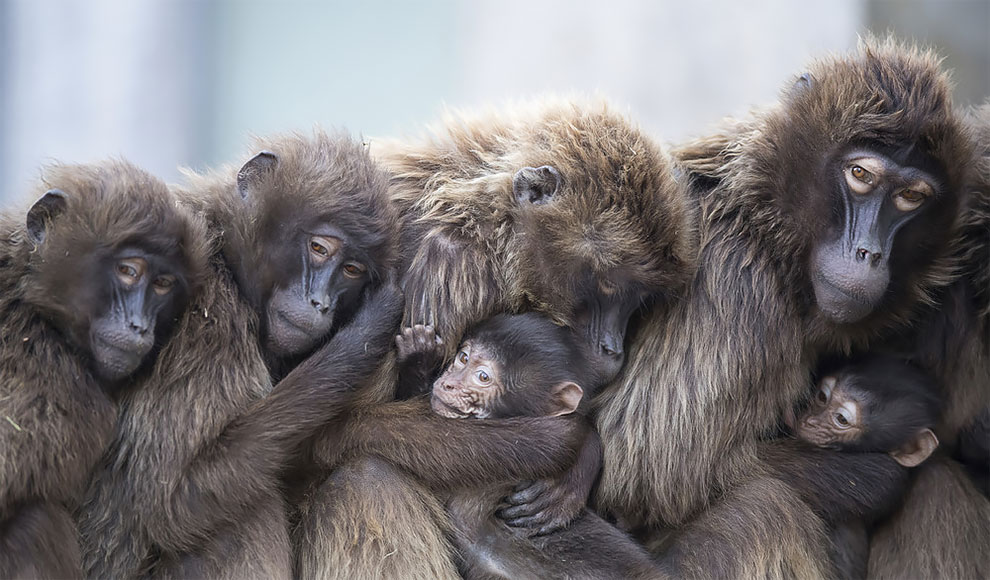 Several female Gelada baboons, also known as bleeding-heart baboons, cuddle with their youngs in order to keep warm at the Wilhelma zoo in Stuttgart, Germany on January 3, 2018. (Photo by Sebastian Gollnow/DPA via AP Photo) 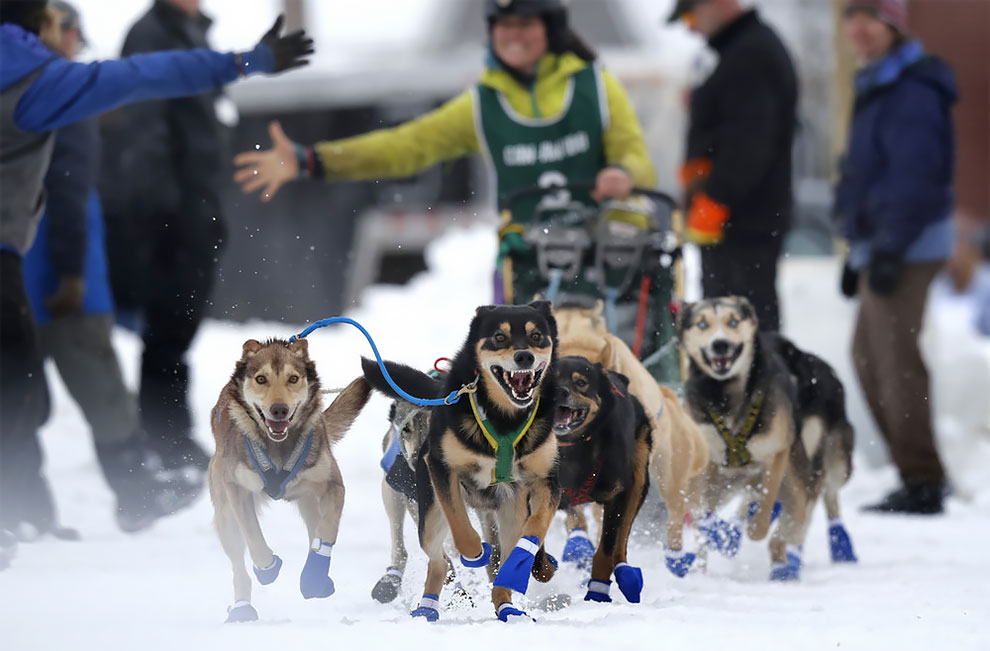 Sally Manikian, of Shelburne, N.H., gets a high five as her Alaskan huskies charge from the start of the Irving Woodlands Can Am Crown 100-mile sled dog race, March 3, 2018, in Fort Kent, Maine. (Photo by Robert F. Bukaty/AP Photo) 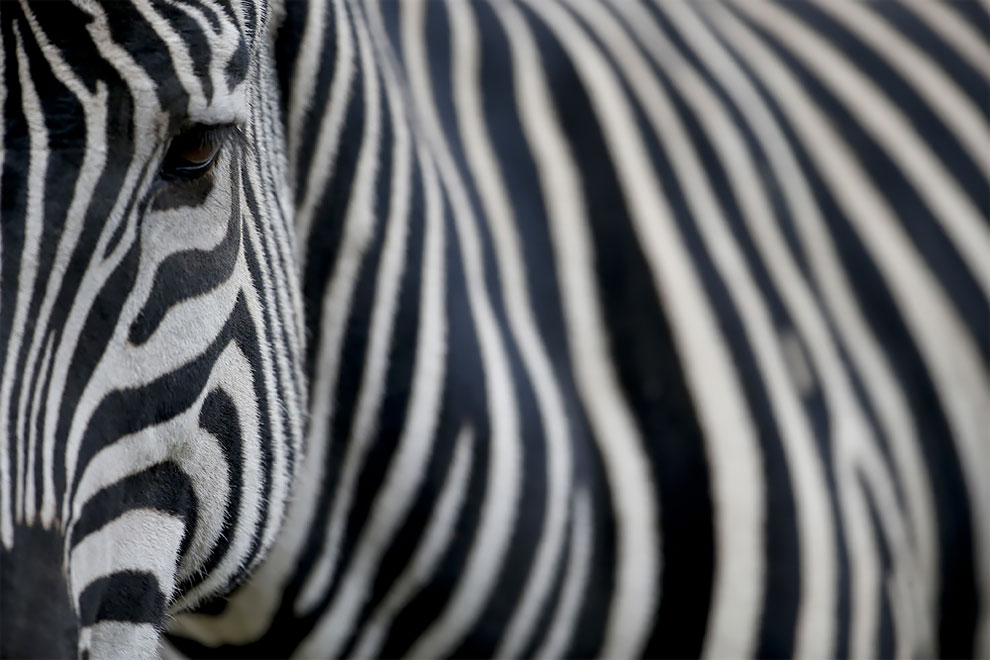 A zebra stands inside her enclosure at the “eco-park” in Buenos Aires, Argentina on August 7, 2018. The zoo was inaugurated in 1875 on what was then a quiet patch on the outskirts of Buenos Aires. (Photo by Natacha Pisarenko/AP Photo) 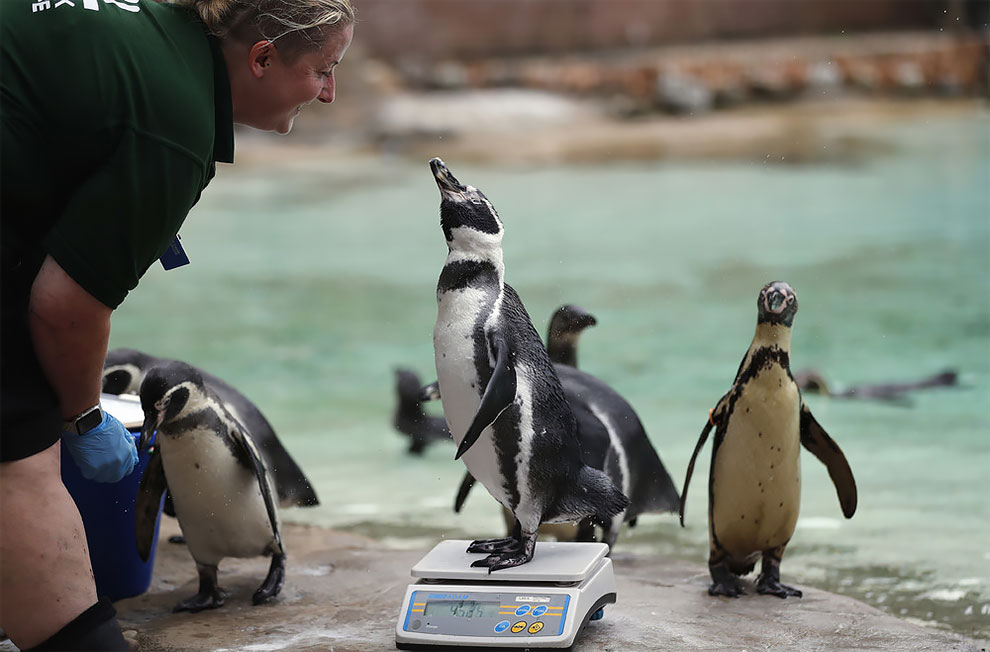 A penguin reacts with a zoo keeper as it stands on weighing scales for the Zoo’s annual weigh in, in London, August 23, 2018. Home to more than 19,000 animals in their care, 800 different species, zookeepers regularly record the heights and weights of all the creatures at ZSL London Zoo as a key way of monitoring the residents’ overall wellbeing. (Photo by Frank Augstein/AP Photo) 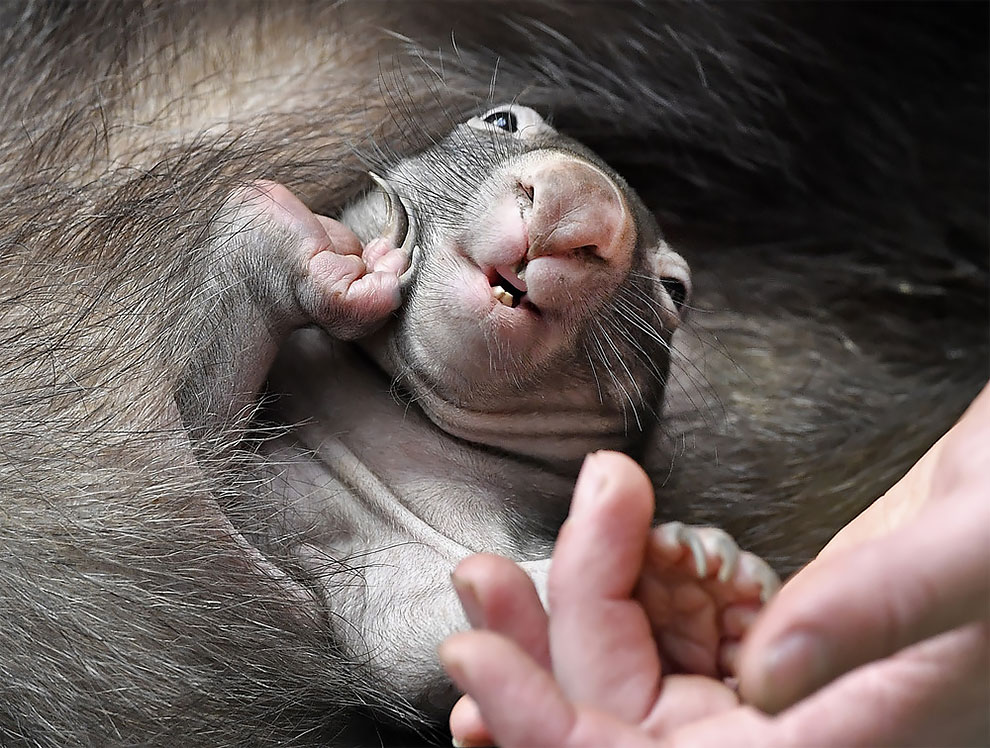 The little new born wombat baby APARI sitting in its mothers pouch at the zoo in Duisburg, Germany, March 29, 2018. Wombat mother TINSEL once was found in the pouch of its dead mother on a street in Australia and was raised by zookeepers before she came to Germany. The zoo tried for 40 years in vain to breed a wombat, until APARI was born as the first one last week. (Photo by Martin Meissner/AP Photo) 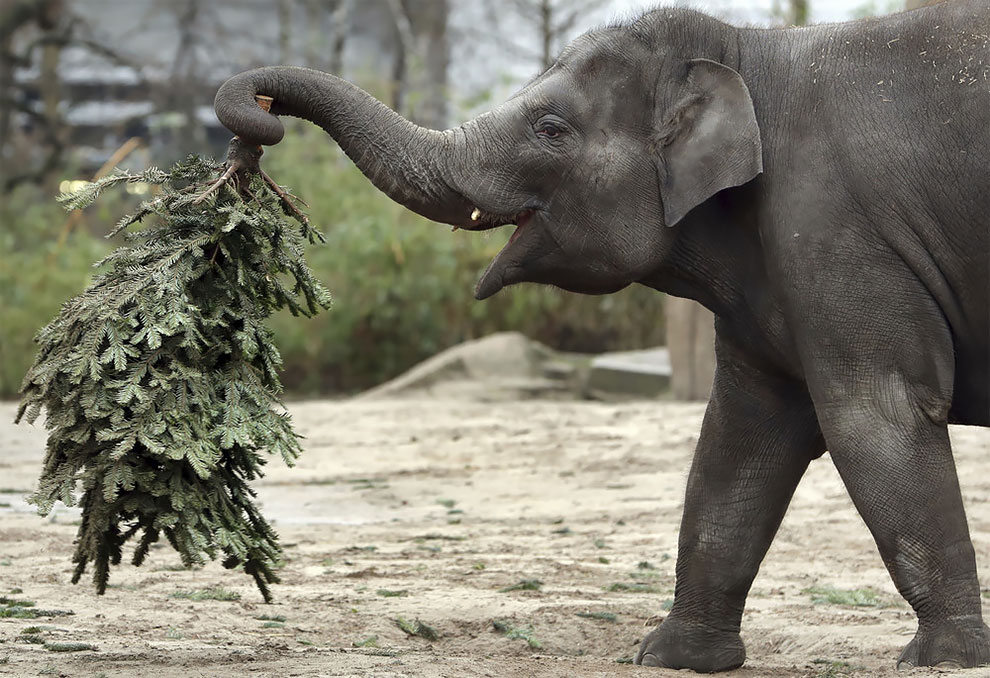 Elephant “Anchali” lifts a Christmas tree at its enclosure at the zoo in Berlin, Germany, January 2, 2018. Every year discarded Christmas trees are offered to the elephants as a snack. (Photo by Michael Sohn/AP Photo) 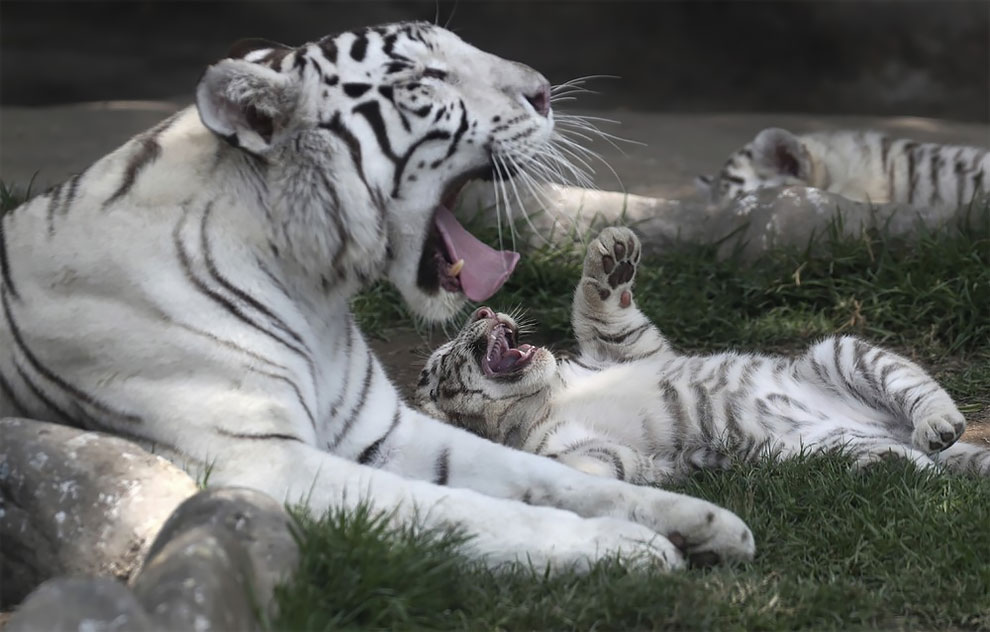 Clarita the Bengal tiger plays with one of her three cubs at the Huachipa Zoo, on the outskirts of Lima, Peru, October 30, 2018. Clarita’s three cubs, who are eight weeks old, will be named through a naming competition according to the zoo. (Photo by Martin Mejia/AP Photo) 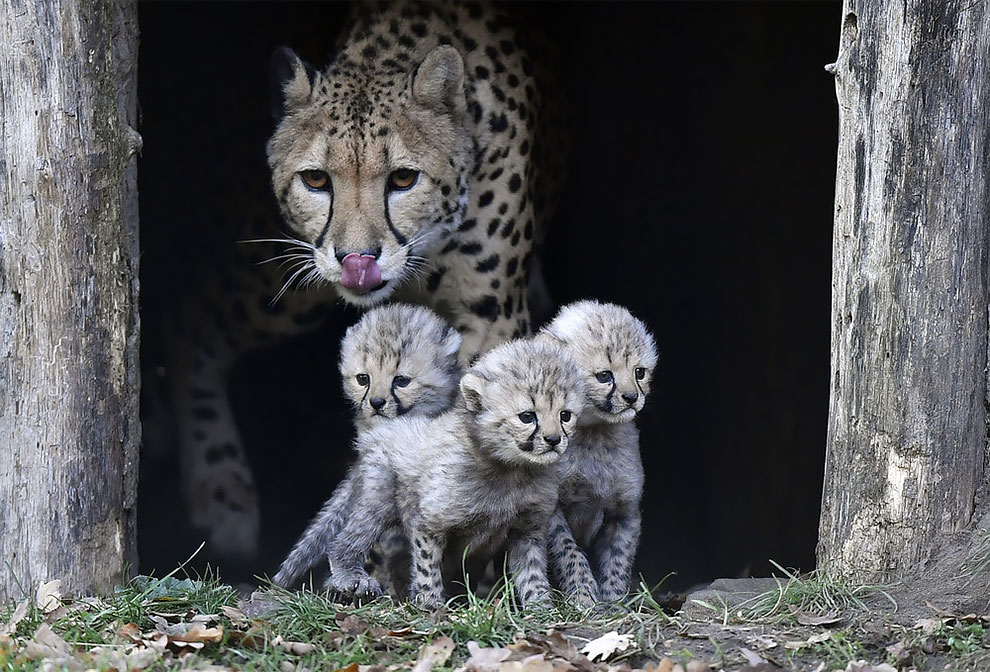 Cheetah mother Isantya looks at its three little babys at their enclosure at the zoo in Muenster, Germany, November 9, 2018. The triplets were born on October 4, 2018 and start to explore their enclosure today. The zoo in Muenster is well known for the successful cheetah breed, about 50 of the endangered animals were born in the zoo since the seventies. (Photo by Martin Meissner/AP Photo) 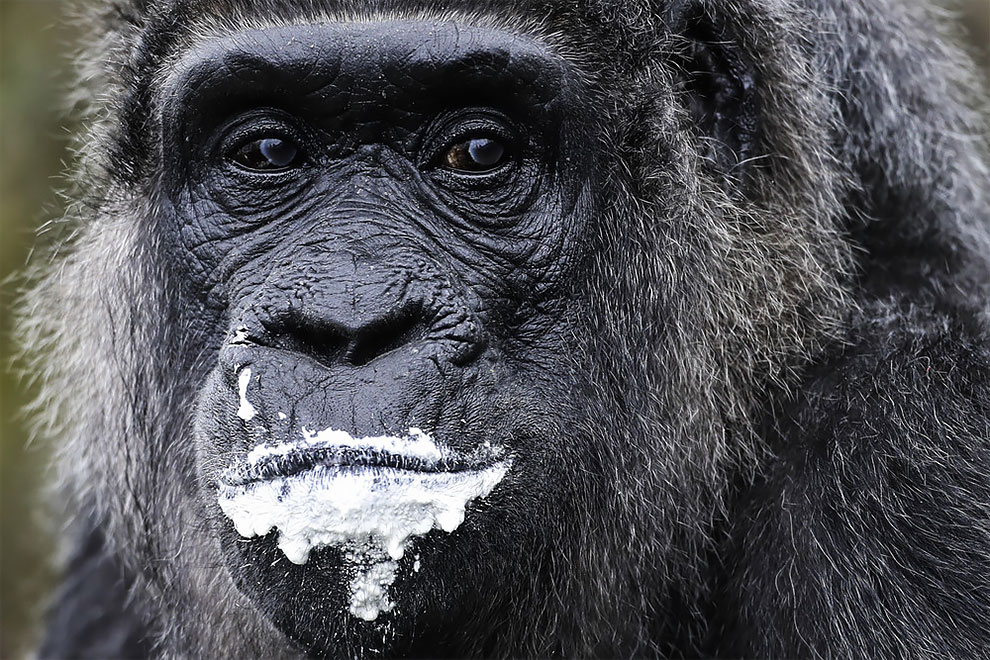 The female Gorilla Fatou eats a “rice-cake” to celebrate her 61st birthday at the zoo in Berlin, Germany, April 13, 2018. According to Zoo officials Fatou is together with Gorilla Trudy at a Zoo in Little Rock at the United State the oldest living female gorilla in the world. Both Gorillas are around 61 years. (Photo by Markus Schreiber/AP Photo) 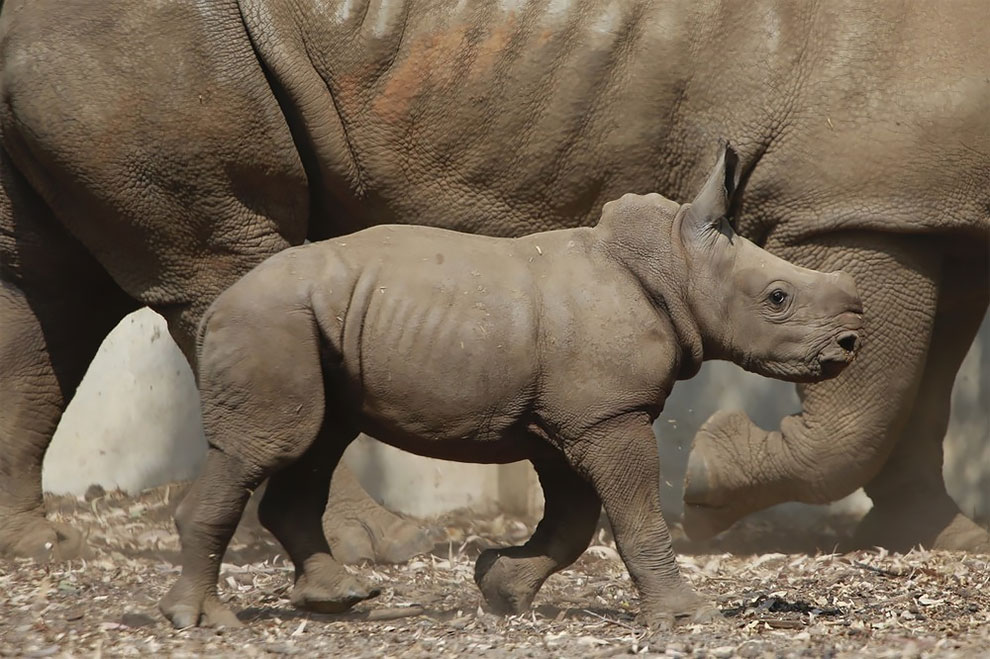 A three week old baby female rhino walks in the Ramat Gan Safari Park near Tel Aviv, Israel, September 17, 2018. The center’s spokeswoman Sagit Horowitz said it is the 30th birth of a rhinoceros in the Safari park. (Photo by Ariel Schalit/AP Photo) 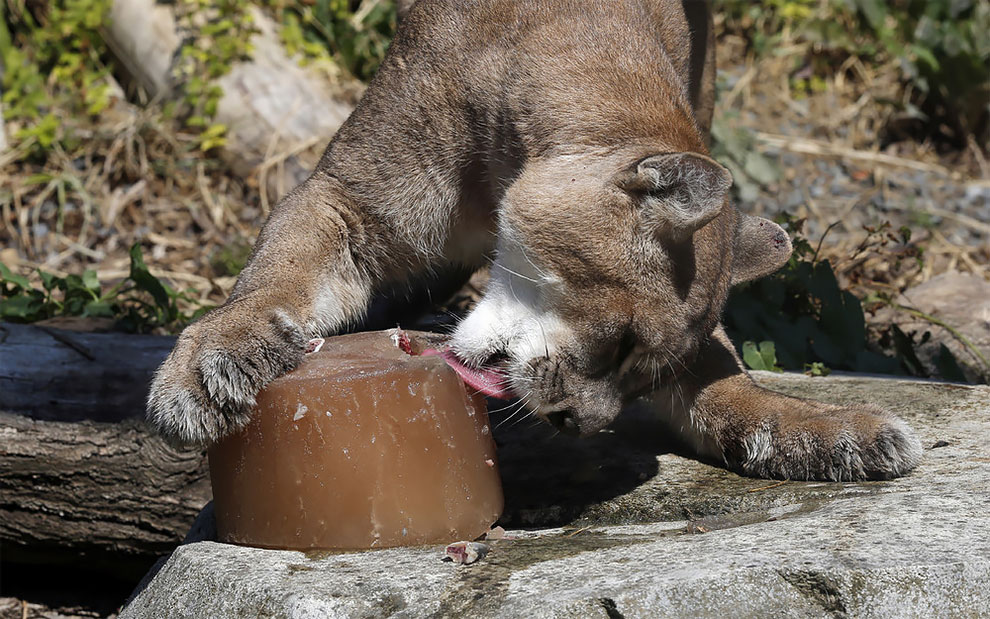 A puma cools off with an ice cube containing frozen meat juice at the Zoo of Vincennes in Paris France, August 2, 2018. Hot air from Africa is bringing a new heatwave to Europe, prompting health warnings about Sahara Desert dust and exceptionally high temperatures that are forecast to peak at 47 degrees Celsius (116.6 Fahrenheit) in some southern areas. (Photo by Michel Euler/AP Photo) 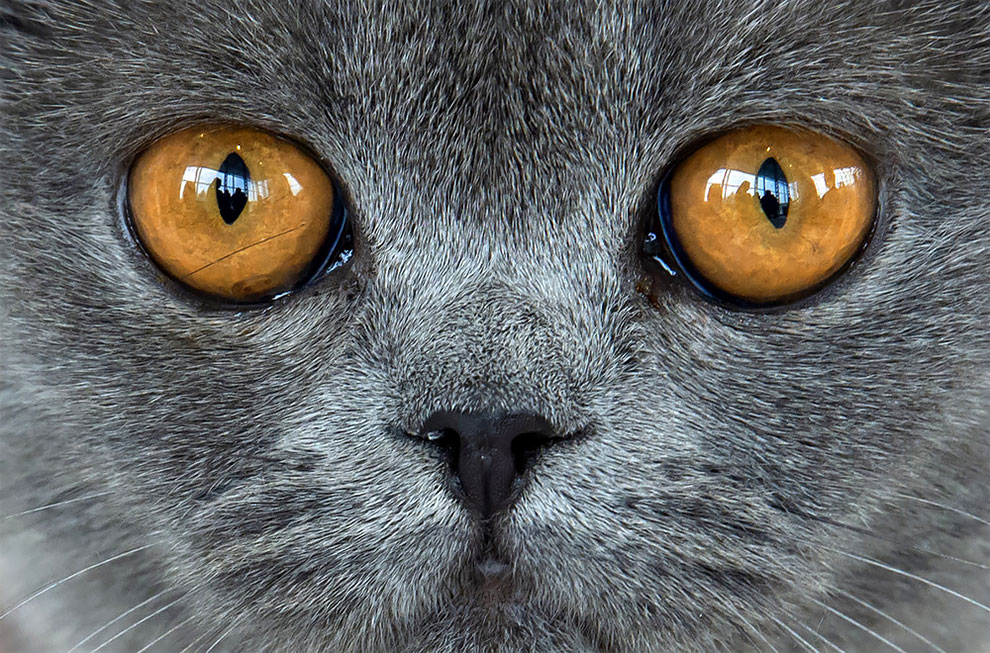 British short hair cat “Amber von der Feenlichtung” waits during an international dog and cat exhibition in Erfurt, Germany, June 16, 2018. More than 4,000 dogs and more than 100 cats and their owners from 21 countries take part at the exhibition and the competitions. (Photo by Jens Meyer/AP Photo) 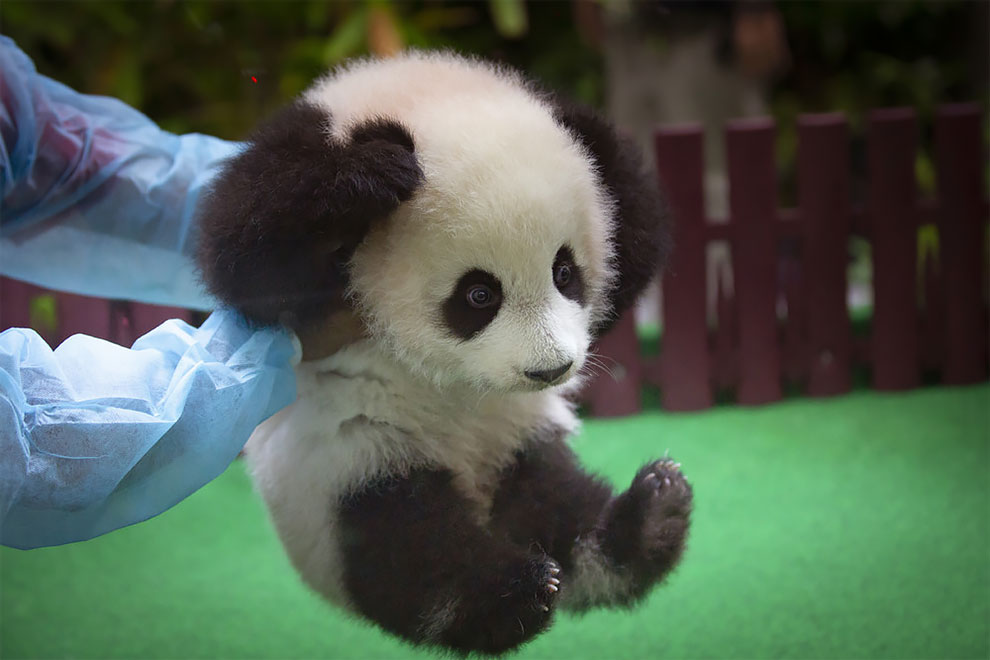 A zoo worker plays with a new baby panda at Malaysia Zoo in Kuala Lumpur, Malaysia, May 26, 2018. The baby panda born in a Malaysian zoo five months ago has made her first media appearance. The female panda, which has not yet been named, is the second offspring of giant pandas Liang Liang and Xing Xing, both of which are on a 10-year loan to Malaysia since 2014. (Photo by Vincent Thian/AP Photo) 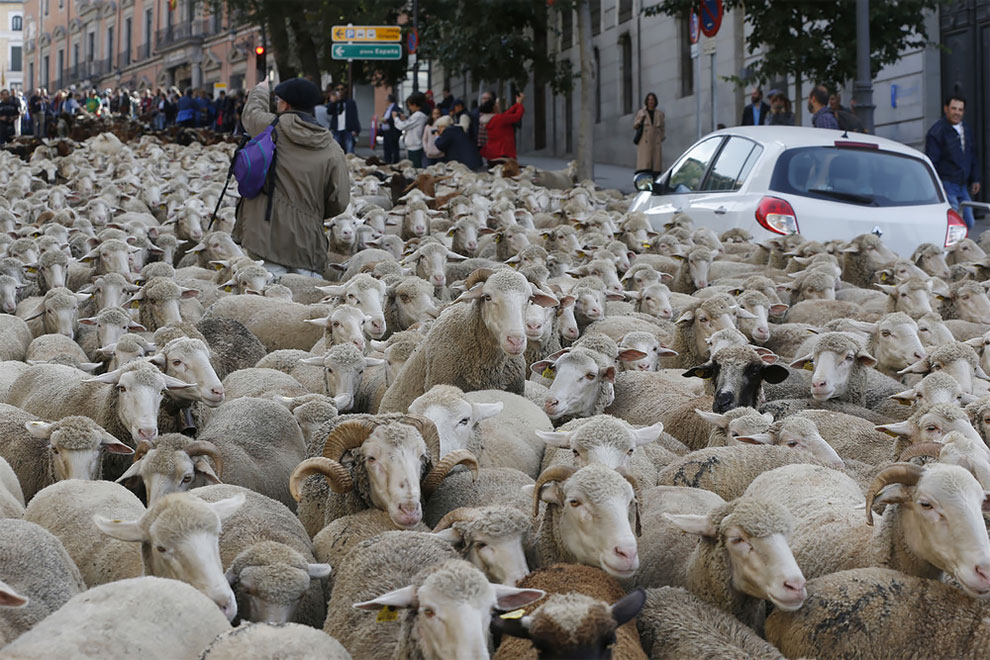 A shepherd tries to guide a flock of sheep that turned around as they were driven through central Madrid, Spain, October 21, 2018. Shepherds guided sheep through the Madrid streets in defence of ancient grazing and migration rights increasingly threatened by urban sprawl and modern agricultural practices. (Photo by Paul White/AP Photo) 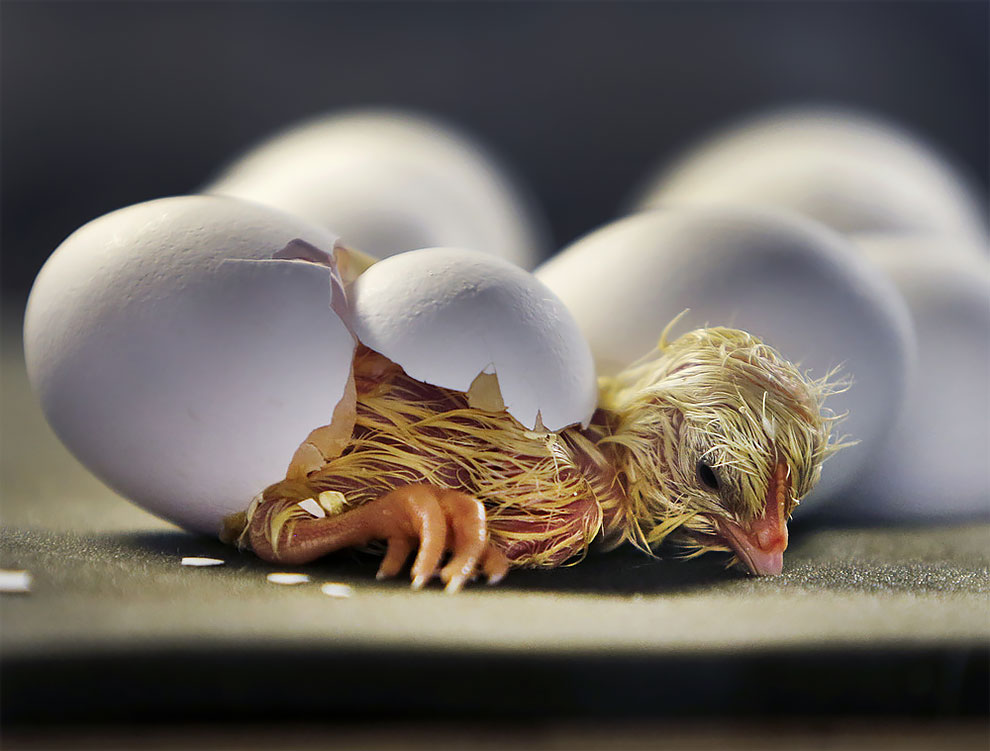 A freshly hatched chick rest after strong efforts to break through the egg in the zoo in Frankfurt, Germany, January 23, 2018. (Photo by Michael Probst/AP Photo) 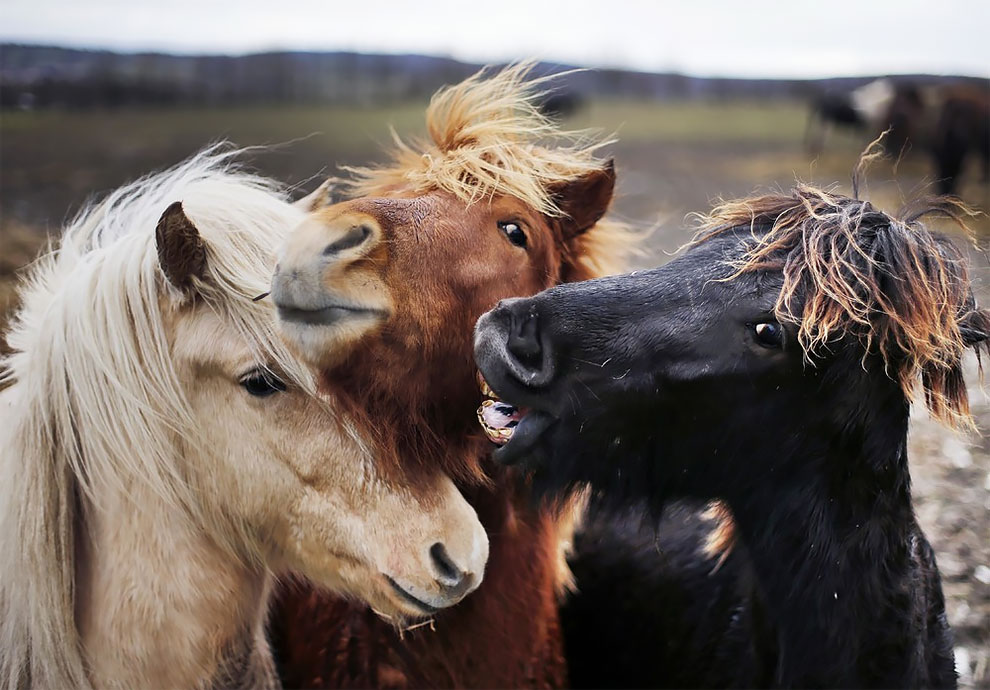 Three Iceland horses stick their heads together in their paddock in Wehrheim, Germany, January 16, 2018. (Photo by Michael Probst/AP Photo) 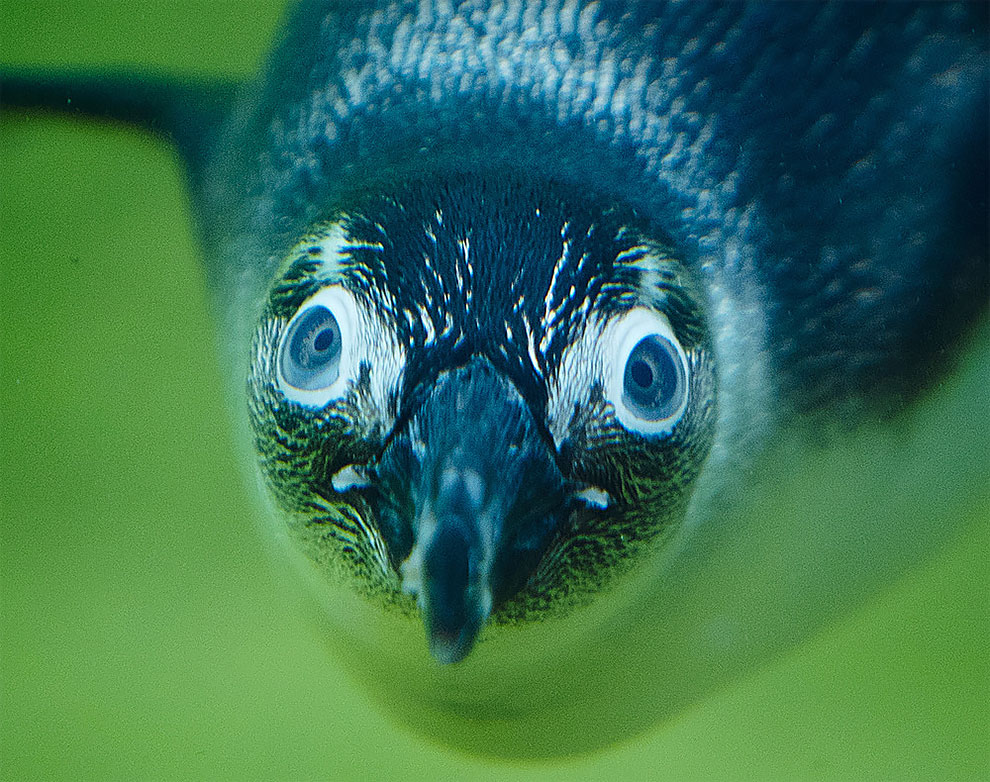 A jackass penguin dives in the zoo in Kronberg near Frankfurt, Germany, August 7, 2018. (Photo by Michael Probst/AP Photo) 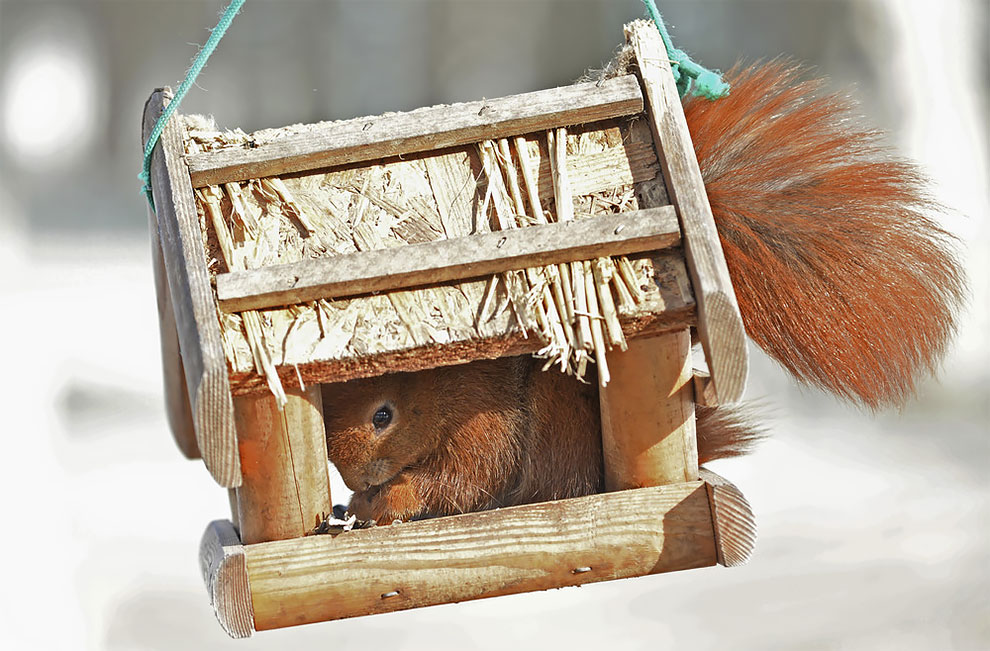 A squirrel eats grains from a bird feeder in Lazienki park on a cold sunny day in Warsaw, Poland, February 28, 2018. An extreme Siberian cold snap sweeping across Europe is claiming lives in Poland and Romania, but also dusted the ancient ruins of Pompeii with snow Tuesday and prompted Amsterdam authorities to prepare the city’s iconic canals for ice-skaters. (Photo by Alik Keplicz/AP Photo) 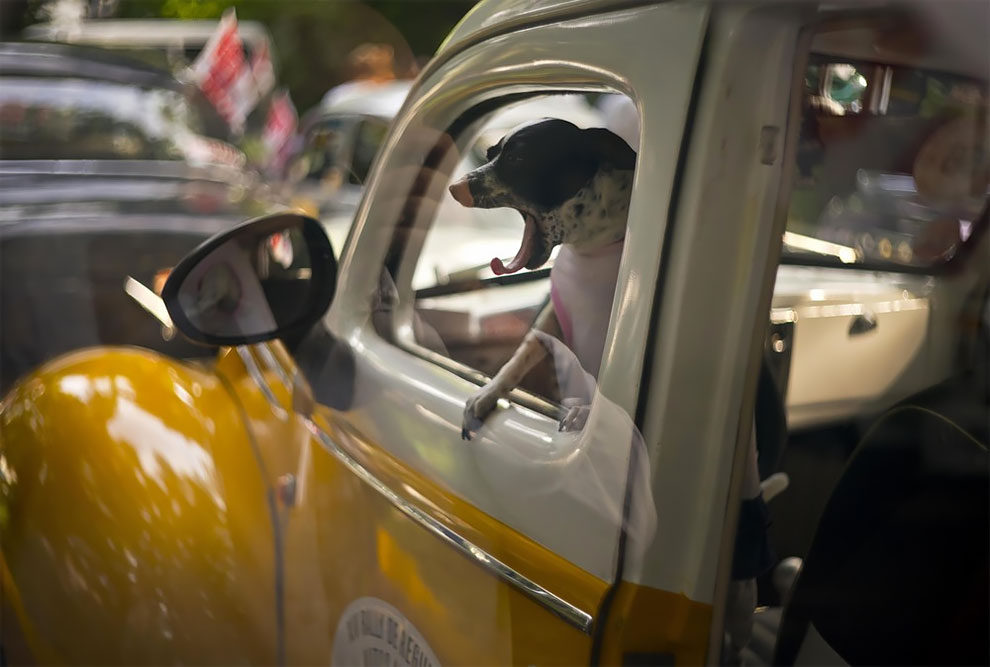 A dog yawns in the cab of a classic 1938 Ford, currently being used as a taxi, as it sits parked before the XIV rally of antique cars in Havana, Cuba, November 4, 2018. (Photo by Ramon Espinosa/AP Photo) 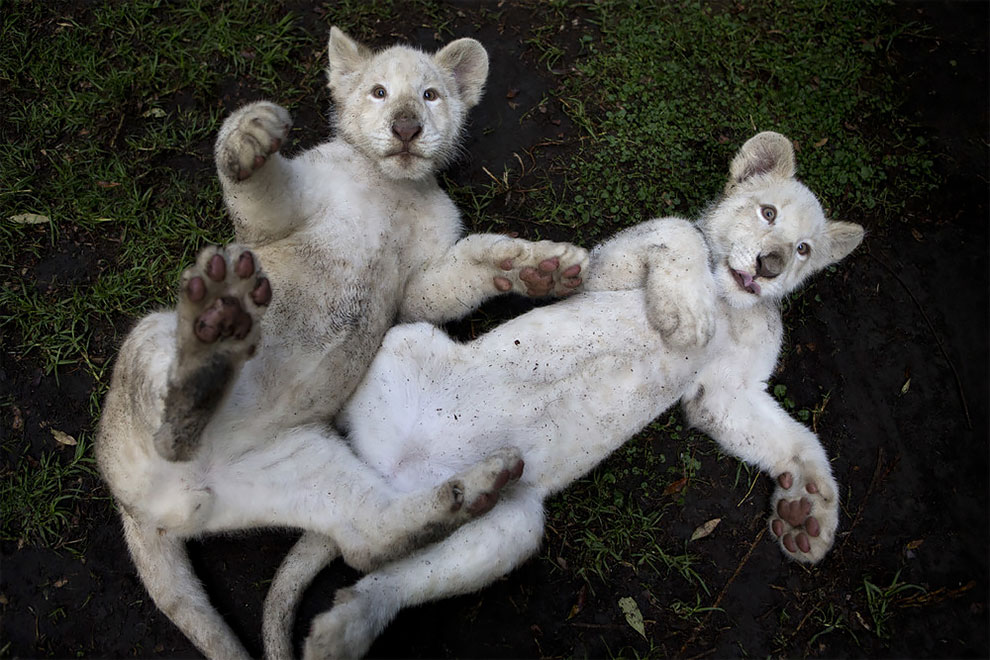 A pair of four-month-old white lion cubs play together in their enclosure at the Altiplano Zoo in Tlaxcala, Mexico, August 7, 2018. Just over a dozen white lions remain in the wild, according to the Global While Lion Protection Trust, based in South Africa, though several hundred are held in zoos around the world, including several in Mexico. They are not albinos, but have coloration that results from a genetic rarity. (Photo by Rebecca Blackwell/AP Photo)

Korean Woman Raises 200 Dogs Saved From Streets
An Artist Brings Animals To Life Using Body Paint And Contorted Models
Animal Architects Bowerbirds Design
Artist Imagines The Secret Life Of Wild Animals When No One‘s Watching
The Surprising Beauty Of Microscopic Insects, Isopods And Crustaceans Illuminated With Polarized Light
That Moment When Your Dog Has So Much Fur That You Can Practice Braiding With His Tail
Japanese Cat Owner Devises Eccentric Feeding Strategy
Unwanted Cat Becomes This Little Boy’s Guardian, Following Him Everywhere
Stunning Winning Panoramic Photography From The 2018 Epson Panoramic Awards
10 Absolute Benefits Of Having A Cat
Photo of the Day: Save Animals Campaign
This Photographer Made Funny Noises At Animals And Captured Their Funny Expressions
Once Upon The War: Introducing The Kharkiv School of Photography
Beautiful Vintage Black And White Fashion Photography By Georges Dambier In The 1950s
2016 Siena International Photography Awards Winners
There’s An Online Community That Makes Fun Of People Trying To Sell Mirrors
These Grey Whale Calves Love Posing For Their Close Ups As They Go Oh-So Close To Tourists
Surreal Photos Of Abandoned Houses In The Arctic By Norwegian Photographer Britt Marie Bye
Dog Surfing Competition
Guardian Readers' Travel Photography Competition: March 2017
The Fascinating Adventures Of A Frenchman And A Hen Sailing Together Around The World
Photographer Tossed Powder On Some Dogs, And The Result Turned Out Amazing
This Dog Can Keep Anything On His Head Without Falling
Photographer Takes Delightful Fat Cat Pictures To Show Chubby Cats Are Adorable
animals, AP, photography, press