Reuters Pictures Of The Year 2018: Animals 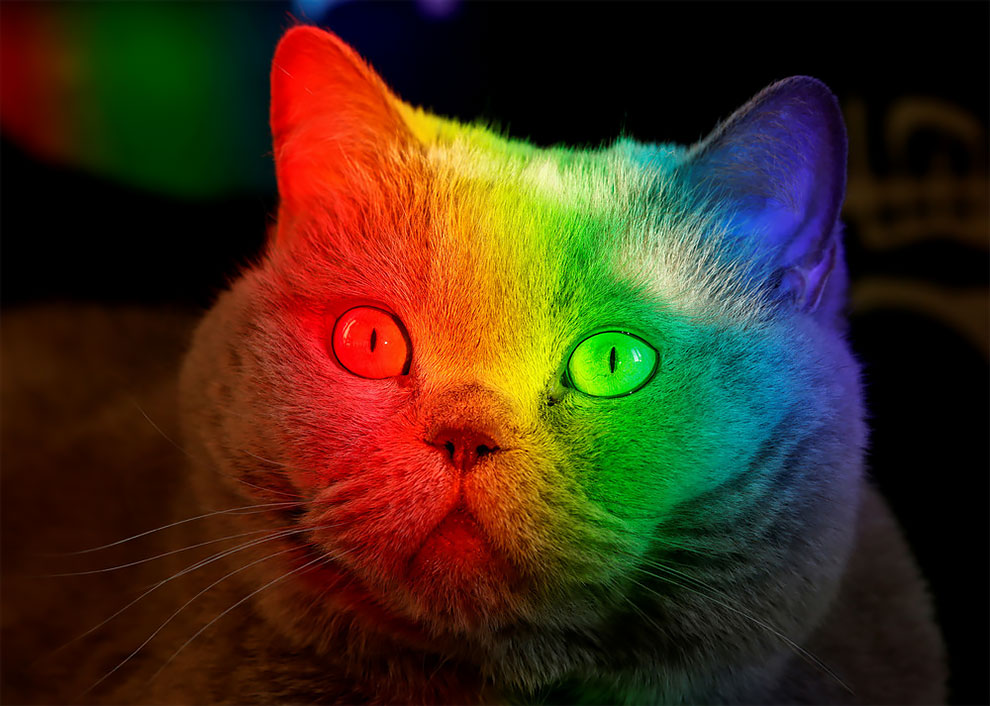 A British Blue cat is lit up by sunlight diffracted through an aquarium at an apartment in the Siberian city of Krasnoyarsk, Russia July 8, 2018. (Photo by Ilya Naymushin/Reuters) 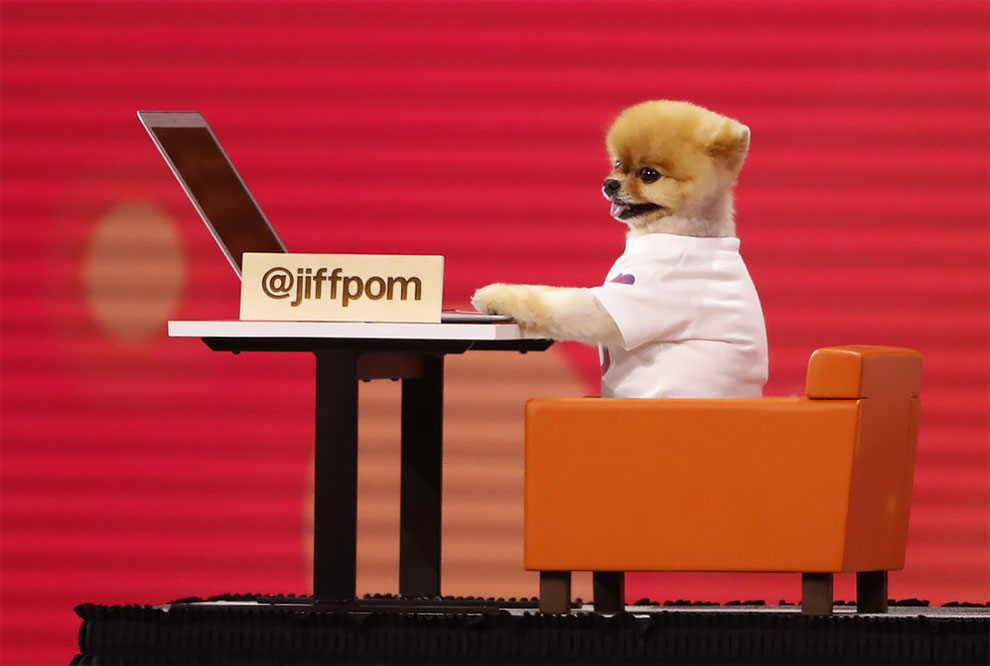 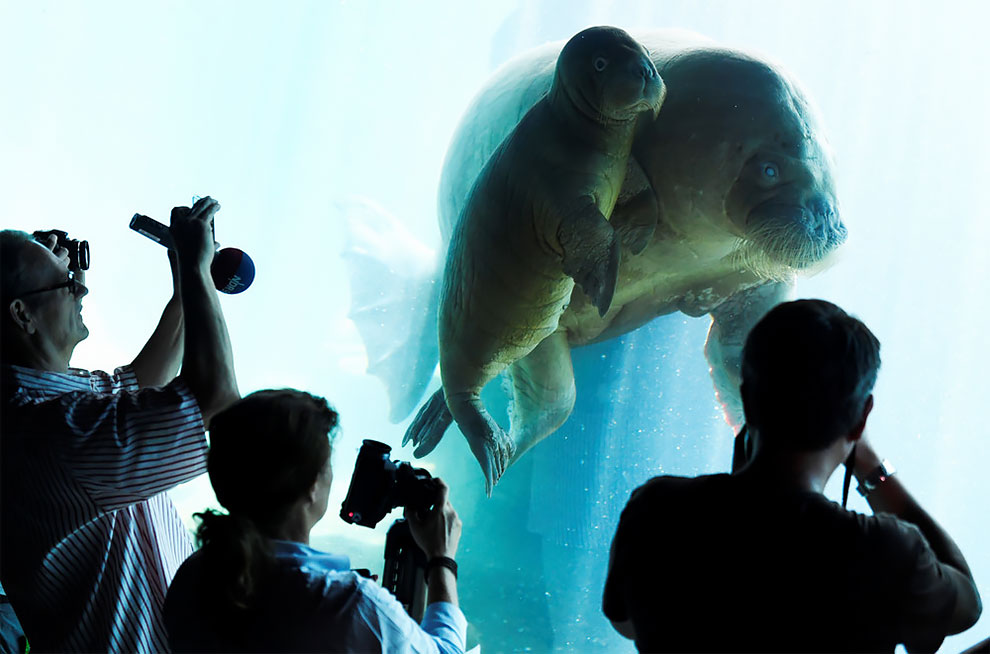 Walrus Dyna and her unnamed calf, born on June 17 in the Hagenbeck Zoo, dive in their compound as they are presented to the public in Hamburg, Germany August 3, 2018. (Photo by Fabian Bimmer/Reuters) 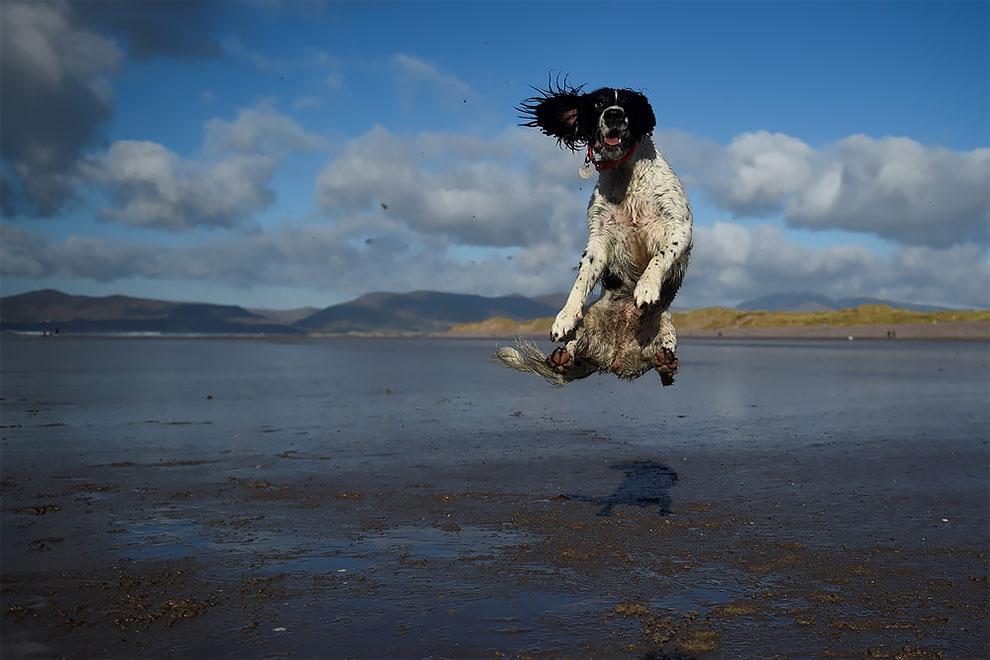 A dog jumps into the air to catch a ball along the beach near the County Kerry village of Rossbeigh, Ireland, February 4, 2018. (Photo by Clodagh Kilcoyne/Reuters) 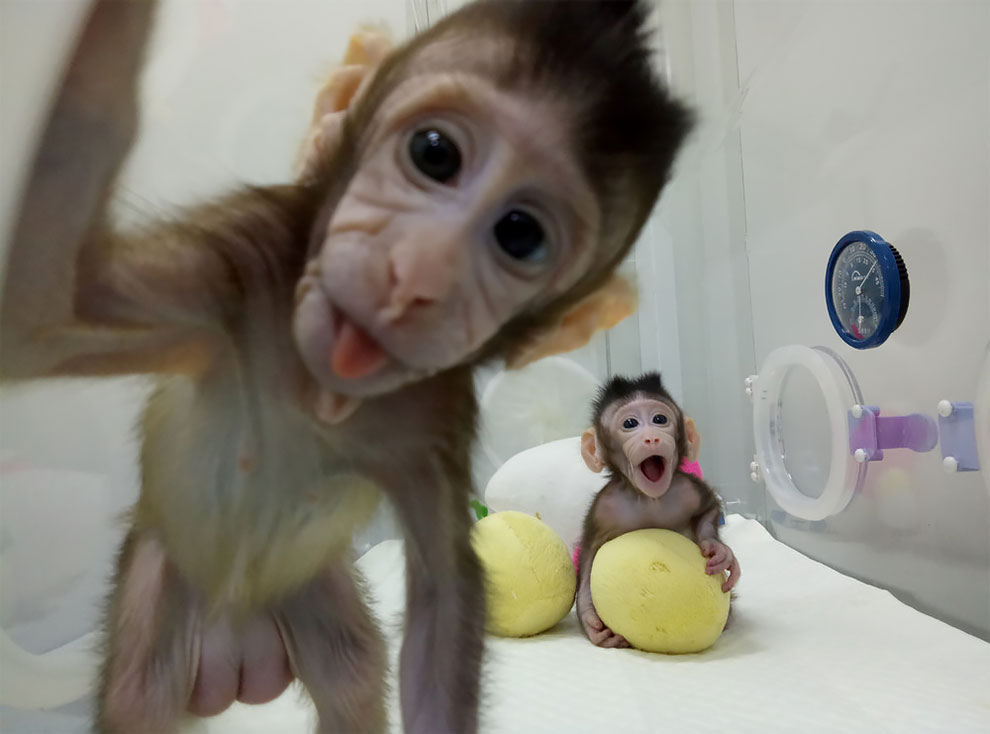 Cloned monkeys Zhong Zhong and Hua Hua are seen at the non-human primate facility at the Chinese Academy of Sciences in Shanghai, China January 20, 2018. (Photo by China Daily via Reuters) 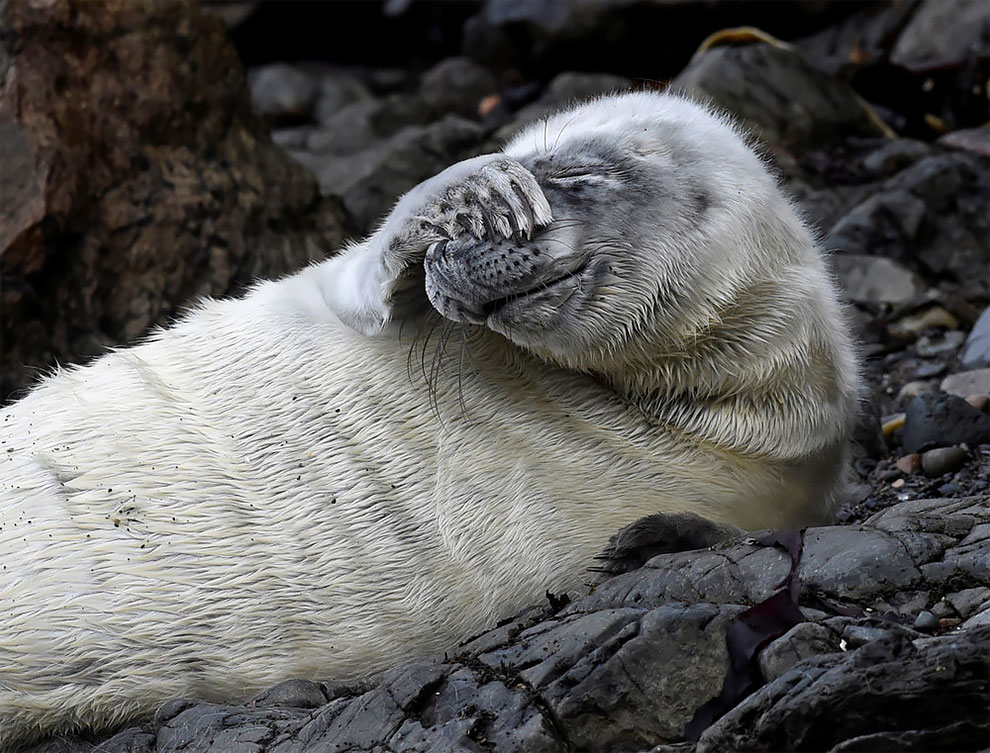 An Atlantic seal pup lies amongst the rocks at St Martin’s Haven, Pembrokeshire, Wales, Britain October 8, 2018. Seal pups are born with fluffy white non-waterproof coats which they moult out in their fourth week. (Photo by Rebecca Naden/Reuters) 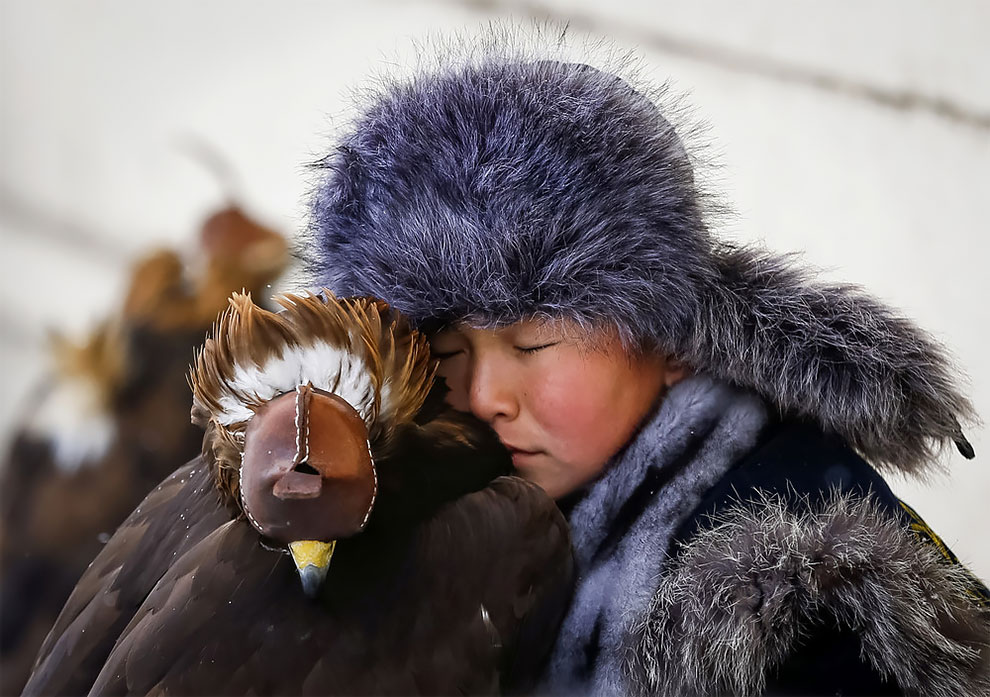 A young hunter rests next to his tamed golden eagle during an annual hunters competition at Almaty hippodrome, Kazakhstan February 9, 2018. (Photo by Shamil Zhumatov/Reuters) 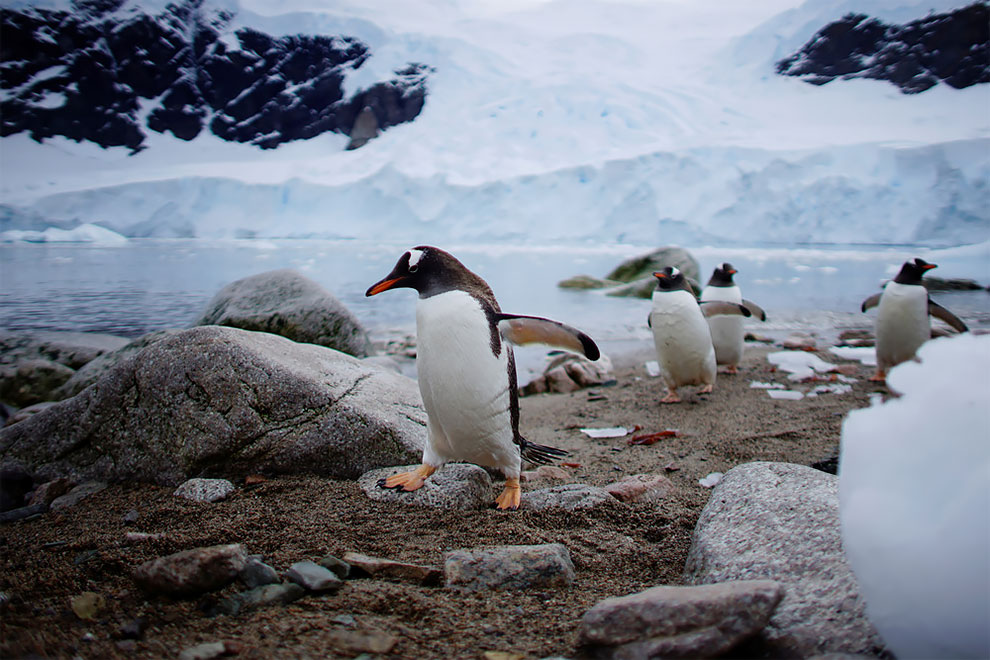 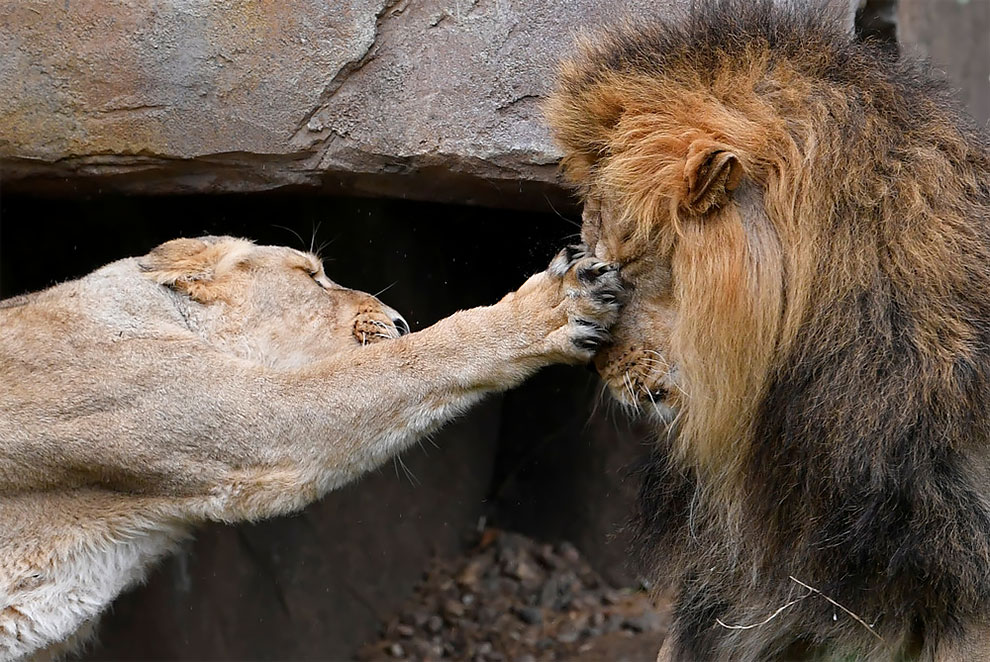 A lioness takes a swipe at Bhanu the Asiatic lion during an event to publicize World Lion Day at London Zoo in London, Britain, August 9, 2018. (Photo by Toby Melville/Reuters) 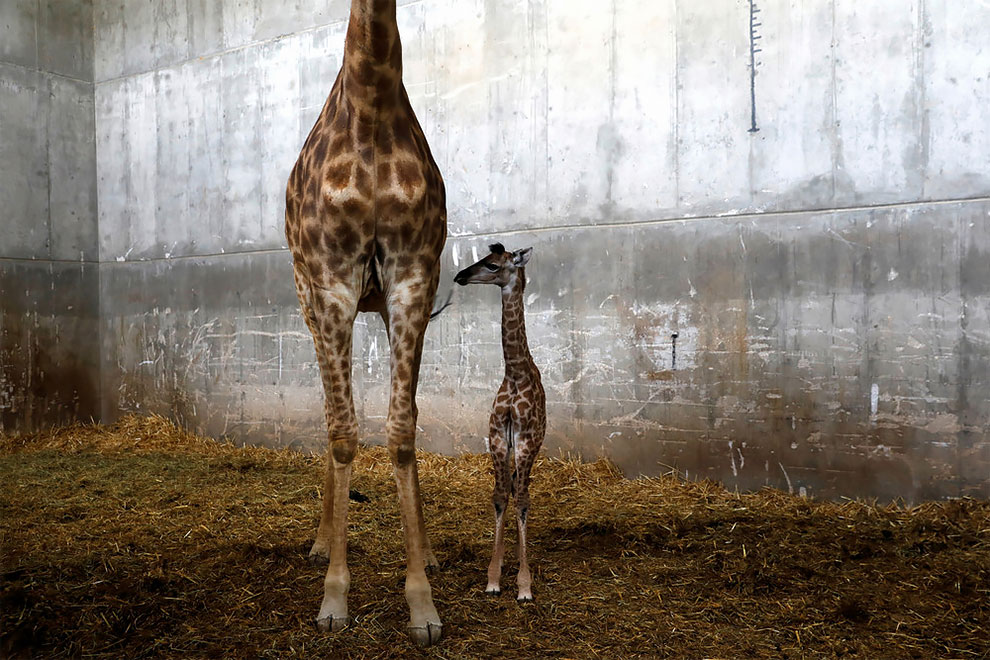 Toy, a 10-day-old female giraffe named after Israeli singer and Eurovision Song Contest winner Netta Barzilai’s song “Toy”, is seen with its mother Laila in their pen at Jerusalem’s Biblical Zoo, May 21, 2018. (Photo by Ronen Zvulun/Reuters) 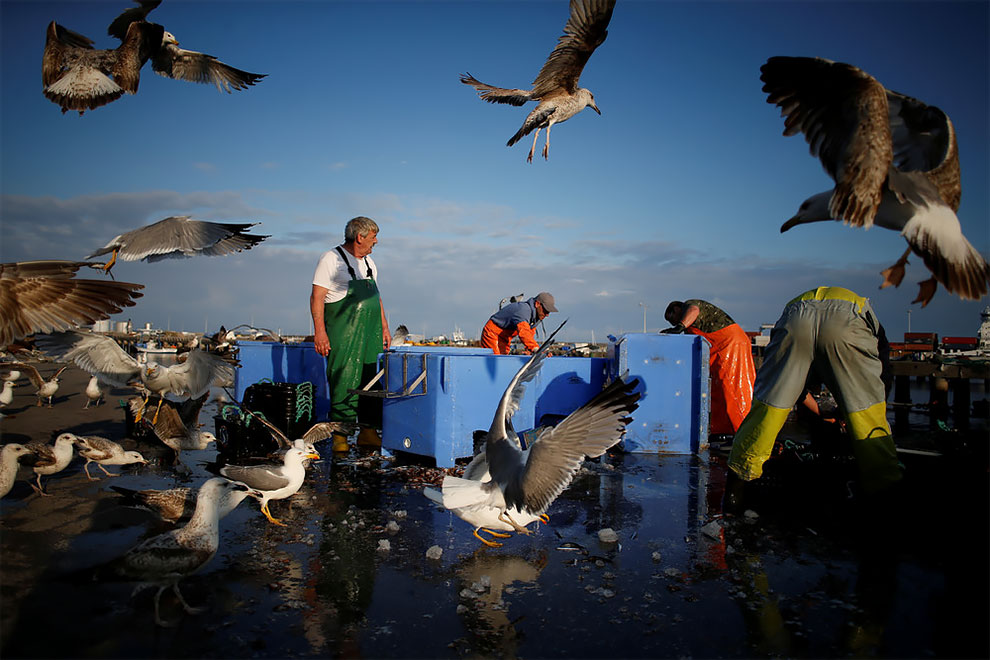 Fishermen are seen at work in the port of Matosinhos, Portugal, May 28, 2018. (Photo by Pedro Nunes/Reuters) 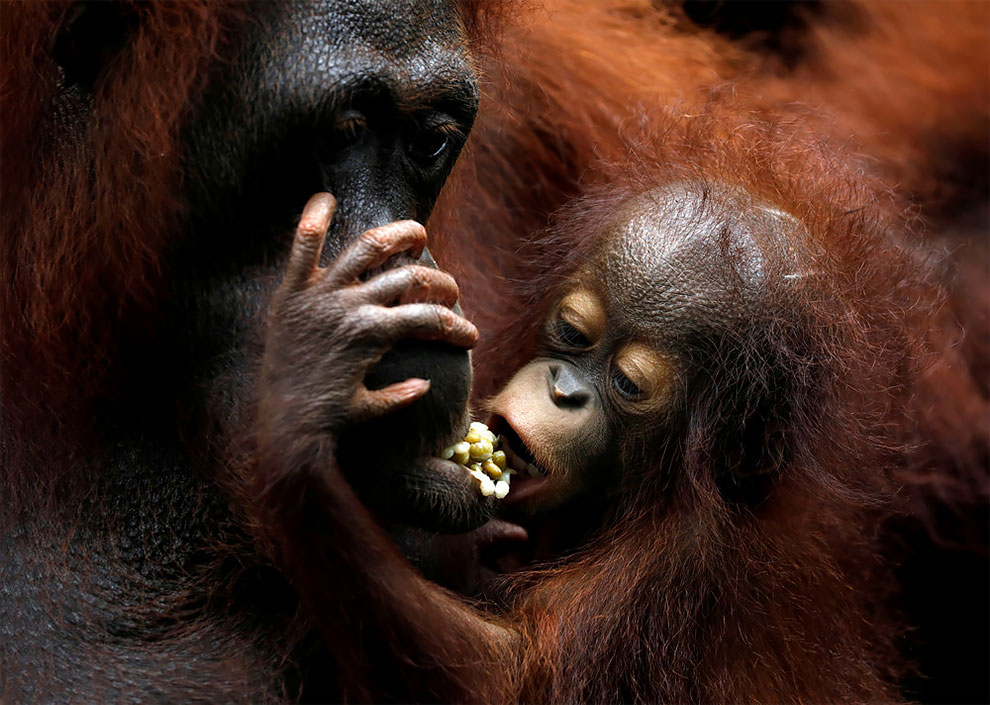 Khansa, the Singapore Zoo’s 46th orangutan baby, clings to its mother Anita during a media tour to showcase newborn animals at the Singapore Zoo January 11, 2018. (Photo by Edgar Su/Reuters) 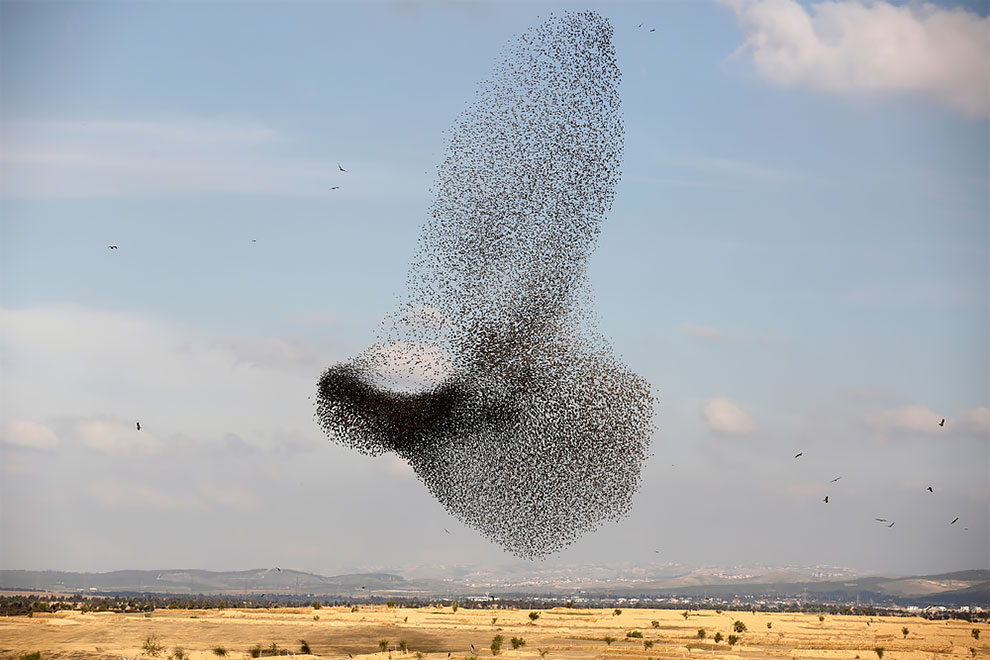 A murmuration of migrating starlings is seen across the sky near the village of Beit Kama in southern Israel January 16, 2018. (Photo by Amir Cohen/Reuters) 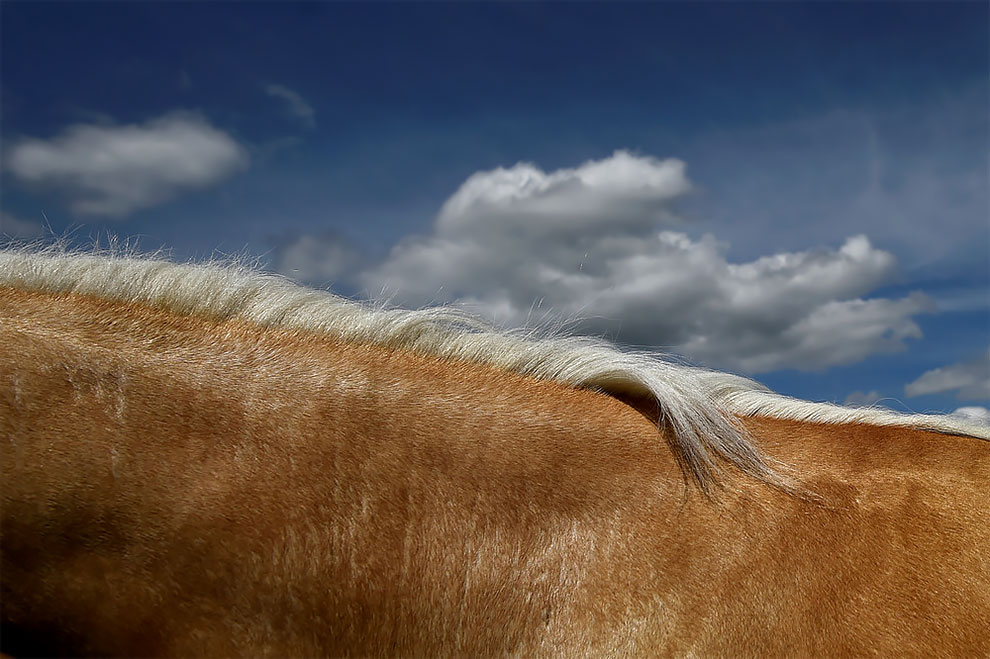 A palomino horse’s mane is seen against the sky at Spancil Hill horse fair in Spancil Hill, Ireland June 23, 2018. (Photo by Clodagh Kilcoyne/Reuters) 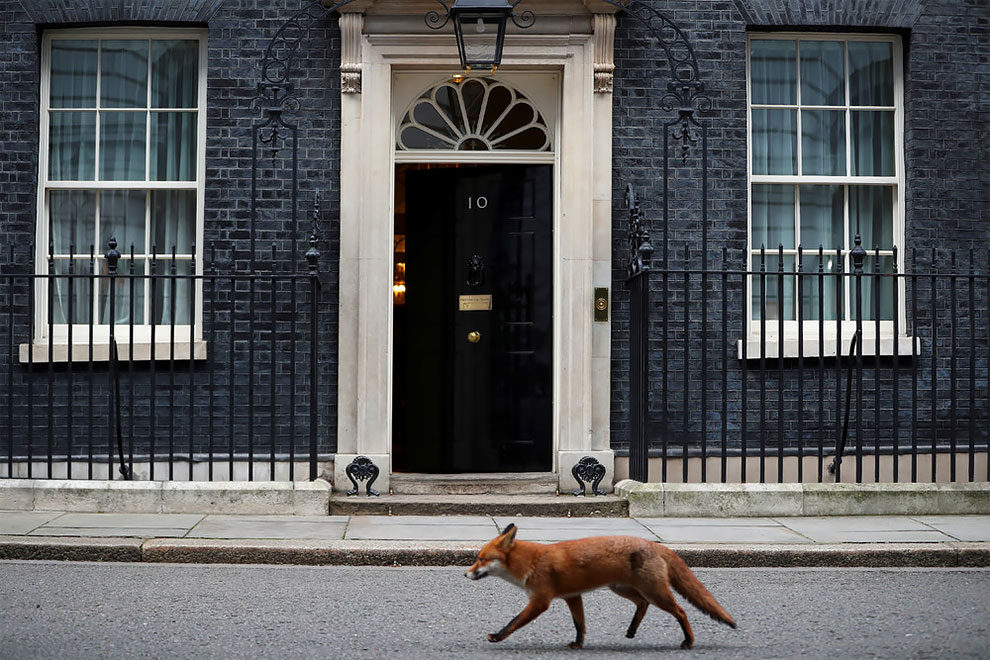 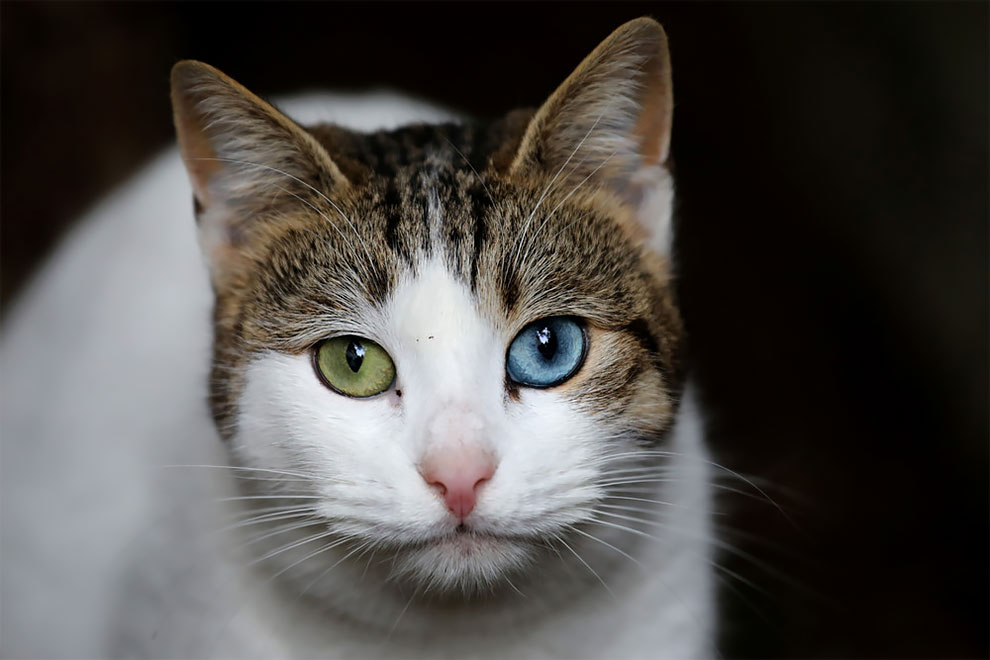 A cat stands after being fed by a local resident in Istanbul, Turkey, January 11, 2018. (Photo by Goran Tomasevic/Reuters) 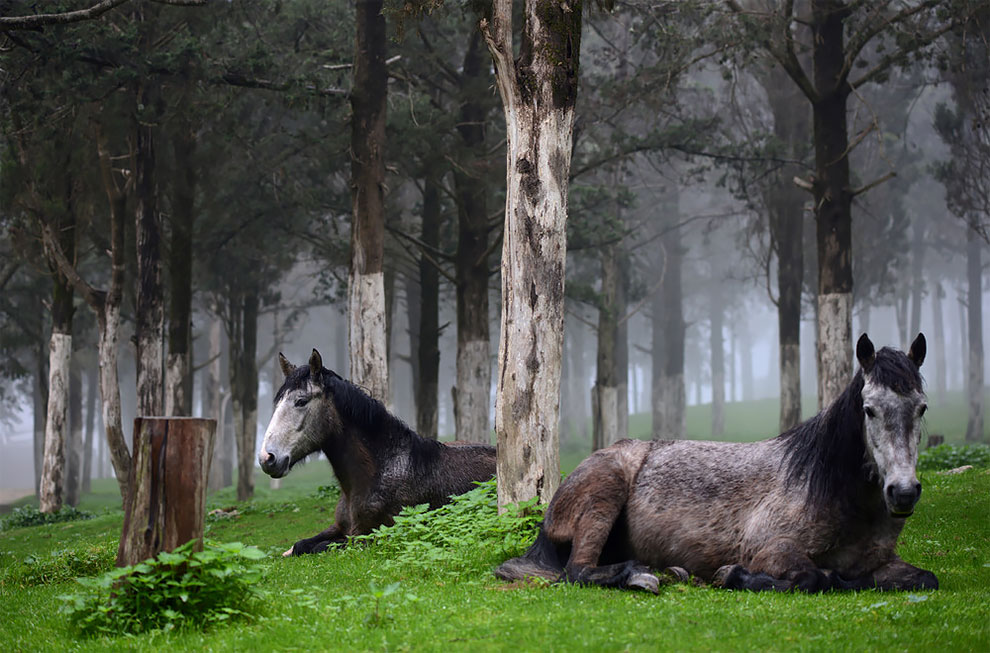 Horses are seen inside a forest near the ruins of the Greek and Roman city in Shahhat, Libya January 5, 2018. (Photo by Esam Omran Al-Fetori/Reuters) 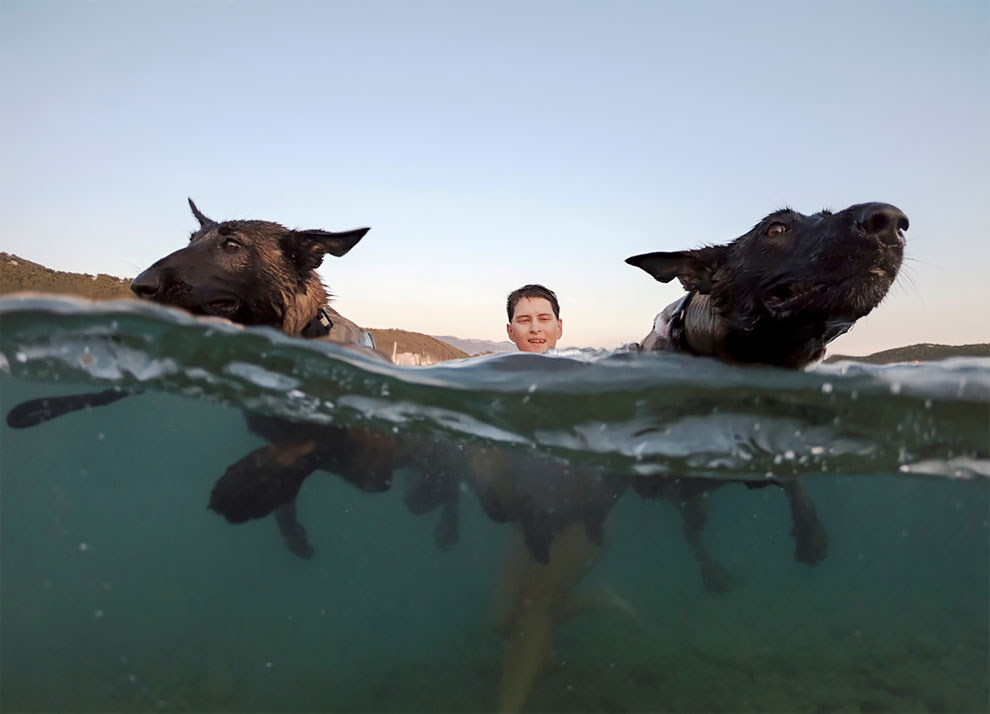 Dogs and their owner take part in the “Underdog 2018” beach race in Banjol, Croatia, August 28, 2018. (Photo by Antonio Bronic/Reuters) 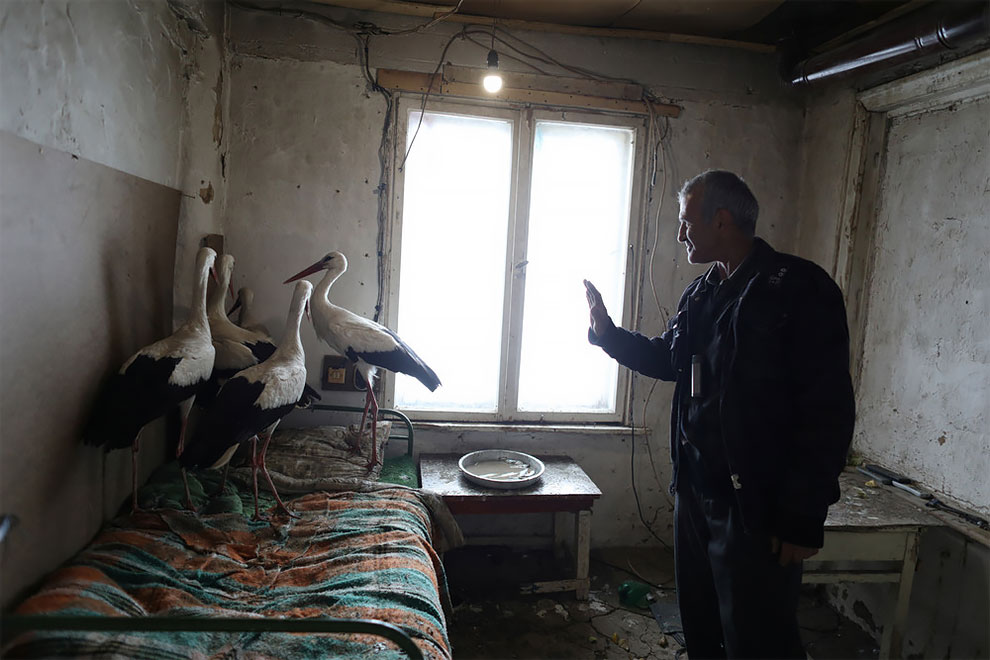 Bulgarian farmer Safet Ismail, 53, reacts next to storks that he saved in the village of Zaritsa, Bulgaria, March 21, 2018. Dozens of people from villages in northeastern Bulgaria brought storks into their houses amid freezing temperatures and snowfalls in the area over the previous few days. (Photo by Stoyan Nenov/Reuters) 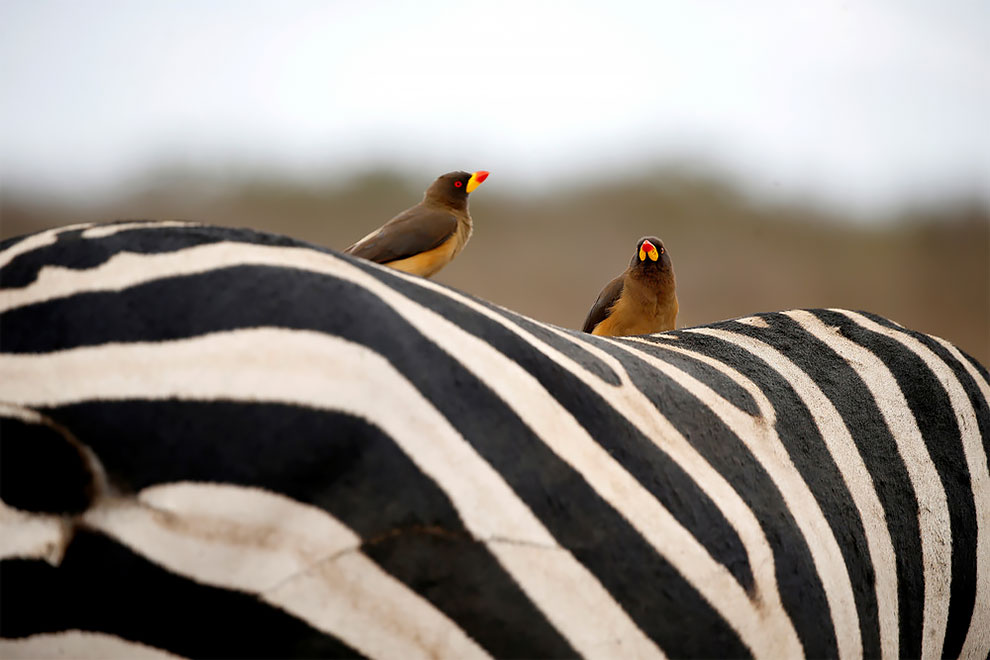 Birds sit on the back of a zebra in Nairobi National Park, near Nairobi, Kenya, November 21, 2018. (Photo by Baz Ratner/Reuters) 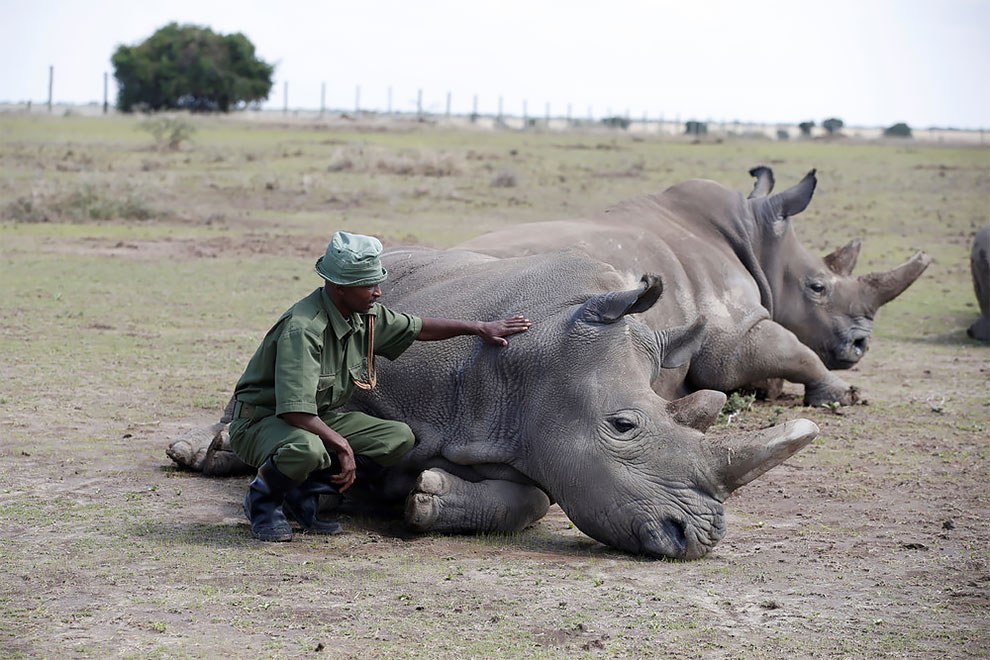 A warden watches over Najin (front) and her daughter Patu, the last two northern white rhino females, in their enclosure at the Ol Pejeta Conservancy in Laikipia National Park, Kenya March 7, 2018. (Photo by Baz Ratner/Reuters) 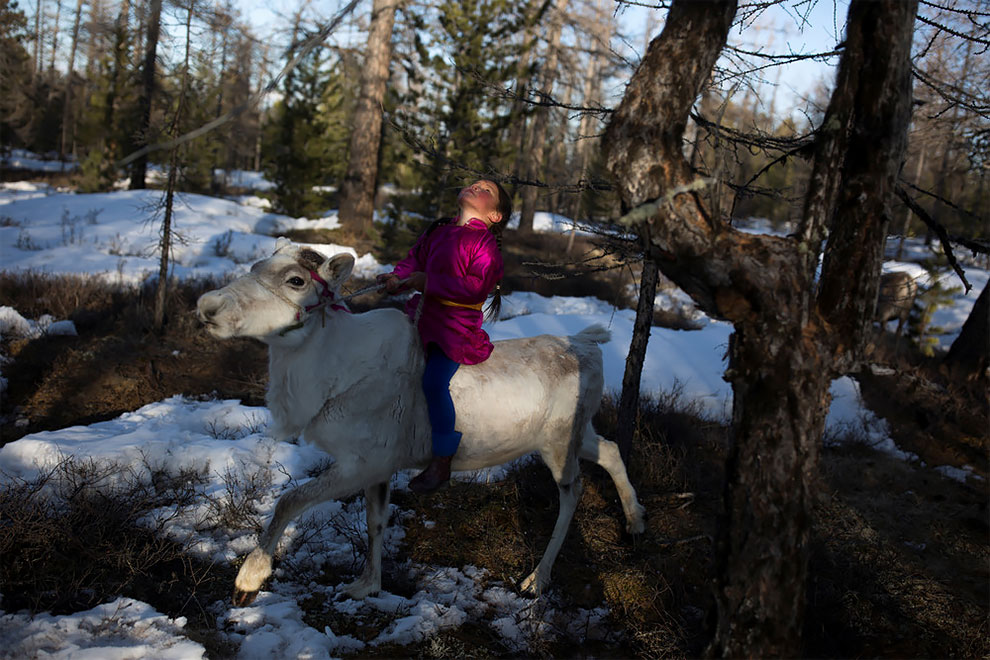 Tsetse, 6-year-old daughter of Dukha herder Erdenebat Chuluu, rides a reindeer in a forest near the village of Tsagaannuur, Khovsgol aimag, Mongolia, April 21, 2018. Tsetse spends many hours every day darting through the forest on reindeer back. Because of their lighter bodyweight, children train young reindeer to get them used to carrying a rider and responding to a combination of vocal commands, prodding, heel-kicking and pulling the leash. (Photo by Thomas Peter/Reuters) 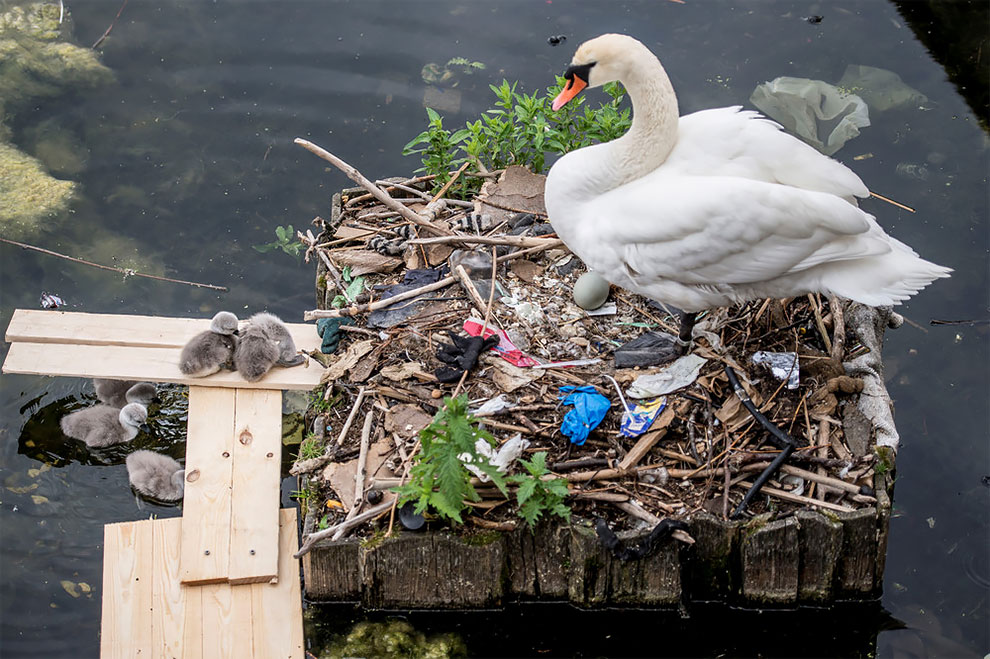 A swan and its cygnets are seen in a nest made partly of rubbish from the lake near Queen Louise’s Bridge in Copenhagen, Denmark May 28 2018. (Photo by Mads Claus Rasmussen/Ritzau Scanpix via Reuters) 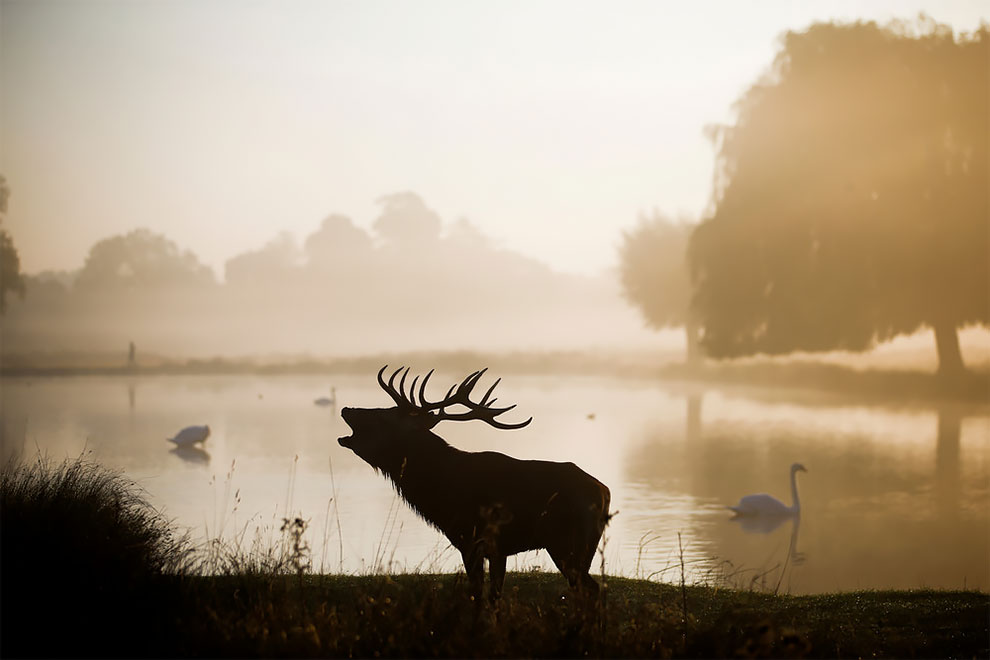 A red deer stands in the early morning mist in Bushy Park in London, Britain, October 10, 2018. (Photo by Henry Nicholls/Reuters)

Babushka Cats That Look Like Old Russian Ladies
Siberian Tiger Cubs at Zoo
Is This The Greatest Account On Instagram?
Wonderfully Interpretive Paper Collages Depicting Popular Cats And Dogs Of Instagram
This Japanese Company Found The Most "Prefurrable" Way To Improve Productivity
This Cat Looks Like A Pirate, But That Just Makes His Mom Love Him Even More!
The Japanese Cat with Over 100 Cosplay Costumes
Vivid Sydney: Festival Of Lights In the Heart Of Australia
Humorous Instagram Account Doodles Adorable Tiny Pug Into Cute Characters
Deer Enjoy Cherry Blossoms In An Empty Park In Nara, Japan
Rita Kluge's Distinctive Photos Capture The Humpback Whale Calving Season In The South Pacific
People Are Building Dog Libraries, And It’s Adorable
Japanese Photographer Captures Very Sad Stray Cats And Their Games
Now In Oregon You Can Have Llamas Dressed As A Bride And Groom Attend Your Wedding
“Kis-Kis” Cat Cafe in the Heart of Siberia
Bioluminescent Sea Fireflies Glittering Like Diamonds On The Rocks And Sand
2019 Social Justice Kittens Calendar Is Here!
Entries of the Scottish Seabird Centre's Nature Photography Awards
A Photographic Project On The Beauty And Connections Between Animals And Humans
Meet Lil Bub
This Artist Makes Funny And Creepy Cat Hybrids Bred In Photoshop. Have Things Gone Too Far?
Matchbox Art Of Drunk Cats
These Portraits Reveal The Incredibly Humanlike Expressions Of A Variety Of Apes
Tiger Cubs Take Swimming Test at Smithsonian National Zoo
Tortoise Art by Katie Bradley
2020 Social Justice Kittens Calendar Is Here!
Artist Duo Have Created A Unique Set Of Images From The Underside Of Dogs
A Humorous Collection Of Photos Of Funny And Adorable Cats As They Play With Catnip By Andrew Marttila
This Couple Took An Amazing Newborn Photoshoot… With Their Dog
Barking Mad Dog Groomer Transforms Pampered Pets Using Crazy Dye Designs
animals, photography, reuters