Stunning Entries of The 2021 Perpignan’s Festival of Photojournalism

The 33rd Visa pour l’image photojournalism festival is taking place this year in Perpignan in the south of France despite notable absences linked to the Covid crisis and world conflicts.

The organisers of the international festival which opens on Saturday 28 August and will run until 26 September, are announcing a total of 25 photo exhibitions spread around the city centre of Perpignan, as well as screenings.

A Covid health pass will be required to see the exhibitions and the screenings will be held every evening at the Campo Santo and the municipal theatre with a limited capacity, but also on the Internet.

There will be no American or British exhibitors at this 2021 edition. 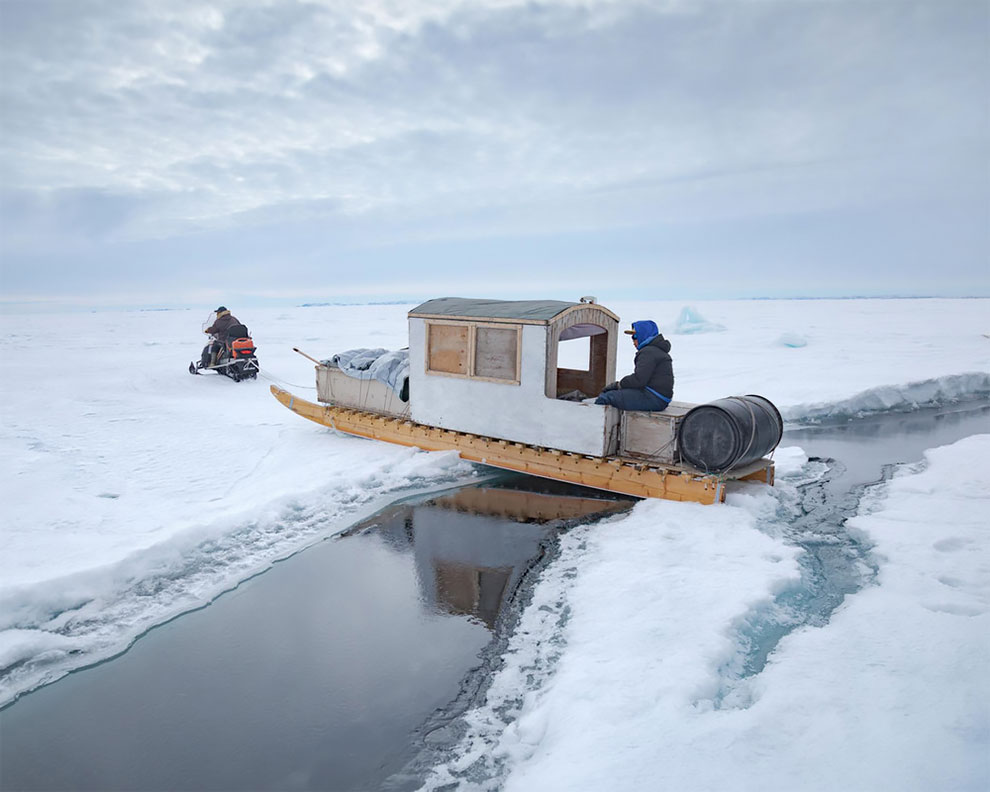 “Sea Ice Stories”. Inuit subsistence hunting traditions in the north of Baffin Island, Canada. In a time of rapid climate and cultural change, family camping trips to ancestral hunting grounds are an important way for the young people of Nunavut to remain connected with the land and their culture, and to learn skills and values from their elders that will prepare them to be leaders and providers in their communities. (Photo by Acacia Johnson/Visa pour l’Image) 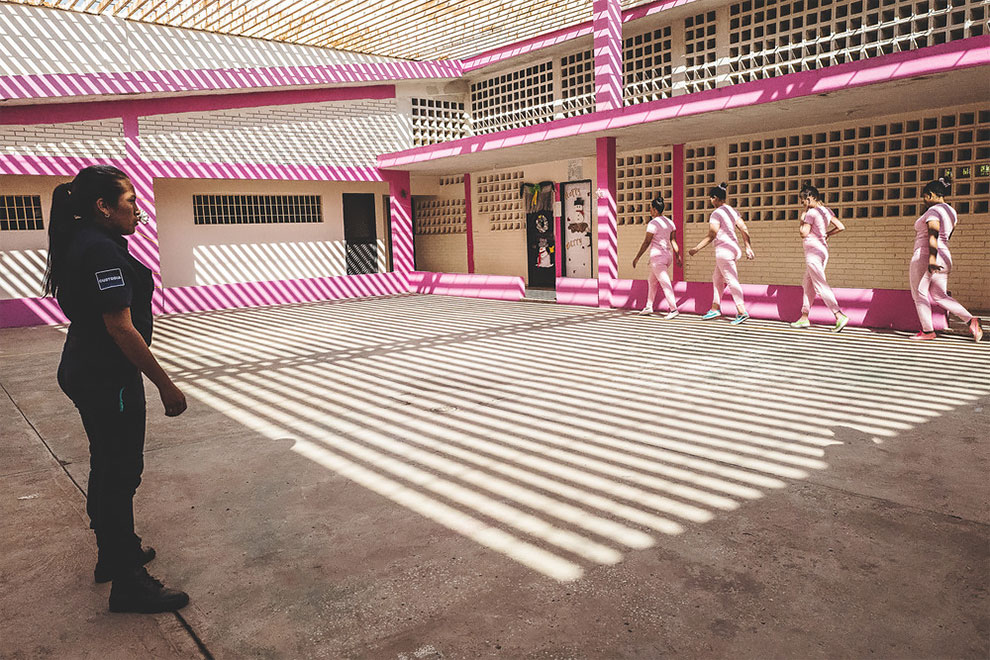 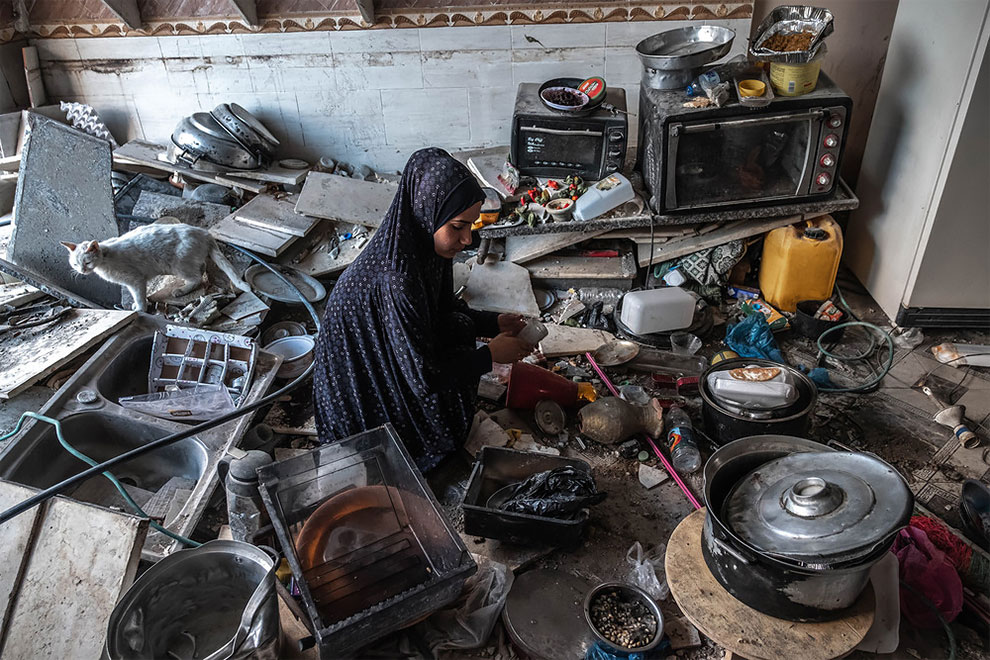 “A Life Under Siege”. “The 2021 Gaza War was the was the first war I covered for so long; it was 11 days non-stop. I realised just how important the camera is, how it can convey details of the city where 2 million people have been living in an open-air prison since the blockade of Gaza was imposed in 2006”. (Photo by Fatima Shbair/Visa pour l’Image) 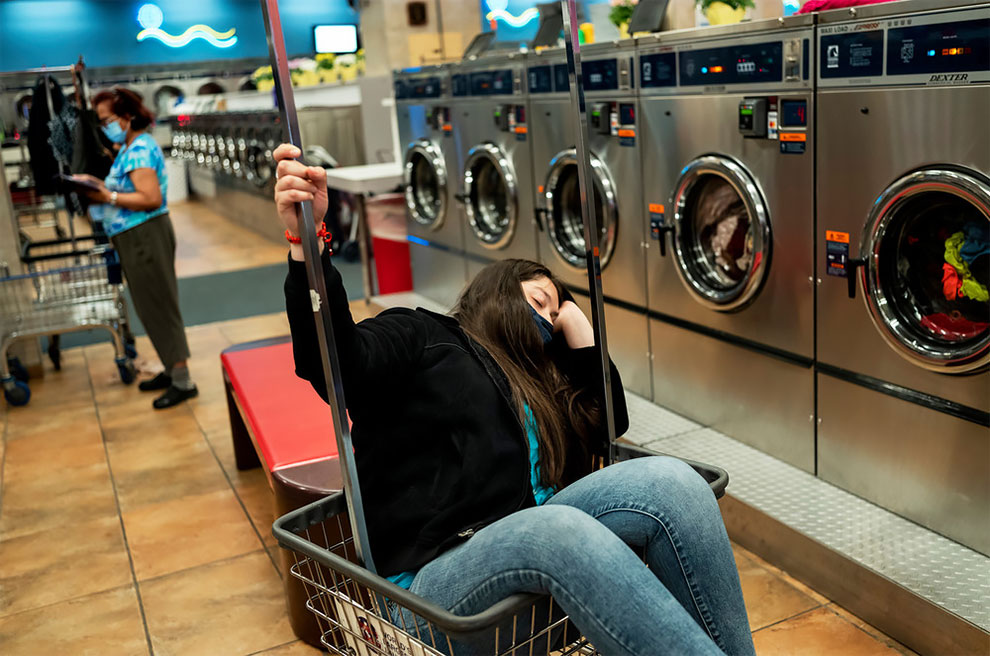 “American Cycles”. The world’s largest laundromat is hard to miss with hundreds of washers and dryers spread over 1,300 square metres. The laundromat is open 24 hours a day, 7 days a week, and runs on solar energy with rooftop panels as wash cycles spin endlessly in this peaceful haven between work and home in a working-class, largely Hispanic suburb of Chicago. (Photo by Darcy Padilla/Agence VU French Ministry of Culture production grant for female photojournalists/Visa pour l’Image) 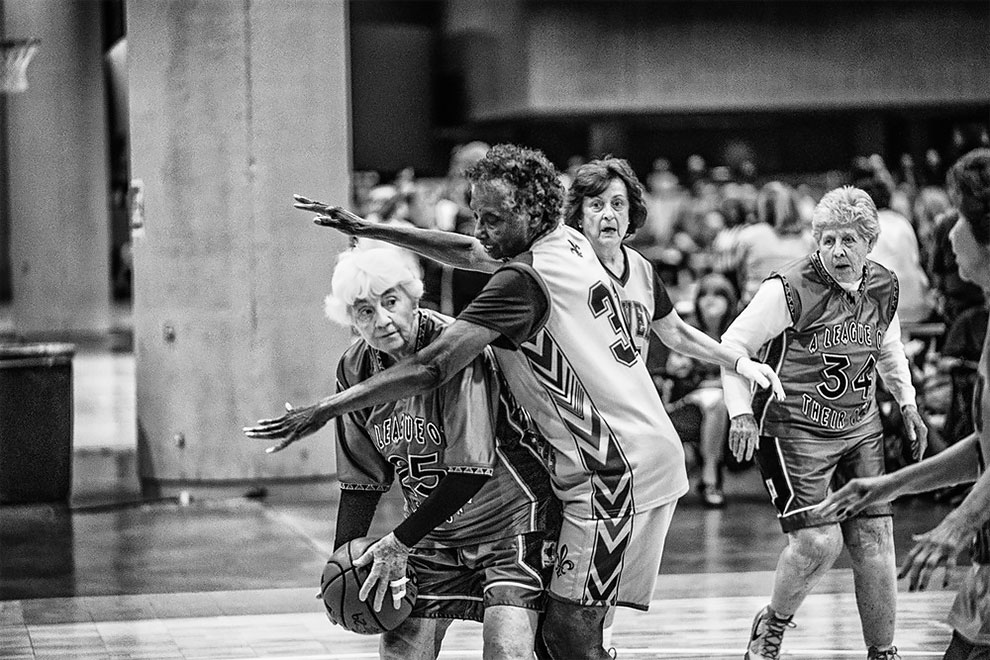 “Who are you calling old”? “In the United States, I discovered sports competitions for seniors, both men and women, with determined amateurs, some who started competing after they retired, and former athletes too old to enter major events. From the age of 55 to 90+, they all have the same spirit of solidarity and the same ambition to stand up to the march of time”. National Senior Games basketball competition: The Silver Slammers vs A League of Their Own. Birmingham, Alabama, June 2017.At the Maison de la catalanité 28 August to 26 September. (Photo by David Burnett/Contact Press Images/Visa pour l’Image) 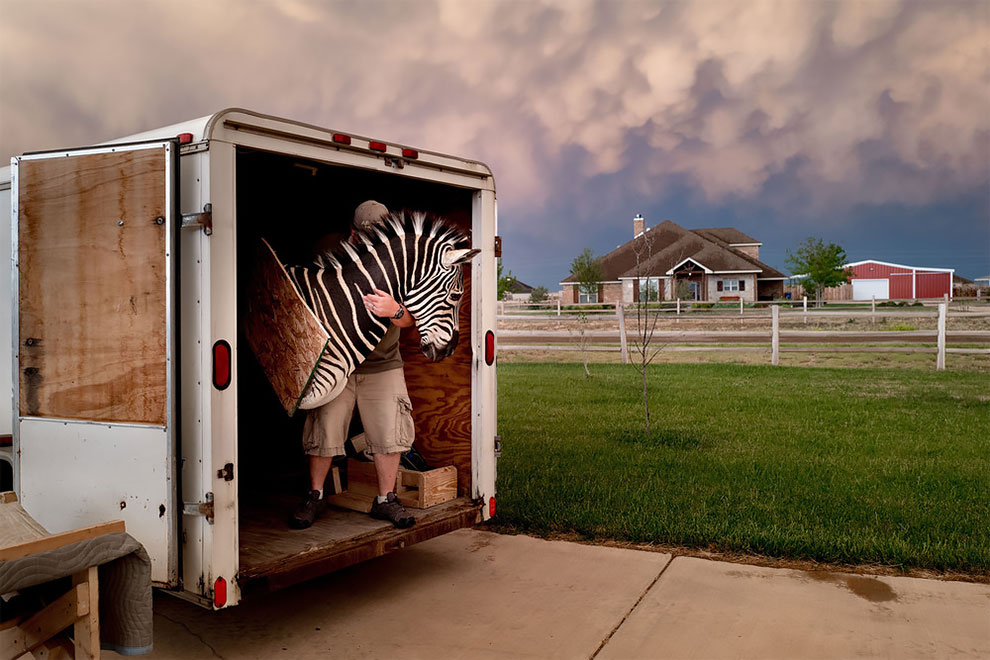 “Sugar Moon”. Wenger has spent years documenting trophy hunting and its role in wildlife conservation in Africa, and wanted to embark on a new chapter devoted to the exotic animal business in the US. Her work on hunter Erik Grimland aims to understand the complex world where tradition, consumerism and the male of the species coincide. Grimland, returning from a family safari in South Africa, unloads trophies at his suburban home, Texas, May 2018. (Photo by Mélanie Wenger/Visa pour l’Image) 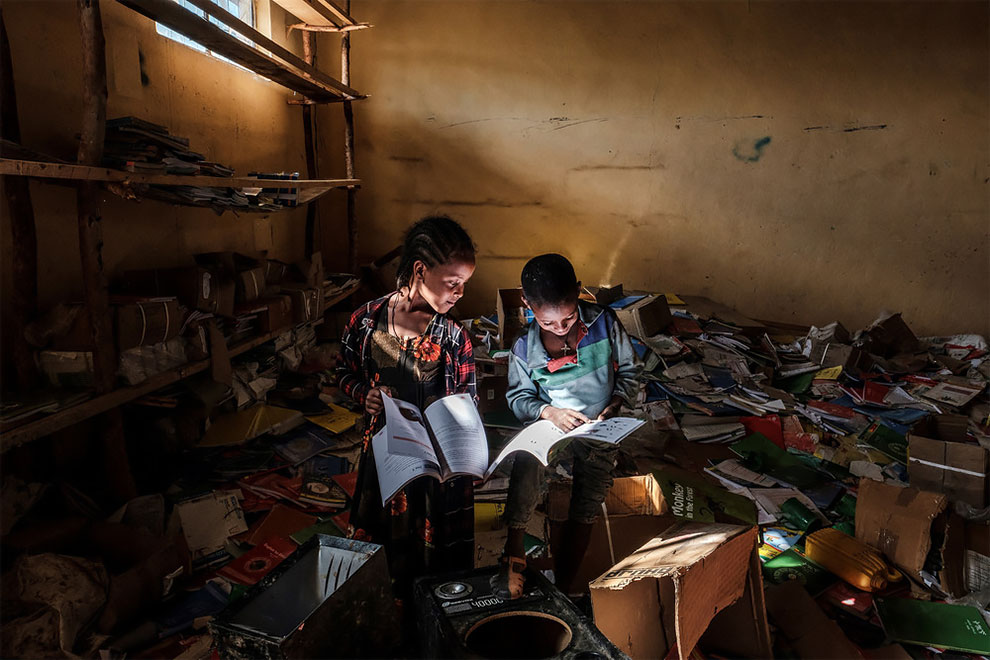 “Tigray: Ethiopia’s Cascade into Chaos”. Soteras’s images showed the world what was happening in Tigray, contradicting the government’s argument that the conflict would be relatively minor. Evidence of civilian suffering was everywhere.In the library of a primary school, damaged during fighting in the Tigray region. According to locals, Tigrayan troops moved into the school after it had been closed because of the pandemic, and months before the conflict began. Bisober, Ethiopia, December 2020. (Photo by Eduardo Soteras/Visa pour l’Image) 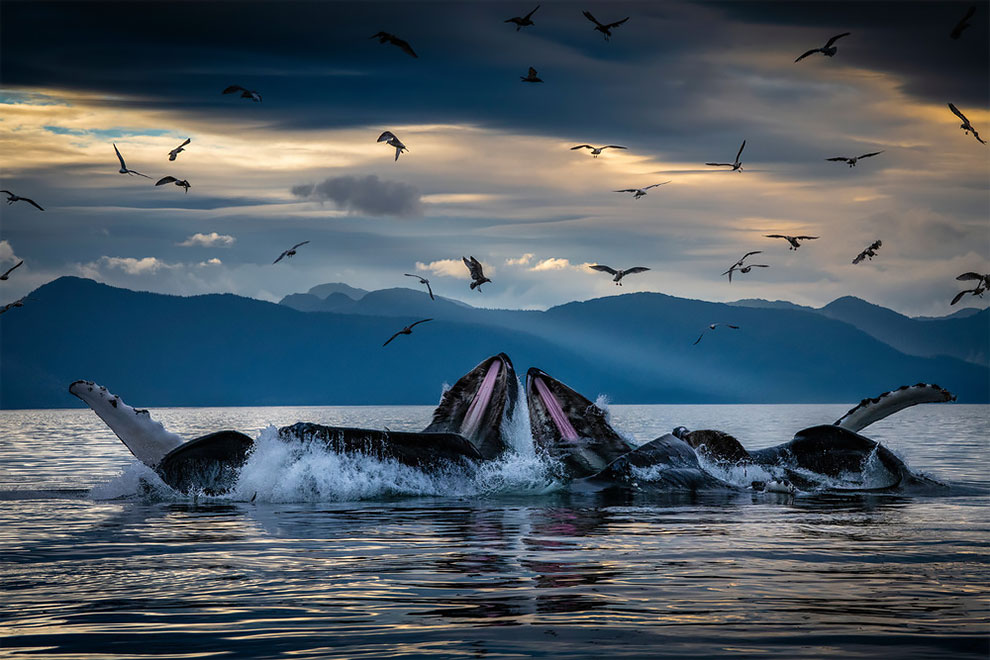 “Secrets of the Whales”. Skerry’s photographs celebrate the lives and culture of whales, illuminating recent research and their diverse behaviours. His latest work focuses on four key species: sperm whales, humpbacks, orca and beluga whales. Humpback whales bubble-net feeding off the coast of Alaska. They work cooperatively to feed on herring by blowing a perfect ring of bubbles underwater to form a net encircling the fish. The whales then swim up through the centre of the bubble net with their mouths open. (Photo by Brian Skerry/National Geographic Photo/Visa pour l’Image) 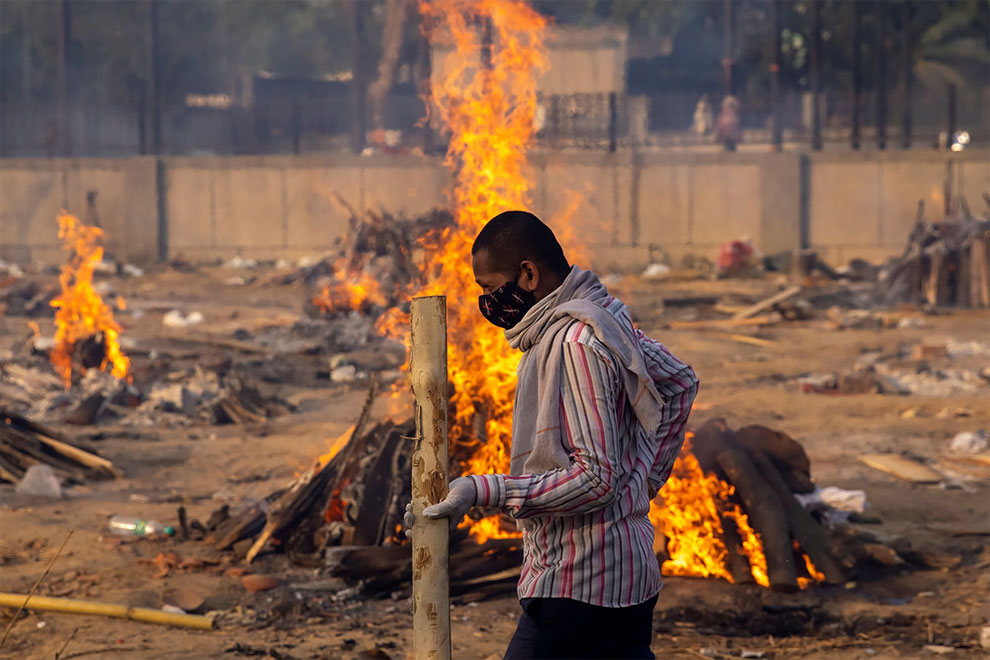 “Documenting India’s Greatest Healthcare Crisis”. For the late Reuters photographer Danish Siddiqui, covering India’s second wave of the coronavirus pandemic in New Delhi was a daily circuit of crematoriums, cemeteries and hospitals, capturing the struggles of a nation of 1.4 billion people. A man walks past burning funeral pyres of people who died due to Covid-19 at a crematorium in New Delhi, April, 2021. (Photo by Danish Siddiqui/Visa pour l’Image) 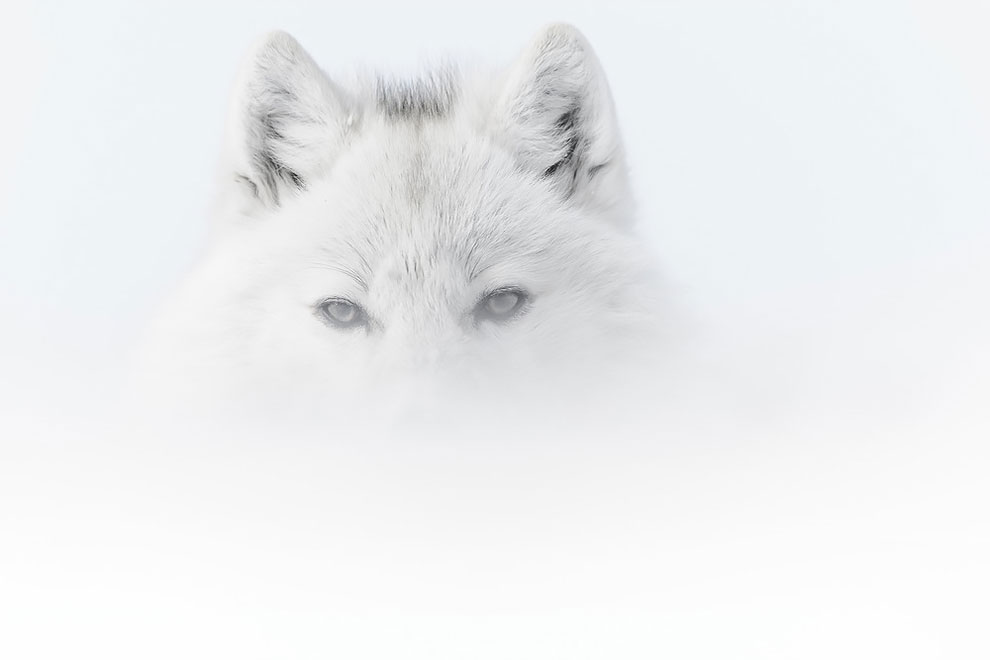 “Retrospective”. Munier’s photography invites visitors to embark on a poetic journey through nature. A range of wildlife from the smallest ant and a modest sparrow to large deer and a polar bear, and this arctic wolf in the fog, on Ellesmere Island, Nunavut, Canada. (Photo by Vincent Munier/Visa pour l’Image) 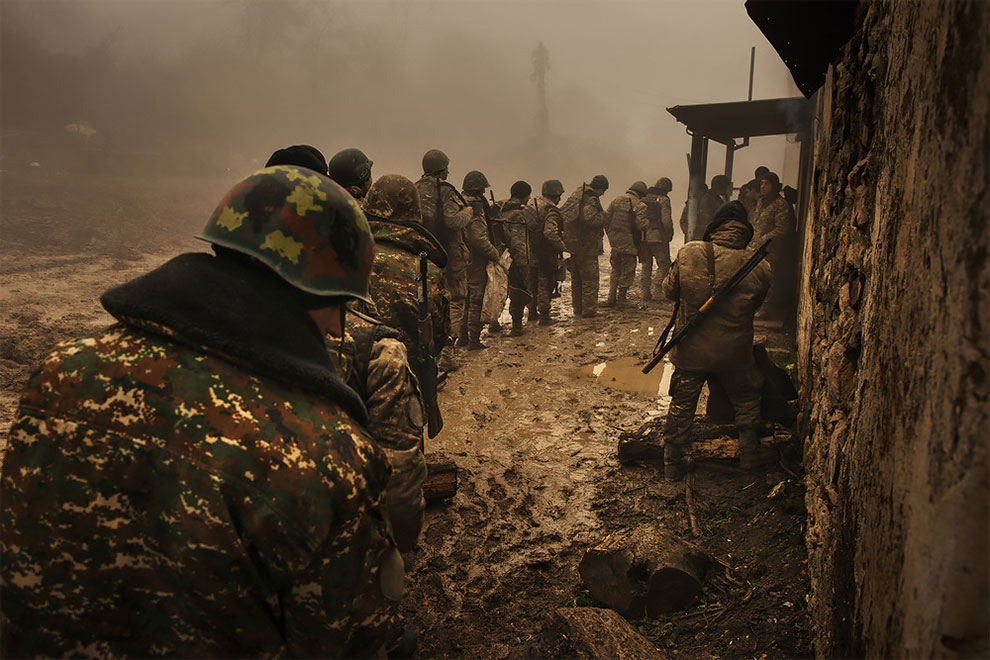 “Armenians – Endangered People”. “I was born in France, but 30 years ago, in a quest for enlightenment, I embarked on a venture to produce a visual rendition of the stories handed down by my grandparents who had escaped the 1915 genocide of the Armenian people”. After a ceasefire, Armenian forces withdraw from their positions. Under the agreement, Russian peacekeeping forces will be deployed for five years, Martuni Province, Nagorno-Karabakh. (Photo by Antoine Agoudjian for Le Figaro Magazine/Visa pour l’Image) 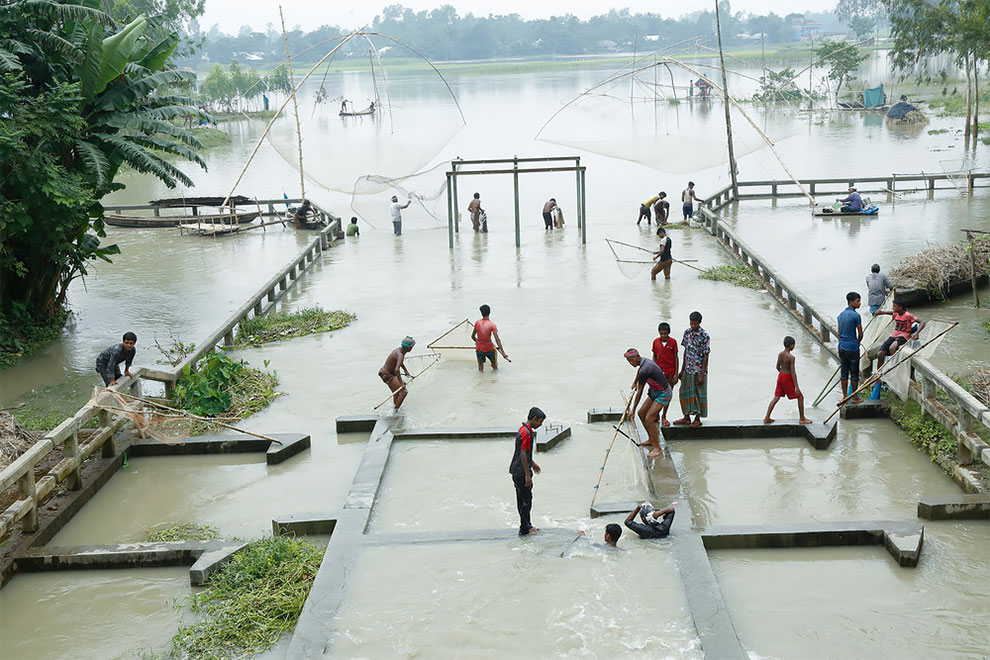 “Climate Migrants in Bangladesh”. Nature has never made it easy to live in Bangladesh, situated in the Ganges Delta formed by the confluence of the Ganges, Brahmaputra and Meghna rivers. Most of the country of nearly 150 million inhabitants is less than 10 metres above sea level; it is swamped by annual floods, and battered by cyclones and tornadoes, while the interior can be subject to drought.Villagers fishing in a canal after most of the ponds were submerged in floodwaters, Sariakandi, Bogra District. (Photo by Abir Abdullah/Visa pour l’Image) 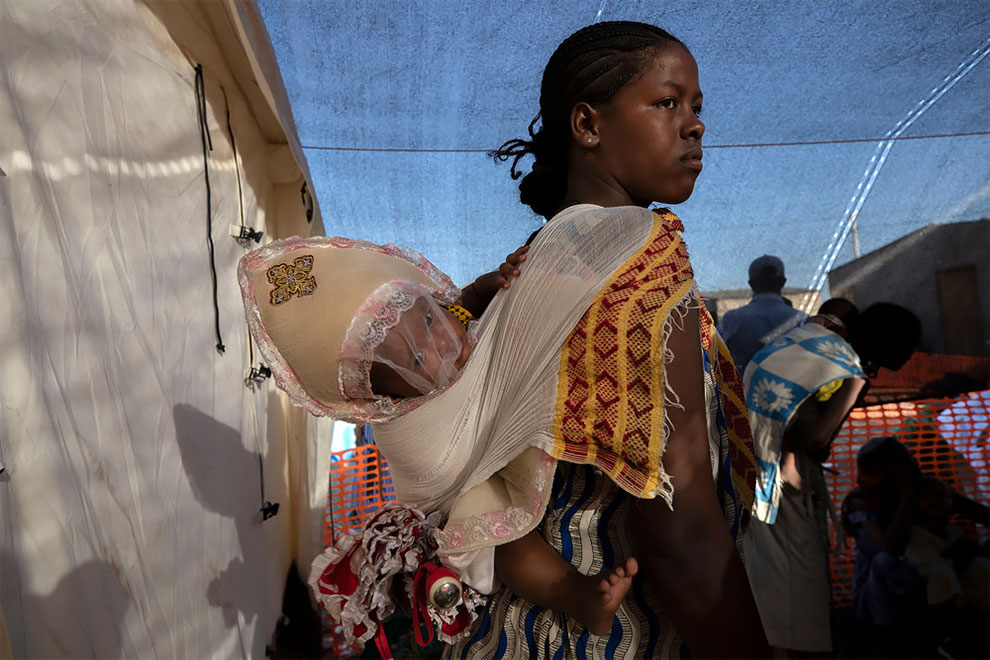 “Tigray: Fleeing War”. More than 62,000 refugees from Ethiopia’s embattled region are in Sudan fleeing the conflict. Many arrive at camps, malnourished, to wait for food, word from loved ones, water. It is not known how many thousands have been killed since fighting began on November 2020. The UN noted reports of rape as a weapon of war, artillery strikes on populated areas, burnt crops, civilians being targeted and widespread looting.A refugee waits for treatment at a clinic near Lugdi border crossing, eastern Sudan, December, 2020. (Photo by Nariman El-Mofty/Visa pour l’Image) 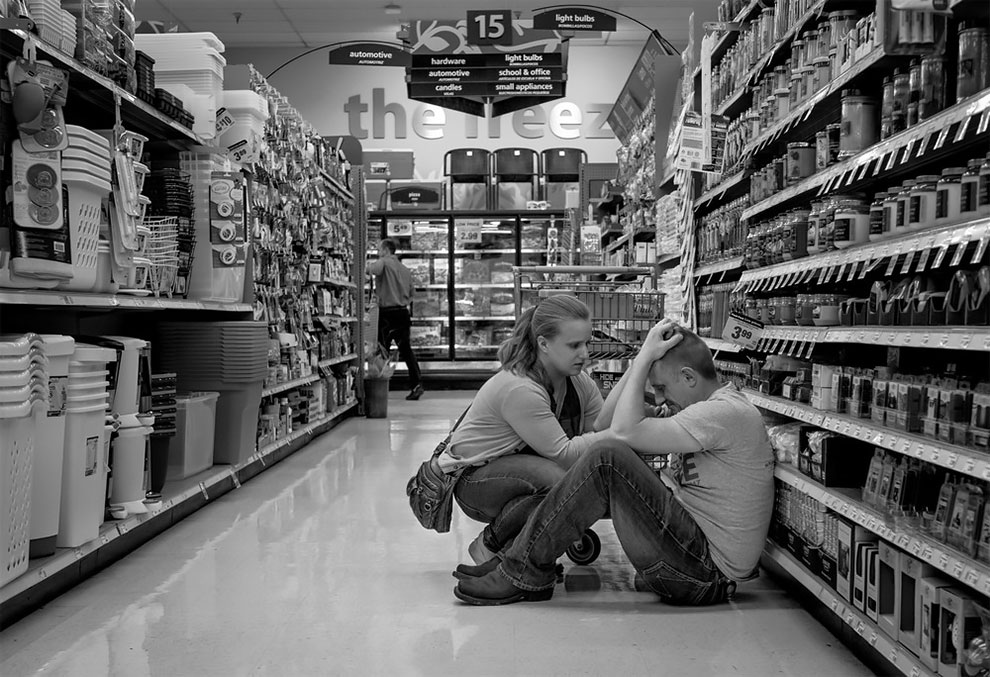 “Military Sexual Trauma in the US”. Rachel Lloyd comforting husband Paul who has had a flashback. While looking for light bulbs in the supermarket near his home, he stopped to smell a scented candle. Suddenly he sank to the floor, hiding his face and sobbing. The candle had the same fragrance as the shampoo he had been using in the shower at army basic training in 2007, when he was attacked and raped by another recruit. (Photo by Mary F. Calvert/Visa pour l’Image) 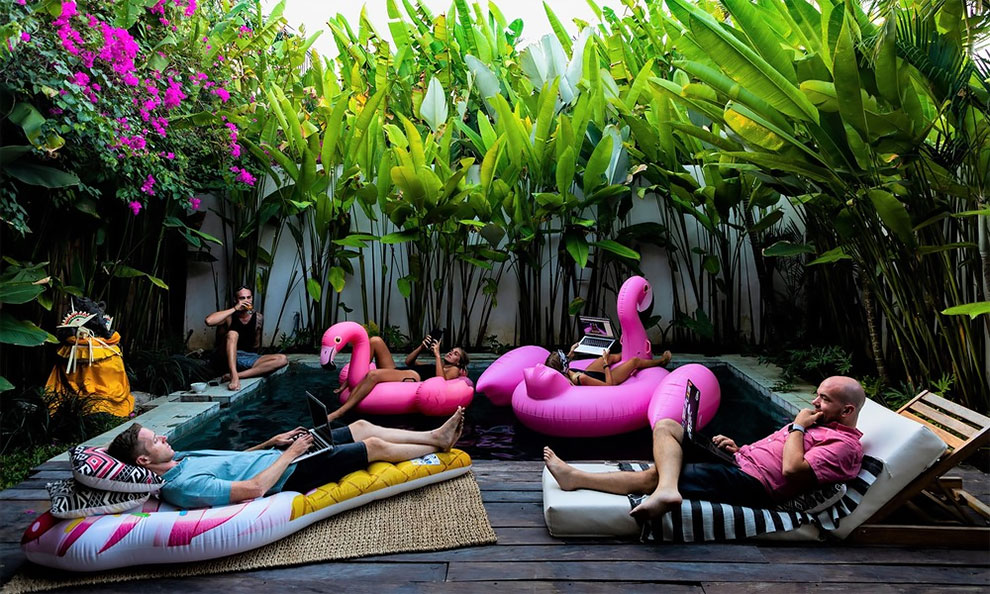 “Telework: Connected Work for Disconnected People”. Nina 31, lounging on the inflatable flamingo, conducting a work session with friends in a house in Bali. (Photo by Jerome Gence/Visa pour l’Image)

Sublime Street Photographs Of Hong Kong In The 1950s And 1960s
Cherry Blossoms Paint A Lake Purple Making Tokyo Look Like A Fairytale
Christine Osinski’s Photographs Of Staten Island’s Overlooked New Yorkers In 1980s
Wake Me Up Before You Go-Go! Brilliant 1980s Pop & Rock Music Publicity Photos
Historical Photos Of The 1918 Spanish Flu That Show What A Global Pandemic Looked Like In The 1910s
Amazing Winners Of The 2021 iPhone Photography Awards
Photographer Spends Eternity Waiting For Museum Visitors To Match Artworks
20 Award-Winning Photos Capture the Terror and Beauty of Giving Birth During the Pandemic
Poetic, Emotional and Minimalist Photographs by Kersti K
Colombian Salsa Dancers
Experience The Beauty Of Autumn Around The World
The Veolia Environnement Wildlife Photographer of the Year Competition
Photo of the Day: Cesar Romero As The Joker Stands Beside A Green Surfboard At The Beach, 1967
Golden Age of Facial Hair: Cool Photos That Defined Beard Styles of Victorian Men
September 18: This Day in Photos from the Past
Photographer Perfectly Captures Captures Hidden Parallel Worlds Of Everyday Puddles
Extraordinary Black And White Photographs Of London In The Early 1950s
Ralph Lauren’s ‘Very British’ Collection at 2012 New York Fashion Week Finale
Fascinating Nostalgic Color Photos Show What the World Looked Like in the 1950s
Photographer Jack Davison Captures The Best Actors Of 2019 With A Minimalist And Inventive Approach
This Super Mario Themed Wedding Is The Ultimate In Geek Chic
Fabulous Photos of Christmas Shopping In New York City, December 1910
Stunning Black and White Photos of Chicago in 1988
Fine Art And Dark Beauty Portrait Photography By Haris Nukem
Fascinating Photographs Of The World's Biggest Albino Family
Photographer Boris Leist Captures The World's Most Hardcore Live Action Role Players
Vintage Photos of Vanessa Paradis in the 1980s
The Atlas of Beauty: Photographer Mihaela Noroc Provides a Rare Look at Women in North Korea
Pet Photographer Cat Race Is Taking Beautiful Photos Of Canines All Over The World
Stunning Photos Of The Abandoned Armoured Repair Factory In Kharkiv, Ukraine
festival, Perpignan, photojournalism