Pachinko is a mechanical game originating in Japan and is used as both a form of recreational arcade game and much more frequently as a gambling device, filling a Japanese gambling niche comparable to that of the slot machine in Western gaming. A pachinko machine resembles a vertical pinball machine, but has no flippers and uses a large number of small balls. The player fires balls into the machine, which then cascade down through a dense forest of pins. If the balls go into certain locations, they may be captured and sequences of events may be triggered that result in more balls being released. The object of the game is to capture as many balls as possible. These balls can then be exchanged for prizes.

Pachinko machines were originally strictly mechanical, but modern ones have incorporated extensive electronics, becoming similar to video slot machines. Pachinko parlors are widespread in Japan, and they usually also feature a number of slot machines (called pachislo or pachislots); hence, these venues operate and look similar to casinos. Modern pachinko machines are highly customizable, keeping enthusiasts continuously entertained. Gambling for cash is illegal in Japan. Balls won cannot be exchanged directly for money in the parlor. The balls are exchanged for tokens or prizes, which are then taken outside and exchanged for cash at a place nominally separate from the parlor. 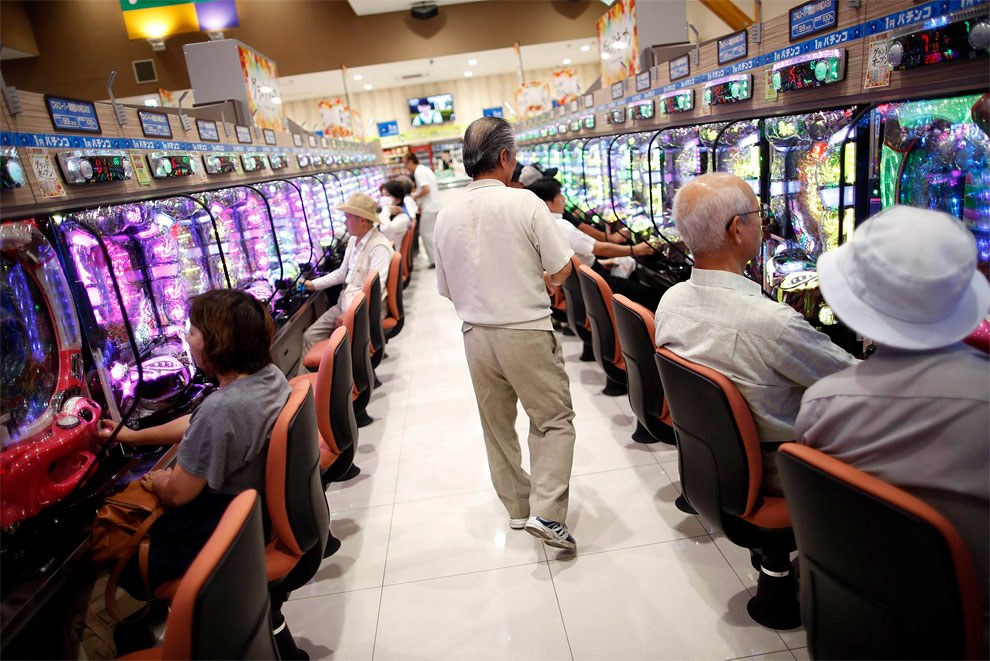 Visitors play at Dynam’s pachinko parlour in Fuefuki, west of Tokyo June 19, 2014. Japan’s once-booming pachinko industry, grappling with a greying customer base and the threat of new competition from casinos, is adopting a softer touch and smoke-free zones to lure a new generation of players, particularly women. Pachinko, a modified version of pinball, is a fading national obsession, with about 12,000 parlours nation-wide and one in thirteen people playing the game. But that figure is declining as the population shrinks and younger people prefer games on their mobile phones. (Photo by Issei Kato/Reuters)
END_OF_DOCUMENT_TOKEN_TO_BE_REPLACED