Krapp Strapp Will Help You Poo In Nature Hands-Free

There’s really nothing quite like a good crap in the woods… You’re not staring at your phone while playing a game, or reading the back of the shampoo bottle to pass the time. There’s just leaning against a tree and taking the sights, sounds, and smells of nature! Well, now you won’t have to lean against hard, rough tree to take that nature poo, as someone has invented this ingenious strap. 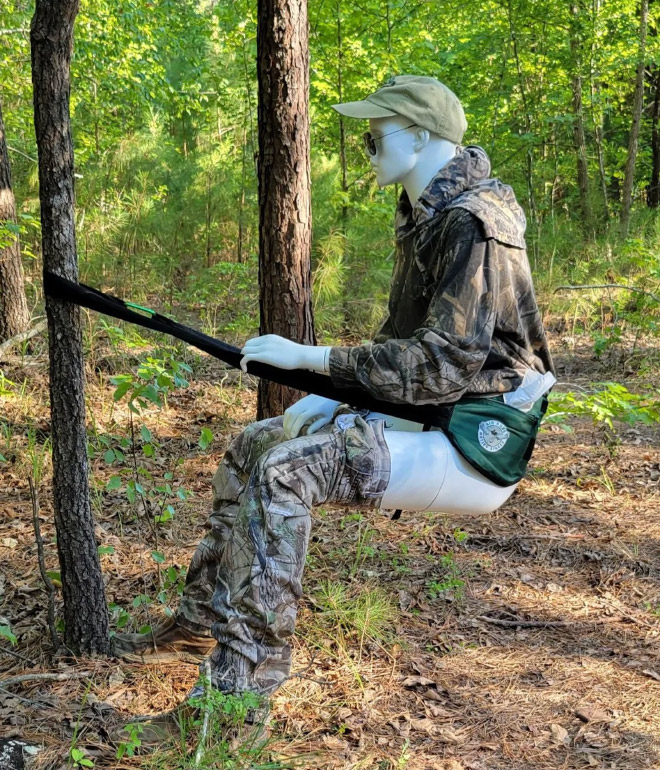 It’s called the Crap Strap, or Krapp Strapp as so they’ve named it. It’s essentially a giant fanny pack, except the strap is about 10 times larger than usual and allows you to strap yourself to the tree to lean back and take a care-free poo or pee without messing up your trousers or your shoes. END_OF_DOCUMENT_TOKEN_TO_BE_REPLACED 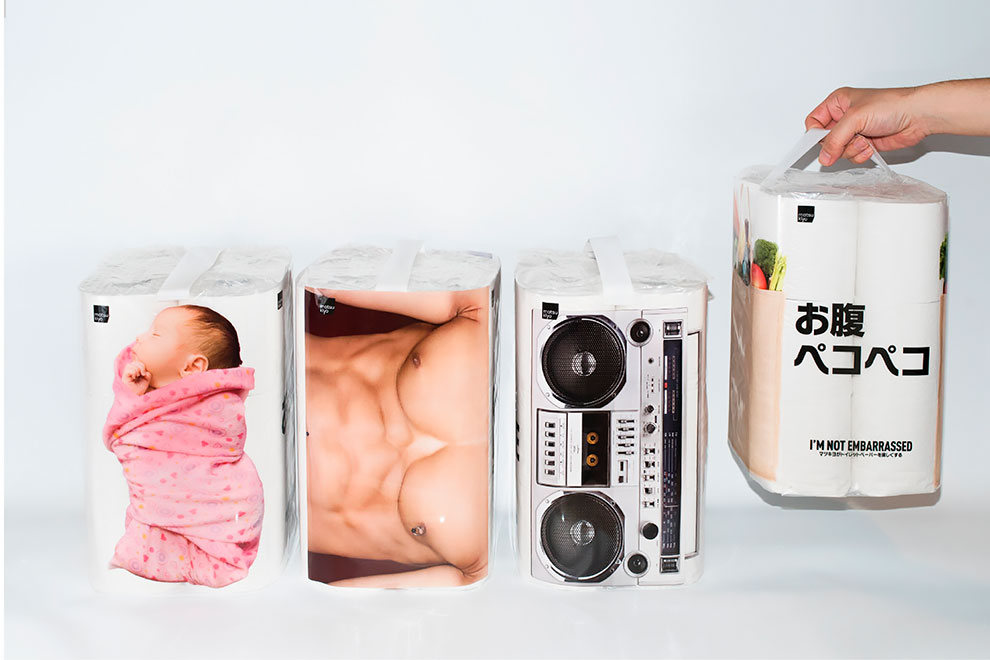 Matsumotokiyoshi Holdings Co., Ltd., has a chain of drugstores nationwide. It’s private brand, “matsukiyo”, is a unique label that aims to deliver the brand’s vision of “making life in Japan enjoyable.” END_OF_DOCUMENT_TOKEN_TO_BE_REPLACED 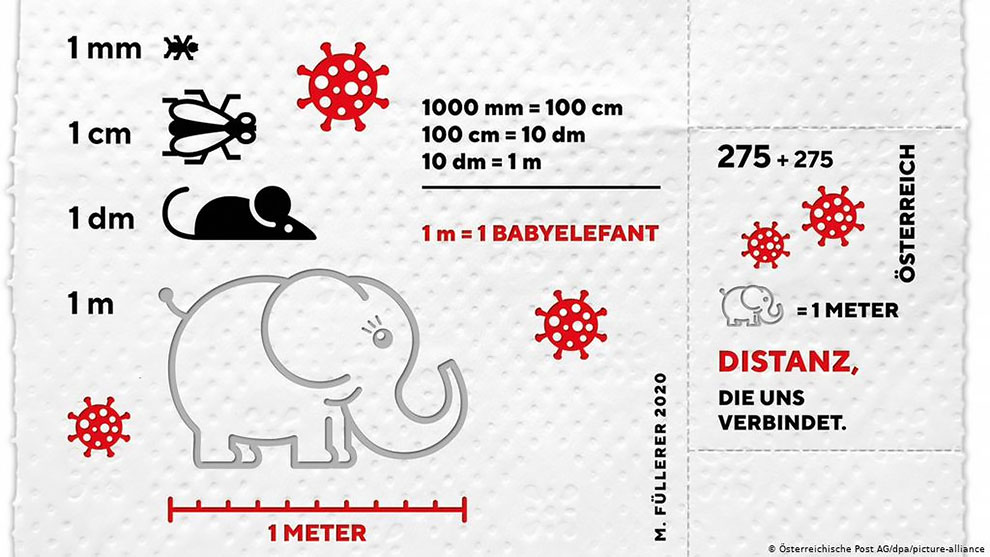 The stamp was inspired by the panic-buying of toilet paper when COVID-19 first hit Europe in the spring. It shows a baby elephant, a symbol which has encouraged citizens to keep their distance during the pandemic. END_OF_DOCUMENT_TOKEN_TO_BE_REPLACED

If You Take A Selfie Through A Toilet Roll Tube, You’ll Look Like The Moon 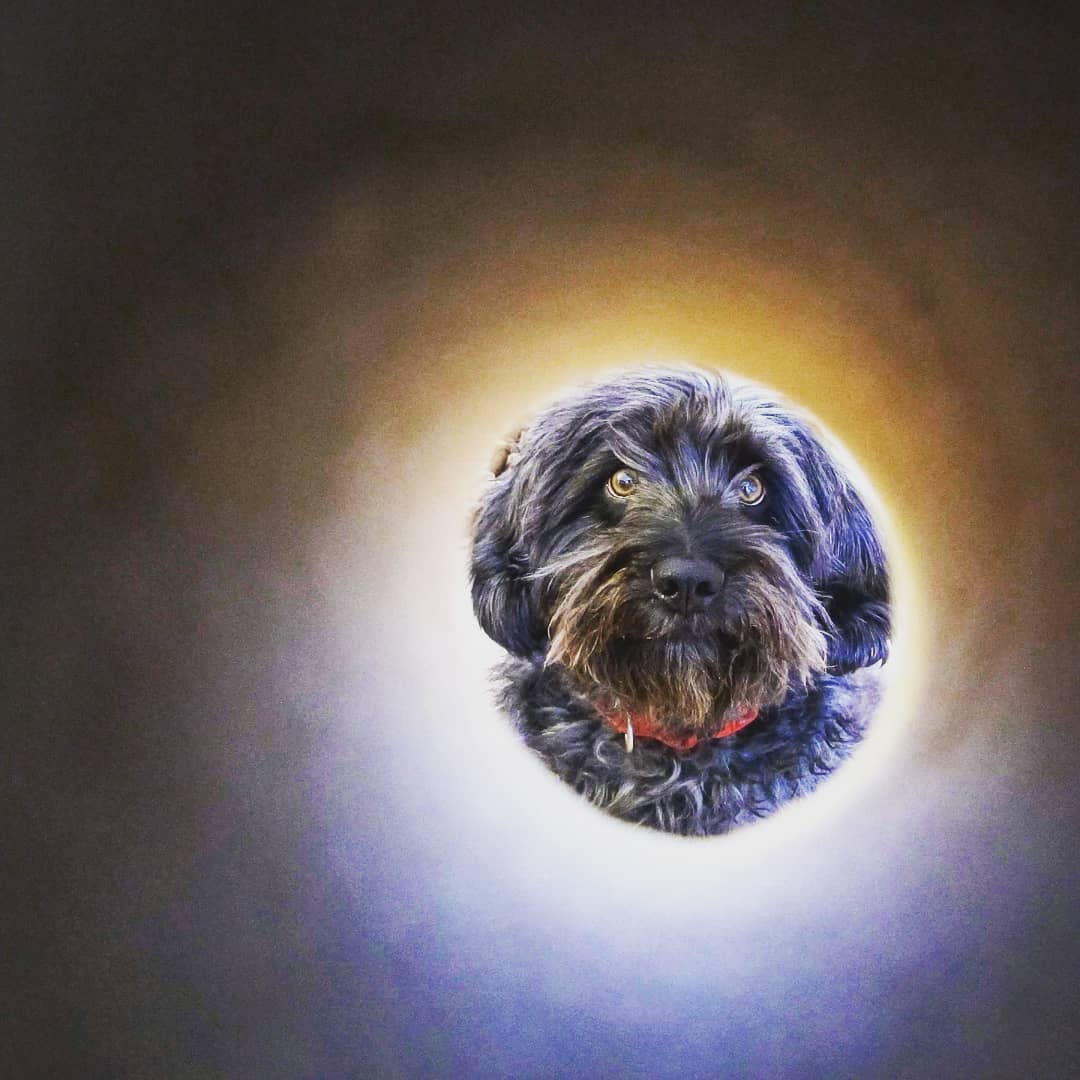 Welcome to the internet, the only place you’ll see people taking selfies trough toilet paper roll tube and pretending they’re the Moon… You can join them via #MoonSelfie tag on Instagram. END_OF_DOCUMENT_TOKEN_TO_BE_REPLACED 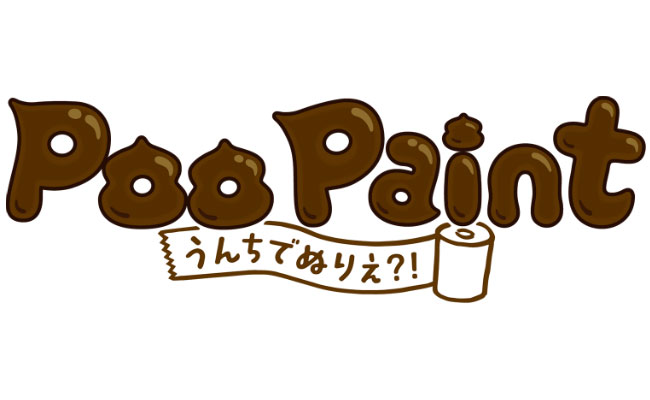 Children in Japan already have a poop museum to learn about how cute poop can be, but now they have a potty training alternative with some artistic incentive in PooPaint–a toilet paper that encourages you to make art with your poop! END_OF_DOCUMENT_TOKEN_TO_BE_REPLACED 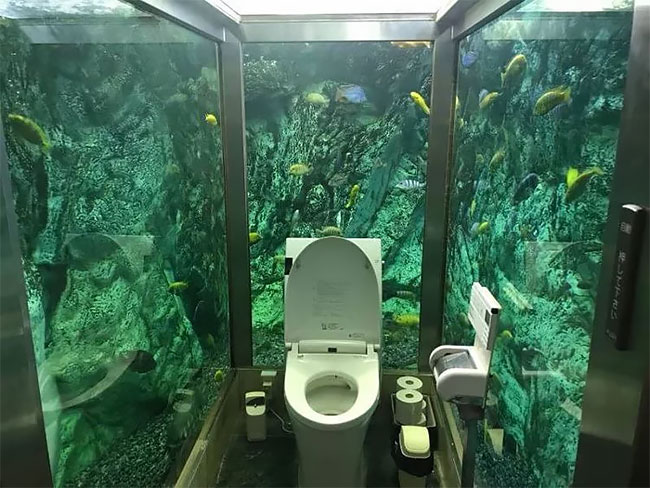 If you love exotic fish and don’t mind hundreds of them eyeballing you while you answer nature’s call, you’ll probably love using this unique aquarium toilet in Akashi, Japan. END_OF_DOCUMENT_TOKEN_TO_BE_REPLACED

If You Take A Selfie Through A Toilet Roll Tube, You’ll Look Like The Moon 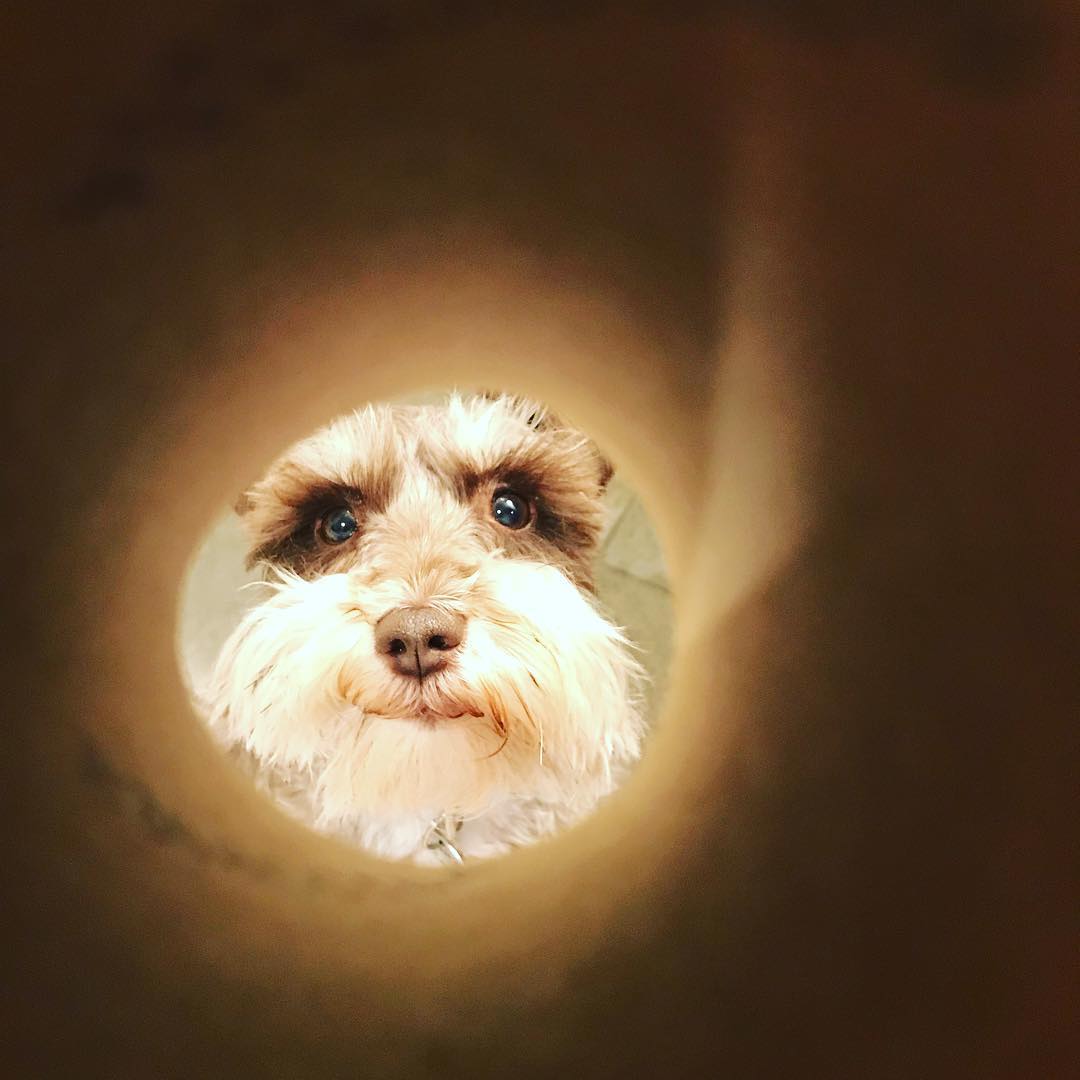 Toilet Design: The Most Outrageous Projects For many people toilet is a place for inspiration. Only here, in this room people tend to relax completely, abstract themselves from the outer world and bad thoughts, flip through some magazines and anything else they do there!

But most frequently we don’t look at this special and dear room as at something that can be designed with an idea. Generally, toilets are built with only functionality in mind, while they also can bring joy and become a place to free your inner designer. END_OF_DOCUMENT_TOKEN_TO_BE_REPLACED

“WC For Architects”: Old Toilet Wall Decorated With Photos Of Windows From The Neighbourhood 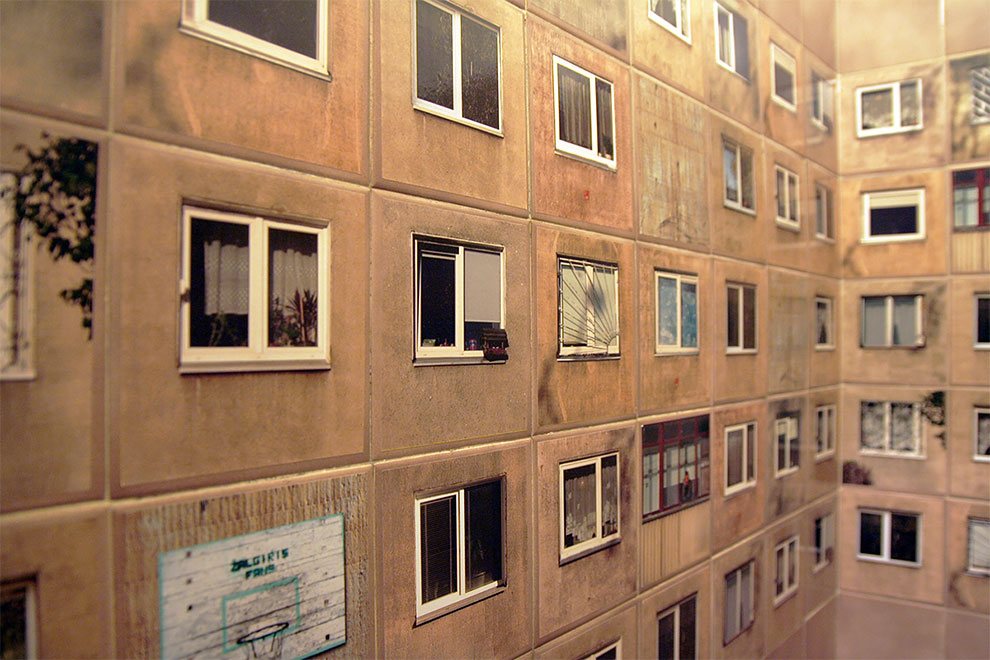 Here’s an unusual way to decorate a wall with photos: the Lithuanian design studio Gyva Grafika printed photos of apartment windows onto tiles. Once installed, they make any wall look like a Soviet-era concrete apartment block. END_OF_DOCUMENT_TOKEN_TO_BE_REPLACED 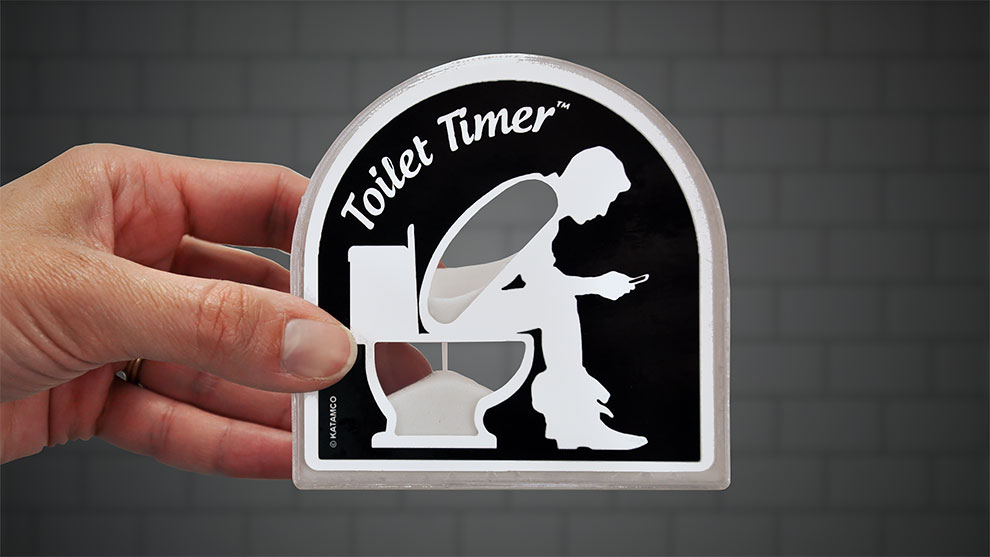 Adam Stephey and Elliot Worth from Normal, IL have one helpful tip to improve your life: spend less time doing your (ahem) “business” in the bathroom. That’s why they created a product called the Toilet Timer. END_OF_DOCUMENT_TOKEN_TO_BE_REPLACED

Probably, The Most Cozy And Beautiful Toilet In The World With Views Of A Norwegian Waterfall 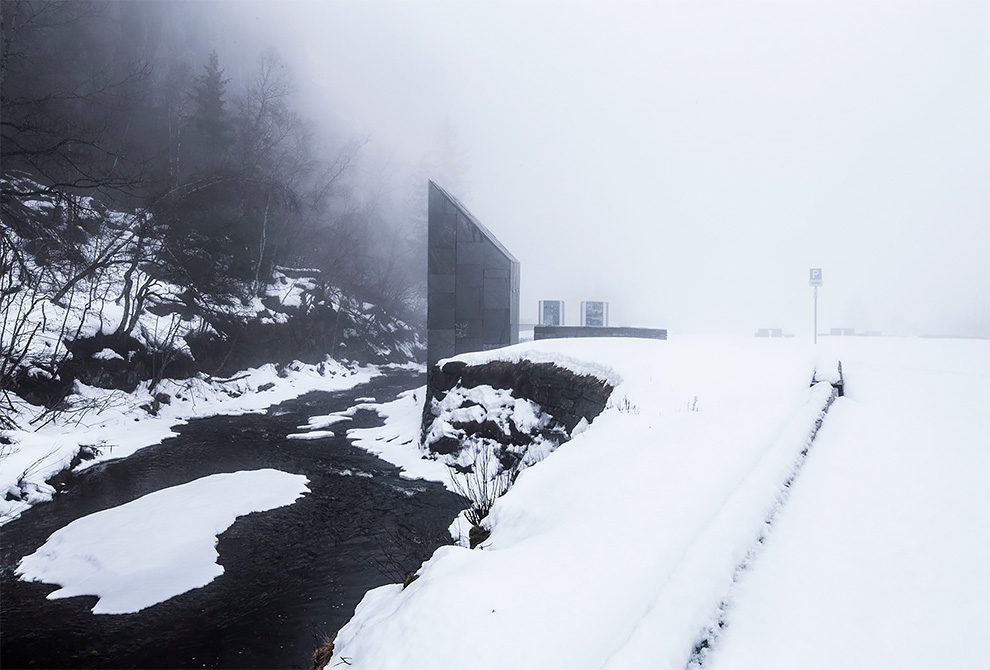 Visitors to Norway’s Skjervsfossen waterfall can watch the Storelvi river rush by through a glazed floor panel in the restrooms of this service building, which is clad in local stone to accentuate its connection with the surrounding landscape. END_OF_DOCUMENT_TOKEN_TO_BE_REPLACED 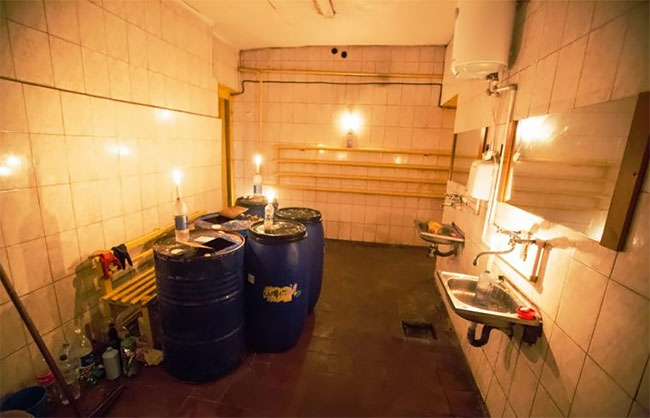 Public bathroom, it is usually a place that gives you a bad experience and you just try to erase it from your memory as soon as you get out of it. However at the central bus station in Voronezh, Russia, the public restroom has no electricity, water nor heating from the beginning of the year but they charge the fee around $0.25. END_OF_DOCUMENT_TOKEN_TO_BE_REPLACED 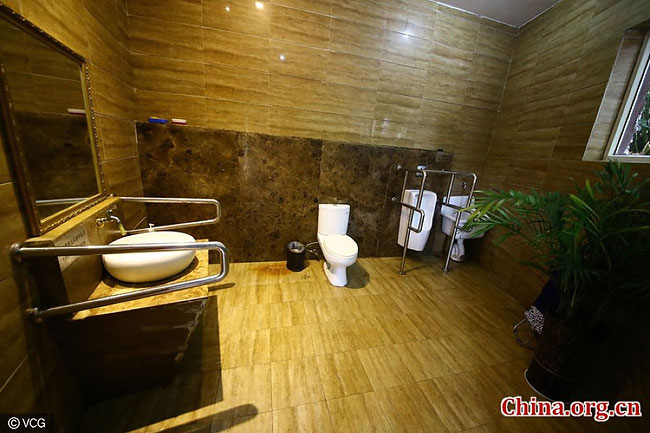 People generally avoid going into public toilets, unless they absolutely have to. Most of them are dirty, uninviting places, but that’s definitely not the case with this recently opened five-star public restroom in Chongqing, China. END_OF_DOCUMENT_TOKEN_TO_BE_REPLACED 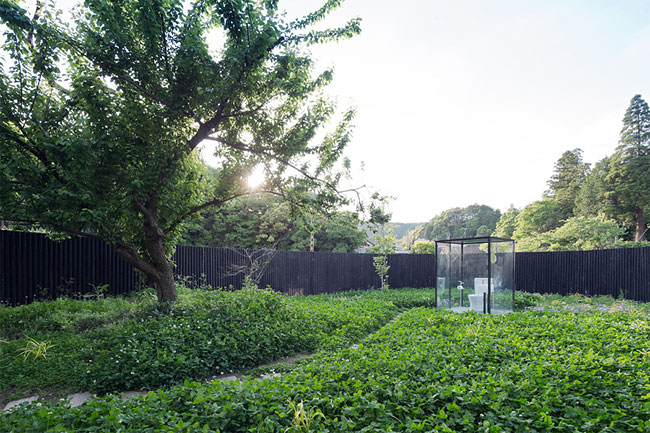 Whether you want to call it a toilet or an attraction, it actually works as both. As well as serving the purpose of a gorgeous and attractive attraction, the Serene Itabu Toilet also serves the purpose of fulfilling ones needs as a bathroom. END_OF_DOCUMENT_TOKEN_TO_BE_REPLACED 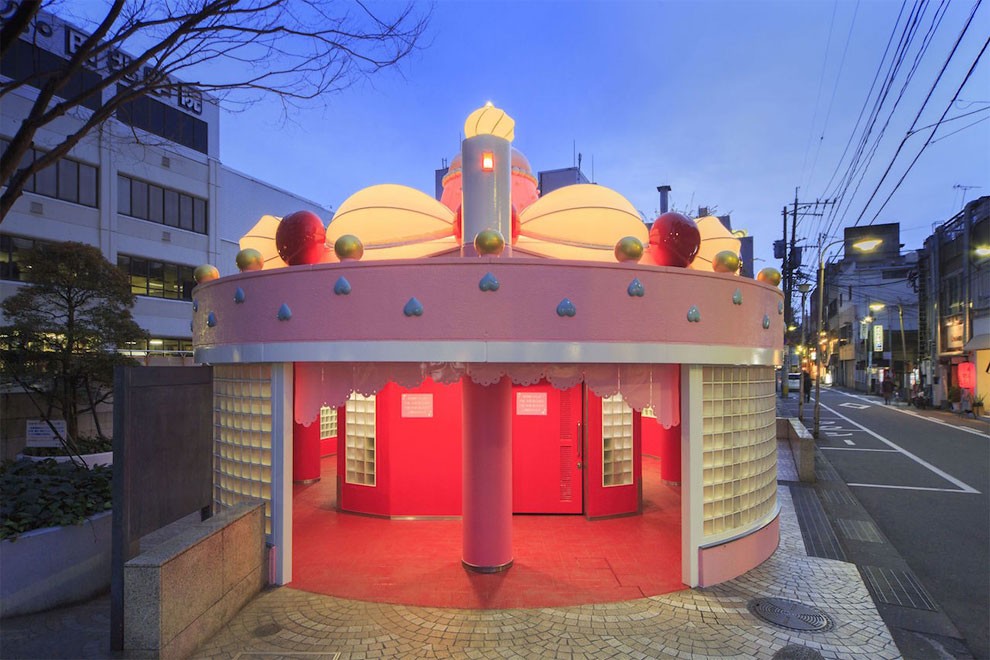 What looks like a giant cake, or possibly an ice cream sunday, stands in the street, connected to a park. This is a piece of art. But it’s also a public toilet. It’s both. As part of the 2015 Oita Toilennale, perhaps the world’s first art festival dedicated to toilets, artist Minako Nishiyama conceived of the project. And with the help of artists Mika Kasahara and Yuma Haruna, the 3 female artists brought “Melting Dream” to life. END_OF_DOCUMENT_TOKEN_TO_BE_REPLACED

While a vast majority of the world’s population has access to mobile phones, one third of humanity (2.5 billion people) do not have access to proper sanitation, including toilets or latrines, with dramatic consequences on human health, dignity and security, the environment, and social and economic development. To address these issues, the “Sanitation for All” Resolution was adopted by the United Nations General Assembly in July 2013, designating 19 November as World Toilet Day 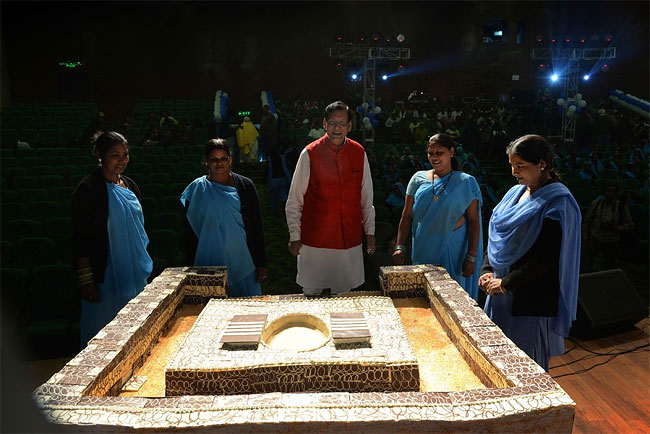 Indian social reform activist and founder of Sulabh Sanitation Bindeshwar Pathak (C) presents a 250-kilogram cake in the form of a squat toilet during a function to mark World Toilet Day In New Delhi on November 19, 2013. According to a 2011 census, some 131 million households in India have no latrine in their premises, with eight million using public facilities and 123 million defecating in the open. (Photo by Sajjad Hussain/AFP Photo) END_OF_DOCUMENT_TOKEN_TO_BE_REPLACED 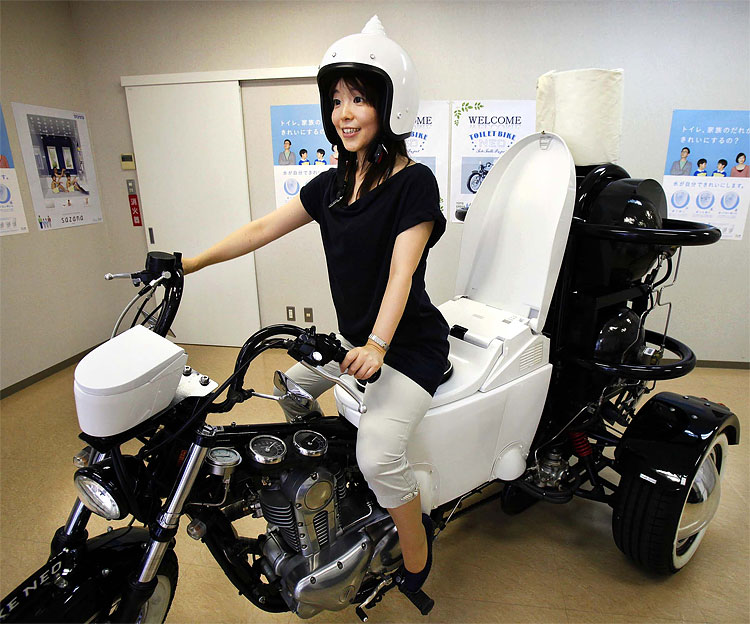 Japanese toilet maker TOTO employee Akiko Matsuyama gets on a “Toilet Bike Neo” displayed at its showroom in Fujisawa, near Tokyo. The company rolled out the eco-friendly three-wheel 250cc motorcycle with a specially customized toilet-shaped seat that runs on bio-fuel from the discharge of livestock or waste water. (Koji Sasahara/Associated Press)