Yucca is a genus of perennial shrubs and trees in the agave family, Agavaceae. Its 40-50 species are notable for their rosettes of evergreen, tough, sword-shaped leaves and large terminal panicles of white or whitish flowers. They are native to the hot and dry (arid) parts of North America, Central America, South America, and the Caribbean. Early reports of the species were confused with the cassava (Manihot esculenta). Consequently, Linnaeus mistakenly derived the generic name from the Carib word for the latter, yuca. It is also colloquially known in the midwest United States as “Ghosts in the graveyard”, as it is commonly found growing in rural graveyards and when in bloom the flowers appear as an apparition floating. 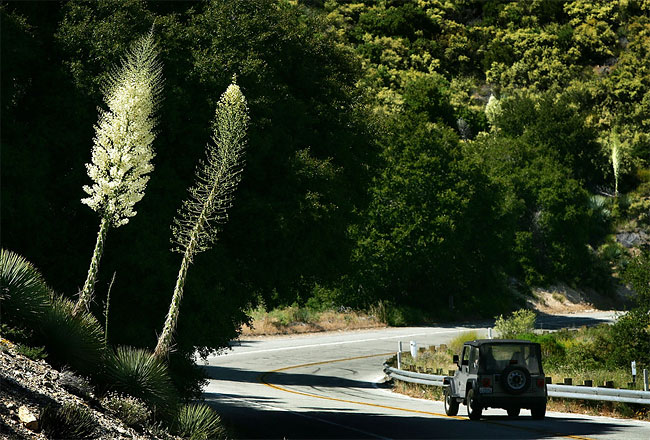 A yucca standing among flowers bursts forth a very large stalk of flowers as a heavy wildflower bloom on June 21, 2005 in the Angeles National Forest northwest of La Canada, California. (Photos by David McNew/Getty Images) END_OF_DOCUMENT_TOKEN_TO_BE_REPLACED