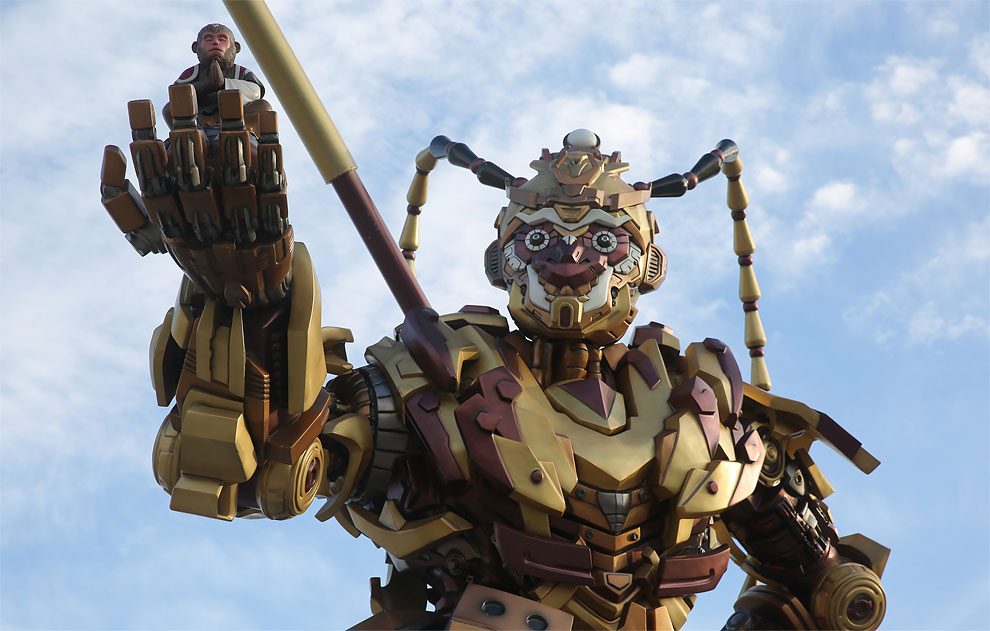 A huge Monkey King-shaped transformer monument has risen in Qingdao, east China’s Shandong Province. The transformer stands more than 10 meters (33ft) high and is made of discarded auto parts. This is what I call creativity. Awesome piece of art. END_OF_DOCUMENT_TOKEN_TO_BE_REPLACED

This Monkey Street in Bangkok is Full of… Street Monkeys, and They’re Frisky! 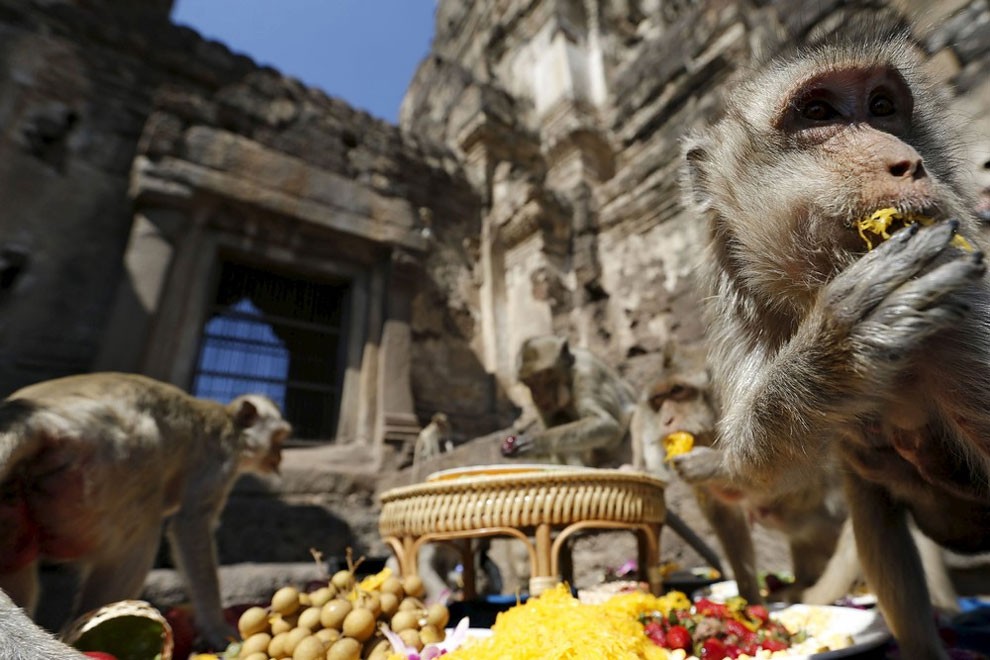 A long-tailed macaque eats fruits during the annual Monkey Buffet Festival at the Phra Prang Sam Yot temple in Lopburi, north of Bangkok, November 29, 2015. People provide food and drinks to the local monkey population, amounting to more than 2,000 monkeys, during this festival to thank them for drawing tourists to the town. (Photo by Jorge Silva/Reuters)
END_OF_DOCUMENT_TOKEN_TO_BE_REPLACED 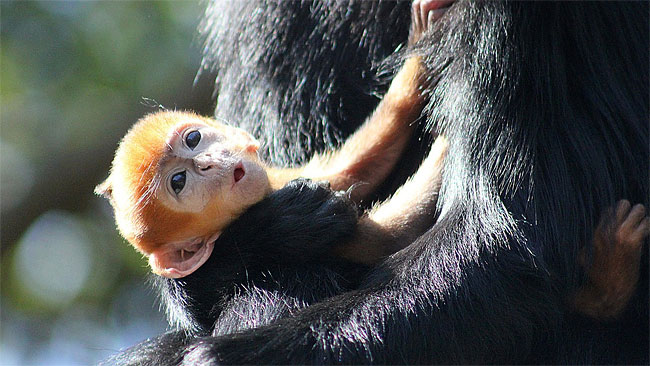 This tiny monkey has just been born at Sydney’s Taronga Zoo and he’s one of the rarest (and possibly cutest) baby monkeys in the world. END_OF_DOCUMENT_TOKEN_TO_BE_REPLACED

Photo of the Day: A Cheeky Selfie With A Monkey 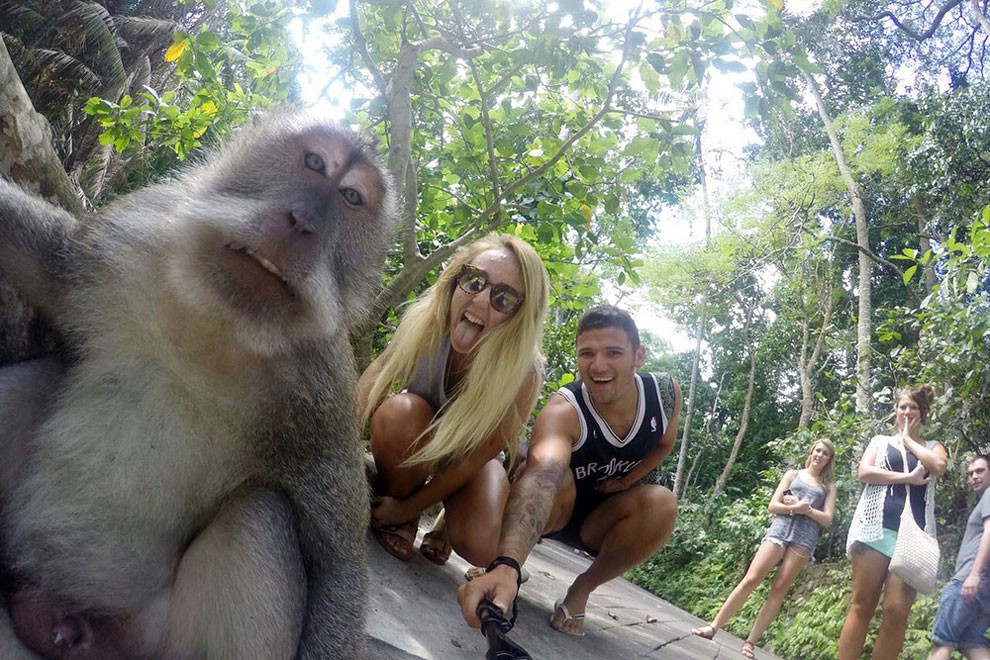 British tourists snap a cheeky selfie with a monkey at the Ubud Monkey Forest in Bali, Indonesia, August 4, 2015. George Benton, 22, from Paignton, Devon was visiting the Sacred Monkey Forest Sanctuary in Ubud, Bali whilst traveling with his girlfriend Chloe when the couple snapped a surprise shot with Balinese long-tailed monkey using a “selfie stick”.
END_OF_DOCUMENT_TOKEN_TO_BE_REPLACED 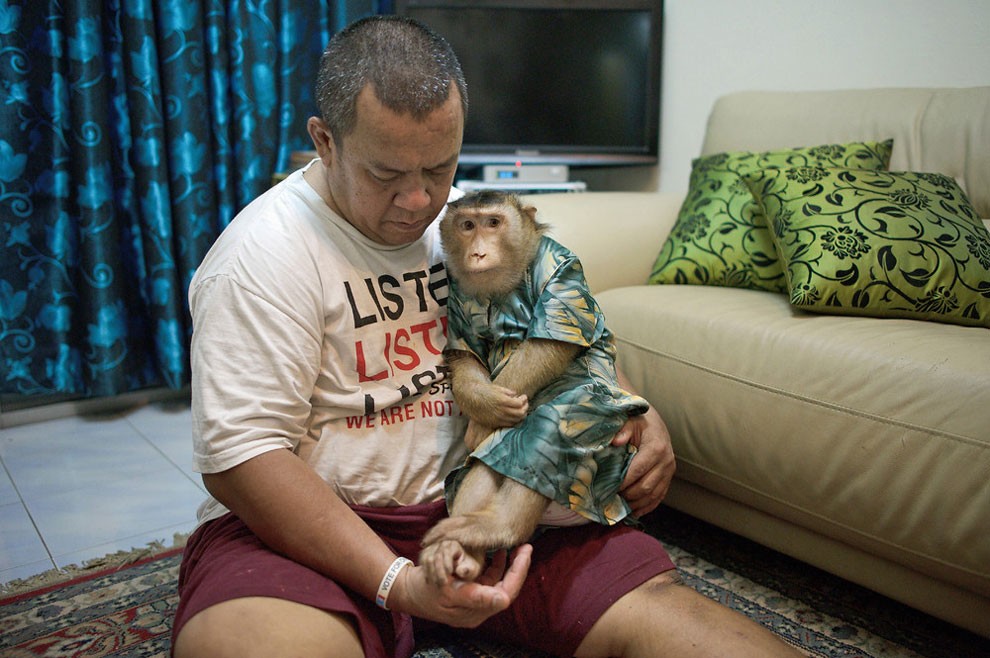 This photo taken on April 22, 2015, shows Jamil Ismail (Jamilkucing) hugging his female pet monkey named “Shaki”, dressed in a Malaysian cultural outfit called Baju Kurung, at Jamil’s house in Kuala Lumpur. Jamil, a 45-year single Malaysian man, has unusual pets – two macaque monkeys. JK and Shaki, both nine years old, usually ride with Jamil on his motorcycle and they often have dinner together in public restaurants, drawing instant public awe. At times Jamil uses the two monkeys, who sometimes wear traditional Malay clothes and other costumes, to act in advertisements and perform stunts in public areas. The monkeys which cost 56 USD each and receive regular medical check-ups, are regarded as his family and move freely within his house. (Photo by Mohd Rasfan/AFP Photo)
END_OF_DOCUMENT_TOKEN_TO_BE_REPLACED

A long-tailed macaque grabs a necklace from a statue during the annual Monkey Buffet Festival at the Pra Prang Sam Yot temple in Lopburi, north of Bangkok November 30, 2014. The festival provides food and drinks to the local monkey population, which numbers more than 2,000, to thank them for drawing tourists to the town. (Photo by Damir Sagolj/Reuters)
END_OF_DOCUMENT_TOKEN_TO_BE_REPLACED 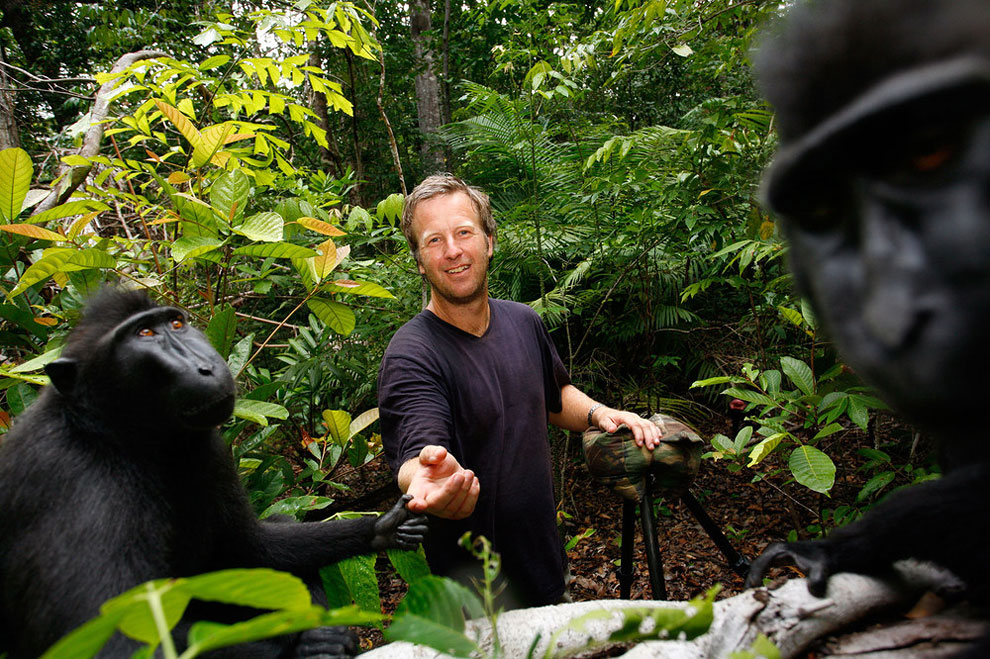 These are the chimp-ly marvellous images captured by a cheeky monkey after turning the tables on a photographer who left his camera unmanned. The inquisitive scamp playfully went to investigate the equipment before becoming fascinated with his own reflection in the lens. And it wasnt long before the crested black macaque hijacked the camera and started snapping away sending award-winning photographer David Slater bananas. David, from Coleford, Gloucestershire, was on a trip to a small national park north of the Indonesian island of Sulawesi when he met the incredibly friendly bunch. END_OF_DOCUMENT_TOKEN_TO_BE_REPLACED 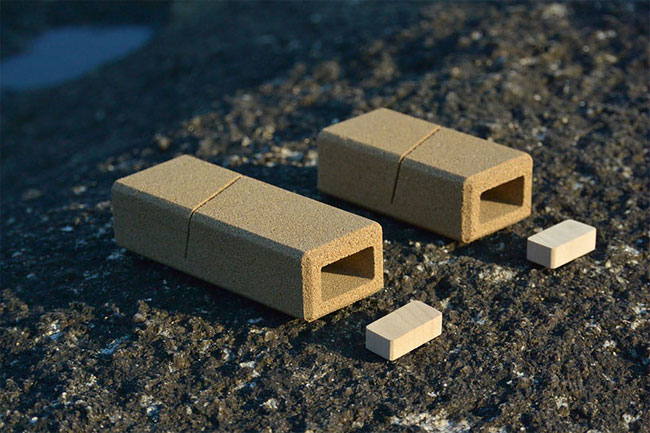 Sand-made packaging re-establishes the ritual of discovering a gift and the concept of sustainable packaging. As an answer to the increase of waste in modern society, we have developed a material using one of earth’s most abundant natural resources, sand, to create packaging for precious gifts.
END_OF_DOCUMENT_TOKEN_TO_BE_REPLACED 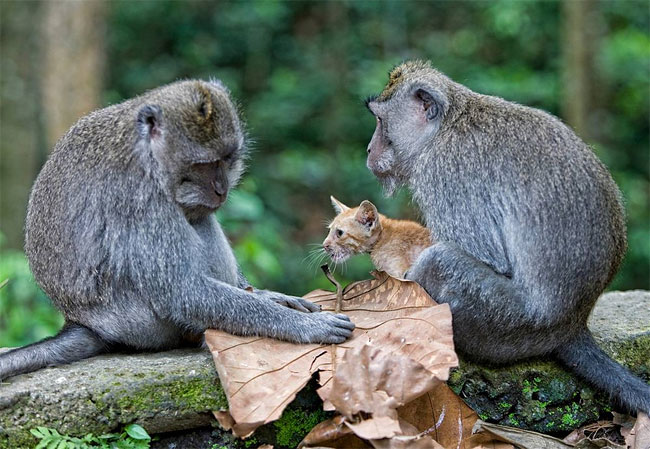 A wild monkey has stunned animal lovers after it adopted an abandoned kitten and cared for it as his own. The young long-tailed macaque monkey was spotted in a forest protectively nuzzling and grooming the ginger kitten, making sure no harm came to it. END_OF_DOCUMENT_TOKEN_TO_BE_REPLACED 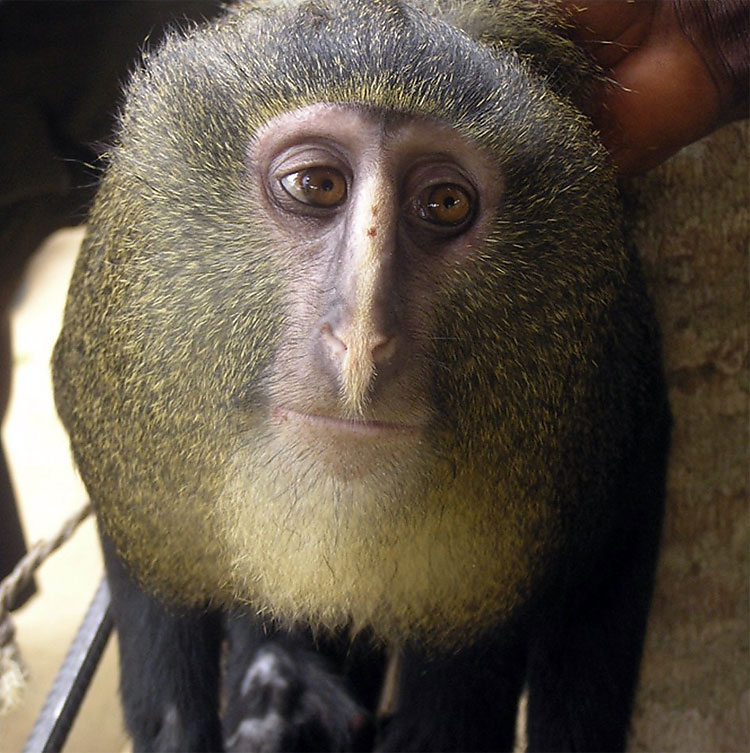 The Lesula monkeys are considered “vulnerable” as the locals hunt them for food or to sell to the bush-meat trade, thereby endangering their existence. The husband-wife team is now raising funds to launch a conservation project to protect the newly found species. (Reuters / Terese Hart / bonoboincongo.com) END_OF_DOCUMENT_TOKEN_TO_BE_REPLACED 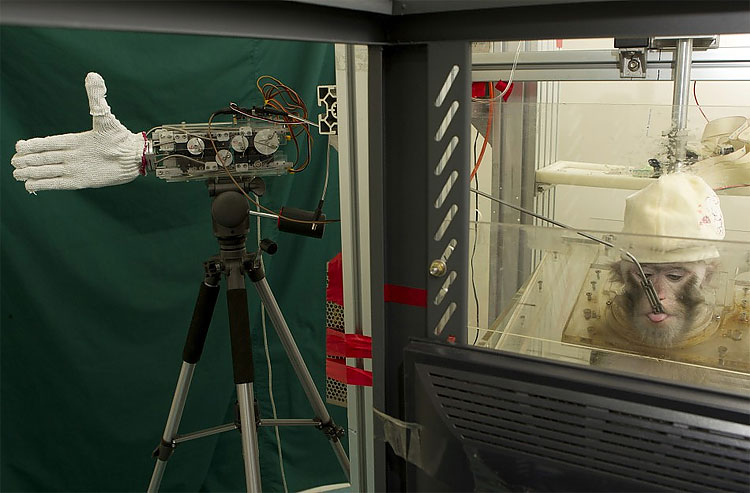 Jianhui, a 5-year-old monkey, is seen with a device attached to its head as it prompts a mechanical arm via brain signals at a laboratory at Zhejiang University in Hangzhou, Zhejiang province February 23, 2012. A tiny sensor implanted in Jianhui’s brain is allowing the monkey to control a mechanical arm to reach and grab food and drinks, scientists with east China’s Zhejiang University announced on Monday afternoon. The technology, Brain-Machine Interface (BMI), is a real blessing for people with paralyzing conditions, according to Zheng Xiaoxiang, the professor leading the research group. END_OF_DOCUMENT_TOKEN_TO_BE_REPLACED 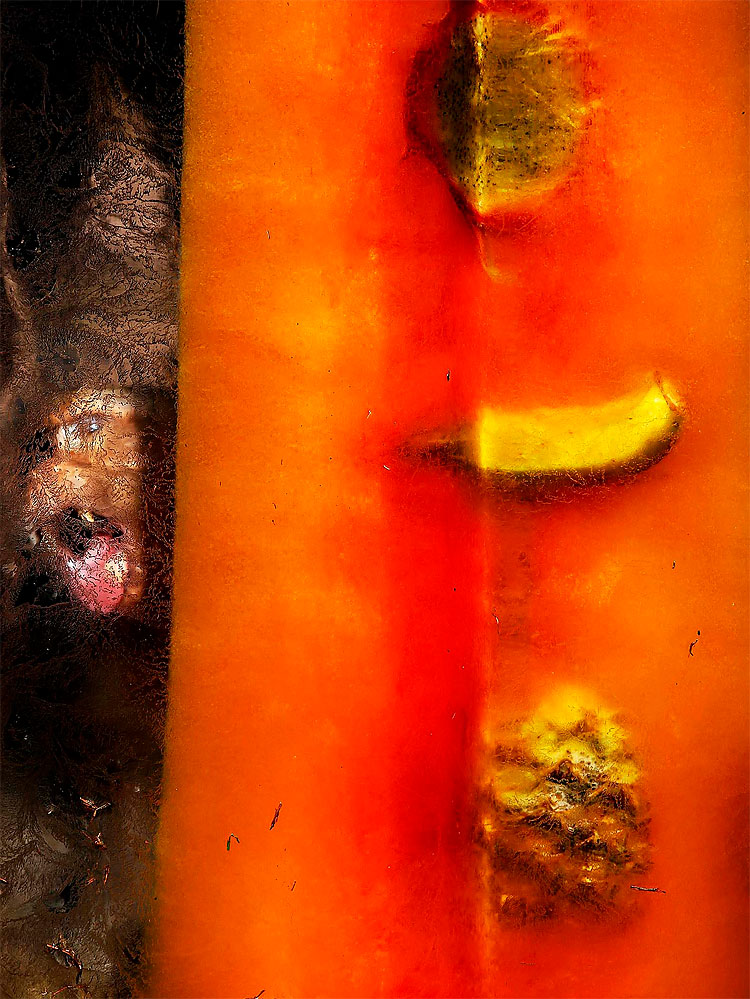 A long-tailed macaque licks an ice cube with fruits encased in it during the annual Monkey Buffet Festival at the Pra Prang Sam Yot temple in Lopburi, Thailand. The festival provides food and drinks to the local monkey population to thank them for drawing tourists to the town. (Damir Sagolj/Reuters)