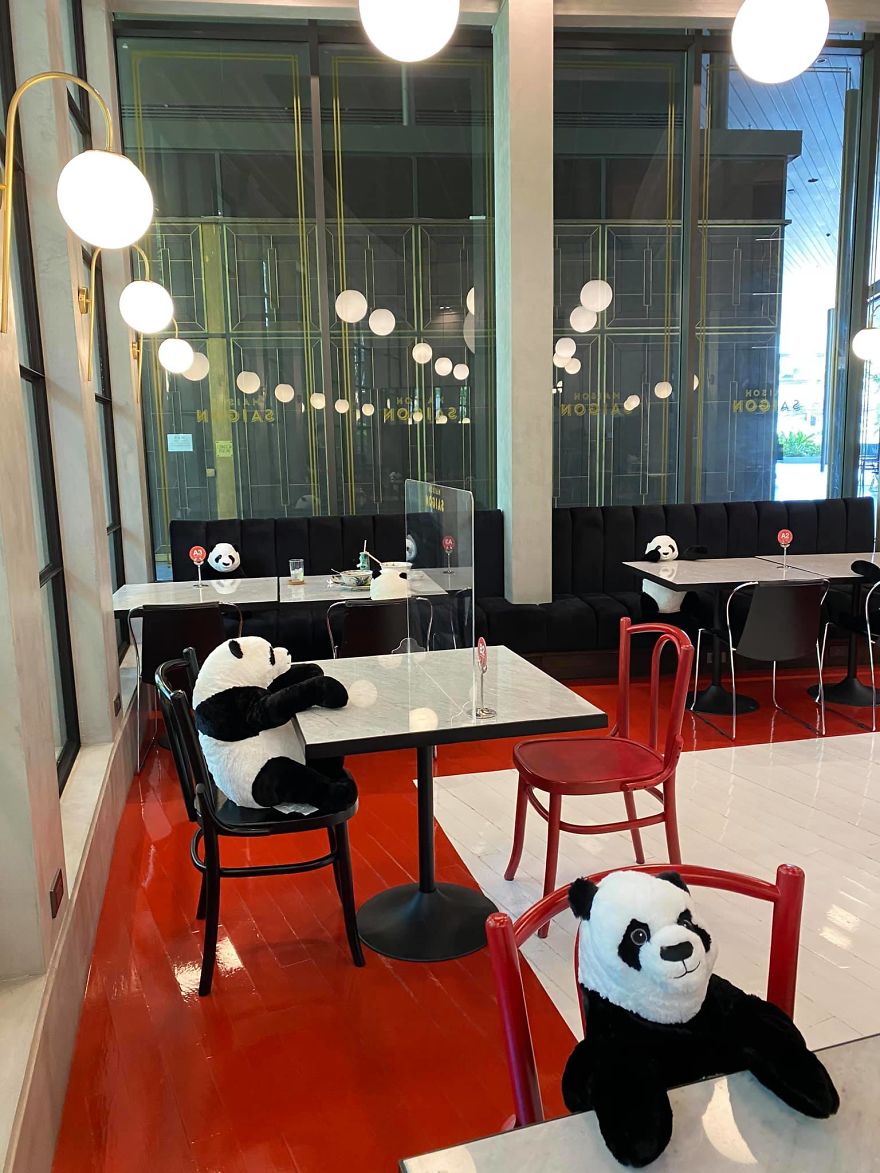 A lot of places are starting to open already, but there are still some worries and concerns about keeping social distance between people. Well, a Vietnamese restaurant in Thailand found the perfect solution for how to keep their customers apart—pandas! END_OF_DOCUMENT_TOKEN_TO_BE_REPLACED

Pandas Get To Know Their Wild Side 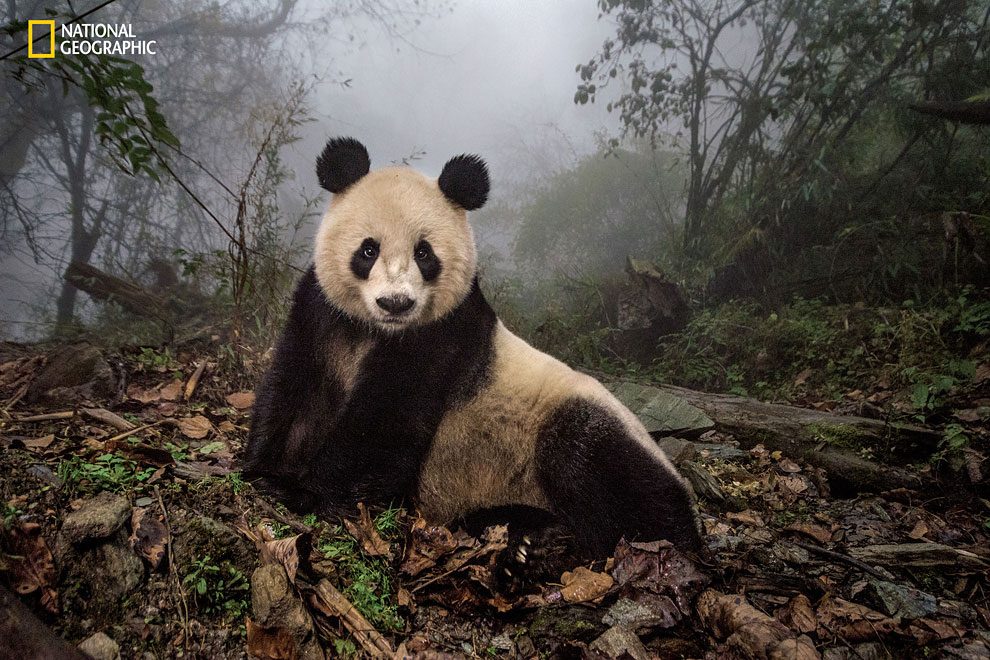 Pandas are one of the world’s most beloved bears, an animal that is not only adorable to many, but also a cultural icon, an economic mainstay and a source of national pride in China – the only country in which these Asian bears still survive. END_OF_DOCUMENT_TOKEN_TO_BE_REPLACED

A Cute Flash Mob Of 1,600 Papier-Mâché Pandas Has Occupied Bangkok 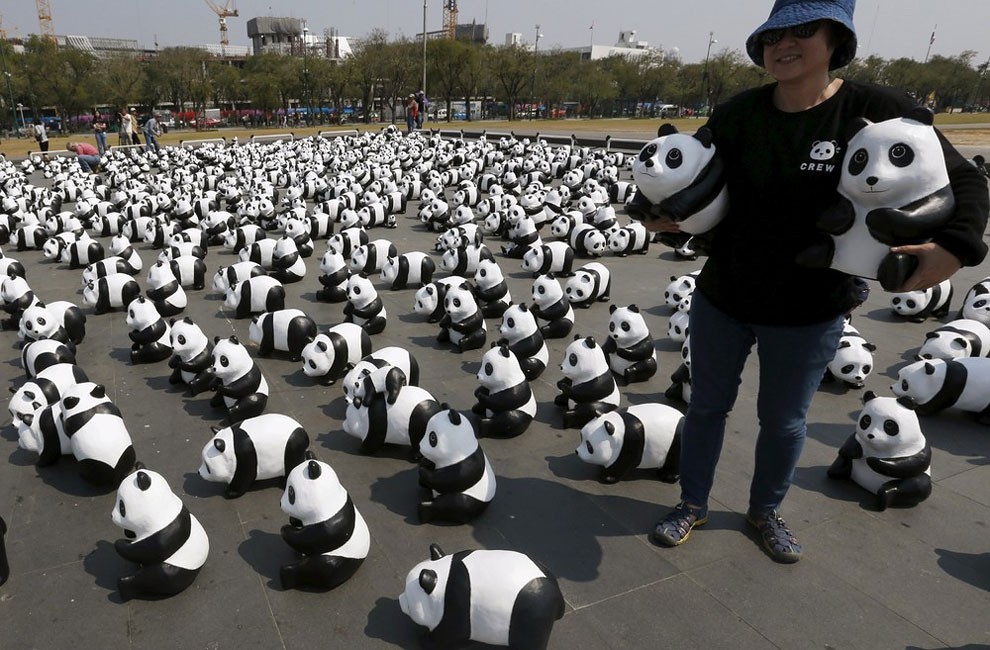 A volunteer arrange panda sculptures ahead of an exhibition by French artist Paulo Grangeon in Bangkok, Thailand, March 4, 2016. END_OF_DOCUMENT_TOKEN_TO_BE_REPLACED 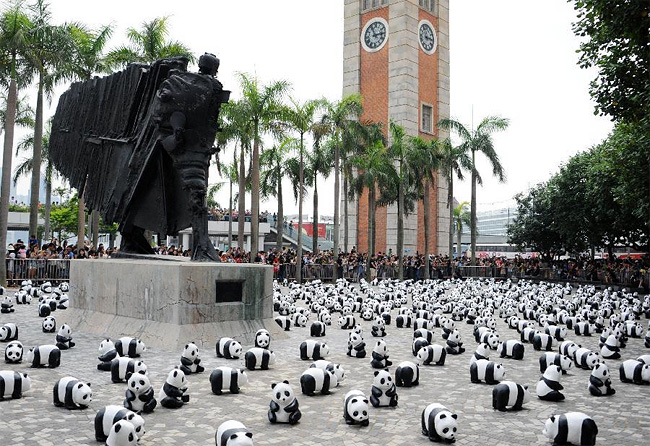 Paper pandas are placed during an exhibition in Tsim Sha Tsui, Hong Kong, June 14, 2014. A total of 1,600 paper pandas were displayed in the area on Saturday. The project is the work of French artist Paulo Grangeon and represents the amount of pandas alive on earth today. (Photo: Xinhua) END_OF_DOCUMENT_TOKEN_TO_BE_REPLACED 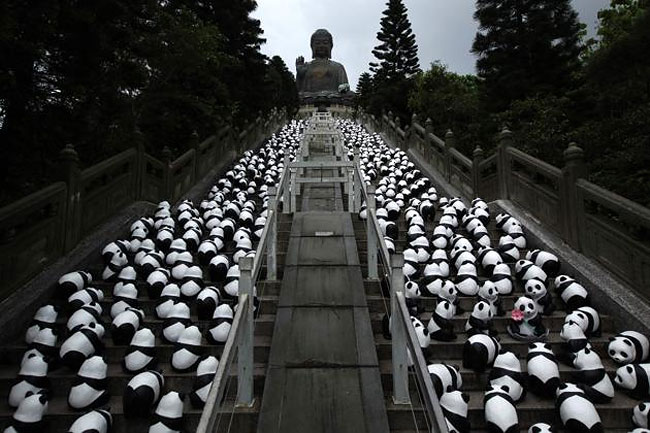 Open-Air Exhibition Of ‘Pandas’ Kicks Off In Taipei 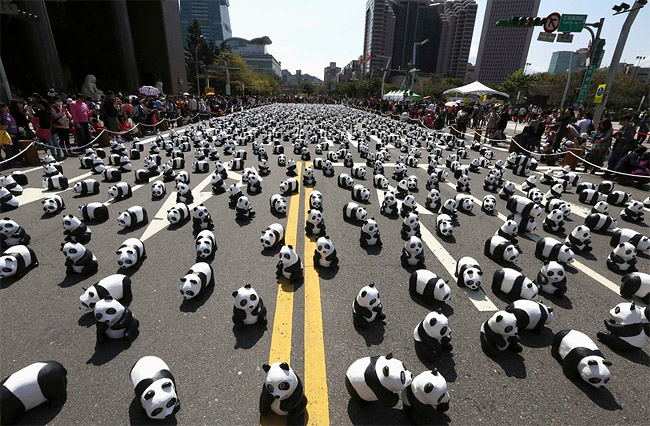 Papier mache pandas, created by French artist Paulo Grangeon, are seen displayed outside the Taipei City Hall as part of an exhibition called “Pandas on Tour”, February 28, 2014. According to local media, the event was launched by the World Wildlife Fund (WWF) first in Paris in 2008. Approximately 1,600 panda sculptures were displayed in the exhibition to remind people of the similar number of giant pandas still living in the wild and call on people’s protection of endangered species. (Photo by Patrick Lin/Reuters) END_OF_DOCUMENT_TOKEN_TO_BE_REPLACED 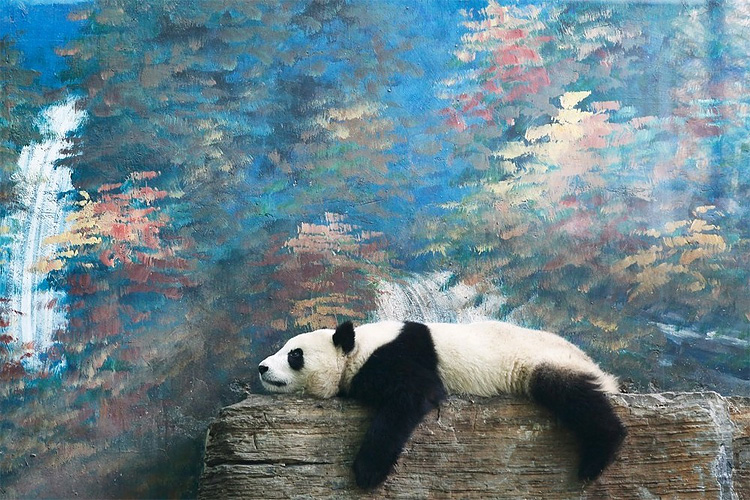 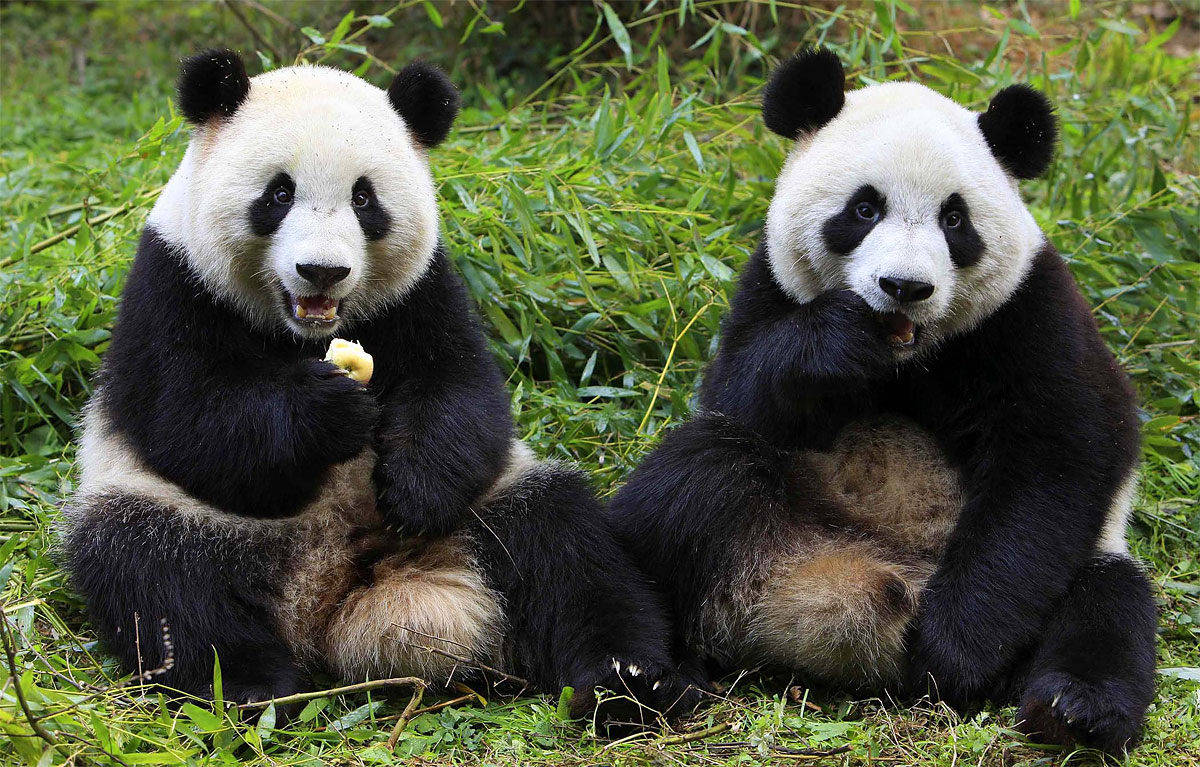 Giant pandas Qiqi and Zhizhi eat at the Chengdu Research Base of Giant Panda Breeding in Chengdu on December, 21. China will begin sending pandas bred in captivity into a controlled wilderness area in southwestern Sichuan province next month. (China Daily via Reuters) Click image to zoom.

Two pandas named Tian Tian and Yang Guang, which have been loaned to the Edinburgh Zoo in Scotland by China’s Bifengxia panda breeding centre in Ya’an recently, were shown to the press Monday. The giant pandas, which have been loaned for ten years in a move widely greeted as a symbol of strengthening ties between China and the UK, would be on show to the public from Dec. 16 onwards, said Edinburgh Zoo officials. 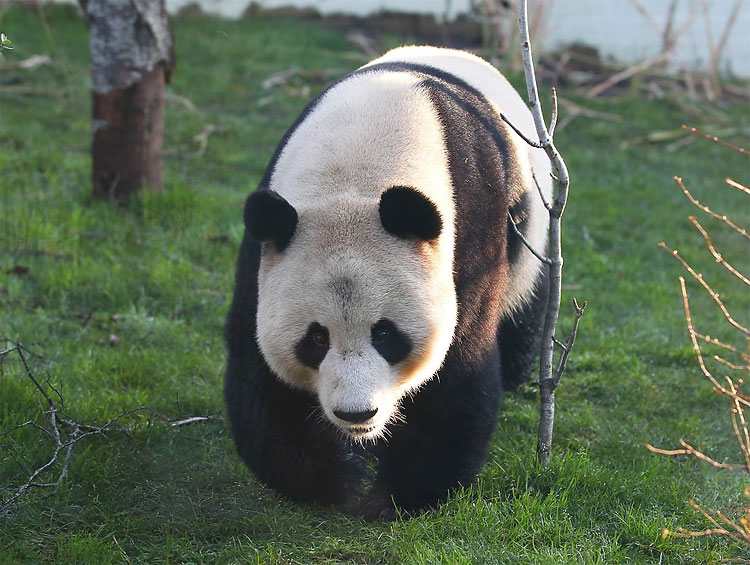 Photo of the Day: Pandas in a Crib 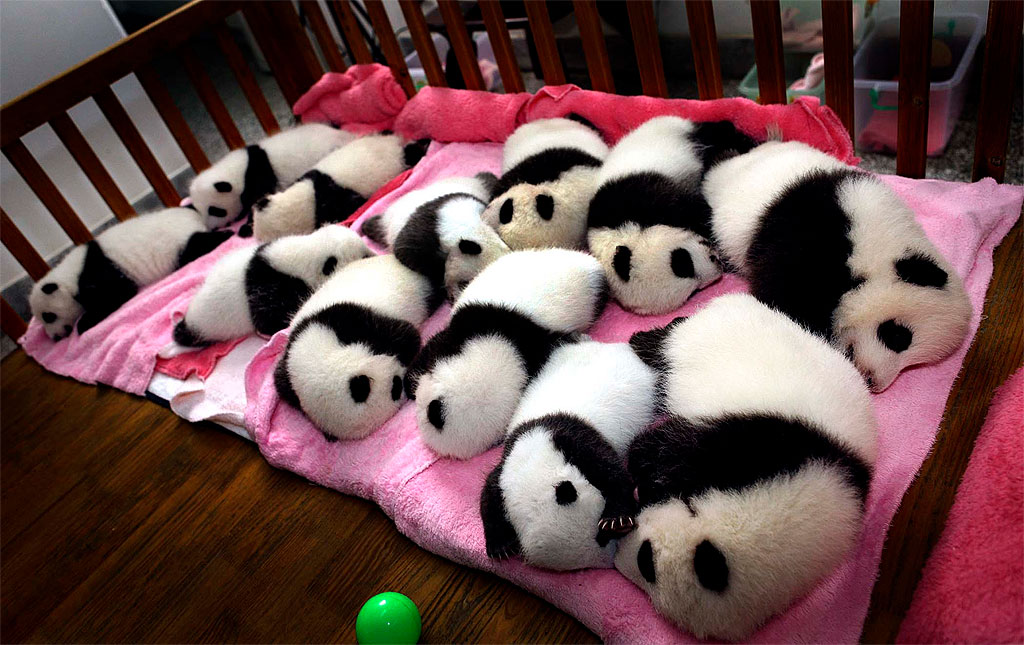 Giant Panda cubs lie in a crib at the Chengdu Research Base of Giant Panda Breeding in Chengdu, China. (China Daily via Reuters) Click image to zoom.