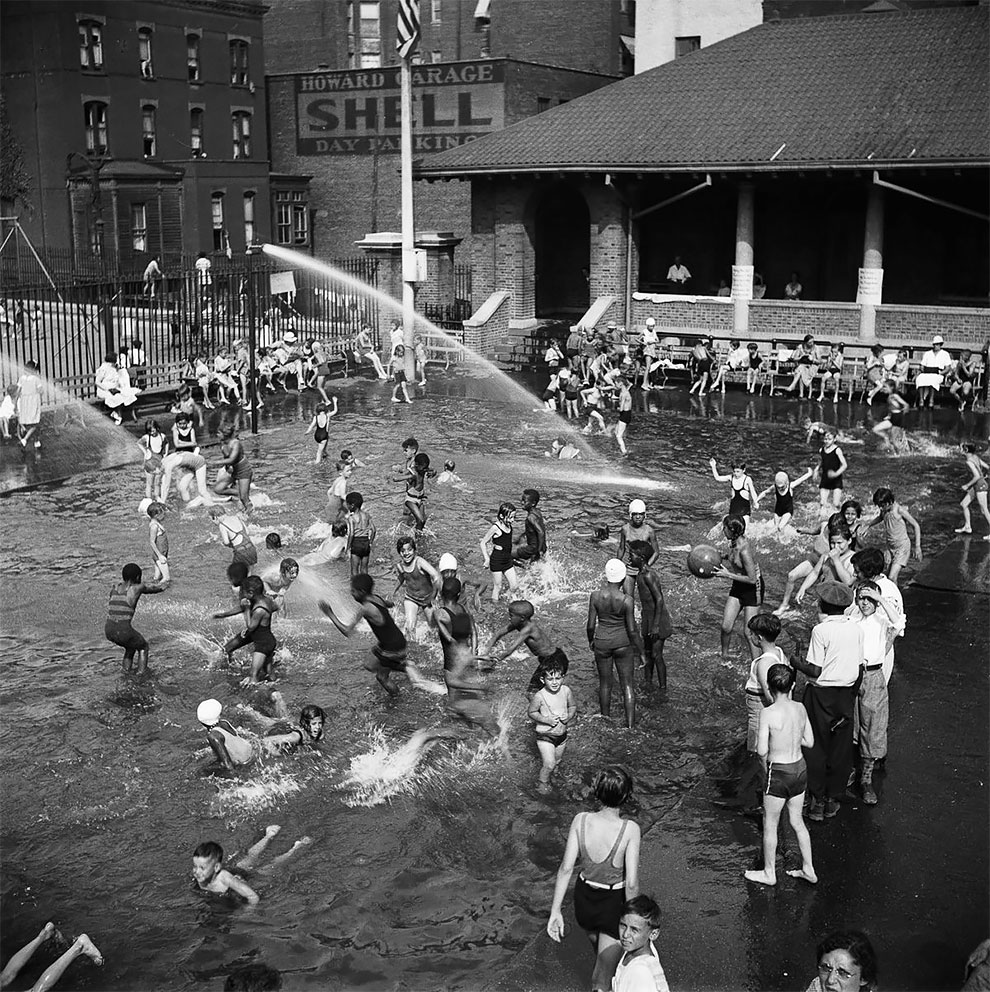 “As you swim,” wrote Anaïs Nin,“you are washed of all the excrescences of so-called civilization, which includes the incapacity to be happy under any circumstances.” Nin wrote that whilst taking the waters off in Acapulco, Mexico, in the winter of 1947. END_OF_DOCUMENT_TOKEN_TO_BE_REPLACED 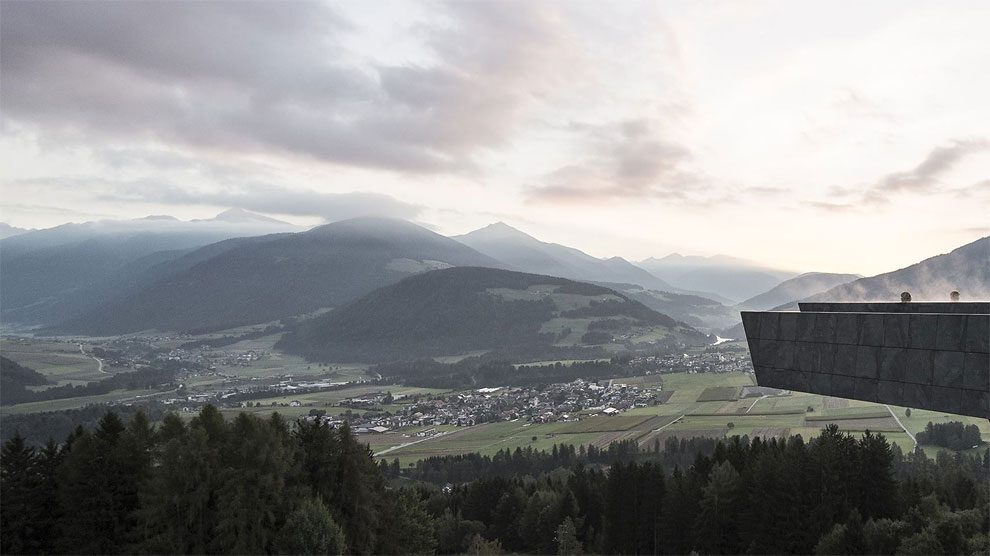 When noa* (network of architecture), were asked to re-design Hotel Hubertus that sits at the foot of a ski and hiking area in Valdaora, Italy, they included a new 82 foot (25m) swimming pool. The pool sits almost 40 feet (12m) above the ground and is located between the two accommodation wings of the hotel. The infinity edge pool allows guests to have uninterrupted views of the valley below and the mountains in the distance. The pool has been wrapped in anthracite-colored stone, almost making the pool blend into mountains that surround it. END_OF_DOCUMENT_TOKEN_TO_BE_REPLACED 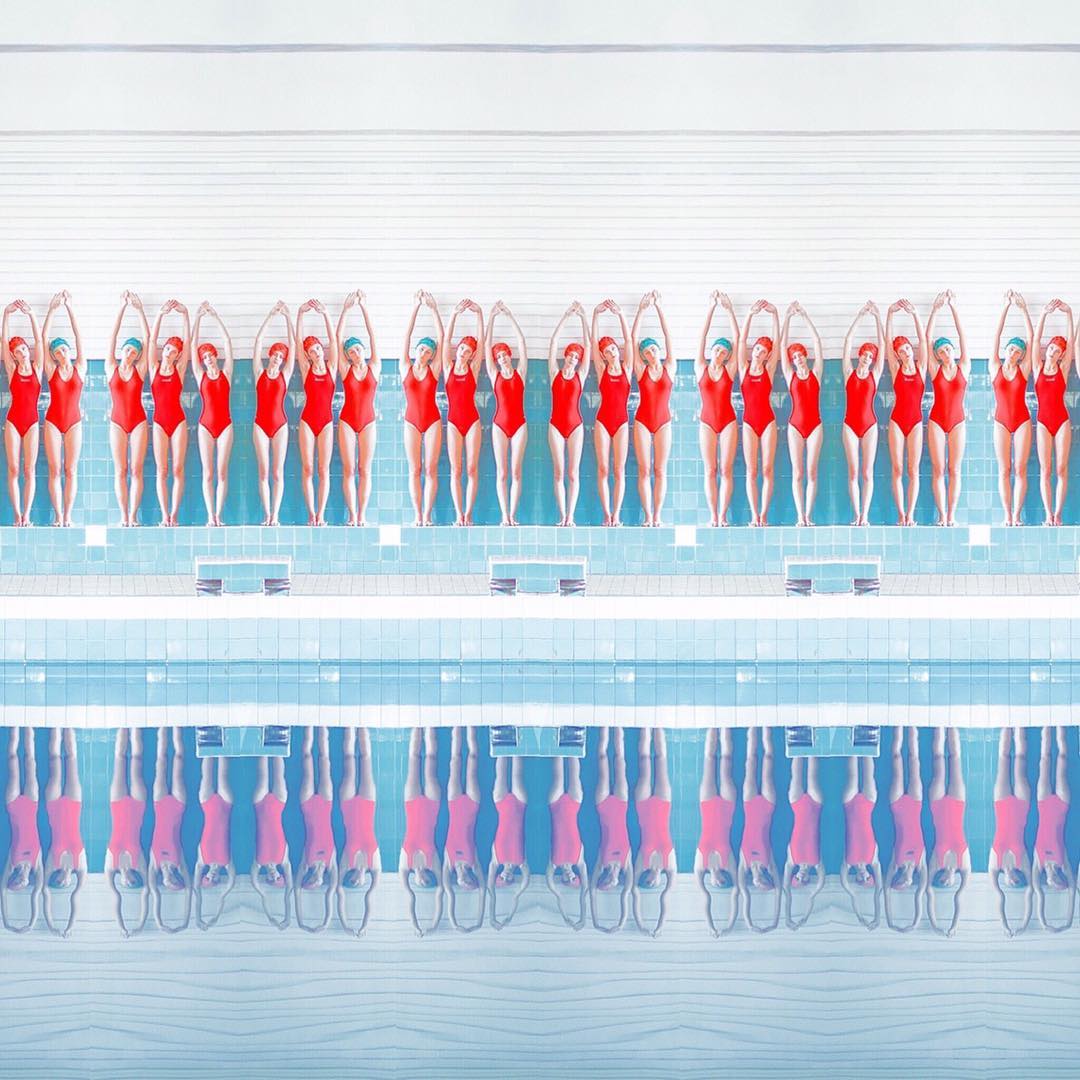 Photographer Maria Svarbova is fascinated by the sterile, geometric aesthetic of old swimming pools, especially those built during the Socialist Era in her native country of Slovakia. Each scene she photographs is highly controlled, from the subjects of her works to the bright colors and dramatic shadows that compose each shot. END_OF_DOCUMENT_TOKEN_TO_BE_REPLACED 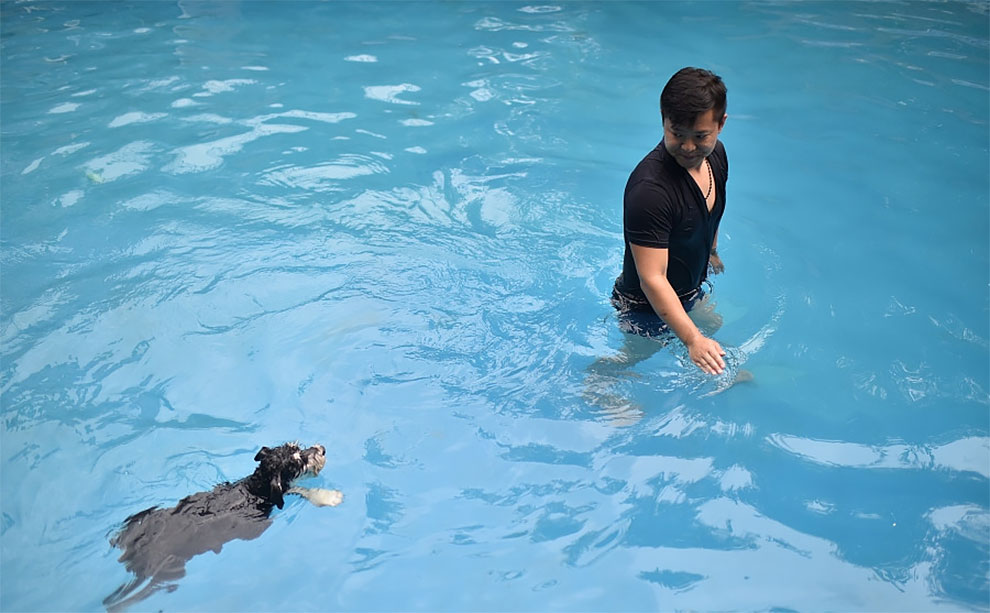 Wu Fangzhou, a man of the post-1980 generation, trains a dog to swim in a 2,000 square meters pool he built exclusively for dogs, in Chengdu, Southwest China’s Sichuan province. He built the pool to commemorate his beloved dog Qiuqiu, which died of heat stroke in the summer of 2015. During weekends, the swimming pool usually accommodates more than 20 dogs. END_OF_DOCUMENT_TOKEN_TO_BE_REPLACED 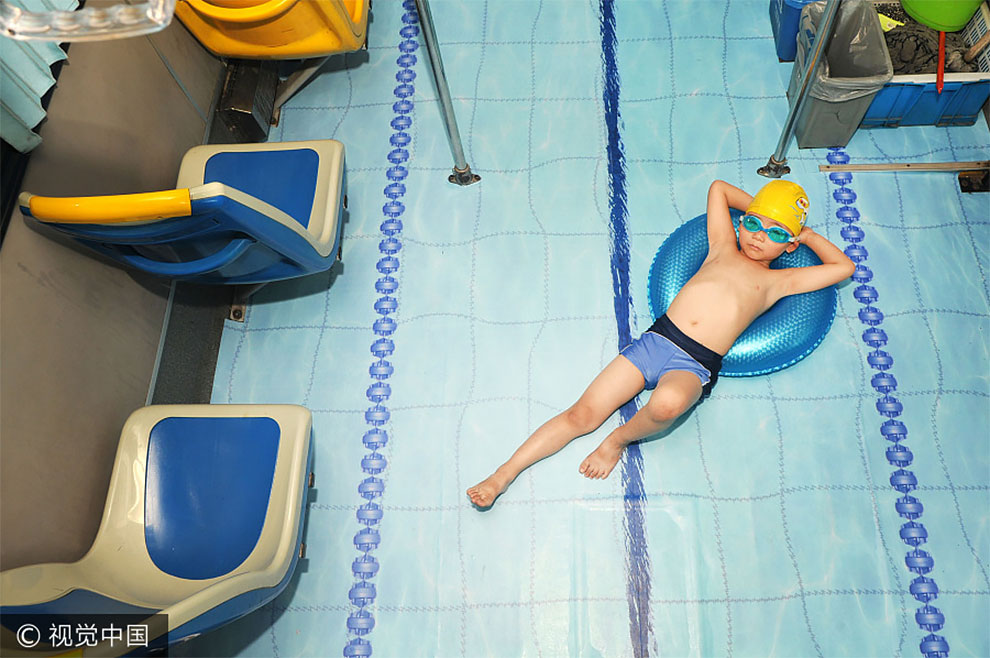 Watch this picture closely. Is that boy swimming on a bus? Well, don’t let the eye fool you. It’s just a novelty created by the bus drivers of Line 8 in Jinhua, Zhejiang province of China, by covering the buses with pool decals, making the passengers feel cool amid the heat wave in the city. END_OF_DOCUMENT_TOKEN_TO_BE_REPLACED 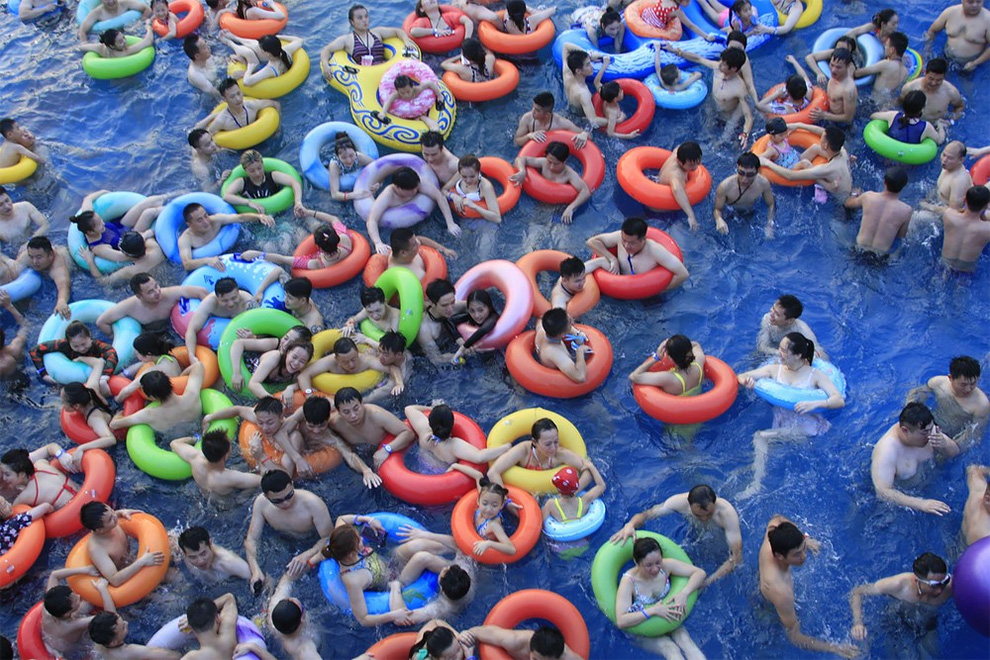 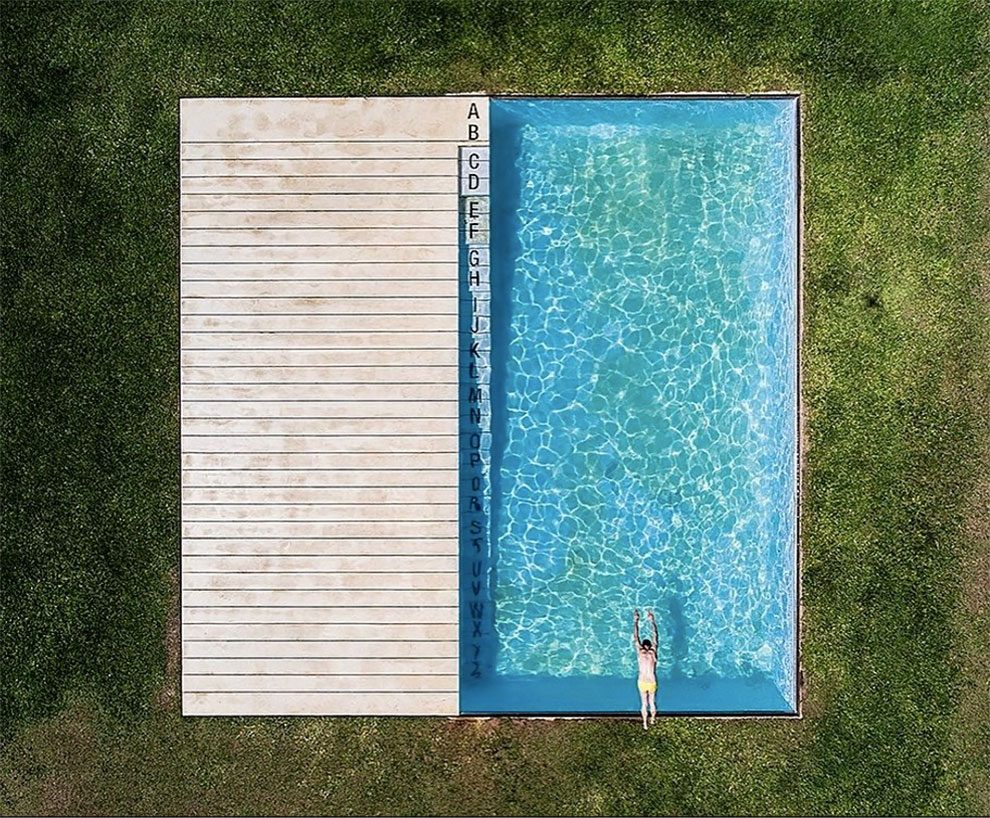 On display at the Brazilian modern art museum Inhotim (a giant botanical garden and outdoor gallery in the midst of the jungle). swimming pool by Jorge Macchi. END_OF_DOCUMENT_TOKEN_TO_BE_REPLACED 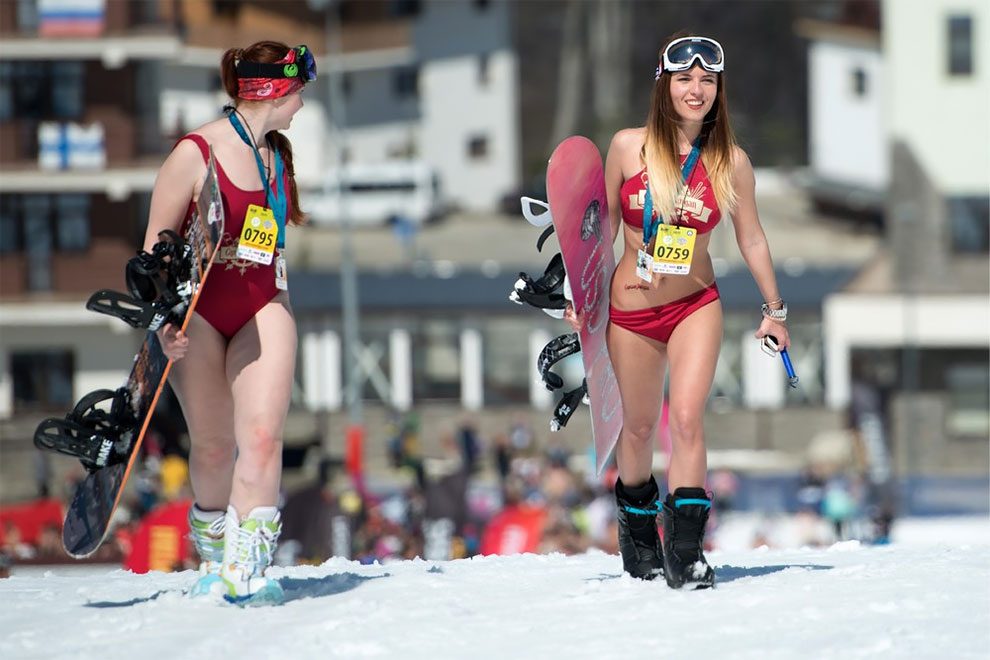 Thousands of skiers ditched their clothes for bikinis and trunks as they hit the slopes in Russia. The second annual alpine ski festival ‘BoogelWoogel’ is thought to have attracted 20,000 fans over the weekend. END_OF_DOCUMENT_TOKEN_TO_BE_REPLACED 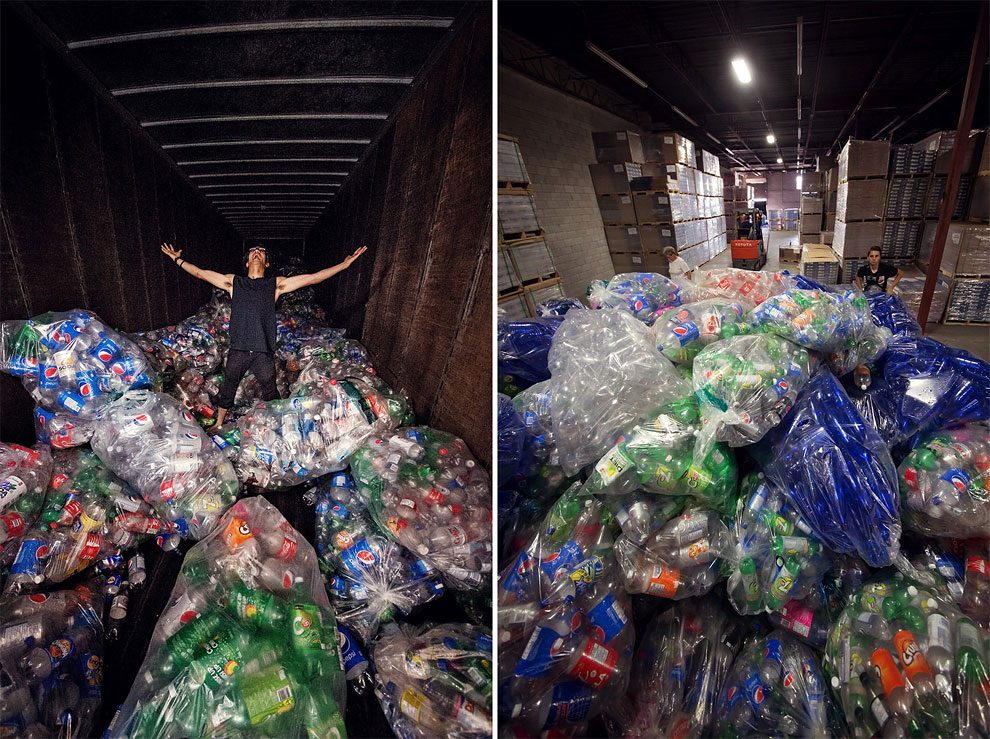 Montreal-based photographer Benjamin Von Wong put together an interesting project to try and raise awareness about pollution in the oceans. Von Wong used 10,000 plastic bottles and he placed them in a warehouse then had two beautiful mermaids attempt to swim through the collection and the photos are captivating. END_OF_DOCUMENT_TOKEN_TO_BE_REPLACED

Tundra collective has infilled the D Museum in Seoul with an immersive, interactive installation made up of thousands of luminous hexagonal cells. ‘My whale (inner revision)’ comprises a series of projectors that beam colored light onto a curved wall surrounding visitors, forming an audio-visual effect that brings the sounds of a whale to life. The patterns and accompanying sounds give viewers an experience akin to swimming alongside whales, encountering their vibrations and singing. END_OF_DOCUMENT_TOKEN_TO_BE_REPLACED 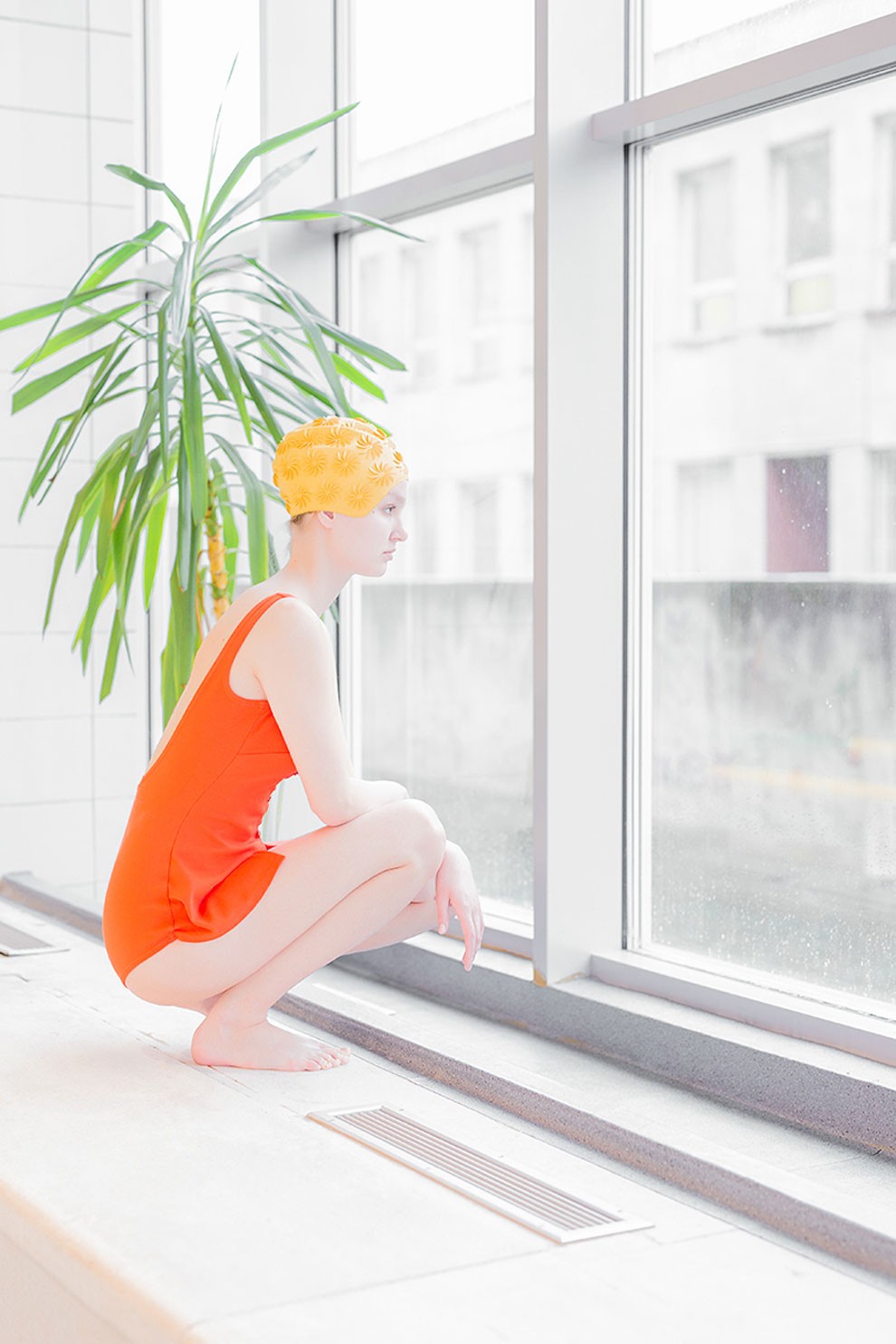 Slovak photographer Maria Svarbova, whom we presented the Human Space series few months ago, comes back with a new series titled ‘Swimming Pool’. Artist transports us in a swimming pool in Bratislava where she photographs models with attitudes and poses are close to the ones of characters in a painting. This aspect is accentuated by the retouching of the pictures. END_OF_DOCUMENT_TOKEN_TO_BE_REPLACED 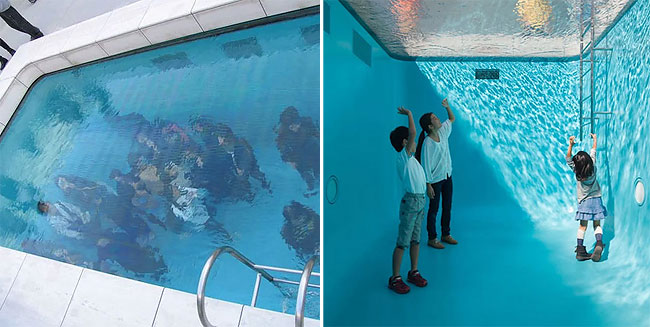 Argentinian artist Leandro Erlich created an illusory swimming pool that seems to be filled with water. Installed as a permanent exhibit at the 21st Century Museum of Contemporary Art in Kanazawa, Japan, the water in the pool is actually only 10cm shallow, supported by a thick layer of transparent glass. END_OF_DOCUMENT_TOKEN_TO_BE_REPLACED

Sushi is delicious, and koi-fish are amazing, so why not join the two into an amazing and delicious combination? That’s what JunsKitchen has achieved in their short video on how to make sushi that looks like real-life swimming koi fish. END_OF_DOCUMENT_TOKEN_TO_BE_REPLACED 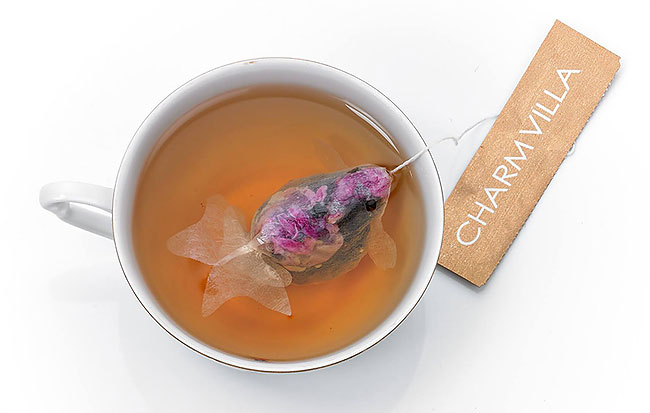 Taiwan-based creative agency Charm Villa, have designed some limited edition tea bags in the shape of a goldfish. END_OF_DOCUMENT_TOKEN_TO_BE_REPLACED 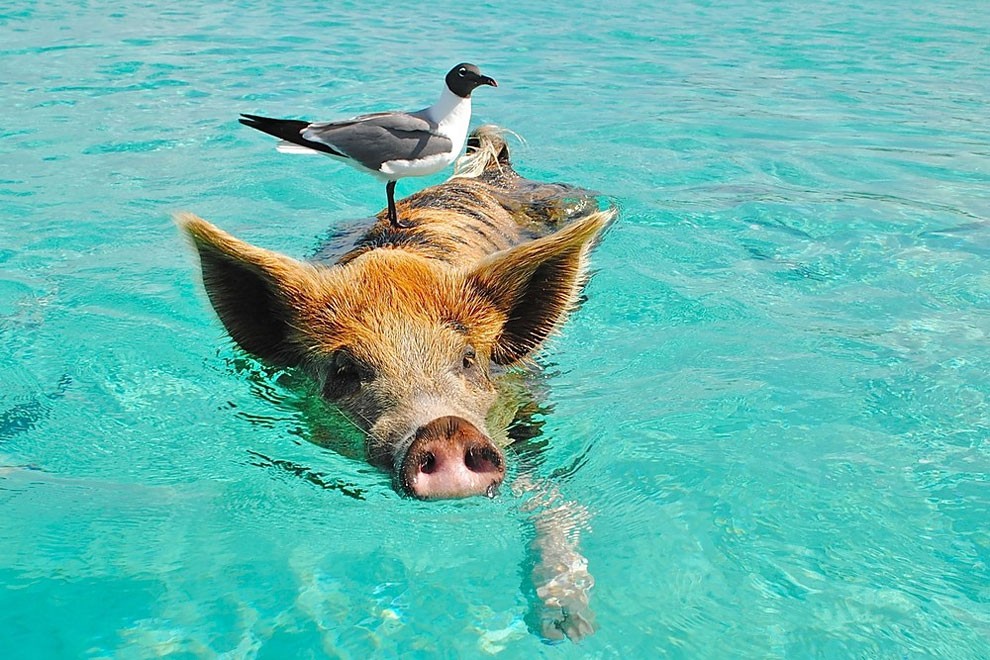 The Bahamas, the Commonwealth nation of hundreds of islands roughly the size of Connecticut and with population of just a bit over Anaheim, is known for its crystal waters and pristine beaches. This is possibly one of the world’s most beautiful havens of nature, yet people are coming here to see pigs. It is unclear when the pigs first appeared on Exuma Island or where they come from. There’s talk about a daring escape from a shipwreck, or sailors releasing the swine on purpose. In all probability, there were no pigs on this tropical paradise before European settlers came, so their mere presence is the work of human. The intriguing feat of nature, however, is that this population of pigs developed a fine aptitude for swimming. Here: “Hey, gull, I’m not a ferry! Ok, maybe I am”. (Photo and caption by Lisa Larsen/Petr Svab via The Epoch Times/Public Domain) END_OF_DOCUMENT_TOKEN_TO_BE_REPLACED

The Beauty Of Finnish Winter Swimming 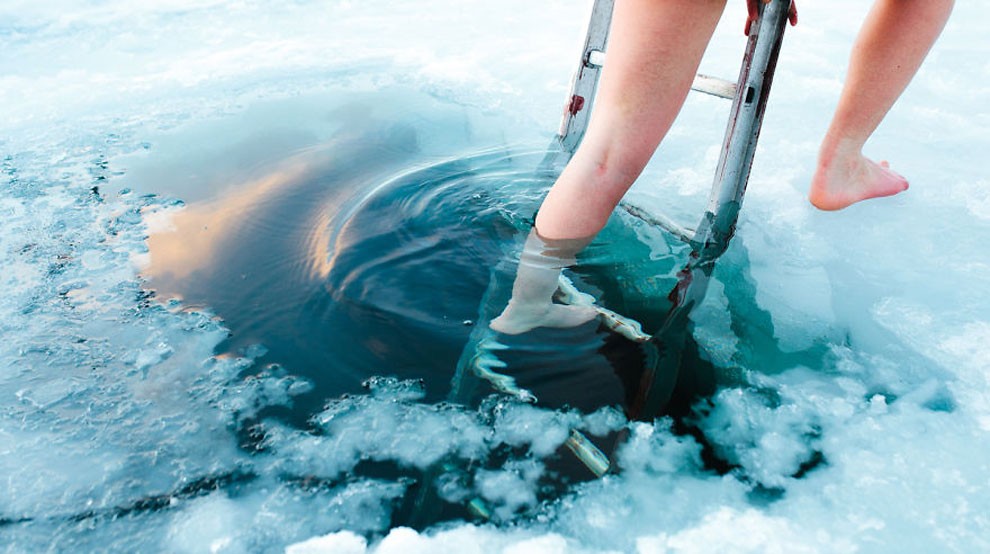 “Swimming in 4 degrees celsius water in the middle of winter is an old tradition in Finland. I created this short series of photos to show the beauty of the sport. Winter swimming is not only good for your your health but also a great way to clear your mind from trouble and stress. This will be an on going project that I will continue next winter.” – Konsta Linkola. END_OF_DOCUMENT_TOKEN_TO_BE_REPLACED 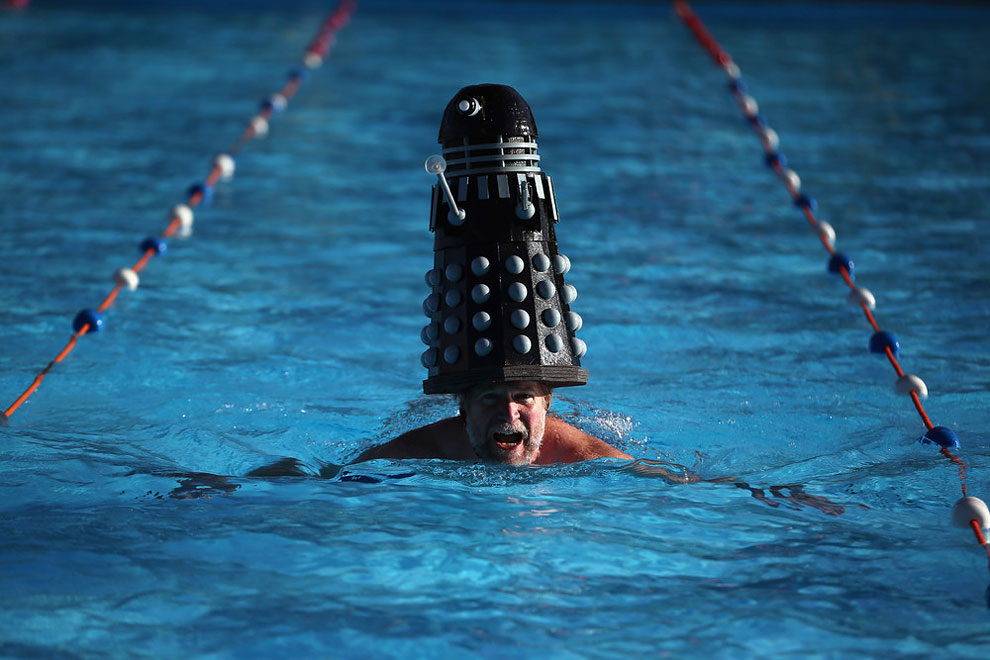 A competitor with a Dalek on his head takes part in the annual UK Cold Water Swimming Championships at Tooting Bec Lido on January 24, 2015 in London, England. Participants from around the world brave the cold water to compete in a selection of different swimming races. (Photo by Dan Kitwood/Getty Images)
END_OF_DOCUMENT_TOKEN_TO_BE_REPLACED

A swimmer reacts after finishing his competition in a pool carved into thick ice covering the Songhua River during the Harbin Ice Swimming Competition in the northern city of Harbin, Heilongjiang province January 5, 2015. The swimming competition was held on the official launch day of the Harbin International Ice and Snow Sculpture Festival. (Photo by Kim Kyung-Hoon/Reuters)
END_OF_DOCUMENT_TOKEN_TO_BE_REPLACED 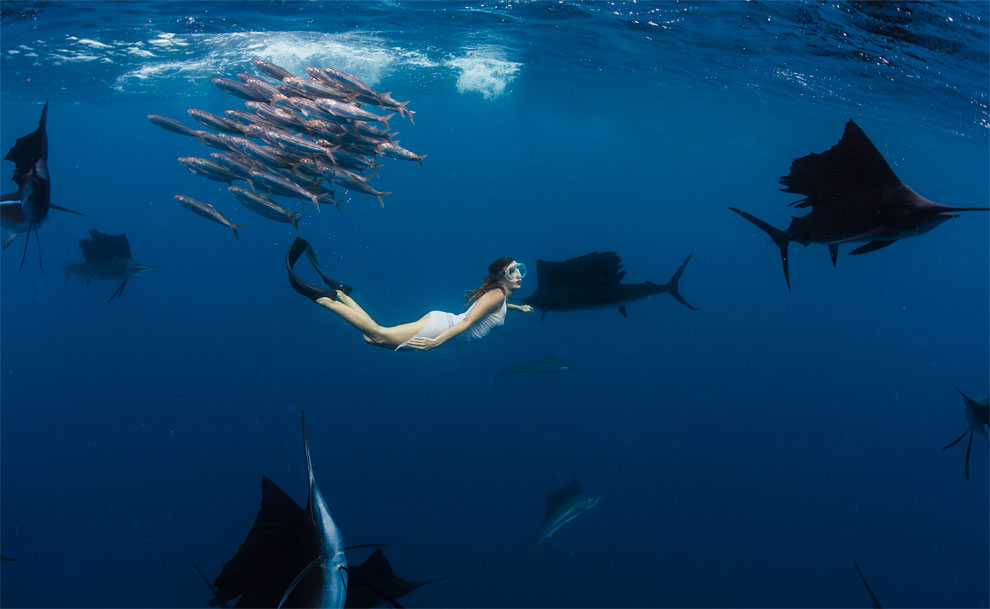 A female skydiver swims with whale sharks, manta rays and sailfish – the fastest fish in the sea. Model, skydiver and wing-suit jumper Roberta Mancino jumped from a boat into the ocean surrounding Isla Mujeres near the northern Peninsula of Mexico. The incredible project involved two trips to the stormy winter seas – one in February 2013 and one a year later in February 2014. Photos by Shawn Heinrichs. END_OF_DOCUMENT_TOKEN_TO_BE_REPLACED 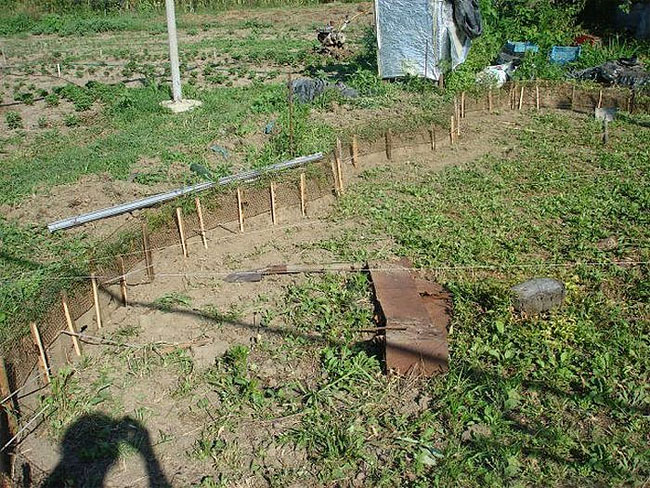 These people decided to build their own swimming pool and it ended up looking a lot cooler than any swimming pool they could have purchased. END_OF_DOCUMENT_TOKEN_TO_BE_REPLACED

Daredevil Christopher Gillette writhes around with a huge alligator he has saved from death. He works at a Florida sanctuary that rescues the wild beasts if they stroll into neighbourhoods where residents can legally kill them. To raise cash for the centre at Homestead, staff put on shows to feed and wrestle the alligators. Photographer John Chapa, 41, and girlfriend Adriana Canargo, 30, took these shots.

He said: “Gators only eat once a week and are placid. They know what is and is not food but they are in no regard tame – you cannot tame a gator. If a gator shows up at somebody’s house or at a BBQ or anywhere else in the state of Florida more than a couple of times then the state will deem it a nuisance. There are around 7,000 nuisance alligators reported each year and legally people can then just go out and kill that animal. Chris and Ashley will then try to rescue it by hand to avoid hurting it. It’s a completely non-profit organisation – they do it all just to save the animals”. 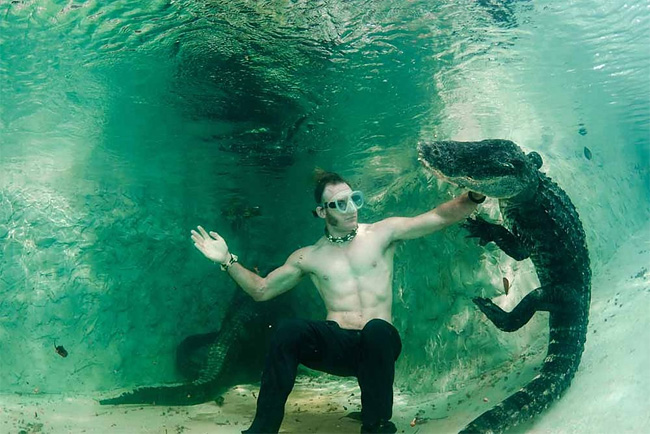 Underwater photographer John Chapa gets up close with a wild alligator on his first ever dive with the animals. (Photo by John Chapa/Barcroft Media)
END_OF_DOCUMENT_TOKEN_TO_BE_REPLACED 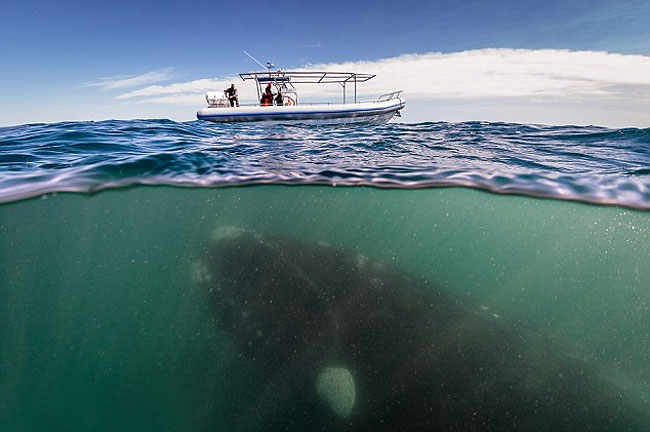 A group of wildlife watchers scan the open ocean for activity – as a huge whale drifts just below them. These amazing images show a 50-tonne southern right whale and its calves swim within touching distance of a small tourist vessel and its crew. The massive mammal dwarfs the boat and could easily crush it with one swipe of its 15ft tail.

But according to wildlife photographer Justin Hofman – the family seemed more intent on making friends. He said: “Being in the water with a whale is the most humbling experience I’ve ever had underwater… Not only are these animals massive, but they are long-lived, intelligent, cultural beings… Swimming along with a curious right whale calf was nerve-racking. At any moment I thought ‘mom’ was eventually going to get annoyed with me and swat me with her 15ft tail – and I’d be a goner.” END_OF_DOCUMENT_TOKEN_TO_BE_REPLACED 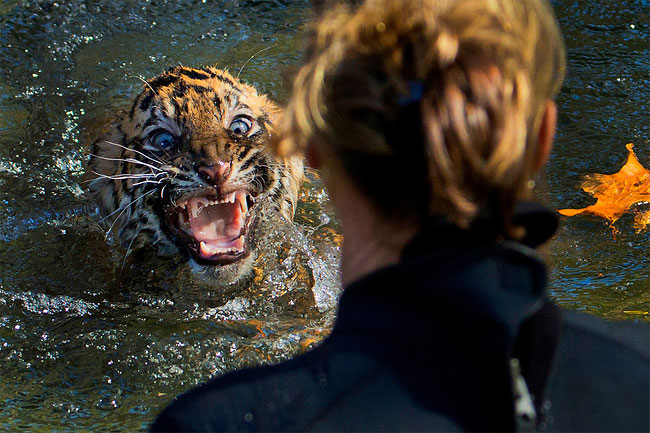 A three-month-old Sumatran tiger cub named “Bandar” reacts after being dunked in the tiger exhibit moat for a swimming test at the National Zoo in Washington, Wednesday, Nov. 6, 2013. All cubs born at the zoo must take a swim test before being allowed to roam in the exhibit. Bandar passed his test. (AP Photo/Manuel Balce Ceneta, File) END_OF_DOCUMENT_TOKEN_TO_BE_REPLACED 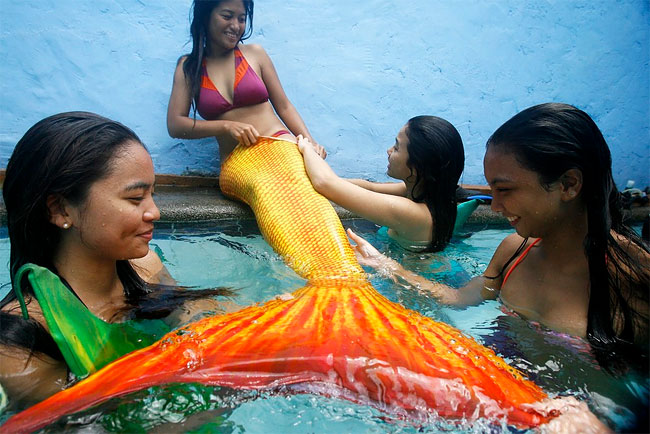 Filipino mermaid swimming teacher Genevieve Reyes (C) has her tail adjusted by students during a lesson by the Philippines Mermaid Swimming Academy in a private swimming pool in Makati, Manila, Philippines, 15 June 2013. The Philippine Mermaid Swimming Academy (PMSA) was created in 2012 in Boracay by Normeth Preglo of The Philippines and US swimming instructor Djuna Rocha. The swimming lessons were brought to Manila in April 2013. The price for a two-hour class is 37 US dollars. Photos by Dennis M. Sabangan/EPA. END_OF_DOCUMENT_TOKEN_TO_BE_REPLACED 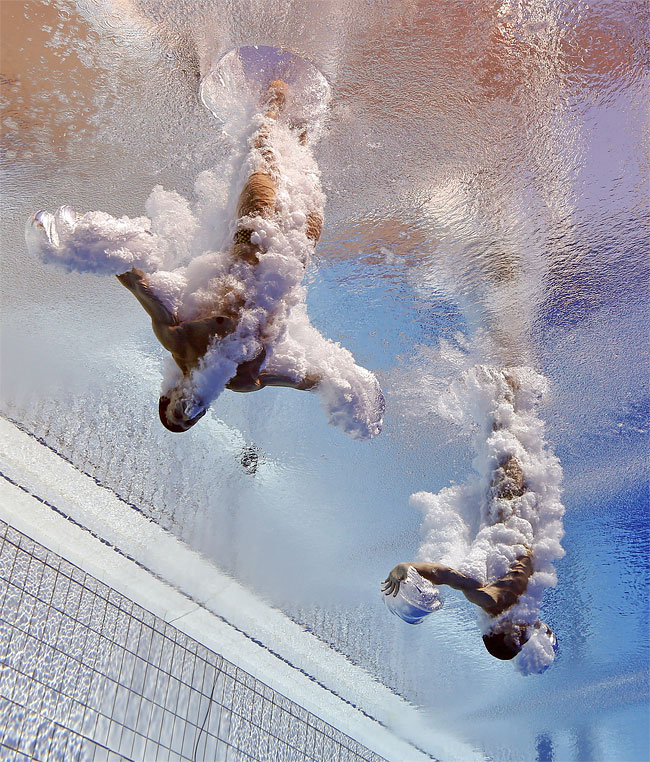