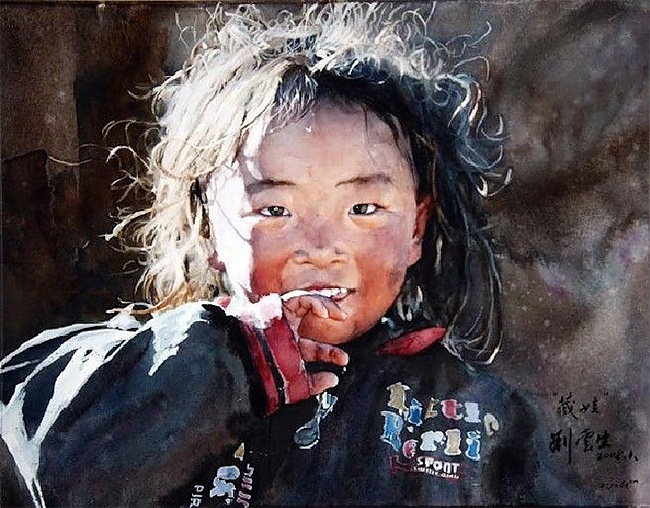 Chinese artist Liu Yungsheng is one of the leading watercolor painters of his generation. Making use of inherited traditional techniques, Yungsheng creates hyperrealistic portraits that convey a trademark observational style. Each depiction seems more photograph than painting, as Yungsheng’s portraits seem to come alive by capturing his subjects, down to the smallest detail. END_OF_DOCUMENT_TOKEN_TO_BE_REPLACED 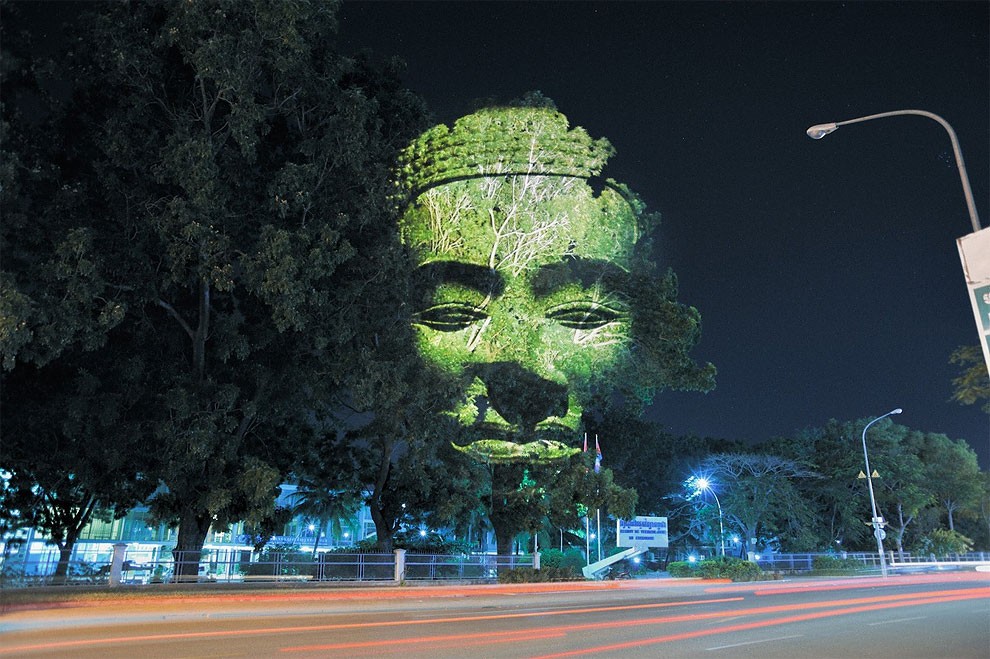 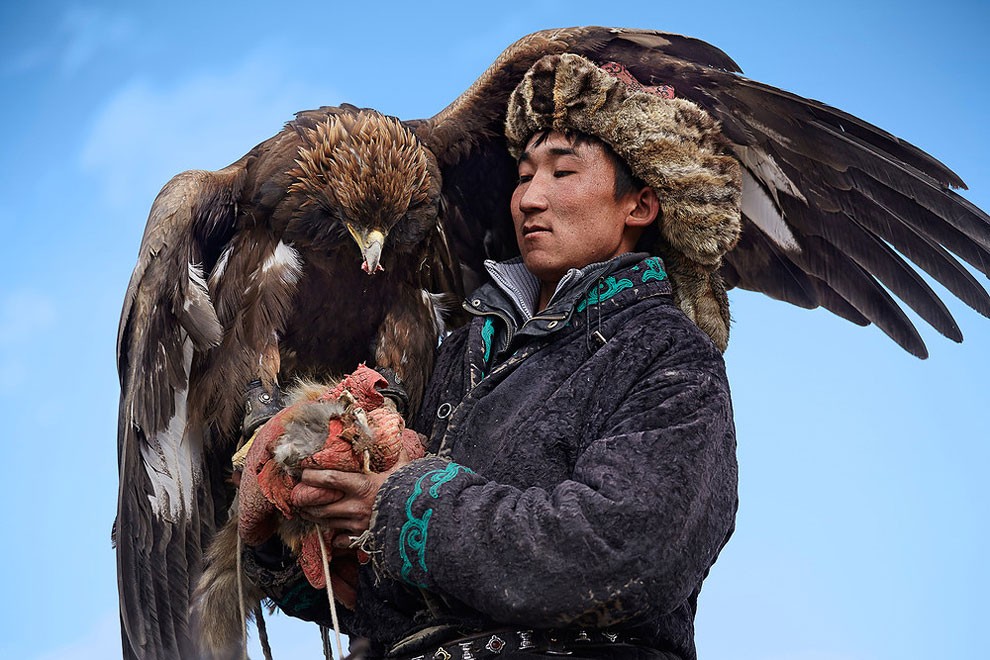 In one of the planet’s most desolate and harsh terrains, the Altai Mountains which run from Siberia in Russia down to Mongolia’s Gobi Desert, hunting with eagles is currently only practiced by a handful of Kyrgyz and Kazakhs (previously). This form of falconry, the practice of hunting with the aid of birds of prey, can be traced back as far as 4,000 years in Central Asia. Since 2014, after leaving a senior corporate job and wanting to document remote cultures around the world, photographer Tariq Zaidi has been photographing the Kazakh eagle hunters. For Kazakhs living in western Mongolia, hunting with eagles is a proud art, and one of the highest expressions of their cultural heritage. Today, the art is slowly dying out, as there are only about 70 traditional eagle hunters left in the world. For these remaining few, it is not simply an important tradition or an extraordinary sport; it is their reason to live. Here: after a successful hunt, a proud hunter rewards his eagle by feeding it the lungs of the prey, which is considered the most highly prized part of the animal. (Photo by Tariq Zaidi/The Washington Post)
END_OF_DOCUMENT_TOKEN_TO_BE_REPLACED 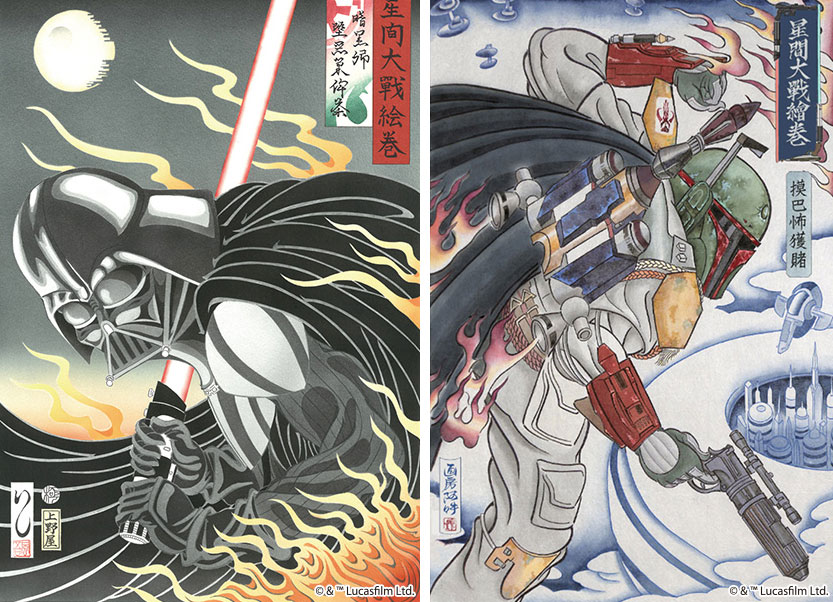 To Transpose the mythical universe of the Star Wars saga in Japanese prints, that’s the great idea launched by the Japanese crowdfunding website Makuake. END_OF_DOCUMENT_TOKEN_TO_BE_REPLACED 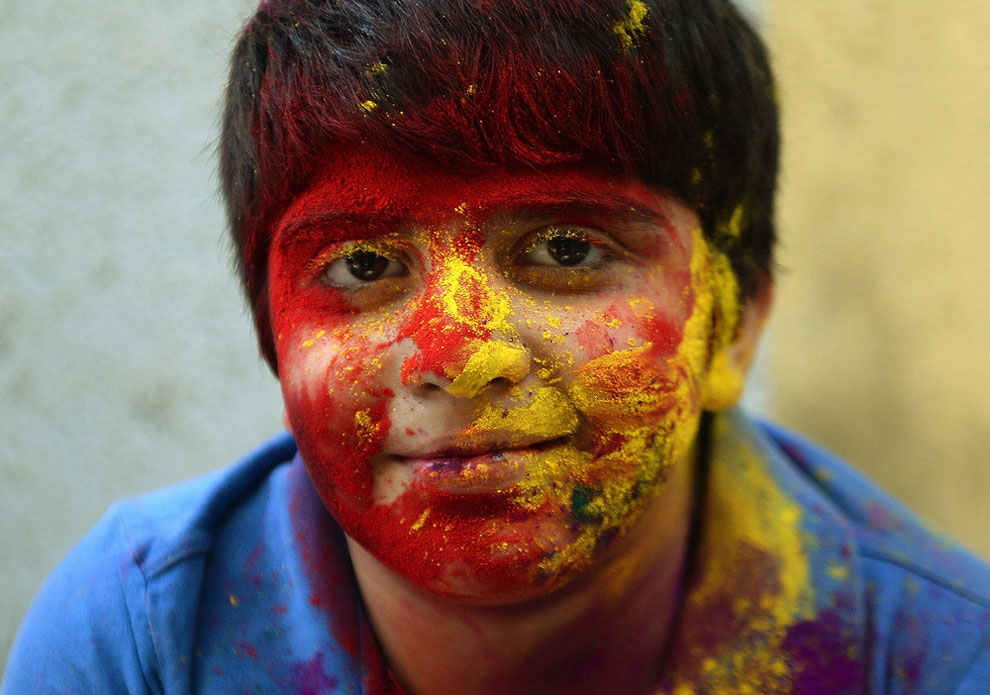 A physically challenged Indian child, smeared with gulal-coloured powder, smiles at the camera during Holi celebrations at the Society for the Edcuation of the Crippled school in Mumbai on March 4, 2015. ‘Holi’, the festival of colours, is a riotous celebration of the coming of spring and falls on the day after full moon annually in March. Revellers spray coloured powder and water on each other with great gusto, whilst adults extend the hand of peace. AFP PHOTO / PUNIT PARANJPE (PUNIT PARANJPE/AFP/Getty Images)
END_OF_DOCUMENT_TOKEN_TO_BE_REPLACED 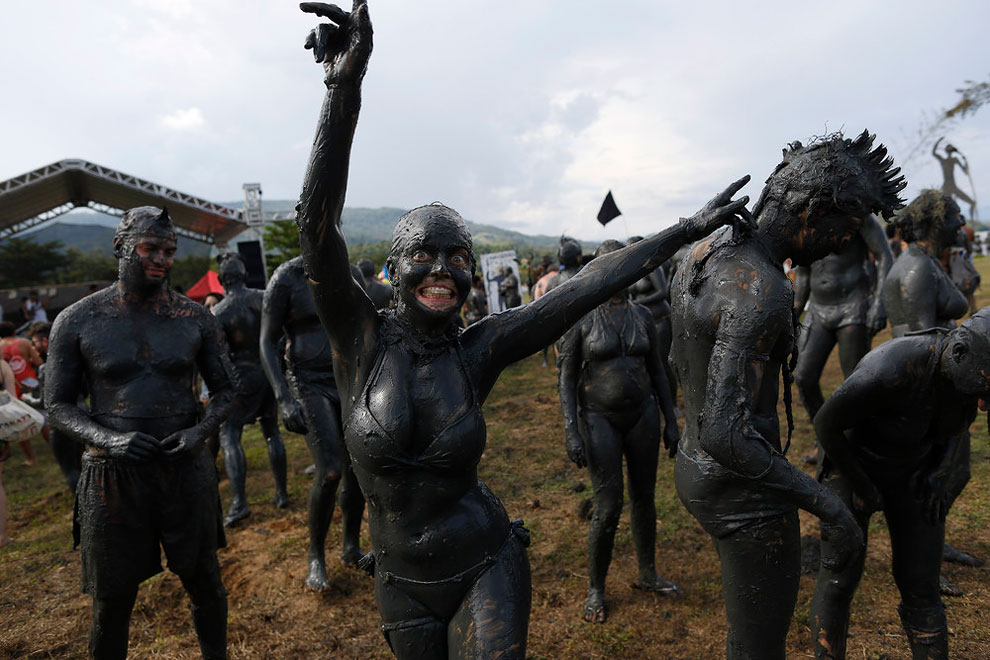 A woman, covered in mud, dances during the traditional “Bloco da Lama” or “Mud Block” carnival party, in Paraty, Brazil, Saturday, February 14, 2015. Revelers in the seaside colonial town threw themselves into deposits of black, mineral-rich slime, emerging covered head-to-toe in the sludge. Bikinis and trunks disappeared beneath the mud, which highlights both gym-pumped pectorals and beer-fed guts. (Photo by Leo Correa/AP Photo)
END_OF_DOCUMENT_TOKEN_TO_BE_REPLACED 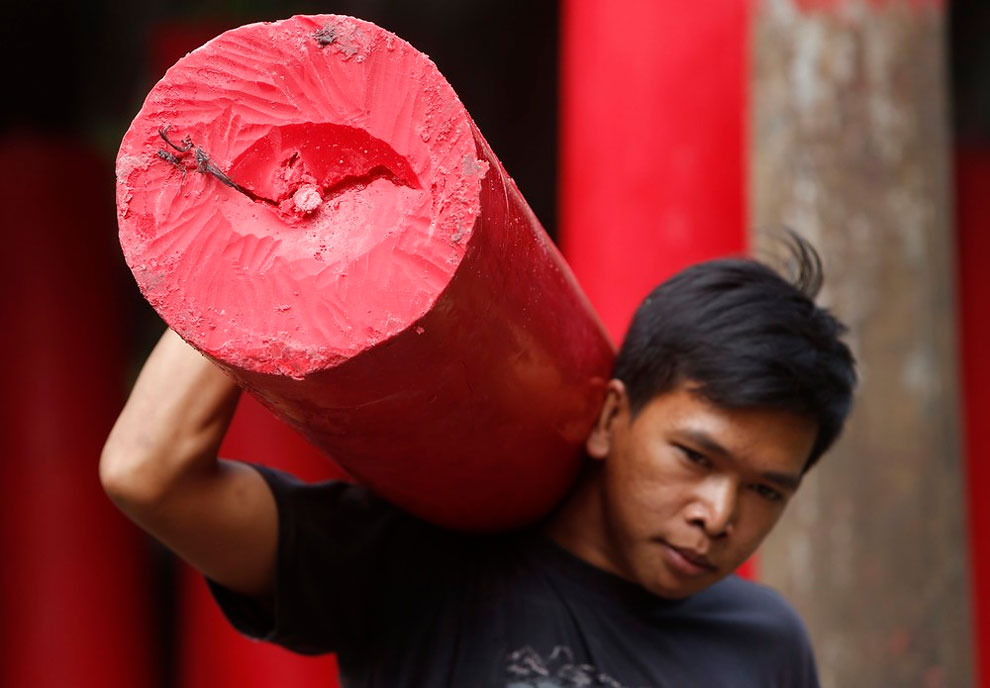 An Indonesian worker carries a giant candle at a traditional Chinese candle maker for the upcoming Lunar New Year in Bogor, Indonesia, 27 January 2015. The Chinese Lunar New Year, known here as Imlek, is only three weeks away. The whole city is getting decked out to celebrate the event on 19 February 2015. (Photo by Adi Weda/EPA)
END_OF_DOCUMENT_TOKEN_TO_BE_REPLACED

Most of people who have visited Bali have seen the cockfighting popular among the locals. A little-known but no less ardent hobby among Bali’s farming community is cricket fighting, or mejangkrikang. The insects face off inside bamboo tubes known as bumbung, and bets are placed on the bouts, which typically last two minutes. Indonesia, as well as other countries in the Southeast Asia region. In China, cricket fighting even has a very long history, dating back almost 1,000 years to the famous Tang Dynasty in the 12th century. The fights have quite strict rules: The fighters must be of similar body size and in a healthy condition, meaning that all the body organs were complete. When all the fight requirements are met, the two competing crickets face off against each other in a fierce fight on bamboo tubes called Bumbung. Two men must stand by to increase crickets fighting drive on Bumbung used steams of grass during the tournament. The cricket that survives and can make the opponent surrender that is marked by the cricket run to the glass of bombing is declared as the champion. Meanwhile, the game will not be fun if there is no betting. Bets depend of the owners. But, for this small miniature blood sport, the owners usually place bets of between Rp 100,000 and Rp 200,000 ($7.86-15.71) per 2 minutes game. Here: two Balinese men used steams of grass to increase crickets fighting drive on Bumbung during the tournament. (Photo by A. A. Gde Agung/JG Photo)
END_OF_DOCUMENT_TOKEN_TO_BE_REPLACED 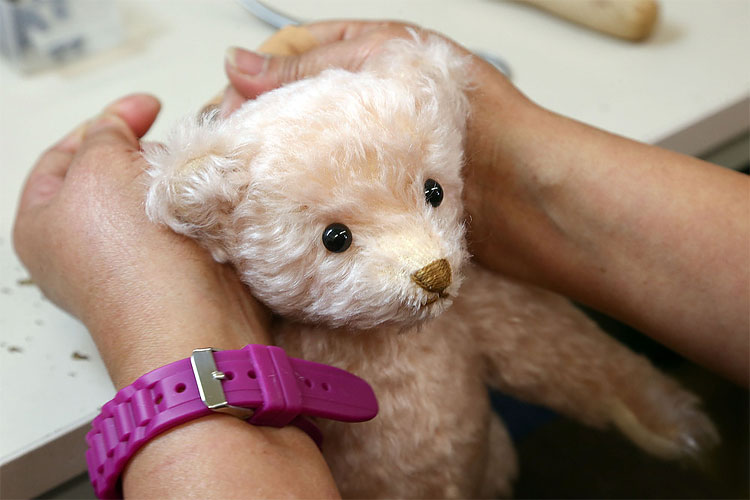 A teddy bear is completed at the Steiff stuffed toy factory on November 23, 2012 in Giengen an der Brenz, Germany. Founded by seamstress Margarethe Steiff in 1880, Steiff has been making stuffed teddy bears since the early 20th century ever since her nephew Richard Steiff exhibited the first commercially produced teddy bear in Europe in 1903. Teddy bears are among the most popular children’s toys and the company is hoping for a strong Christmas season. In photographs by Thomas Niedermueller. END_OF_DOCUMENT_TOKEN_TO_BE_REPLACED 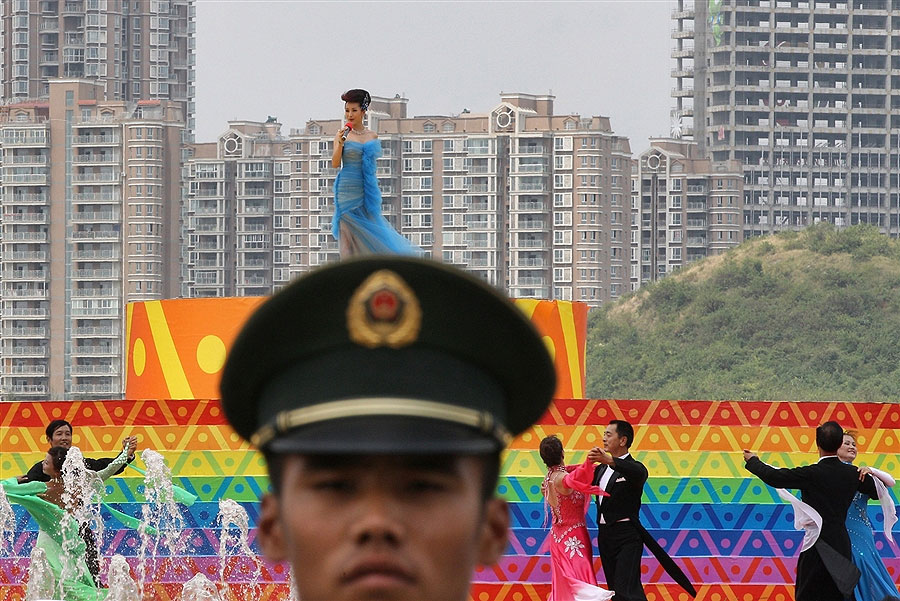 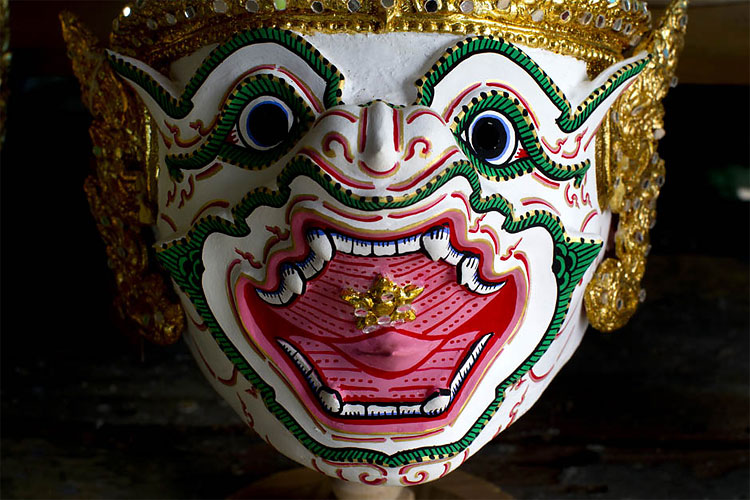 A close up of a Khon mask July 8, 2011 in Angthong, Thailand. The paper mache Khon masks, are part of the ornate glittering costumes used in the stylized classical Thai dance form known as Khon. Prateep sells his handmade masks for $50-120 US, it can take around 10 days to make one. The Khon tradition was originally imported from India around the 10th century. The painted Khon masks are essential to conveying the characters and moods of a Khon performance. Often the masks are used as decorative objects displayed in many homes and in many Thai restaurants globally. (Paula Bronstein/Getty Images) END_OF_DOCUMENT_TOKEN_TO_BE_REPLACED