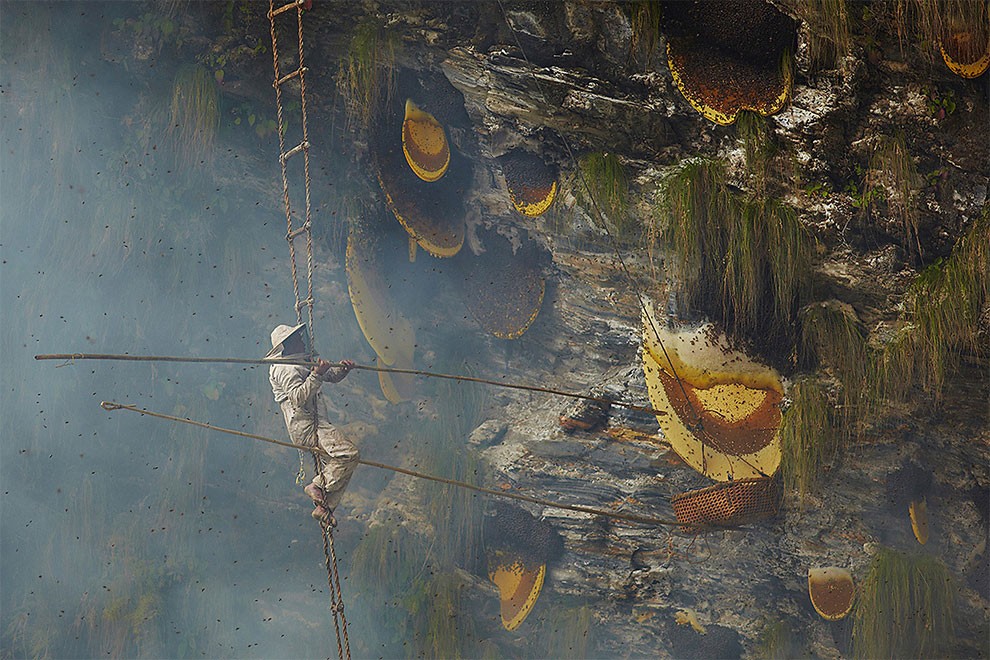 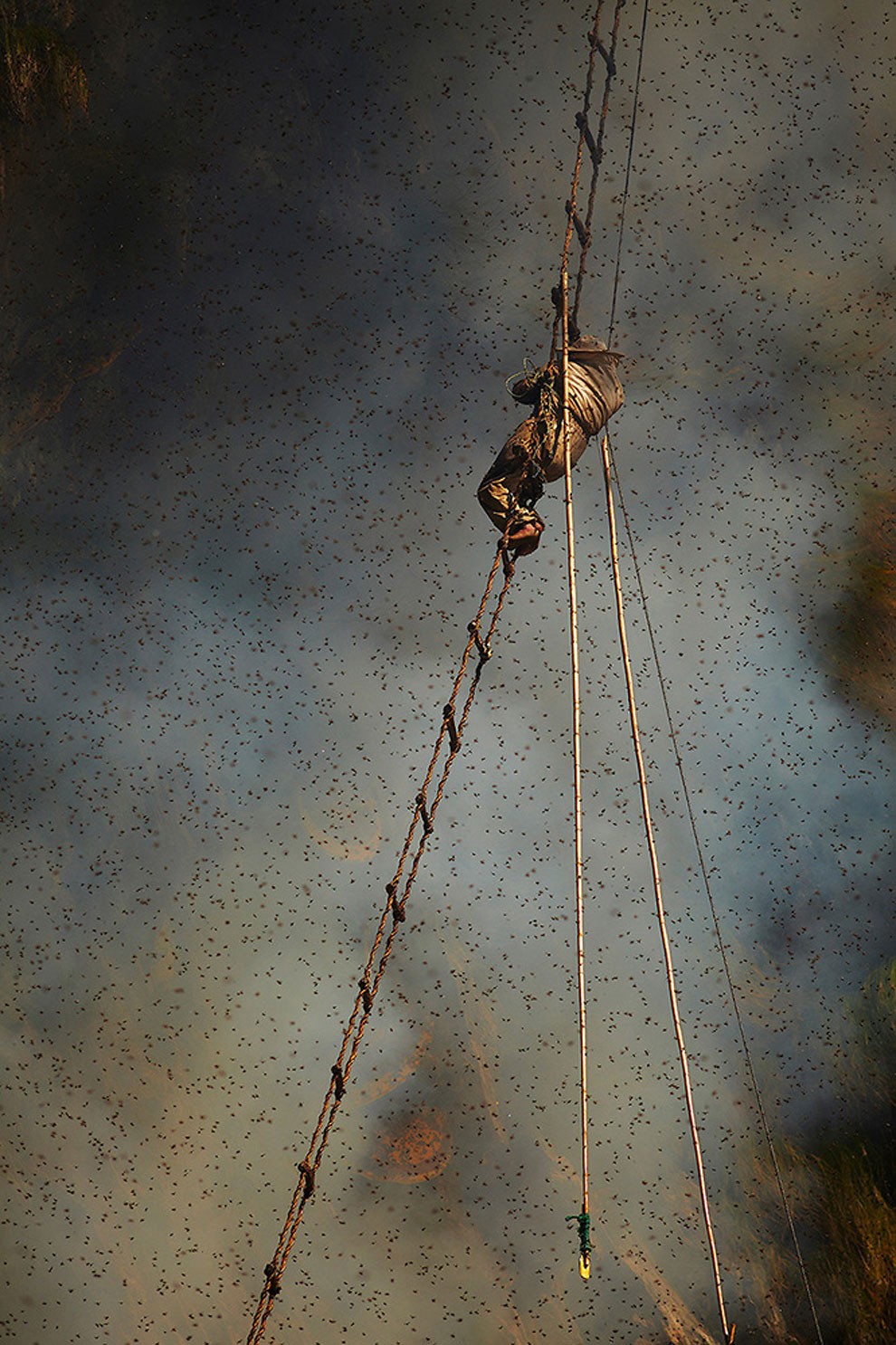 Twice a year, the Gurung honey hunters ascend to the base of cliffs in central Nepal and ascend them to collect honey. They use the same tools that their ancestors did – hand-woven rope ladders and tangos, the long sharp bamboo poles that they use to cut the honey-filled hives off of the face of the cliff and drop them into baskets waiting below. 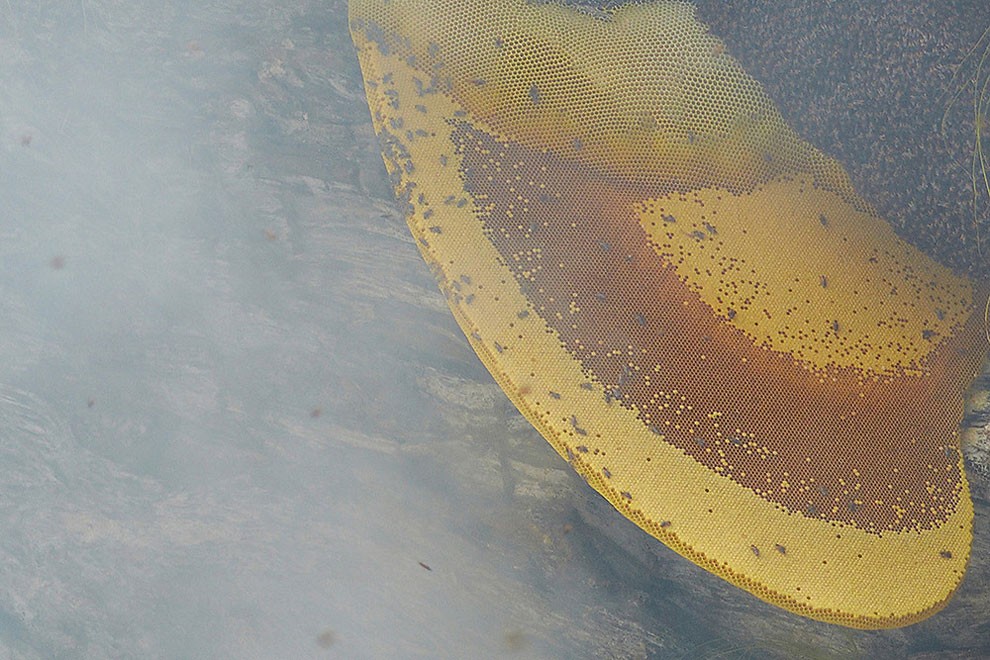 After lighting smoke fires at the base of the cliff to smoke out the bees, they climb their ladders and collect their honey. 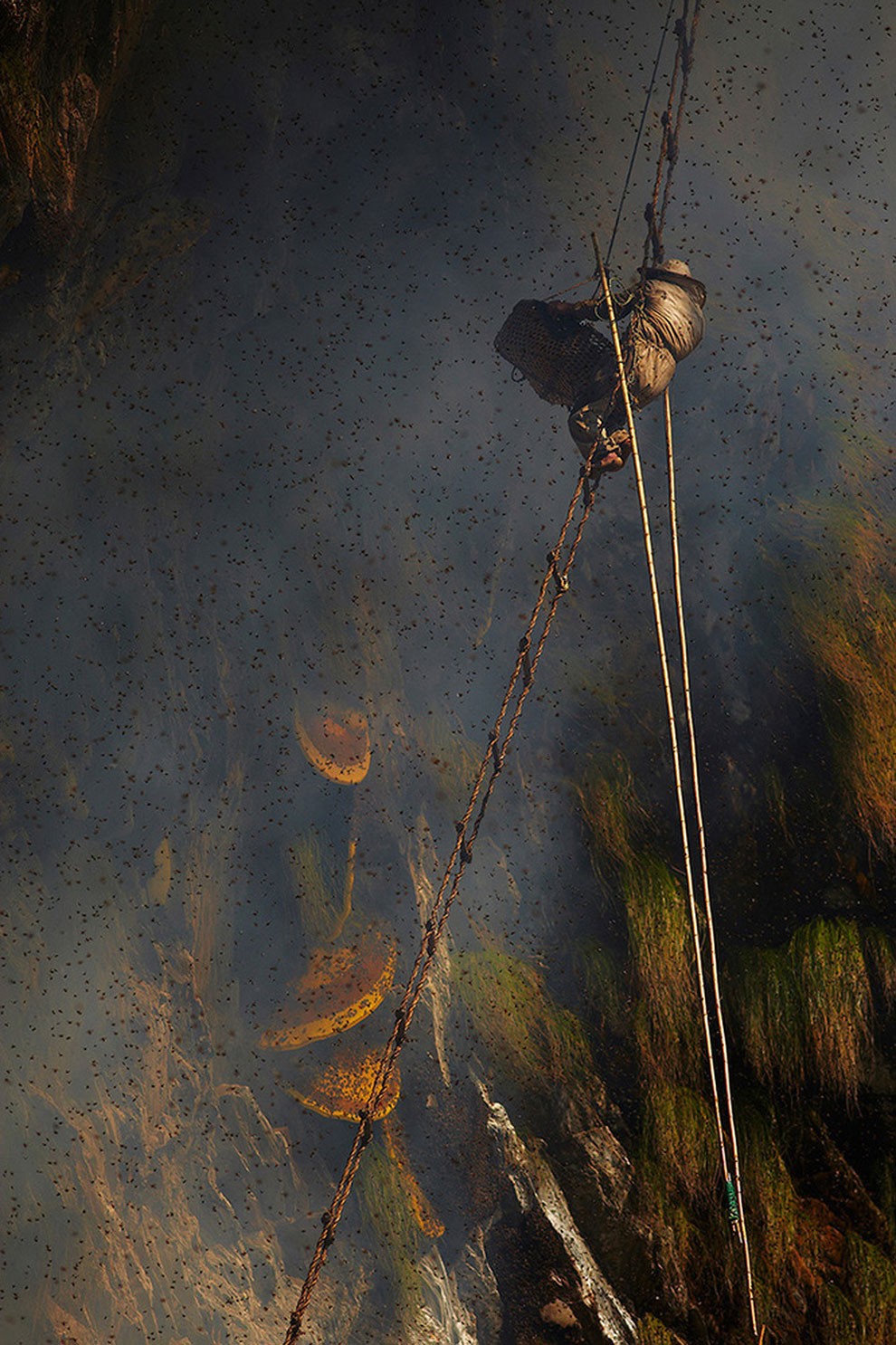 Besides the danger of falling, they also happen to be harvesting the honey of the largest honeybee in the world. The Himalayan honey bee can grow to be up to 3 cm (1.2 in) in length. Due to grayanotoxins from the white rhododendrons they feed on in the spring, their spring honey can be intoxicating, and fetches high prices in Japan, Korea and China. 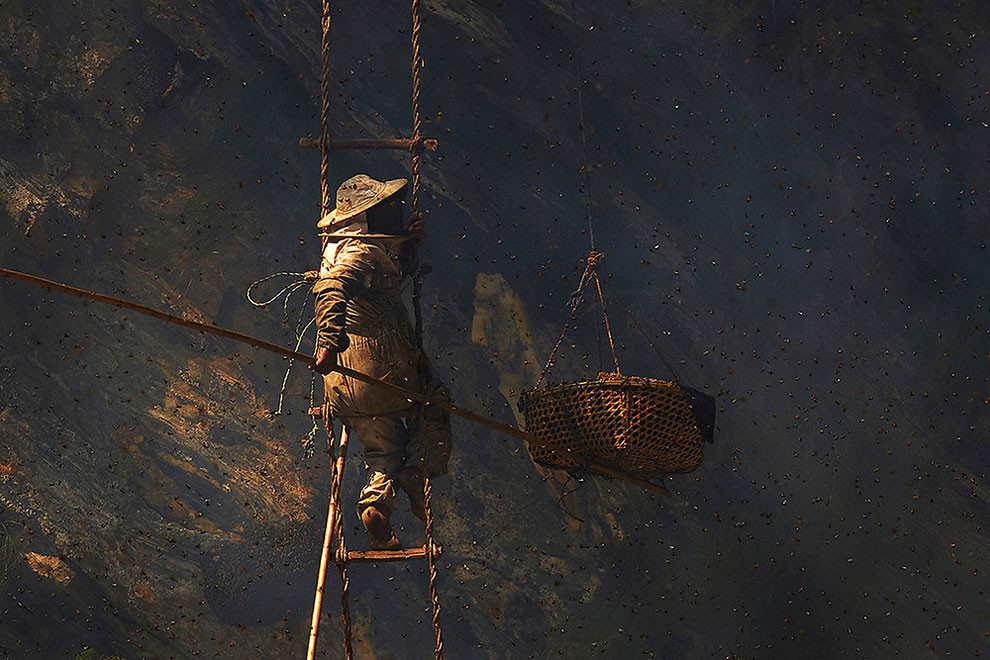 The open cliff-face hives help protect the bees from predators and keeps them warm by exposing them to sunlight. 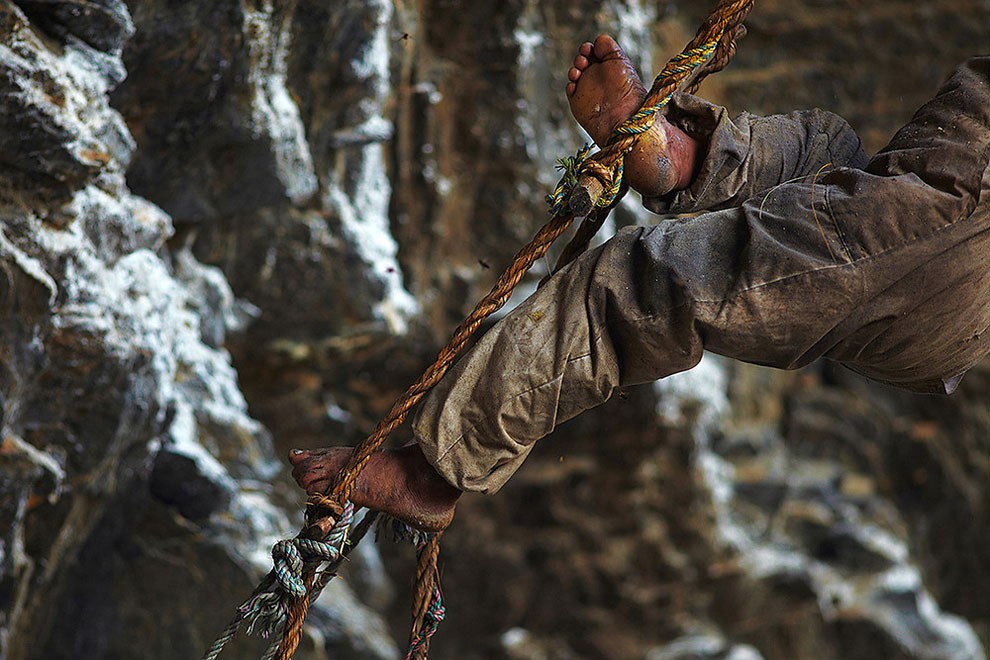 Honey hunting is among the oldest known human activities. There is an 8,000-year-old cave painting in Spain that portrays a man climbing vines to collect honey. One can imagine that these brave honey hunters’ occupation probably stretches back just as far, if not further. 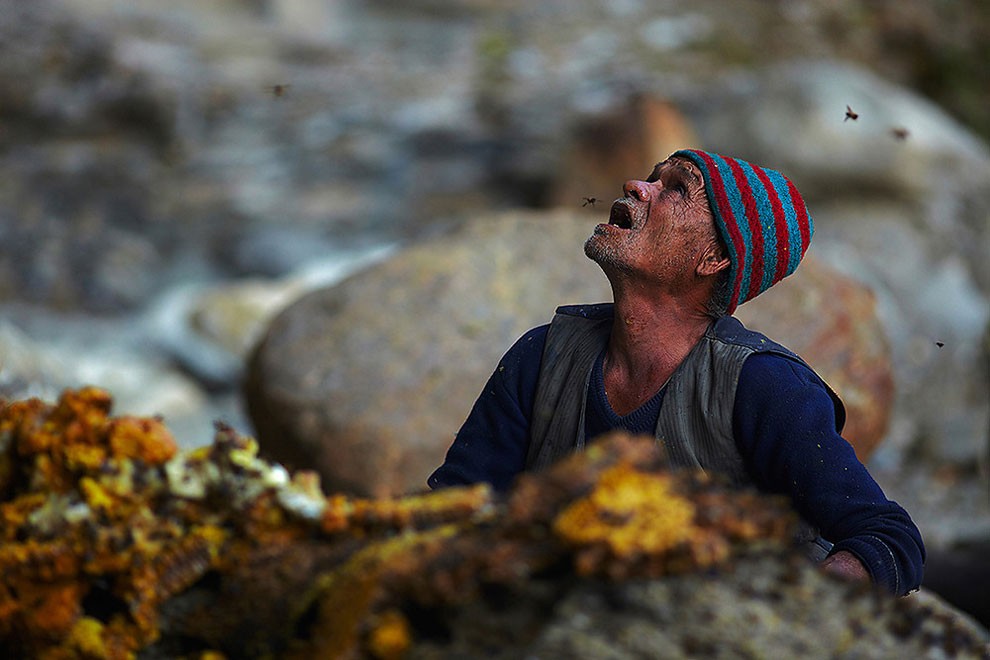 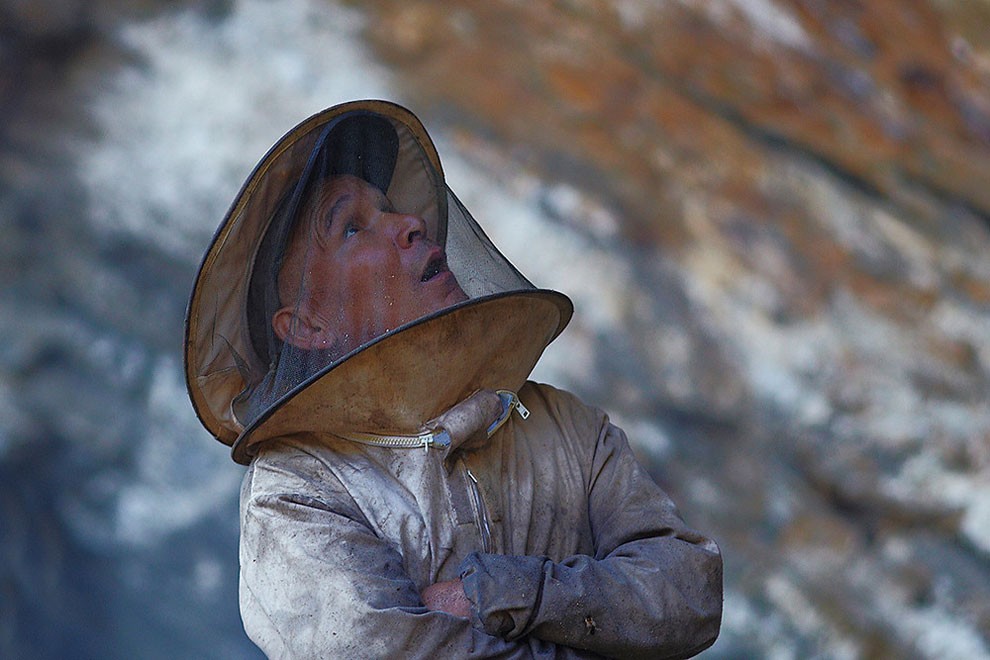 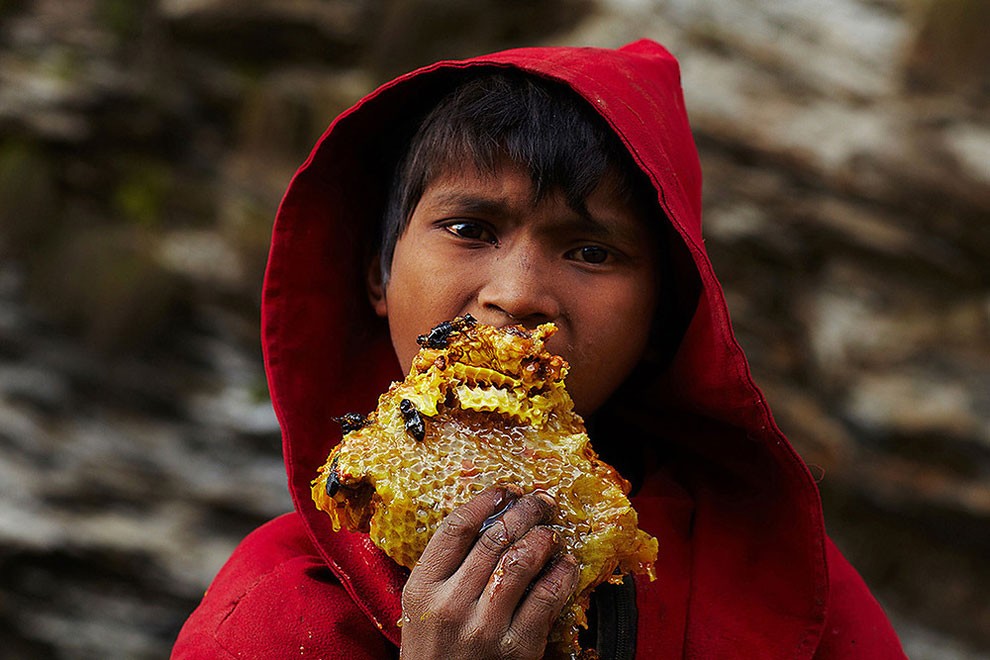 Pandemics Past, Green Futures Merge in Ceramic Gas Mask Pot from Franco-Japanese Project
The Lost Tribes Of Tierra Del Fuego: Rare And Haunting Photos Of Selk'nam People Posing With Their Traditional Body-Painting
Beautiful Colorized Photos Of Immigrants in Their Traditional Dresses At The Ellis Island Immigration Station In The Early 20th Century
When Airplane Food Was First Class – A Mouthwatering Look At What In-Flight Meals Used To Be Like In The Golden Age Of Flying
A Giant Ancient Egyptian Statues Unearthed
Photo of the Day: Wooded Walk in Nepal
People Of The World: Māori In Stunning Photographs By Jimmy Nelson
The Battle For The Largest Bonfire In The Netherlands
Is This The Ultimate And Most Dangerous Infinity Pool In The World?
Agoraphobic Artist Travels The World Without Leaving Her House
US Salt Flats Speed Week
Amazing Images Reveal How the Exclusion Zone Around Fukushima Has Been Abandoned to Become an Overgrown Wilderness
The White Frontier: Female Photographer Captures Beautiful Images Of Canada's Most Remote Regions In The 1900s
Walking On Frozen Baikal, The Deepest And Oldest Lake On Earth To Capture Its Otherworldly Beauty
After Going Through A Rough Year With Cancer, This Woman Takes Back Her Life By Doing This
Fiji's Awesome Floating Bar And Pizzeria
"The Last Days Of Martinique": Rare Portraits Of Martinique Residents Before The Deadly Volcano Eruption In 1902
Costumed Characters Converge On Spanish Town
This Small Village In Indonesia Is Literally Made Out Of Rainbows
This Amazing Village in India Plants 111 Trees Every Time a Little Girl is Born
"One Photo, Four Seasons": This Is How 8 Different Locations Around The World Look Across The Four Seasons
Frozen Caveman Sculpture Compared To Monolith Appears In Minneapolis
Wonderful Photos of Fujian Tulou, the Unique China’s Hakka Earthen Buildings
Shark Island in Central Indonesia
ancient, honey, hunters, nepal, traditional