Have you ever felt frustrated that photography was invented too late to give you a glimpse of some of your favourite historical events?

Well, if you are a fan of Britain’s struggle for democracy and equality, a free exhibition in Bradford is here to help.

Ways Of Looking, a city-wide photography festival features some of Red Saunders’ finest works.The artist specialises in huge ‘tableaux vivants’ (living pictures) where he gets dozens of actors to recreate moments from British history including the English Civil War, the Chartist movement and the Peasants’ Revolt. 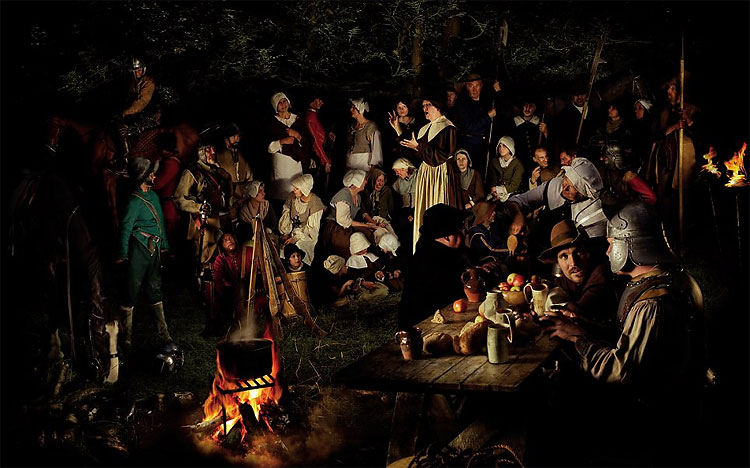 Historical ‘evidence’: Leveller Women in the English Revolution, 1647 is one of Red Saunders’ ‘tableaux vivants’ which recreates famous – and not so famous – scenes from the past.

Dark subjects: This picture is called Wat Tyler and the Peasant’s Revolt, 1381. The detail Saunders goes to – and the number of models he uses is inspiring. 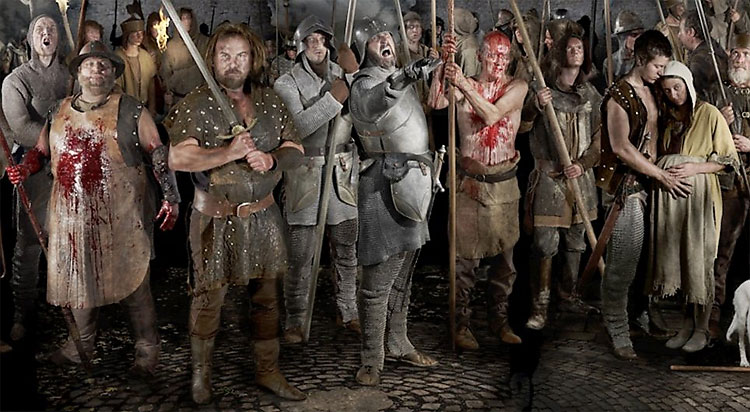 Close-up: You could spend hours infront of each photo, which are all displayed at Impressions Gallery in Bradford, admiring the different characters. New paintings: These pictures of Hilda of Whitby, a 7th century abbess and pioneer of women’s education (left) and the agricultural Swing Riots of 1830 are two of Red Saunders’ most recent photographs.

Behind the scenes: Red Saunders, left, at the Levellers photo shoot.

Attention to detail: Saunders needs all his subjects to hold the correct pose at the right time.

Realities Of The Twenties: Cool Snaps Show How Well They Dressed From The 1920s
These Winning Photos Of The 2018 Underwater Photographer Of The Year Contest Will Take Your Breath Away
Artist Christian Pierini Creates Fantastic and Detailed Portraits Using Instruments and Objects
Emotional Celebrity Portraits By Marc Hom
"Rebels Without A Pause" - Intimate Portraits Of Britain's Aging Rebels And Mavericks
Amazing Vintage Photographs of Harold Lloyd’s Magnificent (Year-Round!) Christmas Tree
Shocking Photographs Show Japanese Drinkers Using Pavements, Doorways And A Plant Pot As Impromptu Pillows After Succumbing To The Effects Of Alcohol
Photographer Amanda Jones Shows A Dog’s Love Is Timeless
Rare Pics Of The Infamous '50s London Girl Gang Are Unbelievably Cool
Homeless Couple Get A Makeover And A Surprise Charity Wedding After Being Together For 24 Years
"Moments Around the World": Amazing Cinematic Travel and Street Photography by Billy Dinh
Fascinating Photo Manipulations And Advertising Photography By Christophe Huet
Winners Of The Guardian Readers' Travel Photography Competition - January 2018
Striking Urban And Street Photography By Alfonso León
Jesus' face reveals itself in peeling paint and dirt outside Chinese takeaway
Spectacular Winners Of The Insight Astronomy Photographer Of The Year 2017
Behold The Spectacular Starlit Skies With Photographer Grey Chow
How Do Perceptions Of Beauty Vary Across The Globe?
14 Photographs Show How Creepy This Abandoned Mental Asylum In Italy Looks
Mask Project by Lala Roe
This Hipster Barbie Account Perfectly Mocks Every Annoying Person On Instagram
Blue Haze: Beautiful Desert Photographs By Mariyan Atanasov
Dreamlike Self-Portrait Photography By JeeYoung Lee
Symmetrical Parts Of Vienna And Budapest In Stunning Photographs By Zsolt Hlinka
amazingly, detailed, living, pictures, scenes, throughout