The winners of the 50th Wildlife Photographer of the Year Competition have been announced by London’s Natural History Museum. 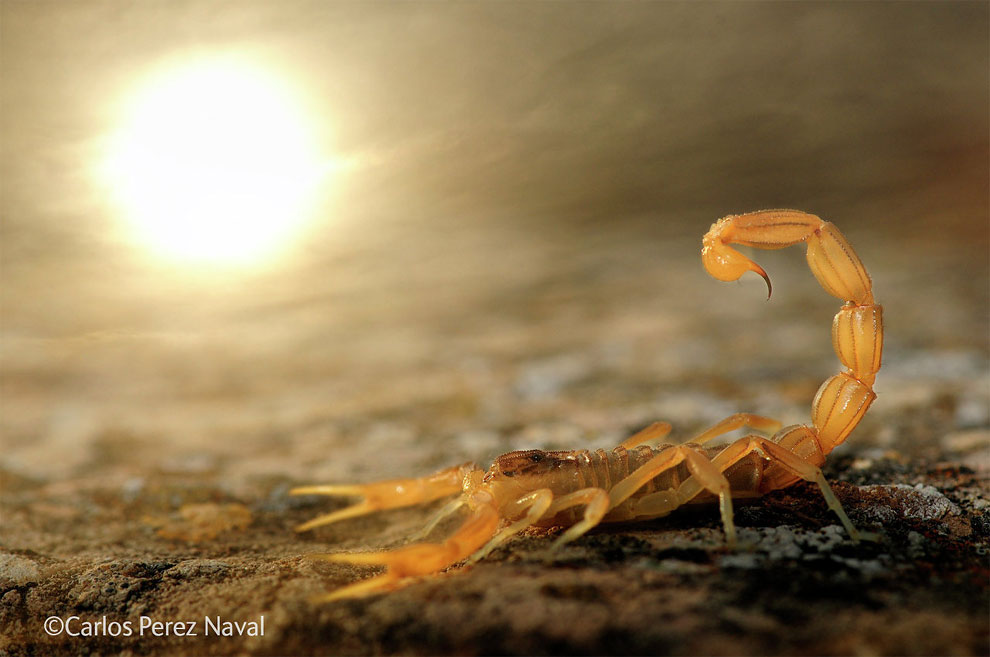 Stinger in the sun by Carlos Perez Naval (Spain)

Aware of Carlos’s presence, the common yellow scorpion is flourishing its sting as a warning. Carlos had found it basking on a flat stone in a rocky area near his home in Torralba de los Sisones, northeast Spain — also a place that he goes to look for reptiles. The late afternoon sun was casting such a lovely glow over the scene that Carlos decided to experiment with a double exposure (his first ever) so he could include the sun. He started with the background, using a fast speed so as not to overexpose the sun, and then shot the scorpion, using a low flash. But he had to change lenses (he used his zoom for the sun), which is when the scorpion noticed the movement and raised its tail. Carlos then had to wait for it to settle before taking his close-up, with the last rays of the sun lighting up its body. 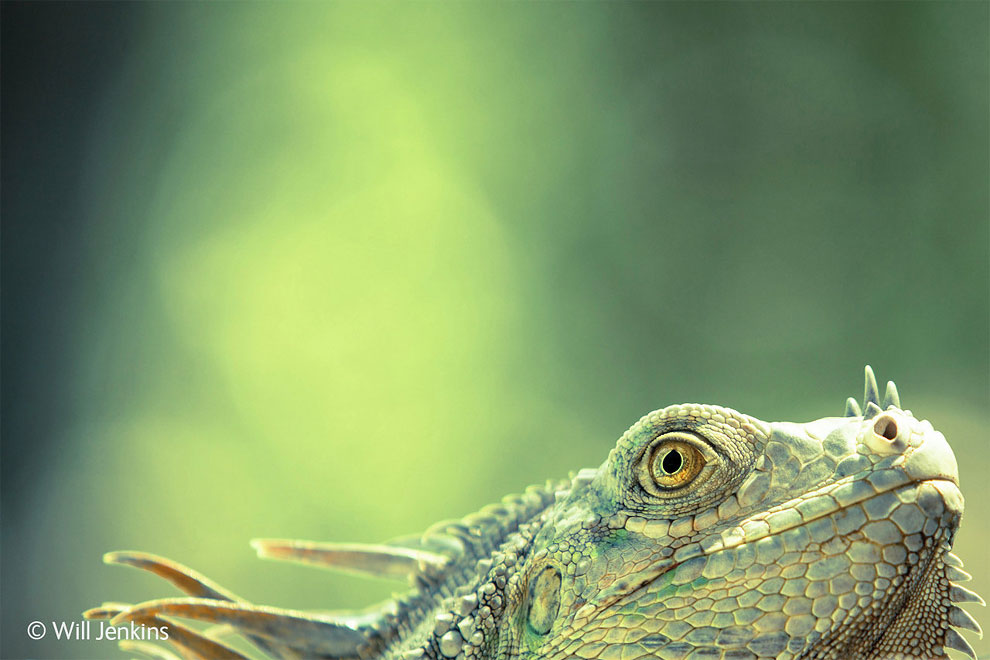 Relaxing by the hotel at the end of a Costa Rican family holiday, Will was planning on a day hanging out by the pool and surfing — that was until the green iguana jumped down from the hotel roof. Will grabbed his camera. “I love stories about dragons, and I wanted a big picture for my wall that would make me smile every day,” says Will. “I also wanted to impress my dad and brother with a shot of the biggest iguana I’d ever seen.” The metre-long (3-foot) lizard made its way to the top of a rock Will edged closer. “I tried to keep in the shadows, hiding behind one sunbed and then the next, so as not to scare it.” Selecting a wide aperture to make his subject stand out, Will carefully focused on its eye. “The iguana sunbathed for about 20 minutes before heading to the beach. It made me realize that you should always have your camera with you, just in case.” 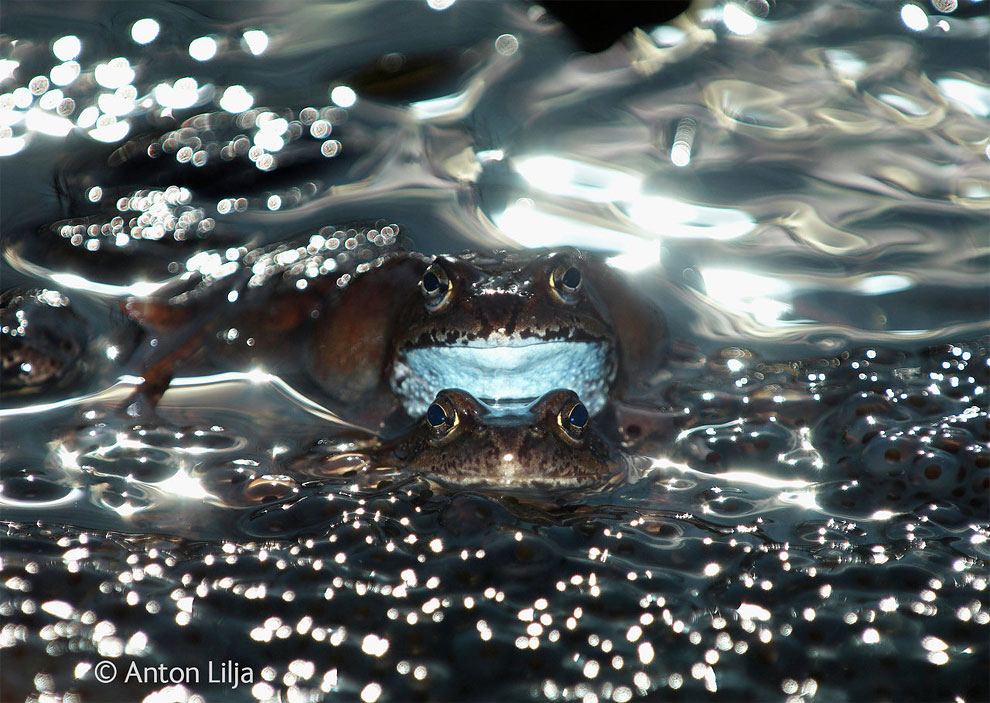 The moment her eggs make contact with water, the jelly around them will begin to swell. So a female frog needs to have a male nearby, ready to fertilize the eggs the instant they leave her body. And a male needs to hold on to her to make sure he’s the one doing the fertilizing. So he grasps her in a tight embrace, known as amplexus, often for days, until she has laid her eggs. Hearing that masses of common frogs were gathering in a flooded gravel pit near his home in Vasterbotten, Sweden, Anton set out to photograph the mating spectacle. Lying down on the bank at eye level with the water, he became fascinated by the light bouncing off the spawn and the water, which by now was vibrating with the activity of the frogs. Experimenting with his flash, he achieved the effect he wanted just as a pair of frogs in amplexus popped up right in front of the camera, the male revealing his throat to be flushed with blue. They stayed posed amid the glossy wobbliness, allowing Anton time to compose his shot. 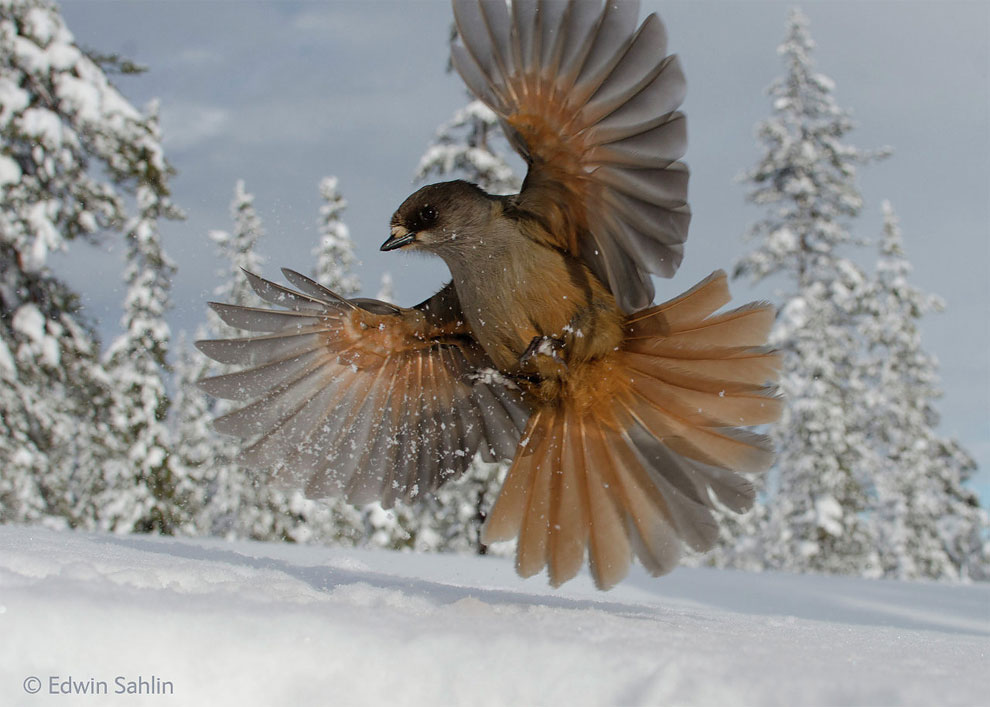 Cheese and sausage are what Siberian jays like — so Edwin discovered on a skiing holiday with his family in northern Sweden. Whenever they stopped for lunch, he would photograph the birds that gathered in hope of scraps. On this occasion, while his family ate their sandwiches, Edwin dug a pit in the snow deep enough to climb into. He scattered titbits of food around the edge and then waited. To his delight, the jays flew right over him, allowing him to photograph them from below and capture the full rusty colours of their undersides more clearly than he had dared hope. 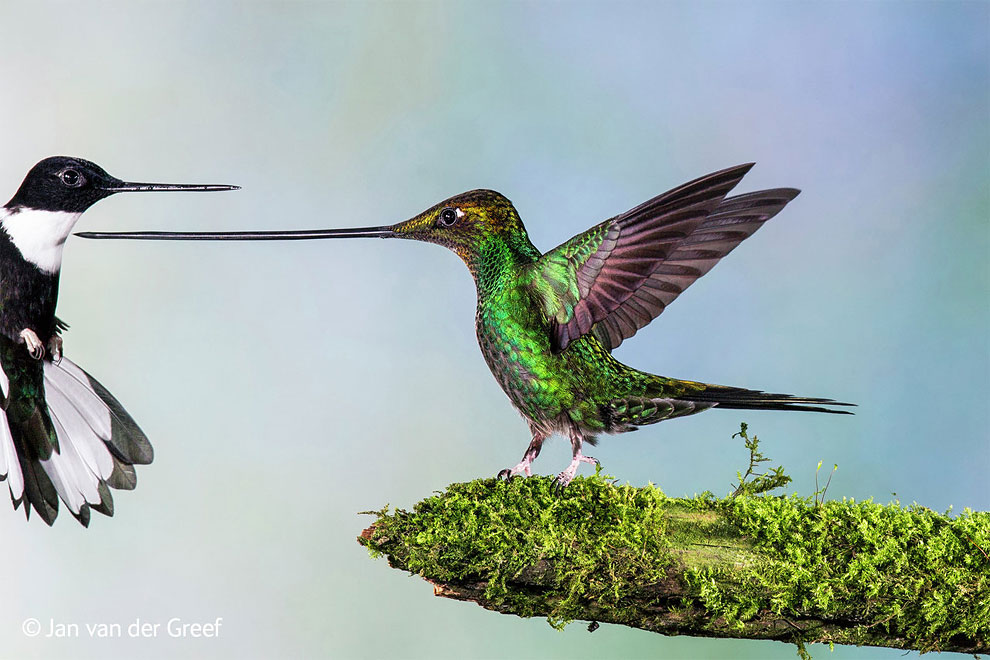 A focus of Jan’s trip to Ecuador was the astonishing sword-billed hummingbird — the only bird with a bill longer than its body (excluding its tail). Its 11-centimetre (4.3- inch) bill is designed to reach nectar at the base of equally long tube-shaped flowers, but Jan discovered that it can have another use. One particular bird had a regular circuit through the forest, mapped out by its favourite red angel trumpet flowers and bird-feeders near Jan’s lodge. To get to the bird-feeders, it had to cross the territory of a fiercely territorial collared inca. Rather than being scared off, once or twice a day “it used its bill to make a statement.” To capture one of these stand-offs, Jan set up multiple flashes to freeze the hummingbirds’ wing-beats — more than 60 a second — and finally captured the precise colourful moment. 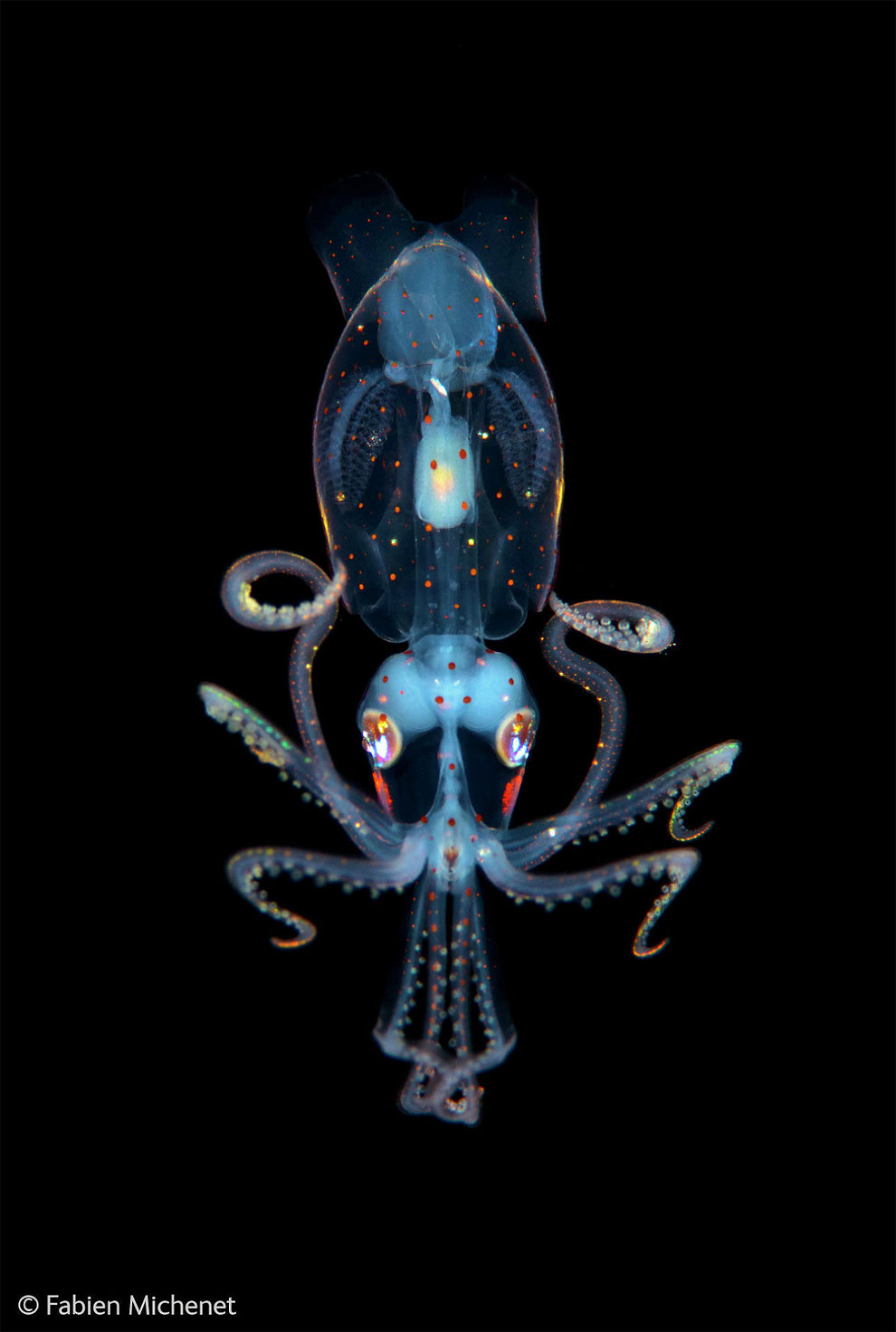 Planktonic animals are usually photographed under controlled situations, after they’ve been caught, but Fabien is fascinated by the beauty of their living forms and aims to photograph their natural behaviour in the wild. Night-diving in deep water off the coast of Tahiti, in complete silence apart from the occasional sound of dolphins, and surrounded by a mass of tiny planktonic animals, he became fascinated by this juvenile sharpear enope squid. Just 3 centimetres (an inch) long, it was floating motionless about 20 metres (66 feet) below the surface, probably hunting even smaller creatures that had migrated up to feed under cover of darkness. Its transparent body was covered with polka dots of pigment-filled cells, and below its eyes were bioluminescent organs. Knowing it would be sensitive to light and movement, Fabien gradually manoeuvred in front of it, trying to hang as motionless as his subject. Using as little light as possible to get the autofocus working, he finally triggered the strobes and took the squid’s portrait before it disappeared into the deep. 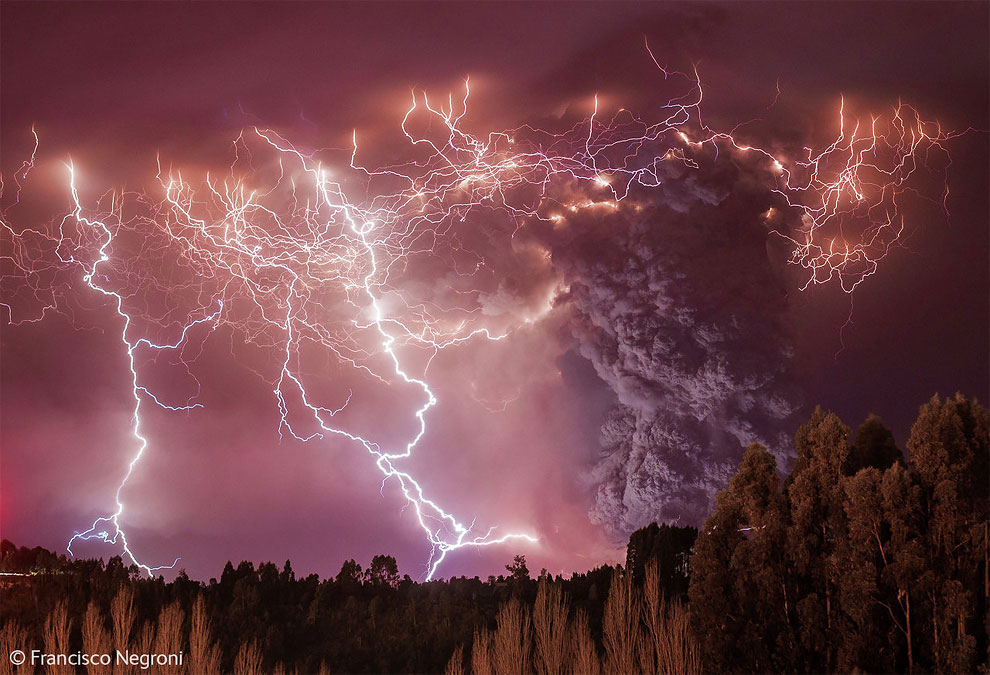 Straight after the Puyehue-Cordon Caulle volcanic complex began erupting, Francisco travelled to Puyehue National Park in southern Chile, anticipating a spectacular light show. But what he witnessed was more like an apocalypse. From his viewpoint — a hill quite a distance to the west of the volcano — he watched, awestruck, as flashes of lightning lacerated the sky and the glow from the molten lava lit up the smoke billowing upwards and illuminated the landscape. “It was the most incredible thing I have seen in my life.” Volcanic lightning (also known as a “dirty thunderstorm”) is a rare, short—lived phenomenon probably caused by the static electrical charges resulting from the crashing together of fragments of red—hot rock, ash and vapour high in the volcanic phime. The Corded Caulle eruption spewed 100 million tonnes of ash high into the atmosphere, causing widespread disruption to air travel in the southern hemisphere. Volcanic activity continued at a lesser level for a year, spreading a layer of ash over the region. 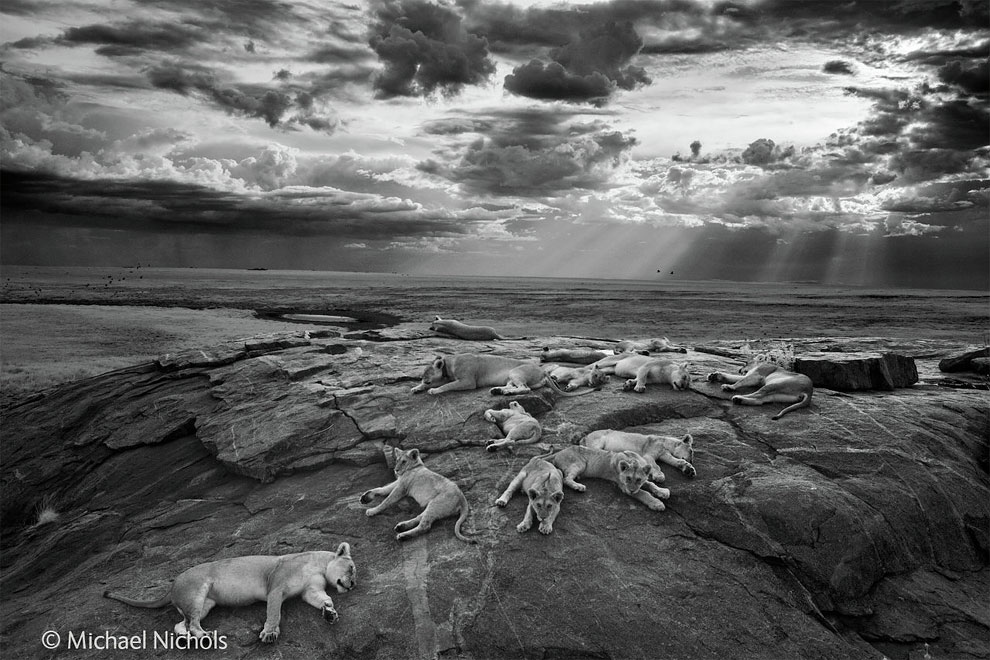 The last great picture by Michael ‘Nick’ Nichols (US)

Nick set out to create an archetypal image that would express both the essence of lions and how we visualize them — a picture of a time past, before lions were under such threat. Here, the five females of the Vumbi pride — a “formidable and spectacularly cooperative team” — lie at rest with their cubs on a kopje (a rocky outcrop), in Tanzania’s Serengeti National Park. Shortly before he took the shot, they had attacked and driven off one of the two pride males. Now they were lying close together, calmly sleeping. They were used to Nick’s presence— he’d been following them for nearly six months — which meant he could position his vehicle close to the kopje. Making use of a specially made hole in the roof, he slowly stood up to frame the vista, with the Serengeti plains beyond and the dramatic late-afternoon sky above. He photographed them in infrared, which he says: “cuts through the dust and haze, transforms the light and tams the moment into something primal, biblical almost.” The chosen picture — and Nick believes that the creation of a picture is as much in the choice as the taking — speaks about lions in Africa, part flashback, part fantasy. Nick got to know and love the Vumbi pride. A few months later, he heard that it had ventured into land beyond the park and that three females had been killed. 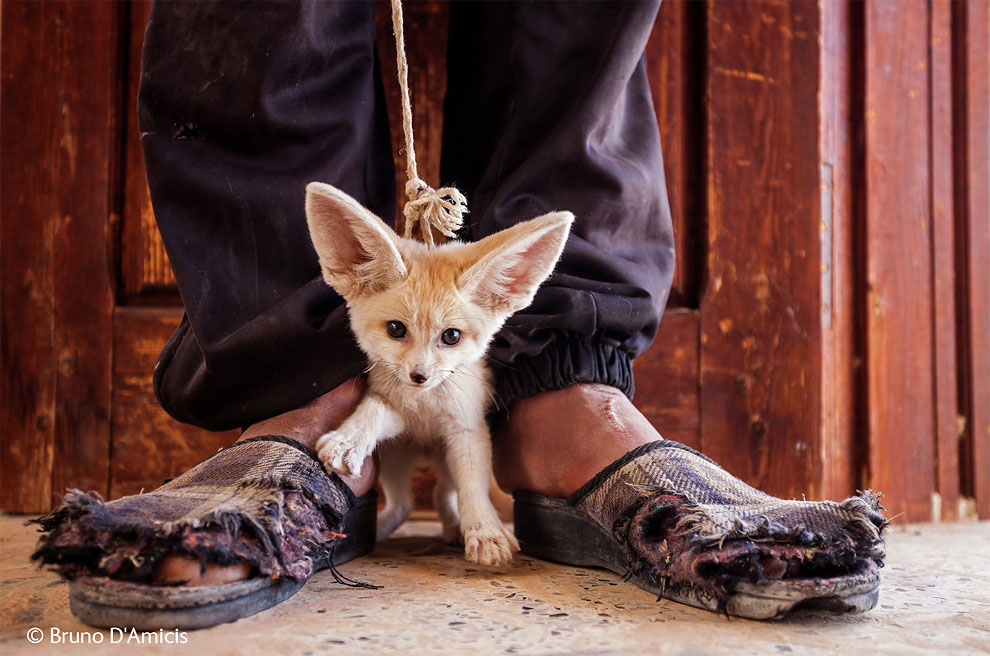 The price they pay by Bruno D’Amicis (Italy)

A teenager from a village in southern Tunisia offers to sell a three-month-old fennec fox, one of a litter of pups he dug out of their den in the Sahara Desert. Catching or killing wild feline c foxes is illegal in Tunisia but widespread, which Bruno discovered as part of a long-term project to investigate the issues facing endangered species in the Sahara. He gained the confidence of villagers in Tunisia, Algeria and Morocco and discovered widespread wildlife exploitation, including hunting and capture for commercial trade and traditional medicine. He also discovered that the causes and therefore the solutions are complex and include high unemployment, poor education, lack of enforcement of conservation laws, ignorant tourists and tour companies, habitat destruction and the socio-political legacy of the “Arab Spring” revolts. But Bruno is convinced that change is possible — that tourism has a part to play and that thought— provoking images can help raise awareness among tourists as well as highlight what’s happening to the fragile Sahara Desert environment. 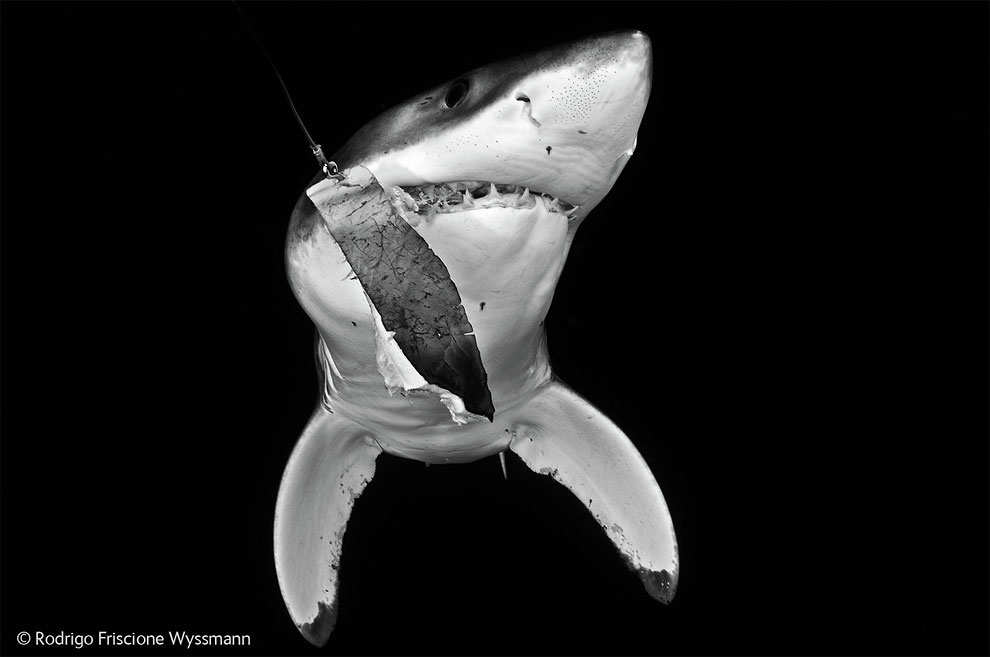 It had clearly been a monumental struggle: the young great white shark’s jaw jutted out at an ugly angle, evidence of how it had fought to escape from the hook before finally suffocating. Rodrigo came upon the grim sight off Magdalena Bay on the Pacific coast of Baja California, Mexico, after noticing that a fisherman’s buoy had been dragged below the surface by a considerable weight. The hook was on a long line of hooks, set to catch blue and mako sharks. “I was deeply shocked. Great whites are amazing, graceful and highly intelligent creatures. It was such a sad scene that I changed the image to black and white, which felt more dignified.” Such surface—baited longlines may stretch for miles and are responsible for the deaths of tens of thousands of animals every year, many of them endangered.

You Have To See These Astonishing Photos Taken By A 14-Year-Old Boy
Best Of Flickr 2017 – The 25 Most Beautiful Photos From Flickr In 2017
This Dog Can Keep Anything On His Head Without Falling
Swimming with Alligators
Bioluminescent Sea Fireflies Glittering Like Diamonds On The Rocks And Sand
"Light": Beautiful Winning Images Of WildArt Photographer of the Year 2021
10 Finalists Of The World Wildlife Day Photography Competition
Diving Jaguar Attacks Crocodile
World's First "Kitten Bar" Opens in Japan
"The Dogs Show": Photographers Explore The Amazing World Of Dog Breeds
Photographer Tossed Powder On Some Dogs, And The Result Turned Out Amazing
Miniature Donkeys Are The Best Friend Anyone Ever Had
Woman Put A Water Fountain With A Camera In Her Yard, Here Are Stunning Photos Of Regular Visitors
People Are Knitting Giant Sweaters For Rescued Elephants To Protect Them From Cold
Stunning Photos Of Cappadocia, Turkey That Will Take Your Breath Away
Gorgeous Photos Of '60s Classic Beauties Taken By Jerry Schatzberg
Marathon Runner Adopts Stray Dog Who Set Pace For Him In The Gobi Desert
These Sad Dogs Outside Shops Will Make You Cry
No One Will Know This Is a Space-Age Napping Pod For Your Cat
No Necks! There’s an Instagram Account That Posts Animals Without Necks.
Finnish Photographer Shoots Real Life Angry Birds, And We Can’t Finish Looking At Them
Oakland Zoo Lights Up its ZooLights
15 Rare Photos Taken With The First Ever Kodak Photo Camera
Vancouver Cops, Four-Legged Pals Pose For 2019 Police Dog Charity Calendar
photos, wildlife