Wildlife Photographer Of The Year 2015: First Glimpse Of Finalists’ Images

Wrestling Komodo dragons, a shark-repellent surfboard and a concerned gorilla are among the images captured on camera by finalists in the Wildlife Photographer of the Year 2015 competition. The competition attracted over 42,000 entries from both professionals and amateurs from 96 countries.

The winning images will be announced on 13 October, and an exhibition of the 100 shortlisted and winning images opens on 16 October at the Natural History Museum in London. These 100 images will also be part of an international tour spanning six continents, allowing millions of people to marvel at the beauty and variety of the natural world.

IBTimesUK presents a first look at ten of the finalists. A full gallery of winners will be published as soon as they are announced. 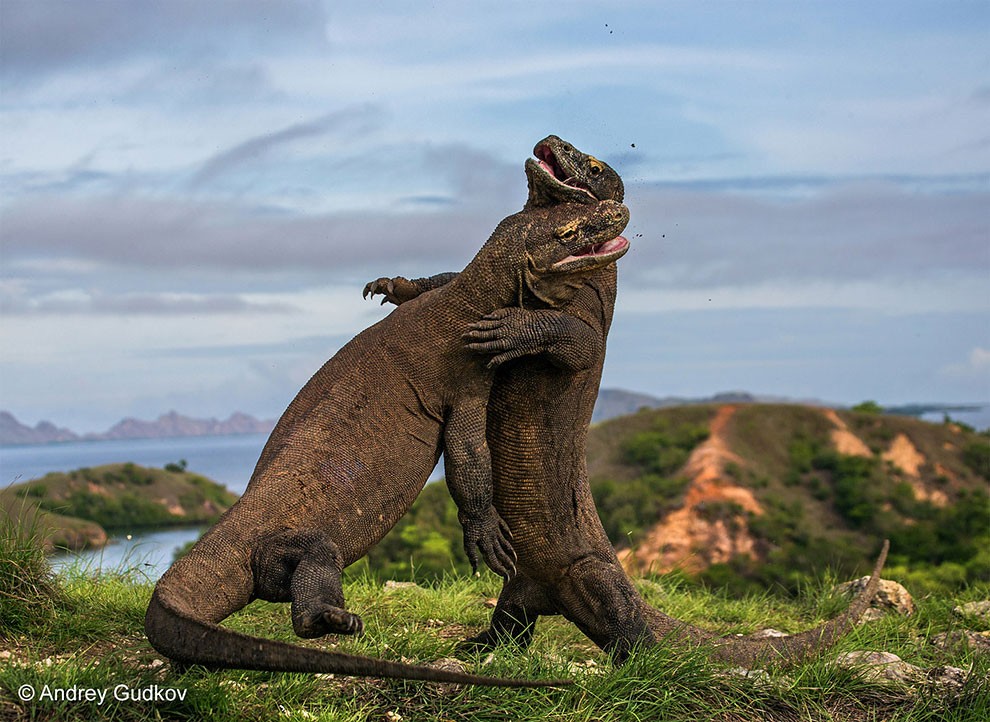 Finalist, Amphibians & Reptiles: Komodo Judo by Andrey Gudkov, Russia. The fight was fast and unexpected. Andrey had been to Indonesia’s Komodo National Park many times before, hoping to witness a battle between male Komodo dragons – the largest lizards in the world, measuring up to 2.5 metres (8 feet) long.

And though he had visited in August, when males are most likely to battle over females, he had never been lucky. But on this December morning, on Rinca Island, he had found two large males hissing angrily at each other. To his surprise, the confrontation escalated. The lizards reared up on their hind legs, supported by their long, muscular tails, and suddenly everything came together: two formidable dragons ‘dancing the tango’ at the crest of a hill against a beautiful backdrop, without the usual tall grass obscuring the action. Andrey seized his chance, knowing that Komodo dragons can move fast and that their bites are venomous, secreting a mix of toxic substances from glands in their jaws into the wounds made by their teeth. The dragons fought two consecutive bouts of a few seconds each until one overpowered the other, knocking him over backwards, and the pair walked off in different directions. With quick reactions and a fast shutter speed, Andrey had nailed the shot he had dreamt of.(Andrey Gudkov/Wildlife Photographer of the Year 2015) 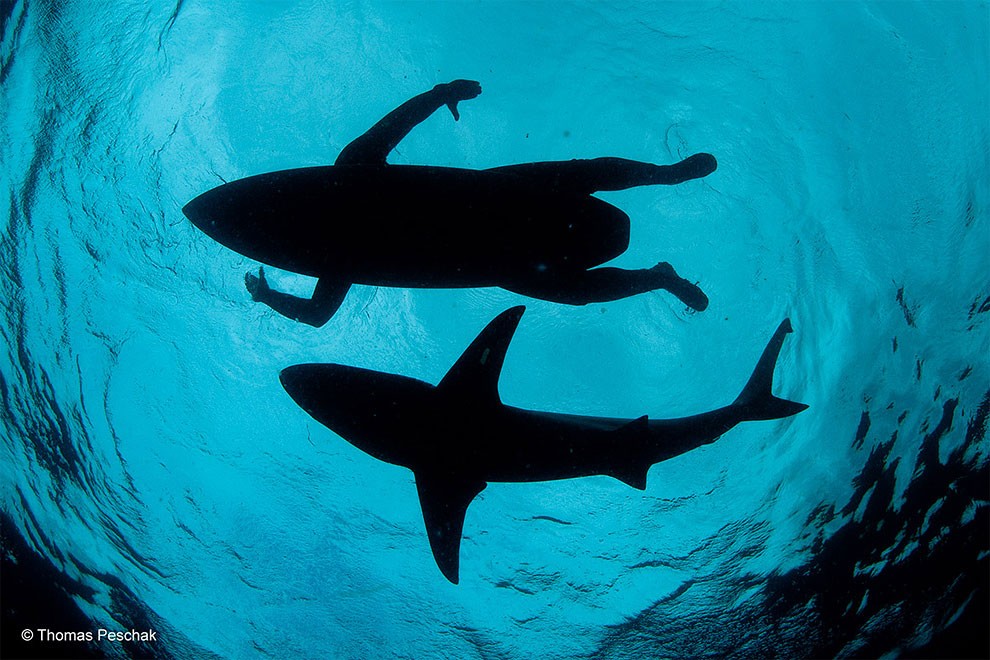 Finalist, Photojournalism Award: Single Image: The shark surfer by Thomas P Peschak, Germany/South Africa. The many sharks to be found at Aliwal Shoal near Durban, South Africa, make it a popular dive site – the perfect place to test a prototype surfboard with an electromagnetic shark deterrent. Surfers are occasionally targeted by sharks, but the risk of attack is very low. In 2014, there were 72 unprovoked shark attacks on swimmers worldwide, only 3 fatal. But fear of sharks prevails, and gill nets are still used to kill them in the hope of reducing attacks. ‘I wanted to illustrate a non-lethal approach to mitigating the shark-surfer conflict,’ explains Tom. When the new board was switched off, the curious blacktip sharks swam close, but when it was activated – stimulating their sensory organs – they stayed at a distance. To avoid bubbles in the picture, Tom free-dived, framing the complementary forms to suggest peaceful coexistence rather than conflict.Wildlife Photographer of the Year 2015) 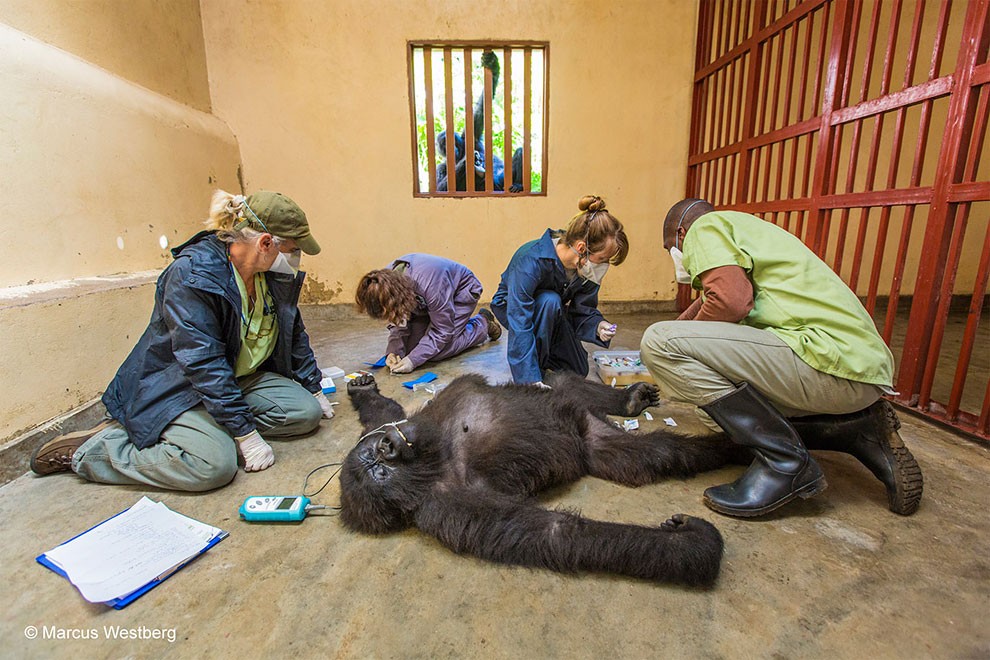 Finalist, Photojournalism Award: Single Image: Gorilla care by Marcus Westberg, Sweden. Ndeze, a nine-year-old orphan mountain gorilla, watches with concern as veterinarians check the health of her female companion, twelve-year-old Maisha, in the Senkwekwe Centre at the headquarters of the Virunga National Park, in the Democratic Republic of the Congo. The resident ‘gorilla doctor’ Eddy Kambale (here with the former regional director Jan Ramer, left, assisted by two visiting vets) runs thorough health checks every year on the four orphan mountain gorillas, all of whom have been rescued from poachers and traffickers and have suffered traumatic experiences. The centre – named after Ndeze’s father, who was murdered along with Ndeze’s mother and several other members of her family in 2007 – is just part of the park’s efforts to protect the surviving mountain gorillas. ‘The deep bonds that exist between these orphans, their carers and Eddy is one of the most touching things I have ever had the privilege of witnessing,’ says Marcus.(Wildlife Photographer of the Year 2015) 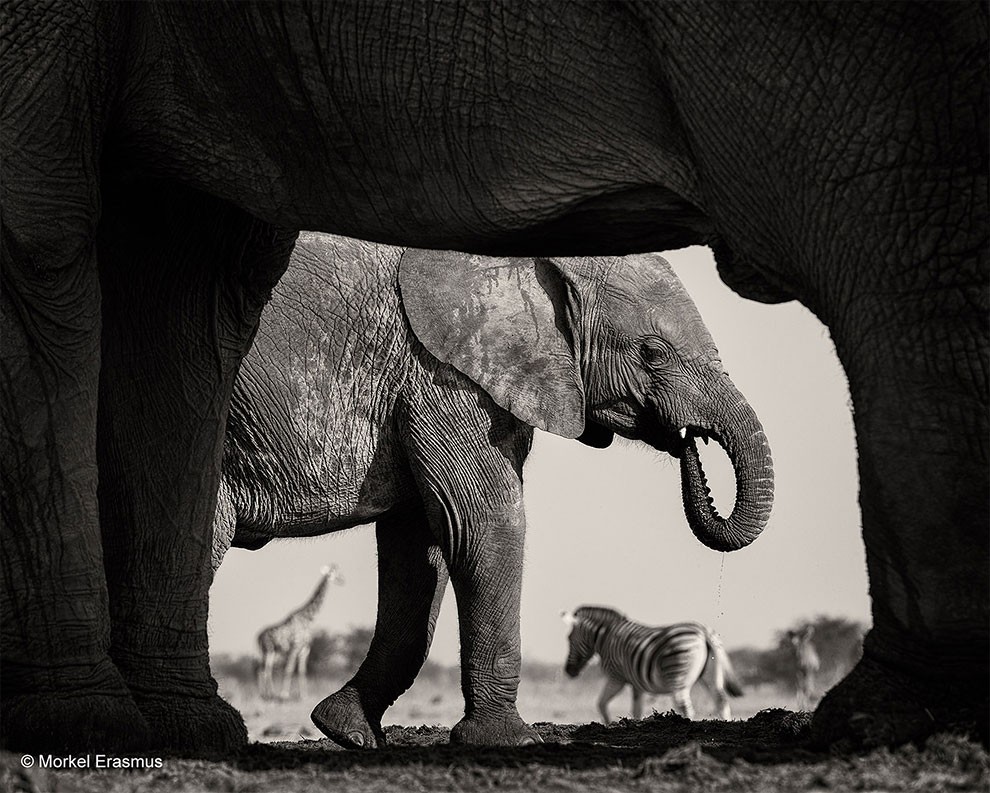 Finalist, Black & White: Natural frame by Morkel Erasmus, South Africa. Morkel could hear every rumble. He could even smell the elephants. But his view was limited to the viewing slit of a cramped bunker sunk into the ground beside a remote waterhole in Namibia’s Etosha National Park. Giraffes, zebras and kudu wandered in and out of view, but the elephants were right in front, sometimes so close that his view was blocked. Morkel used black and white to place the emphasis on the composition. His moment came when a mother framed his shot with her legs just as her calf walked into view framing a giraffe. Having caught his ‘dream moment’, Morkel put down his camera and just sat and enjoyed the ‘bliss’ of watching wild animals taking their turn to drink from this life-giving waterhole.(Morkel Erasmus/Wildlife Photographer of the Year 2015) 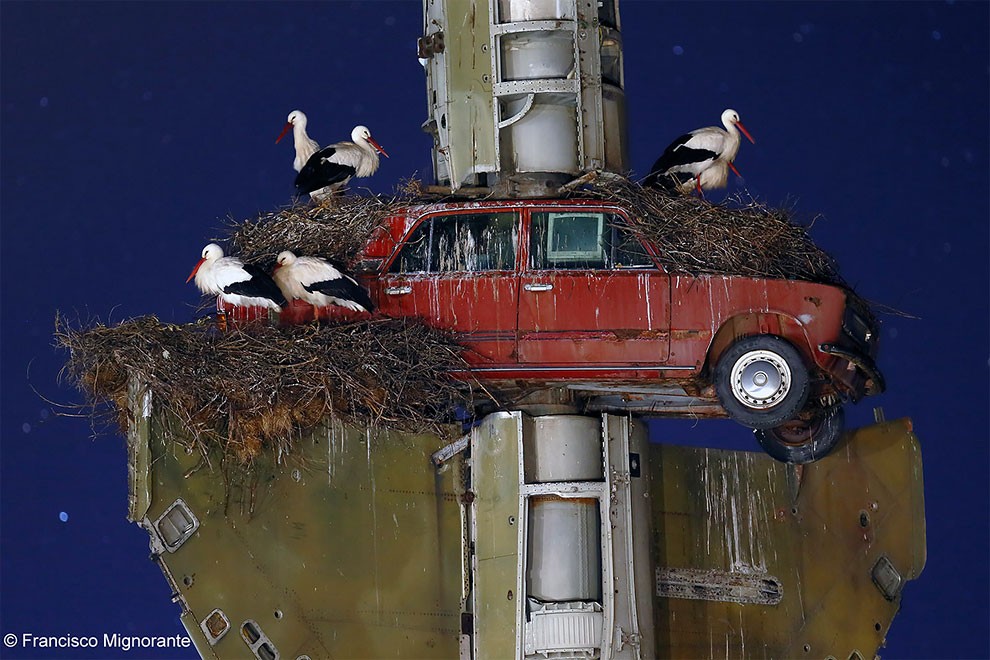 Finalist, Urban Wildlife: Stork art by Francisco Mingorance, Spain. White storks seem equally at home on artificial structures as they are in trees, often nesting on rooftops and telegraph poles. Francisco discovered three pairs high on this sculpture outside the Vostell-Malpartida Museum near Cáceres in Spain. The installation, by German artist Wolf Vostell, incorporates a Russian MiG-21 aircraft, two cars, pianos, computer monitors – and now, three huge nests, which the storks use each year, migrating from their overwintering grounds in southern Africa. Francisco wanted a picture of the storks sleeping under a starry sky, but there was too much light. ‘I got special permission for most lights to be shut down,’ he says, ‘but then the storks kept moving about and flying off.’ Using a long exposure, he got just one shot he liked, with the storks quietly asserting their place in the modern world that Vostell depicted.(Francisco Mingorance/Wildlife Photographer of the Year 2015) 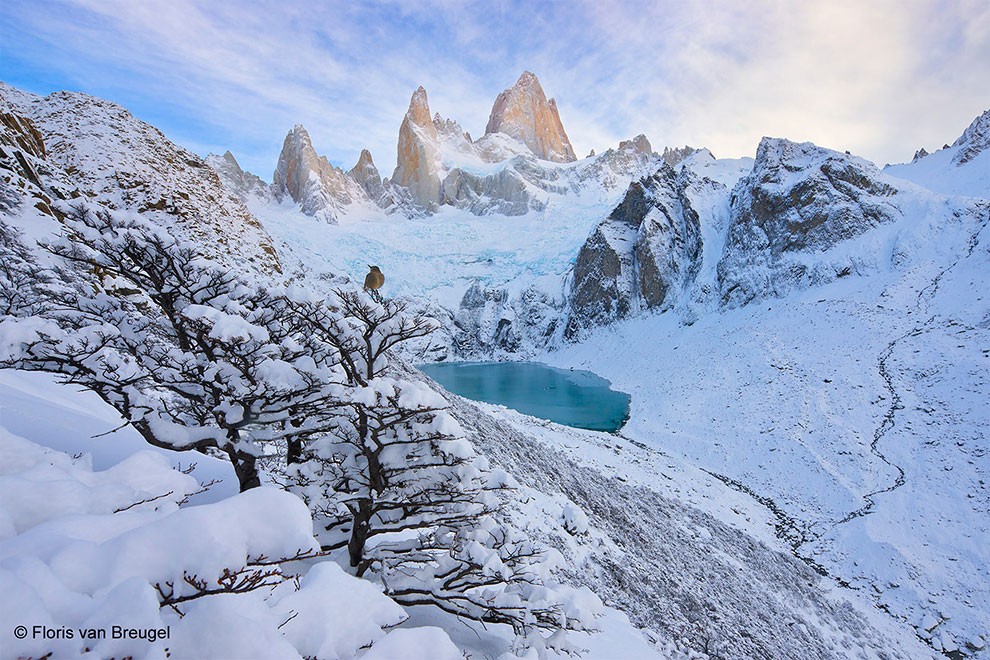 Finalist, Land : Jagged peace by Floris van Breugel, USA. ‘It was a rare opportunity,’ says Floris, grateful to his companion, who was skilled at predicting weather patterns in this part of Patagonia. ‘There was enough snow to stick to the trees but not so much as to make travel dangerous, no wind, an unfrozen lake and a clear view of Fitz Roy.’ They had weathered a snowstorm before donning snowshoes and heading into the backcountry of Argentina’s Los Glaciares National Park. A designated World Heritage site, the park boasts the largest ice mantle outside Antarctica, with numerous glaciers, lakes and towering mountains. Mount Fitz Roy – also known as the ‘smoking mountain’, after the cloud that usually forms around its peak – is the highest, rising a jagged 3,375 metres (11,000 feet) above sea level. While Floris was scouting for compositions, a little bird showed up – a black-billed shrike-tyrant (named after the aggressive nature of some species in its tyrant flycatcher family). With fresh snow and muted light evoking the quiet wilderness, the bird completed the shot, adding a sense of scale and connection to the landscape.(Floris van Breugel/Wildlife Photographer of the Year 2015) 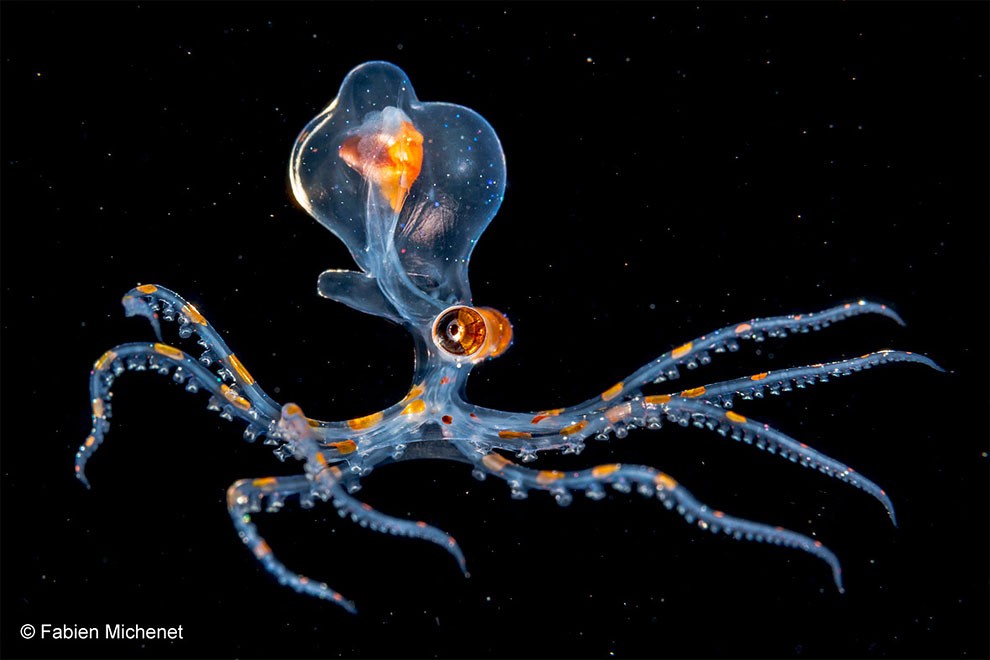 Finalist, Underwater: It came from the deep by Fabien Michenet, France. Fabien spends many hours diving at night in deep water off the coast of Tahiti, French Polynesia, where he lives. He is fascinated by the diversity of tiny creatures that migrate up from the depths under cover of darkness. These zooplankton feed on the phytoplankton found near the surface (which need sunlight to photosynthesise) and are themselves hunted by small predators that follow their ascent. One night, about 20 metres (66 feet) below the surface, in water 1,000 metres (3,300 feet) deep, some juvenile octopuses – just 2 centimetres (an inch) across, swam into view. ‘One of them stopped in front of me,’ says Fabien, ‘waving its tentacles gracefully, perhaps taking advantage of my lights to hunt the little crustaceans that were swimming around.’ Its body was transparent – camouflage for the open ocean – revealing its internal organs. Chromatophores (colour‑changing cells) were visible on its tentacles, possibly for use in the light, when a different kind of camouflage would be needed. By keeping as close as possible and drifting at exactly the same speed as the diminutive octopus, and taking care not to upset its natural behaviour with strong lighting, Fabien was able to capture his eye-to-eye portrait.(Fabien Michenet/Wildlife Photographer of the Year 2015) 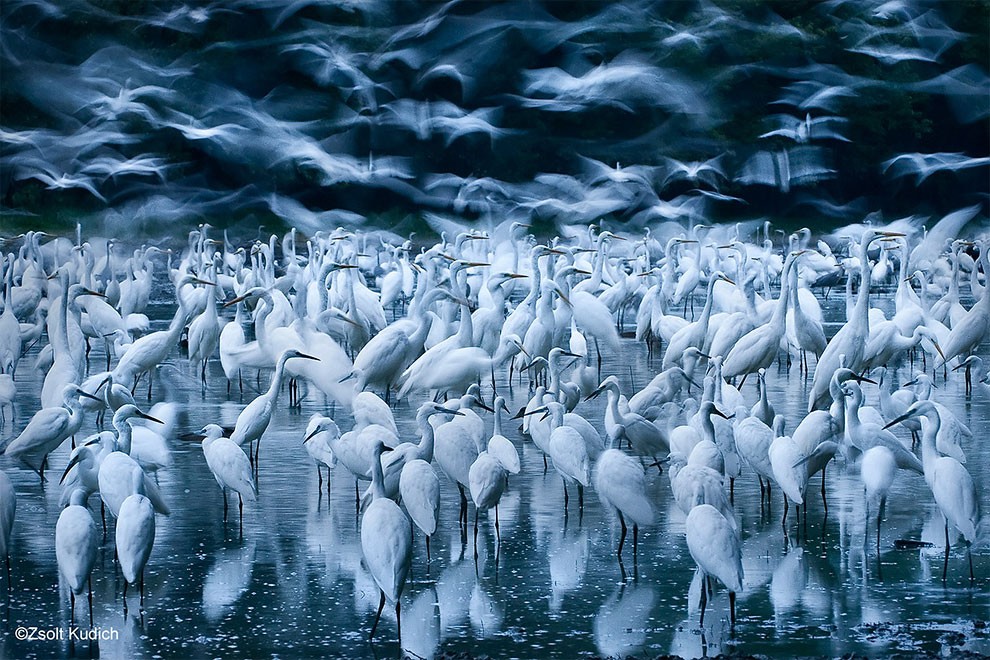 Finalist, Birds: Great egret awakening by Zsolt Kudich, Hungary. When the River Danube flooded into Hungary’s Gemenc Forest, more than a thousand great egrets flocked to the lake to feed on the stranded amphibians, fish and invertebrates. Working on a project to document the last untouched regions of the Danube, including the floodplains, Zsolt was delighted to find a sixth of Hungary’s great egret population in the one place. By 1921, hunting had reduced their number to just 31 pairs. Today, habitat loss is the big threat. Using the soft dawn light, Zsolt wanted to convey the impression of a multitude of birds. So he pitched his camouflaged tent nearby, sleeping just a few hours a night for five nights. His chance came when a fishing white-tailed eagle sent some of the egrets into the air. With a slow shutter speed to blur the wings and a large depth of field to keep in focus those standing, Zsolt got his memorable image.(Zsolt Kudich/Wildlife Photographer of the Year 2015) 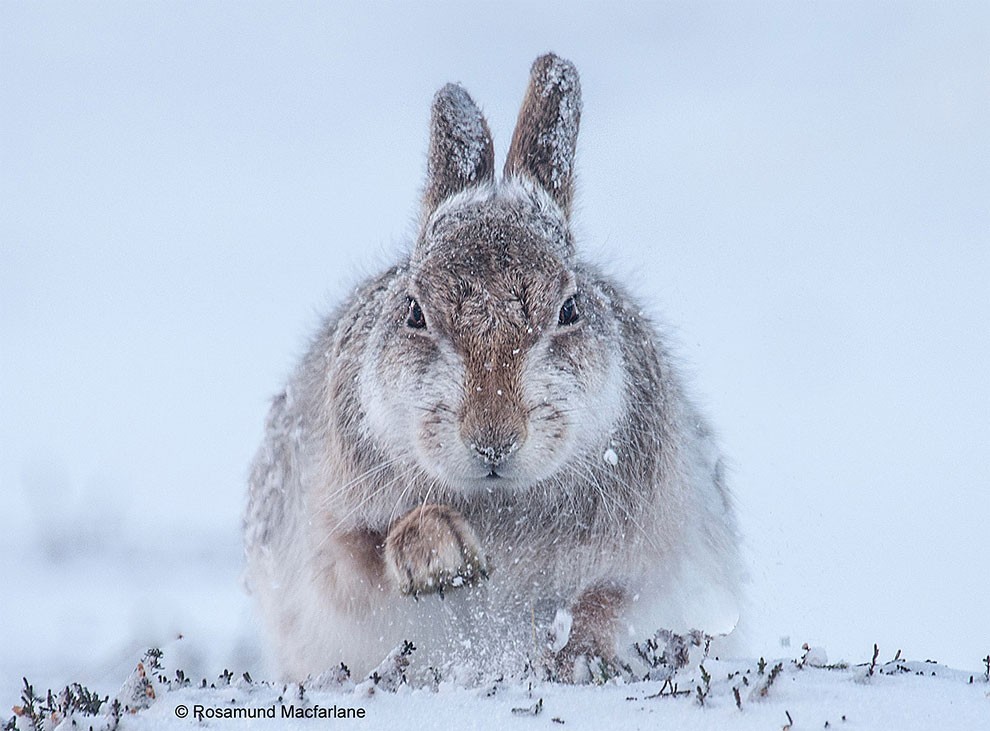 Finalist, Mammals: Snow hare, by Rosamund Macfarlane, UK. One of Rosamund’s photographic ambitions was to photograph Scottish mountain hares in the snow, camouflaged in their winter coats. Native to Britain, mountain hares moult from brown to white or partially white in winter, depending on temperature. With a local expert, Rosamund climbed a valley in the Scottish Cairngorms, ‘at times through knee-deep snow’, until they came across a couple of hares that allowed them to approach within photographic range. Their mottled, snow-dusted coats echoed the colours of the snow-covered hillside. For several hours, Rosamund lay on the ground in freezing temperatures, observing the hares snuggled into their forms (shallow depressions) as fine snow blew over them and rime coated their pelts. In the late afternoon, the hares finally became active and started to feed, scraping the snow from the heather and then nibbling the shoots. Positioning herself so that she was looking up a gentle incline directly at one hare, Rosamund captured its determined scrabbling in a head-on portrait.(Rosamund Macfarlane/Wildlife Photographer of the Year 2015) 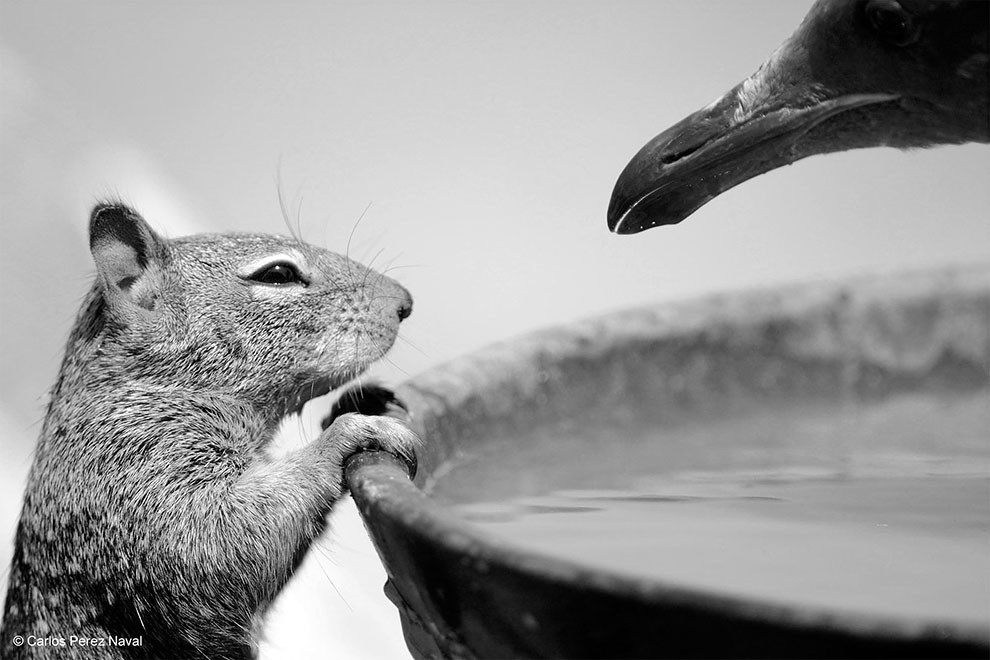 Finalist, 10 years and under: To drink or not by Carlos Perez Naval, Spain. Carlos was on the beach at Morro Bay in California, on holiday with his family, when he witnessed this interaction between two different species. A colony of California ground squirrels live among the rocks at one side of the bay, fed by locals, who also put out dishes of water for them. What Carlos noticed was that western gulls were monopolising the water. Whenever a ground squirrel dared to get too close, a gull would chase it away, aiming its powerful beak at the squirrel’s head. Carlos was fascinated by the way the ground squirrels would try to sneak in for a sip when the gulls weren’t looking. Here, the two competitors’ eyes lock over the coveted fresh water. Carlos took the shot just before the gull lunged forwards and the squirrel fled.(Carlos Perez Naval/Wildlife Photographer of the Year 2015)