2016 Wildlife Photographer Of The Year Winners 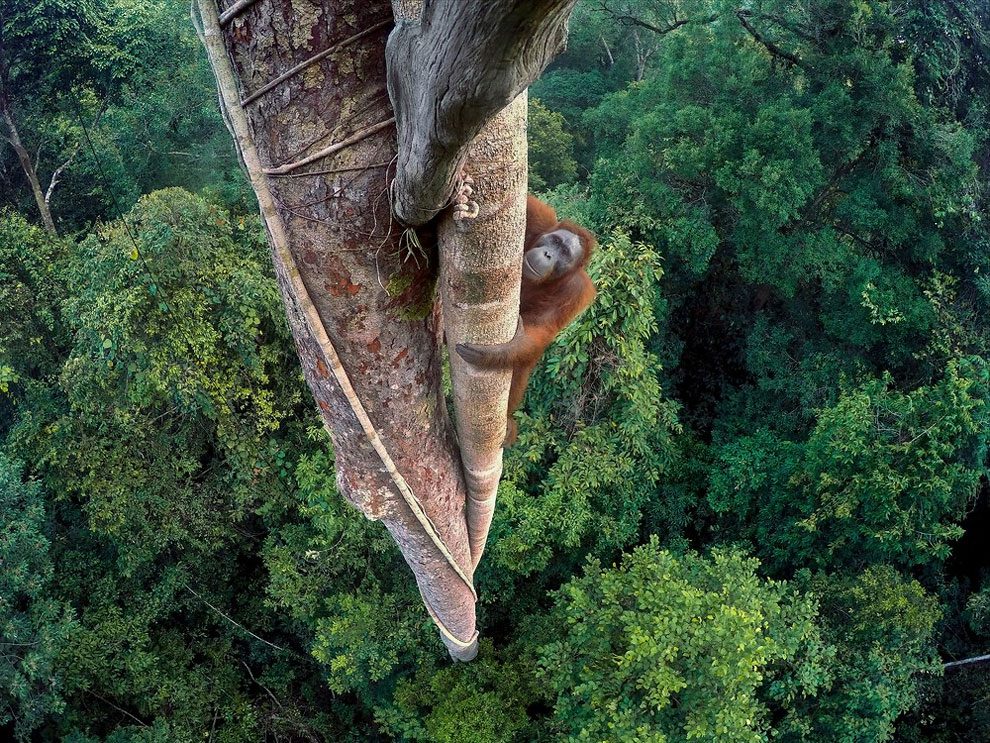 “Entwined Lives”. Tim Laman, US Winner, Wildlife photographer of the year. A young male orangutan makes the 30-metre climb up the thickest root of the strangler fig high above the canopy in Gunung Palung national park, one of the few protected orangutan strongholds in Indonesian Borneo. Laman had to do three days of climbing to position several GoPro cameras that he could trigger remotely. This shot was the one he had long visualised, looking down on the orangutan within its forest home. (Photo by Tim Laman/2016 Wildlife Photographer of the Year) 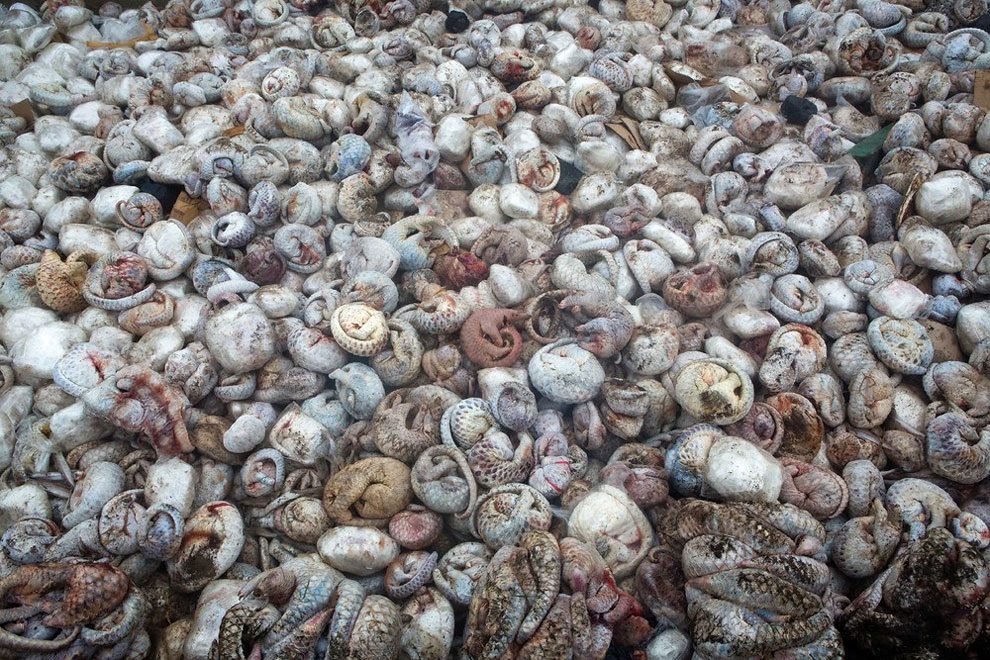 “The pangolin pit”. Paul Hilton, UK/Australia Winner, Wildlife photojournalist award: Single image category. Nothing prepared Hilton for the sight of 4,000 defrosting pangolins (five tonnes) from one of the largest seizures of the animals on record. They were destined for China and Vietnam for the exotic meat trade or for traditional medicine. Pangolins have become the world’s most trafficked animals, with all eight species targeted. (Photo by Paul Hilton/Greenpeace/2016 Wildlife Photographer of the Year) 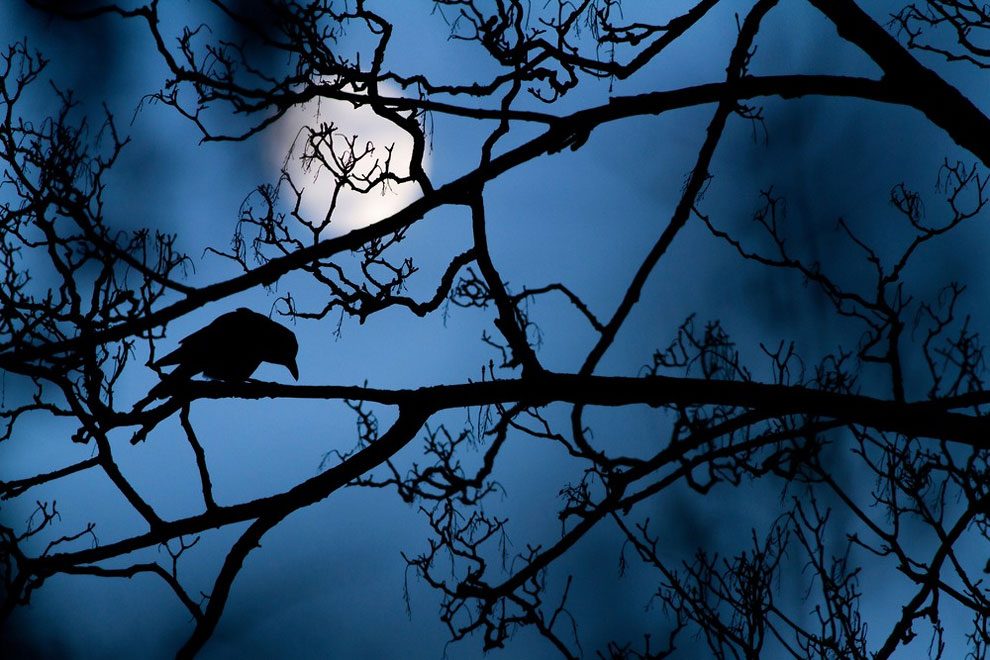 “The moon and the crow”. Gideon Knight, UK Winner, Young wildlife photographer of the year. A crow in a tree in a park: a common enough scene. It was one that Gideon had seen many times near his home in London’s Valentines Park. But as the blue light of dusk crept in and the full moon rose, the scene transformed. (Photo by Gideon Knight/2016 Wildlife Photographer of the Year) 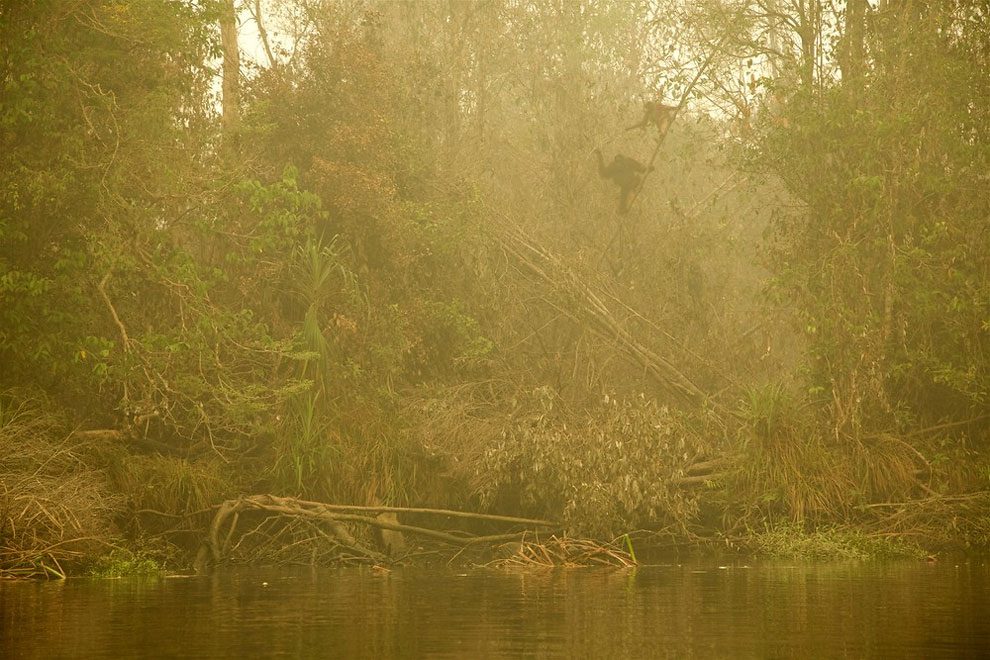 “Pursued by fire”. On the riverbank, an orangutan and her youngster seek refuge from the burning forest. Tim photographed them through thick smoke from a boat on the Mangkutup river in Central Kalimantan, Indonesian Borneo. The fires that affected much of Indonesia in 2015 damaged or destroyed vast tracts of habitat, putting the critically endangered Bornean orangutans and the even-rarer Sumatran orangutans (population 6,600) in an ever more precarious situation. (Photo by Tim Laman/2016 Wildlife Photographer of the Year) 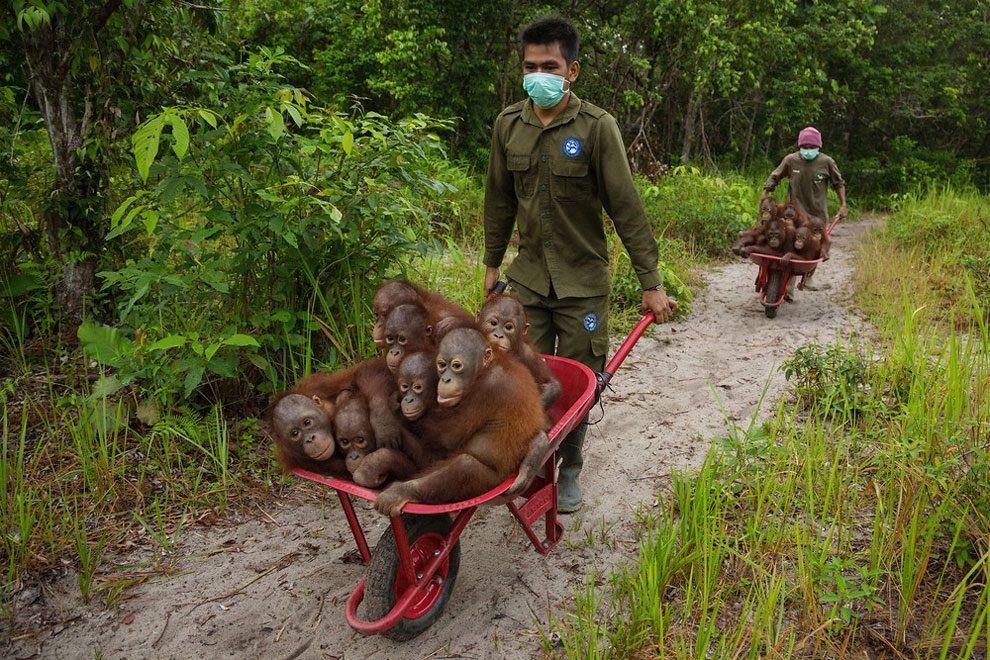 “End of the line?”. Rescue centres such as this one in Ketapang, West Kalimantan, reported a huge influx of orphan orangutans as a result of the fires in 2015. The caretakers do a magnificent job, here taking a barrow-full of one- and two-year-old Bornean orangutans to play in the forest, where they will learn some of the basic skills of survival. (Photo by Tim Laman/2016 Wildlife Photographer of the Year) 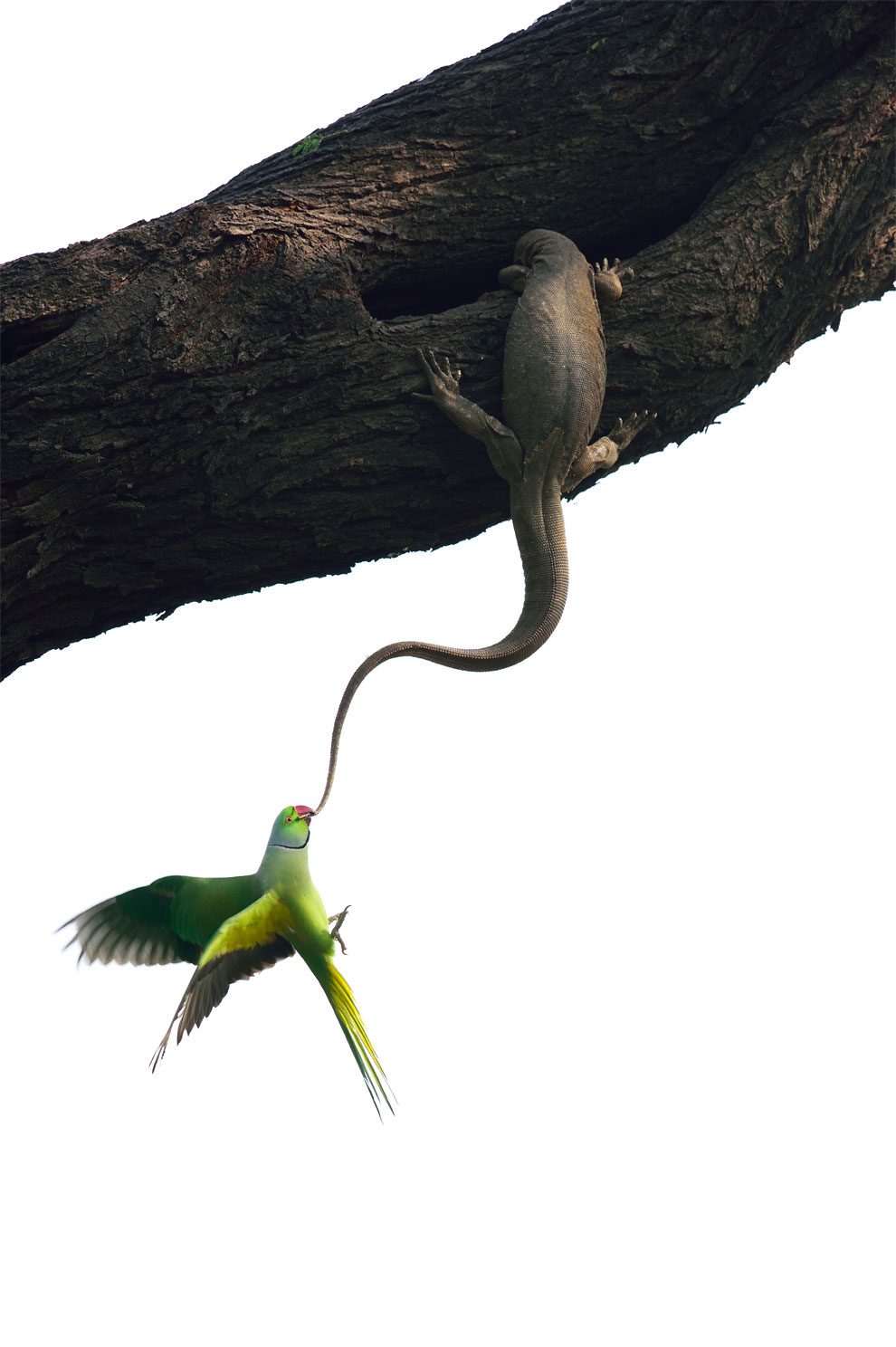 “Eviction attempt”. Ganesh H. Shankar, India Winner, Birds category. These Indian rose-ringed parakeets returned to their roosting and nesting hole high up in a tree in India’s Keoladeo national park, only to find that a Bengal monitor lizard had taken up residence. The birds immediately set about trying to evict the squatter. They bit the monitor lizard’s tail, hanging on for a couple of seconds at a time, until it retreated into the hole. They would then harass it when it tried to come out to bask. This went on for two days. (Photo by Ganesh H. Shankar/2016 Wildlife Photographer of the Year) 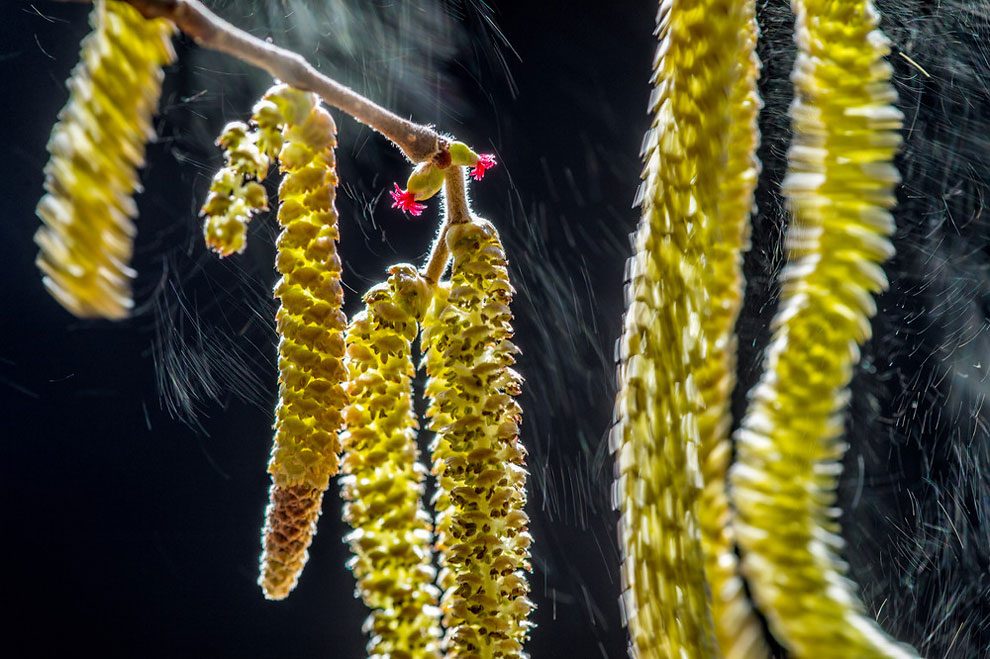 “Wind composition”. Valter Binotto, Italy Winner, Plants and fungi category. This hazel tree is near Binotto’s home in northern Italy, and to create the dark background, he positioned himself to backlight the flowers. Hazel has both male and female flowers. “The hardest part was capturing the female flowers motionless while the catkins were moving”, he explains. “I searched for flowers on a short branch that was more stable”. Using a long exposure to capture the pollen’s flight and a reflector to highlight the catkins, he took many pictures before the wind finally delivered the right composition. (Photo by Valter Binotto/2016 Wildlife Photographer of the Year) 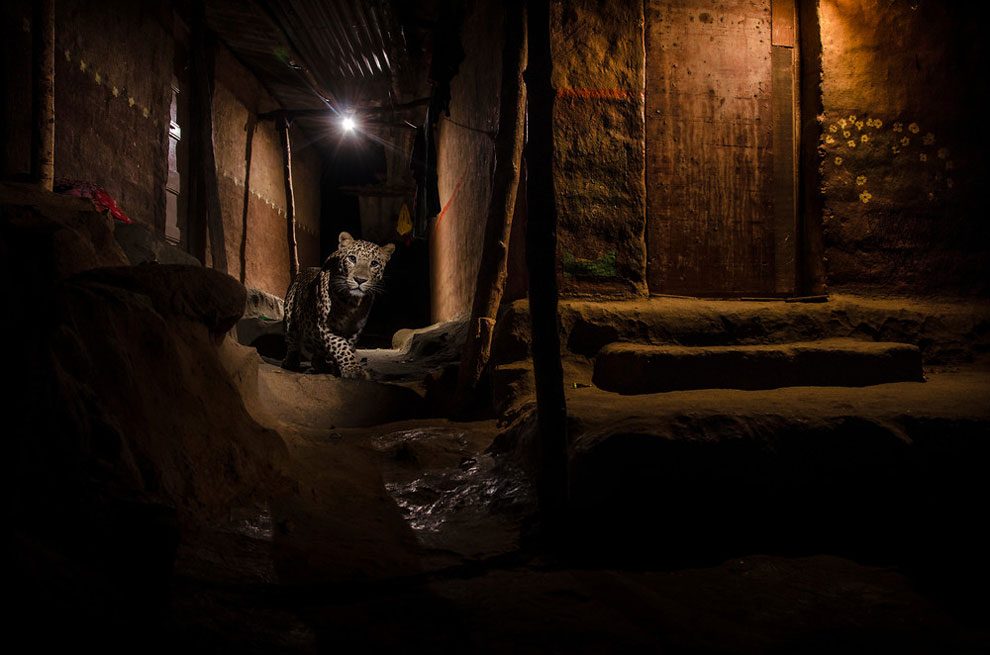 “The alley cat”. Nayan Khanolkar, India, Urban category winner. At night, in a suburb of Mumbai bordering Sanjay Gandhi national park, leopards slip through the maze of alleys, looking for food. Despite close encounters and occasional attacks, the cats are an accepted part of the Warli people’s lives and culture. Nayan was determined to use his pictures to show how things can be different with tolerance and planning. Positioning his flashes to mimic the alley’s lighting and his camera so that a passing cat would not dominate the frame, he finally – after four months – got the shot he wanted. (Photo by Nayan Khanolkar/2016 Wildlife Photographer of the Year) 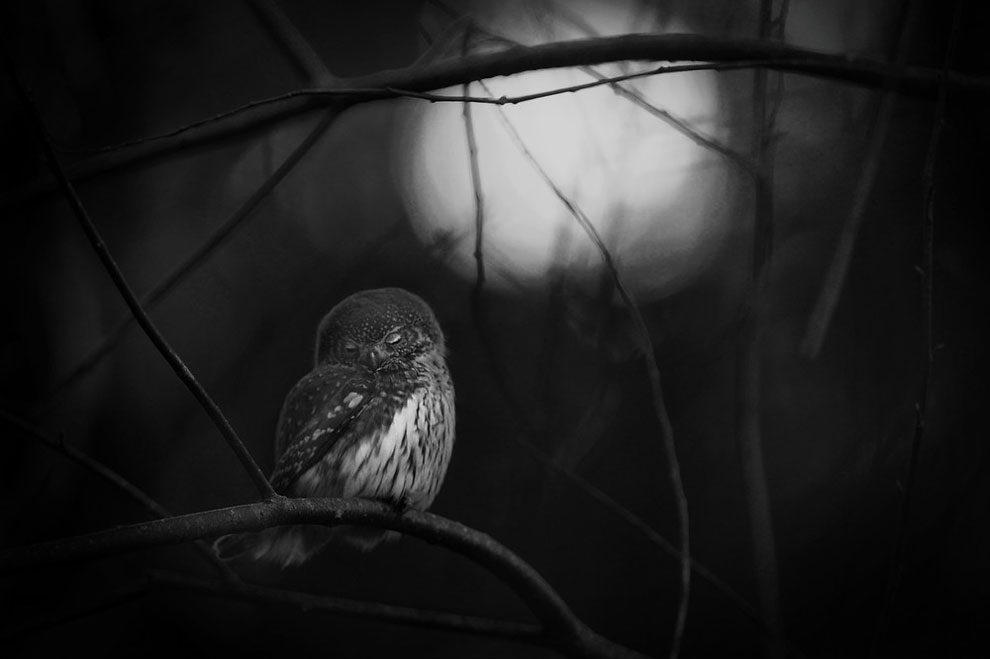 “Requiem for an owl”. Mats Andersson, Sweden Winner, Black and white category. Every day in early spring, Andersson walked in the forest near his home in Bashult, southern Sweden, enjoying the company of a pair of Eurasian pygmy owls – until the night he found one of them lying dead on the forest floor. “The owl’s resting posture reflected my sadness for its lost companion”, he said. Preferring to work in black and white – “it conveys the feeling better” – he captured the melancholy of the moment, framing the solitary owl within the bare branches, lit by the first light of dawn. (Photo by Mats Andersson/2016 Wildlife Photographer of the Year) 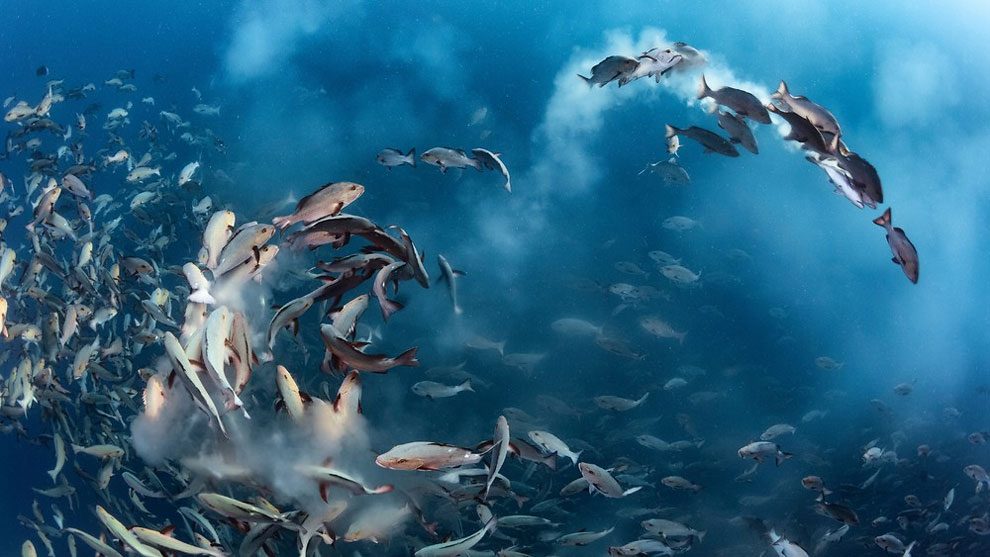 “Snapper party”. Tony Wu, US Winner, Underwater category. For several days each month, thousands of two spot red snappers gather to spawn around Palau in the western Pacific Ocean. The action is intense as the fish fill the water with sperm and eggs, and predators arrive to take advantage of the bounty. Noticing that the spawning ran “like a chain reaction up and down the mass of fish”, Wu positioned himself so that the action came to him. On this occasion, with perfect anticipation, he managed to capture a dynamic arc of spawning fish amid clouds of eggs in the oblique morning light. (Photo by Tony Wu/2016 Wildlife Photographer of the Year) 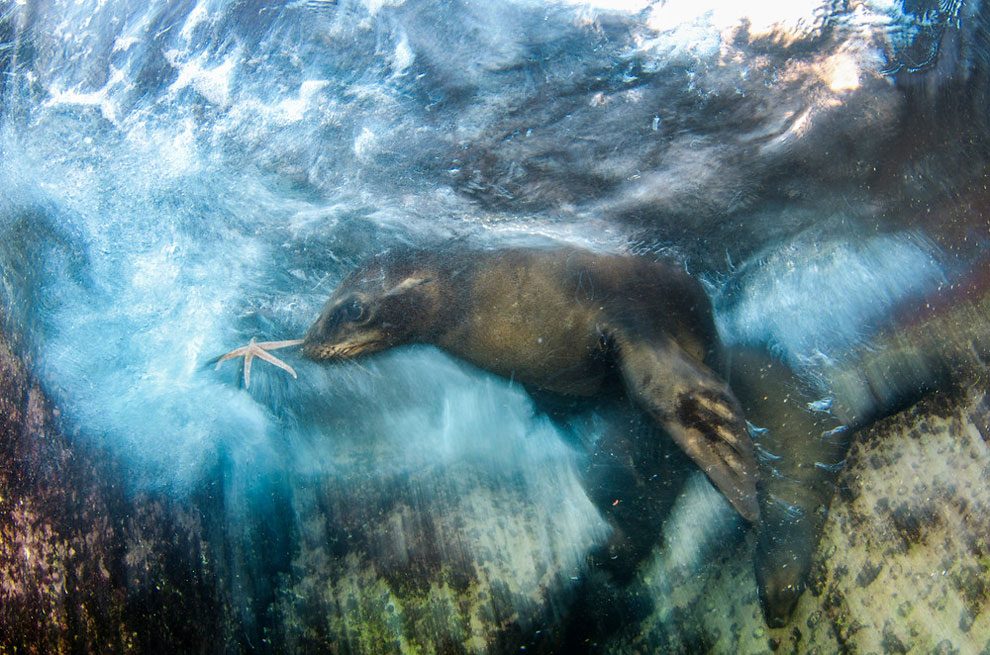 “Star player”. Luis Javier Sandoval, Mexico Winner, Impressions category. Curious young sea lions in the Gulf of California. One of the pups dived down, swimming gracefully with its strong fore-flippers, grabbed a starfish and started throwing it to Sandoval. As the pup was playing very close to the breaking point of the waves, Sandoval’s timing had to be spot-on. Angling his camera up towards the dawn light – just as the pup offered him the starfish and another youngster slipped by close to the rocks – he created his artistic impression of the sea lion’s playful nature. (Photo by Luis Javier Sandoval/2016 Wildlife Photographer of the Year)

The Captivating Underwater Photographs of Enric Adrian Gener
Amazing Single Photo Finalists Of London Street Photography Festival 2021
Stunning Travel Landscape Photography By Kyle Mijlof
The Best Photographs Taken With ‘Krappy Kameras’ In 2017
Photo of the Day: "I Am Your Father"
Daphne Guinness for Tatler Hong Kong, March 2012
Brilliant, Energetic and Skillfully Shot Images of Headbangers Mid-Bang
What Does The Ideal Man Look Like? The Answer May Depend On Where You Live
Hong Kong At Night In The 1960s Through Amazing Color Photos
Winners Of The Pink Lady Food Photographer Of The Year 2018 Announced
2014 Olympic Host City Sochi is a Strange Place
The Amazingly Detailed Living Pictures That Show How Scenes Throughout History May Really Have Looked
20 Weirdest Images on Google Street View
Amazing Surreal Photo Manipulations And Portraits By Dmitriy Rogozhkin
Tereza Chlebovska Crowned Czech Miss 2012
The Most Epic Entries From The 2016 National Beard And Moustache Competition
Gods & Beasts: Raw Portraits Show An Ambiguous Hierarchy Between Humans And Animals
These Winning Photos Of The 2018 Underwater Photographer Of The Year Contest Will Take Your Breath Away
Stunning Photos of Cher Taken by Richard Avedon for Vogue in 1966
China Fashion Week in Beijing
Rare Purple Crab Species Identified in Threatened Palawan Biodiversity
Nuke Town: Bizarre Colorized Photographs From The Los Alamos National Laboratory Photographic Archives
Whimsical Photos of Everyday Objects Playfully Reimagined Through the Eyes of a Child
Beautiful Photos of Julie Newmar as Catwoman in Batman TV Series, 1966–1968
Burning Man 2019 Mega-Post: Fantastic Photos From The World’s Biggest And Craziest Festival
Tiny Critter Becomes a Big Wheel
Winners Of The 2020 International Landscape Photographer Of The Year Competition Have Been Announced And They’re Mesmerizing
The Daily Life Of Darth Vader In 365-Day Photo Project
Stunning Finalists Of The Comedy Wildlife Photography Awards 2017
Breathtaking Aerial Photos Of A Lavender Field In Southern France By Samir Belhamra
photographer, wildlife, winners