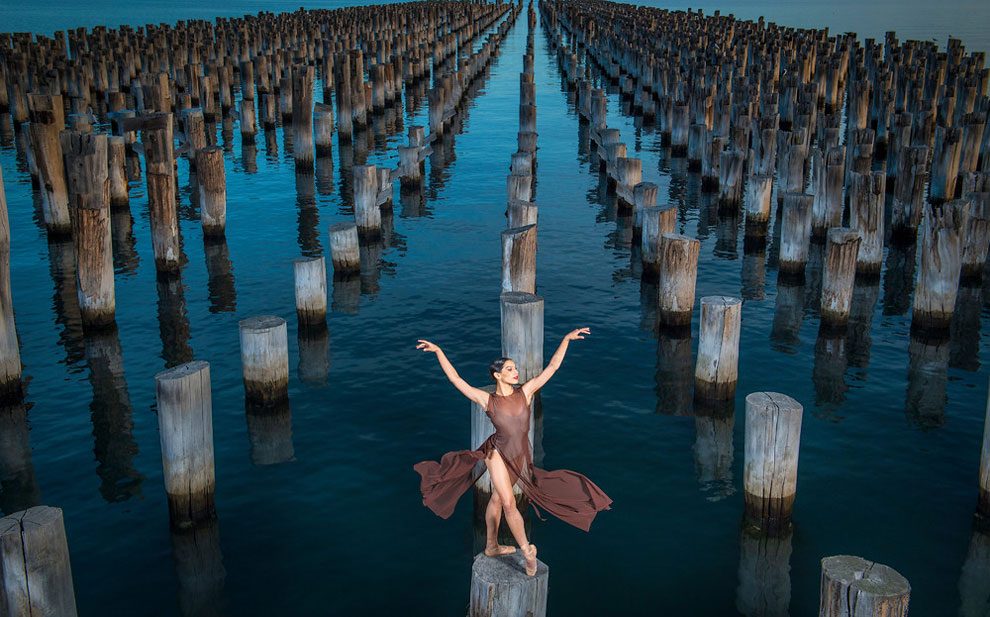 “Jason has beautifully captured a year of politics, sport and art in Australia. Through his lens he has also helped put a human face to social issues in the news”. Here, Melbourne Ballet Company dancer Kristy Lee Denovan is pictured at Princess Pier. (Photo by Jason Edwards/The Walkley Foundation) 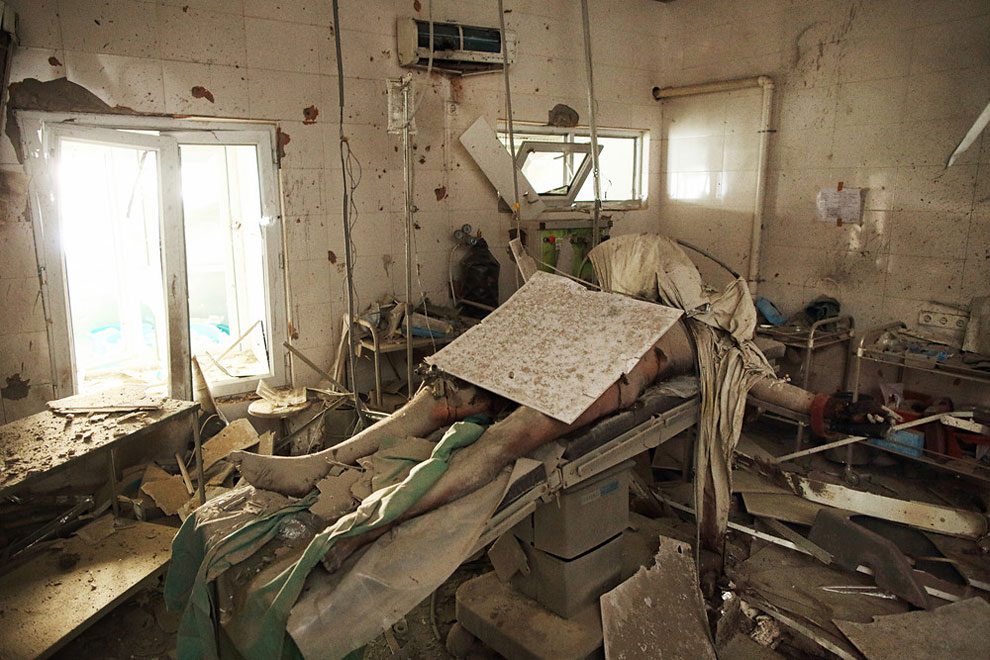 A patient, later identified as 43-year-old husband and father of four, Baynazar Mohammad Nazar, lies dead on the operating table inside the Médecins Sans Frontières Kunduz Trauma Center in Afghanistan, following the 3 October attack by an American AC-130 gunship on the hospital in which 41 were killed. “It’s an image to stop you in your tracks”, the awards team said. “Even before you know the background to the photograph, that single frame damns all the horror and devastation of war to destroy the innocent”. (Photo by Andrew Quilty/The Walkley Foundation) 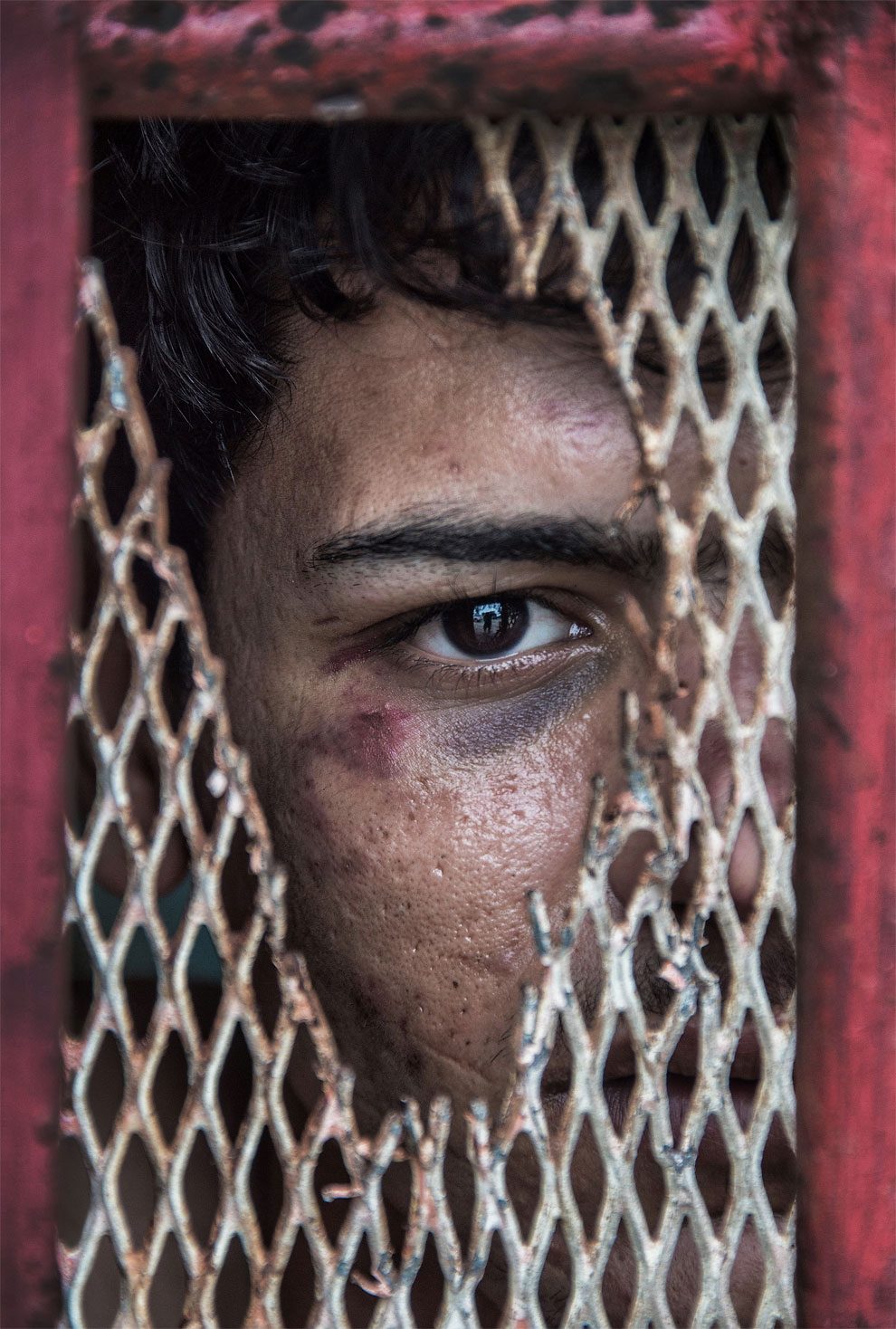 Iraqi asylum seeker Abdullatif Almoftaji stares through the wire of a police cell in the town of Lorengau, Manus Island in Papua New Guinea. Abdullatif was 17-years-old when he was first detained trying to enter Australia three years ago. He is pictured here in jail, having been arrested for allegedly trying to steal food while drunk, among other things. Cassey made the image through a hole in the cell wire. Later police caught Cassey trying to pass Abdullatif food and clothes and threatened to lock him up too. (Photo by Brian Cassey/The Walkley Foundation) 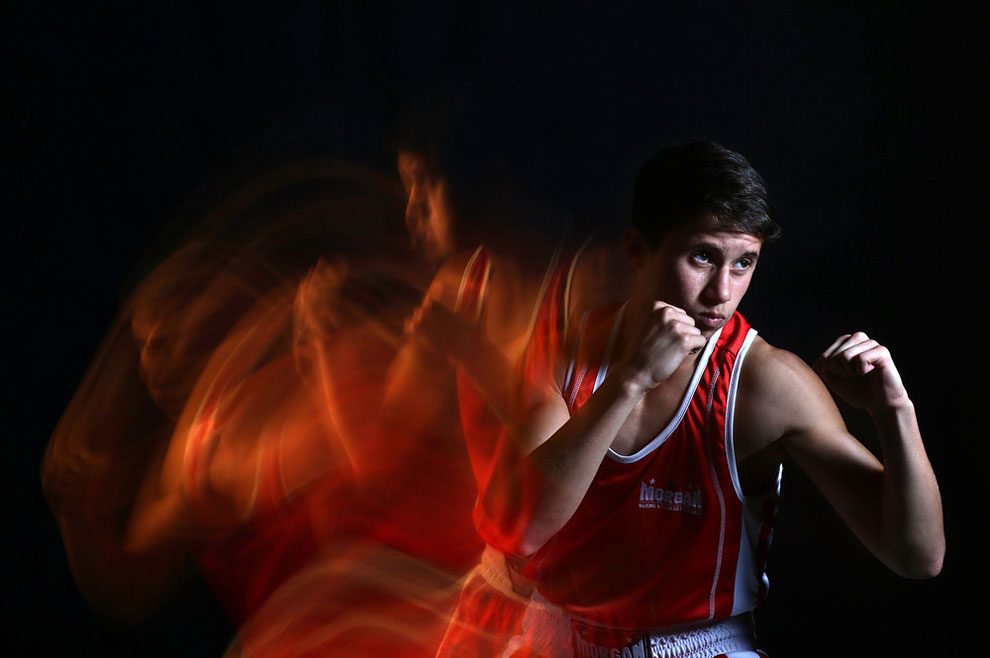 “Shooting photographs for a community paper requires skills across the board – catching split-second moments of sporting glory, knowing where to be for breaking local news, and finding creative ways to illustrate feature stories and eye-catching portraits”, said the awards team. “Marc McCormack excels at capturing his North Queensland community, having won this prize in 2013, and his portfolio this year shows the breadth of his skill”. This shot shows boxer Johnny Addo. (Photo by Marc McCormack/The Walkley Foundation) 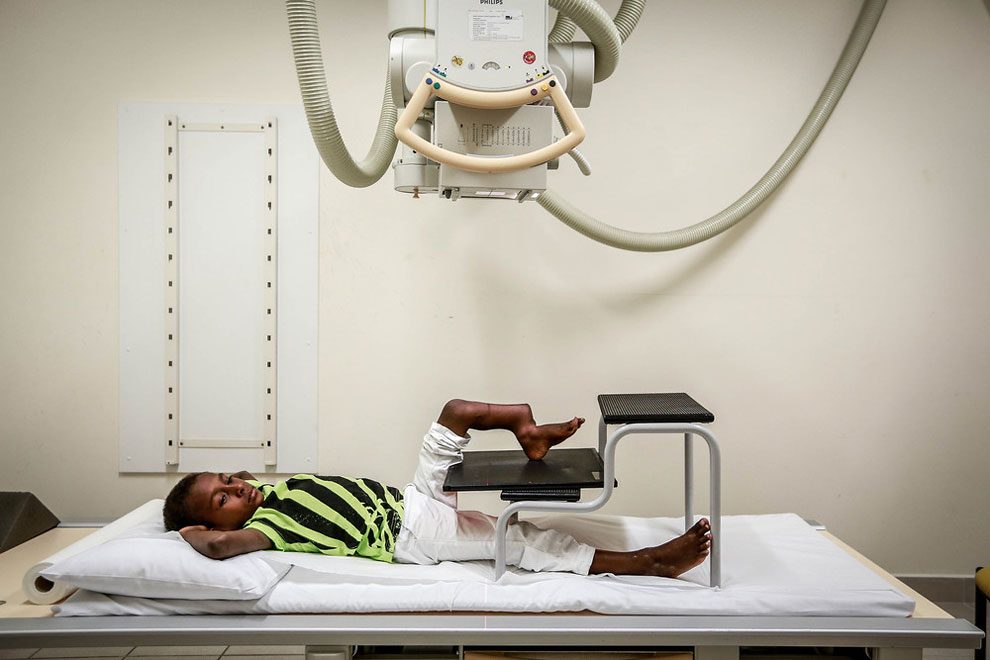 Eight-year-old Koko Makura is from a remote inland village of Popondetta in Papua New Guniea who has a jagged leg from an accident at home when he was two years old. He has been living at the farm in Victoria, Australia, in the care of the Children First Foundation with other children from around the world, waiting to have his life changing operation done and donated by St. Vincent’s Private hospital. (Photo by Eddie Jim/The Walkley Foundation) 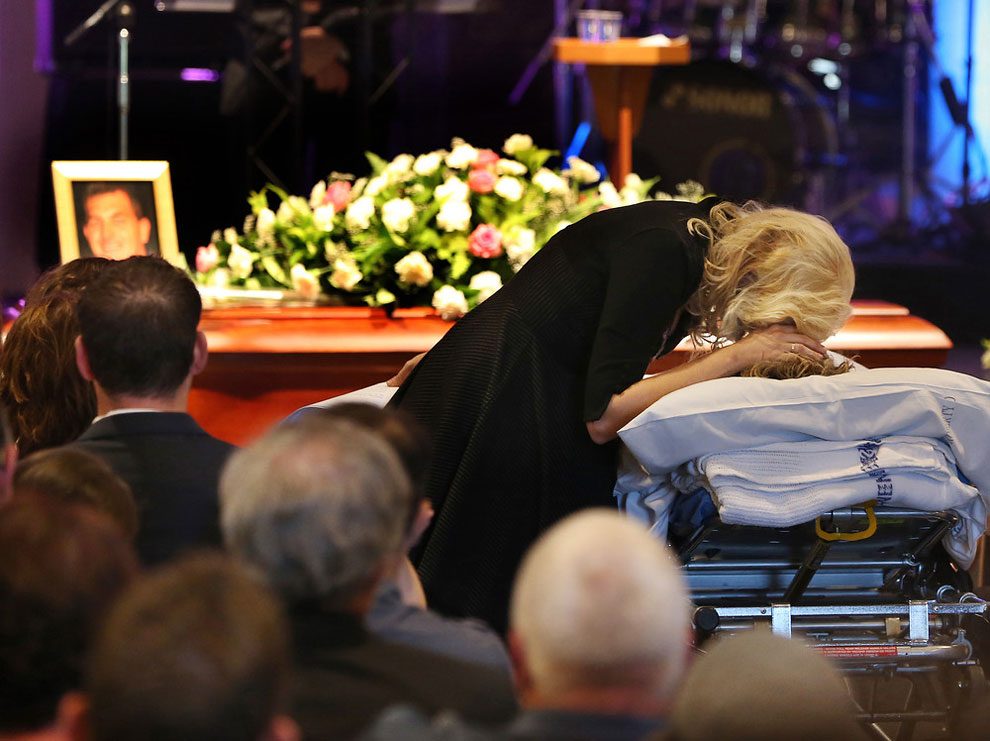 “It’s a heartbreaking and rare sight – a son wheeled in on a stretcher bed to his father’s funeral”, said the awards team. “The service was delayed so that 17-year-old Brendan Powell could attend from hospital after being injured in a crane collapse at Newstead that killed his father, aerial photographer Chris Powell. (This shot) captured a family’s loss and grief. The family revealed that his final, heartbreaking words to Brendan were: “Close your eyes, I love you”. (Photo by Annette Dew/The Walkley Foundation) 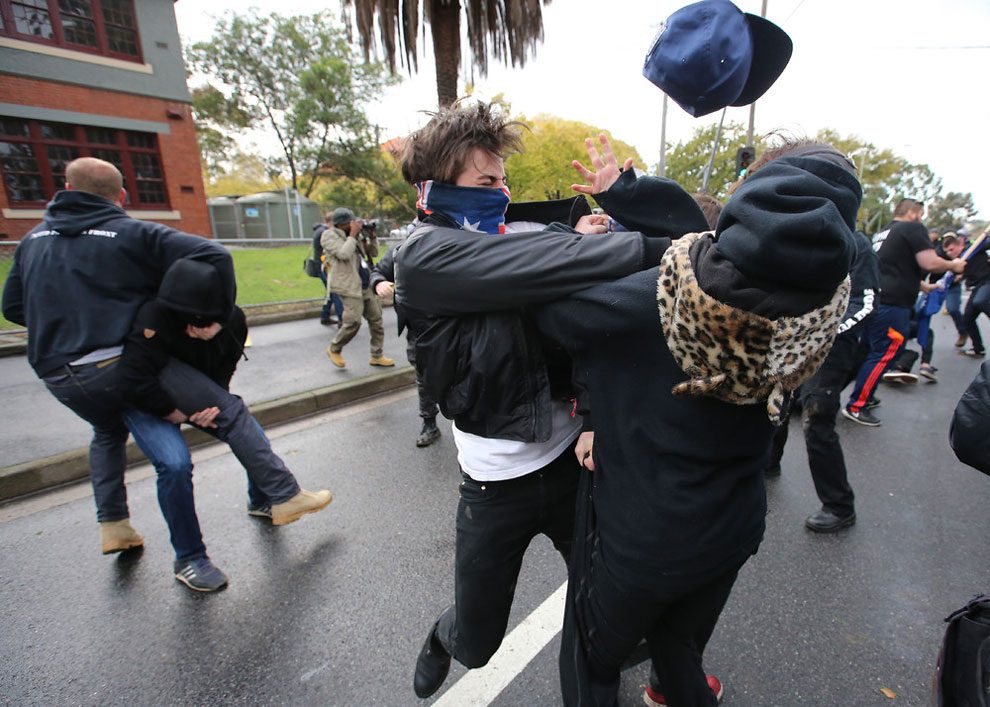 “A strong and diverse selection of images in this body of work show Alex Coppel’s technical skill and storytelling ability. He captures action in the sporting arena and violent clashes in the streets, dramatic weather and quirky daily life”. Here is a shot of a clash between United Patriots Front and anti racism protestors in Coburg – it shows a UPF member appearing to punch a woman. (Photo by Alex Coppel/The Walkley Foundation) 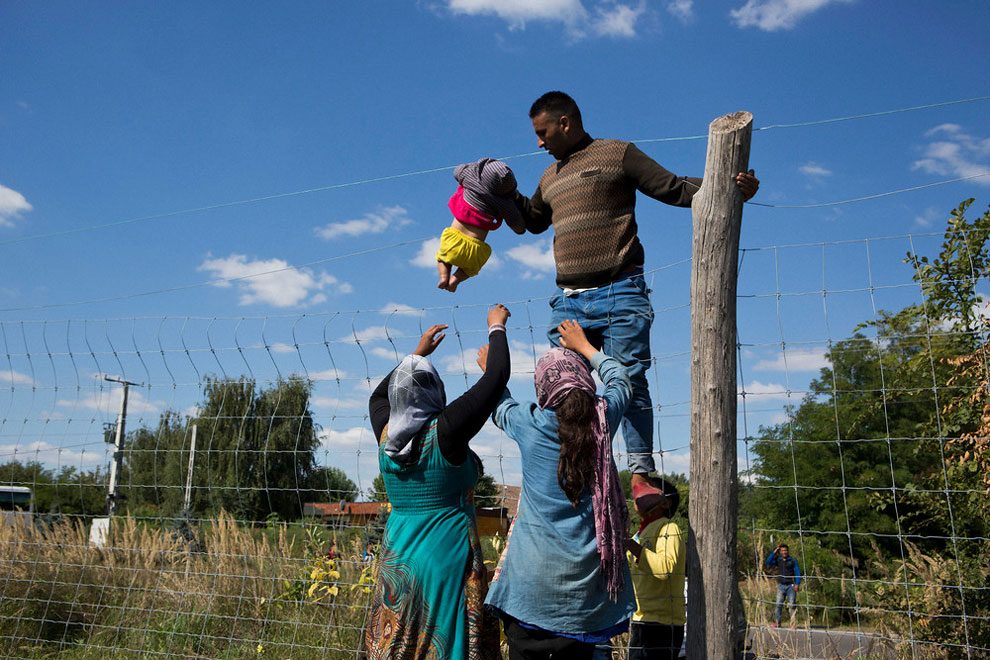 “In 2015 the world witnessed a scale of human displacement unseen since World War II as millions of men, women and children fled Syria, Iraq, Afghanistan, North Africa and elsewhere seeking safe haven. In a series that’s powerful from start to finish, photographer David Maurice Smith traces the desperation, despair and dignity of some of these journeys”. Here, a man lifts an infant over a fence running along the M5 motorway in Serbia. (Photo by David Maurice Smith/The Walkley Foundation) 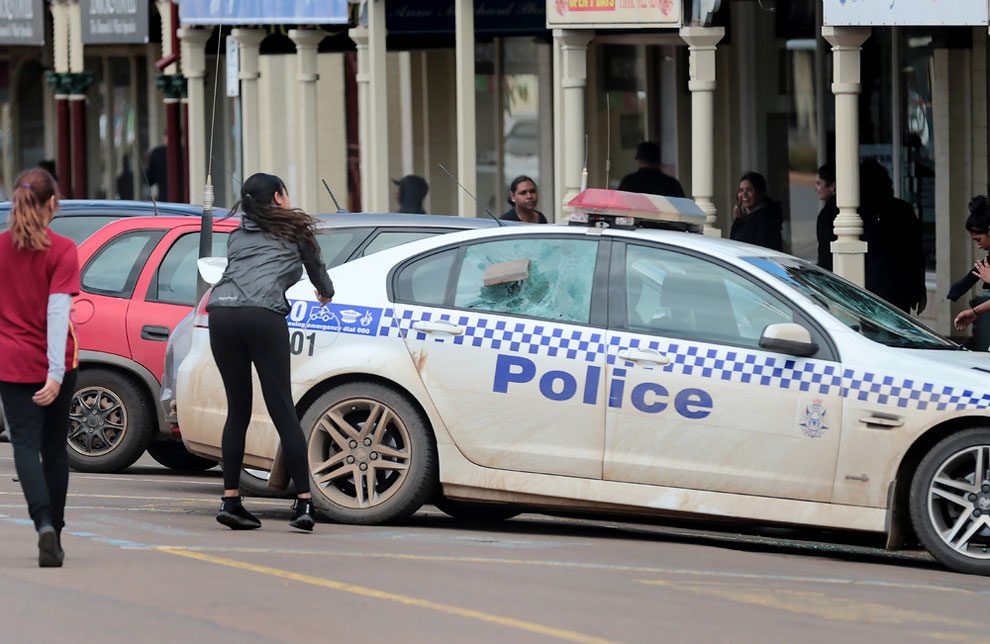 “After the death of a teenager (14-year-old Elijah Doughty), hundreds of Indigenous locals took to the streets of Kalgoorlie to vent their anger. Danella Bevis captures the grief and outrage of a family and a community. There is raw aggression in an eruption of racial tensions and violence, and in stark contrast she concludes the narrative with a moment of quiet beauty at a dusk vigil”. (Photo by Danella Bevis/The Walkley Foundation) 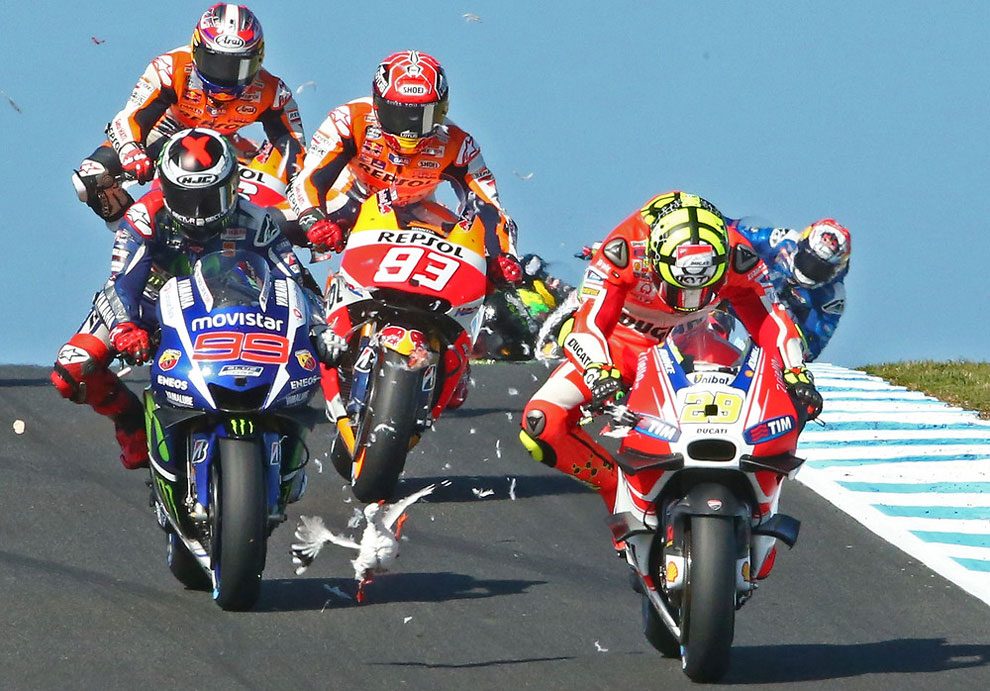 “Scott Barbour nails the peak moments of action across a range of sports, with artistic as well as newsworthy images from the Australian sporting year. Feathers flew when Barbour captured a dramatic collision from the 2015 MotoGP of Australia”. Barbour says: “Luckily for (Andrea) Iannone he survived the impact with no harm to himself or his bike. The seagull, on the other hand, was not quite so lucky!”. (Photo by Scott Barbour/The Walkley Foundation) 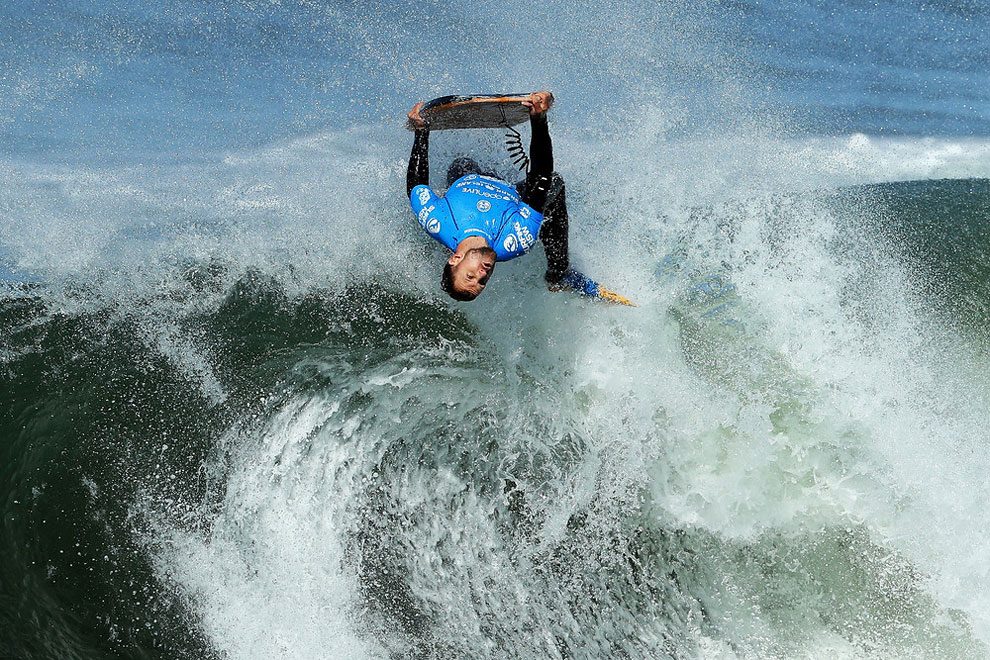 “Spencer knows a thing or two about defining moments. If you saw one image from the Rio Olympics, it was probably his shot of a grinning Usain Bolt leading a pack of sprinters. In this body of work Spencer also seeks out such moments in football, tennis and on the waves”. “The defining moment is the split second when something magical happens in sport, when a game hinges on a play, or a race is remembered by a moment that fleets in a millisecond”, Spencer says. Here’s a shot of Jason Finlay at the 2016 Shark Island Challenge. (Photo by Cameron Spencer/The Walkley Foundation)