Stunning Images From The UK Wildscreen Festival 2016, The Internationally Renowned Festival That Celebrates And Advances The Art Of Natural World Storytelling

The Wildscreen festival is the world’s biggest celebration of screen-based natural history storytelling which takes place every two years in Bristol. 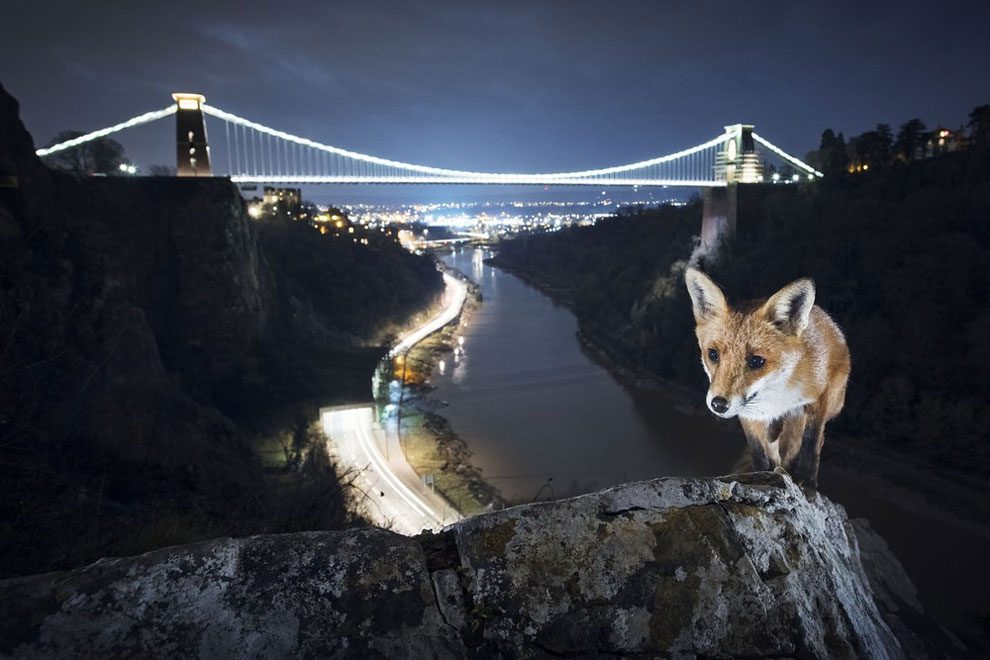 “At this recognisable landmark in front of the Clifton suspension bridge I found a secluded spot where teenagers like to hang out and local foxes would come to look for leftovers. One night, I was setting up my camera in the early evening and a fox came out of the shadows. It came straight over, looked up at me, then proceeded to try and pinch something from my open camera bag. After that, it walked up this small ridge and I saw the picture I wanted to capture. It took about two weeks of long, cold nights before it looked up at just the right moment”. (Photo by Sam Hobson/Wildscreen 2016) 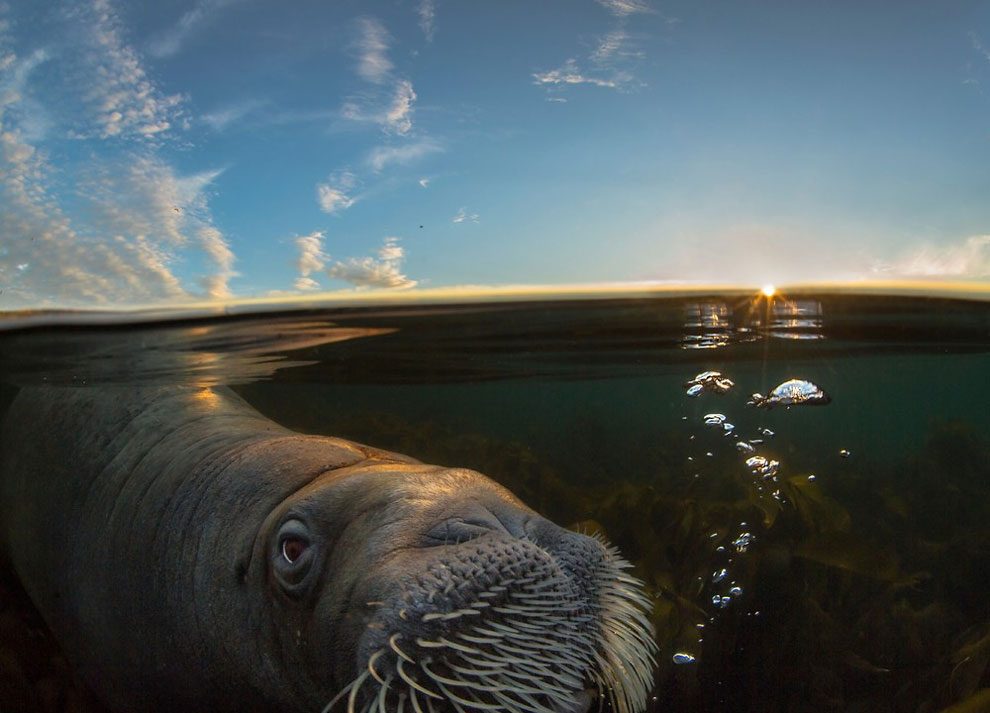 Walrus feed mostly on bivalves in productive, shallow and often sandy habitats in the Arctic. This individual, though, arrived on a beach outside Tromsø, northern Norway, and found comfort on a stranded dead sperm whale. After two weeks he approached Audun, and only half a metre away he stretched his tusk forward and touched his hand gently. “This was one of the most memorable moments of my life”, Rikardsen says. He named the 500kg male Buddy. After two months, the dead whale was decomposed and Buddy suddenly disappeared. (Photo by Audun Rikardsen/Wildscreen 2016) 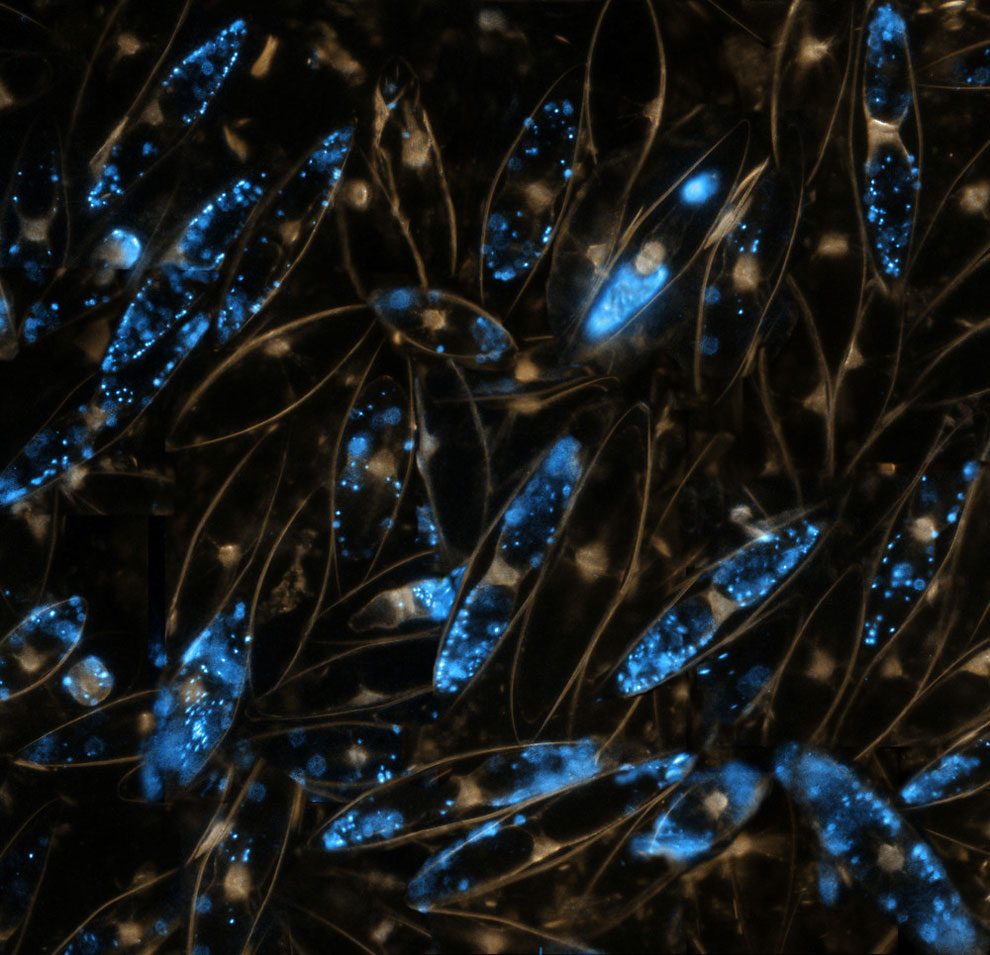 These are one of the many species of dinoflagellate whose beautiful blue flashes light up oceans on dark nights. Their light is produced in special “organelles” within the 1/2mm single-celled organisms, but only when they are disturbed. Trying to get them in focus in a microscope whilst disturbing them so they will flash took hours of trial and error, but the biggest problem was simply having a camera sensitive enough to record the flash. (Photo by Martin Dohrn/Wildscreen 2016)

“Lynx on the Brink” 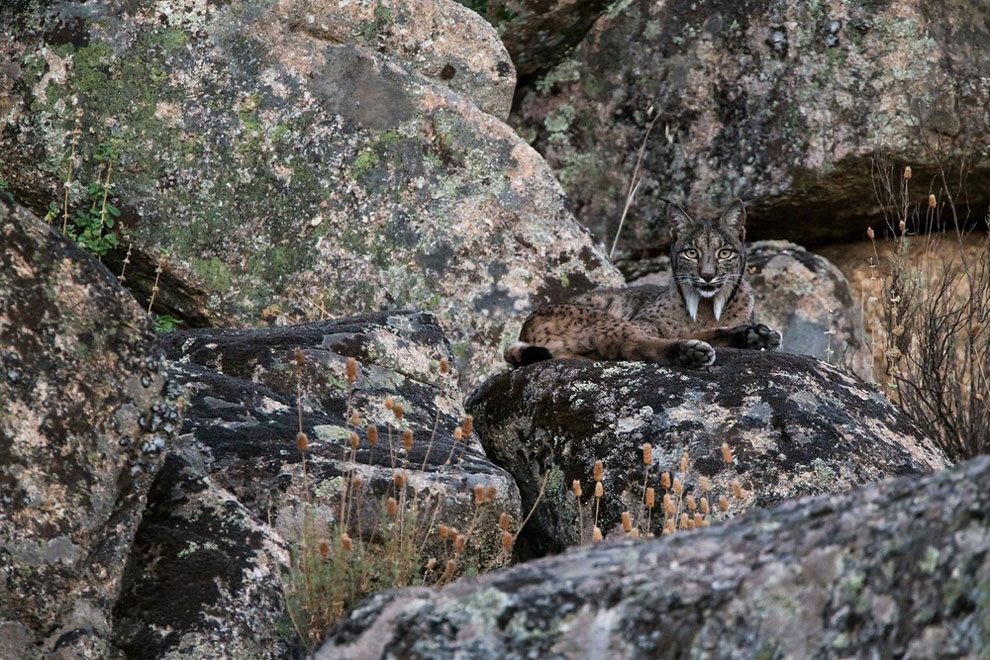 “In 2001 there were less than 100 Iberian lynx left in the wild. Fifteen years later there are now more than 400, but it is still, unfortunately, the rarest cat in the world. Predominantly nocturnal, the lynx were tricky to find, and as this picture shows, they’re perfectly suited for the rocky landscapes they call home, blending seamlessly into the boulder-strewn landscape. When you do find one there is no real way of describing the elation of being in the presence of such a stunning and rare cat”. (Photo by Luke Massey/Wildscreen 2016)

“The Panda of Spiders” 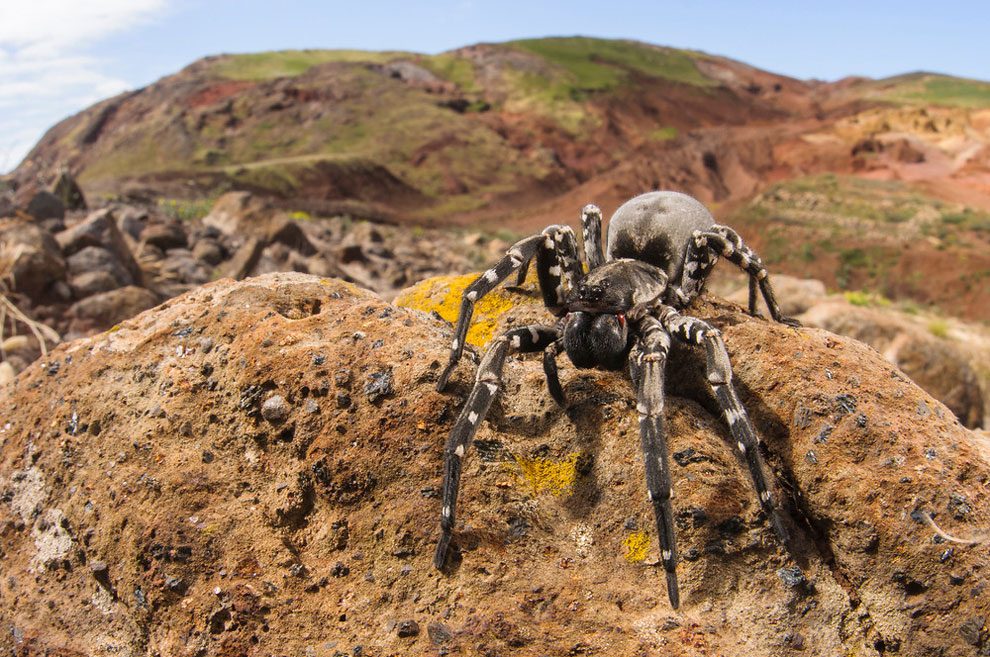 “When I discovered that the biggest wolf spider of Europe, perhaps the biggest in the world, lived in a single very small valley on a very small island of the Madeira archipelago I craved to see it in person and tell its story. But it’s a bittersweet story, because this “panda of spiders” is listed as critically endangered on the IUCN Red List and conservation efforts are being carried out to ensure its survival. A small colony has been taken in at Bristol Zoo Gardens as part of their conservation programme”. (Photo by Emanuele Biggi/Wildscreen 2016) 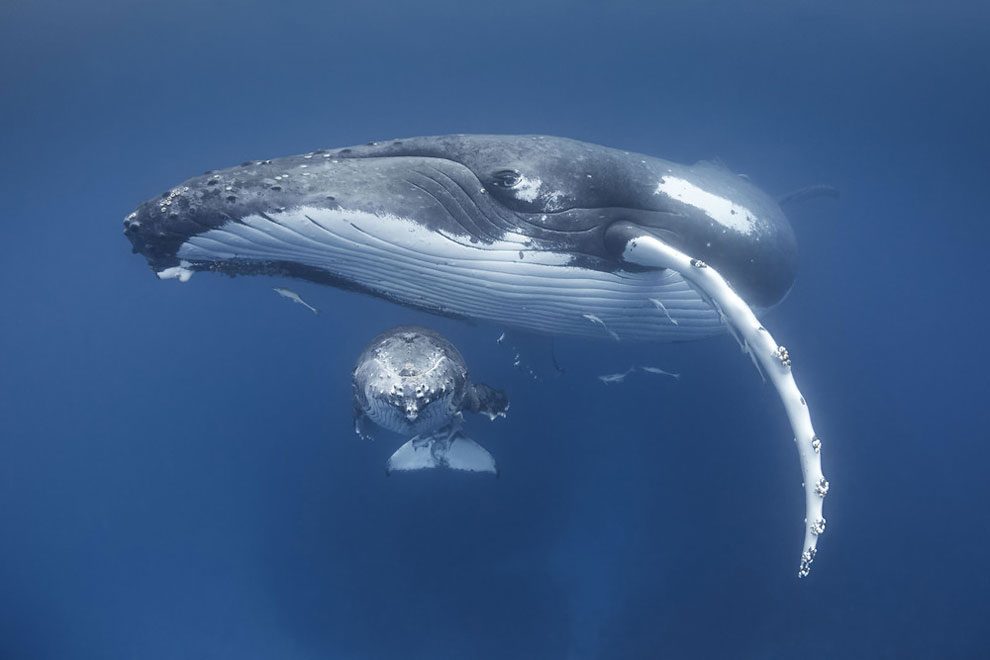 “The most important relationship in a young humpback whale’s life is the one with its mother. Juveniles depend entirely on their mothers for survival for the first 10 months or so of life. This little boy, though ever eager to play and explore, always returned to the safety and comfort of his patient and doting mother”. (Photo by Tony Wu/Wildscreen 2016) 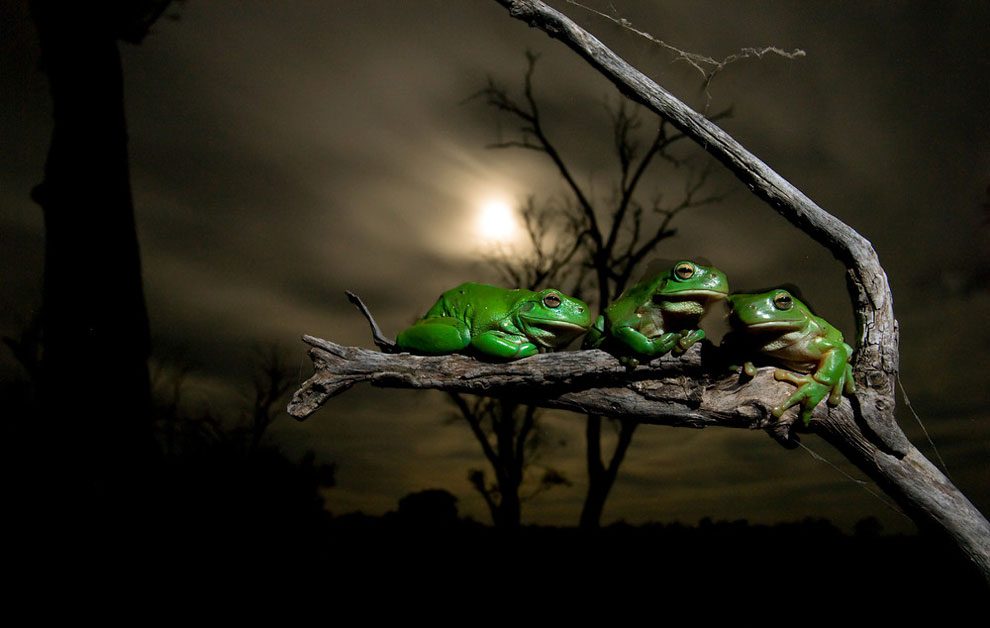 “After by a flood of rejuvenating rains, thousands of green tree frogs emerged upon the moonlit landscape of Australia’s Macquarie marshes to breed. These frogs were photographed after a biologist had collected and measured them, looking to understand more about the intricate relationships between amphibians and the water flows within the marshes. Because of the important role frogs play in ecosystem health, the study hoped to gain knowledge that could then be applied to help improve environmental water allocation management in the Murray Darling river basin”. (Photo by Dave Herasimtschuk/Wildscreen 2016) 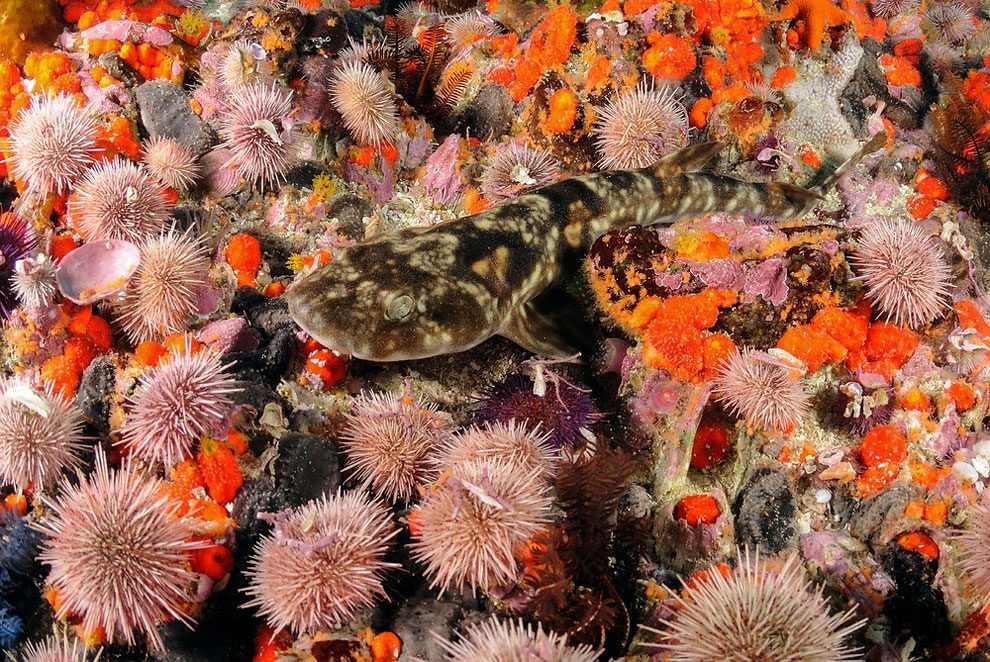 “False Bay on the southern tip of South Africa is well-known for its winter breeding season of Cape fur seals and great white sharks. Although I had arrived to photograph the whites, during periods of rough weather I spent my time diving in protected bays and was surprised to find colourful temperate marine gardens of undersea life. One of the highlights was this small puffadder shyshark, which starkly contrasted with my original photographic quarry, but reminded me of the rich diversity and form of the 450 or so species of sharks in our oceans”. (Photo by Justin Gilligan/Wildscreen 2016/Save Our Seas Foundation) 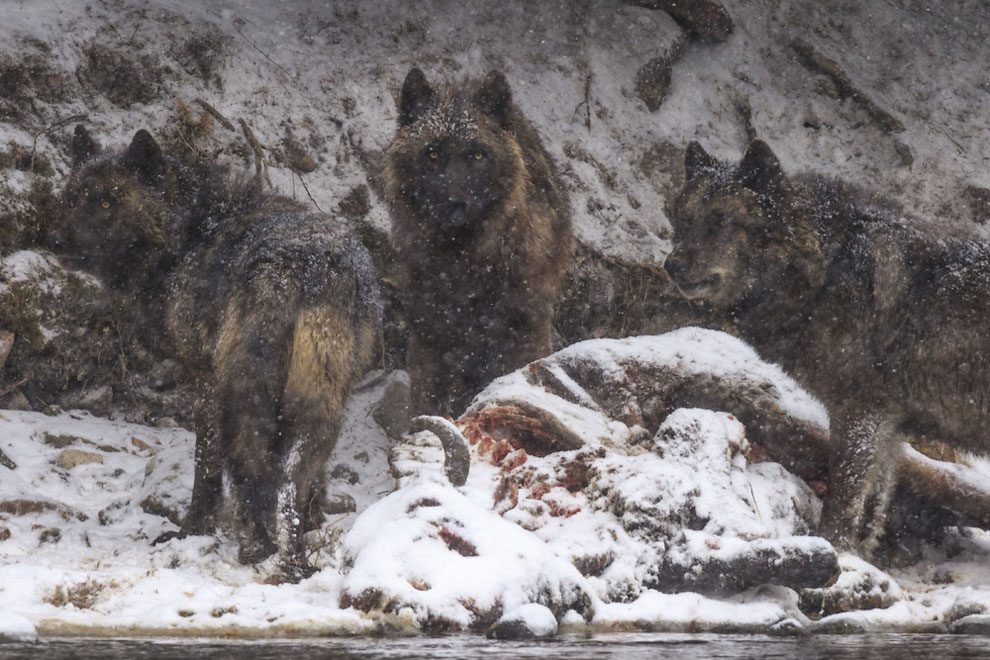 “My first assignment with National Geographic magazine was to cover the wolves of Yellowstone national park. As the winter came to an end and the ice began to break up along the Yellowstone river, a bounty of drowned bison carcasses was revealed along the shore. After a week, this alpha female (on the left) with her one-year-old offspring emerged through a blizzard and began feeding, allowing me to capture an image that I’d only dreamed possible”. (Photo by Ronan Donovan/Wildscreen 2016)

The Line - Aftermath
Winners Of The 2020 International Landscape Photographer Of The Year Competition Have Been Announced And They’re Mesmerizing
2015 National Geographic Traveler Photo Contest Winners
Amateur Photographer Captures Minimalist Photos Of Beautiful Berlin Architecture
2014 National Geographic Photo Contest, Week 3
Beautiful Photos of Jane Birkin at Home Taken by Jean-Claude Deutsch in 1971
The Associated Press: Best of 2014 from Latin America, Part 1
Beautiful Vintage Photos Of The Circus Girls Of Sarasota Taking A Break In 1949
Photographer Took Photos Of Pan Bottoms, Which Are Visually Similar To A Planet’s Surface
"Mercury Ahead!": The BepiColombo Mission Has Captured Its First Views of Planet Mercury
A Photographer Took Stunning Portraits Of Beautiful Women With Their Eyes Shut
Heartwarming Photos of KISS Posing with Their Parents in 1977
Breathtaking WWII Colorized Photos Look Like They Were Taken Yesterday
Before The Great Clean-Up Began, Here Is Another Side Of New York In The 1970s That You May Never Know
This Photographer Transformed Kids Into 'Justice League' Characters, & It's The Best Thing You Will See Today
"One Day with Salvador Dalí": A Surreal Photo Shoot of Salvador Dalì in His Seaside Villa, 1955
Vintage Photos Of People Wearing Masks During The 1918 Influenza Pandemic, One Of The Deadliest Natural Disasters In Human History
2015 National Geographic Traveler Photo Contest – April selects
Undertaker Couple Take Coffin-Themed Wedding Photos
Futuristic Deserts In Andalucia By Al Mefer
Powerful Photos Document Poor Housing Conditions And The Lives Of People Living In Slums In Glasgow In The Early 1970s
Beautiful 'Then And Now' Pictures Of Women From London's '80s Subcultures
Cherry Cake
Beautiful Portraits Of Rare And Endangered Birds That Look Simply Stunning
festival, images, internationally, renowned, stunning, wildscreen