The winning images from the 2019 Australian Geographic Nature Photographer of the year contest have been revealed. 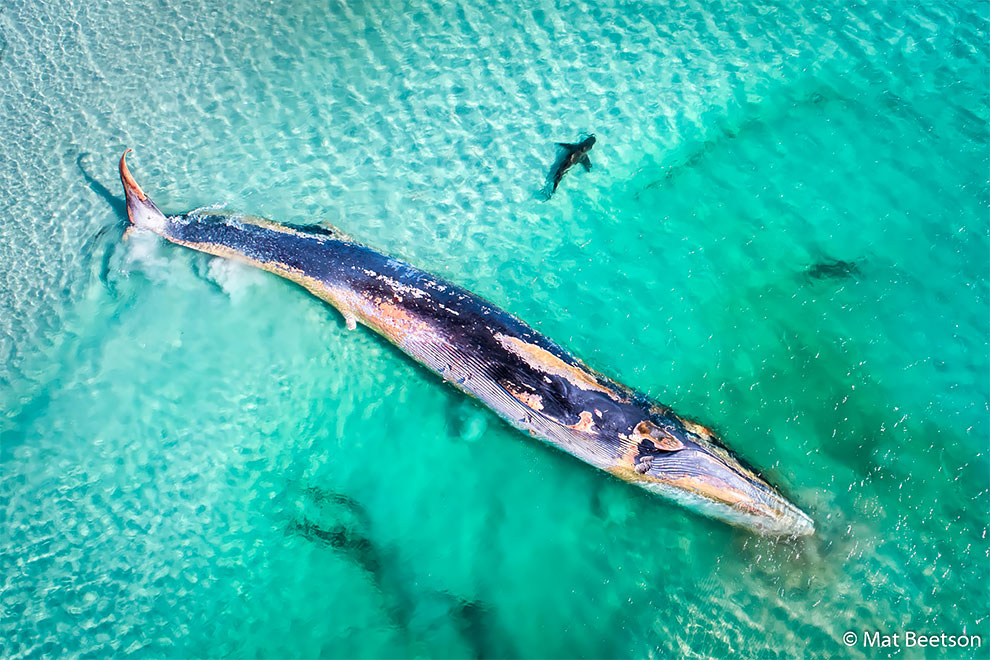 Overall winner. Fin whale’s demise. Fin whale.
The fin whale is sighted regularly in this region; seeing one beached, however, is rare. The whale sits less than 5m from shore and 100m from residential homes, giving whale researchers access to an unusual occurrence for this species. Bronze whalers and great whites feasted over the remains before removal. Photo Credit: Mat Beetson, Western Australia 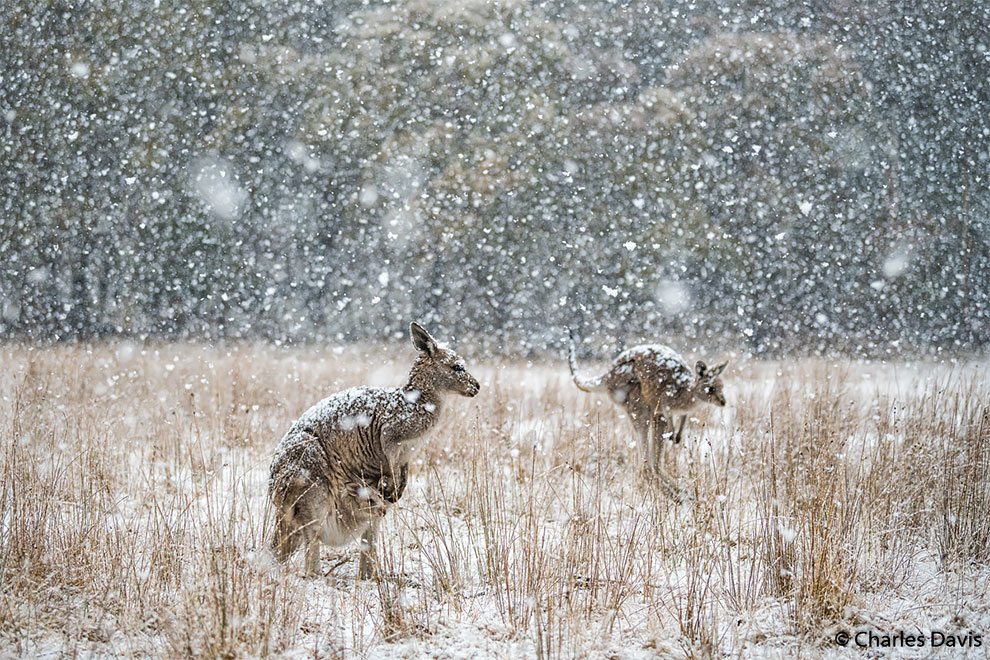 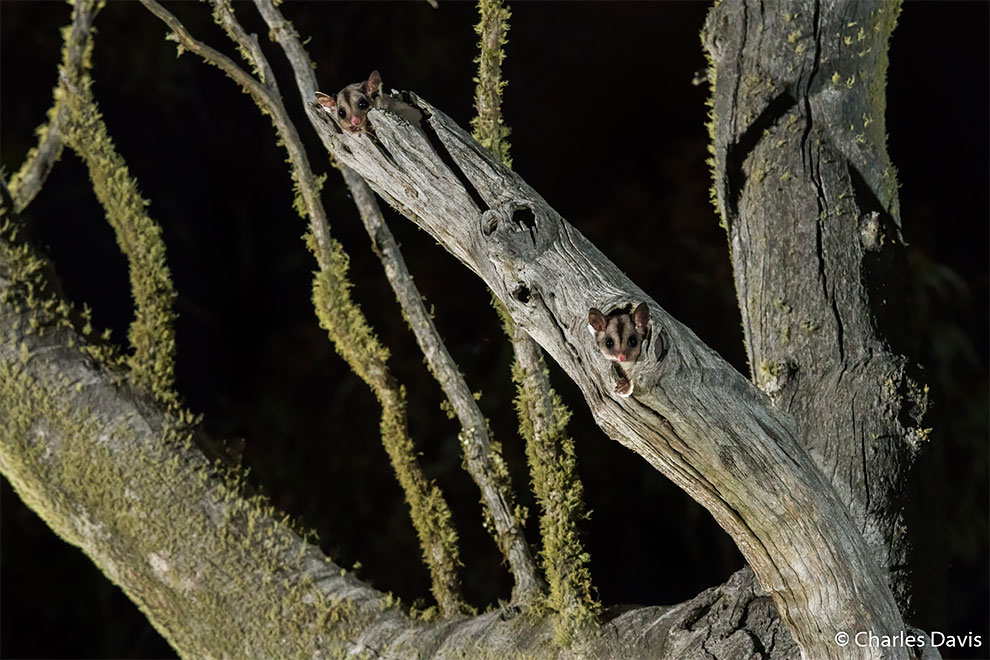 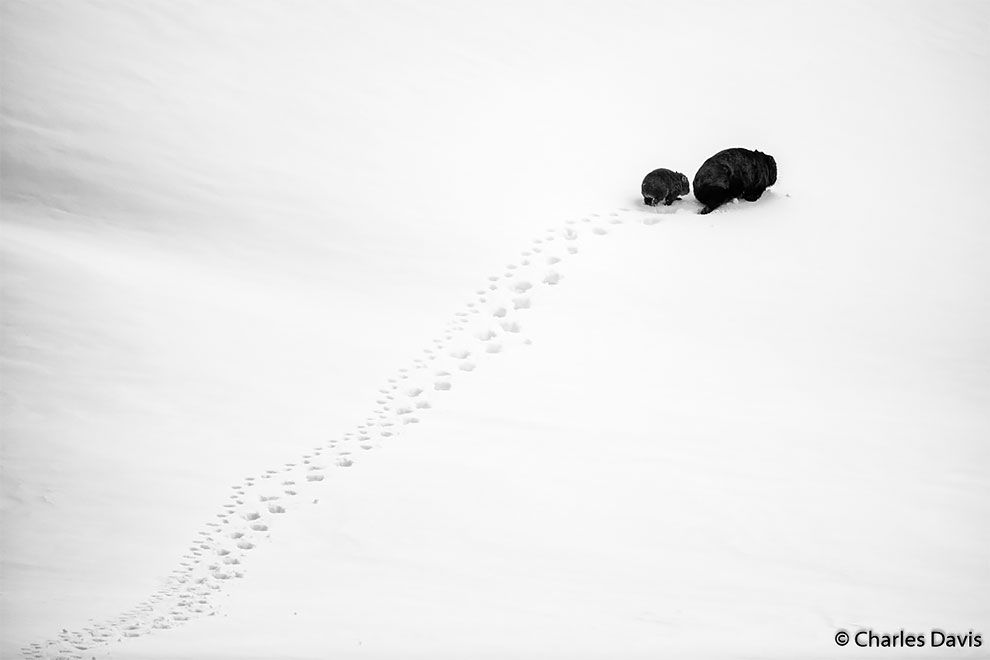 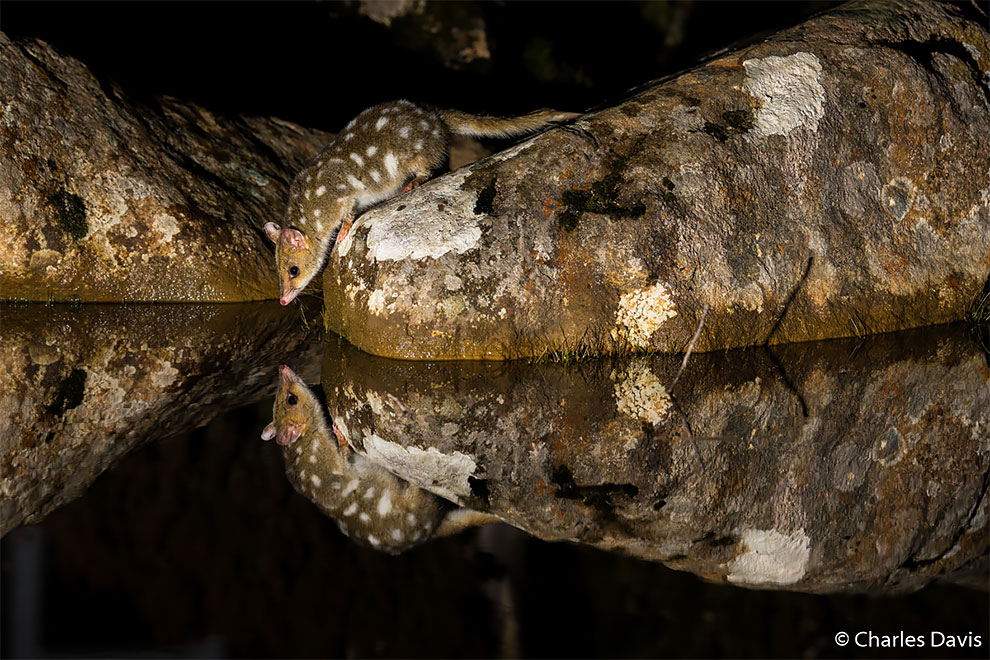 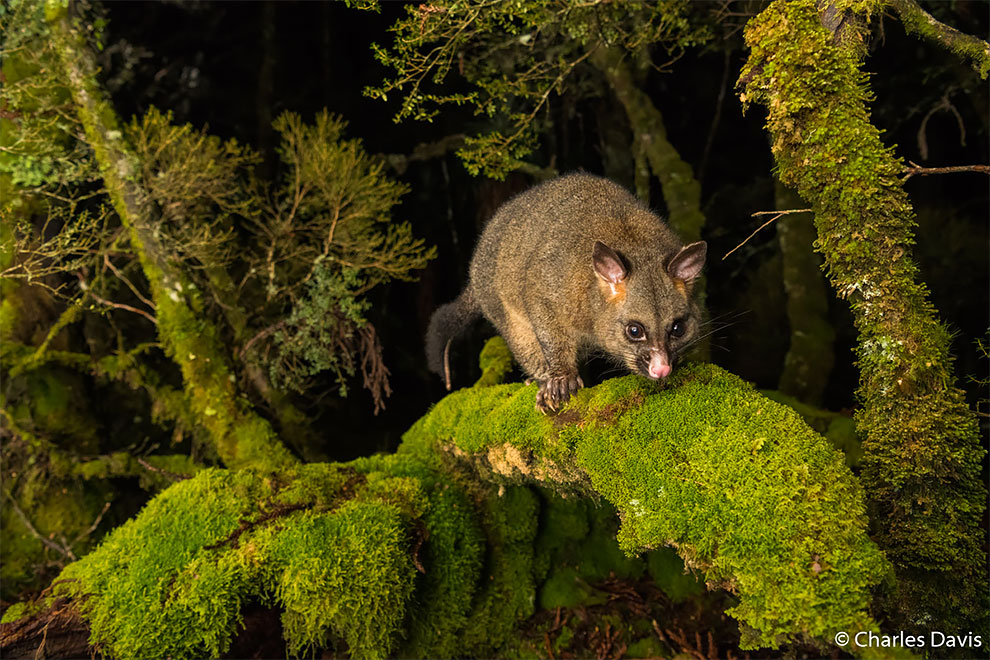 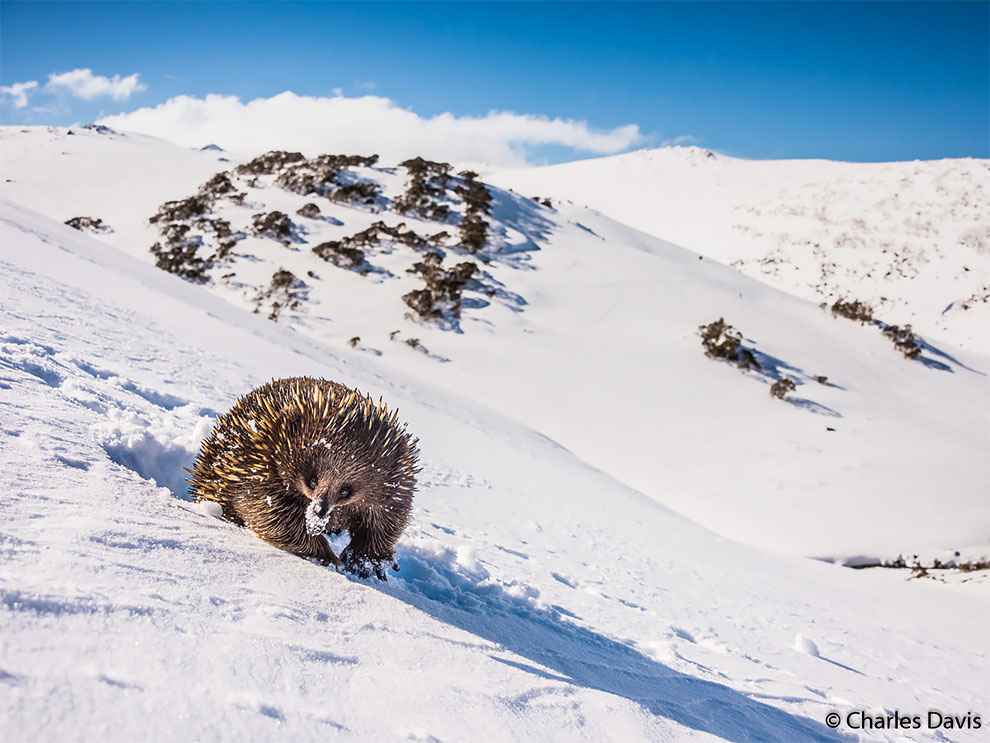 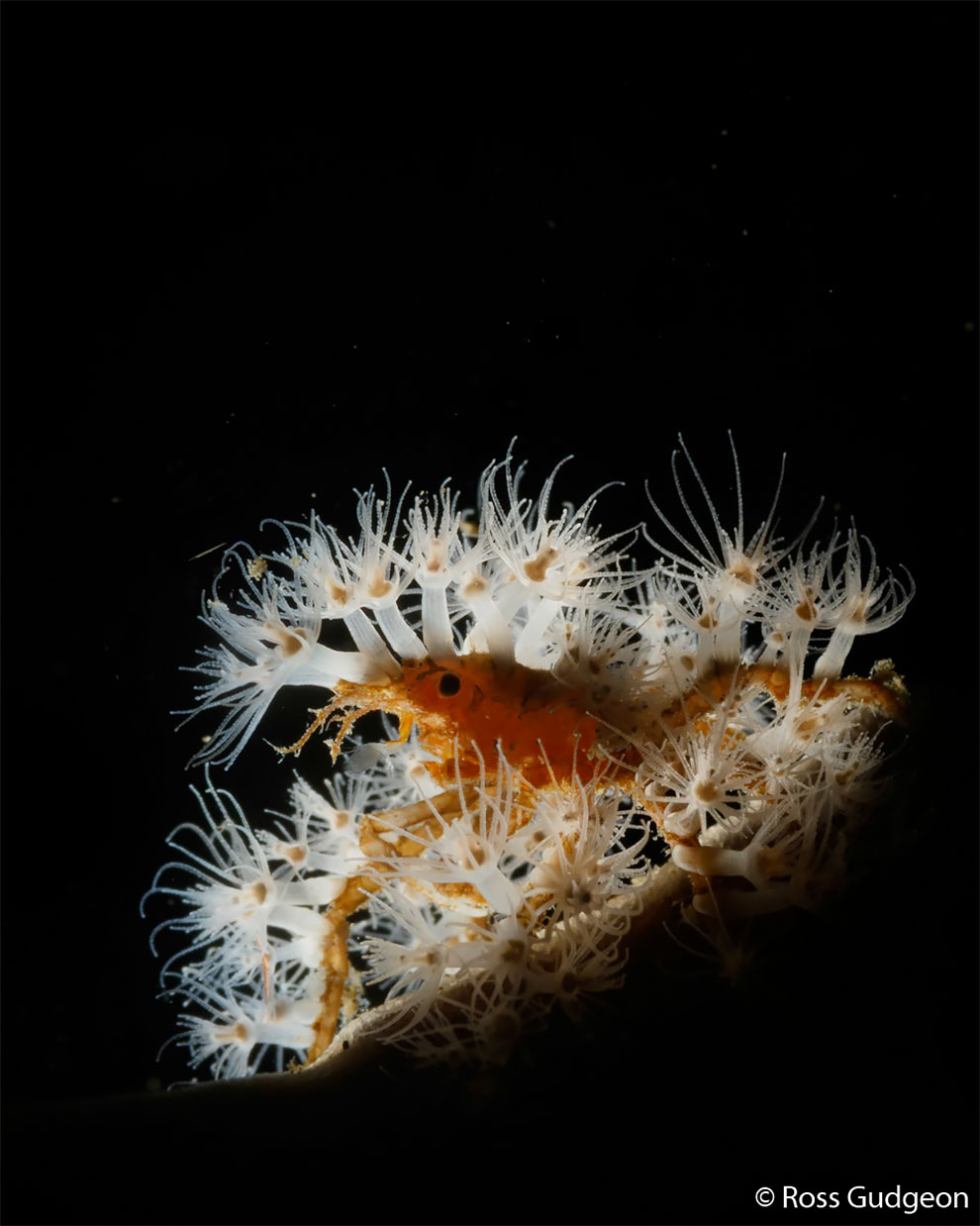 Animal portrait: winner. Decorator crab.
Typically, decorator crabs attach pieces of sponge and seaweed to themselves to camouflage and hide from predators (which makes them very poor photographic subjects). However, Achaeus spinosus attaches stinging hydroids to itself to ward off potential predators (making it a very attractive subject for photography). Photo Credit: Ross Gudgeon, Western Australia 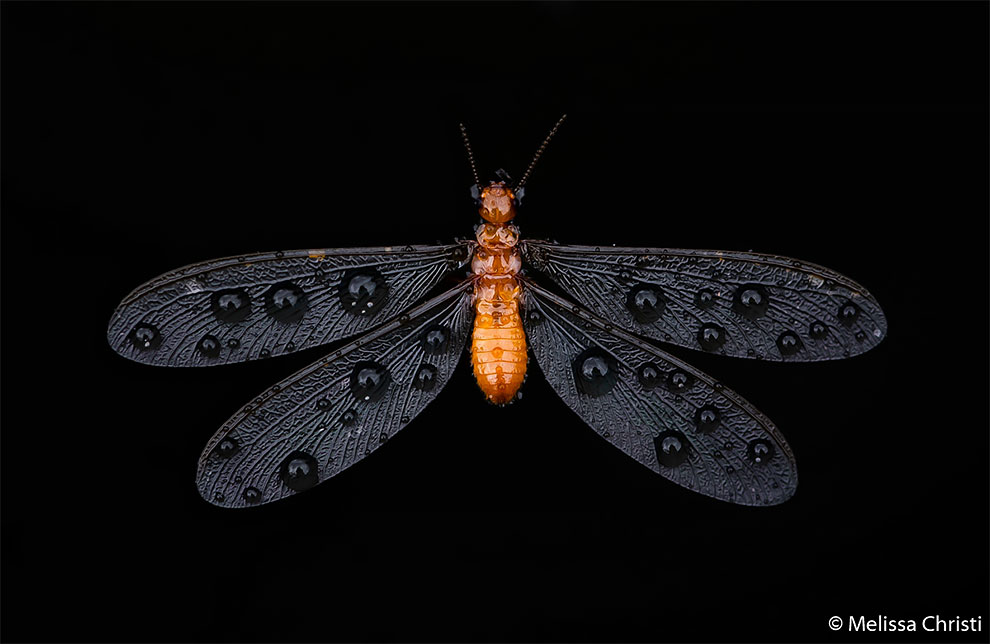 Animal portrait: Runner-up. Bride in the bath. Termite.
Storms finally broke the dry grip of drought, creating perfect conditions for termite nuptial flights. Making the most of their small window of time, some were lucky, but others were not – like this termite alate. Entranced by the reflective surface, it was trapped by the pond. Serenely beautiful in death. Photo Credit: Melissa Christi, Queensland 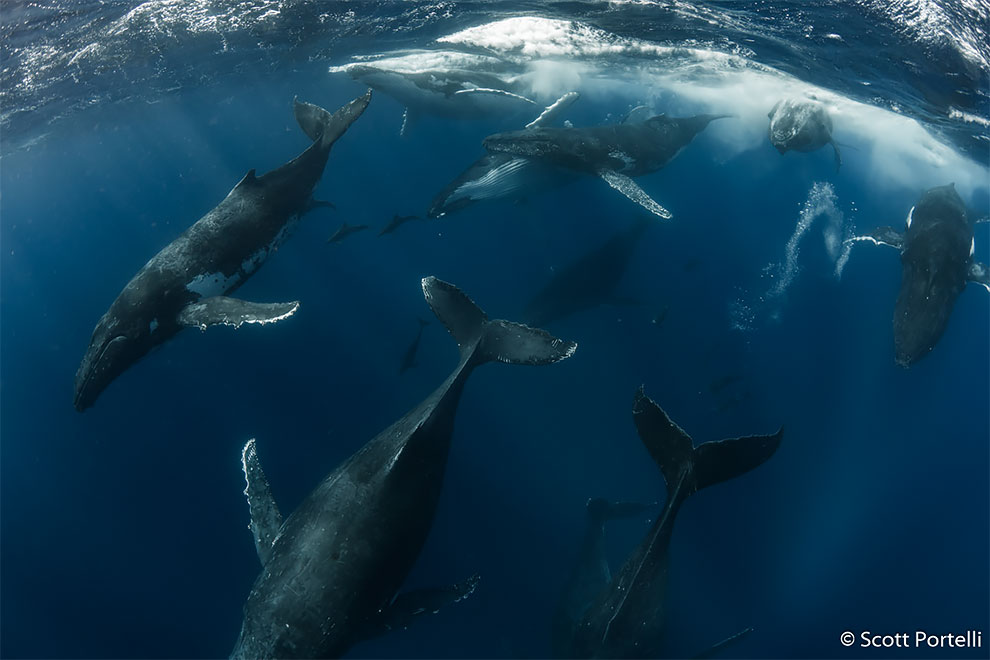 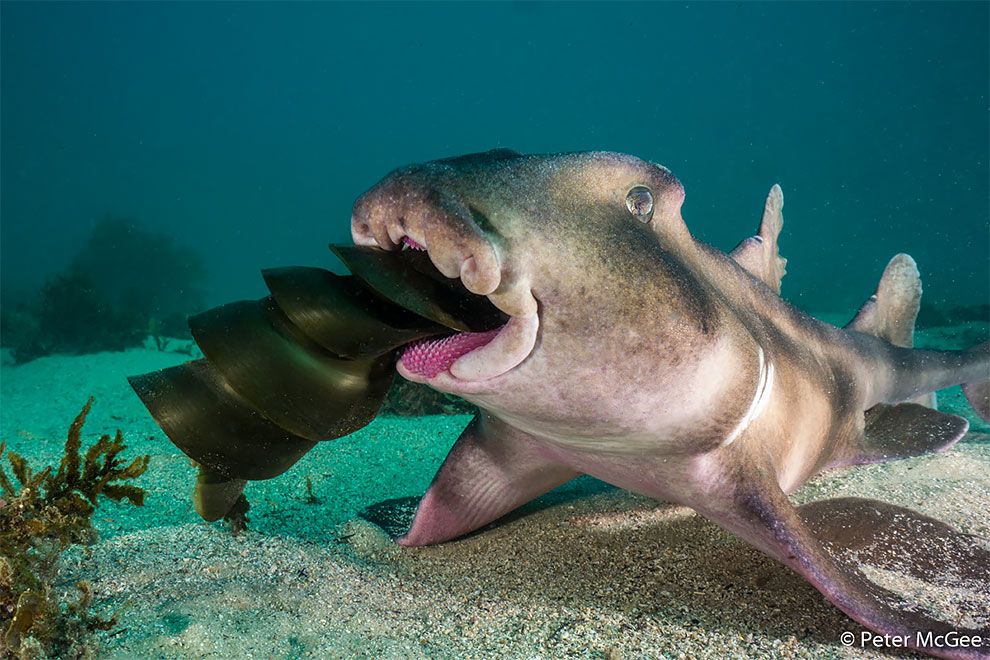 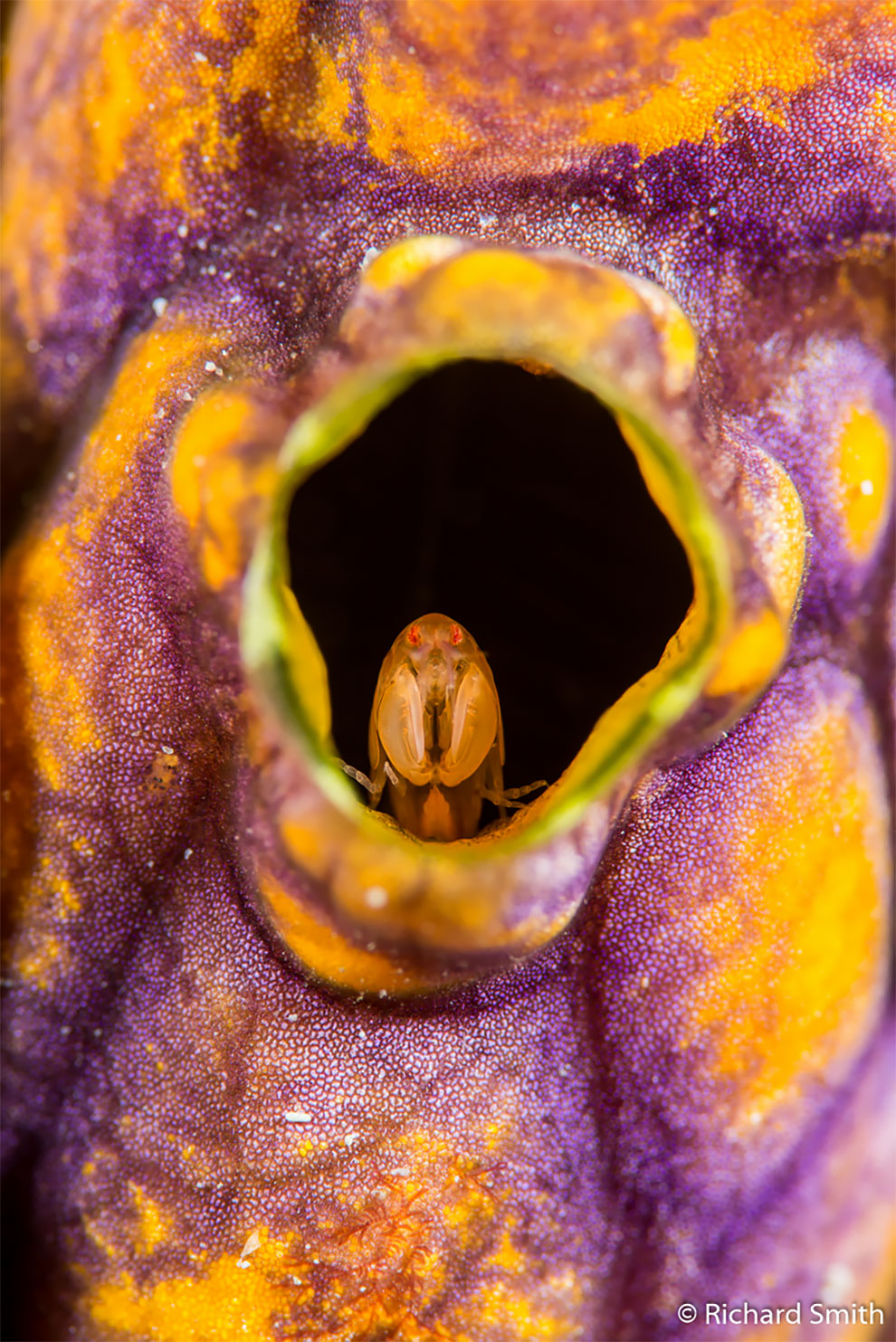 Animal habitat: winner. Small but mighty. Commensal amphiod living in solidarity ascidian.
I was searching for miniature pygmy seahorses on the reefs of West Papua when I happened across this tiny amphipod crustacean. Just 0.5–1cm long, this male is sitting at the mouth of the sea squirt to guard the females and young within. According to an amphipod expert, this is likely a new species. Photo Credit: Richard Smith, United Kingdom 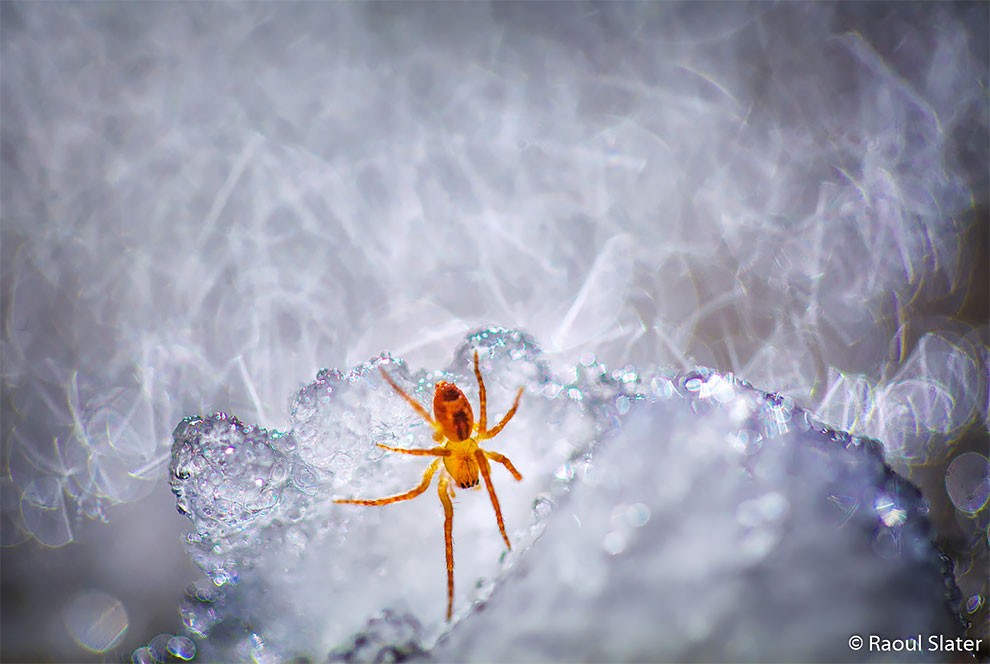 Animal habitat: runner-up. Spider on ice. Unidentified species.
An overnight blizzard had knocked a myrtle tree down onto the path of the Enchanted Walk next to Cradle Mountain Lodge. I was out in the brilliant sunshine the next morning looking for subjects for my macro lens and came across this tiny spider crossing a patch of snow. Photo Credit: Raoul Slater, Queensland 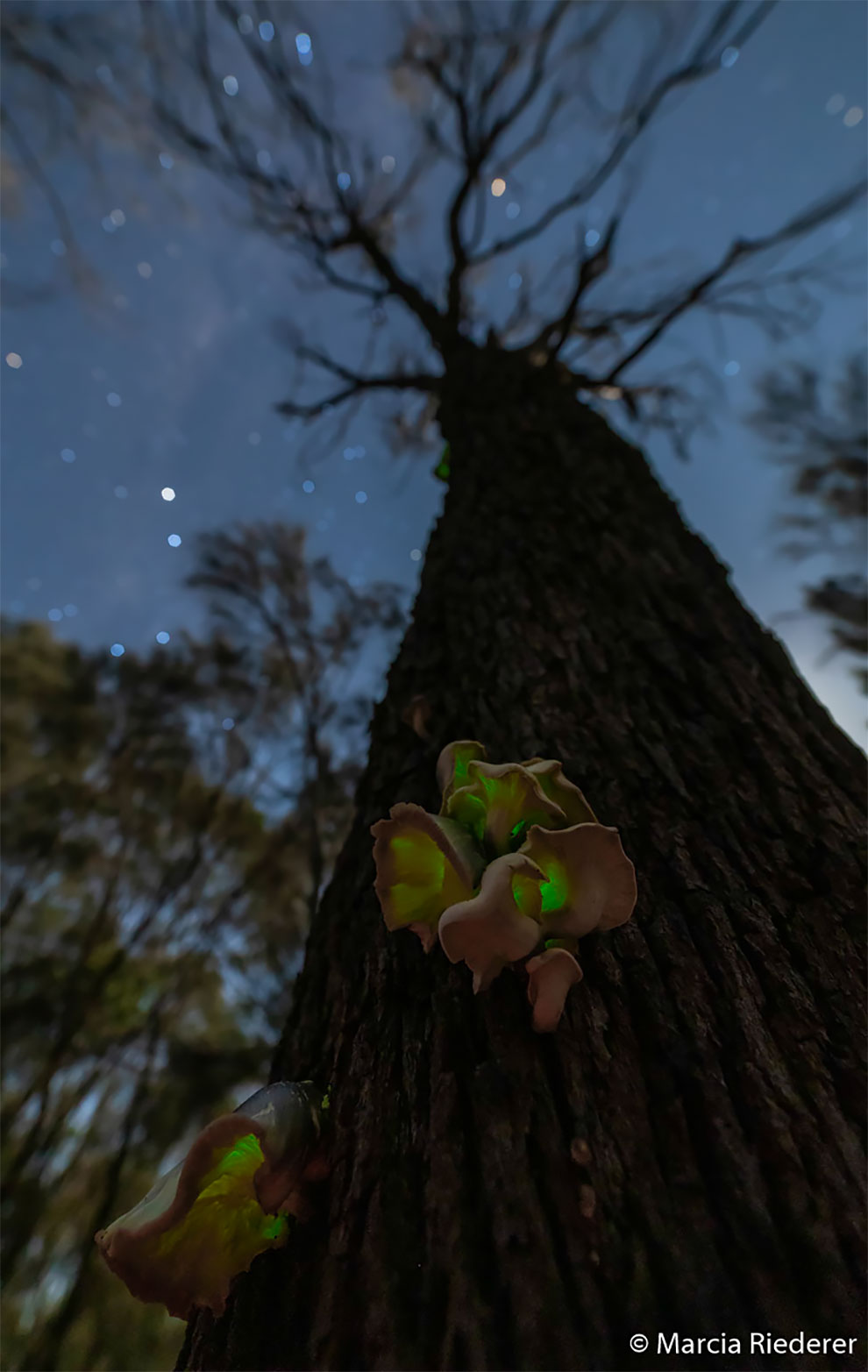 Botanical: winner. The ghost of the forest. Ghost fungus.
The elusive ghost mushroom show starts after dark, when the green light of its bioluminescence glows across the pine forest on the Bellarine Peninsula. It seems like magic but the glowing works to attract insects that then help disperse the spores and spread the mushroom. Photo Credit: Marcia Riederer, Victoria 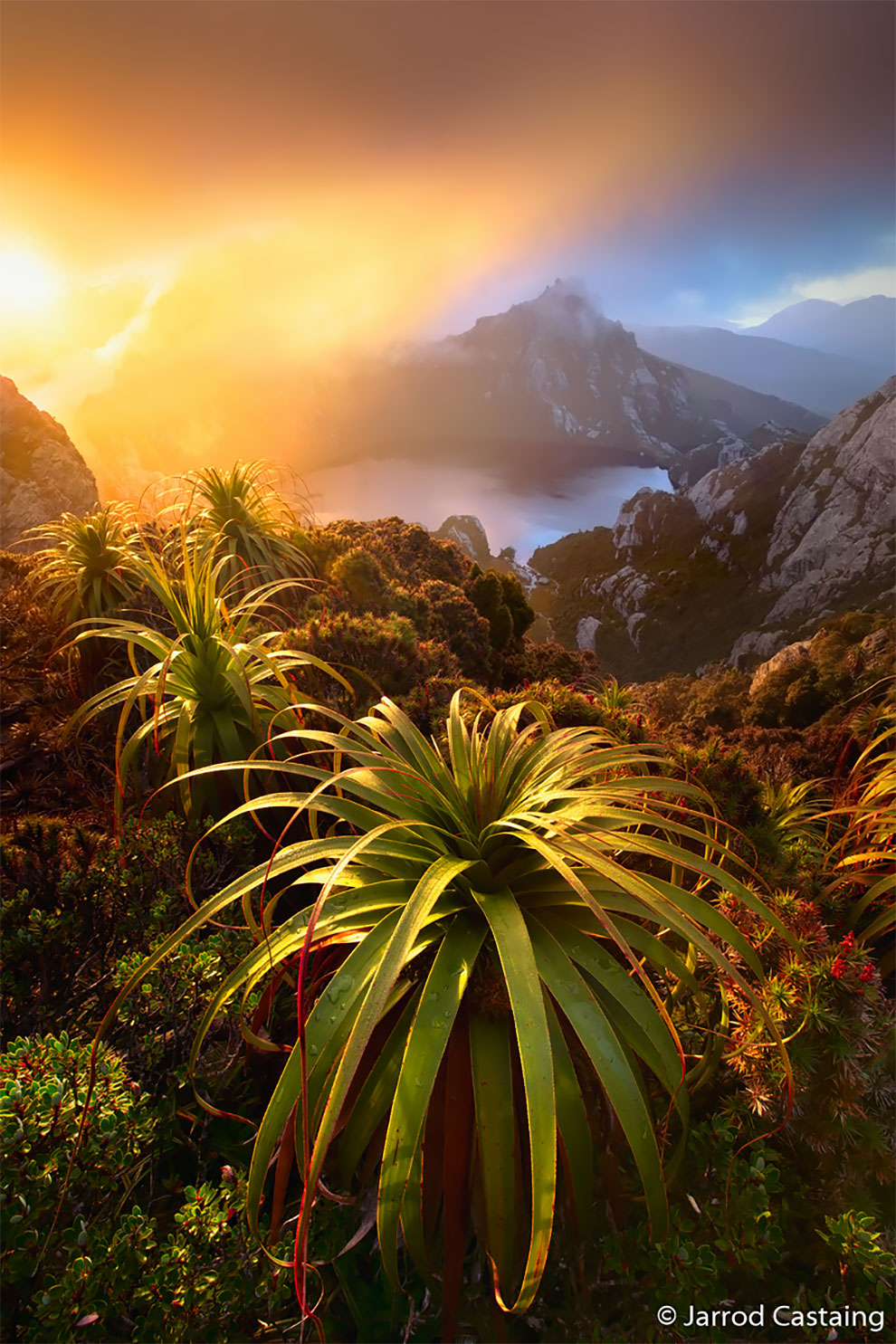 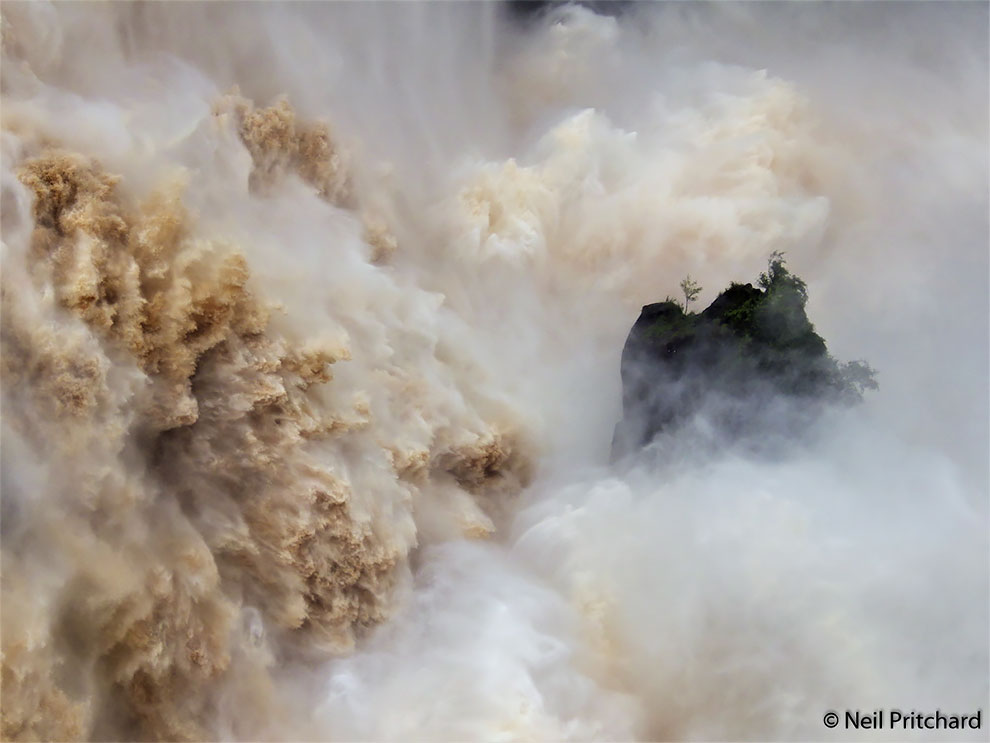 Landscape: winner. Barron Falls.
When Barron Falls (Din Din) is in flood, the usually tranquil scene is transformed into a tumultuous cataract as huge volumes of water make their way to the coastal plain below. The sheer violence of this display, coupled with the deafening roar, makes it an unforgettable experience. Photo Credit: Neil Pritchard, Queensland 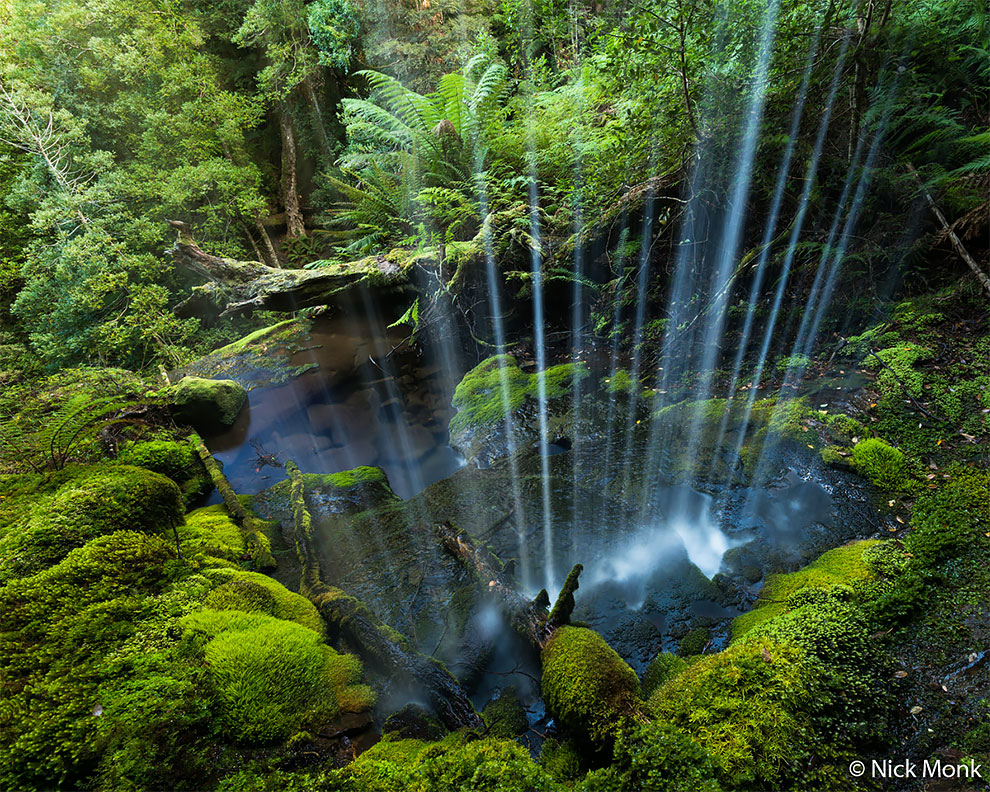 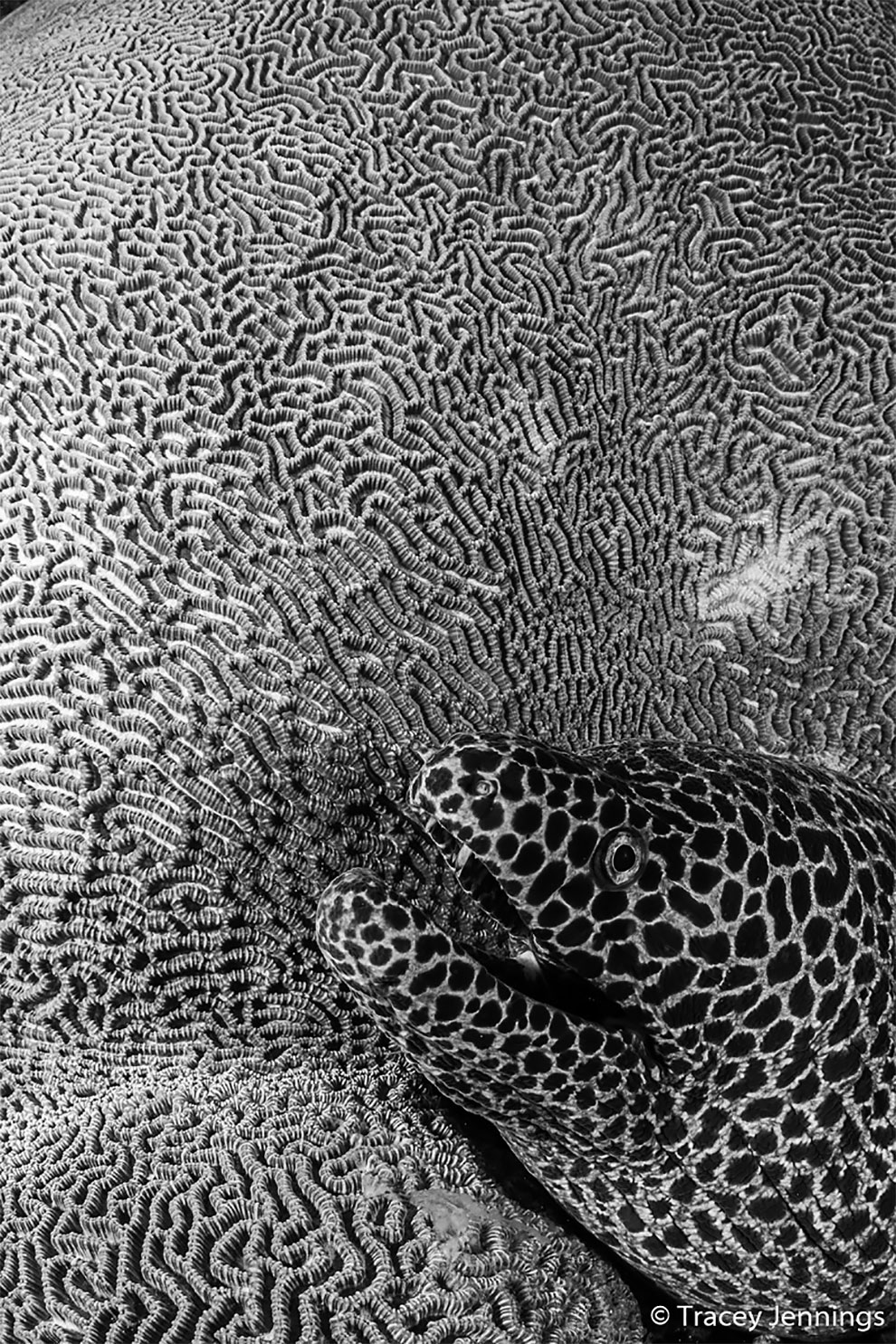 Monochrome: winner. Texture. Honeycomb moray eel.
I came across this amazing juxtaposition of a honeycomb moray eel and a textured brain coral. It screamed monochrome to me, but one of the significant disadvantages of shooting under water is that you cannot just change your lens to suit the subject. Still, I slowly moved as close to the eel as possible, increased the depth of field, and adjusted my strobes to light up the coral and the eel. Photo Credit: Tracey Jennings, United Kingdom/Malaysia 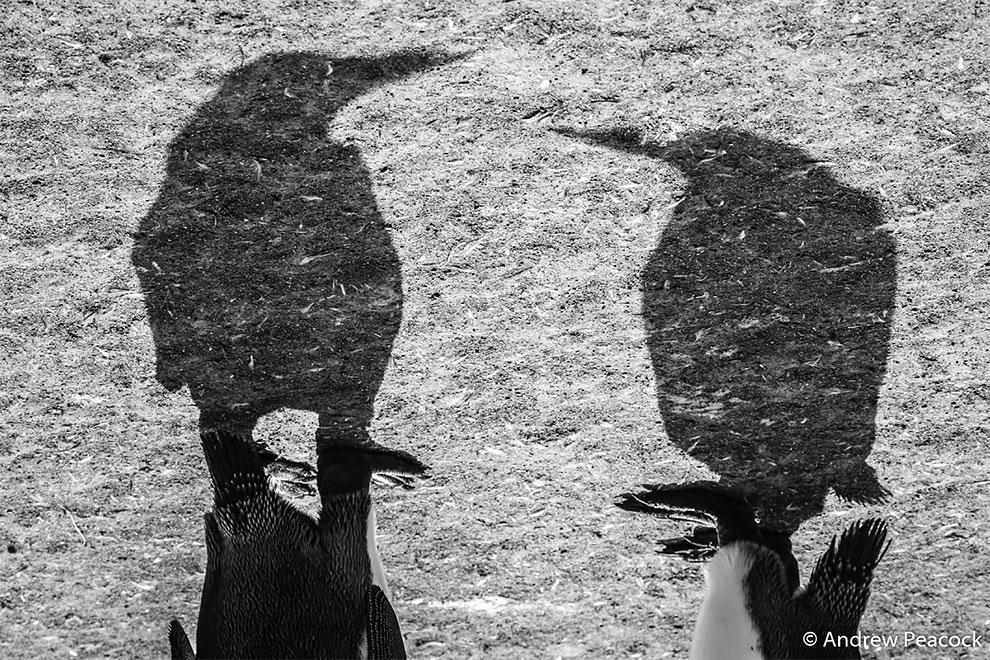 Monochrome: runner-up. King pair conversation. King penguin.
An enormous king penguin colony is overwhelming to all of one’s senses. Photographically, it pays to sit and watch for a while to find moments of penguin interaction. Flipping the frame upside down and black-and-white processing allows for a different and creative interpretation of a common scene. Photo Credit: Andrew Peacock, Queensland 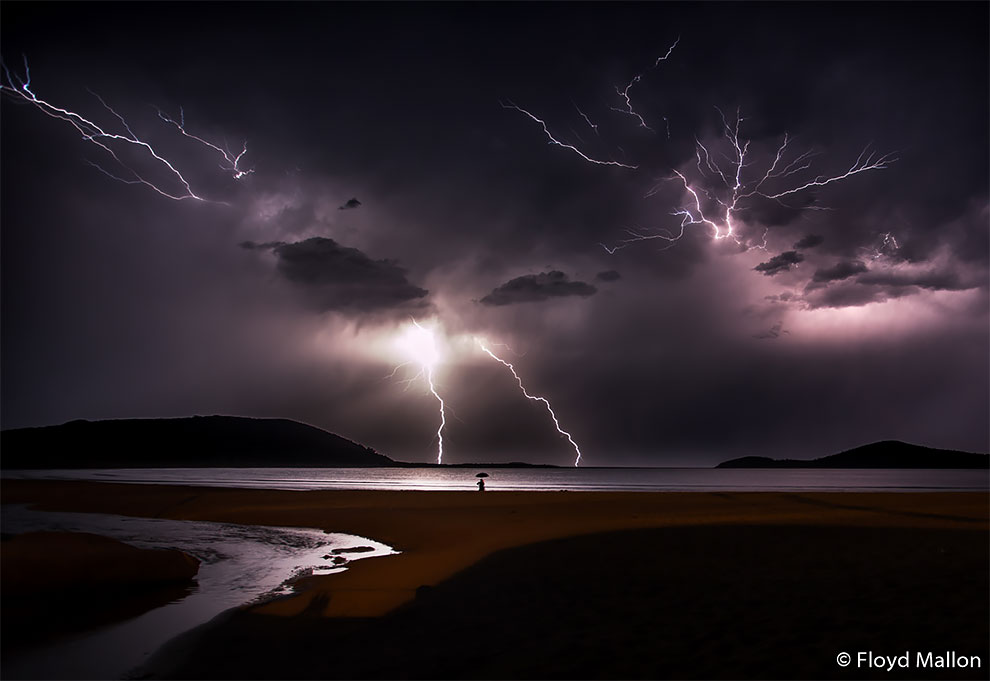 Junior: winner. In the dark.
This night was the most amazing display of lightning that I have ever seen, with constant flashes of lightning lasting hours. For the composition, I decided to focus on a man standing at the edge of the water with an umbrella to add a sense of scale to the image. Photo Credit: Floyd Mallon, New South Wales. Age 17 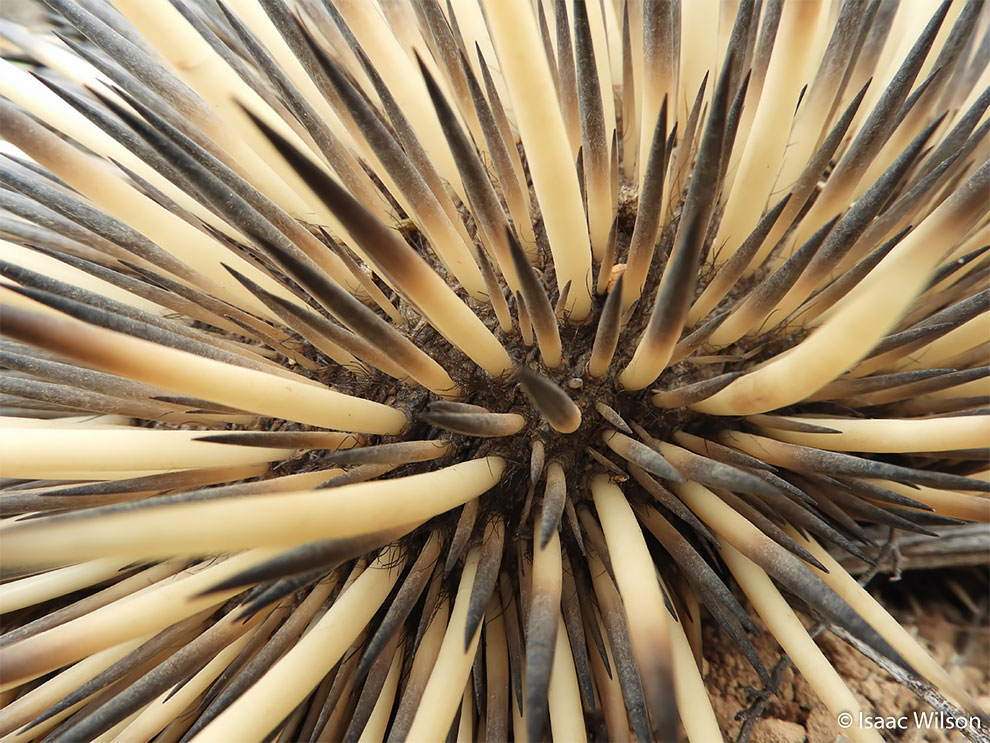 Junior: runner-up. Under the spikes. Short-beaked echidna.
On the way back from the Murray River we saw this echidna crossing the road. It hid its face and I knew it wasn’t coming out, so I decided to take a close-up. That was the best shot I took. Photo Credit: Isaac Wilson, South Australia. Age 10 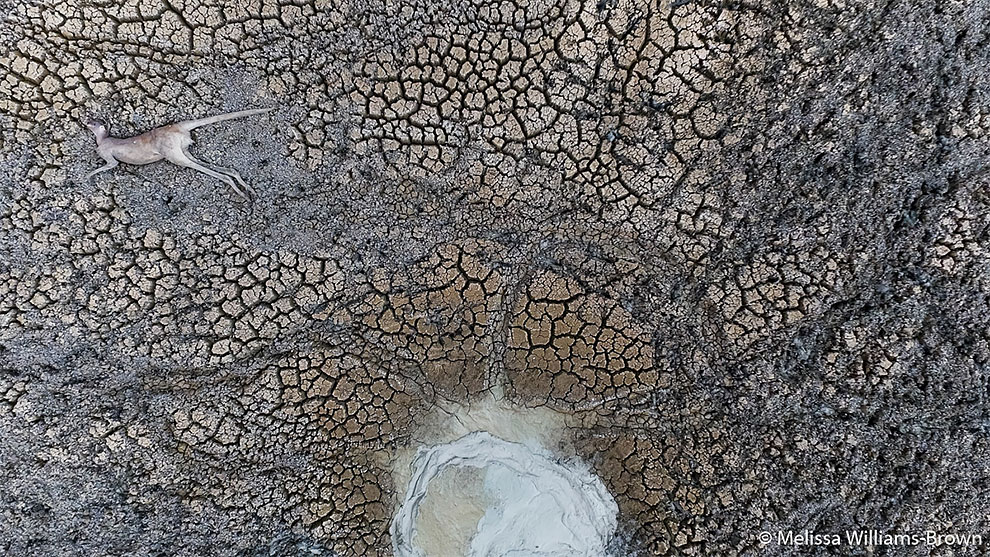 Our impact: winner. The watering hole.
The Menindee Lakes were deliberately drained in 2016–17 and New South Wales has experienced a lengthy drought. Animals and birds desperately seek food and water and there is very little left due to these human-made and natural events. Lake Cawndilla is now just a drying lakebed scattered with the remains of our native animals. Photo Credit: Melissa Williams-Brown, South Australia 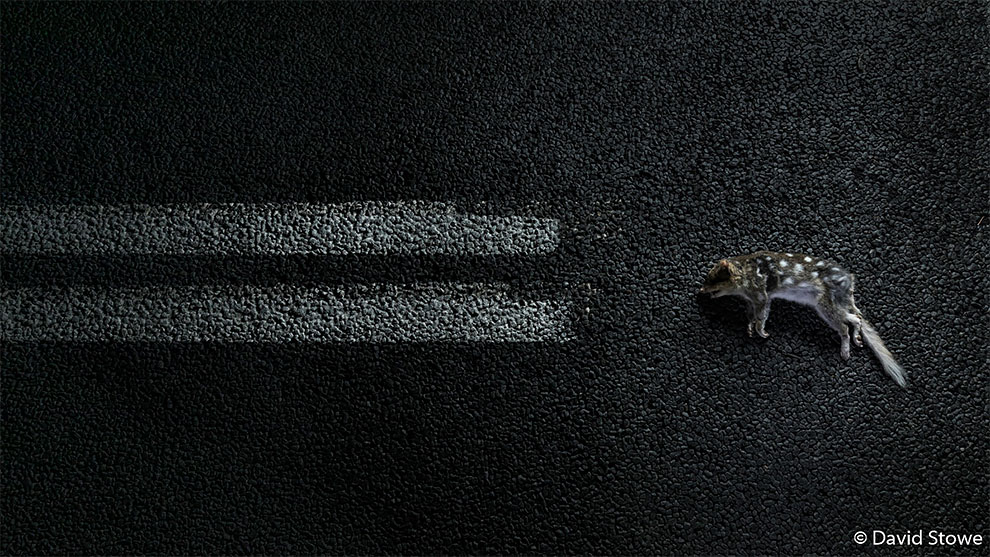 Our impact: runner-up. End of the line. Eastern quoll.

Country roads + speed × darkness = the end of the line. And not only for this poor eastern quoll, but for so many other native mammals across our country. In places like Bruny Island, more needs to be done to limit drivers’ speed at night. Too many animals lose their lives every night, not only to speed, but carelessness, and, even more sadly, wanton cruelty. Photo Credit: David Stowe, New South Wales 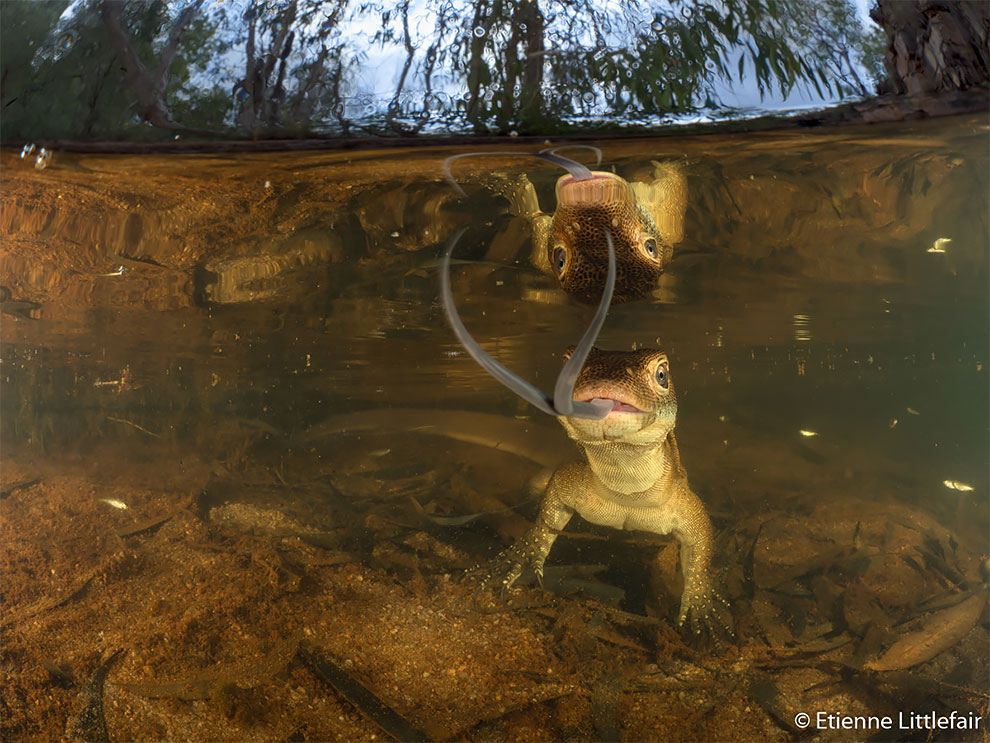 Threatened species: winner. Curious encounter. Merten’s water monitor.
Mertens’ water monitors are highly inquisitive. This extremely bold specimen ostentatiously approached me to investigate the good-looking lizard in my dome port while I observed another nearby pair engaged in courtship – sadly for him he was staring at his own reflection, not the mate of his dreams. Photo Credit: Etienne Littlefair, Northern Territory 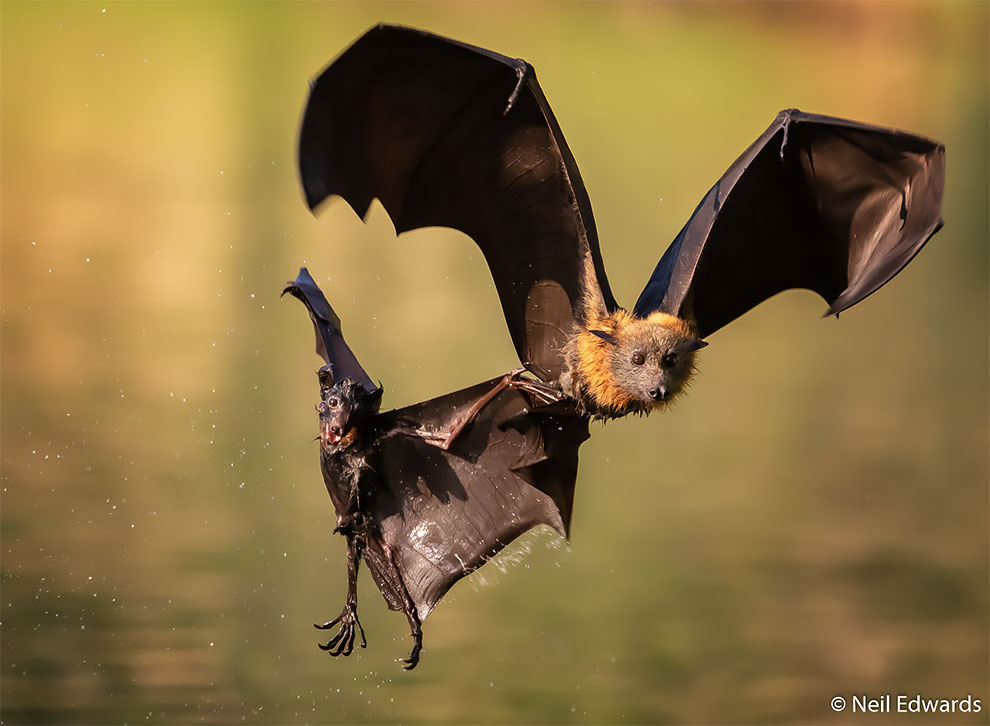 Threatened species: runner-up. Just hanging on. Grey-headed flying fox.
On extremely hot evenings grey-headed flyingfoxes will dip their bellies into the river so they can lick their wet fur for a drink. This female still carrying her young misjudged her approach and nearly dropped the baby on impact with the river, but somehow it just managed to hang on. Photo Credit: Neil Edwards, South Australia

This Harry Potter Themed Wedding Is Most Magical Thing Ever
"A Hundred Summers, A Hundred Winters": Dutch Photographer Bertien Van Manen Travels The Far East To Capture 'Dark Times' Of Post-Soviet Russia
Amazing Vintage Photographs of Linemen on Utility Poles at the Turn of 20th Century
20 Weirdest Images on Google Street View
Here’s What Marijuana Looks Like Under The Microscope
Model's Underwater Shoot With Whales
Lithuanian Photographer Took A Pictures Of The Most Colorful Old Garage Doors In Her Country
2019 Irish Farmer Calendar Is Here!
The Nissan Production Line
Spectacular Winners Of The Hasselblad Masters Award 2018
Photo Masterpieces Of The Red Bull Illume Photo Awards 2016
Photo of Holden Crater on Mars
Living With Lion Cubs
"Backstage Disillusion": The Incredible In-Game Photo Artworks By Petri Levälahti
Journey in the Search for the American Dream
2012 Victoria’s Secret Fashion Show
The Veolia Environnement Wildlife Photographer of the Year Competition
Rare Color Photos From The Depression Era
Spectacular Winning Photos Of Nikon Small World 2021
Photographs Of 'El Segundo Barrio' Of El Paso In 1972 By Danny Lyon
Dream World: Revisiting the Surreal Urban Landscapes of Japan by Anthony Presley
Girls In Bikini On The Beach Of California, 1970
Pollution 2011: Where Children Played This Year
Fantastic Photos Show What An Abandoned Soviet Submarine Looks Like From Inside
The Breathtaking Geometry Of America From Above
Fashion Photographer Imagines Cars As Supermodels
Honest Photos That Show What Veterans Look Like After A Decade Of War In The Middle East
Marvelous Female Portrait Photography By Katarzyna Markiewicz
Vintage Snaps Capture Life at Venice Beach in 1970
"I Feel Safe when Everybody Is at Home": Performance Artist Sleeps in Street of Istanbul
2019, australia, contest, nature, photographer, winners