Signs of Spring Around the World 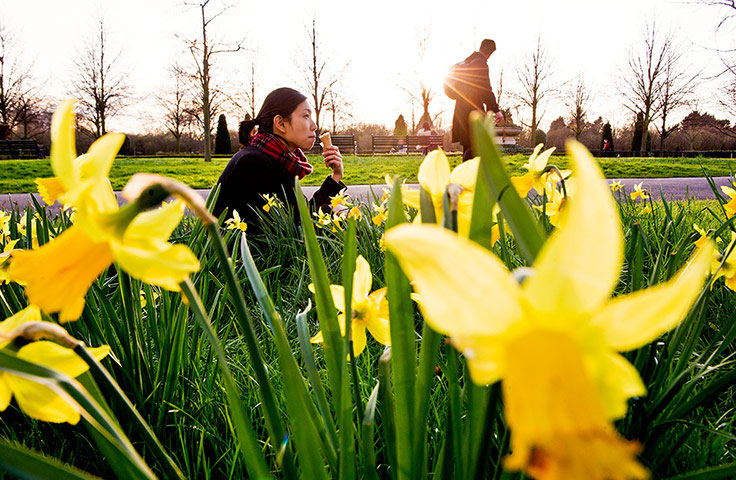 London, UK: a woman enjoys an early taste of summer with an after-work ice cream in Regent’s Park on the last official day of winter. (Sarah Lee/Guardian) 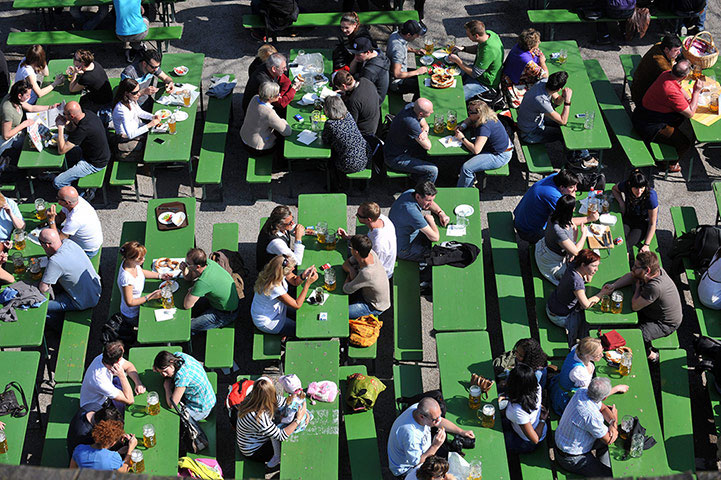 Munich, Germany: people enjoy the sunshine in the beer garden near the Chinese pagoda at the English Garden. Spring-like temperatures lured many people into the open at the weekend. (Andreas Gebert/EPA) 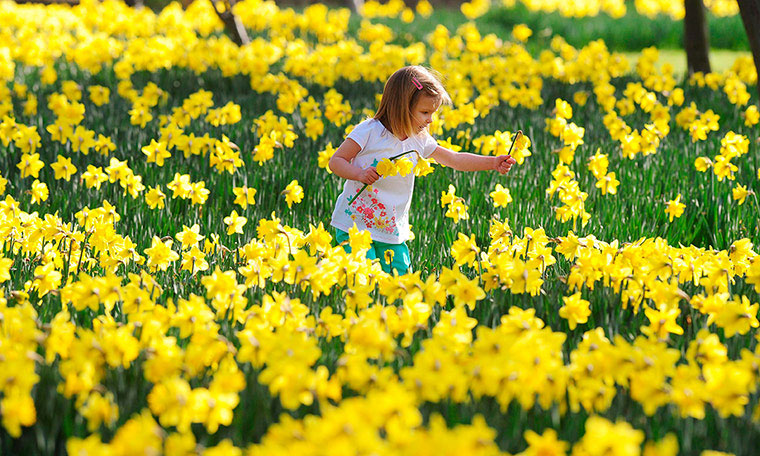 Whitley Bay, UK: three-year-old Kadie Leigh Koch among the daffodils as the spring weather continues across the UK. (Owen Humphreys/PA) 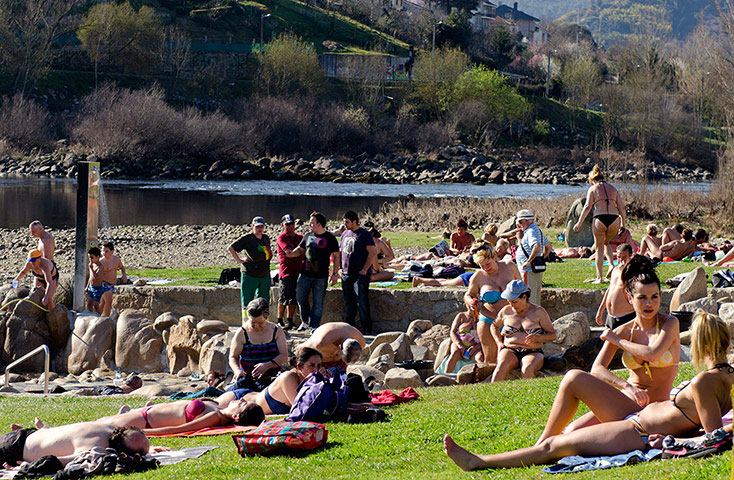 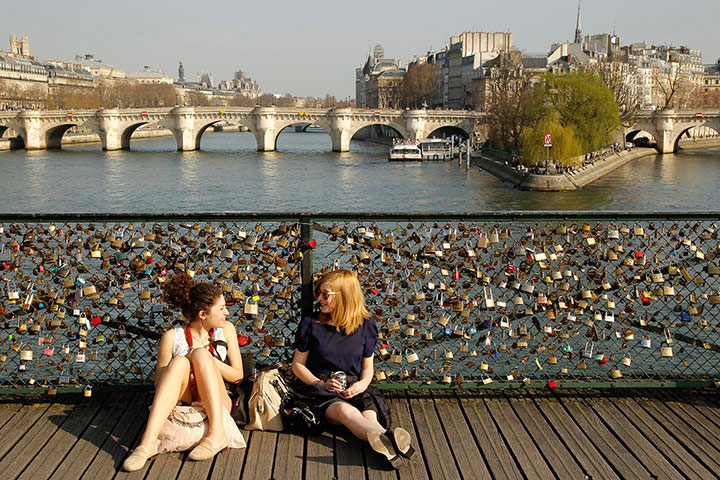 Paris, France: young women sit in the sun on the Pont des Arts with its fence covered with padlocks left by lovers over the River Seine as unusually warm temperatures hit the French capital. (Benoit Tessier/Reuters) 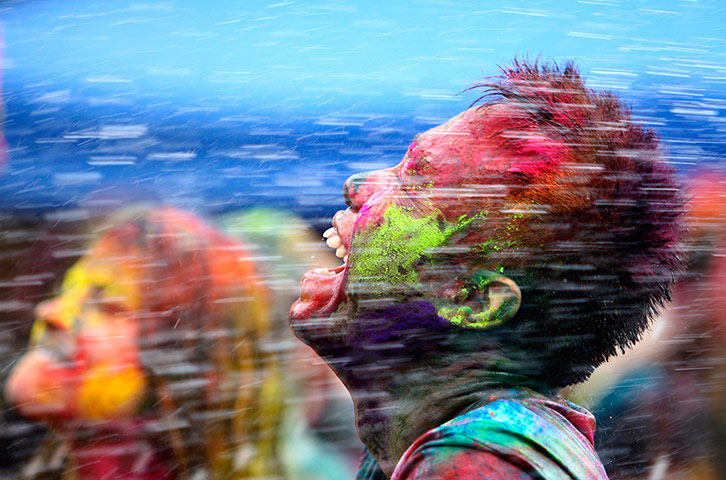 Kuala Lumpur, Malaysia: devotees with faces covered in coloured powder seen being splashed with water during the Holi celebrations. Holi, also known as the festival of colours, is to mark the end of the winter season and the arrival of spring. (Mohd Fazrul Hasnor/Demotix/Corbis) 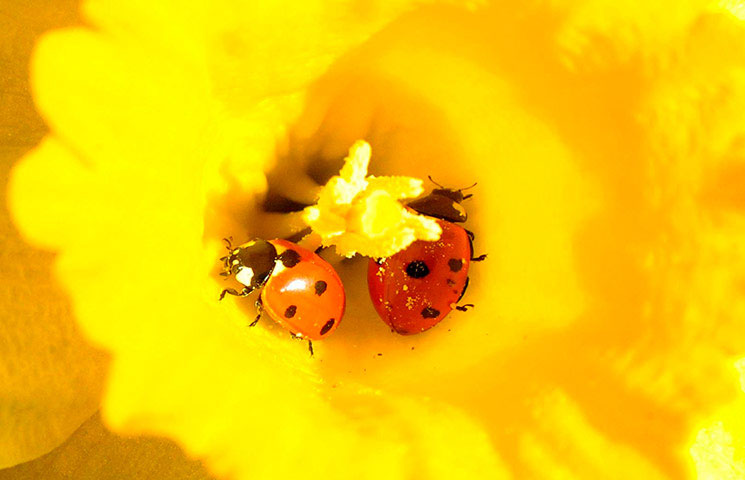 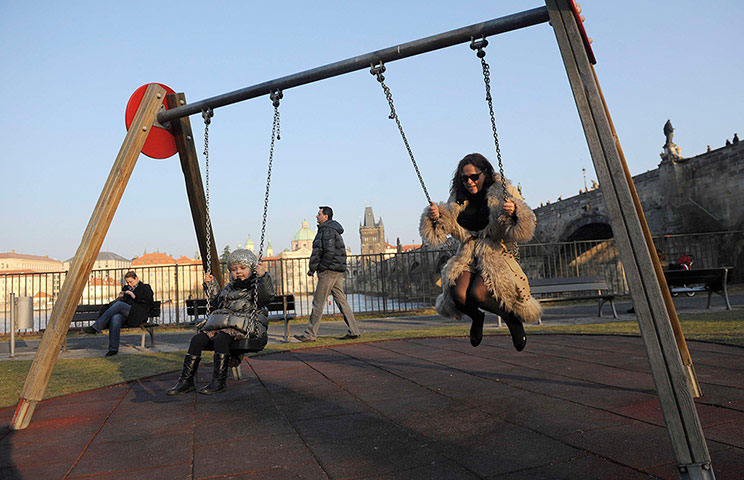 Prague, Czech Republic: a mother with her child enjoy the swings during a sunny day in front of Charles Bridge in Prague. Parts of Europe are now experiencing spring-like temperatures. (Michal Cizek/AFP/Getty Images) 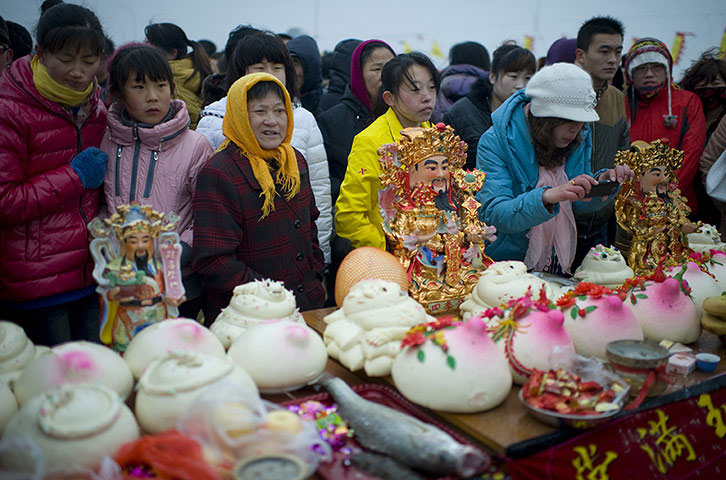 Jimo, China: Chinese villagers watch the offerings during the ceremony of sacrifice to the sea god. The village ceremony has a 500-year-old tradition where fishermen decorate their boats, slaughter pigs, prepare offerings and burn papers in the hope of good fortune in the fishing season. (Hong Wu/Getty Images) 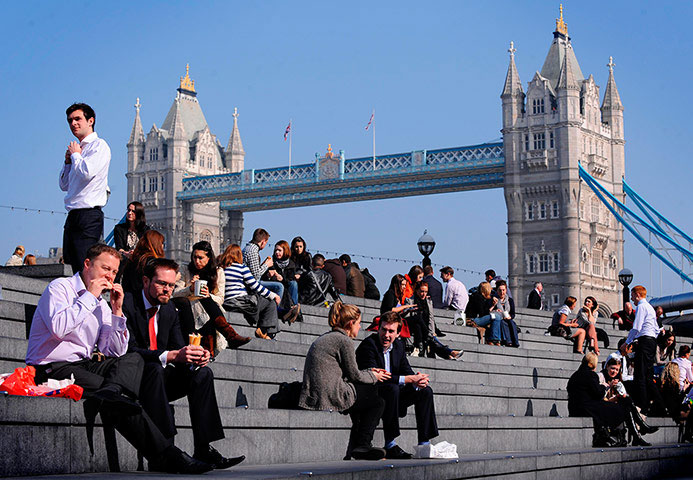 London, UK: office workers near Tower Bridge take their lunch in the sunshine as the spring weather continues across the UK. (Dominic Lipinski/PA) 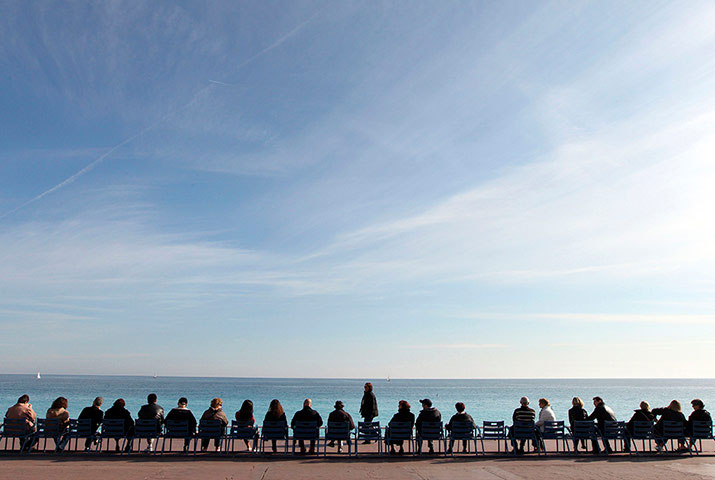 Nice, France: people sit along the beach in front of the Mediterranean sea while enjoying a sunbathe on the Promenade des Anglais in the French Riviera. (Valery Hache/AFP/Getty Images) 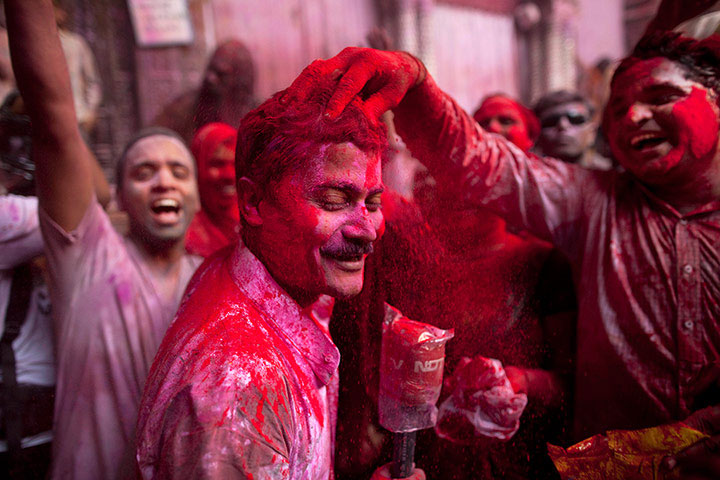 Delhi, India: Hindu devotees put red powder on the head of a local television news reporter while celebrating Holi, the festival of colour that marks the start of spring. (Kevin Frayer/AP) 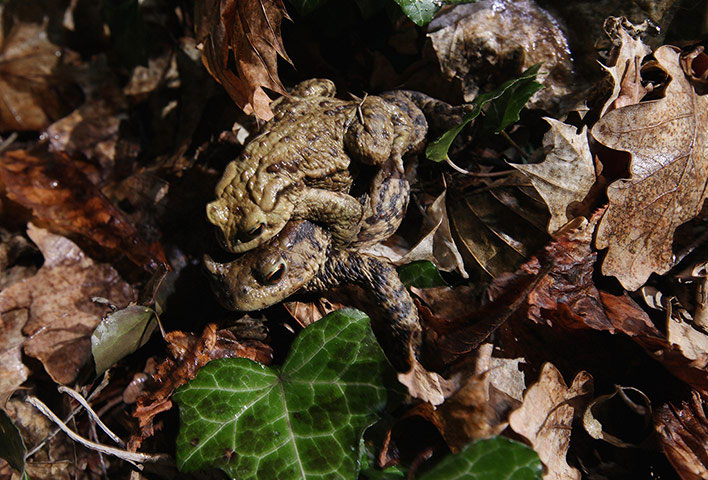 Gueterfelde, Germany: A male toad clings to the back of his female partner after volunteers deposited them on the other side of a road along the toads’ migration route. Volunteers from Germany’s NABU wildlife protection group collect toads migrating to spawn in a nearby lake in order to save them from the passing cars on a road that lies along the migration route. (Sean Gallup/Getty Images) 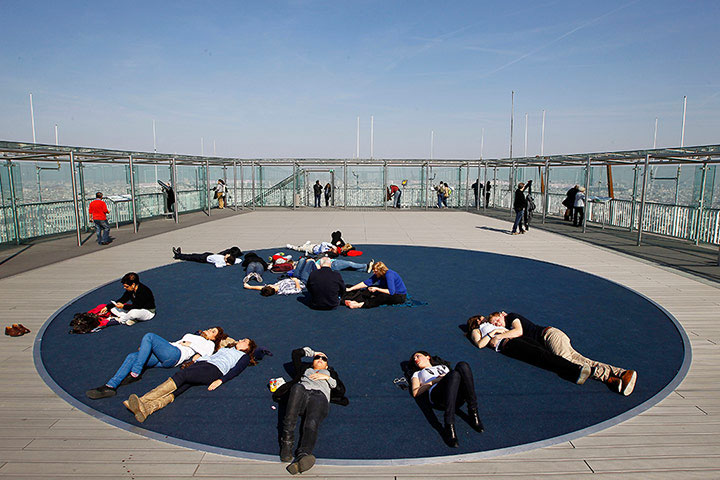 Paris, France: tourists and Parisians take advantage of warm temperatures in the French capital by relaxing on top of the Montparnasse Tower. (Francois Mori/AP) 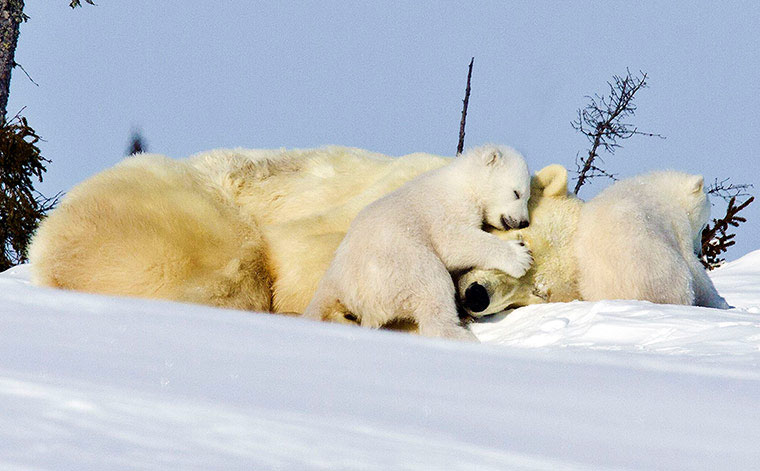 Churchill, Canada: a polar bear and her cubs shortly after emerging from their winter den for the first time. The mother may not have eaten for eight months. The cubs will stay with her for approximately two and a half years. (Christine Haines/Rex Features) 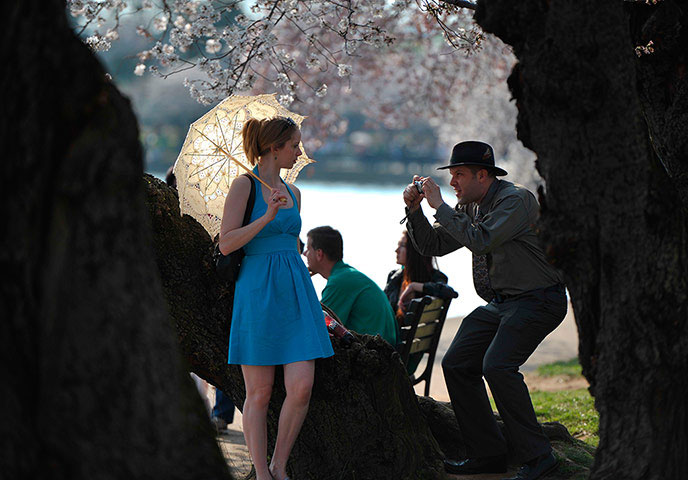 Washington DC, US: a couple take photos beneath cherry blossom trees adjacent to the tidal basin on the National Mall. The iconic trees are beginning to bloom, with the National Park Service forecasting peak bloom between 20 and 23 March, one of the earliest years on record due to warmer-than-average temperatures. (Mladen Antonov/AFP/Getty Images) 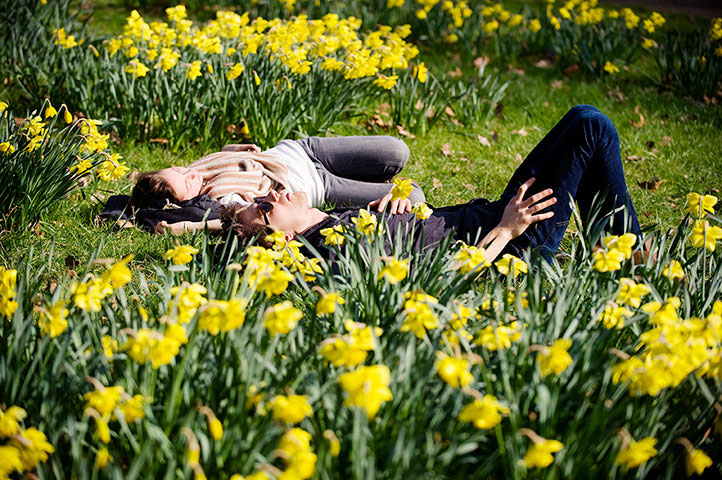 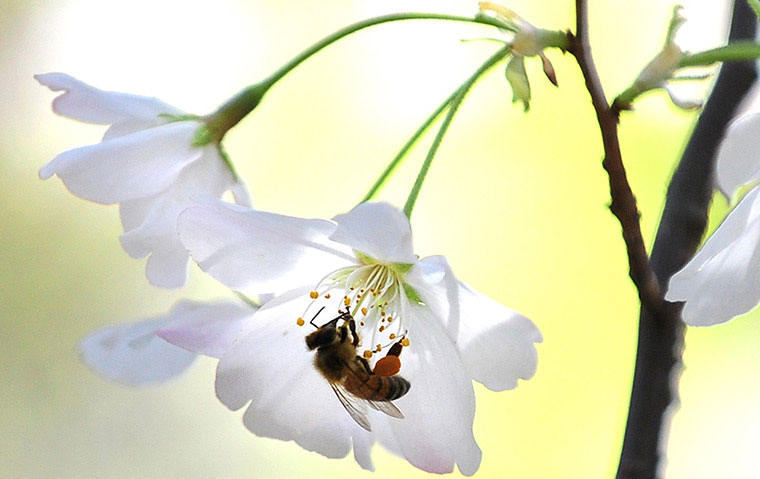 Los Angeles, US: A bee feeds on the pollen of a cherry blossom tree. (Frederic J Brown/AFP/Getty Images)

Dressed to Impress
In the Memory of Steve: Photo Tribute
Vintage Snaps Capture Life at Venice Beach in 1970
Incredible Snaps from The Winners of The Annual Sea View Photography Competition Capture the Wonders of The Ocean
Selfies From The Past: Celebrating A Birmingham Community’s Selfies From 40 Years Ago
Going Down The London Underground In The Later 1980s
Rare Purple Crab Species Identified in Threatened Palawan Biodiversity
Thousands Of Twins Descend Upon Ohio For The 40th Annual Twins Days Festival
Scottish Photographer Alan McFadyen Digs Pool In Forest For ‘Mirrored’ Wildlife Photos
Scenic London: A Pre-Olympics Look
This Photographer Transformed Kids Into 'Justice League' Characters, & It's The Best Thing You Will See Today
Breathtaking Photos Of Australian Drought From Above
Photographer Paolo Raeli Shows Us How Beautiful The Youth Can Be
A Look Back At Playboy Bunny Girls
Winners & Finalists of The LensCulture B&W Photography Awards 2020
Genevieve Naylor's Post-World War II Fashion Photos In Stunning Colors, 1945-1959
'Shall We Dance' - Photographer Shawn Danker Captures Dancers On The Streets Around The World
Cat Fashion Show at the Algonquin Hotel
8-Year-Old “Siberian Snow White” Surprises Modeling Agencies With Unique Beauty, Gets Flooded With Offers
Fascinating Photos That Capture Everyday Of Oahu Beaches, Hawaii In The Early 1970s
Grizzly Bears Among Stunning Finalists of National Parks Photo Contest
Beautiful Early Entries Of The 2019 Sony World Photography Awards
Spectacular Landscape Of Lake Baikal Area In Siberia In Photographs By Alexey Matveev
Photo of the Day: Summer Heat in Europe
A Couple Find The Exact Locations From Movies And Films And Do Their Best To Recreate Scenes From Them
The Extending Mini-Skirts In Paris In The Mid-1960s
Mustique Island: Kate Middleton's Caribbean Retreat
Moon Kingdom: Untouched Landscapes Of Atacama Desert In Photographs By Chiara Zonca
Stunning Early Deadliest Tornado Photographs From The 19th Century
Inside the World of Men and Dolls
around, signs, spring, world