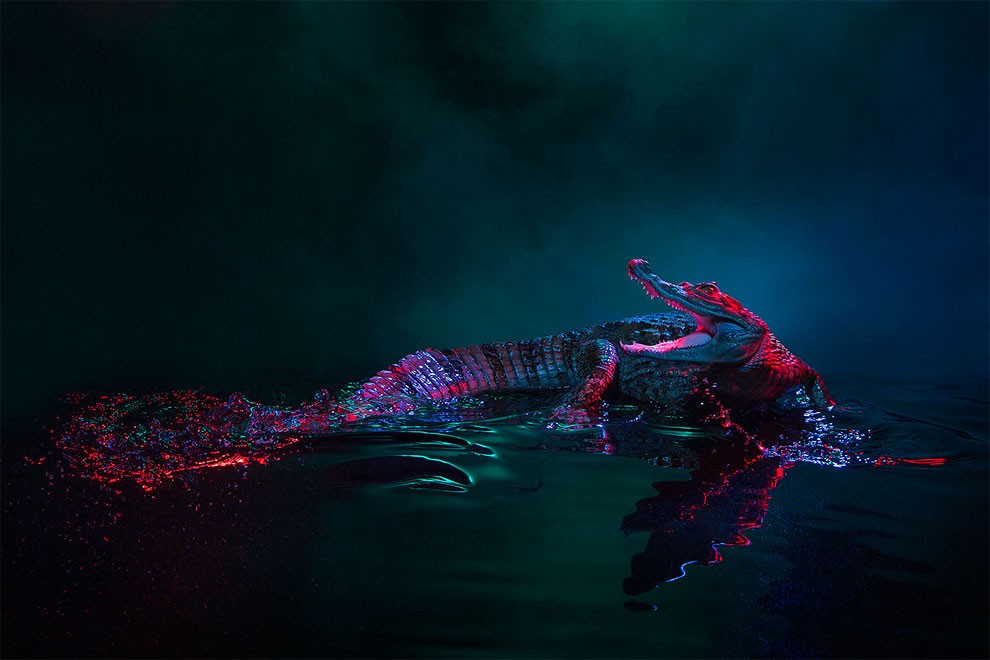 According to the majority of biologists, alligators and crocodiles are the least changed reptiles on the planet. 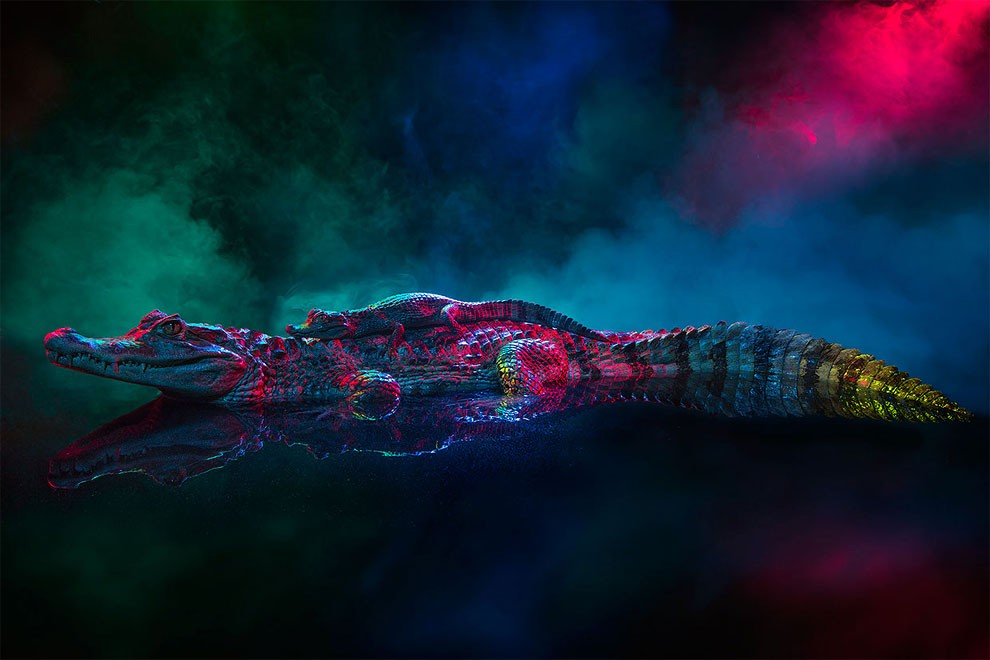 Over the course of 65 millions years, very little has changed about them and as a result they remain one of the few creatures roaming the planet that hark back to the Jurassic period. An old creature in modern times as it were. 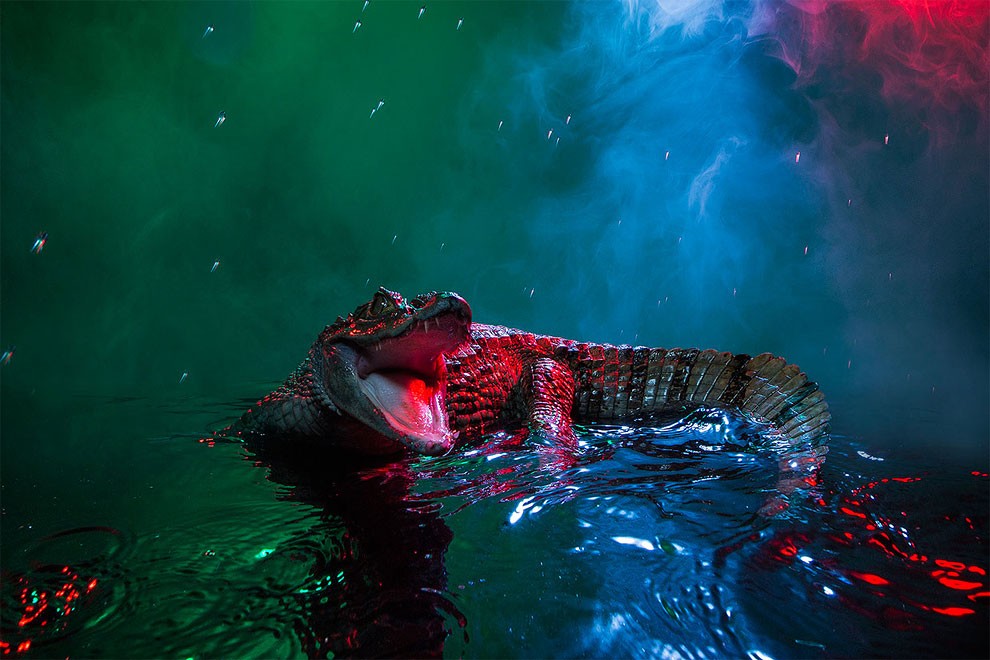 But for all the nature programmes, documentaries and books you might have seen that reference them – you won’t ever have seen the common crocodile like this before. 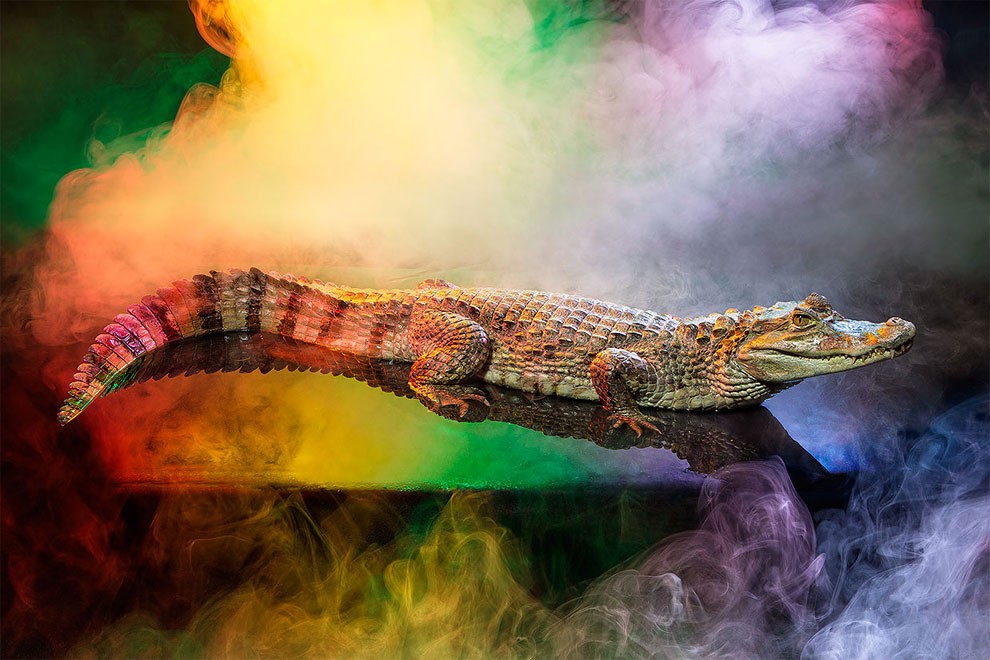 Photographer Andrew McGibbon is the man behind the lenses of the eye-popping series’ Caiman Crocodilus’ (it’s actually the Latin name for the common caiman croc) which sees these ancient creatures captured in an entirely new light. 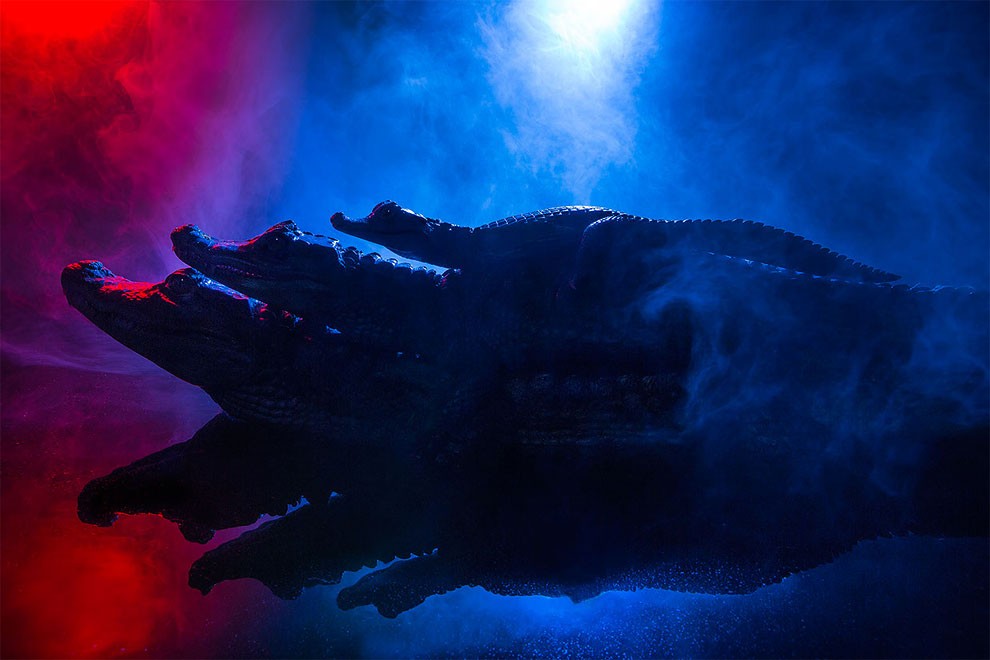 His dazzling photographs drenched in colour using various filters and lights, were all taken in front of a live audience. The reason for the audience was to capture that vibrant energy and vitality present in each animal. 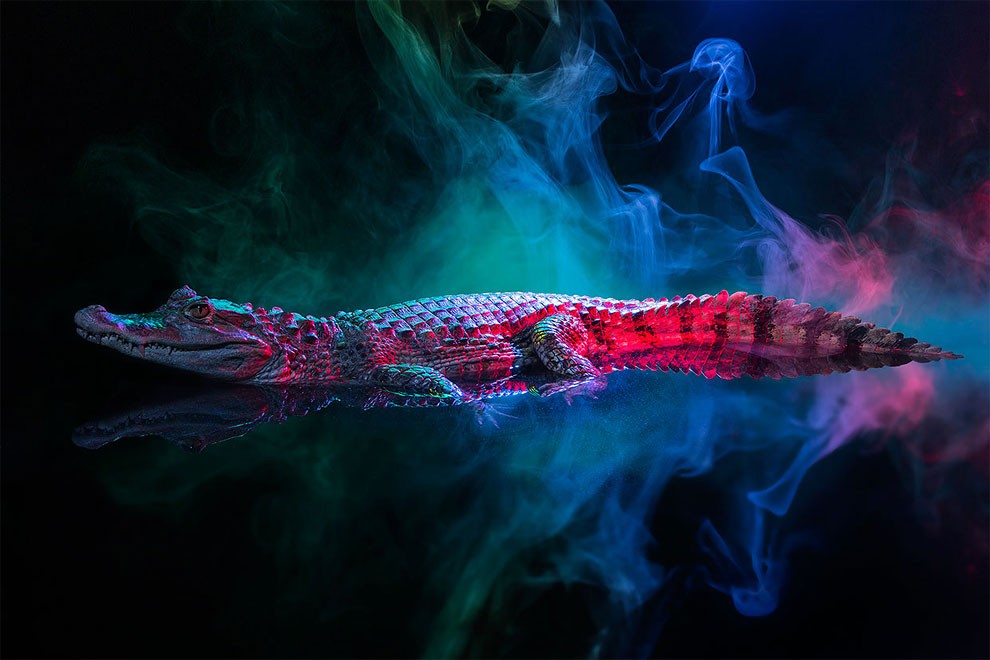 The effect couldn’t have been achieved with crocodiles simply floating around in their nature reserve – here they look alert, watchful and curious. 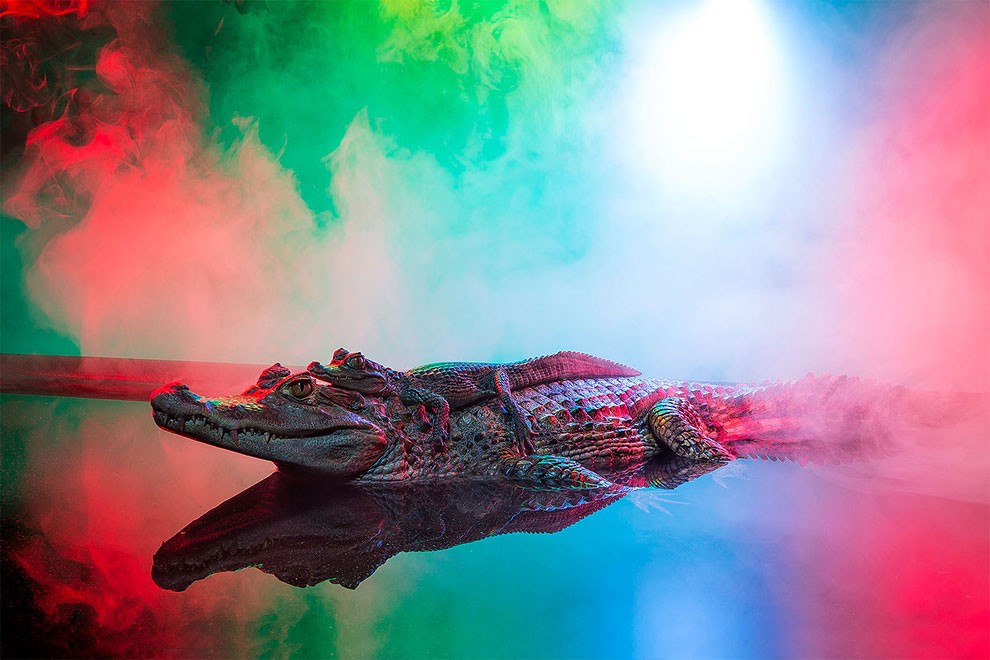 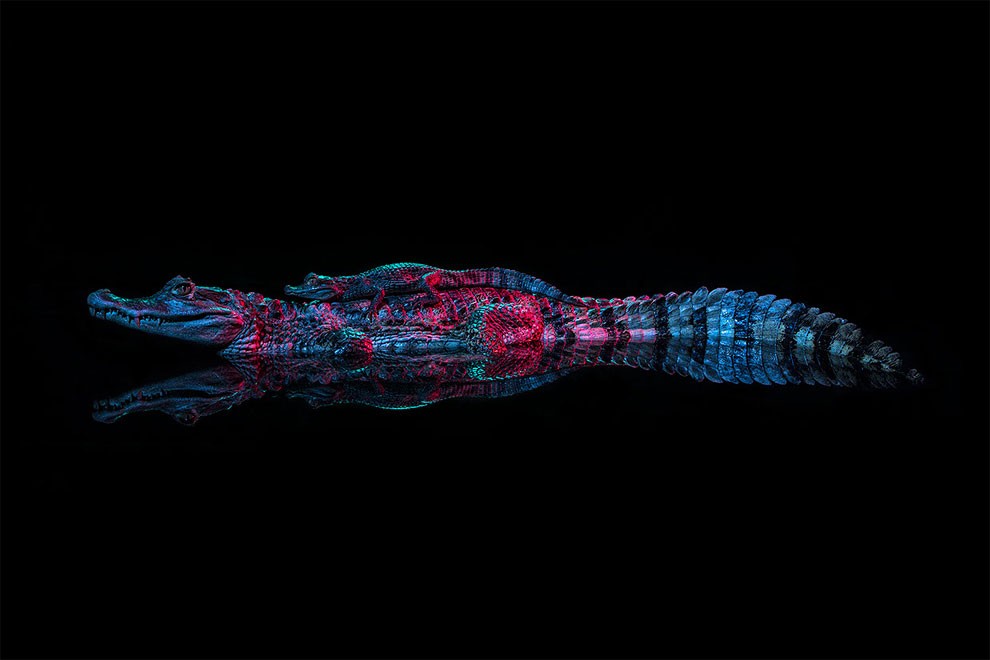 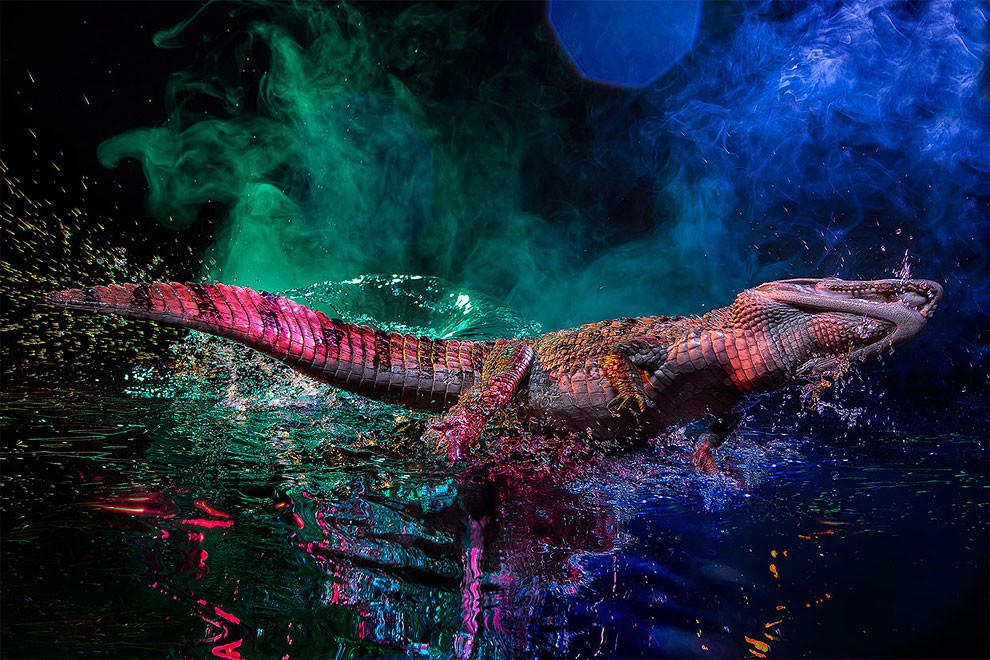 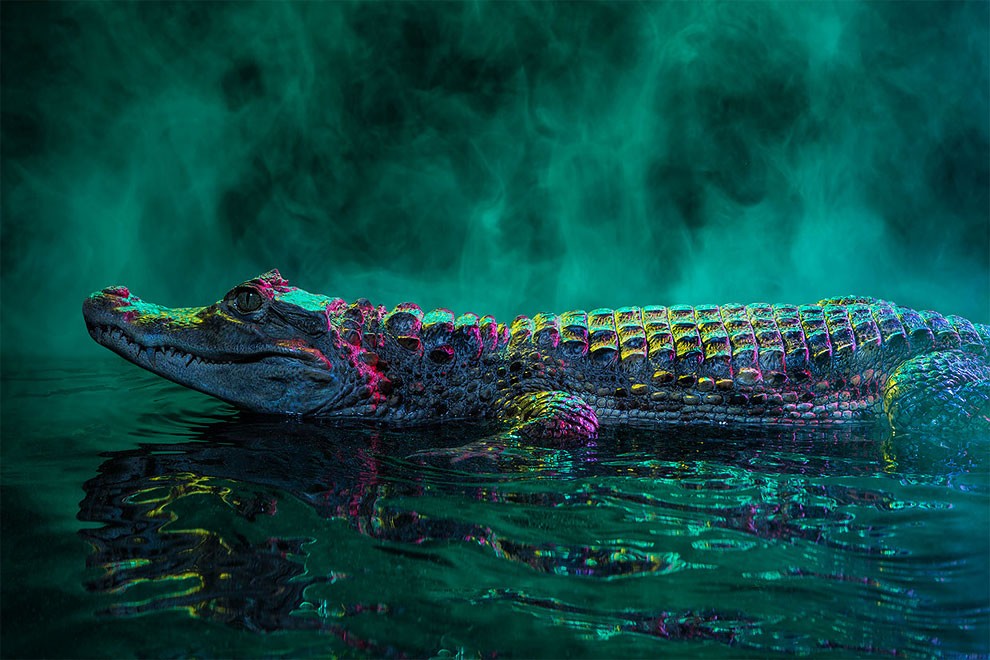 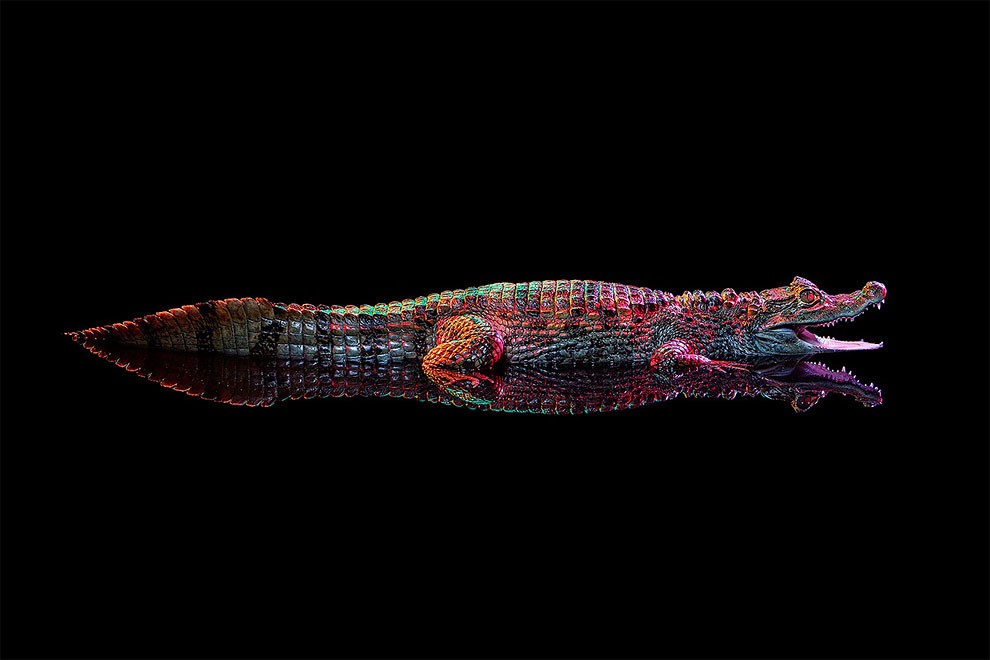 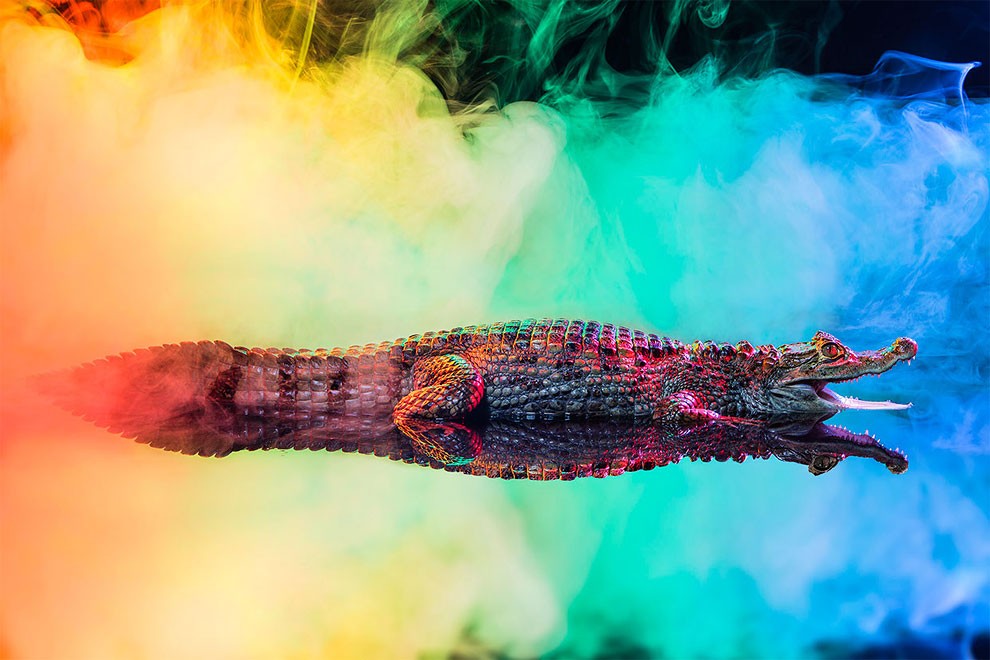 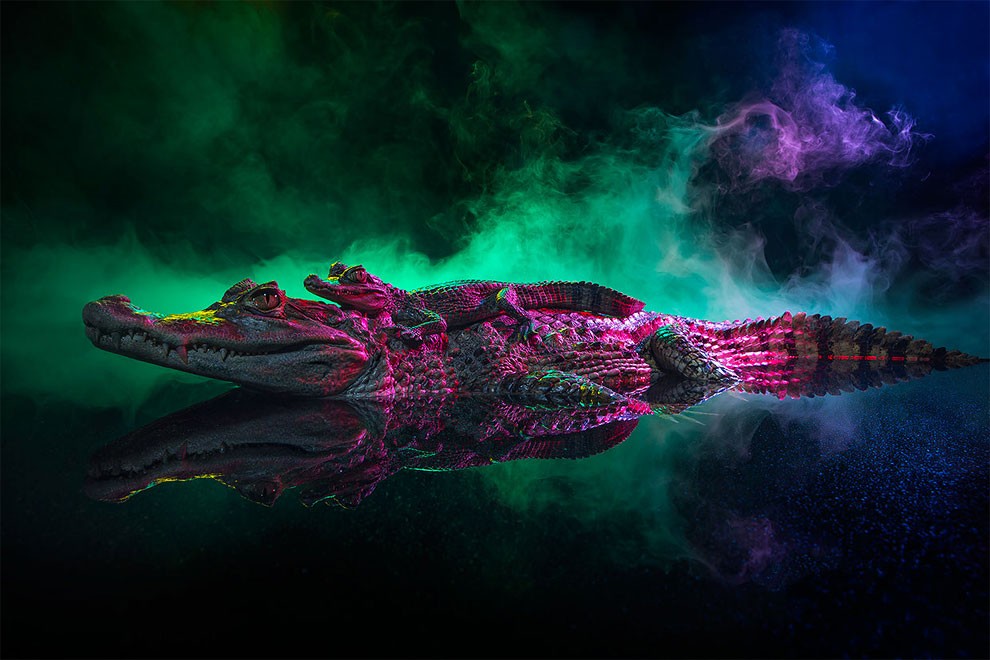 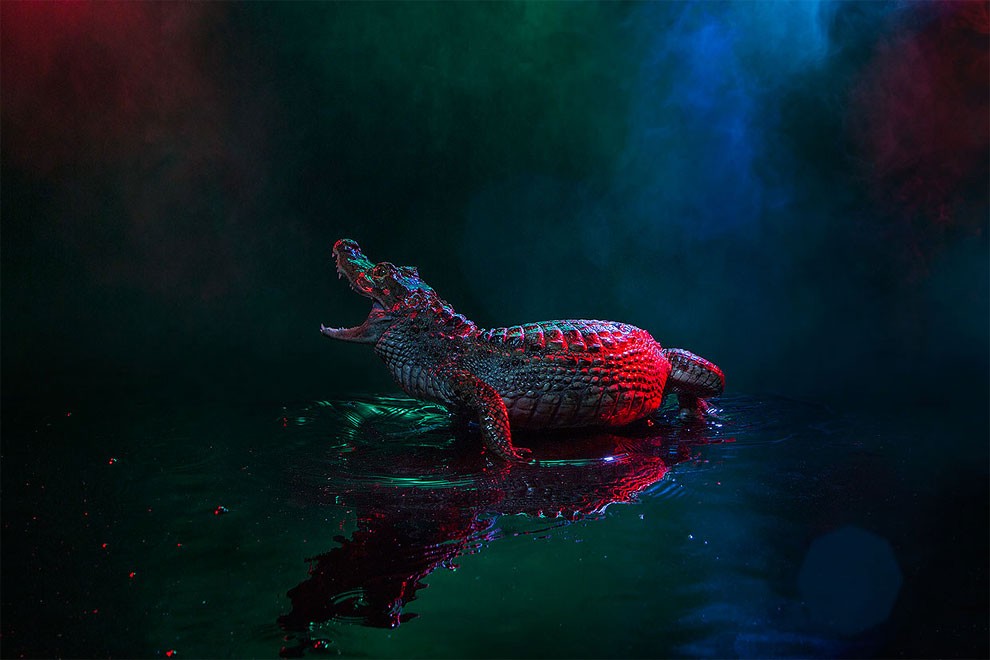 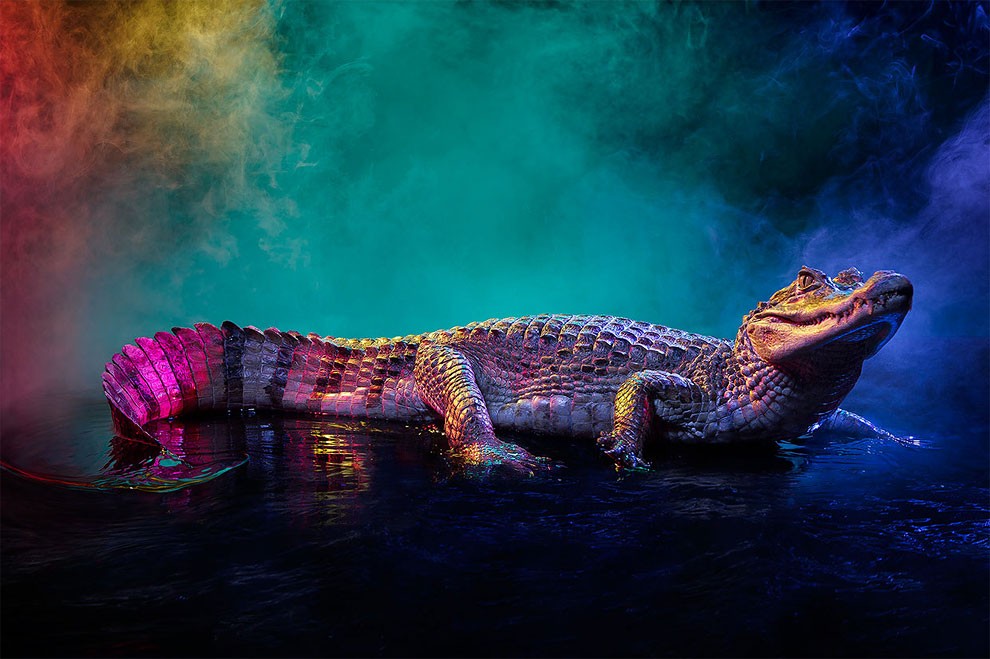 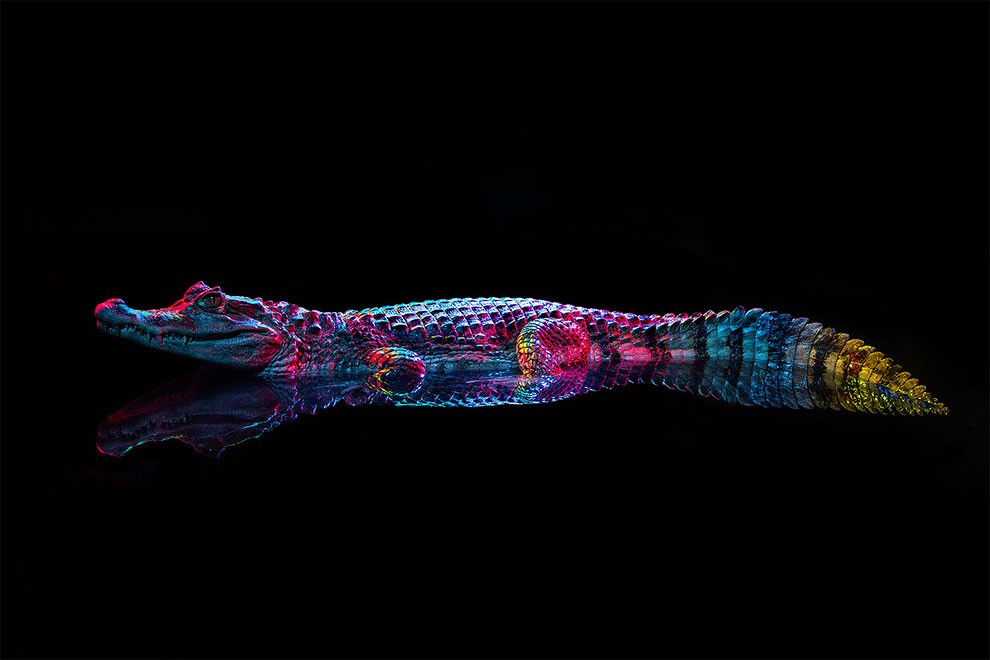 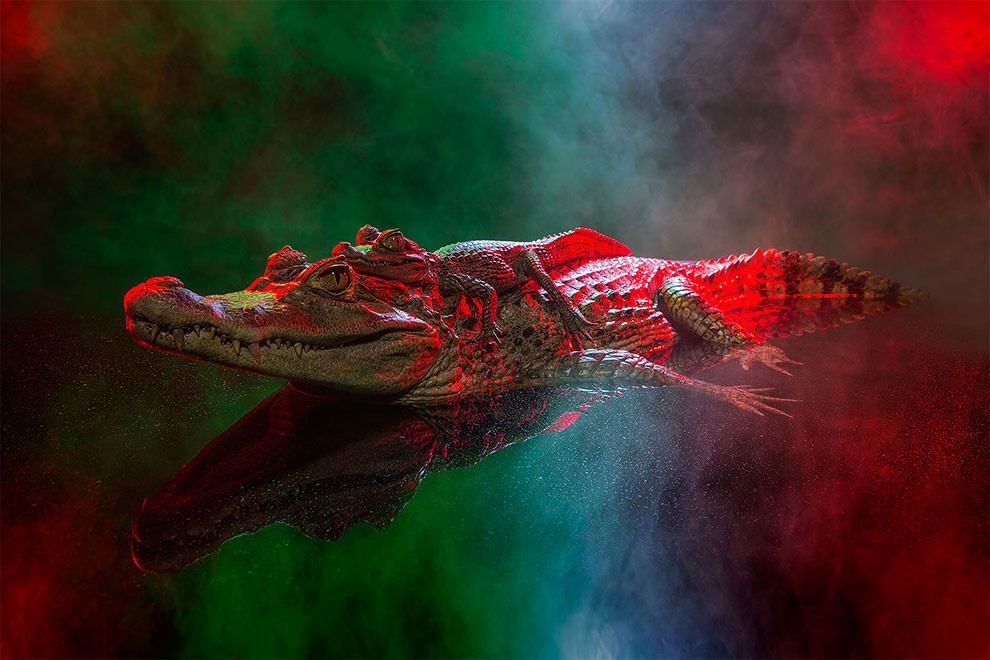 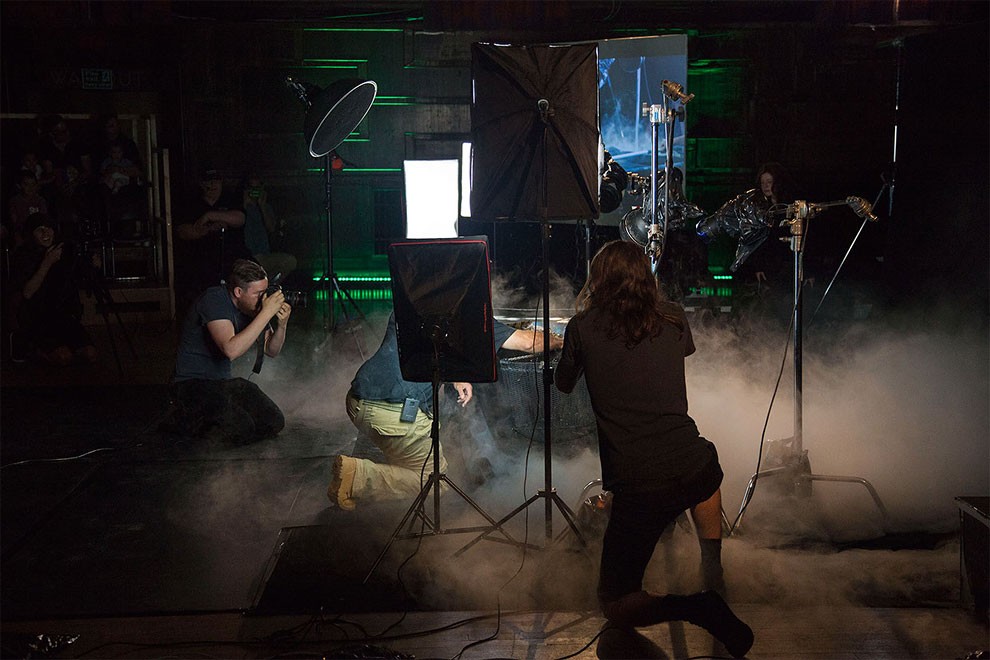 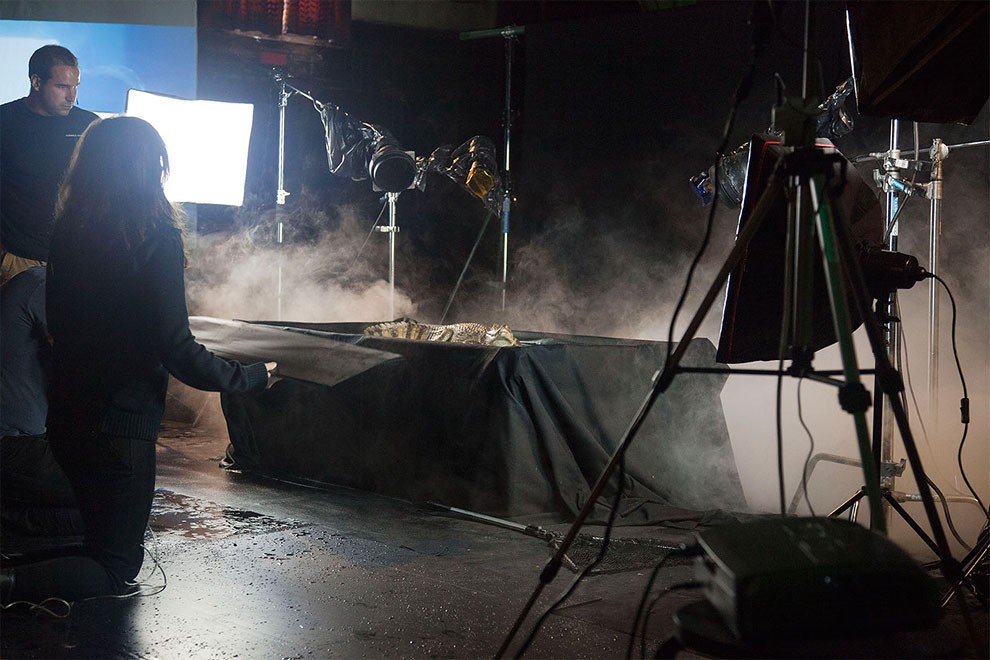 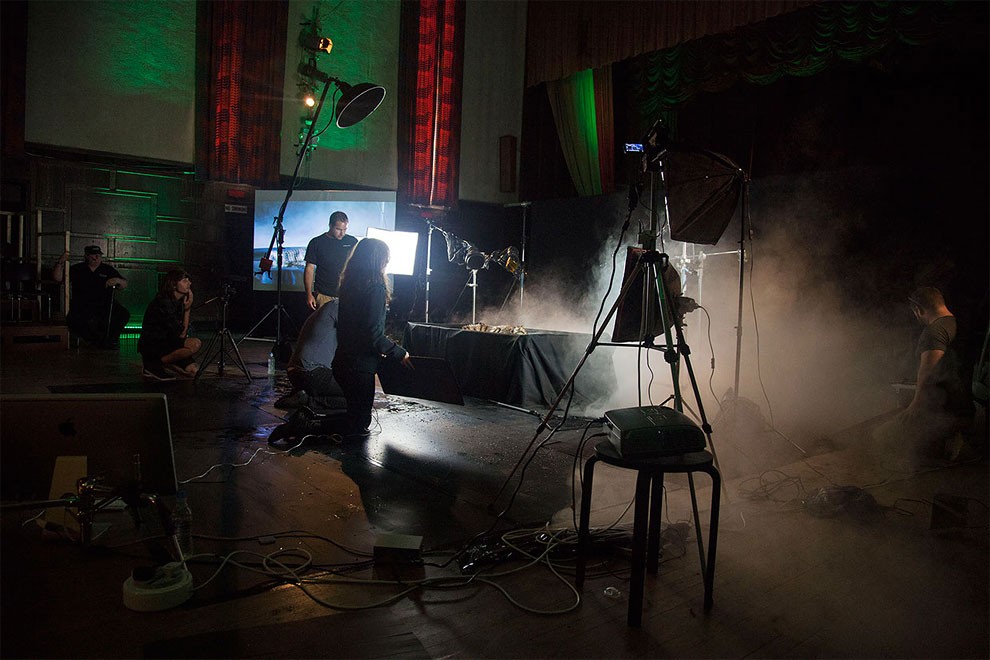 Fascinating Photographs Capture Daily Life In Russia Just After The Collapse Of The Soviet Union
Photo of the Day: Jiff The Dracula
Ukrainian Mum Reveals Her Quintuplets In Heart-Warming Photo Series
This Couple Made The Most Epic Star Wars Engagement Shoot Ever
30 Best Wedding Photos Of FdB Photography Awards
Stunning Black And White Photos Of The Skateboarding In The 1960s
Margarita Nikitaki Takes Claustrophobic Photographs Of Athens’ Cityscapes
Photographer Denis Demkov
Everyday Lives Of Villagers In Indonesia Captured In Heartwarming Photos
Here Are The Winners Of The 2016 iPhone Photography Awards
Gotham 7.5K: A Rare High Altitude Night Flight Above NYC
Cute "Little Monk" in SE China Goes Viral Online
Vintage Photographs Document the Defiant Street Styles Of Swiss Rebel Youth From The Late 1950s Through The '60s
South Korea’s Drive-Ins Offer Respite From Pandemic Drudgery
Space Photos Of The Perseid Meteor Shower Strikes The Sky Around The World
Cyberpunk, Neon And Futuristic Street Photos Of Seoul By Steve Roe
U-118, a World War One Submarine Washed Ashore on the Beach at Hastings, England
Still Life Photographer Creates Epic “Outdoor” Scenes Almost Without Spending Any Money
2020 Miss Mexico Contestants Compete In Traditional Outfits And They Are Amazing
Beautiful Vintage Black And White Photos Of New York City In The Summer Of 1938
The Art Of Natural Environment In Minimalist Photographs By Morgane Erpicum
Teenager Does An “It”-Themed Photoshoot With His Baby Brother, And It Will Give You Nightmares
Photo of the Day: Jenny From The Block
Catholic School Characters By David Stoker
Beaming 93-Year-Old Gleefully Models Granddaughter's Colorful Weavings
Marvelous Portraits Of Beautiful Russian Women By Sergey Shatskov
Parents Trolling Daughter's Photos
Speedo FASTSKIN3
Liverpool In The 1980s: Photographer Dave Sinclair’s Stunning Images Show A City That Refused To Lie Down In The Face Of Adversity
1968: Elton John's First Photo Shoot
absolutely, crocodile, million, photos, stunning, years