Silhouettes Around the World 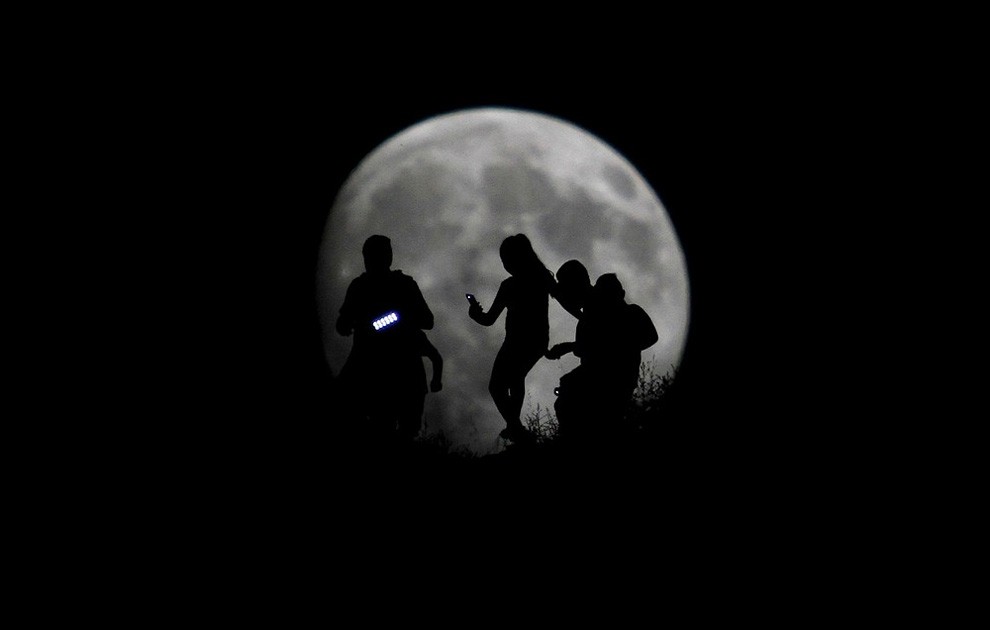 A group of hikers are seen silhouetted against the moon in Tijuana, Mexico, August 27, 2015. (Photo by Jorge Duenes/Reuters) 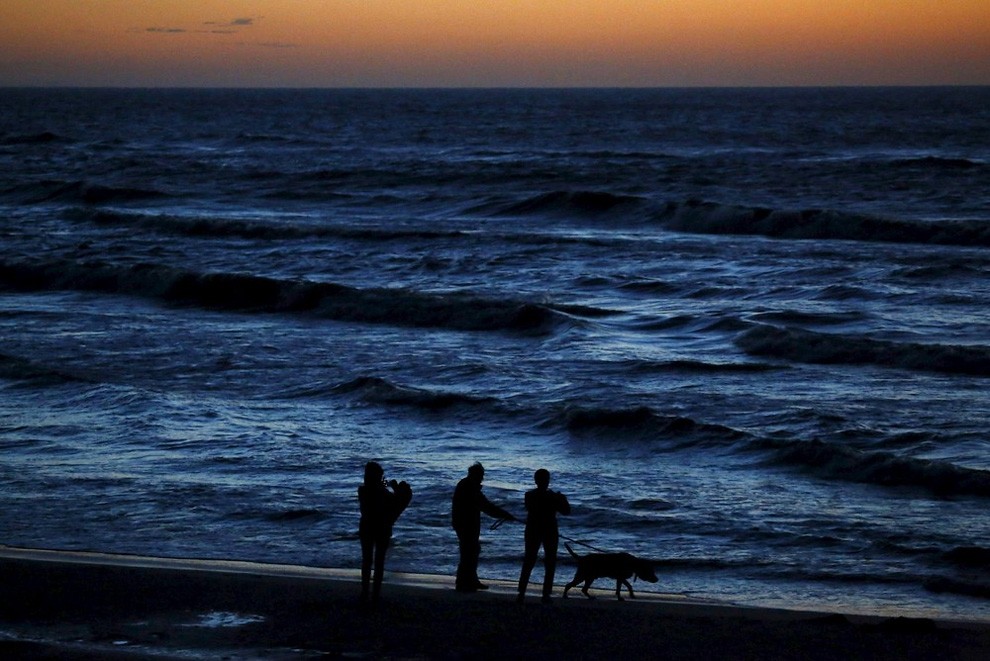 People walk with a dog on the beach after sunset at the Polish Baltic Sea coast near Choczewo, northern Poland August 17, 2015. (Photo by Kacper Pempel/Reuters) 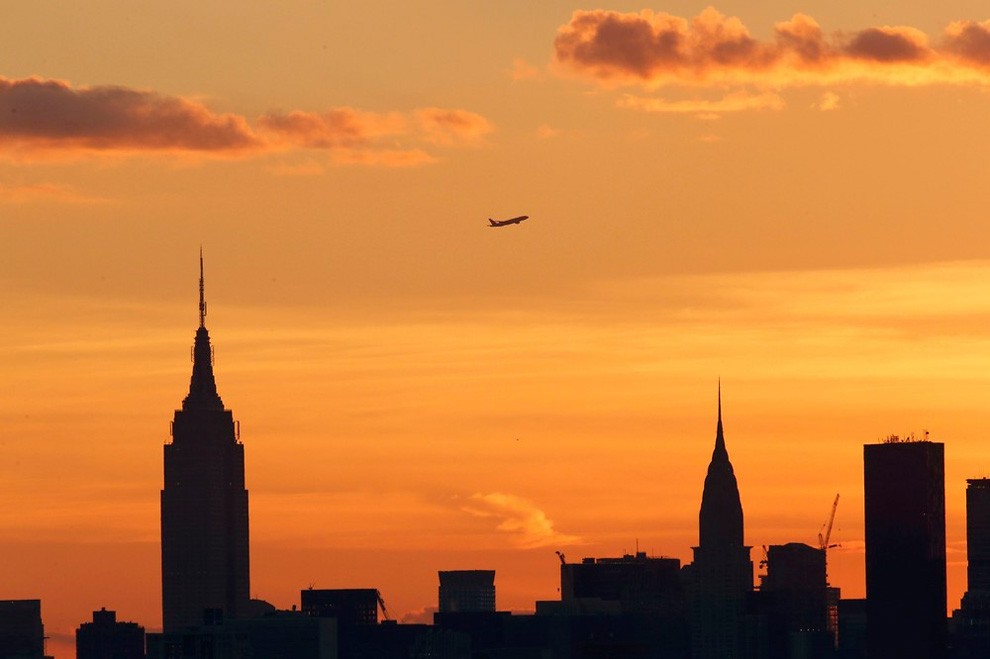 The New York skyline, including the Empire State Building (L) and the Chrysler Building (center, R) is seen at sunset during play at the U.S. Open Championships tennis tournament in New York, September 11, 2015. (Photo by Carlo Allegri/Reuters) 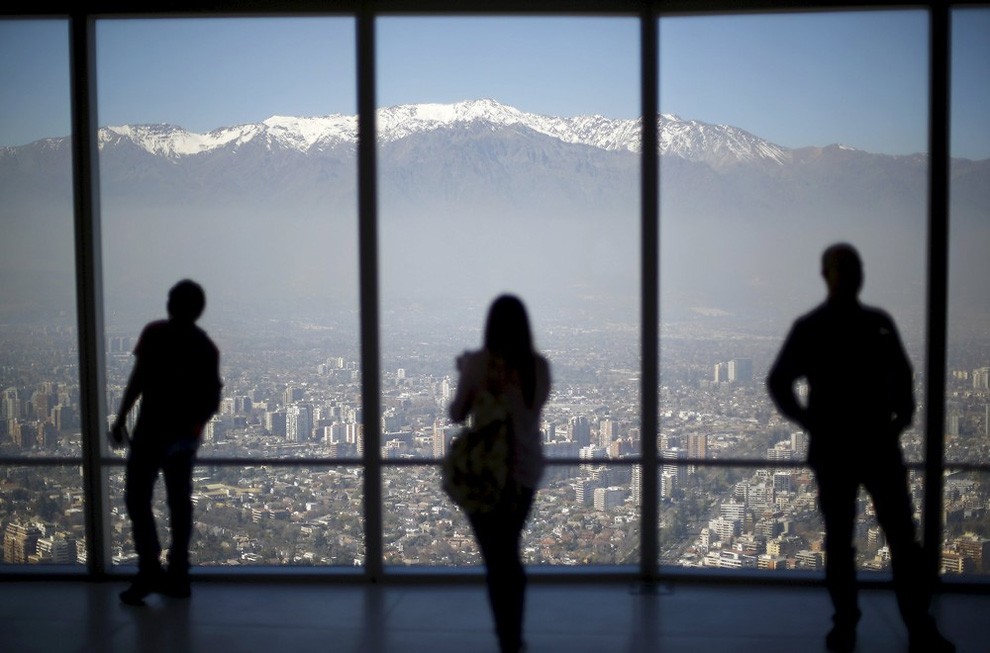 People look out to the Los Andes mountain range next to the city from a rooftop of a commercial center in a business district in Santiago, Chile, September 3, 2015. (Photo by Ivan Alvarado/Reuters)

The New York City skyline is seen at sunset during play at the U.S. Open Championships tennis tournament in New York, September 11, 2015. (Photo by Carlo Allegri/Reuters) 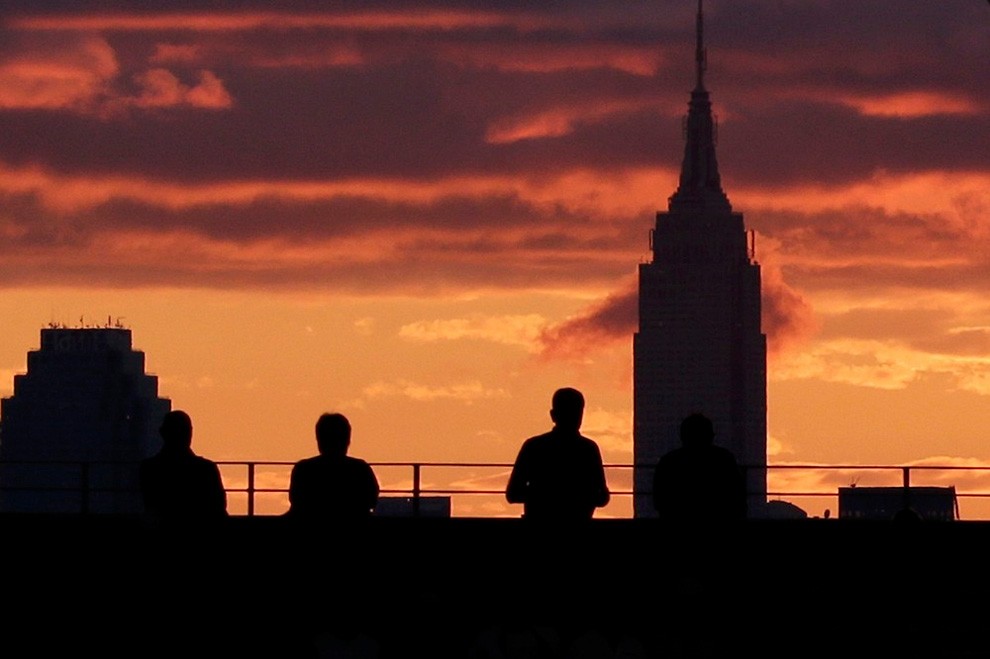 Fans watch the sunset and the Empire State Building (R) from Arthur Ashe Stadium ahead of the mens final between Roger Federer of Switzerland and Novak Djokovic of Serbia at the U.S. Open Championships tennis tournament in New York, September 13, 2015. (Photo by Lucas Jackson/Reuters) 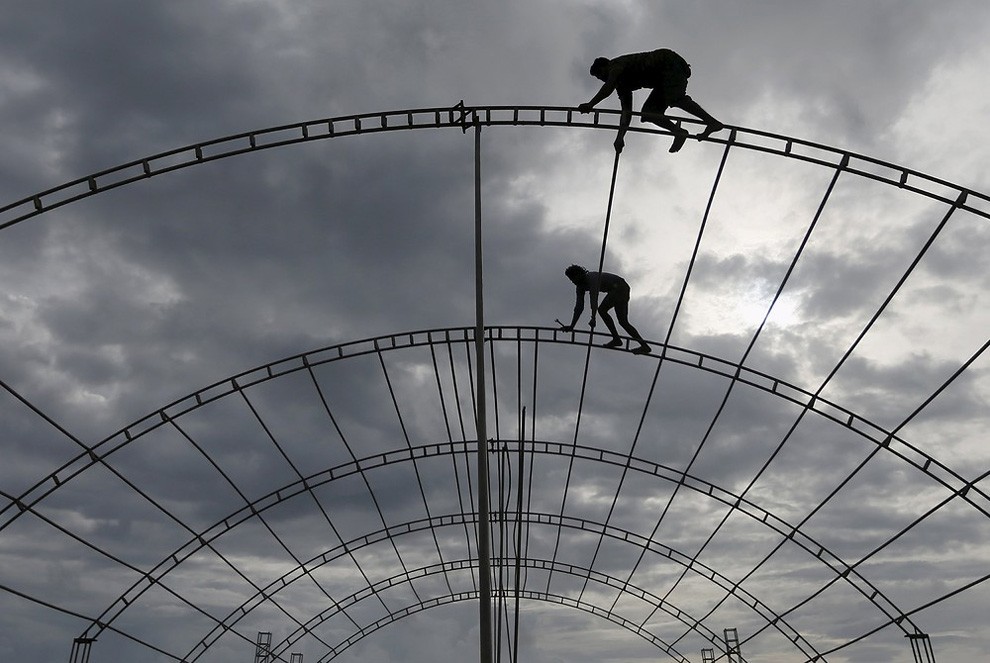 Laborers work on iron poles as while building a stage for a program in Colombo, Sri Lanka September 18, 2015. (Photo by Dinuka Liyanawatte/Reuters) 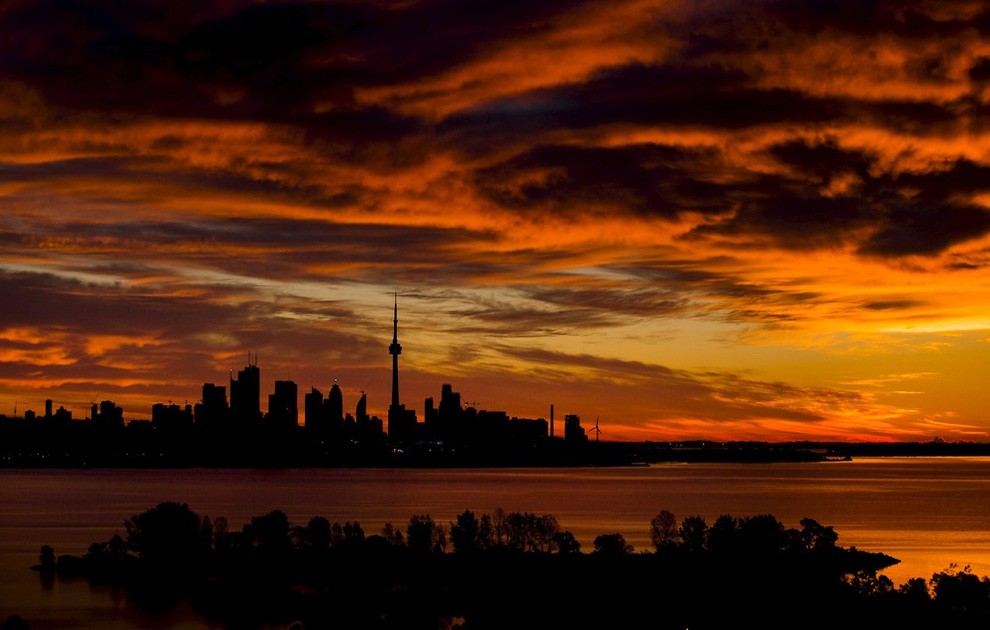 The sun begins to rise over the skyline in Toronto, September 21, 2015. (Photo by Mark Blinch/Reuters) 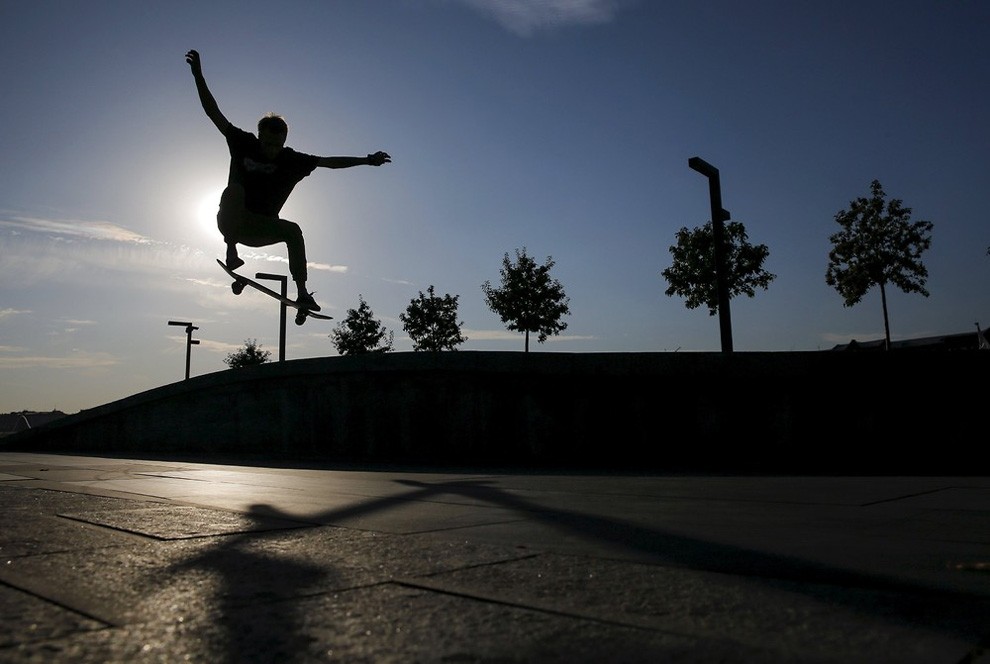 A man skateboards in the evening at the Krymskaya (Crimean) embankment in central Moscow, Russia, September 21, 2015. (Photo by Maxim Shemetov/Reuters) 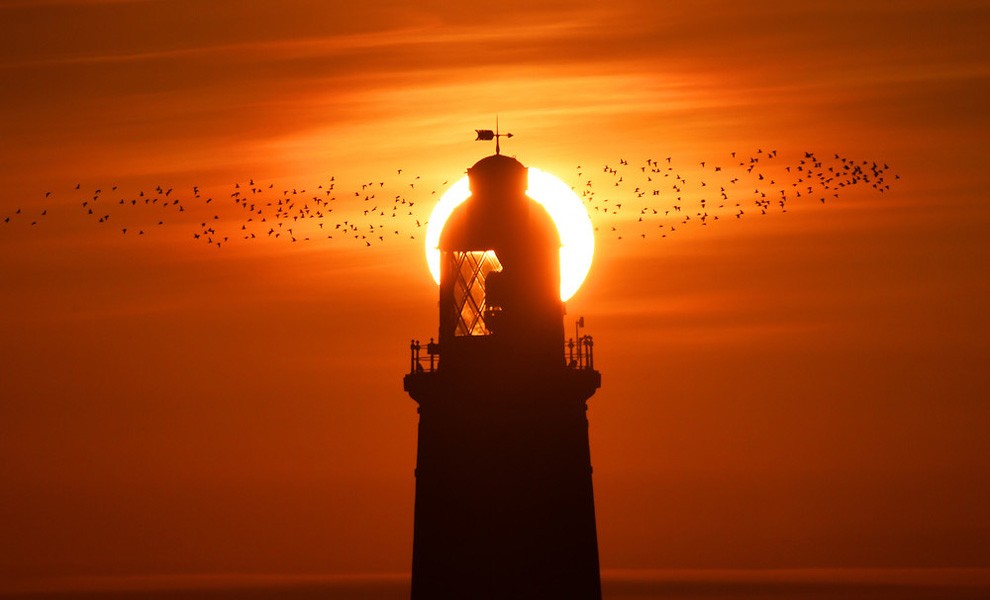 The sun rises over St Mary’s Lighthouse in Whitley Bay on the Northumberland coast as a flock of Lapwing seabirds fly past on Wednesday, September 30, 2015. (Photo by Owen Humphreys/PA Wire) 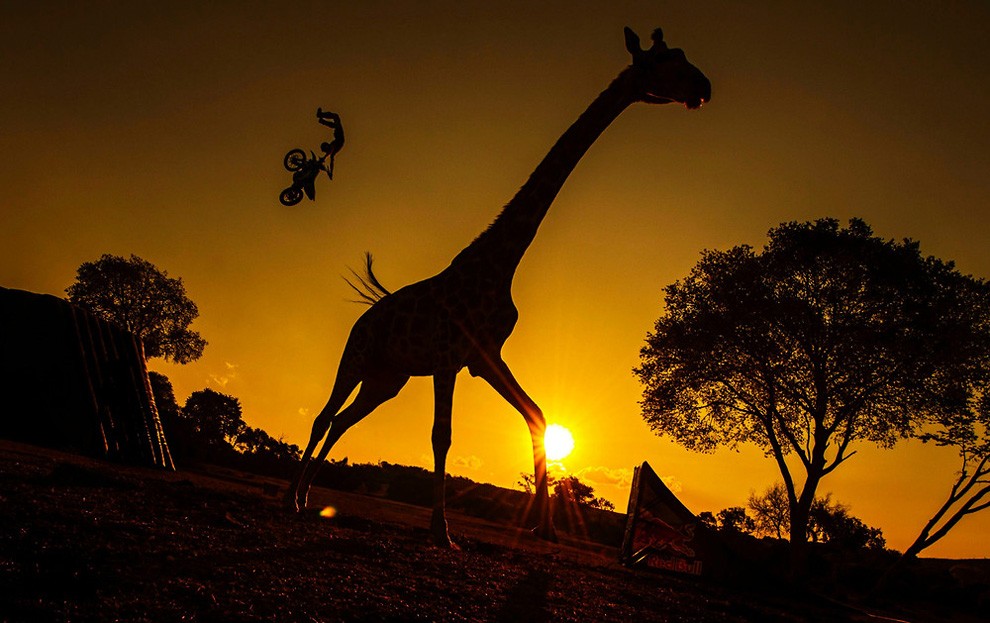 A handout picture made available by Global Newsroom on 10 September 2015 shows French rider Remi Bizouard (back) silhouetted against the sky during a warming up session in the wide-open savanna as a giraffe is seen in the foreground, at the Glen Afric Country Lodge prior to the fourth stage of the Red Bull X-Fighters World Tour in Pretoria, South Africa, 09 September 2015. (Photo by Joerg Mitter/EPA) 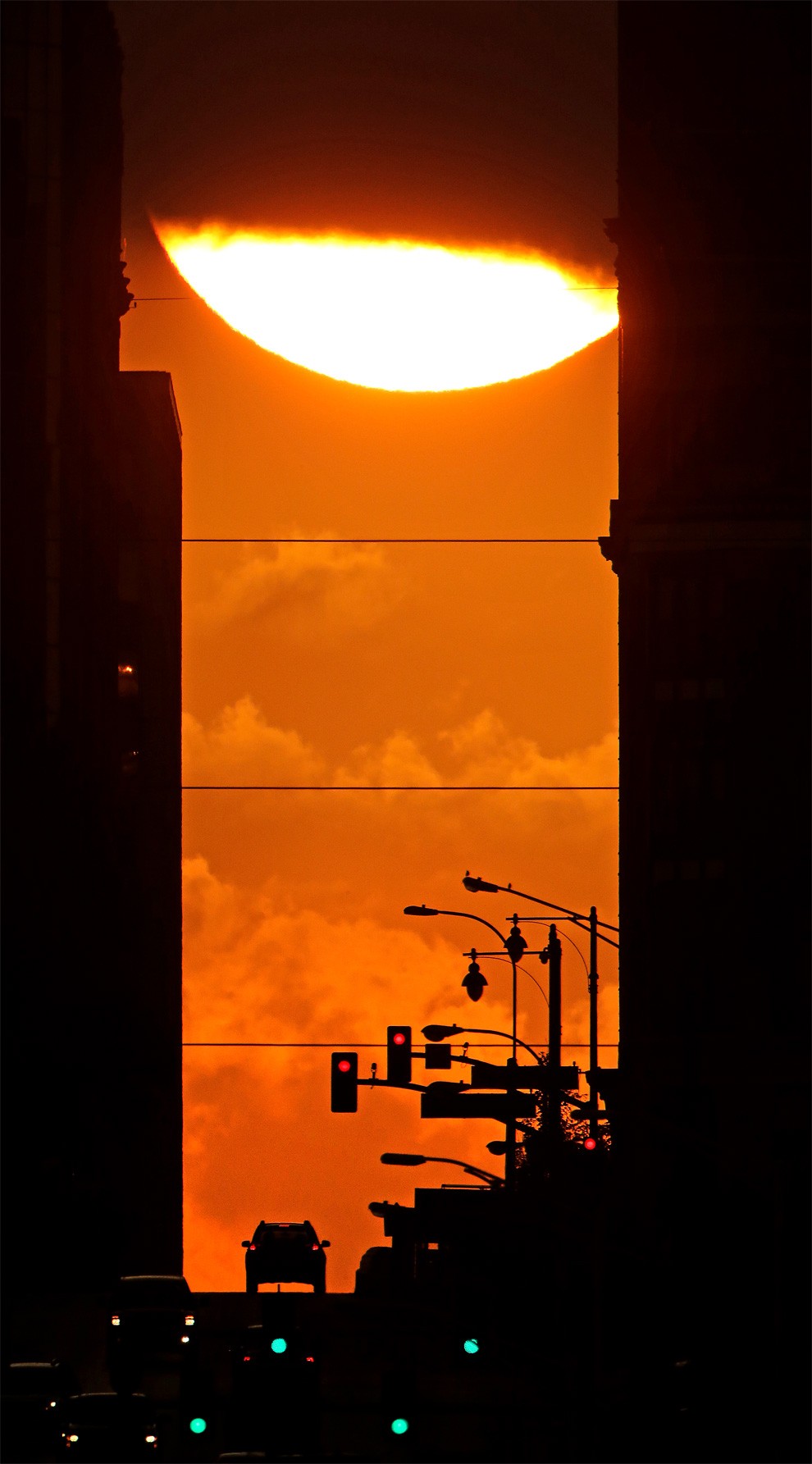 The sun dips behind a cloud as it rises between tall buildings in downtown Kansas City, Mo. Wednesday, September 23, 2015. (Photo by Charlie Riedel/AP Photo) 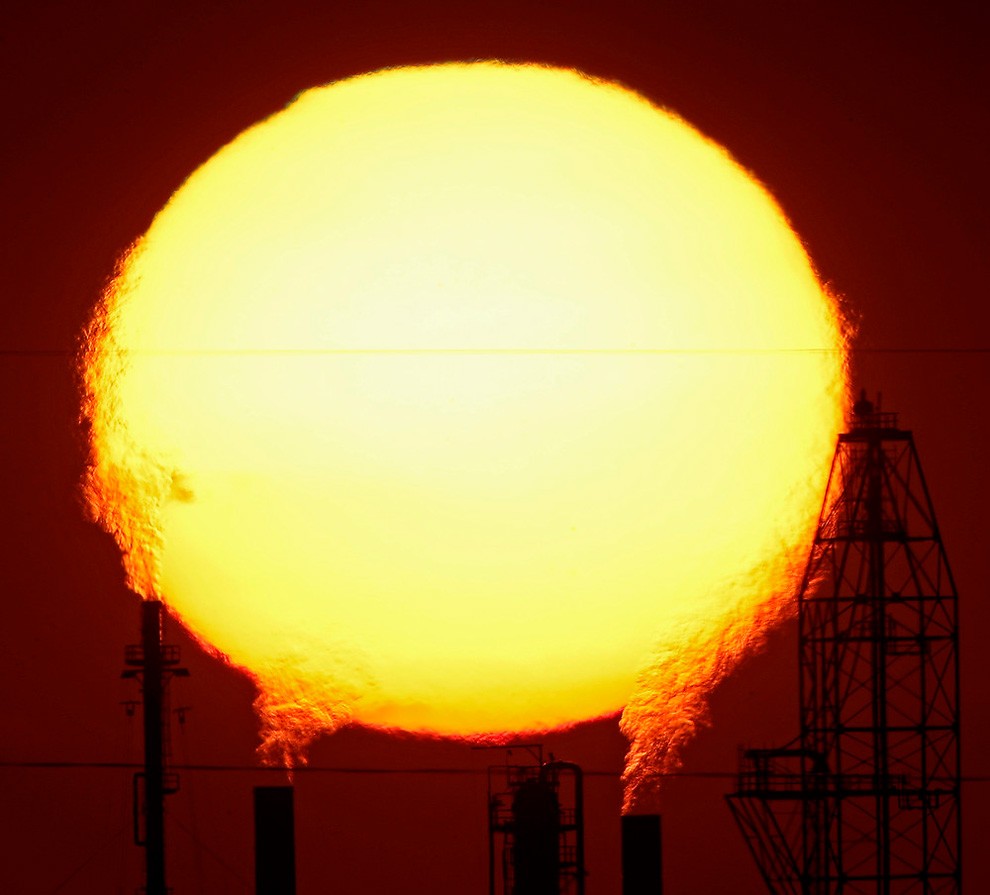 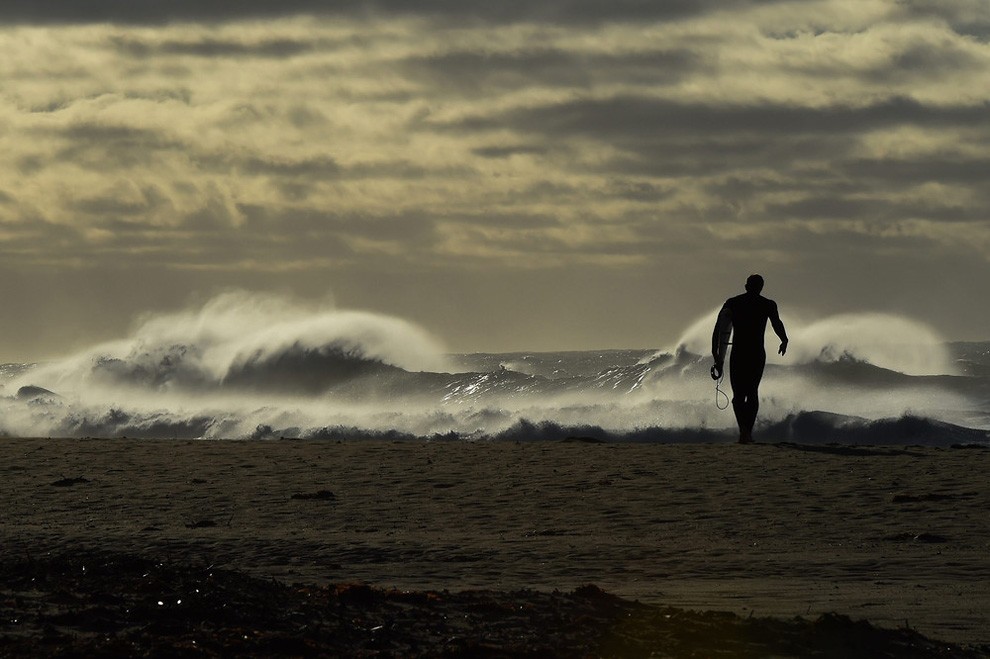 A surfer takes advantage of big swell at as wild weather and big seas continue to batter the Illawarra coastline in Wollongong, south of Sydney, Australia, 25 August 2015. Residents downstream of Jerrara Dam, west of Kiama, have been advised to evacuate as dam failure is imminent. (Photo by Dean Lewins/EPA) 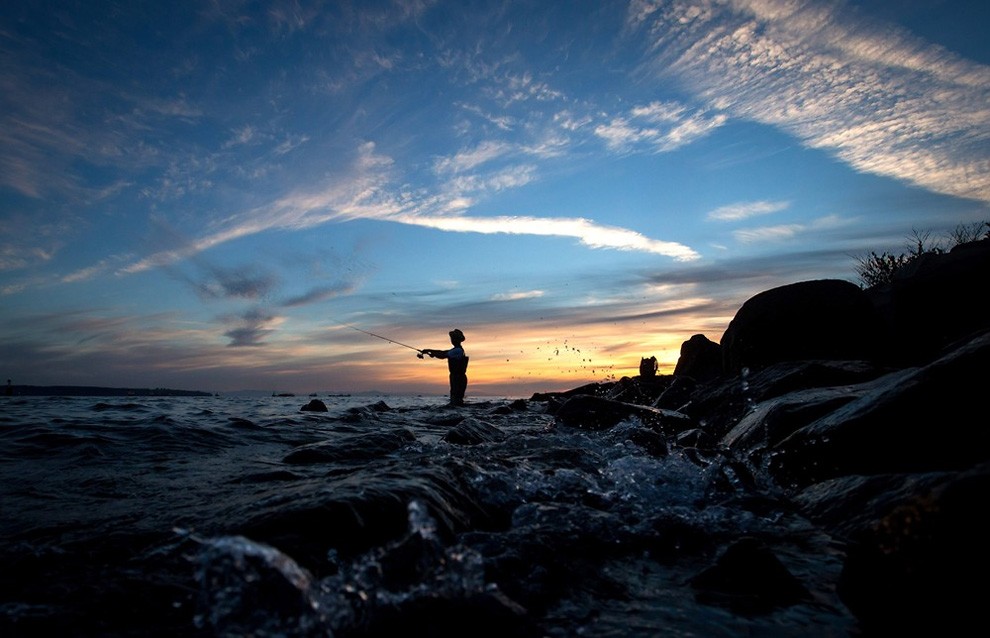 Rick Yen is silhouetted as he casts a rod while fishing for salmon near the mouth of the Capilano River off Ambleside Park at sunset in West Vancouver, British Columbia, Tuesday, August 25, 2015. (Photo by Darryl Dyck/The Canadian Press via AP Photo) 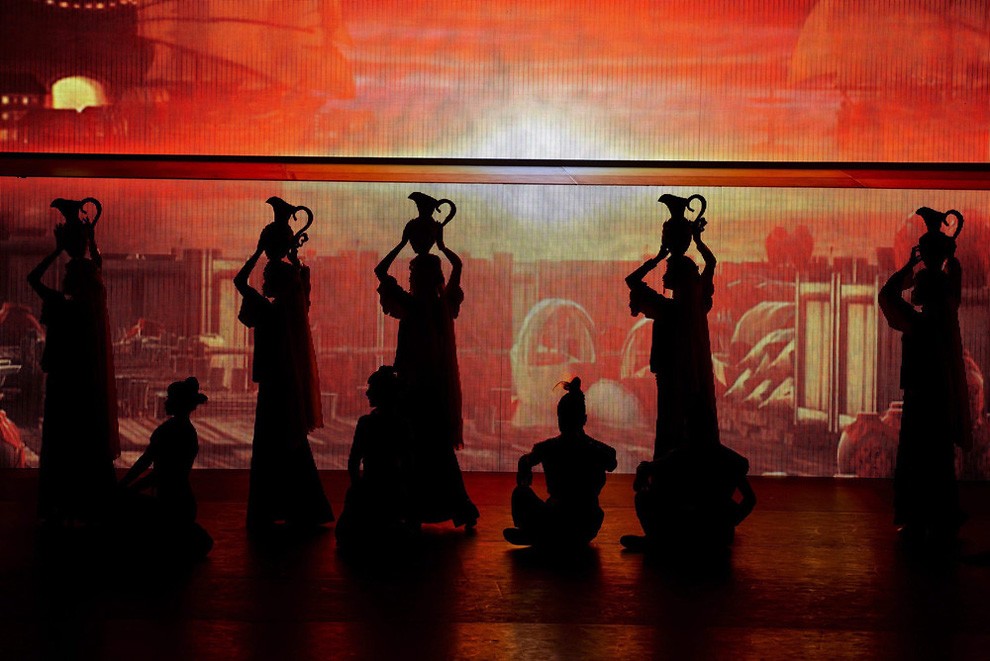 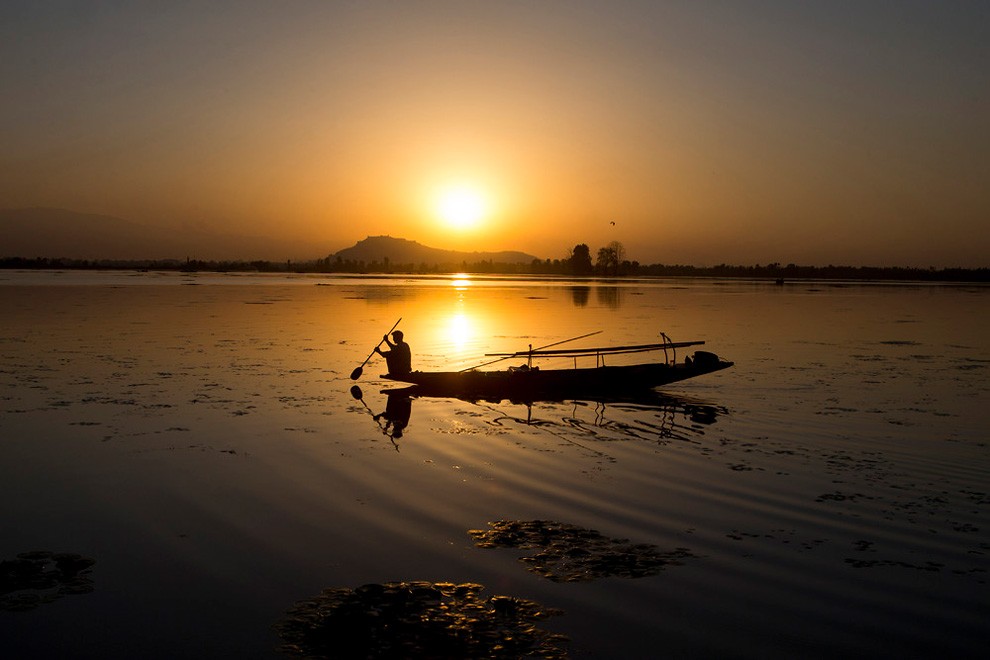 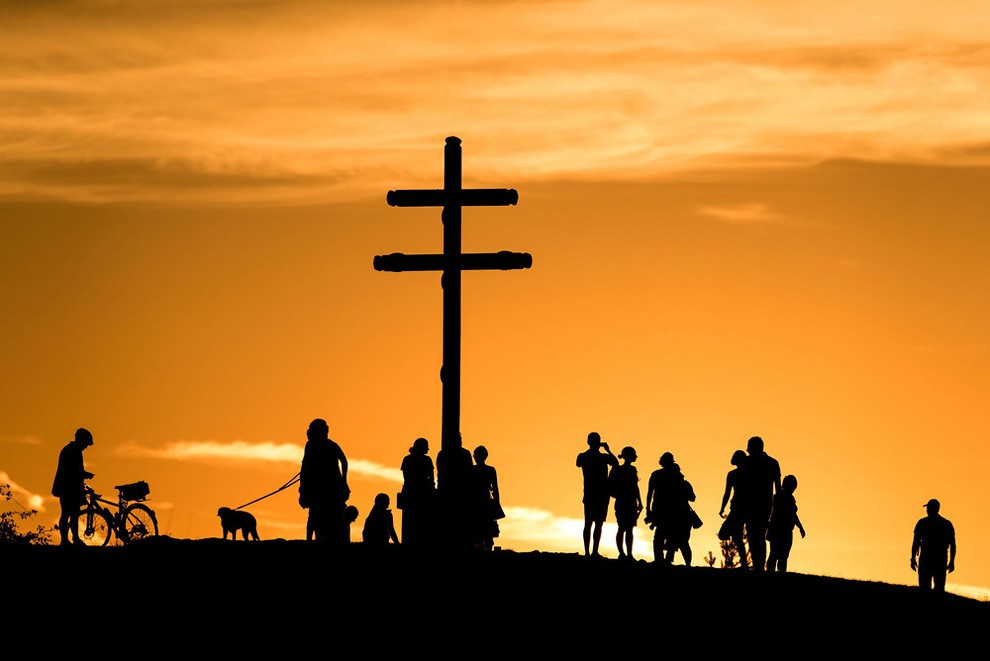 A group of people who strolled to the summit of the Staffelberg, near Bad Staffelstien in Bayern are rewarded with a glowing sunset late 29 August 2015. (Photo by Nicolas Armer/EPA) 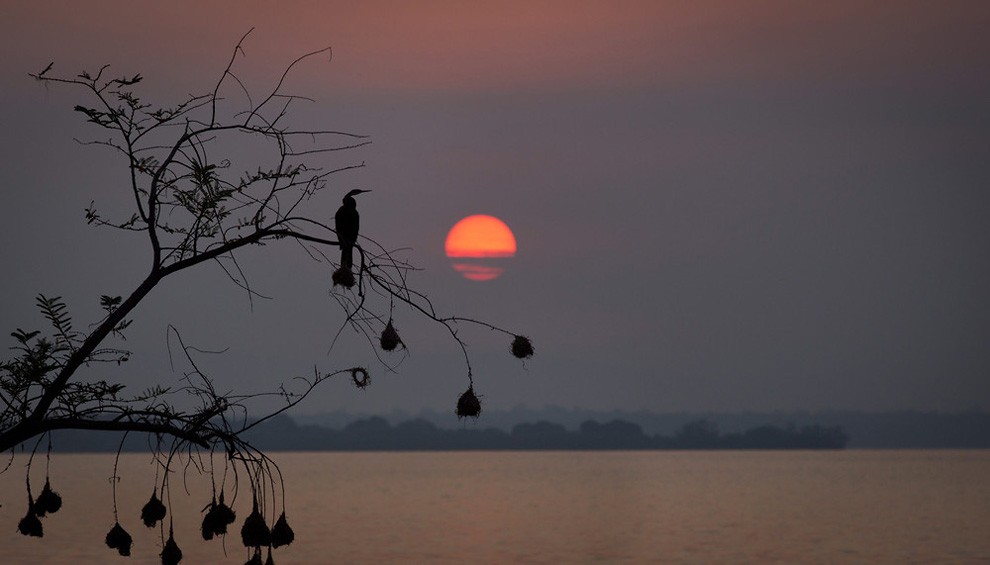 A cormorant perches on a tree, from which hang the nests of weaver birds, as it looks out across Lake Ihema in search of fish to catch at dawn in Akagera National Park, Rwanda Monday, September 7, 2015. (Photo by Ben Curtis/AP Photo) 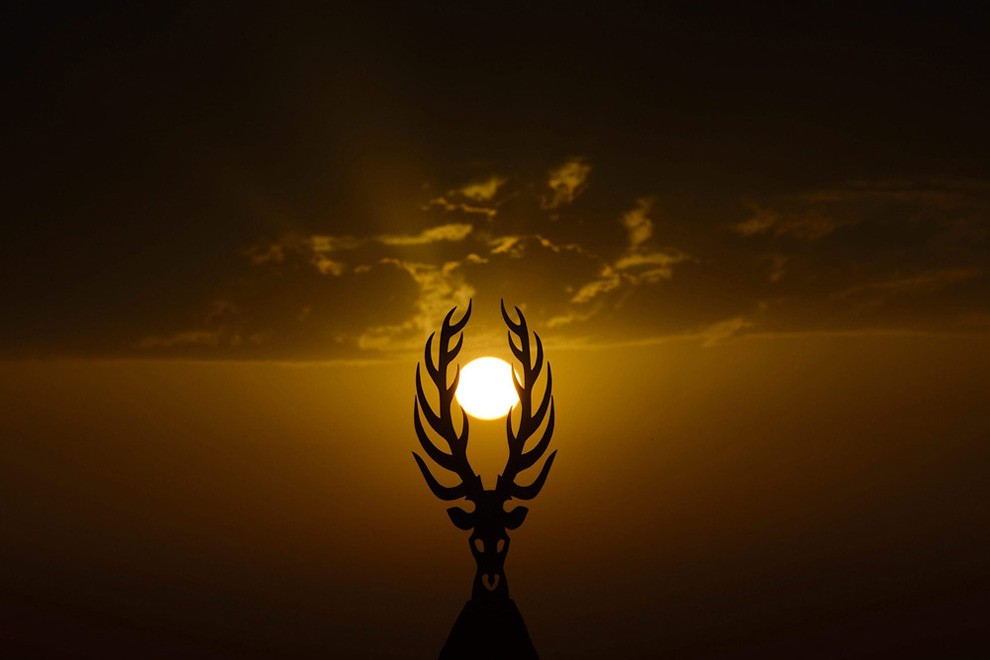 The sun goes down on the monument of a one-time church in the puszta or Hungarian steppe of Hortobagy, 183 kms east of Budapest, Hungary, 19 September 2015. (Photo by Zsolt Czegledi/EPA) 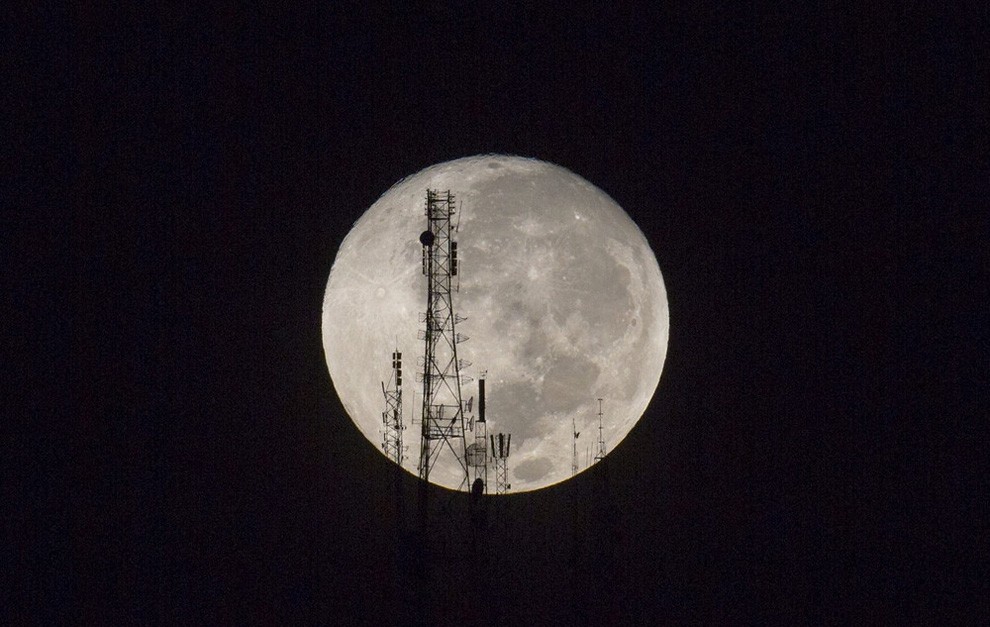 A full moon silhouettes television and radio antennas on Boutilier Mountain, in Port-au-Prince, Haiti, early Sunday September 27, 2015. The full moon was seen prior to a phenomenon called a “Super Moon” eclipse that will occur Sunday night. (Photo by Dieu Nalio Chery/AP Photo) 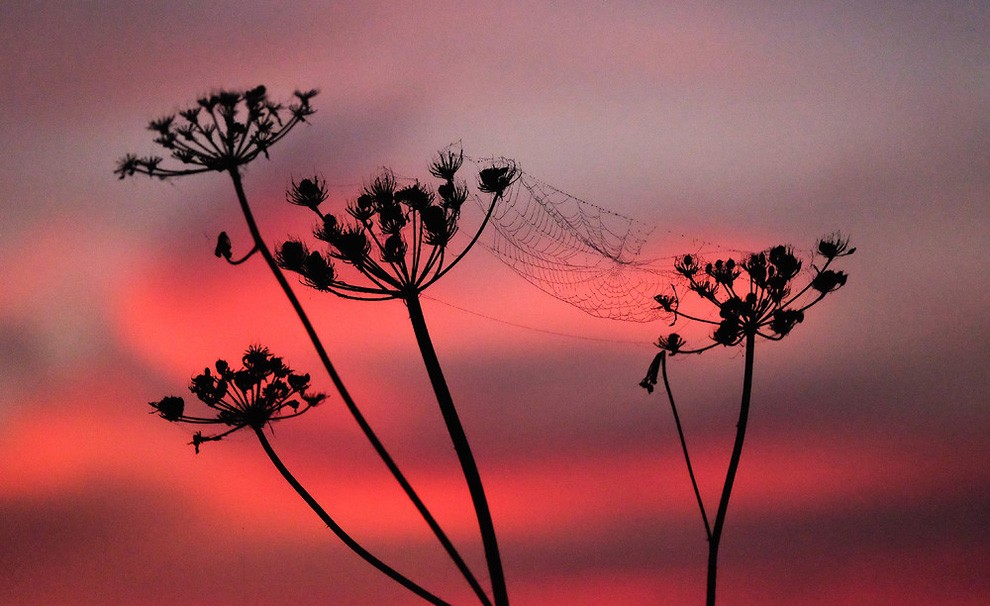 The sun rises over a mist covered area known as South Gare on September 29, 2015 in Redcar, England. (Photo by Ian Forsyth/Getty Images) 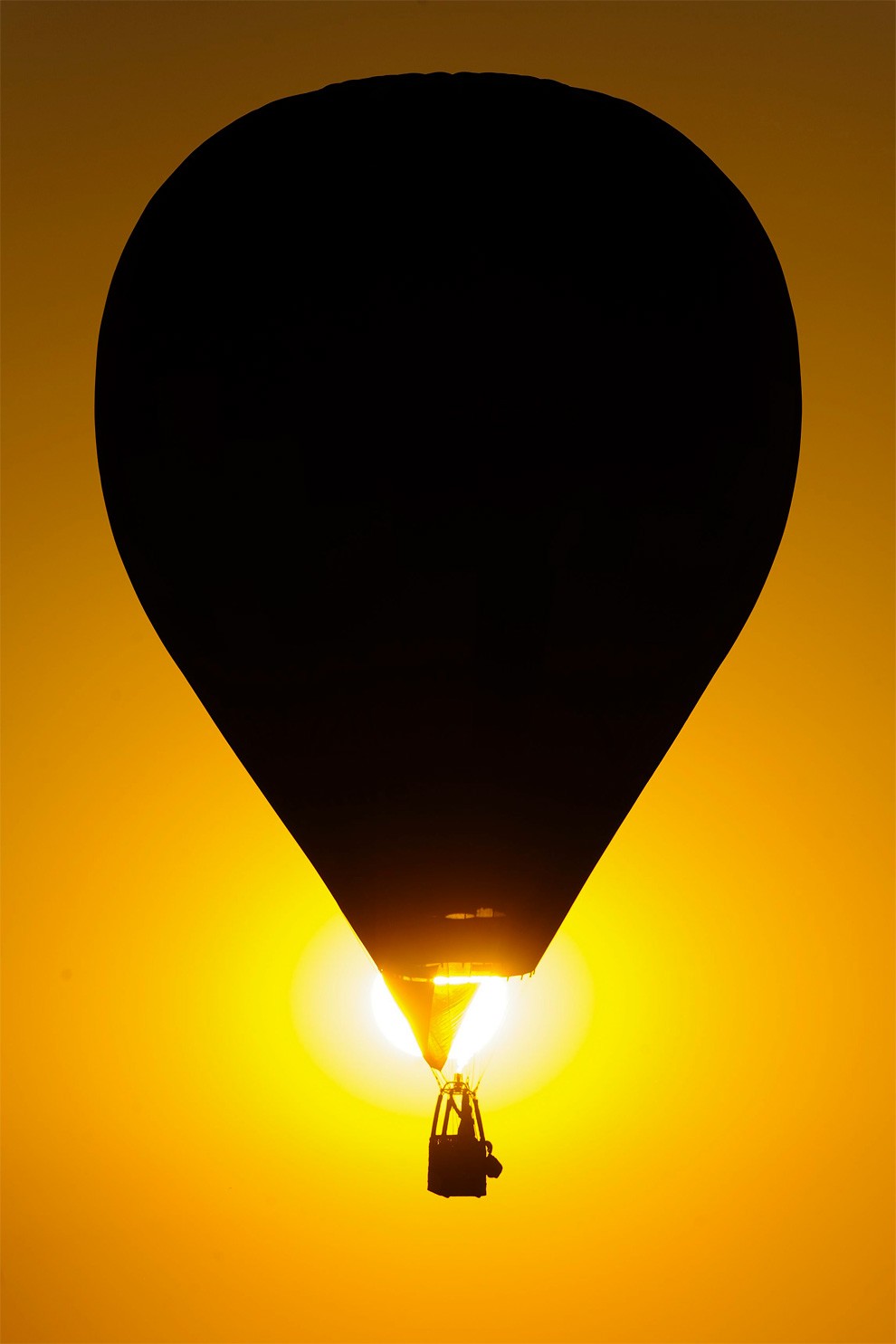 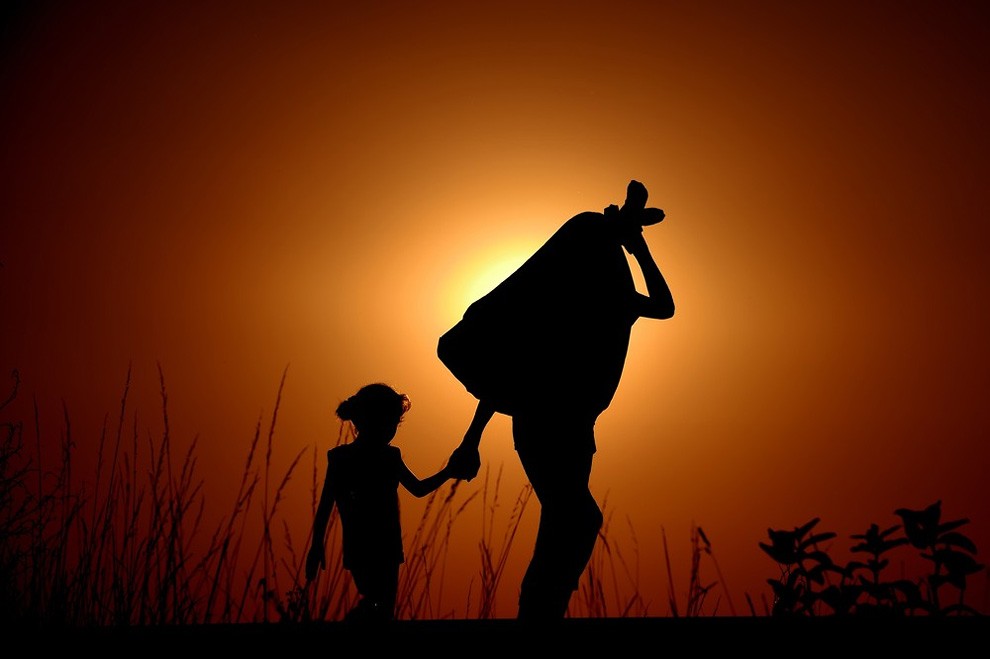 Syrian refugees and migrants along a railway line as they try to cross from Serbia into Hungary near Horgos on September 1, 2015. (Photo by Aris Messinis/AFP Photo)

Inside the McLaren MP4-12C factory
Photographer Andreas Levers Captures The Hazy Glow Of Unpopulated Streets At Night
Alien Landscapes
This Photographer Creates Paintings That Are Actually Photos
Japan Marks First Anniversary of Tōhoku Quake and Tsunami
Photos Of The Europe’s Most Spectacular Car Graveyards As Discovered By Daredevil Outo-Obsessed Explorer
The Deserts Of Argentina Take On A Starring Role In This Photographer’s Breathtaking Milky Way Shots
Don't Look Down: This Collection Of Mind-Boggling Photos Is Sure To Send You Dizzy
Japanese Photographer Makes Absolutely Breathtaking Vacuum-Sealed Wedding Photos
This Wedding Photographer Turns You Into A Miniature Person
Beautiful Photographs of Cheap Motels in 1970s America
These Adventurous Maternity Photos Were Shot At Home With Fruit And Veggies
Portraits of a Baby Boy and Bulldog Who Were Born on the Same Day
Women's Day – Mothers and Daughters
Fantastic Infrared Photography by Oleg Stelmakh
National Geographic: Best Travel Photos Of 2015
Hilarious Winners Of The 2016 Comedy Wildlife Photography Awards
Spectacular Winning Photos of The Ocean Photography Awards 2021
"A Hundred Summers, A Hundred Winters": Dutch Photographer Bertien Van Manen Travels The Far East To Capture 'Dark Times' Of Post-Soviet Russia
Photographer Makes Incredible Macro Shots Of Insects And Wildlife Creatures
"Selfie": Photographer Flora Borsi Photoshops Herself Among A Famous Historical Figures
Mystery Abandoned Hospital in Perrysburg, New York
"Lost In Time": Photographer Goes In Search Of Russia’s Least Known Museums
30 Captivating Historical Photographs Which You Need To See
"The Sound Of Silence": Peaceful Landscapes Photography By Claire Droppert
People Blend Themselves In With Vinyls
Photo of the Day: Wag The Dog
Here Are The 30 Best Photos That NASA’s Curiosity Has Taken After 7 Years On Mars
"Parallel Universes": Dreamy And Surreal Photo Works By Ibai Acevedo
Beautiful Vintage Photographs Of The Peasant Moldovians In The 50-70s: A Unique Photo Archive
around, silhouettes, world